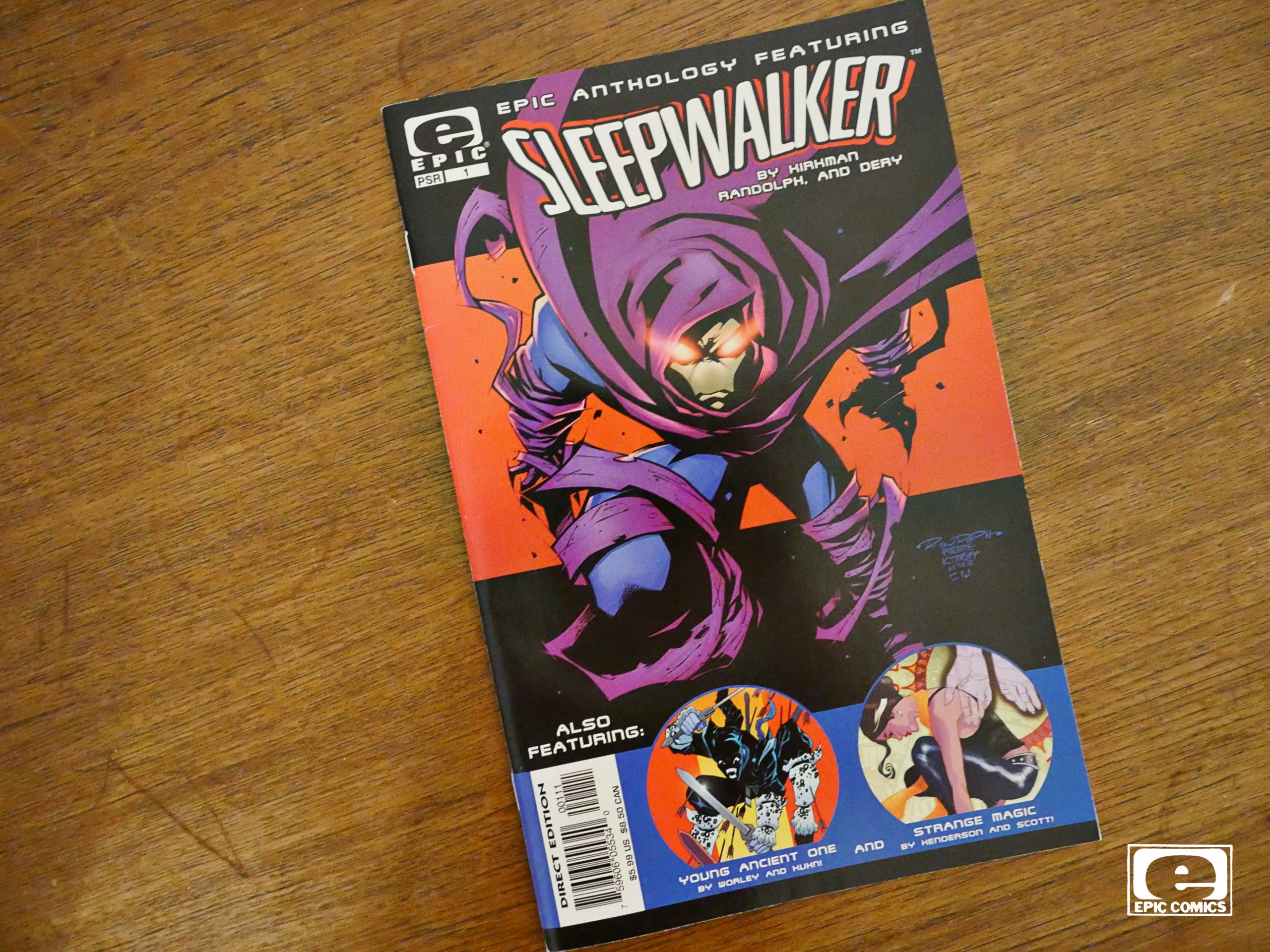 These people, to be precise: 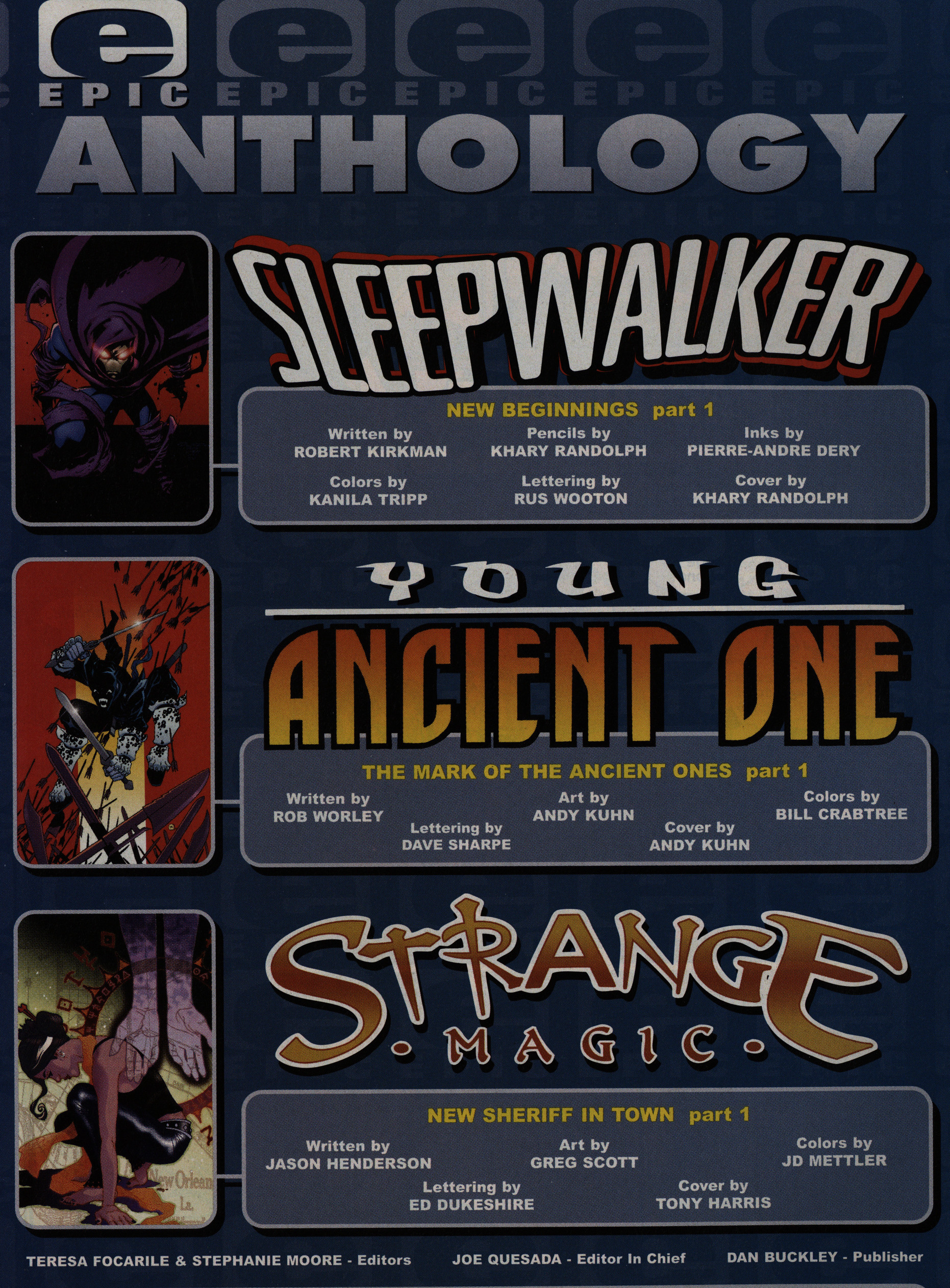 So what is this thing? Bill Jemas, president of Marvel Comics, re-started Epic Comics as a slightly separate thing from Marvel, where young and upcoming artists could pitch series, and Marvel would print them without minimal editorial interference. At least in theory.

Jemas was fired, and Epic was shut down. But they had a bunch of series in the pipeline, apparently, and this 72-page (very unusual number of pages for a floppy comic) book prints the first issue of three of these series. At least, that’s what I’m guessing — the book itself doesn’t say anything about anything. 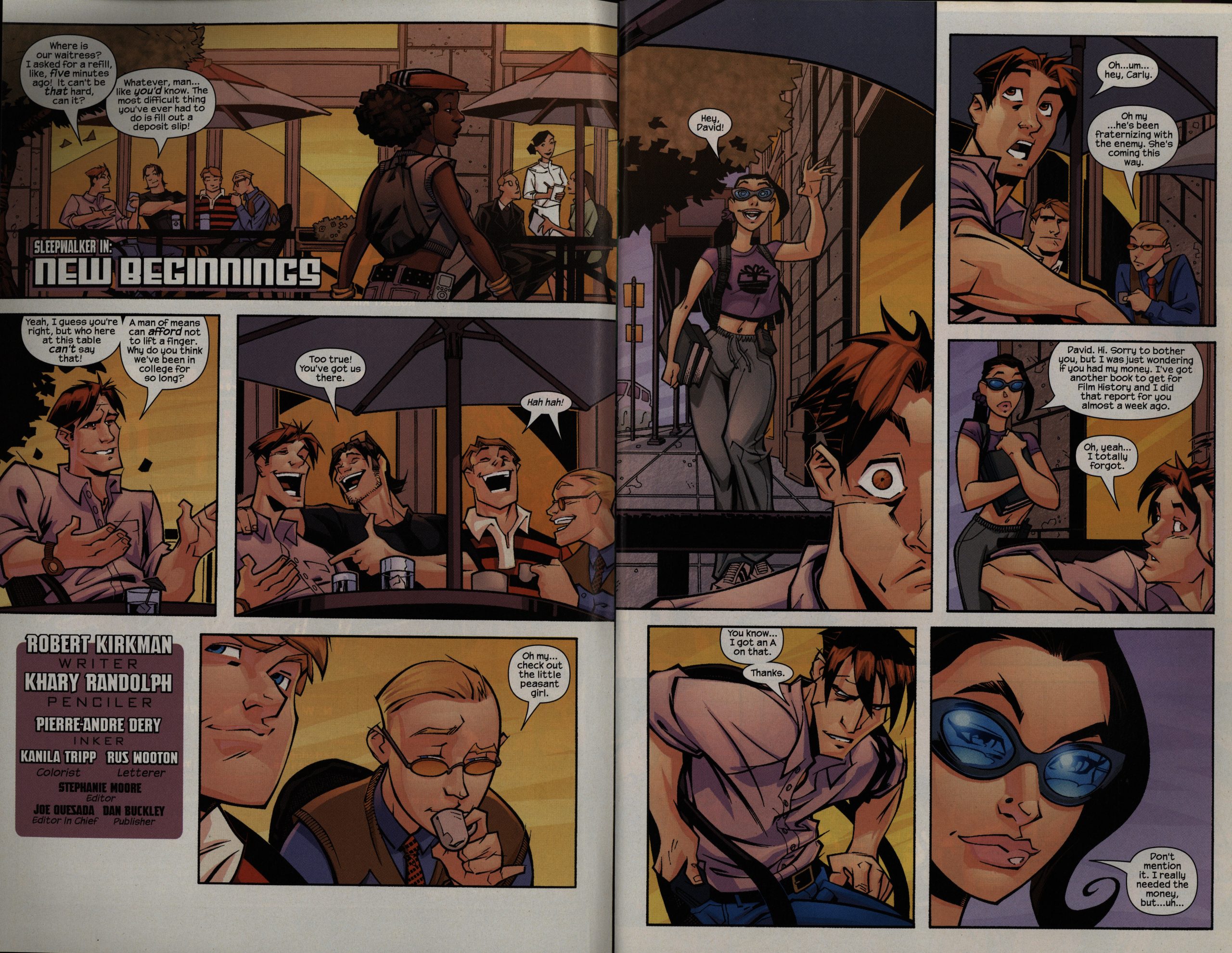 But we get three ~24-page stories that all read like the first issue of a new series, do I don’t think my guess can be that far off. You may either think it’s great that Marvel wouldn’t just leave these things to collect dust in a corner… or you may think it’s pretty shitty to make readers pay for something like this without warning them about what it is.

Anyway, Robert Kirkman (who’s a superstar now, of course) does this thing about a douche-bag college student… 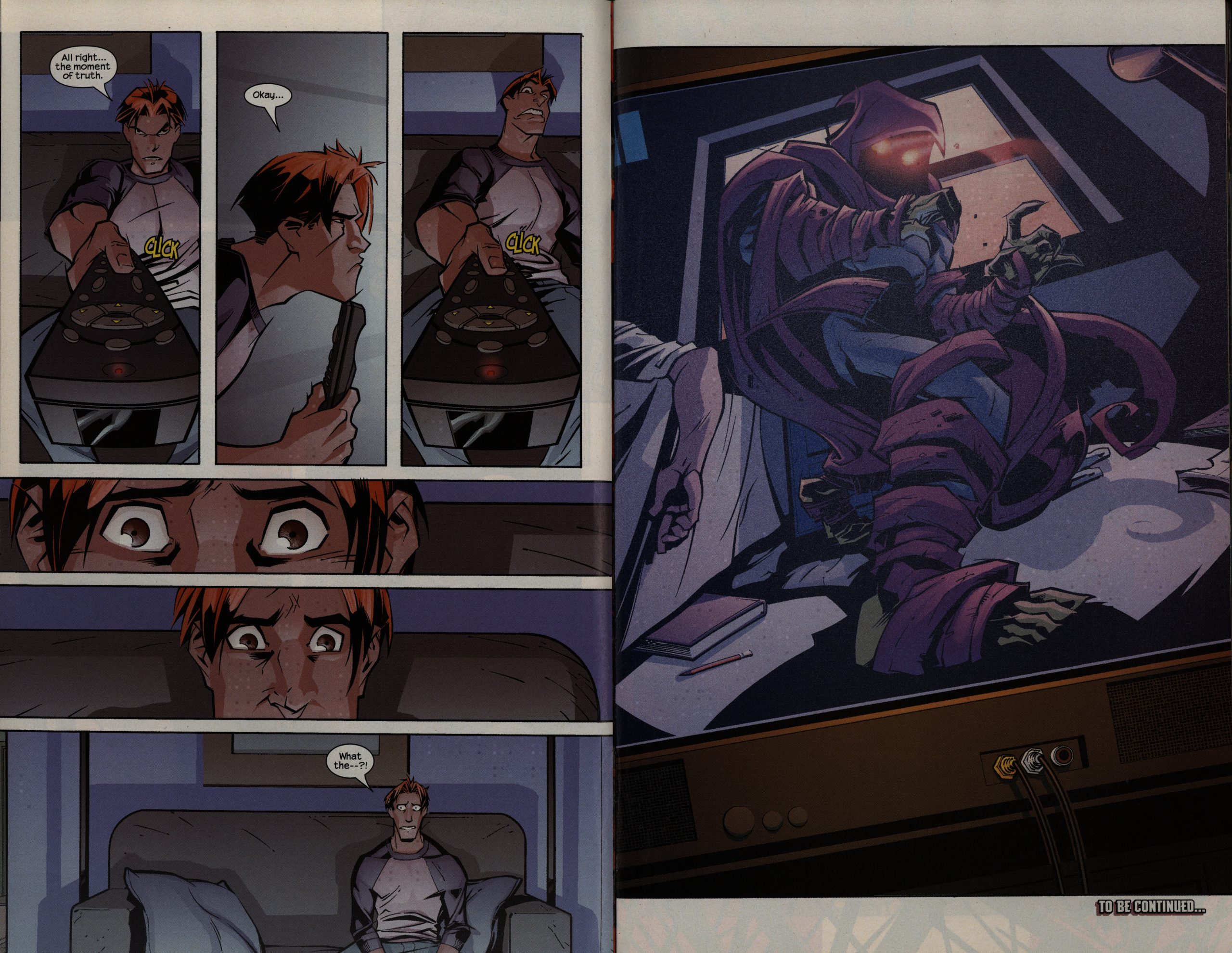 … why turns out to have something to do with the guy above? (Who is presumably called “Sleepwalker”.) As first issues of a new series go, it’s a really entertaining read. The douche-bag turns out to be slightly less annoying than expected, and there’s other interesting characters. It’s fun! It’s not a series that I would read myself, but the artwork is solid and dynamic in that early-2000s way. 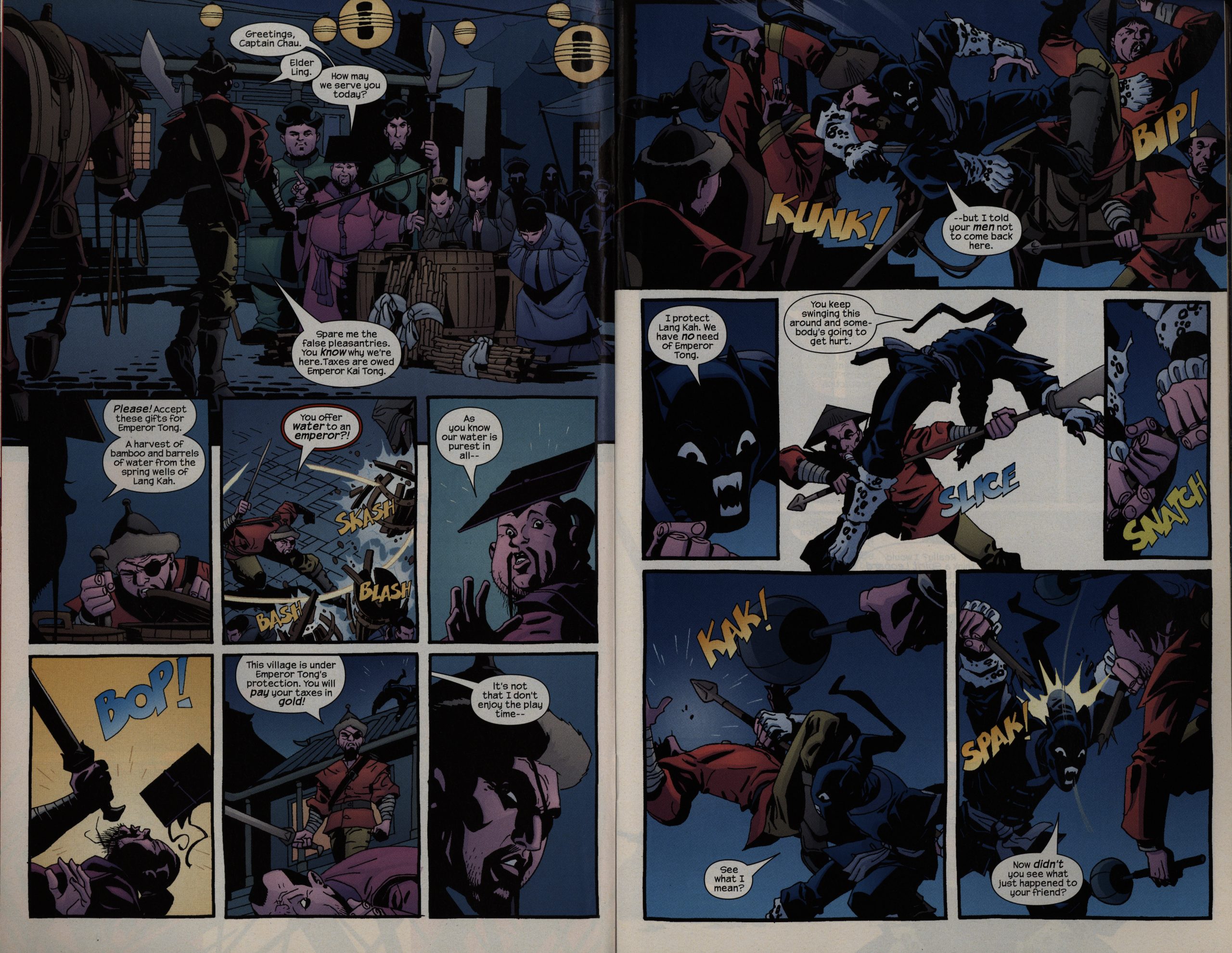 The second first issue is about a martial arts do-gooder back in ye olden dayes; “Young Ancient One”. Above we have him dealing out some justice to some bad guys. 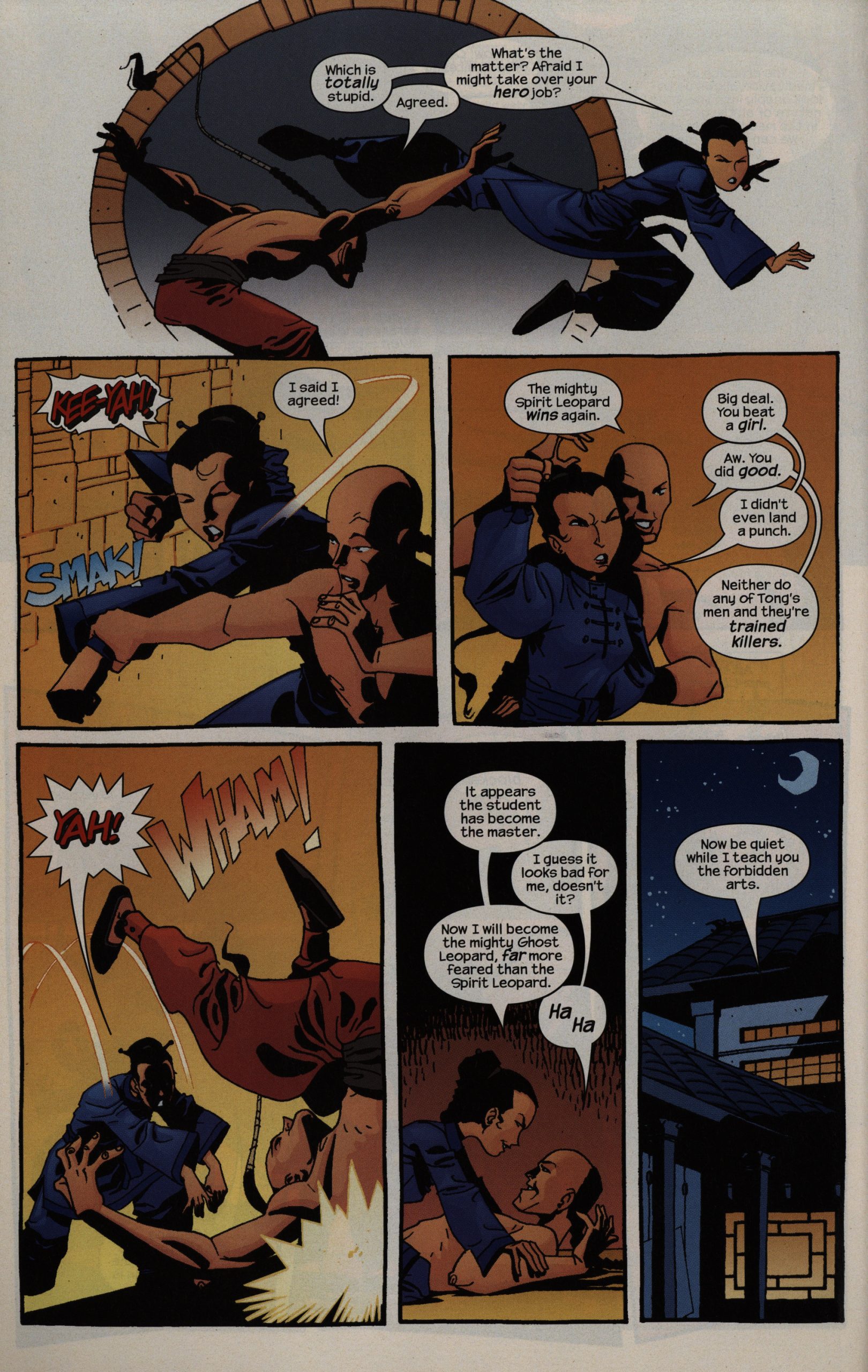 It’s got a light touch… it’s like reading a 70s Spider-Man book, only with KEE-YAH! And I mean that in a positive way — the patter is pretty entertaining and the characters seem to be developing well. 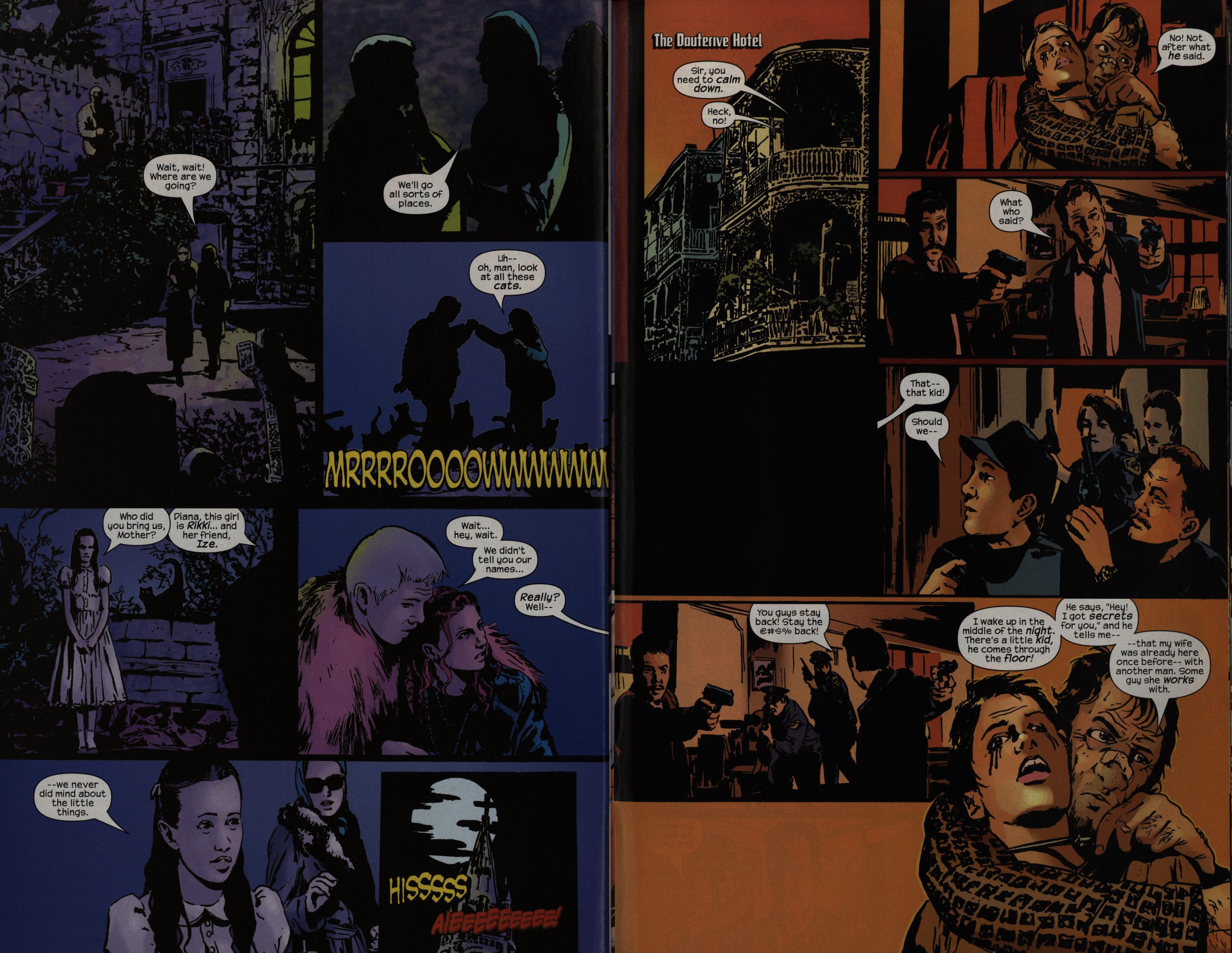 Strange Magic is the odd one out here. It’s about… er… It’s often hard to tell what information we’re supposed to glean from these pages. 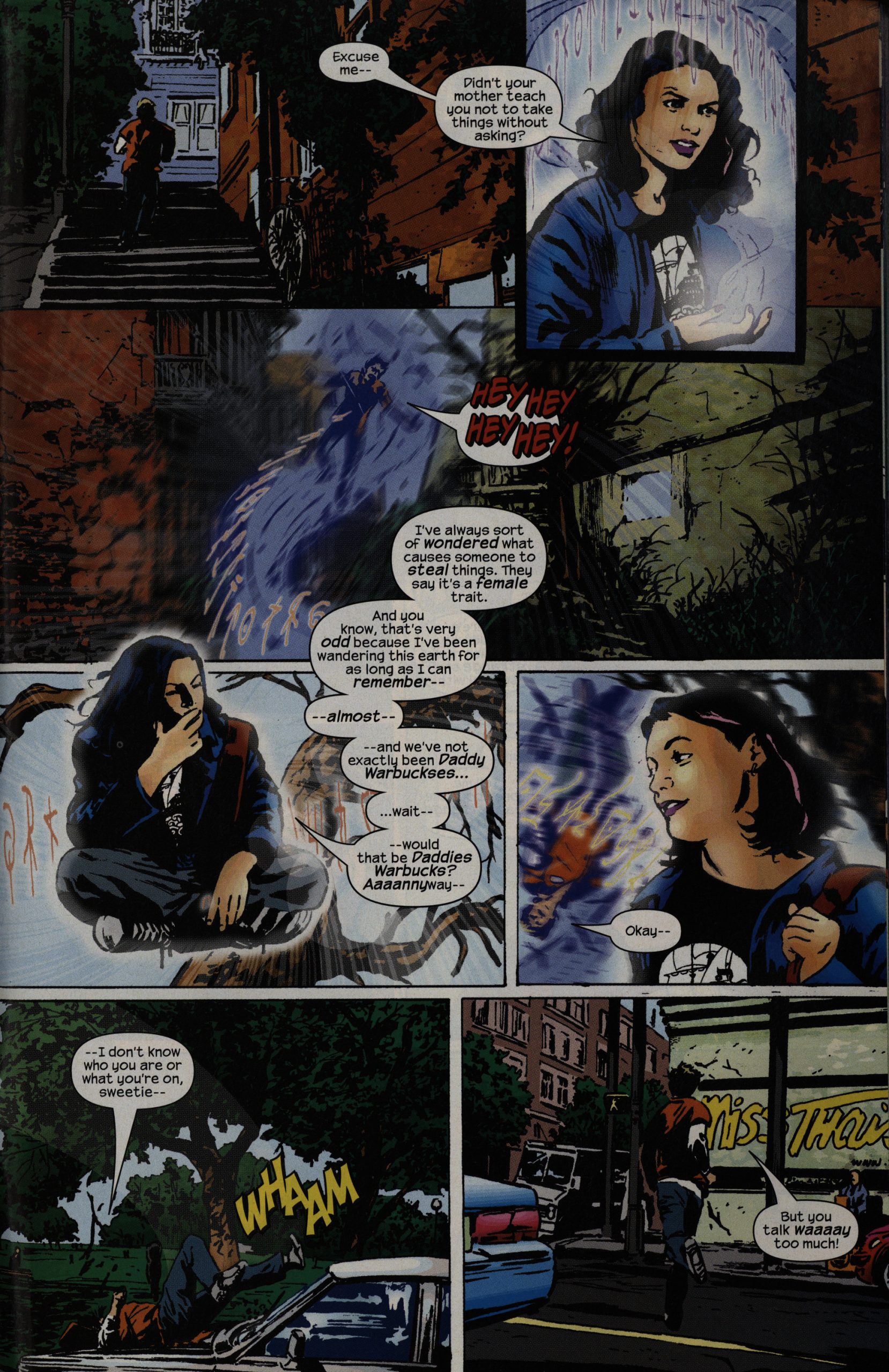 But it’s about a sorceress (last name “Strange”, so she’s a relation to the doctor?) who’s apparently going to fight crime and monsters in New Orleans. The storytelling is choppy as fuck and the artwork seems very photo-referential. 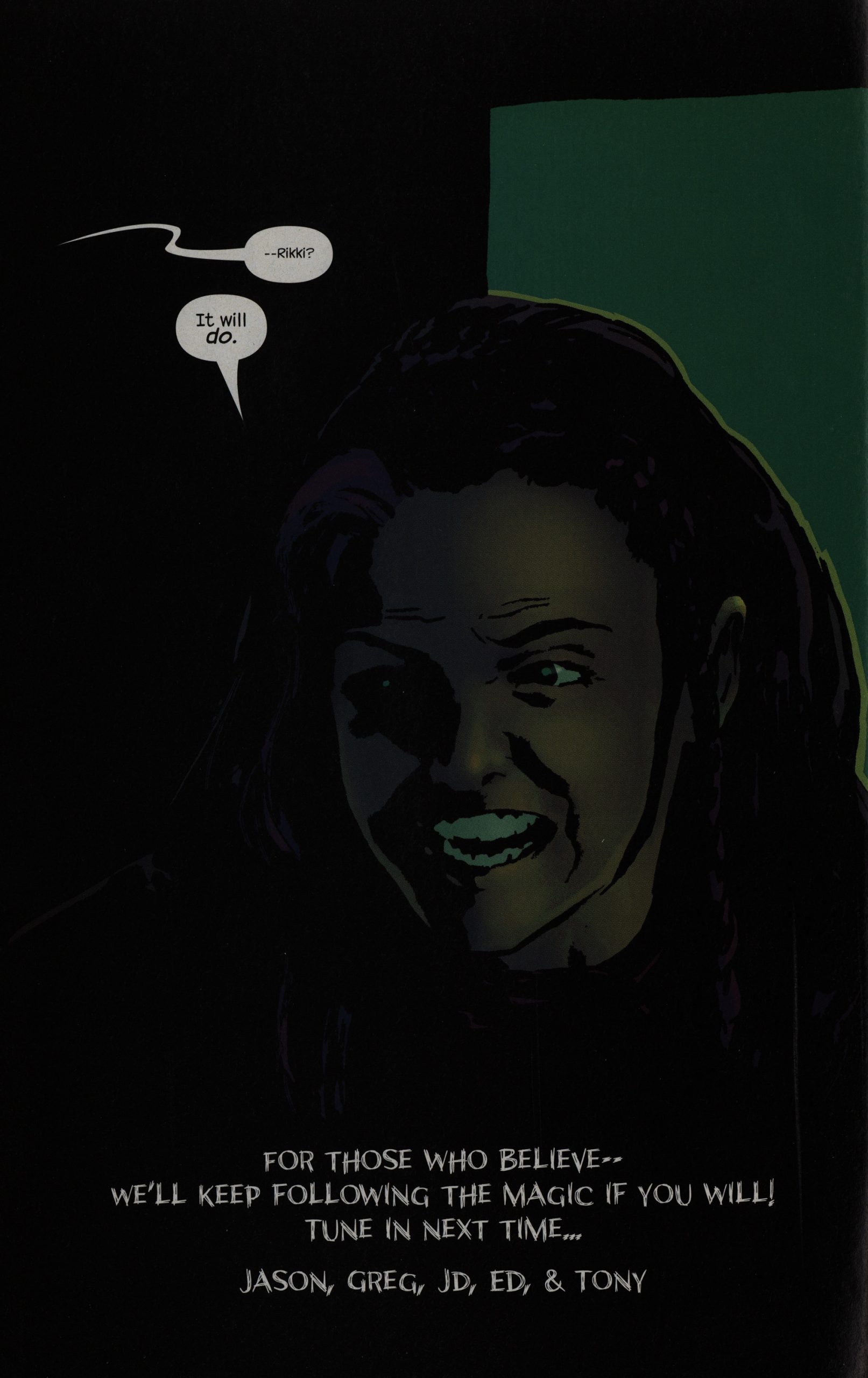 And they seem to know that they were cancelled when they did the final page?

I had no idea:

Sleepwalker is a fictional character appearing in American comic books published by Marvel Comics. Created by Bob Budiansky and Bret Blevins, he first appeared in Sleepwalker #1 (June 1991). He is named after his race, and is the star of a self-titled comic book which ran for 33 issues from June 1991 to February 1994, with one Holiday Special.

A second Sleepwalker character was planned to receive a self-titled series by Robert Kirkman in 2004 but instead debuted in the 2004 Epic Anthology, which was canceled after one issue.

The “no editorial messing about” thing seemed to be more theory than actuality:

The process Kirkman went through to get in the door at Marvel to pitch “Sleepwalker” and finally get it slotted into their publishing plans was a long and arduous one, but ultimately the writer is excited about the opportunity and looking forward to seeing the book in comic shops this February.
Page 6

“The book that I pitched was a bit more action packed and a bit more ambitious in scope,” admitted Kirkman. “Stephanie Moore (the editor) asked that I focus more on David and make things more human and relatable, which I whole heartedly agreed with. I always dreaded working with an editor. I started in self-publishing on my book ‘Battle Pope’ and I’ve been at Image for almost two years just running wild without any editorial interference and I honestly expected it to be a problem. The thing is, most everything Stephanie suggested really made sense and I felt bad for not thinking of it myself. Besides, I can always go back and do what I originally wanted later when she’s not paying attention. You think she’ll read this?

“Now, I will say it took a while to get a final draft of the first issue approved and I never want to go through that again. I think it all turned out for the better in the end.

As for Young Ancient One:

“Very quickly I had written a one-shot script, which is what Marvel wasasking for in the Epic submissions guidelines. The script was totallykick-ass and a sure-fire green light, or so I thought.

“Well, Marvel didn’t green light that script. But they did see potentialand thought I was off to a good start. The Epic editors, Stephanie Mooreand Teresa Focarile, as well as Bill Jemas and Joe Quesada worked with meto identify the strengths and weaknesses of what I had written. As aresult, I was able to expand on the story and add some depth and humor andemotional components that weren’t in the original.

It appears a longtime “Dr. Strange” writer is picking up the thread that I started a few years back with “Young Ancient One”.

After Henderson and Scott sent the pitch to Stephanie Moore and Bill Jemas, Marvel dovetailed it in their relaunch of the Epic Comics imprint, meant to let lesser-known creators work on a stable of established Marvel characters, giving them a new spin and then moving them to the mainstream line of comics if they became successful enough. After Marvel had an ownership change, the launch of Epic Comics’ three titles Sleepwalker, Young Ancient One and Strange Magic was cancelled and they were instead released together as an anthology book, but it was cancelled after one issue

So was Epic Anthology really planned as a series, or was that just something Marvel said at the time?

Anyway, this is the very final thing Marvel published under the “Epic” label (until they started using the logo for the “Epic Collections”: 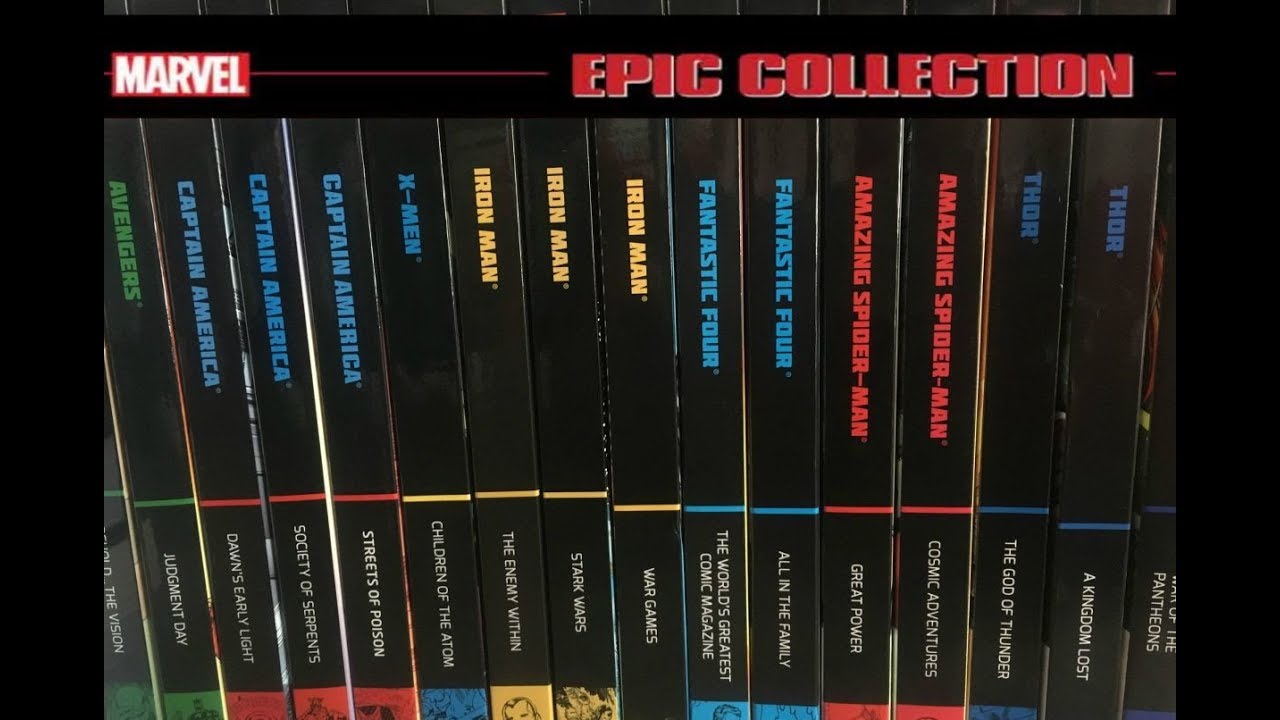 But I’m not covering that here!

This is how Marvel announced that plans were changing for Epic:

Late Friday Marvel announced that due to an overwhelming response the company has, for the moment, suspended their open call for submissions for the EPIC comics line. The EPIC comics line was an initiative realized by Marvel’s Bill Jemas as a means to give previously unknown talent the opportunity to write for Marvel. Originally the line was to support creator-owned publication as well, a policy which was soon changed after the launch. Mark Millar’s “Trouble” remains the only creator-owned property published through EPIC.

“We’re still seeking and developing new talent and have created showcases just for these new writers, and just for the time being we’re scaling down the EPIC process to give aspiring creators the attention and professional response they merit,” concluded Focarile.

That’s a way of saying “we don’t think these Epic things will sell”, I think?

Jemas was fired and Epic was over:

During this time, Jemas spearheaded the revival of the company’s Epic line, which would publish creator-owned books, but his interference in editorial generated much ill will among creators who felt his ideas did not help the quality of the books. Producer and Marvel Studios CEO Avi Arad in particular was angered over certain comics overseen by Jemas that Arad had difficulty selling to Hollywood producers and stars.

Or as Todd Verbeek says:

There had been rumors and indications for over a month or that Marvel exec Bill Jemas had fallen out of favor with his bosses. His confrontational approach to public relations and his support for controversial comics that possibly interfered with movie licensing deals were the most-cited reasons.

Since then, Marvel has announced that the new Epic series slated to be launched early in 2004 would instead be combined into a quarterly anthology; that series was canceled after a single issue.

Another not-very-encouraging sign is that sometime on or before 14 October, the entire Epic section of the Marvel web site (including “hidden” files that supposedly no one out here in the real world even knew about) was deleted from the server. A bit drastic if it’s only a temporary change in the submission policy. It’s over.

And it’s over for me, too! Whee! This Epic (re-)reading project took a lot more time and effort than I expected — I thought I’d be done with this several months ago. It’s not that the books Epic published were, you know, really, really bad, but there’s a bunch of them that were, er, less than inspired?

But now I can do other things! I can do to Hawaii! Er, no. Corona. No music festivals… er… uhm…

I’m sure there’s other things I could be doing!

Anyway, doing Epic wasn’t as much fun as doing Eclipse Comics, but I’ve already lined up the next 80s company to (re-)read. It’s a secret. Ssh! And I’ll probably not start it for a year or so, because I’m comicsed out.

Oh, and I almost forgot: I still haven’t done Groo. That’s just 120 issues. I skipped it because it didn’t arrive in time to do it in sequence, so there’ll be two more posts to this blog (an overview post and Groo), and then it’ll close down.