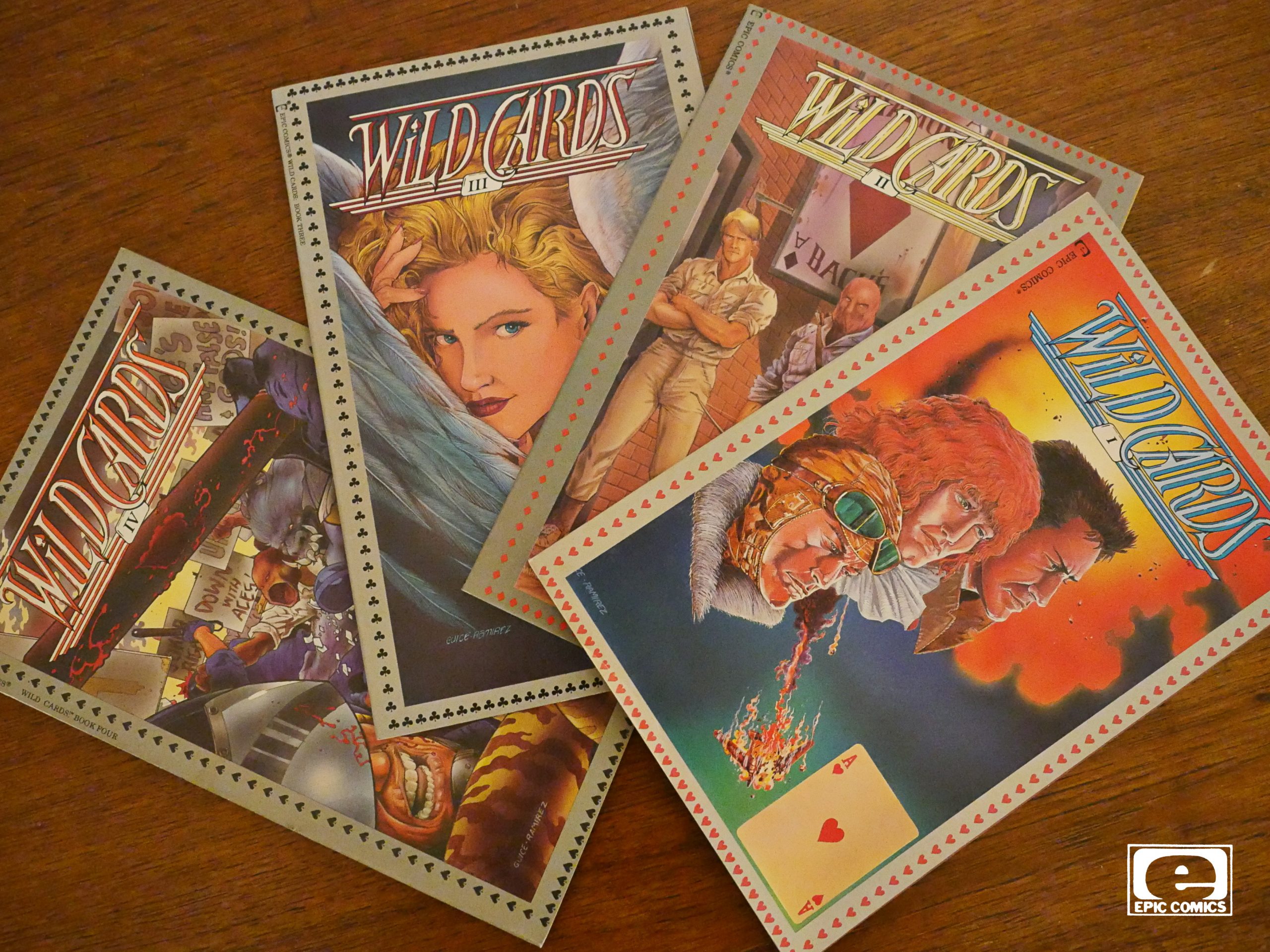 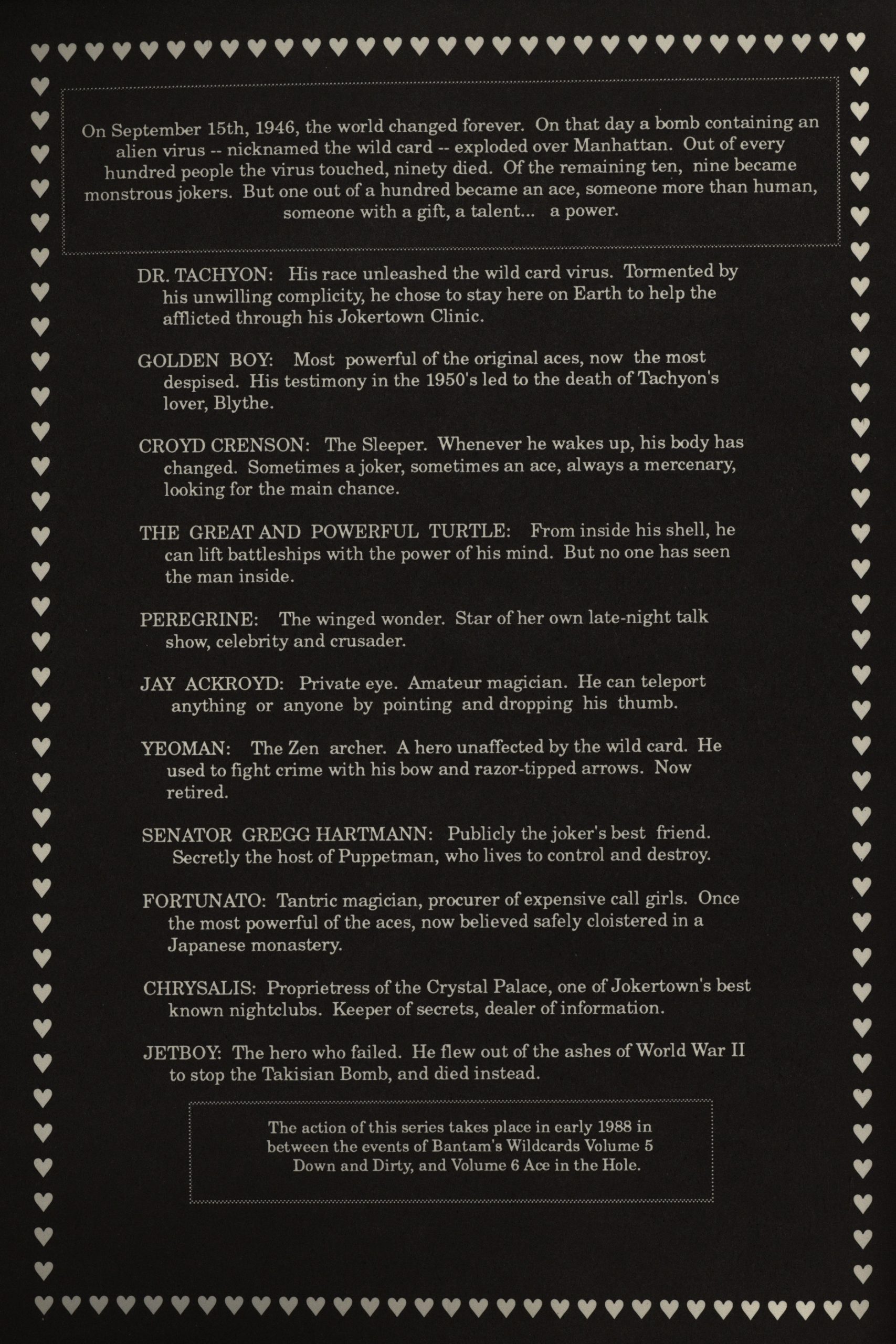 So… this is a series based on GRR Martin’s 80s shared anthology series Wild Cards? I’ve never read that series, but this summary page says it’s about aliens dropping a virus over New York, killing 90%, and making 9% into “jokers” (villains? monsters?) and 1% into “aces” (heroes? pretty people?).

Now, the cutesy terminology here rubs me all the wrong ways, but I’m excited. I’m aboard: This is gonna be a rollicking series of sci-fi super-hero and intrigue. And we’ve already gotten the recap done on the inside front cover, so we can dive straight into the action. 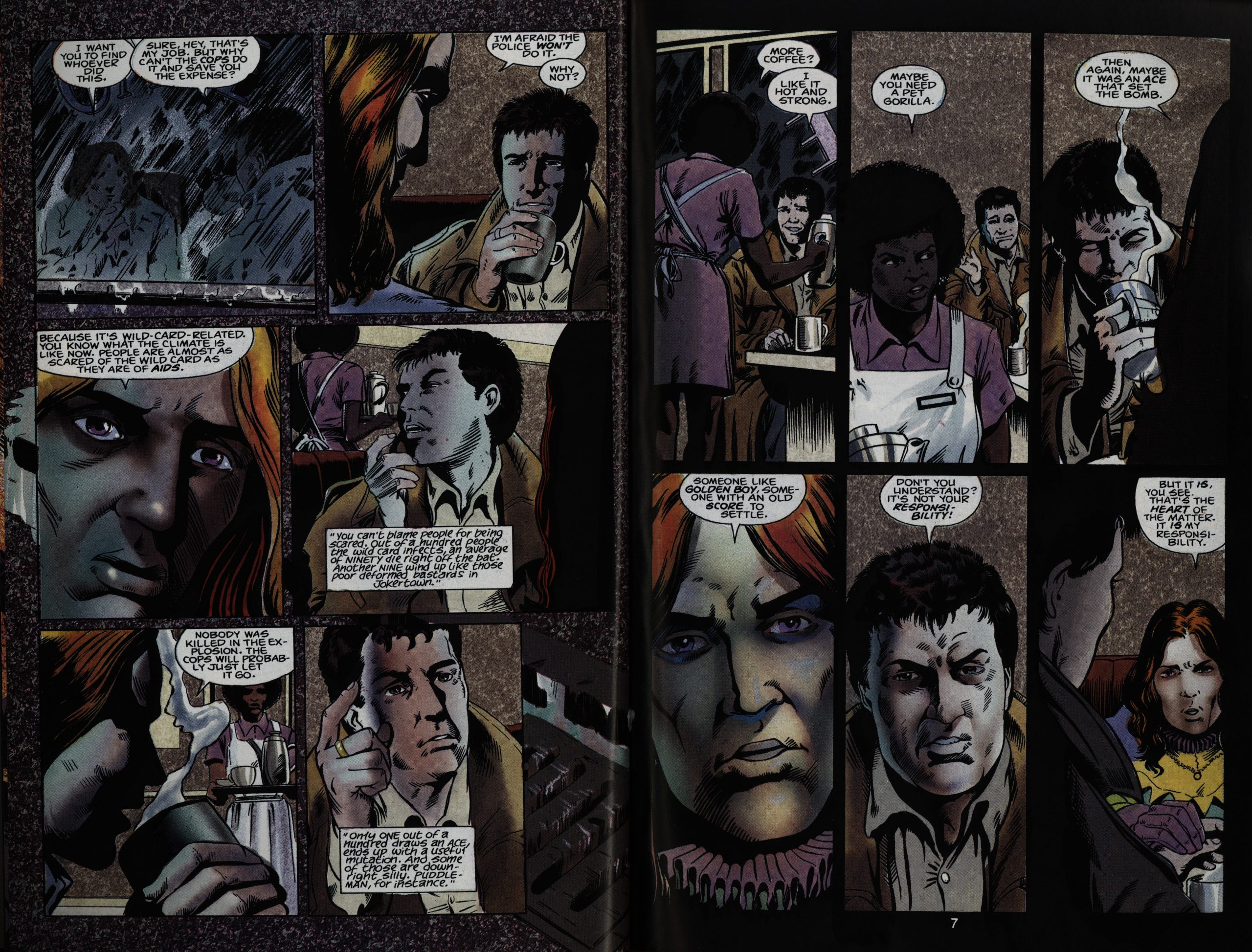 OK, OK, we get a bit more recapping of the concept, going over the same points… perhaps they’d just not gotten editorially coordinated. Fine, fine, that happens. And there’s a mystery being presented here on these early pages, and it seems like we’ll dive into that toot sweet. 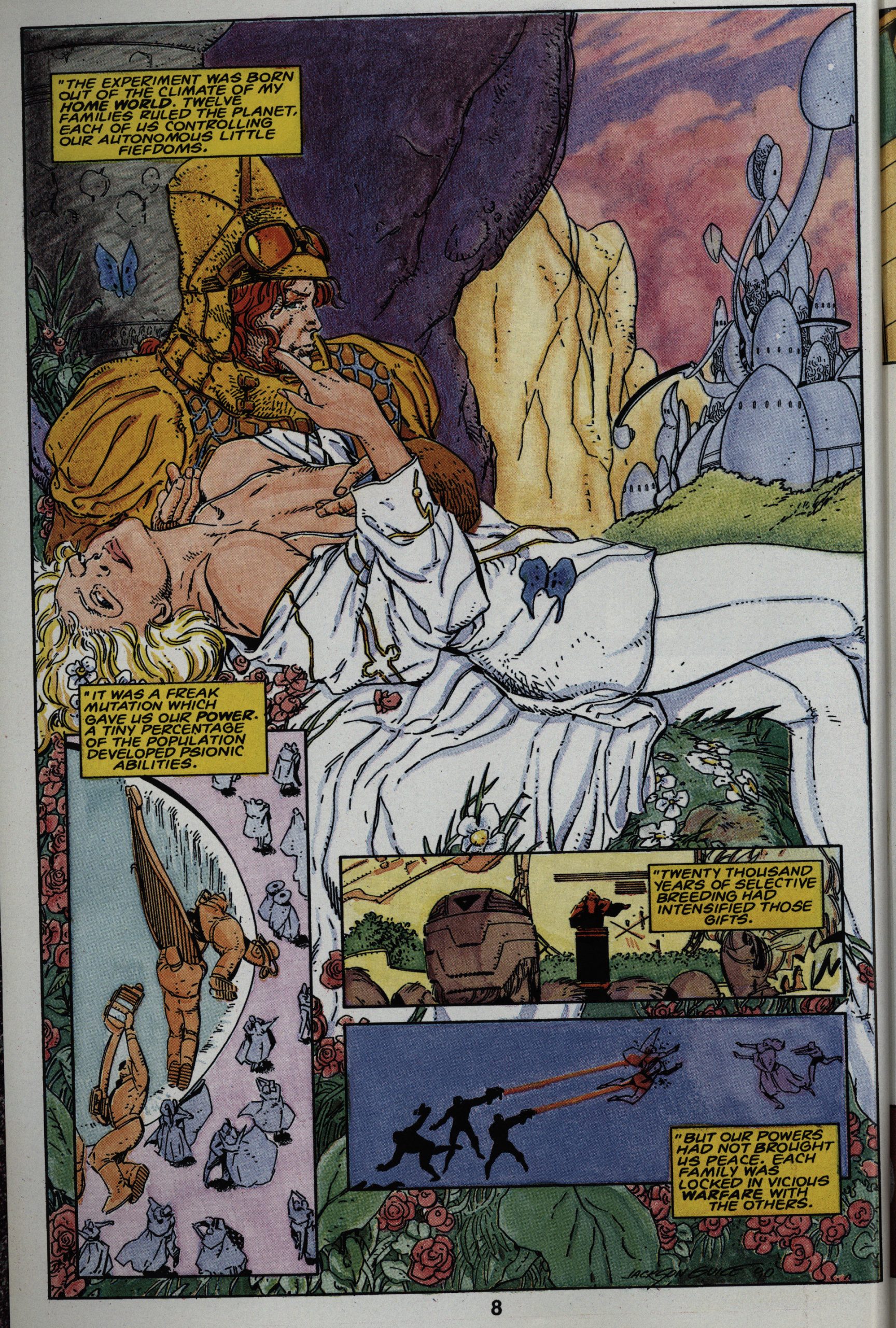 Oh, my. Then we get a different artist all of a sudden? Oh, this is going to be an anthology? Well, OK, that makes sense; it’s based on an anthology series, but that change in artist gave me a whiplash.

There were no credits in the front of the book… 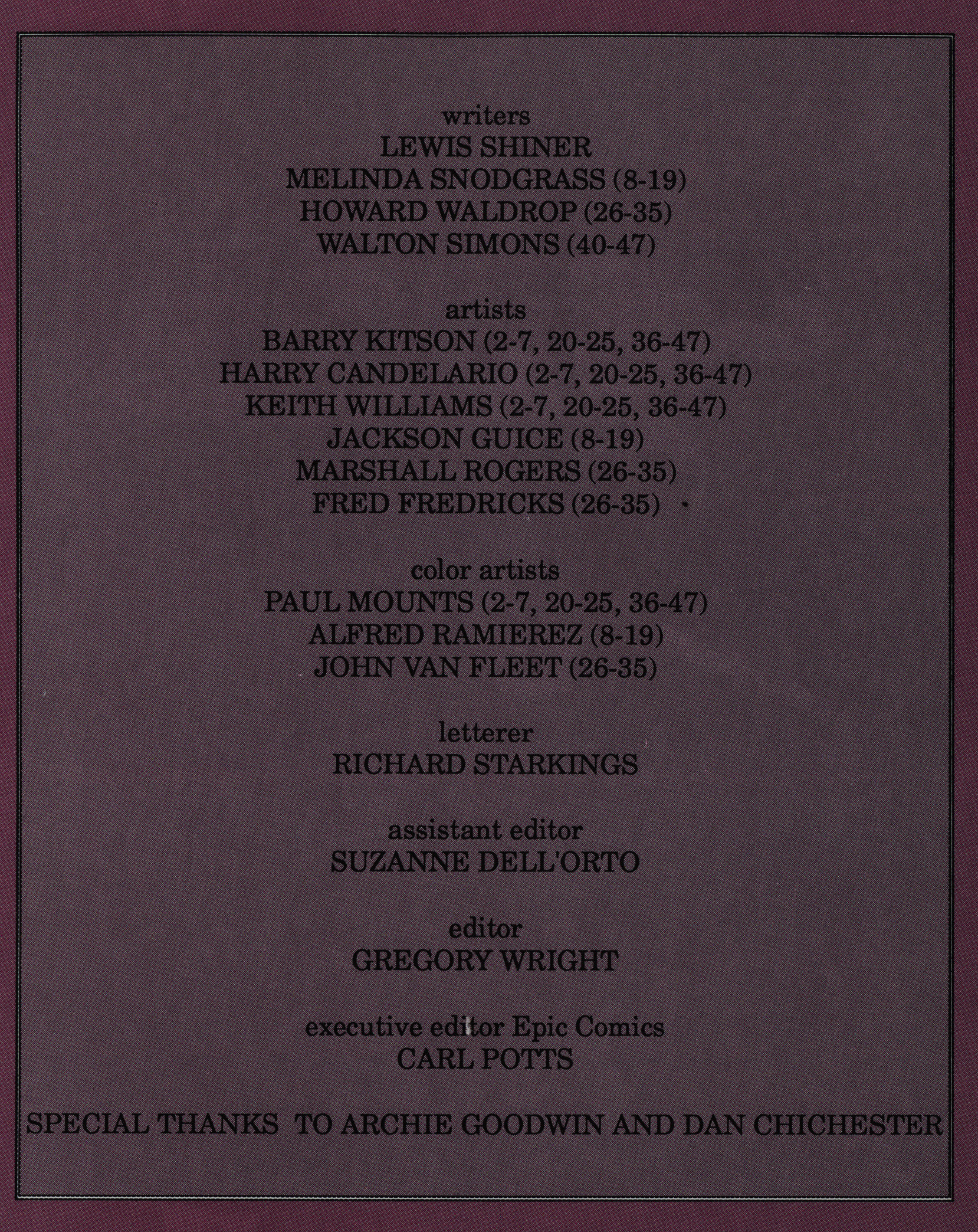 Ah, there it is; in the back. So… that’s… a lot… of writers and artists. But, OK, fine, this is an anthology with a framing story? Fine, fine.

The first story was an origin story, though; a rather abbreviated and summary one, but perhaps now the series will start? 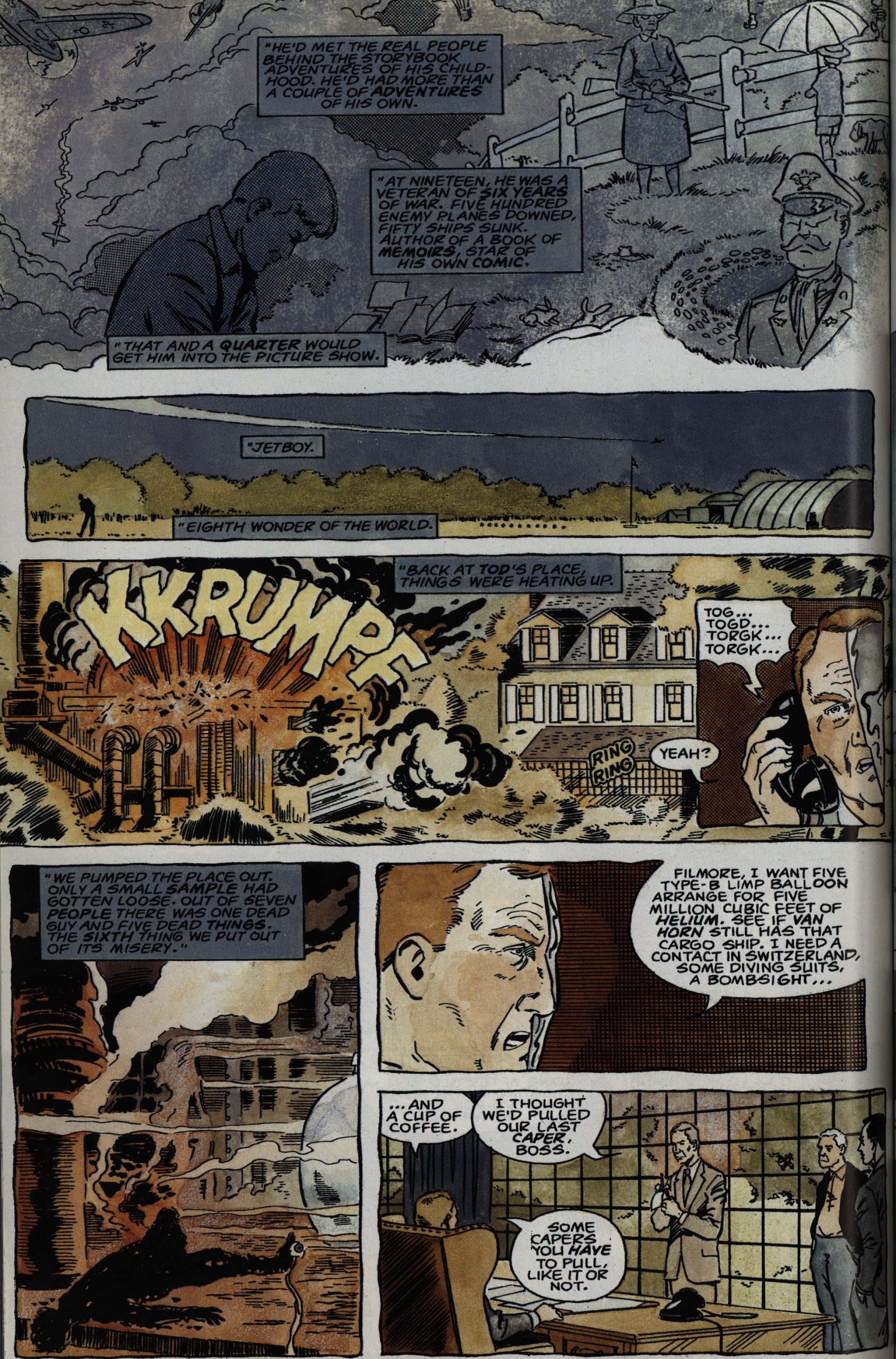 No… we get another origin story? Told pretty summarily? 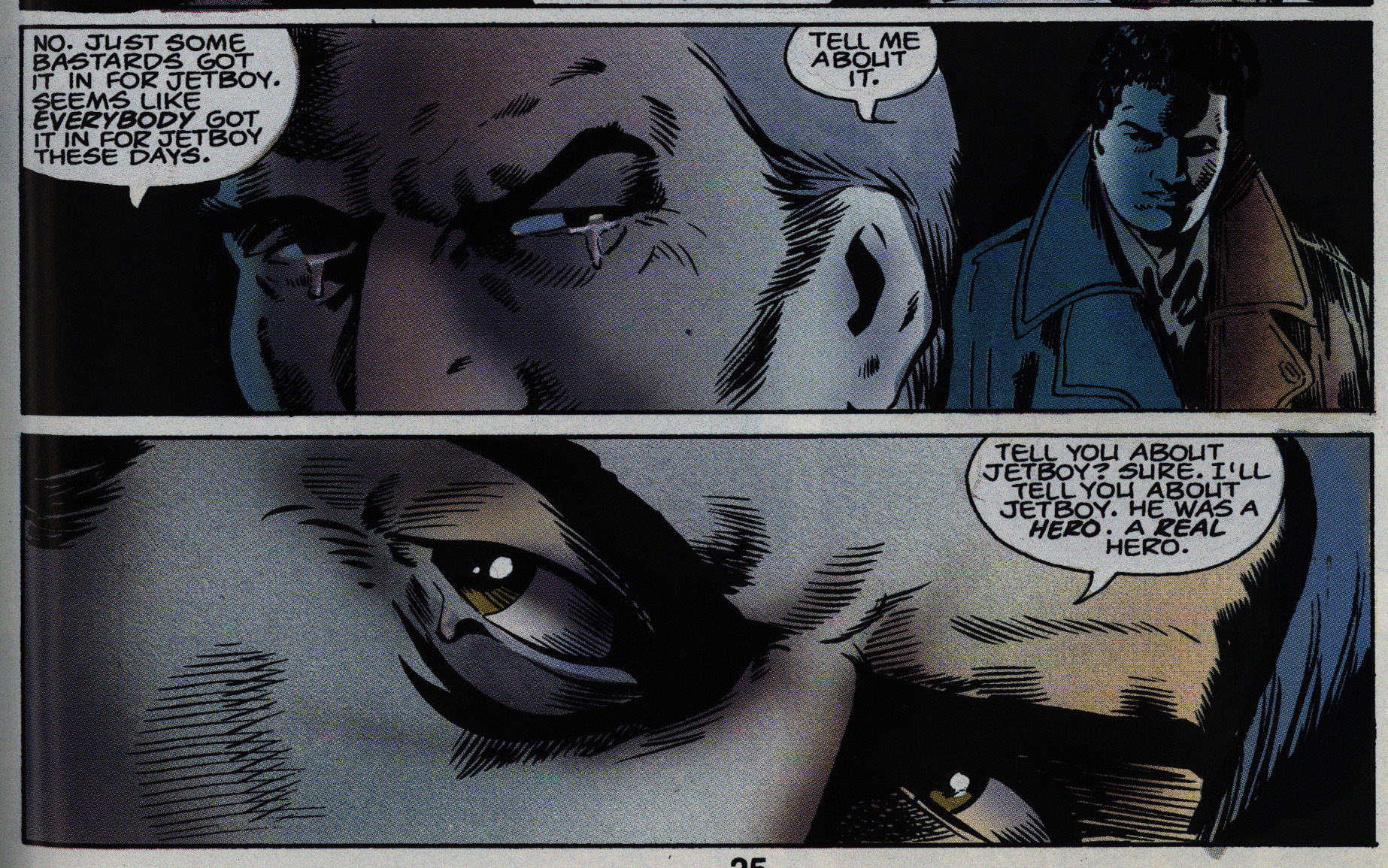 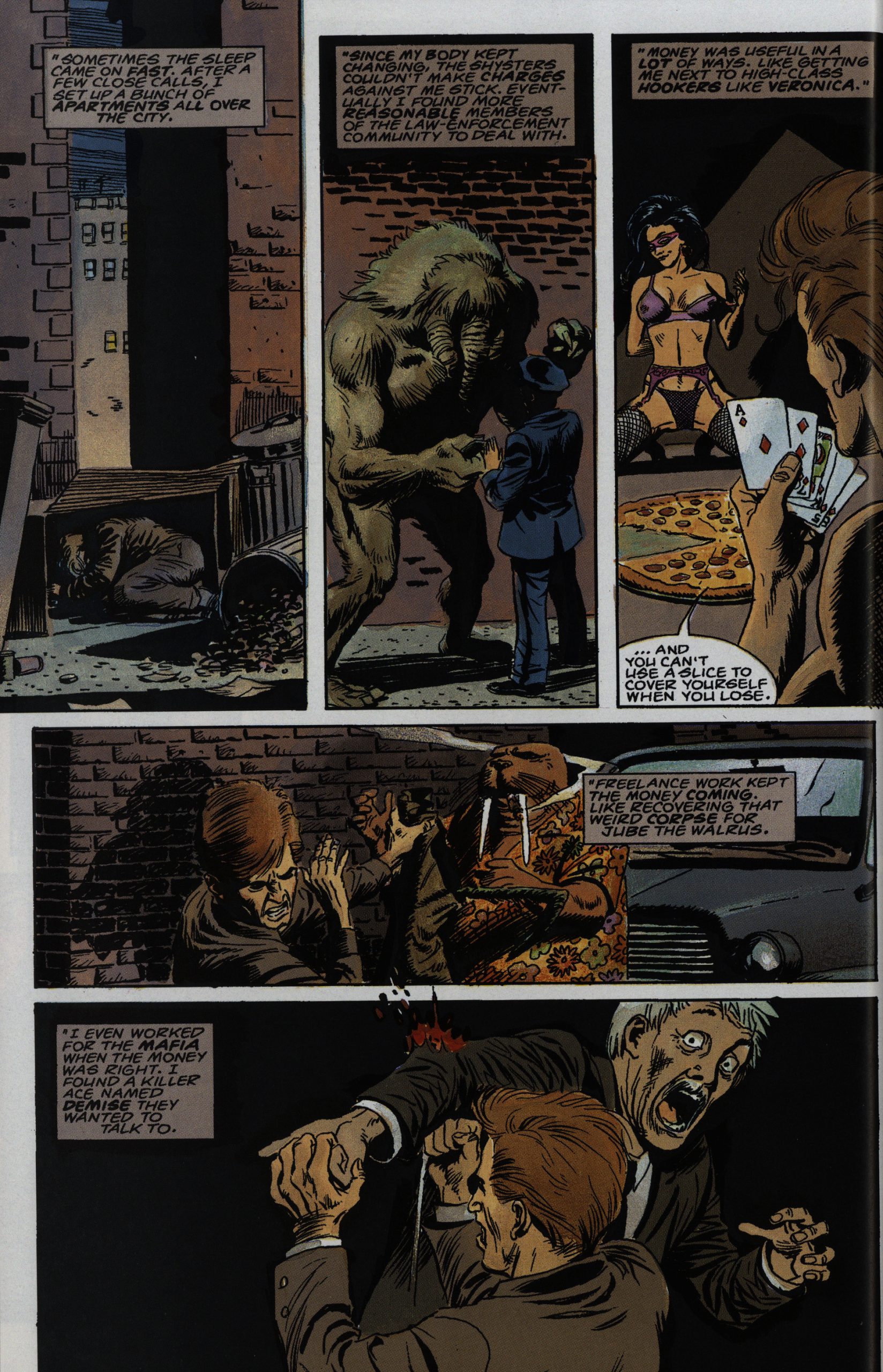 Another one! WHAT THE FUCK! IS THIS SERIES JUST GOING TO BE ONE ORIGIN STORY RECAP AFTER ANOTHER? 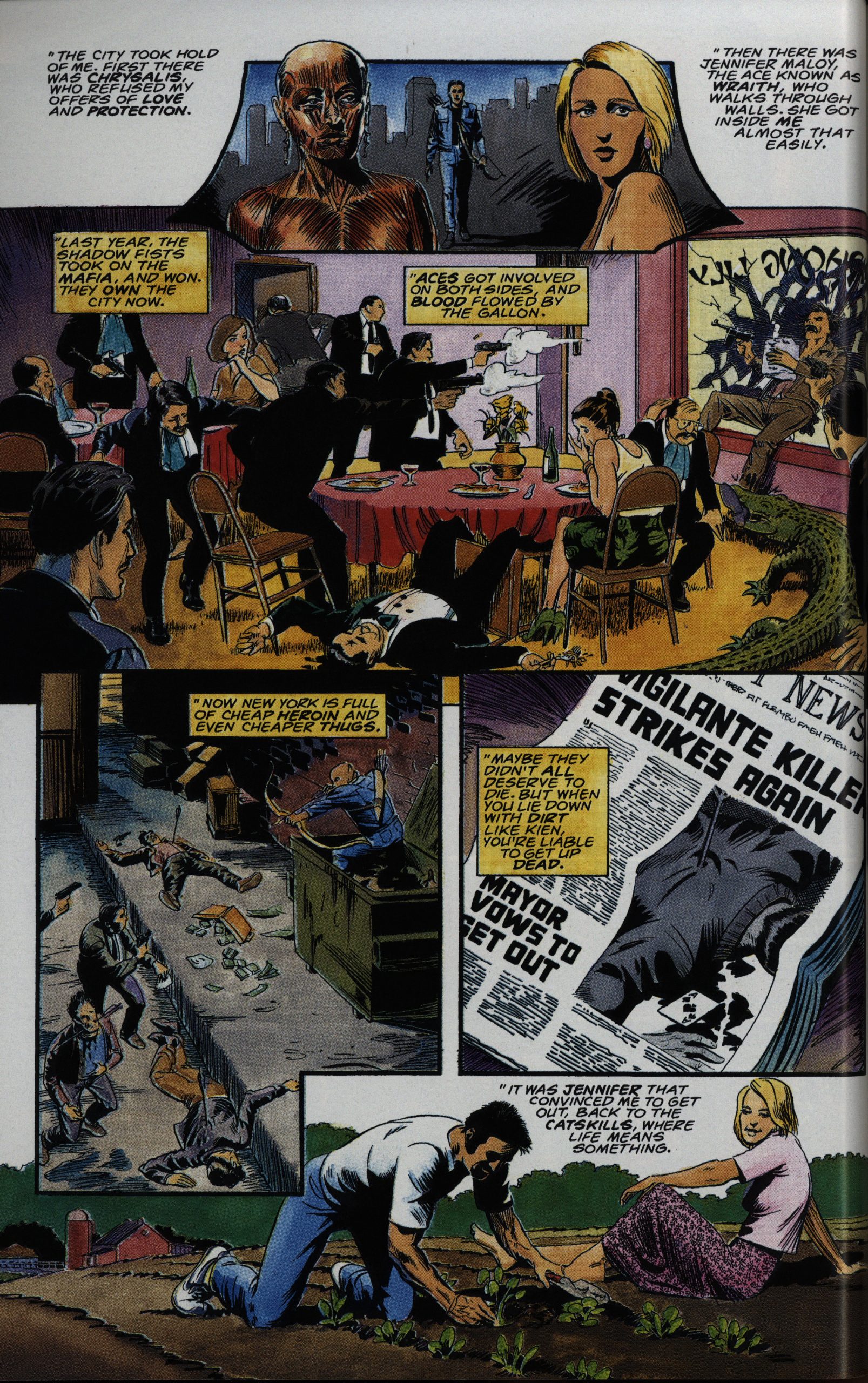 It is. The series is 200 pages long, and of those, 170 of them are origin stories, recaps, summaries and recaps of summaries. 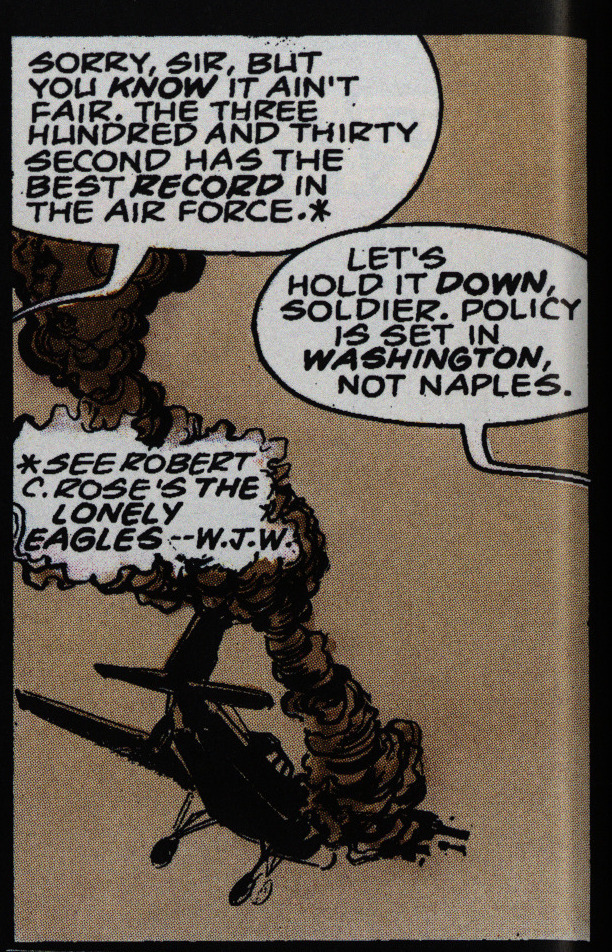 There’s even one that seems to just straight-up do recaps of a bunch of different stories, introducing us to dozens of names we never hear of since, and has zero interest in knowing about.

Now, if there’s one thing that pisses me off, it’s reading plot recaps. If somebody back in 1990 were sitting around, scheming, thinking “Could we make the perfect nightmare of a book for that guy who’s going to be reading all the Epic comics in 2020?”, they were certainly successful.

Who is this series for? Anybody unfamiliar with Wild Cards, the book series, would find this about as exciting as watching Vaseline dry. So is it for Wild Card fans? Are there any Wild Card fans that would be exited about three hundred million artists drawing a page of two of characters they quite like? Perhaps, but how many of these would enjoy reading these recaps? I can’t imagine anything more boring. 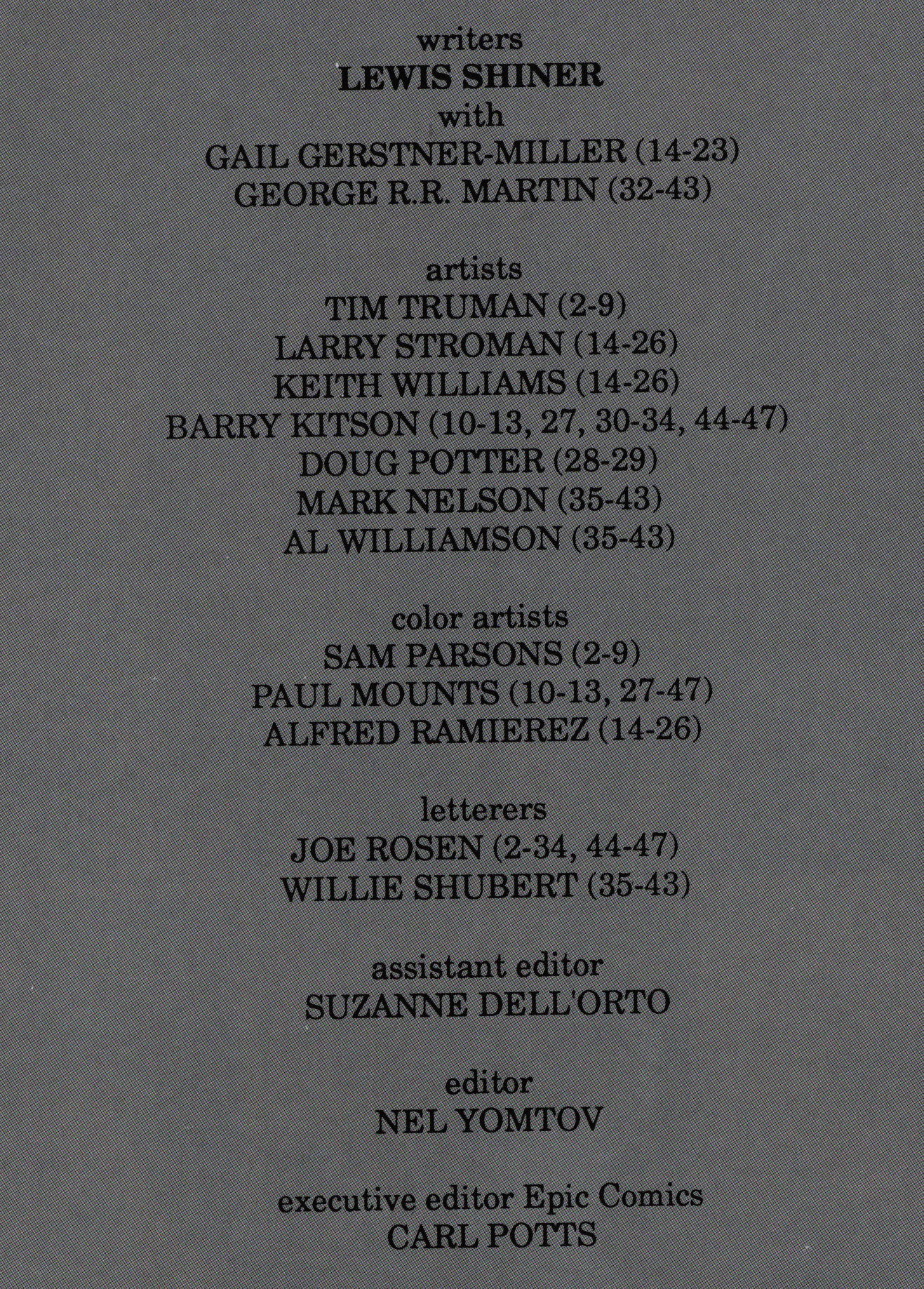 And what is up with that sheer number of artists working on this? Could they only convince somebody like Tim Truman to contribute a handful of pages?

This is a misbegotten, misguided project.

The first issue gets off to a very
slow start due to an overload of back-
ground information. The historical
details of the series are summarized:
where the Wild Cards virus came
from, who Dr. Tachyon is, how Jetbw
died, that Golden Boy is considered
a traitor, that nobody has ever seen the
Great ånd Powerful “Iürtle, that Chrys-
alis knows everything that goes on in
Jokertown, etc. Fans of the paperbacks
already know all this, yet the sum-
maries are so brief that new readers
may still be confused. There is too
much information presented too
superficially.
Hopefully, now that the background
has been established, future issues
will develop the story in more depth
and the characters will become more
humanized and interesting.
GRADE: ! ! !

The series was reprinted by Epic in 1991 in a collected edition, but it looks like it hasn’t been reprinted since then? But I’m not sure; it’s difficult to search for.

This is pretty spot on:

However, the story itself did not resonate with me, and it is hard to pinpoint exactly why. Much of the content was flashbacks to character origin stories and key events from the earlier novels. There was very little new story. It was not exactly an adaptation of the books; it felt more like an advertisement to entice new readers. (I find irony in the fact a series of novels explicitly based on comic book tropes translated so poorly to the comic book format.)

Unfortunately part of that tour involves giving extensive backstories for everyone that Popinjay meets. Multi-page info dumps. Oh, it’s kind of fun seeing these stories from past Wild Cards volumes fully illustrated, but they really kill any momentum in the current story. Meanwhile, they’re so scattered that’s it’s hard to love them on their own too.