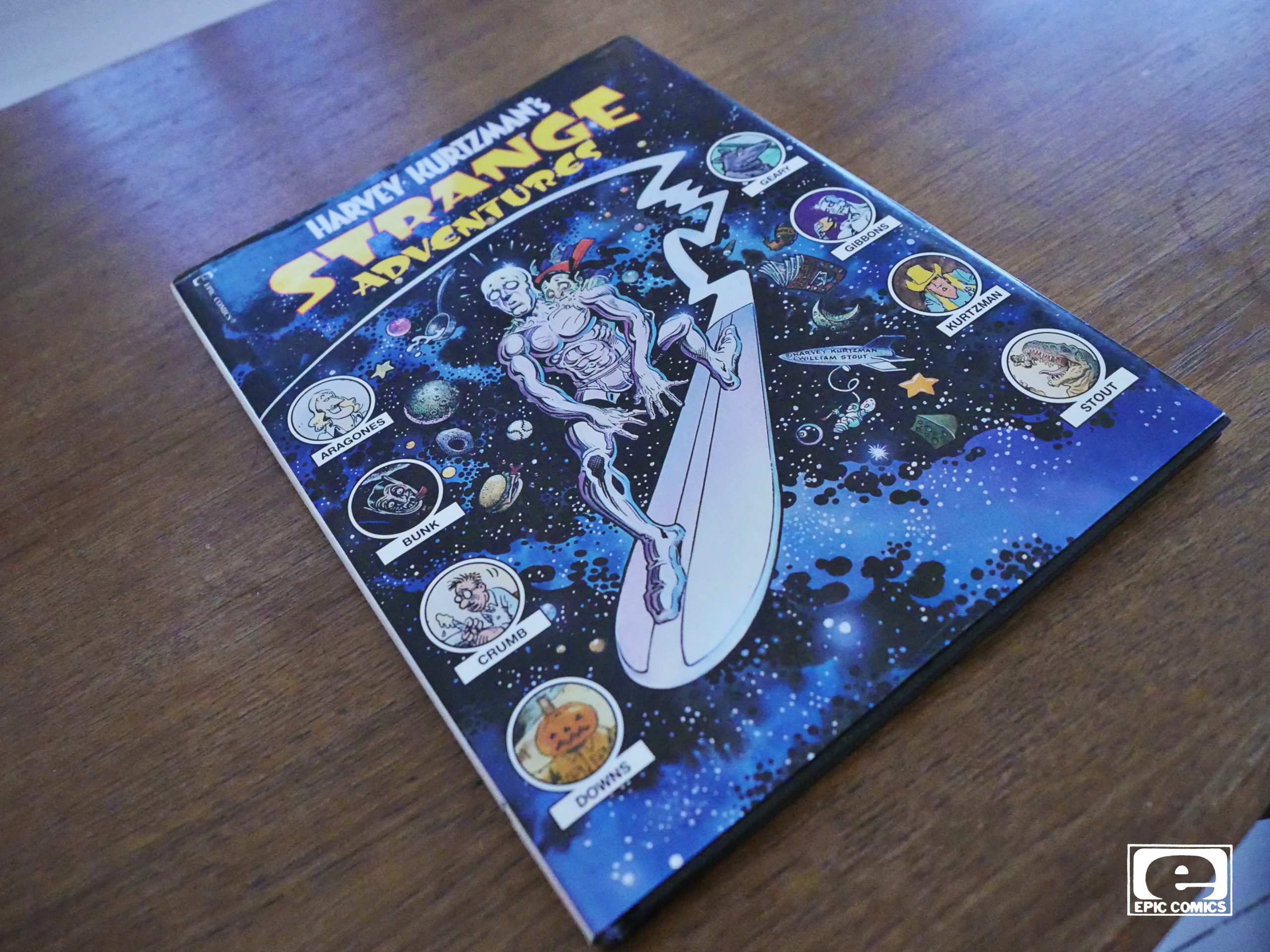 This is a Byron Preiss publication, and after having read so many of the things he’s behind, my enthusiasm for this book is somewhat tempered, even if the list of contributors here seems awesome. I mean: Rick Geary! Crumb! Kurtzman!

From the very start (i.e., the cover) it’s a bit confusing what kind of book this even is. “Strange Adventures” and the Silver Surfer on the cover seems to hint at this being a super-hero parody book? 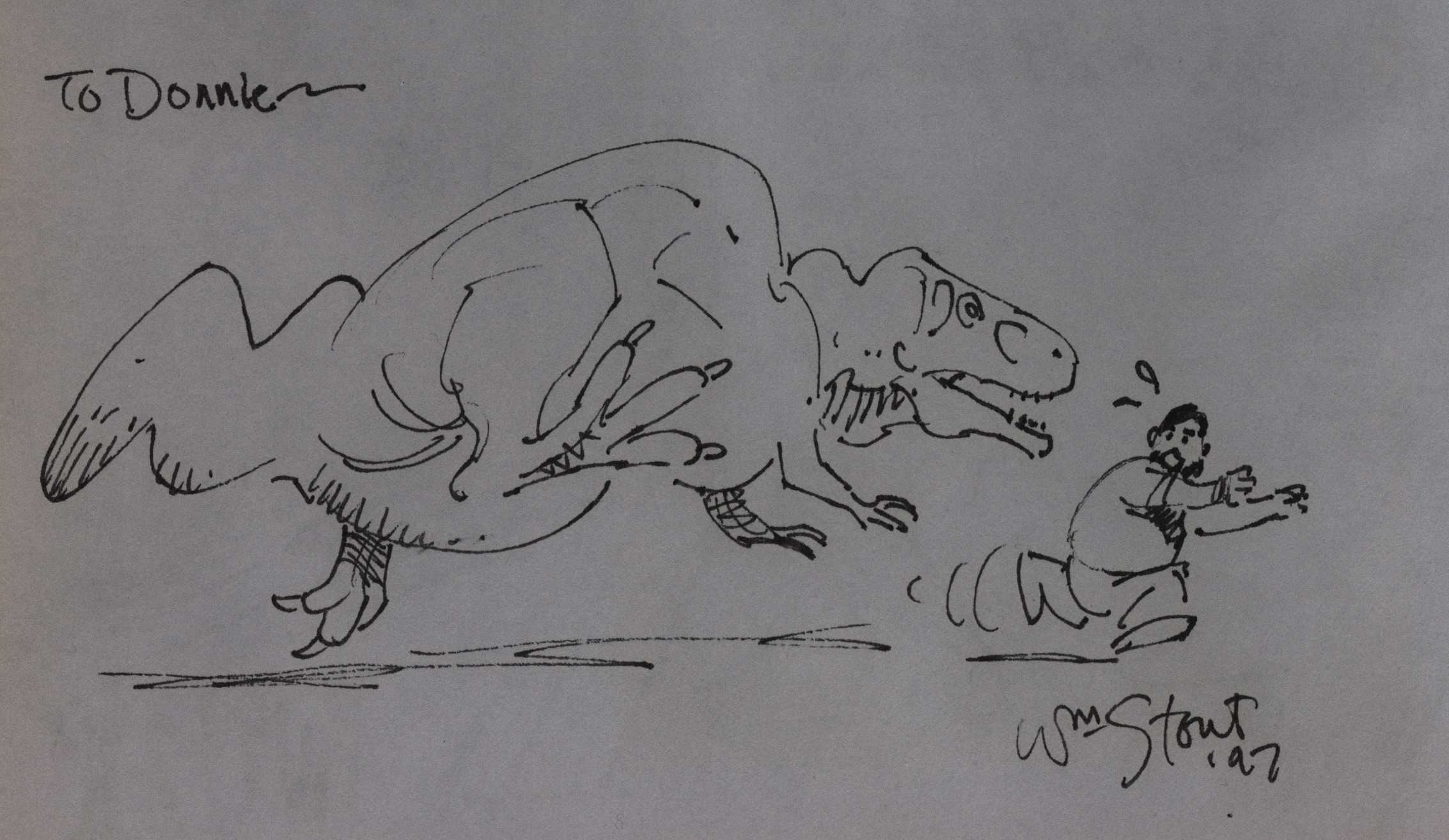 Hey! My copy is signed by William Stout (and has a nice sketch, too). 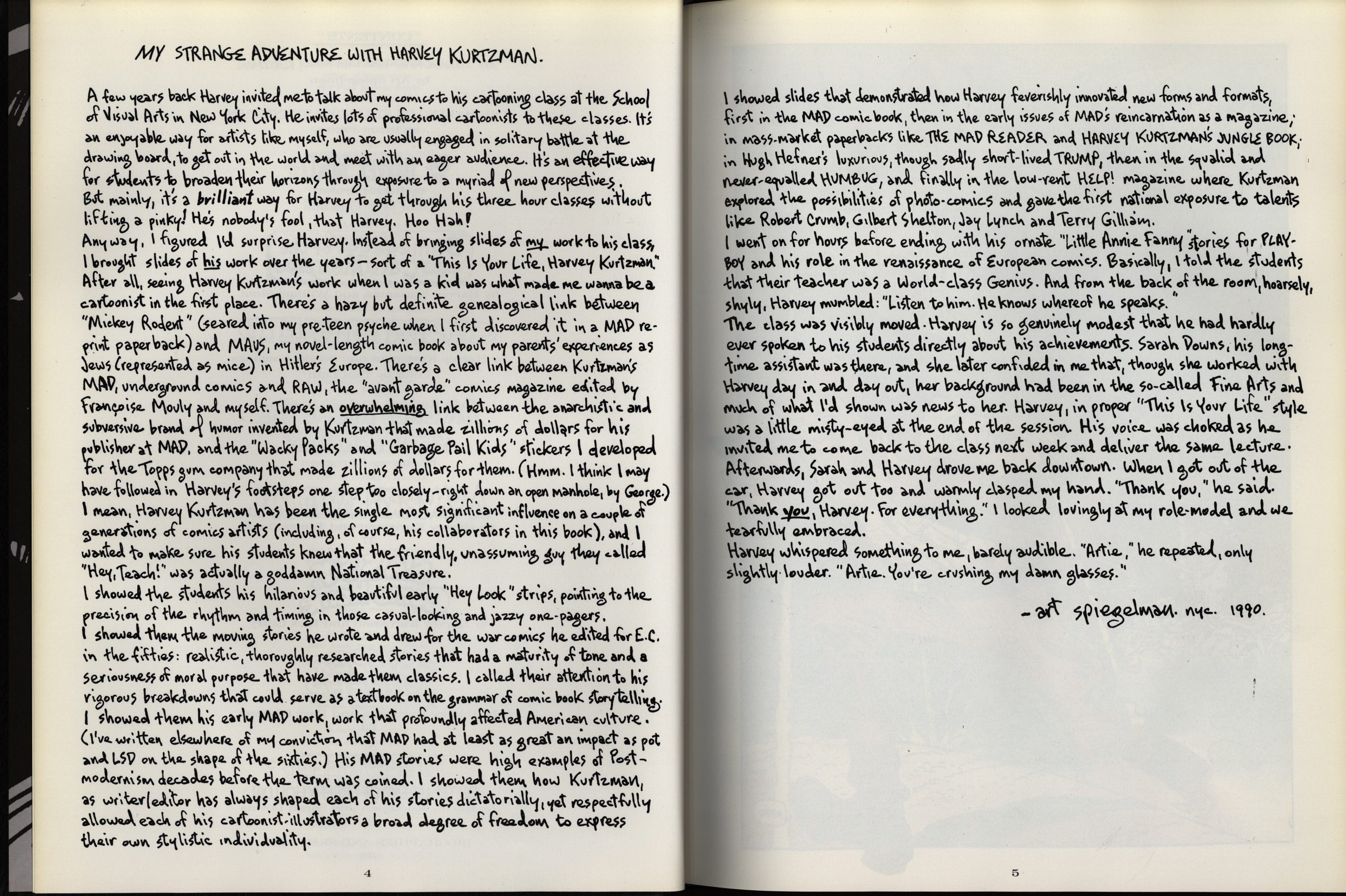 OK, we start off with a two-page introduction by Art Spiegelman, and it’s all about what a great guy Spiegelman I mean Kurtzman is. 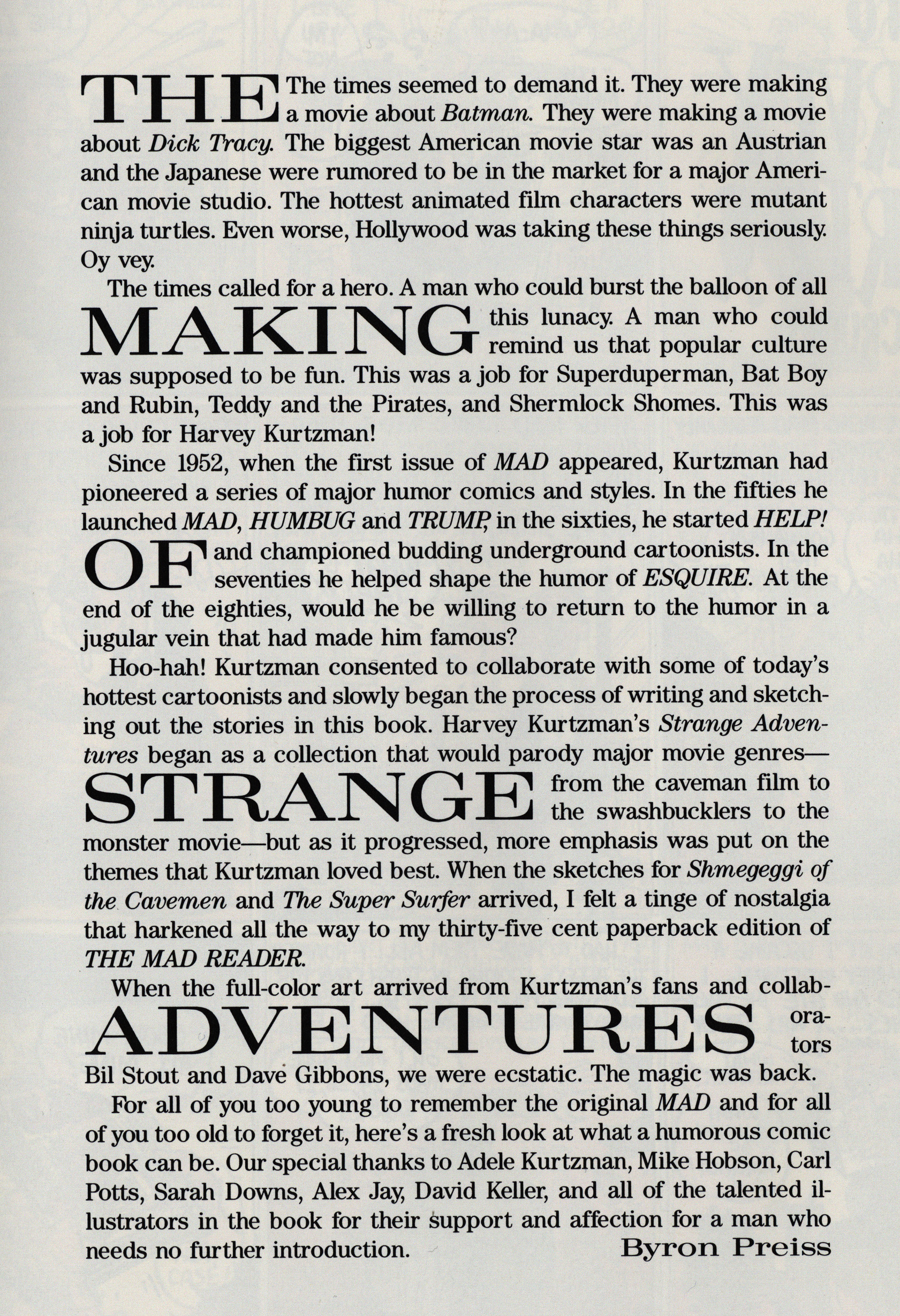 Then an introduction from Preiss where he explains that this book was supposed to be a collection of movie genre parodies… but then it wasn’t. Anyway, he’s paired off with “today’s hottest cartoonists”: So is the concept here pairing Kurtzman off with new, fun artists? I’m aboard with that. 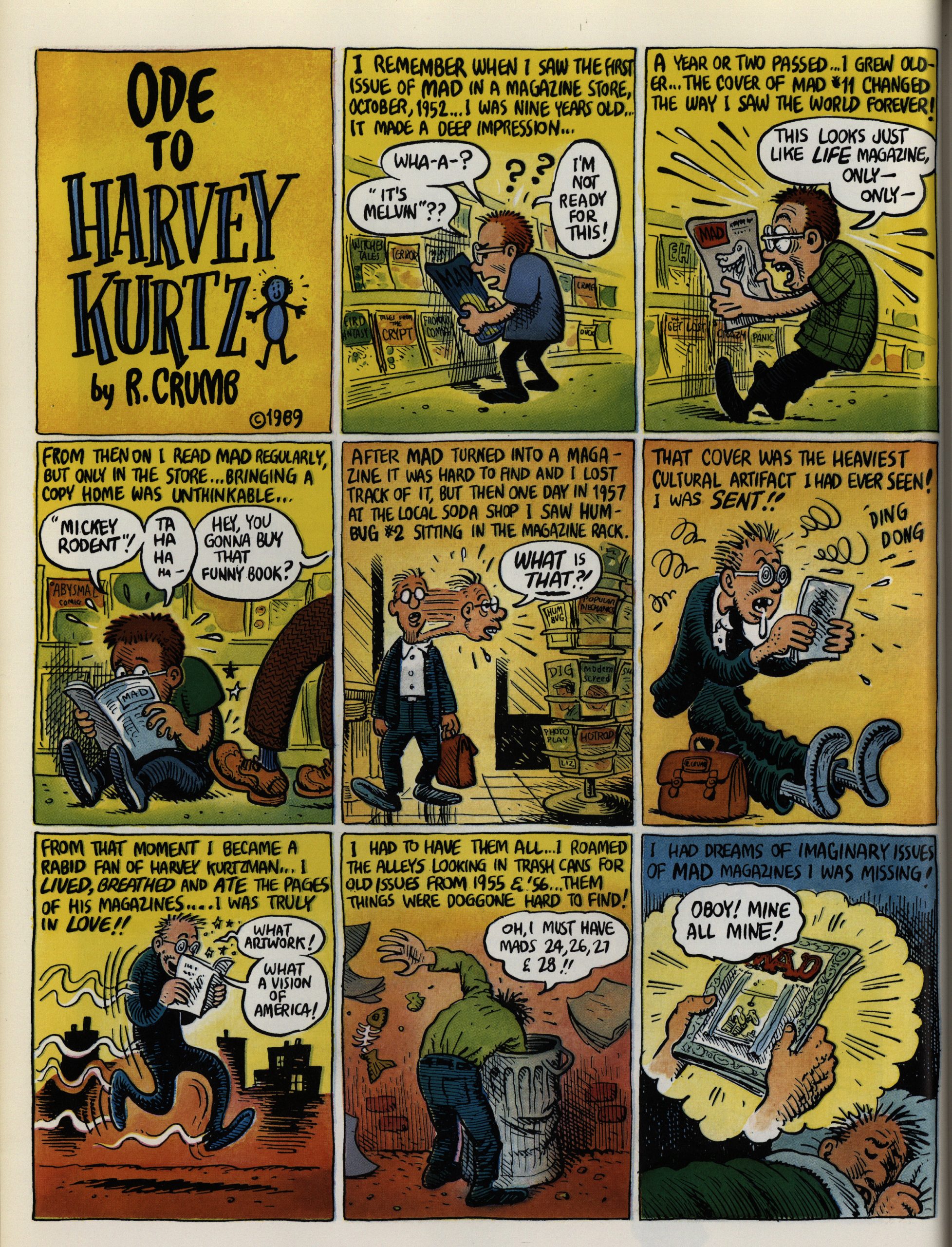 And then another introduction: This time by R. Crumb, and this one really is about how great Kurtzman is. So is this a tribute book to Kurtzman, where everybody contributes an anecdote or two? 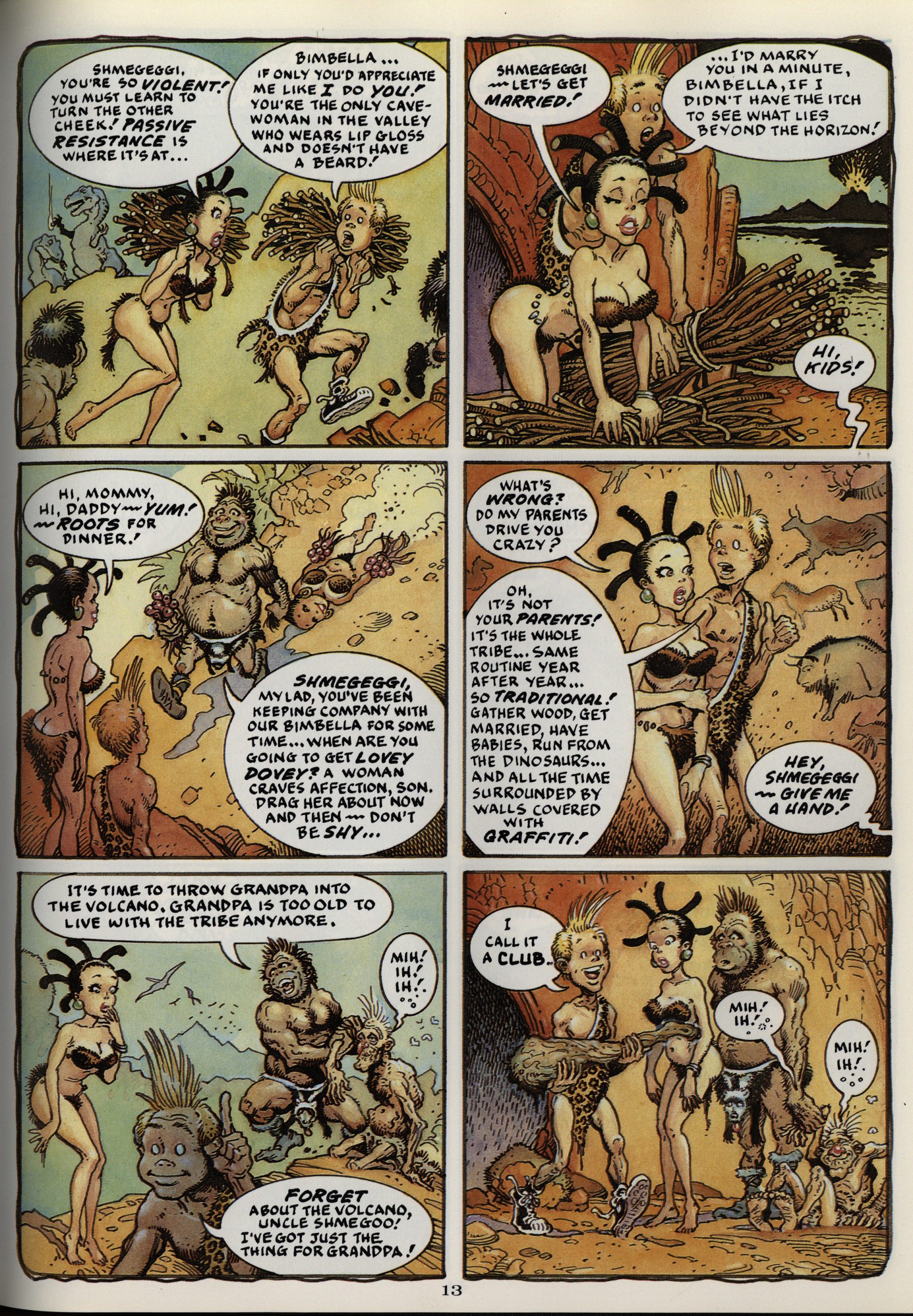 But then the book actually starts, and the rest of the book consists of funny shorts in a Mad vein — and written by Kurtzman. William Stout does his best Bill Elder impression, which is a very good impression indeed. 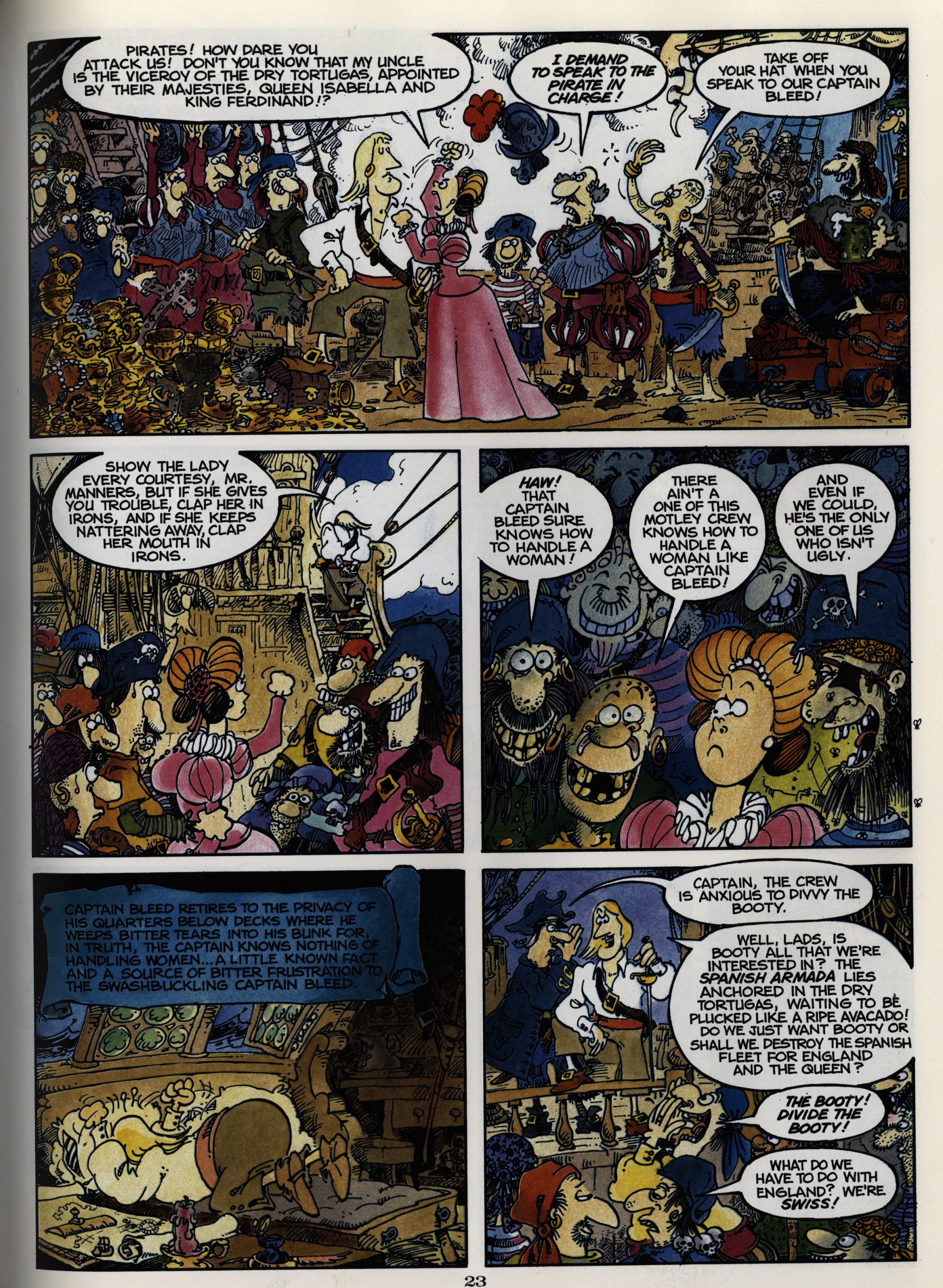 I’m guessing “today’s hottest” didn’t refer to young up-and-coming artists, but who can resist Sergio Aragones? He does insanely detailed artwork for his part. 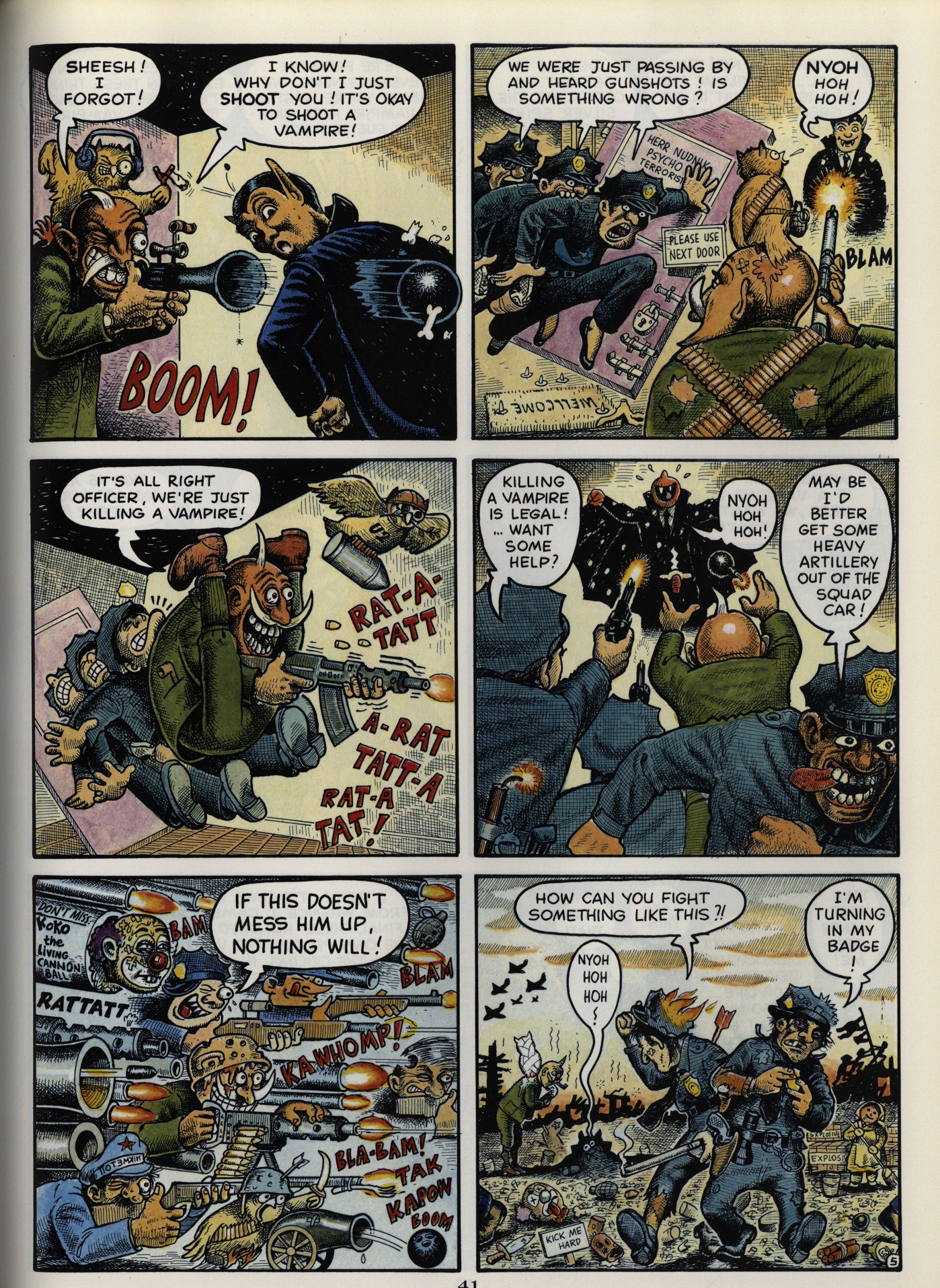 And… Tomas Bunk? Hm… I’m not familiar with his work, but I should be, I see. It’s the best piece in the book. It’s got all the insanity the other pieces only hint at. 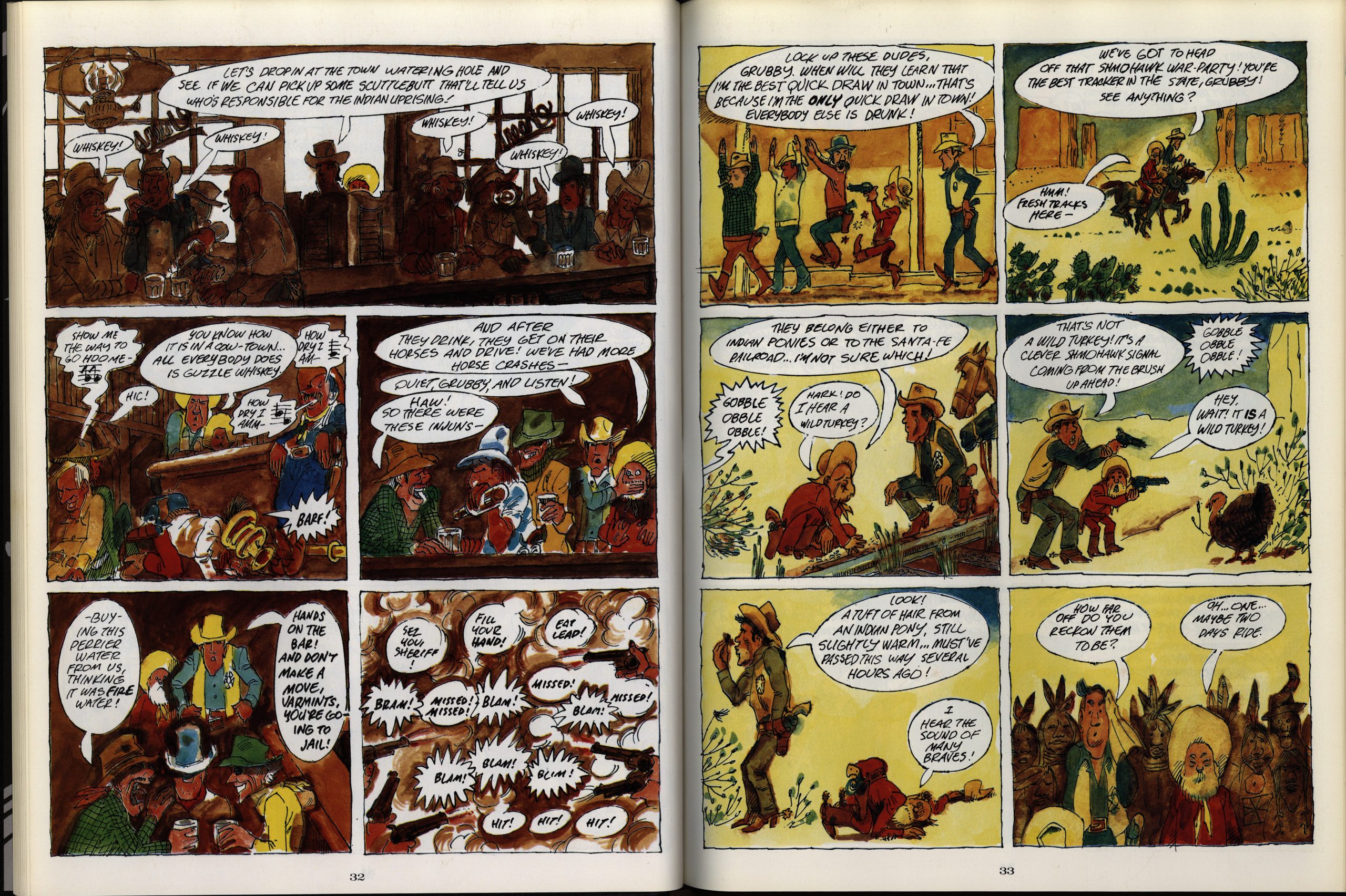 Kurtzman does the artwork for one of the stories, and it’s not exactly up to his 50s standards.

The most disappointing piece in the book is drawn by Rick Geary. Not because it’s bad, but my expectations were so much higher than this. 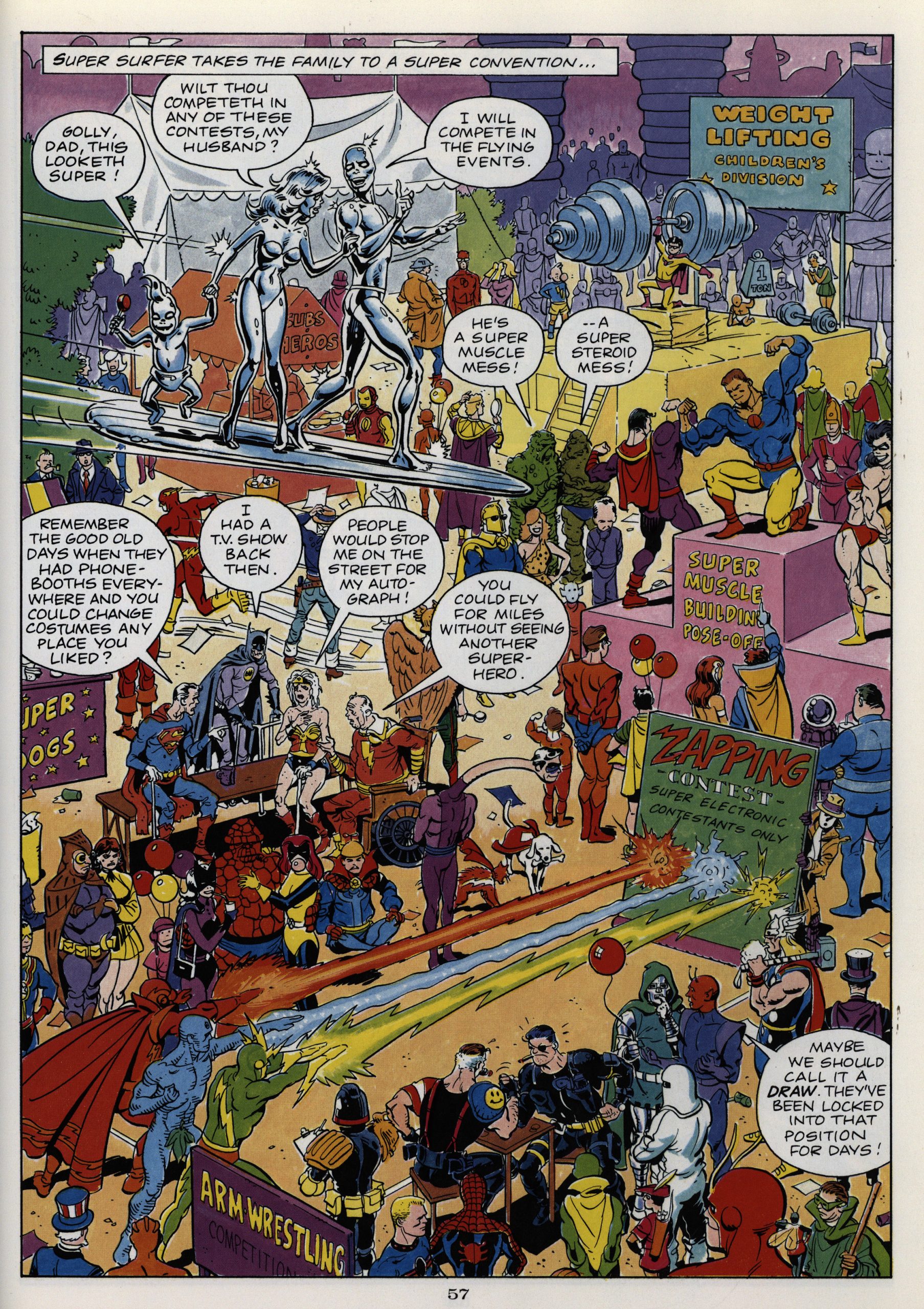 Dave Gibbons does the only super-hero thing in the book, and he sneaks in some of the cast from Watchmen. And a fig leaf. 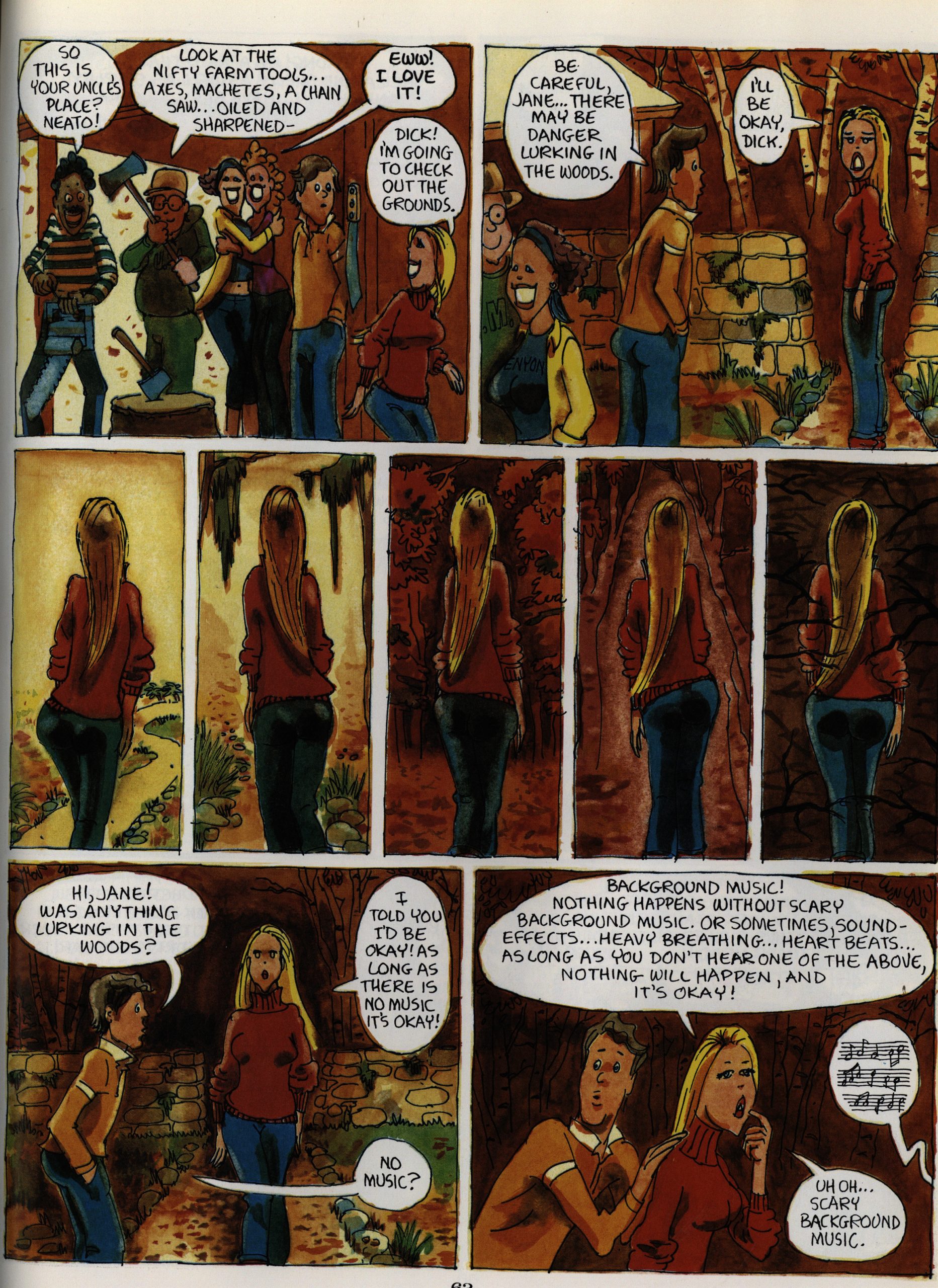 Finally, Sarah Downs does the artwork for a generic slasher parody, and it looks very much like Kurtzman’s artwork, doesn’t it? 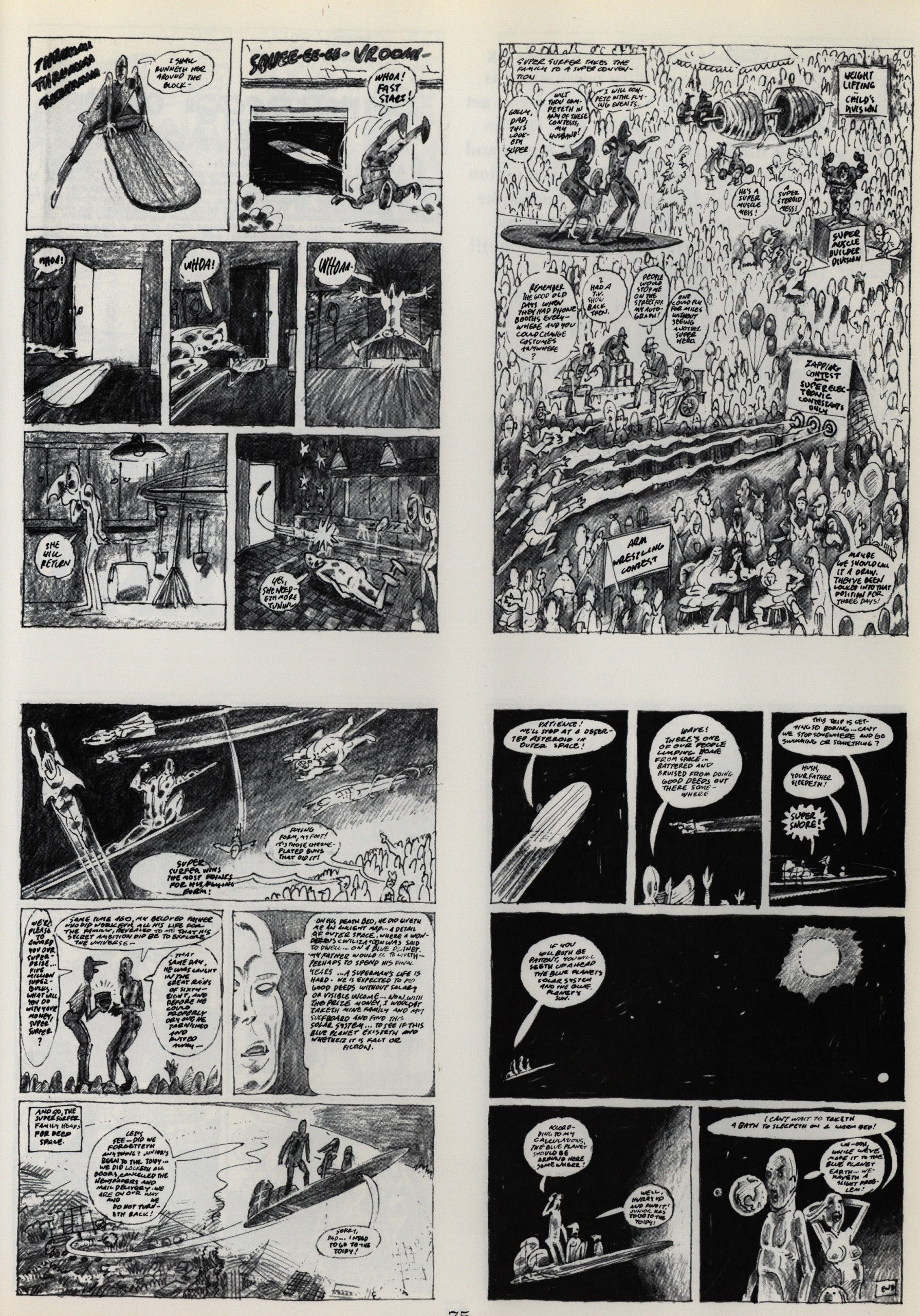 Oh, right! Kurtzman did sketches for all the pages, not just the script. This is for the Gibbons piece…

So… This is a quite handsome book. It’s 80 pages long, and there’s 50 pages of story: The rest are blank, or introductions, or backmatter, so it just feels a bit slight. I mean, getting Kurtzman to do the book at all is great, and We Should Be Grateful, but it’s a confused and disappointing book.

This was to be a major quality item
this fall—a hardcover collection of
new stories written and layed out by
the legendary Harvey Kurtzman with
finished art by such luminaries as
Dave Gibbons, Rick Geary, and
Sergio Aragones. It is my sad duty to
report that this book is not good.
I am dumbfounded. I read the book.
I did not laugh. I was kind of bored.
I was confused. I know who Harvey
Kurtzman is. I know he’s a legend. I
know these artists are good. I looked
up my old MAD paperback reprints.
Yes, Kurtzman is (was?) a genius. I
looked at Aragones’s MAD art and
looked back at Groo. Yes, the master
ofa million funny details. I looked at
Rick Geary’s Junior Carrot Patml and
David Copperfield. Yes. I looked at
Gibbons’s %tchmen. Yes. I looked
again at Harvey Kurtzman’s Strange
Alventures. No. Wha’ hoppen’?
This book is just not funny. The
stories are not well-constructed. The
art, for these guys, is uninspired.
Maybe the problem is that Kurtzman
went after generic satire—lampooning
movie types rather than specifics. But
that doesn’t hold for “Super Surfer,”
which is very specific satire and about
as funny as the latest What The—?.
Maybe the artistic collaborations just
don’t click. I don’t know.
There are some bright spots,
though. Tomas Bunk’s art for “A
Vampire Named Mel,” on an individ-
ual panel level, is crammed full of
funny stuff, reminiscent of the old
MAD. “Halloween, or the Legend of
Creepy Hollow” has its looney mo-
ments. But then there’s a story like
“Captain Bleed,” with not one funny
bit and unfunny Aragones art
What’s going on? I don’t know.

OK, my take on the book is more positive than that, so now I don’t feel like such a grouch.

To start with, Strange “ventures’ six stories
spoof caveman dramas, pirate stories, Westerns,
vampire movies, the Lassie movies, super-
heroes, and slasher films. Half of these cultural
forms have outright disappeared over the last
30 years. Kurtzman tore into American
popular culture’s sacred cows in MAD or Jungle
Book, he generated a real sense of outrage,
matched by his (and readers’) dismay that socie-
ty would place advertising or Archie on a ped-
estal, that such transparent lies could pass for
truth. Most of his targets in Strange Adventures
have strictly nostalgic values; for instance, we
perceive the representations of the pirate story
as illusion, not as symbolic truth, so piercing
the illusion has no satiric or cathartic value.
Kurtzman’s choice Of old-fashioned targets
forces the attention from his subject onto his
style, which hasn’t fared well. The jokes are too
simple, too predictable. As Spiegelman noted
in his introduction to 1986’s reissue of Harvey
Kurtvnan ‘s Jungle Book, Kurtzman’s jokes often
follow a pattern: high-minded statement, second
high-minded statement, wacky deflating state-
ment. It’s a formula that uorked, but Kurtzman’s
application of it now seems mechanical and old.

Behind the mirthlessness in this volume
lurks an even greater problem. No one could
expect Kurtzman’s frenetic style to seem fresh
any more; he’s done it for decades, every other
parody comic has done it, 30-plus years Of
watered-down post-Kurtzman MAD has done it,
TV shows like Get Smar and police Squad! have
done it. It has been done. But even if his style
no longer seems novel, we might expect it to
work on its own terms. It doesn’t. In fact, it
seems staggeringly anachronistic. Why has it
aged so poorly?

In MADs heyday, to be a fluttering image
was to be deprived of the individual’s power;
today, the changing image represents Exr,ver, the
power to move between different states, to be
omnipresent, reproducible. Images are the cur-
rency Of super-stars, as Andy Warhol demon-
strated, so image-bending no longer breaks
icons, it makes them. The chameleonic Madon-
na has replaced steadfast John Wayne.
This all relates to mtxlern theories of post-
modernism; Spiegelman himself states in the
current volume’s introduction, “[Kurtzman’s]
MAD stories were high examples of
Postmodernism decades before the term was
coined.” Certainly MAD now seems redolent
with postmodern features. The critic Frederic
Jameson has noted (in his essay “Postmoder-
nism and Consumer Society”) that one feature
of postmodernist art “is the effacement in it of
some key boundaries or separations, most
notably the erosion of the older distinction be-
tween high culture and so-called mass or
popular culture.” This kind of breakdown oc-
curred regularly in MAD, where Julius Caesar
and Houdy rubbed shoulders, and where
different cultural genres mixed in a confus-
ing stew.

When Einstein appears in one panel of
Strange Adventures’ caveman Story, “Schmeg-
eggi of the Cavemen,” we may not compare his
context — specifically, his temporal one, the
20th century — against the story’s context —
prehistorical times — note the discrepancy, and
laugh. As symbols, what prevents their inter-
mingling? Nothing. Their merger doesn’t con-
stitute a juxtaposition to readers who expect im-
ages to be recombined without “logic,” without
recourse to context.
The implication in all this seems to be that
today’s readers wouldn’t know a joke if it bit
them. That’s not so — obviously, people still
appreciate what we might call MAD-style
humor, as proven by the success of the films The
Naked Gun and I’m Gonna Git You Sucka. Both
those movies, though, had tighter control and
relied more on strong, current jokes. Kurtzman
here is riding hik style, which pales beside the
image manipulation we find in other media. He’s
like a bebop jazzman in the age of scratching
and sampling.

It’s a tribute to Kurtzman that “today’s best
cartoonists,” as the book’s jacket hails them, il-
lustrated his tired material here with such gusto.
Their work provides the greatest appeal in the
slim (80-page), overpriced ($20) volume. Wil-
liam Stout’s artwork on the caveman story is
positively delicious, fully realized without los-
ing any of Kurtzman’s enviable flow. His seven
pages would be worth the book’s price alone.
Tomas Bunk’s work on “A Vampire Named
Mel” sharply recalls longtime Kurtzman col-
laborator Will Elder’s work in its torrent of tiny
gags. Sergio Aragones and Rick Geary both
supply top drawer examples of their style.
Dave Gibbons’s work on the Silver Surfer
parody, though, is curiously flat; he’s no Marie
Severin. (The story reads like something from
the What 7h—?! slush pile, particularly distress-
ing since that comic apes Marvel’s 1960s book
Not Brand Fxch, which aped Kurtzman’s MAD)

Well, that’s a pretty insightful review; go read it all on the TCJ web site.

The book has never been reprinted.