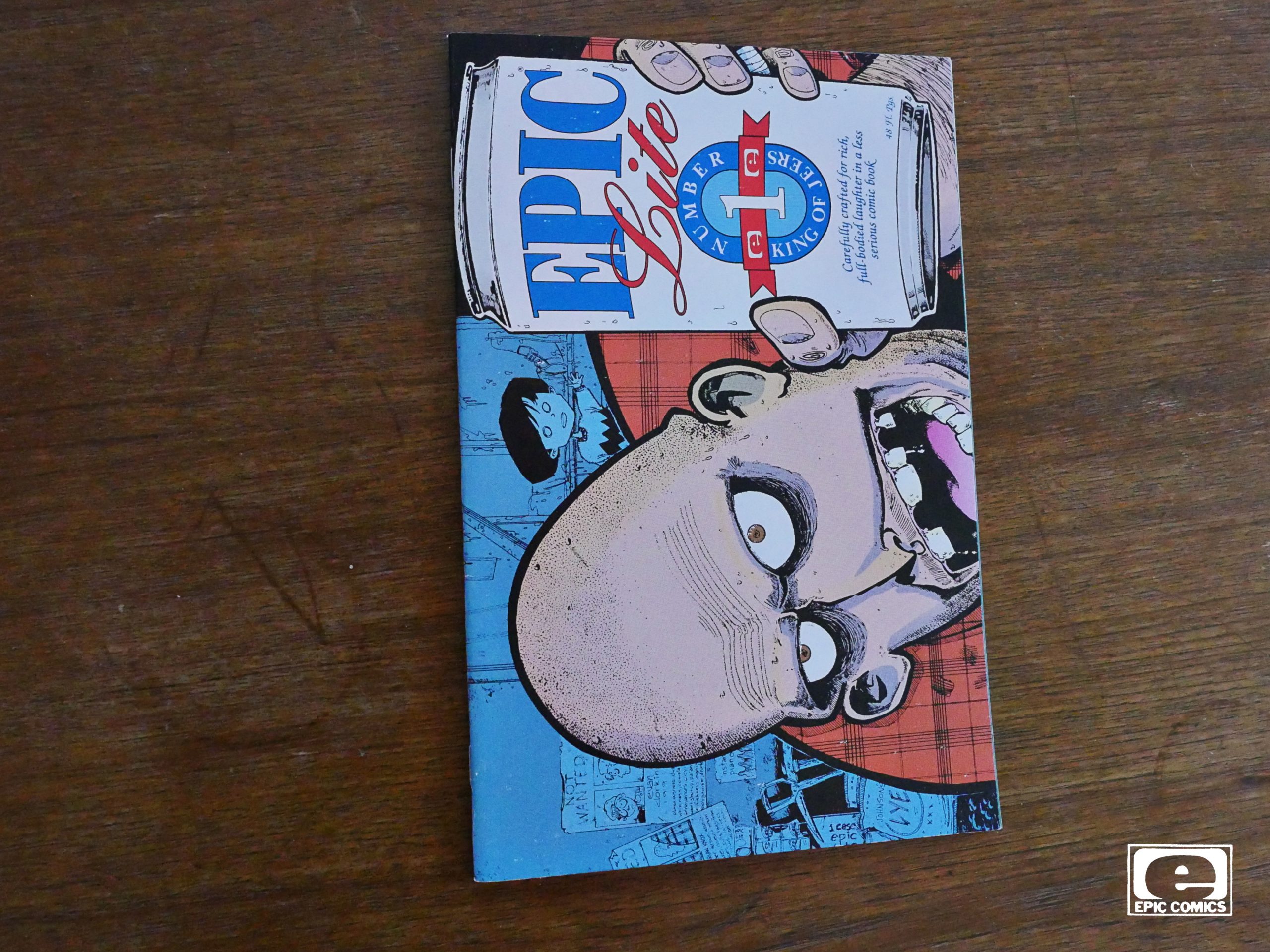 The book is in Epic’s go-to format at the time: A 48 page book (with thin shiny paper) in a thicker, cardboard-ish cover. Which is a change from what they were doing the previous year, which was 48-page squarebound books (“prestige format”). I wonder whether they changed the format to save money (or bring the price point down)? 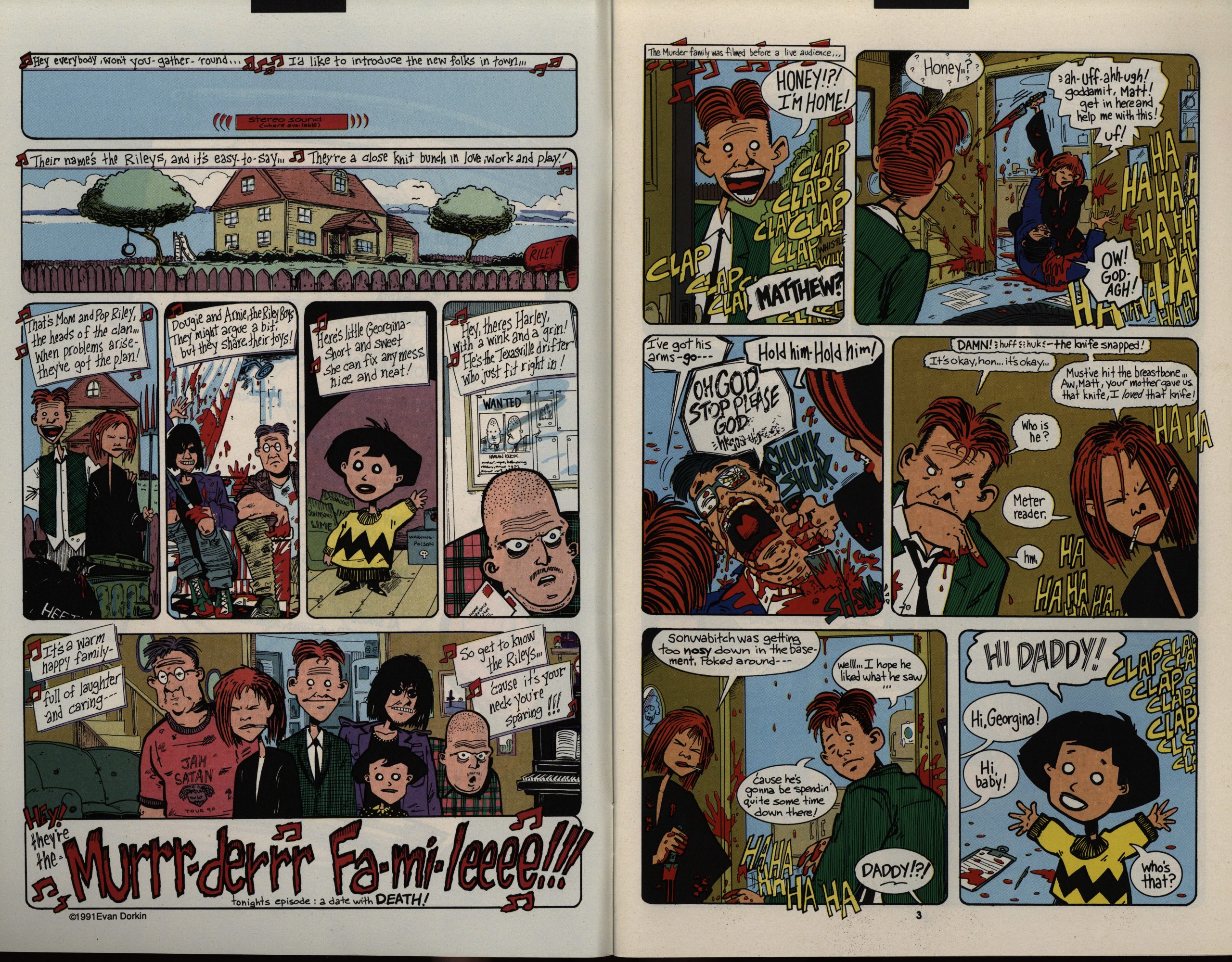 Anyway, we get a bunch of four to nine page pieces. There doesn’t seem to be any theme going here… for a title called “Epic Lite” you’d perhaps expect parodies of other Epic comics? Instead it’s a grab bag of … whatever the different artists usually do.

So we get the Murder Family from Evan Dorkin. I don’t know whether this is the first appearance of this unfortunate concept, but I seem to recall reading several of these strips, and they never get much further than what you see on the spread above. 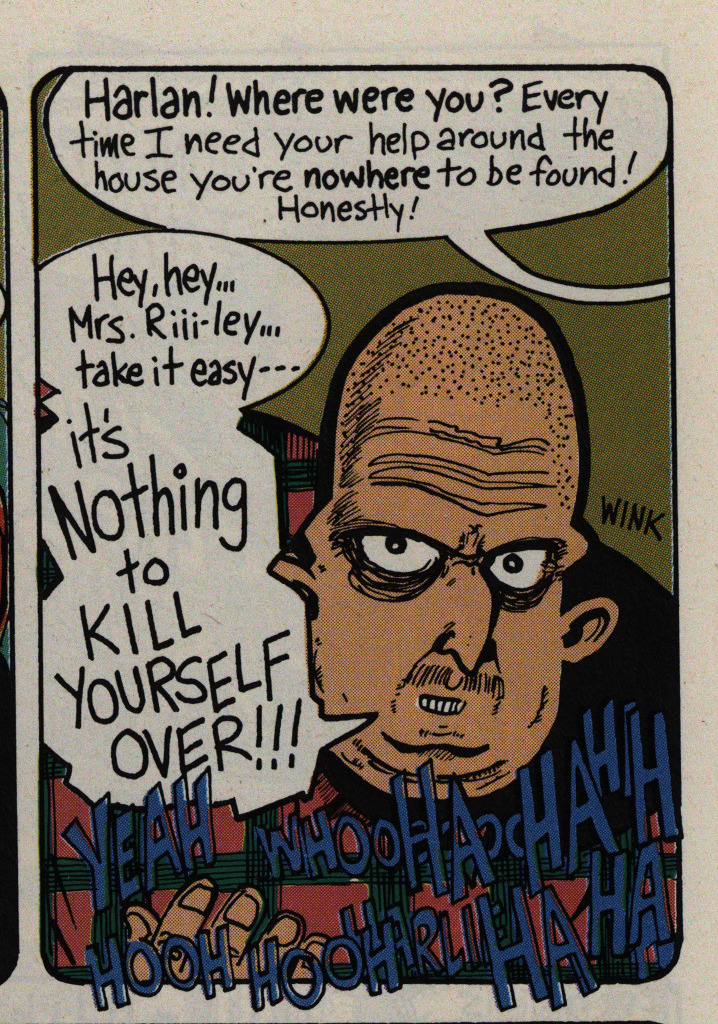 I guess the point is to demonstrate how unfunny sit-coms are? So we get a lot on non-jokes with laugh tracks. Oh, and plenty of slaughter. It’s deep. It’s an indictment of late stage capitalism, man. It’s like Haneke.

I mean, I think Dorkin is pretty talented, but Murder Family is just lazy writing. 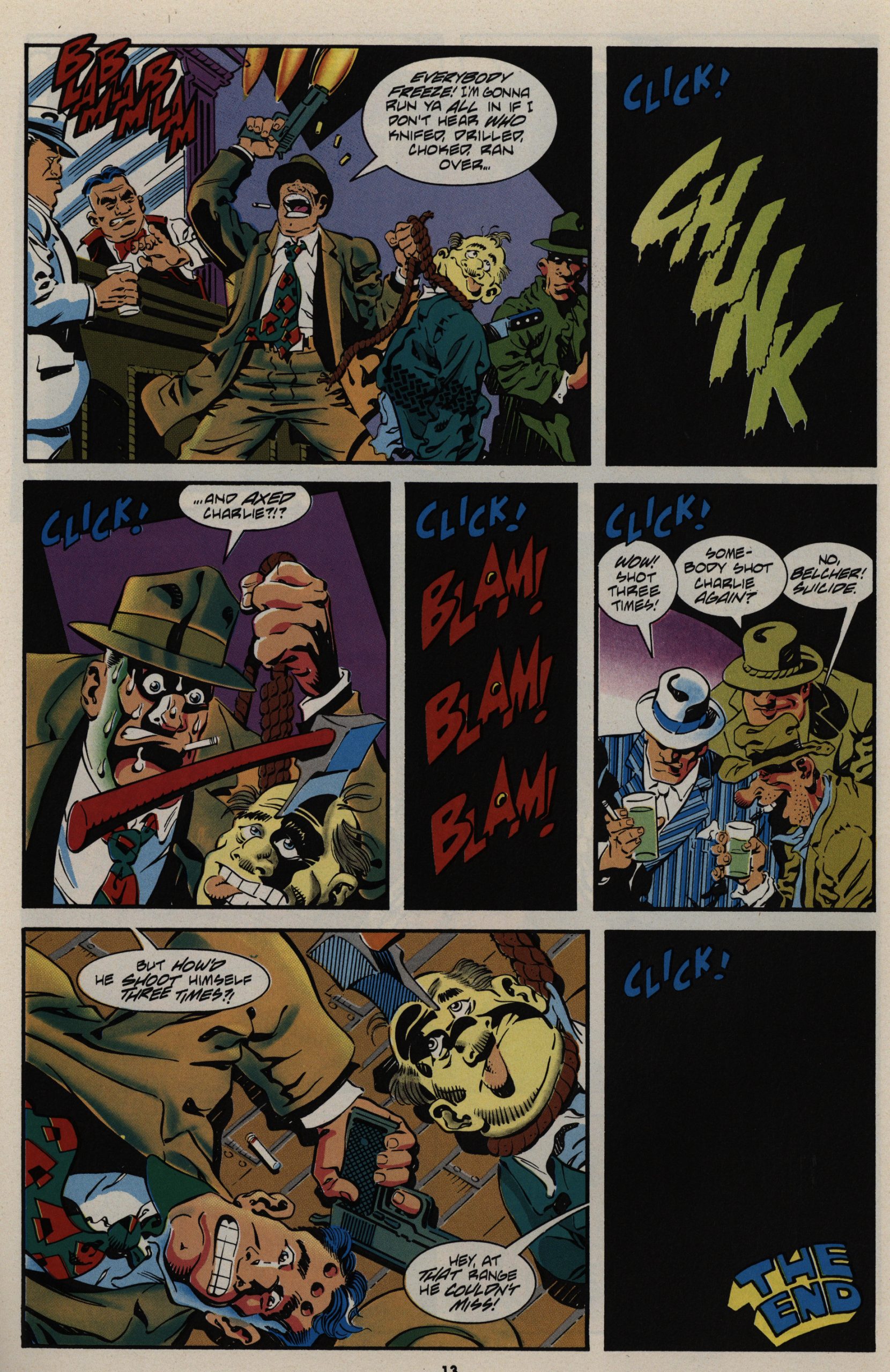 Hilary Barta and Doug Rice do a very well-drawn piece of absurdity. 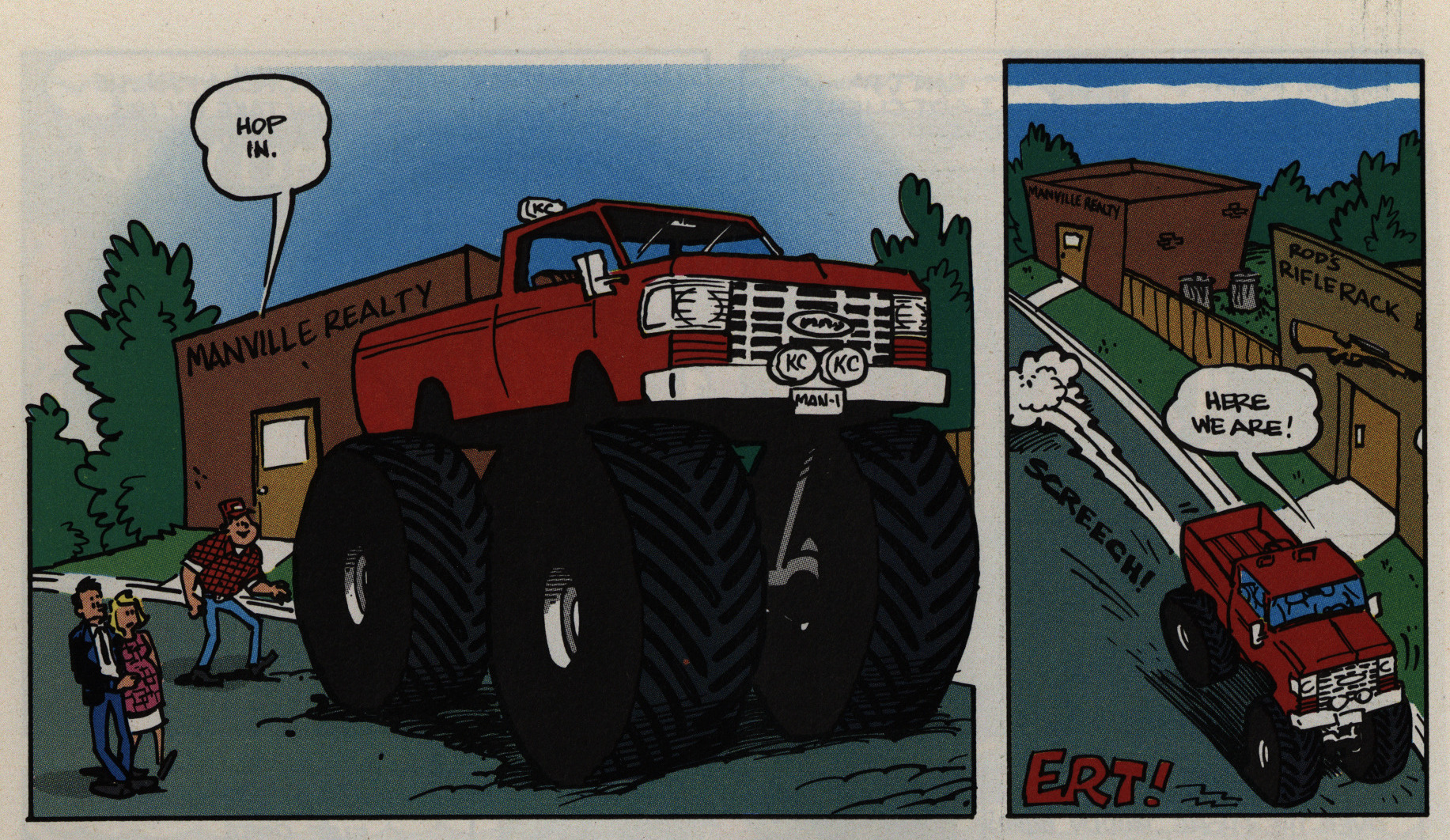 Scott Saavedra does a piece called “Manville” about how people who live outside New York are morons. 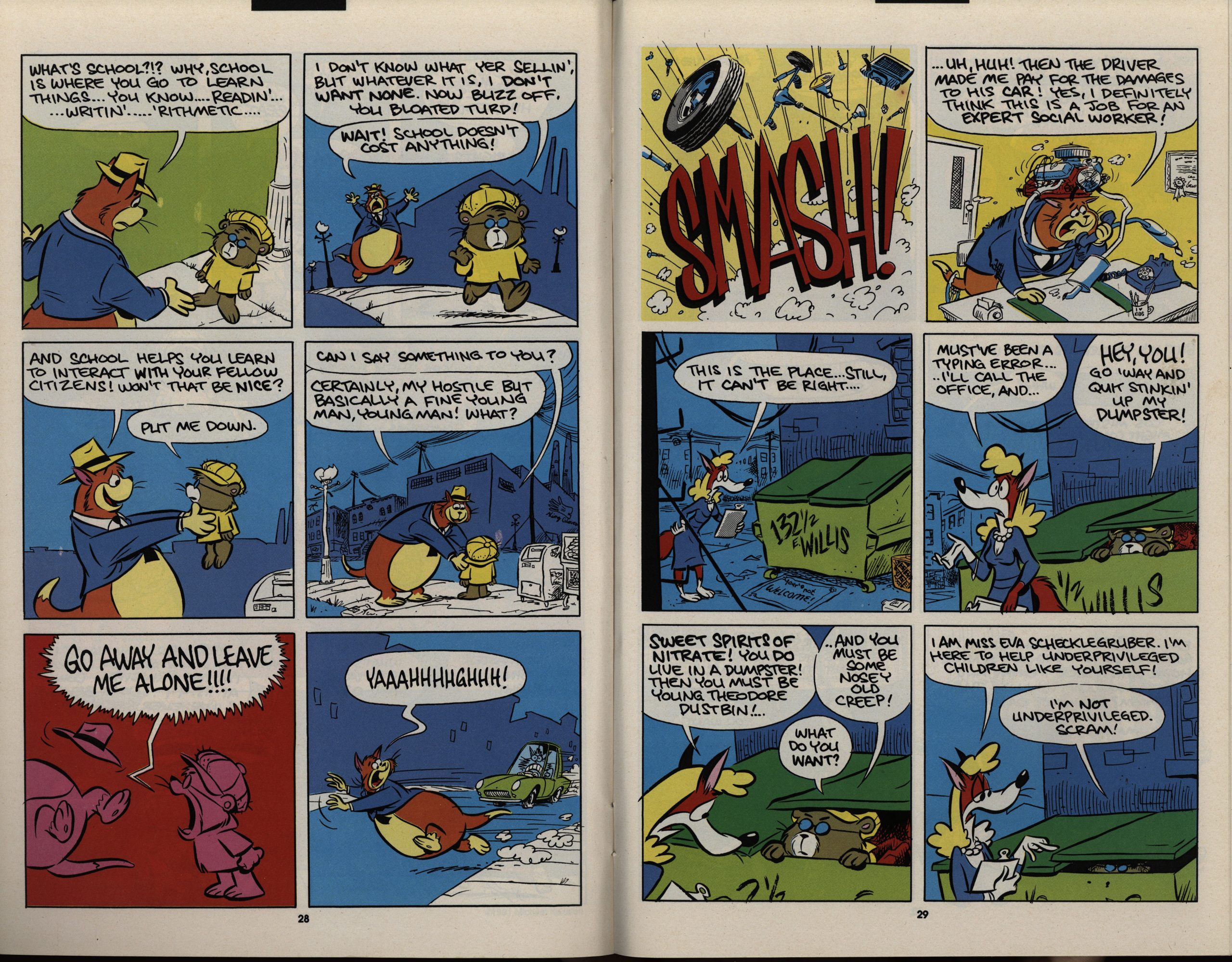 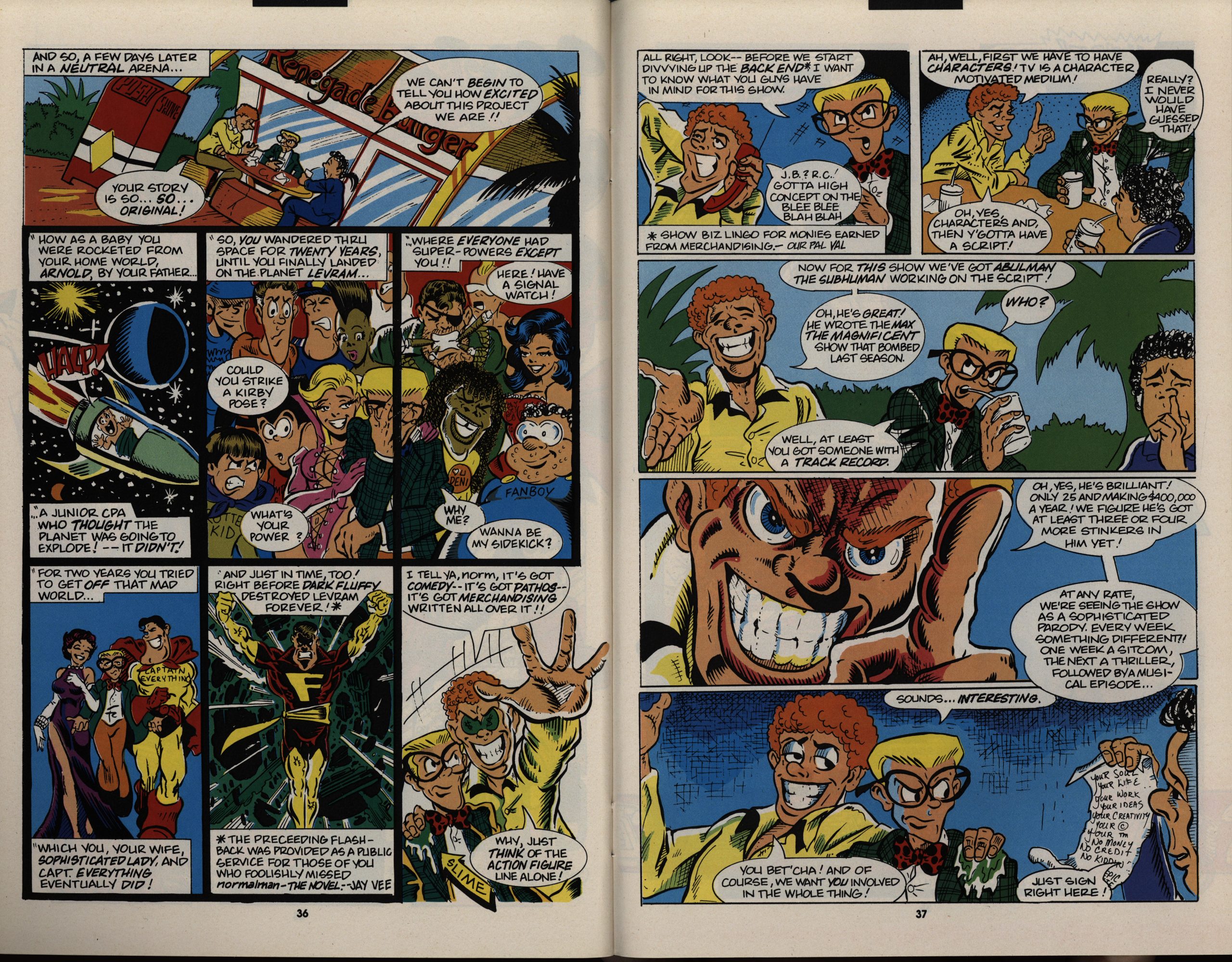 Jim Valentino does a normalman thing. What? And spends one page doing a recap of the series before spending the rest of the time on a generic spoof of those zany Hollywood types we’ve all seen before? Was somebody trying to make normalman into a TV series at the time? It has that feeling of undigested frustration… It’s not funny, in any case. 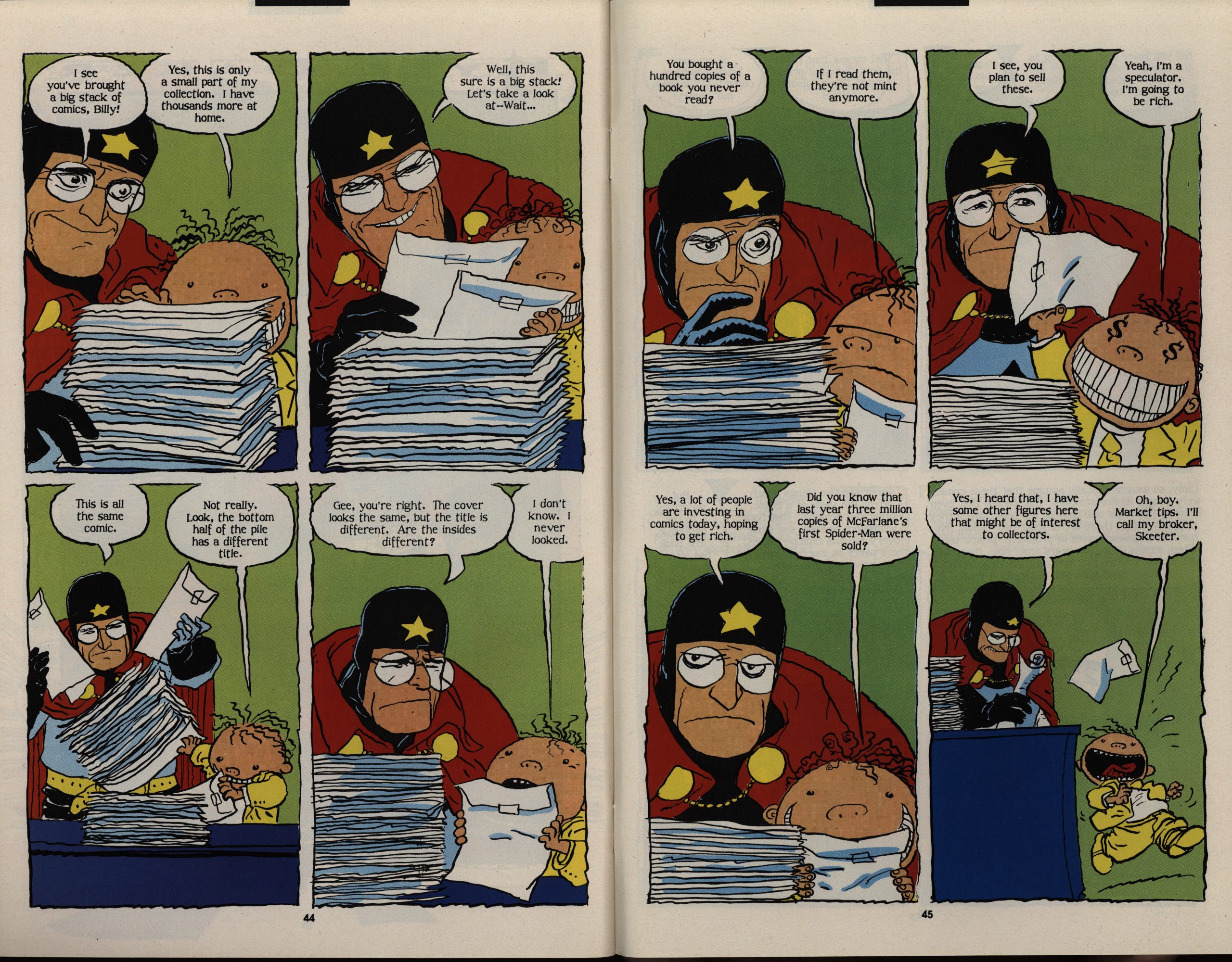 Kyle Baker sticks to his normal layout but uses a somewhat simplified style for his piece about… how people who collect comics as a financial investment are probably going to be disappointed.

It’s true, but that doesn’t make it funny.

What a strange collection of comics! It’s like Nicieza called up a bunch of the funniest people in the business (at the time) and ordered some pages from them, but told them to remove all the humour.

Marvel’s Bottom Ten: As long as
everybody’s talking about how great
Marvel is doing (and Marvel is do-
ing great), it might be interesting to
see what the company’s worst-selling
titles are. Here are Marvel’s ten least-
ordered comics for September, 1991,
according to the Capital City Inter-
nal Correpondence newsletter.
1) [lowest] Alf
2) Sleeze Brothers #1
3) Epic Lite
4) Barbie Fashion #11
5) Zorro
6) Conan Saga #56
7) Metropol #9
8) Barbie
9) Savage Sword of Conan #191
10) Knights of Pendragon #16
Note the lack of of super-hero titles
in the list. Pendragon comes close,
but I suspect its British origins
hampered its development in the U.S.
(Marvel recently announced that it
was being cancelled). Besides that,
what we have here are four licensed
properties (two of which are aimed at
young girls, one of which is based on
a cancelled TV show), three creator-
owned properties and two black &
white barbarian magazines that are
mainly aimed at the newsstand
market.

So this was Marvel’s third-worst-selling comic of the month? I’m not surprised, because anthologies rarely sell well. And humour anthologies?

This summer, the Epic Lite one shot
will be a $3.95 bookshelf comic fea-
turing humor “by the funniest guys in
the industry.” You’ll have to wait to see
just who those funny guys are,
though.

Aha! This was originally announced as being in a squarebound format, so I guess cutting it down to a stapled floppy was a cost-saving measure. And Baker sure was right about comics not being a good financial investment: 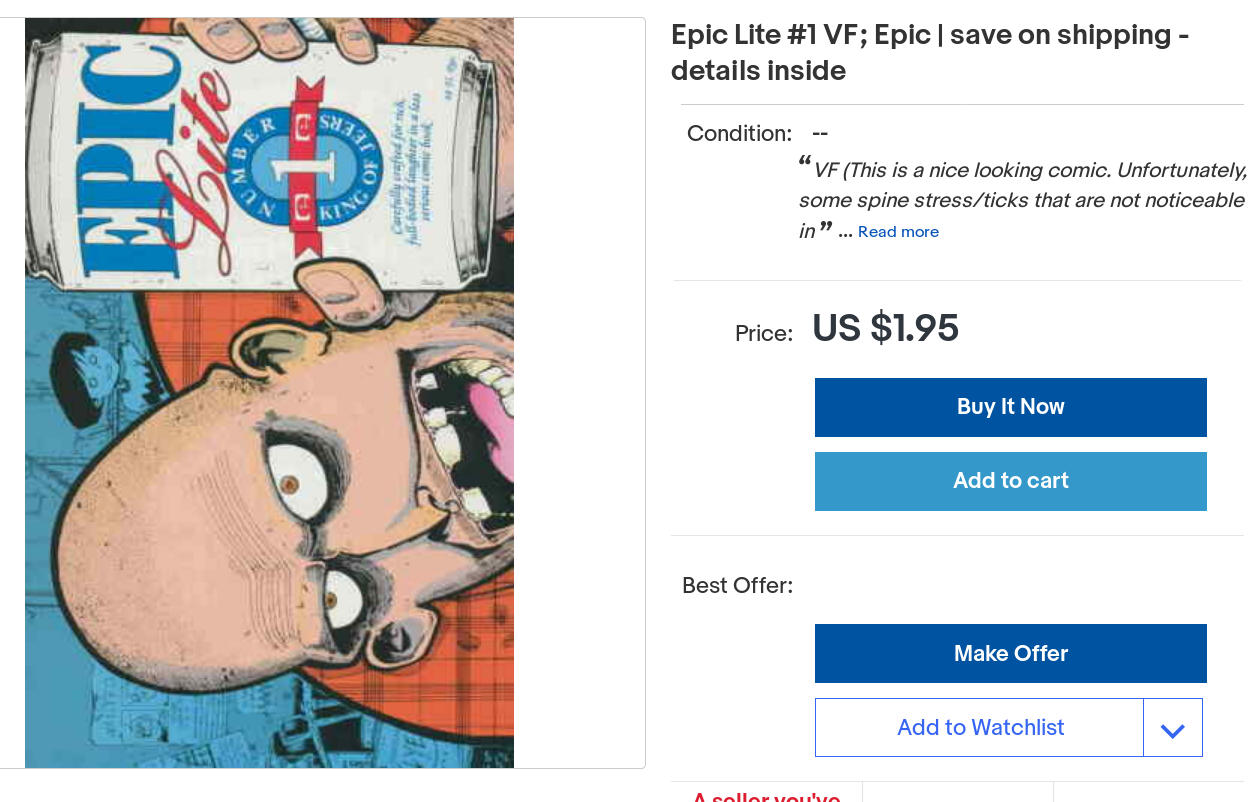 You can still find the copy at a nominal 50% off (adjust for inflation yourself).

I couldn’t find any reviews of the book on the web, but there’s this:

Epic Comics – Marvel’s “Adult” imprint – was known to take itself a bit too seriously. So, the slyly named “Epic Lite” was a rather welcomed comedy one-shot. Creators included Hilary Barta, Doug Rice, Mike Kazaleh, and Jim Valentino (doing one of his last Normalman strips). But the big draws for me were Evan Dorkin – debuting The Murder Family, which would become a staple of Dork – and Kyle Baker, whose Al Space strip is the gem of the book.

Al Space was basically a cynical old man who would dress up in a super-hero costume and break children’s hearts by introducing them to the realities of the comic book industry. In this episode, Al confronts a young speculator about his comic book “investment.”