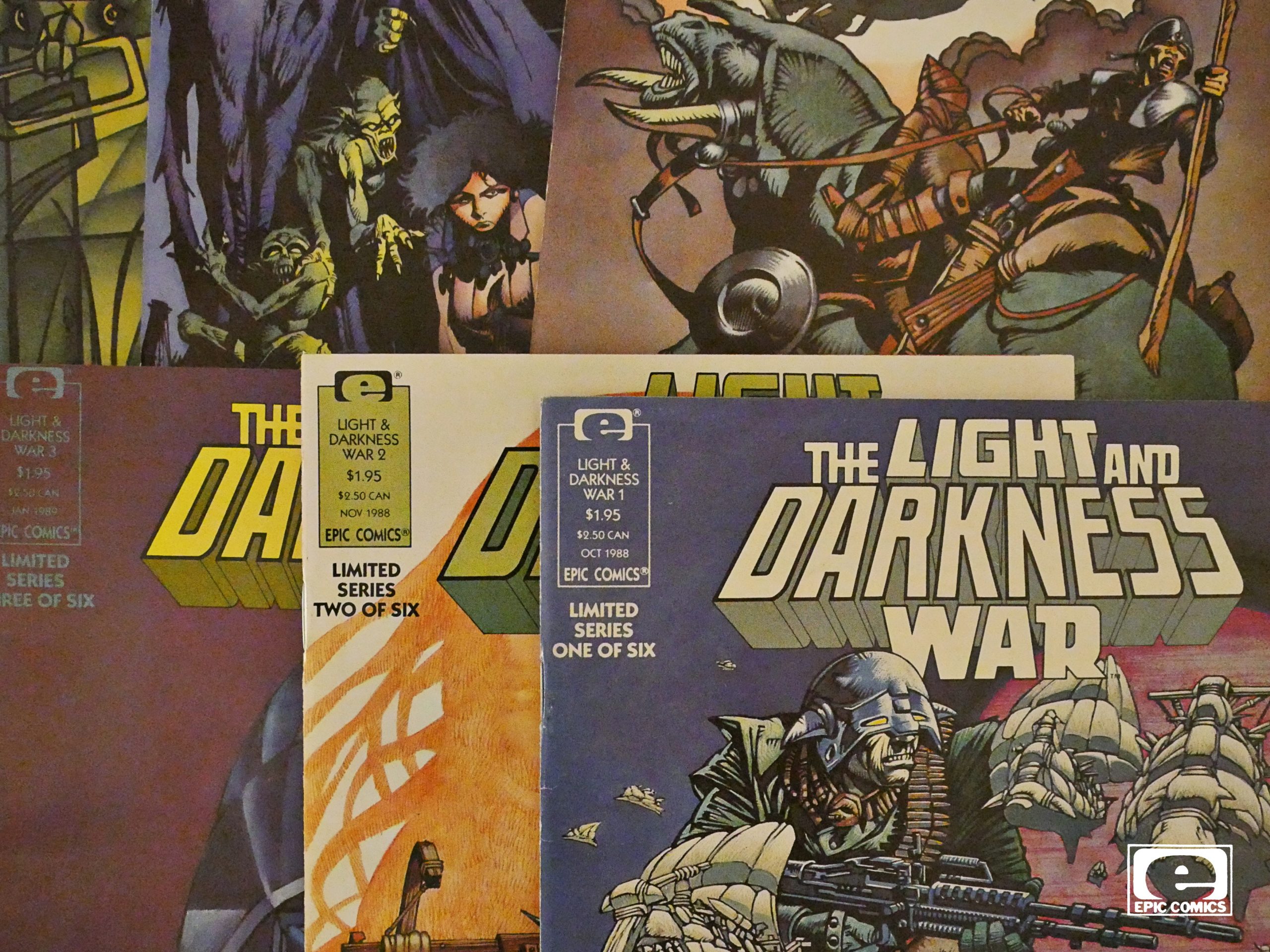 I assumed that this was part of the Shadowline universe Epic had started (just based on the name), but it’s not.

Epic sure was fond of six-issue mini-series around this time? 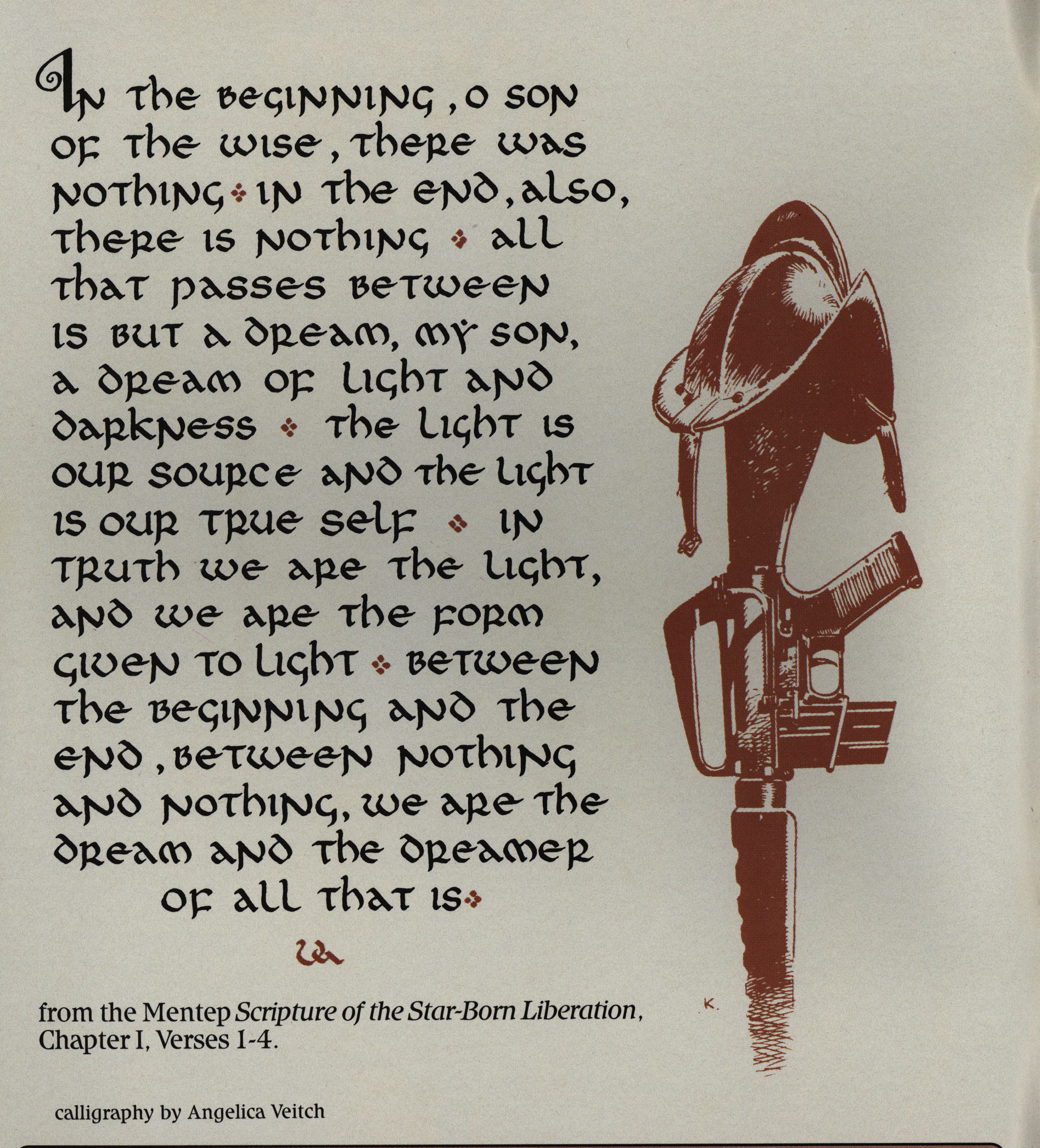 Well, OK, that’s not a portentous way to start a comic at all… 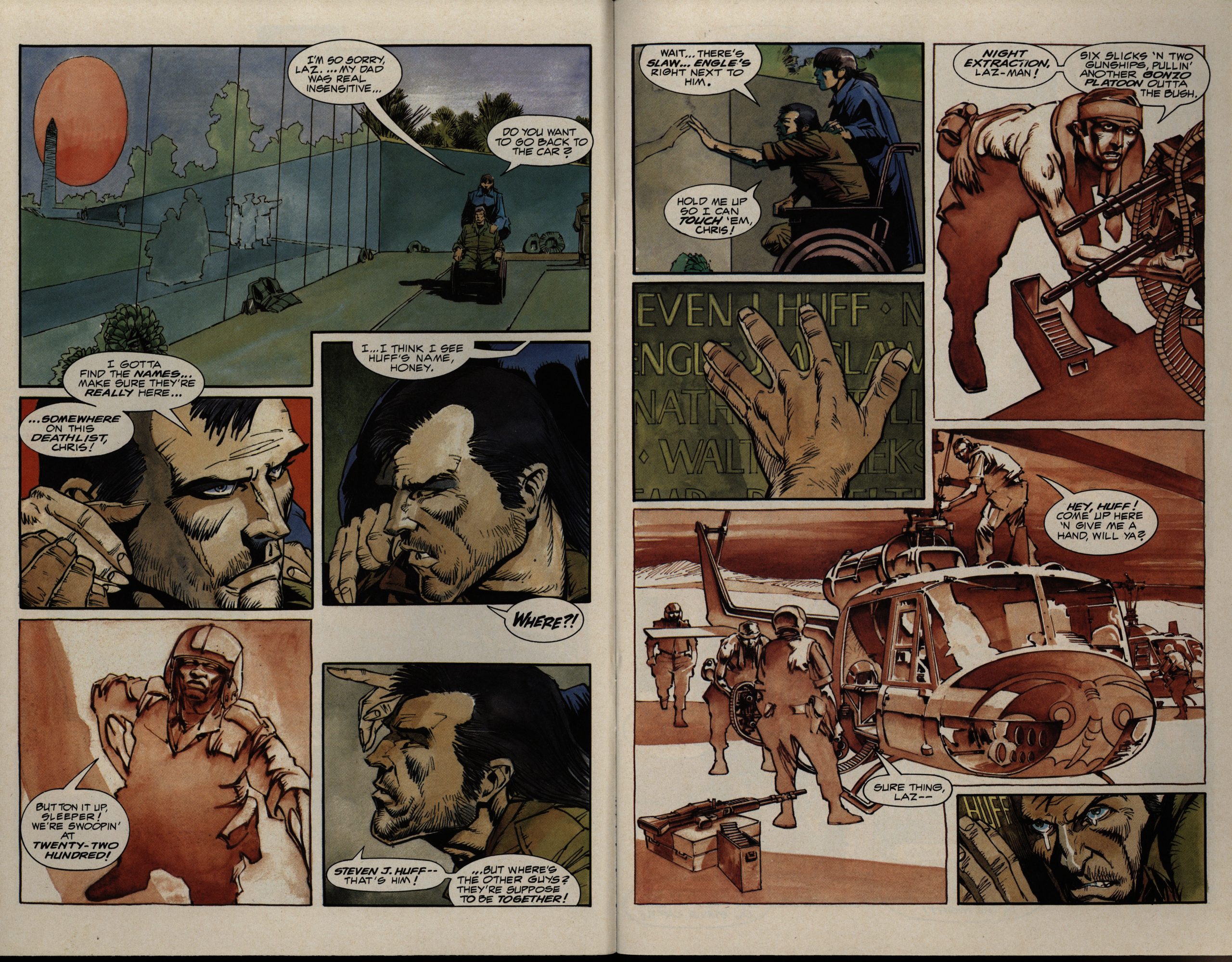 Huh! I don’t think I’ve ever seen anybody do that solarised look by hand before. Looks pretty nice. 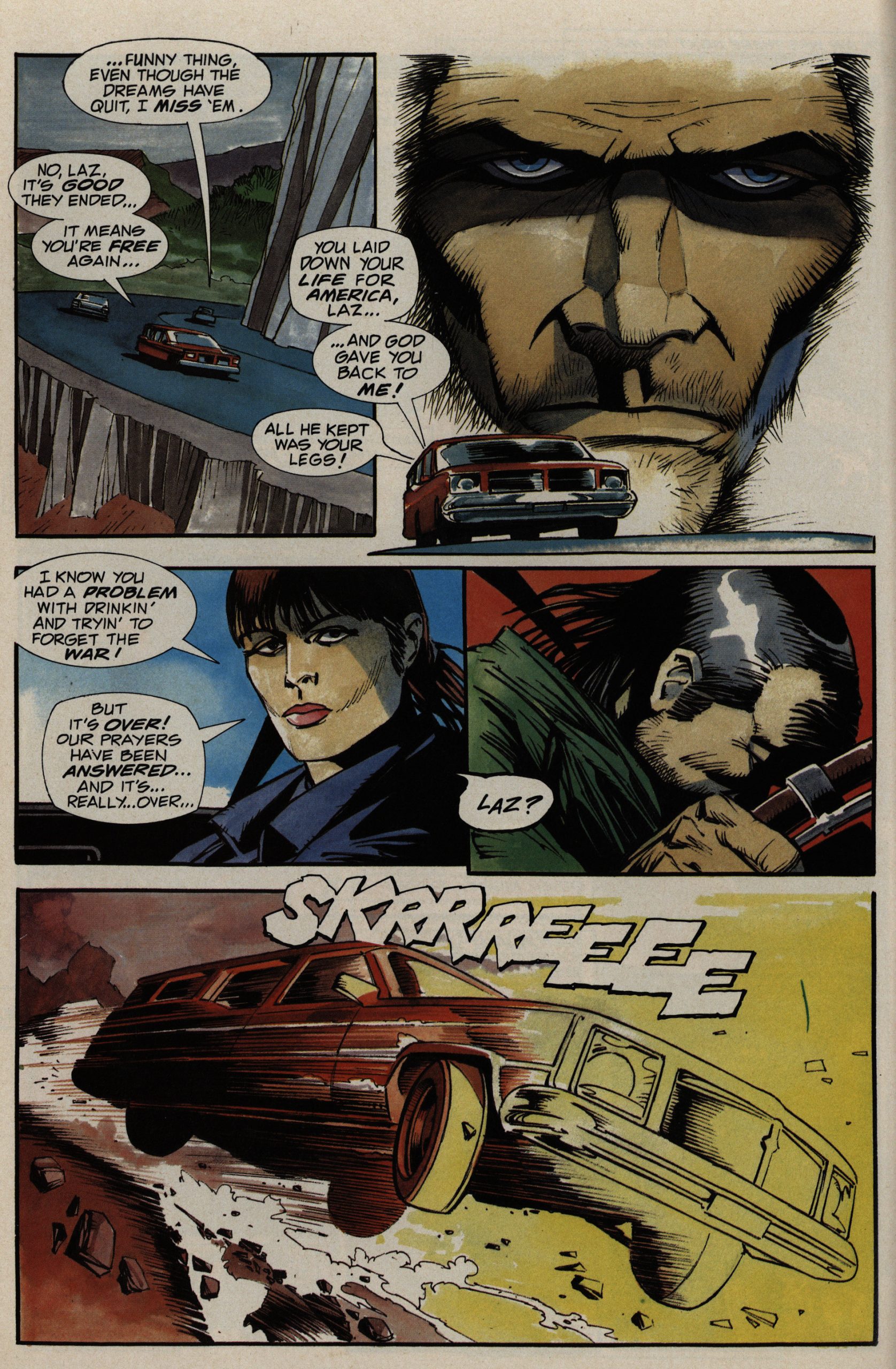 So, that guy (the Vietnam vet who was weeping and gnashing on the previous pages) has a tendency to black out and go unconscious, but he insisted on driving, so of course they have an accident. So at this point I was wondering whether Veitch is setting him up as a monstrously selfish villain… 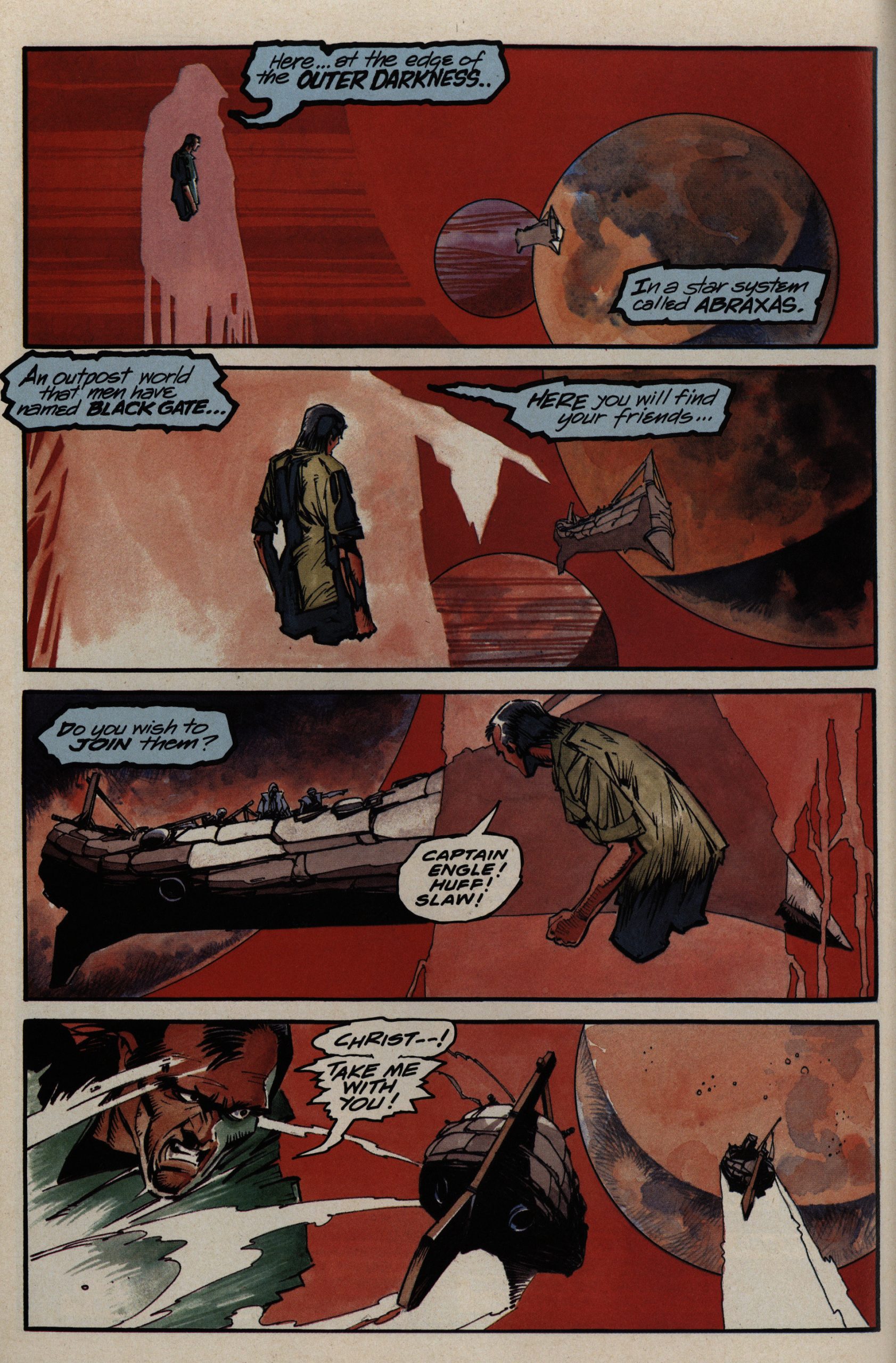 Hm! Abraxas? Didn’t Rick Veitch do a story called something Abraxerian? Is Tom Veitch related to him? Indeed! They’re brothers. 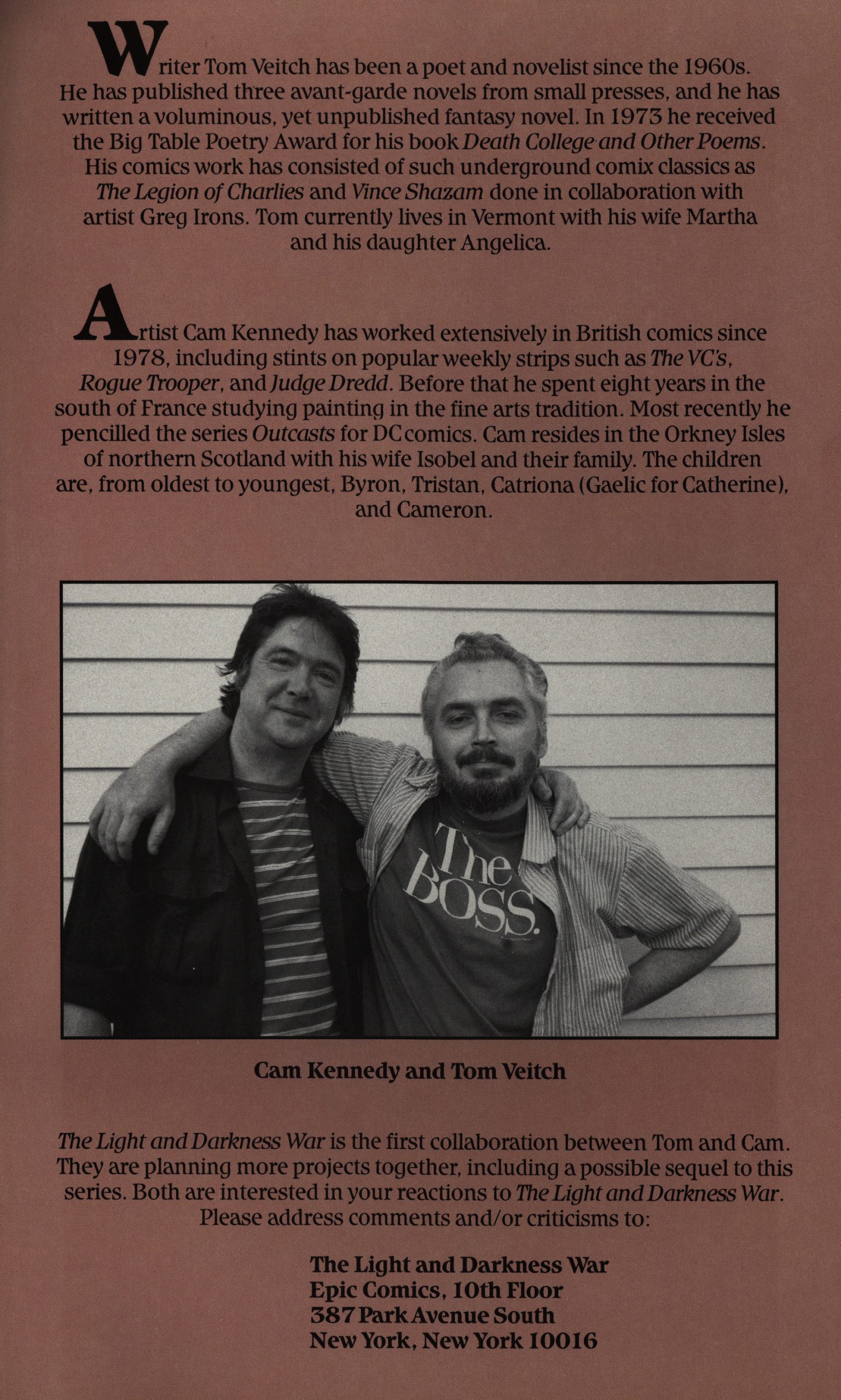 Oh, right. Tom Veitch did some undergrounds back in the 70s. That’s where I vaguely know his name from, I guess. 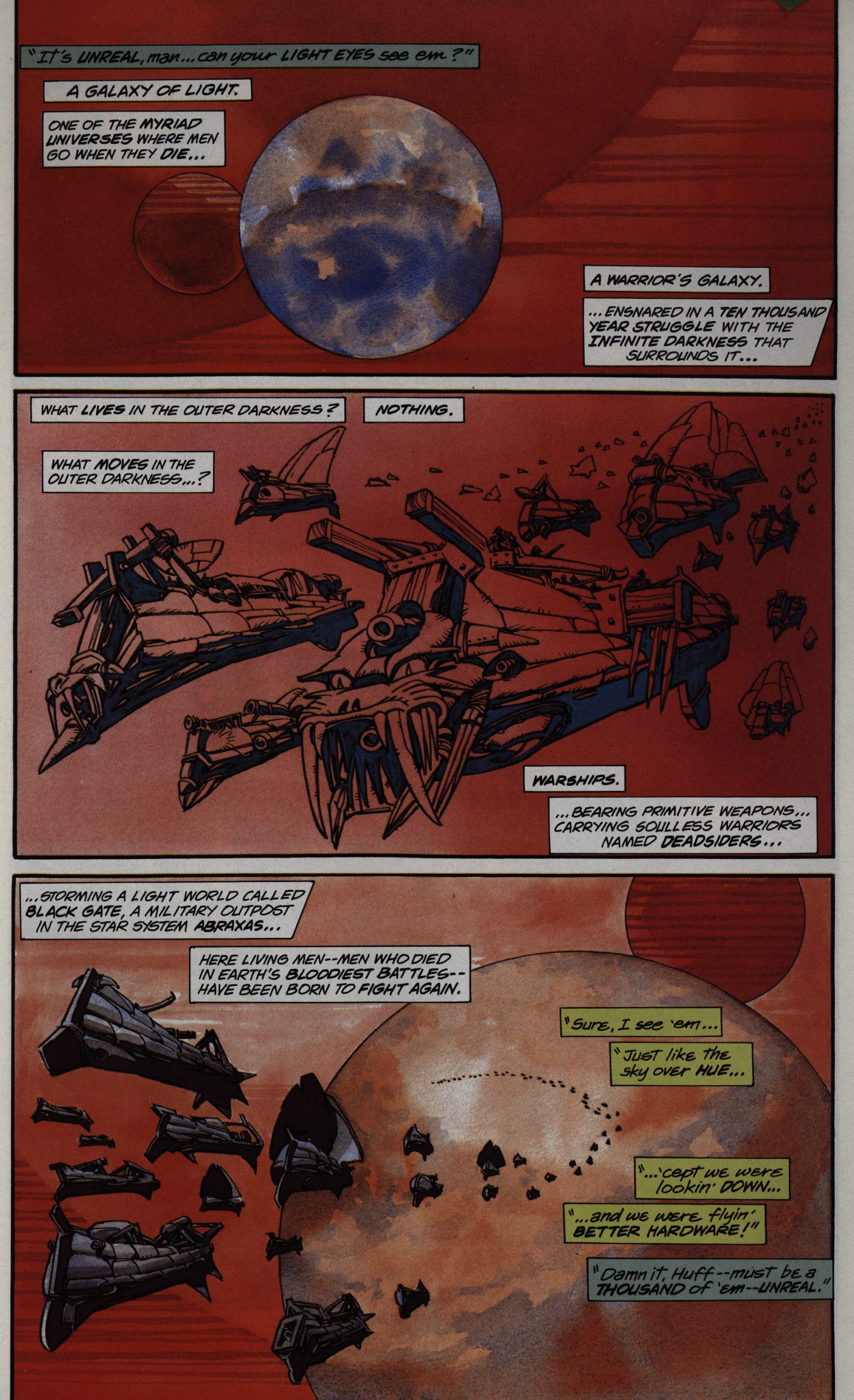 I’m not going to even attempt to explain the concept behind this series, but you can just read the recap page above. 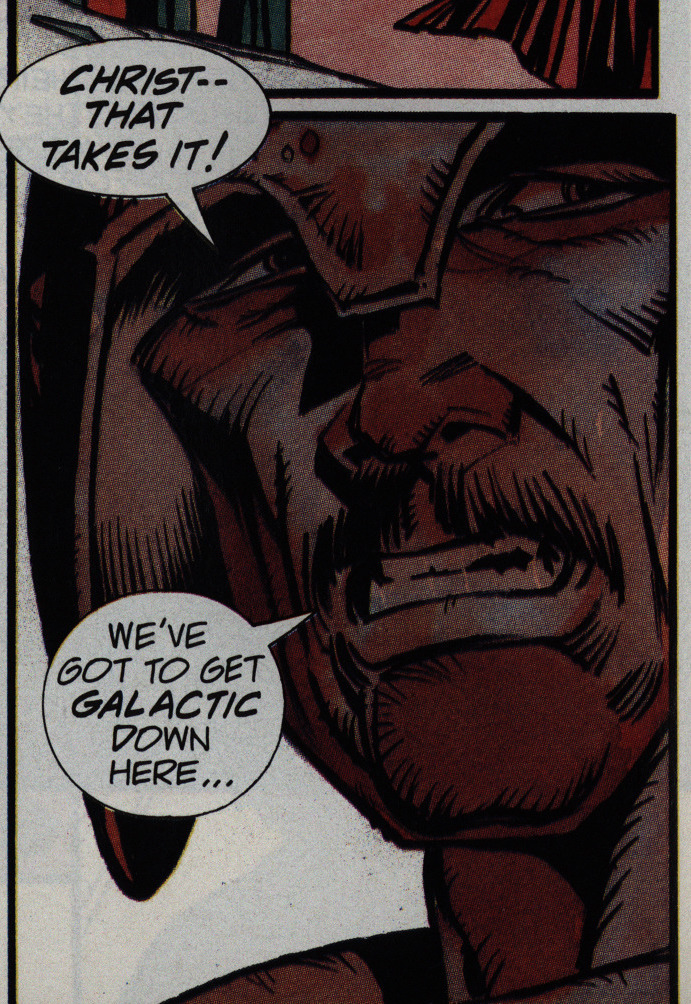 Because there’s absolutely zip about this that interests me. There’s basically no characters here, just cardboard cut-outs; the artwork is not anything to get enthusiastic about; the storyline has the structure of porridge; the attempts at repartee are reliably head-scratch-inducing (“We’ve got to get galactic dow here”?)… 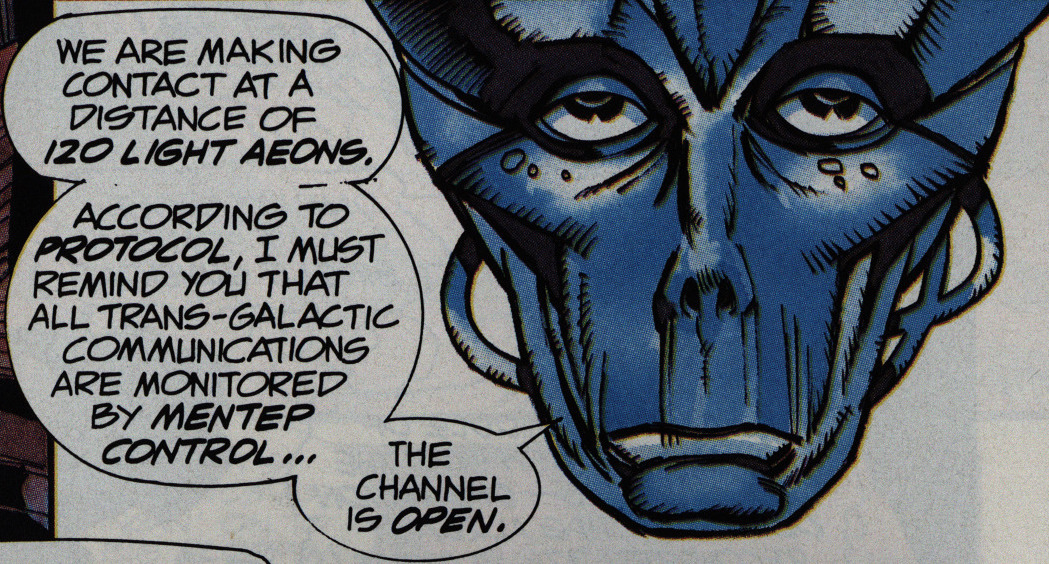 … the world building feels paper thin (like everything Veitch has thought up will end up on the page); and… “120 light aeons”? That’s either a really big universe, or it’s the other meaning of “aeons”. 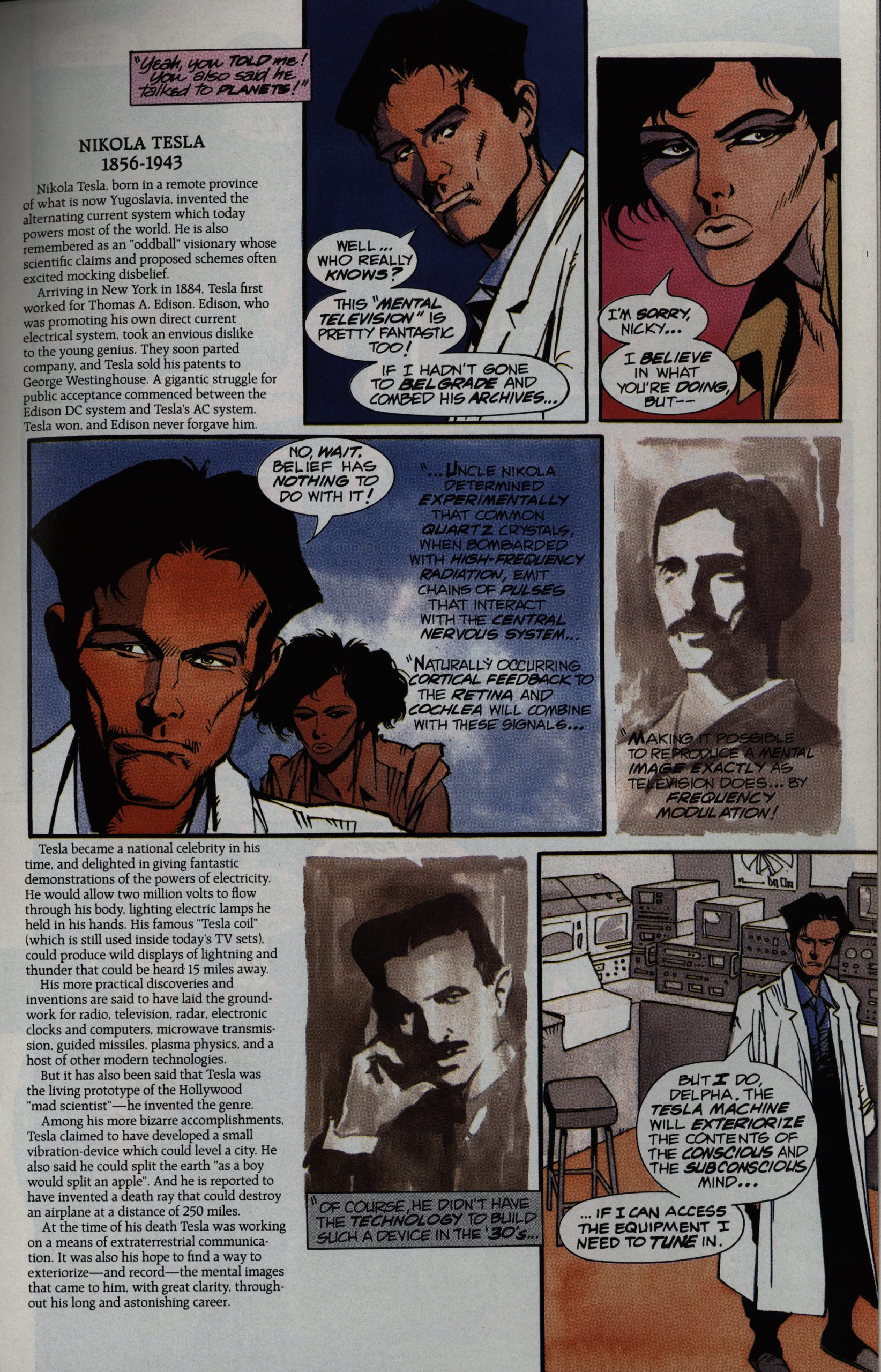 And, OK, using Nikola Tesla as one of the heroes was probably somewhat original back in 1988. These days it seems like you can’t make a sci-fi thing without having Tesla as the hero. The annoying thing about it is that it always feels like they’re making this big reveal. “No! *gasp* Don’t say it isn’t so! Didn’t Edison invent all those things!?!? No!” At this point it’d be more controversial if somebody did a sci-fi thing where Edison was a good guy.

But, OK, I guess you can’t blame Veitch for that. 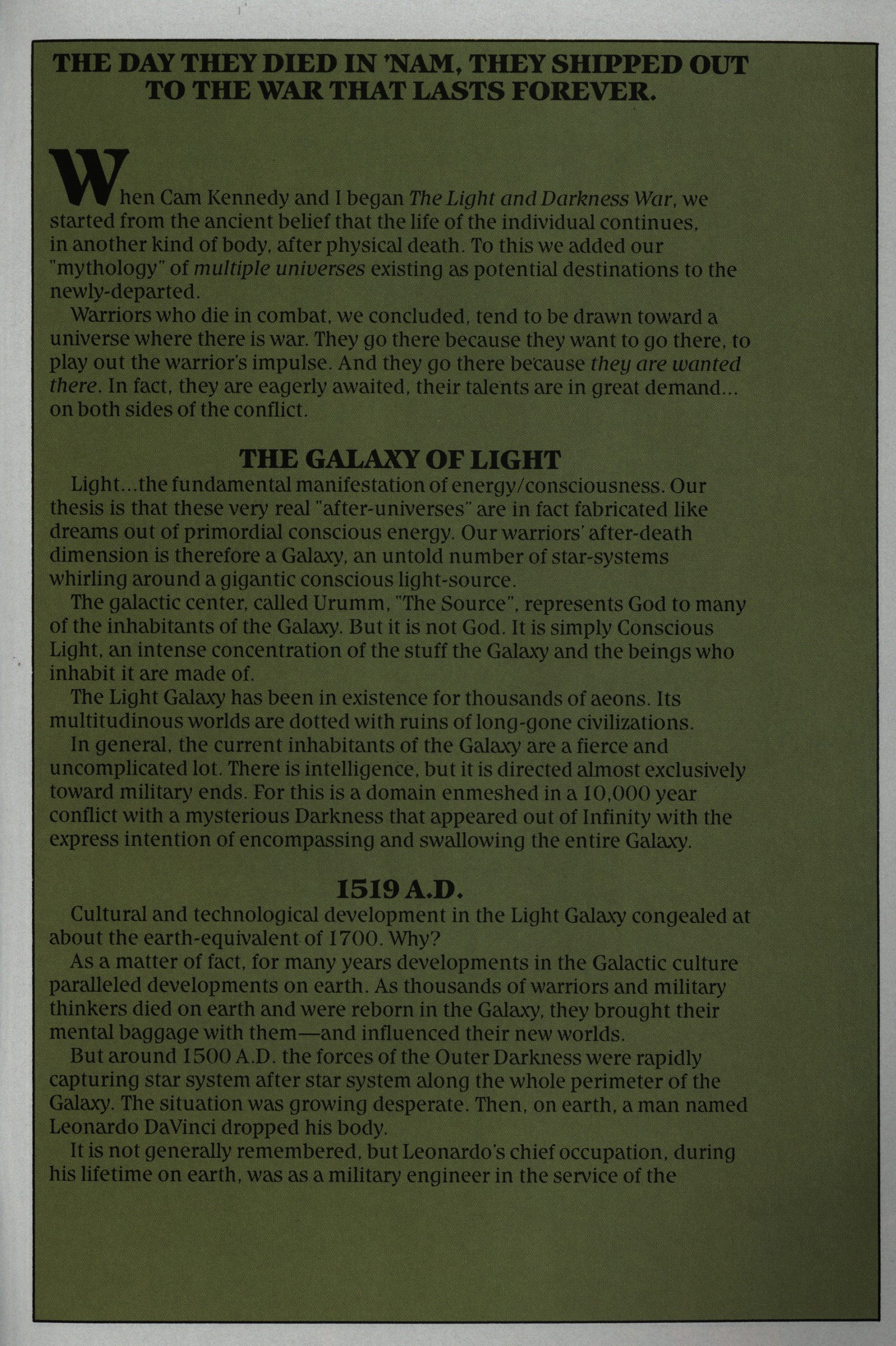 Ah, right; leave nothing off the page: We get a series of text pieces that explain everything about this universe. In the most dull way possible. 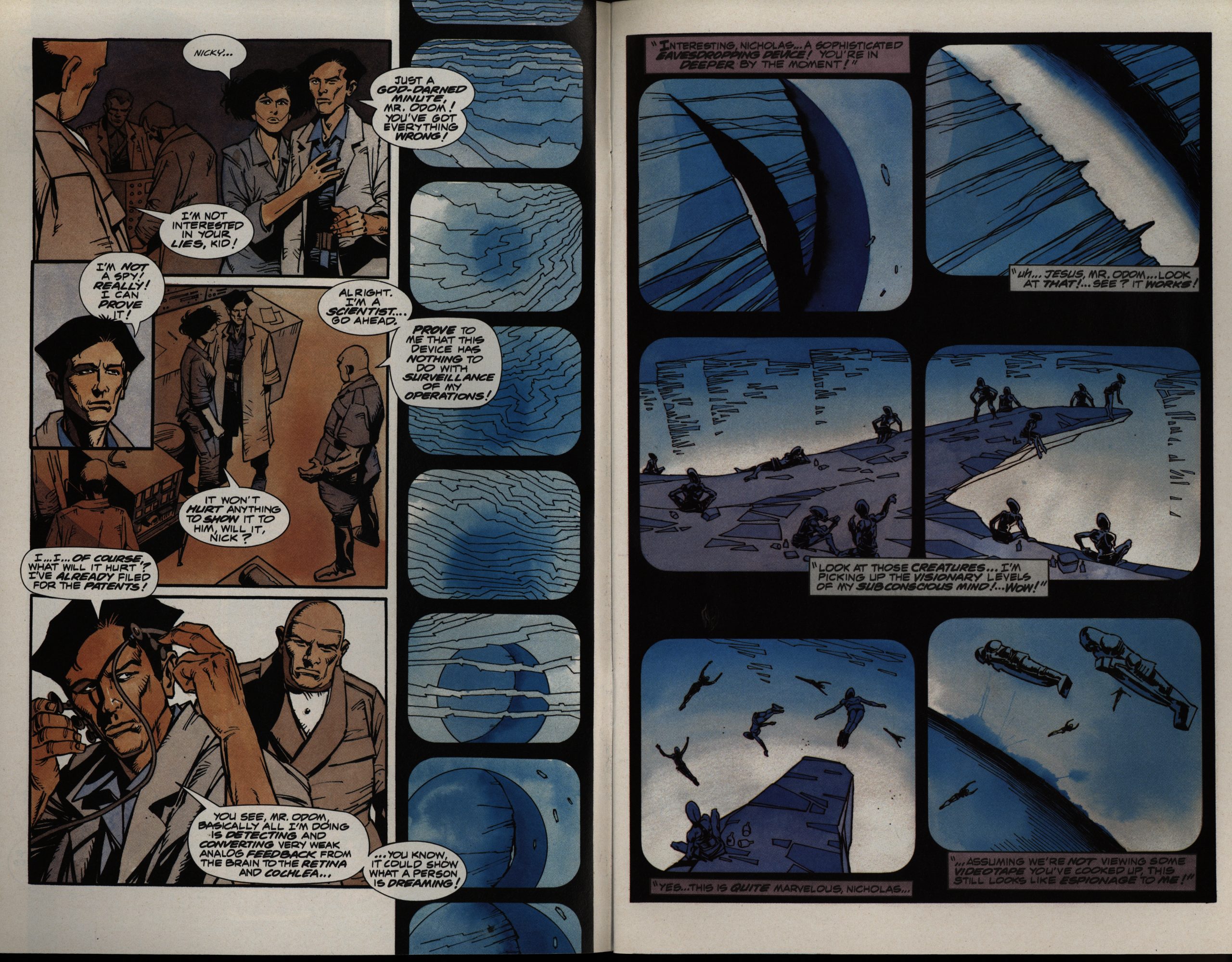 But, OK, there are some bits that kinda work, like the mental TV thing that spans the universes (and then turns into a physical conduit). That felt a bit inspired. 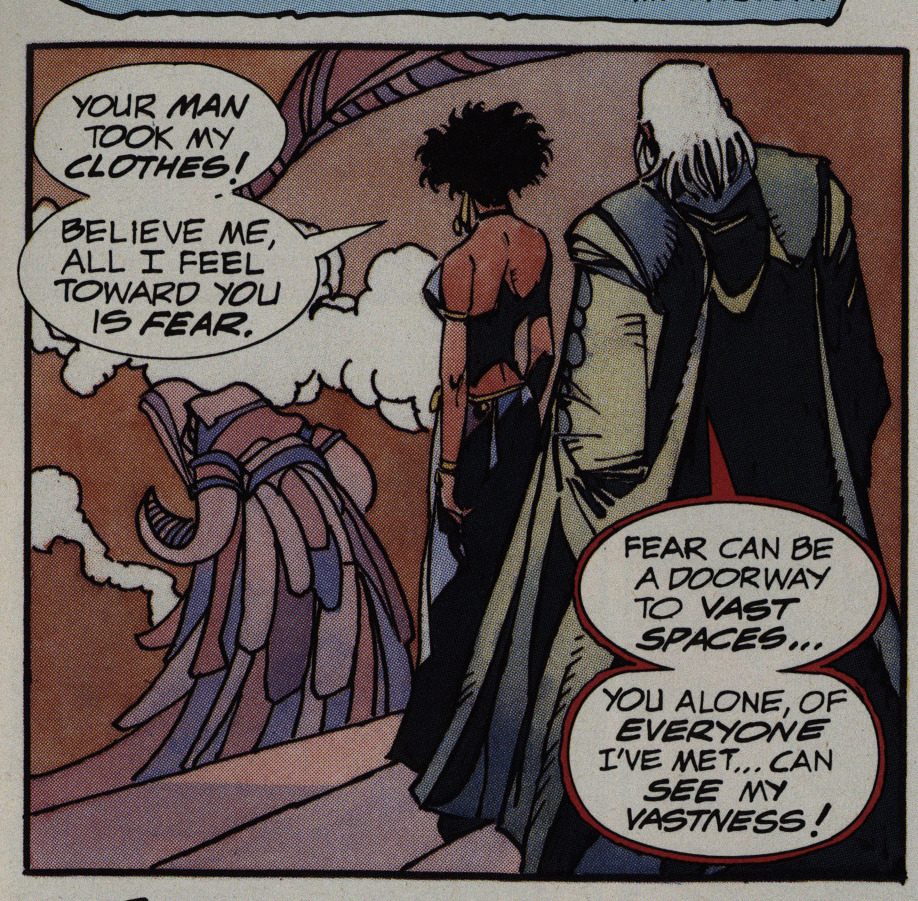 And everybody loves a dick joke. 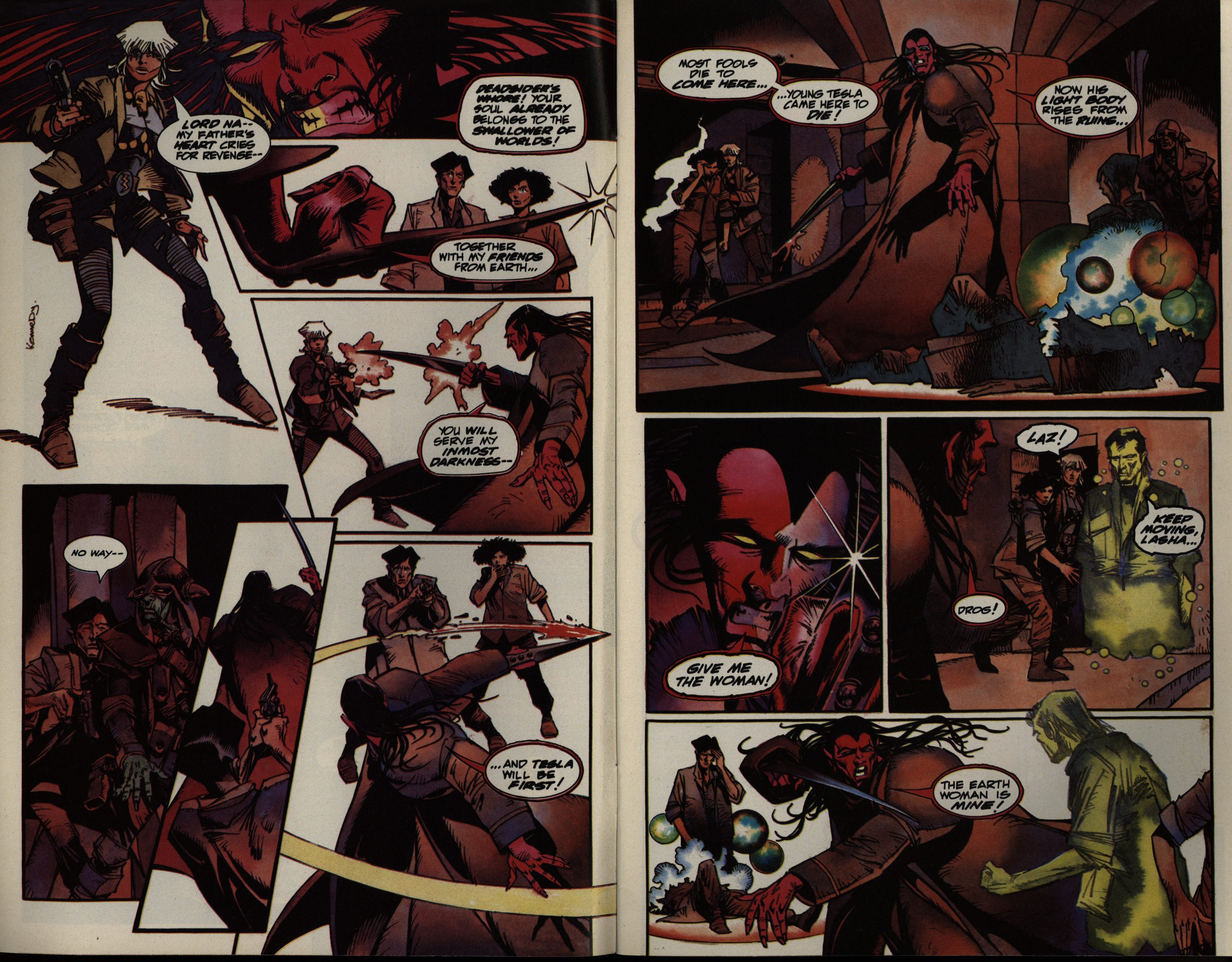 The final issue arrived almost half a year after the previous issue… which isn’t that unusual for Epic: Perhaps with the end in sight, and orders from the comics shops for the final issue in, they just… relax… 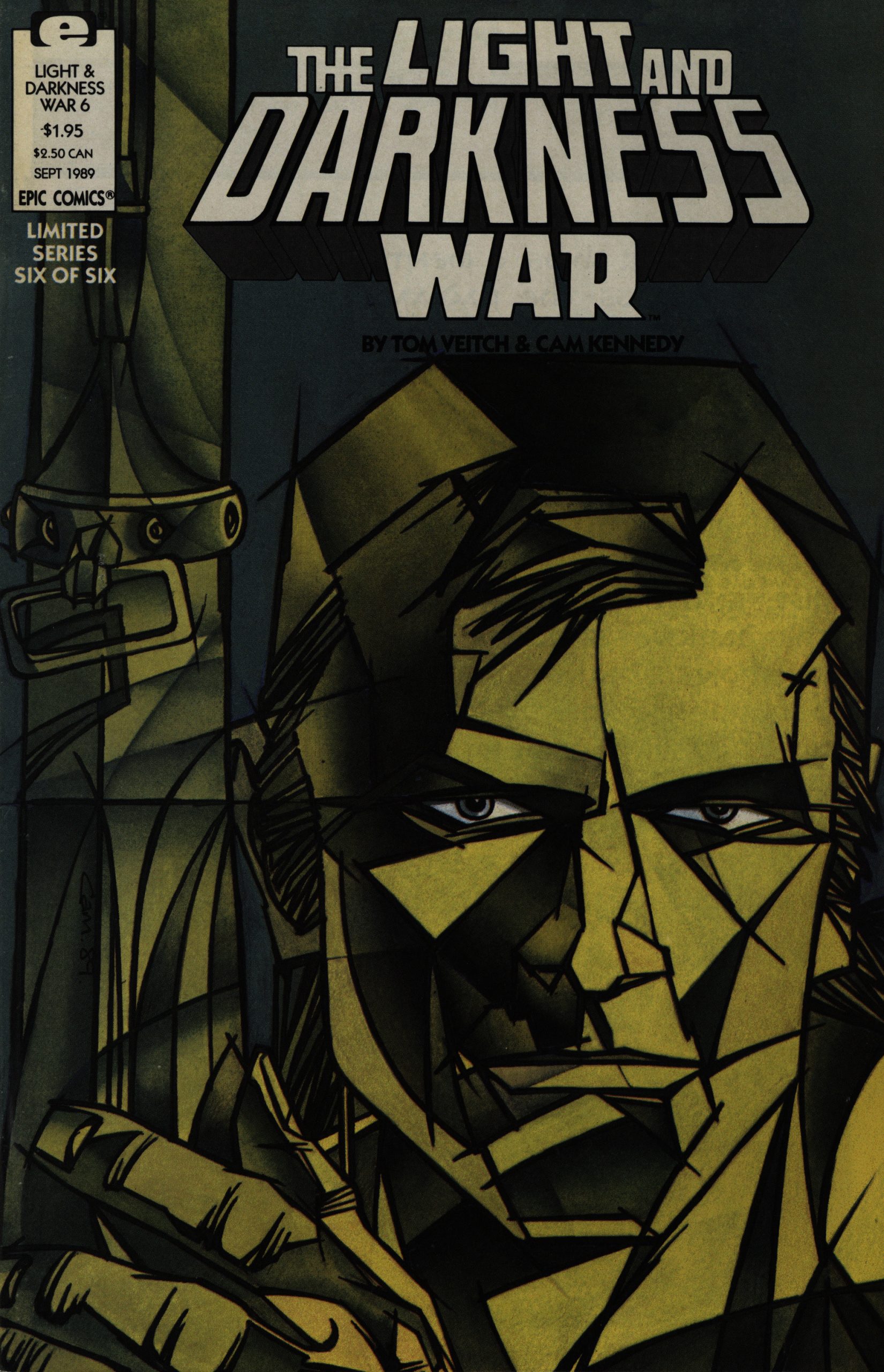 It’s got the best cover of the bunch.

And let’s go out on the best panel in the series.

Writer Tom Veitch says that the book
is progressing nicely and that artist Cam
Kennedy is getting even better as his
imagination focuses in on the events of
the books ahead.
It should be noted that there could be
a second story featuring the survivors of
The Light and Darkness Wår, if
response (sales) warrants.
To this end, Veitch says that a second
adventure has already been plotted and
“it is based on a mind-boggling concept
that, as far as we know, is completely
original! In fact, the concept is so good
that we are keeping it completely secret
until we know how this series does.”

There never was, but Titan published a collected edition in 2015.

I could find no review of this book from the 80s, but here’s a newer one:

This is a work that’s stayed with me for over two decades. The list of books that have managed to have that kind of lasting impact on me is dreadfully short. At the time, there wasn’t really anything else like The Light and Darkness War on the shelves (in North America, at least), and I was immediately entranced by its lurid depiction of a brutal never-ending conflict at the edge of forever.

This is not necessarily a comic I would have picked up at first glance, but by the end it made me a believer and I did enjoy it. The story is quite lengthy and you feel it going through, but the drawings and the overall story being told beckon the reader to look closer and continue.