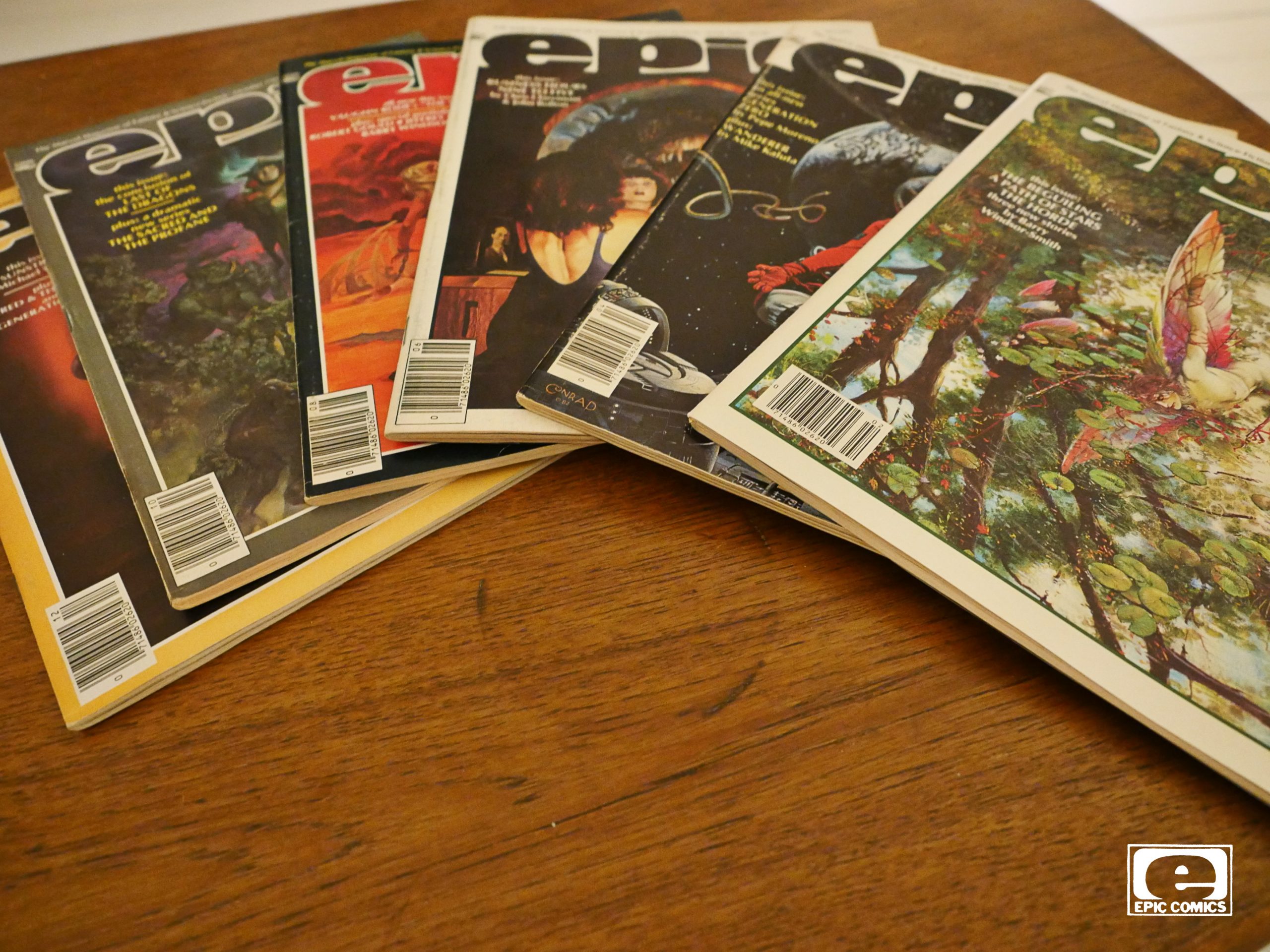 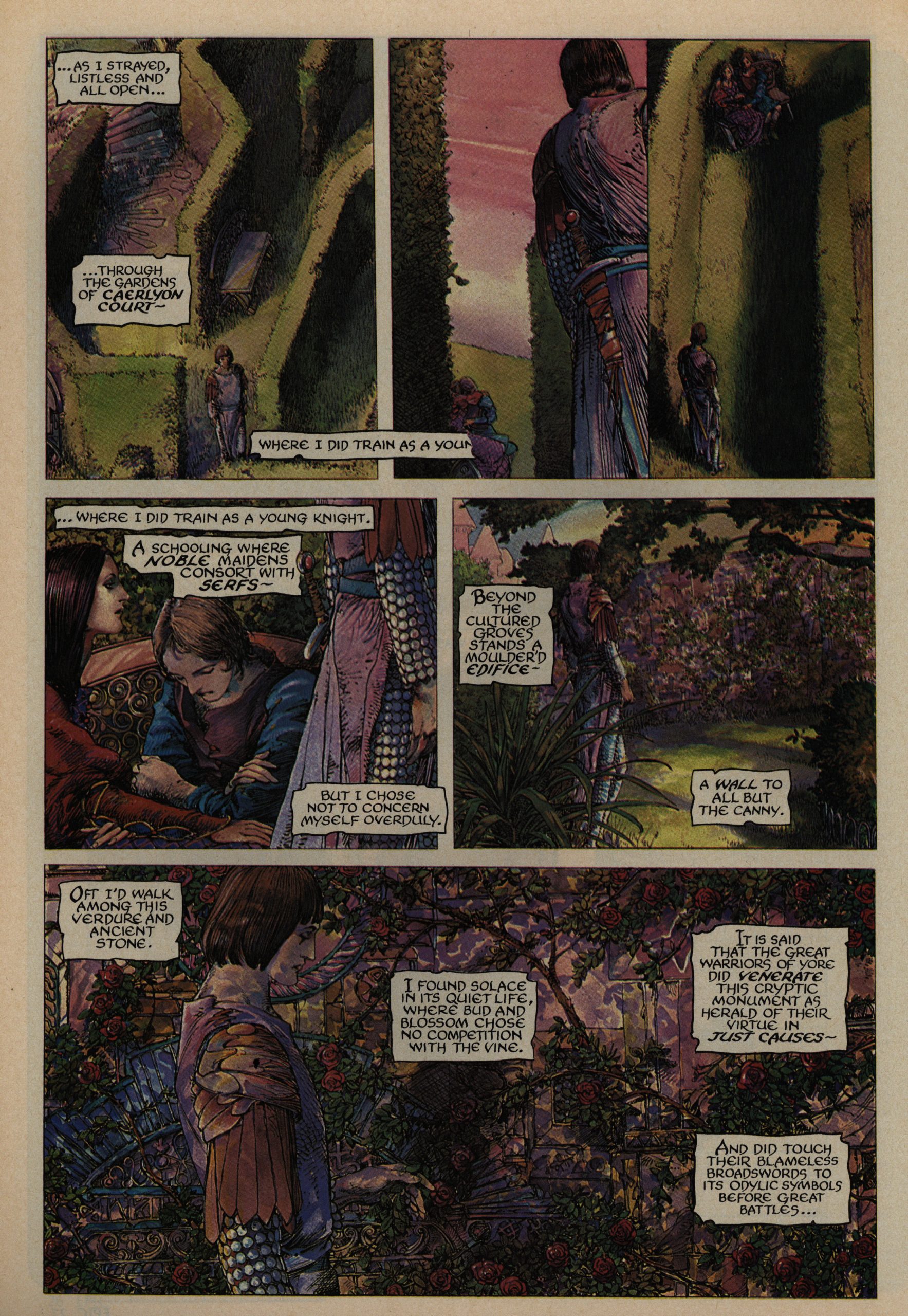 After the success of having a long, complete-in-one story in an issue in the near past (the Elric thing), I thought Goodwin was going to continue doing stuff like that. But in this issue we instead get three Barry Windsor-Smith pieces, which… I guess… gives you a bit of the same feeling (i.e., something more than just a bunch of random short pieces). 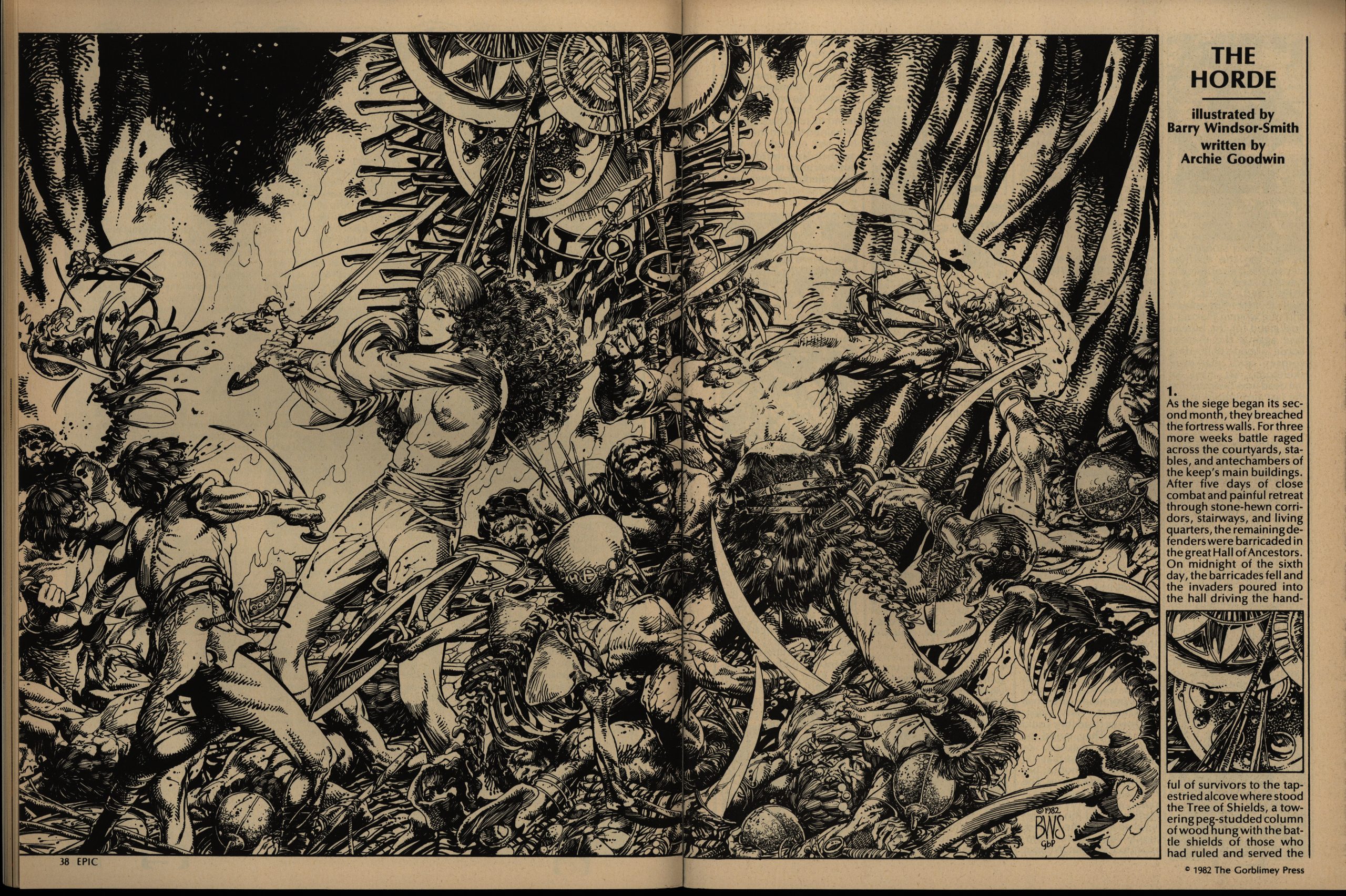 But one of the things in the BWS section is this. Which is a thing I thought EI had completely ditched by now: Somebody writing a story based on a single drawing. Even Goodwin himself, normally a reliable writer, can’t make it work. 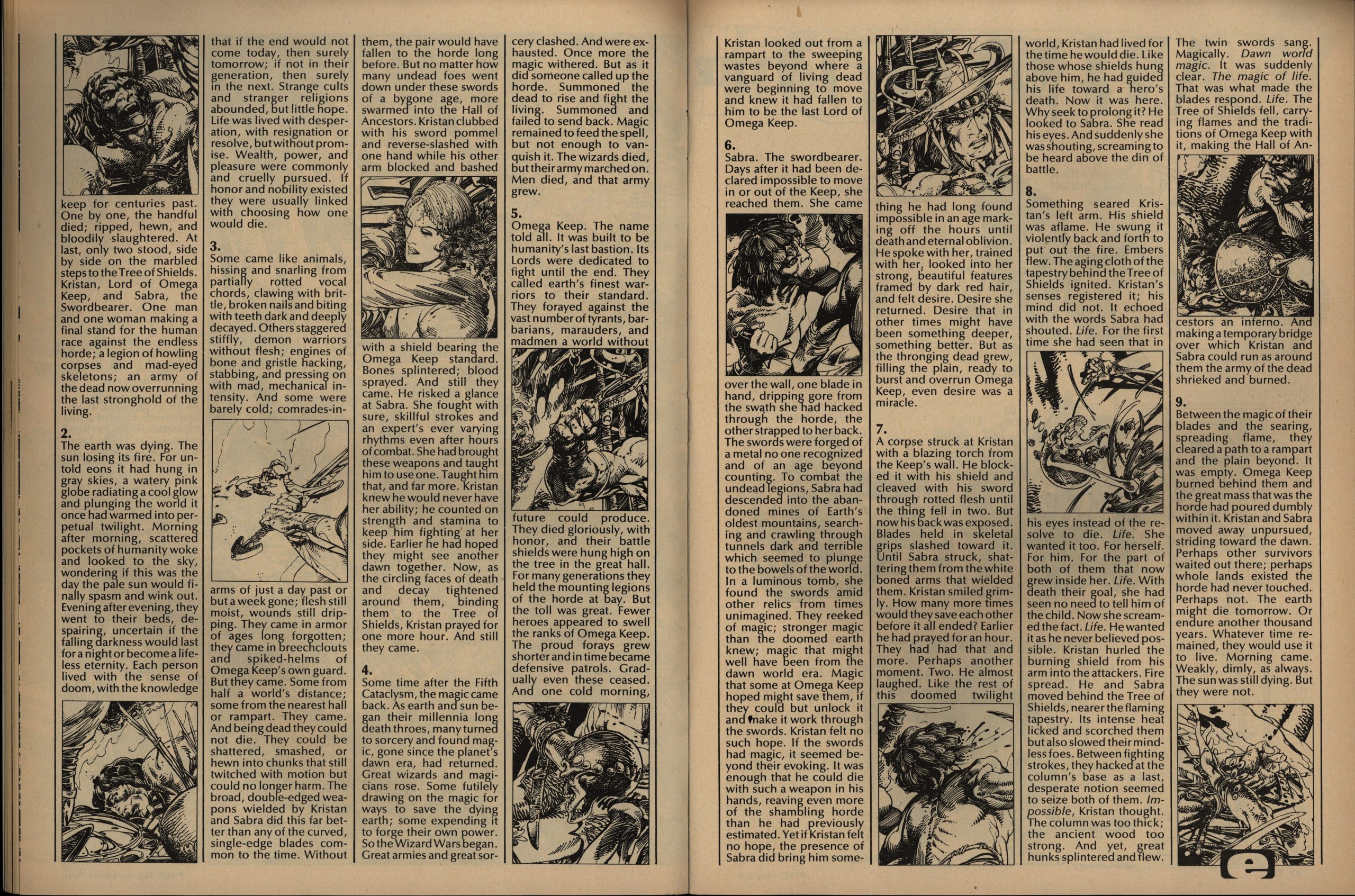 Even by cutting up the aforementioned artwork and putting his text in between the bits. 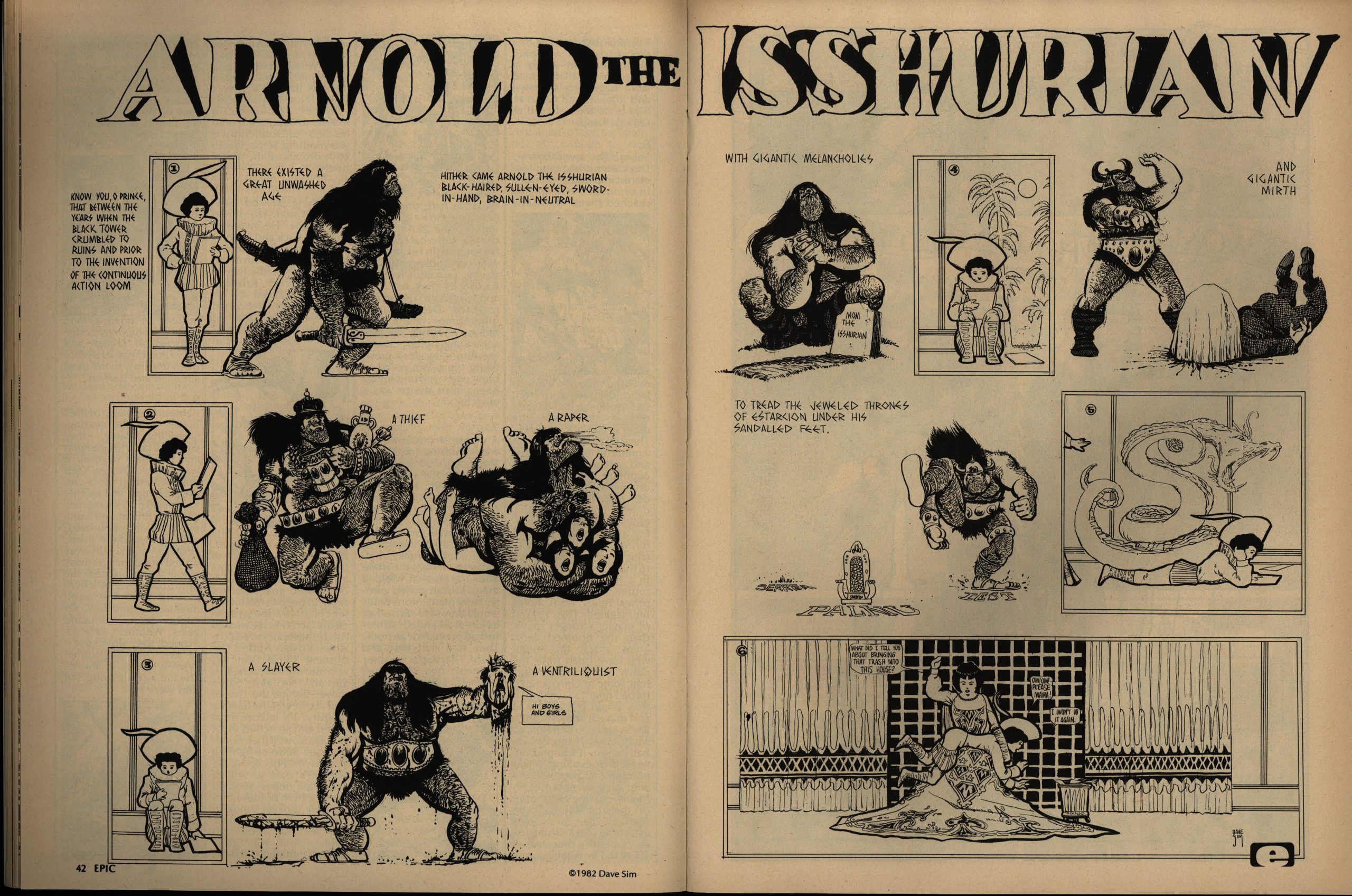 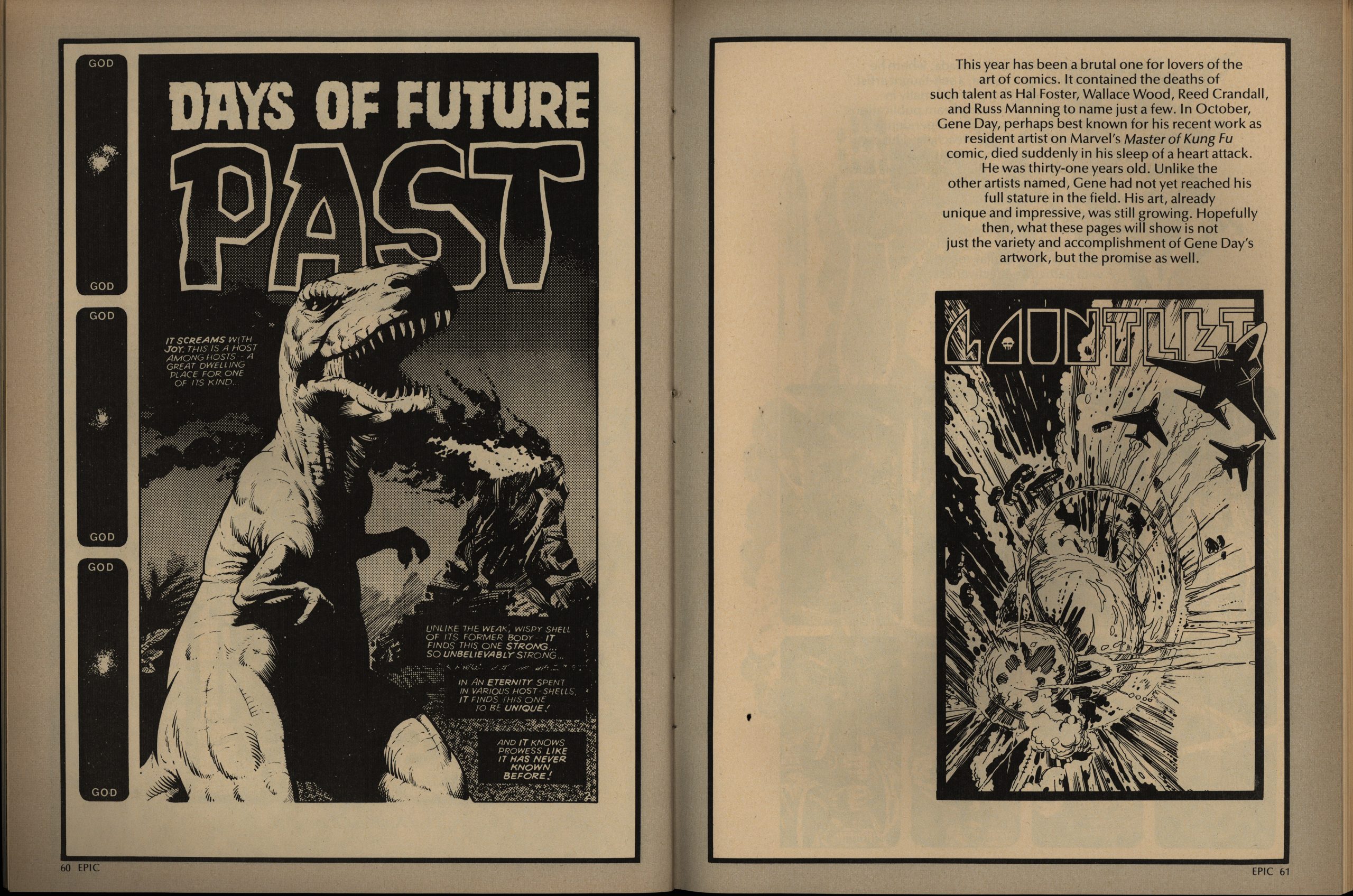 Speaking of Canada, Gene Day had recently died, so we get a short retrospective on his career and some choice artwork. 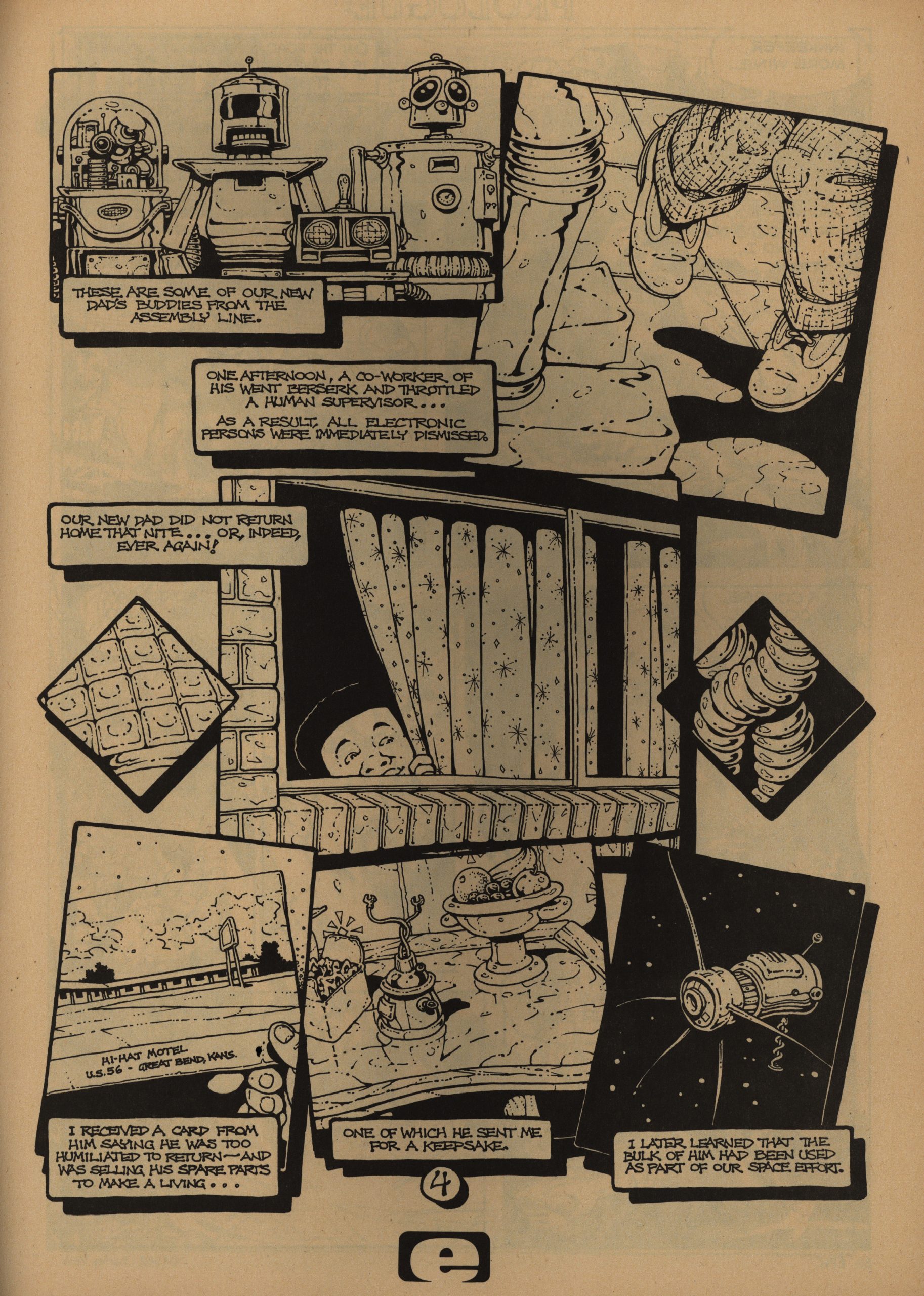 *gasp* Rick Geary! There can never be a sufficient amount of Rick Geary in any anthology! And he’s got a four-pager here, which is 4x as much as he usually gets in anthologies. 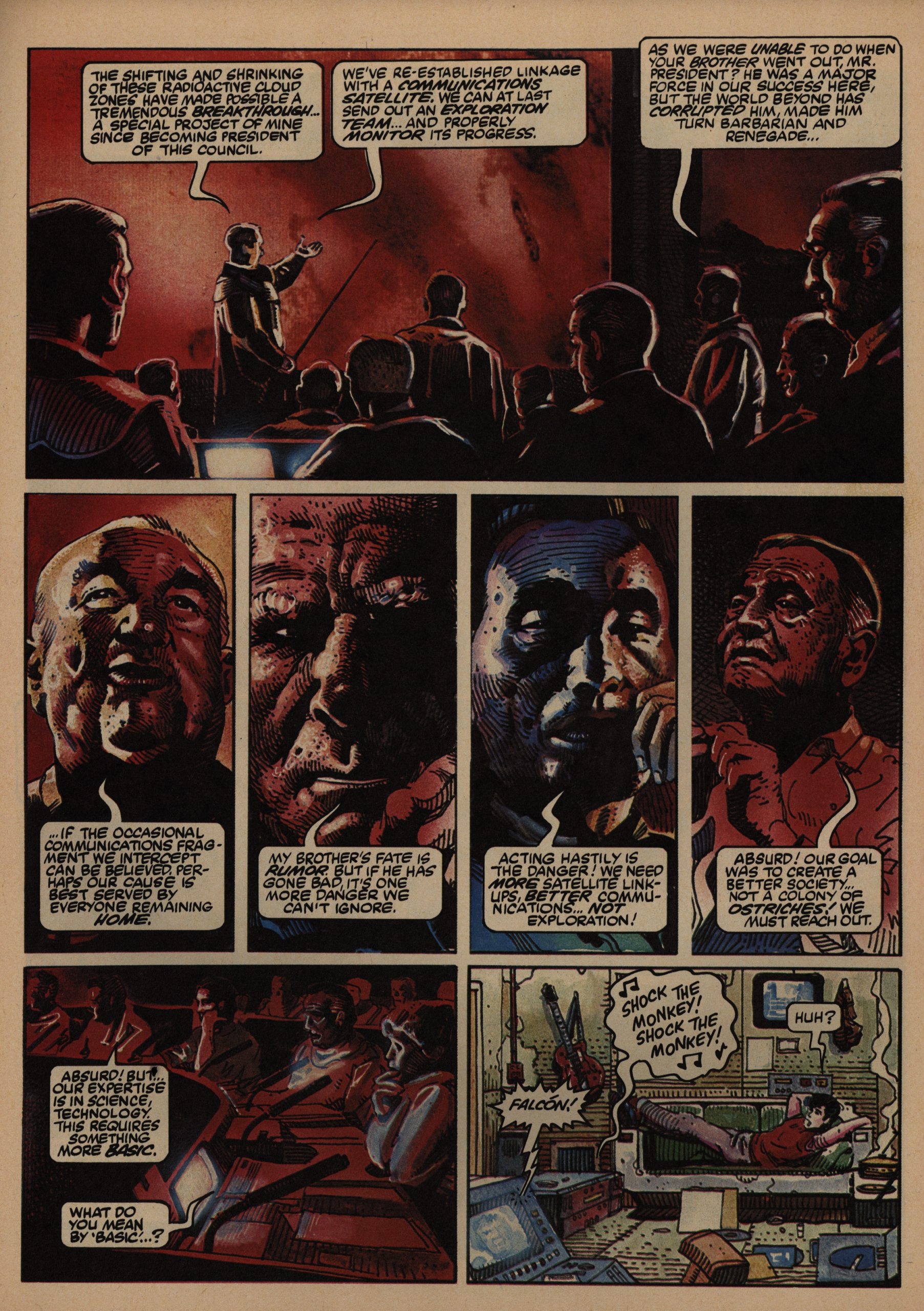 The new long serial starts, and Goodwin talks a bit about its long gestation. Or, really: He’d bought it a couple of years before, but hadn’t the room for another long serial in EI. And this is done “Marvel Style”: Goodwin himself is the “scripter”, which means that Pepe Moreno wrote and drew the thing, and then Goodwin puts the words onto the pages as they arrive. 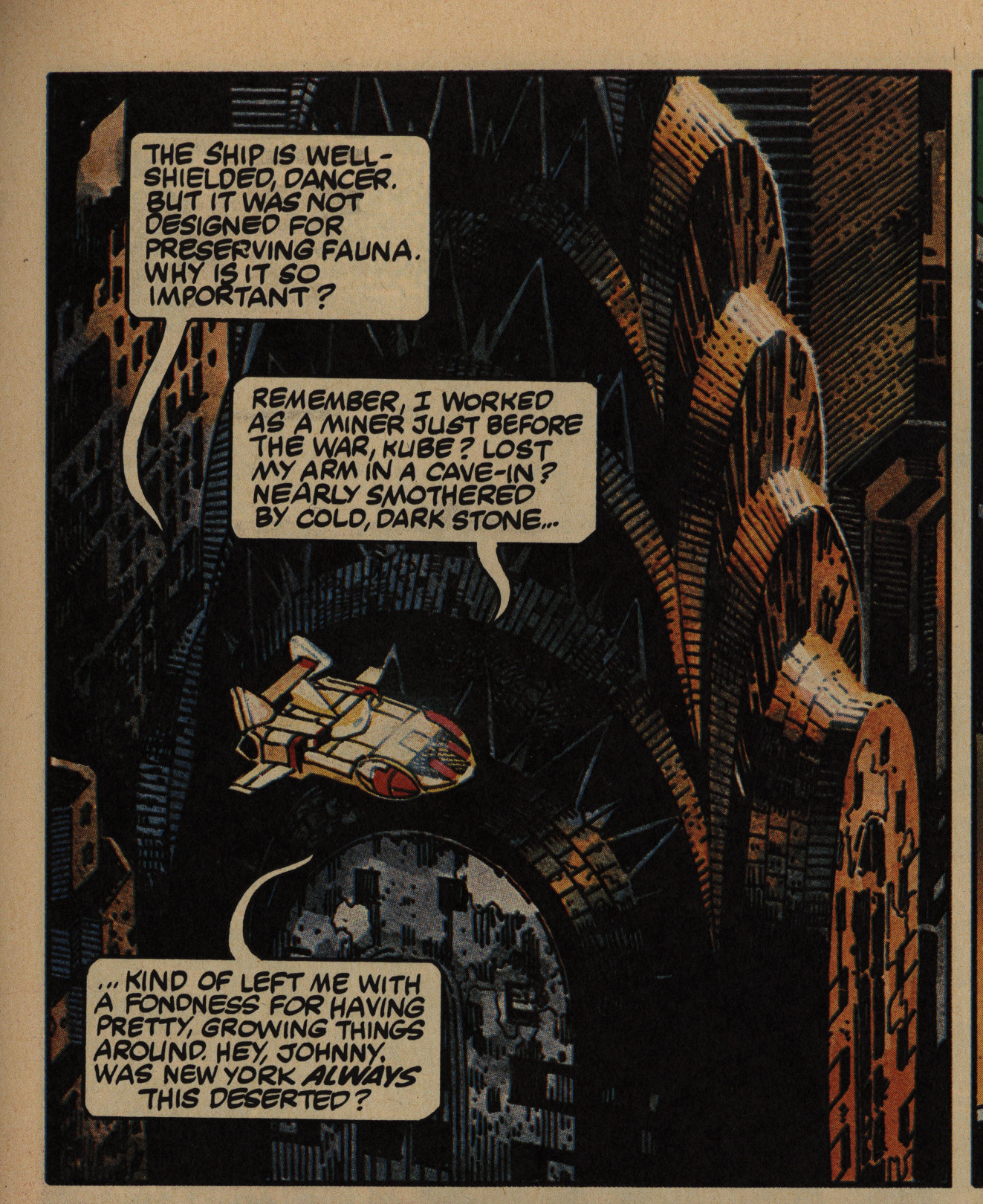 They’re talking about plants, which are flora, I believe, but I just wanted to mention that the “Marvel style” is perhaps not the best choice here. I mean, do we need to get this backstory here? What I’m saying is that it’s a bit overwritten, but it’s pretty entertaining anyway. 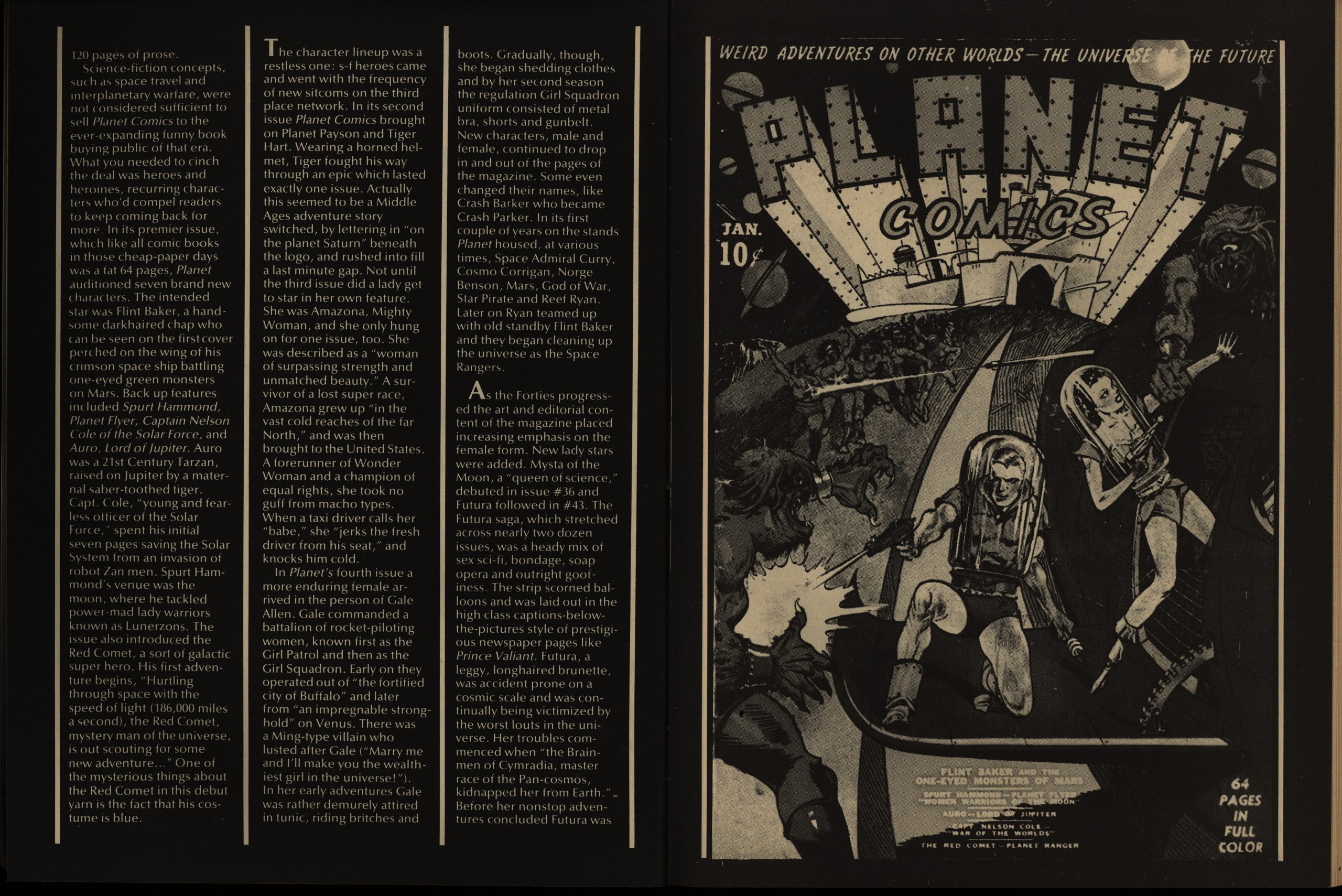 And at random, we get the history of Planet Comics. Well. Perhaps that makes more sense than some of these text pieces, as Planet Comics was more sci-fi than most. 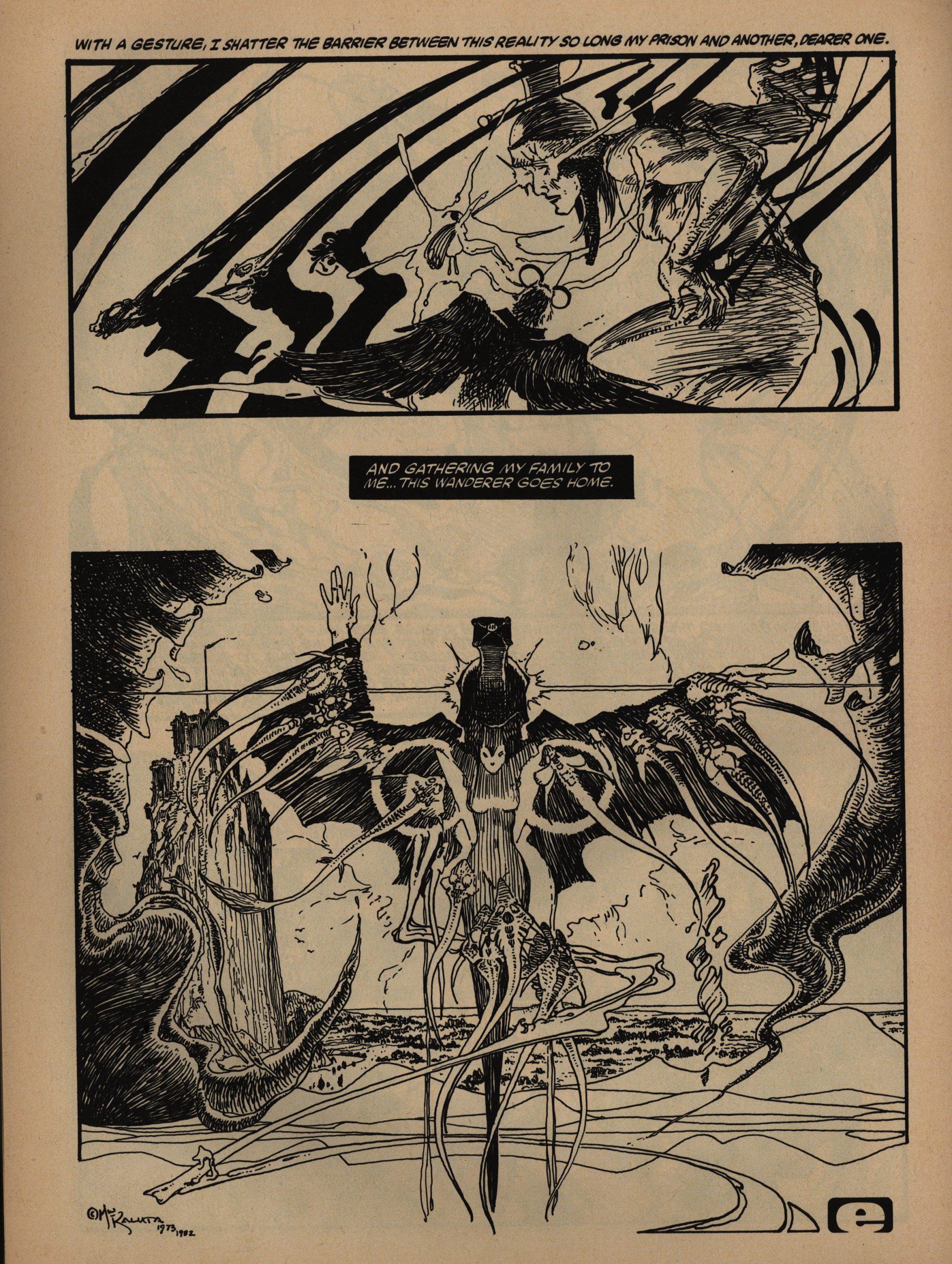 Michael Kaluta spruces up an old story he’d done in 1973, and retrofits a new storyline, and then Goodwin writes the text. It makes zero sense, but it looks nice, eh? 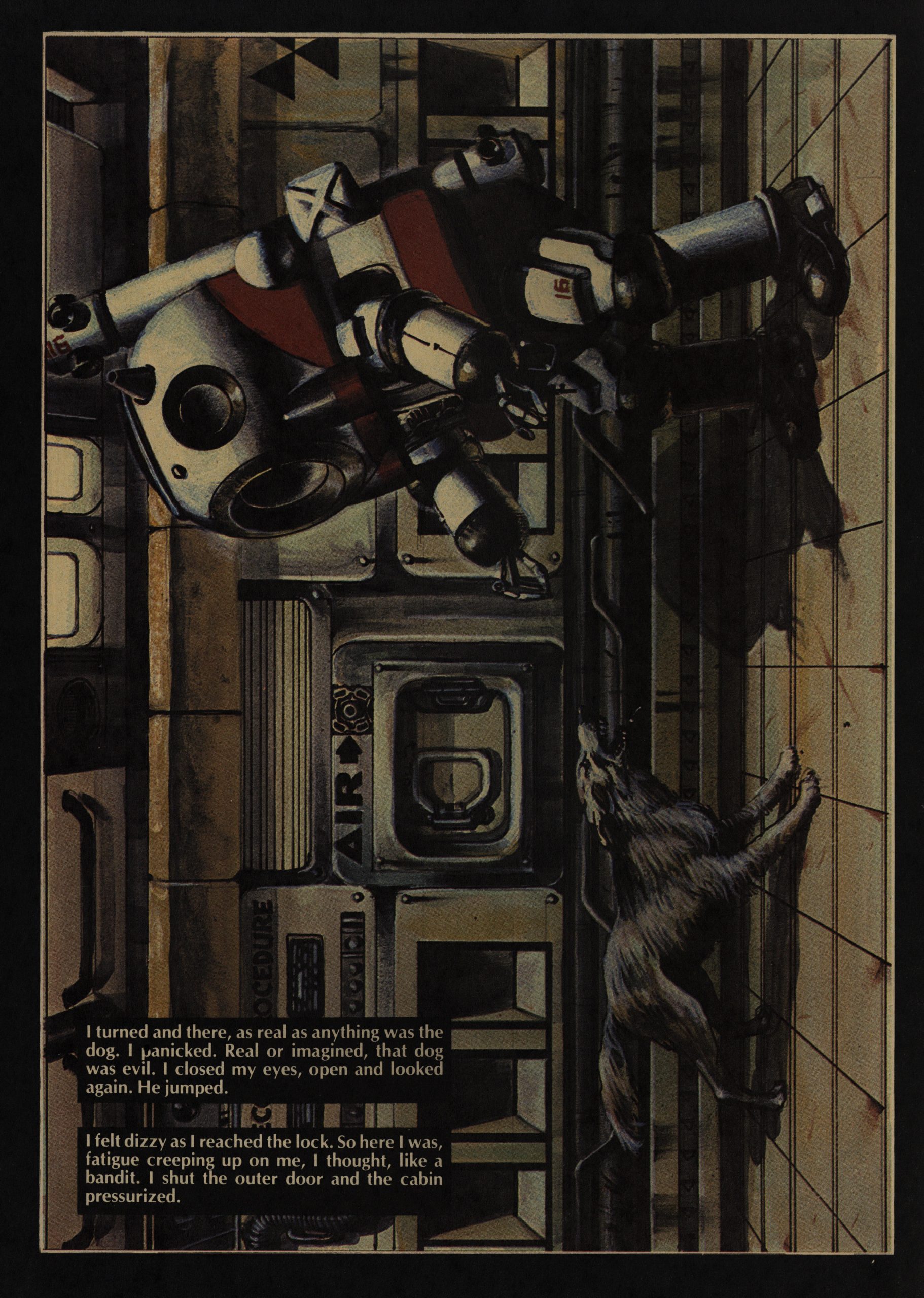 Michael Saenz does a sci-fi story that I thought, for once, wasn’t going to have a twist ending, but then the twist was that there’s a twist ending. But it was properly moody before we got to that point. 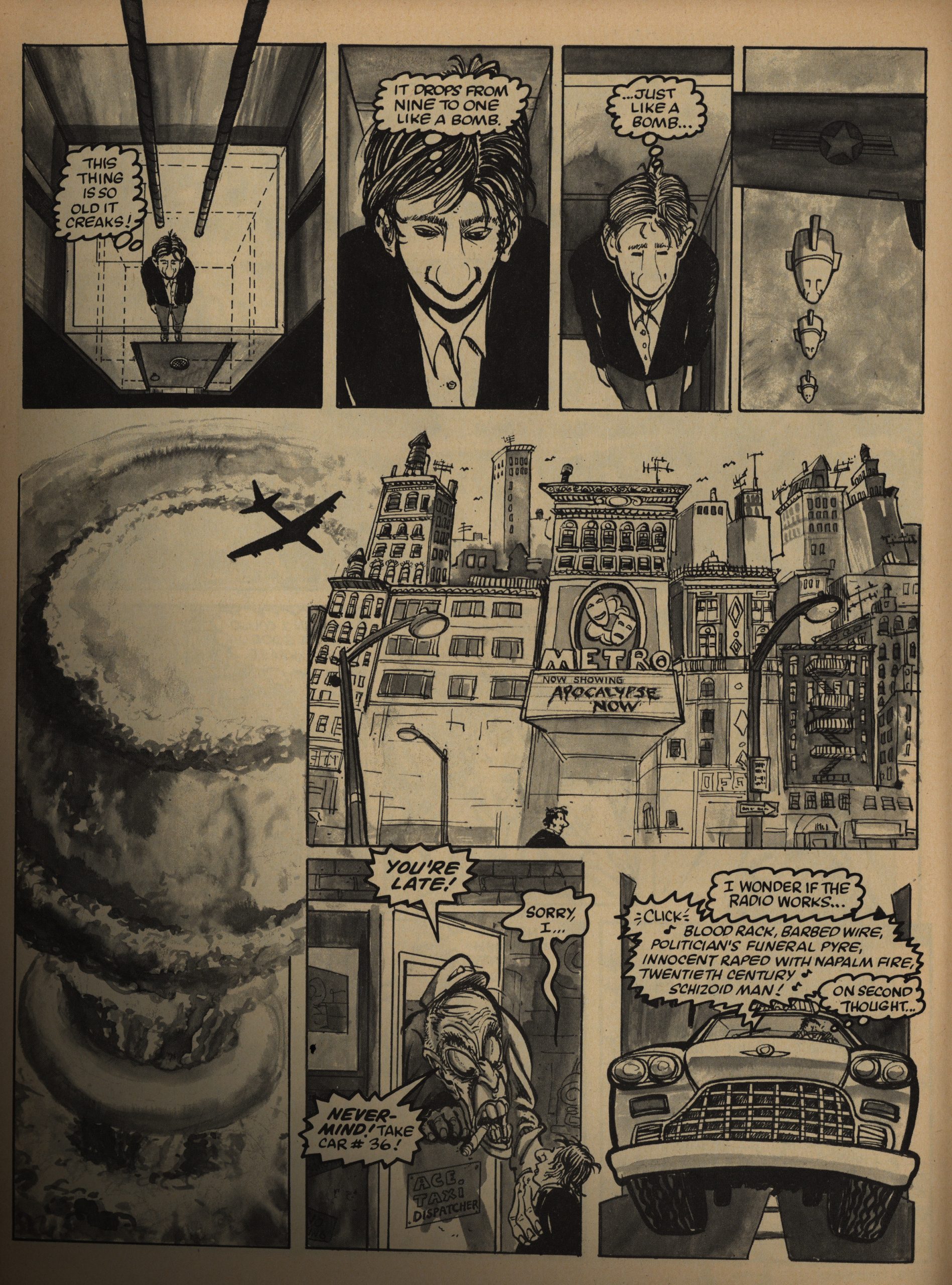 What the… Peter Kuper!?

Doing an anthology like this isn’t easy: You have to have some consistency; something to tie things together (thematically or moodwise), and EI certainly succeeds in that: They have a stable of artists that return issue after issue. I’d guesstimate that, like, two thirds of the pages in any issue are by people who have previously appeared in the magazine.

But you also have to surprise and delight readers by bringing in fresh talent and different moods, and Goodwin is good at that, too.

I mean, Peter Kuper. It seems so incongruous in a magazine like this, but it makes total sense for this reader, at least. 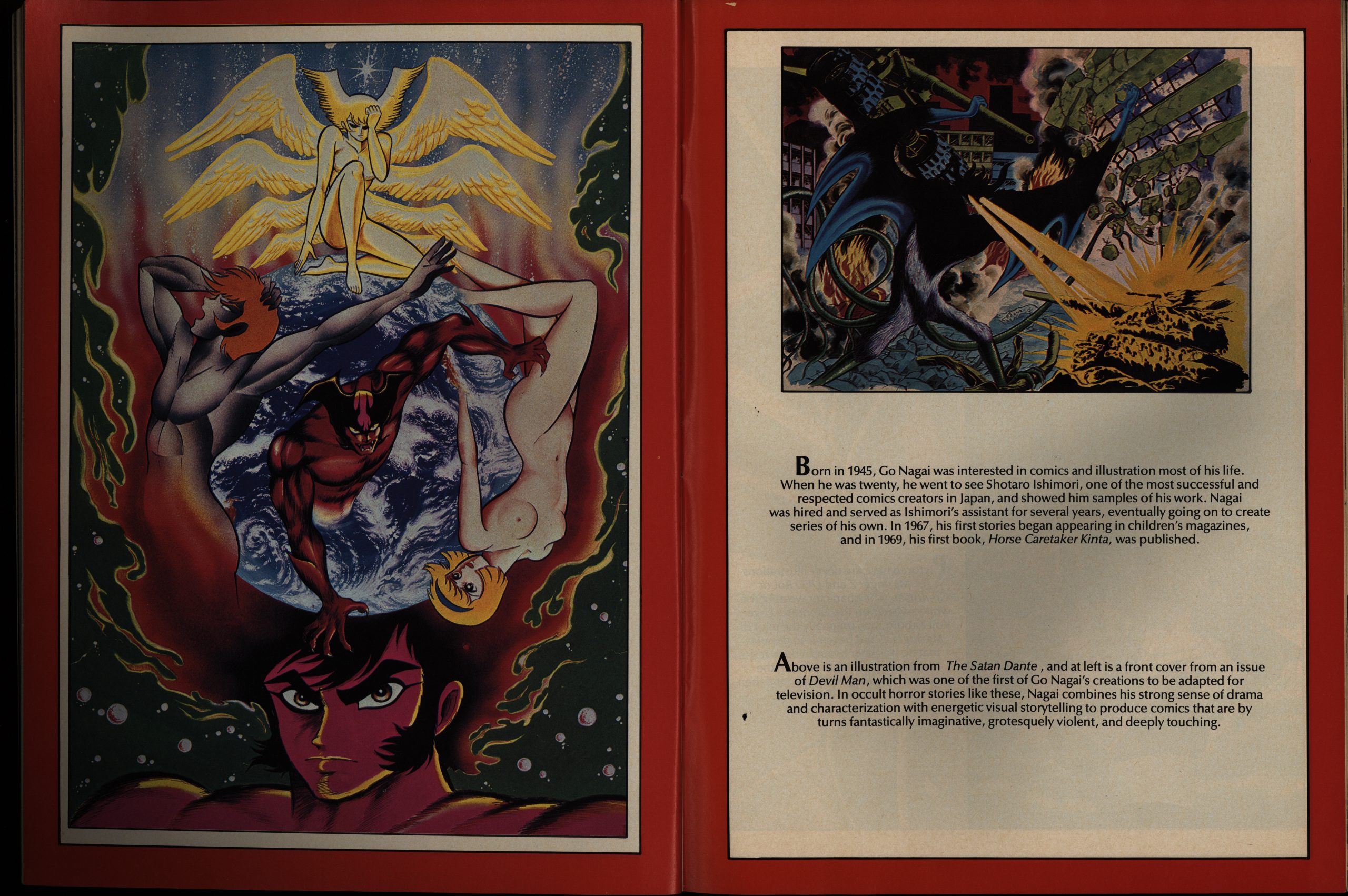 Goodwin continues doing the occasional overview of Japanese comic book artists. They’re not very… in depth… but they must have been even more interesting back then than they are now. 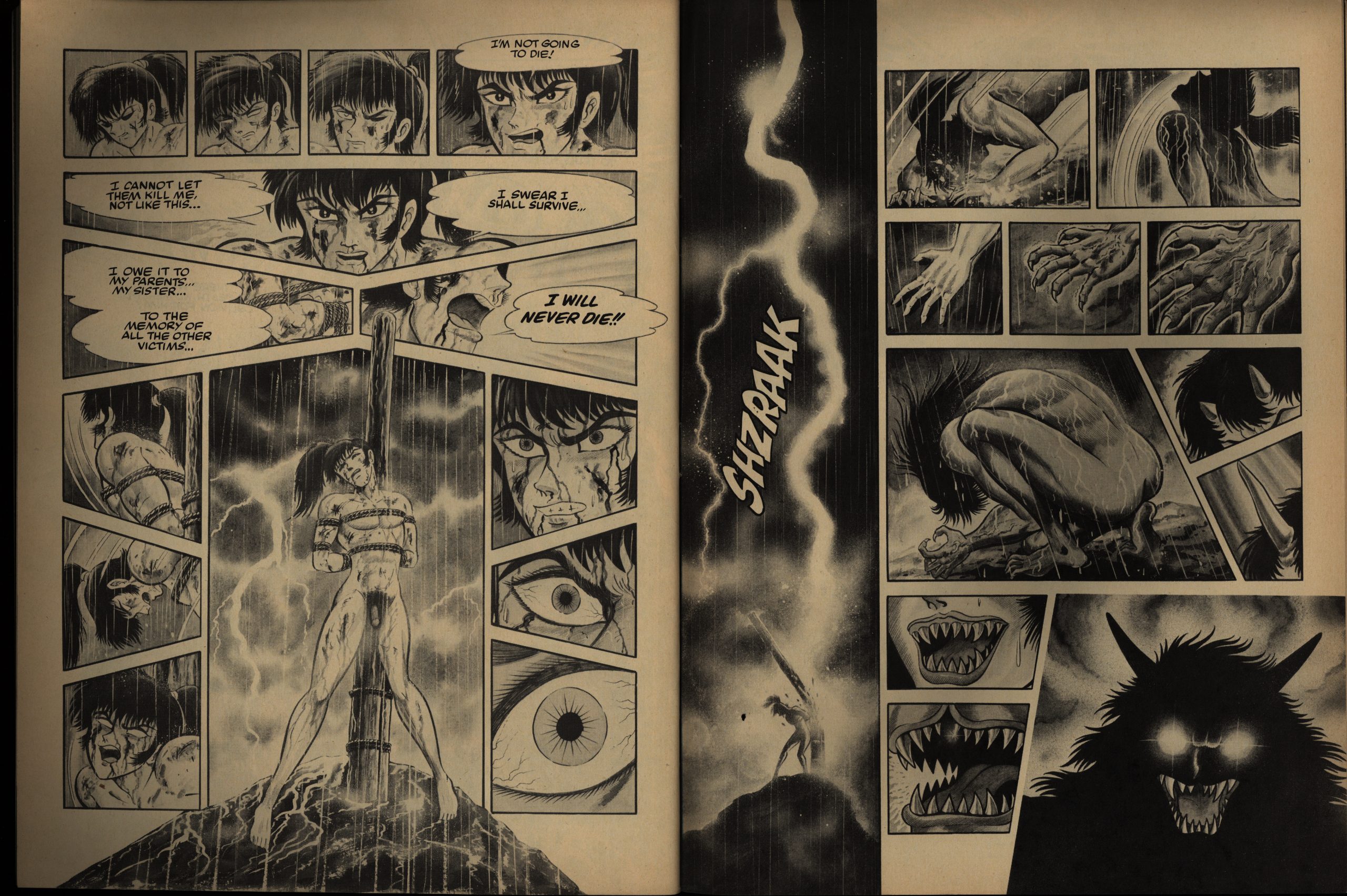 And we even get a story by Go Nagai to go with the overview, and I excerpt these two pages in particular because of this letter to the editor: 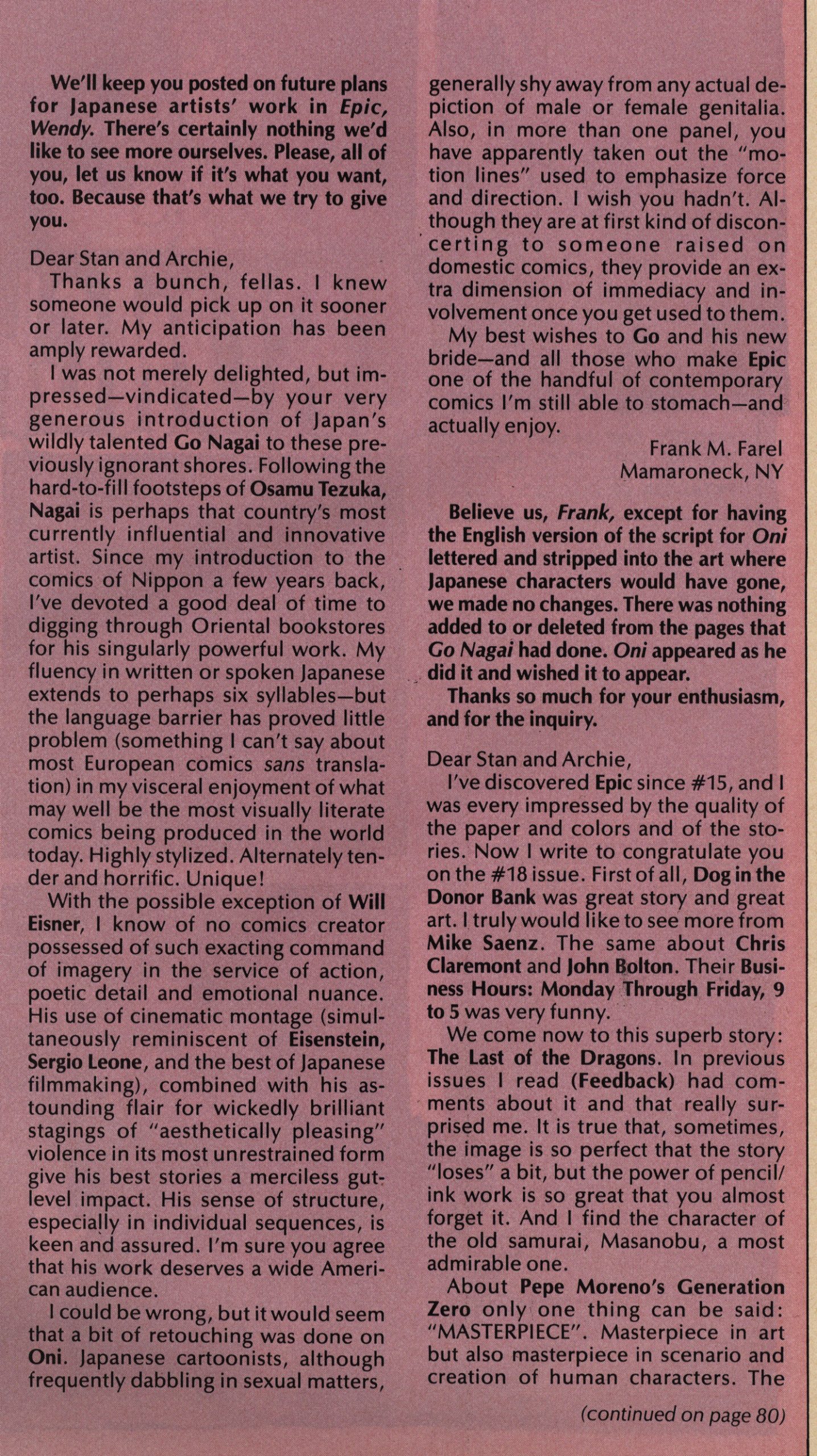 He seems to think that the penis was added by Marvel? That’s special. 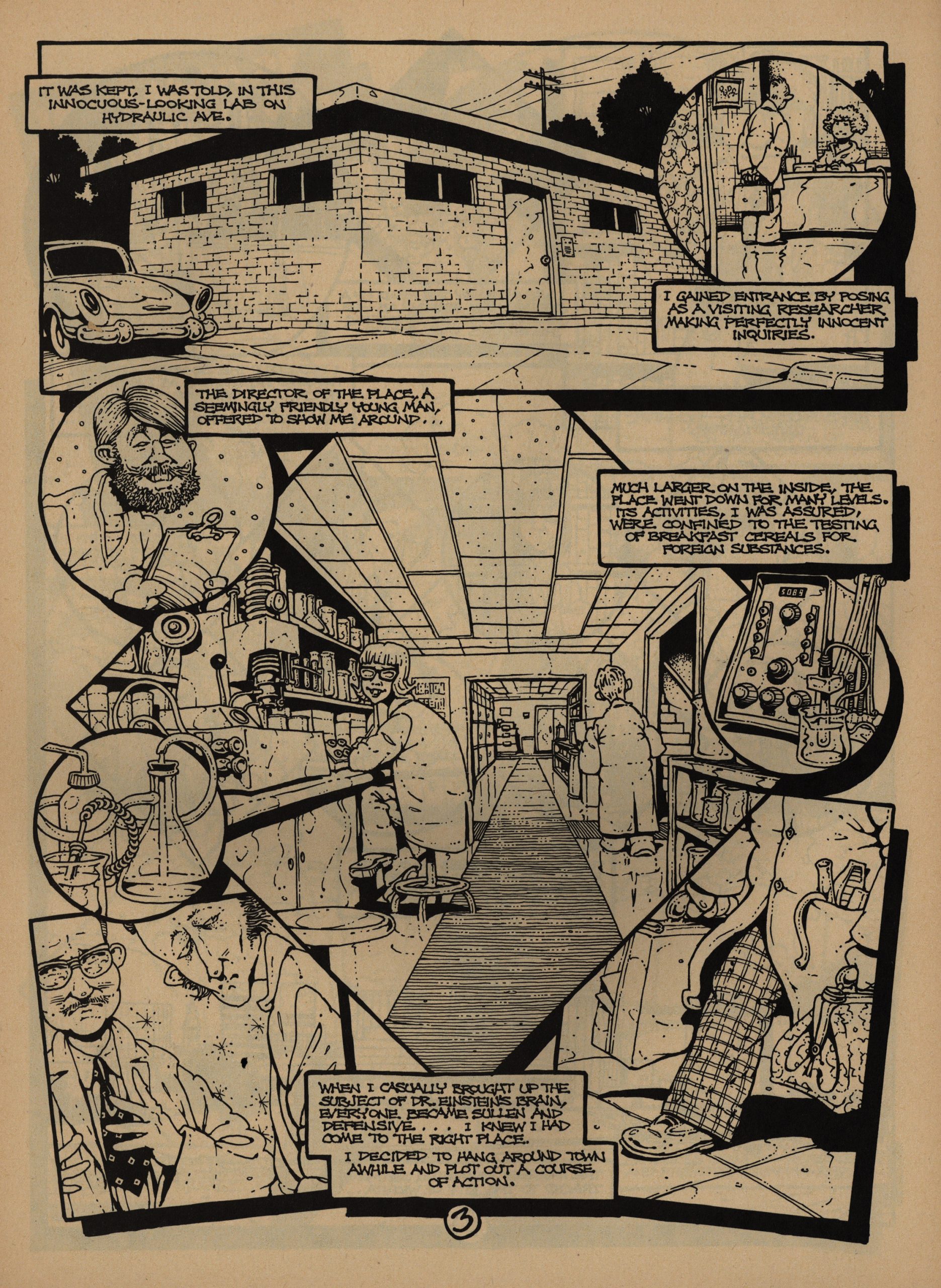 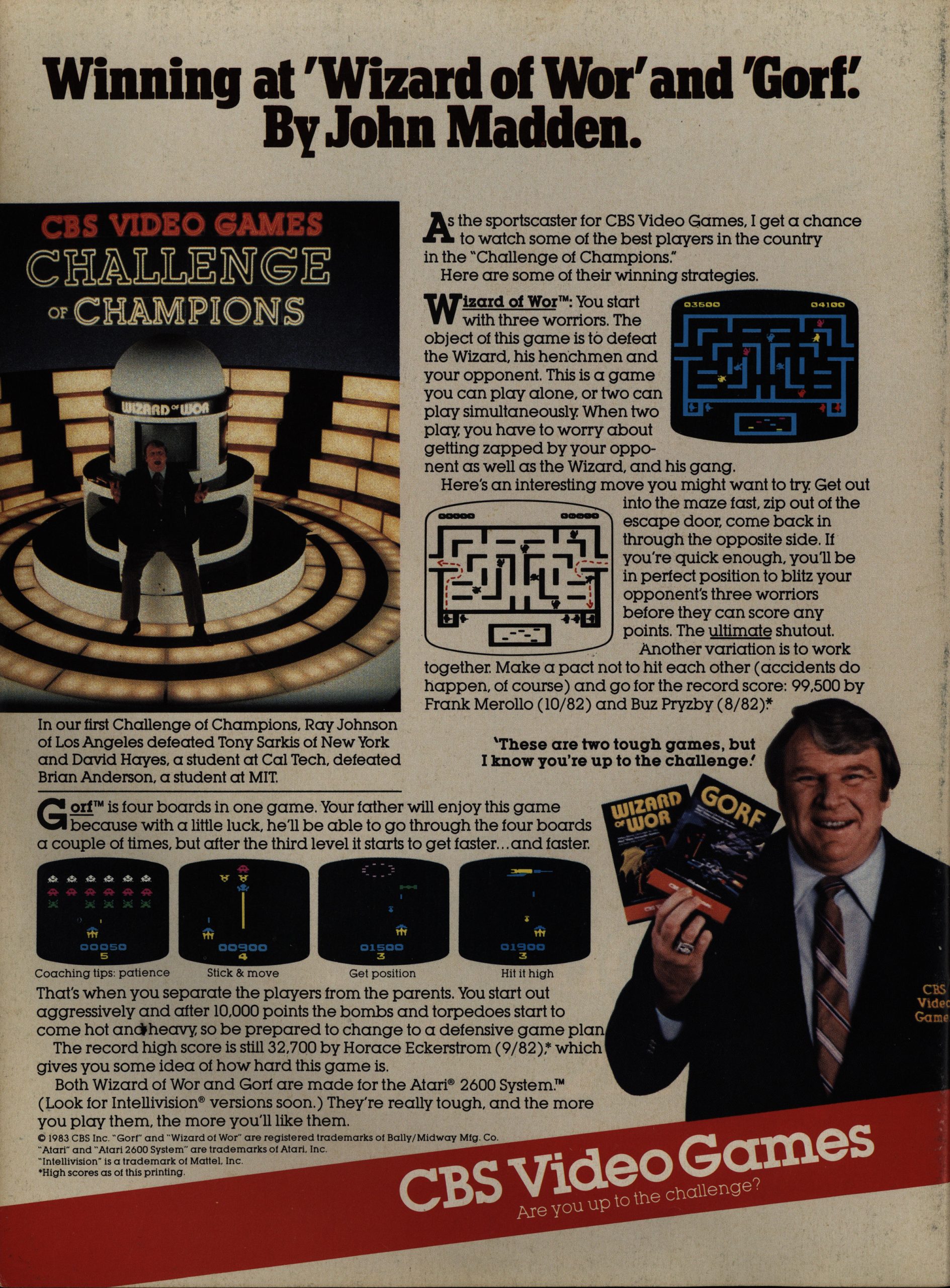 Now the ads are getting really good. John Madden will show you how to win at Gorf! Pepe Moreno has one really annoying tic: Usually the reading order is horizontal, so up there it’s first the two top panels, and then the one below the first panel, and the placement of the speech balloons emphasise that reading order. But most of the time, there’s no such guidance, and sometimes he’ll do the reading order the opposite way. With no indication that he’s doing so. Vaughn Bodé’s son finished up a Cheech Wizard strip that had been written in the early 70s. It was meant for syndication, but Bodé apparently decided that if it couldn’t be raunchy, it’d just be boring. And I say this as somebody who has never liked Cheech Wizard: This stuff is just lame. 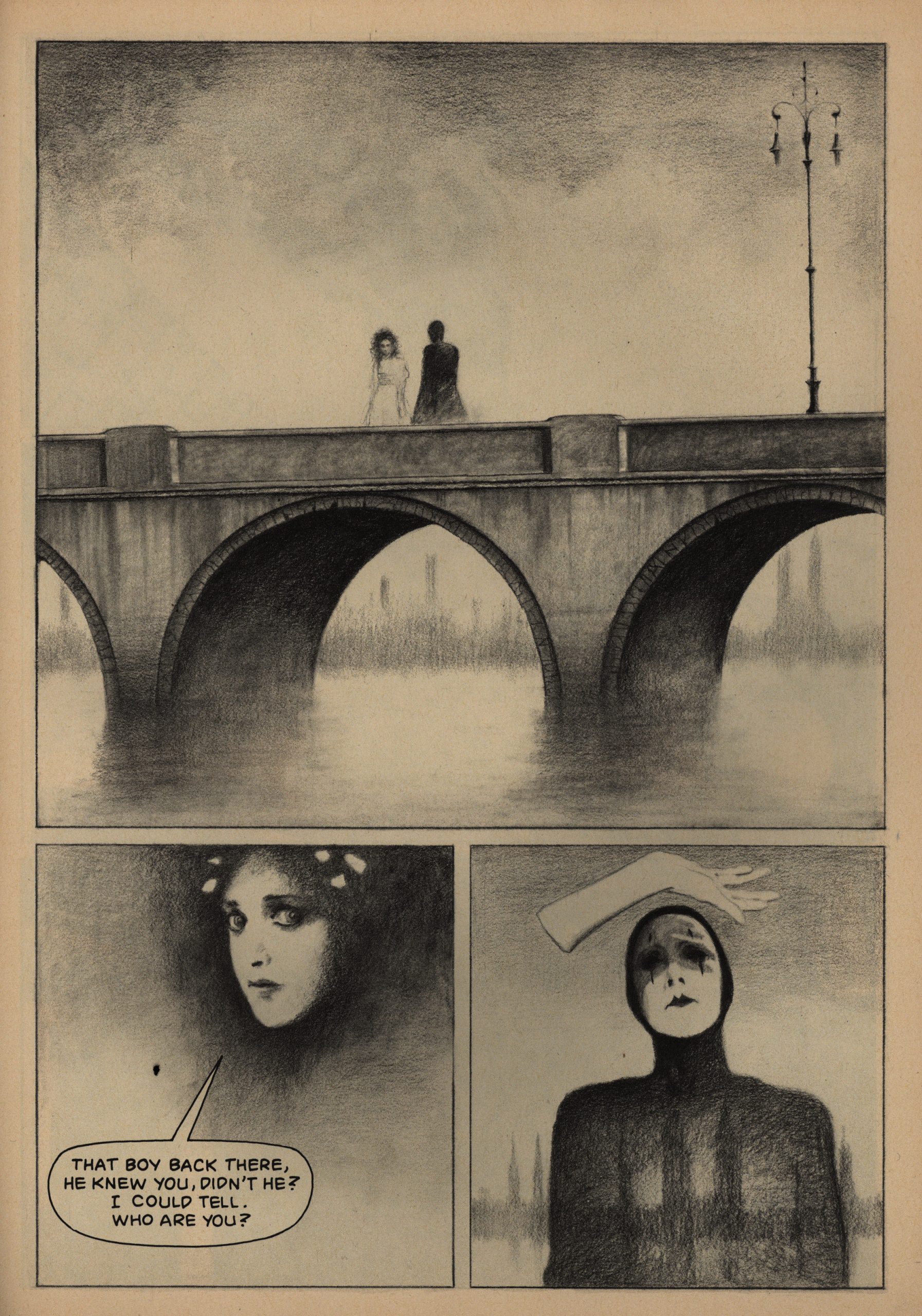 Another big serial starts: A Jon Jay Muth thing, so it’s all poetical and mysterious. But it reads well in the context of the magazine. Oh, right. The Sacred & The Profane. I’ve read that several times in multiple variants, and it doesn’t really get better with repeated readings, so I skipped it that time. But, man, what an introduction. Pepe Moreno is a good artist, but he does not excel at slapstick. I think that’s supposed to be a spit take? Robert Gould had illustrated an Elric novel, so EI got him to write and draw an (original?) storylet, too? Vignette? Moreno starts dropping in pictures into his artwork. Kinda works, doesn’t it? James Fox and B K Taylor do a pretty original take on #metoo. I love the sheer loathing on display on these pages. New Kaluta! The story makes absolutely no sense whatsoever, but I’ve never seen Kaluta do anything quite in this style before, and it’s magnificent.

A reader lets us know that he’s not a prude, but he’s got some stern words to say about the Strnad/Corben excerpt published some issues before. (See previous blog post for the page he’s talking about.) Be a sleuth and determine from the choice of words what the real issue was. I mean, since he’s not a prude. Speaking of making no sense… The Muth serial ends, and the artwork remains very attractive. Jo Duffy writes a paragraph about Love and Rockets, noting that the editorial (by Gary Groth and or Kim Thompson; I don’t recall) is pretty bad. It is. It makes you wonder how much animus was directed towards the Hernandezes in the early years just because of those two editorials.

And that’s 1983. OK, I mean, typing this I see that I seem perhaps kinda negative towards Epic Illustrated, but I’m not. I’m enjoying reading these issues. Goodwin has managed to create a format with great leeway while keeping things cohesive. Even if there’s a couple of duds here and there, when you have a 100 page magazine, the misses don’t matter that much.