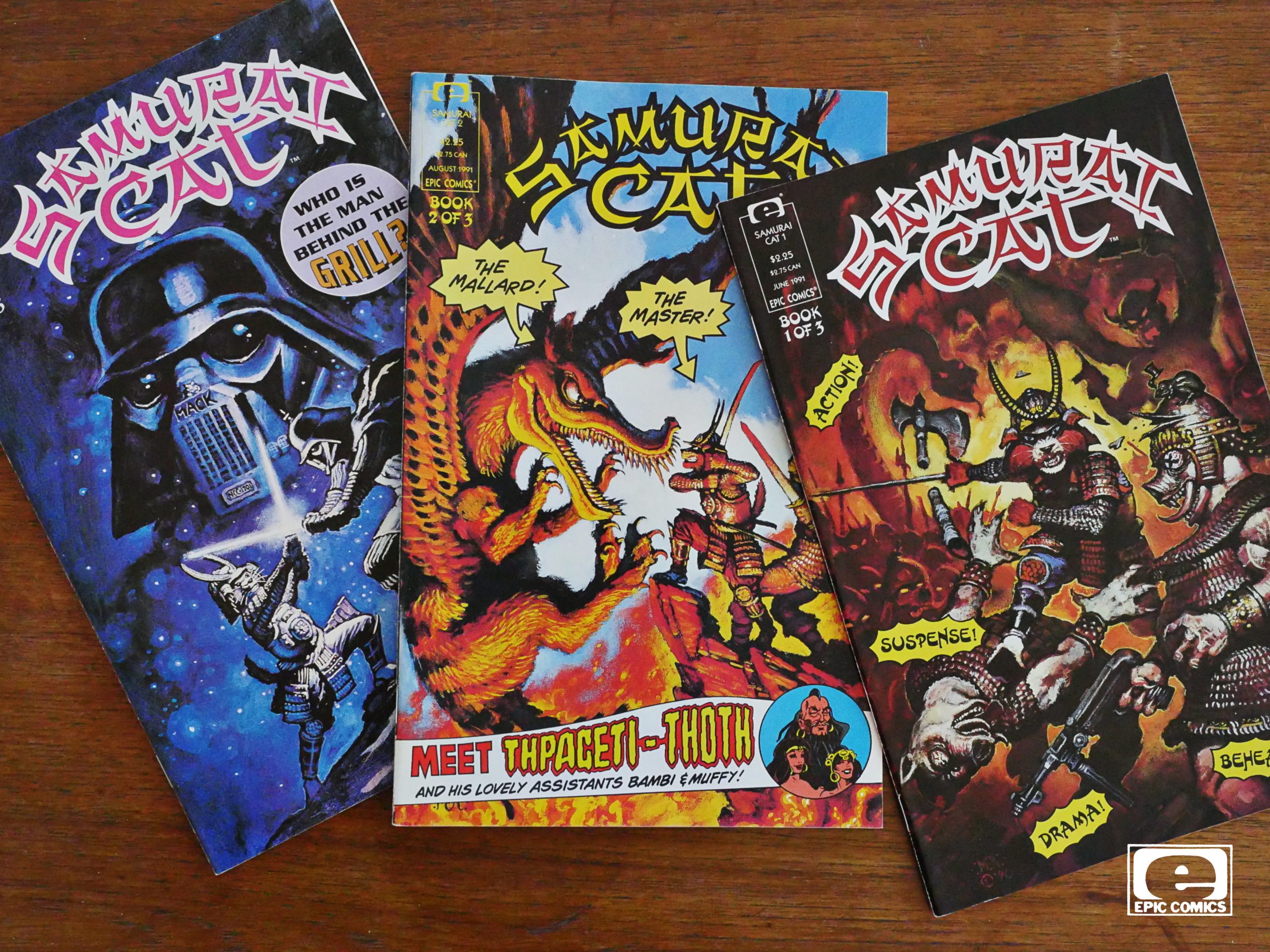 We’re now venturing into the part of Epic’s publishing history that I know nothing about. Looking at the titles to come, I think there’s… one? of them I’ve read before. The rest are mostly unknown to me. I mean… Car Warriors? The Olympians? Mutatis? Samurai Cat?

Which is this series: A three issue limited series of 32 page floppies.

As I assume everybody else went when hearing “Samurai Cat”: Oh, a cat version of Usagi Yojimbo? We certainly start off like that, and a whole lot of infodumping about Japan. 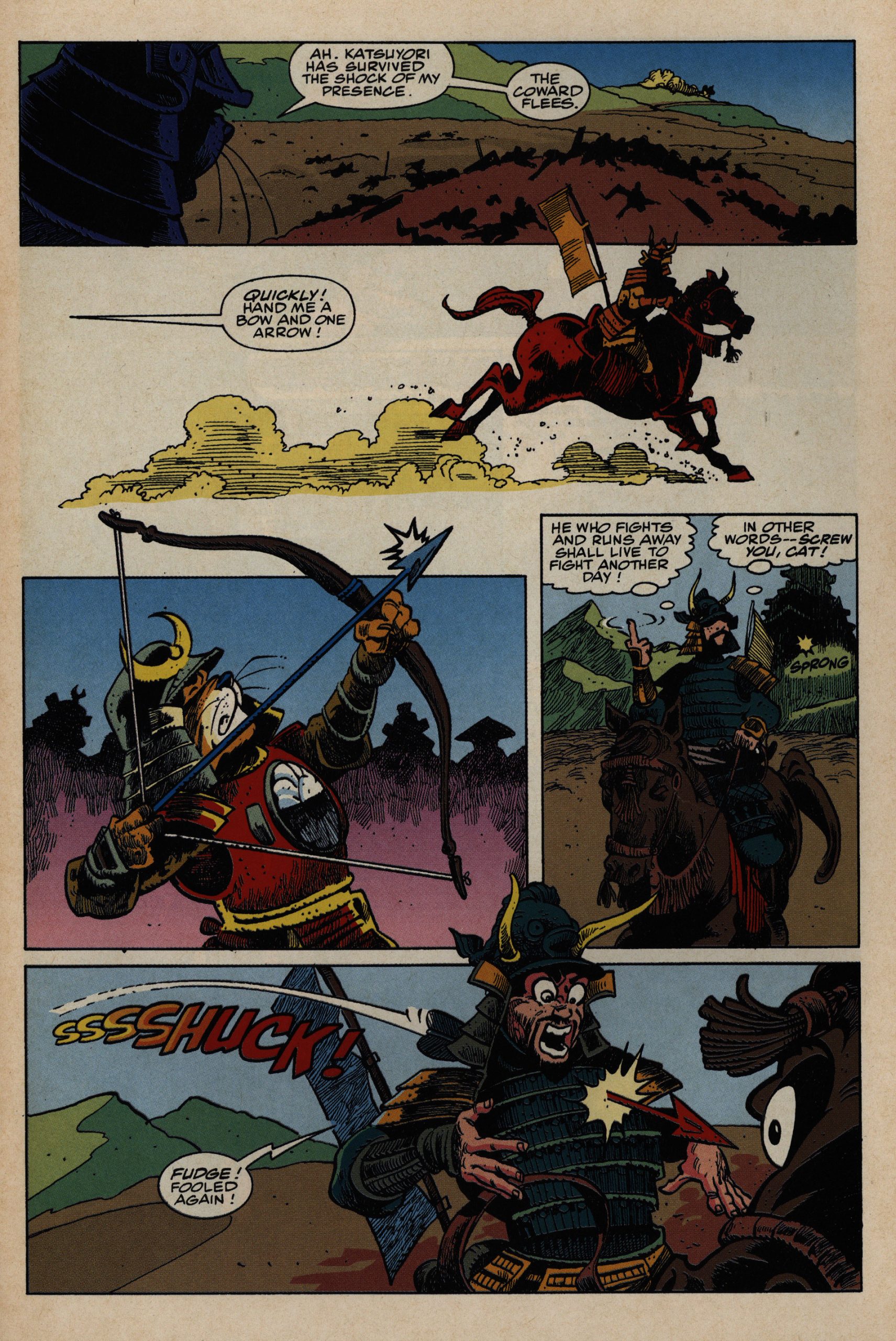 But Usagi Yojimbo is basically a straight-up adventure serial, and this isn’t? I guess?

OK, I guess I need to reset my expectations: This is just meant to be funny. 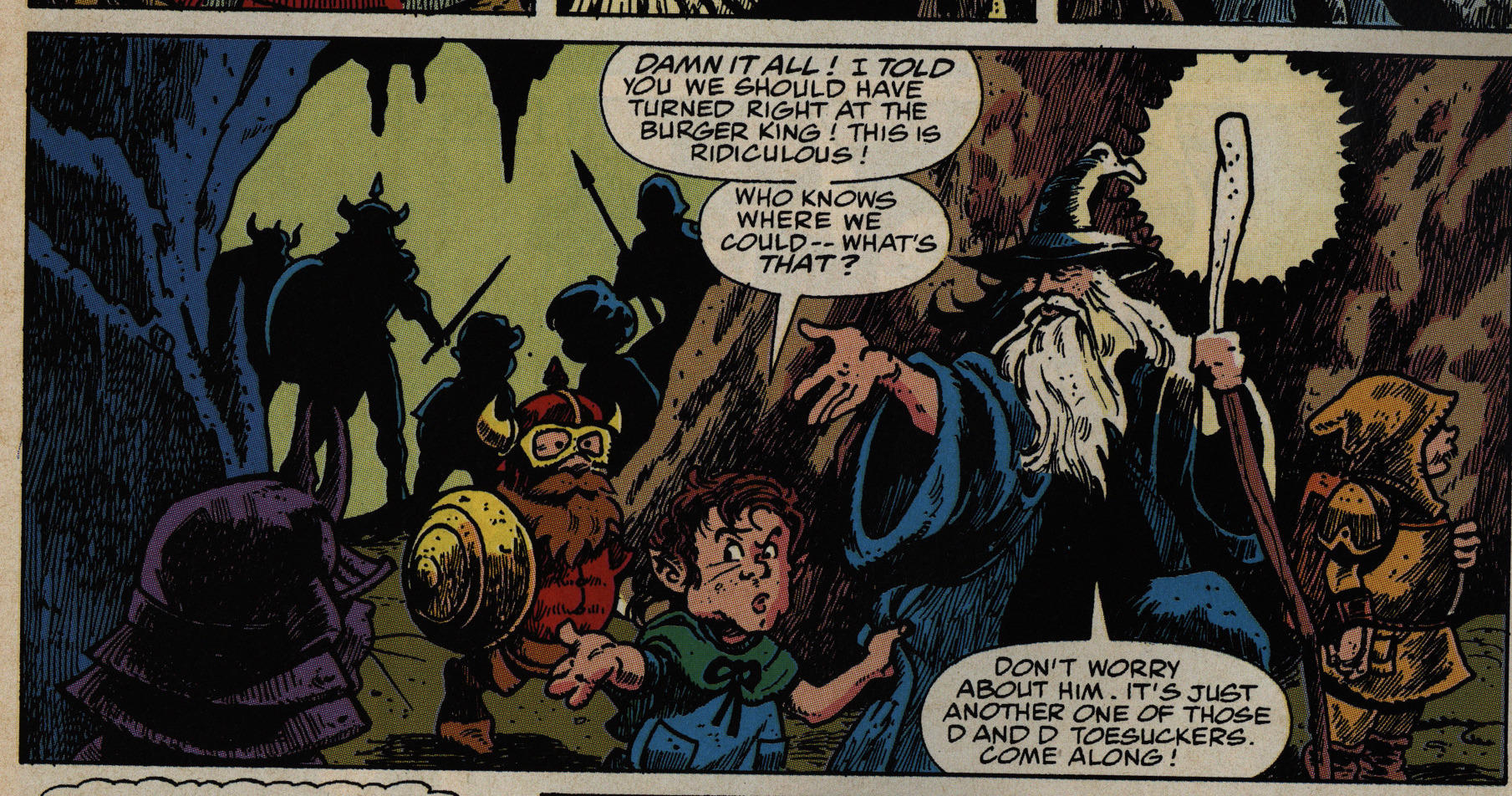 It’s like a very leisurely version of a Mad Magazine movie spoof, I guess.

Oh, well. If only the jokes were better.

And I’m usually a fan of Cirocco’s artwork, but I would even have guessed that this was by him. It looks nothing like his work, and it’s kinda… all over the place. 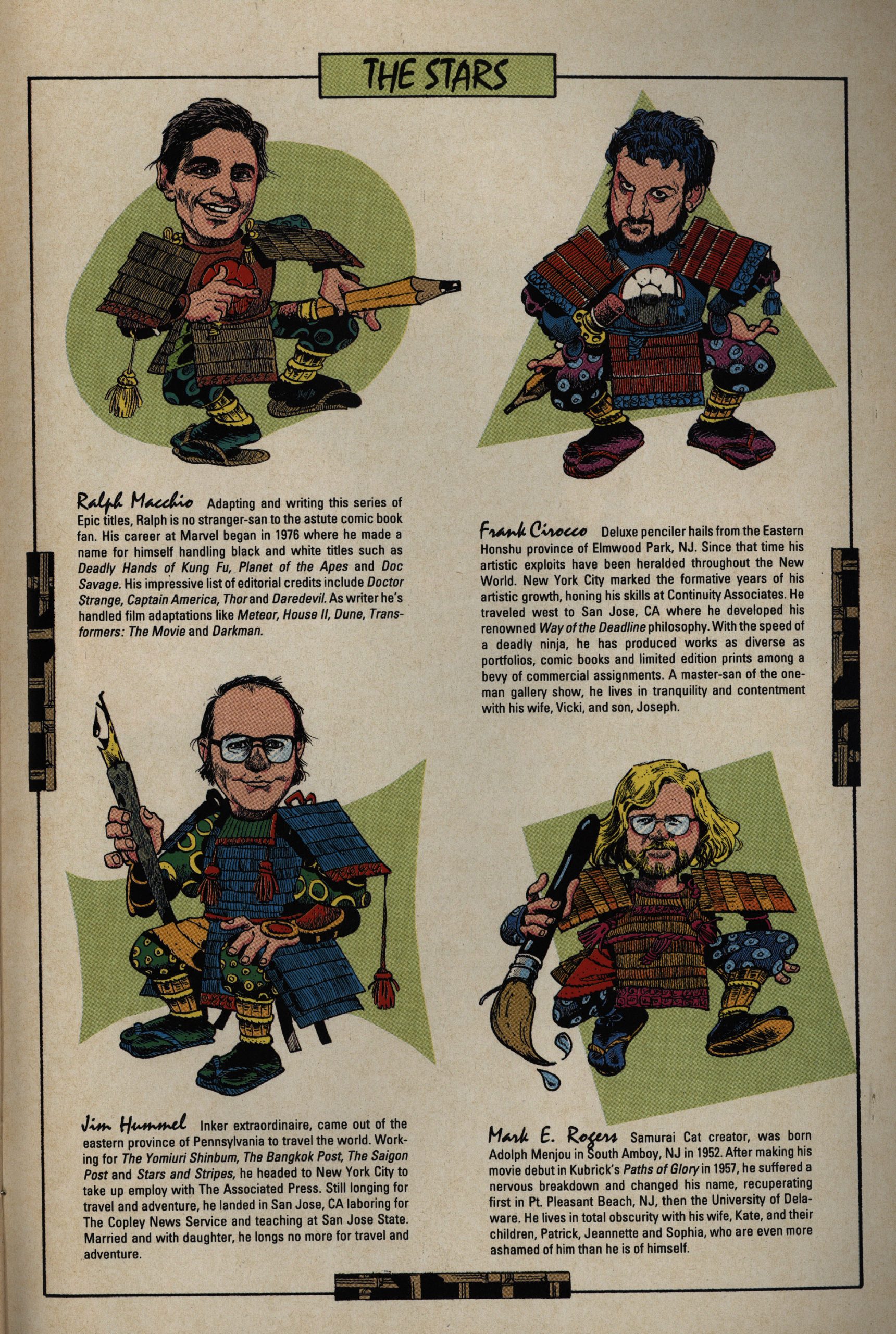 What? “Adapted and writing”… Is this an adaptation of something? “Mark E Rogers, Samurai Cat creator”! Geez! You’d think they could have written that somewhere more prominent than here? Was Samurai Cat a big thing in the late 80s? I’ve never heard of it. What was it? A book series? A cartoon?

Samurai Cat (aka Miaowara Tomokato) is the main character in a series of books by Mark Rogers. To accompany the anachronistic satire, almost every page in each book has a picture painted by Rogers, depicting the events described on that page. Each chapter is a bizarre parody of some historical or pop culture event, but the event is always treated as an entirely serious one. For example, no one finds it at all unusual that Tomokato is an upright, talking, sword-wielding cat.

But heavily illustrated? Hm. I’m unable to find any pictures of the interiors of the book (people on the internet are so useless; there’s nine million pics of the covers, but none of the interiors, which is the interesting bit), but if “almost every page” of the book has a painting, then… is it an illustrated book for children?

There were six of them, anyway. 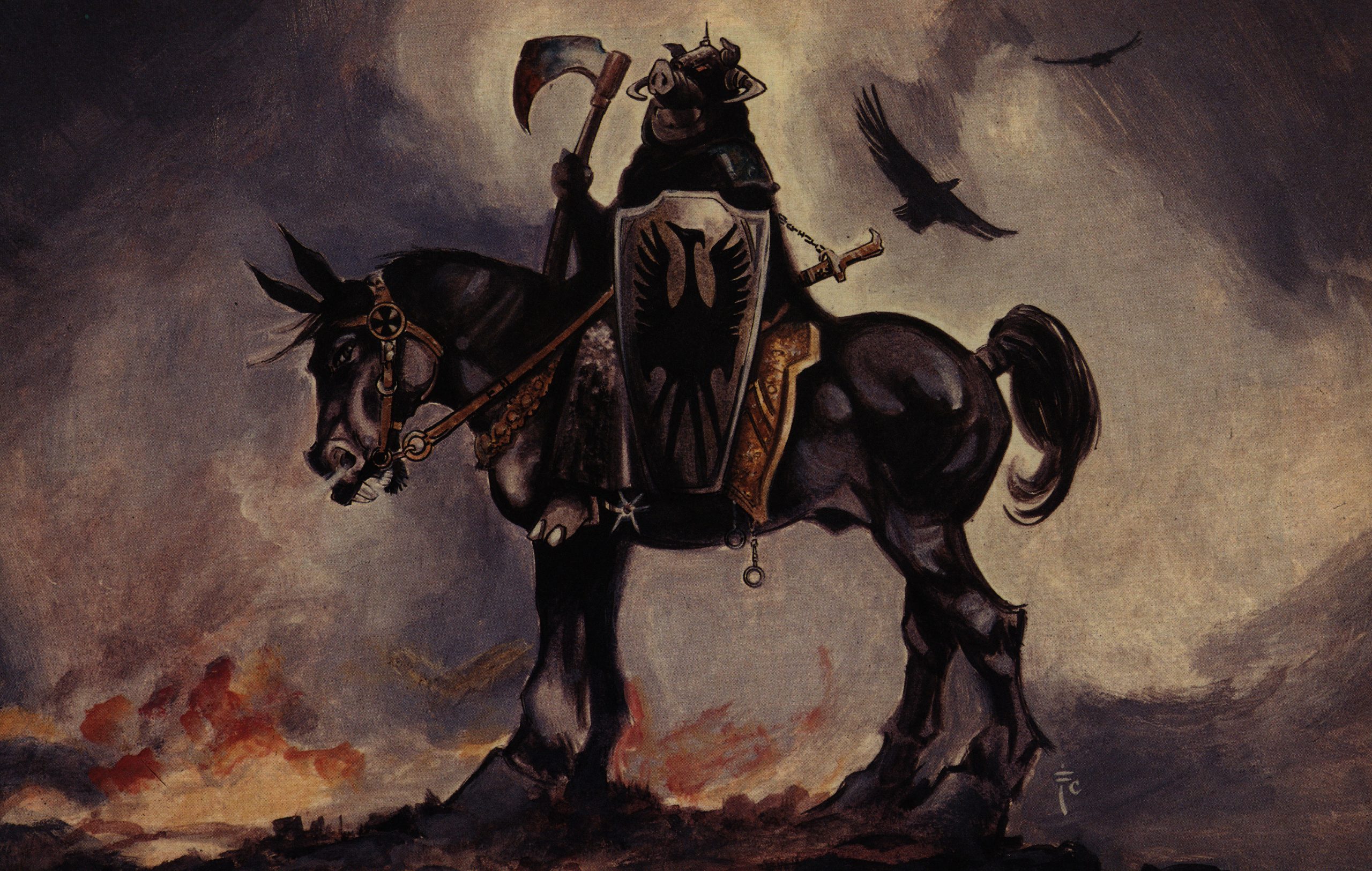 Cirocco does a Death Dealer take on the cat. (The cat’s proportions vary wildly from panel to panel.)

Er… and the copyright on this includes exactly none of the people involved. Perhaps those are the original publishers of the book series? 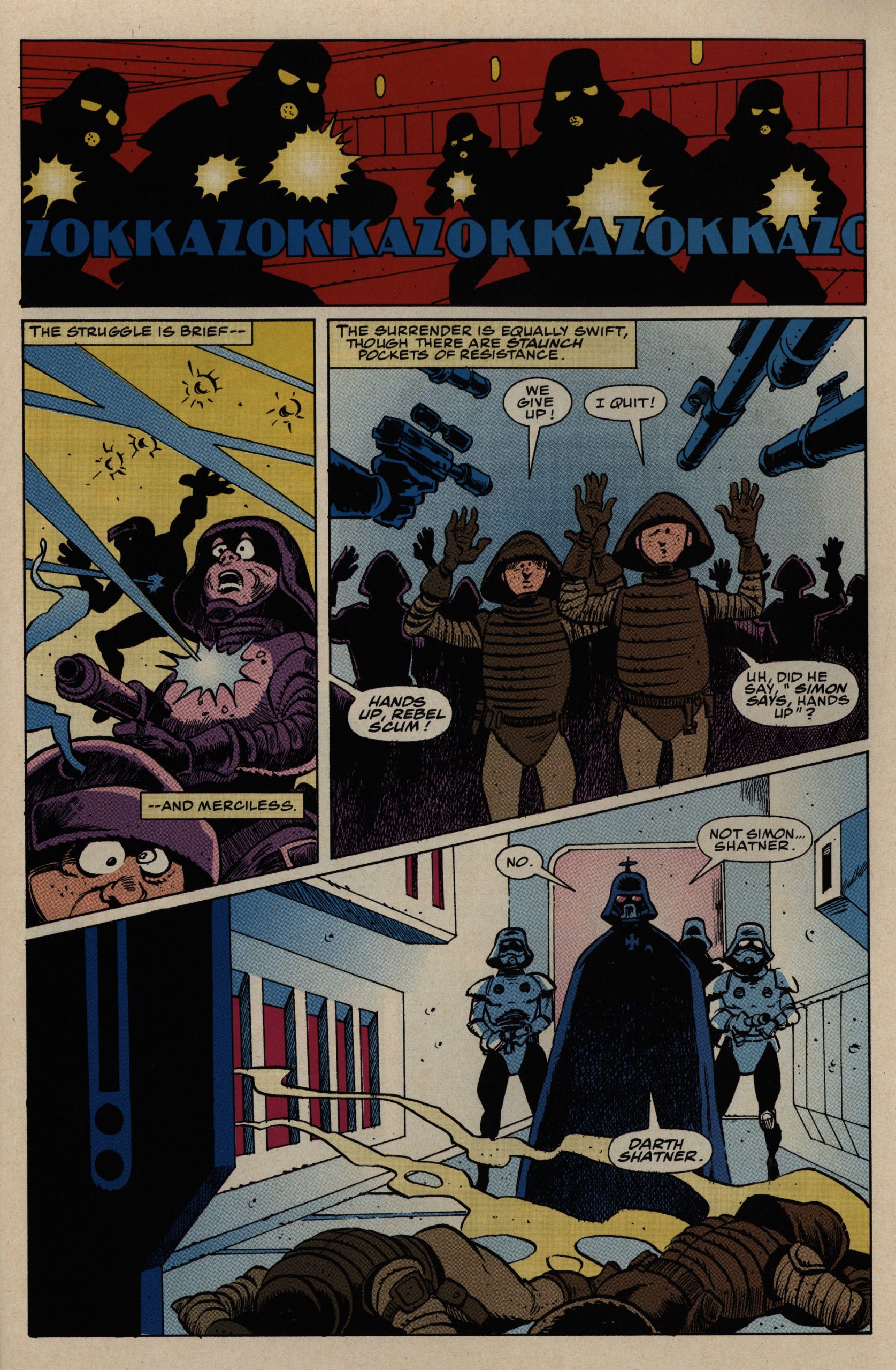 Anyway, with the second issue, we leave Japan completely for a Conan parody, and the third issue is an oh-to-timely Star Wars parody.

The level of wit displayed on the page above is pretty representative. 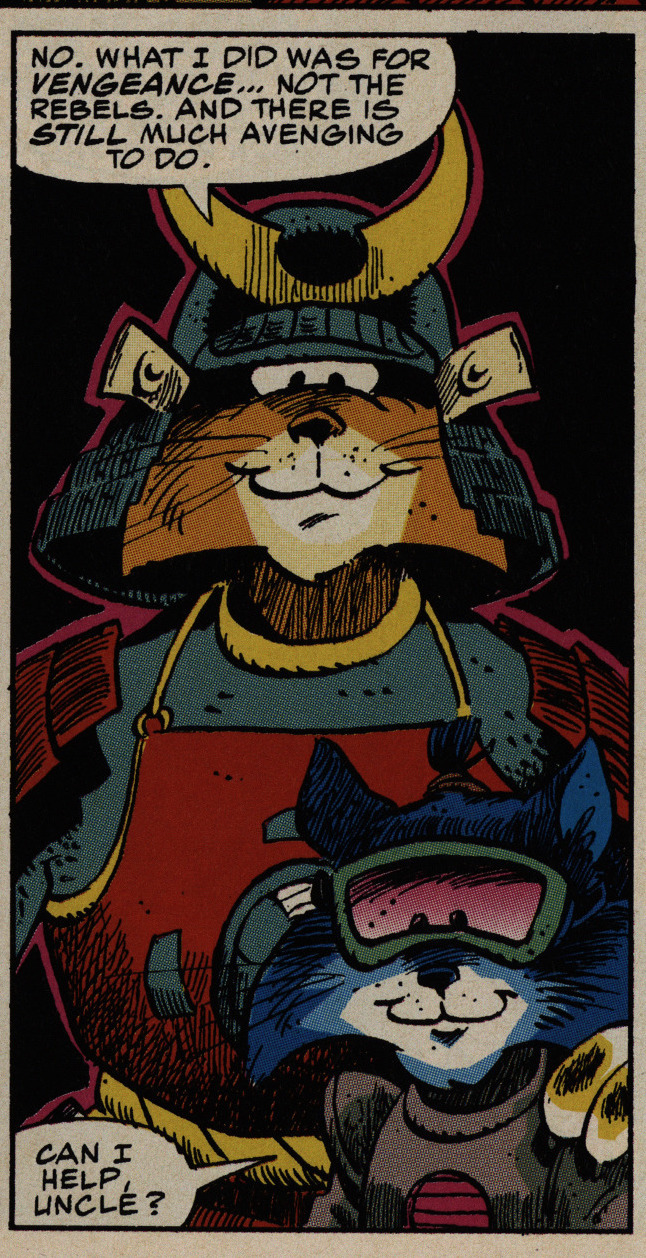 Worst of all, the series just… stops… I mean, the “plot” of the series was just a device to send the cat on various different adventures, but it would have been nice to have some sort of structure beyond “OK, so here’s three parodies”.

I don’t mean to be this down on the project as I’m coming off here: It’s perfectly inoffensive. I’ve read a gazillion comics worse than these three. But it’s just so… weak. It’s fine, it’s fine; if you like Mad Magazine parodies, the series is a bit like that, only with a lot fewer jokes.

The series has never been reprinted, and I’m unable to find even a single review of it.