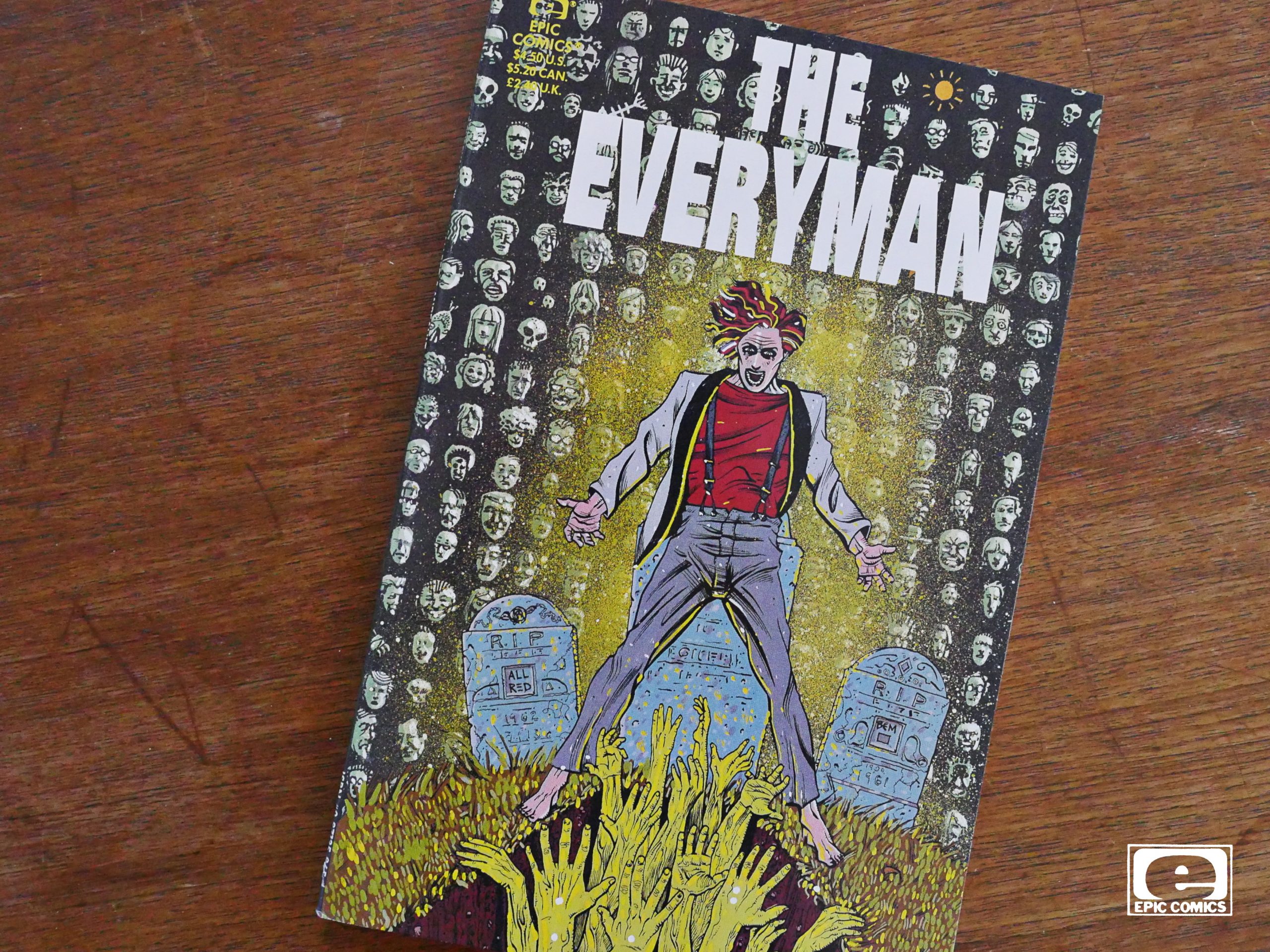 The Everyman (1991)
by Michael Allred and Bernie Mireault

I loved Mireault’s comics back then, but the publishing history was so convoluted that I’m not sure I ever read them all. It was a fun concept, and the books were engaging, but I have a feeling that it kinda petered out? I should re-read those comics at some point…

Hm. Nobody has put out a complete The Jam collection? Shame!

Allred is, of course, a super-star now, but I did lose track of him in the 90s. I loved Graphique Music, but he seemed to streamline both his artwork and his storytelling as time went on, and I basically lost interest. I still have a tendency to snap up new work of his if I happen upon it… 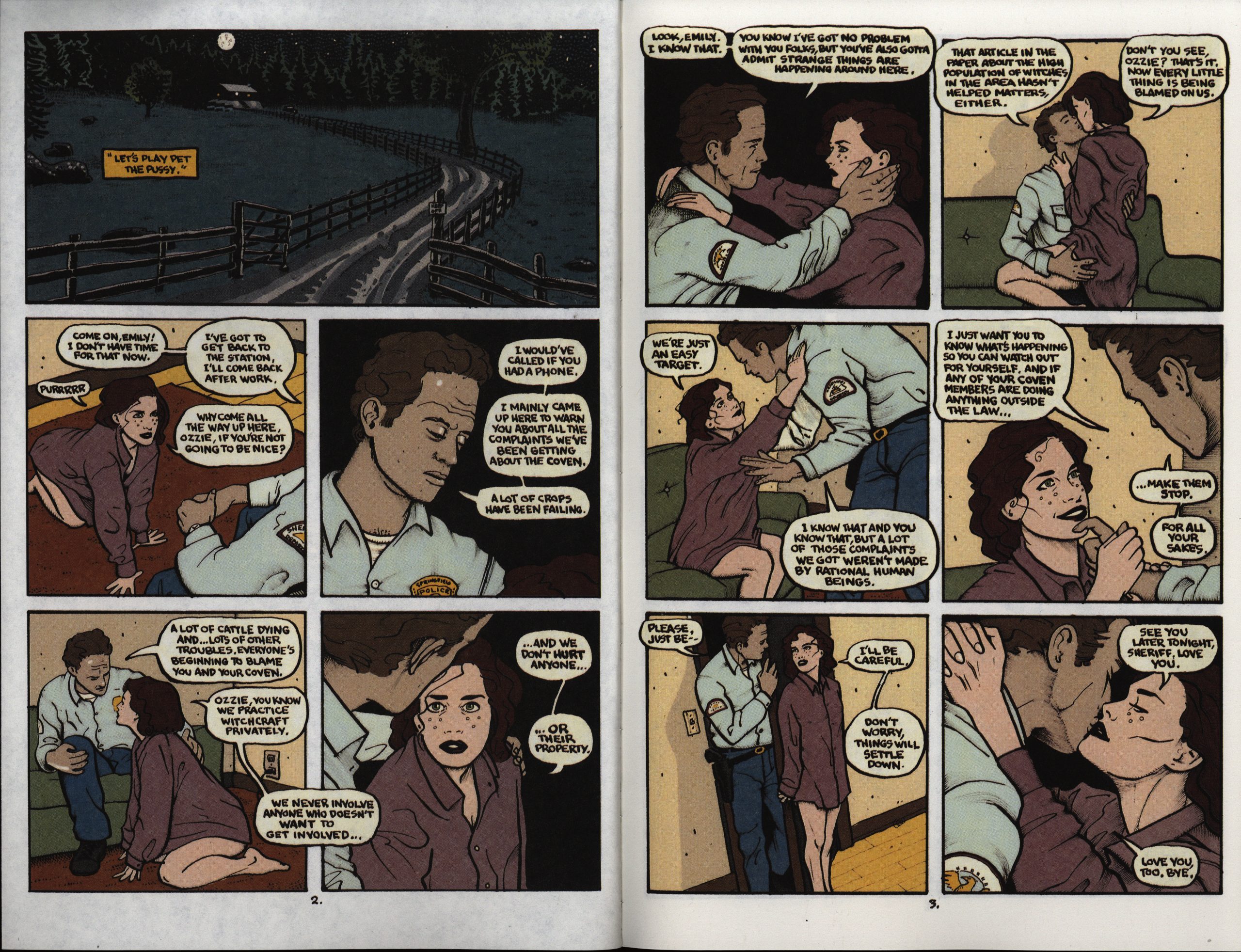 Wow. This is so bizarre to look at. The guy’s face is 100% Mireault, and the awkward poses (and slightly wonky proportions) of the girl (especially in the second and eight panels) scream Allred. It’s so weird seeing their massively distinctive separate styles smushed together this way. 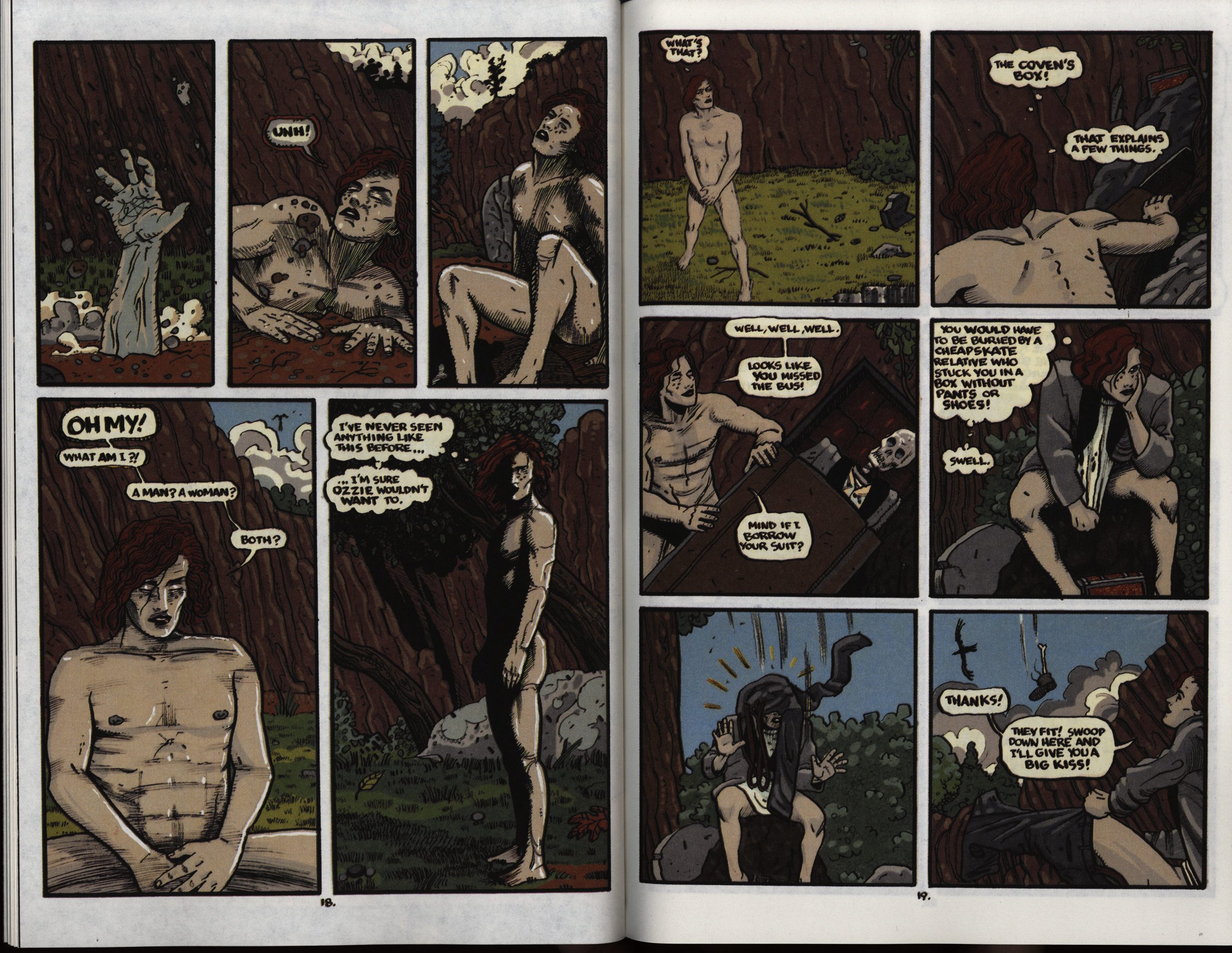 Not that it looks bad or anything, but it certainly takes some getting used to.

The plot is a basic rape/revenge (possibly without the rape, but with murder) story. 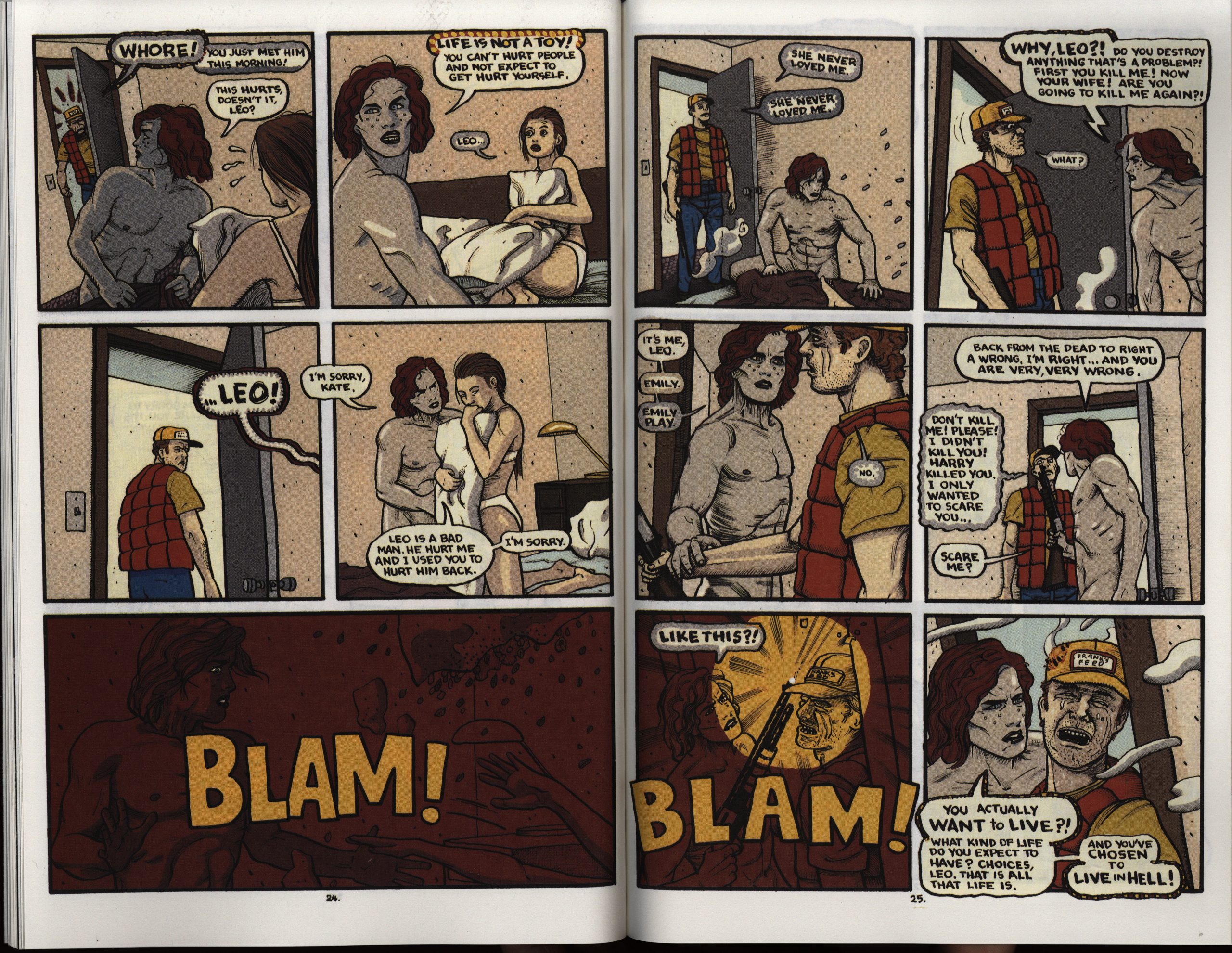 It doesn’t make much sense, though — why, for instance, did Emily Play (see) induce their killer to kill his wife? It seems like a really roundabout way of getting revenge, not to mention being a really shitty plot development.

The layouts are also just kinda sloppy — the two BLAM panels being positioned like that throw everything out of whack.

So I don’t know what this comic is, really. Just two pals goofing off on a story? On the one hand, it seems so unambitious and in-jokey, and on the other hand, there’s more going on here than in strictly necessary. They set up the structure for a continuous series, but it’s not like they really make that series seem very… pressing.

The Everyman is the newest feature of
Marvel’s Epic horror line, although
the comic is more supernatural than
horrific.
It concerns Emily Play, a benign
witch raped and murdered in a small
town, and her coming back for
revenge in the body of an androgynous
supernatural being of vengeance, the
Everyman (although the being is never
given that name in the story).
This sounds rather cliched in out-
line, but co-creators Dalton Allred and
Bernie Mireault breathe fresh life into
the plotline. For instance, rather than
have Emily/Everyman kill her rapist
and murderer in the book’s climax,

Pretty unique for a Marvel hero.
Allred and Mireault’s art is gor-
geous. Apparently, the two men paint-
ed animation cels to create the tex-
tured colors and vibrant linework
here—it’s a unique effect, and quite
attractive.
The Everyman seems to be a pilot
for what looks like a pretty good
series. It has some plot holes and is
occassionally a bit hard to follmv. But
the idea has promise. Let’s hope
Allred and Mireault get a chance to
bring back their unique and
compassionate spirit of vengeance.

Sachs basically retold the entire plot, which is a bit excessive. I mean, even for me, on a blog 30 years later.

LANG: When did The Everyman
come into this?
BE.M: Well, around this time, he said
he’d get The Everyman going and I
said, “Yeah, sure.” So, a month later,
he called me up and said Carl Potts
from Epic had tentatively agreed to do
The Everyman. A little after that, it was
a go, one of the great shocks of my life.
LANG: Why was that a great shock?
BEM: Why’? Because I genuinely
don’t expect anything out of this in-
dustry (laughter). I expect to work
hard doing comics because I love it,
then die, then later on, someone will
reprint my stuff and, make a lot of
money. Somebody. Somewhere. But
not for me in this life. So, The
Everynan project got off the ground
and I got to use this coloring technique
that I like that’s like painting anima-
tion cells. It prints very, very well, and
I don’t think the industry has seen it
very often so I expect it’ll make quite
a splash.

WINDHAM: The Everyman
certainly seemed more ob-
sessive than Madman,
which obviously operates
more as an adventure
comic. You wrote The
Everyman before Madman
Adventures, yes?
ALLRED: Right.
WINDHAM: Was there any reason that you didn ‘t continue
with The Everyman?
ALLRED: Yeah, the main reason was Epic didn’t promote it
at all, and they were only interested in it being a one-shot.
Bernie Mireault — my partner on The Everyman — and I
wanted to continue. I came up with the story idea, then we
bounced it back and forth — that’ s why when you read the
credits it doesn’t say who drew it, who inked it, who
colored it, it just says, “Mike and Bernie.” The Everyman
is both Ofours equally. We had intended to have a continu-
ing series wherein each issue a new Spirit would have
control ofthe body and it would be a whole different story.
It was unlimited where we could go, determining on what
character was inhabiting the body. So it was very charac-
ter-driven, and we were really disappointed that we weren ‘ t
able to continue it.

The book has never been reprinted (or continued), and there aren’t many reviews of it out there. Here’s one:

It’s a wonder Allred and Mireault didn’t do more work together, because there’s something almost alchemical about their marriage. This book appears to be drawn by the former and inked by the latter, and they both have clearly stamped every page with their own style.