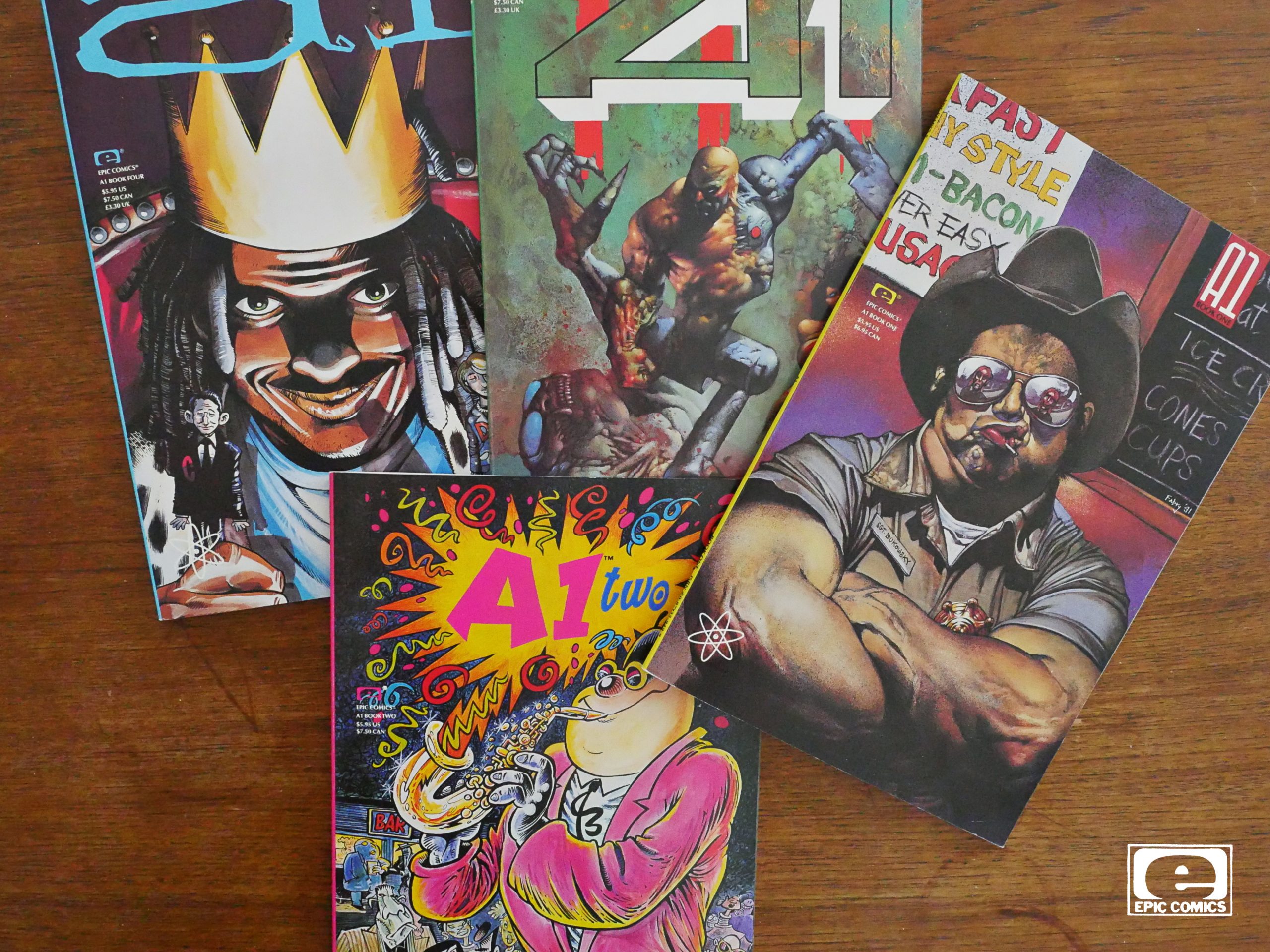 Hey! I remember A1 from the 80s. It was a British anthology; kinda a post-Escape thing, and it was really good. It was published by Atomeka, I seem to recall? 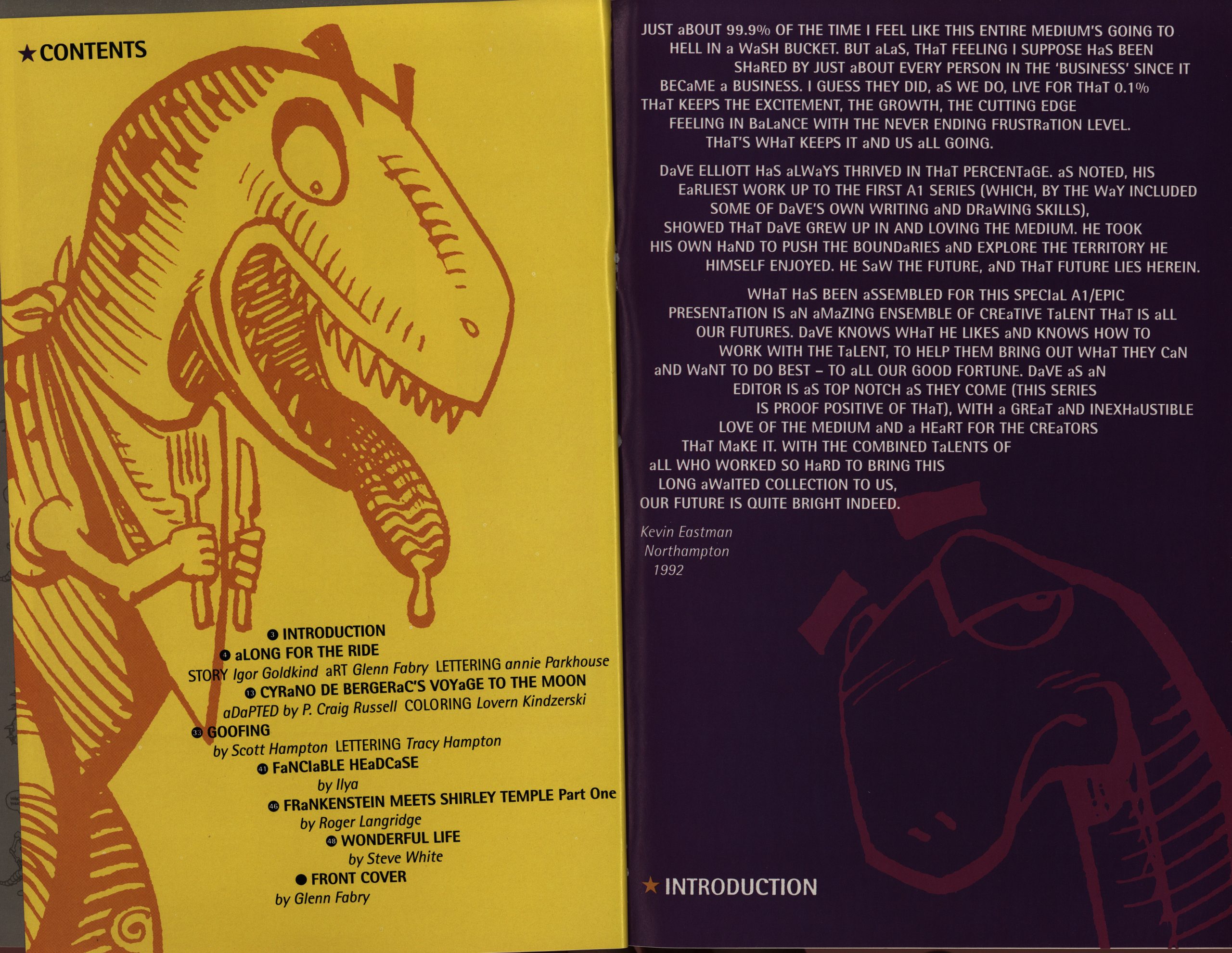 And this is volume two of that anthology! I had no idea. Well, now I’m excited. I have no idea why Marvel would take over the publication of this anthology, because anthologies rarely sell. Perhaps they just… wanted to… 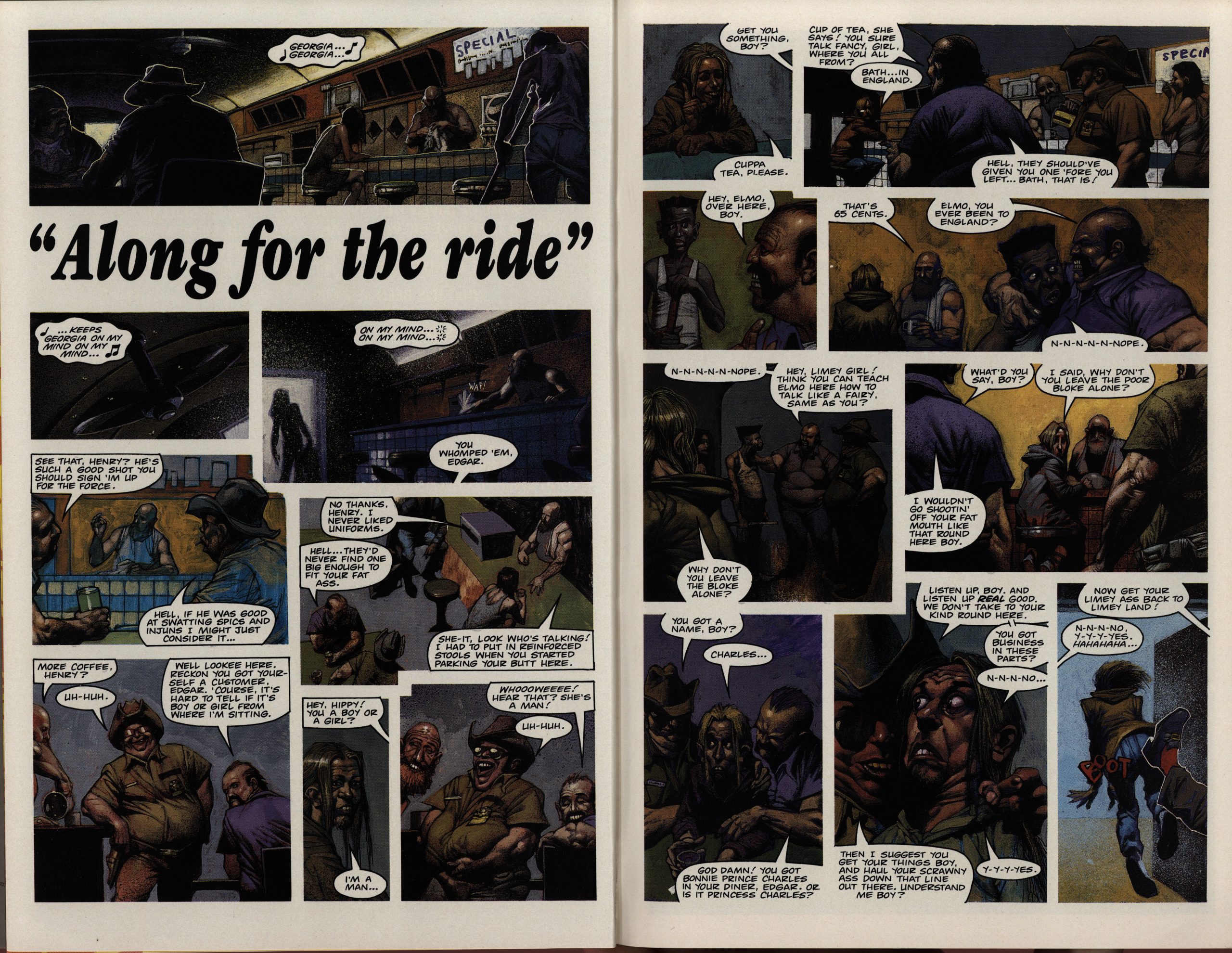 Amusingly enough, we start with a little ditty written by by Igor Goldkind and gorgeously painted by Glenn Fabry that’s all about a British guy going to the US and er experiences the culture there. Very much on the nose as a firing shot from the editors, right? 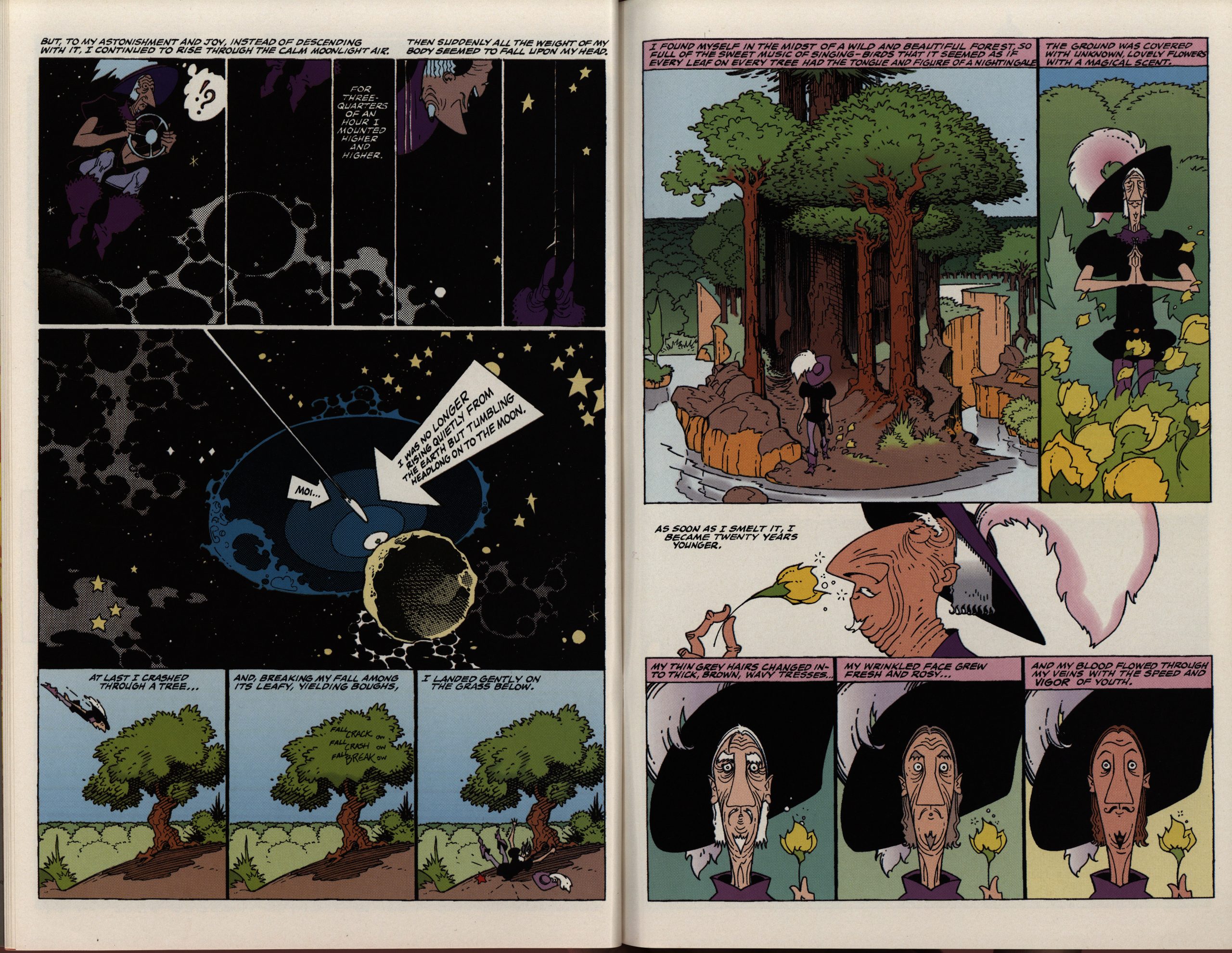 Wow! P Craig Russell (with Lovern Kindzierski)! I haven’t read this one before — it’s an adaptation of a Cyrano de Bergerac story, and the adaptation is perfect. The style is kind of mid-way between Russell’s cartoony style and his opera style.

It’s also the longest single piece in the series at 20 pages — most of the other pieces hover around the eight page mark. 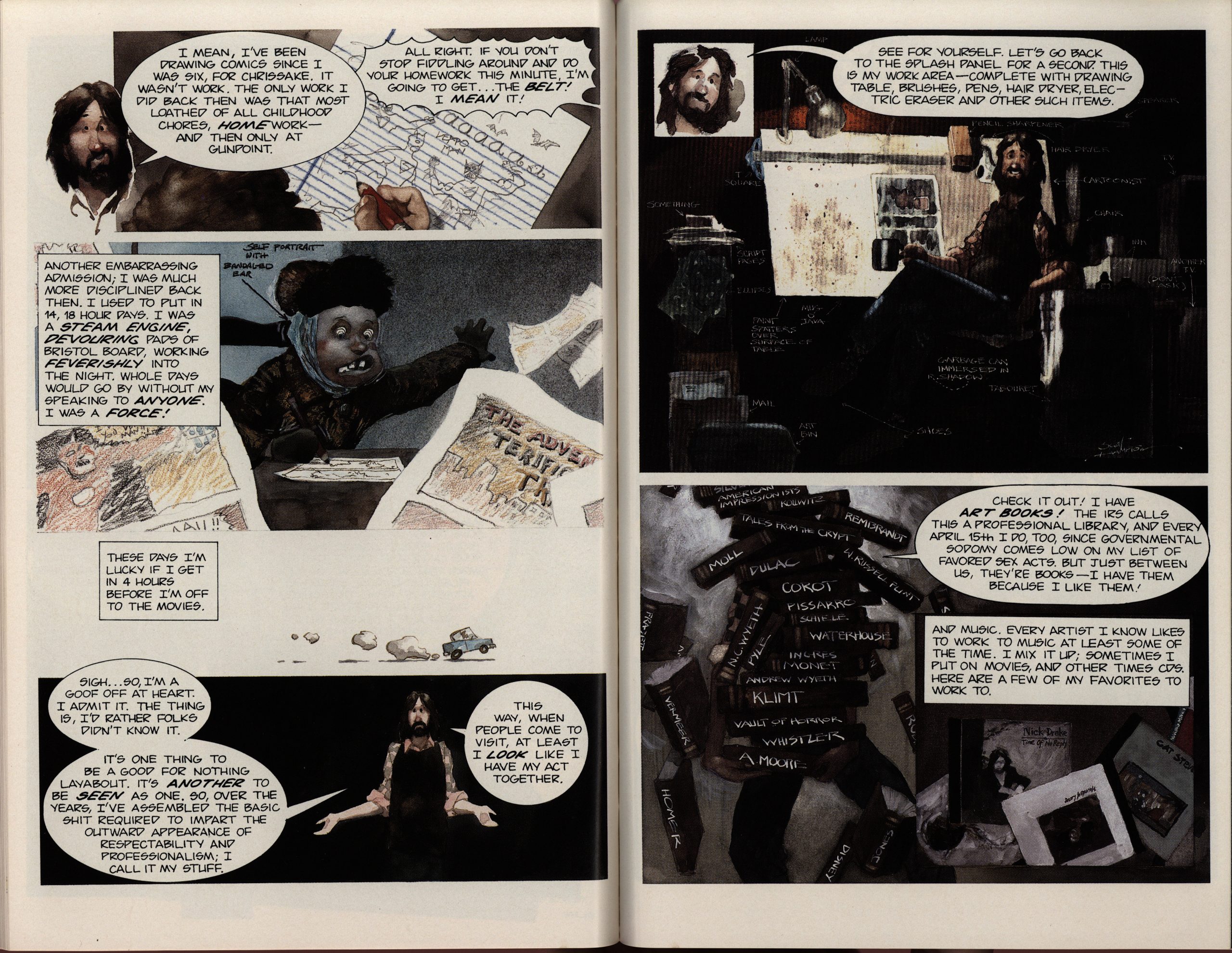 Scott Hampton does a fun little autobiographical anecdote. Perhaps a bit on the wordy side, but it’s amusing. 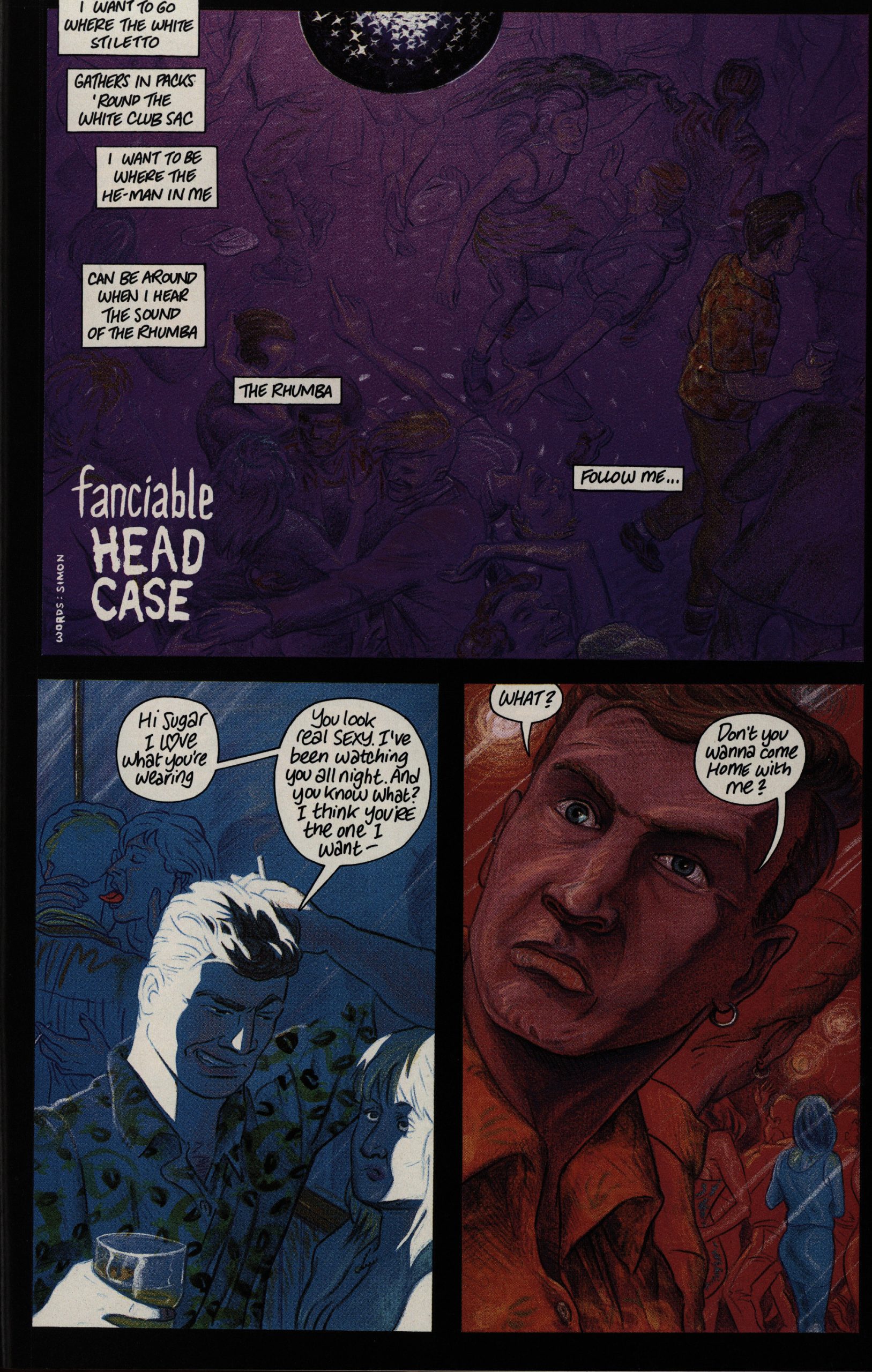 Ilya does a really strong (and unnerving) piece about sex and violence. 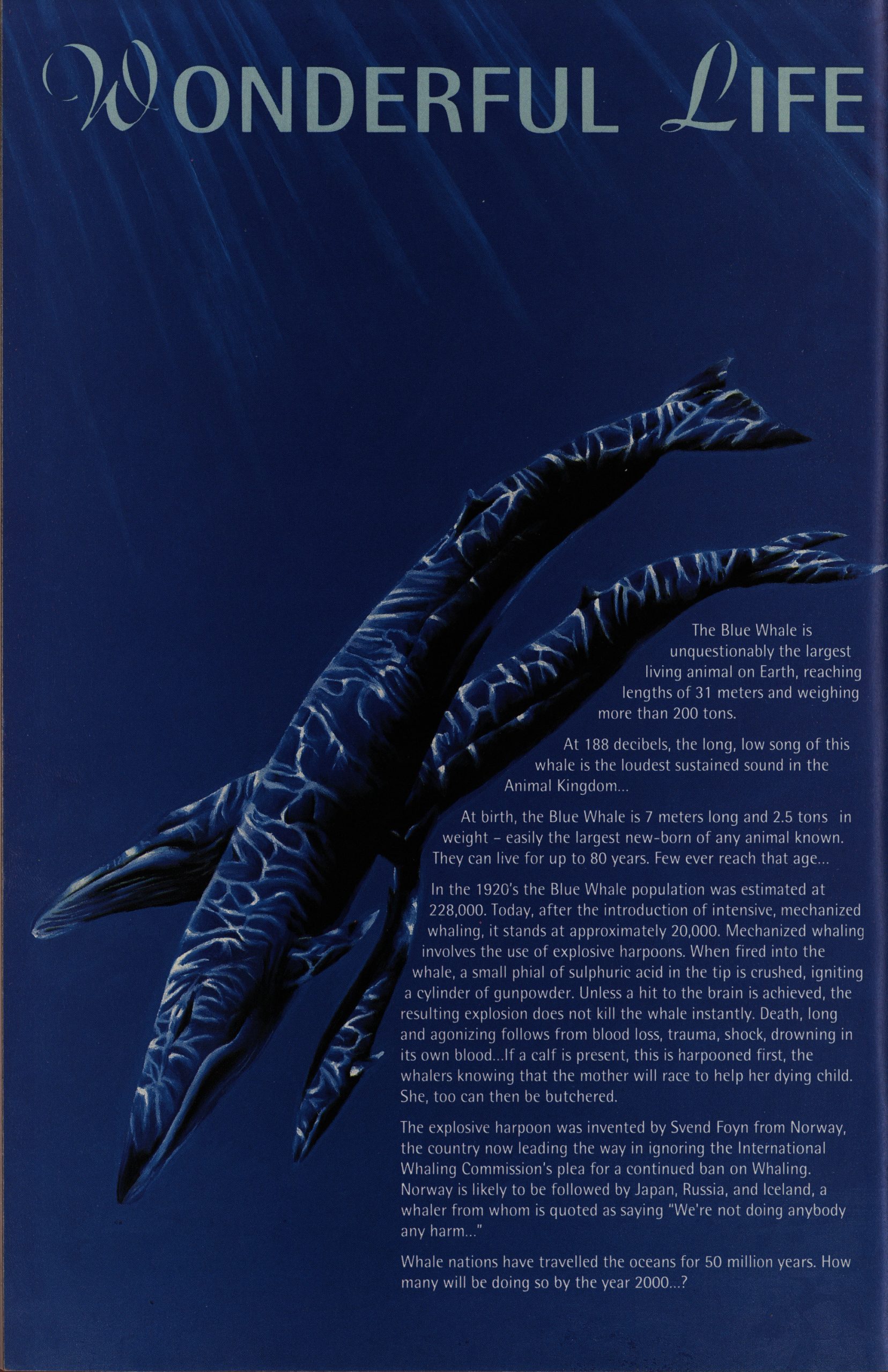 And then we round out the 48-page issue with a page about an endangered animal.

So… this is A1 as I remember it: It’s a great mix of humorous pieces (not ha-ha funny, but more arch) and serious pieces, straggling that area from semi-mainstream comics storytelling towards the indie aesthetic, but without any overt genre influences (sci-fi, noir, whatever).

In 1992, this is perhaps a bit old-fashioned — in the mid-80s, anything went, but by the early 90s, things had stratified a bit more, and you wouldn’t see somebody like Scott Hampton in the same magazine as Roger Langridge.

So it feels a bit nostalgic (even at this remove), but it’s also a mix that really works: The issue feels cohesive, but not samey. 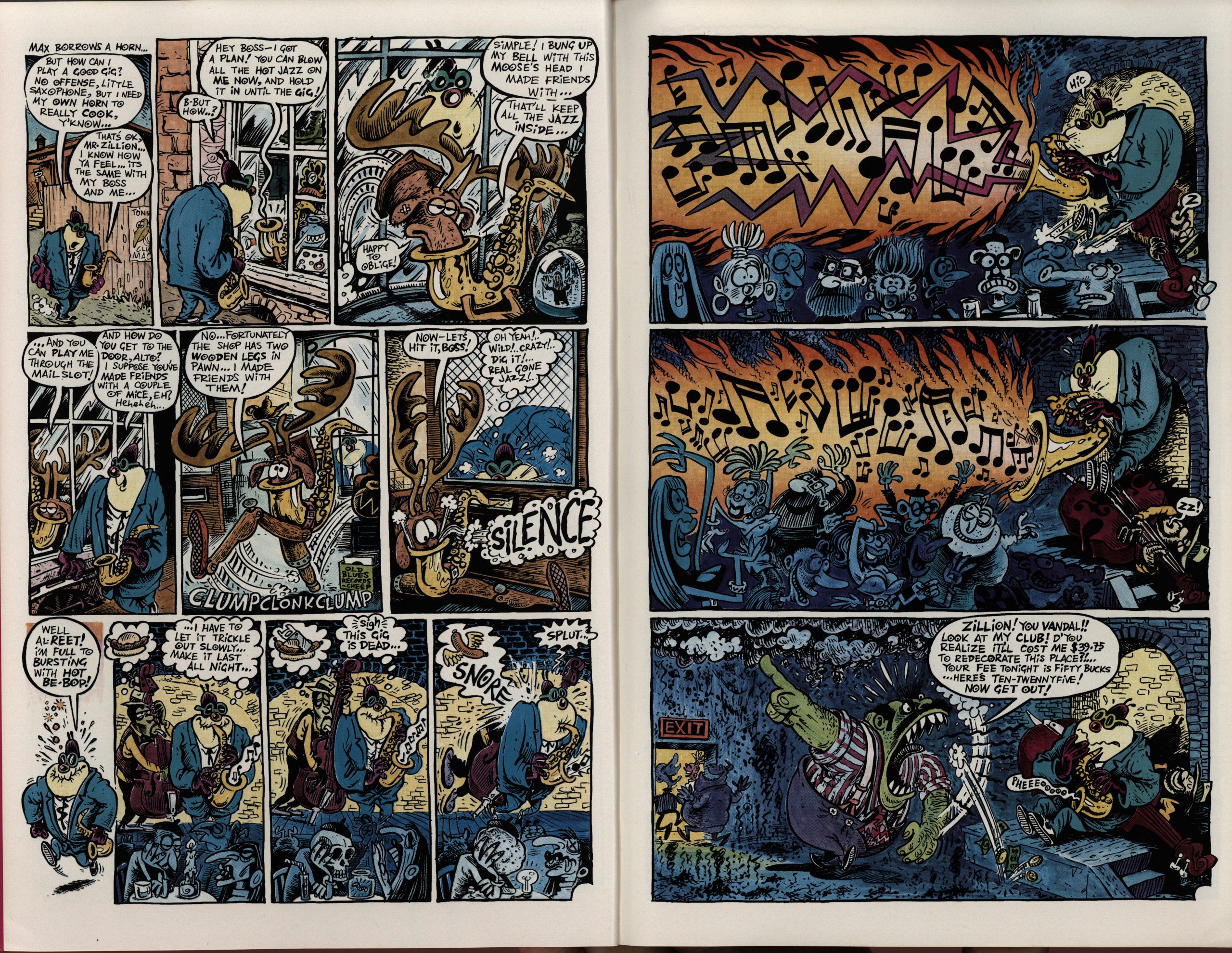 The second issue starts with a too-short Hunt Emerson strip, and it’s more coherent than his stuff usually is. Great fun. 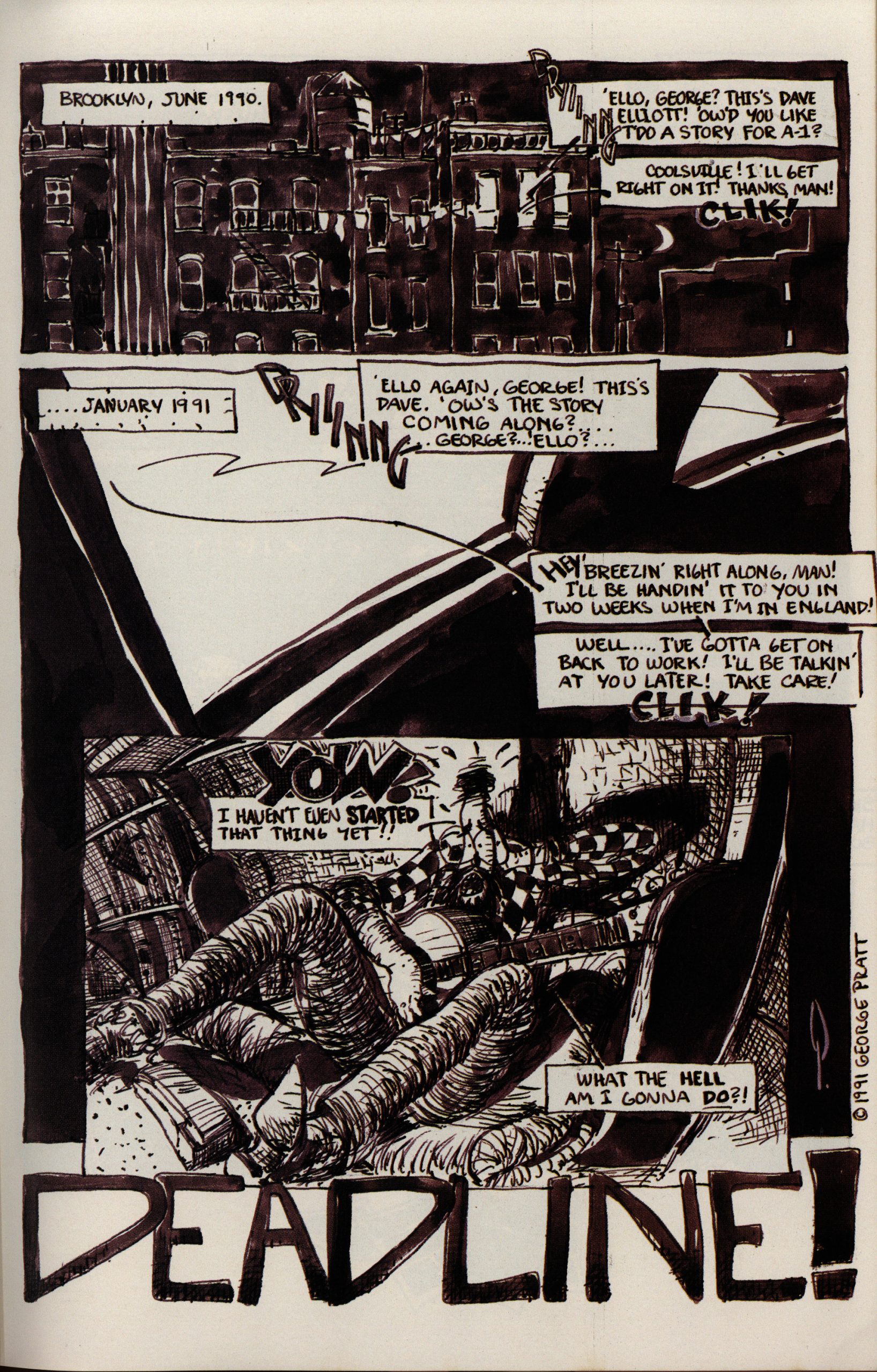 George Pratt (who appeared as a character in the Hampton story in the previous issue) does one of those “I have no idea what to do” strips… and Hampton features in Pratt’s strip. It’s fun, and it gives a sense of connectedness to the anthology. We go sci-fi with a story by Philip Bond and Joe Beeston, and it’s probably the weakest thing in the series. But it’s OK; it’s a bit muddled. 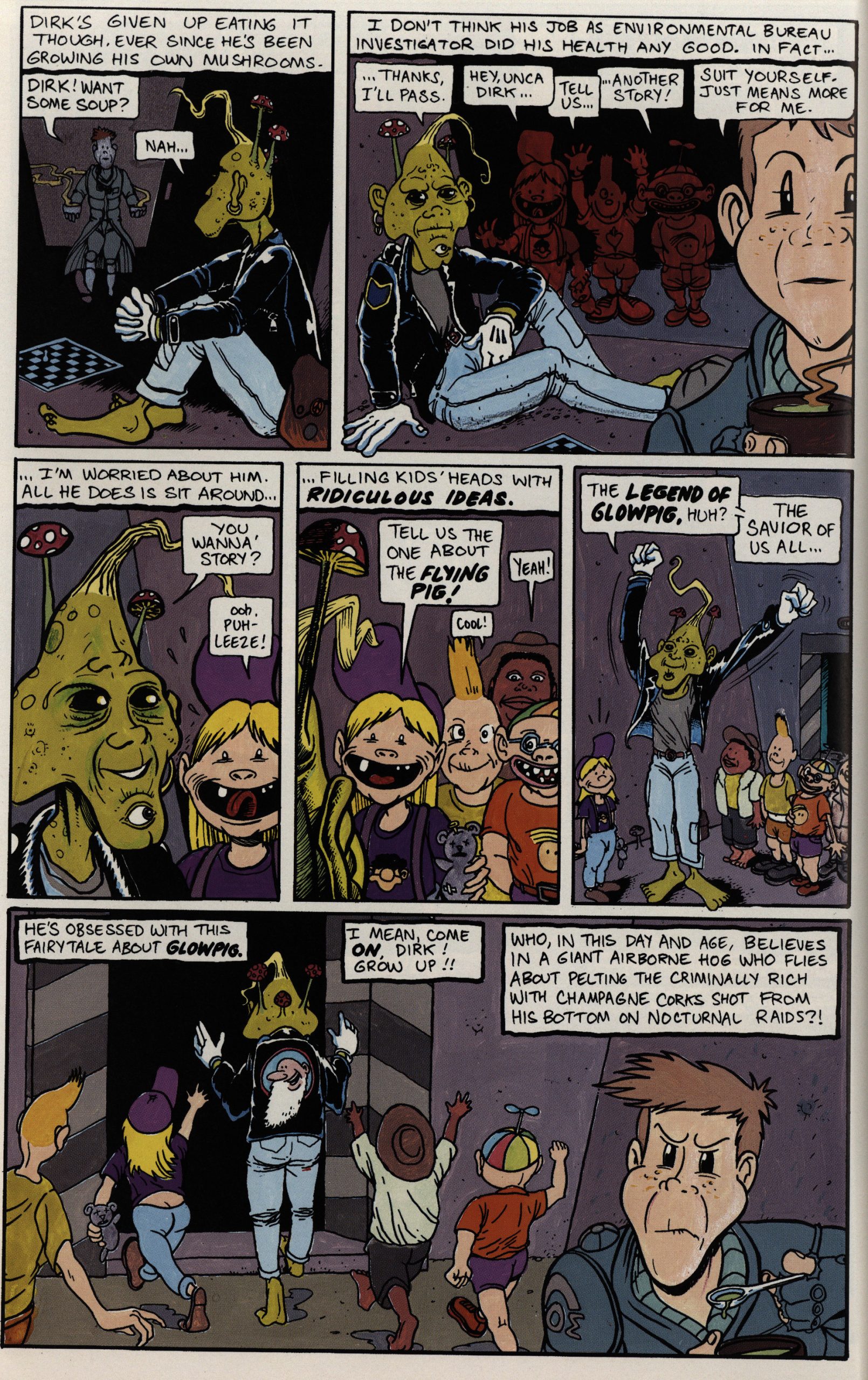 A very early Nick Abadzis piece. I’ve read quite a few of his later works, and he gets better. The strip here seems to be in search of a reason to exist. 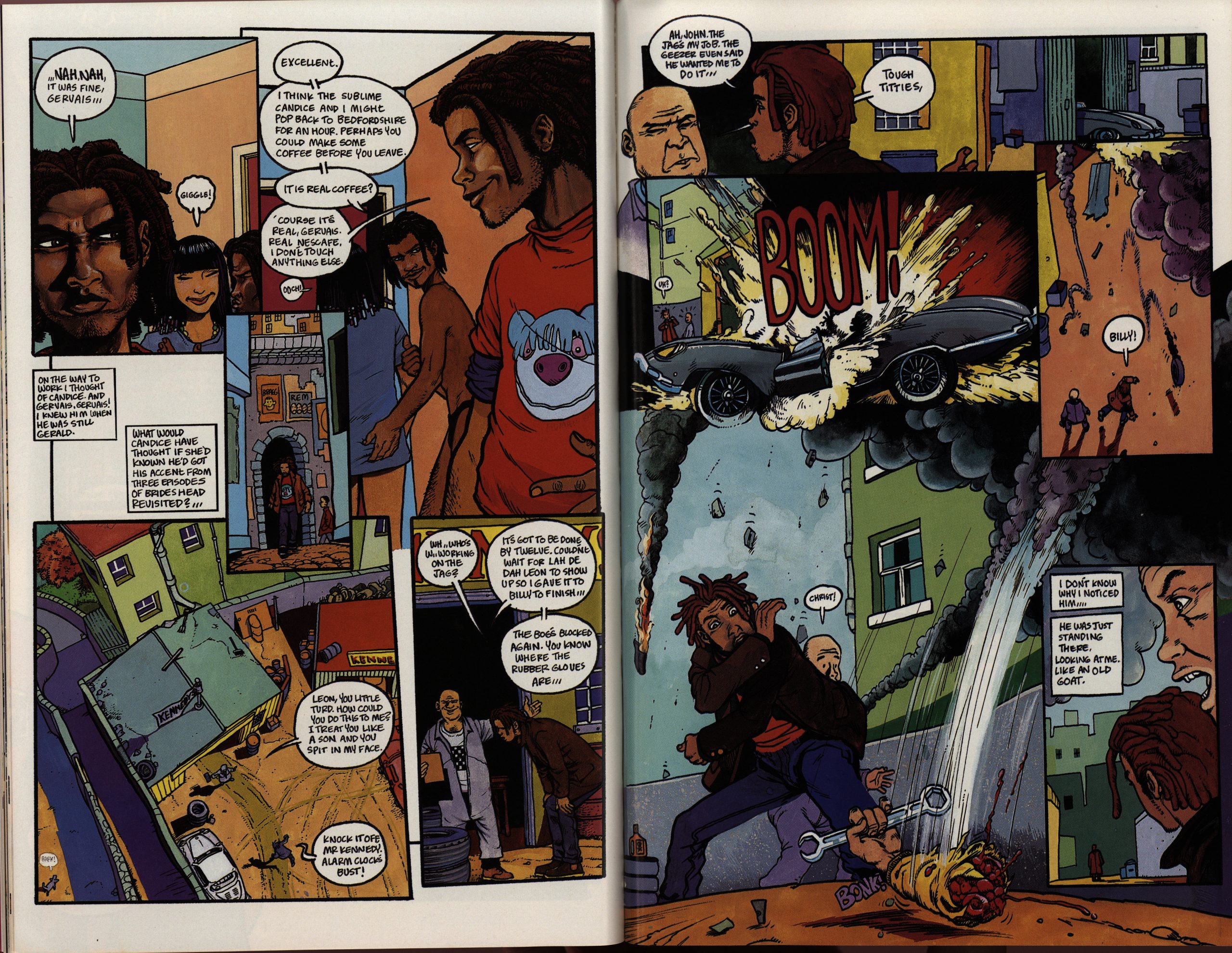 Peter Milligan and Jamie Hewlett does a three-part serial over the final three issues of A1, and it’s just the right amount of continuity for the anthology. The story is a bit more traditional than the rest of the contents (there’s a twist and some ultraviolend and an ironic ending and all the rest), but Hewlett’s artwork is compulsively readable. 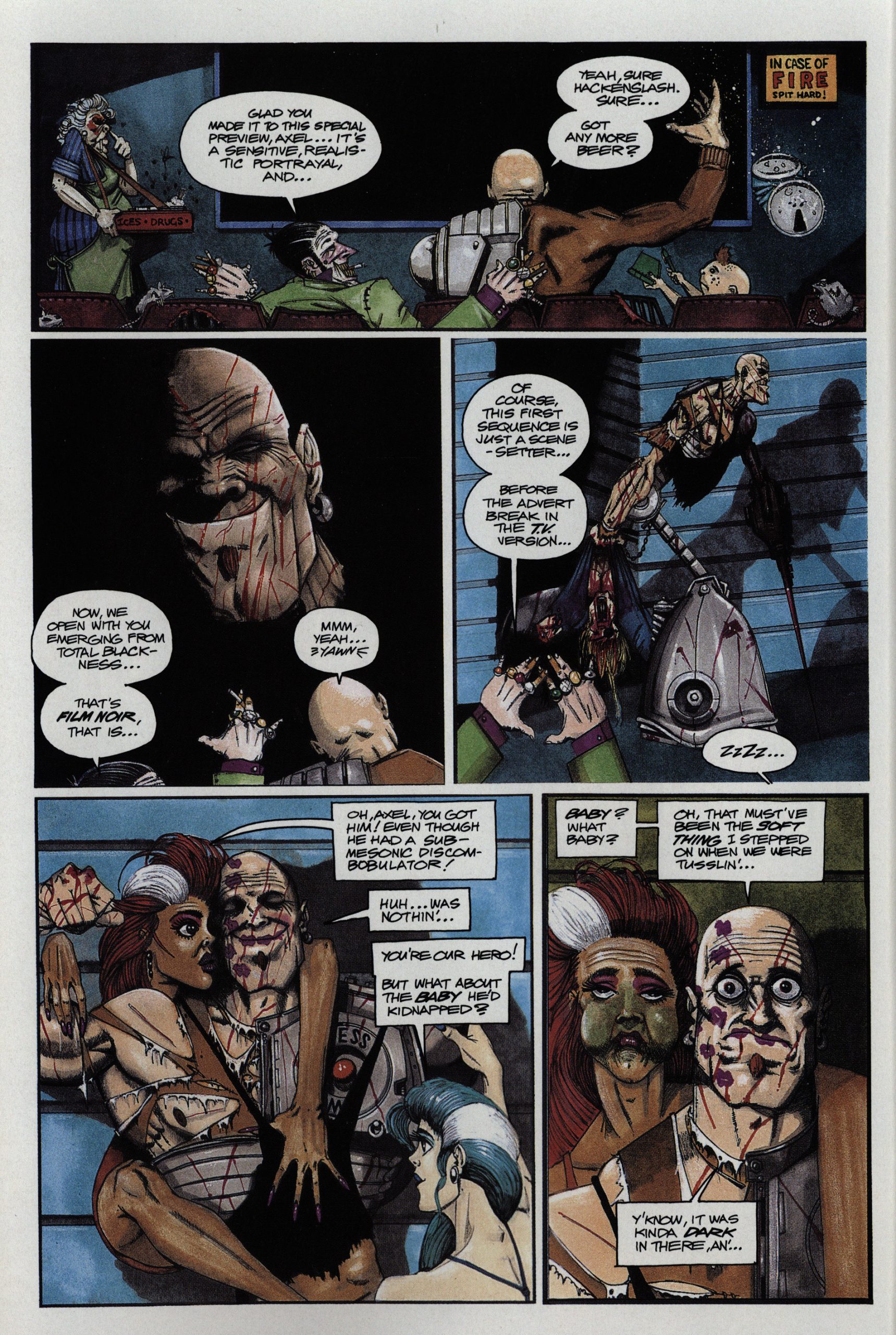 We get a very compact Axel Pressbutton story, and it kinda sticks out here. Sure, A1 may have been a throwback anthology, but that’s casting the net a bit too far back). Roddy and Colin MacNeil do a story about how toffs who wear unusual clothes deserve to die. (Only two of the toffs die, though. One is only threatened by a chain saw, but it’s not actually used on him.)

I guess I could write something about the sturdy class warfare that’s still very much a thing (on both sides) in the UK, but I’m totally running out of room here. 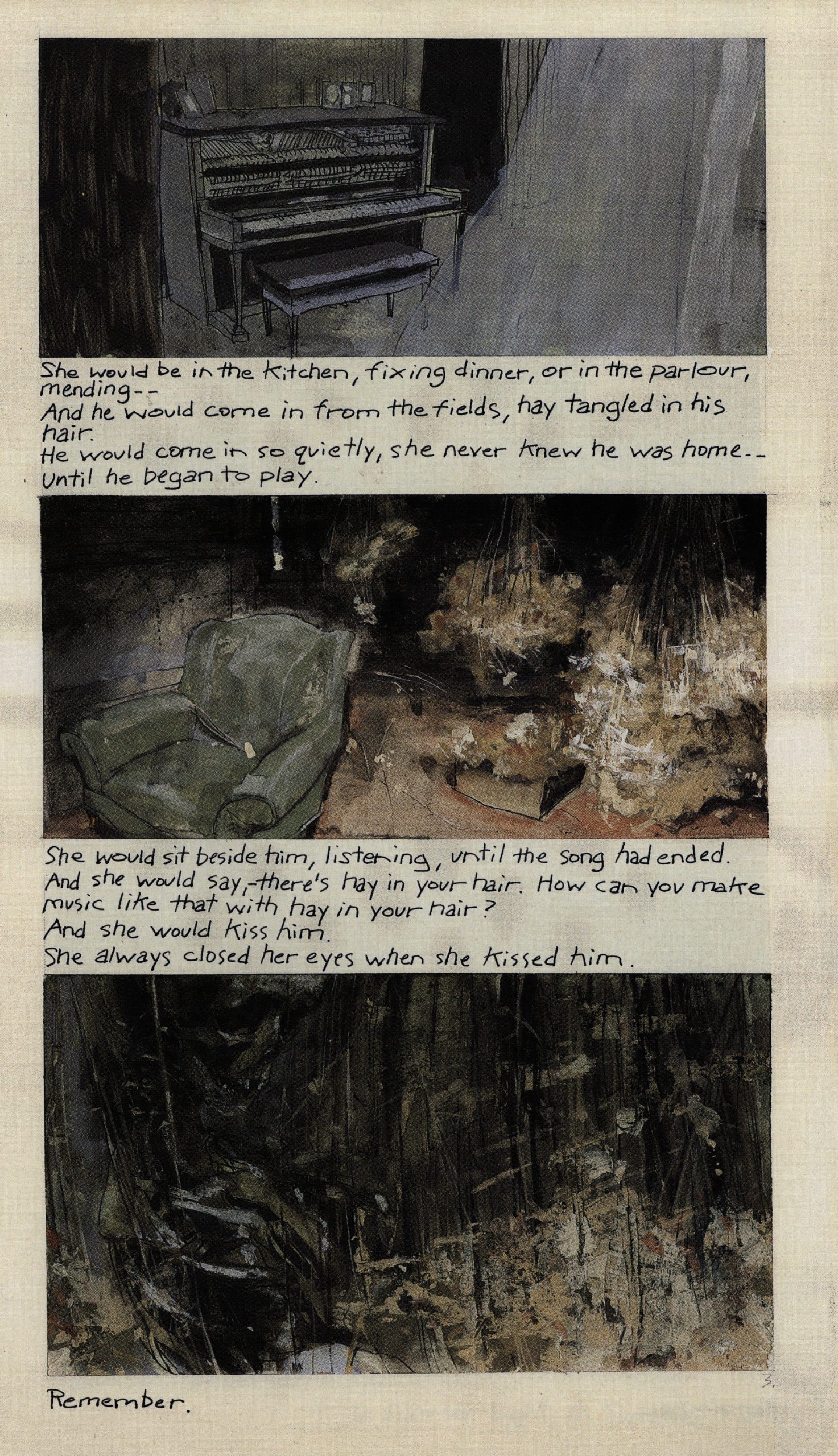 Kent Williams stops by for a little story about death and loss.

Most of the people featured in this anthology are British, but there’s about one piece by an American per issue. And they’re all people who have been working in US alternative comics since the early 80s, so I’m assuming that the editor is picking out some old favourites. And he has good taste. 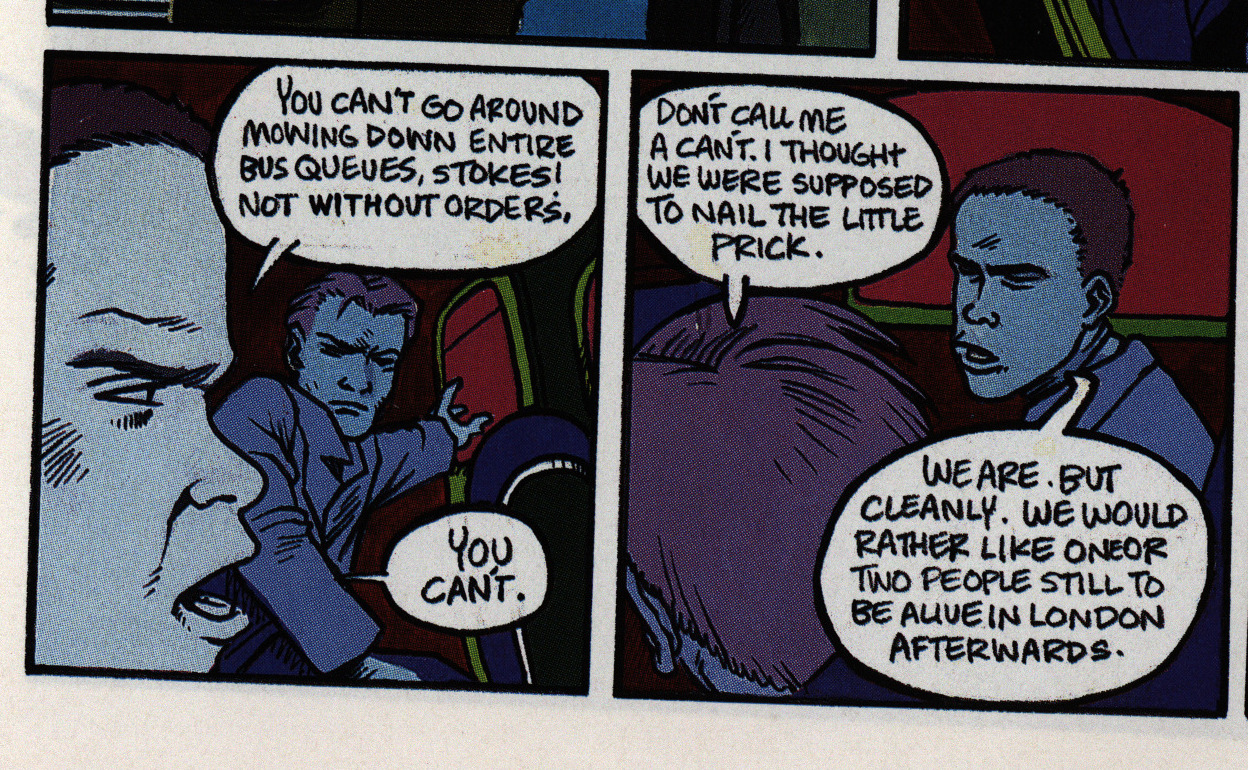 They almost snuck in a swear word there. Tee hee. 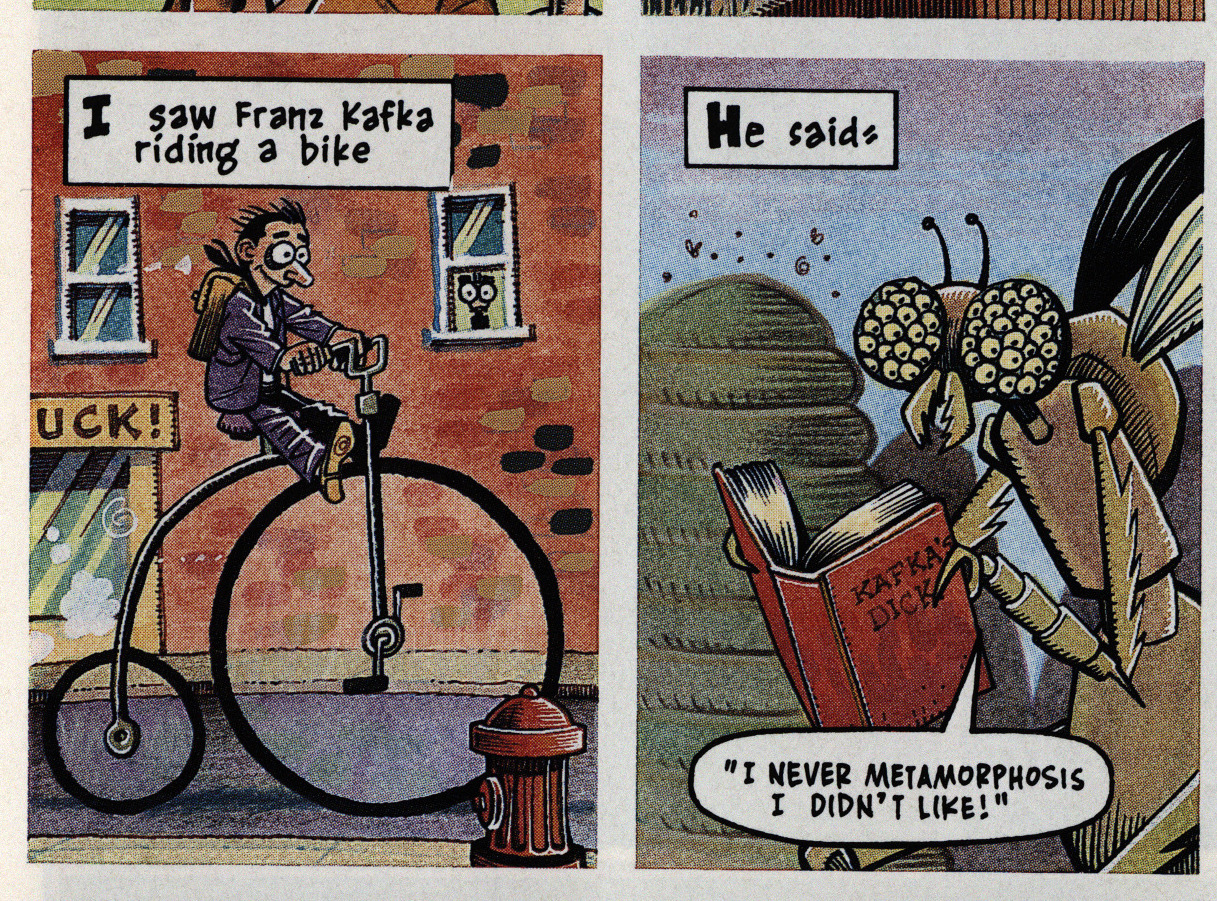 Oh yeah, I haven’t really mentioned that Roger Langridge appears in every issue, mostly with a two-page spread of amusing nonsense. 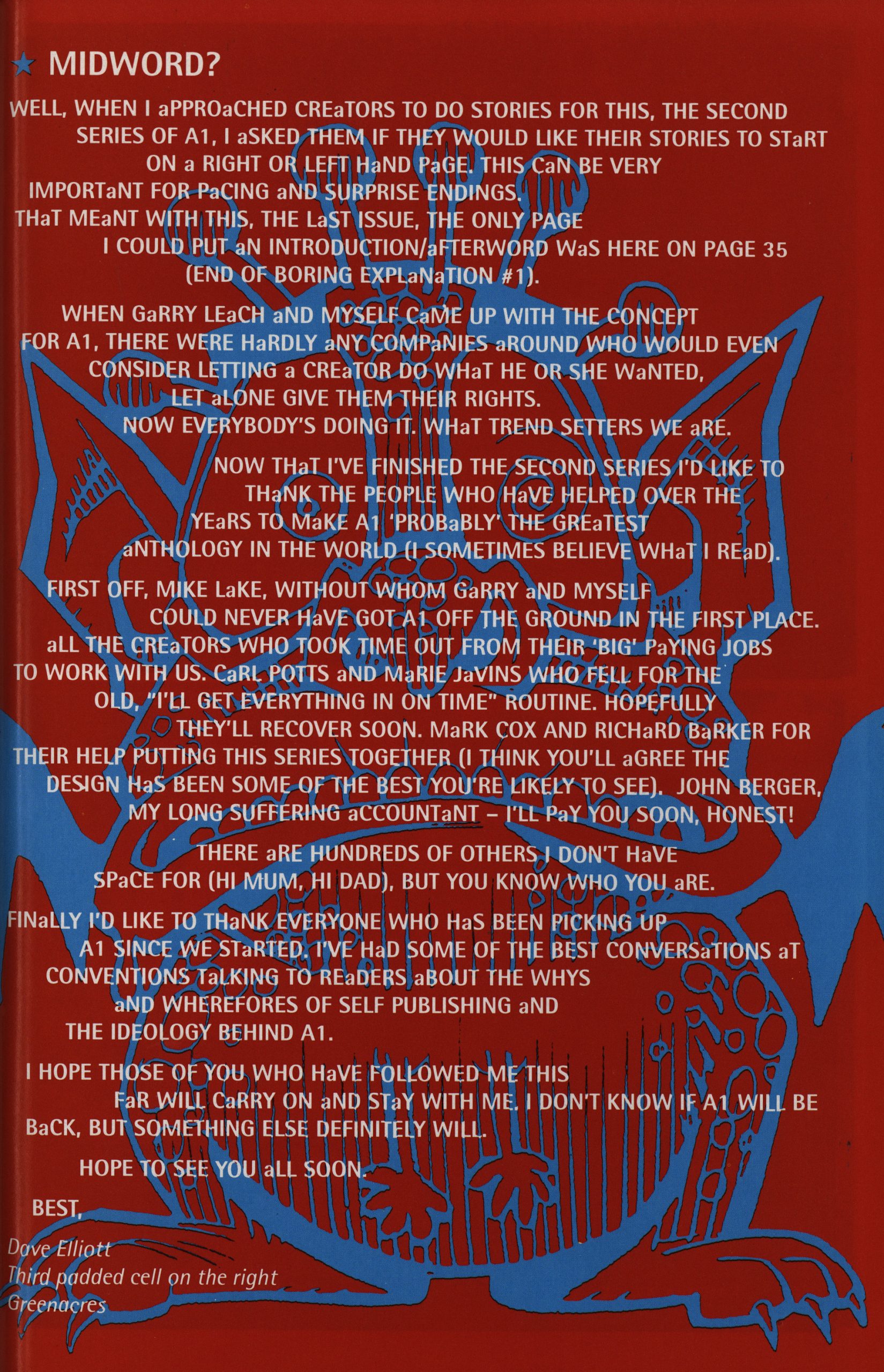 Hey, that’s thoughtful. I mean, asking the artists whether they wanted their stories to start on the right-hand or left-hand side. And then putting the introduction in the middle as a result… 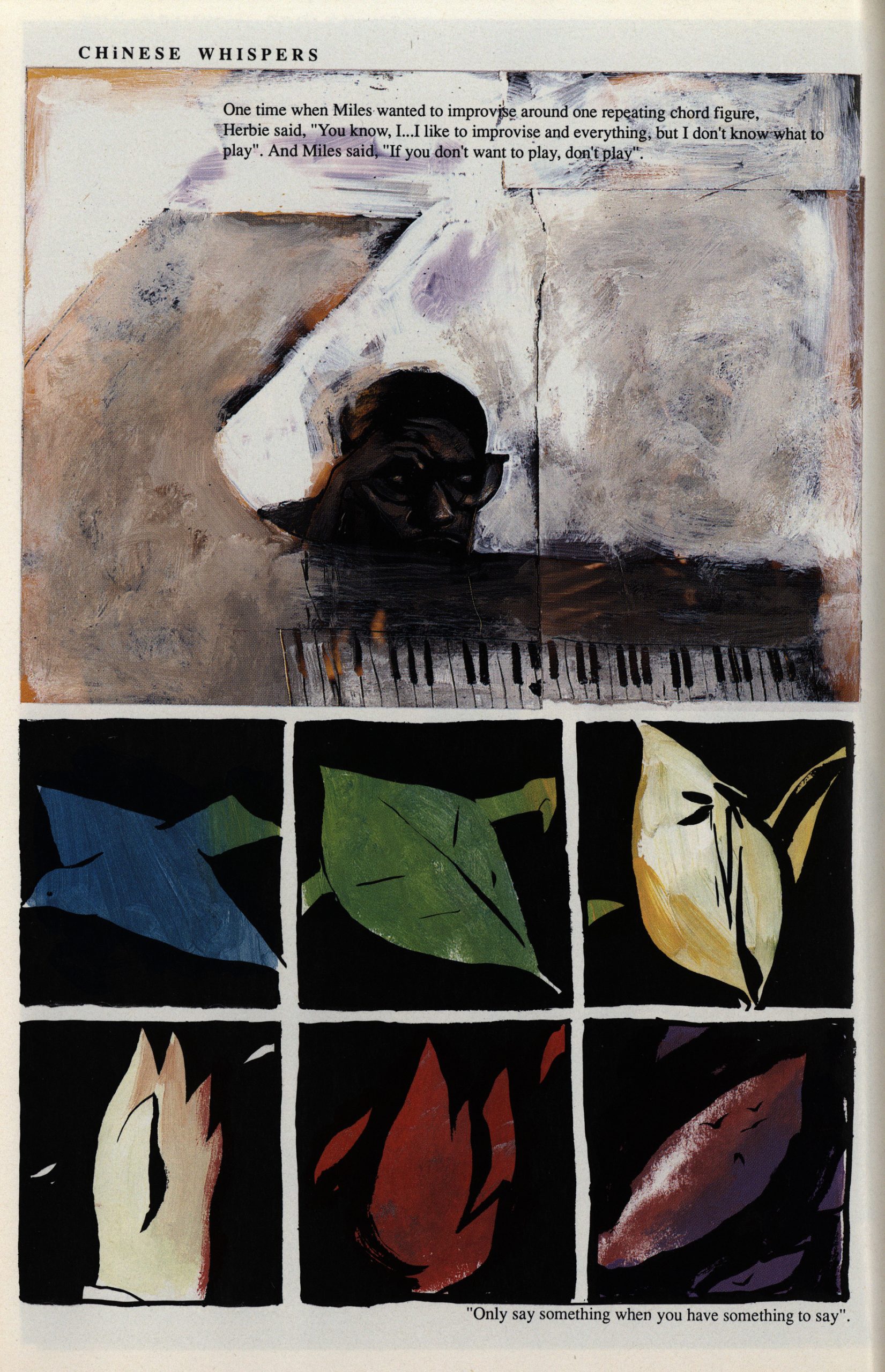 And finally, we have Dave McKean doing a bit about jazz.

All in all — this is an excellent anthology. Not every single piece was a total win, but most of them were, and most importantly: It’s just well put together. Cohesive, but with surprising delights.

It doesn’t look like this A1 series has been reprinted.

This was apparently the end of the series — no further volumes were published.

Hm… No, that’s incorrect. It was resurrected in 2013. I should try to find that one…

However this absorbing, inspiring oversized collection does contain a lot of extremely good and wonderfully entertaining material by some of the best and most individualistic creators to have graced our art form.

I was unable to find any reviews of the Epic A1 series on der interwebs, but with a name like “A1” and a publisher like “Epic”, google isn’t very helpful.