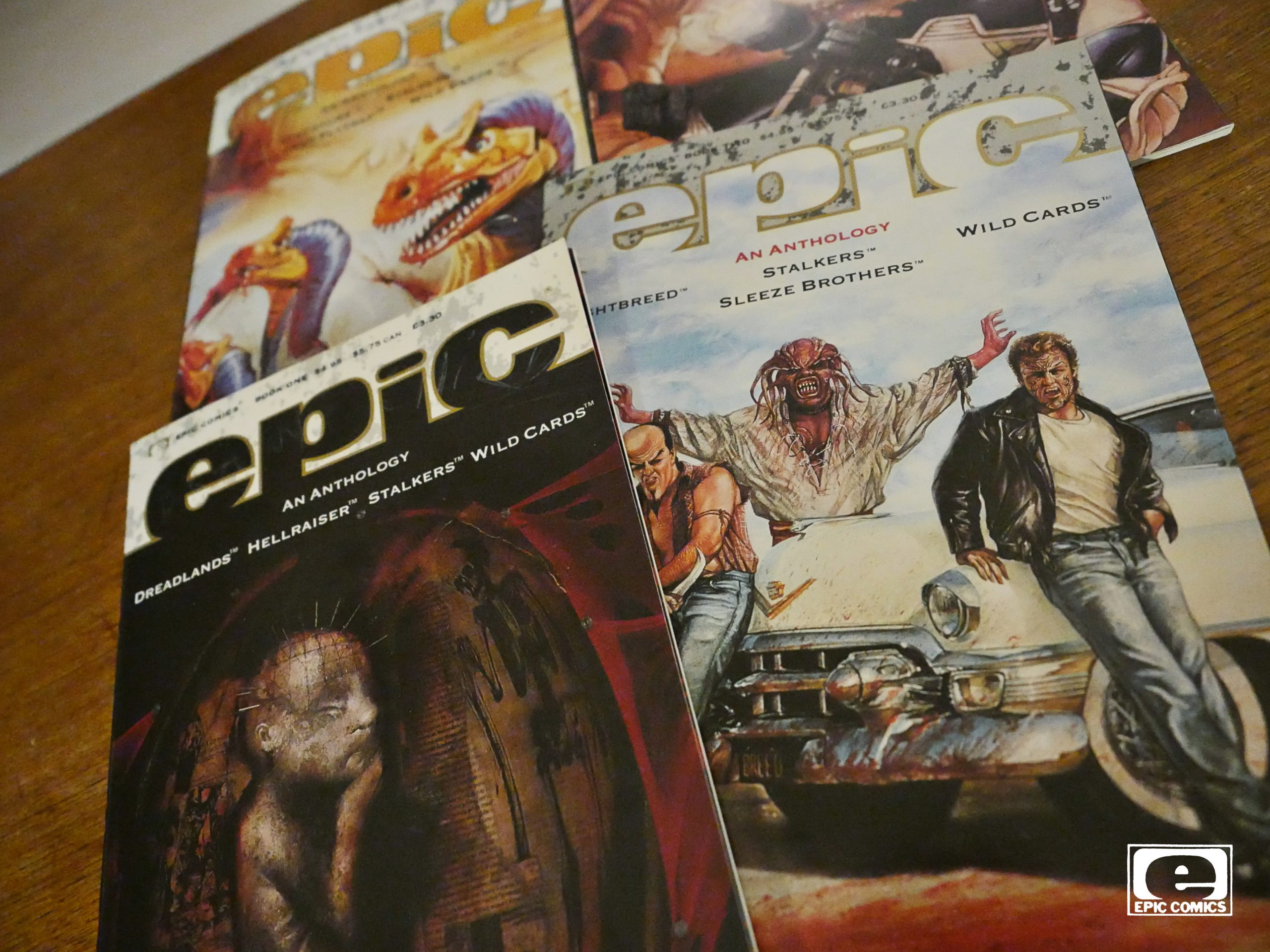 When I saw that the next thing I was going to read for this blog series was a new Epic anthology, I was all “yay”. Not that the original had been ahem without flaws, but it was a lot better than most of the stuff Epic was publishing in 1992.

But then I had a look at the covers. The first said: “Dreadlands™ Hellraiser™ Stalkers™ Wild Cards™”.

What the fuck? This anthology was just going to be featuring new bits from comics Epic were already publishing (or had published)?

And it’s a four issue mini-series? You almost never see anthologies that are mini-series. And then I read the indicia, and now I have a hypothesis:

Most of the artists on this project are British, and some of the writers are. So is this a product from Marvel UK published under the Epic banner? I guess that could make some sense… there might be a market in the UK for this? 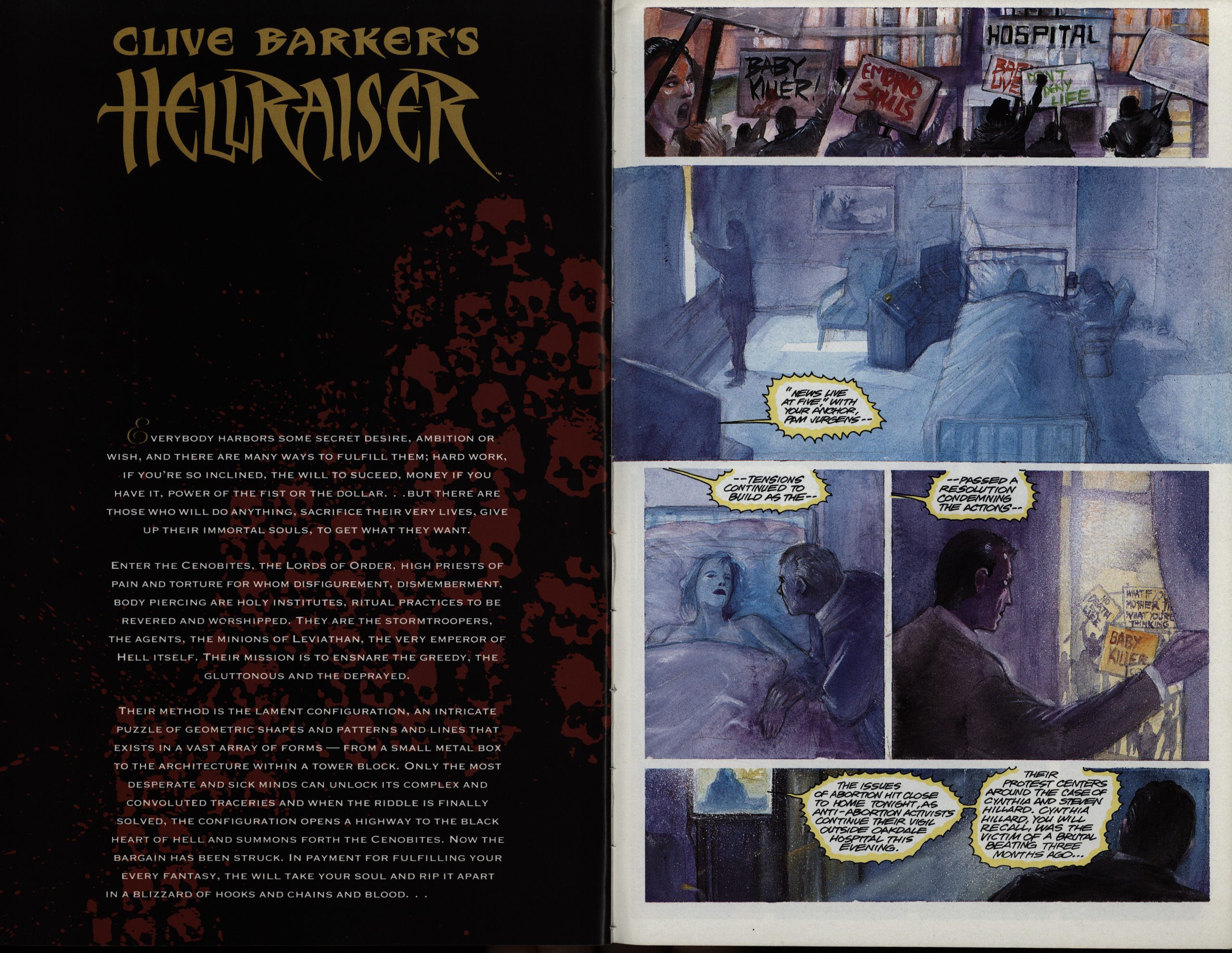 I’m not going to attempt to list all the creators; just follow the comics.org link up there. But the one Hellraiser story (perhaps the biggest “name” property here, so it starts out the series) has artwork by William Simpson (from Northern Ireland), and it’s a bit uneven, but striking. The story is, as with most Hellraiser shorts from Dan Chichester, inept, but it’s better than usual. I mean, it’s got a proper 50s twist ending. 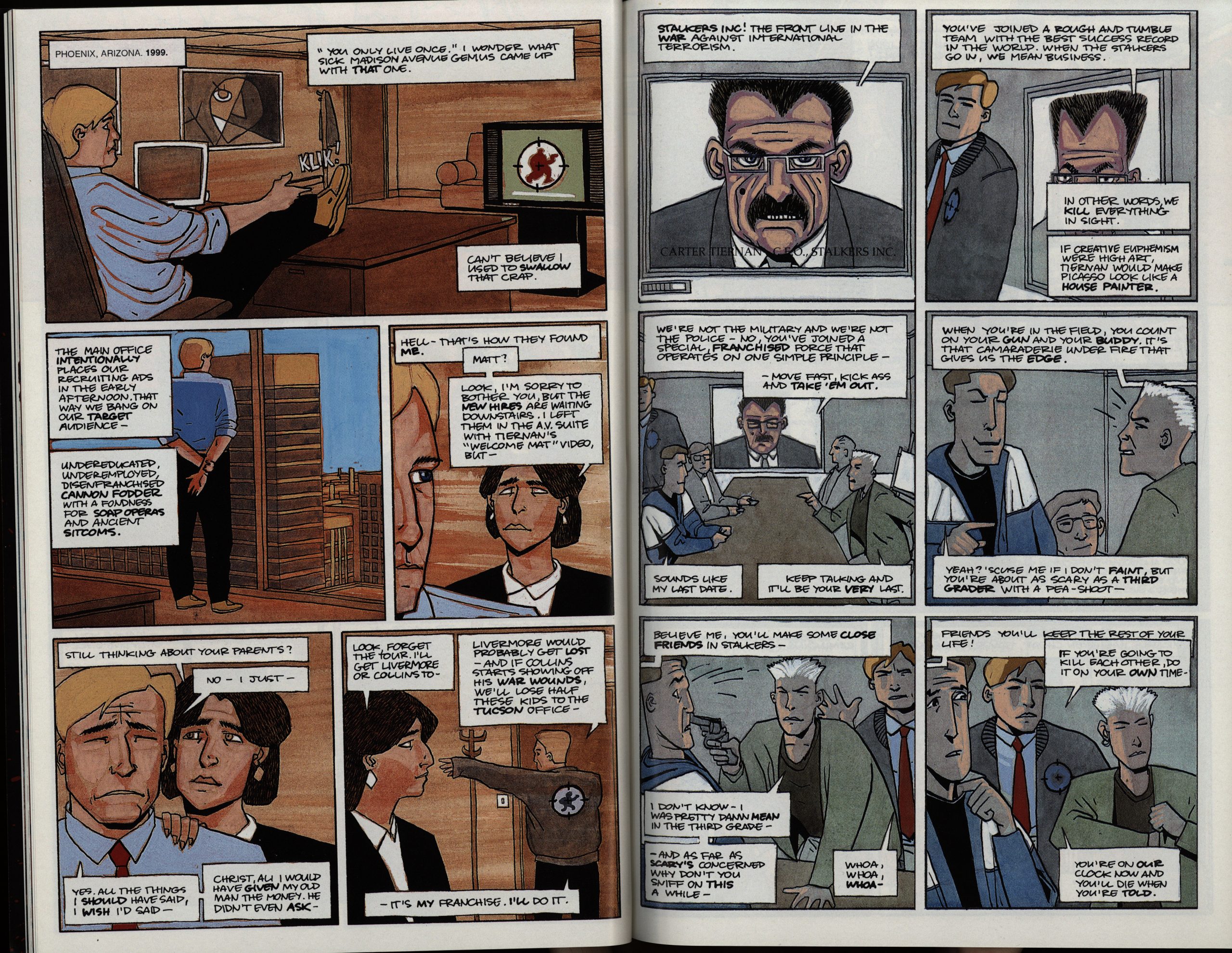 D’Israeli does the artwork on the only thing that appears in all four issues: A Stalkers story by regular writer Mark Verheiden. It’s wordy as hell, for no good reason, but it’s a story that works, and I really enjoy looking at these D’Israeli pages. 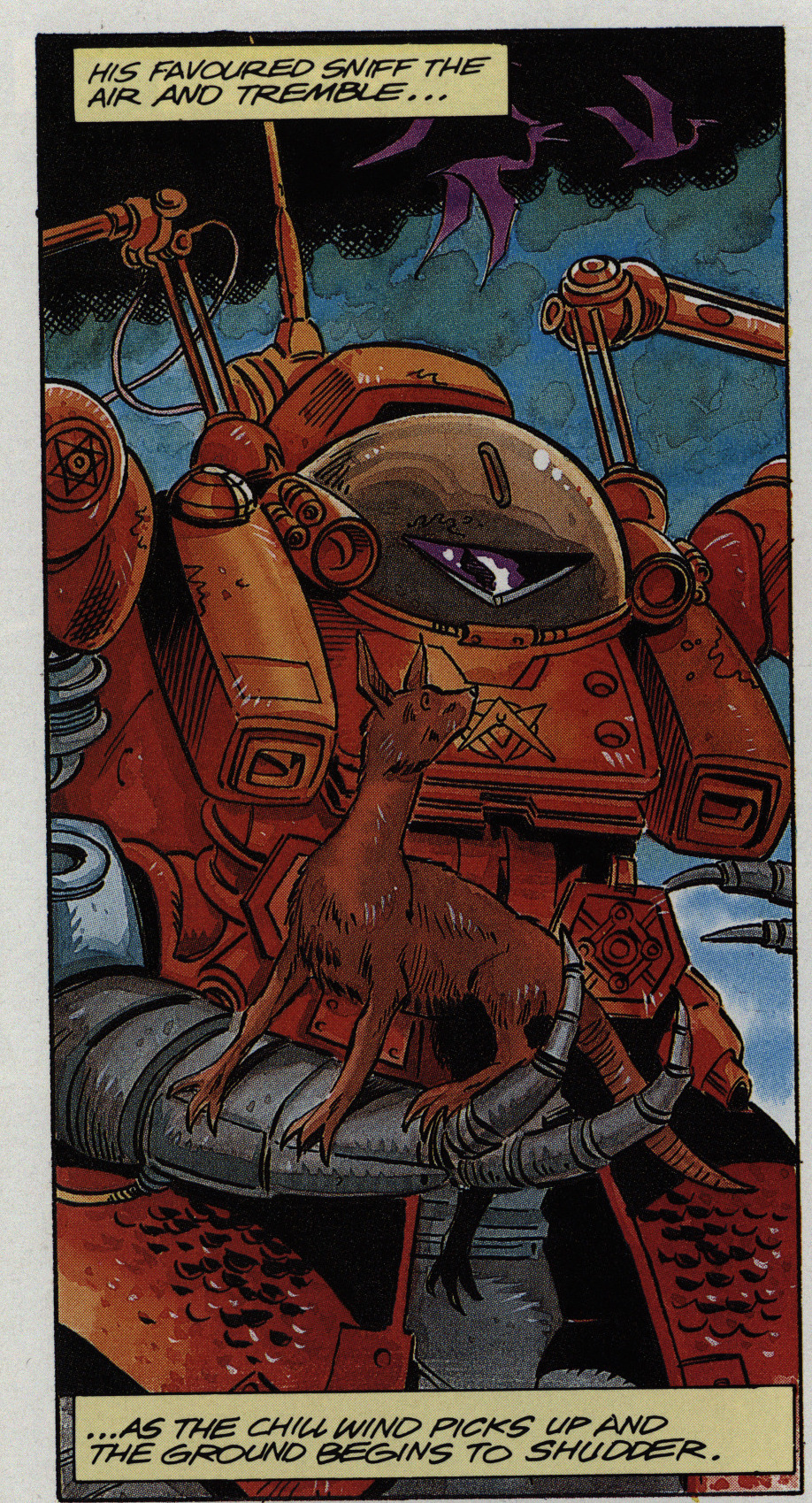 We get a coda to the Dreadlands series the Epic had published the previous year, and it’s better than that series, but must be completely incomprehensible to somebody that hadn’t read that beforehand. 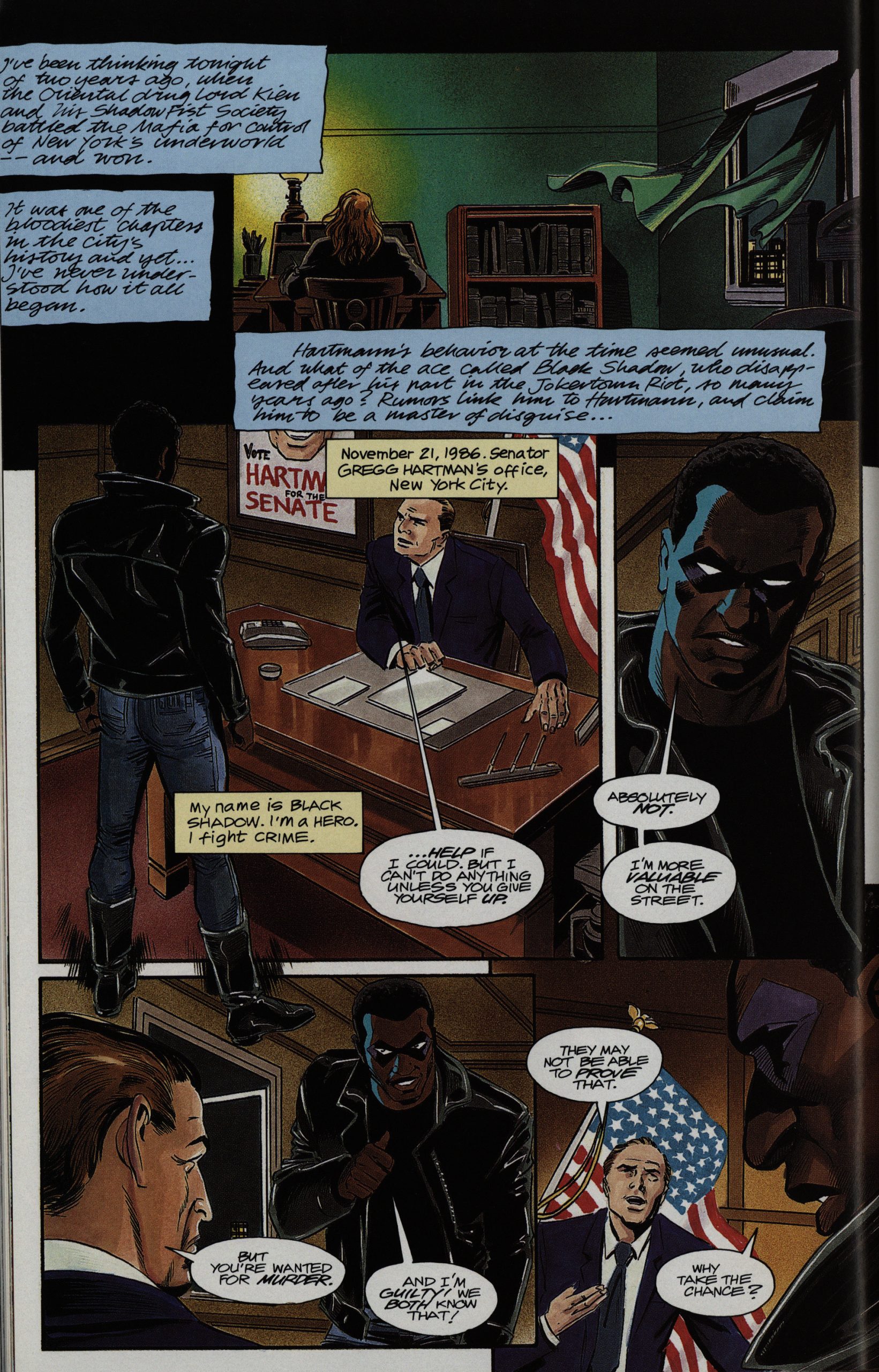 Oh, sorry — I said that that Stalkers story was the only thing to run in all four issues? That’s wrong. If only there was some way to go up a couple pages to edit out that, but I find that I don’t have the stamina, because the Wild Cards story (or “story”) wiped me out. It was incoherent and boring as fuck. I had to bail after a couple if chapters, because it would have finished me off.

Oh, and I just wanted to call attention to the name of that super-hero.

That’s right; it’s a black super-hero and his name is “Black Shadow”. 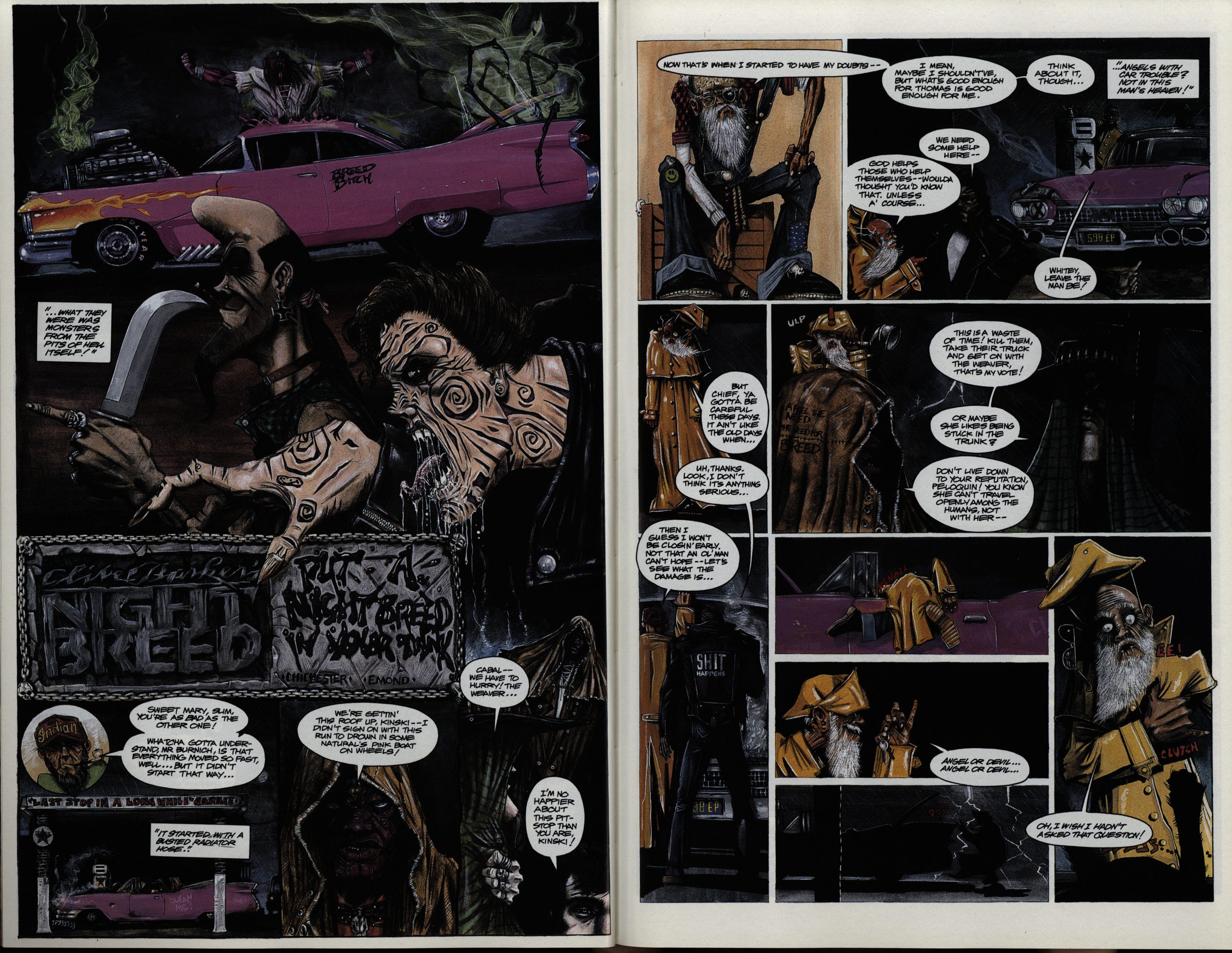 We mercifully get only one Nightbreed storylet, but the artwork Martin Edmons is pretty out there. I love it.

The story is pure piffle. 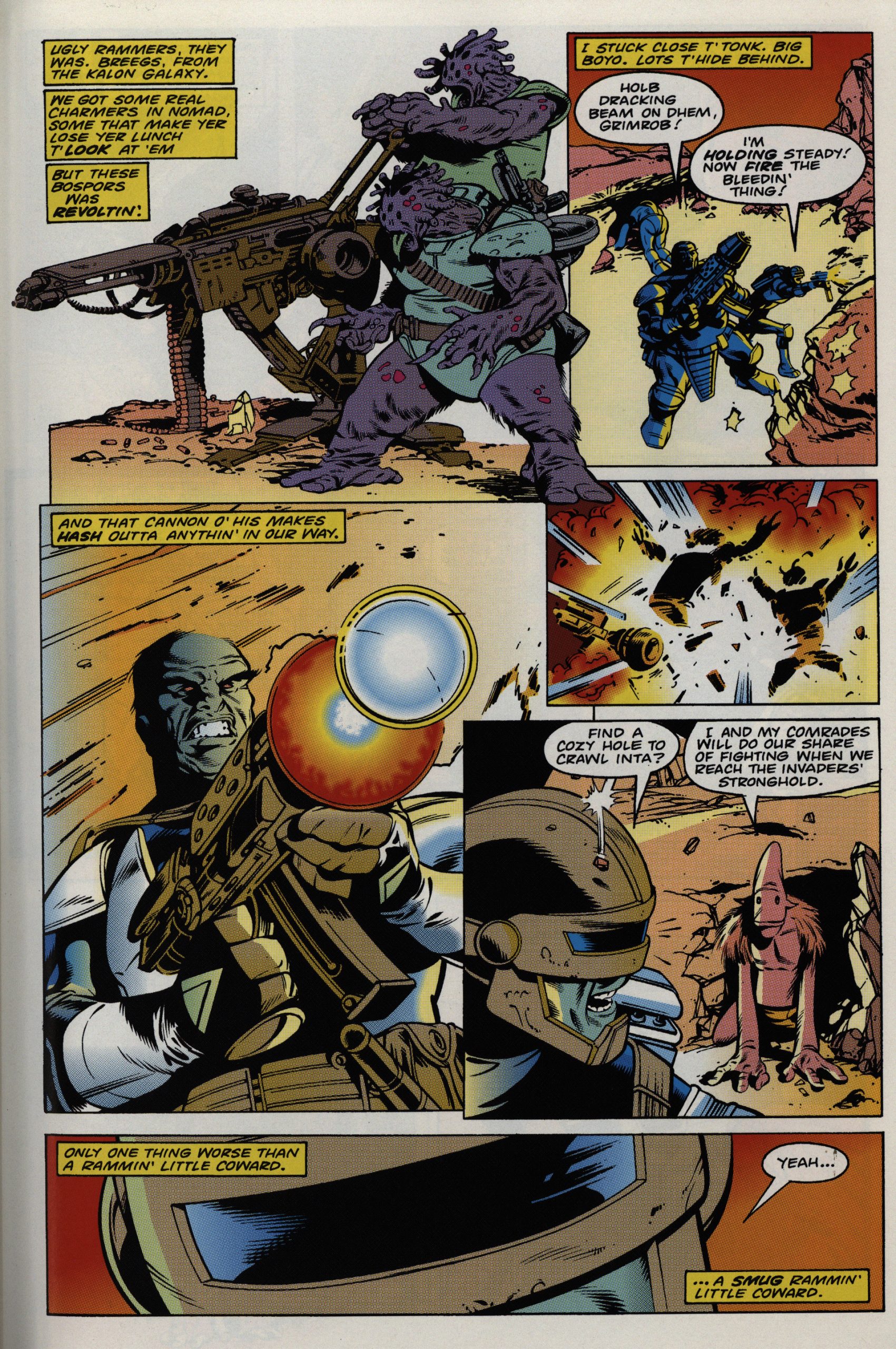 Alien Legion!? Why! Well, why not. It’s a solid, but not very exciting little thing written by Chuck Dixon. 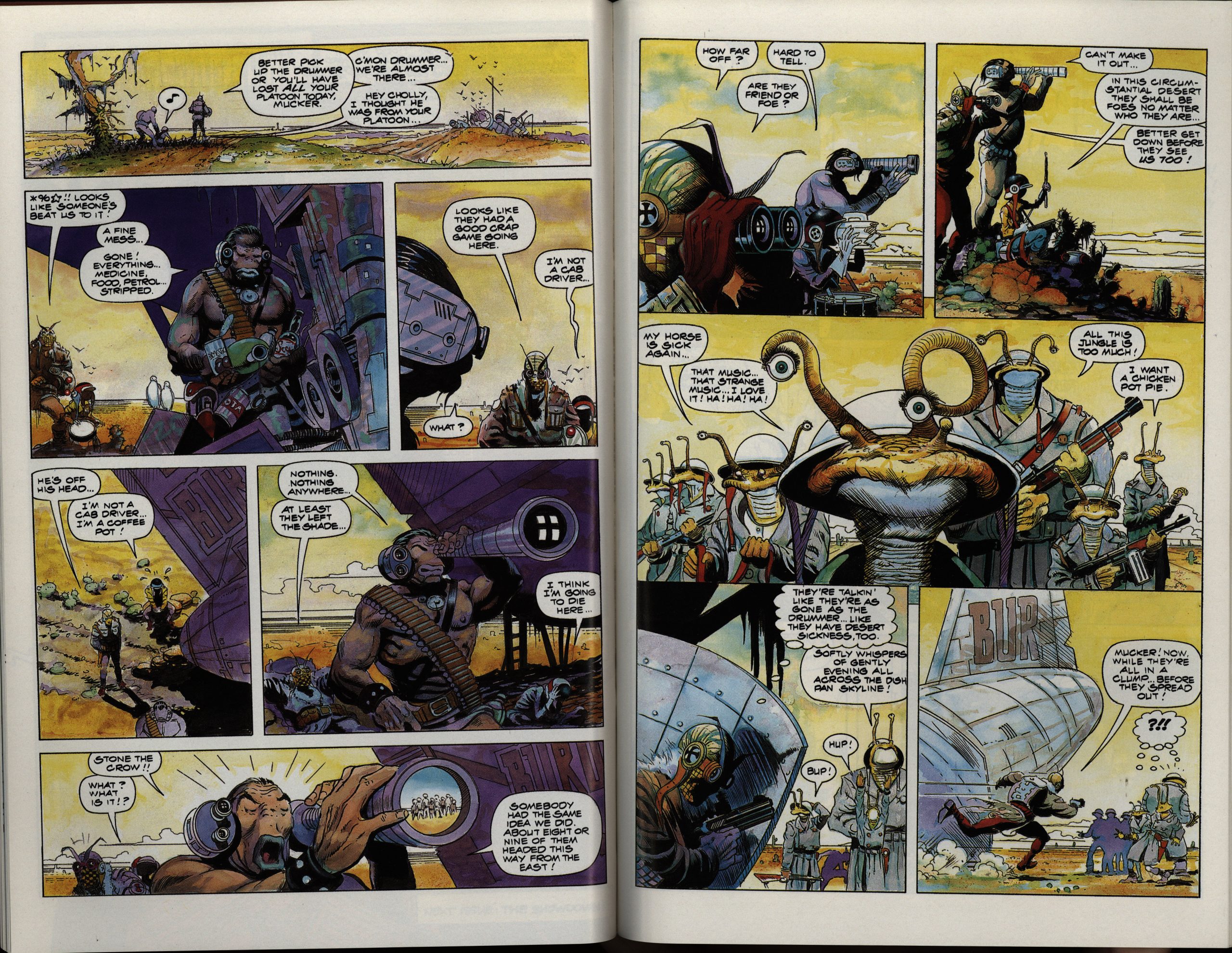 We get a Cholly and Fly-Trap two-parter with artwork by Arthur Suydam (who’s not British, I think?)… but written by Bob Burden! You know, the guy who did Flaming Carrot!

It’s just as insane as you are now imagining.

And it’s fun that they included a guy that was in the original Epic anthology. 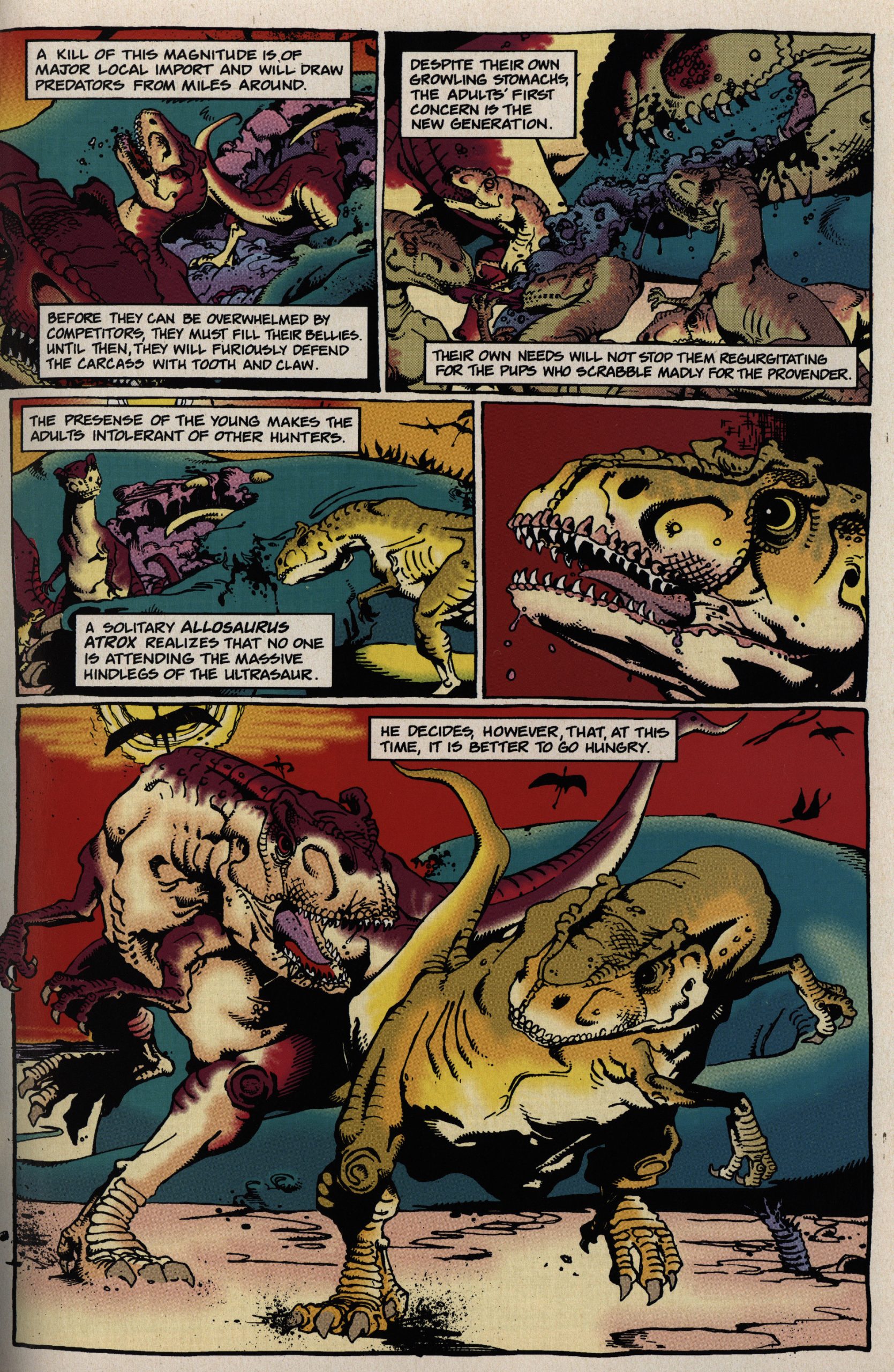 We get a Dinosaurs short — I haven’t come to the series these originate from yet (I think it’s later in 1992?), and now I’m dreading it. We all like dinosaurs, right, but the artwork here is pretty uninspiring: The animals don’t quite seem to fit together in any sensible way anatomically, and the angles are awkward, and it doesn’t read well. 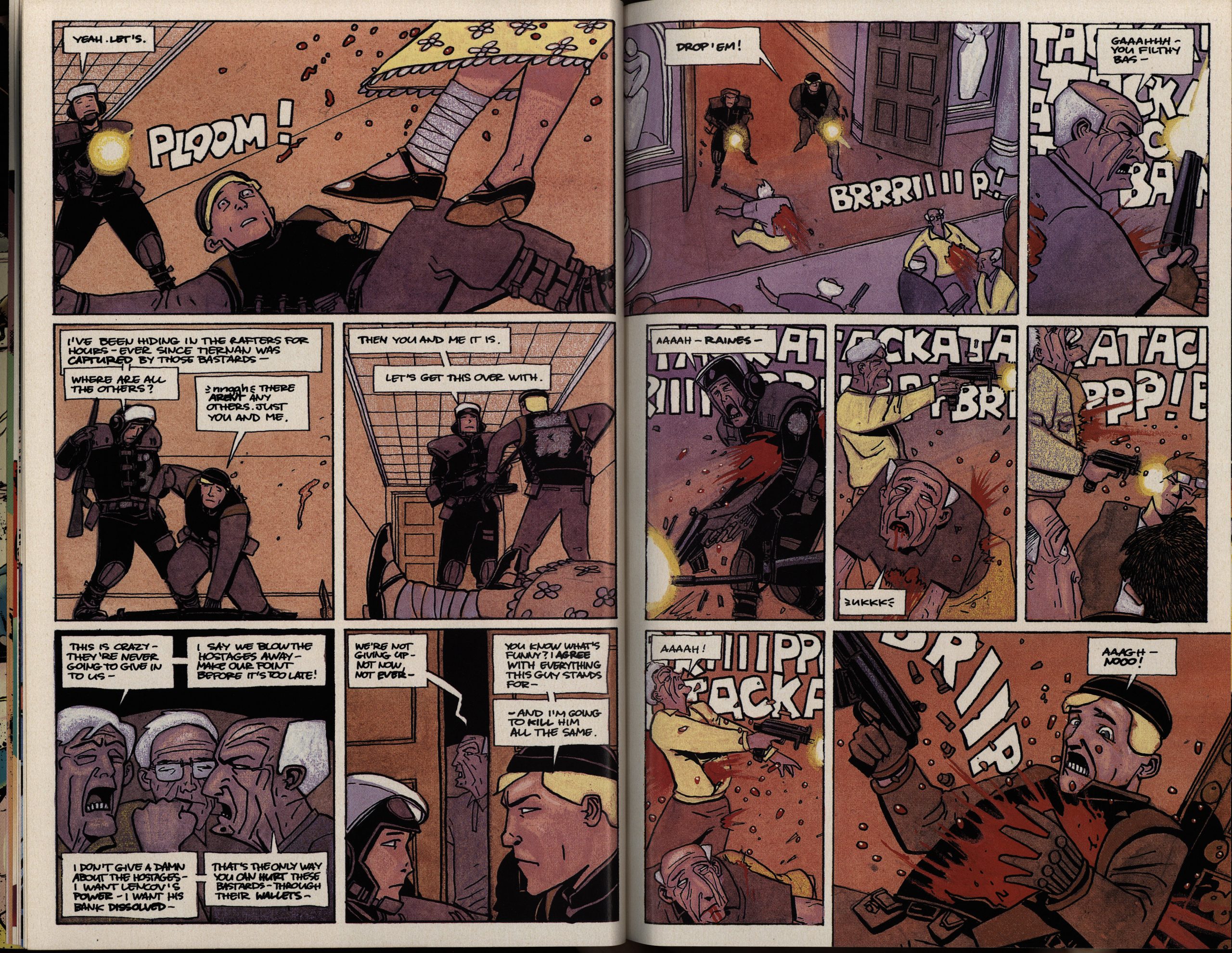 Oh, yeah, the Stalkers thing is still running, and I felt I just had to mention that the terrorists are those old people up there getting butchered.

As you can imagine, googling for this series is just about impossible. The name of the title is “Epic” and the series has Hellraiser and Nightbreed and…

Well, I gave it a shot, and I found that you can get the entire series in VF/NM condition for $13, which is quite a depreciation (it was published in 1992 for $20). Well, OK, and then you have to add postage.

But I’m guessing this wasn’t particularly successful commercially, either.