Captain Confederacy (1991) #1-4
by Will Shetterly and Vince Stone

I read this as a teenager in its original, self-published incarnation. I had a thing where I’d sample at least one comic from every new publisher that popped up… until the black and white explosion happened, and I had to stop, because that was 90% crap. But I remember kinda liking Captain Confederacy? I think I dropped it at some point, though, because… Well, I don’t remember. 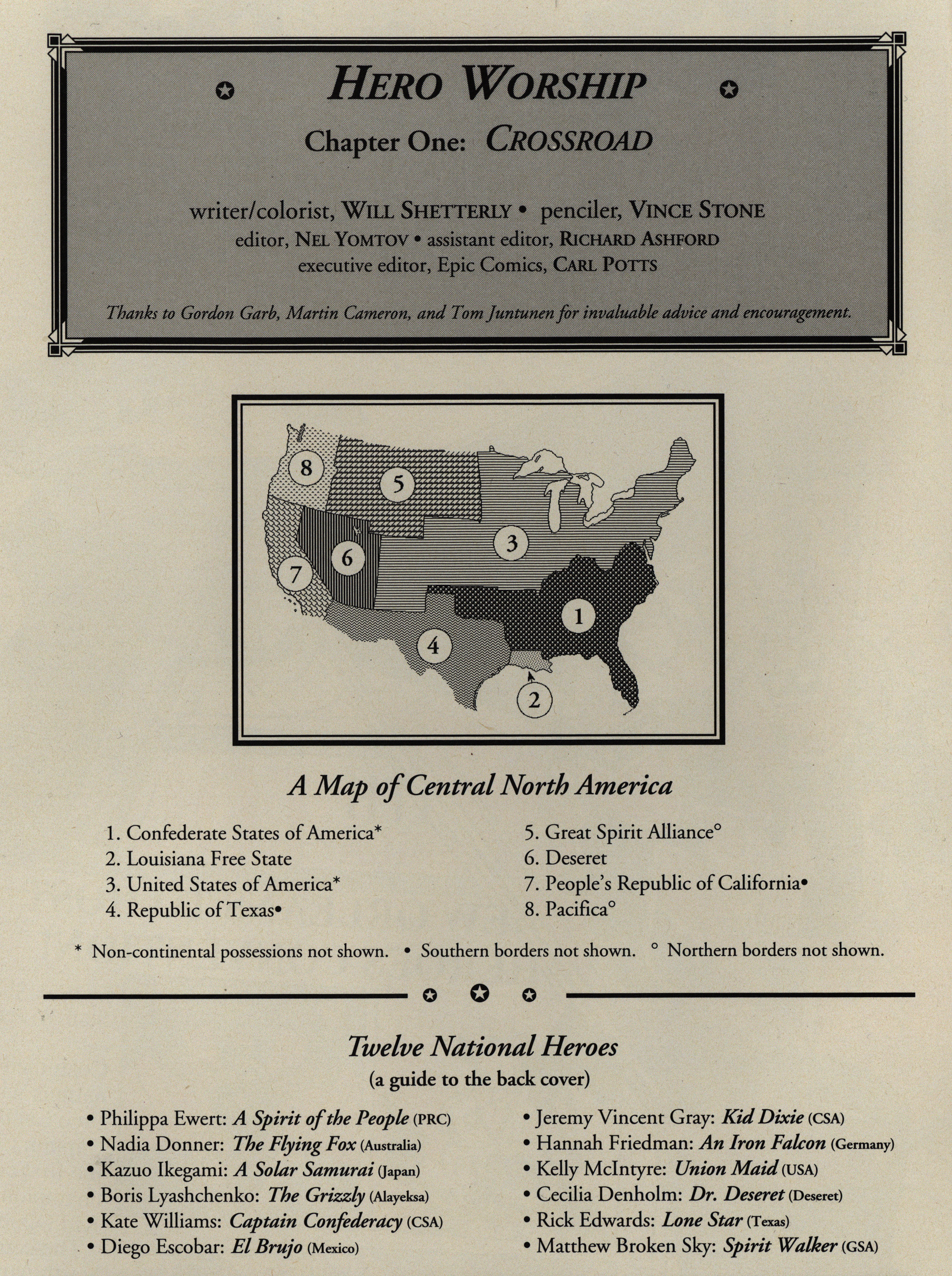 The title probably makes everybody think that this is some kind of right-wing loony tunes kind of comic, but it’s not: It’s an alternate history thing where the US isn’t a single nation, but is the quilt shown above. 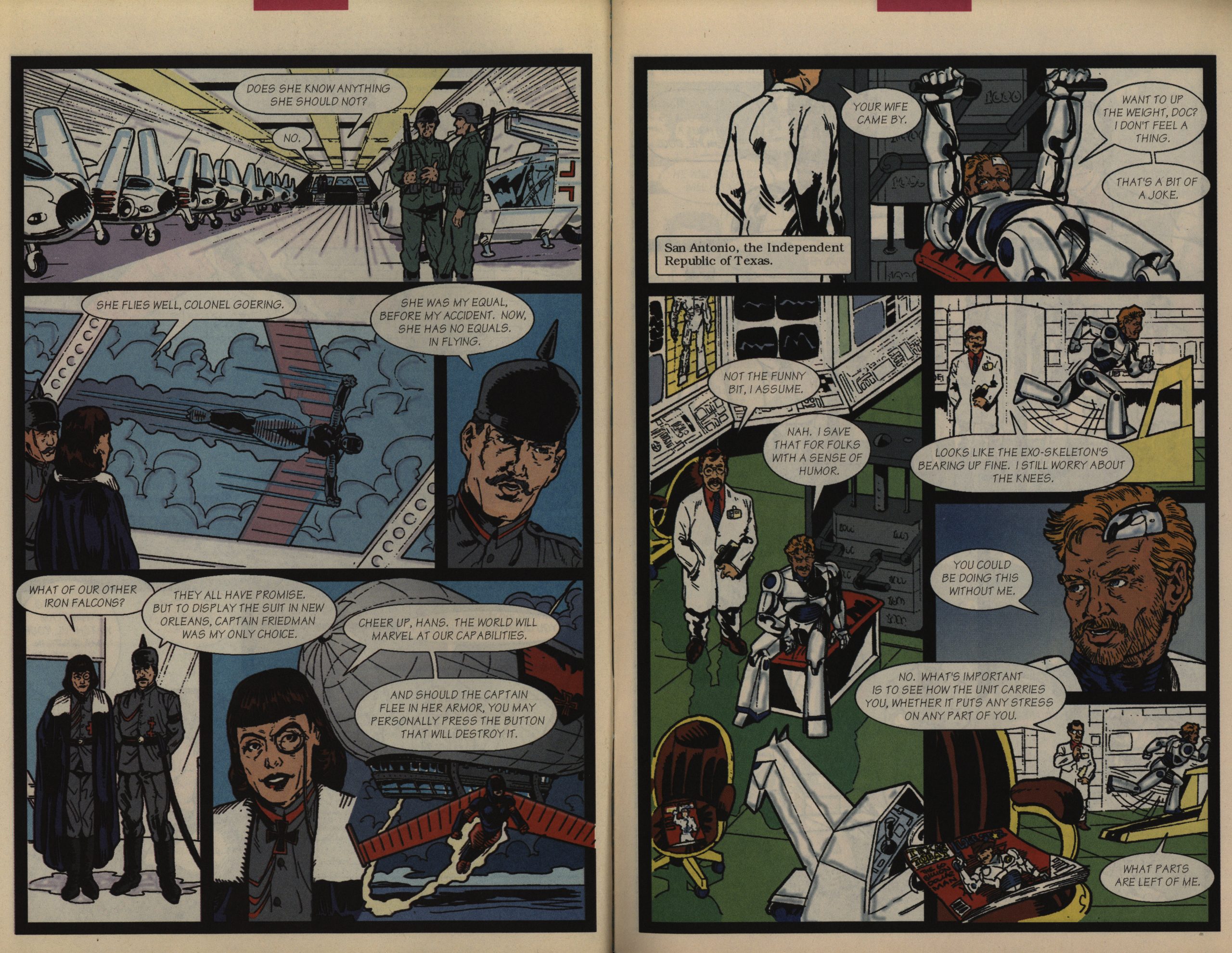 In the first issue, we’re introduced to all these non-Confederacy “heroes”, like this German fly girl and this Texan cyborg, but the book otherwise doesn’t really tell us much about the world the story takes place in, or, indeed, what’s Captain Confederacy’s story: It’s perfectly readable the way it is, but I’d guess that people who read the original series will find it a lot easier than newer readers.

Stone’s artwork is quite readable, but the figures are pretty sloppy and amateurish: Is that doctor (in the lab coat) supposed to have legs that are one quarter of the length of his torso? 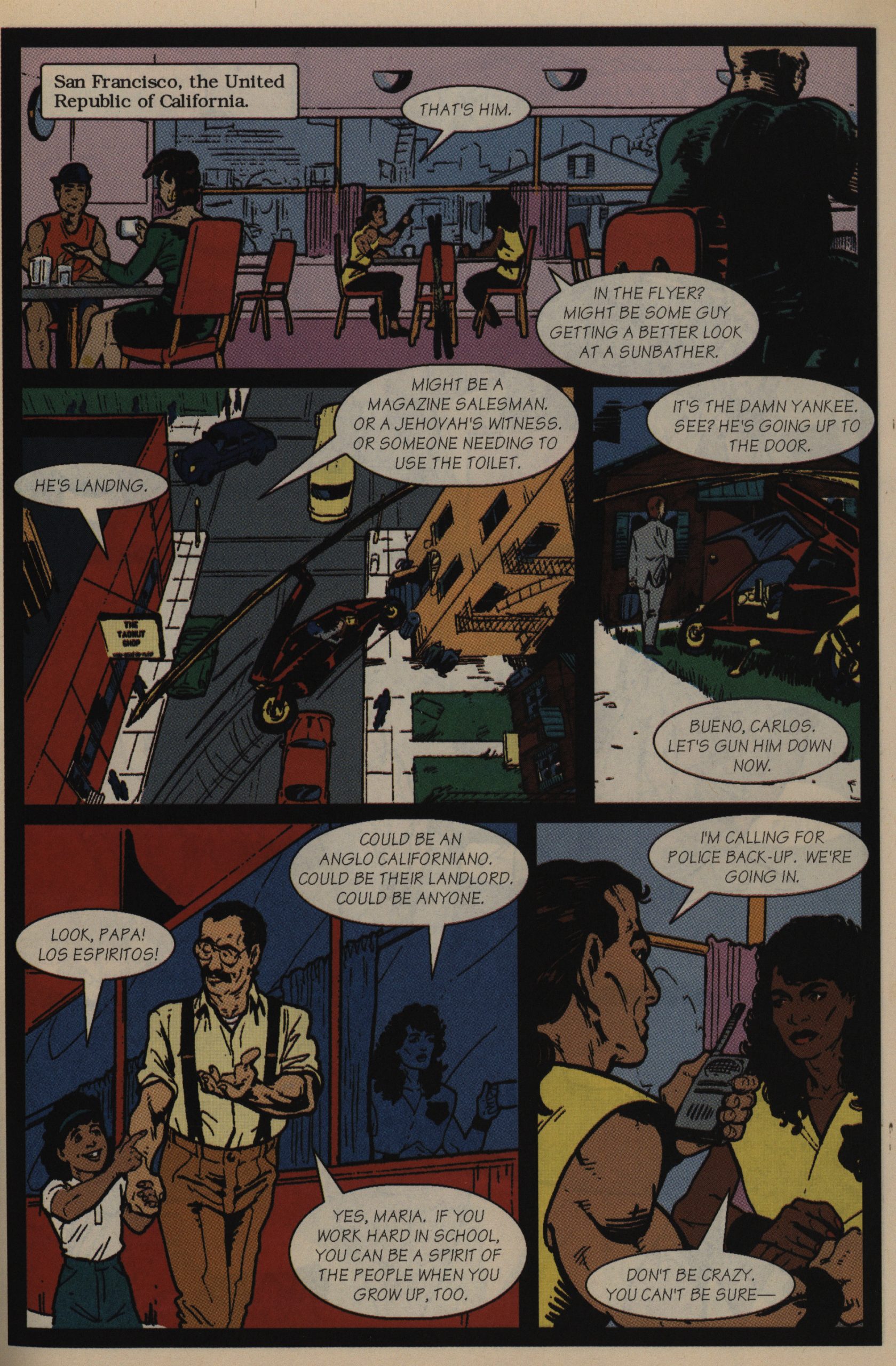 It’s also sometimes just hard telling what they’re trying to convey with all these shifts in perspective and dialogue with ambiguous sources. I think… probably not a lot; it’s just … sloppy. 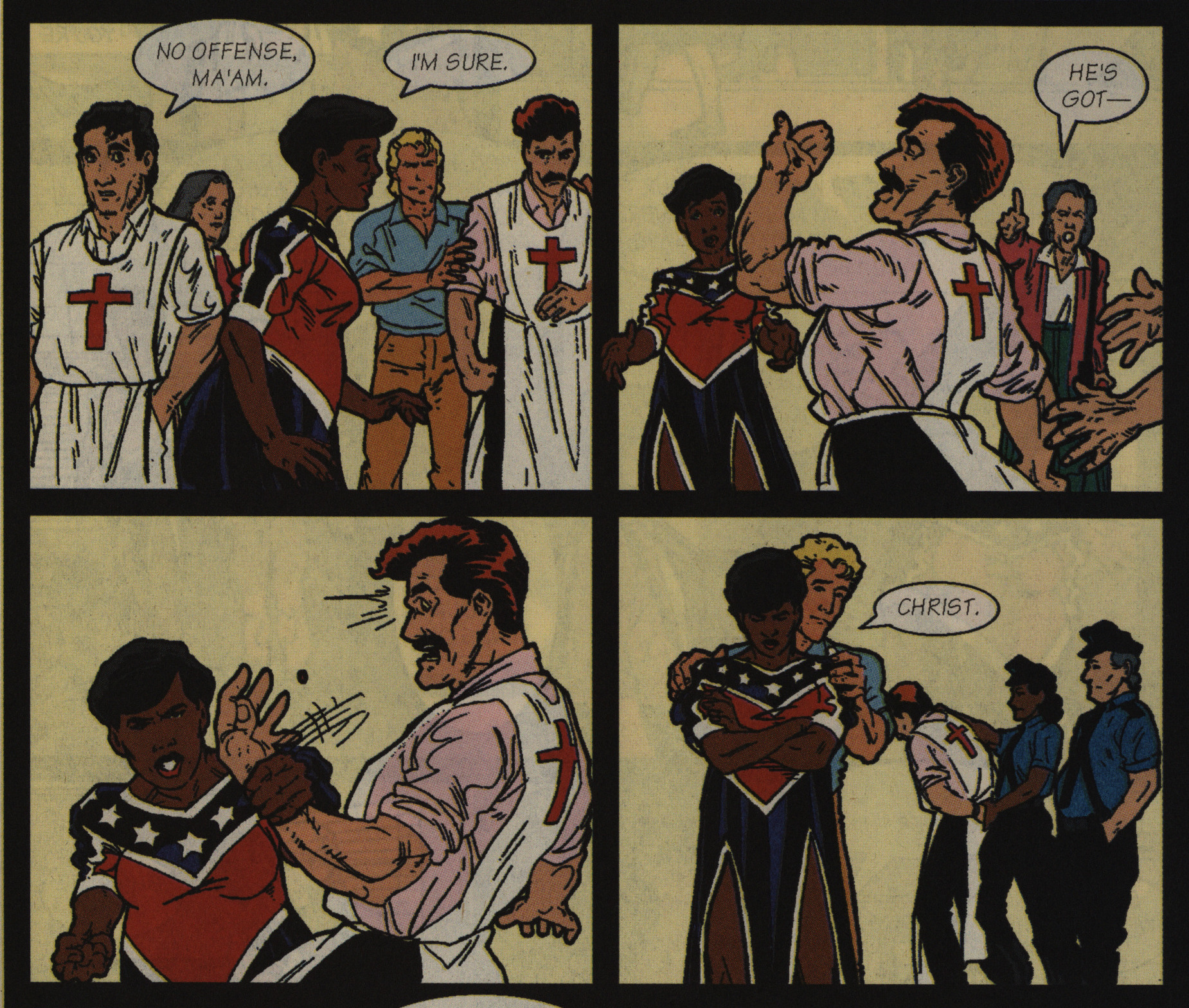 And… what’s going on here? Is the guy in the cross smock trying to take a pill? What’s that pill supposed to do? Give him super-hero abilities? Is it a suicide pill? Is it even a pill at all? What.

Oh, and Captain Confederacy is now a black woman, which makes a change from when I read the series as a teenager. 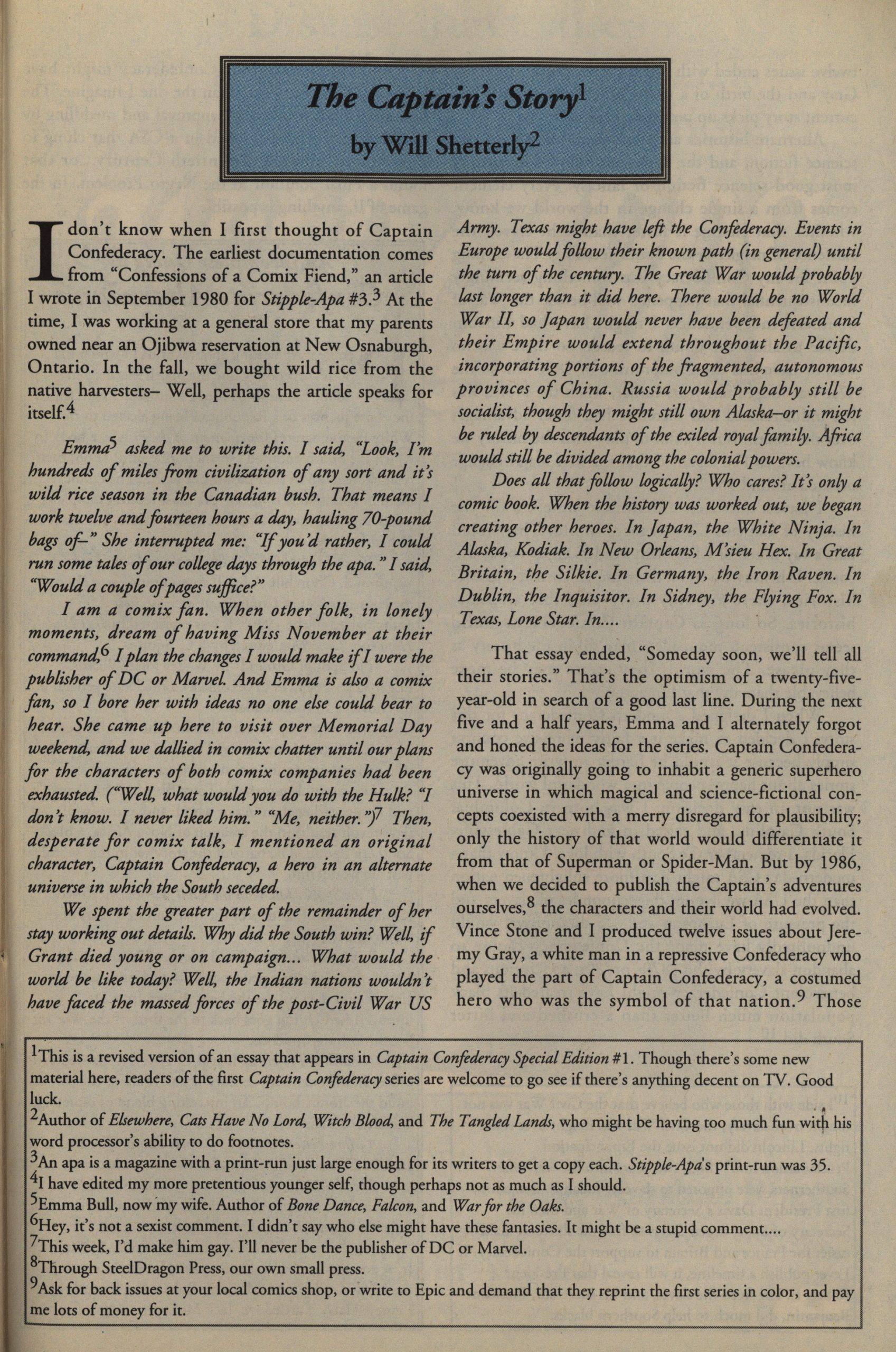 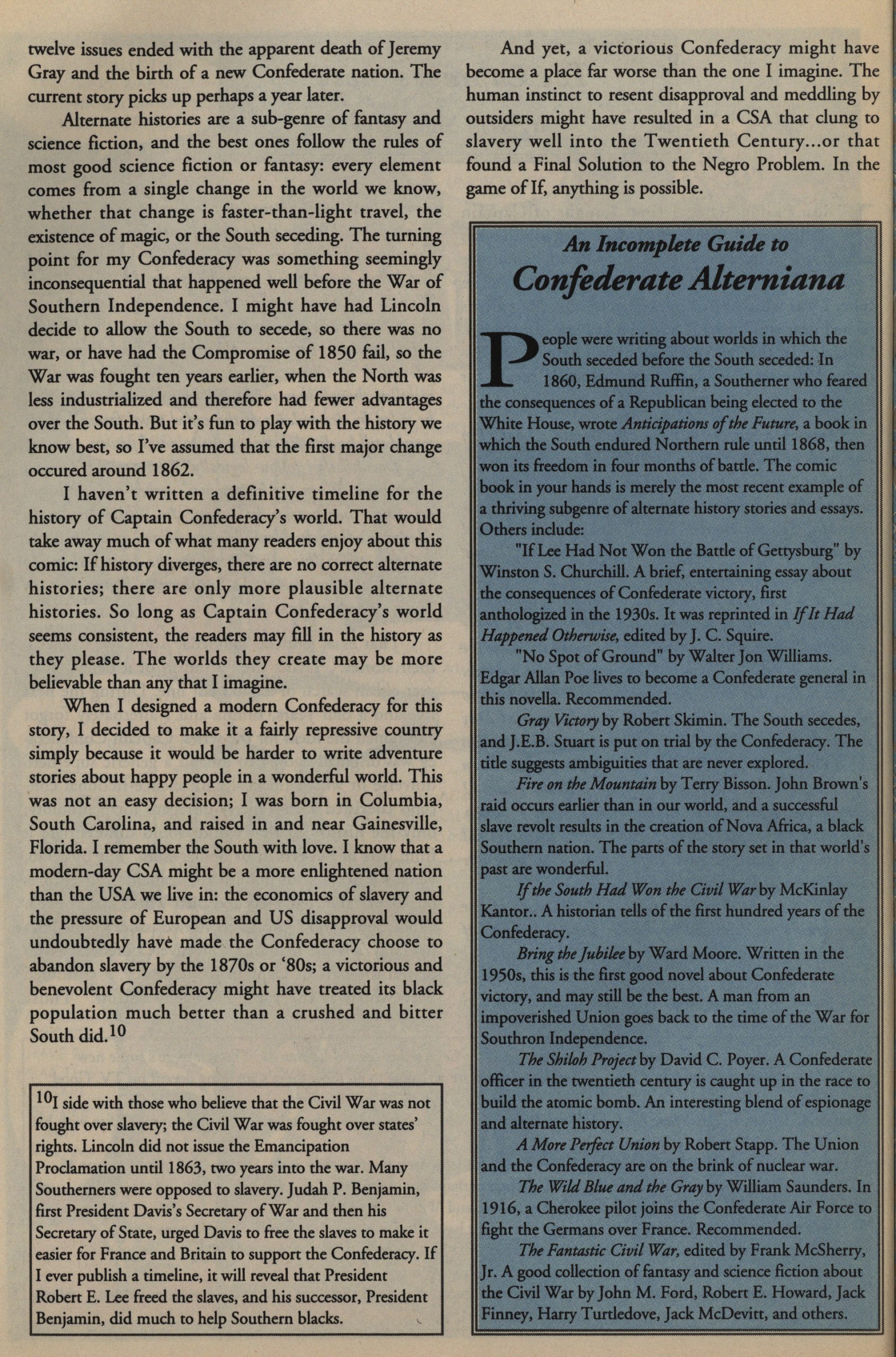 Ah, yes. I remember there being quite a lot of explorations into the timeline on the letters pages of the book… and that continues here. Shetterly also says that the Civil War was about states’ rights. 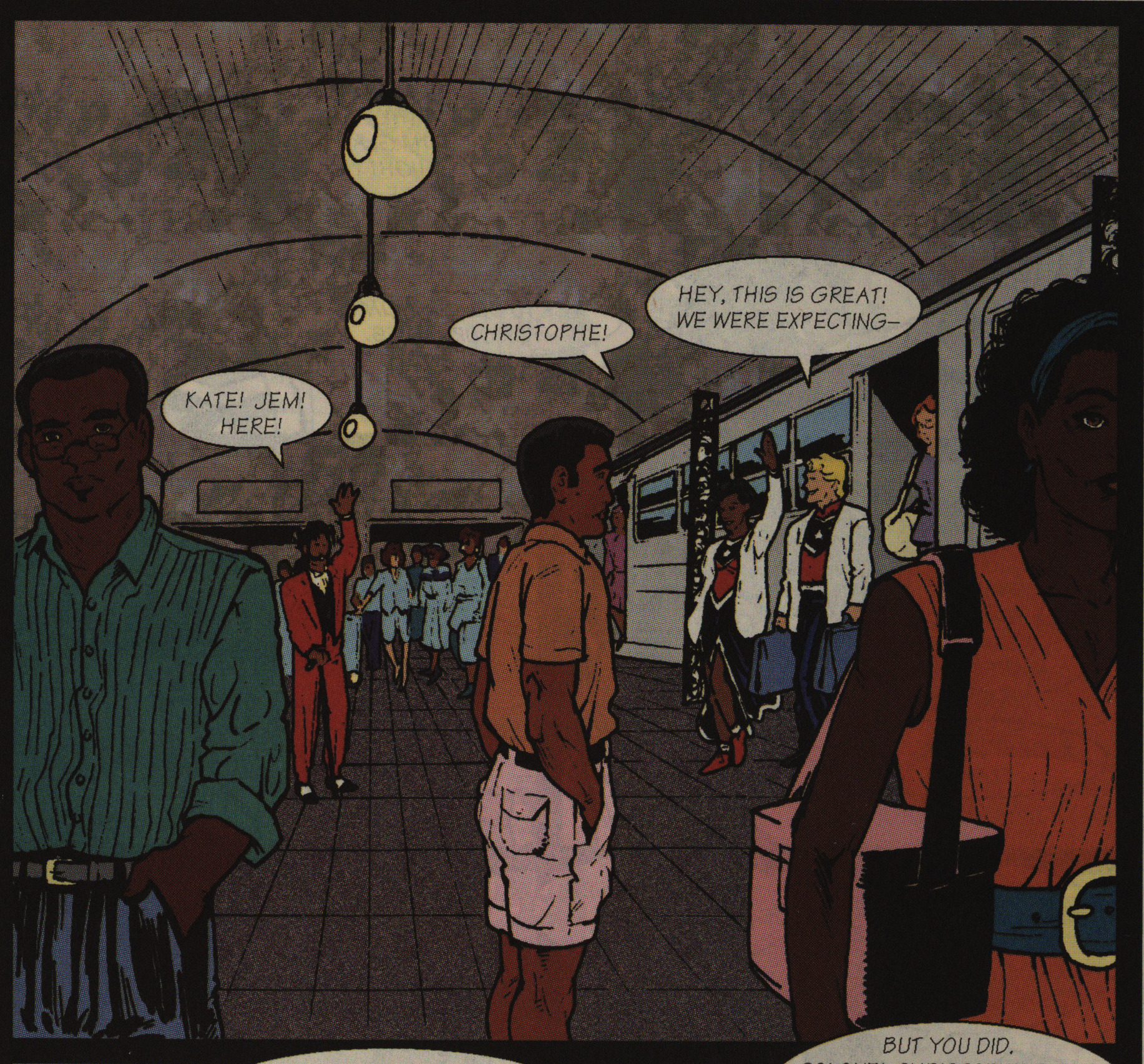 The colouring is pretty odd, I have to say. 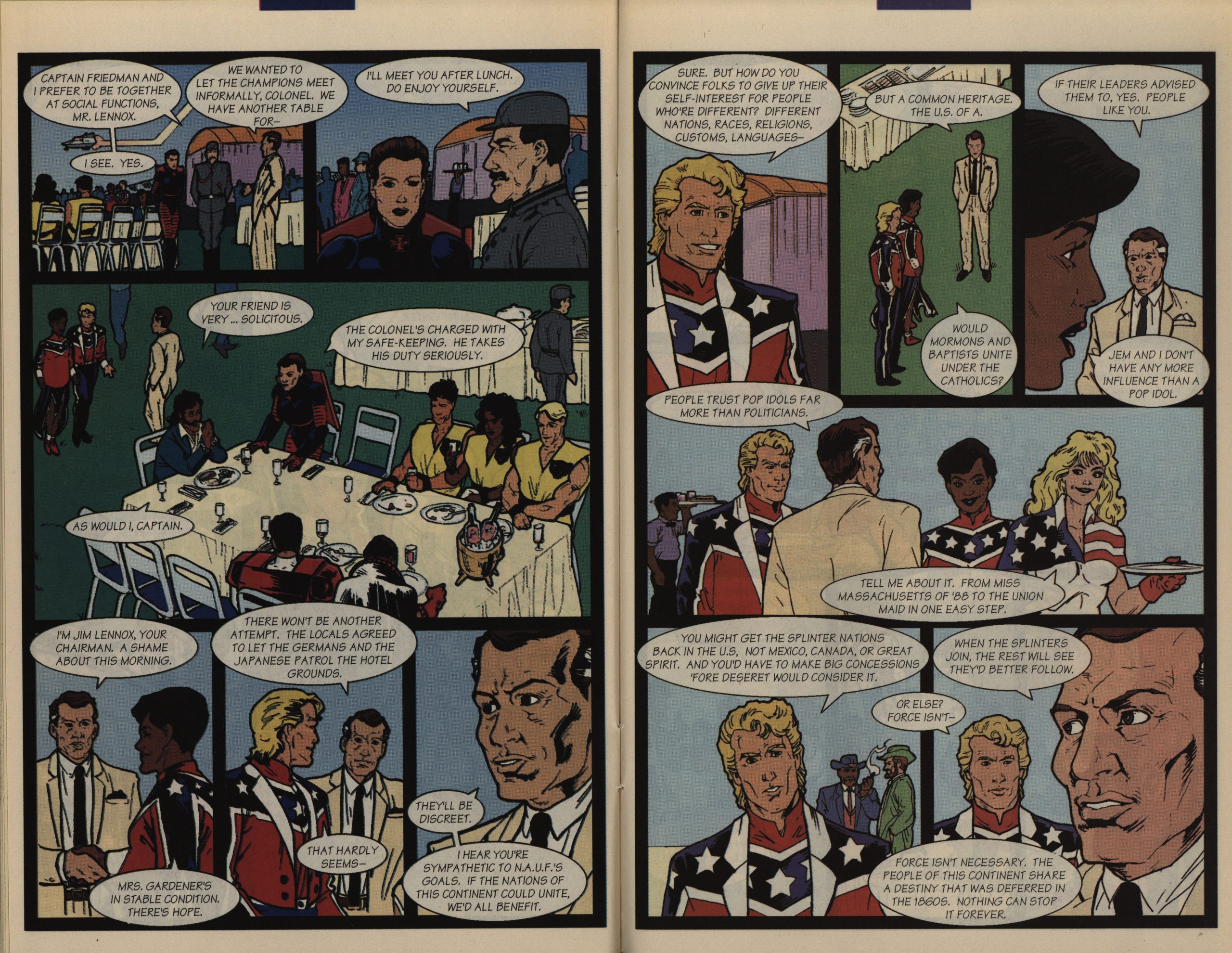 There’s little action over the four issues. It’s mostly these people standing around, talking to each other about … stuff. The plot is about a … conference for … heroes from different countries that’s… supposed… to achieve something.

It’s not the most thrilling of concepts. 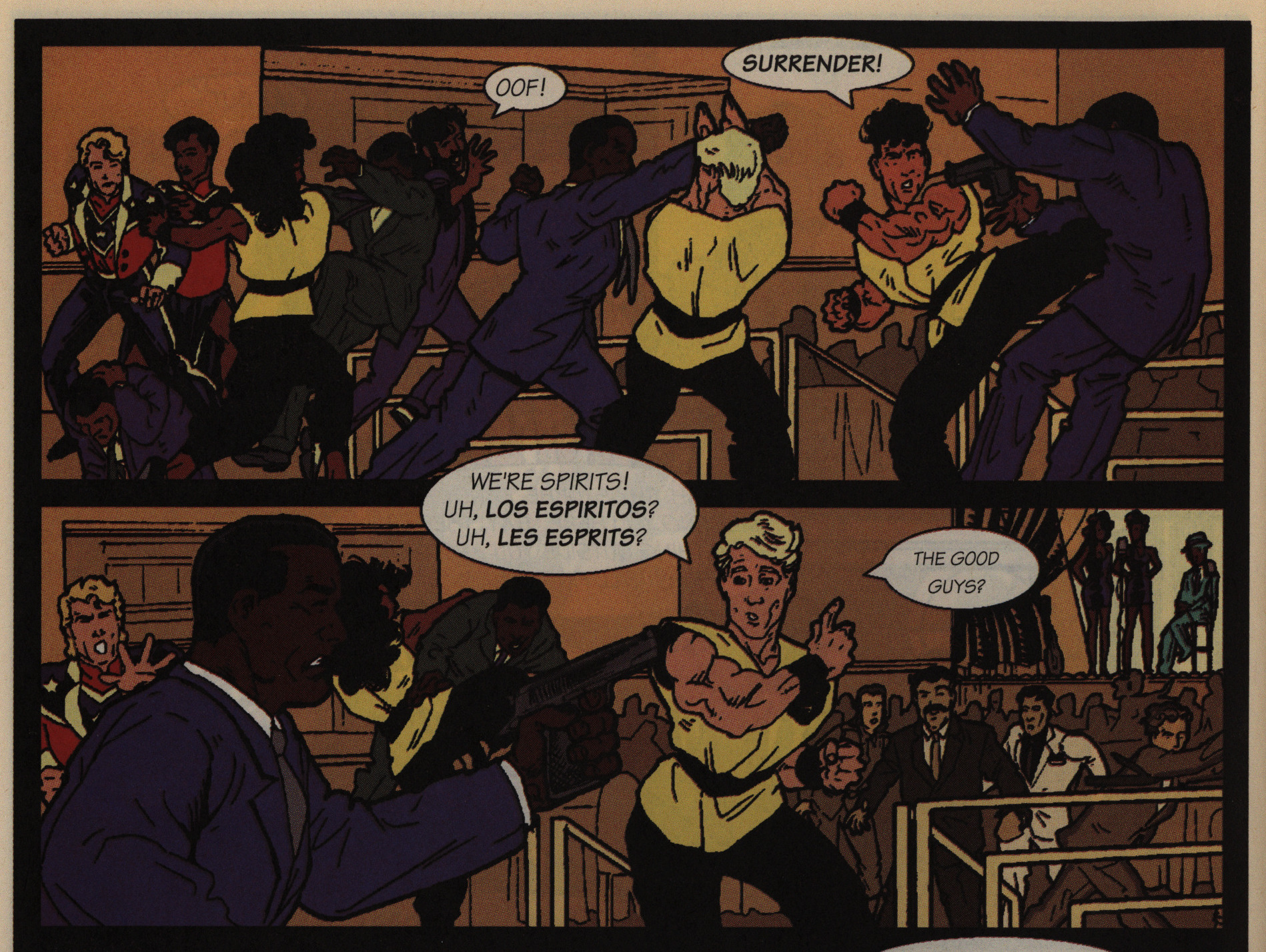 Stone is credited as “penciller”, and there’s no inker listed, which makes me wonder whether the artwork is somehow enhanced on a computer. It does look pretty lo-res?

And, oh, that’s some muscles on that guy… Perhaps he’s supposed to be horribly deformed? 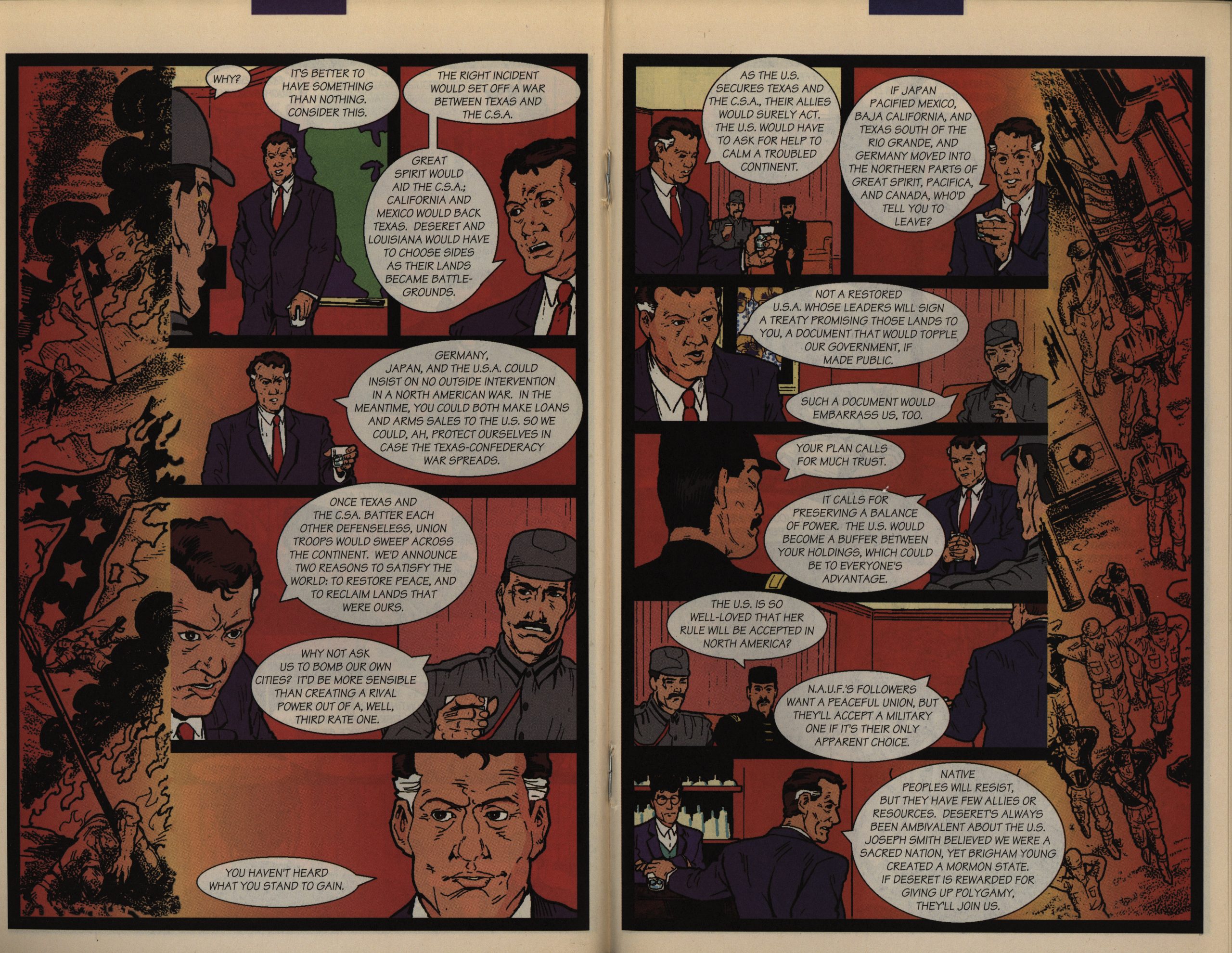 And then (spoilers!) it turns out that it’s all a plot to re-unite the US and manifest destiny etc. Nefarious!

I get the feeling that Shetterly isn’t much interested in telling a story (because there isn’t much of a story here), but instead just think about possibilities for his universe. 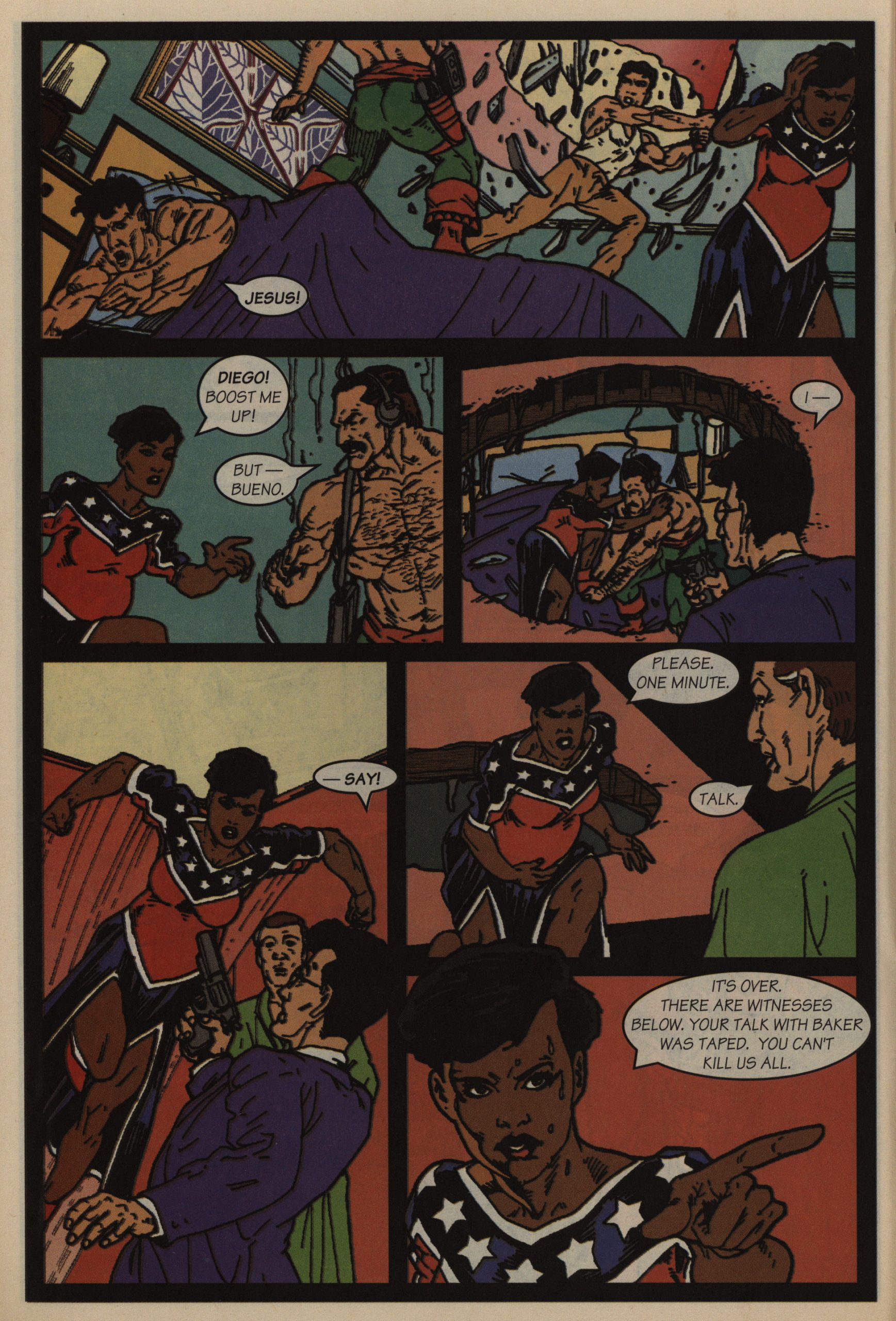 One thing that’s still unclear by the end of the series is whether Captain Confederacy has any super-powers. In the scene above, you see the guy with the magical sword cut a hole in the ceiling (and, yes, that’s is totally what it would look like if you cut a hole between two floors of a high-rise hotel; totally), and then the other guy throws her up, and … that’s the end of the exertion, really. Is she, like, a gymnast? 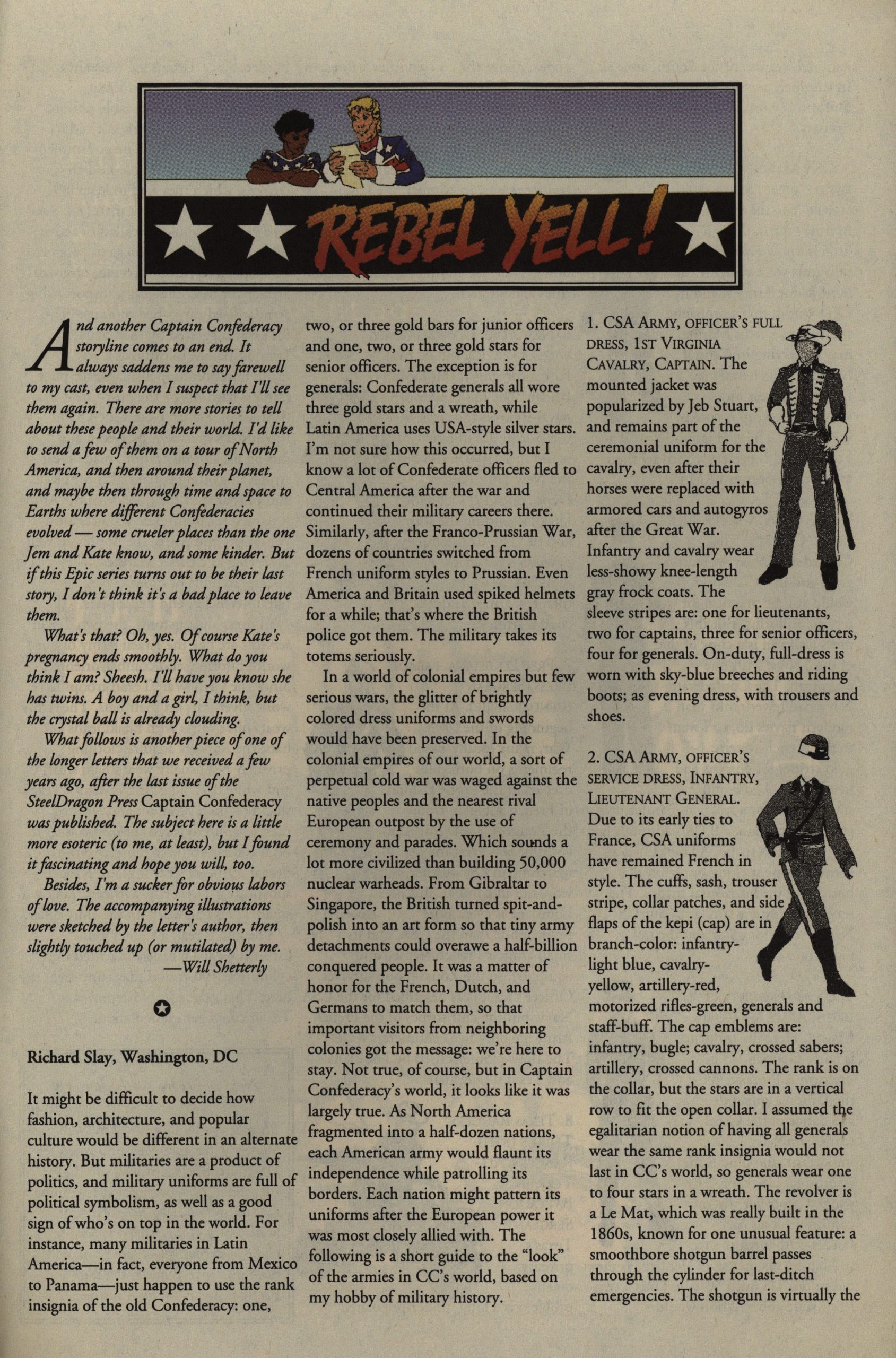 Shetterly announces that Captain Confederacy may continue, or it may not. And a fan writes about possible uniforms for the universe.

This series has never been collected or reprinted, but you can apparently read bits of it online? And here’s Shetterly’s blog.

As you can imagine, it’s a bit controversial:

“I’m trying to follow the gist of this comic book,” Boswell said. “It seems to be a racial thing throughout. I really found it offensive.” Both Joey and Boswell are white. Boswell said the book’s content also offended her other foster child, who is Black.

Uhm… that’s… some introduction to an interview:

When we interviewed one of Captain Confederacy’s creators, writer, Will Shetterly, we had nothing but partial information on this comic book series. So it wasn’t clear for us whether the series really was written from a racist point of view, or if it was a denunciation of this attitude. Thus, we tried to ask questions which would allow Shetterly to present his case fairly, whether he was a racist or not.

How do you feel about having created this series back then, today?

We had some minor frustrations. We were one of the first to experiment with computer production of comics. The colors of the Epic series are too bright, and the lettering is terrible. That’s the price of being an early adopter of new technology.

But I see that they didn’t actually ask him. I’m pretty sure the answer is “no”, but:

Shetterly popularized the term “social justice warriors”[6] in 2009 in his blog “Social Justice Warriors: Do Not Engage”, by contrasting them with “social justice workers”, the former being more extreme people who “rage, mob and dox in the belief that promoting identitarianism [I.e., identity politics] will make a better world.”.

I wasn’t able to find any reviews of the Epic series.

One thought on “1991: Captain Confederacy”