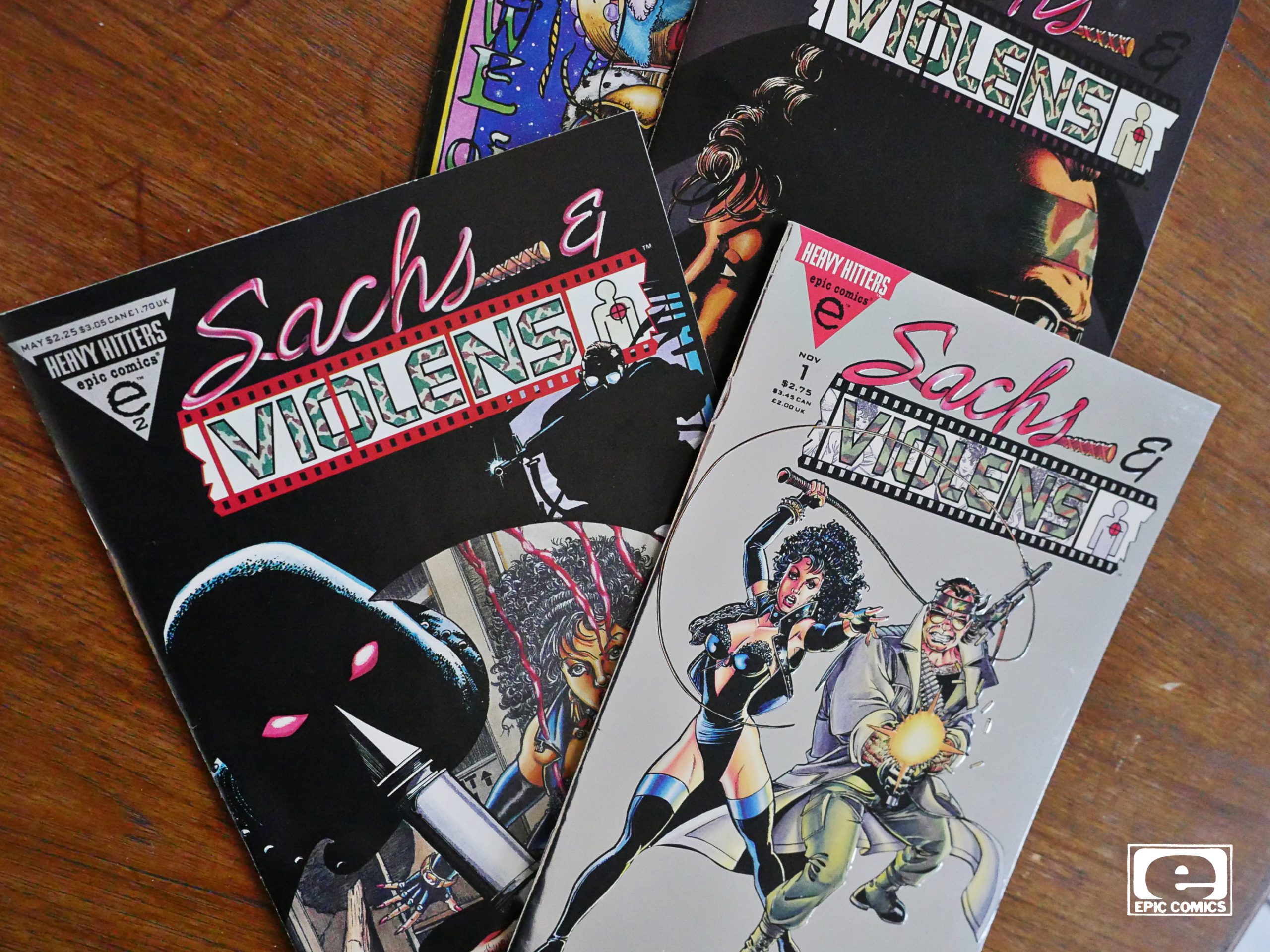 The first issue has a foiled and embossed cover (as usual with the Heavy Hitters mini-series), but it’s probably the one that uses the metallic ink to best effect. Not because that it does anything interesting with it, but because the other covers were even less imaginative. 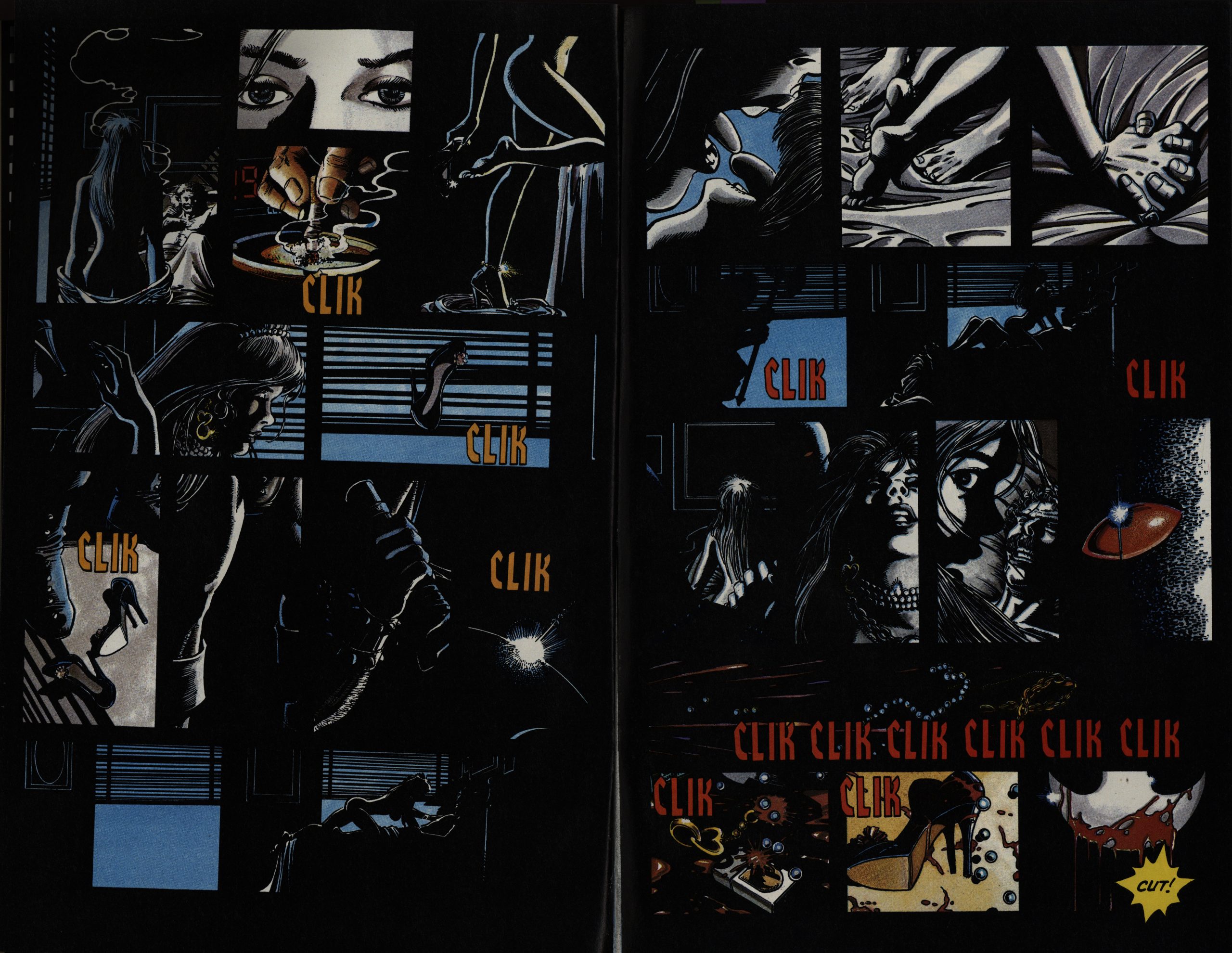 Well, pages two and three are certainly unusual for a Perez comic… 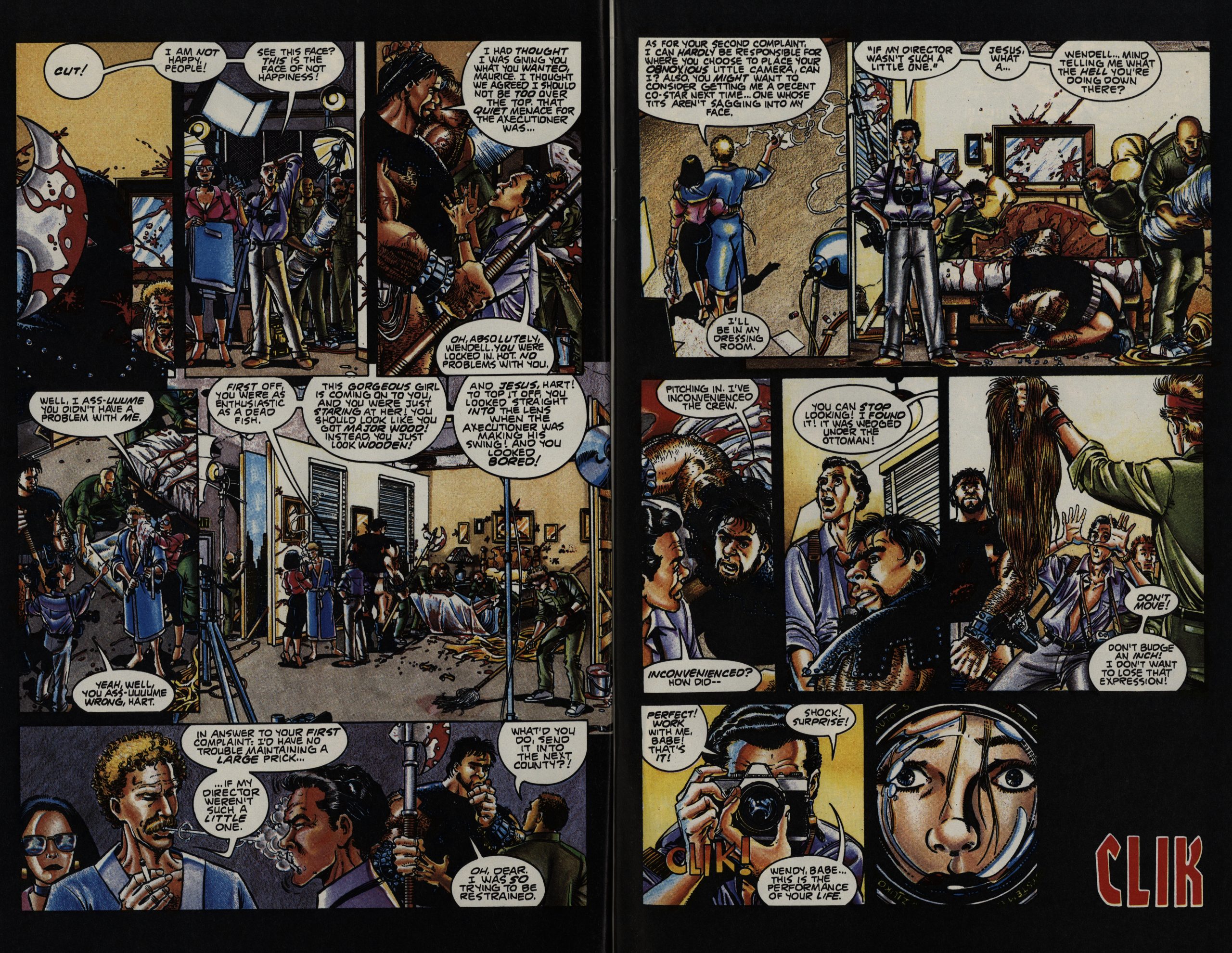 Eep! Then we get to page four and five, and we get to the normal “don’t know where to look” mess that Perez sometimes does well, but… not… here.

Is he using tone here? It’s hard to tell, because the colouring job doesn’t help at all — it just makes things even harder to read.

Which is why when I read this spread the first time, I didn’t quite notice that this series is about guys taking snuff pictures, and they’d just murdered a woman.

In one way, it’s an achievement making an opening that’s this distasteful (both in plotting and artwork), but it’s such a juveline “ooo, look how edgy we are!” move: The callousness of the killers here is so deep, man! So deep! Such a commentary on society today! Dude!

Damn autocorrect. I meant to write “this is shite”. Sorry. I should get that fixed. 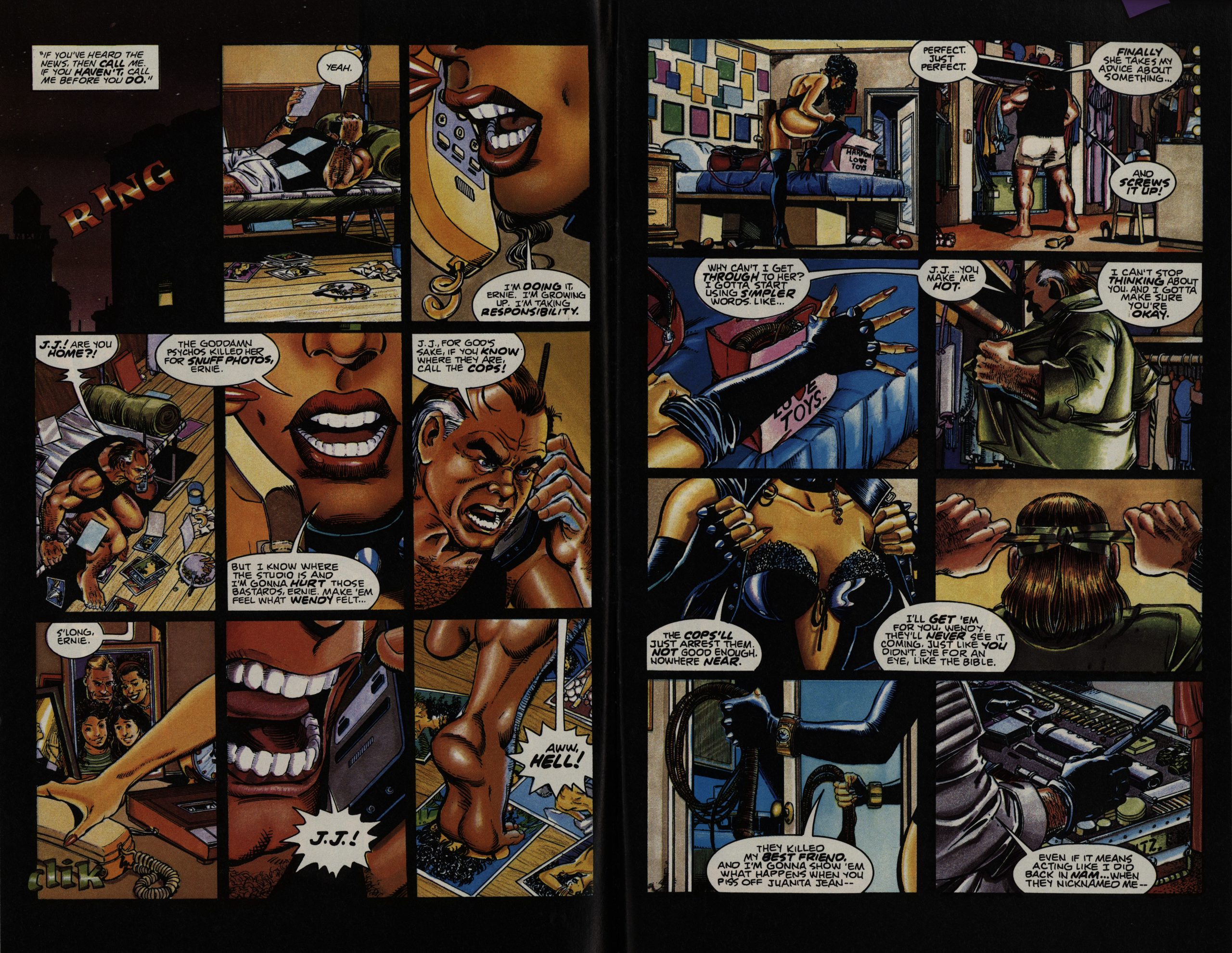 You can’t make these things up. I mean, Peter David did, and that he did is the “truth is stranger than fiction” thing here.

And her pornographer photographer friend is hot on her heels to help her. 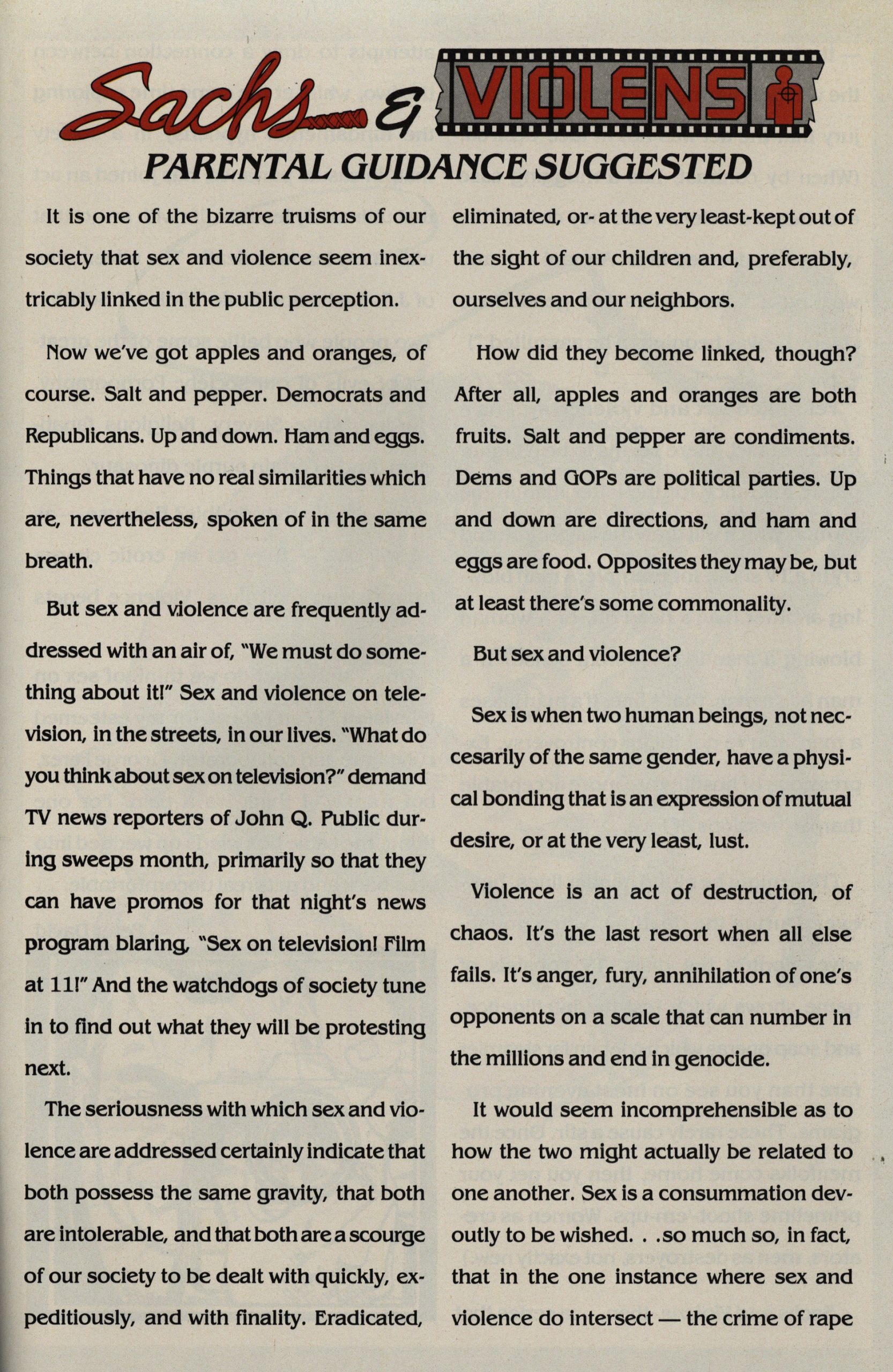 David explains how this is all deep and stuff. 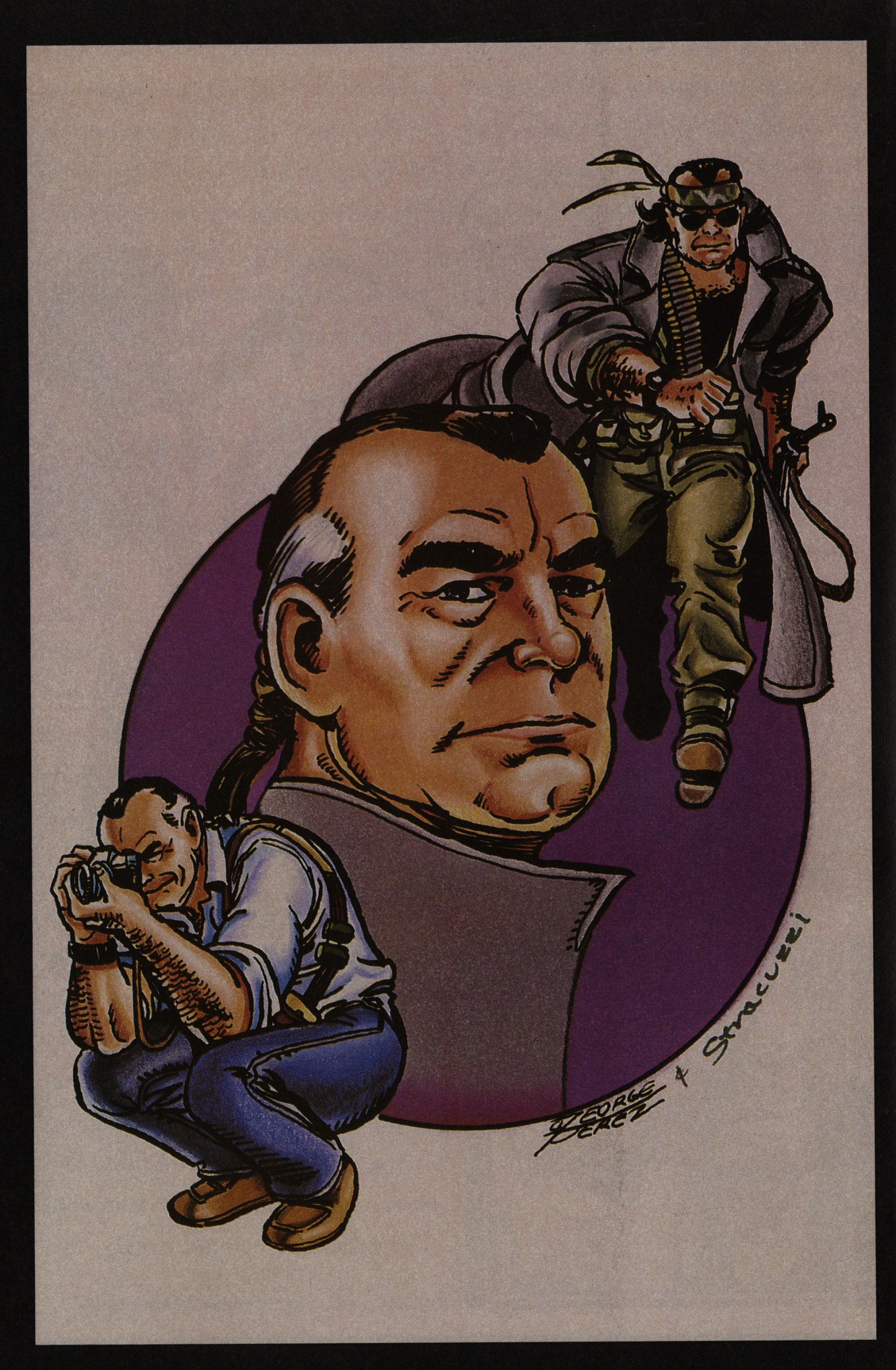 And we get some illustrations by Perez. 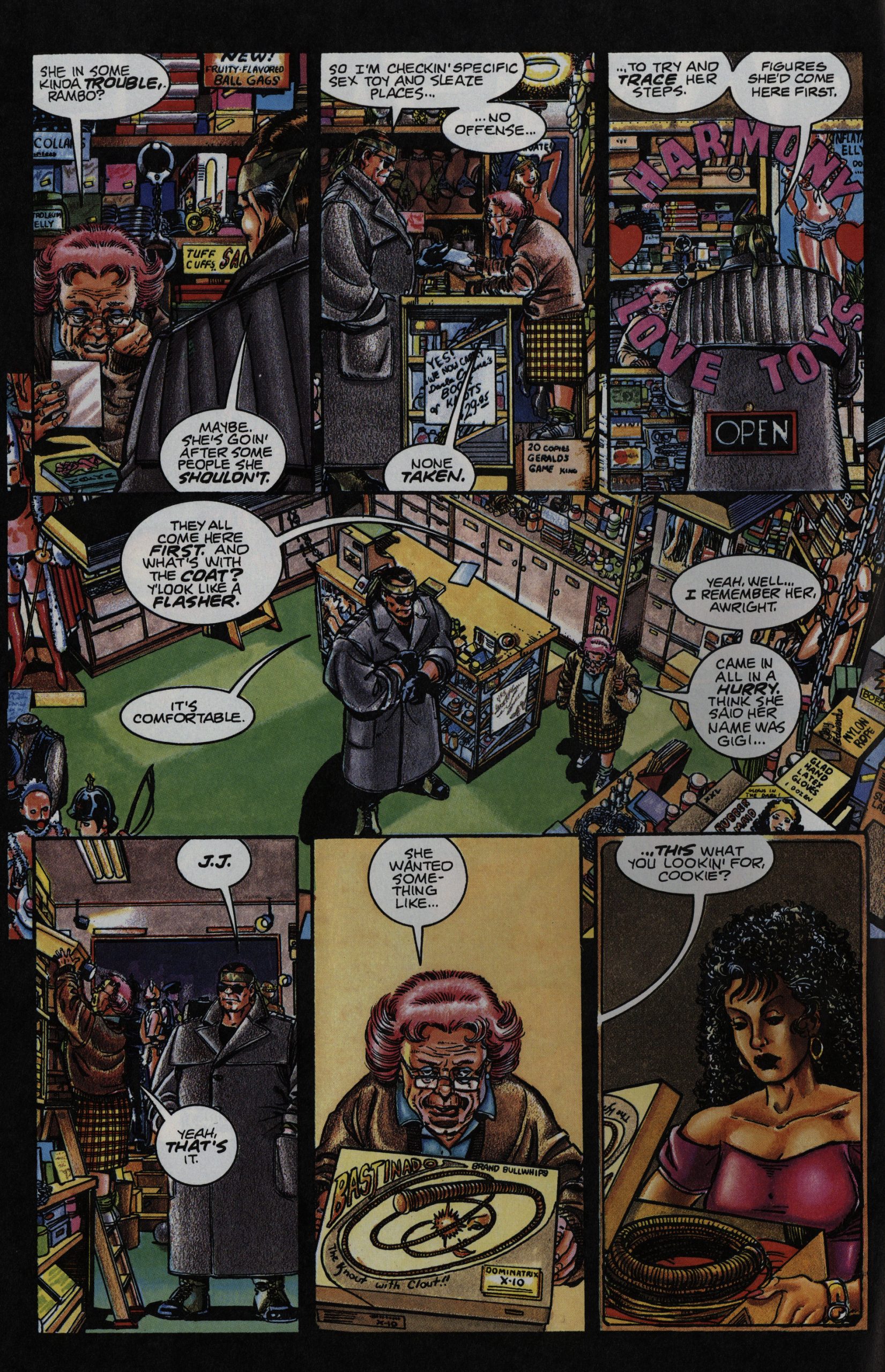 That’s the most cluttered page ever. 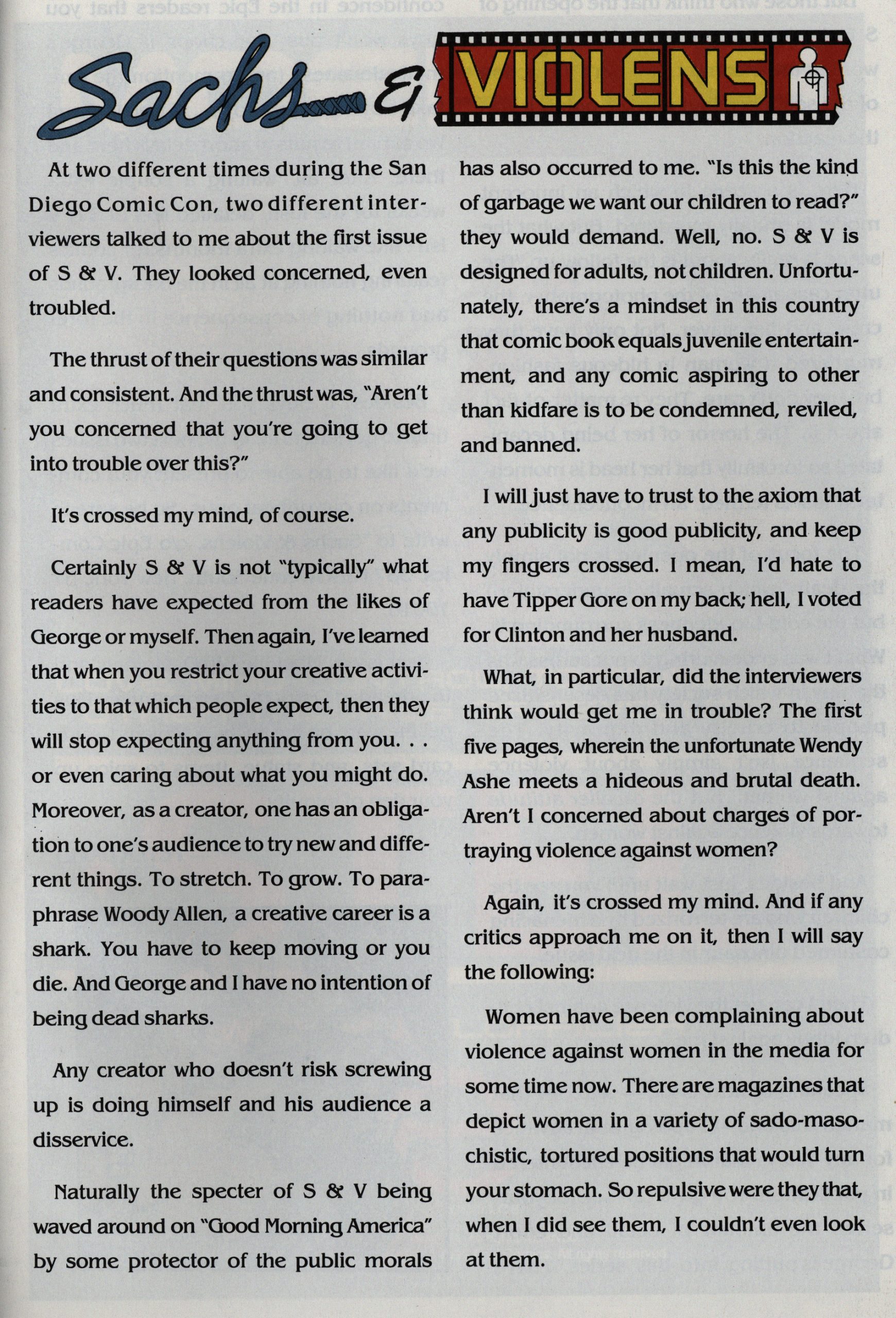 What? This is from the second issue, and David is talking about people being “concerned” about Sachs & Violens. Well, publishing schedules being what they are, I assumed that this was just David straight-up lying (it certainly reads that way) in that “many people as me about” way. But there was a six month pause between the first and second issues, so I guess it’s possible? But the San Diego Con happens in July? So I’m back to believing it was a lie. 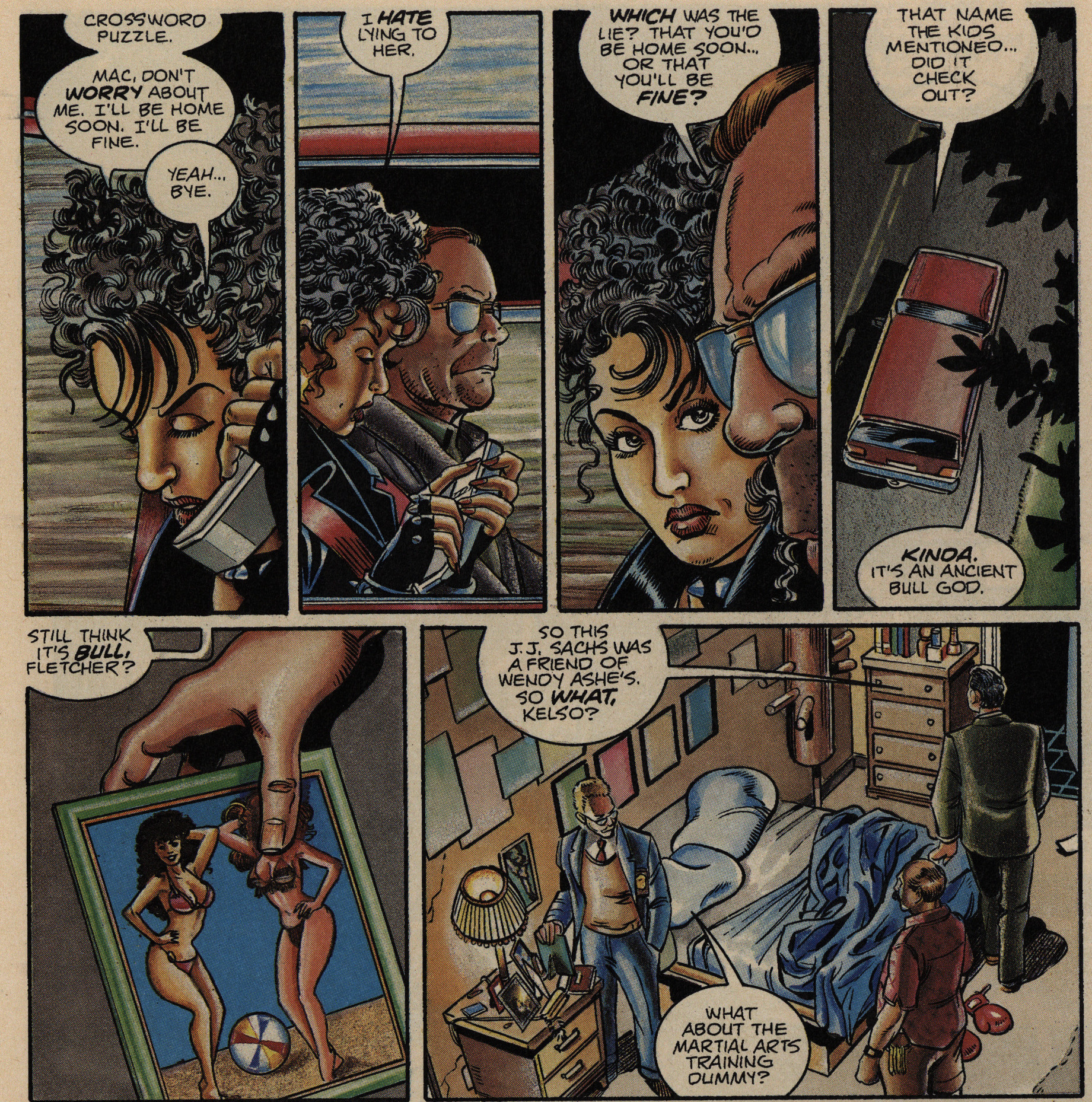 David tries to be all modern with an aspect-to-aspect scene change (the “bull” stuff), but it seems pretty lame here. 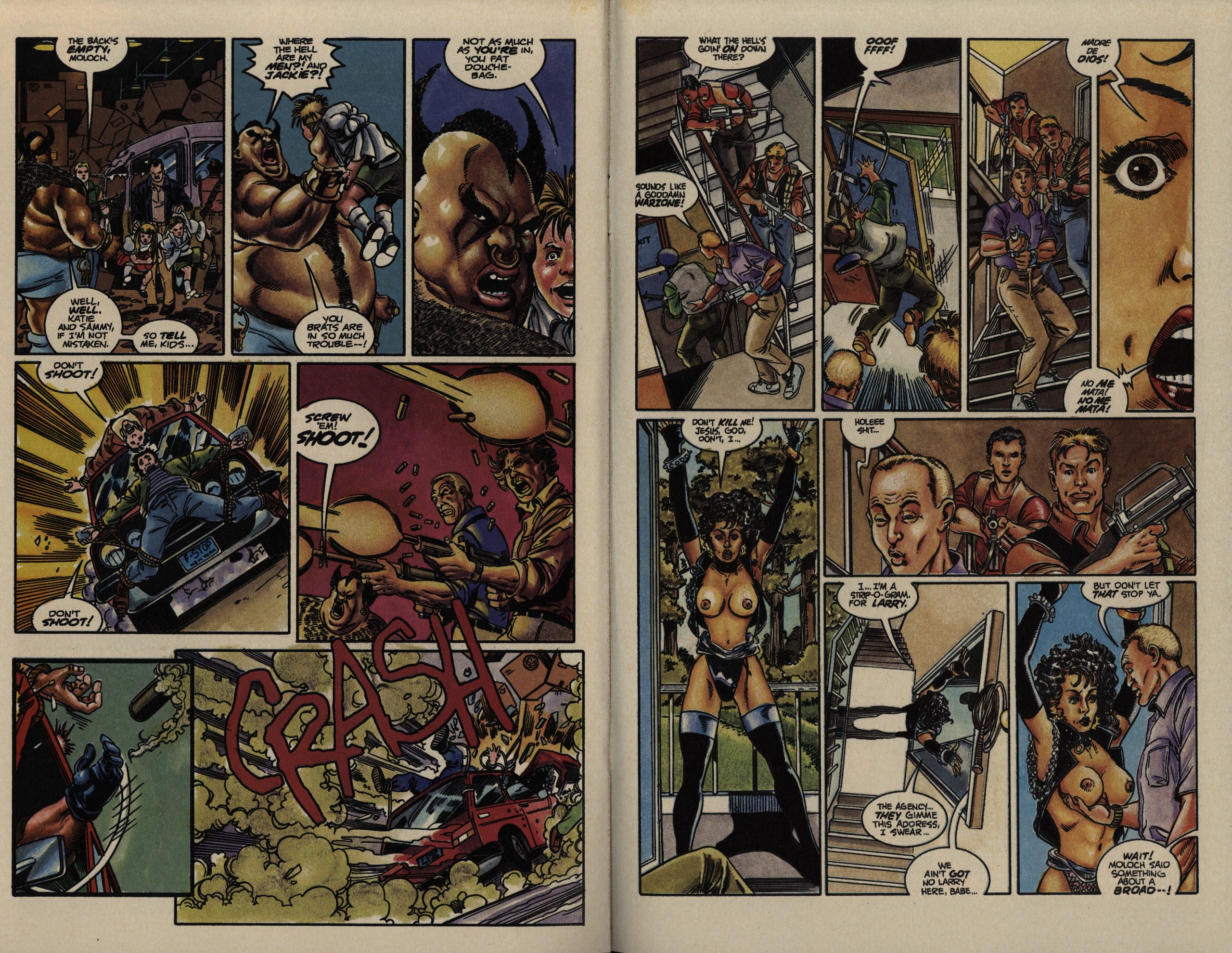 Oh, yeah, the third issue is about torturing kids to death or something.

Sachs makes a Modesty Blaise entrance, as she puts it later in the issue. It’s such a trenchant commentary on… on… 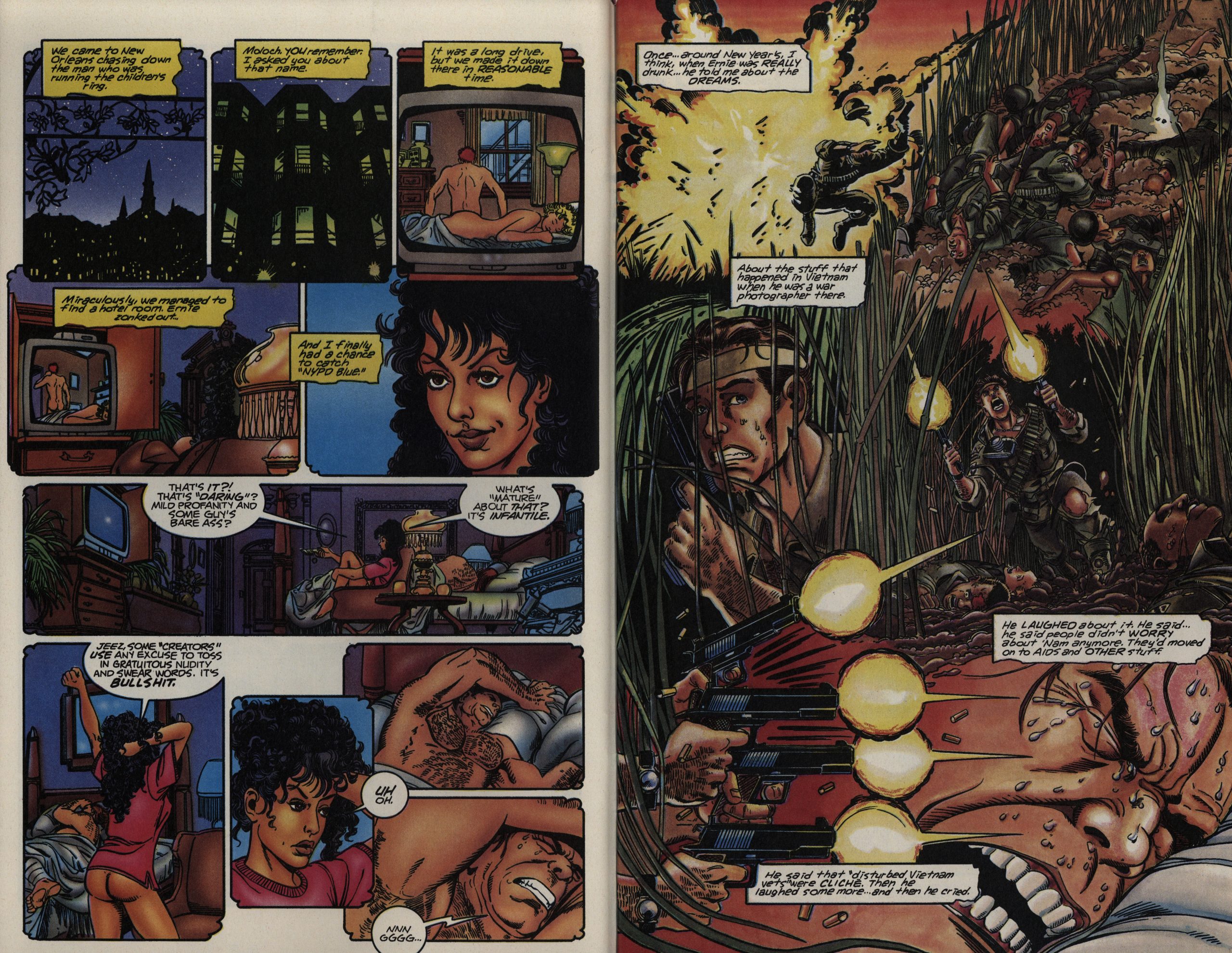 On stuff like this: Sachs says NYPD Blue infantile for showing a butt (and then shows butt) while Violens is having a Vietnam War flashback while thinking about how Vietnam stuff is outdated.

You can either find this 1) pretty amusing or 2) roll your eyes and take it as a reflexive move on David’s part to short-circuit any criticism of the comic itself: Yes, the book is infantile, and yes, having one of the protagonists being a tortured Vietnam vet was really over-done by 1993. 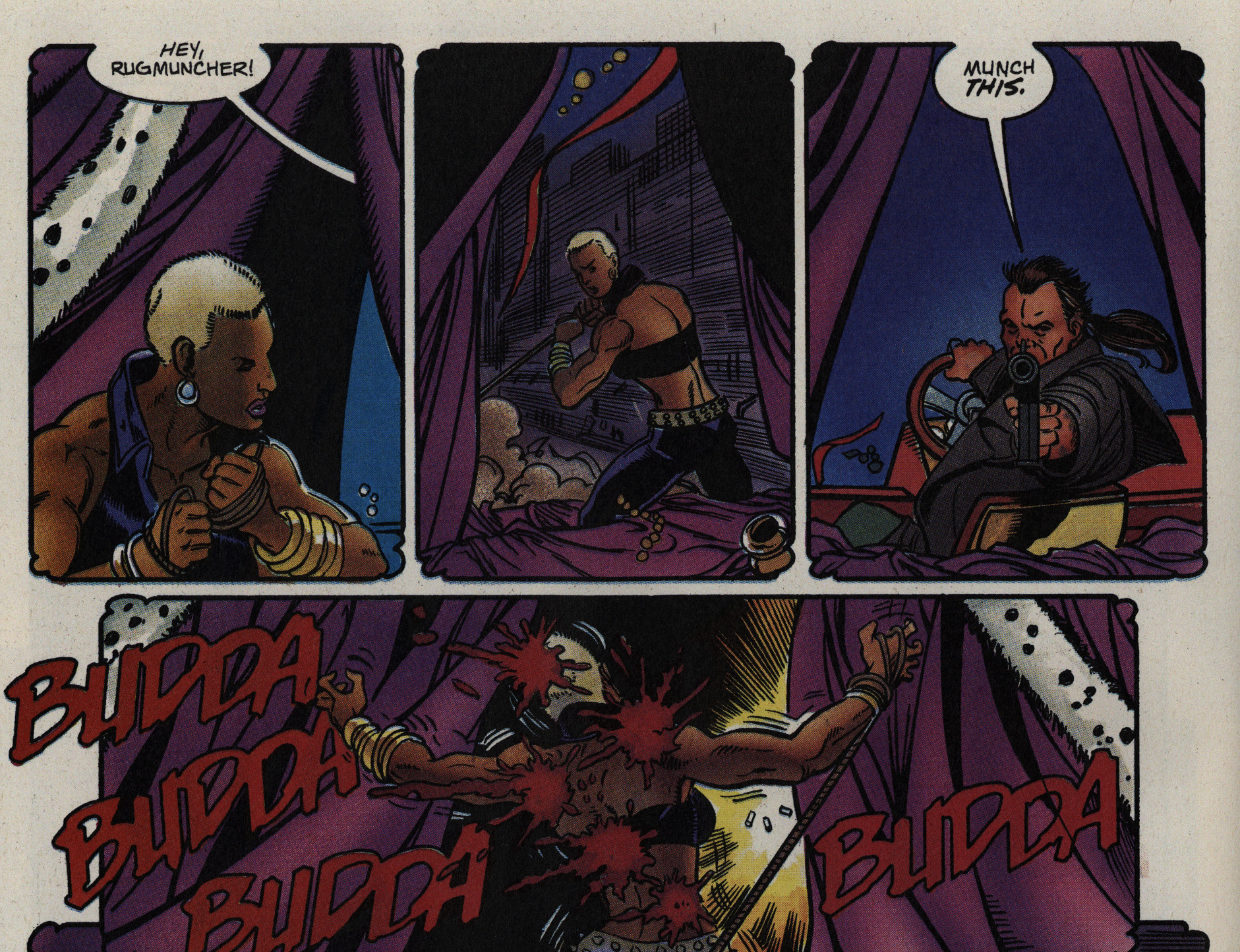 The main fight sequence in the final issue is a lesbian called “Rugmuncher” (no really). Here she dies. 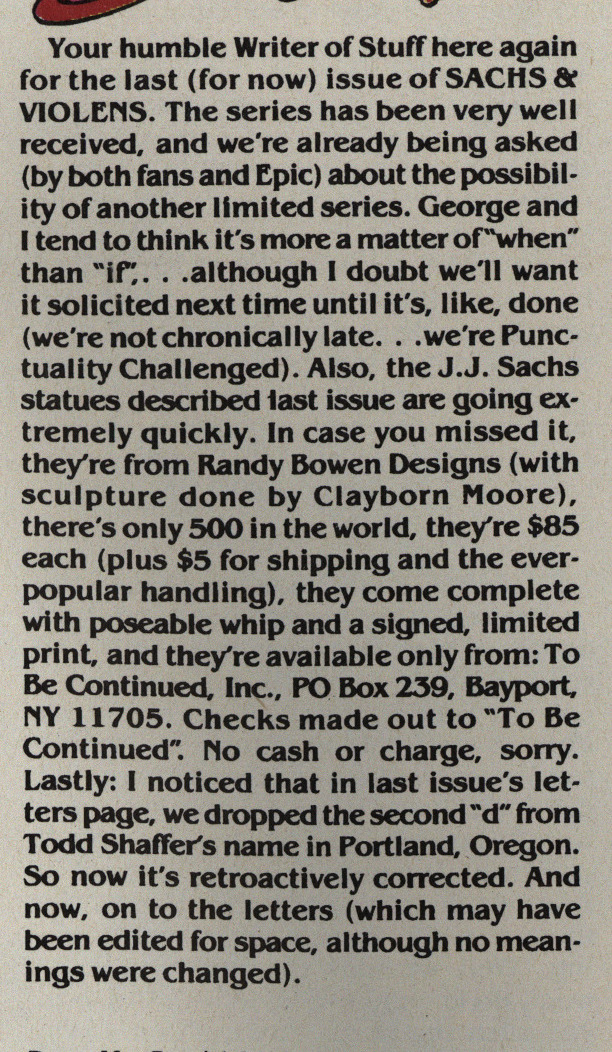 David tells is that the series was really well received and that they’ve been asked by Epic to continue it. Which seems really unlikely, since Epic had been more or less shut down by July 1994, when this was published (making it one of the last things Epic published in the 90s).

David also explains that the series had been kicking around for a long time (with different illustrators) before Perez took it on. 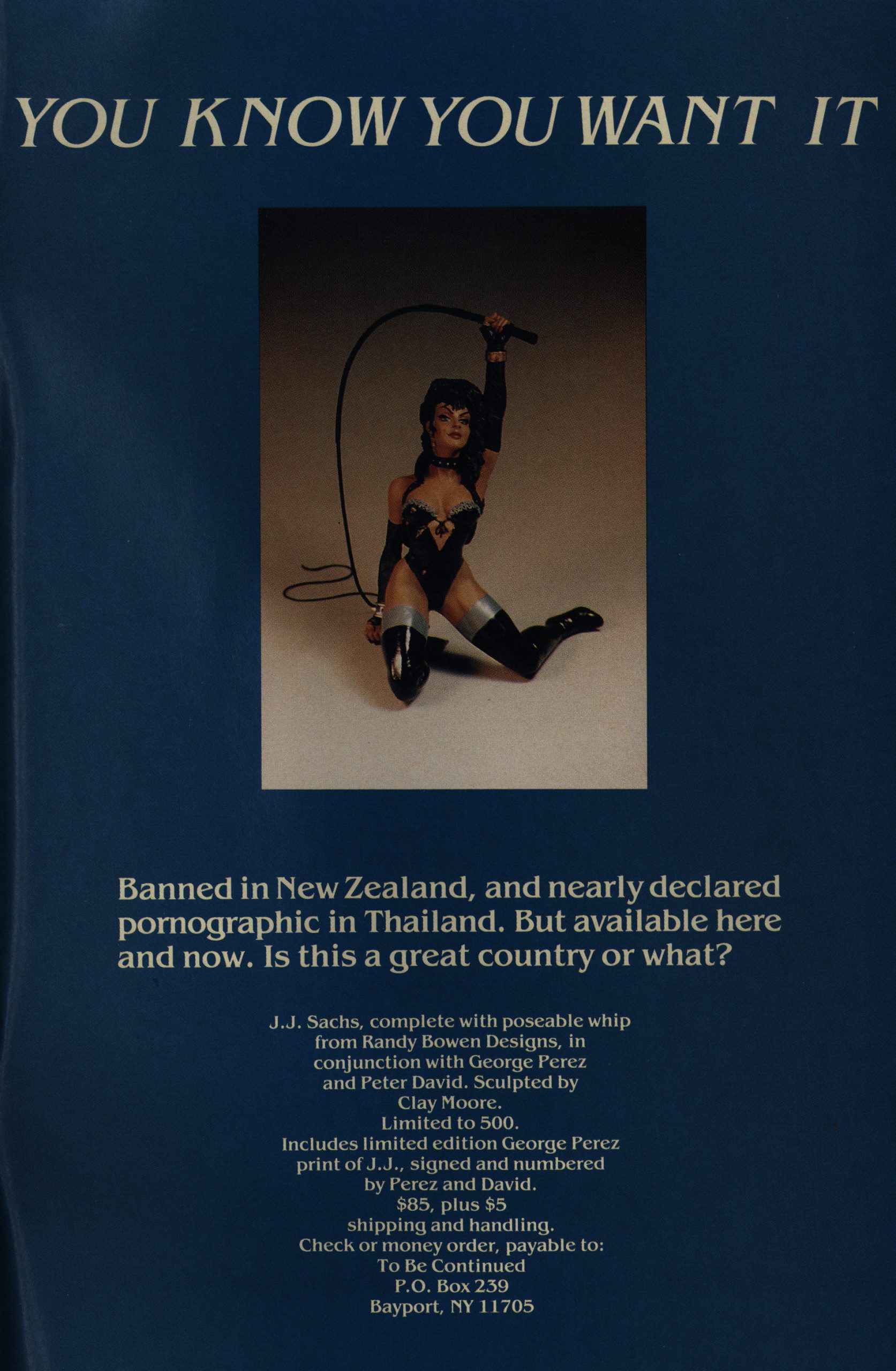 Oh, and they’re flogging a status (with poseable whip) of Sachs.

Well, that was a shit show. Not only were the issues squicky and awkward — there was no story arch to the series. It felt very much like reading the first four issues of an ongoing series that just petered out.

A collection was released by DC in 2006 and by IDW in 2016, so I’m guessing there’s a bunch of people who liked this series?

So even though Sachs and Violens has some dark and gruesome moments, there isn’t that overload of angst and ultra-badass dialogue that characterized the comics of the mid-90s. At least one of the characters (J.J.) is actually having fun, while Ernie’s angst is minimized to a few pages, and he’s actually a good guy, which is more than I can say for a whole load of “superheroes” that were coming out at the time. In short, it’s a fun story with likable characters.

It just didn’t work (as they really just did not fit into the pages of a Comics Code approved book. I mean, come on, right?), so he instead pitched the concept as a series to Epic Comics, back when Archie Goodwin was still in charge of the line (so this would have to take place fairly early in David’s run on Incredible Hulk, since Goodwin left Epic at some time in 1989 and David’s first Hulk issue was in early 1987). Goodwin turned it down, but obviously it eventually ended up at Epic years later!

And there’s a perfume.