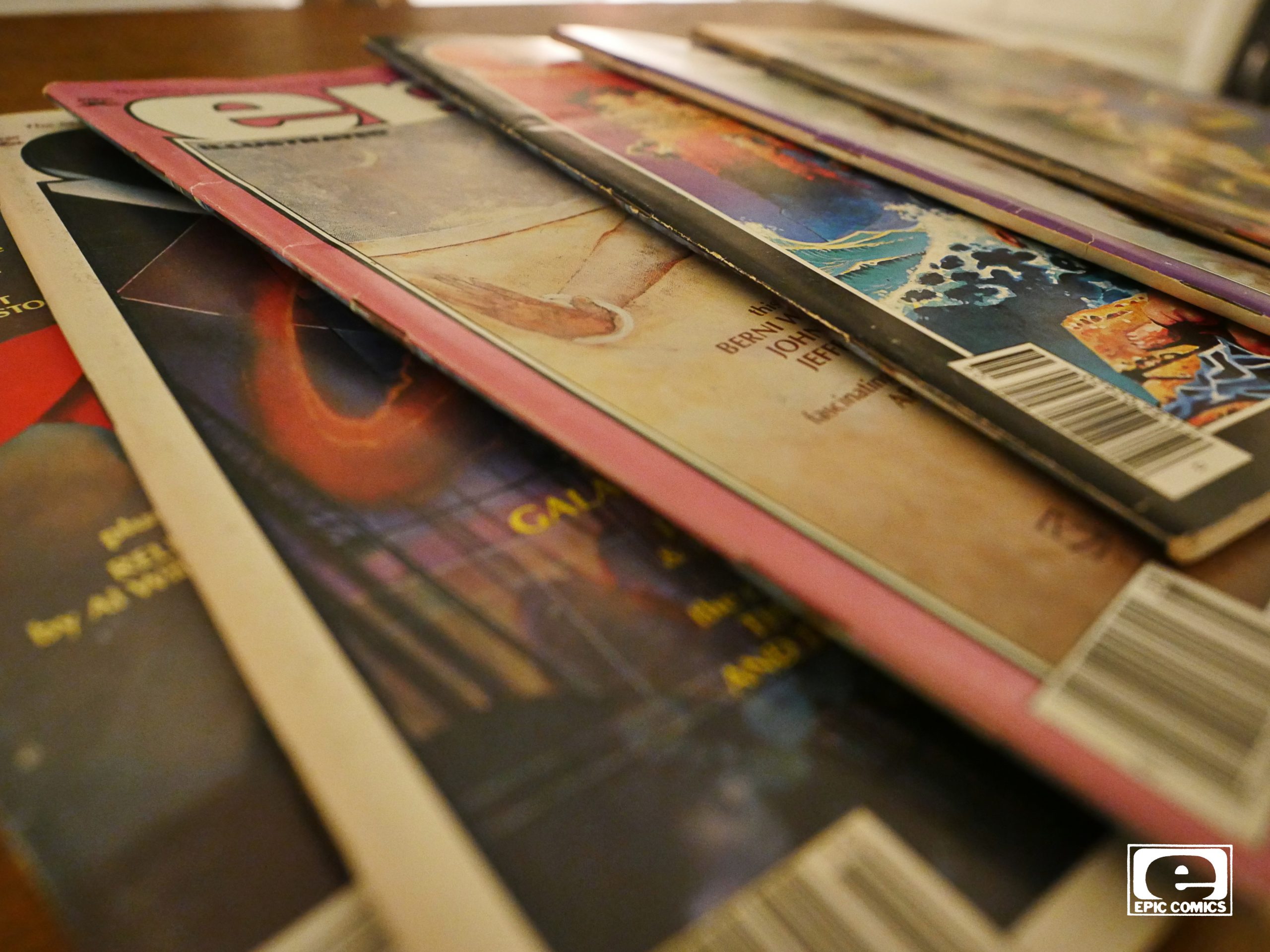 OK, just two more of these and we can start Epic Comics. Well. One more if you don’t count this one. John Bolton moves to colour in the Marada the She-Wolf feature (written by Chris Claremont). Looks good, and the stories get a bit more light-hearted? 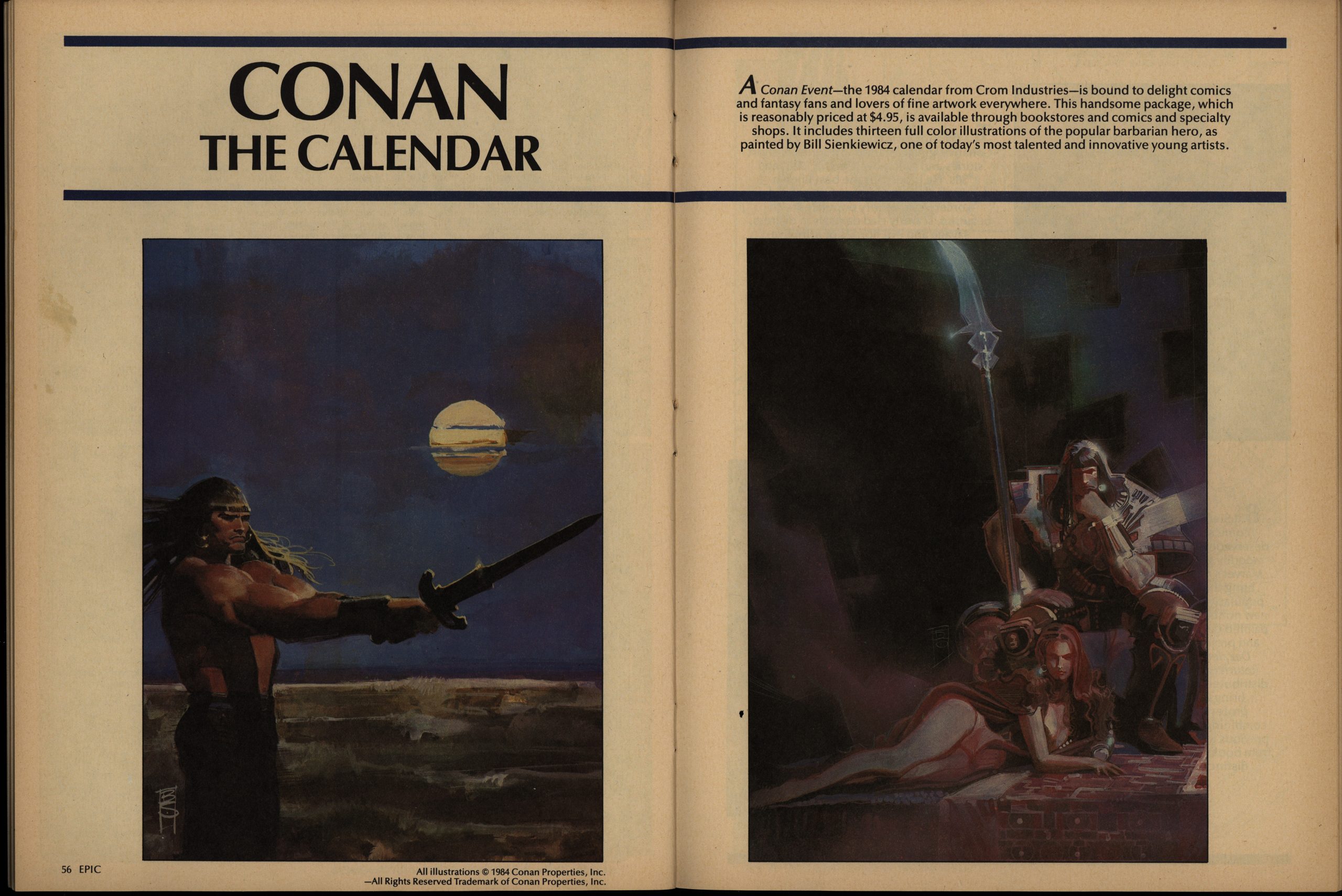 This is just everything: At random, a Bill Sienkiewicz Conan calendar. I mean… This is what makes Epic Illustrated fun to read. I mean, the main serials are better than can be expected, but the random stuff just makes the magazine. 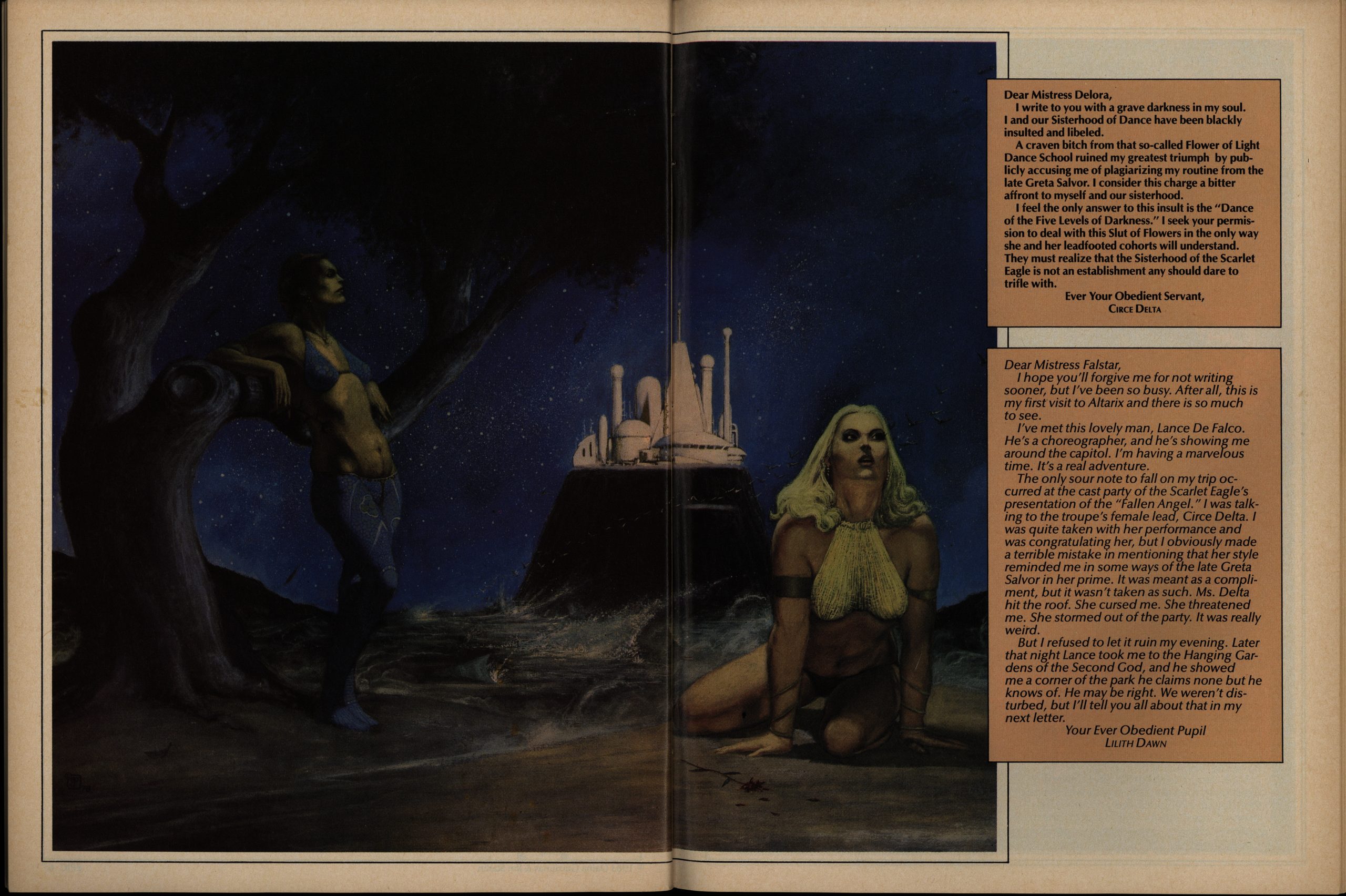 I know I’ve bitched a lot about these “put some illustrations together and have somebody write a story based on them” features in EI, but here’s one that works. Incredible. Jim Starlin does the artwork and Diana Graziunas writes an epistolary story (with the requisite twist ending), and, for once, it’s readable.

(She does cheat a bit, injecting one non-letter bit. Tsk tsk!) 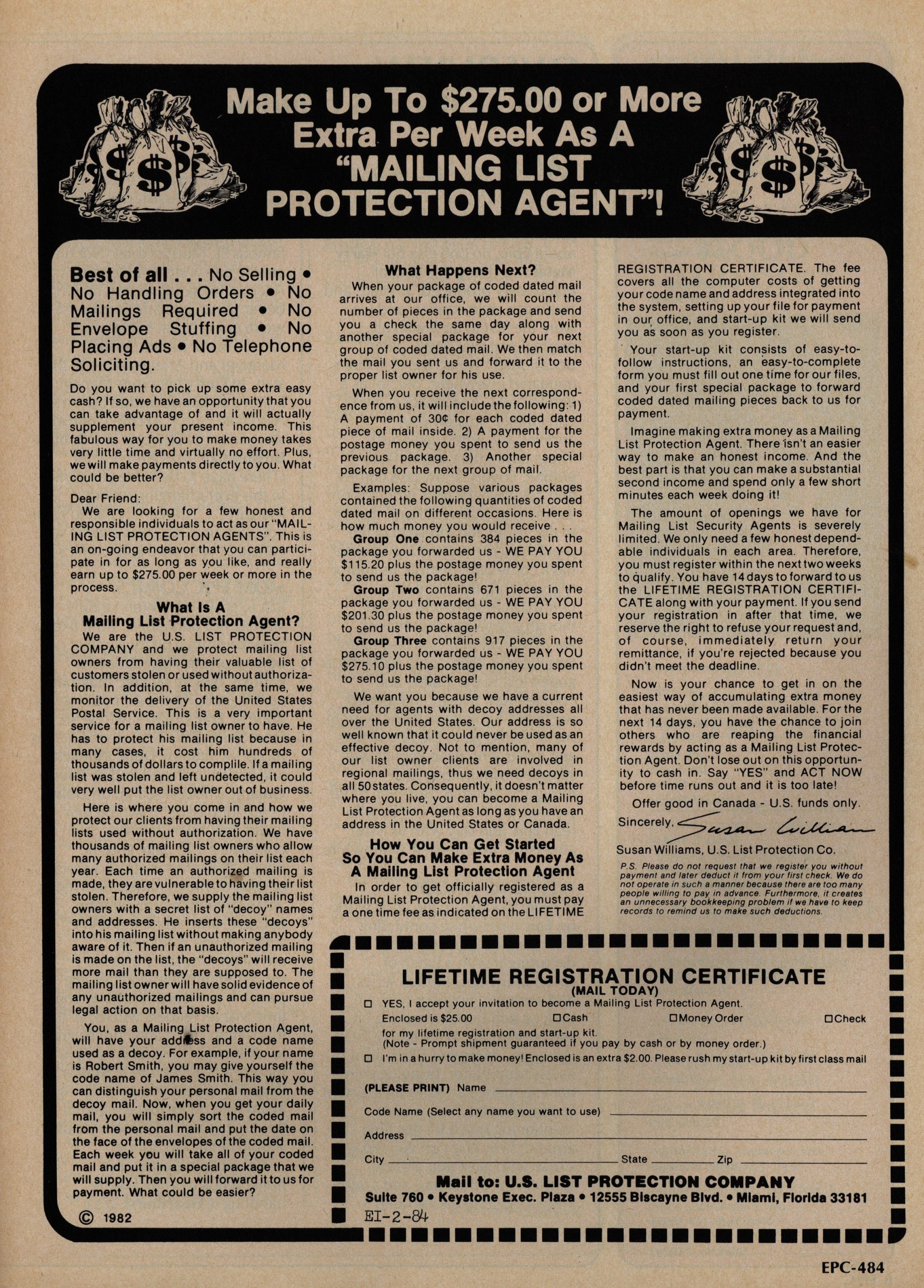 What the… Epic has published some slightly shady ads, but here’s one that’s an outright racket. If you send $25 to that address, you have a chance at becoming a “mailing list protection agent”, and you’ll “make up to $275.00 or more” for just receiving mail and forwarding it back to the company.

Did anybody fall for it, I wonder?

You have to wonder what the economical situation at Marvel was, though, to accept such an obvious swindle in their pages. Huh. A T M Maple letter. If you’re a comics reader of a certain age, you’ll have read hundreds of letters from him, but this is a bit outside his turf, isn’t it? 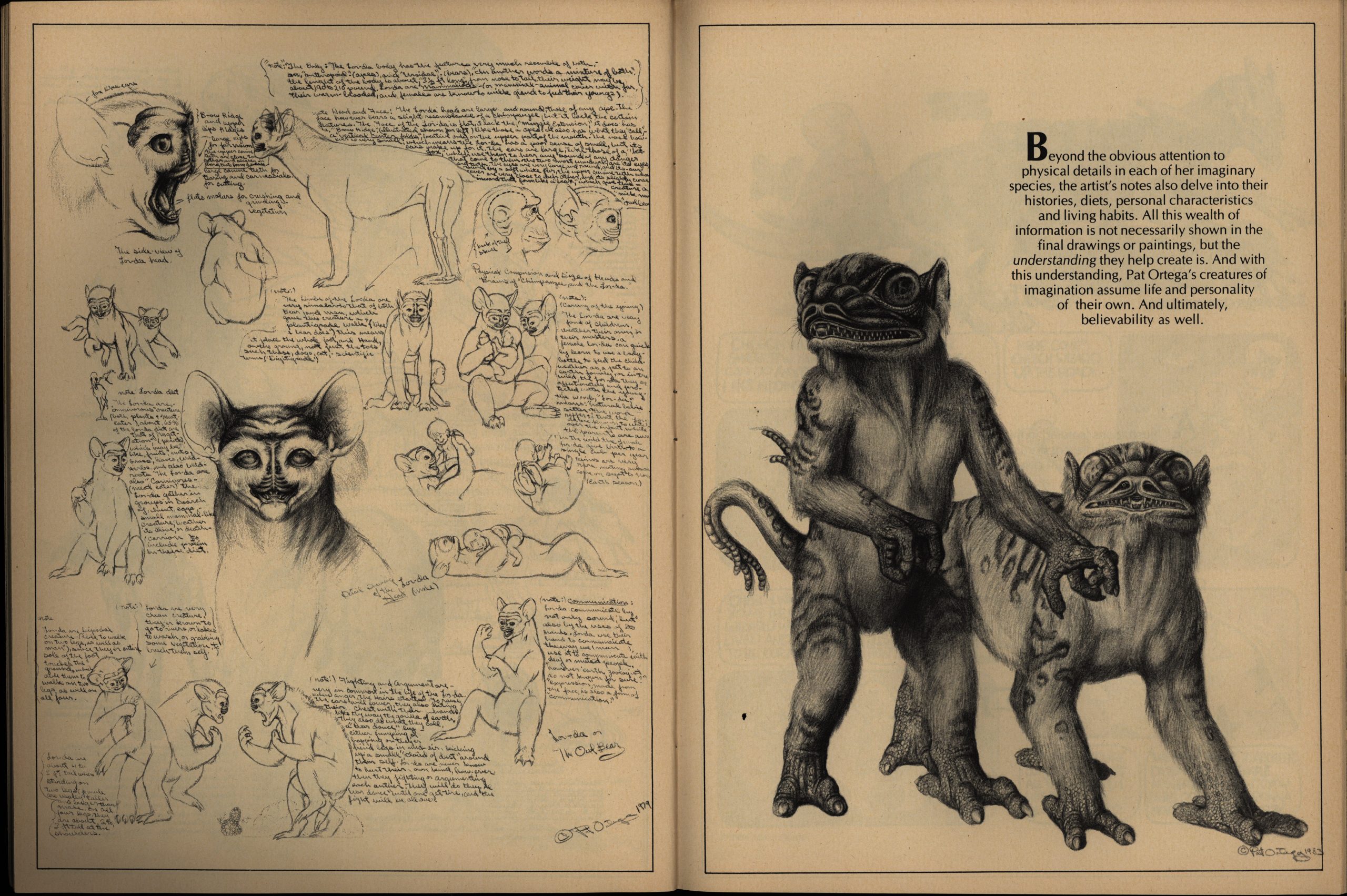 Speaking of random stuff, here’s some creatures by Pat Ortega. 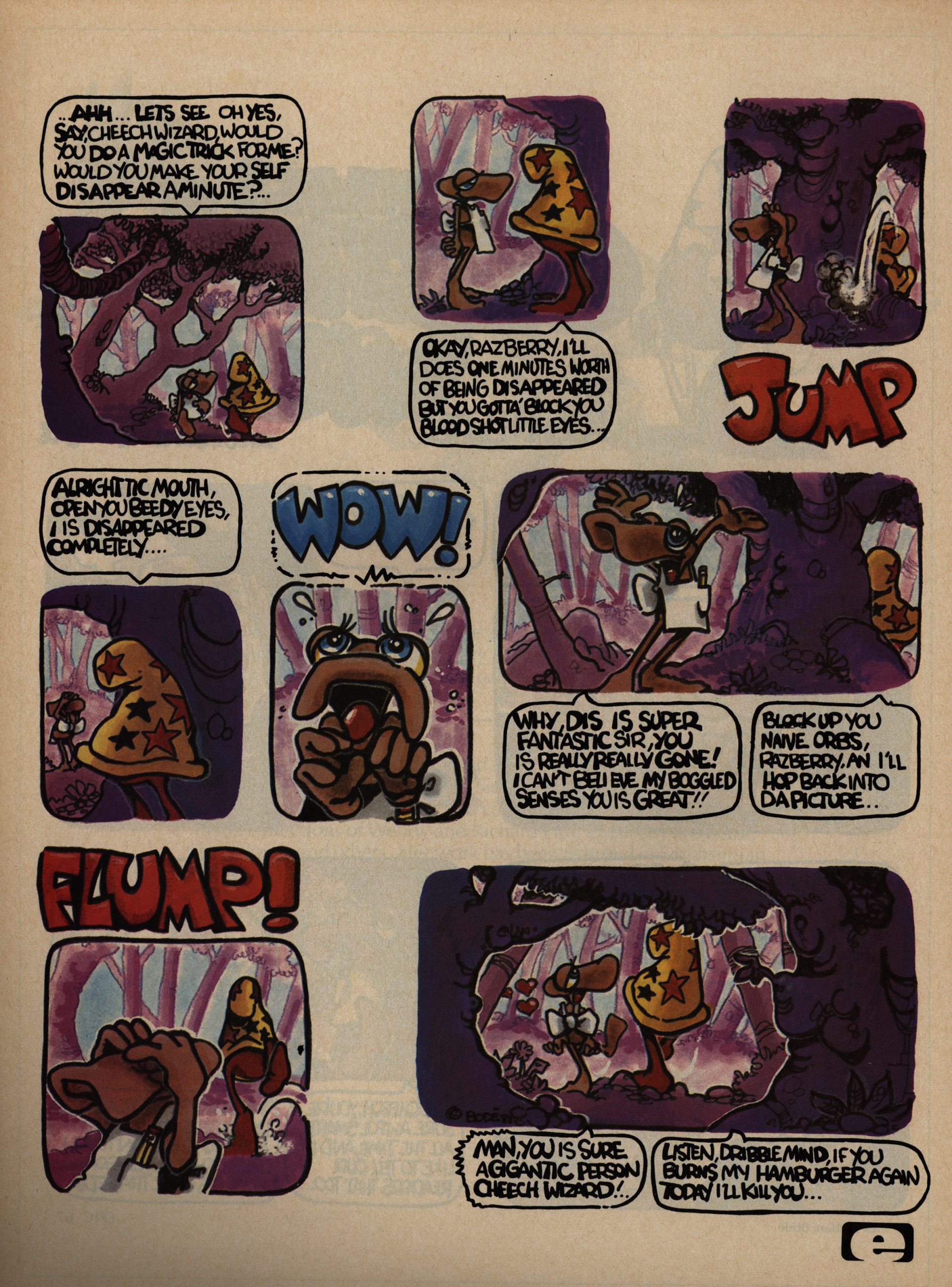 Unfortunately, there’s some Bodé stuff in almost every of the issues covered by this blog post. This is a Vaughn thing finished by Mark, and it’s just a typical example of how offputting the Cheech Wizard stuff is. Sure, he’s an asshole, but for the asshole-torturing-the-stupids schtick to work, it has to be funny. Here’s it’s tedious and the abusive relationship in itself doesn’t make it worth reading. Lee Elias and Bill DuBay writes a story about the real victims of Nazi Germany: Catholics! It’s way over the top and wallows in the abject, but it’s not very effective as a story. The way it’s told, I was sitting here thinking the entire time “so what’s the twist going to be? is the narrator the Nazi really? are there going to be space aliens? are somebody rising from the dead?” And, of course, after pages and pages of torture and rape we do get a lame twist ending.

Fortunately I was prepared and gaffa-taped my eyes before getting to the final page to avoid getting an eye-roll eye sprain.

The response in the letters page was, of course, somebody complaining about the story being unfair to Nazis. Reading the first few years of Epic Illustrated has been kinda interesting. Goodwin was working hard at putting together a package that’s readable and looks good, and every issue has basically been better than the previous one. But that’s not the case with these issues: It feels like treading water. We get the dependable veterans giving us the usual stuff, but the new artists that’s being brought in aren’t always as inspiring. Ooh! Lela Dowling! I’ve never seen her do this style of drawing before. 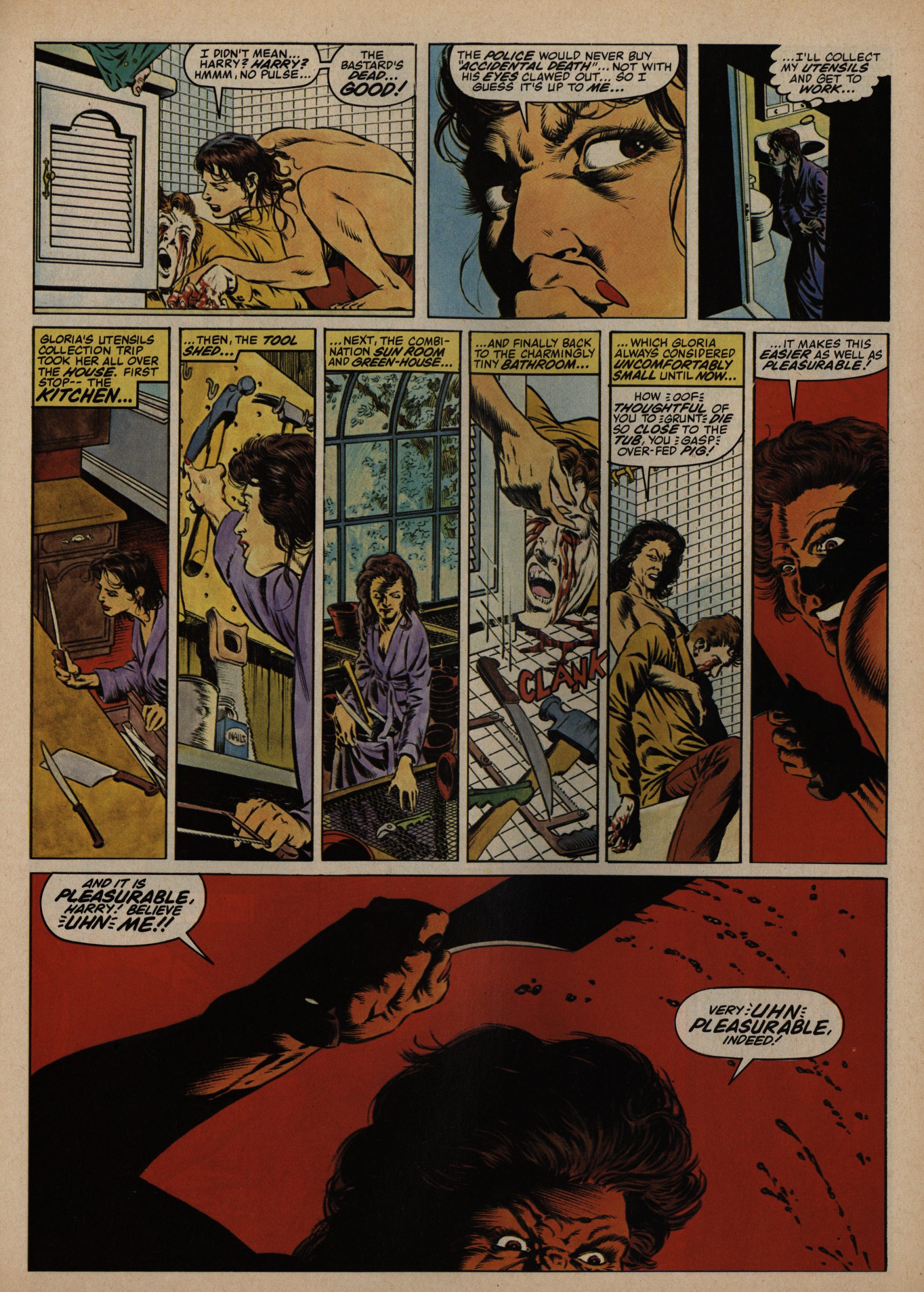 Berni Wrightson does a really disgusting take on an EC horror story, and it’s a bad fit for EI. (That’s the least graphic page up there; it gets disturbing after a while.) And it is really just the same old comes-back-from-the-dead thing we’ve read too many times before, but it is fun seeing Wrightson do one of these, I guess. 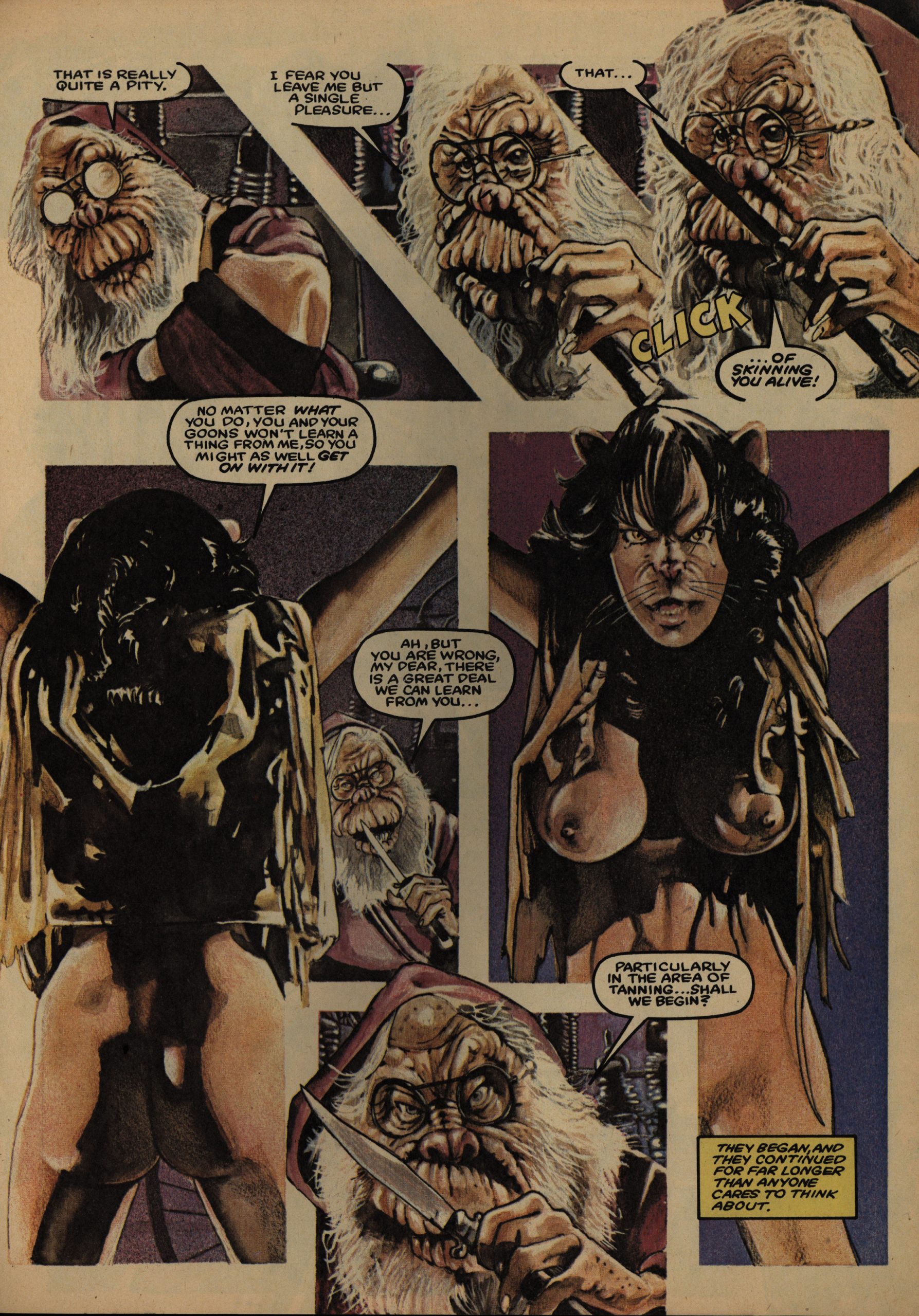 John and Laura Lakey round out a sour issue with another meaninglessly horrid piece, making this the most violent issue of EI yet. Goodwin seems to be asleep at the wheel. 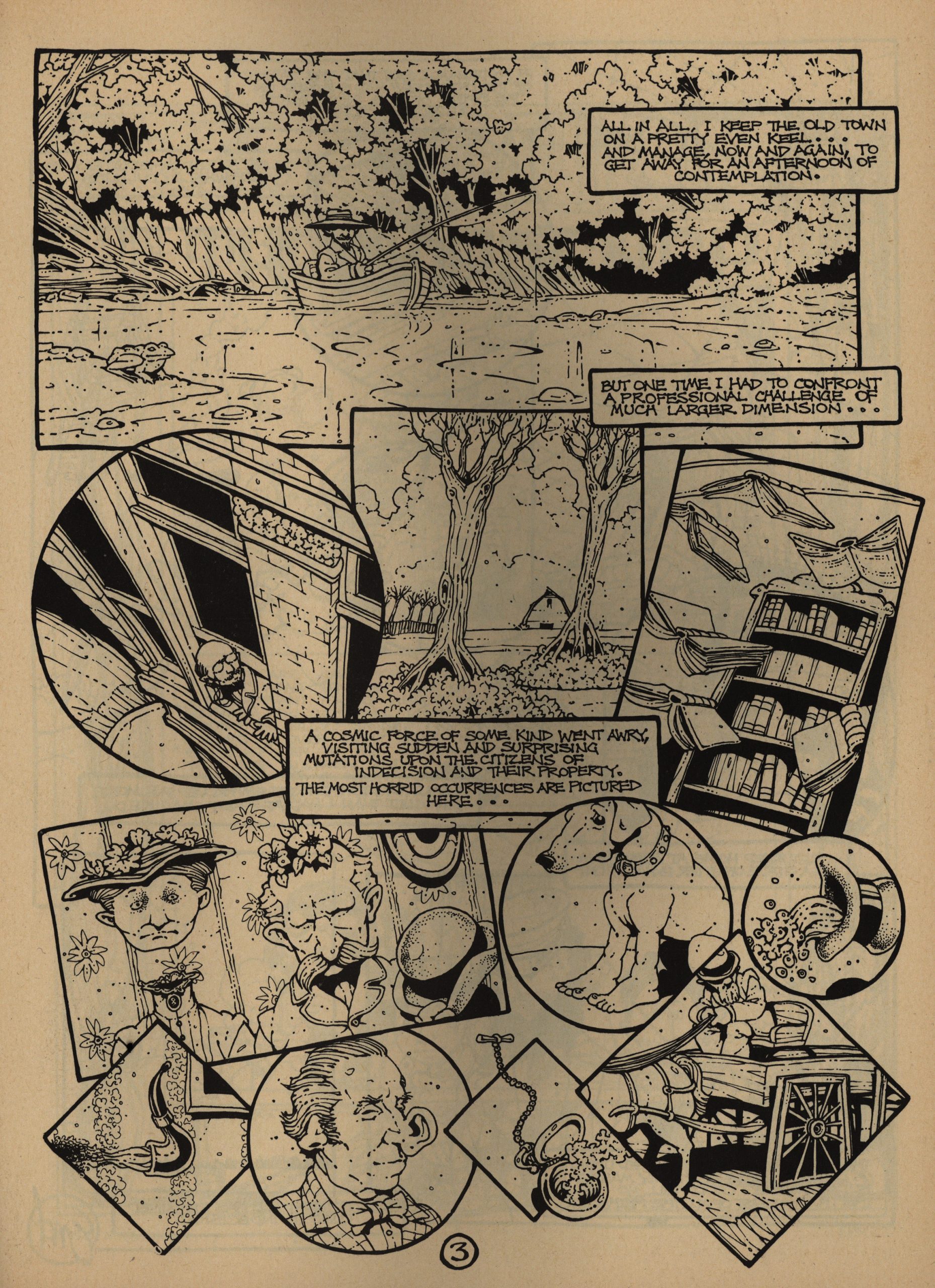 But there’s always Rick Geary. (If only!) “The most horrid occurrences are pictured here.” It’s just perfect. 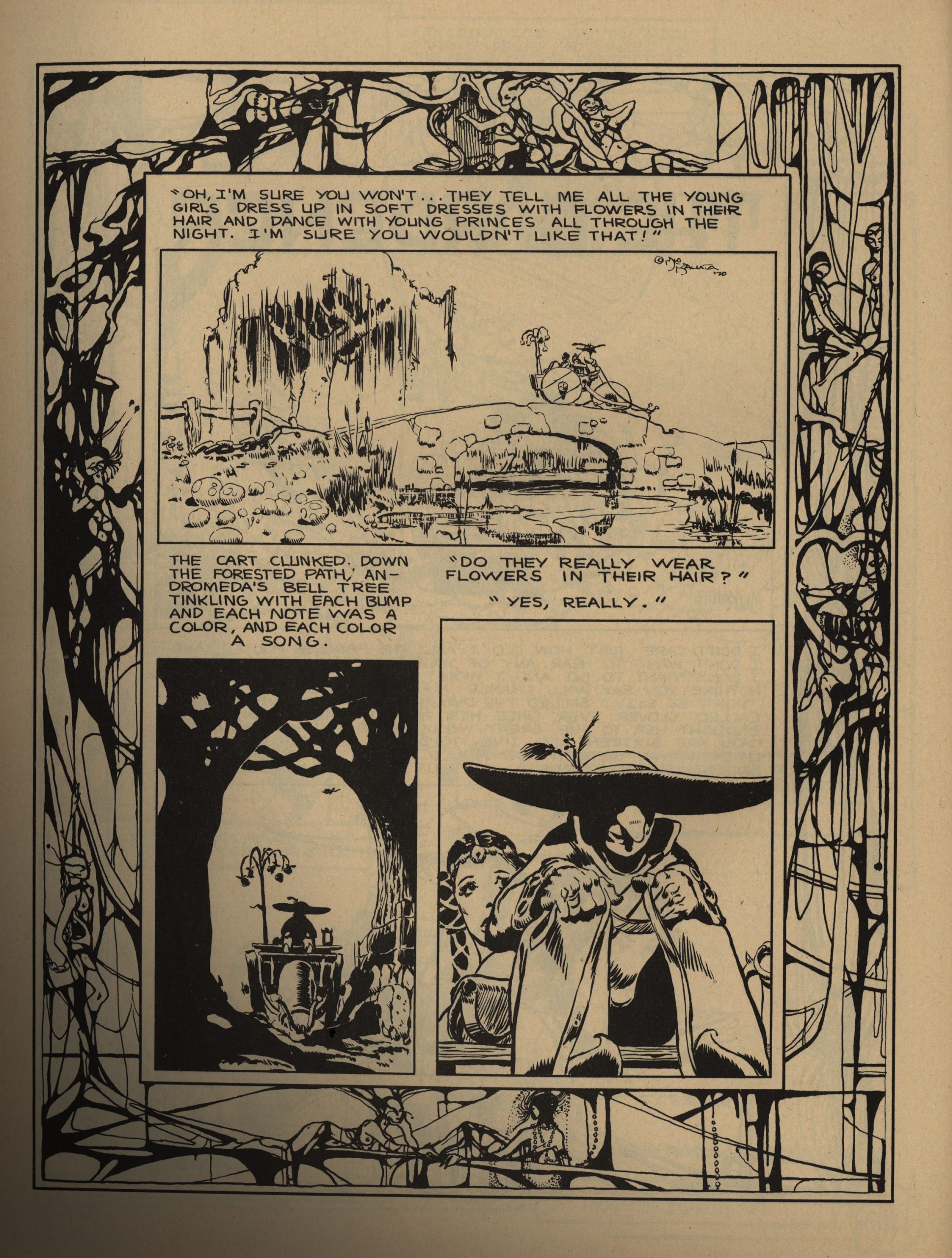 One thing Goodwin doesn’t do is run reprints. Well, not much, anyway. But he does run old things that haven’t seen print before, like this Kaluta storylet (one of a handful), and perhaps there was a reason they were never printed before? But they do look nice.

Oh right. Cerebus. I do remember reading that Dave Sim used these as a try-out gig for embellisher Gerhard, but I’ve never read these before. This one is pretty insubstantial, but it’s got some great body language. 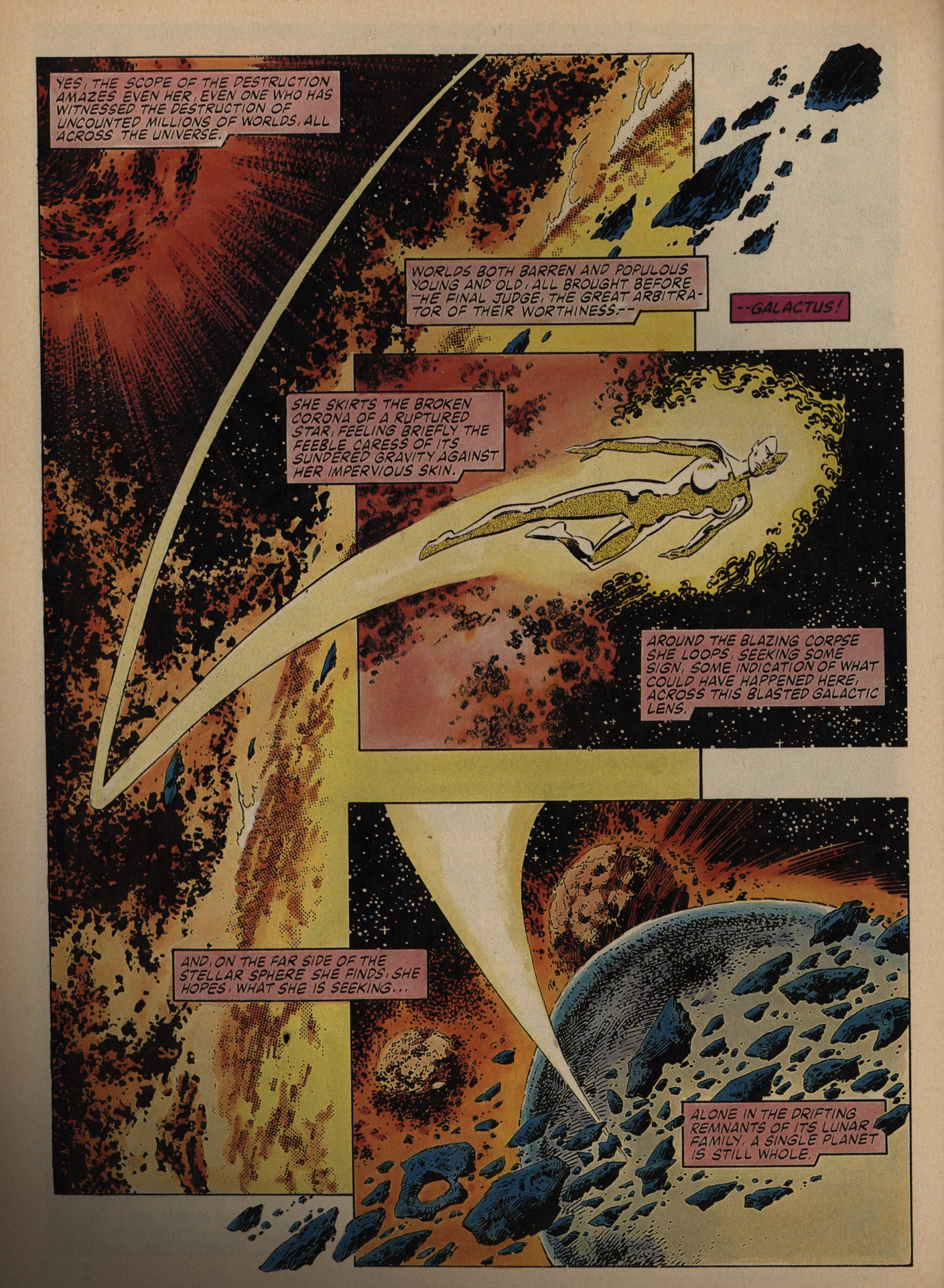 EI has refrained from using any of the Marvel super heroes in its pages, but John Byrne (et al) do a Galactus serial with the inaccurate name “The Last Galactus Story”. I’ve just read two parts so far, and I’m a bit disappointed they didn’t put more into it. I mean, it reads like a pretty normal Marvel comic book. 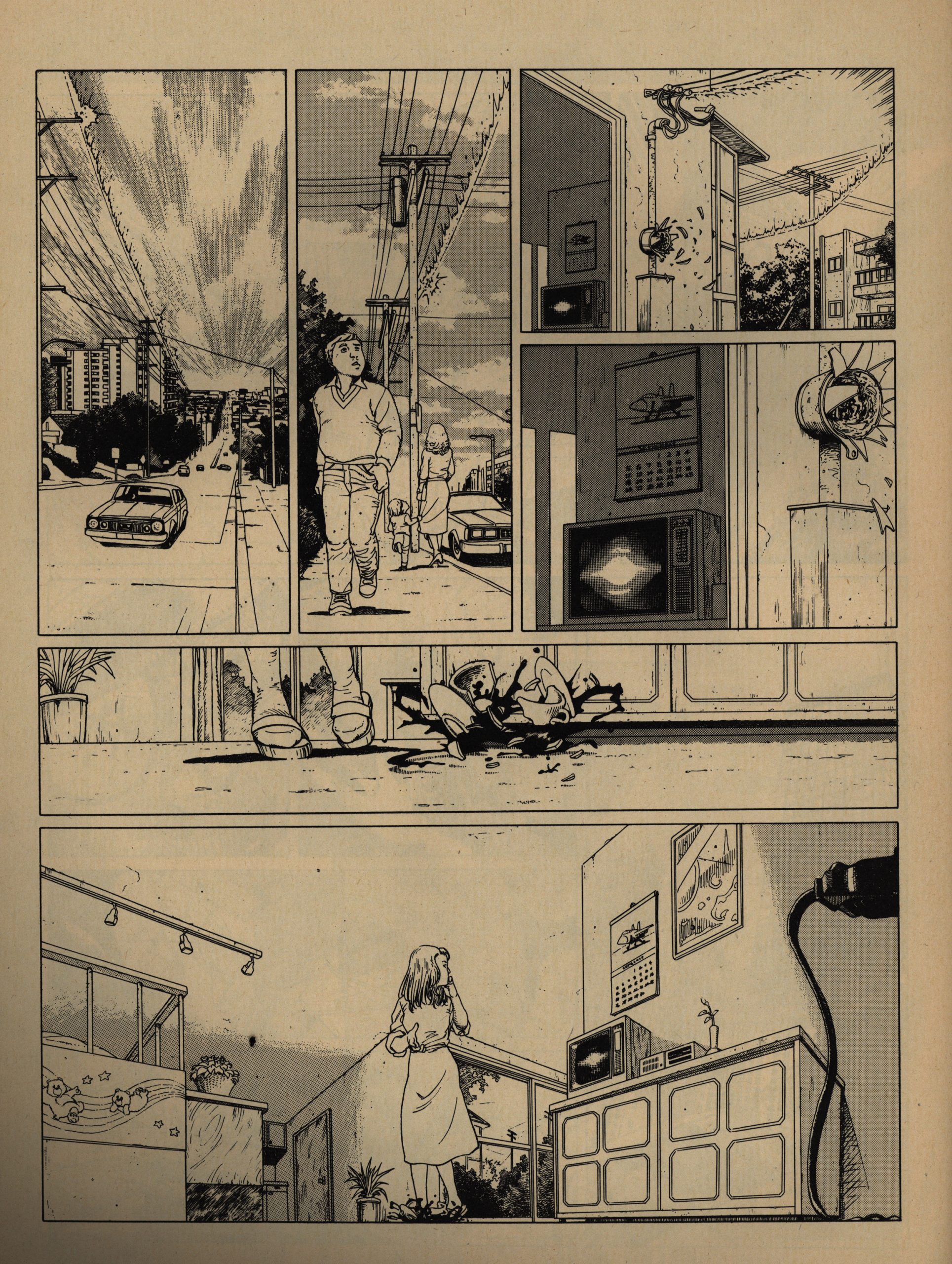 For the first time, EI prints a story from a Japanese artist without an introduction about how Japanese comics are so special etc. There’s no introduction at all! It can be done!

The story by Keiichi Koike is satisfyingly vague. 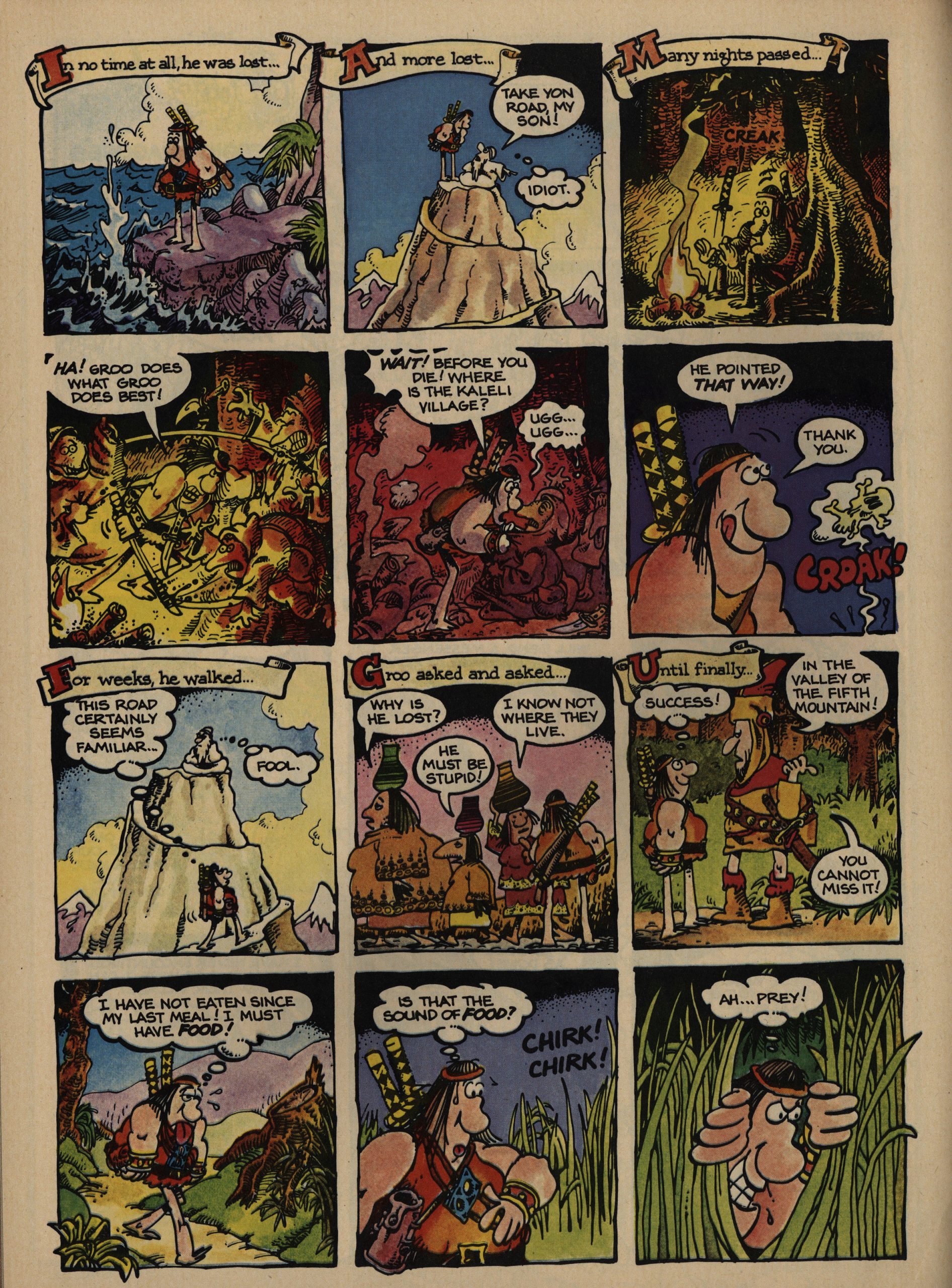 Epic Comics is starting to publish Groo around this time, so we get a four page story especially made for Epic Illustrated. 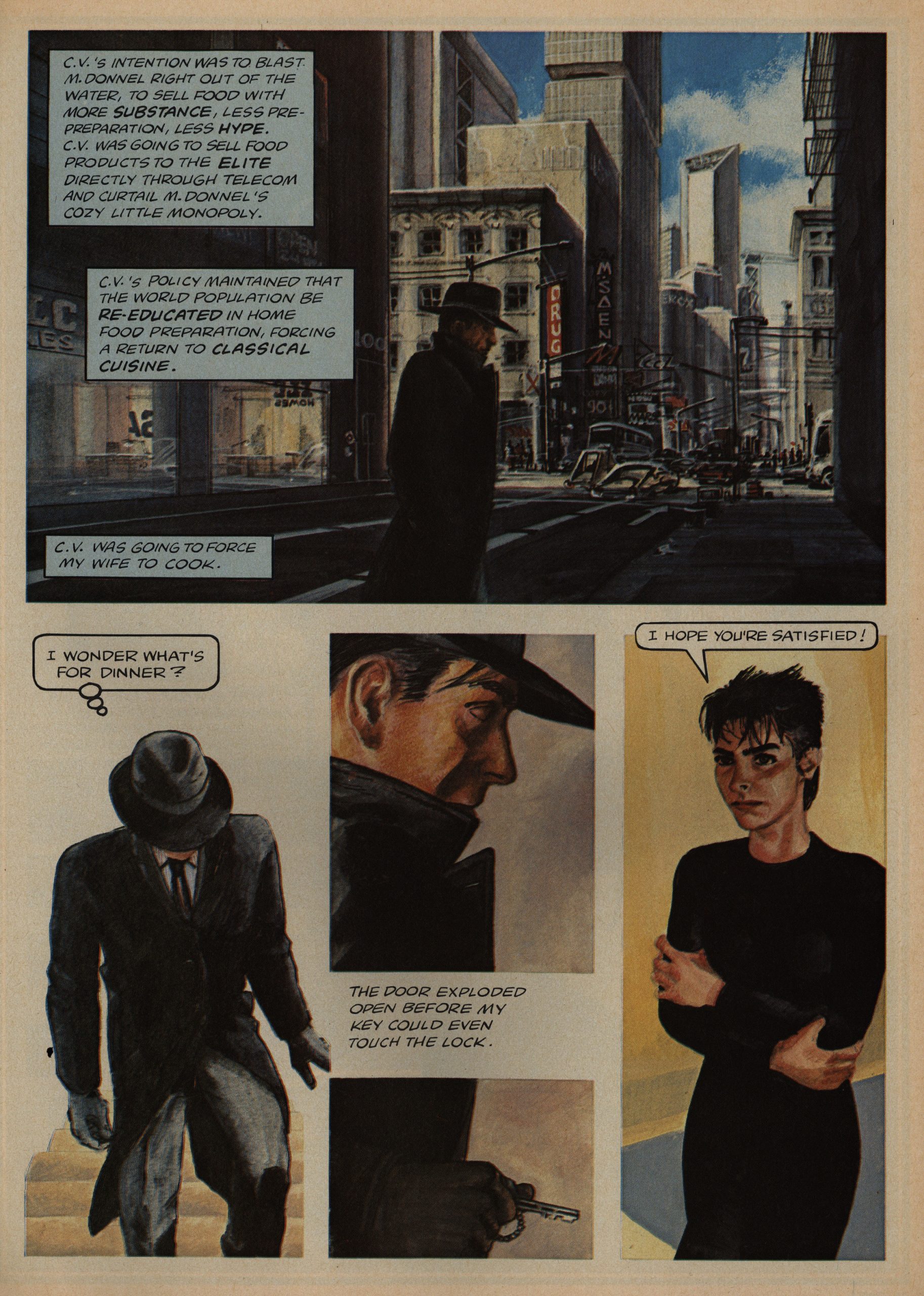 Quite a lot of the stories in EI have twist endings, but this Mike Saentz has a twist ending that involves food. I approve. OK, I love me some Al Williamson, and this is a stunning two page spread, but perhaps it stuns a bit for the wrong reasons? I mean, everything is so detailed that everything has the same grey level, so it’s impossible to fasten your eyes at anything. There’s just no purchase. Odd. 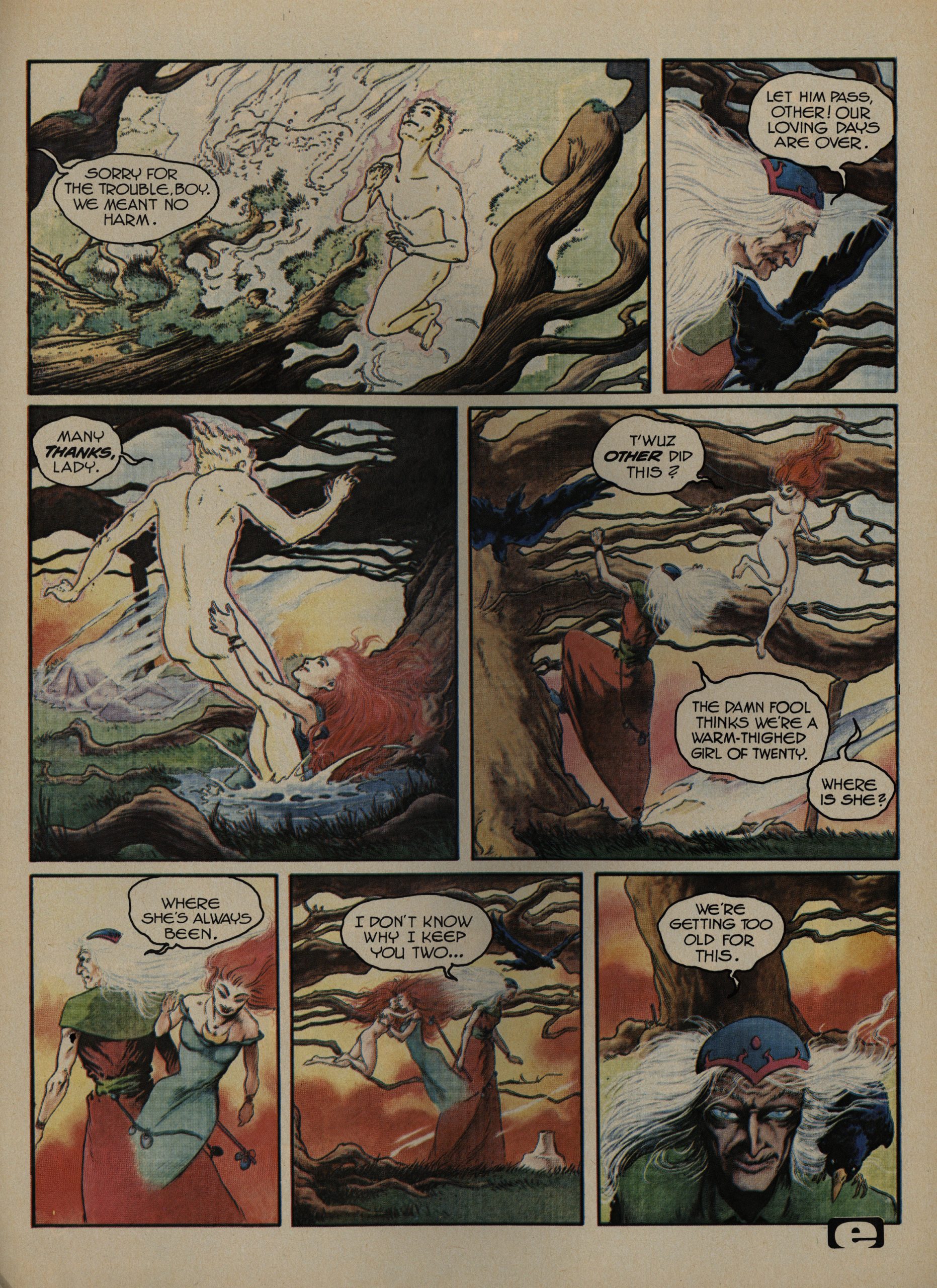 Elaine Lee writes this story drawn by Charles Vess, and it’s even more confusing than either usually do on their own, and that’s saying something. I mean, not the actual plot, which is simple enough, but what… the people are talking about…

OK, do you, too, get the feeling that I’m totally talked out about Epic Illustrated? Yes? OK, just one more year to go.