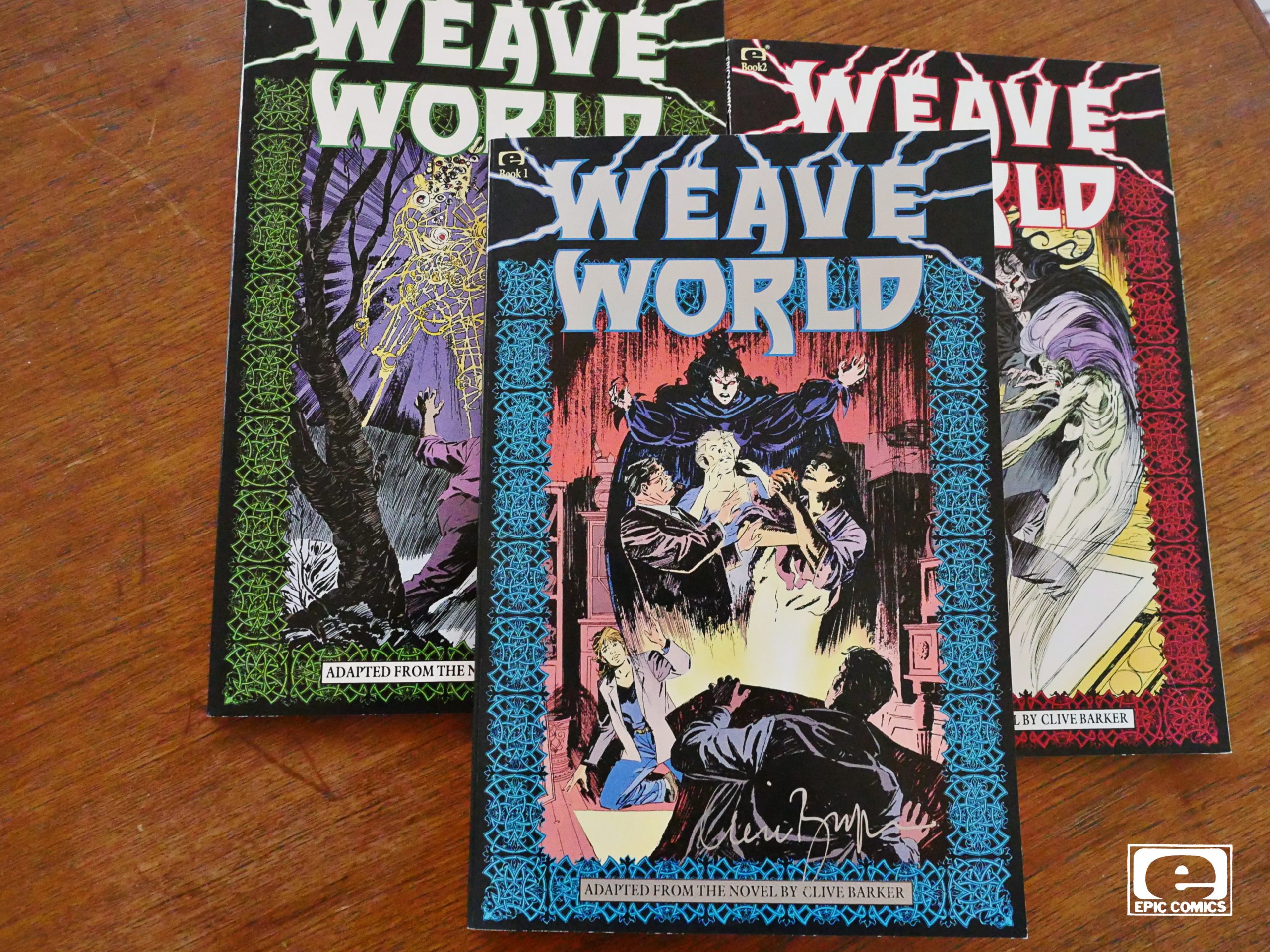 Huh. Is that first issue signed on the cover there? By… Cl… B… Clive Barker? I guess?

Anyway, I remember reading the novel as a teenager, and … I wasn’t super-impressed? I remember it being kinda… choppy? That’s all I remember, though; I have no idea what it was about. Hm… no… it was about… a world in a carpet? Something like that.

Anyway, let’s look at this adaptation. It’s three sixty-four page squarebound issues, which is pretty unusual for Epic — their go-to format is 48 pages, which makes me wonder why they didn’t release this as a four-issue series instead. I guess it makes sense to experiment with formats (to see what people are willing to pay for). 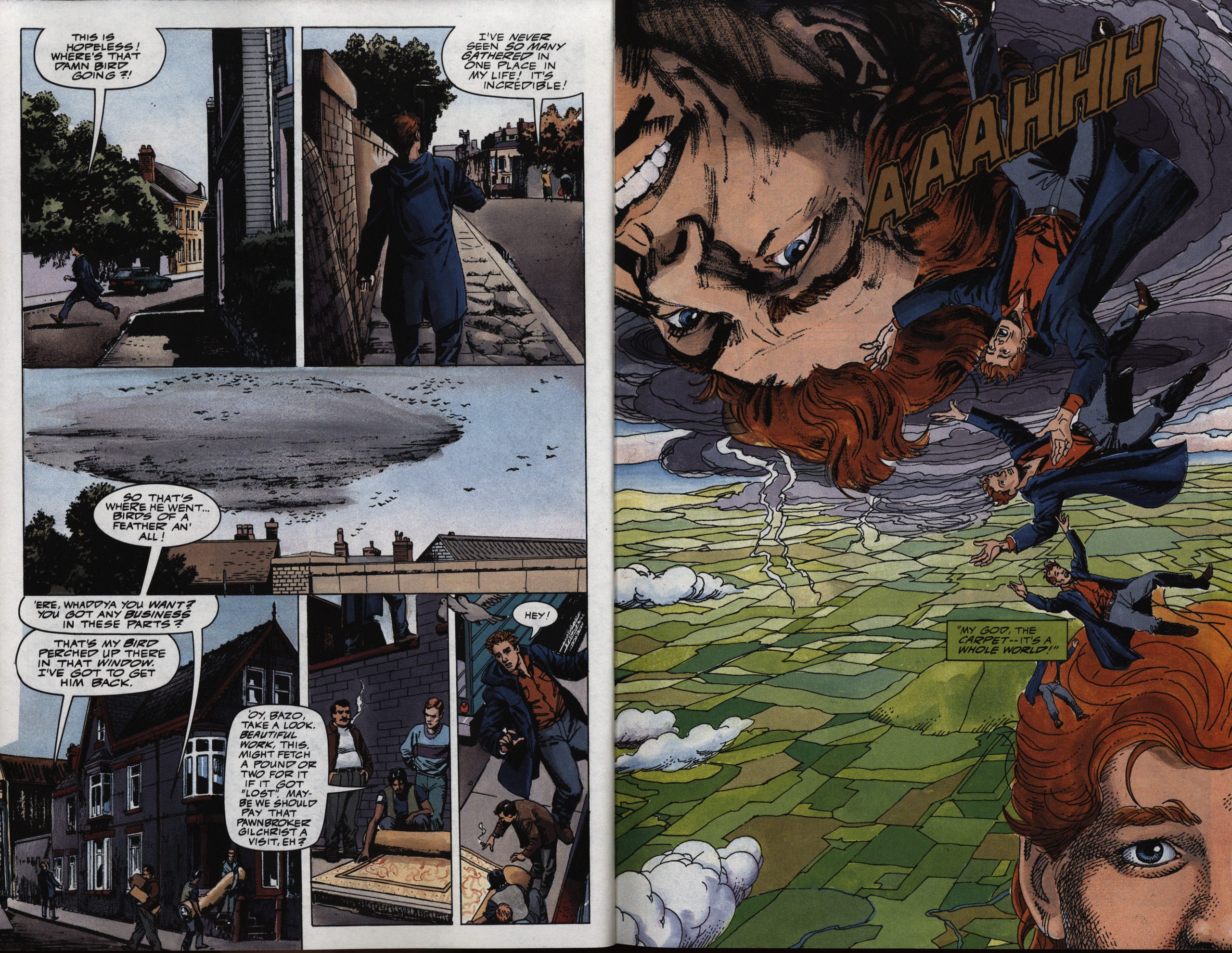 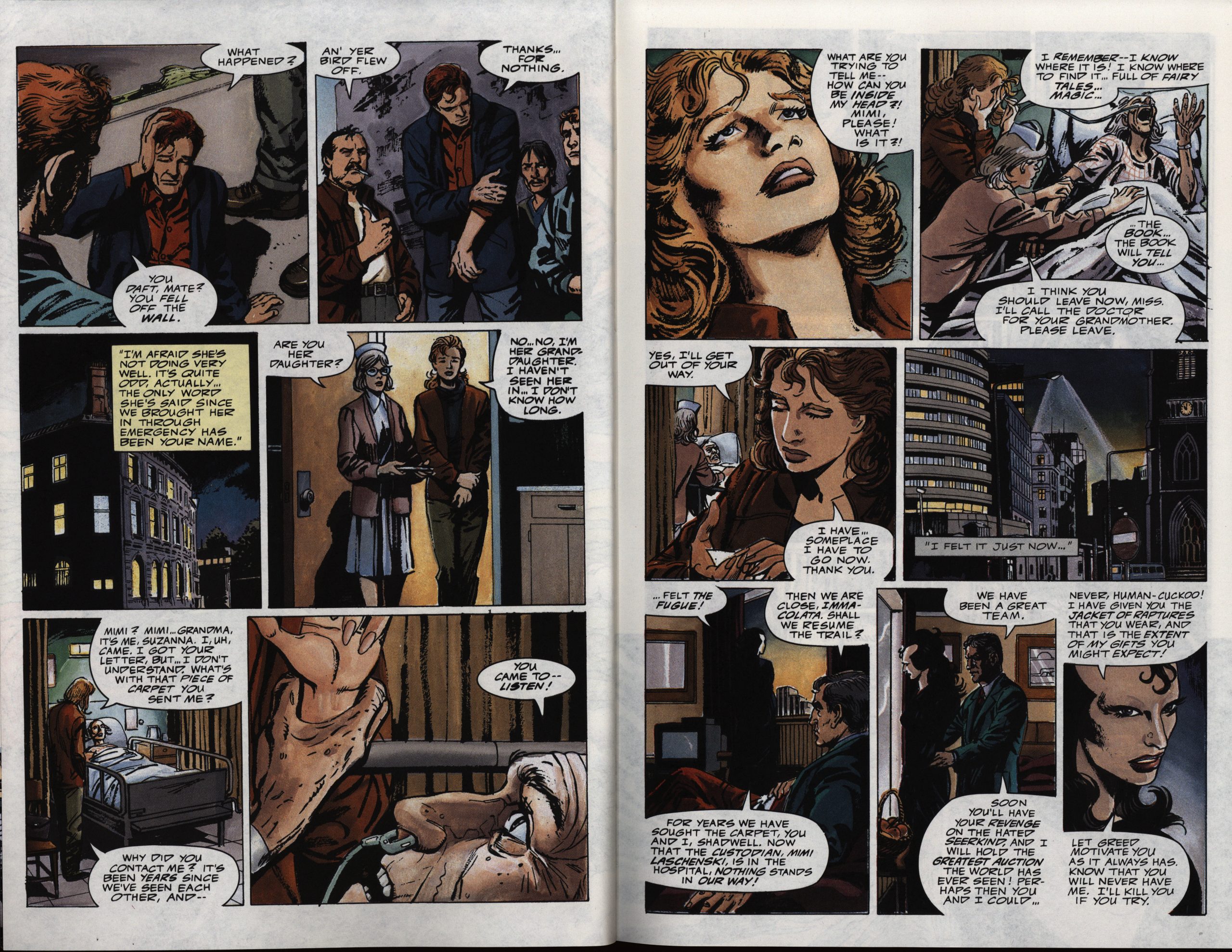 The two scans above are pages 2-5. Go ahead; read them.

What’s striking is how choppy they are. A lot happens over these four pages, and it’s all dialogue-driven; we don’t really get much of an explanation as to what’s going on (and I like that), but there’s also absolutely no tension or sense of direction. It’s just people talking at each other, mostly about things that doesn’t seem to allude to some sort of magical thing, but using a different lexicon.

I usually like Villagran’s inks, but Mike Manley’s pencils are pretty uninspiring. It’s pretty stiff and there’s no sense of movement or directionality in these pages. 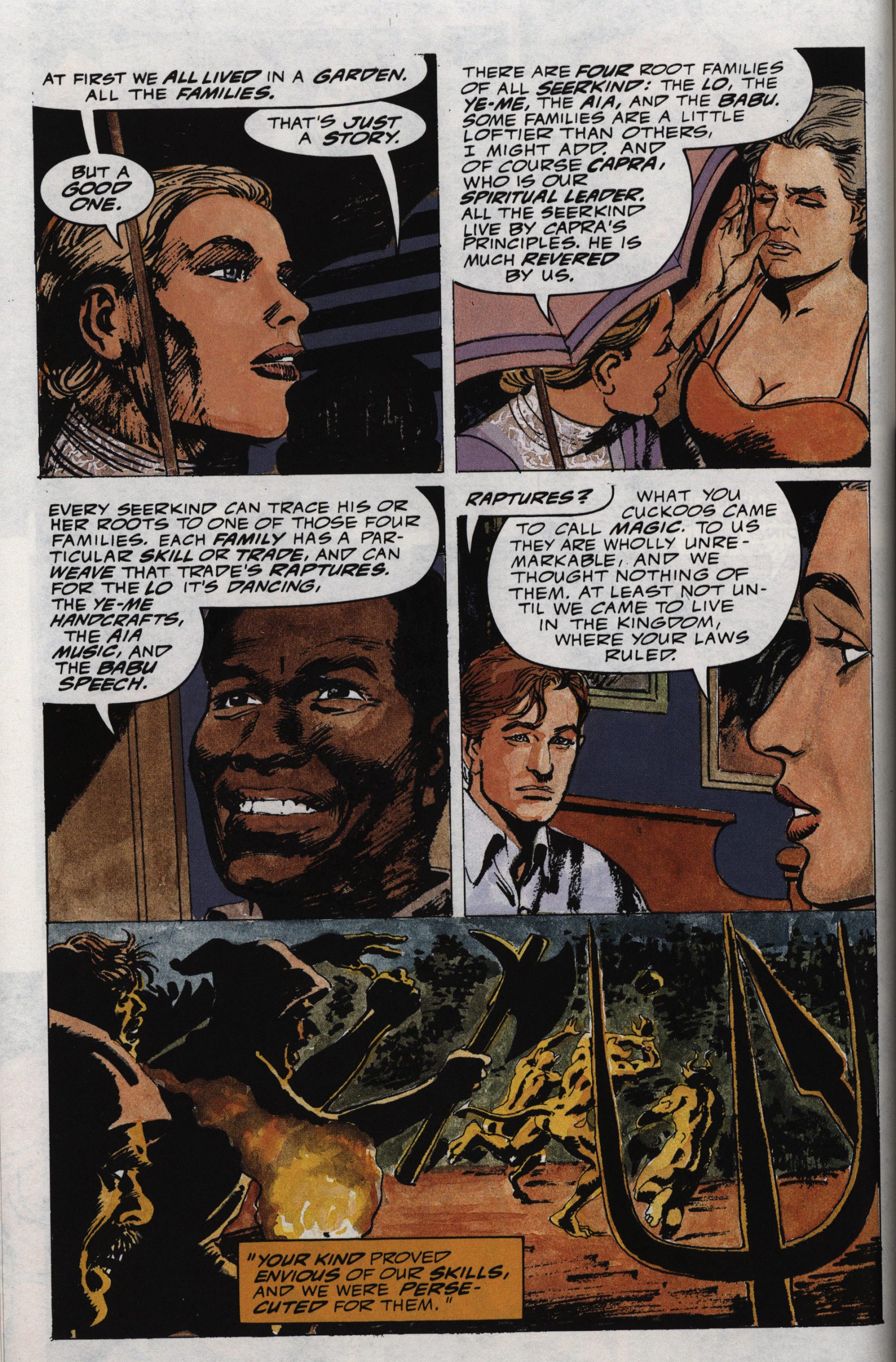 OK, so “seerkind” are witches, and “weave” is casting a spell, and “rapture” is magic, and the witches are persecuted by normal humans (“cuckoos”).

And… oh! This is pretty much the same concept as Nightbreed, right? A persecuted magical group of people who have to hide from mainstream society… Oh! Oh! This book is just yet another metaphor for staying in the closet? You get your weave on in the clubs, but the straights insist on raiding the clubs, so you have to hide even more? 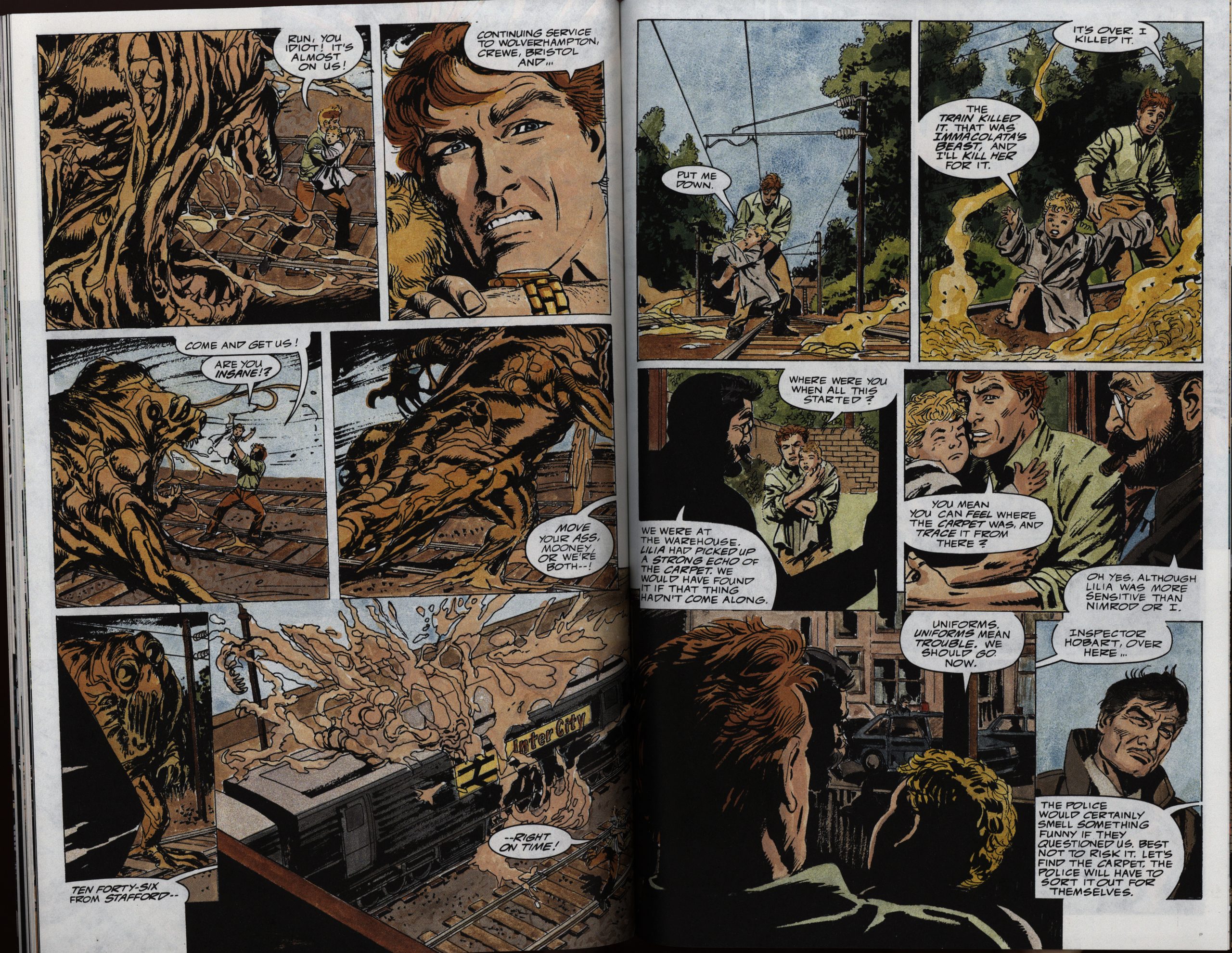 I can’t get over how choppy the storytelling is. Above you have a Big Monster Fight where Our Scrappy Hero uses his intimate knowledge of the train schedule to vanquish the beast… and there’s no sense of tension or drama, and there’s no denouement; in the panels following, we’re on to talking about something completely different.

This is like reading a 200 page plot summary. The book is just 6-700 pages, I think? If I remember correctly, it’s got a lot of plot, and I think they’ve basically chosen to shoehorn it all into this adaptation instead of leaving out non-vital scenes?

It’s a frustrating read, but at least it’s brisk. 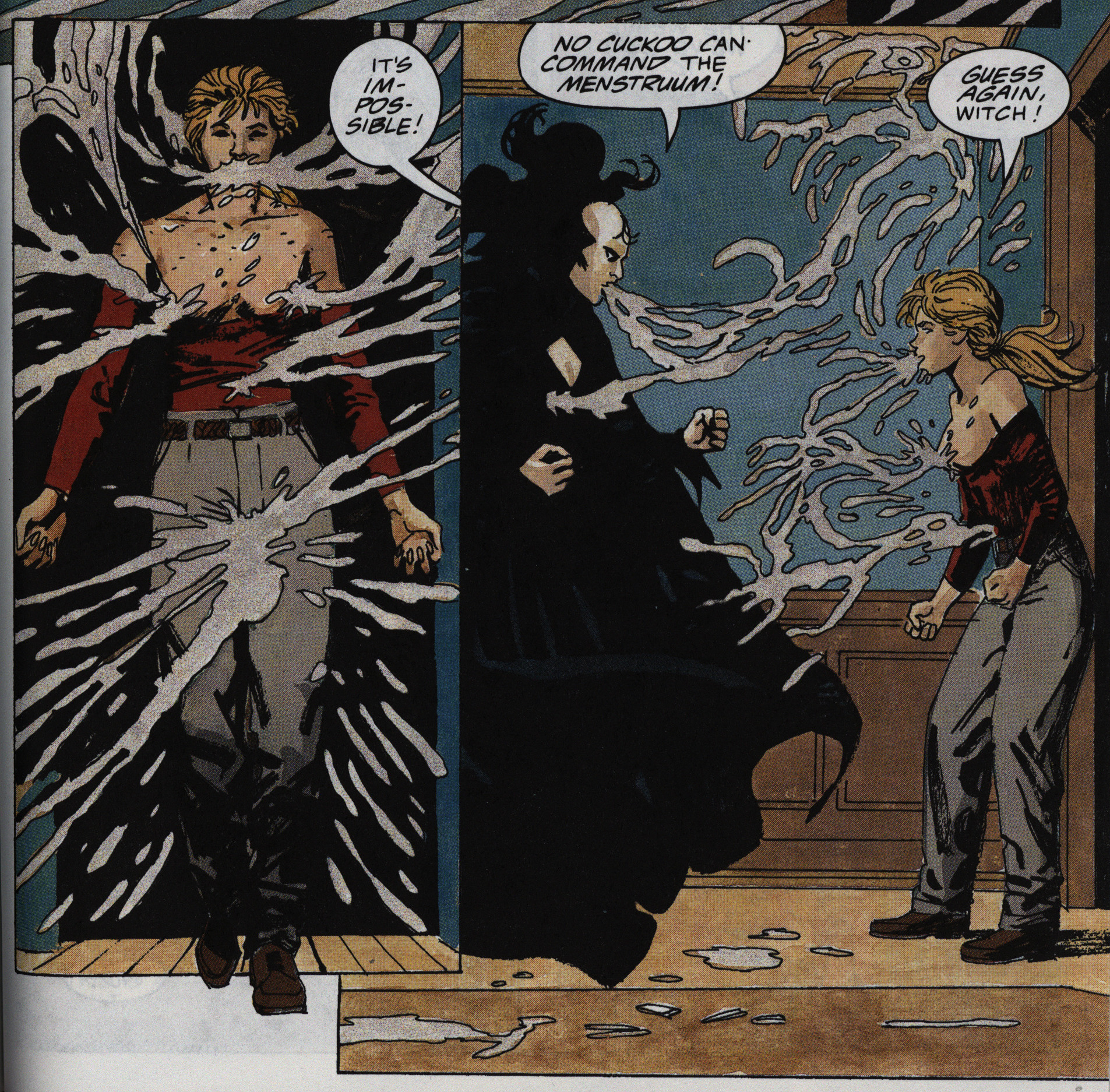 Did I mention that one of the witchy powers is called “the menstruum”? And, yes, it’s emitted from (almost) all orifices. 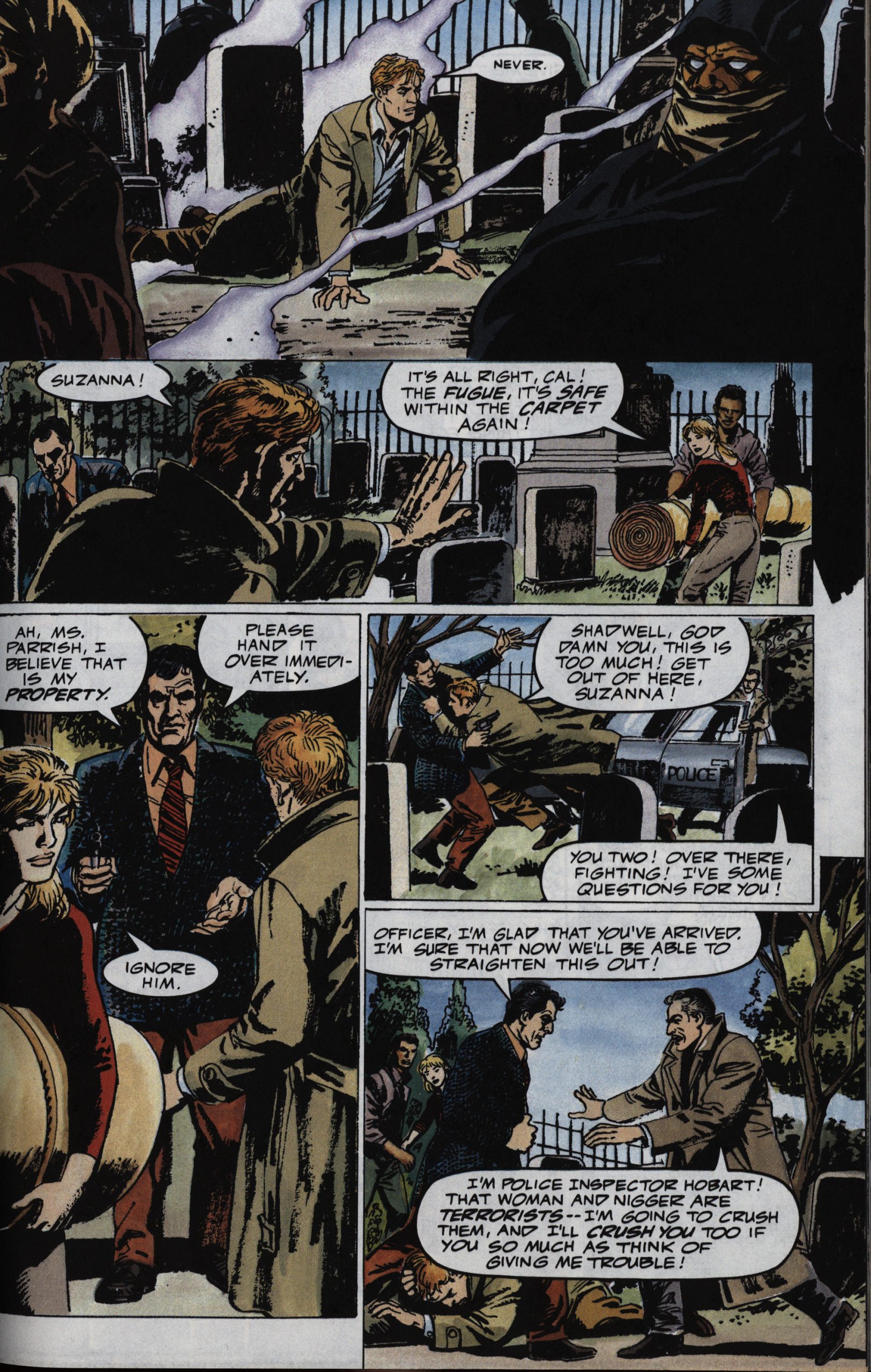 I’m just repeating myself now, but … the storytelling is so choppy. I can’t remember even Classics Illustrated being this badly adapted.

It doesn’t look like this has ever been reprinted?

The graphic novel provides visualization to Barker’s classic fantasy novel. I was impressed by the drawings of some of the events which happened in the book, not exactly as I imagined when I was reading the novel but I could not complain about the gorgeous artwork.

A TV adaptation was mooted a couple years ago:

In the updated, television version of the “Weaveworld” premise, an app designer and a young pastry chef enter a mythological world through a portal in an old Savannah mansion and must join together to fight an epic battle against evil forces attempting to control the magical world. There have been many attempts to adapt the novel over the past two decades but its scope and setting were considered too expensive for television.

But I don’t think that happened? It makes a lot of sense, though: The plot would suit a TV series very well.