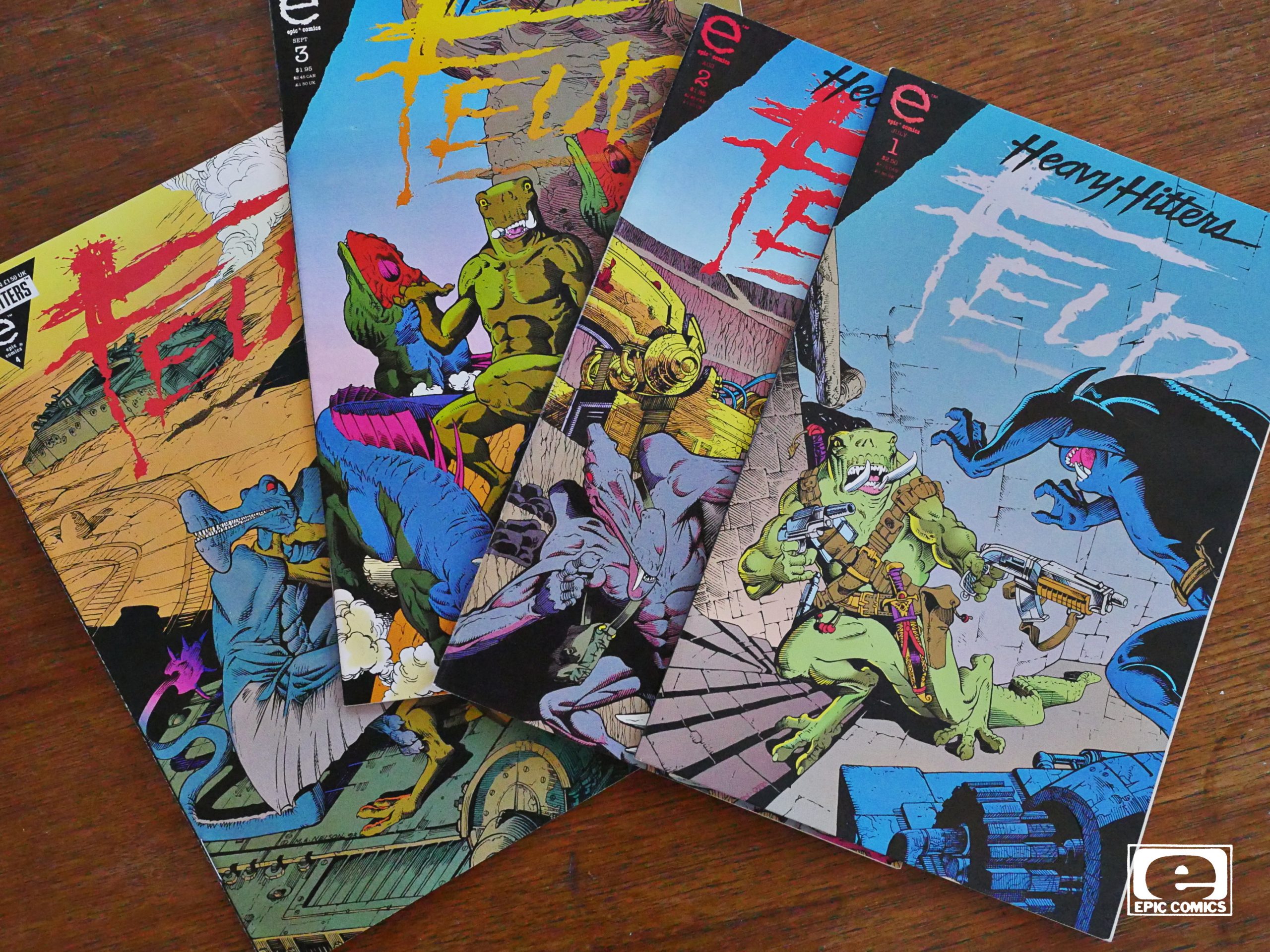 Baron is the writer of Nexus, of course, and the name Mark Nelson sounds familiar, but I’m not sure where from… Did he do stuff for the Eclipse anthologies? 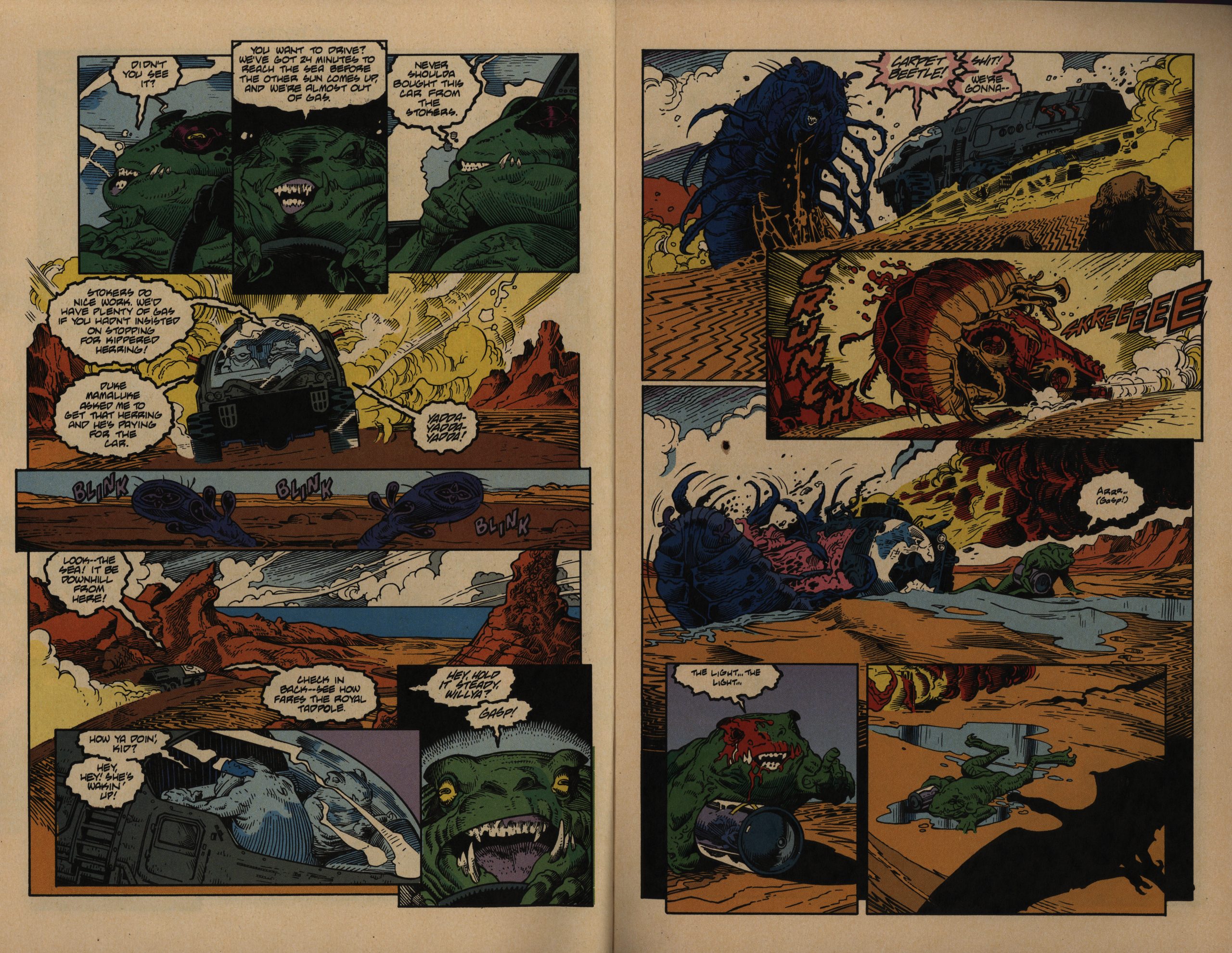 Anyway, with a name like “Feud” I was expecting some kick-ass action (like the Epic ads for the “Heavy Hitters” line-up promised). And, indeed, there’s action, but there’s no humans in sight, and it’s a comedy of sorts.

And go-to comedy element number one is always having somebody talk with a lisp. *sigh* I can’t really express how annoying I find reading this stuff at length, so I’m not even going to try.

They do use this as a plot element later in the series, so I guess that’s better than usual. 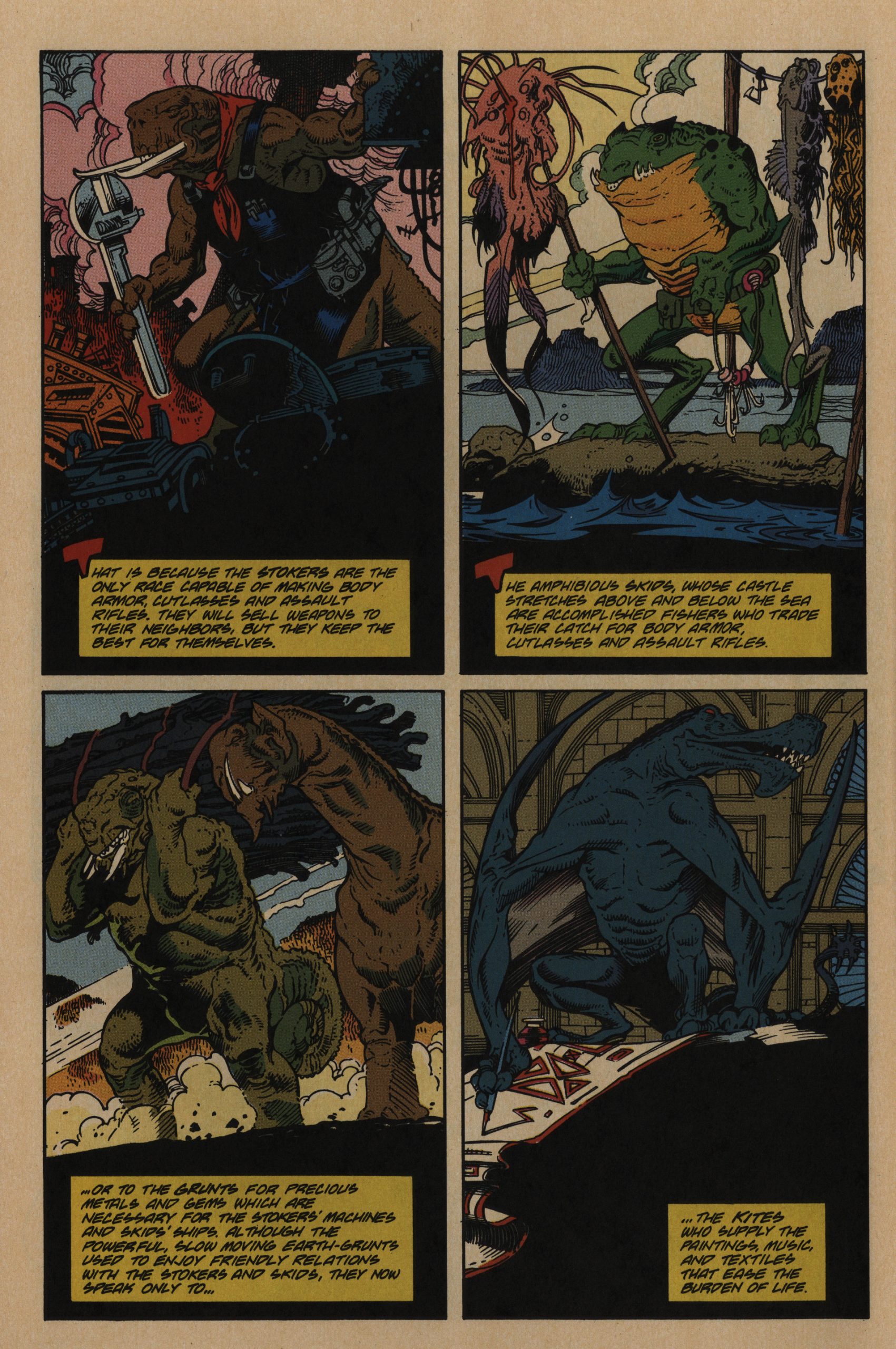 In any case, this is a surprisingly complex little story. We’ve got four different species, mutually dependent on each other, but also constantly in conflict with each other. It’s an interesting setup, rife with possibilities that are, indeed, used to good effect. It’s a good story. 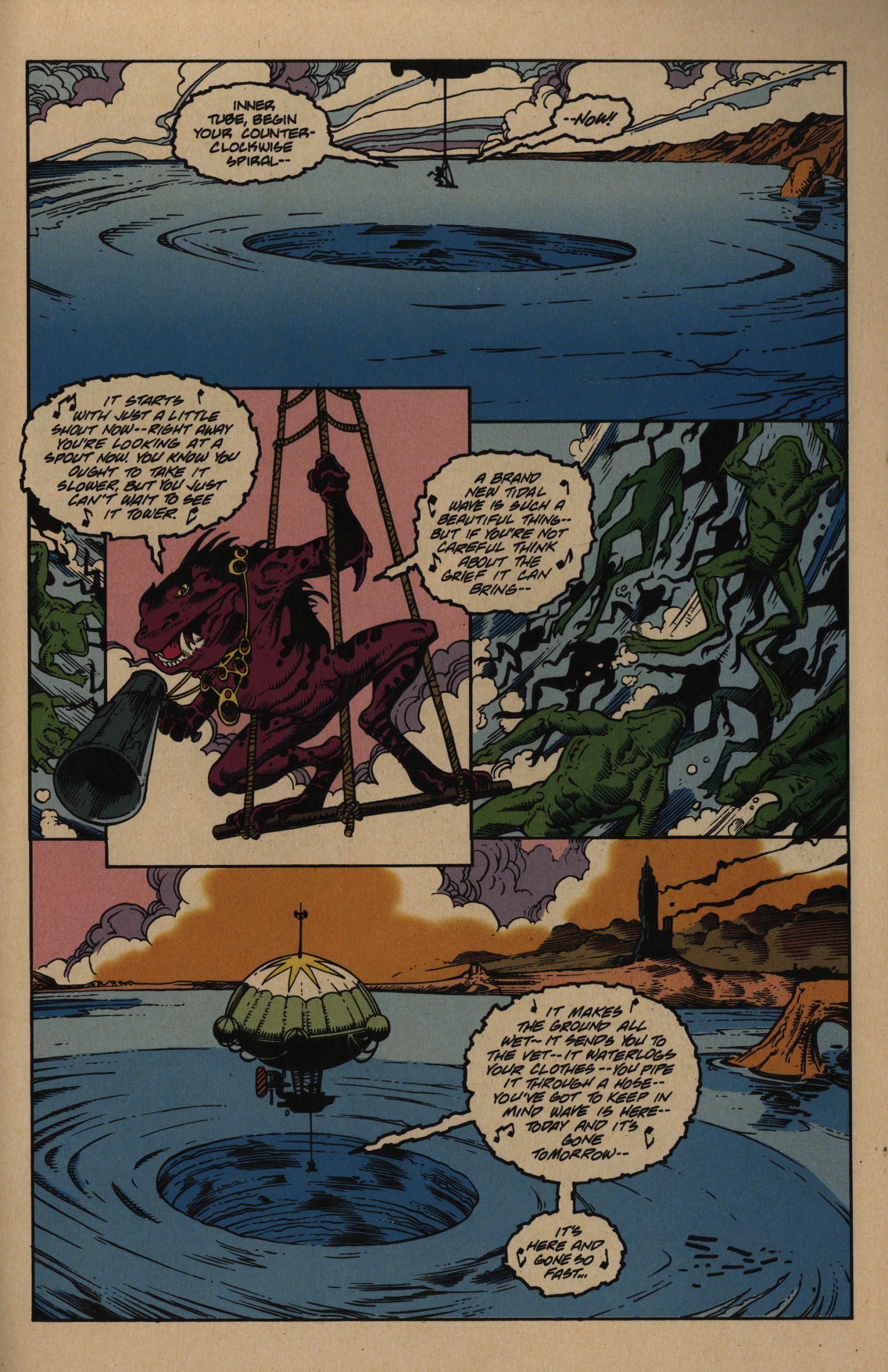 But I guess I can take or leave schticks like having the frog species swimming really fast to create a tsunami. I mean… it’s fun? But… 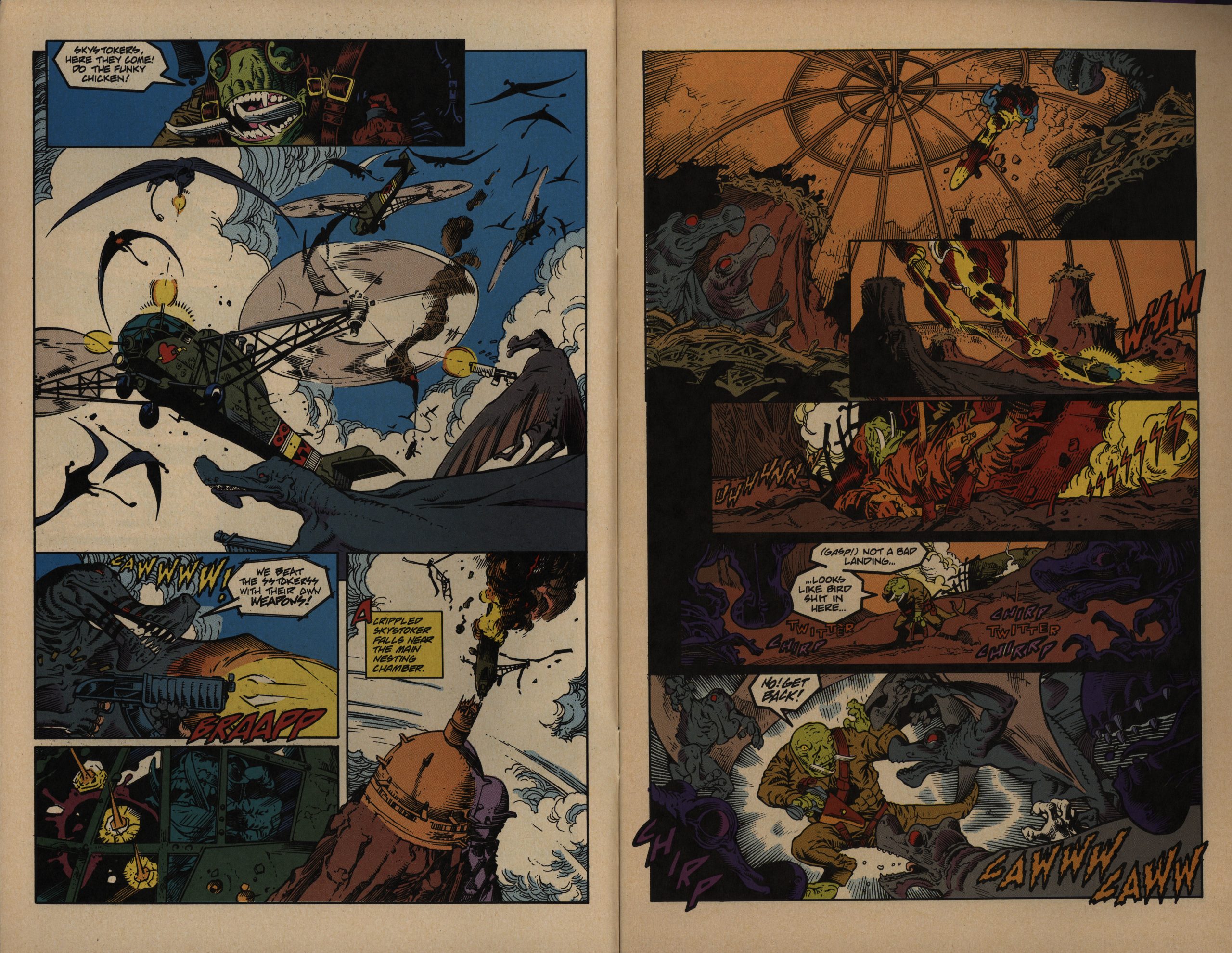 Nelson’s artwork is attractive, but his action scenes (and there’s a lot of them) are often less than exciting. I mean, individually, these panels are great: Look at those copters! Look at that ptero guy firing that gun! Great! But combined it doesn’t quite flow, I think? 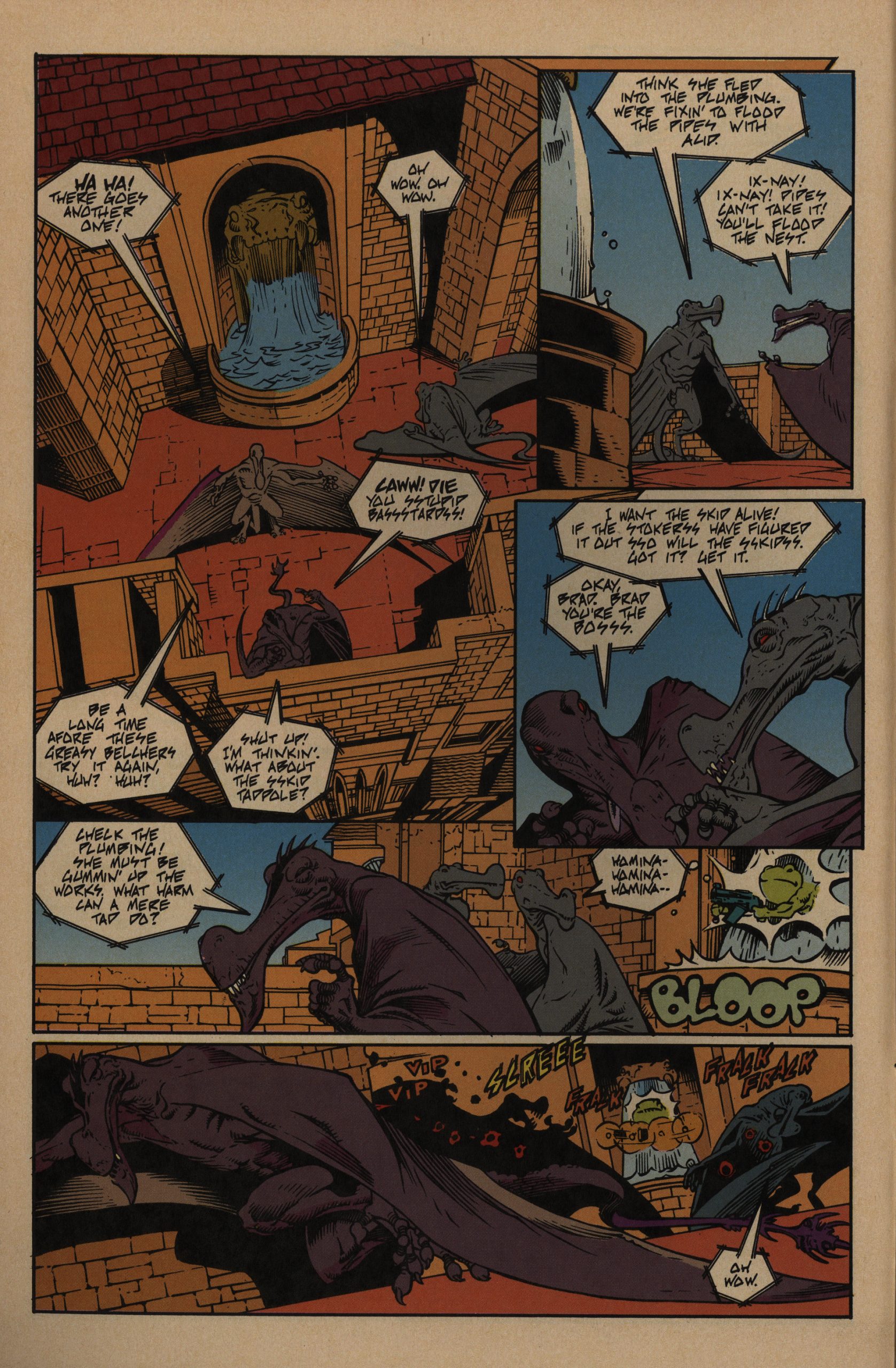 The major problem is that Nelson commit hard to these species, meaning that the facial expressions are sometimes hard to read, and it’s difficult to keep the individual characters separate. For instance, above the head honcho, Brad, is the one with those subtle spikes on top. In most of the panels he’s purple, but then the colourist goofs and switches the colours. Presumably because he couldn’t really keep them apart, either. 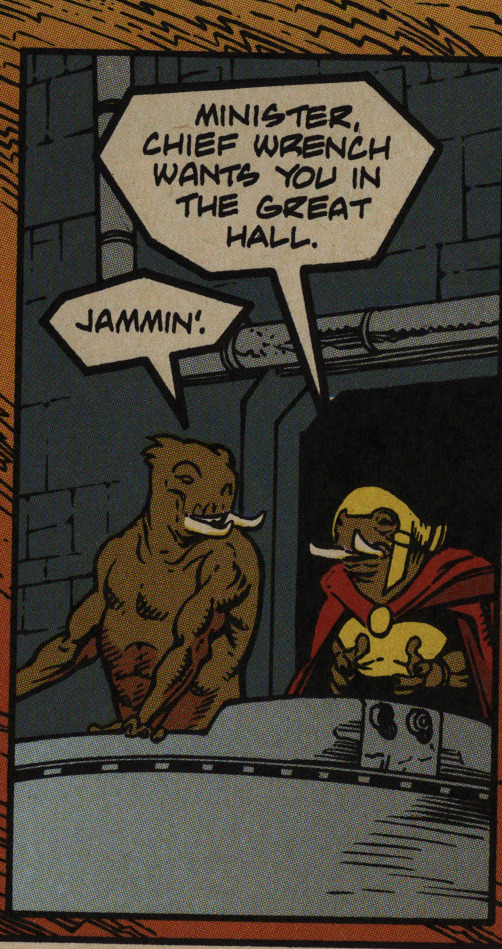 It is funny, though. 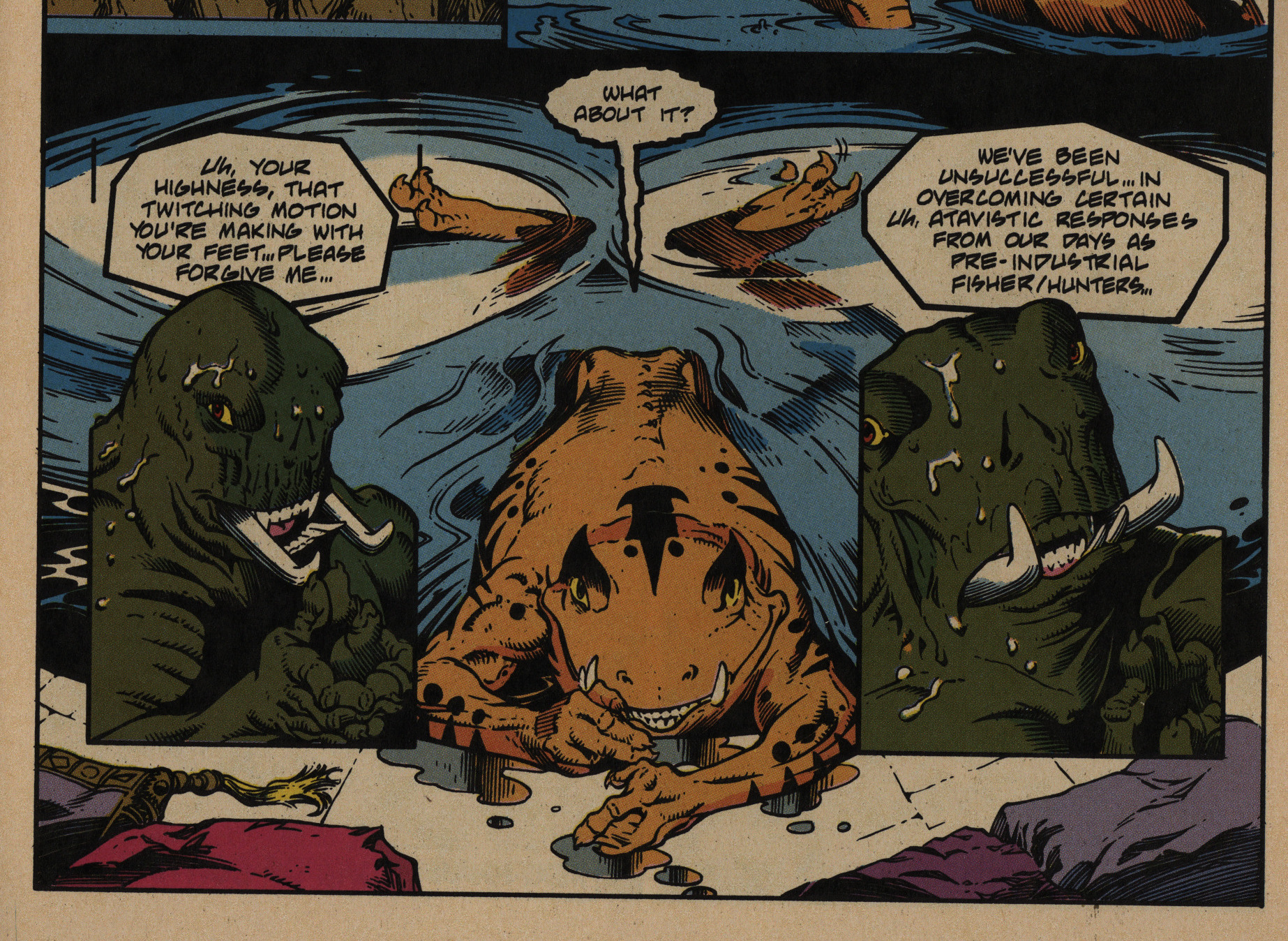 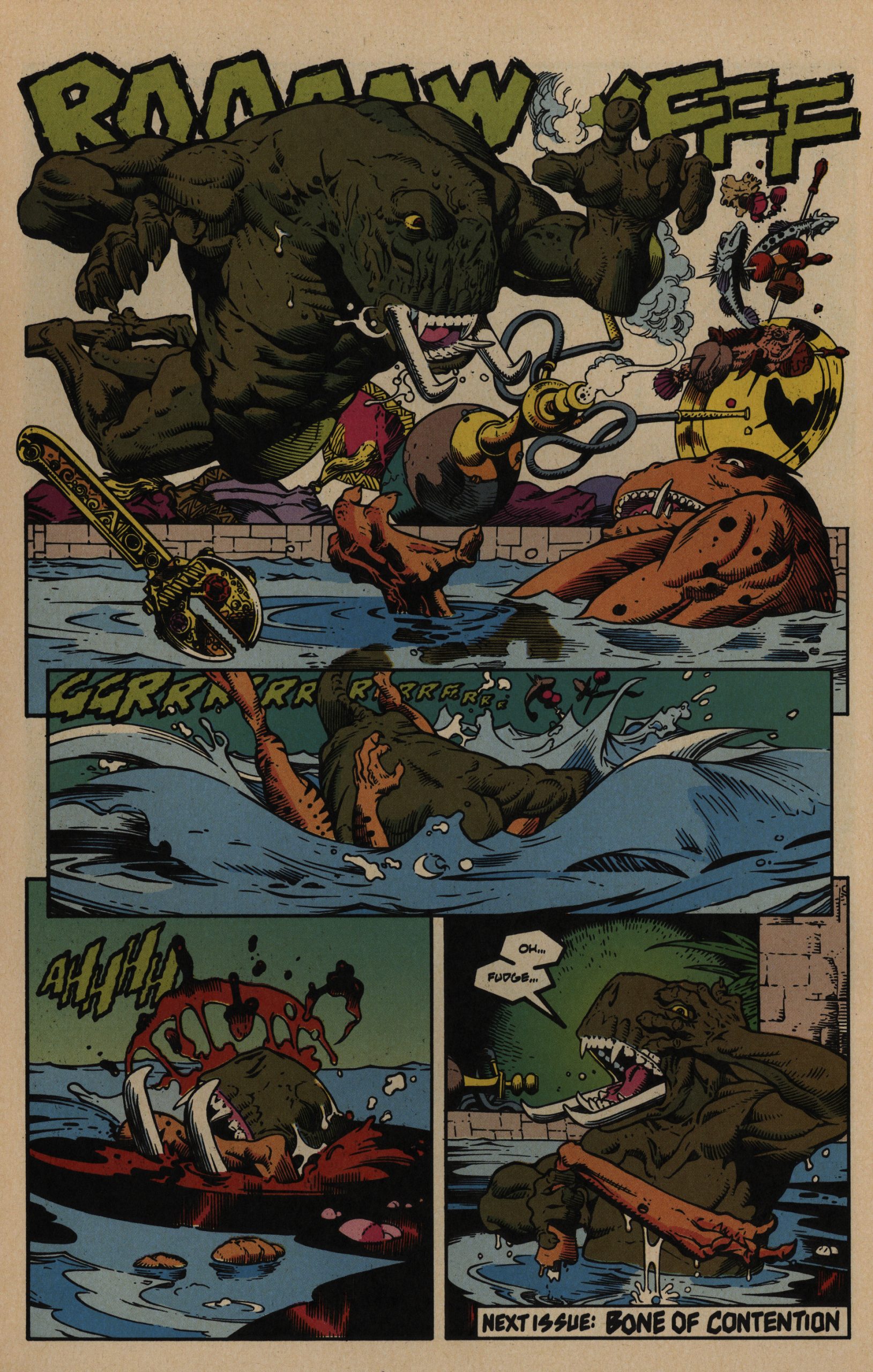 But Baron’s go-to edge lord sense of humour makes it difficult to care about the characters, and subsequently care about the plot: Having the reptile leader suddenly kill and eat the frog leader (because she moved around too much; instinct you know) sure is a knee slapper. 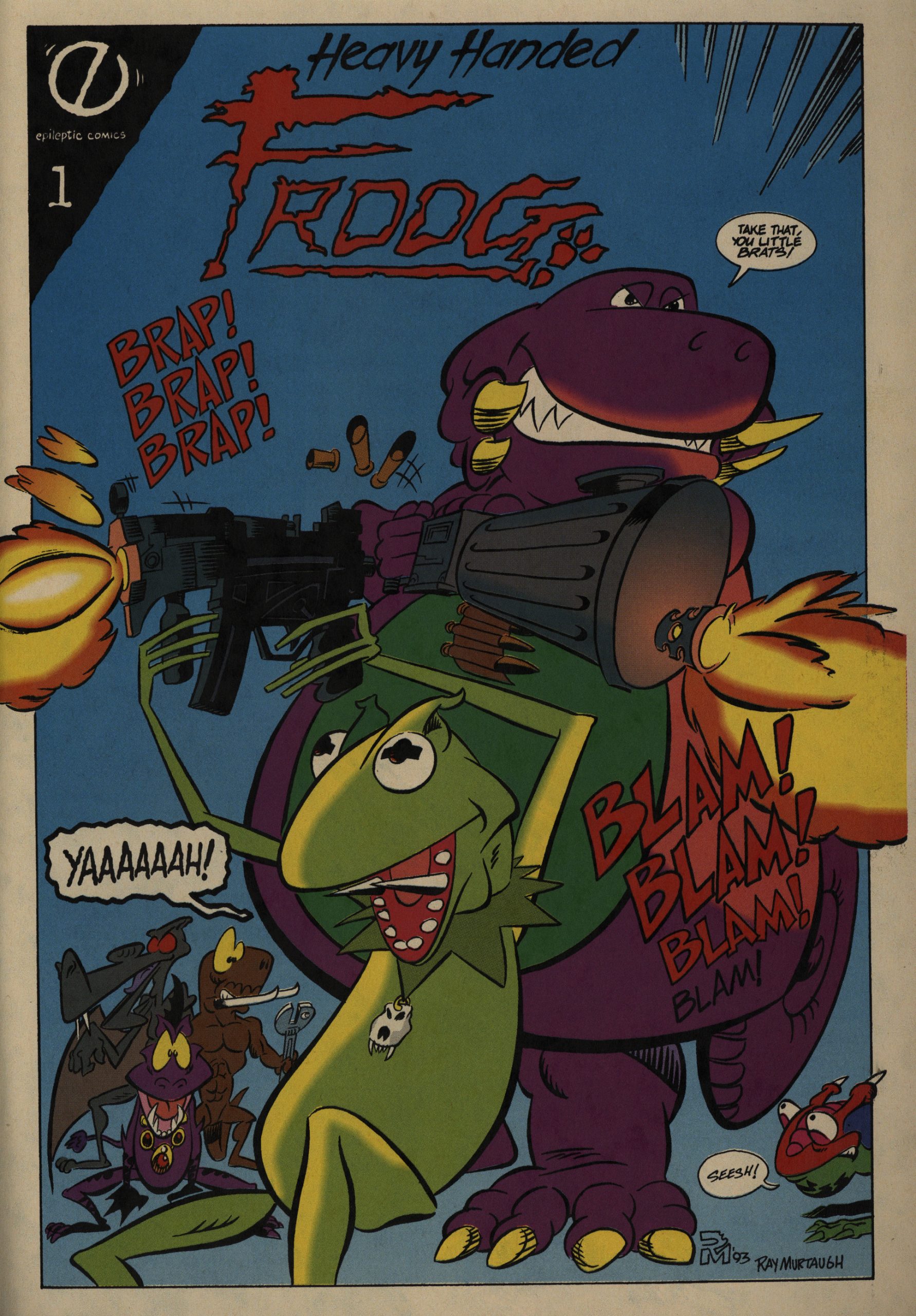 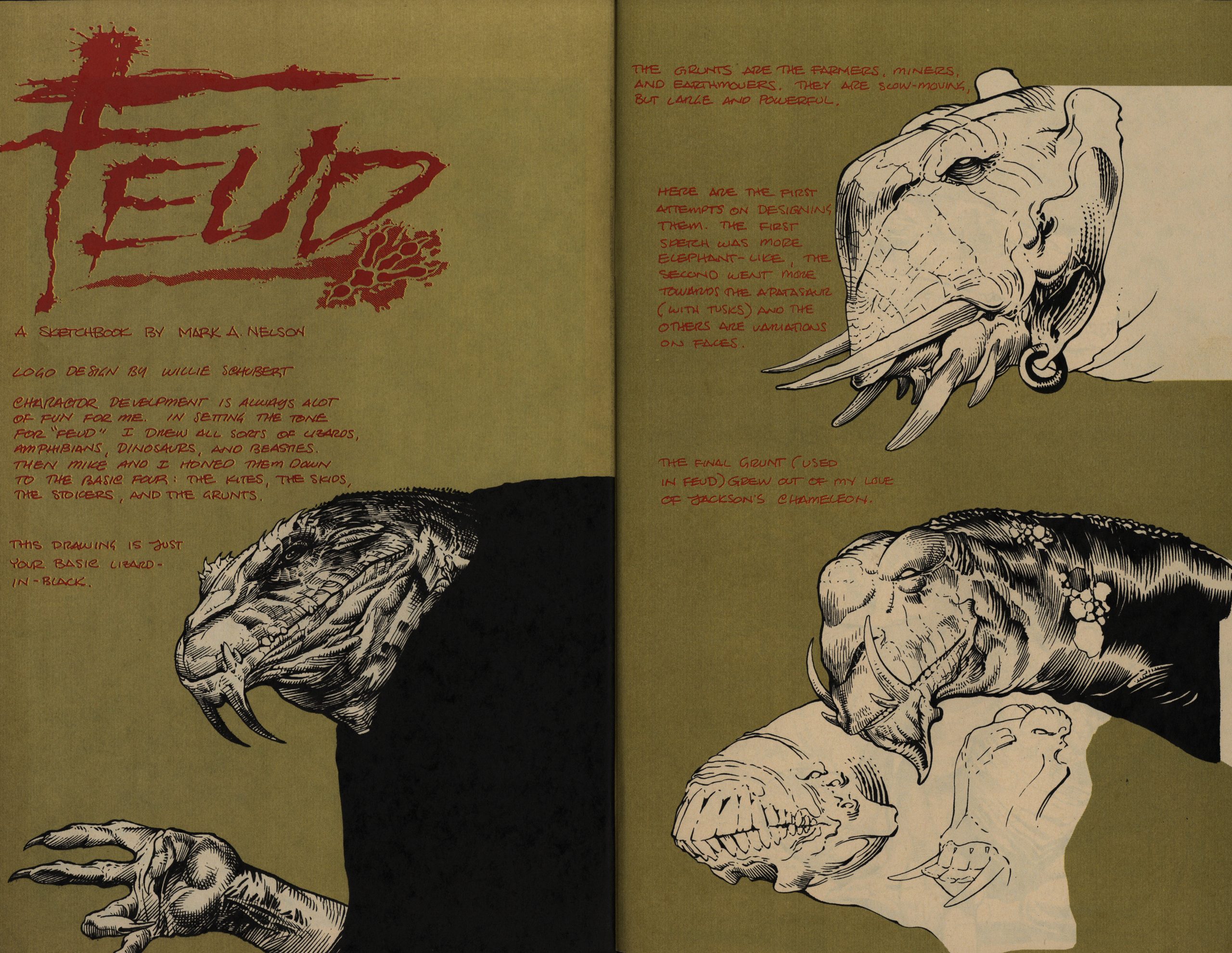 In the final issue, we get a bunch of process pages from Nelson.

This series has never been collected or published, which I think is surprising. These are moderately big names, and it’s a completely standalone work… and it’s pretty good.

This person liked it, too:

The sheer audacity required to create an anthropomorphic political thriller like this is incredible. The very fact that Baron & Nelson even decided to tackle a comic like this should be rewarded. But, the real reward goes to the reader: They pulled it off! Tons of humor and action keep this series moving along as you find yourself actually caring about these imaginary reptilian creatures.

Looking back at it now, it almost sounds like one of those convention pitches or new series proposals that veer straight into horror-story territory: a writer or artist will try to sell a world that has sixty pages of backstory before the plot even starts.