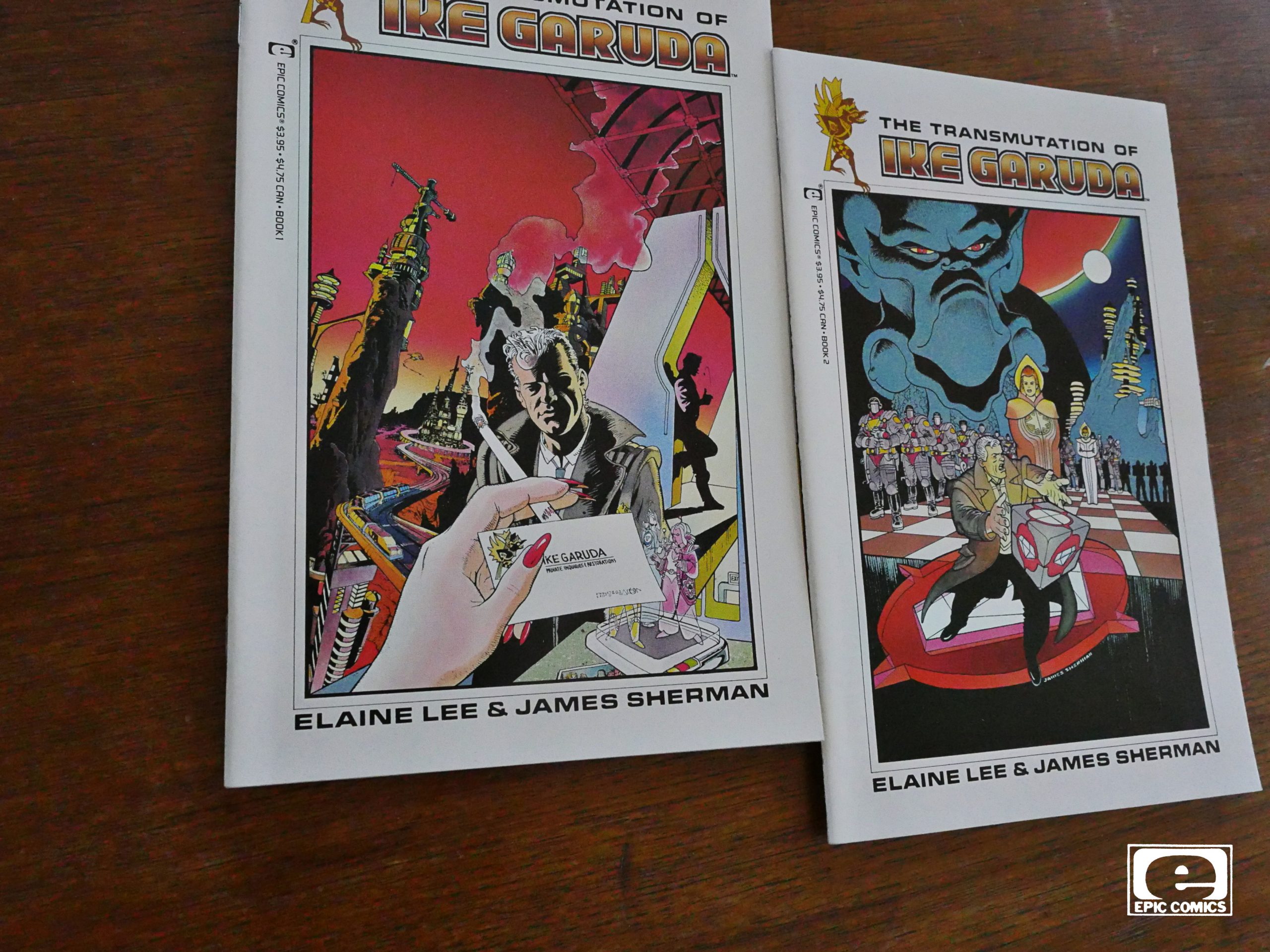 This is one of the few Epic comics from this era that I’ve read before… but I read them just a few months ago, before starting this blogging project, and they were probably what pushed me over the edge into actually (re-)reading all the Epic comics: If Epic had published something as wonderful as this without me knowing, what other treasures would be hidden in their catalogue? 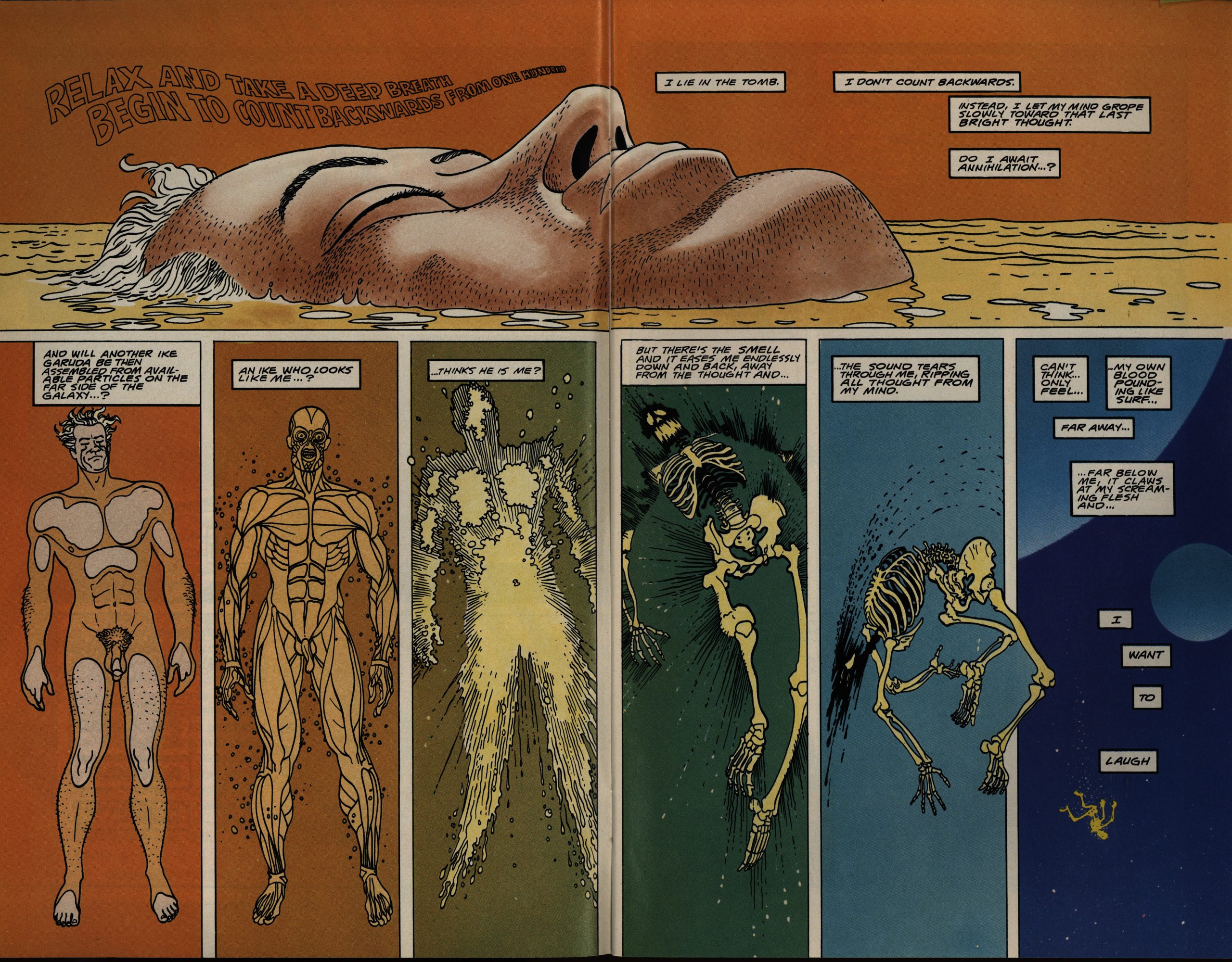 Elaine Lee is, of course, the writer of Starstruck, but I’ve haven’t really read anything else she’s done, and for all I knew, perhaps Starstruck was an outlier and her other work would turn out to be naff? So this was a huge joy to read, because it’s awesome. 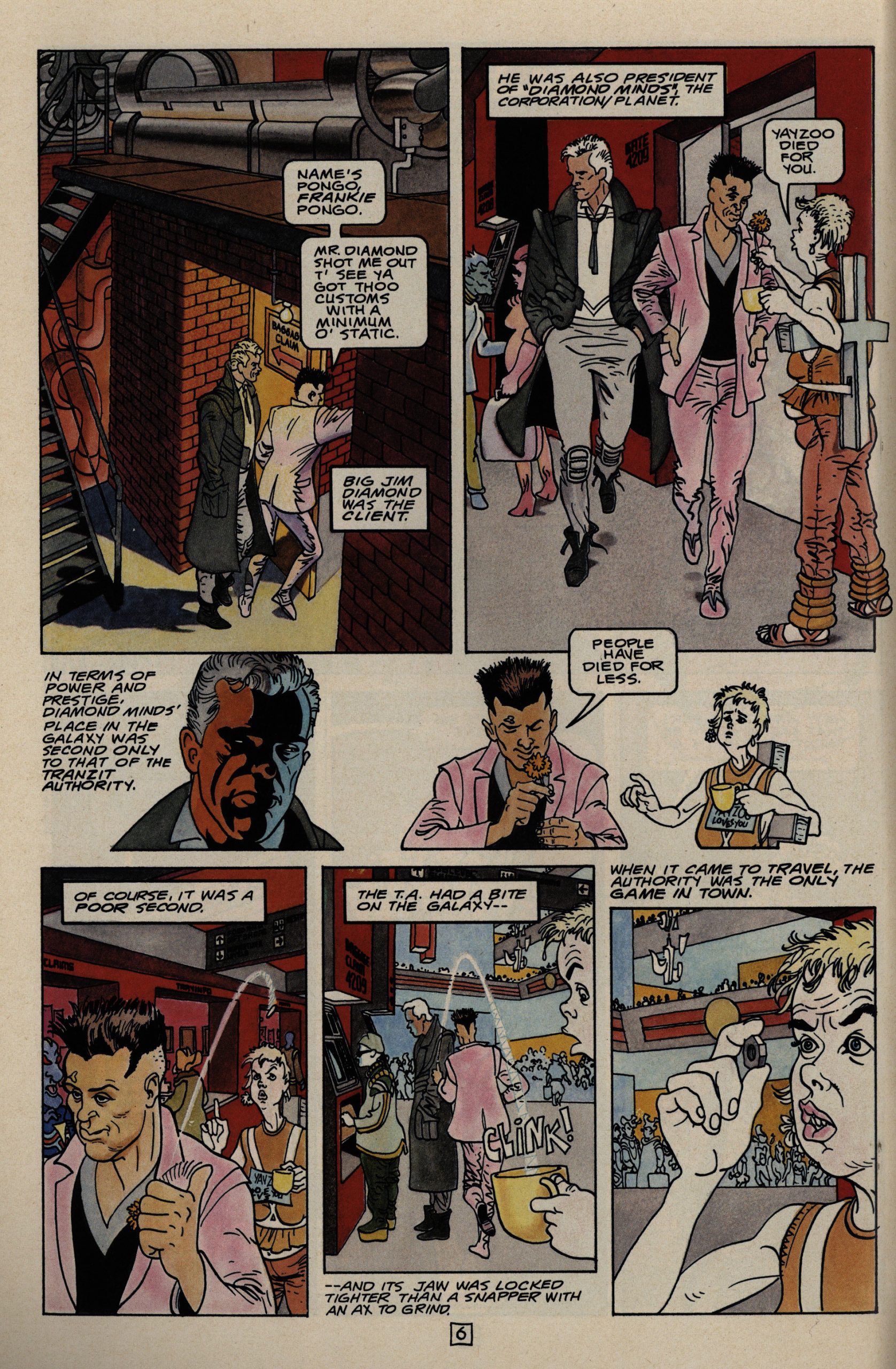 This is a science fiction slash hard boiled detective story, which isn’t an unusual genre crossover, but Lee (and Sherman) does it so perfectly. The storyline is so dense that it feels like it’ll curl into a black hole at times — there’s not a single wasted page here (over this 2x 48 page series). We get the traditional hard-boiled voice-over captions, while things never stop happening at the same time. 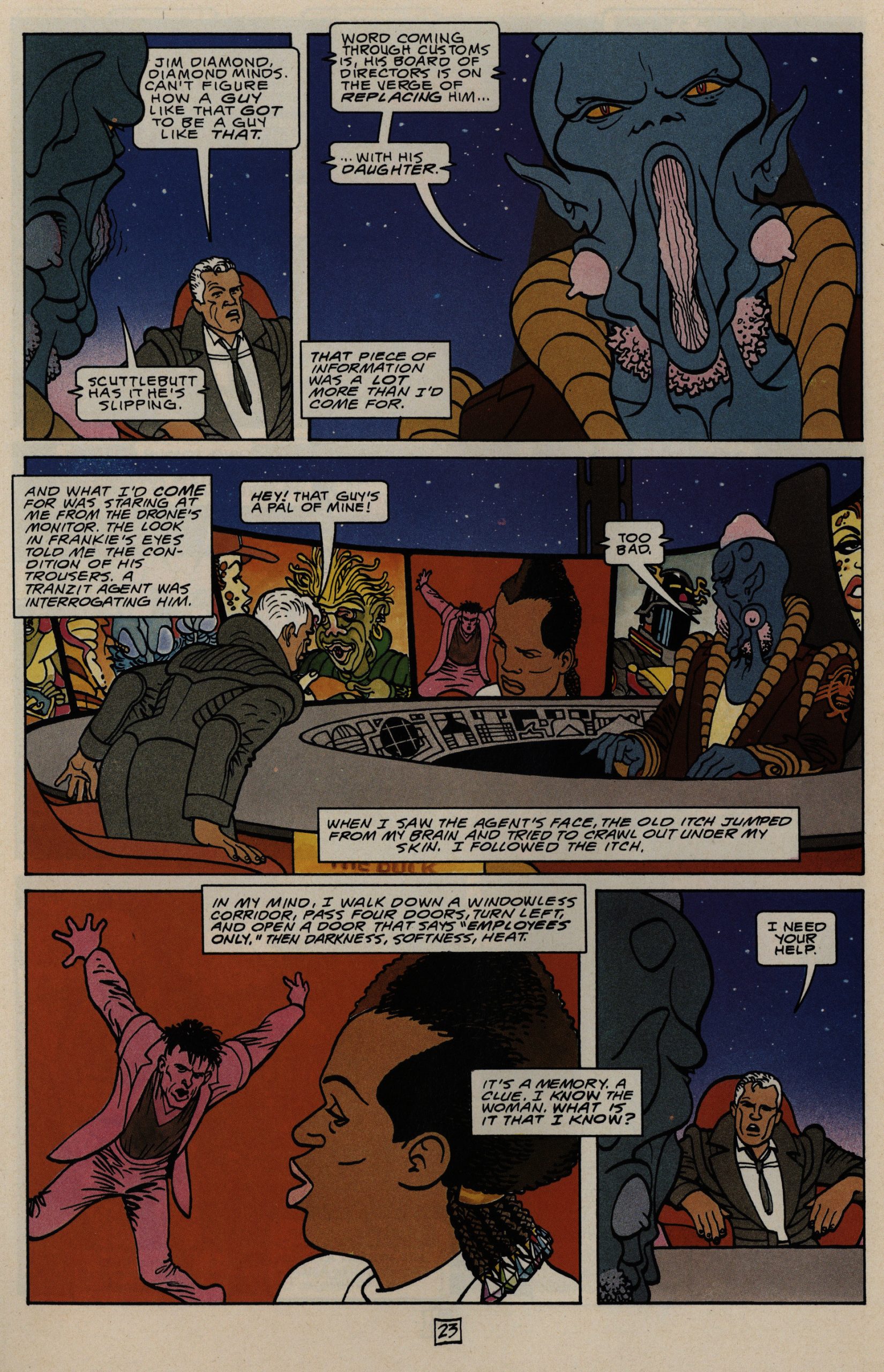 OK, perhaps things get a bit reliant on coincidences at times, but that’s also a genre trope: Is it coincidence or conspiracy? The thing is, when doing something as convoluted as this, if you lose the reader’s confidence that this is all going to come together for a second, everything just turns into a boring slog, but the creators here have pitch perfect control of everything.

I’m not familiar with James Sherman — he seems to just have done an issue here and there, but this seems to be the only stand-alone project he’s done. And I think he does this marvellously: He’s obviously been peeking a bit at some Moebius comics, but also at British artists, I think?

There are so many characters here, and there’s double identities and erased memories, but he has an amazing ability to make characters that are readily discernible so that there’s no extra confusion just because of that. I know that that seems like a minimum requirement for a comic artist, but there’s a tendency among artists to just have a handful of facial features at hand, so if you have, say, ten characters, they start looking very similar. Sherman navigates it all perfectly. 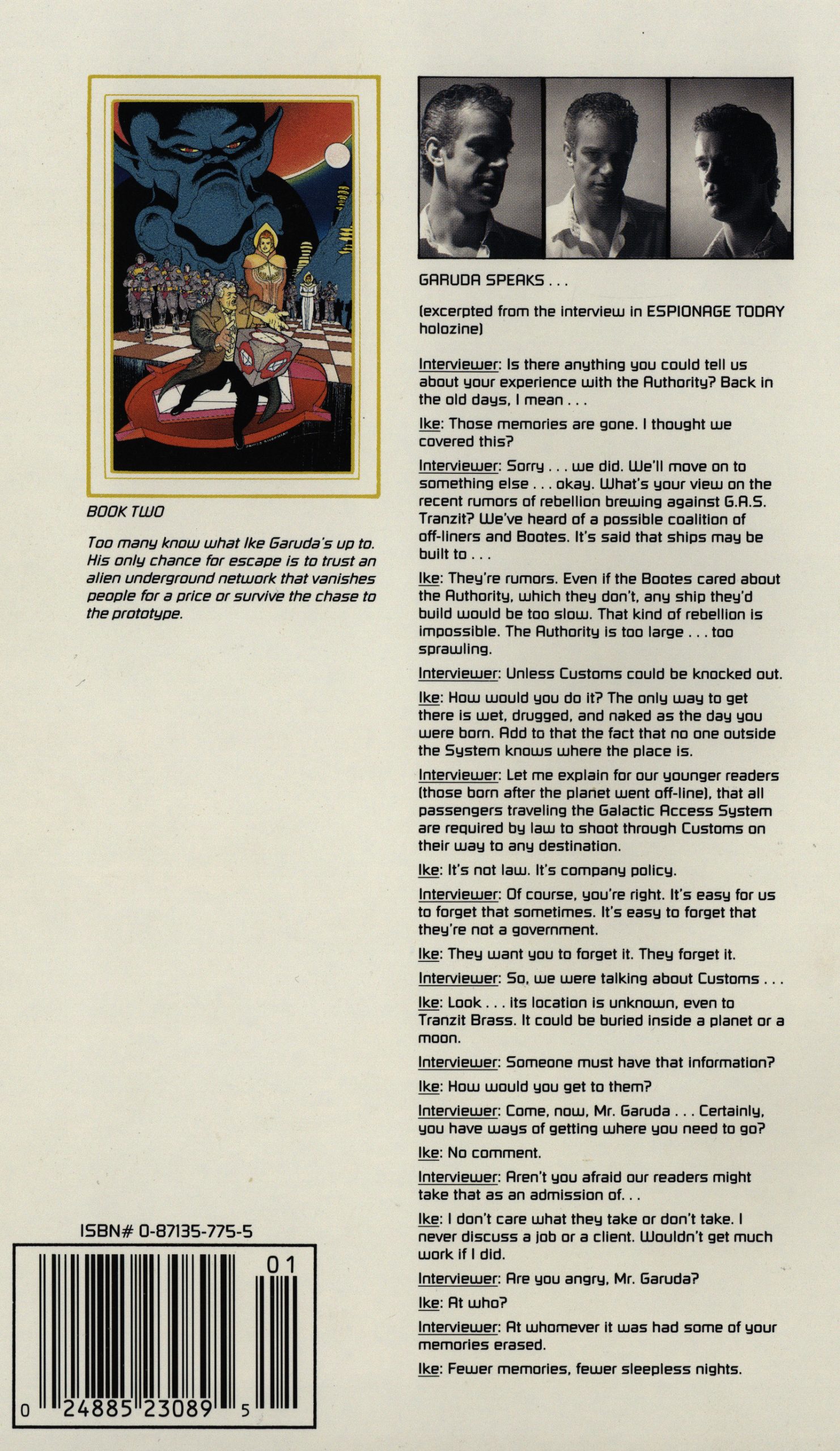 It wouldn’t be an Elaine Lee comic without some text features, eh? 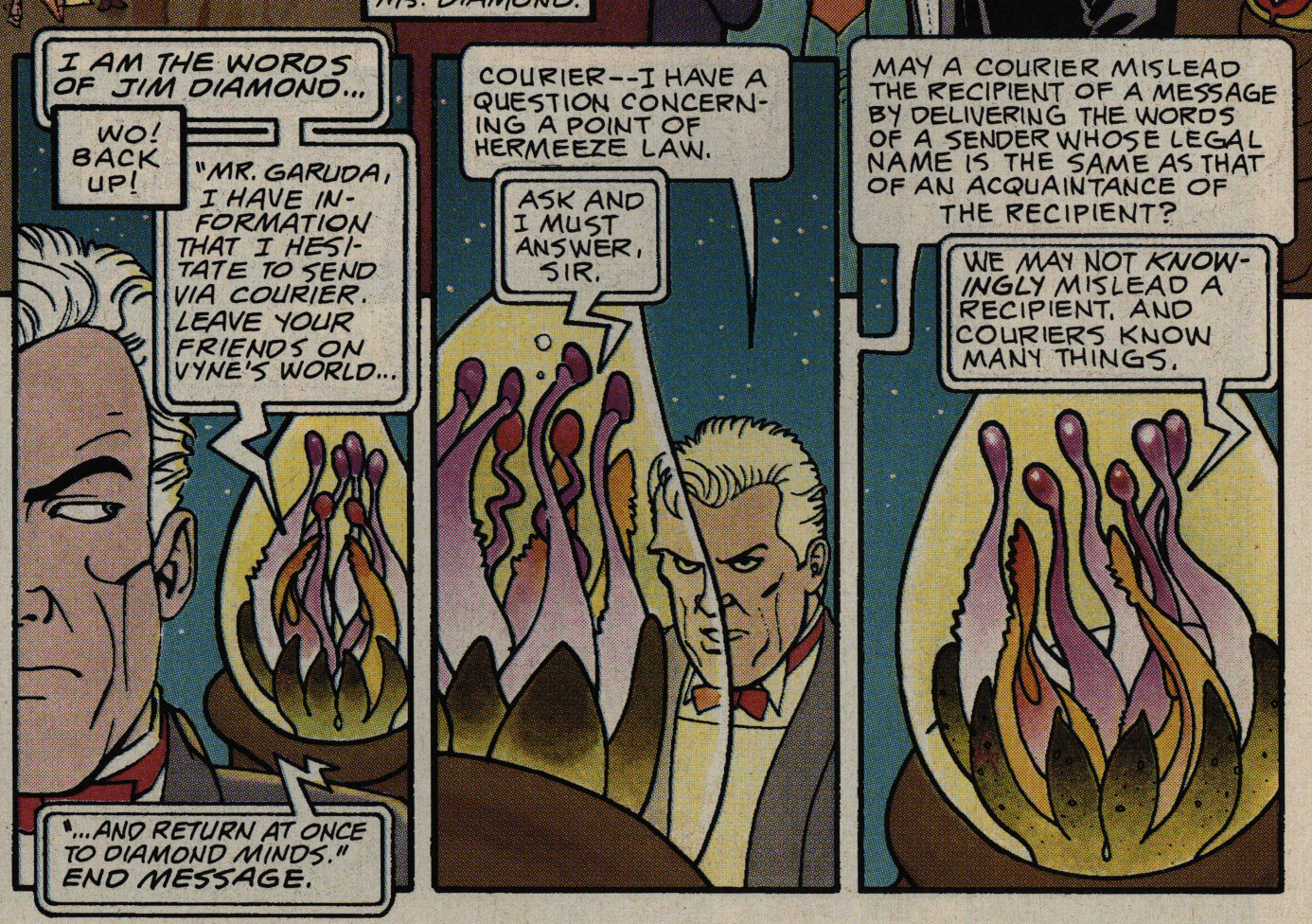 This comic won’t be everybody’s cup of tea. If the exchange above thrills you, then hie thee to Ebay and get buying. If instead you’re going “uh… dur… I eat paste…” then perhaps not. 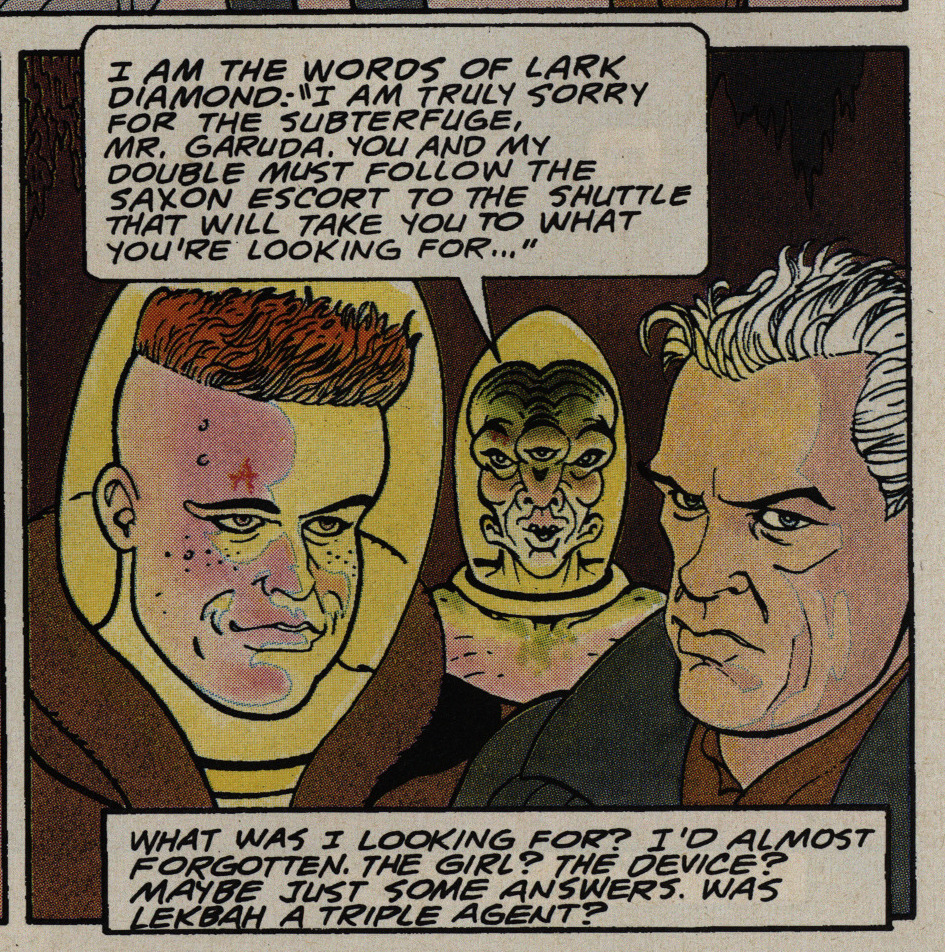 Or perhaps a quintuple agent!?

Anyway, I loved this book even more the second time I read it, and that’s saying a lot, because I loved it to bits the first time around. Reading it is… thrilling.

The book has never been reprinted or collected (SHAME! SHAME!), but it has to have some loving fans. You can tell just by its Wikipedia page.

I was unable to find contemporaneous reviews of this book, and (as usual for Epic mini-series), there’s not a lot on the interwebs either:

This is a extravagantly meaty read for its two books totaling 96 pages- the amount of ins, outs and every other direction you can imagine cause this to take an eternity to read if you need to understand every detail.

Well, I think I know what I have to do: I have to buy everything that Elaine Lee has written. She seems to have had an interesting career, too… Oh, and perhaps this bibliography would also be useful for tracking down her stuff, which seems to be scattered over a bunch of smaller projects.