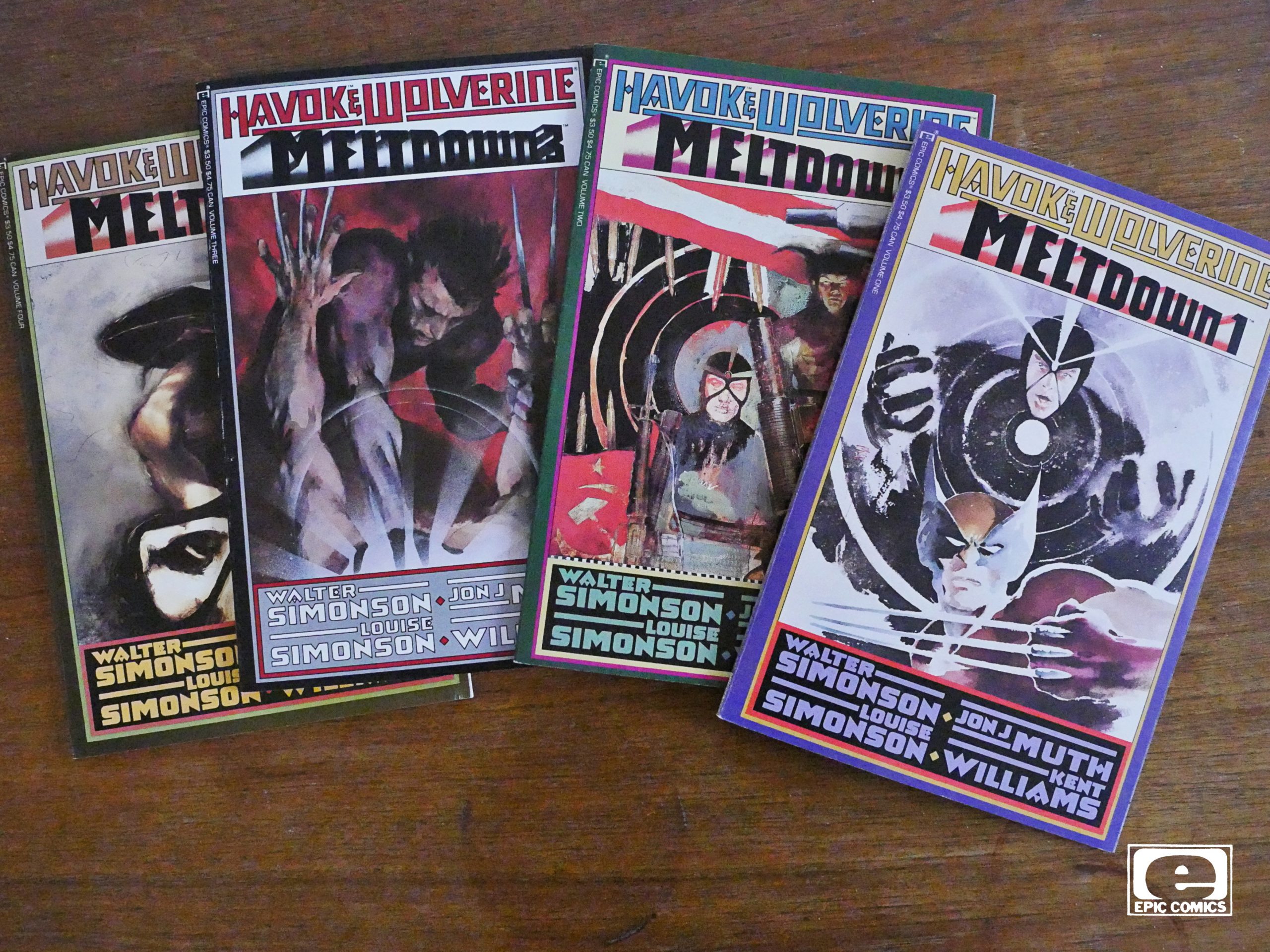 Marvel experimented with doing a few more upscale Epic books featuring Marvel characters, and I still don’t quite understand the logic. Surely these books would have sold better if they’d have the “Marvel” logo on the covers? Was the point to use these as a way to bring more attention to the other Epic books; enticing Marvel fans to buy Stray Toasters by publishing an X-Men spinoff in the same format? 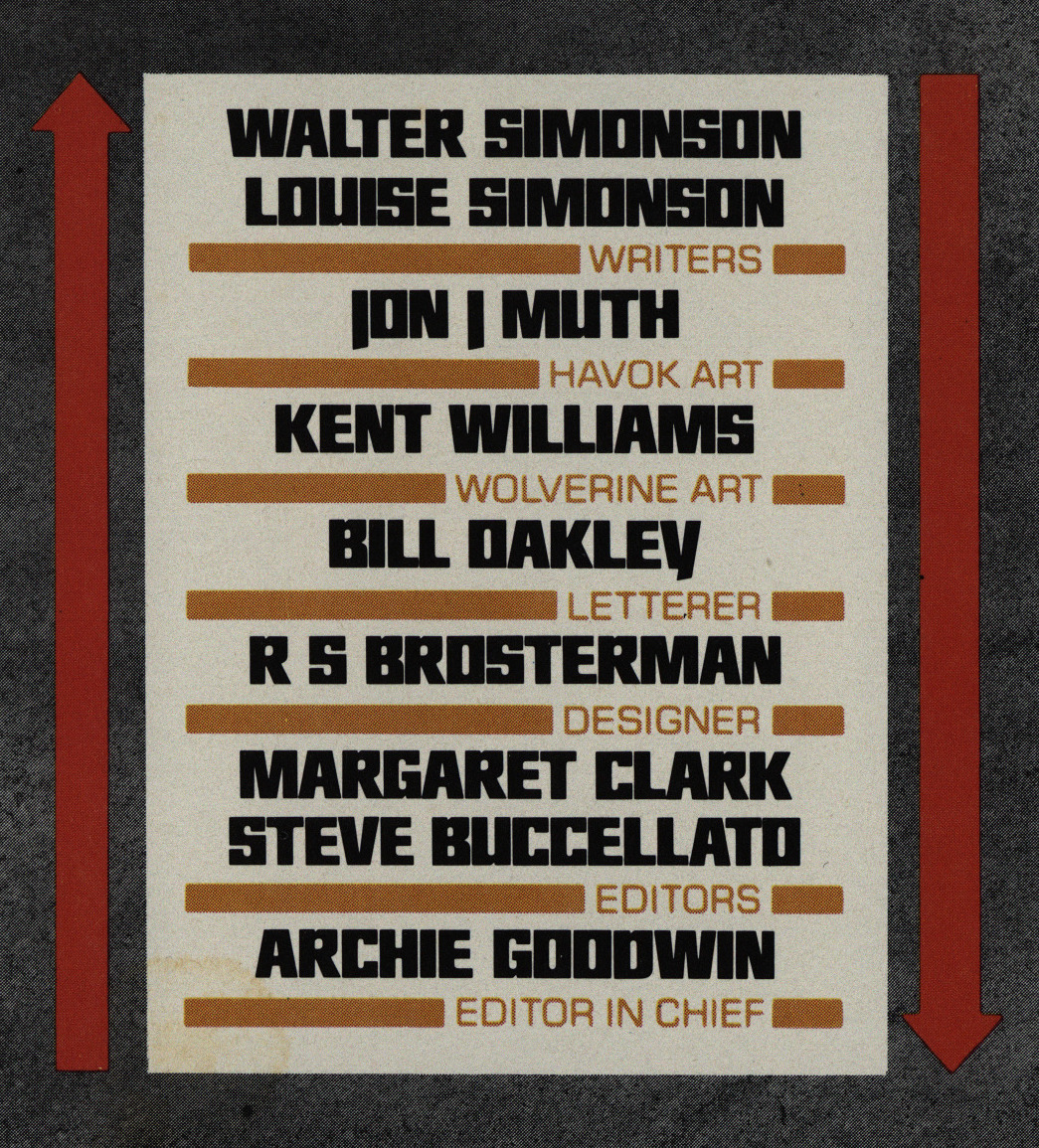 Whatever the reasoning, this would seem to be (conceptually) the most perfect Marvel/Epic crossover book: It’s got writers with impeccable Marvel credentials, and the artwork is done by two of the most accomplished creators of painted artwork that Epic had employed (Muth, for instance, on the much-lauded Moonshadow series and Williams on, for instance, the less lauded Blood: A Tale series).

The odd thing here is that the artists are apparently not cooperating, but instead drawing separate scenes? Muth is doing the Havok scenes and Williams is doing the Wolverine scenes. How’s that going to work out? 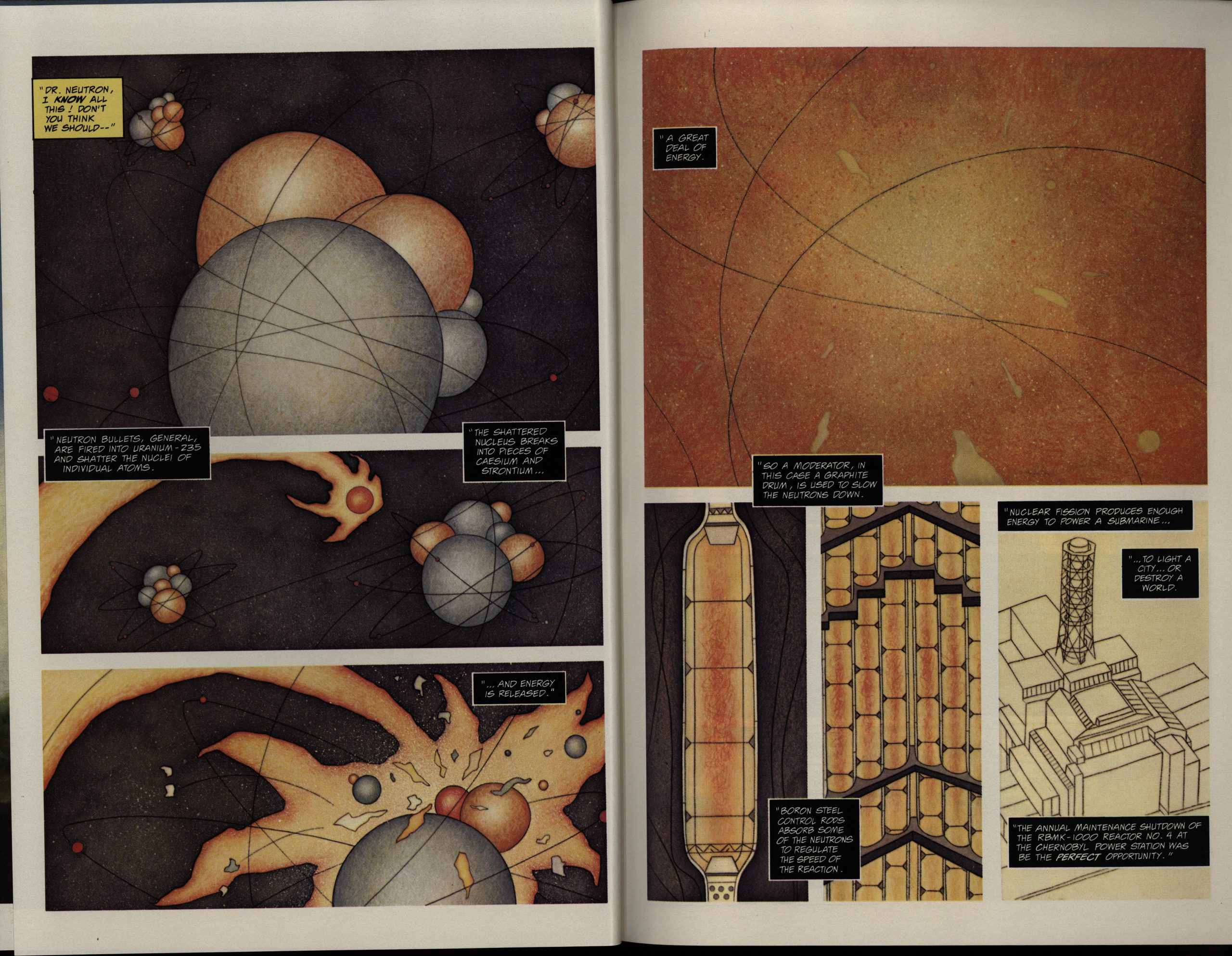 And even more oddly, among the first few pages we get a spread by Sherilyn VanVankenburg. 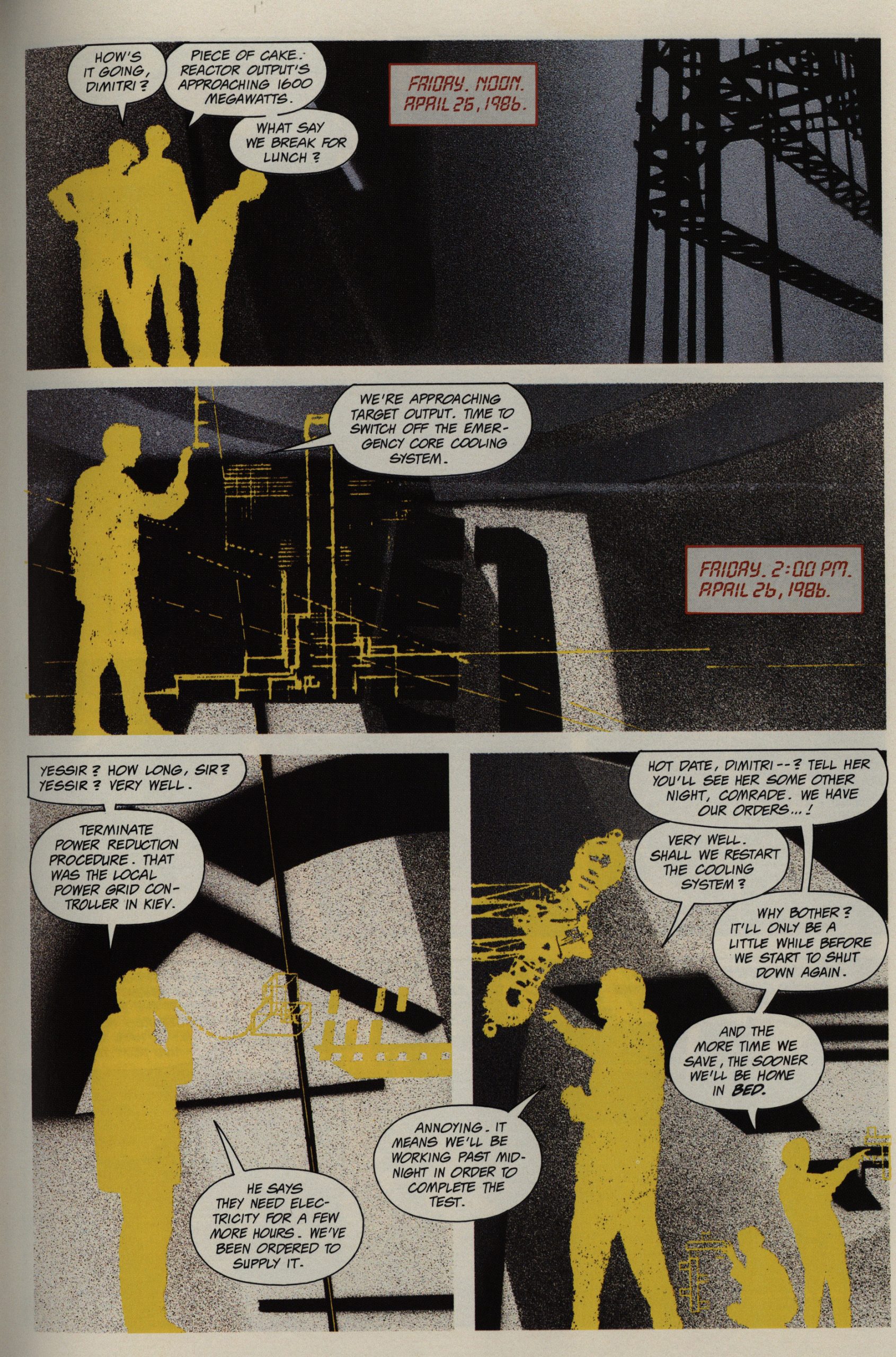 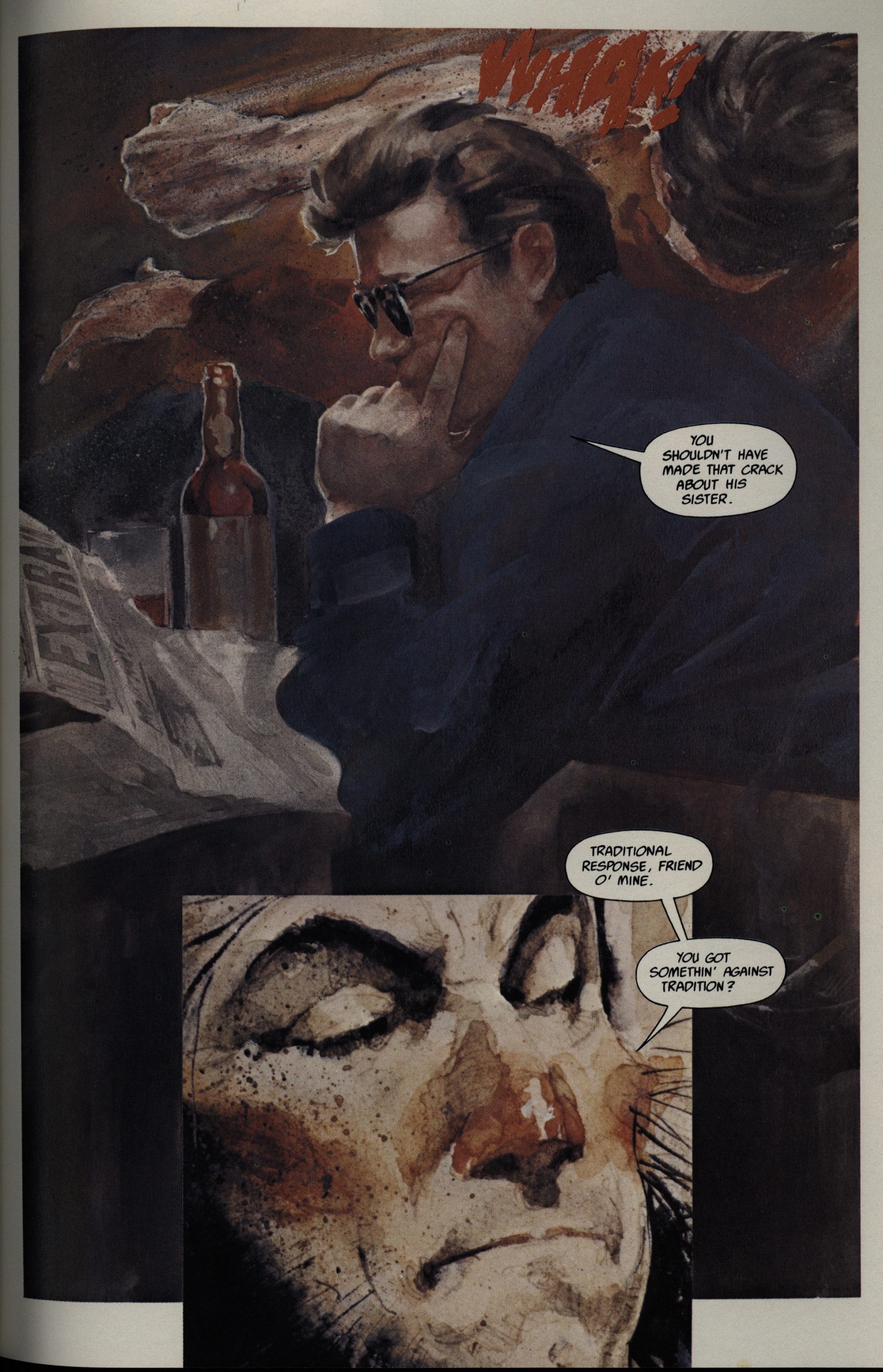 I didn’t know whether Muth and Williams would strictly keep drawing their “own” characters, but… I think the inset is by Williams and the Havok panel is by Muth? 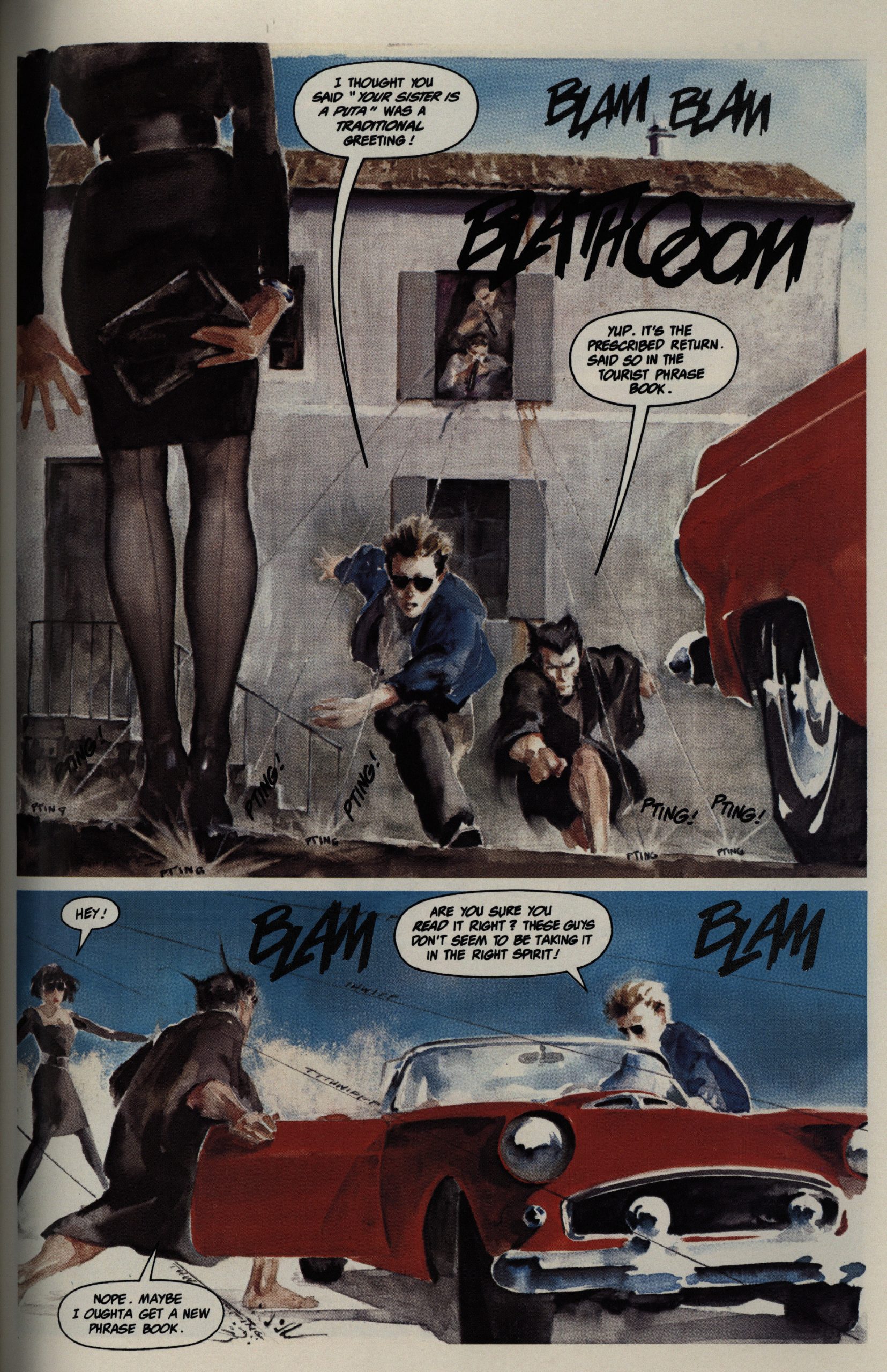 But this must by all Muth, I think? Anyway, Muth’s artwork does display some of the common problems with fully painted characters: They look a little less dynamic than super-heroes should do. I little stiff? But it’s pretty fun. 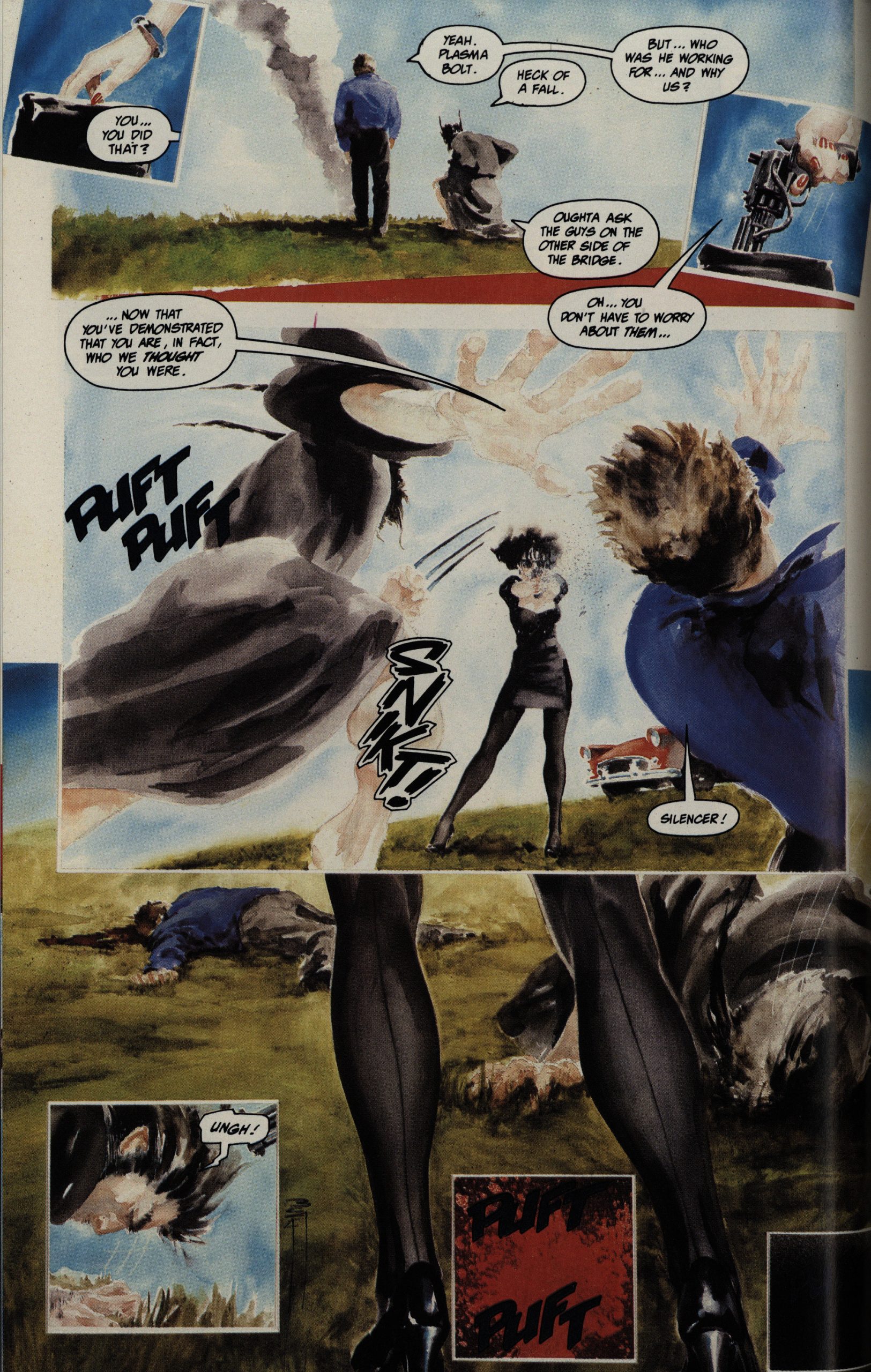 The main problem with the storytelling is actually the speech balloon placement. Way too often the tails seem to point to the wrong character, or are ambiguous. (It’s the woman saying “now that you’ve demonstrated” etc.)

It makes for choppy reading when you have to backtrack. 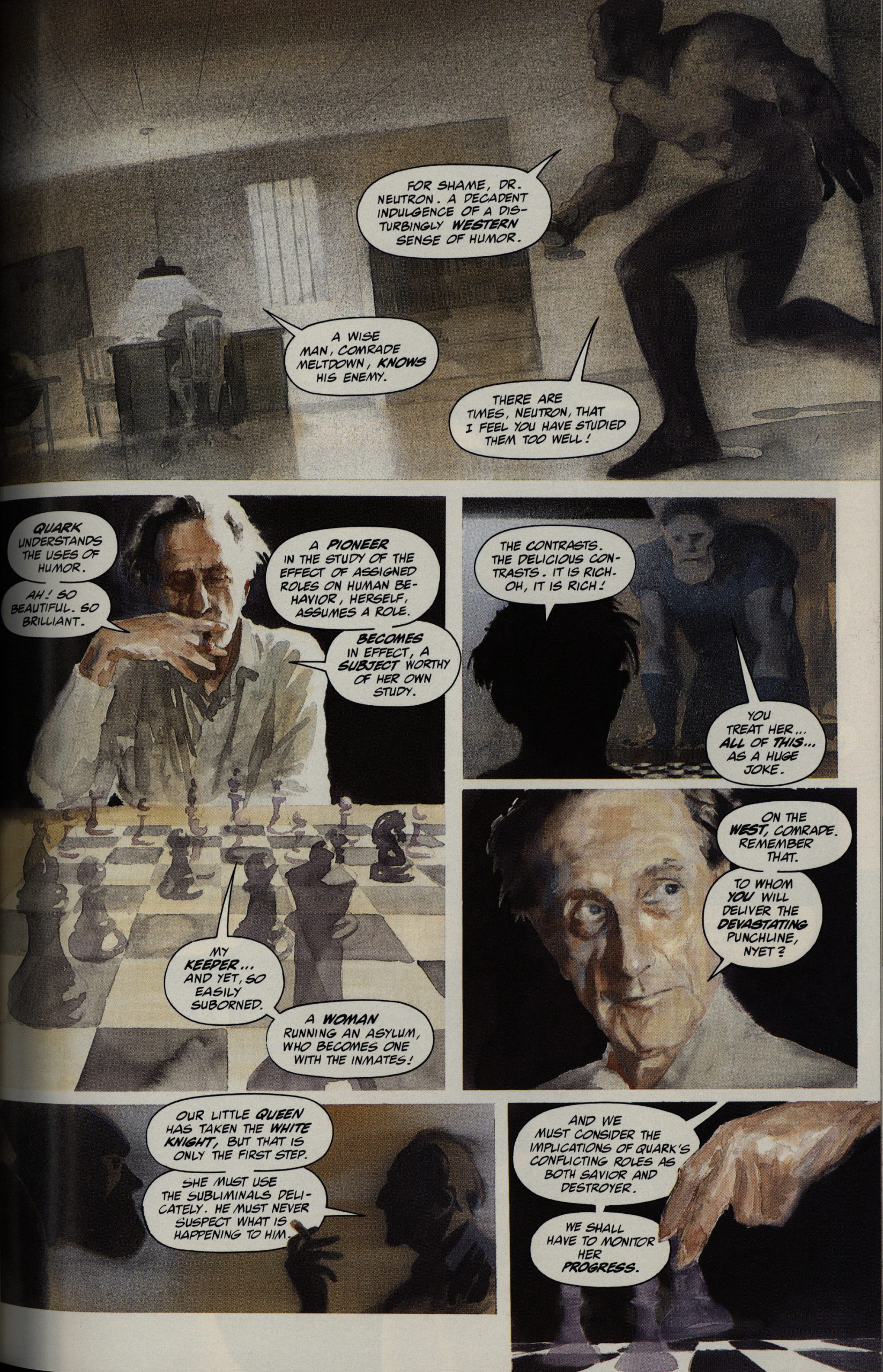 Oy vey. There’s way too much of dialogue like this: I know it’s not meant to be naturalistic, but even in an Evil Russian Scientist Convocation way, it’s just beyond stilted. 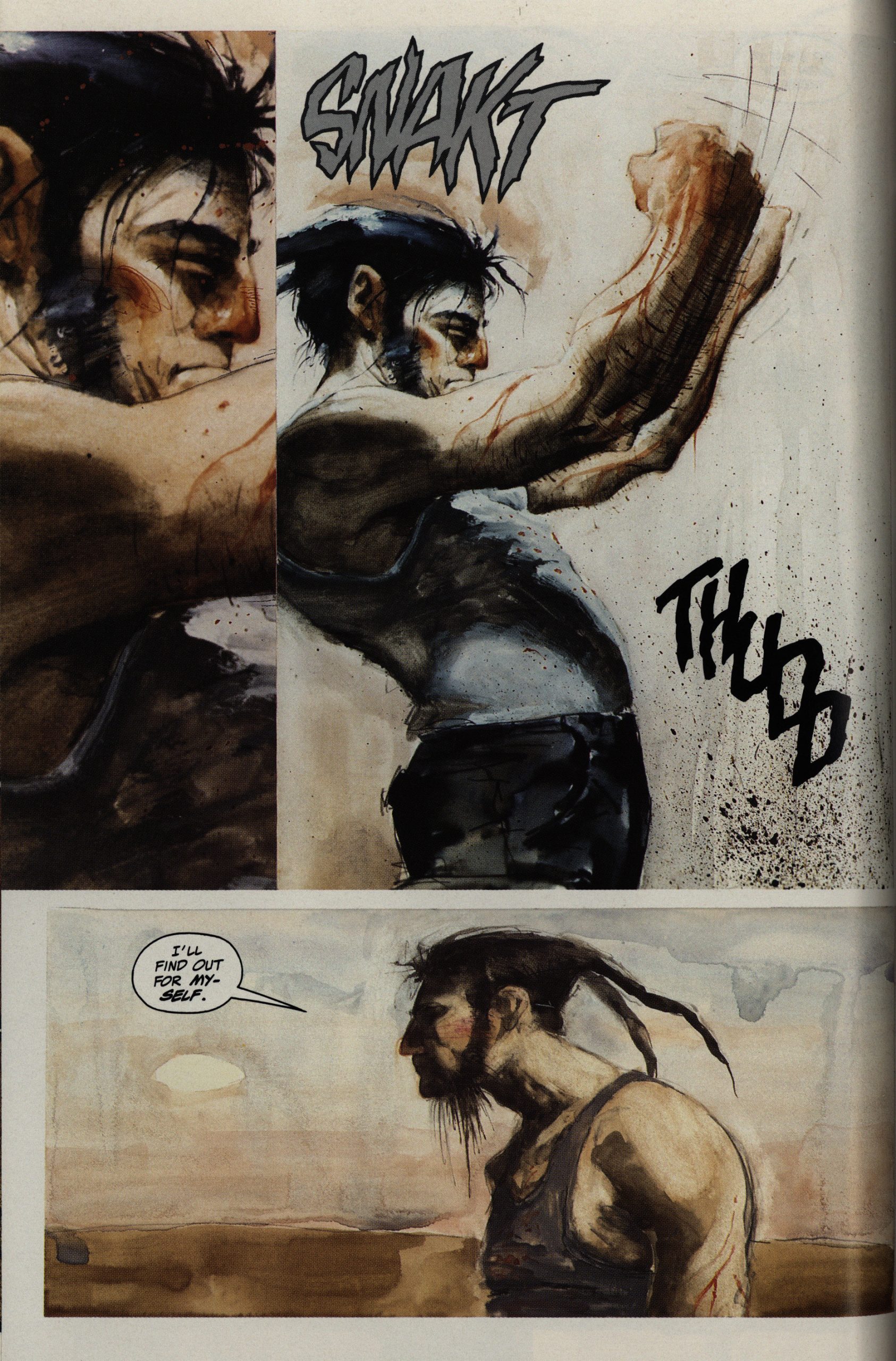 I wonder whether Williams really disliked the Wolverine character. I mean, look at that scraggly beard, and the hair-like-a-horn thing going on here… 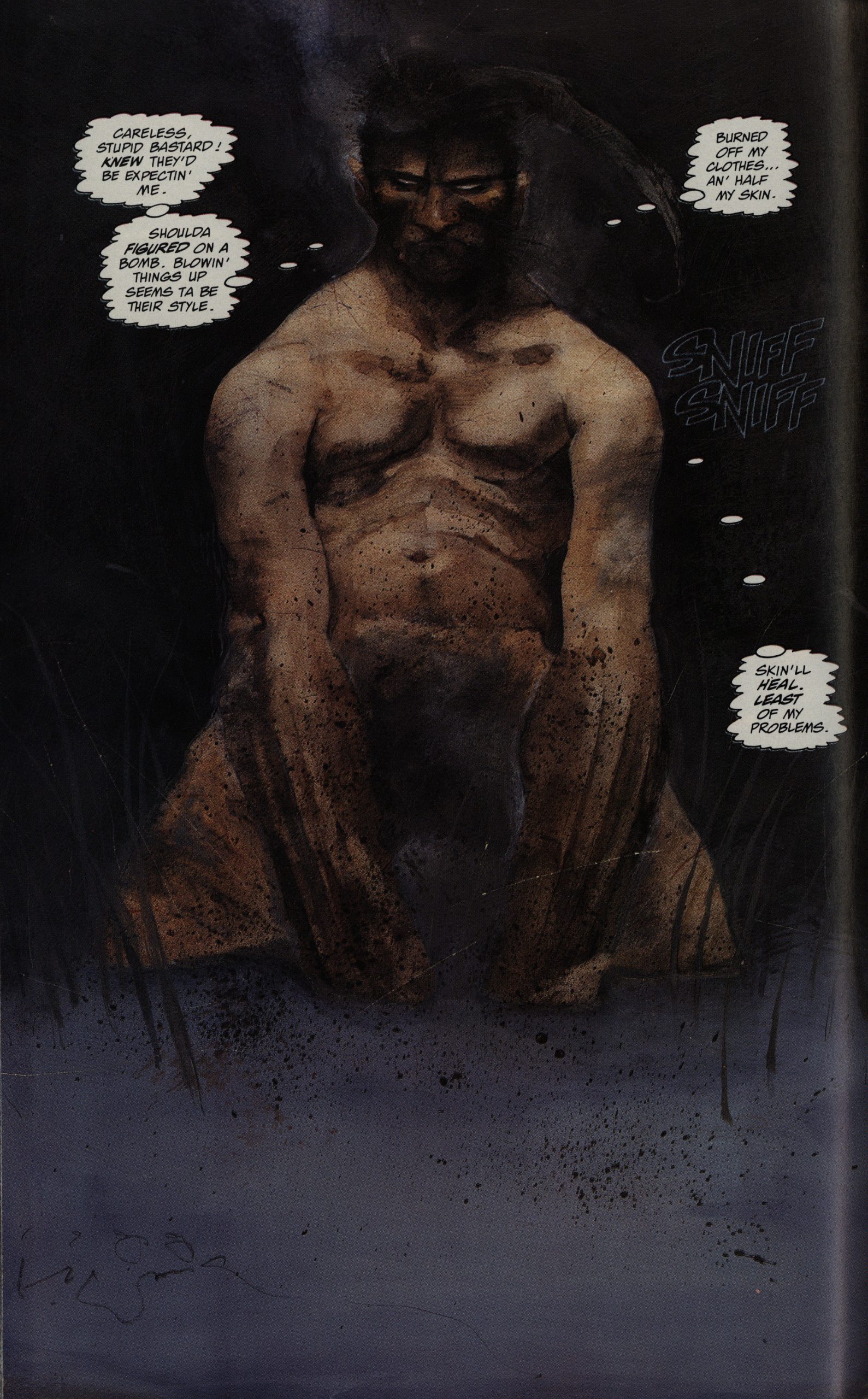 He’s having fun, at least. 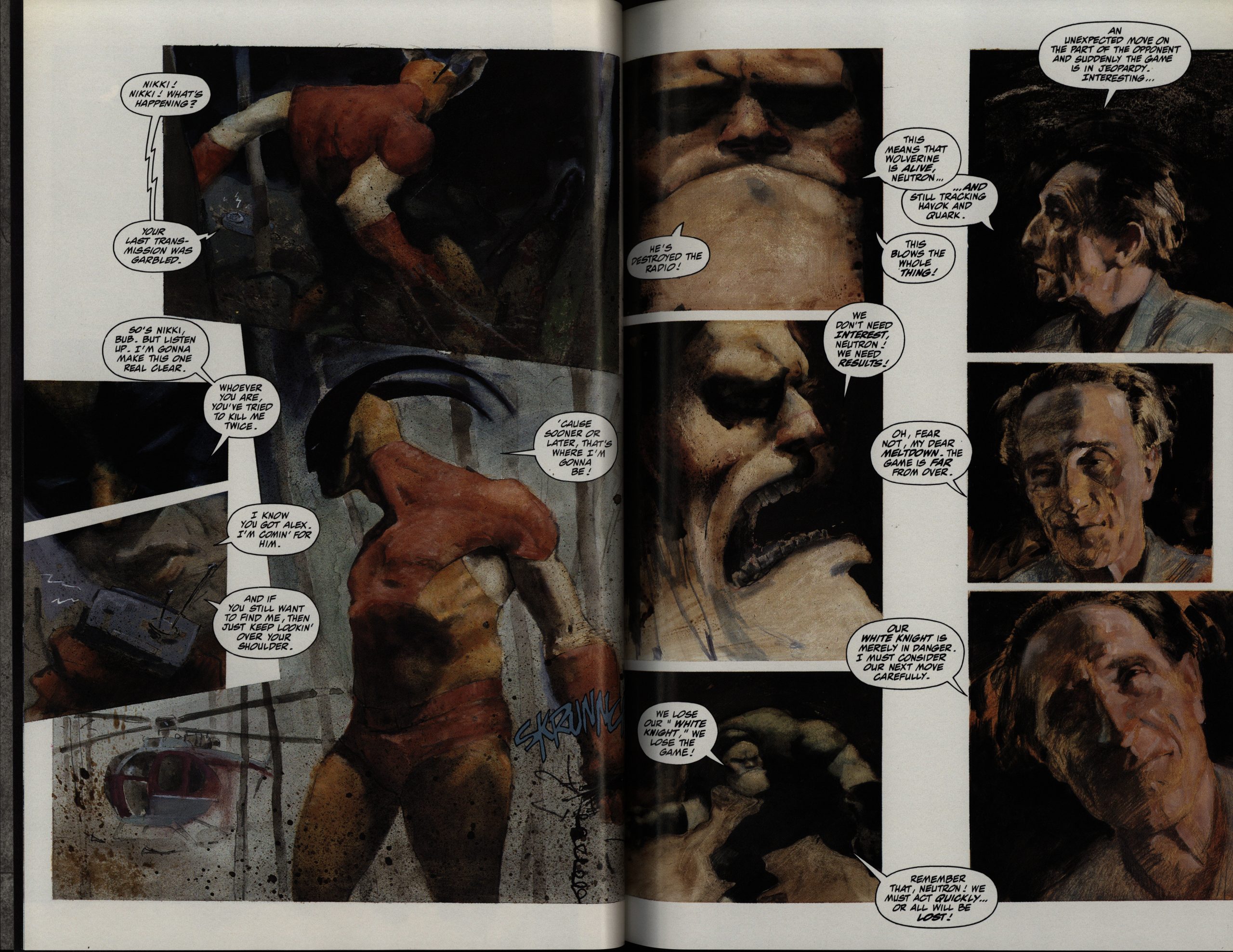 The character design for the big-jawed villain is rather… well… Sat next to the panels that are obviously photo-referenced, it’s rather jarring, isn’t it? 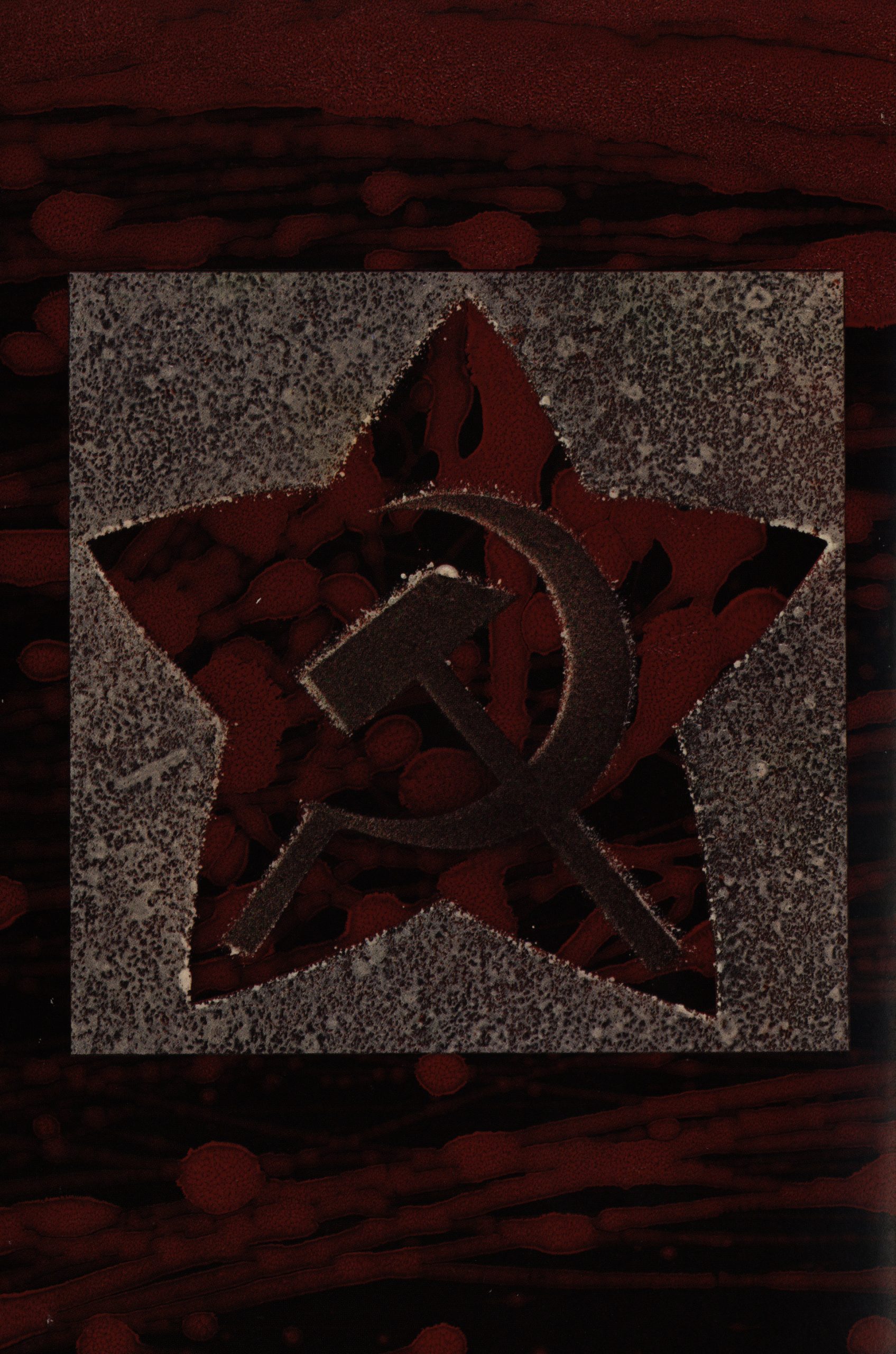 Heh. Is that a felt sickle and hammer? 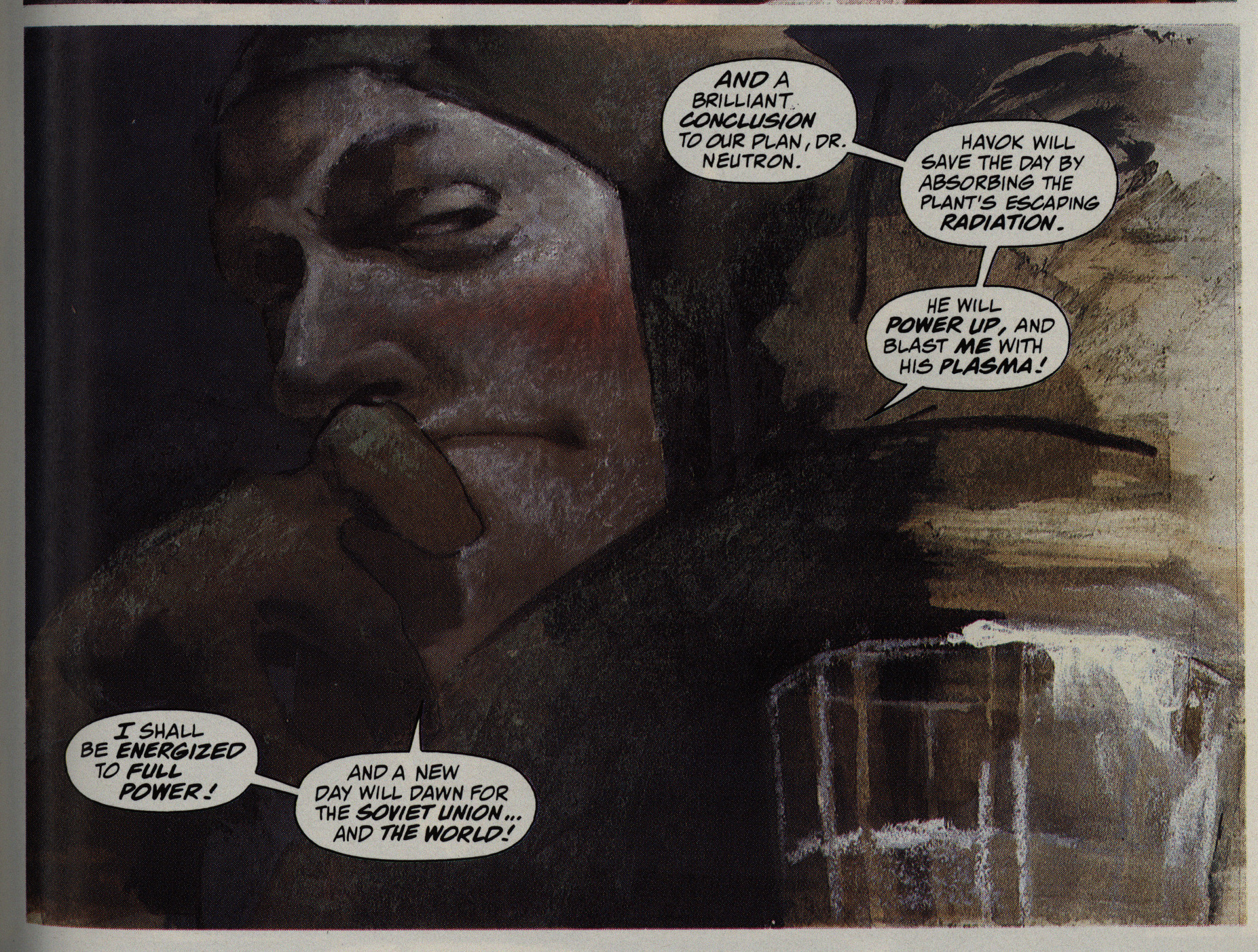 I think I’ve neglected to say anything about the plot, but I’ll just let the panel above spoil you: It tells you the entire nefarious scheme. Yes, they achieve their goals with the most convoluted means possible. No, it doesn’t make any sense, even as super-hero comics go.

This is a weird one.
In the space of a few, beautifully-
painted pages, we learn what really
happened at Chernobyl; see Wolverine
engaged in a barroom brawl; watch
Havok dismantle a most peculiar
vehicle; see Wolverine and Havok
gunned down (sort of); and much,
much more.
There are lots of things I liked about
this too-often delayed book, and a few
I didn’t.
The art is pretty good. Both Muth
and Williams are excellent painters.
That said, I must add that while
Williams’ work on Havok was terrific,
Muth’s portrayal of Wolverine did not
totally agree with me.
The tufts of hair that are Logan’s
trademark, here are elongated to the
point that they become almost surreal
and give him a strange quality that
defuses his violent character. Not that
he isn’t violent, but he appears more
of a violent cartoon than a near-homi-
cidal maniac.
Still, perhaps the contrast with the
more “normal” appearance of Alex/
Havok will grow on me.

one can only throw up
one’s hands and mutter, resignedly: ’61
may not know art, but I fer damn sure
know what I like.
And I like Havok and Wolverine:
Meltdown #1.

The series was recently collected in a new edition from Marvel:

Havok & Wolverine: Meltdown isn’t a bad story, but it sure is inconsistent. The pacing is all over the place, and while there are interesting plot points, the characters’ actions and motivations don’t always make sense. It’s good enough that it’s a little surprising it’s been so forgotten, especially given the creators involved, but it’s not going to break any ground for a modern reader, either.

Of course, Meltdown also features absolutely gorgeous, fully painted art. Often times, painted art in comics comes too close to being abstract and hard to follow, sacrificing the storytelling elements in favor of a wow-factor, but Muth and Williams thread that needle carefully. Wolverine is perhaps, at times, a bit off model (particularly his hair wings), and the series features its fair share of attractive pages more concerned with mood or abstraction than characterization or storytelling, but for the most part, the art manages to tell the story while still being artistic.