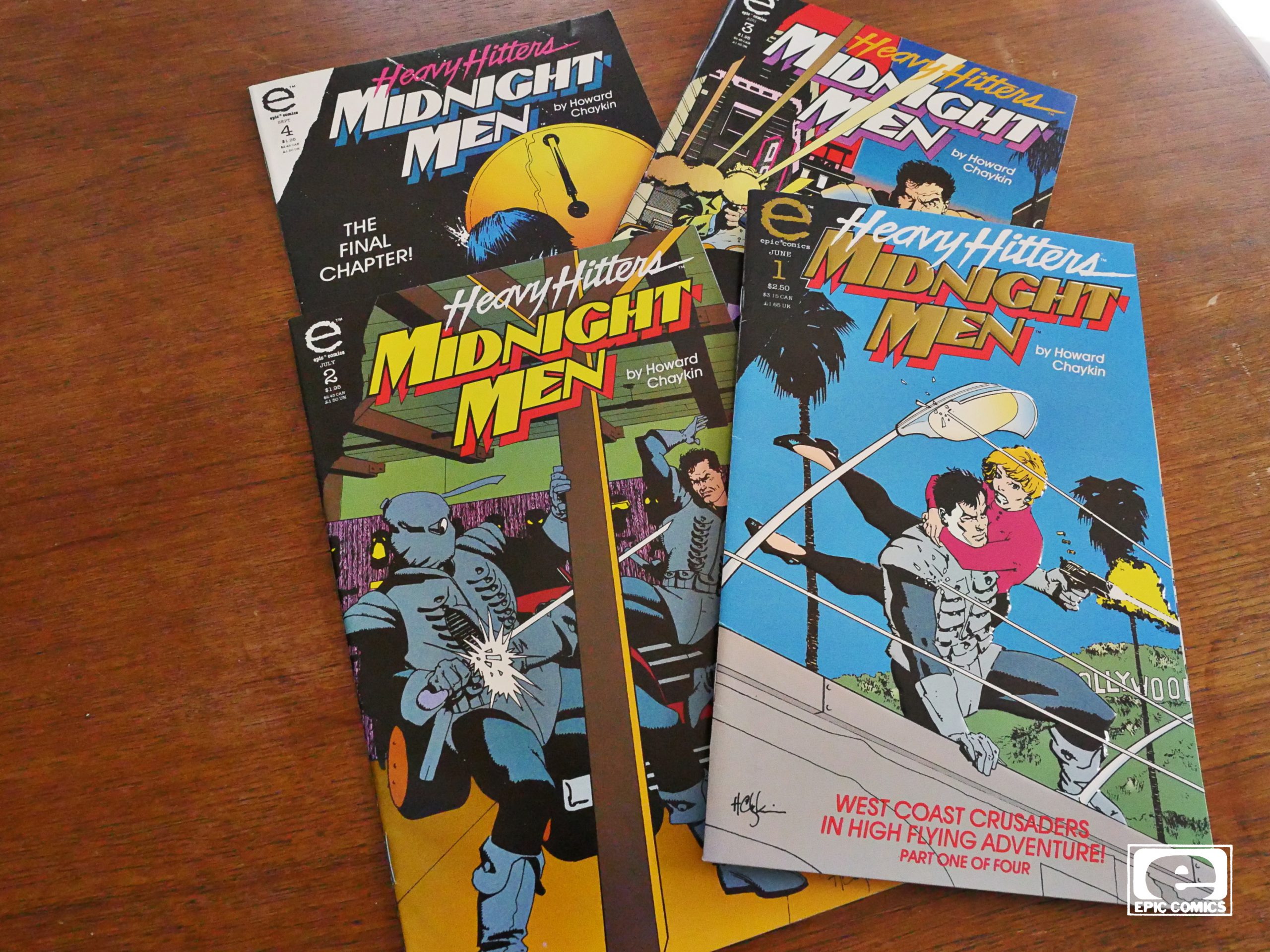 Oh, I thought the “Heavy Hitters” thing Epic re-launched as in 1993 was going to be all about trying to out-Image Image? But it’s hard to imagine someone further from the Image aesthetic than Chaykin — he’s all about dense, intricate storytelling; not endless splash pages.

As usual, the first issue has an embossed cover with metallic inks… but this metallic ink is the least metallic ink I’ve ever seen. It’s less gold than just… brown… Perhaps it’s lost its lustre over the years? 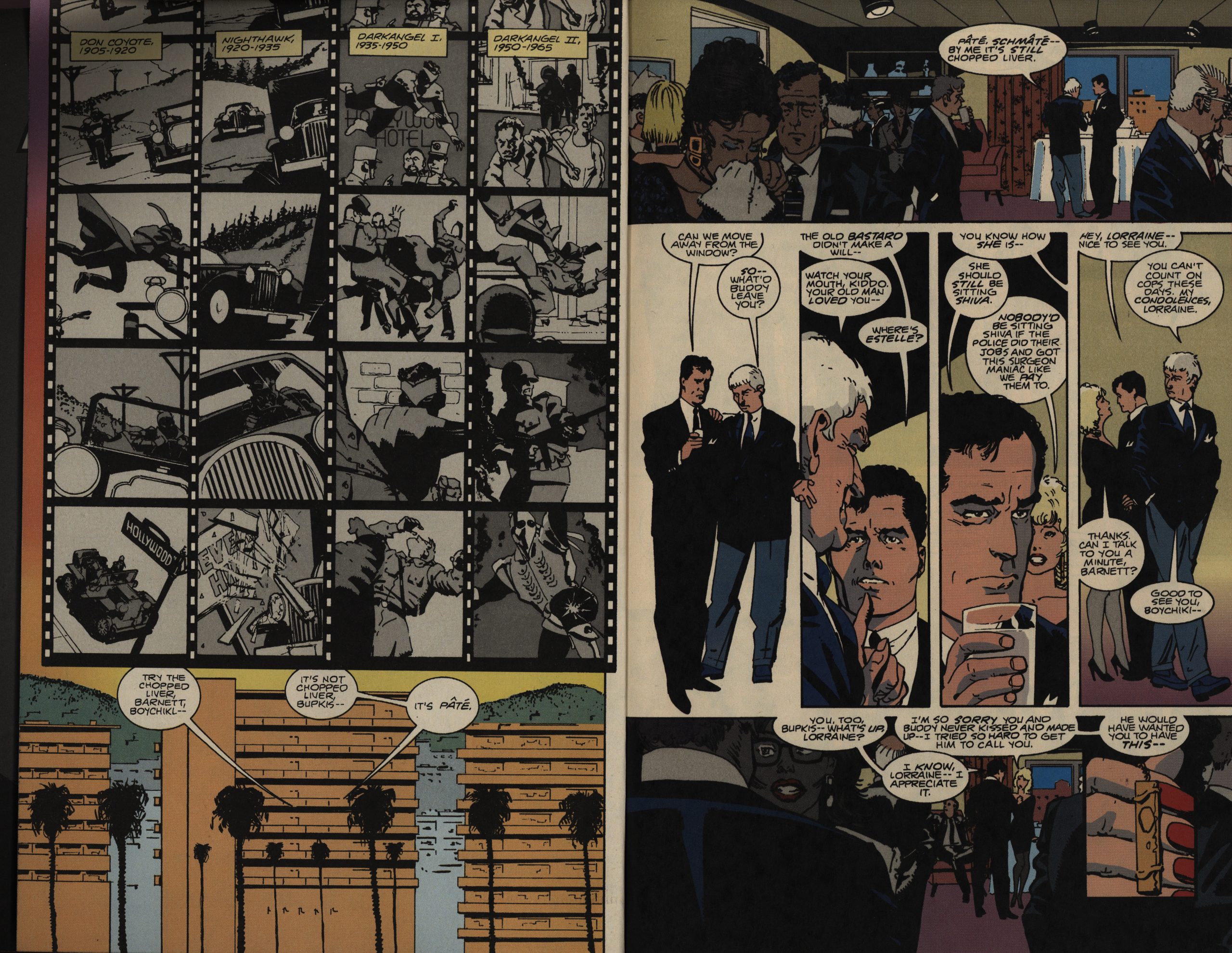 ANYWAY! We’re off to a classic Chaykin start, with people being introduced very er efficiently (with some nod to intertextuality)… 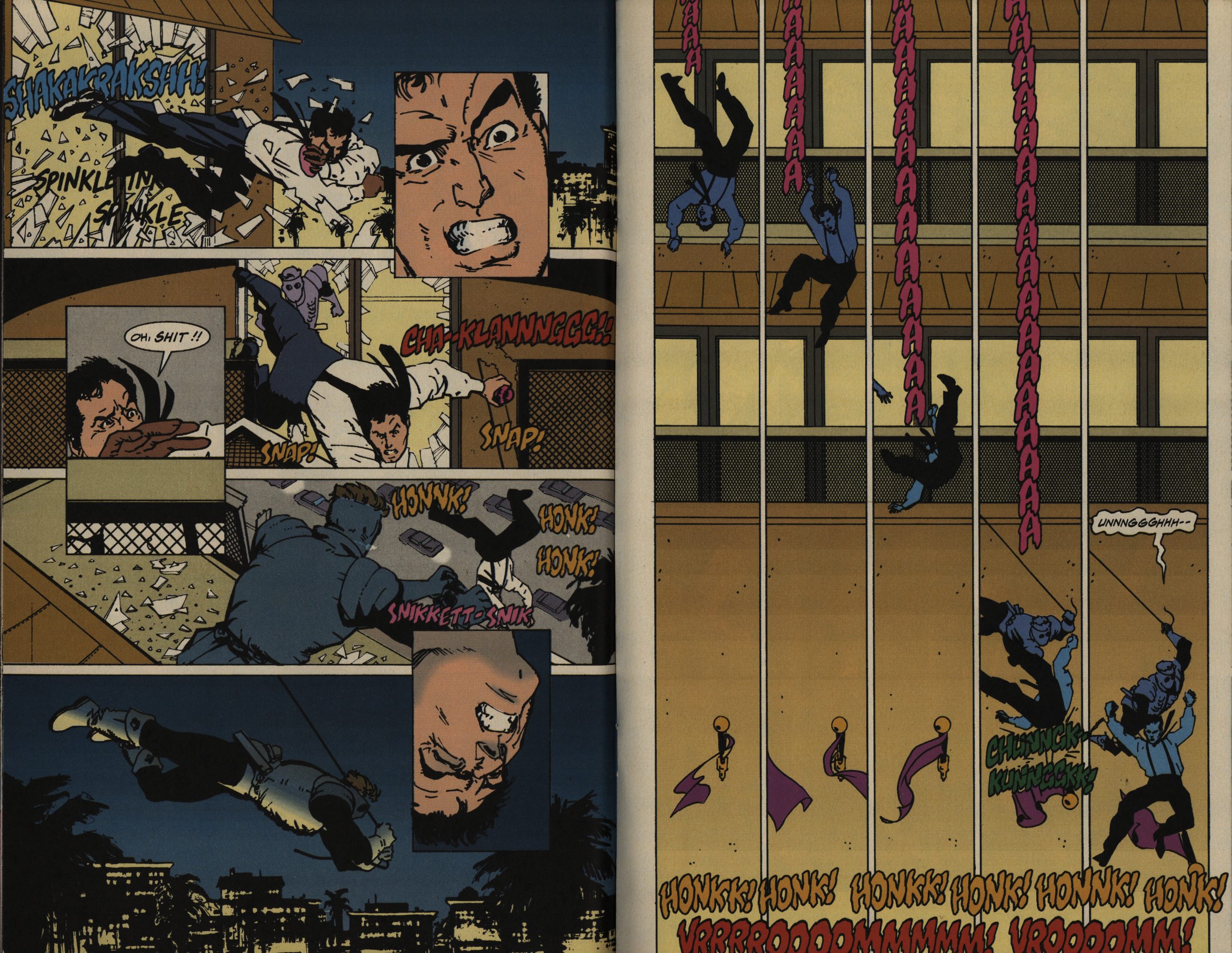 … and then straight into some very inventively laid-out action. (And I’m not going to spoil how this scene ends, because it’s… not going to end as you’d assume.)

At this point, I’m totally in on this series: This seems like prime Chaykin, with stylish characters, somewhat witty repartee, and what looks like is going to be an interesting plot. 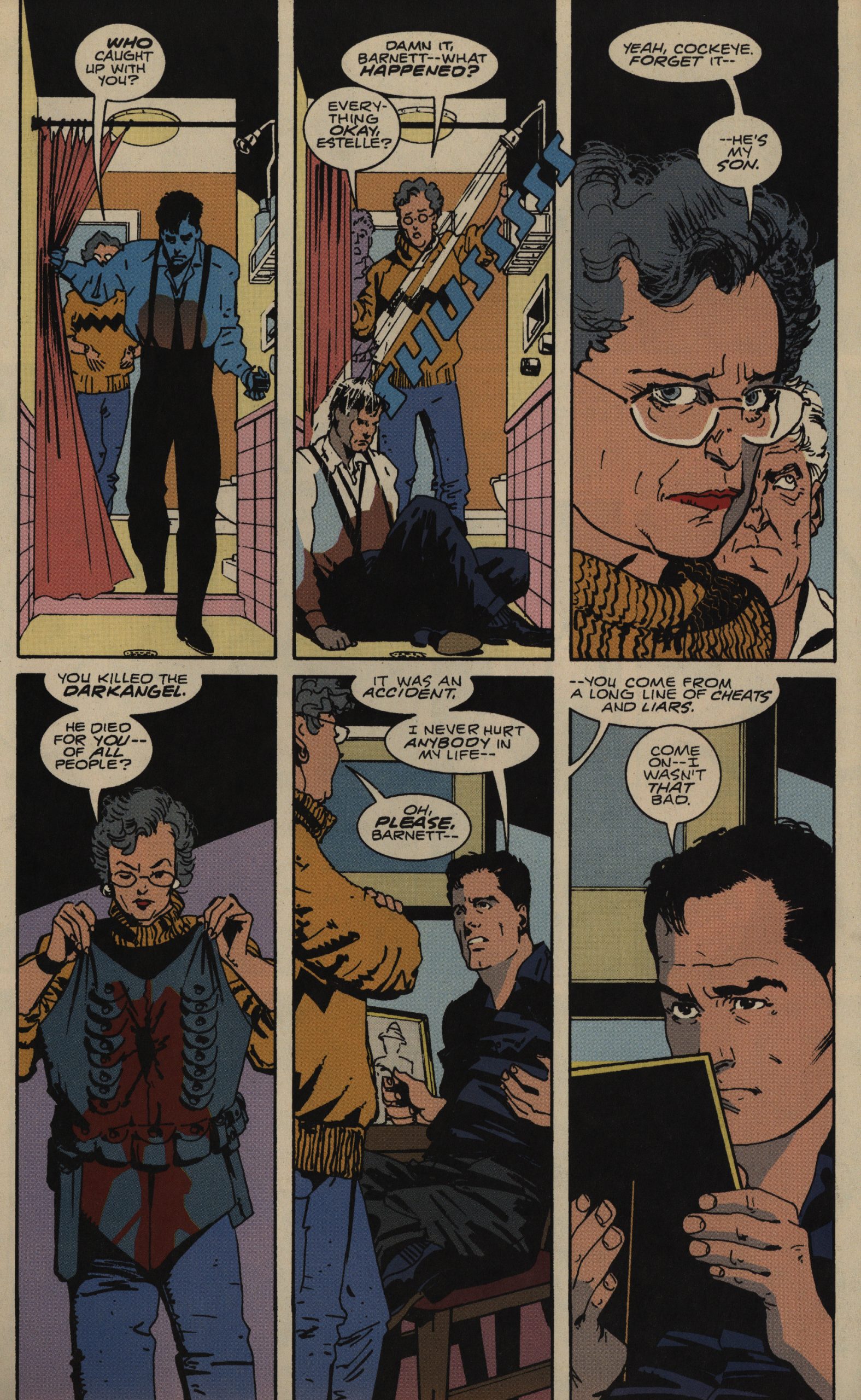 Chaykin can get so much characterisation done in so few words; I love it. Perhaps he invests a bit less in his artwork than he did in the 80s (fewer backgrounds and slightly more rough-hewn lines), but it’s still very on point.

Oh, yeah, the villain is called Noble Youngblood, which is as close as we get to an Image reference here. 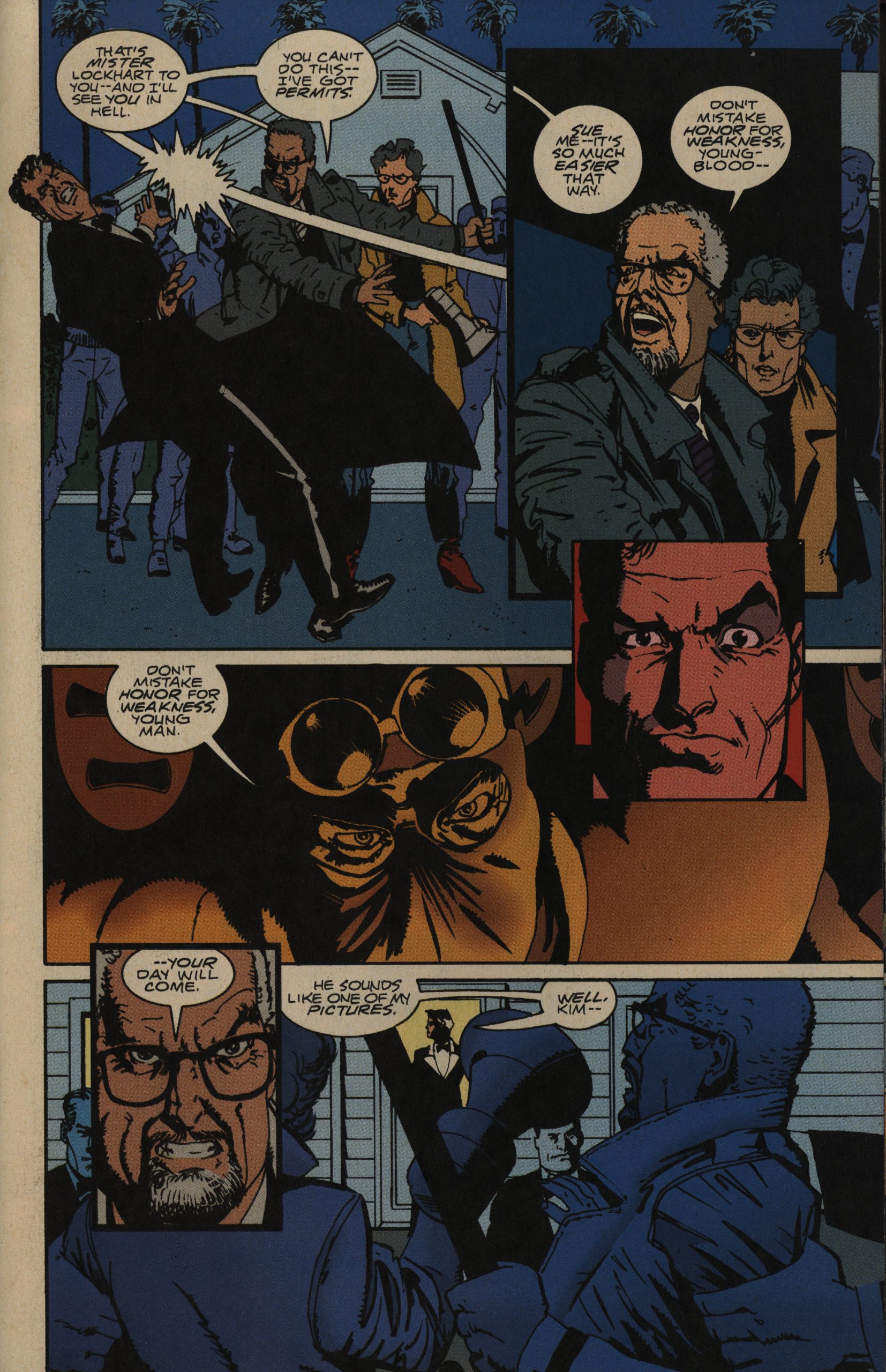 I think the series does seem to come apart a bit in the second half. For instance, earlier in this issue, we have that bearded guy doing that line, and then he repeats it, and then our protagonists flashes back to that first instance — which we just read a few pages ago! It shows a lack of confidence in the reader that’s really unusual for Chaykin.

Chaykin usually uses confusion as a storytelling tool. I remember writing about how important confusion can be in drawing a reader in; by not spelling things out you invest the reader more in co-creating the narrative inside the reader’s brain. I got a reaction as if I were either insane or retarded, because “clarity” is what’s heralded as the apex of comics storytelling. Or, really, the only way to do a comic book; anything else is a failure. 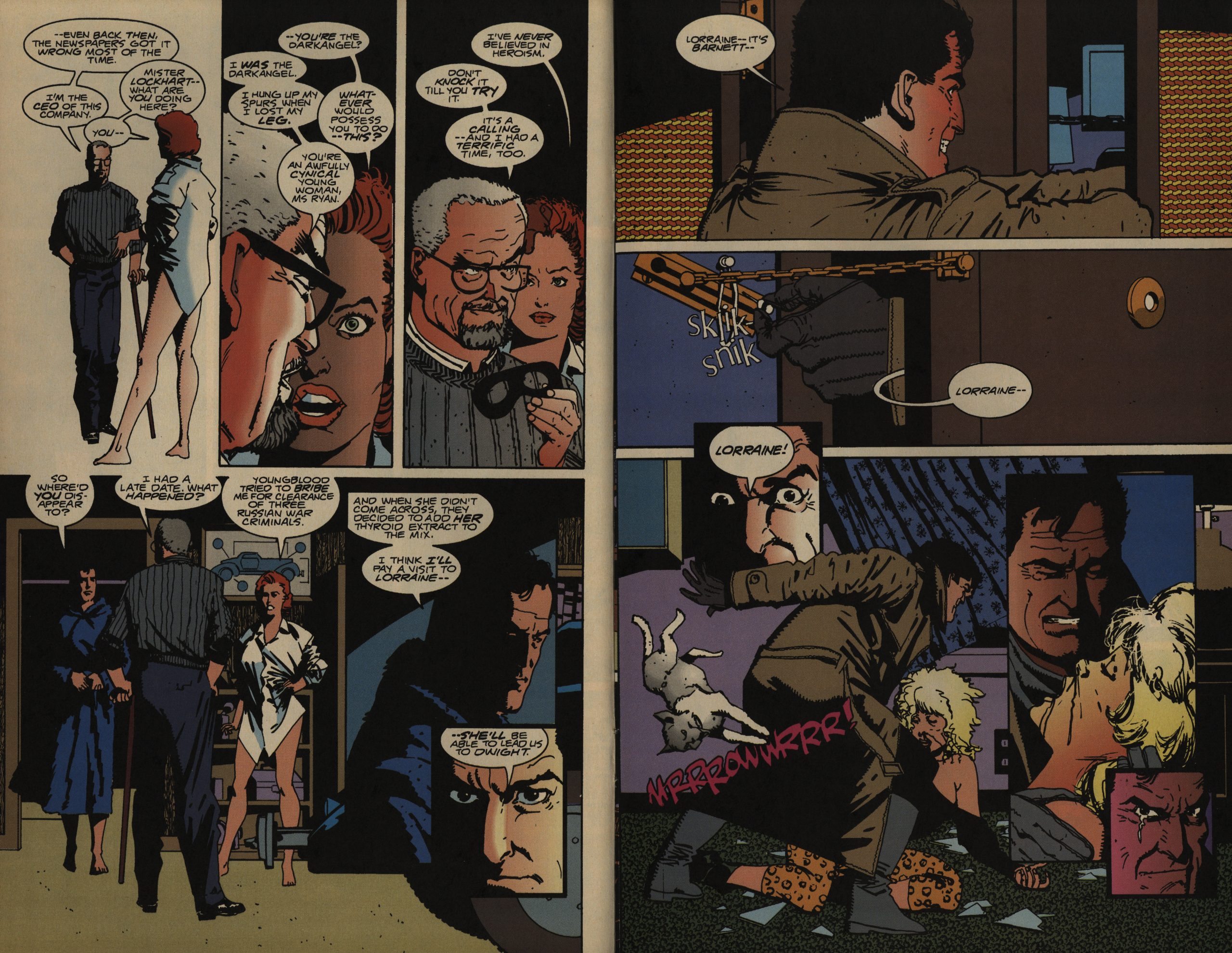 But it’s what Chaykin does so well, and having the characters spell out what any reader that had been paying attention must already have understood is just boring.

Not to mention that Our Protagonist goes to visit his girlfriend all of a sudden, because she’ll lead him to Dwight, apparently, and then find her fridged, and then on the next page he’s apparently found Dwight, anyway, and then he’s beating him up? 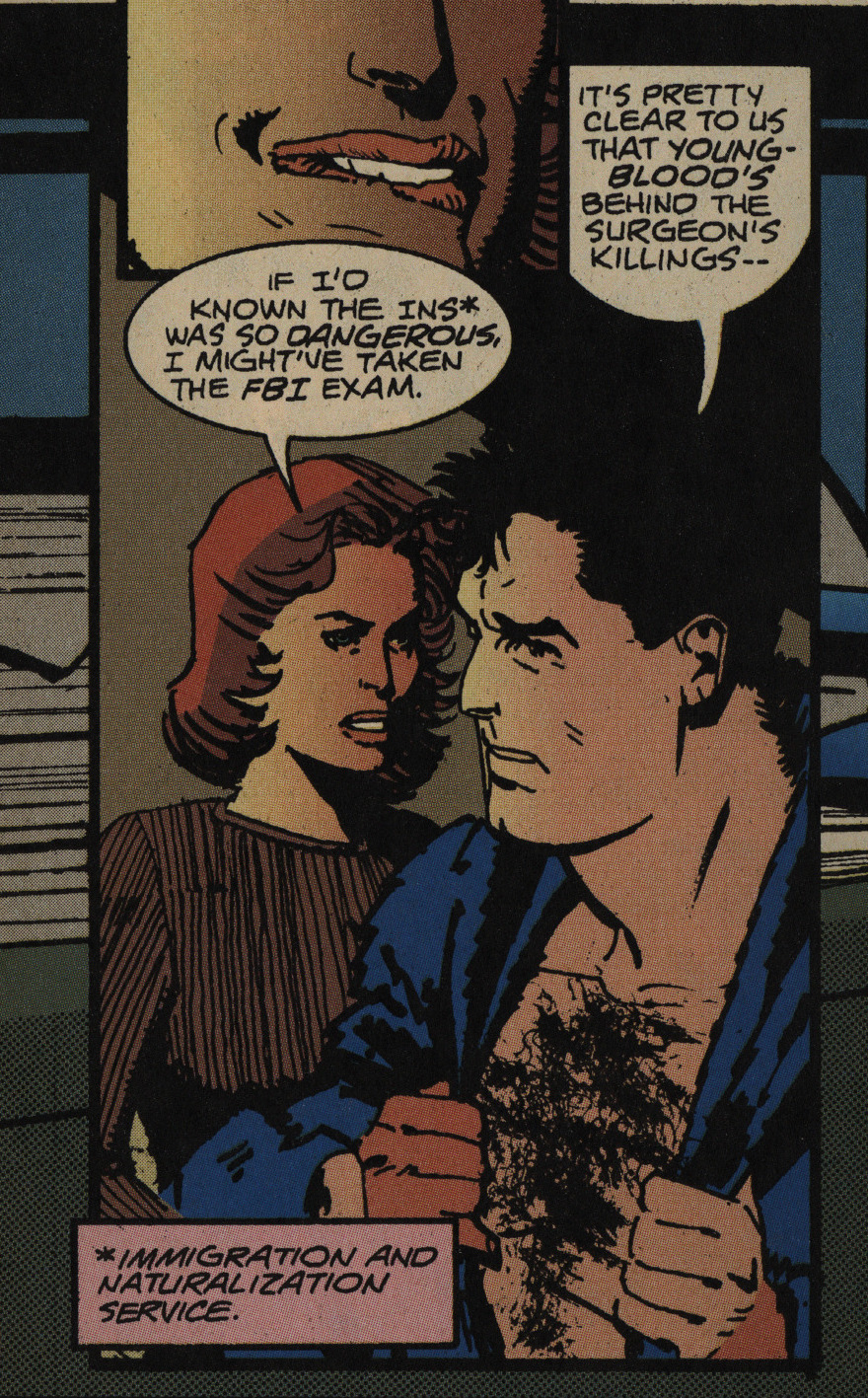 I wonder whether Chaykin was starting to get notes from Marvel to make things more easily digestible — in the previous issue, they talked about “INS” a lot, but didn’t asterisk anything. Weird. Is that the reason the first issue was awesome and then things took a more boring turn? 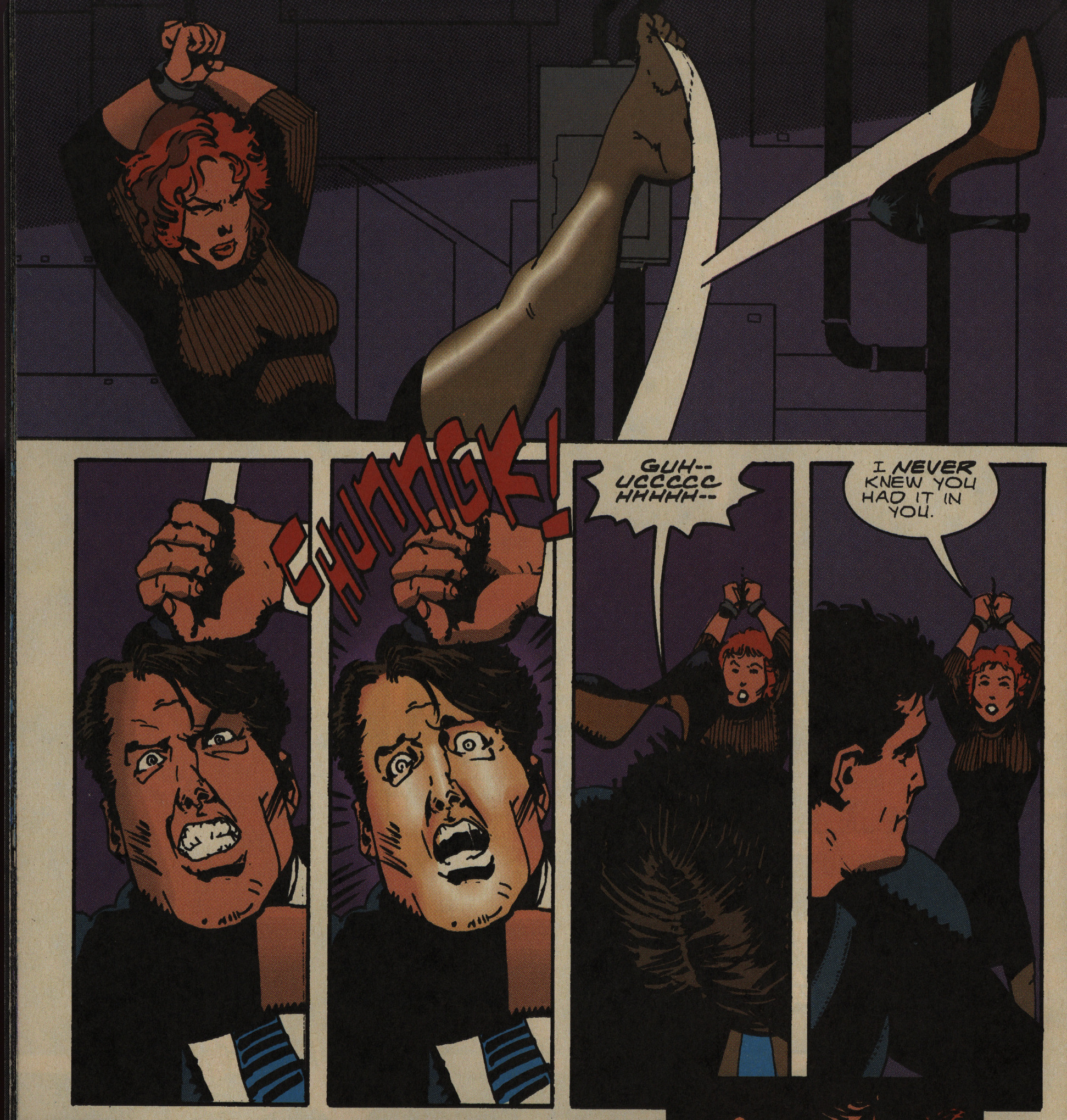 The final issue makes up for the mid-series doldrums by having a very er original (and long) action sequence climax. Some of the original bits (like killing a guy with a shoe that seems like it would mass approx. zero) don’t really make any sense, but eh whatevs.

It doesn’t look like this has ever been collected or reprinted? Weird. It’s a good read despite its flaws.

But… he’s in a DC role playing game?

I think that it had originally been pitched as the script for an action/thriller movie, then became a comic book.

It was originally a Batman pitch?

The biggest problem with MIDNIGHT MEN is that it is a HVC comic. This means that people who don’t like HVC comics won’t like it (it is very HVC) but that’s their loss. For people who like HVC comics the fact that it is very much a HVC comic is also a problem. Because this means it is incredibly slick with every one of the elements under the author’s control working to the sweet end of entertaining the audience. It is so good at doing this that it is easy to overlook how clever it is. It’s ultimately too good for its own good.