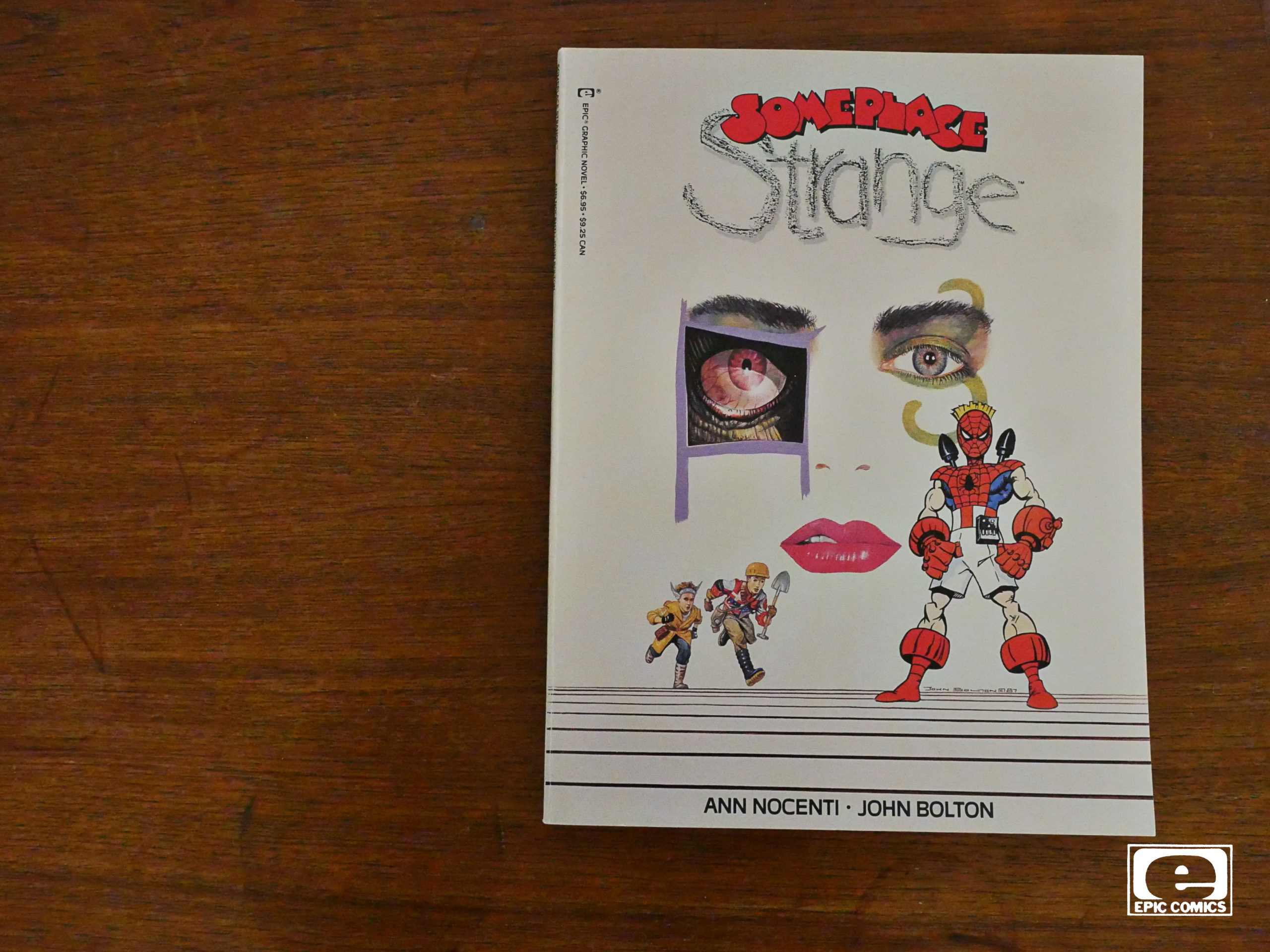 Well, they give it away in the title: This is a strange book. The strangest Epic published I’ll wager, even though I have many more comics to read before I get to the end.

But let’s start with the cover: As you’ll see, this is a lush, gorgeous, fully-painted comic, so they go with a cover that’s mostly empty space and where the most prominent features are line art. Granted, it’s something Spider-Man-like, which may shift a few units, but it’s a strange choice. 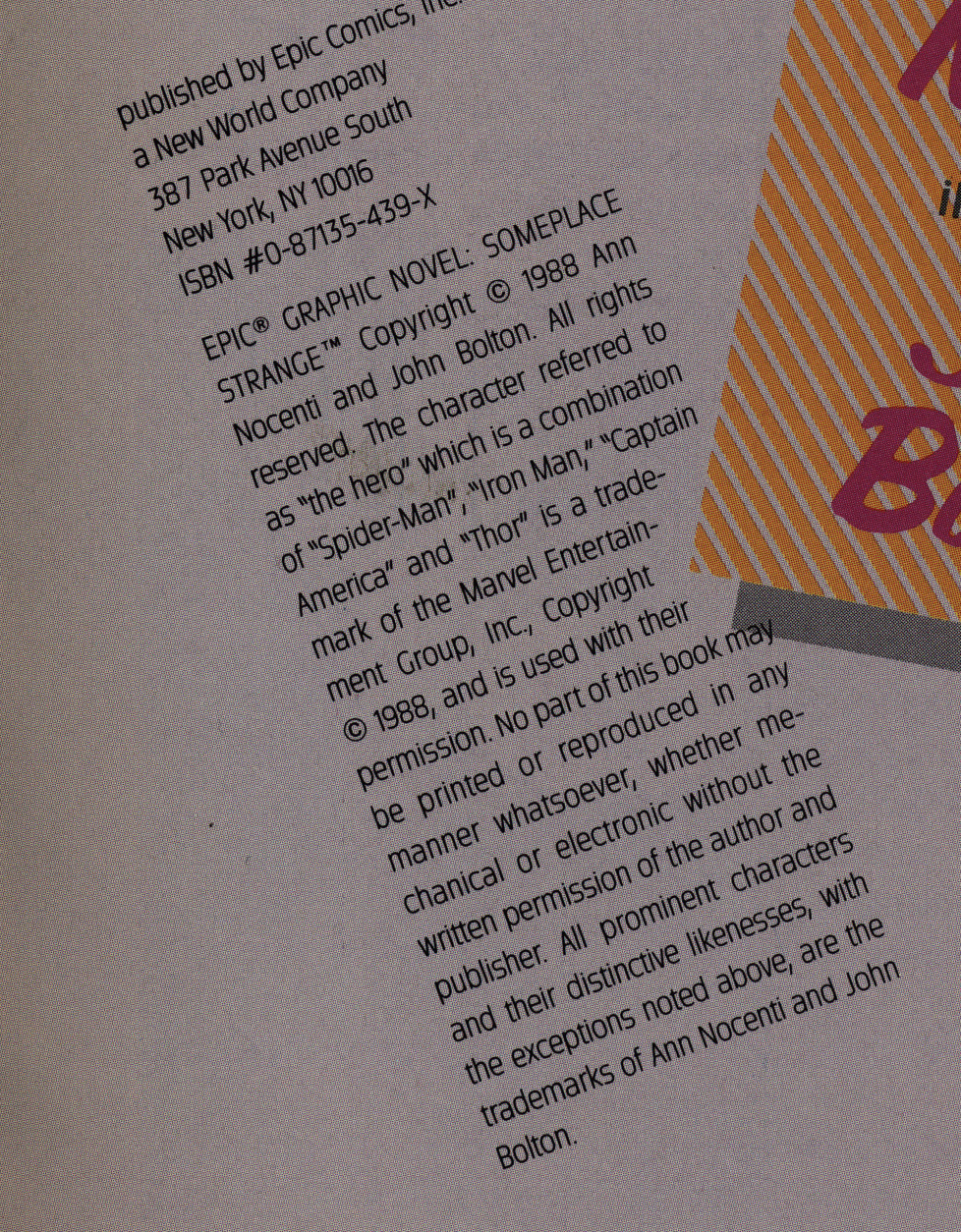 And speaking of that Spider-Man-ish guy: This is a creator-owned book, but they’re using Marvel’s characters by permission. Ann Nocenti was a veteran Marvel editor and writer, so I guess that’s how she swung it. 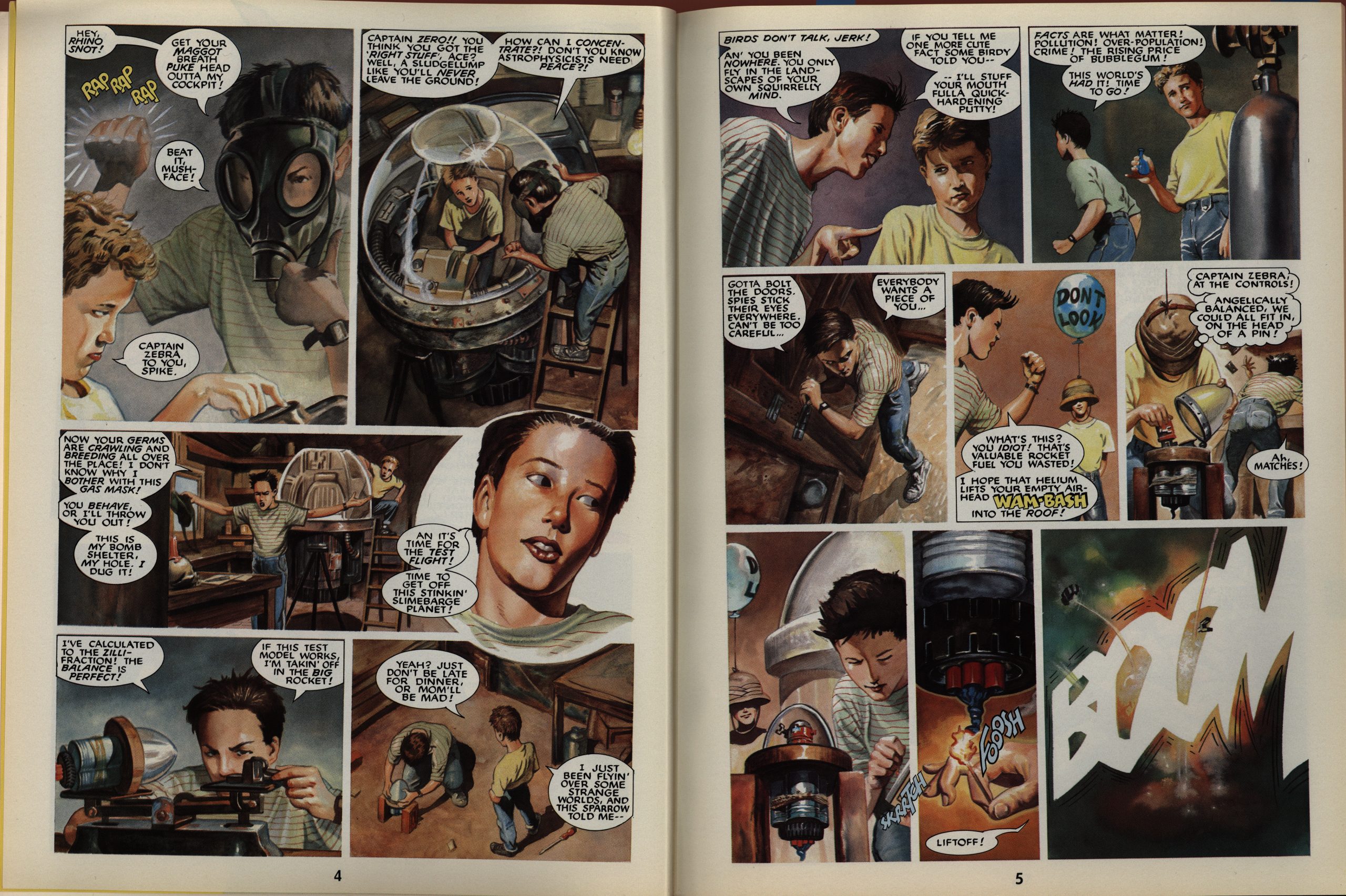 But, yes, as you can see: Bolton’s artwork is really accomplished here. The poses are a teensy bit stiff, but it works. Fully-painted comics sometimes devolve into fumetti (i.e., Alex Ross), and that’s never a good thing, but this looks and reads great.

And the story is about… two kids with a too-active imagination? It’s a celebration of childhood fantasies? What? And here the “strange” part kicks in, and probably not they way they intended: 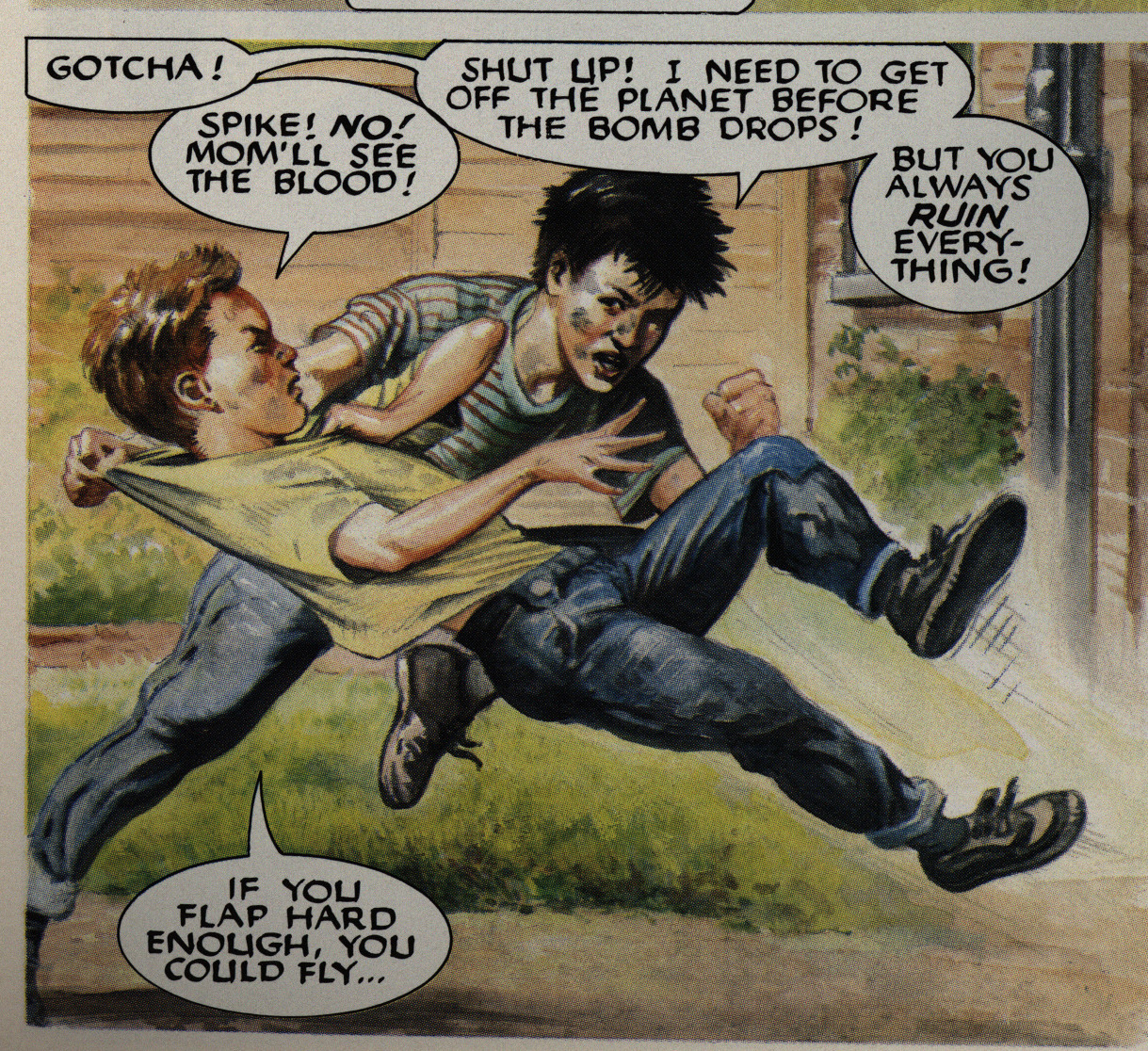 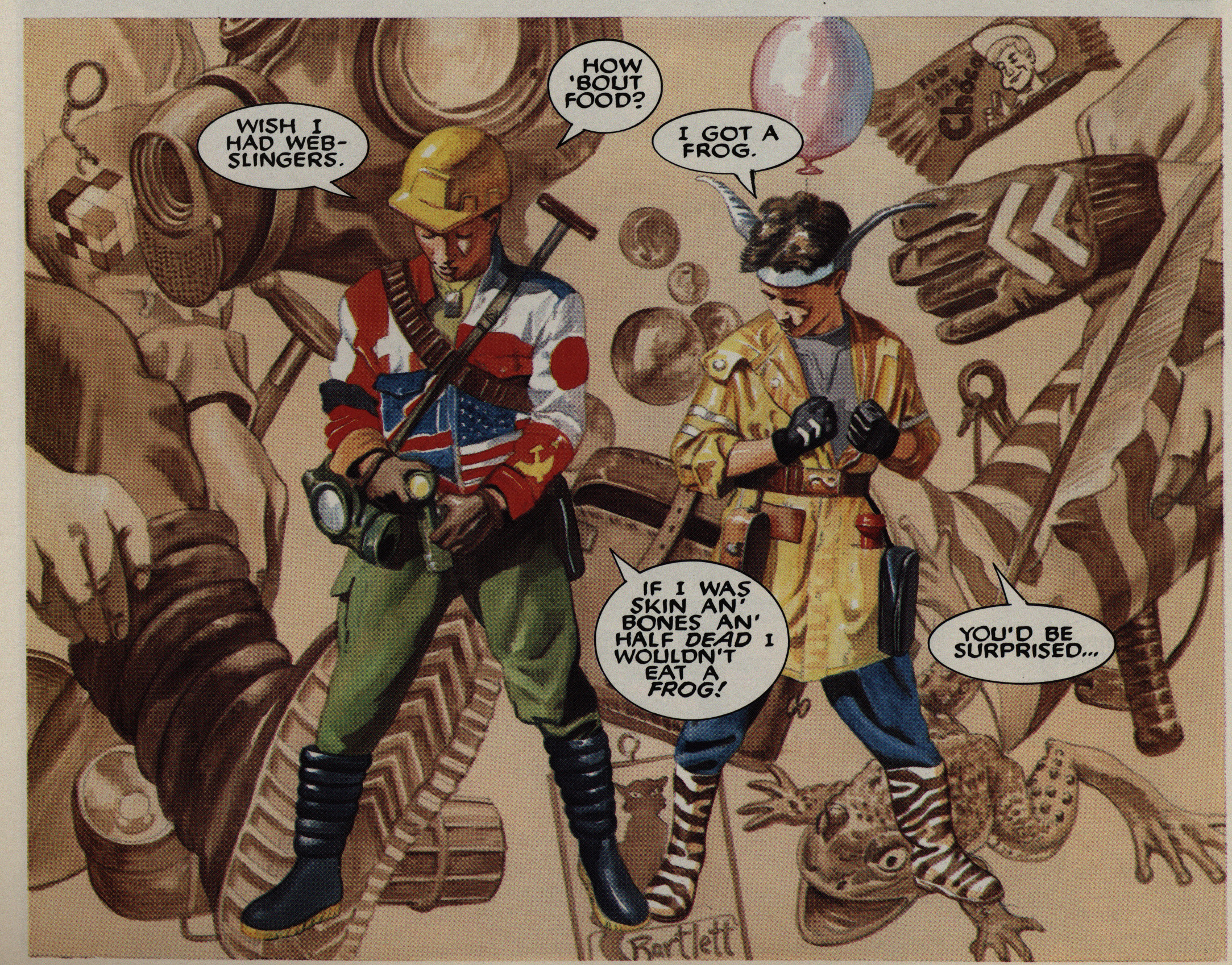 I think Nocenti is trying for Alice-like whimsy, but these kids come off as mentally challenged. They keep talking in semi-non-sequiturs, but without actually being funny. 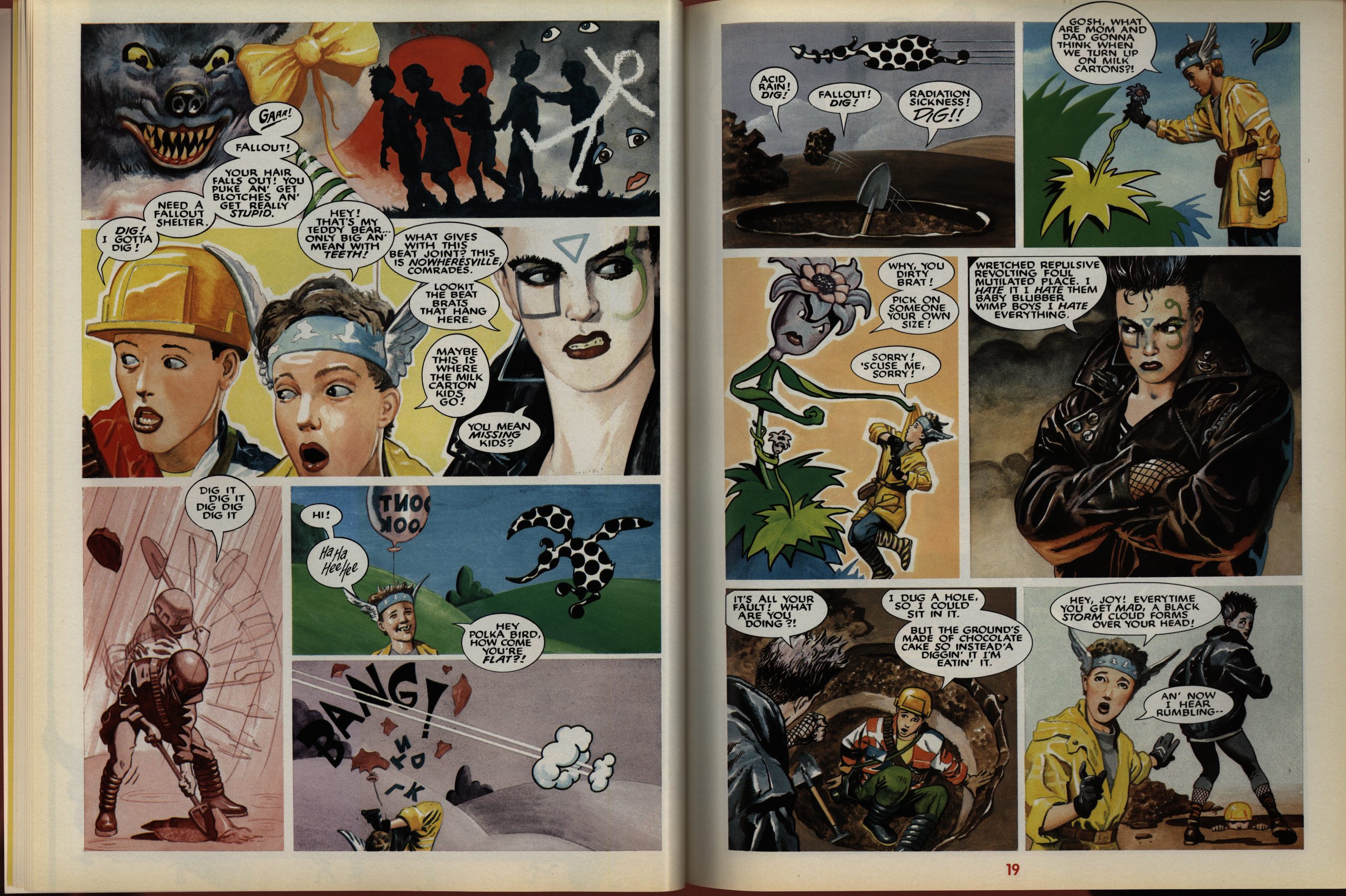 The Alice thing really takes off when they descend into the “Someplace Strange”, where they meet strange creatures who talk to them about strange things and then they learn the not-so-strange moral lesson about being kind and being themselves and stuff.

At least Bolton has fun with doing various techniques. 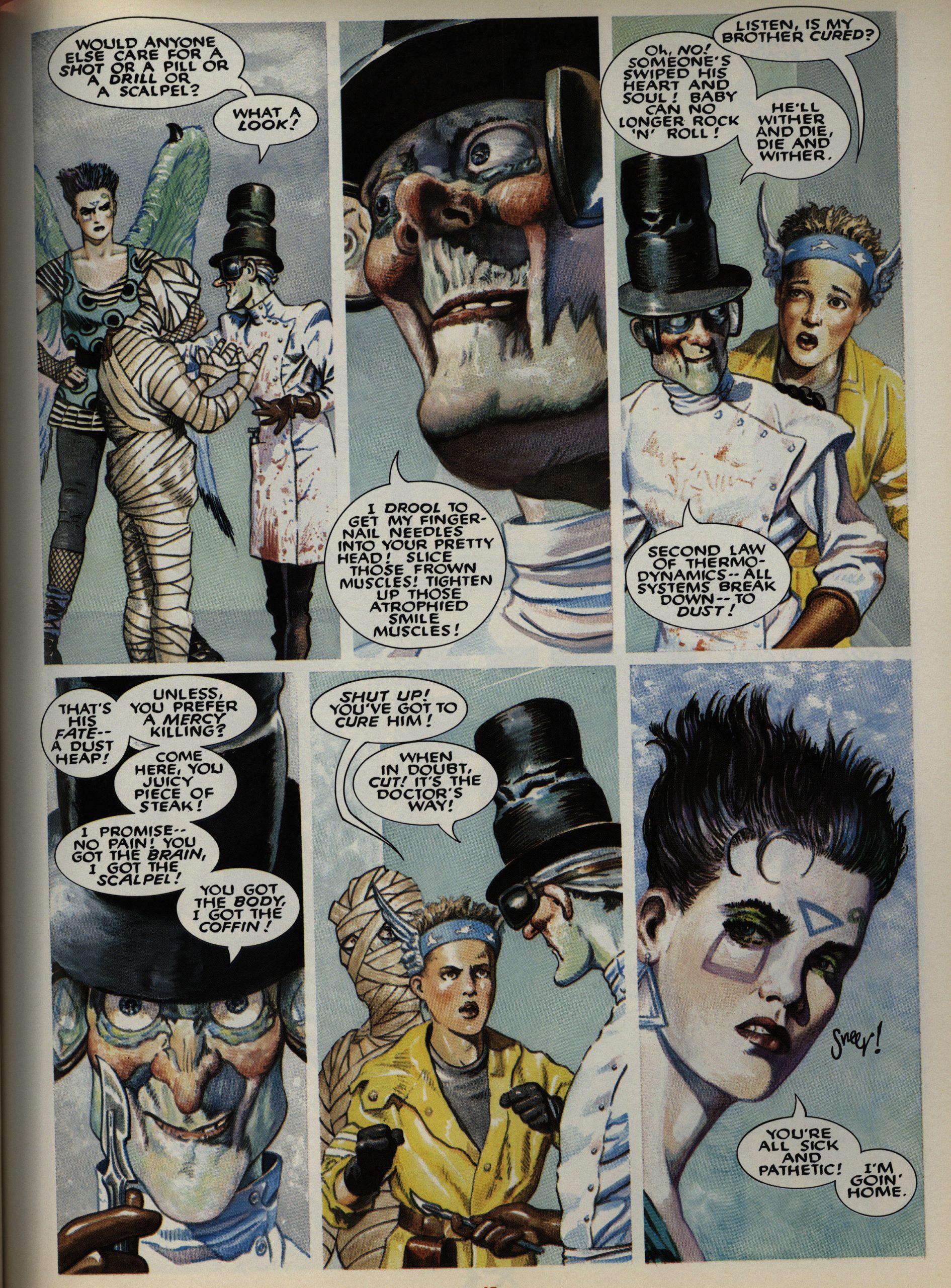 There’s little structure on display here. They meet a couple of these verbiage-spouting entities, and I think…? they’re meant to be funny? They aren’t? It’s bizarre. 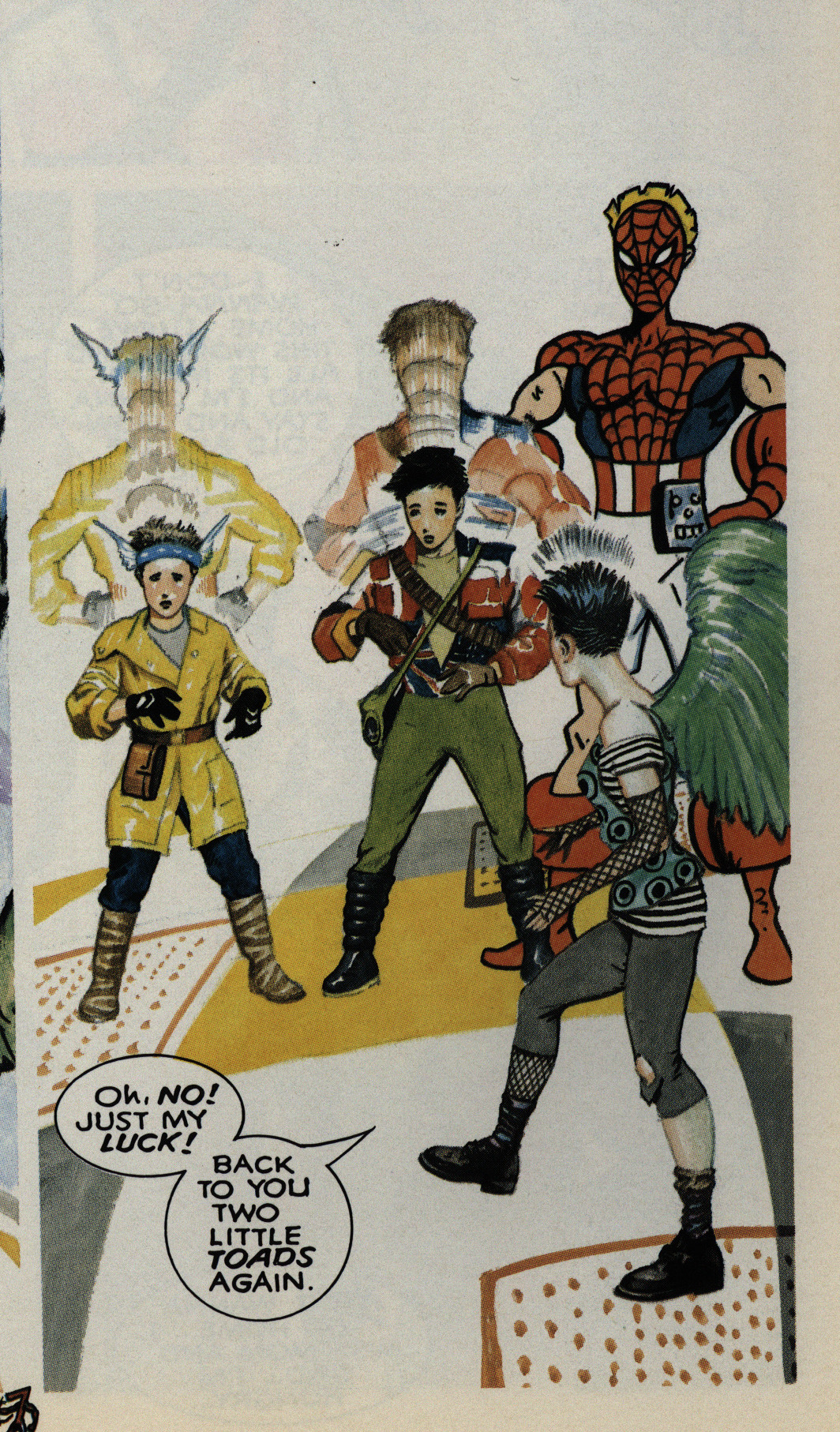 Then the Spider-Man-thing shows up, they have a big fight scene, and then it’s over.

After reading it, you’ll be asking yourself many questions; foremost of all: “Why?”

I was unable to find any contemporaneous reviews about it, but there’s a couple of news items:

She is collaborating on a graphic novel with John
Bolton. “It’s called Someplace Strange and John is
lovingly painting every page. It’s about childhood fears
and magic. The characters go on a bogey hunt and they
fall into a surrealistic land that reflects their own emo-
tions,” she explained enthusiastically. “It’s got a lot to
do with what kids go through, getting into a funk and
not being able to shake it off; the whole world gets darker
and grimmer unless you get out of your funk. John’s using
his own kids as models for the characters. It’s going to
be a fun novel.”

Someplace Strange, the 64-page
graphic.novel by Ann Nocenti and John
Bolton, will finally appear in August. It
will sell for $6.95, and concerns the
adventures of two young boys who,
unable to cope with today’s world, join
up with a punk teenager called Joy on
a quest to kill the Bogeyman. Then end
up in a bizarre land which reflects their
every feeling—a fact which can both help
and hurt.
“Each of them is a very real child,
with a child’s capacity for spite sand
imagination,” says Ann Nocenti of her
three juvenile leads. “Their minds pro-
vide fertile materials for the dimension.”
Among their creations is Dre Shock (a
doctor/dentist), Tear-Jerk (who spends
all his time wallowing in self-pity), a
conglomerated super-hero, and—from
the mind of the mean-spirited Joy—The
Bogeyman!

It’s been re-released, and there’s some reviews:

Pick up Someplace Strange if you like weird artwork and/or explorations of the nature of evil, especially through the eyes of children.

Someplace Strange is a marvelous envisioning of what a child fears. It also allows us the opportunity to see how a child overcomes that fear.