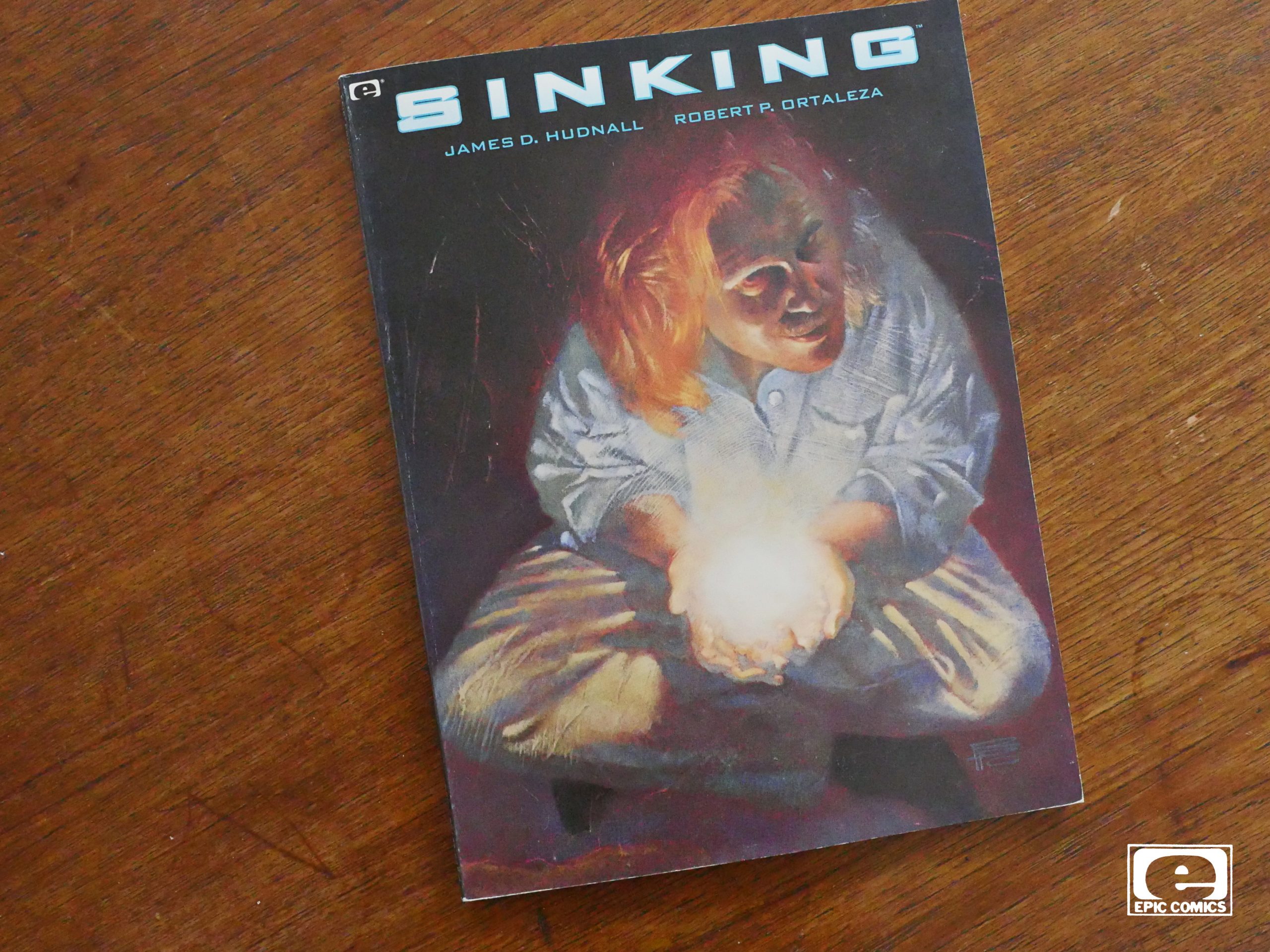 This is the final thing Epic would publish in the “album” format, and looking at the cover, it’s … gonna be a weird one? I mean, there’s a gnome with a glowing ball on the cover? Or it could just be a badly drawn guy from an odd angle.

Still not a cover to inspire the book flying off the shelves, you’d have thought.

Hudnall is the writer of the well-received ESPers series (and the Interface followup), so I’m aboard for this. 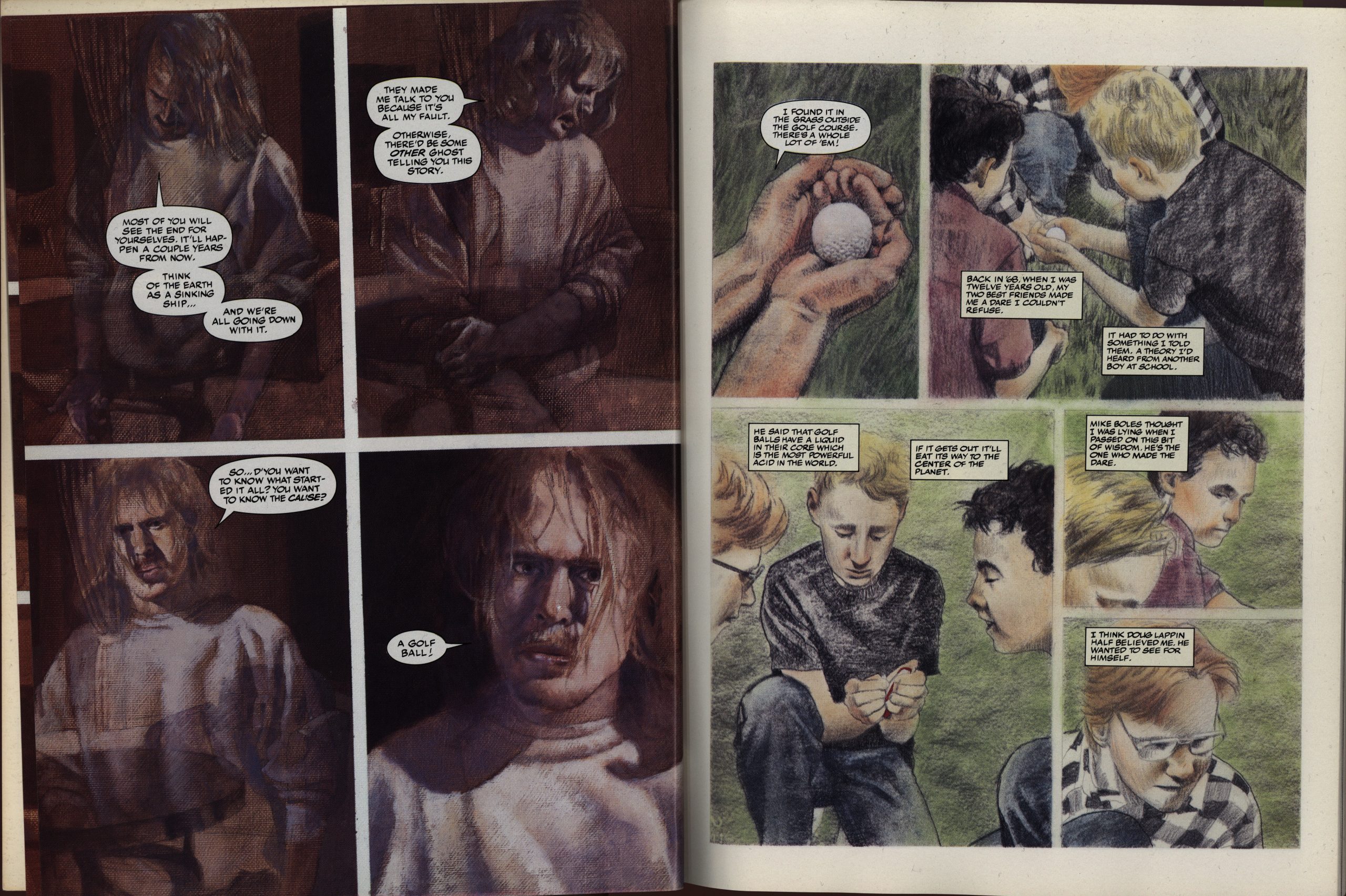 Oh deer. I’m guessing that Ortaleza didn’t have much experience with doing comics? These paintings have that unfortunate look of a fumetti — every panel looks as if they’ve been traced directly from a photo, which means that every character is as convincing as the person acting out the roles are. 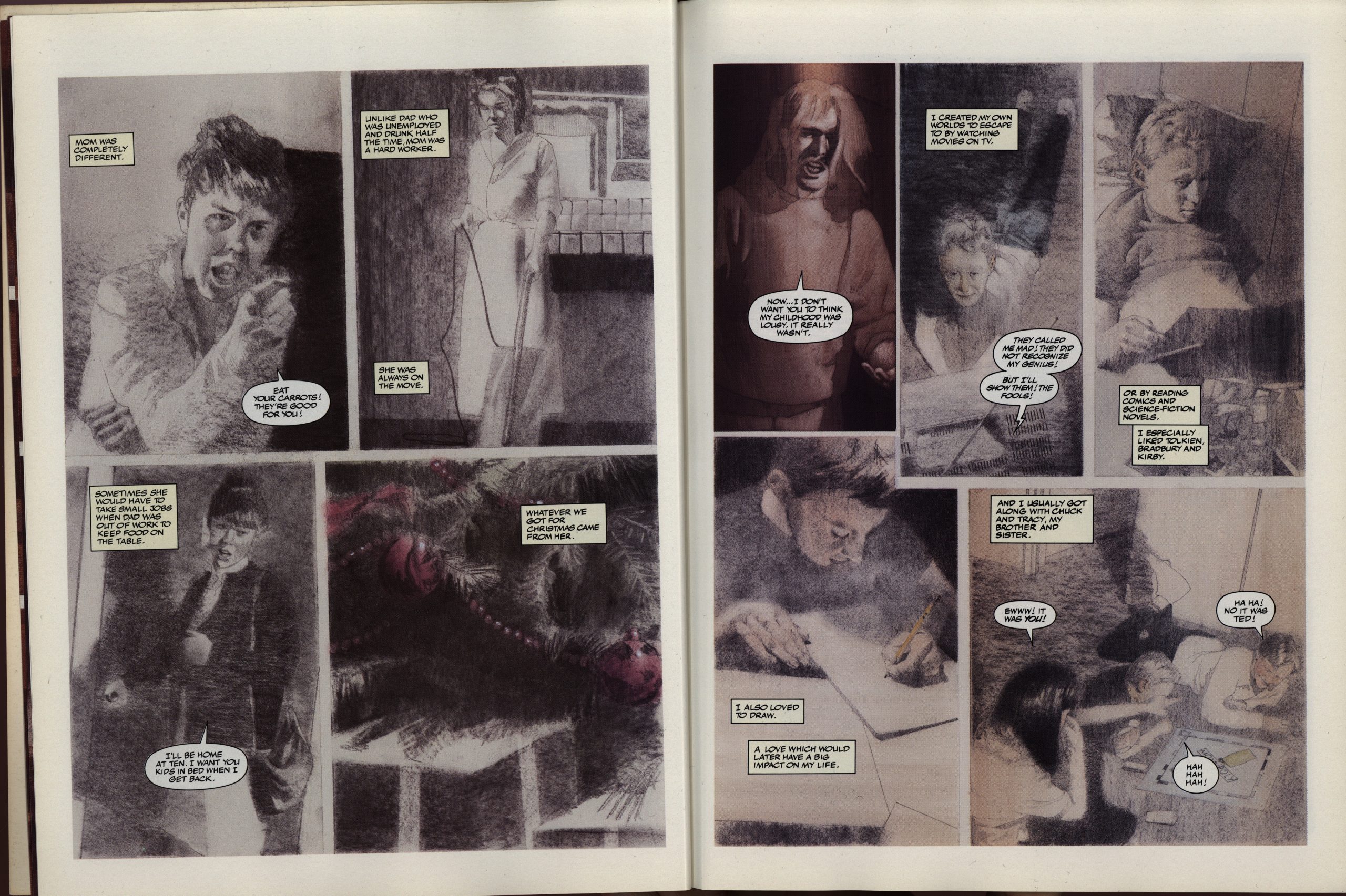 And the quality of these actors are… eh… well, you can see for yourself.

He does quite a wide range of rendering styles over the 80 pages of this graphic novel, which is something, I guess.

So what’s this story about? When I got to these pages, I had an unfortunate eye-roll accident, spraining my eyes permanently, because it seemed like this was going to be yet another comic about a sensitive nerd growing up. This is catnip for sensitive nerd readers, of course, but it’s been done to death and way, way beyond. 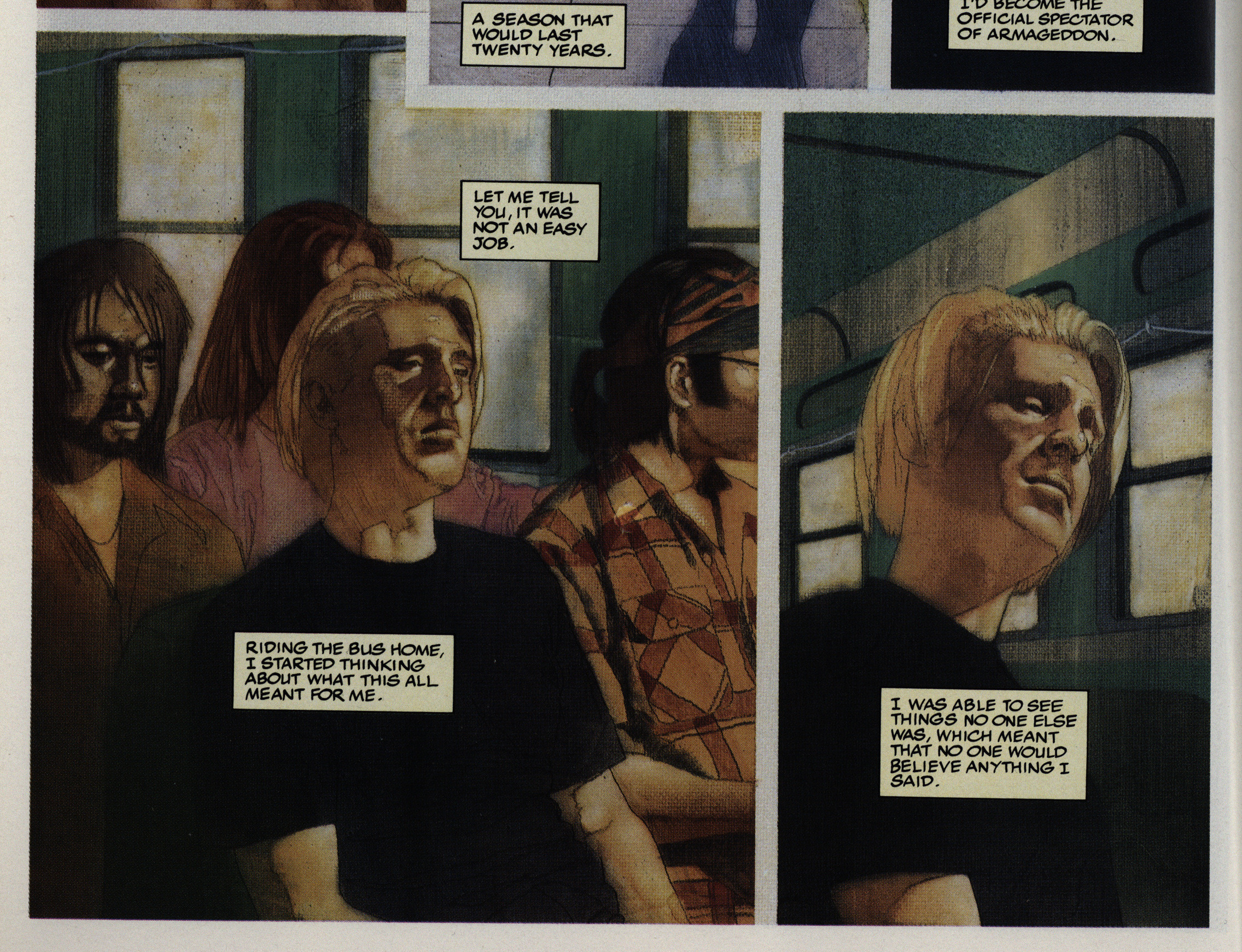 But then it takes an unexpected twist and (SPOILERS! STOP READING NOW IF YOU HAVEN”T READ THE BOOK) it’s all about schizophrenia. And not the fun TV version of schizophrenia where you get super-powers, but the sad, gruelling kind.

(Oh, yeah, he’s supposed to be seventeen in the panels above, but I’m guessing that Ortaleza’s actor was in his 40s, so he looks like he’s in his 40s.) 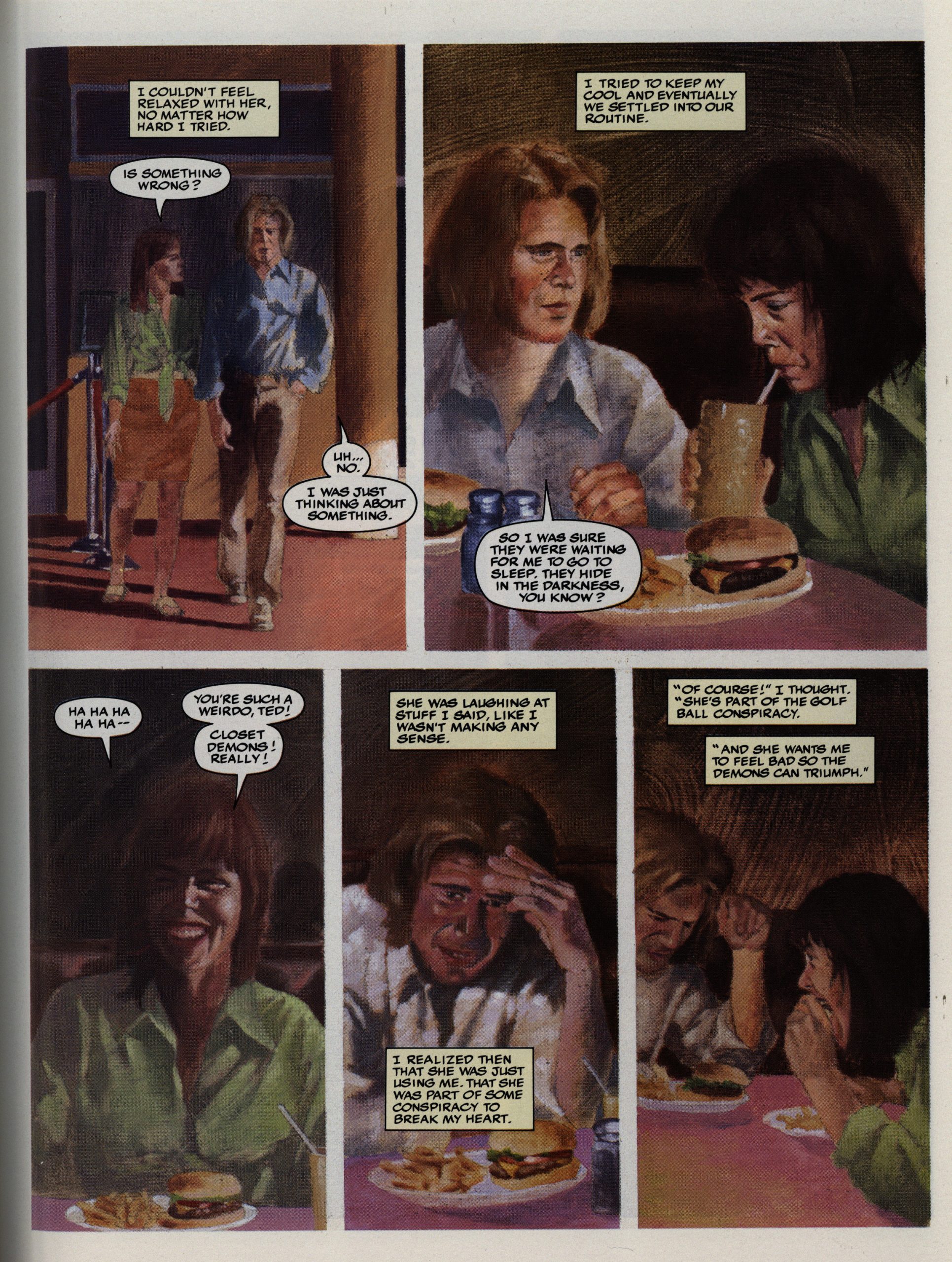 I have to say that I found most of his symptoms to be very convincing and sad, but sometimes it does turn a bit… uhm… clichéd? But I guess most insane people aren’t very original, either, so perhaps that’s not really a valid quibble. 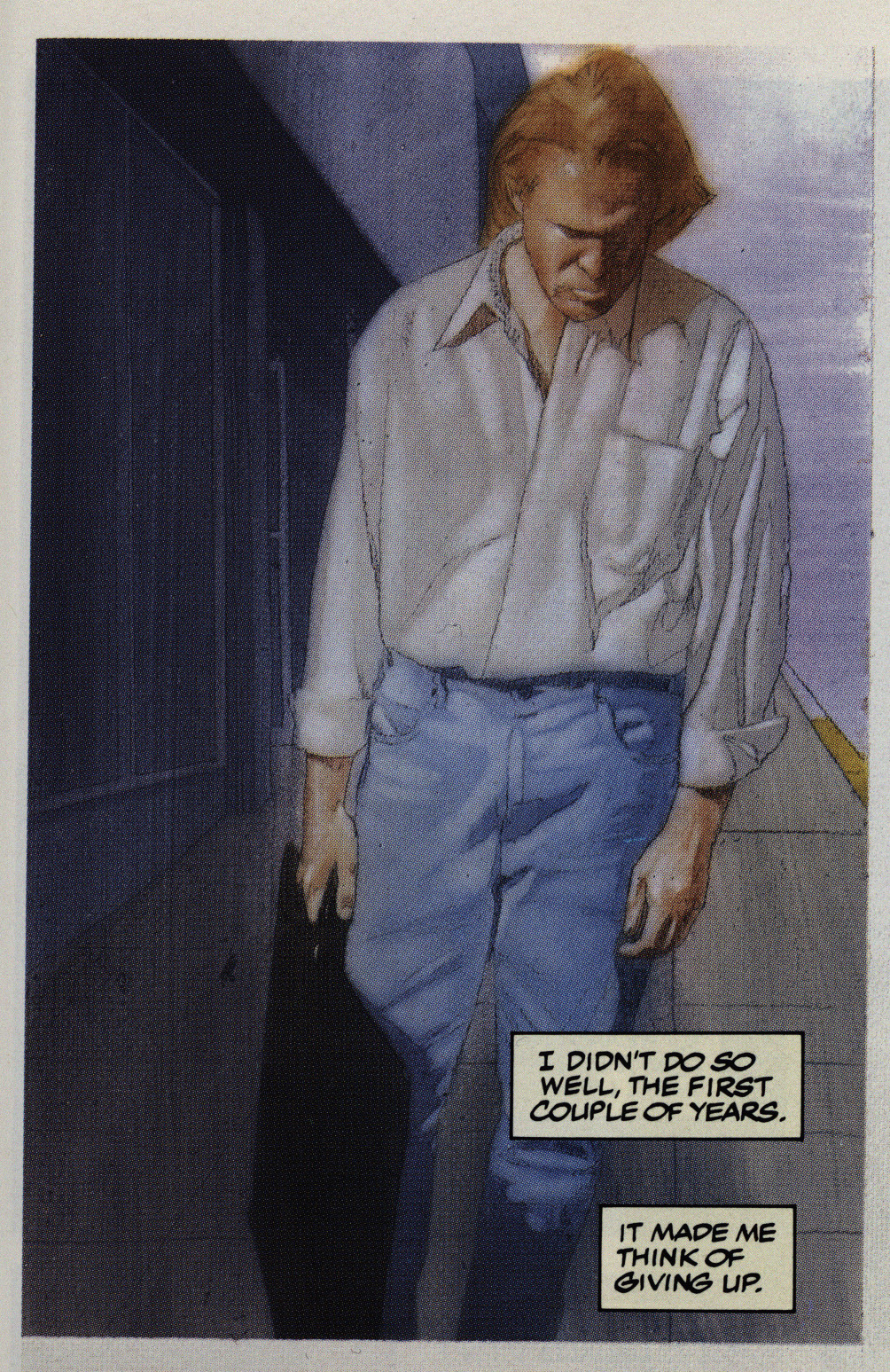 Now, that’s a painting of a picture of a really sad-looking actor.

Anyway, as a reading experience, despite the stiff, awkward figures that abound here, it’s a really positive one. There aren’t many missteps in the storytelling, and it seems much shorter than the 80 pages it occupies — it’s a sad and gripping story that seems quite true.

And it nails the ending, tying up things in a satisfying way, without being unrealistic. That is, the structure Hudnall uses here is totally on point.

Of course, if I had read the back cover first, I would have known that it was about a schizophrenic guy, and that would have removed some of the surprise at where this was going.

So don’t do that.

This book has never been reprinted, but you can pick it up for half its cover price from ebay. So I’m guessing it wasn’t a … major hit.

I have been unable to find any reviews of this book at all on the interwebs or in the trade press.