I was really in the mood to read something straightforward and entertaining today, so this seems like just the thing: It’s based on the Tekwars novels written by William Shatner (well, I’m assuming that Shatner didn’t really write them, but they were published under his name, at least).

And the series lasted for 24 issues (one of the longest runs in Epic history, but soundly beaten by Groo, which ran for 125-ish issues), so it has to be at least minimally entertaining, right? 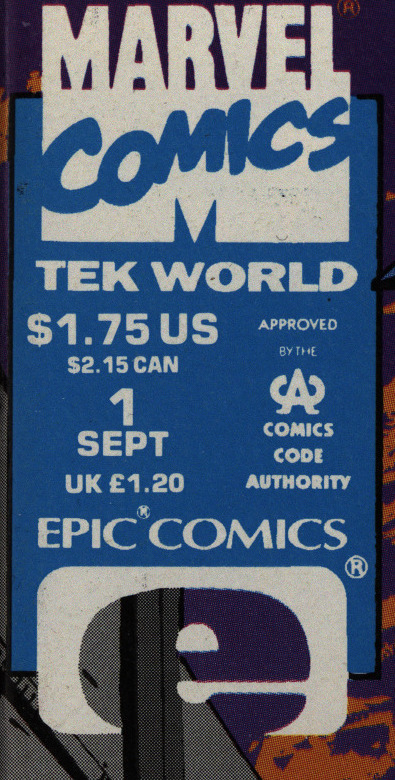 I wonder why Marvel published this as an Epic series — Marvel has published a bunch of licensed properties over the years, and this has newsstand distribution and is comics code approved… Perhaps it’s just because it somehow landed with an editor at Epic instead of an editor at Marvel “proper”? Or did Marvel just want to keep all the sci-fi stuff over at Epic? I have no idea. 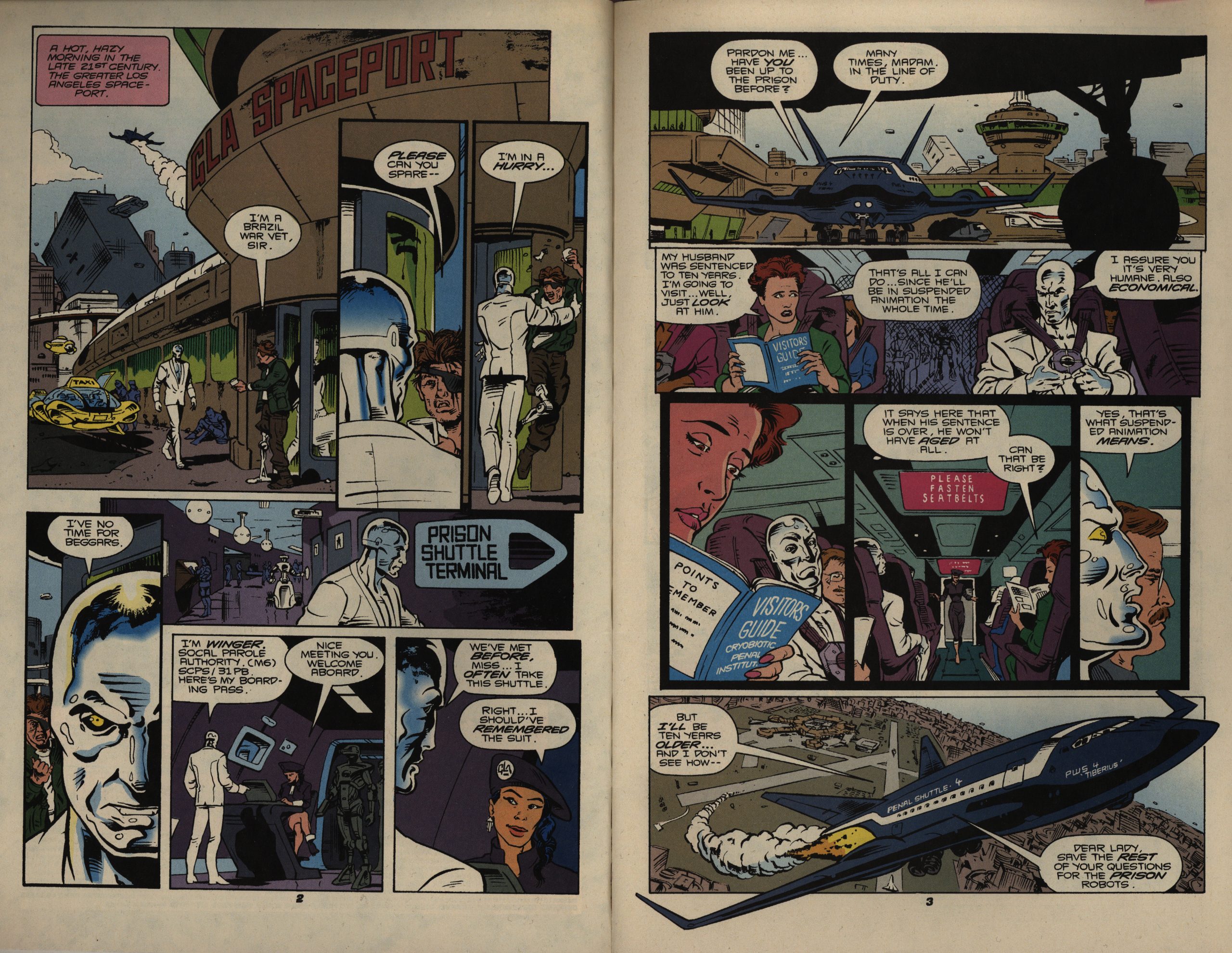 Lee Sullivan does that artwork on most of the issues (about two thirds, I think?), and he does both pencils and inks. Which is quite an achievement on a monthly book, even if there’s just 22 story pages per issue. (Epic comics usually run for 28 pages.)

It’s difficult to be enthusiastic about the artwork, but it’s… it’s fine. The storytelling is sometimes slightly hitchy, but it’s pretty solid. It’s professional. 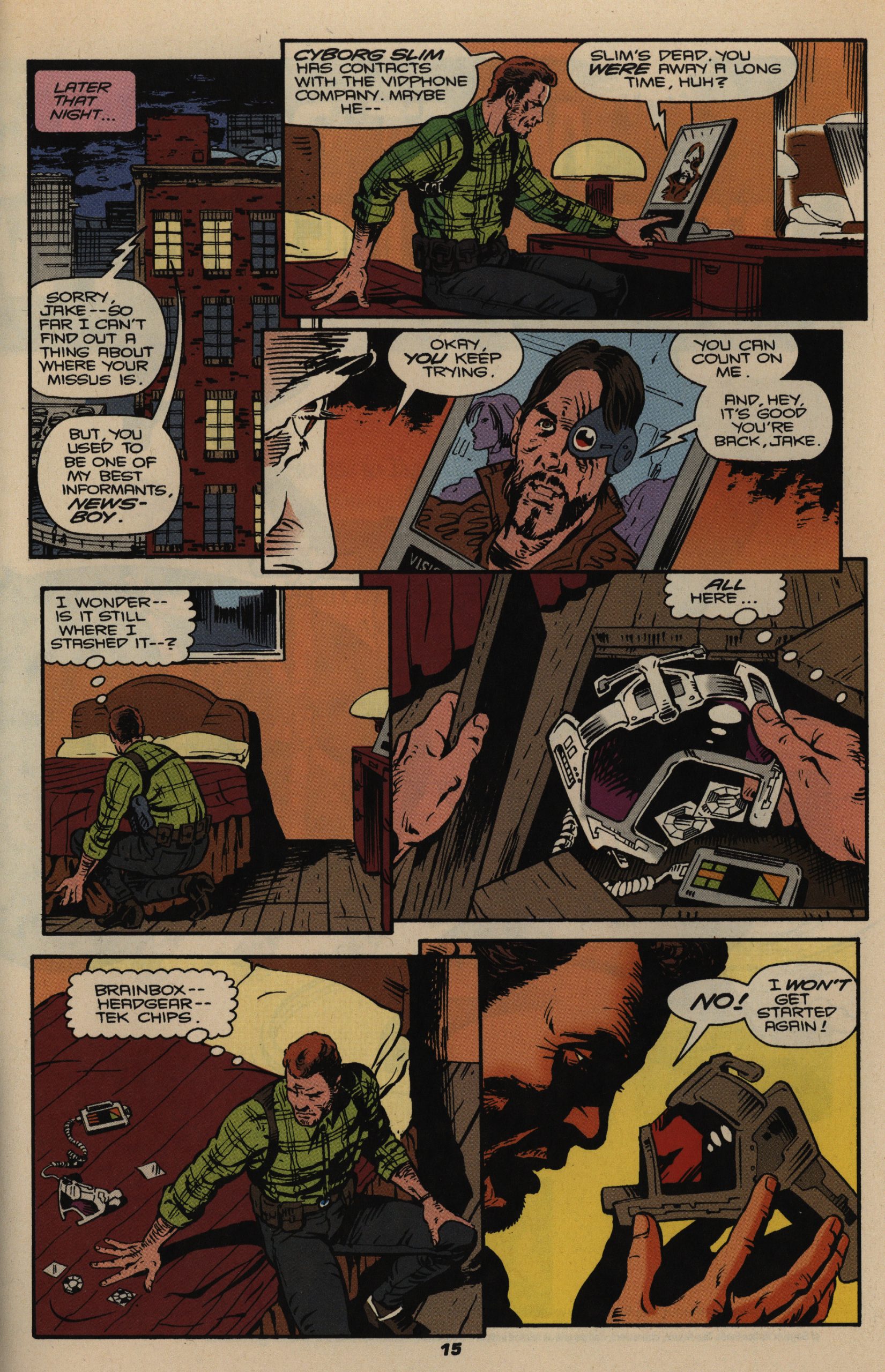 The protagonist is a private dick (called Jack Cardigan, presumably because Jim Sweater was taken?) with a drug problem (of the VR kind, because this is sci-fi). He used to be a cop, but he was framed etc etc you’ve all read and seen the exact same character a gazillion times before.

But it’s fine; there’s nothing annoying here — everything runs along smoothly on battle-tested rails. 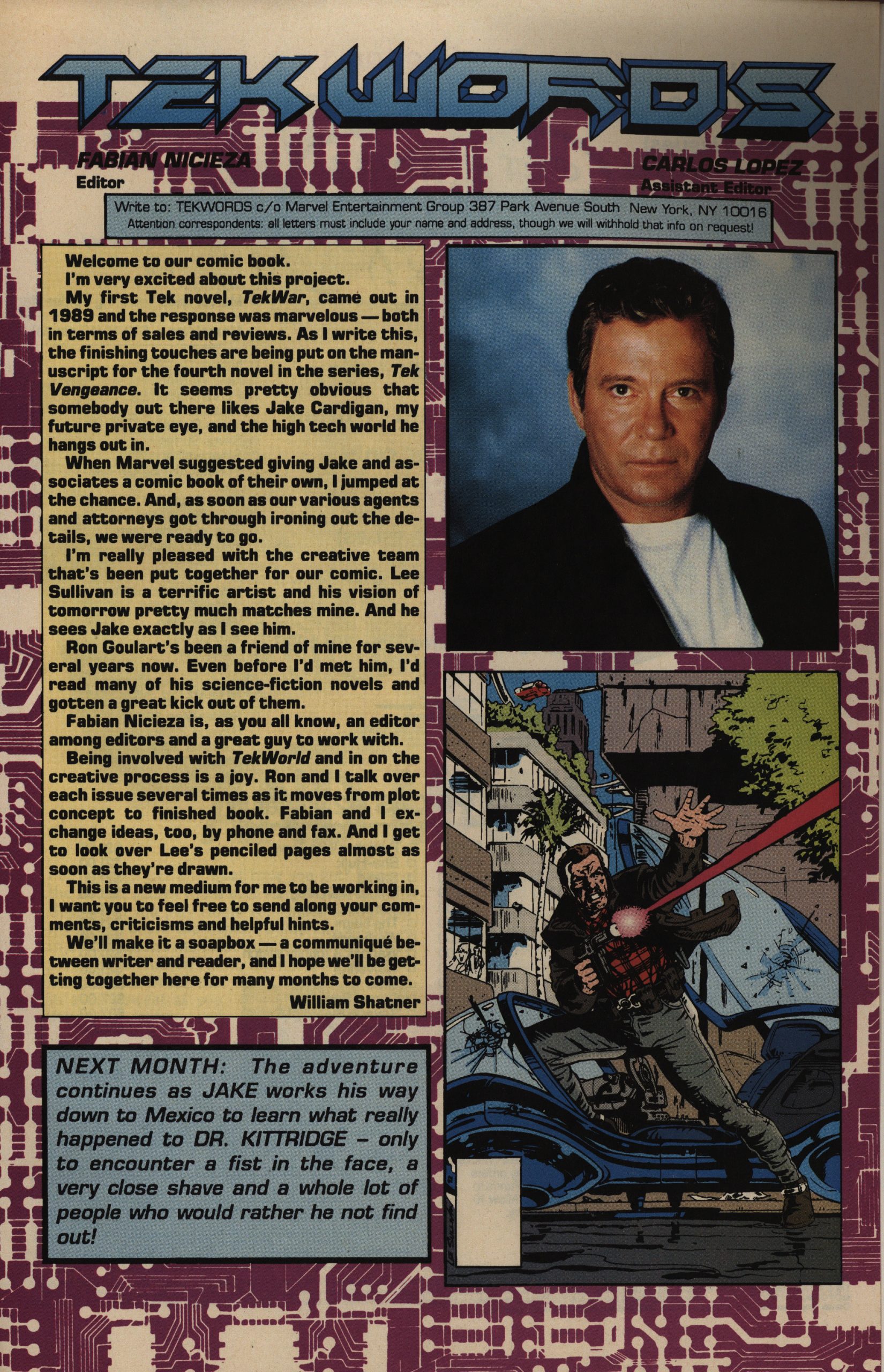 The first few issues, Shatner himself pops by to say a few words, but he gets busy with the Tekwars TV adaptation after a while. 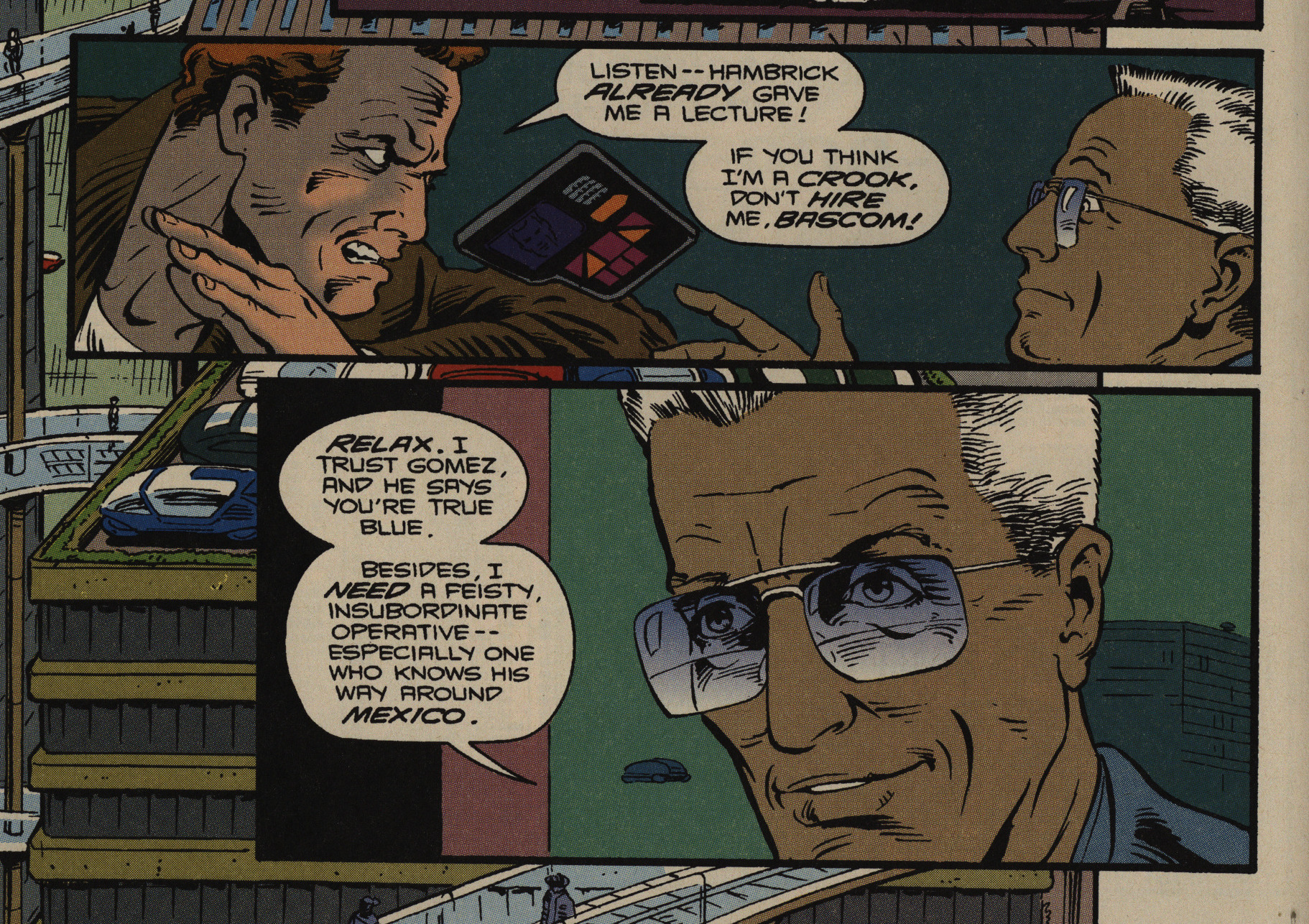 Oh, yeah, he works for an agency that needs a feisty, insubordinate operative. It’s a match made in heaven!

The first half dozen issues apparently adapt the first Tek novel, and then Goulart does his own stories. 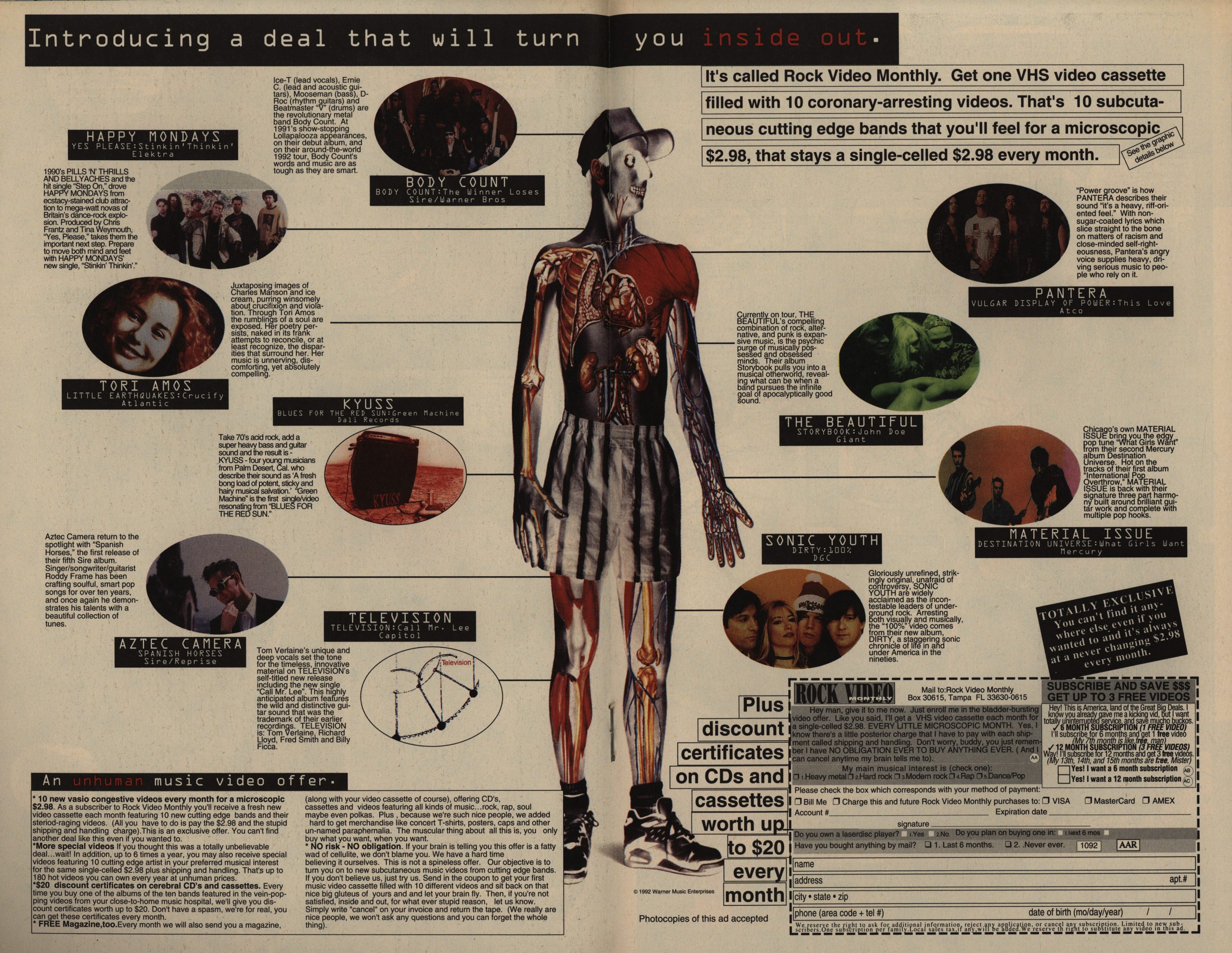 Heh. A subscription service? That will send you… ten music videos per month? For $3 plus shipping and handling? $3 is cheap for a VHS tape, but I’m assuming that the profits are in the unspecified shipping and handling. $20 handling? I have no idea. The selection of videos, though, is quite fun. Happy Mondays, Body Count, Tori Amos, Kyuss, Aztec Camera, Television, Pantera, Sonic Youth? That’s pretty eclectic.

I had no idea that something like this existed, but I guess everybody didn’t have MTV… 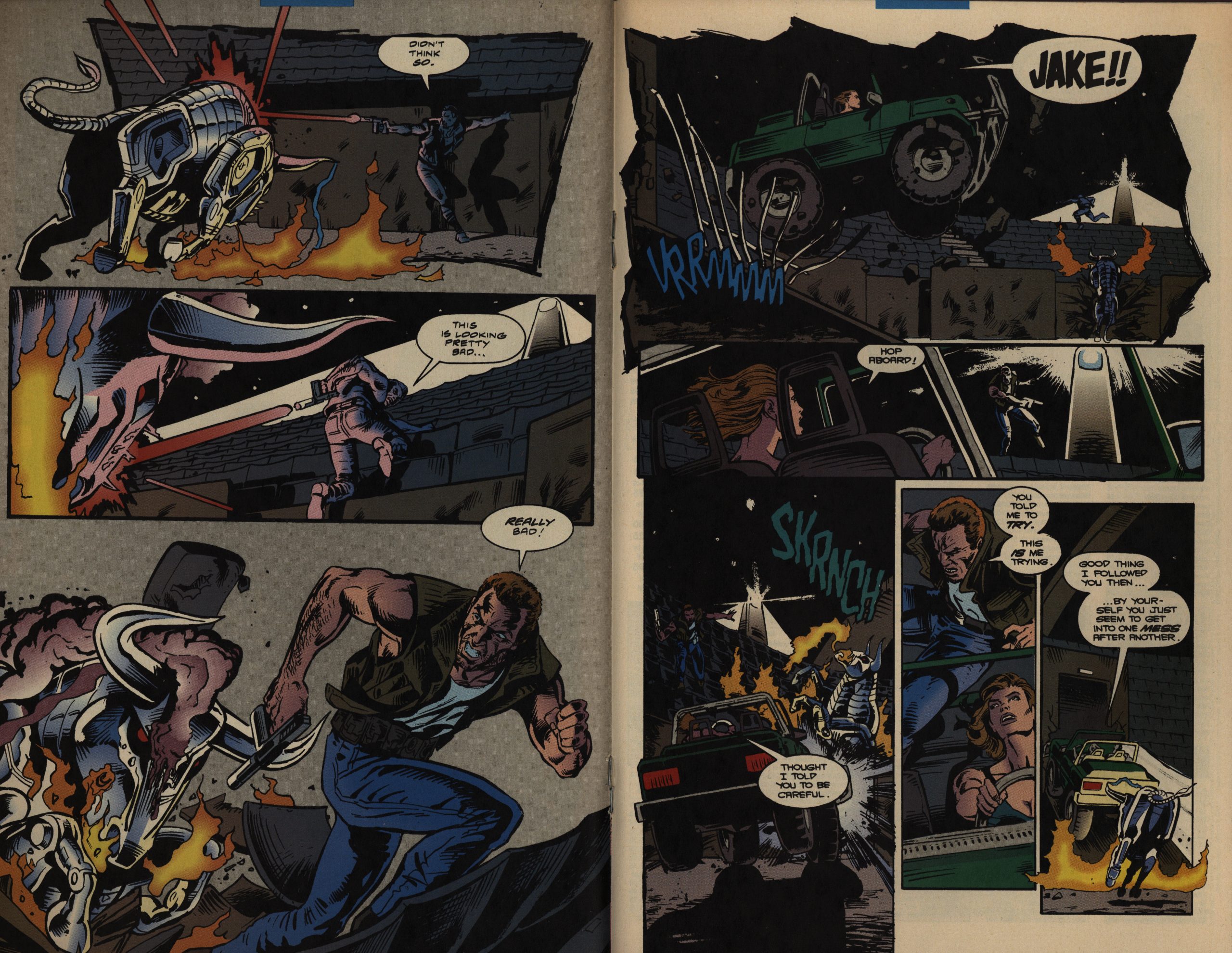 Action! Robot bulls! Trucks! Guns! This comic has it all. 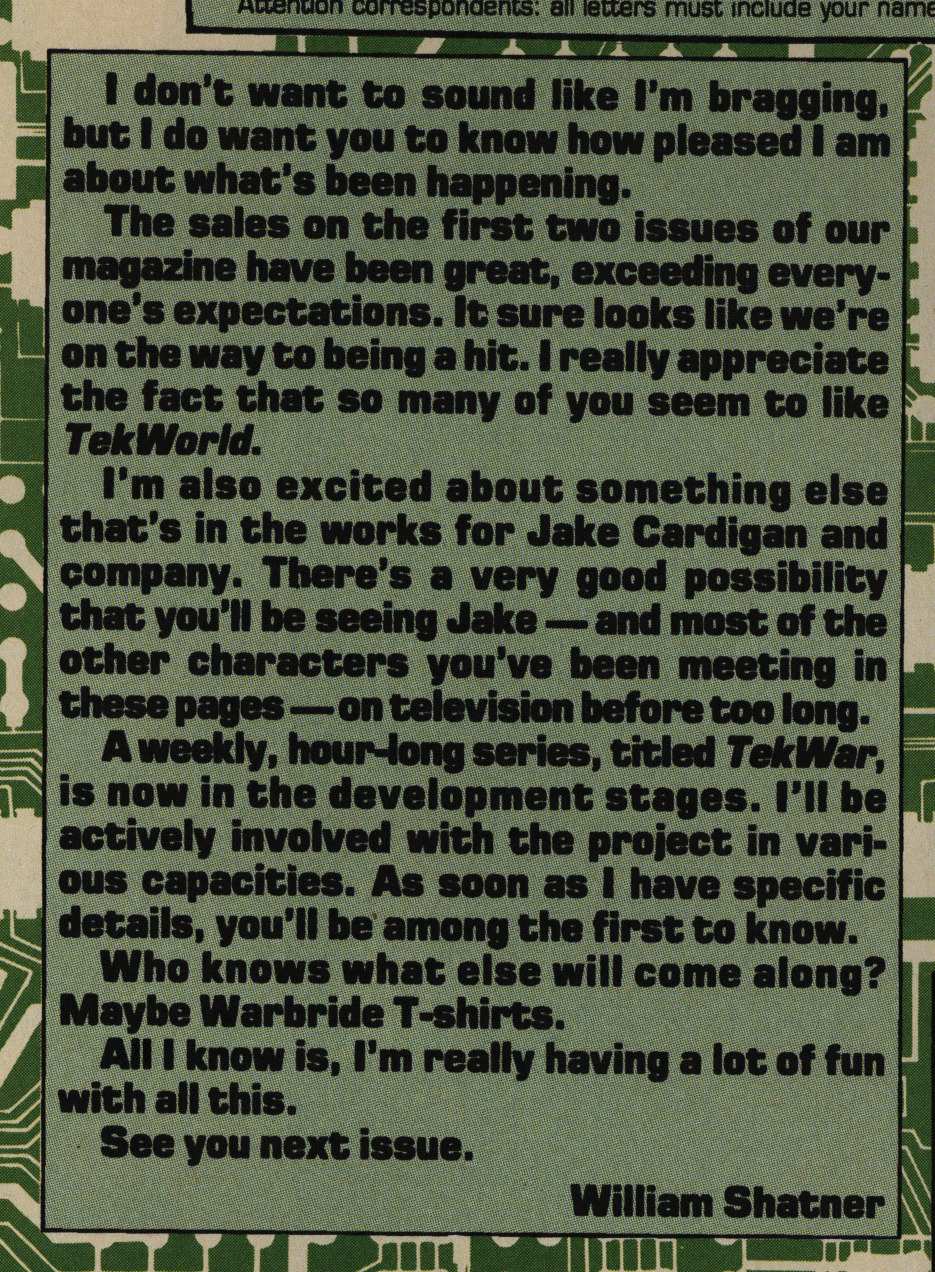 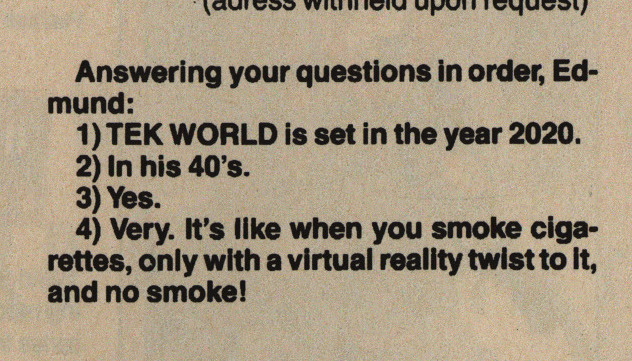 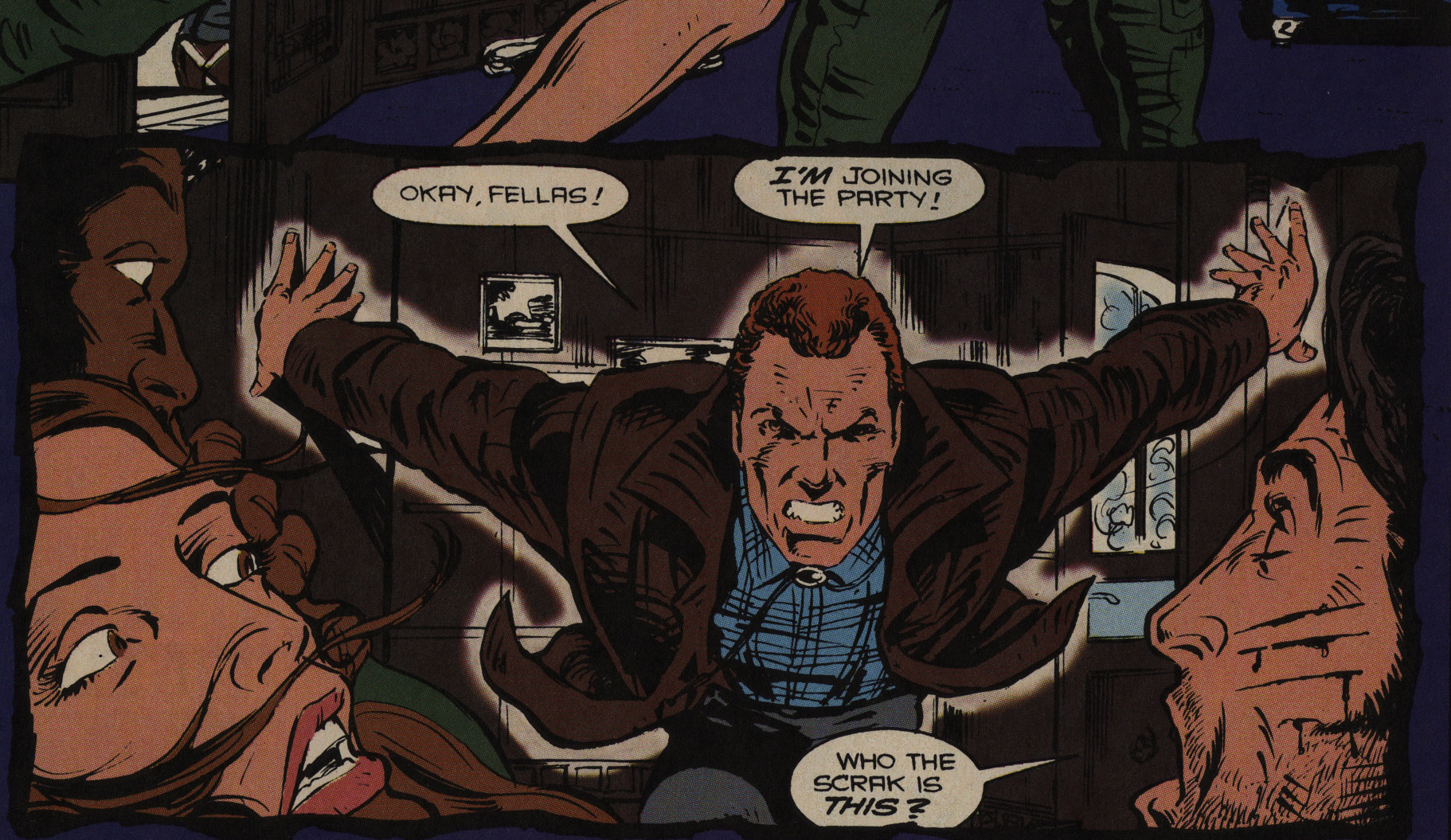 Q: If you have a guy in a brown jacket in front of a brown background, how do you make him visible to the reader?

A: You make a kind of white halo around him.

Q: What would be a reasonable way to talk to somebody in a different city?

A: You have some cops drive to the person you want to talk with, in a van that carries a holoprojector in the back, so that they can talk to a two meter high levitating head. 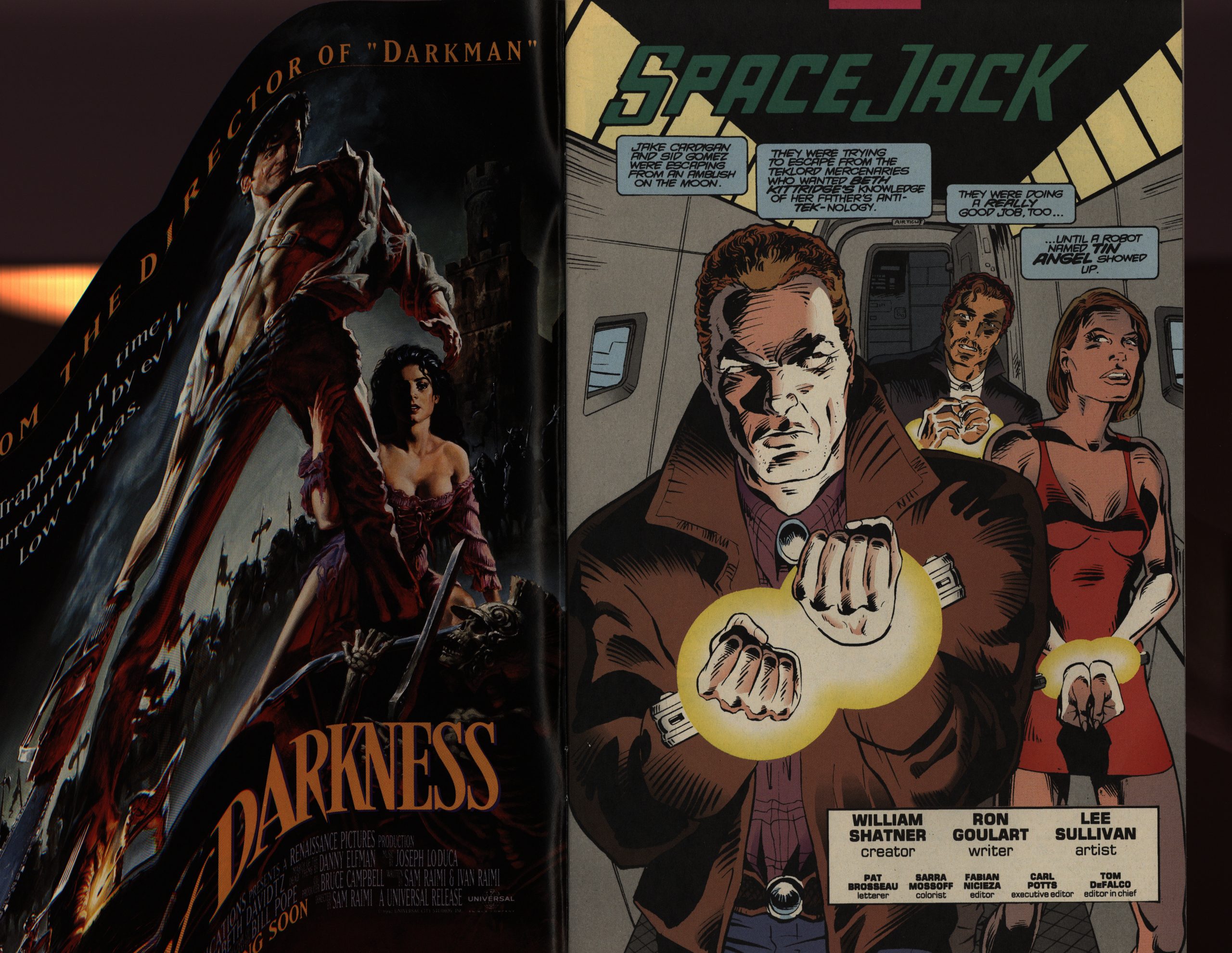 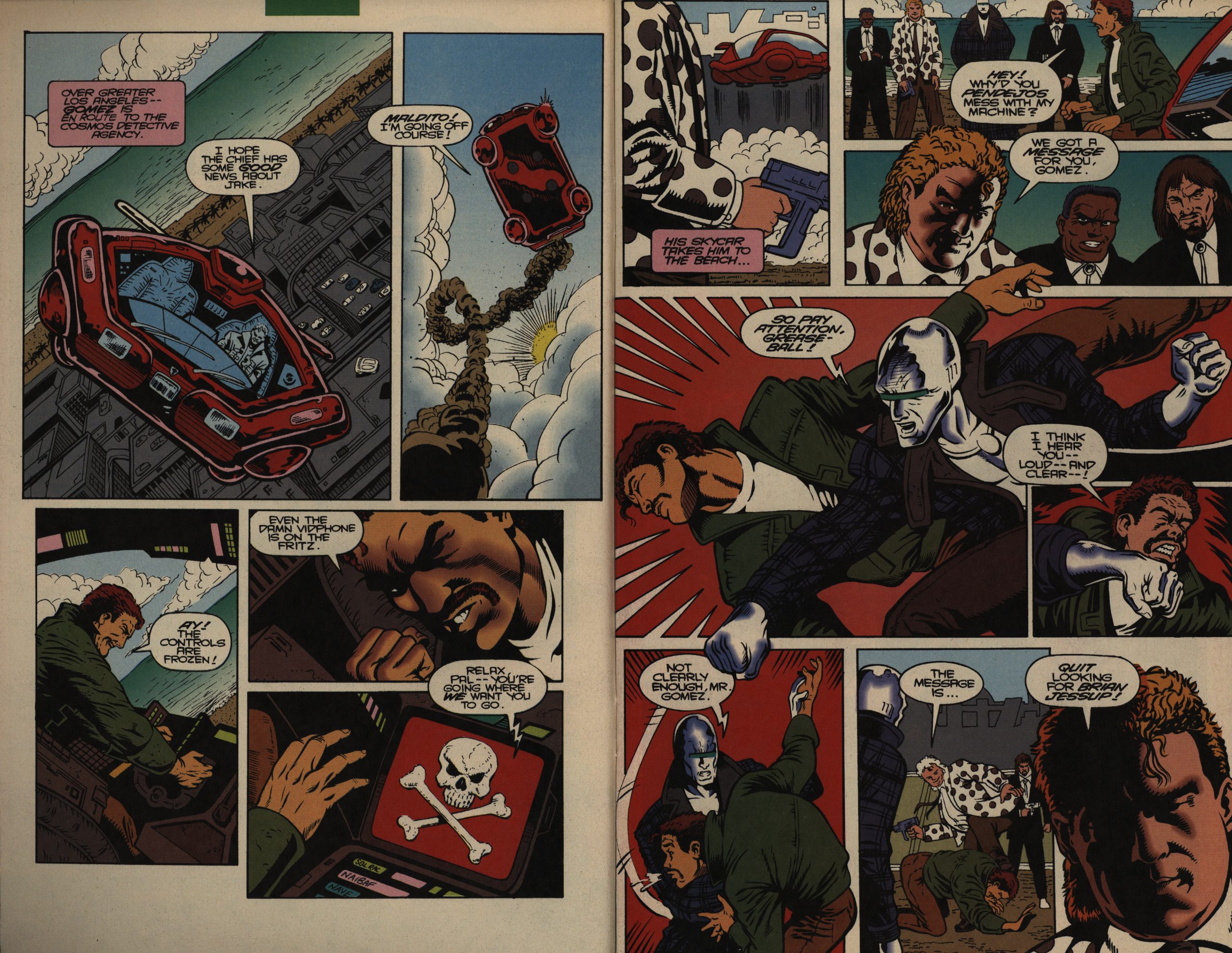 Sullivan had to take a break, so we get Stephen B. Jones and Boyd/Akin for a few issues. They don’t much like drawing backgrounds, and everybody turns cartoonish.

And their heads are mostly made out of silly putty. Nice chin, dude. 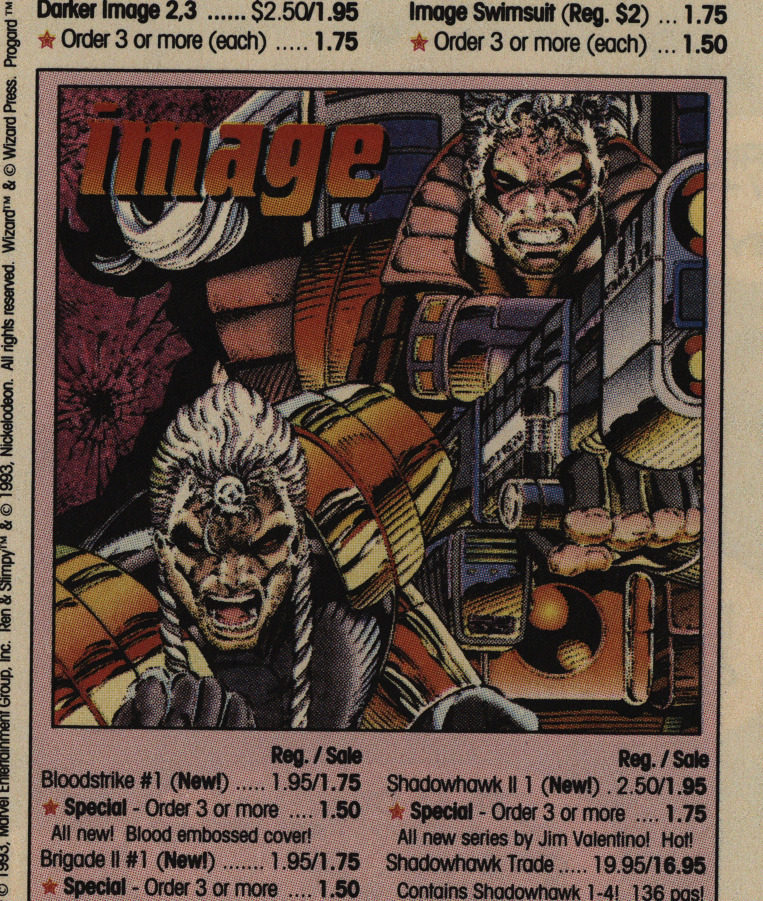 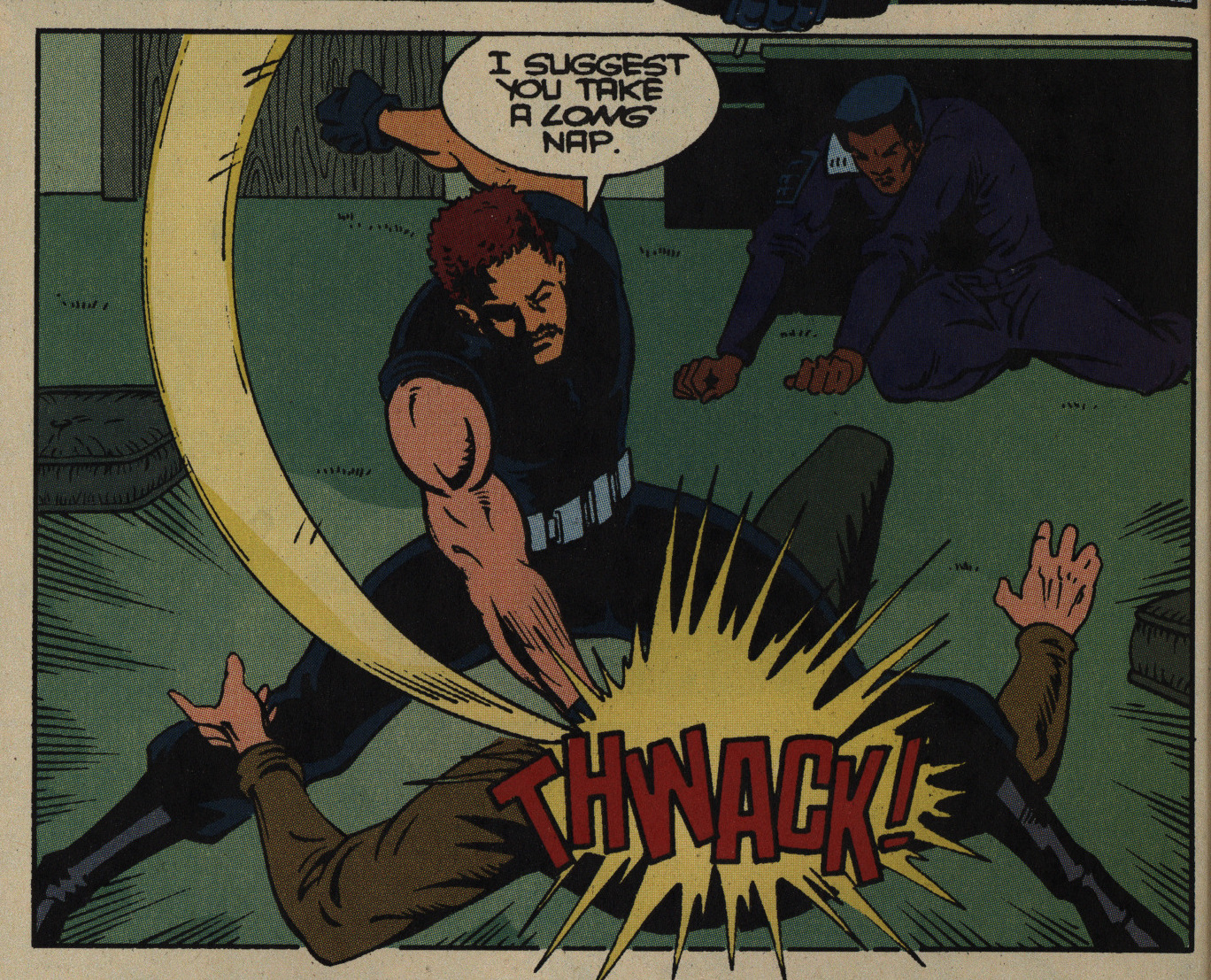 Jones keeps on Jonesing: Awesome THWACKing posture, dude. And that arm in the back there doesn’t look uncomfortable at all.

And… I love that thong and string bikini on that metal-bodied cyborg in the second panel.

Hey! A bullpen note about the second wave of the Heavy Hitters thing over at Epic. Tekworld wasn’t part of that, though.

Unfortunately, Sullivan leaves again, and we get a stretch of comics drawn by Rich Suchy and John Stanisci. And man, as bad as Jones was, this is pretty hard to take. How is that body even supposed to hang together? Everything shifts wildly and nonsensically in size between panels… look at the sizes of those lapels on that coat? And Sweater’s head shifts from one bizarre mould to another constantly. And how are these characters positioned in relation to each other? Is she in front or in back of Jim Sweater? What are those snow boots he’s wearing?

It’s pretty hard to take much note of the plot when things look this amateurish. Huh. I’m guessing this is an ad for the X-Men animated series, although it doesn’t say that? Anyway, you can get “NEW” VHS tapes, at $10 at pop, for 25 minute animated X-Men shows at a pop?

That seems rather exorbitant to me, really. Poor kids back then. 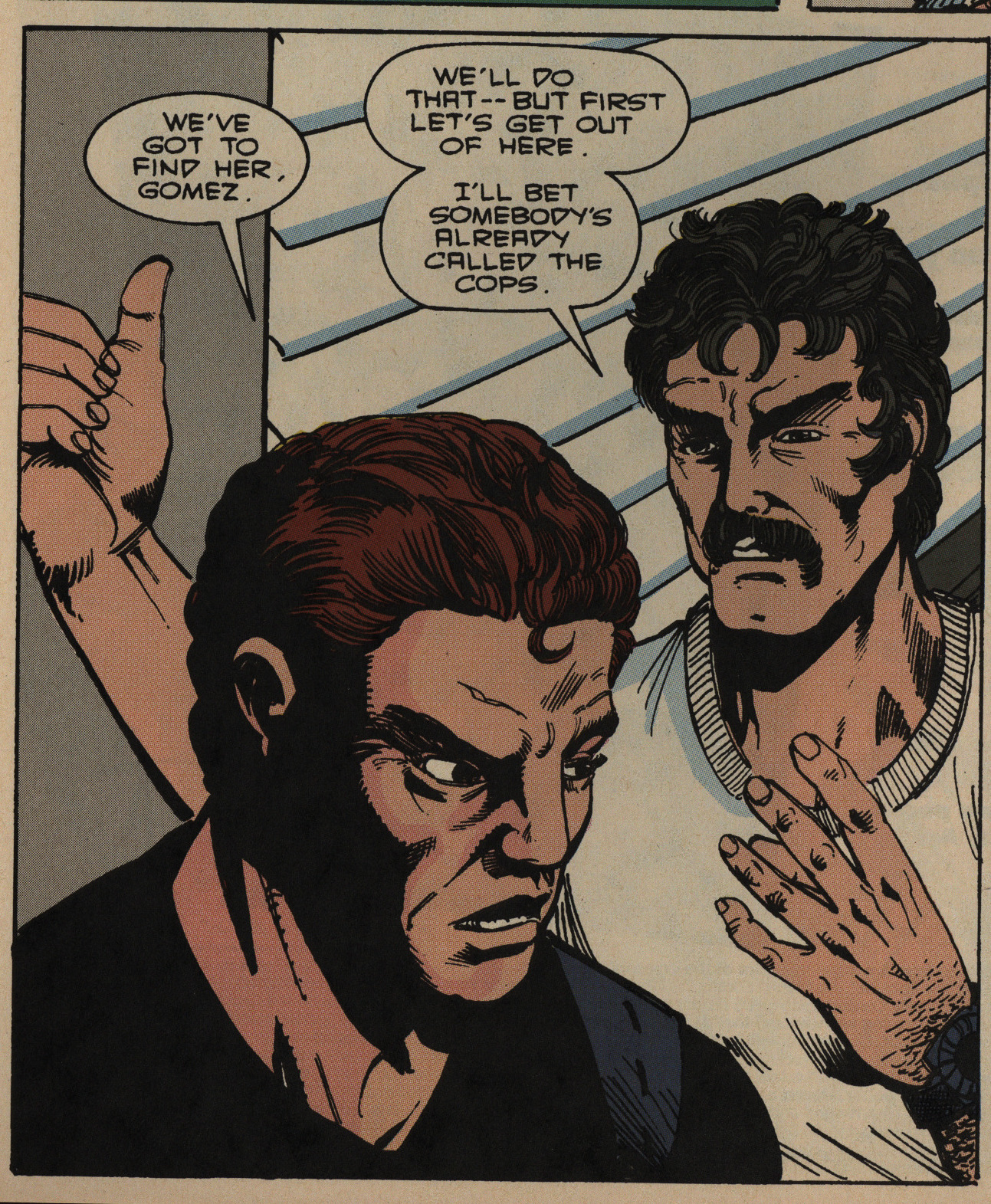 The artwork is just… grotesque. 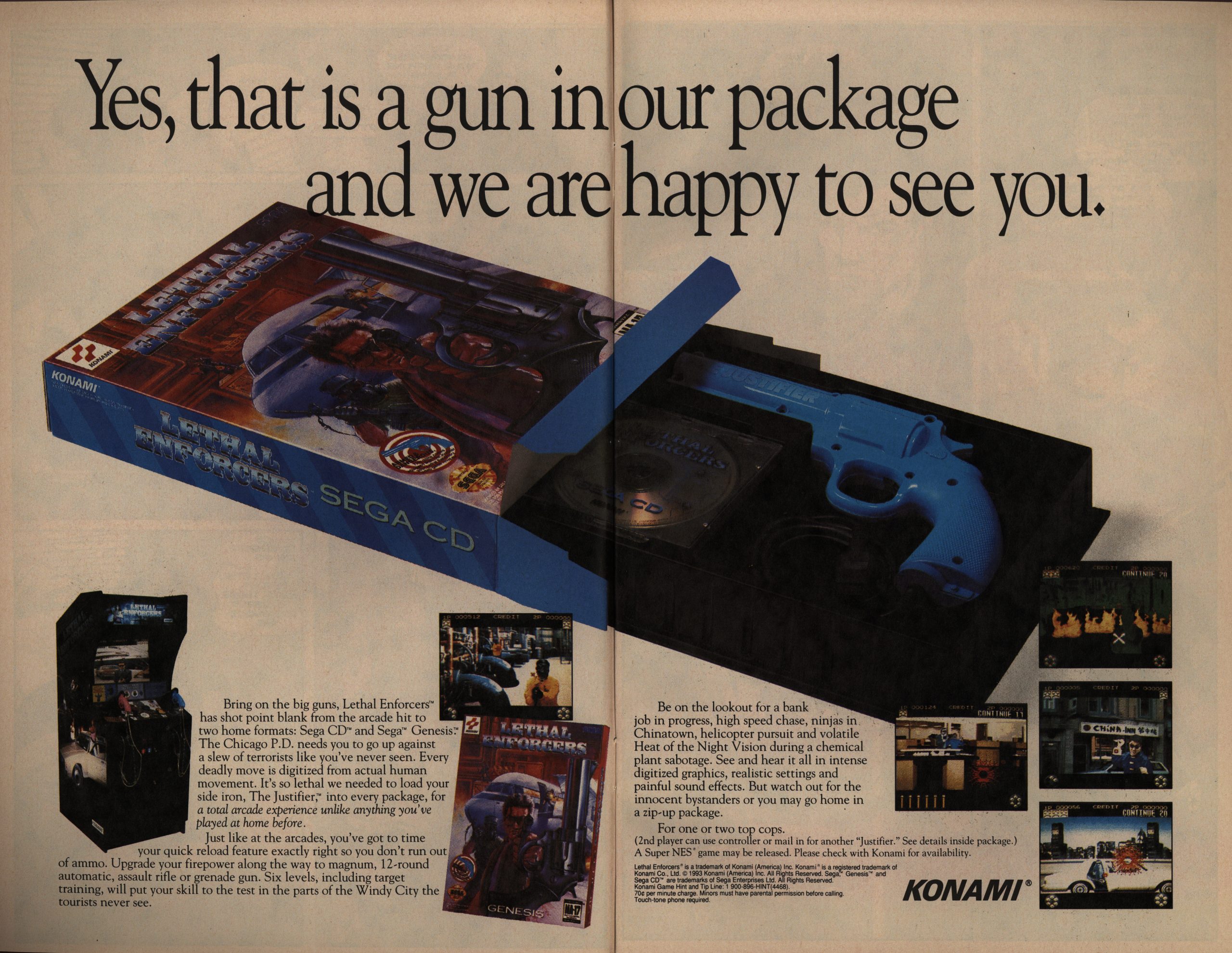 “Yes, that is a gun in our package and we are happy to see you.” That seems so wrong on several different levels… 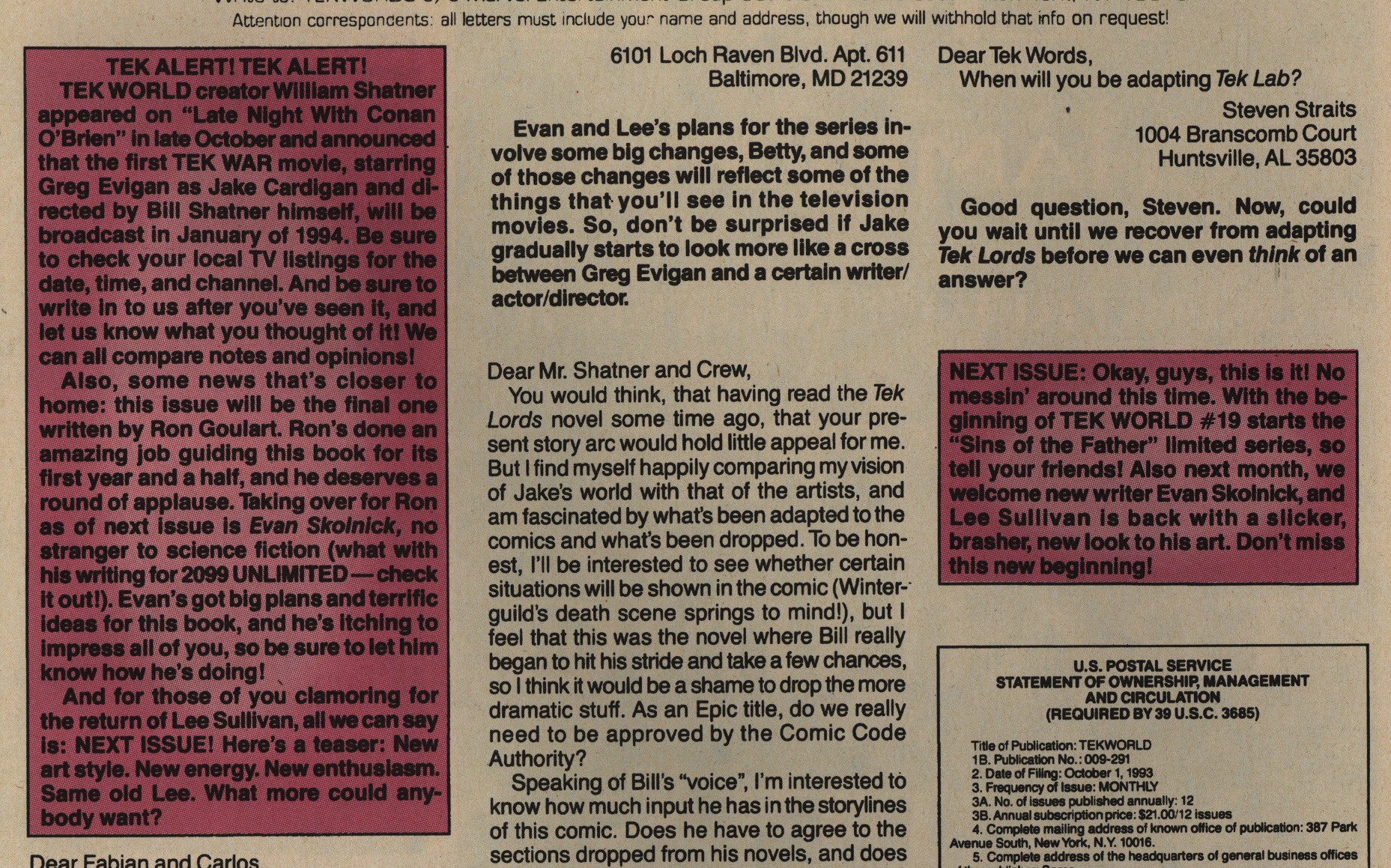 We’re told that Suchy’s reign of terror is over, and that Sullivan will return with a new art style, and new enthusiasm, and that’s it’s a slicker, brasher look. 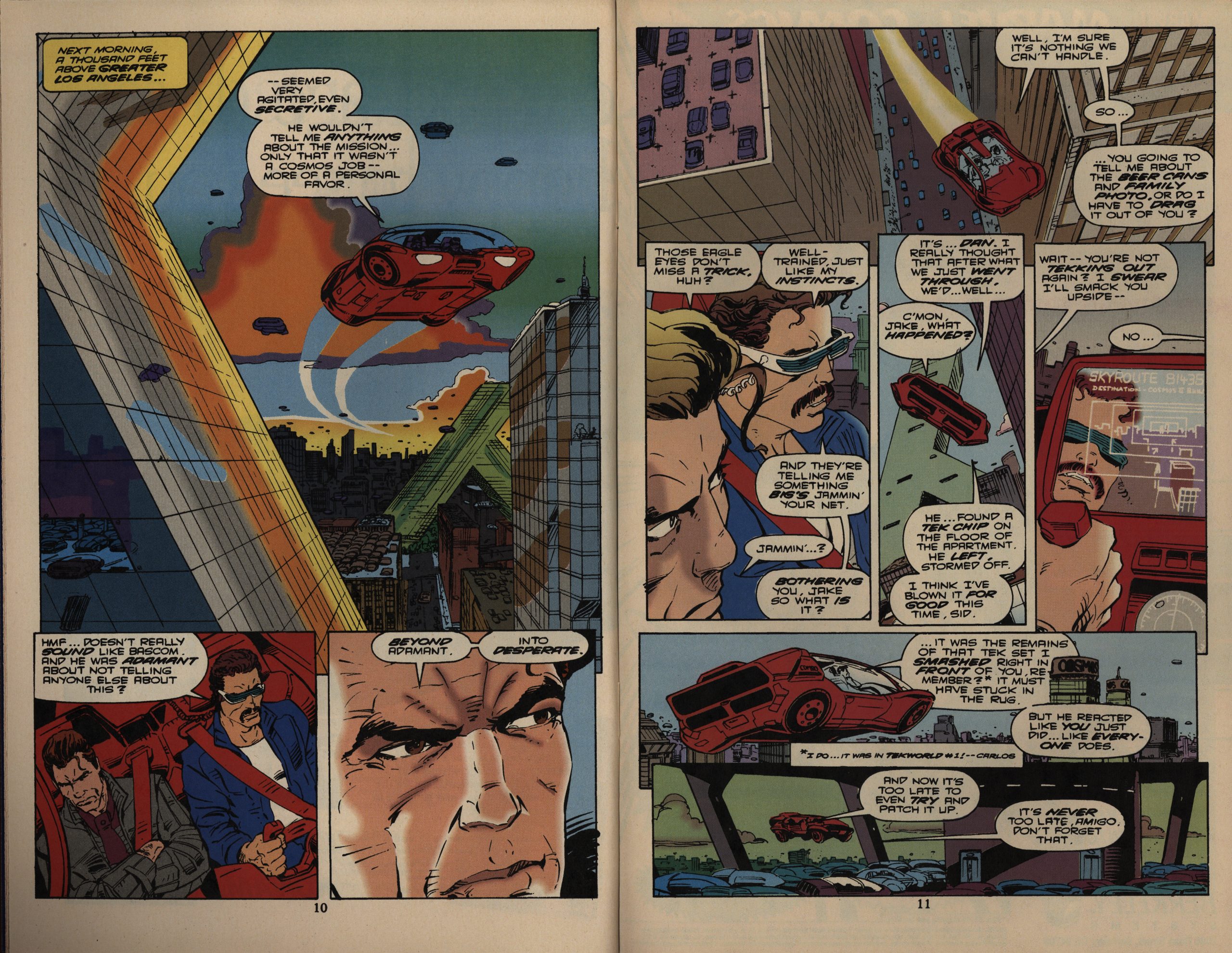 And… it is indeed a more fun style. He’s obviously looking at what’s popular at image, but not overdoing it. Sweater gets a leather coat and stuff, but he doesn’t put pouches everywhere.

Hey! That’s a new style! It’s a computer simulation, so it can be all arty. The new writer pops in to say hi. 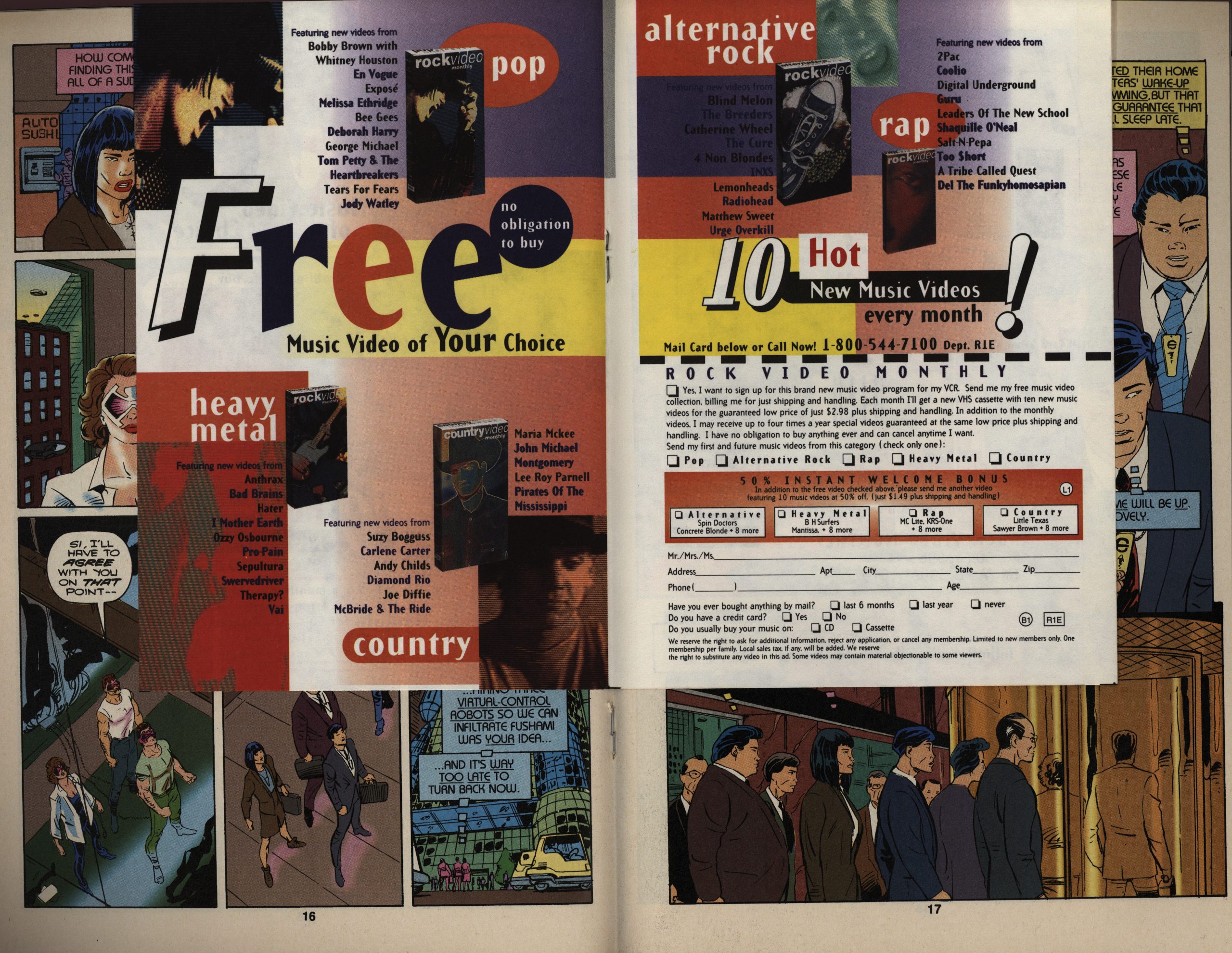 Hey! The people selling those music video tapes are still at it, two years later. Still the same $3 price; still the same unspecified shipping and handling. But now they have more genres, and the artists they use as examples are definitely more mainstream (Whitney Houston, En Vogue, Bee Gees etc). By now, the Tekwar TV series had started, so we’re getting a pin-up. 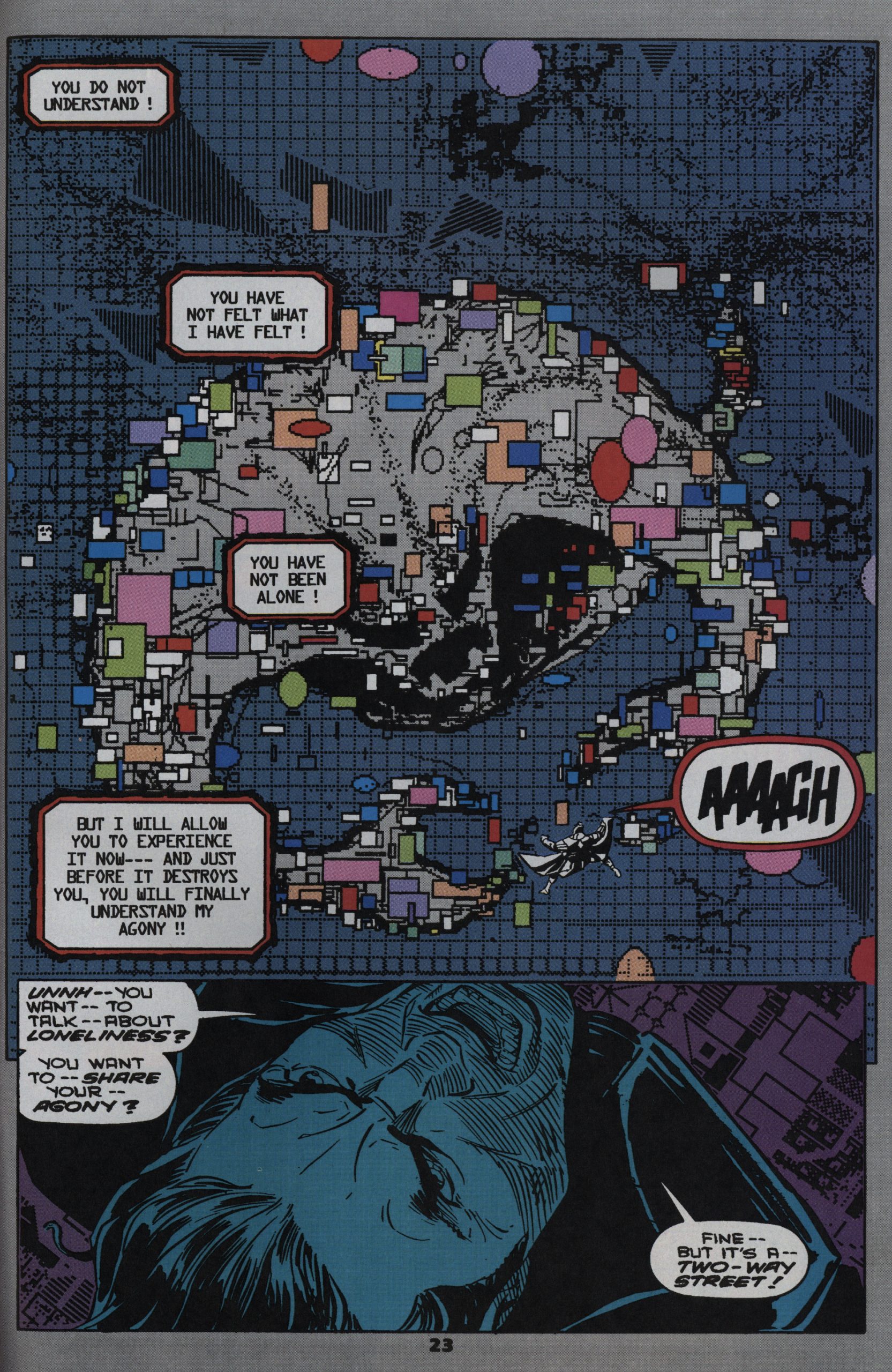 Sullivan continues to experiment, and it makes reading this a lot more fun.

Oh, yeah, I haven’t really said much about the plots and stuff. And that’s because I don’t really have much to say: They’re fine. If these had been TV series episodes, it would have been a perfectly acceptable sci-fi TV series: There’s some intrigue (but not a lot); there’s a bunch of different characters (but not very distinct); and it all… it’s fine. The most surprising thing about the book is that it’s cancelled just a few month after the TV series started. For the final issue, they print a blurry snap of Shatner on the cover… … and then announce that it’s cancelled. “There are many reasons” for the cancellation, but he doesn’t mention any of them. Did Shatner pull the rights for doing the adaptation now that it’s worth more, since there’s a TV series or something?

This series has not been collected or reprinted.

Sadly, at this point (after two years and before the series aired) the book was dropped by Marvel because ‘licensed product’ was out of favour with the management of the time and also due to reduced sales figures – see above!

I’m unable to find any reviews of this series on the interwebs, which surprises me.