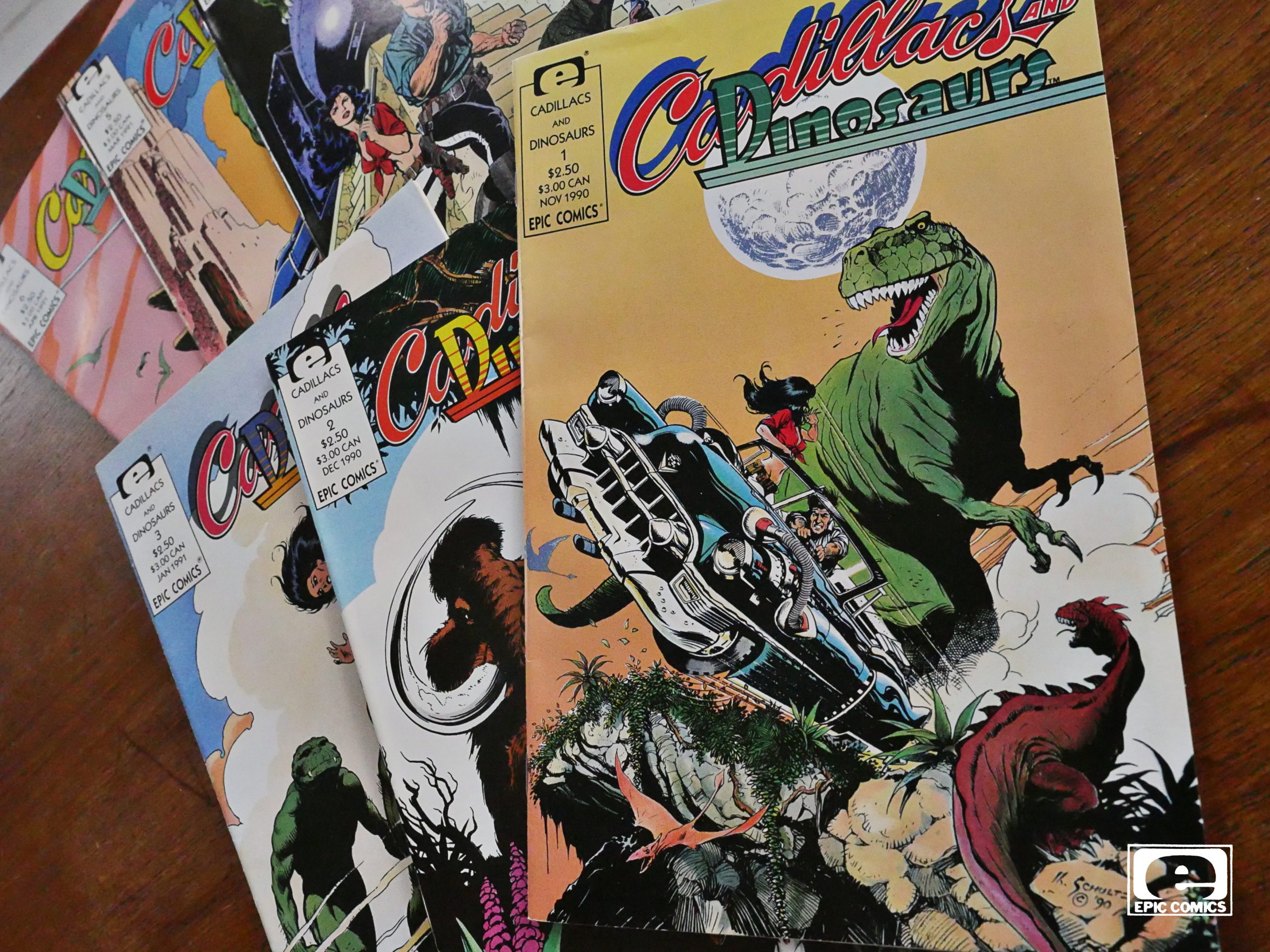 This is a reprint of the Xenozoic Tales series published by Kitchen Sink. It’s not the first comic that had landed at Epic this way: ElfQuest was also reprinted and published for the newsstand market by Epic. 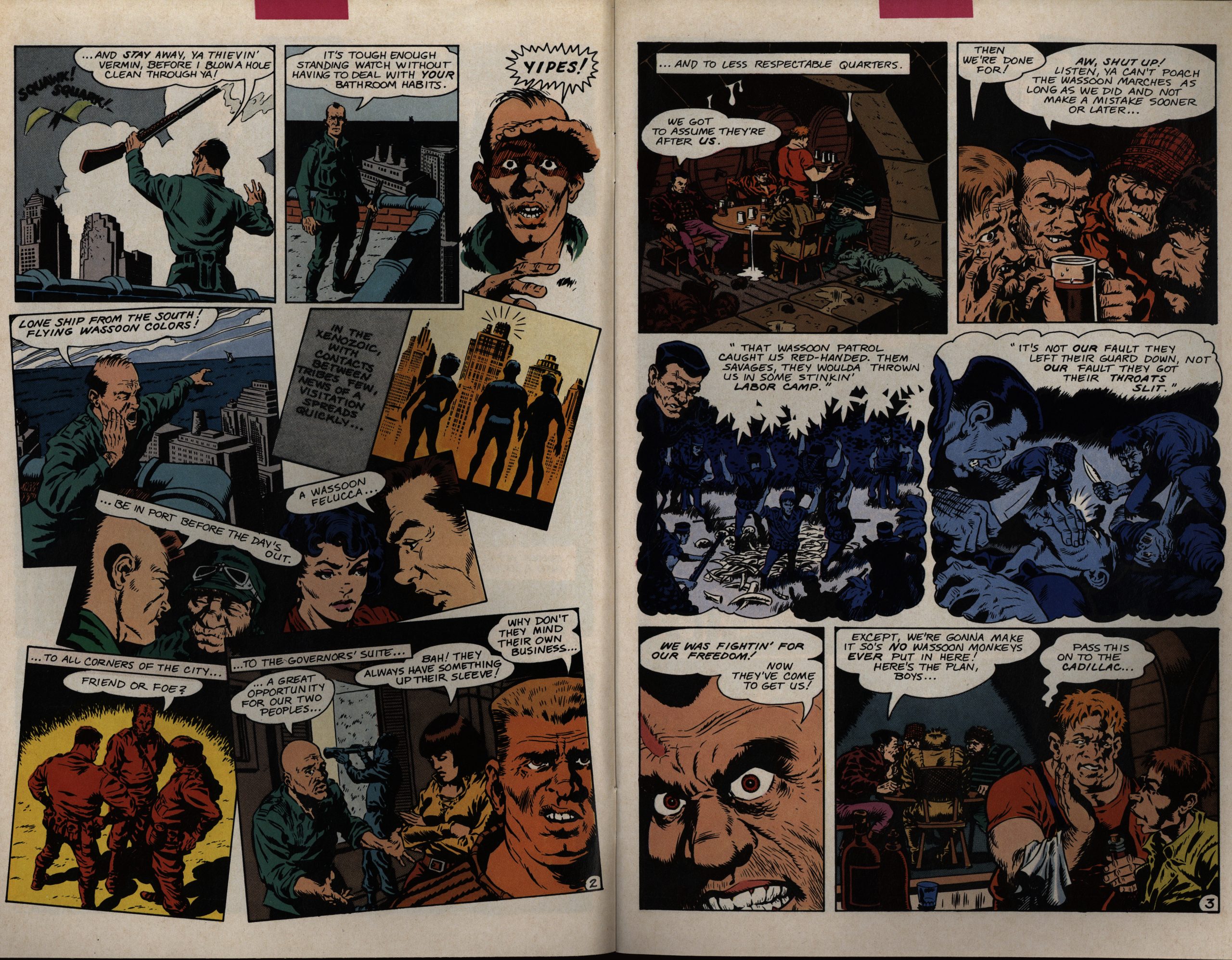 However, that was a complete story, and it was reprinted on newsprint, so it was a new, cheaper edition for a larger public. This is… a more expensive edition? And the story was by no means complete when this was published (was it ever?), but I guess it’s still makes some financial sense to push this to newsstands?

I have no idea, but it certainly looks handsome here. Schultz is, of course, really good at recreating the look and feel of EC comics (and in particular Wally Wood). 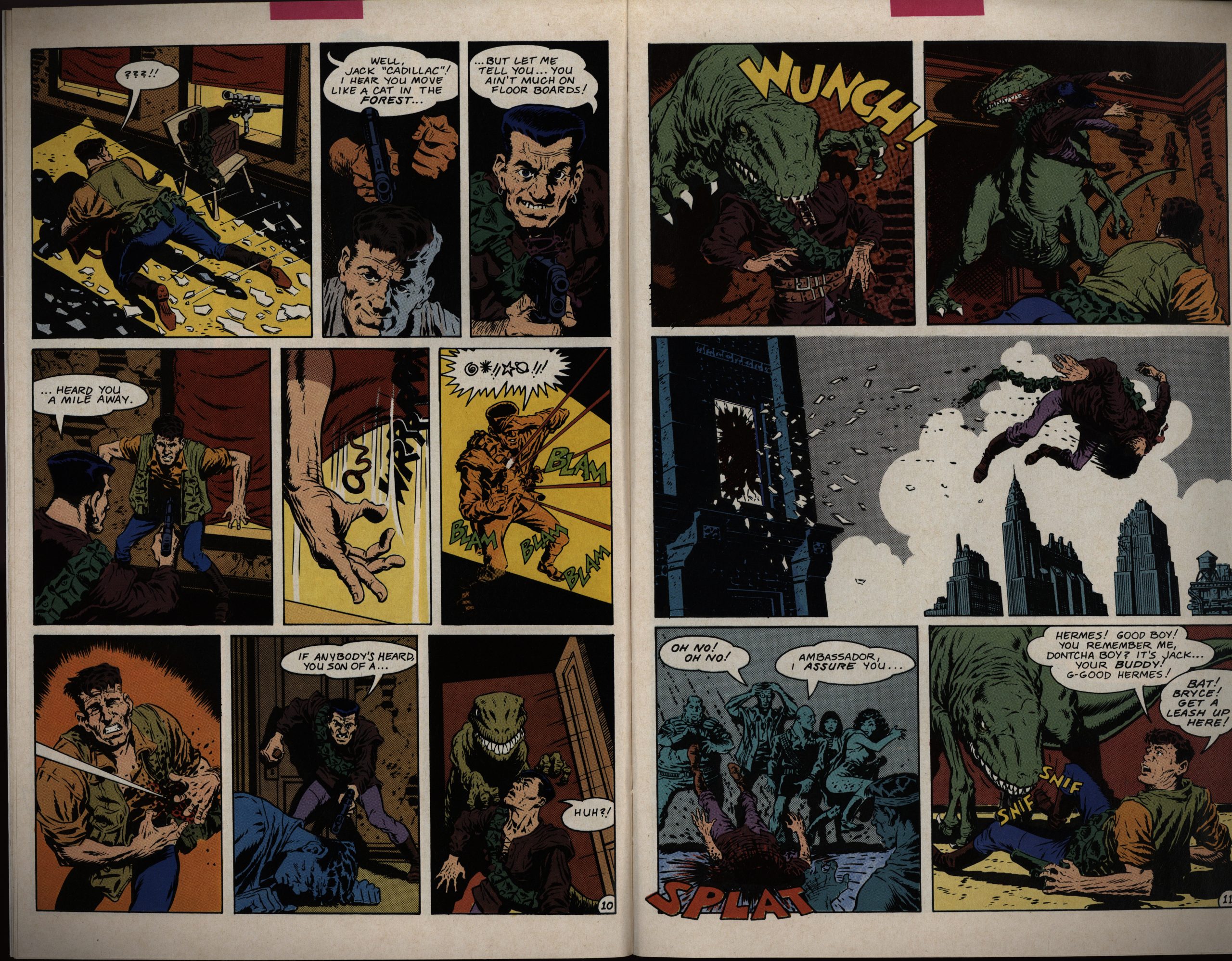 It’s about a post-apocalyptic future where, somehow, dinosaurs have returned, which means that you can have entertaining actions scenes like the above: Who can object to a surprise WUNCH! from a … velociraptor or something?

It sounds like a cheesy concept, and I guess it is, but Schultz imbues the concept with more mystery and interest than there is, perhaps. It’s told as short stories (each issue is two or three of them), but in (almost) every story we learn something new about the world they’re in. There’s a progressive deepening of the milieu… or at least it feels that way: Schultz may just be dropping things in at random without a plan. 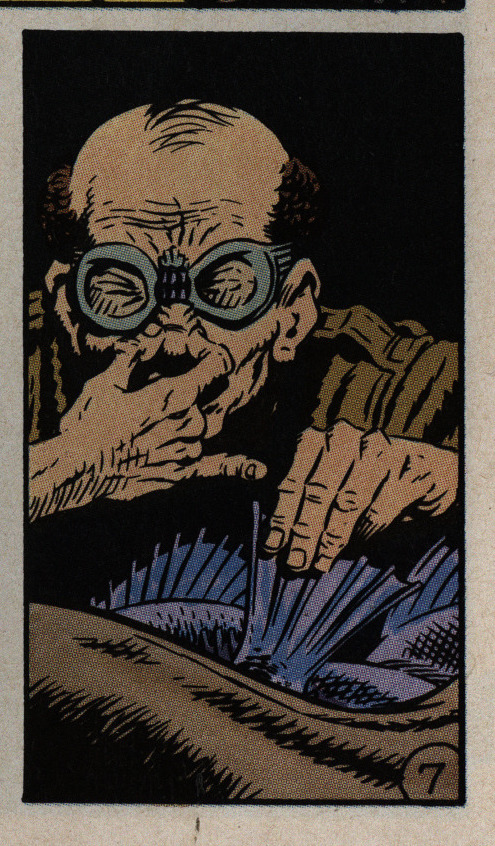 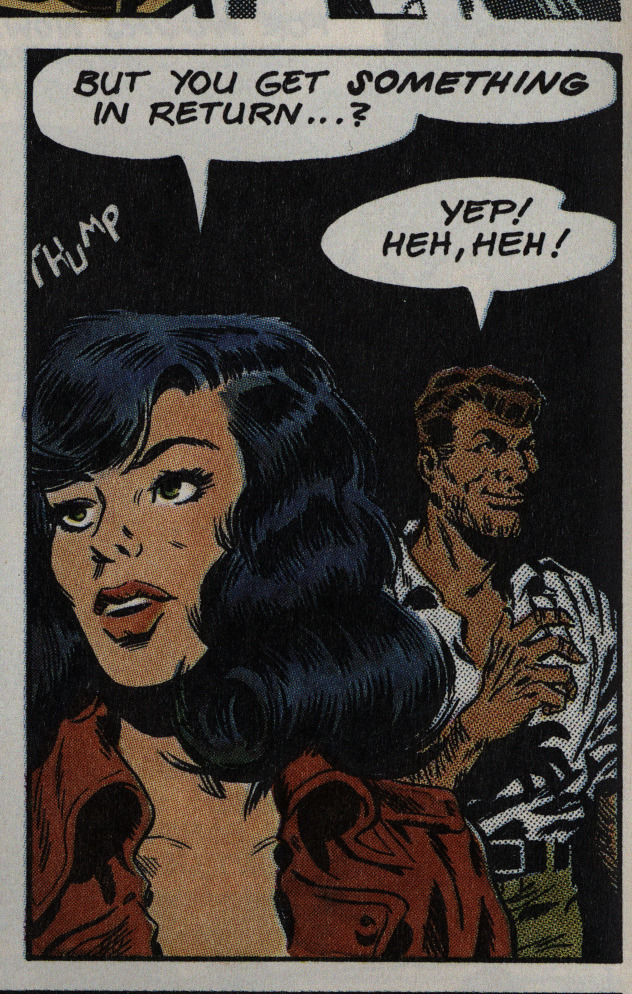 While Schultz’s artwork is something to behold, it does go slightly off the rails sometimes. Like her face above there… There’s something… off? 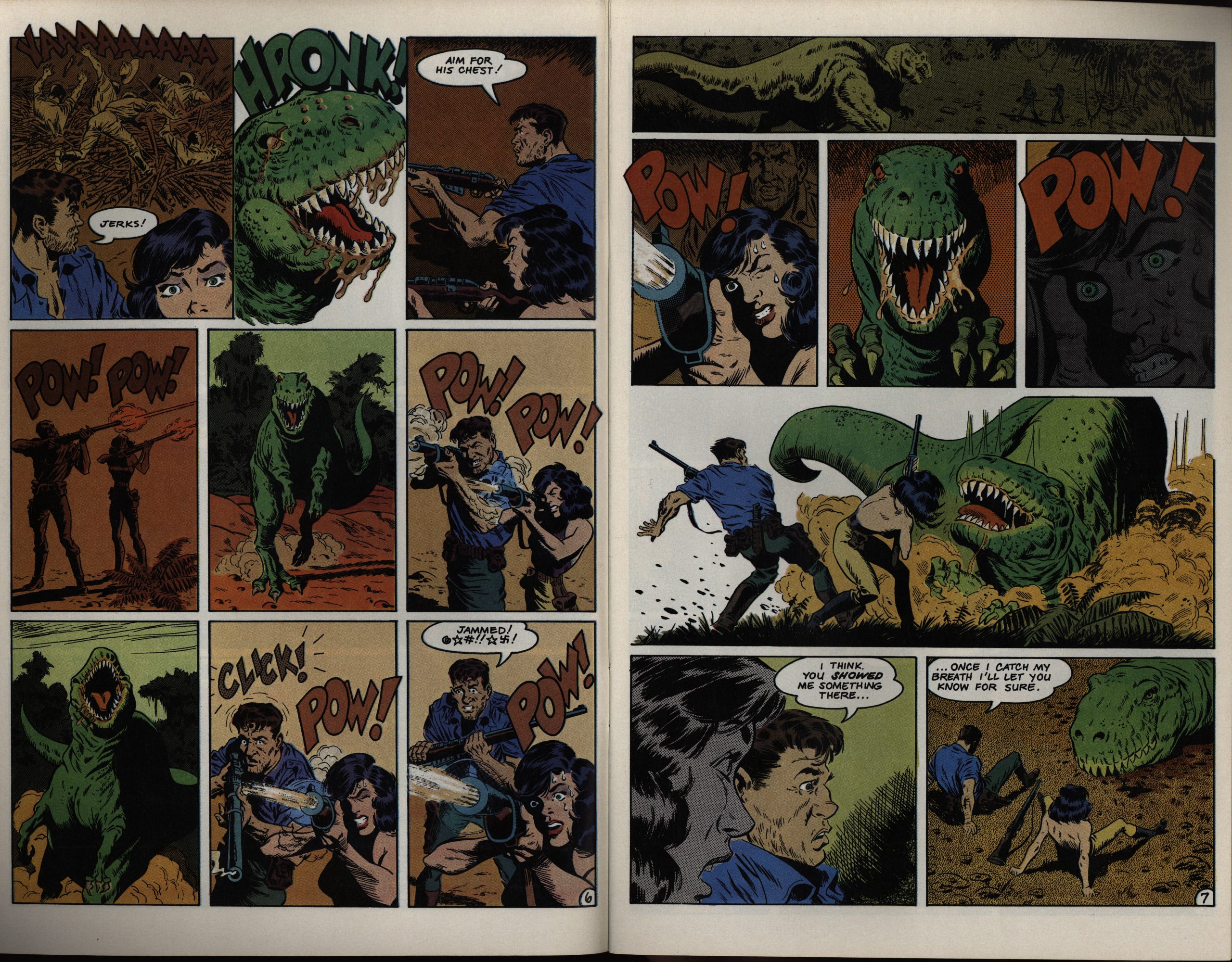 While Schultz leans heavily on 50s comics for the aesthetic, he thoroughly modern in most other aspects. No damsels in distress in sight here. 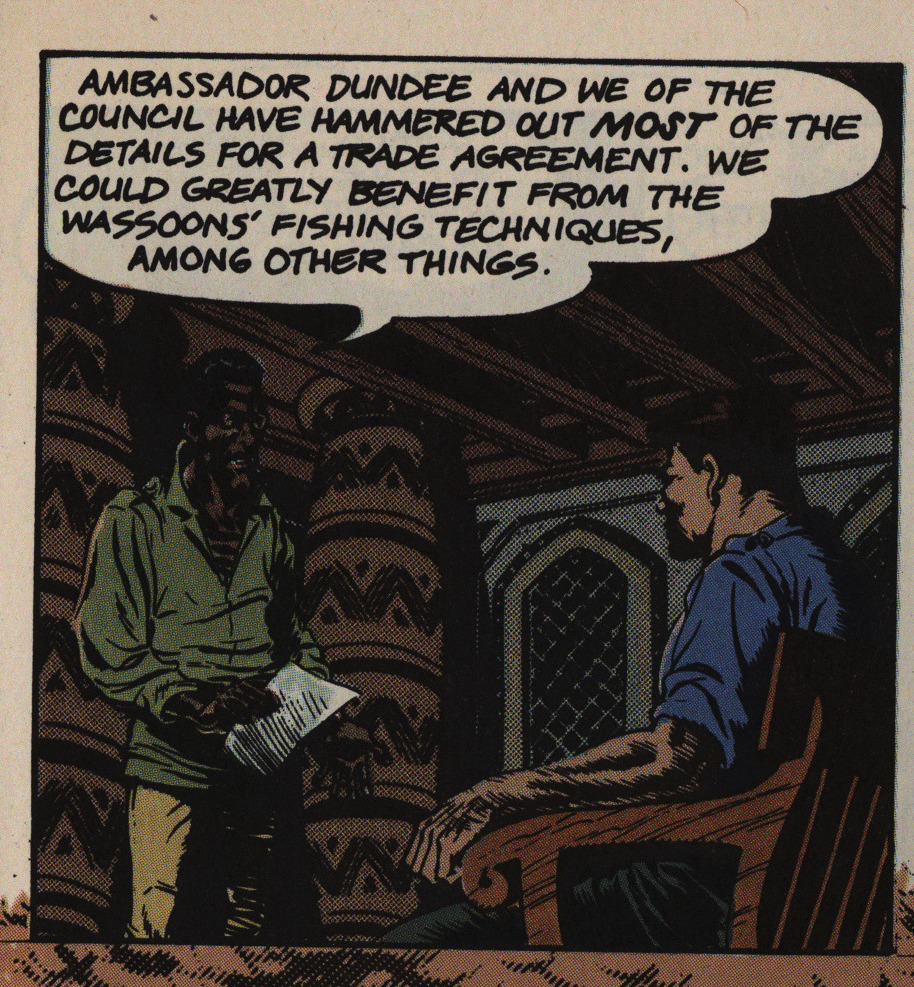 With the third issue, the quality of the paper stock takes a nose dive. Instead of shiny, covered paper, we get matte paper that doesn’t hold ink or colour as well, which leads to… these unfortunate results. 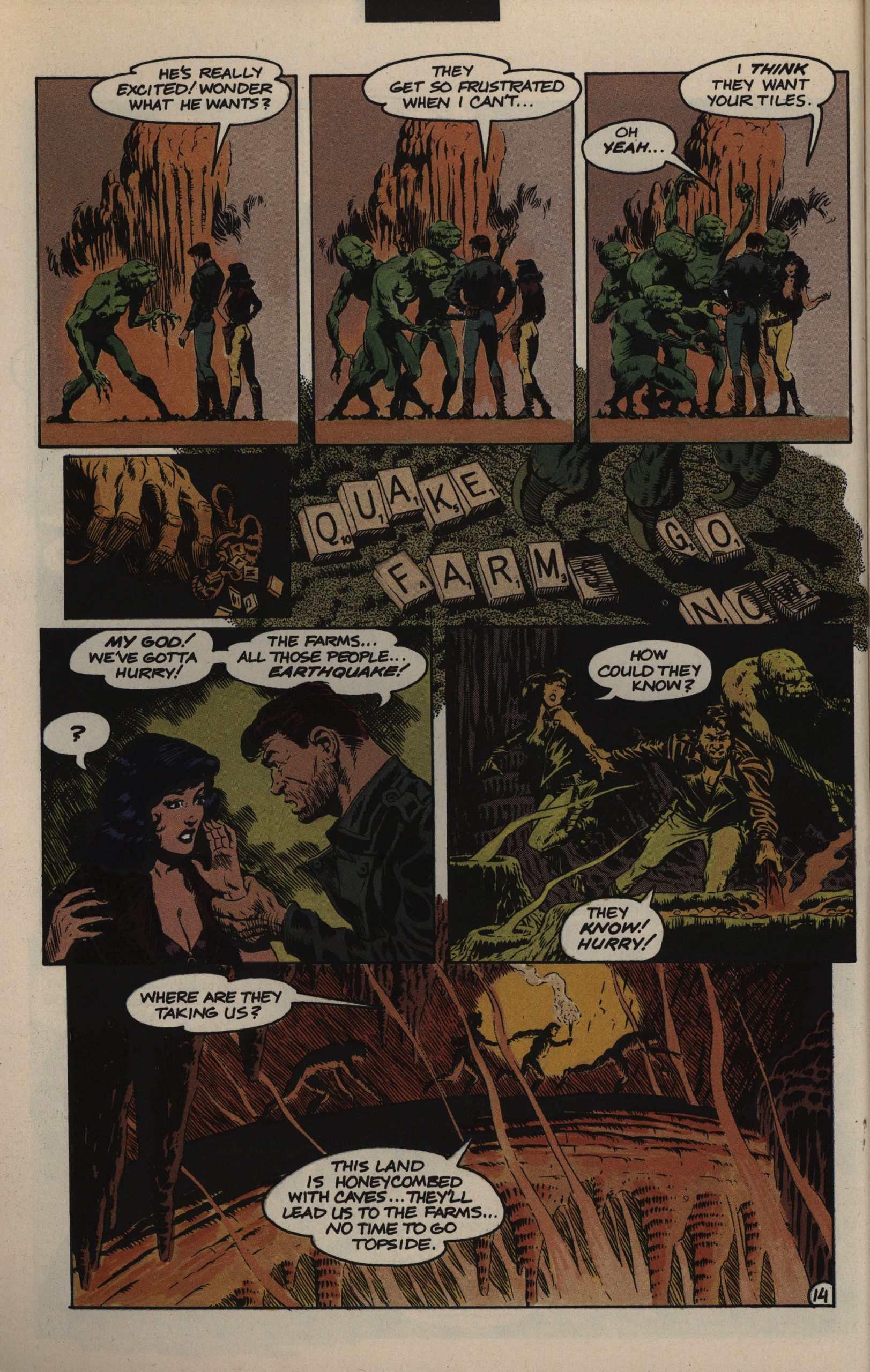 I read the series from Kitchen Sink back in the 80s, and I remember being quite enthused by it as a teenager. Reading this edition now, I’m even more into it, for some reason. Even if I know that the story will come to, well, nothing (it stopped publication in the middle of a storyline if I remember correctly), I’m really drawn into the world here. I feel the need to know more, which is the best feeling with sci-fi. 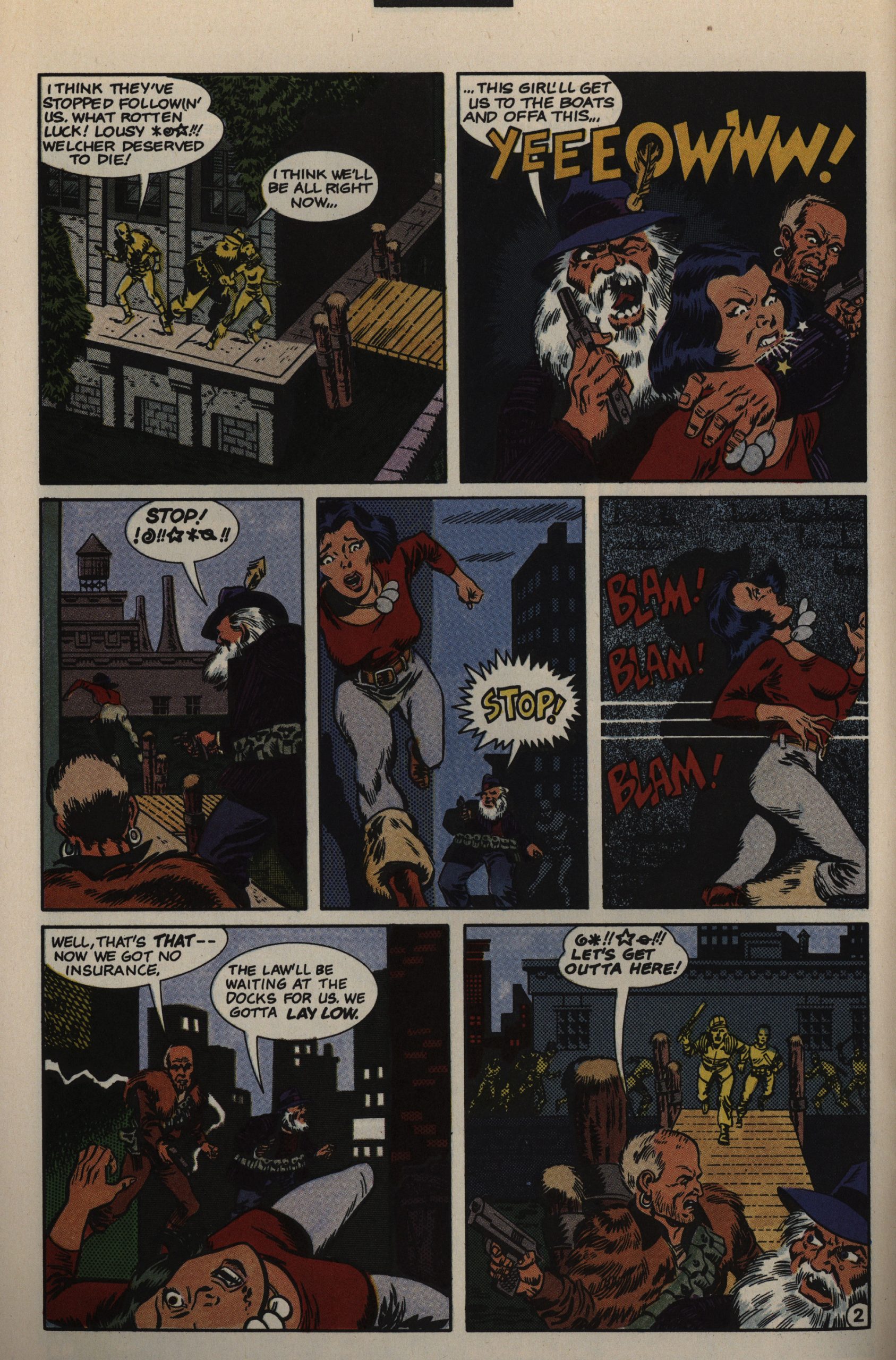 Most of the issues have a backup story drawn by Steve Niles, who draws more like Will Eisner than Wally Wood, I guess? Or a mixture. They’re fine, but…

… they’re (almost all) just O’Henry twist stories and do not further the main storyline at all. It feels like Schultz put a lot more thought and work into the stories he illustrated himself. 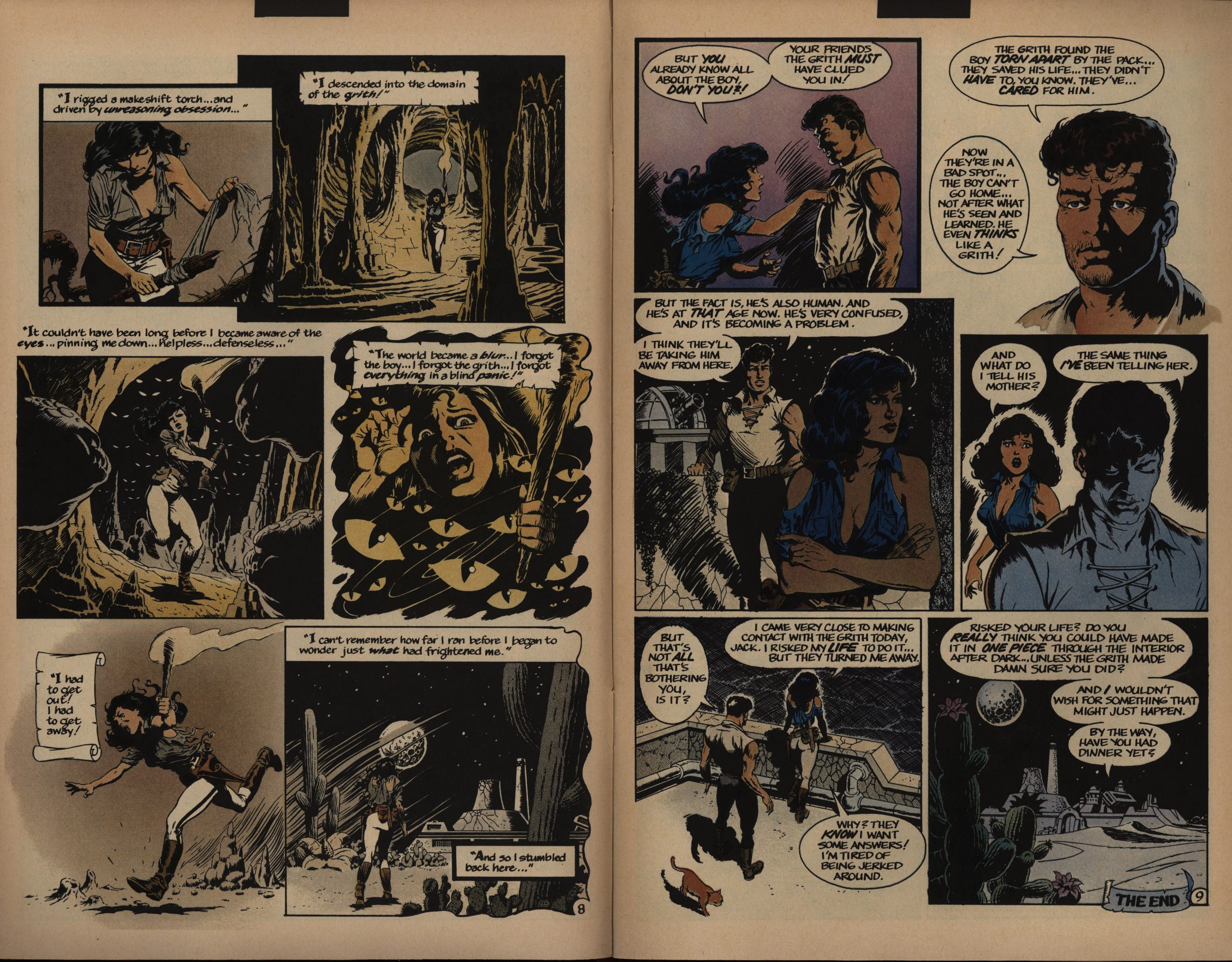 Well, that’s a way to colour, I guess…

Anyway, I can’t imagine what somebody who picked up this six issue series at a newsstand thought of it all. “That’s it? Isn’t there more?” Because there’s not even a whiff at an attempt at doing some sort of conclusion or ending or anything in the final Epic issue.

Xenozoic Tales has been reprinted many times; most recently in a 350 page edition (so a bit more than twice as long as the Epic edition). I haven’t followed Schultz career after he abandoned Xenozoic Tales, but from looking at his Wikipedia page, it looks like he’s concentrated on writing work-for-hire stuff (particularly on licensed stuff).

Perhaps he just didn’t want to commit to creating something that would have people go “so when are you going to continue the story of…” whenever he meets people? Because I can imagine that’s how half his conversations are like. “So when is issue 15 of Xenozoic Tales coming out, then?” It’d be enough to make anybody hate even thinking about starting it up again.

Schultz is a skilled artist, well-
deserving of the praise that he has
received for his work on this series.
His style is reminiscent of the atmos-
phere of the 1950s EC comics, as is
his practice of using short story
lengths (a 12-pager and two nine-
pagers are featured in this issue).
However, he has proved adept at
developing themes and storylines that
connect the stories together into an
overall framework, though not always
in obvious ways. This strange future
world holds many mysteries and
Schultz reveals them at a leisurely
pace, involving the reader in a process
of discovery.
This Epic edition will no doubt help
to gain wider distribution for the
series, which is something to be
applauded. (However, it is sad that the
comics market as it is structured today
does not seem capable of offering as
much support to fine work such as this
when it originally appears from an
independent publisher.) I am not
overly enthusiastic about the format,
though. Xenozoic Tales appears in
black-and-white format while Cadil-
lacs and Dinosaurs is in full-color and
on slick paper. Not only do I think that
C&D’s format is not worth the higher
price tag, I think it detracts from the
overall impact. Maybe I am just too
accustomed to Xenozoic Tales’s
original appearance, but, to me,
Schultz’s artwork is only muddied by
the coloring process, losing much of
its sharpness and shading (both liter-
ally and figuratively).

One thought on “1990: Cadillacs and Dinosaurs”