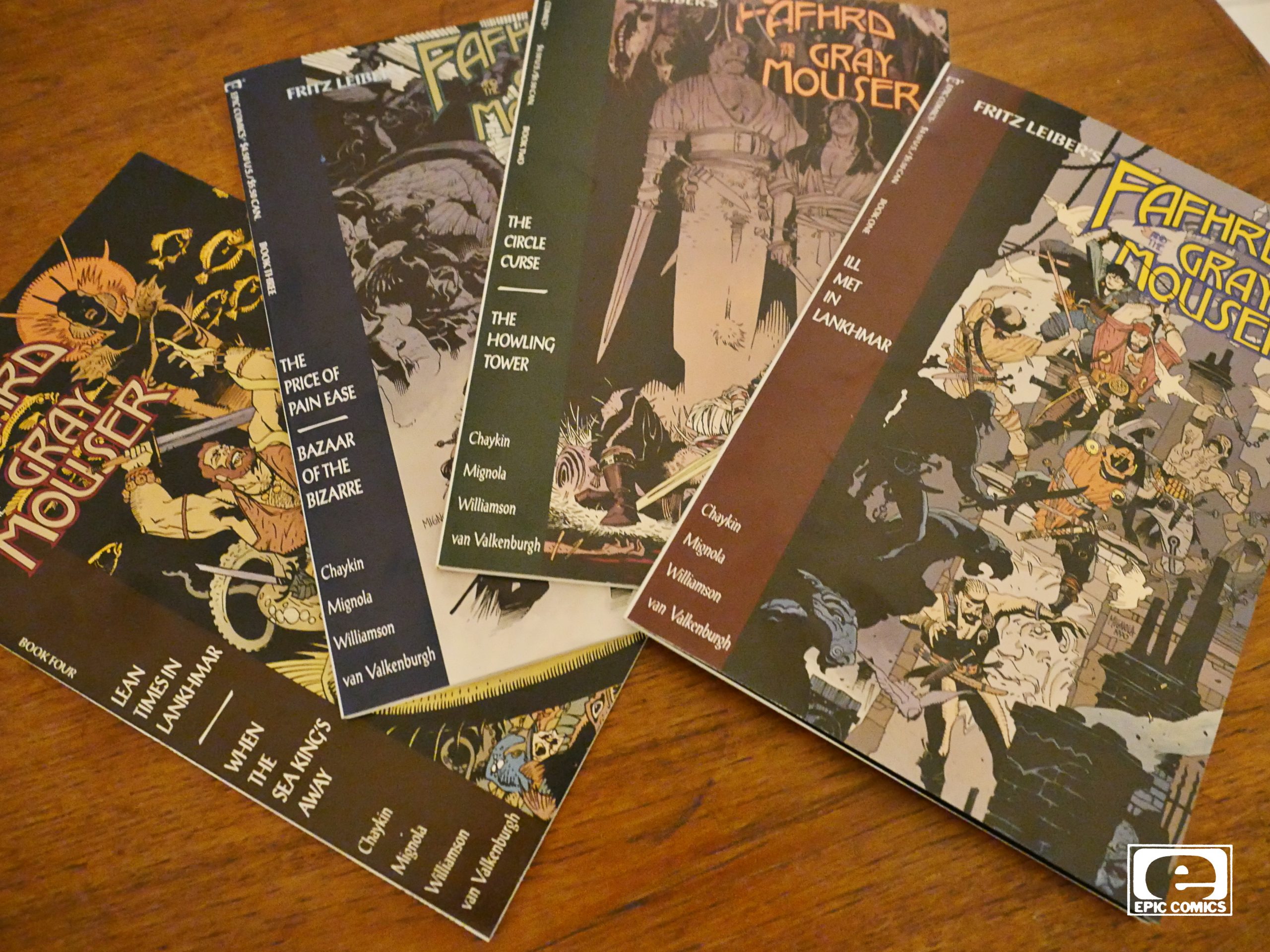 That’s some list of creators. I like all of them, but this is an adaptation, and they usually go awry, anyway. On the other hand, this isn’t a Byron Preiss production (he’s usually involved somehow when somebody adapts something to comics in the 80s, and particularly when Chaykin does some work). 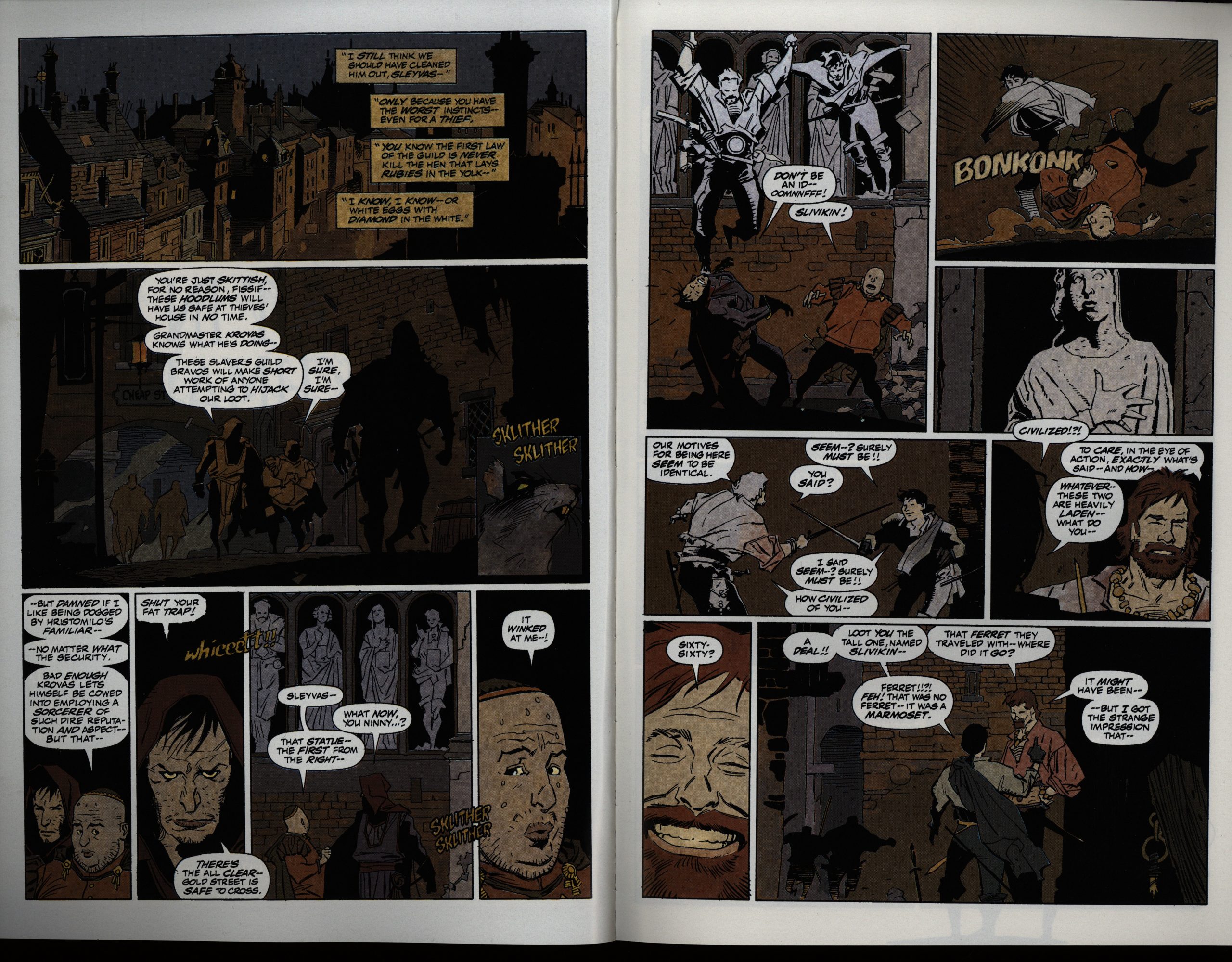 Wow! It’s good! No, it’s more than good: It’s funny! And it drops us right into the story without a lot of tiresome exposition, and without an origin story of every character involved. Instead we have a great meet cute between Fafhrd and the Gray Mouser in the middle of a hold-up. And we get hints at dark things happening with the other guys, and a feeling for the city, and…

It’s dense, but it’s playful and light and really readable. 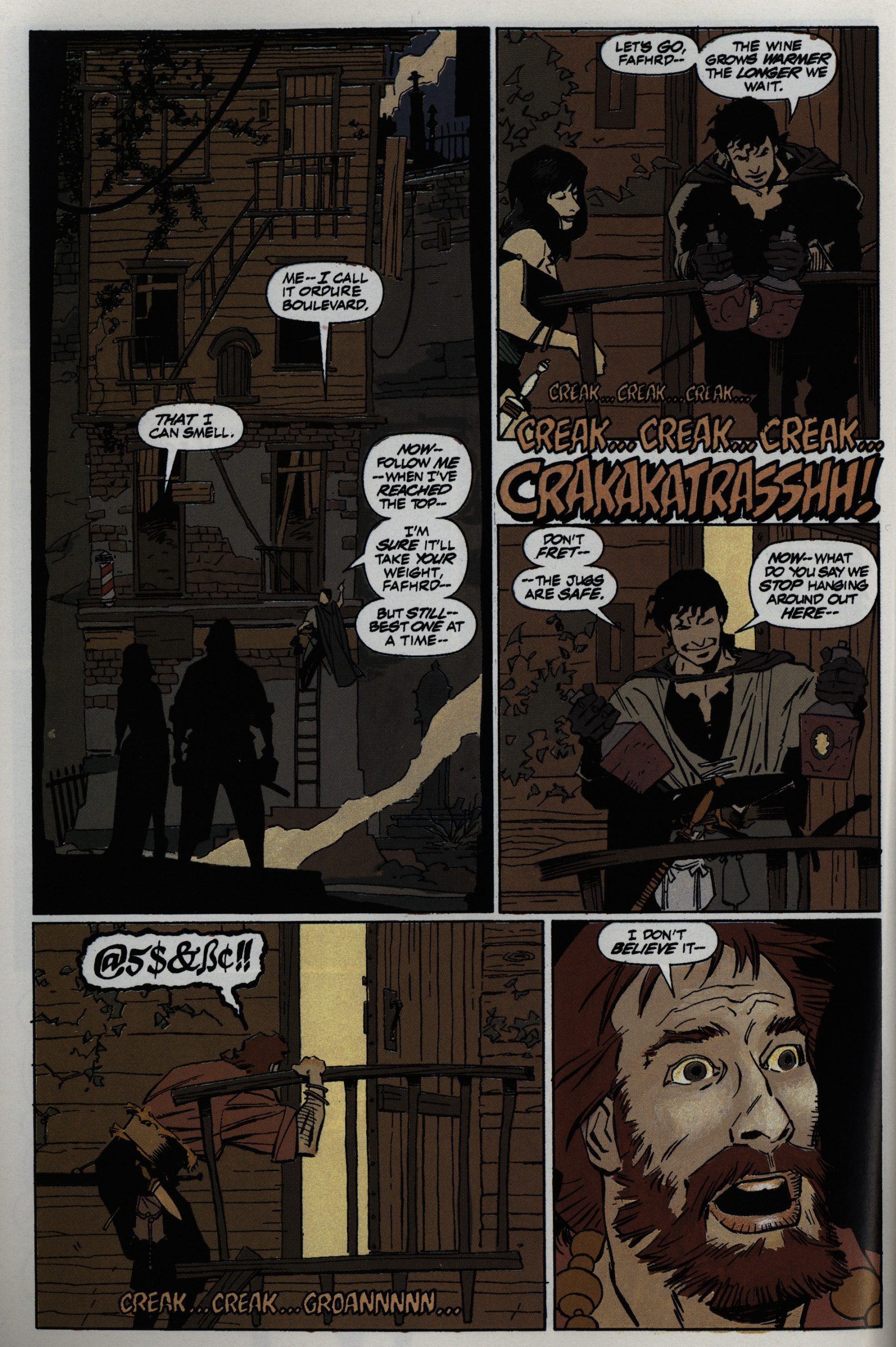 I mean, it’s just so seemingly effortless. The CRAKAKATRASSHH where we can fill in ourselves what’s going on, while the repartee keeps pattering on.

I don’t see a lot of Williamson here in the inking, but then Mignola’s pencils usually overpower anybody working with him. But his style is so well-suited to this sort of picaresque pseudo-medieval stuff… I mean, look at that ramshackle house. 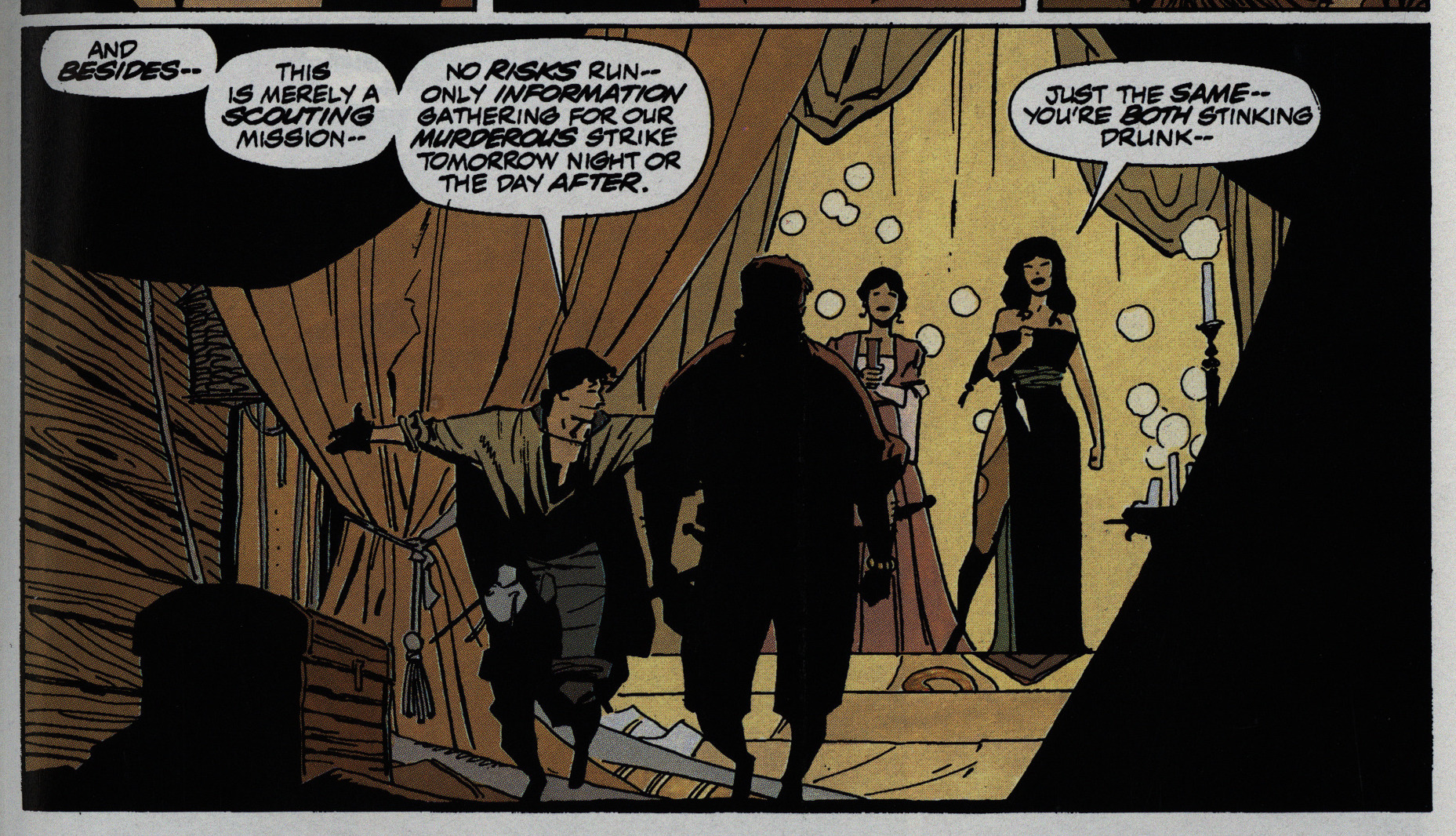 I had forgotten how small Mignola draws feet. It’s amazing how much it just looks like a part of Mignola’s style and not like… deformities. 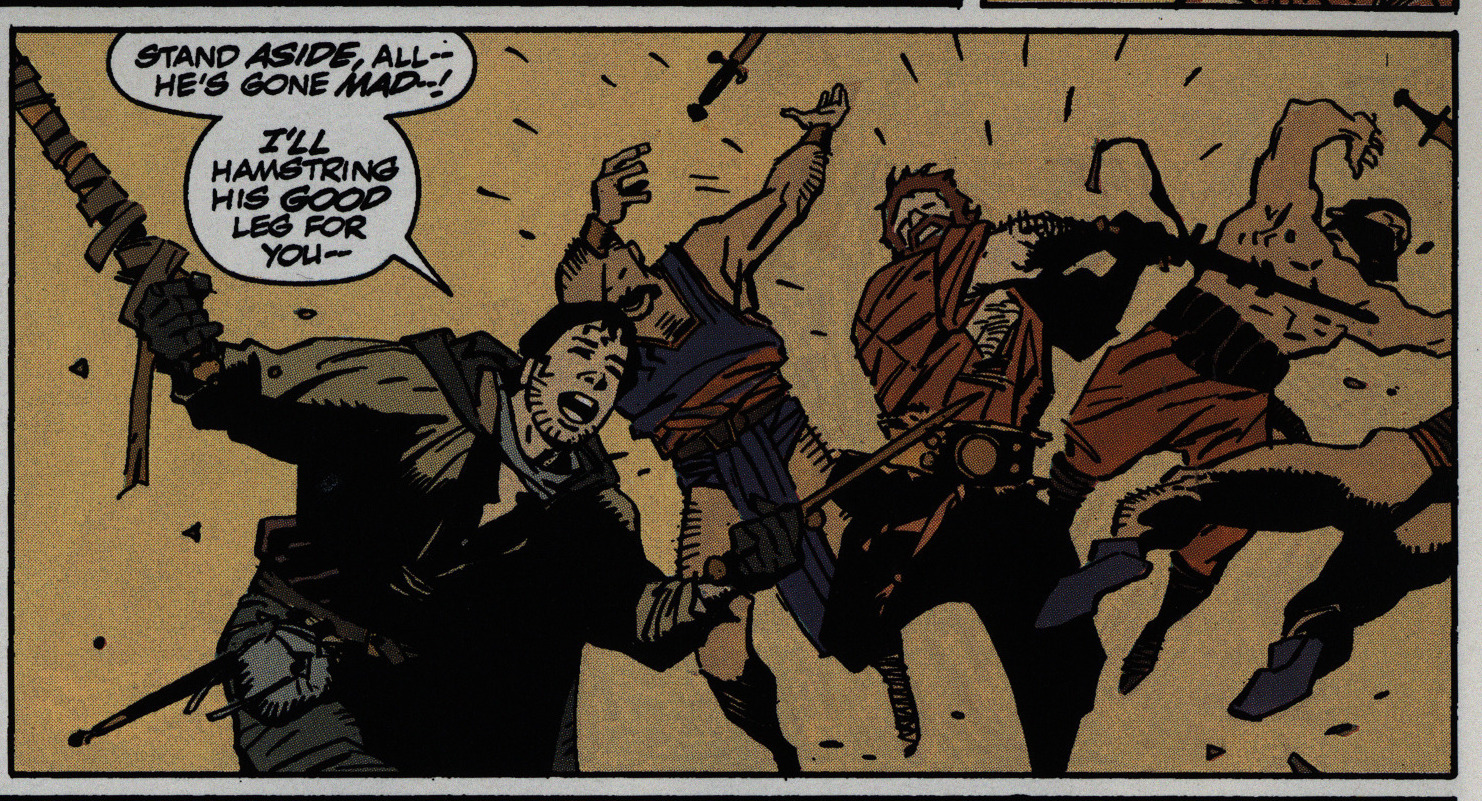 It’s a perfect little romp of intrigue and danger and excitement and romance. I mean, look at that fight scene. Just look at it! 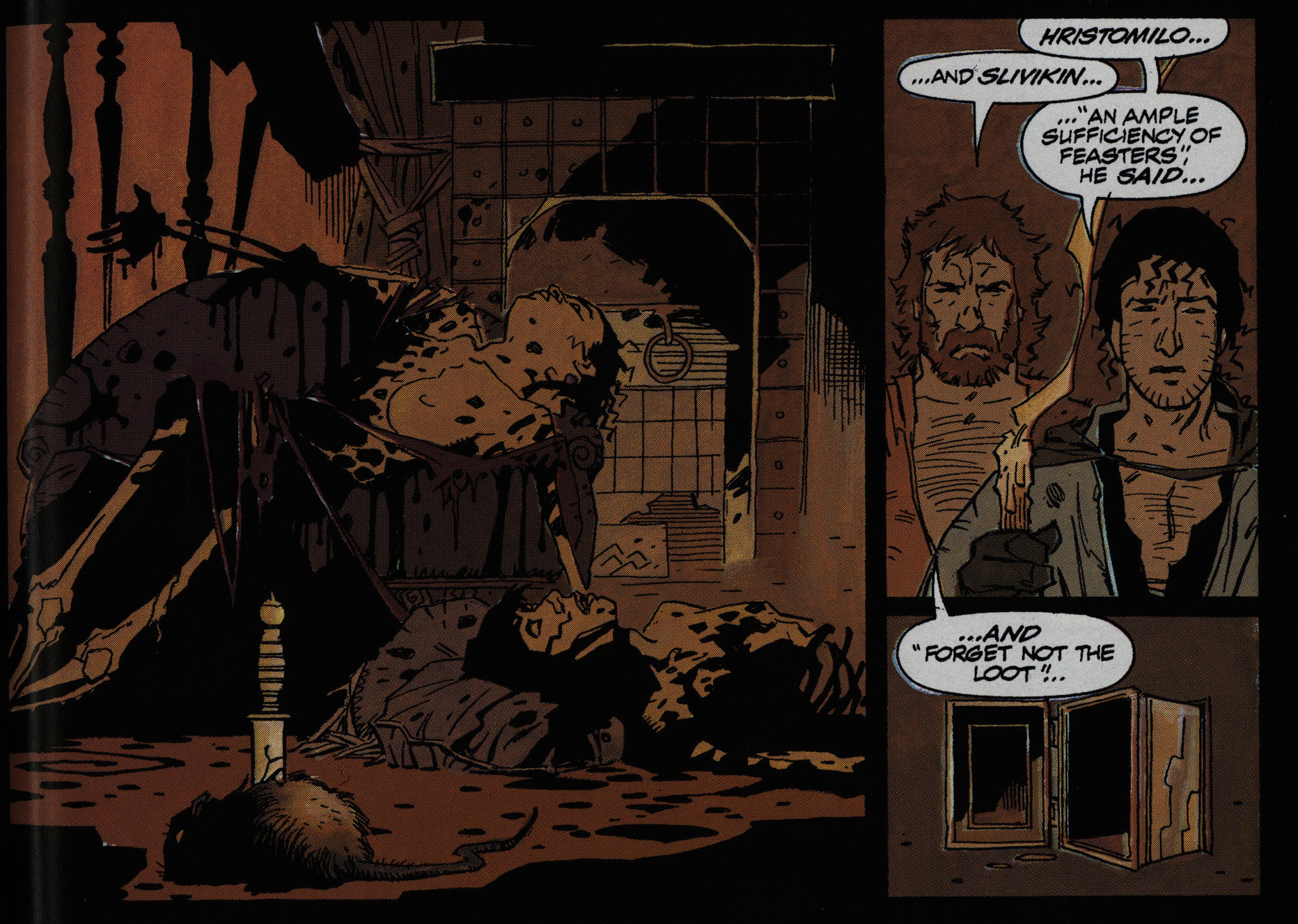 They then go out and finally exact revenge on the culprits, but… It’s pretty gratuitous, and makes sense only in a meta-story way: If we’re to have story after story with swashbuckling happy-go-lucky guys, they surely can’t have girlfriends? Right? So they have to be killed off. Besides, it gives them a reason to kill the bad wizard, right? 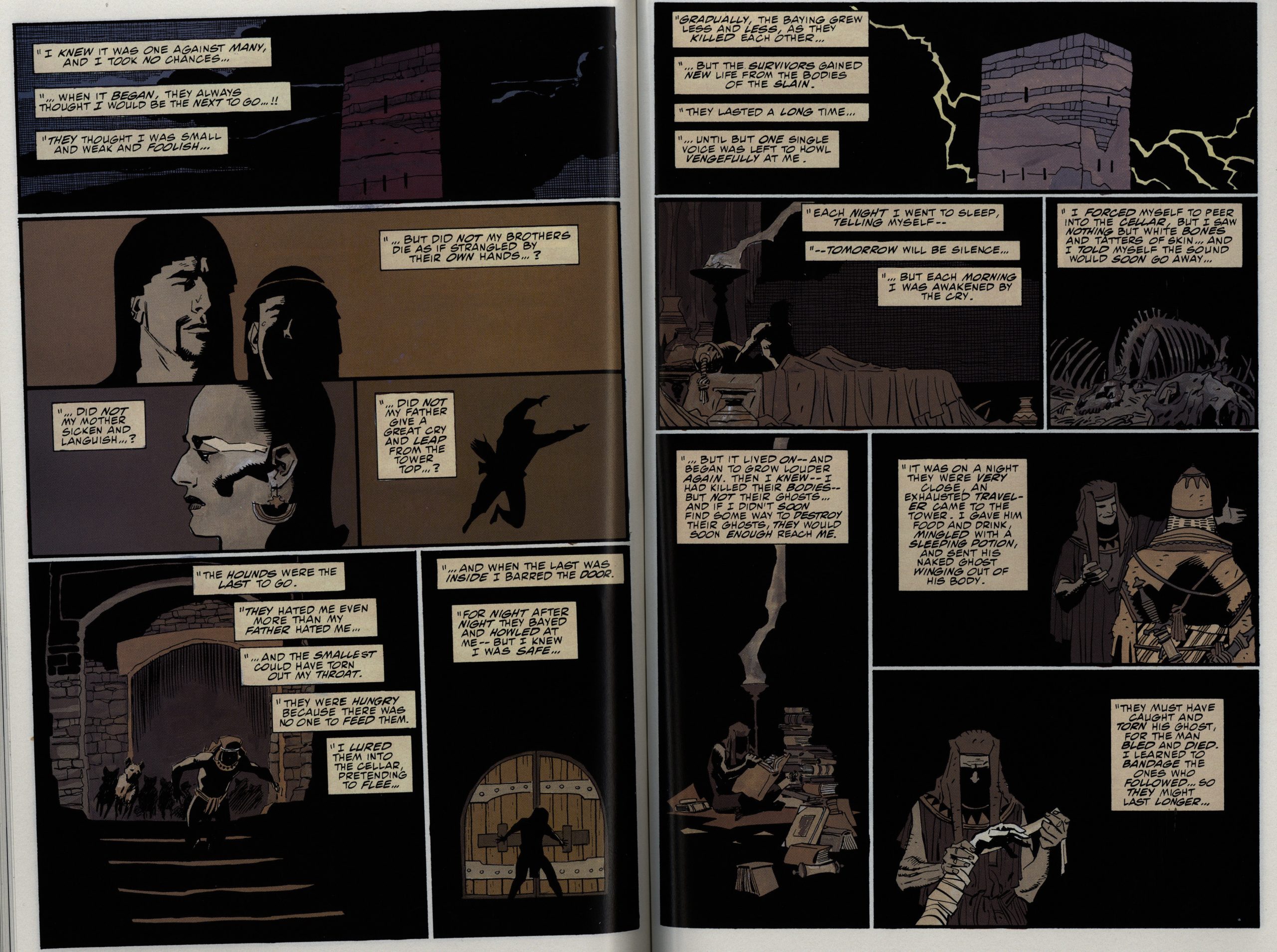 But that’s only the first issue of this four-parter, and it feels like I’ve read an entire novel already, because there was so much in there. The remaining three issues carry on in much the same manner, but with shorter stories with more compact casts, for the most part. 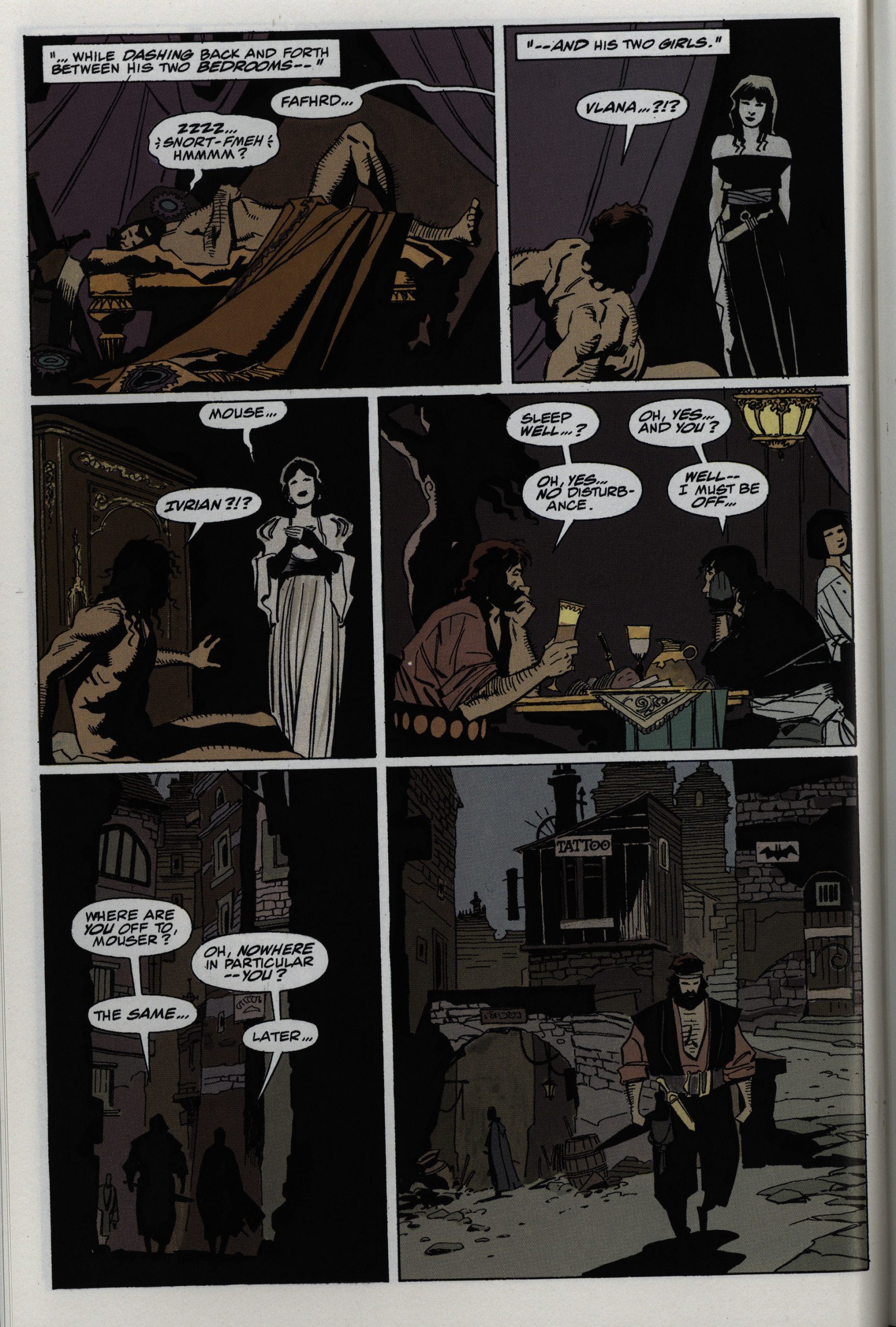 I could basically put any page from the series in here, and you’ll find some storytelling detail to squee over. Like here, with the effortless parallel progress of the two main characters’ experiences. I mean, it’s not an unique way to do something like this, but it’s just so… assured. It reads so perfectly well, and everything is so clear, even if what’s happening isn’t completely straightforward. Basically most anybody else would have dropped some kind of explication in there to assure themselves that the reader gets it, but the creators here have complete trust in both themselves and the reader. 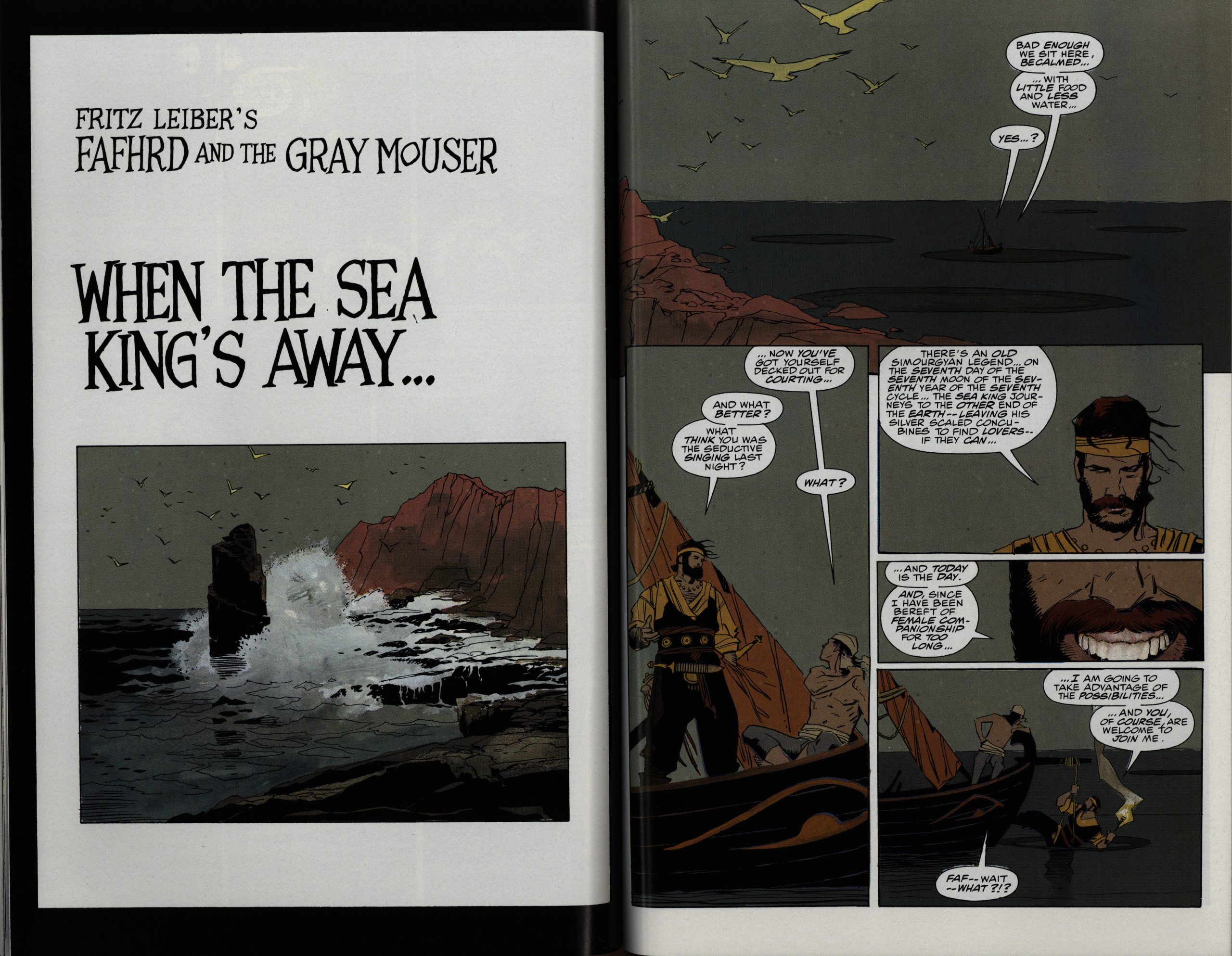 I even like the title pages. And the colouring’s perfect.

The series was collected in one paperback by Dark Horse in 2007.

[…]
The climax is suitably dramatic.
The story condensation is good.
Howard Chaykin has kept as much of
Leiber’s witty and semi-archaic dia-
logue as possible. He has also written
new dialogue to compress several
pages of narrative description into a
few succinct speech balloonsamd it
is indistinguishable from Leiber’s own
writing. There are a few spots where
the condensation is’ confusing. The
poisonous smog cloud is shown as a
“What was that?” object of mystery,
but its deadly nature is unclear. The
scene from the original story in which
Fafhrd takes Vlana•s silver dagger
(proof against magic) for their con-
frontation with Hristomilo is not
shown, so when Fafhrd pulls it from
his belt as he is losing his final battle
against the wizard, it seems like a
hasty and sloppy deus ex machina
addition.
But, all in all, Fajhrd and the Gray
Mouser is still better than most comic
books of sword-and-sorcery adven-
turee
GRADE: ! ! ! !

Well, that was… a review.

Mignola’s called this his favorite pre-Hellboy work, and it’s easy to see why. His artwork is fantastic, and the dirtied-up high fantasy setting is within his general wheelhouse but not quite like anything else he’s done before or since. I know people complain about Chaykin’s scripts being choppy or somewhat difficult-to-follow, but that did not bother me. It reminded me of the feeling I got from reading a random Fafhrd and the Gray Mouser short story collection when I was 14-years-old, thrown into the deep end of a strange fantasy world full of crime and magic.

While this isn’t Mignola’s earliest work (which was actually with Marvel in the early 1980’s on Daredevil and Power Man & Iron Fist), Fafhrd and the Gray Mouser does present a great deal of the style—the use of black space and shadow, unusual angles, stylized presentation and frequent use of symbolism—that would become trademarks of Hellboy three years later. This style is an ideal fit for Leiber’s work, echoing all the shadow and view askance that characterize Lankhmar.