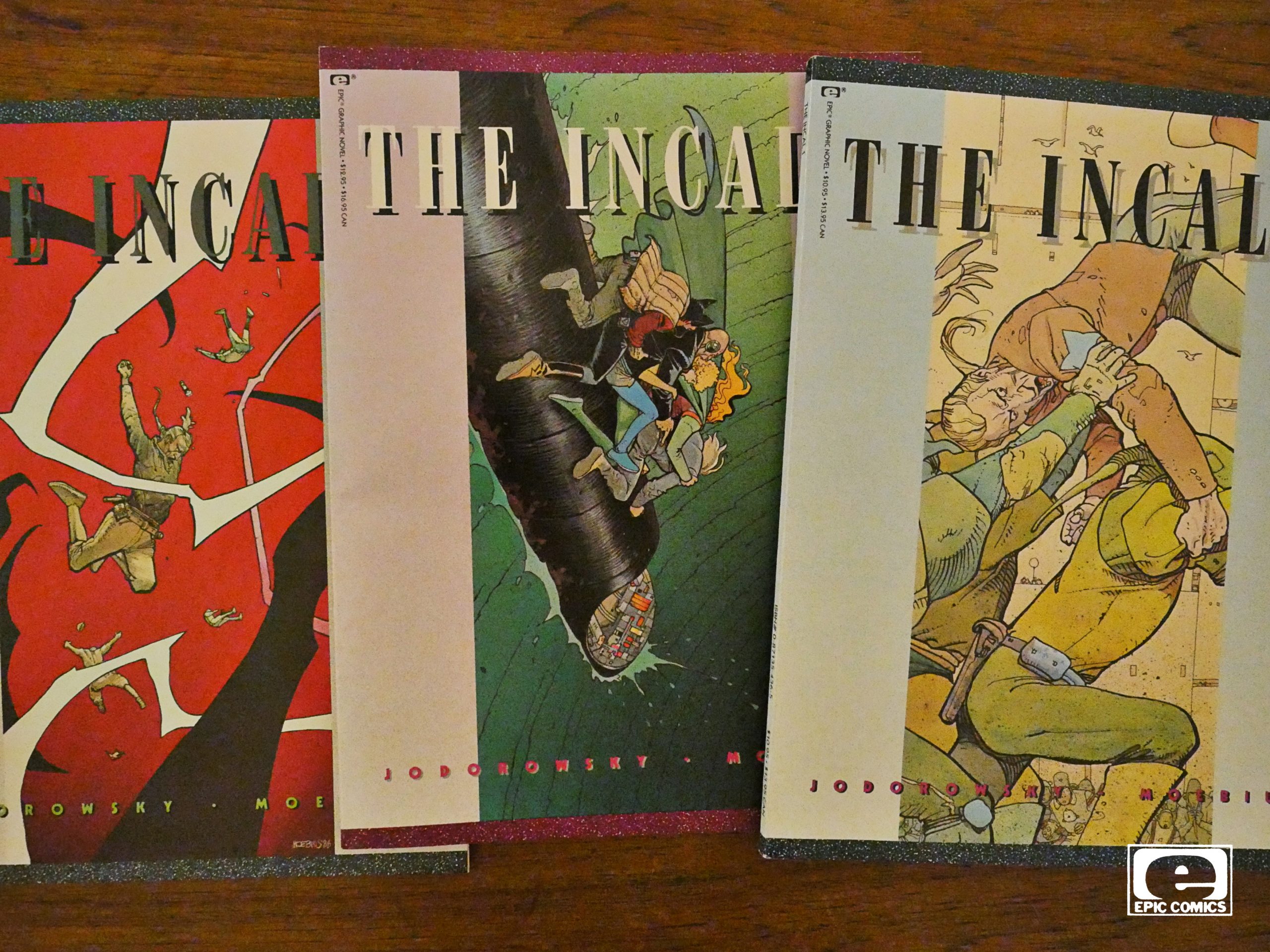 I originally bought this series when it came out in Danish translations, so I must have been about thirteen. And I totally loved it. I think the old covers were pretty fun, too: 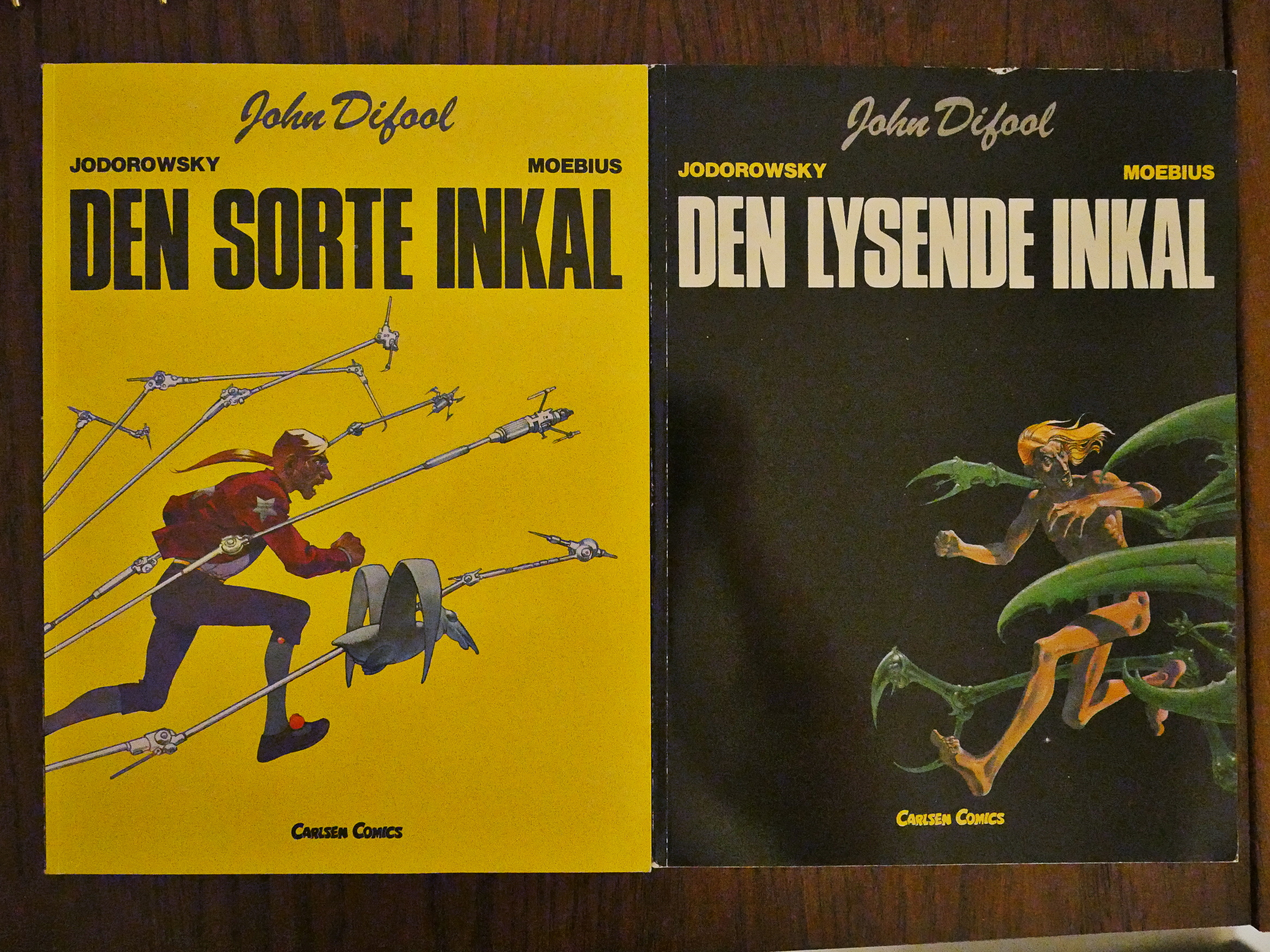 The first one, “The Dark Incal”, being bright yellow and the “The Bright Incal” being all black. And Difool running to the right and then the left. I was just fascinated by it all… most of all because this was Moebius’ most straightforward comic: You get the gorgeous artwork and a storyline that seems to be going somewhere. Which was unusual for Moebius at the time. 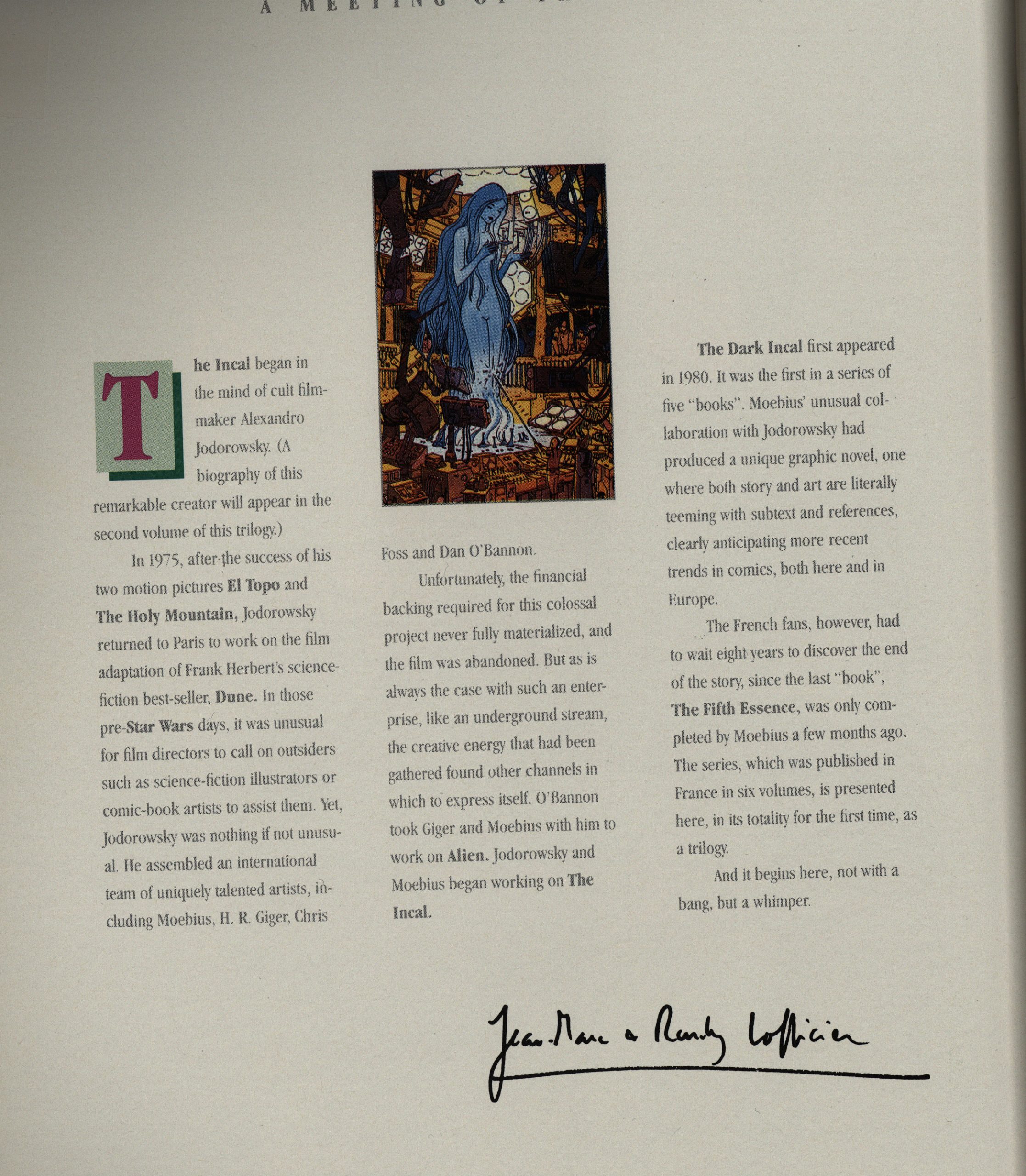 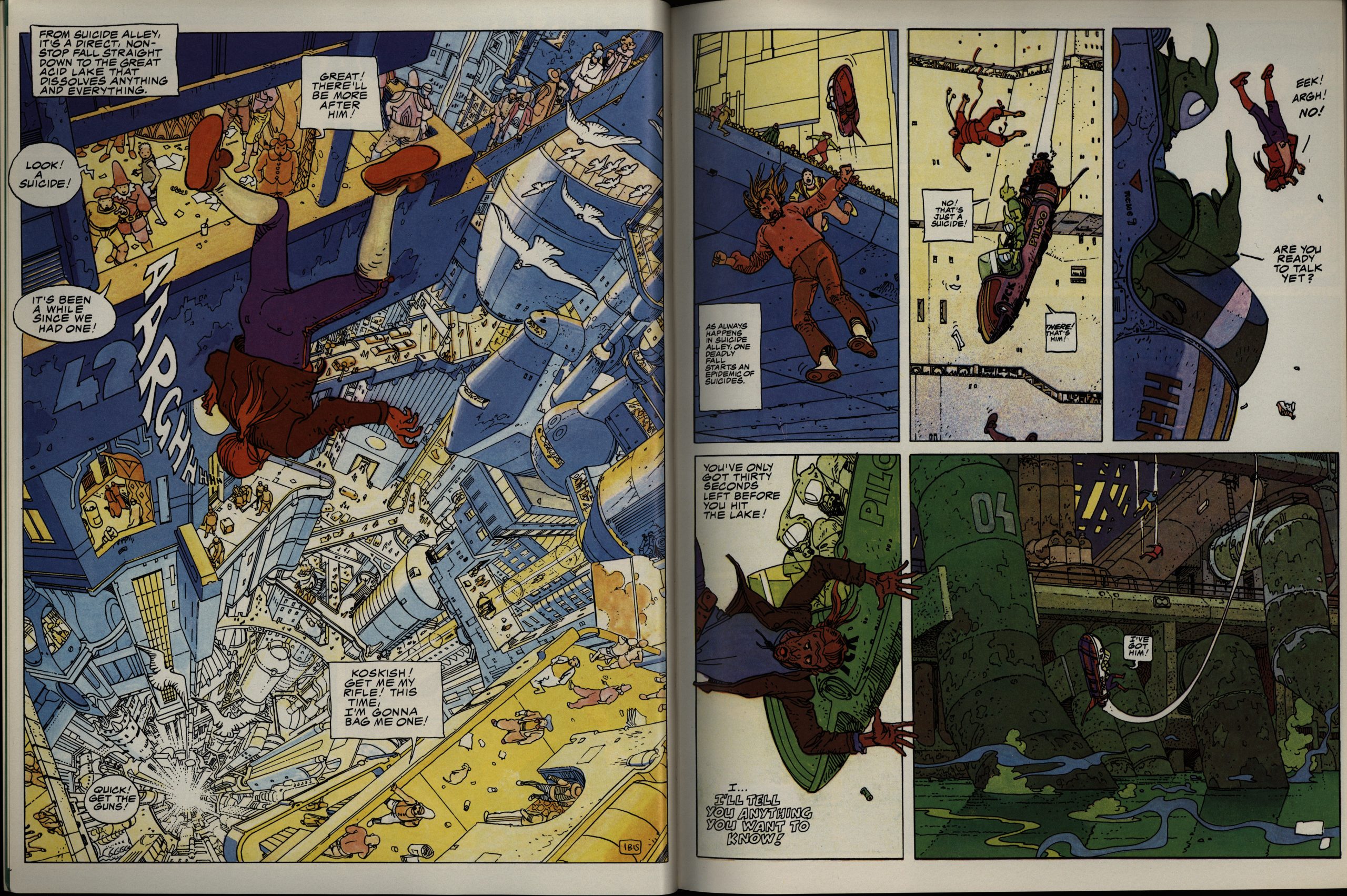 Oh, yeah. This is the stuff. This is how it opens, and from the first page you feel like there’s an entire world here. All these little details pointing to something large and complex. And, of course, there’s the action.

This Epic edition is pretty well printed, and it’s on shiny paper which makes the colouring pop. Let’s compare with the Danish 1981 edition: 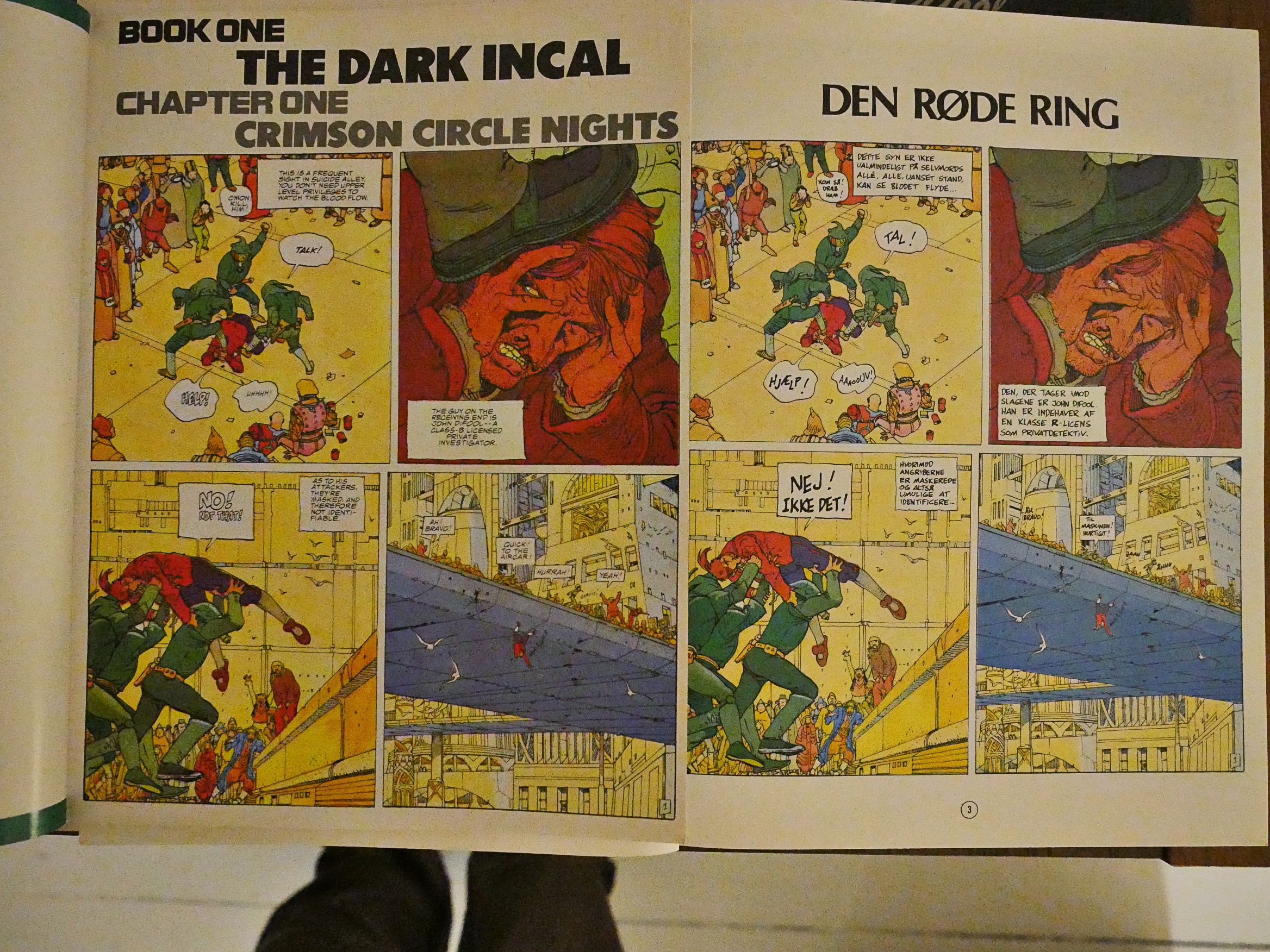 The colouring is by Yves Chaland, and Epic hasn’t touched it al all, I think? And, indeed, it looks even better in the Epic version, with deeper and more vibrant colours. (The 81 edition is on matte paper.) 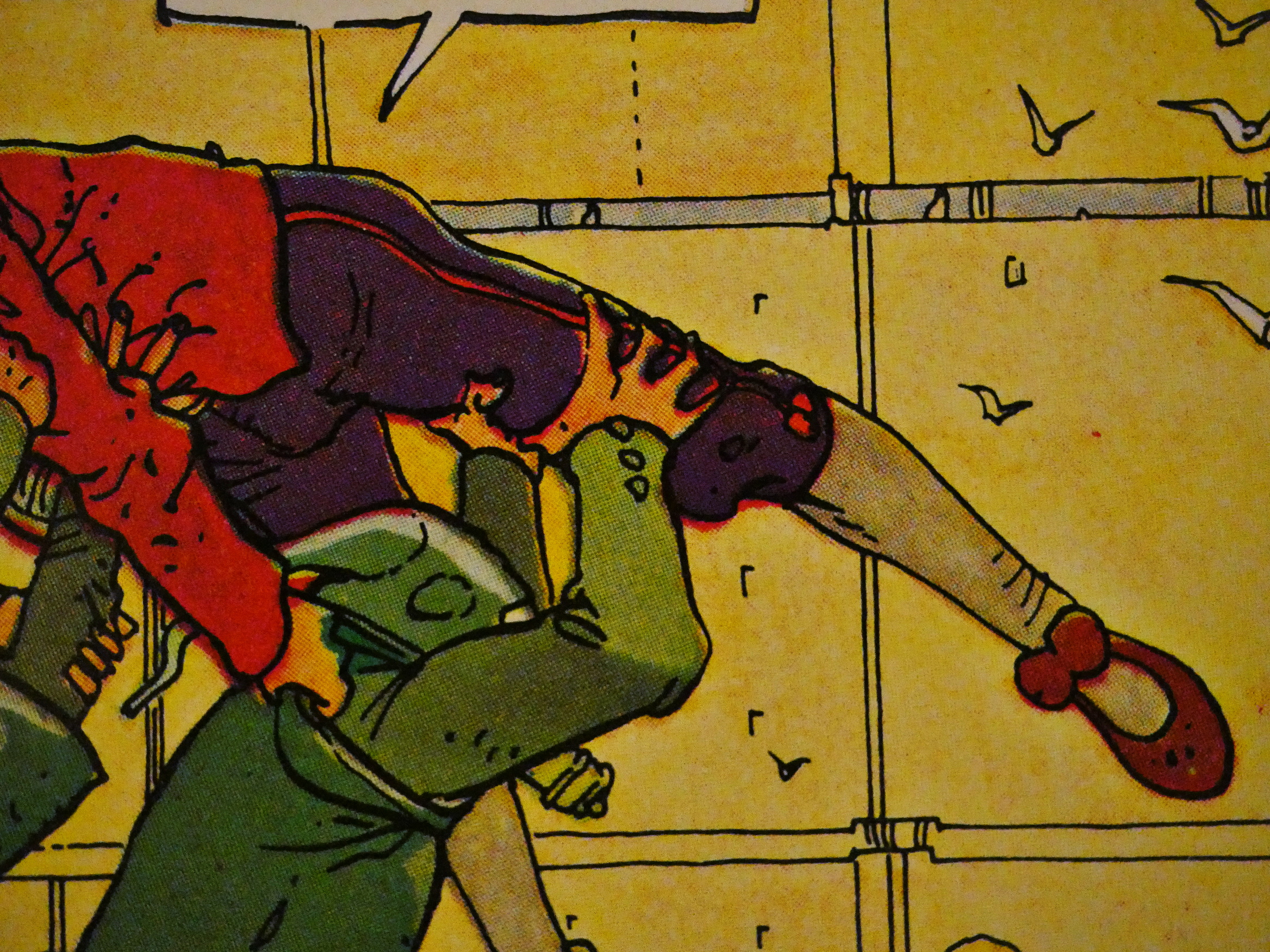 Some pages in the Epic edition are slightly off register, which makes it looks smudgy. Look at the somewhat cleaner look from 81: 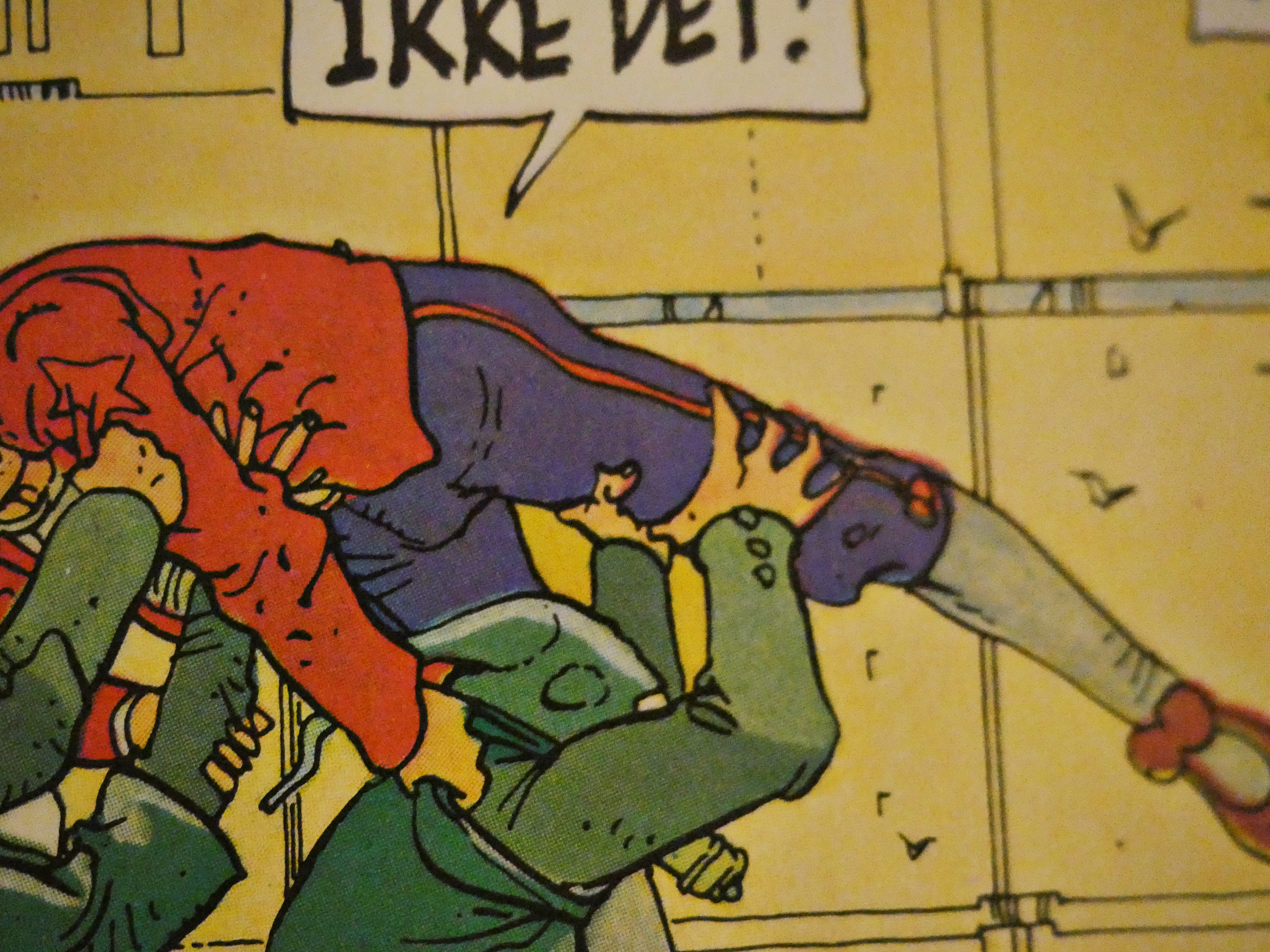 It’s also slightly off-register, but in the opposite direction…

Oh, how much work it was to get all this stuff right it the years before everything went digital. 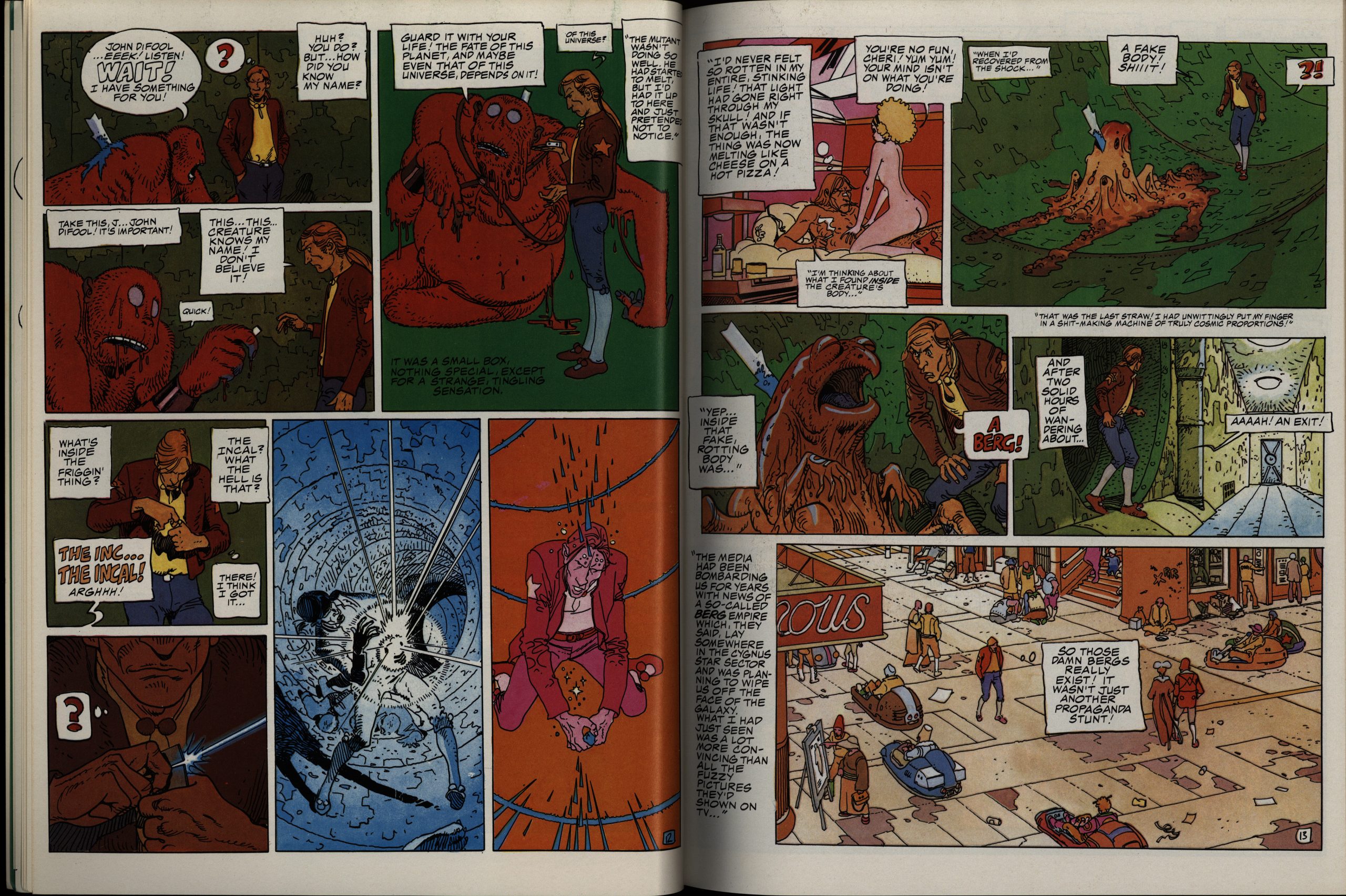 The Incal is pretty dense. There’s a whole bunch of characters and a whole lot going on, but the storyline is pretty straight forward. But since this is Jodorowsky, it’s… “spiritual”… So there’s some time-outs for that stuff, but it starts off as a hardish-boiledish crime thing. Which is an often used structural device if work from. 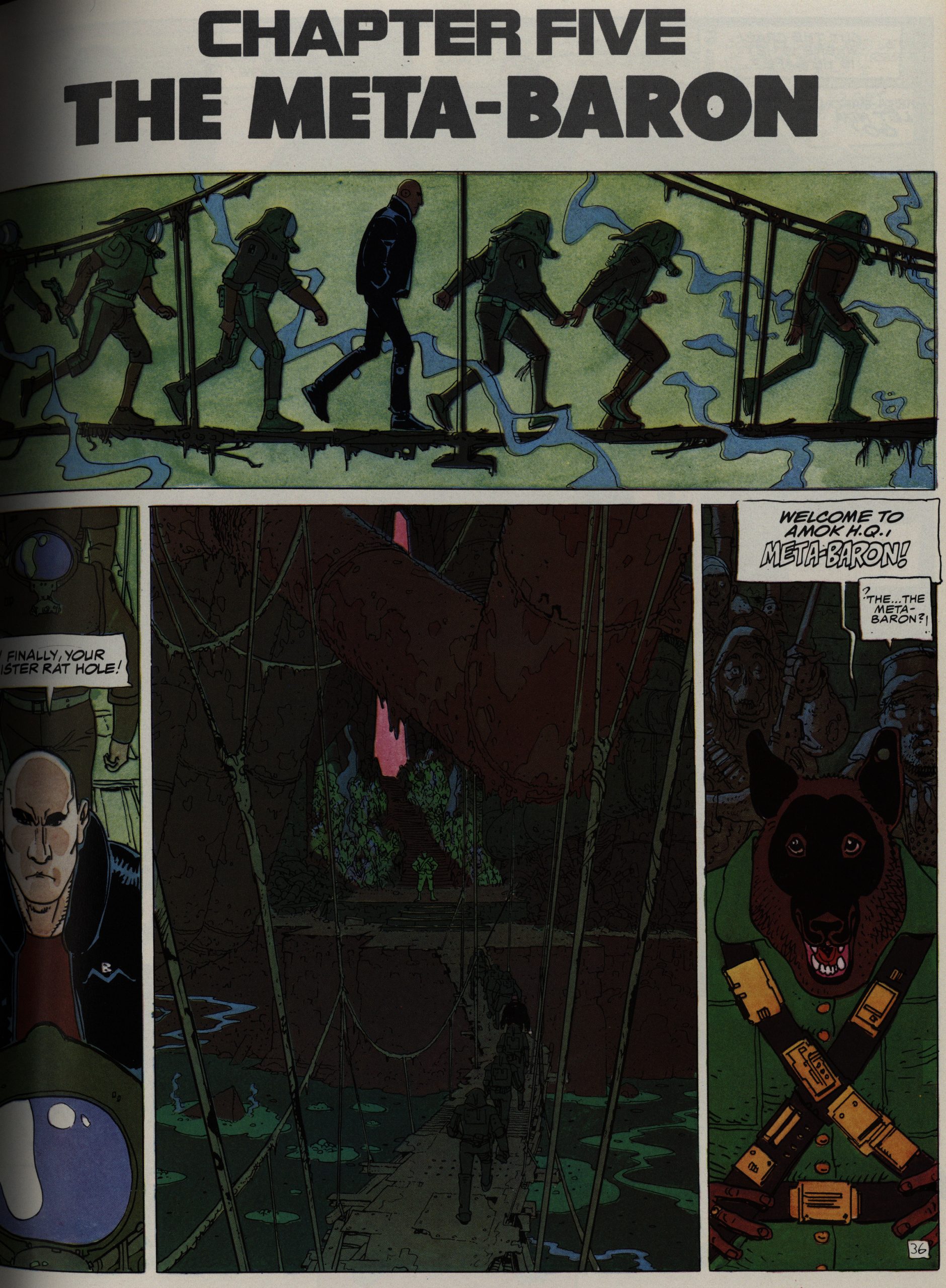 Oh, right, the Meta-Baron. Jodorowsky would go on to write a bewildering number of comics based on that character, drawn by a whole bunch of different people. I’ve tried reading some of them, but I find that my patience with Jodorowsky (when not drawn by Moebius) is pretty limited. 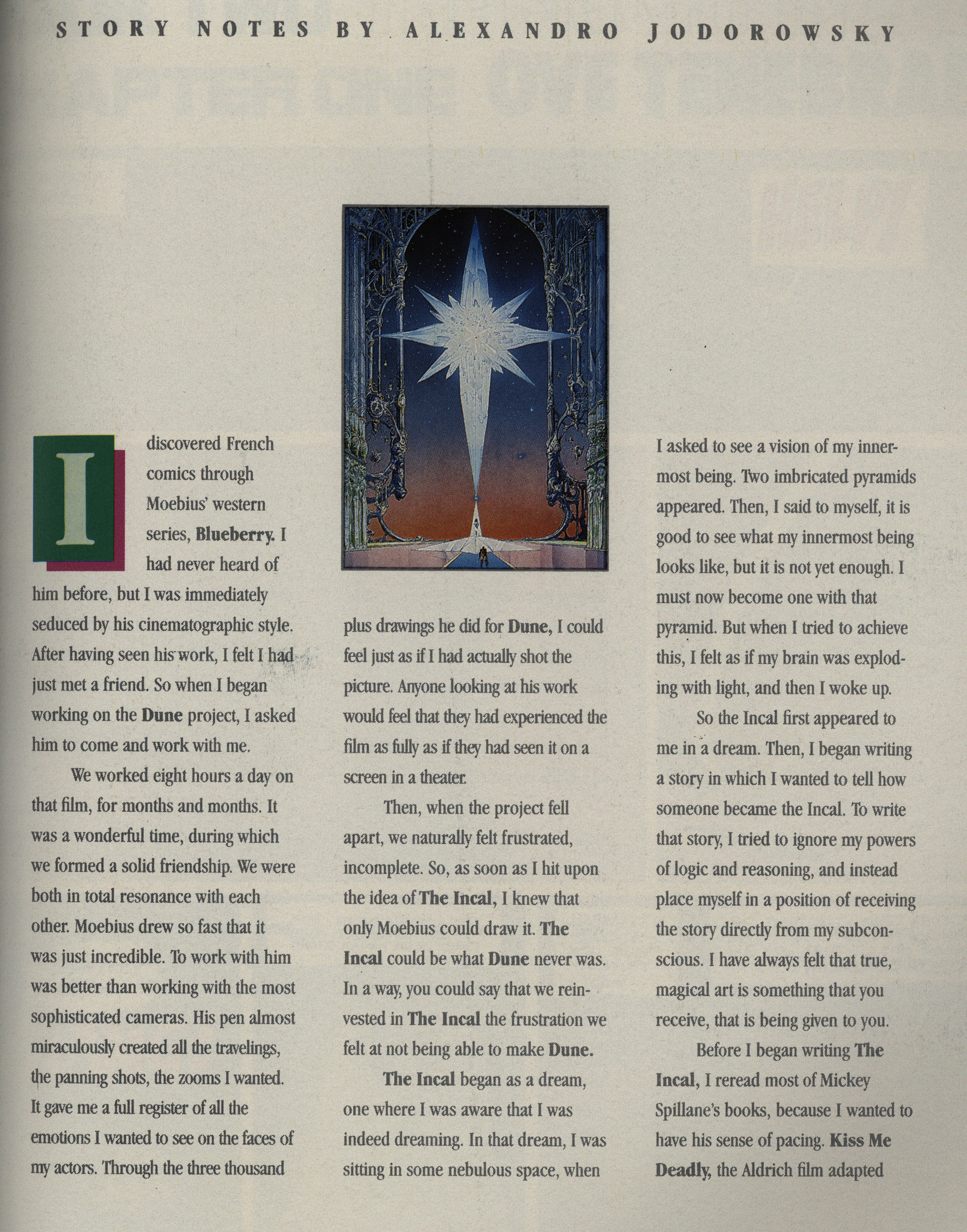 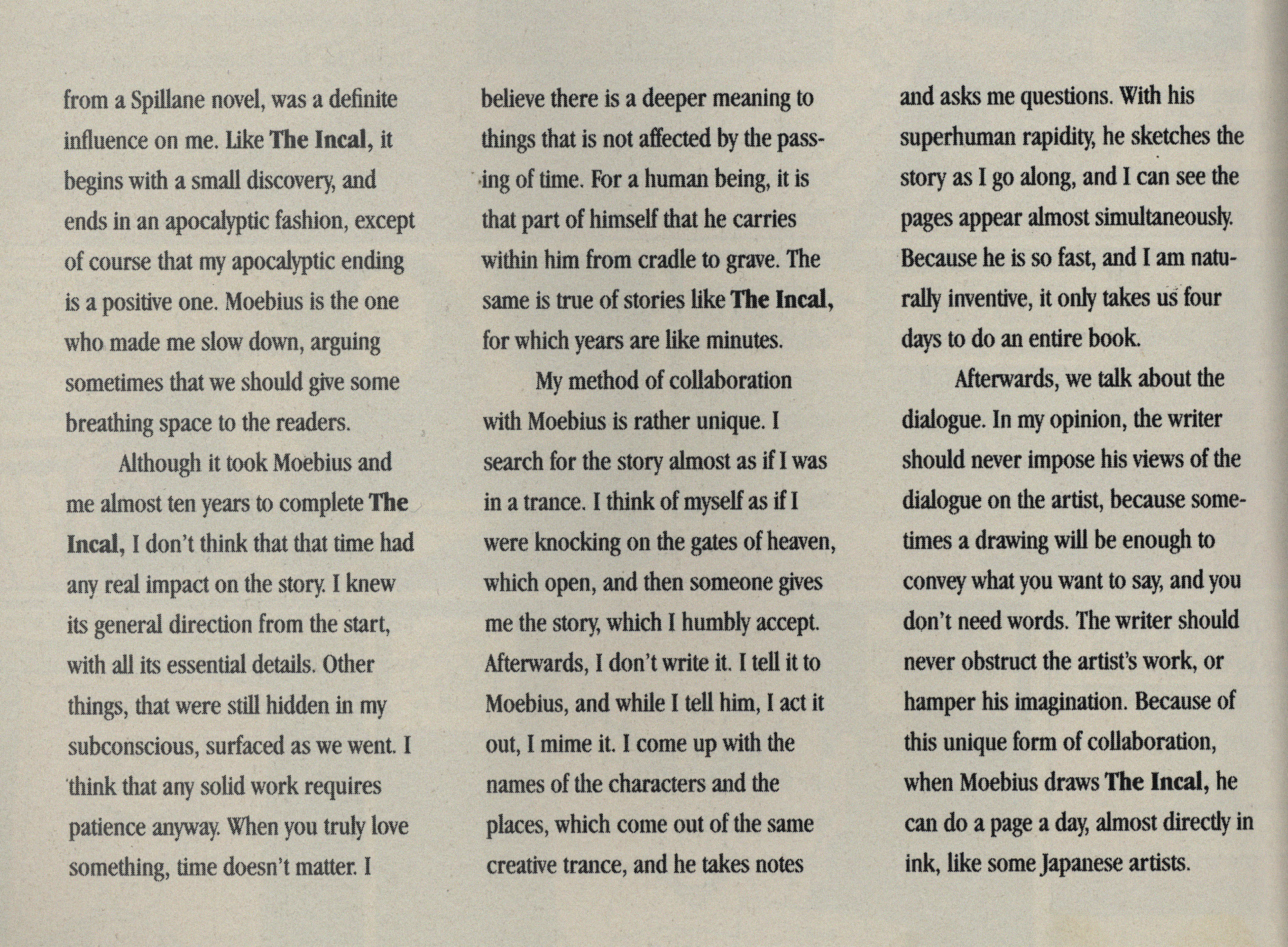 And Jodorowsky pretty much explains why here: Moebius doesn’t work from a script, but by having Jodorowsky act out the storyline while taking notes. And then (I’m reading between the lines here a bit) does whatever he wants. So it’s no wonder that the non-Moebius Jodorowsky comics read nothing like the ones Moebius isn’t involved with. 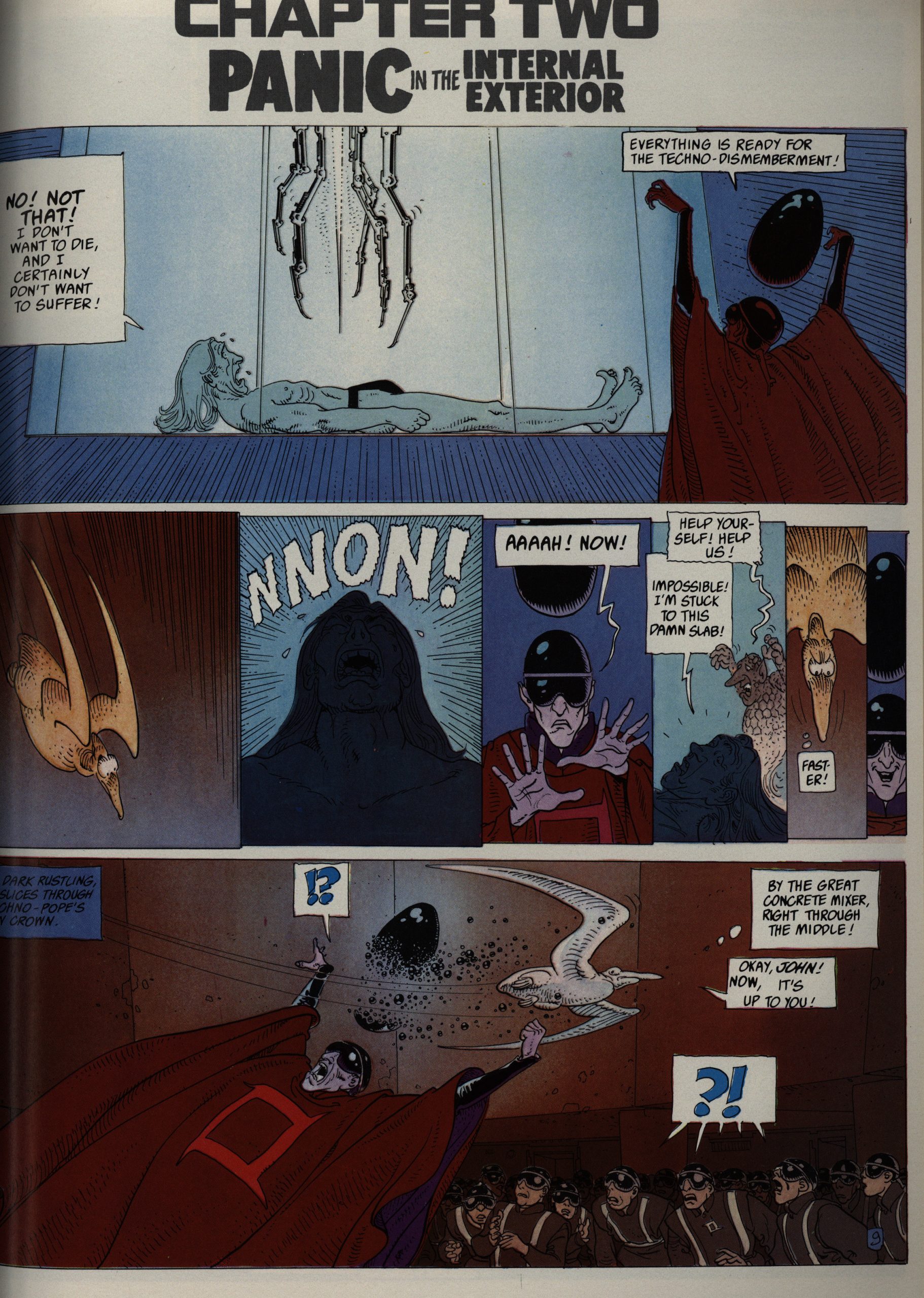 Some of the gags introduced (like Difool being driven by four base feeling manifested as different creatures (like that pebble guy in the fifth panel)) are abandoned without much of an explanation. I think.

The storytelling sometimes feels awkwardly old-fashioned, what with captions like the one in the final panel there, describing what’s going on in the panel. 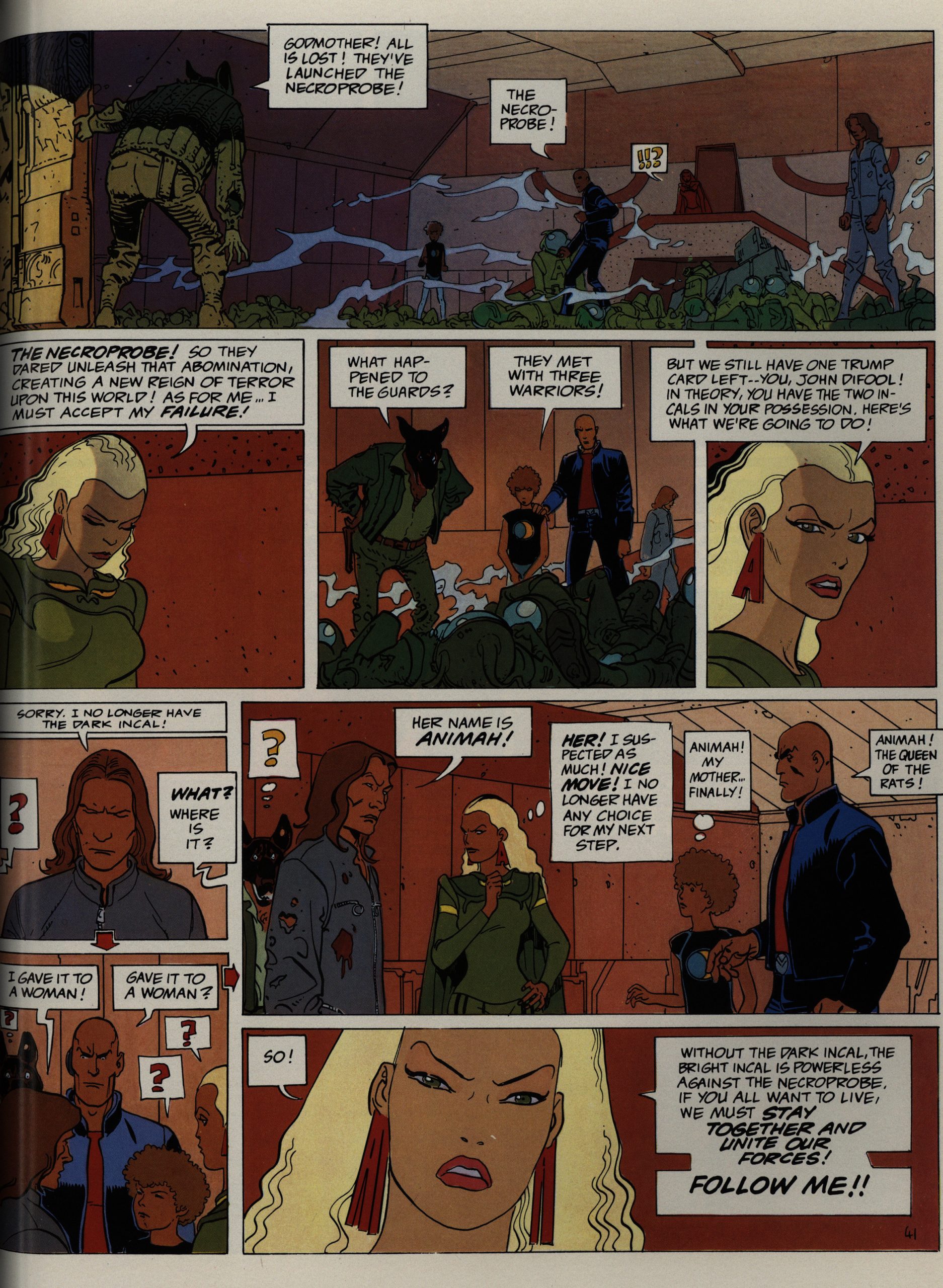 And there’s a lot of scenes of people standing around talking about what’s going on. I mean, they’re not telling us stuff that we really know before (most of the time), and it’s interesting stuff, but it sometimes feels a little bit cramped. But there’s so many things going one, from the “necrobot” to the talking concrete bird, to the guy with the dog head, so… well… everything that nothing is ever boring. And the artwork is gorgeous and reads so effortlessly. 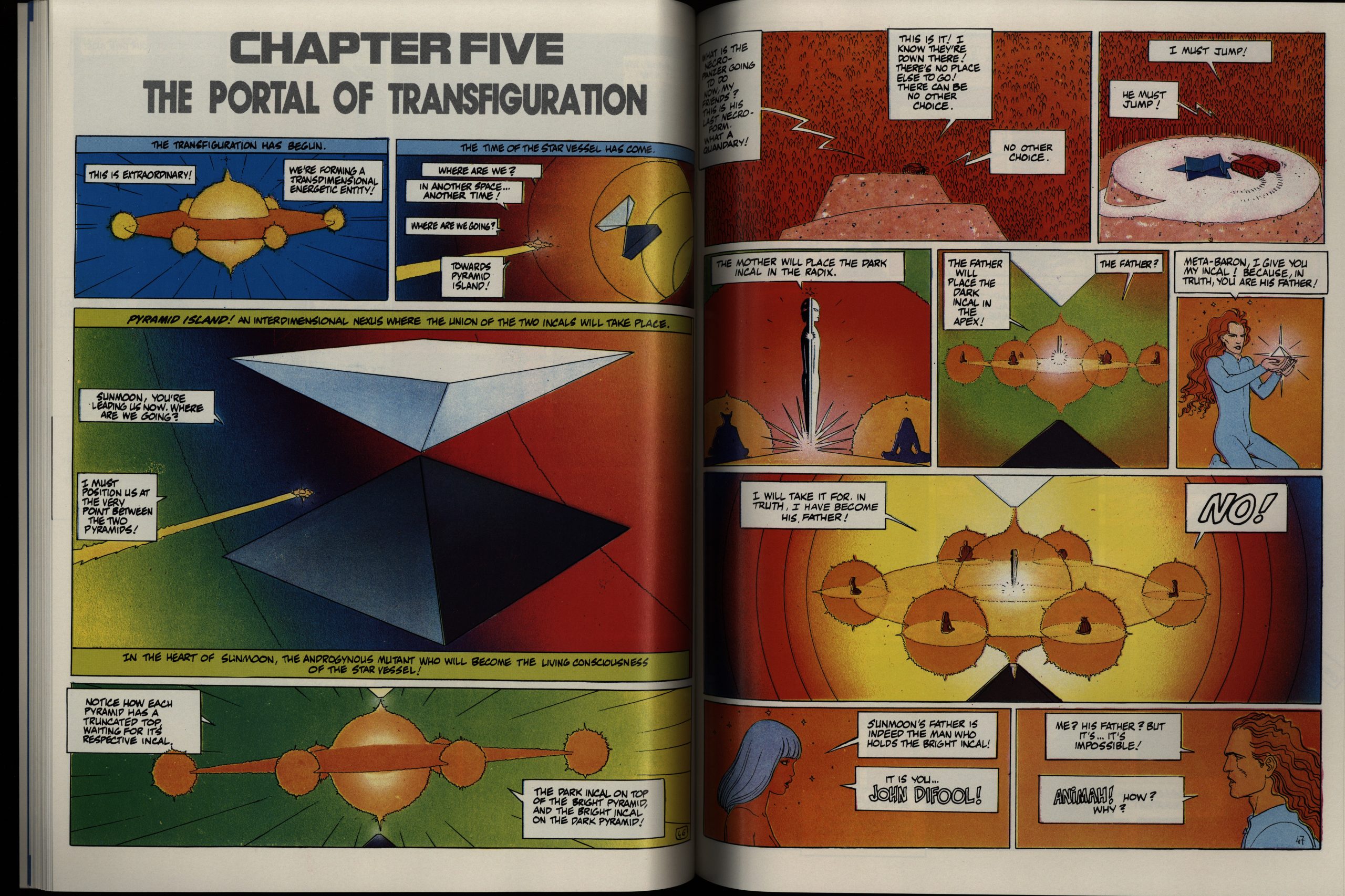 OK, when they go all metaphysical my interest does dip a bit. I’m just shallow, I guess. 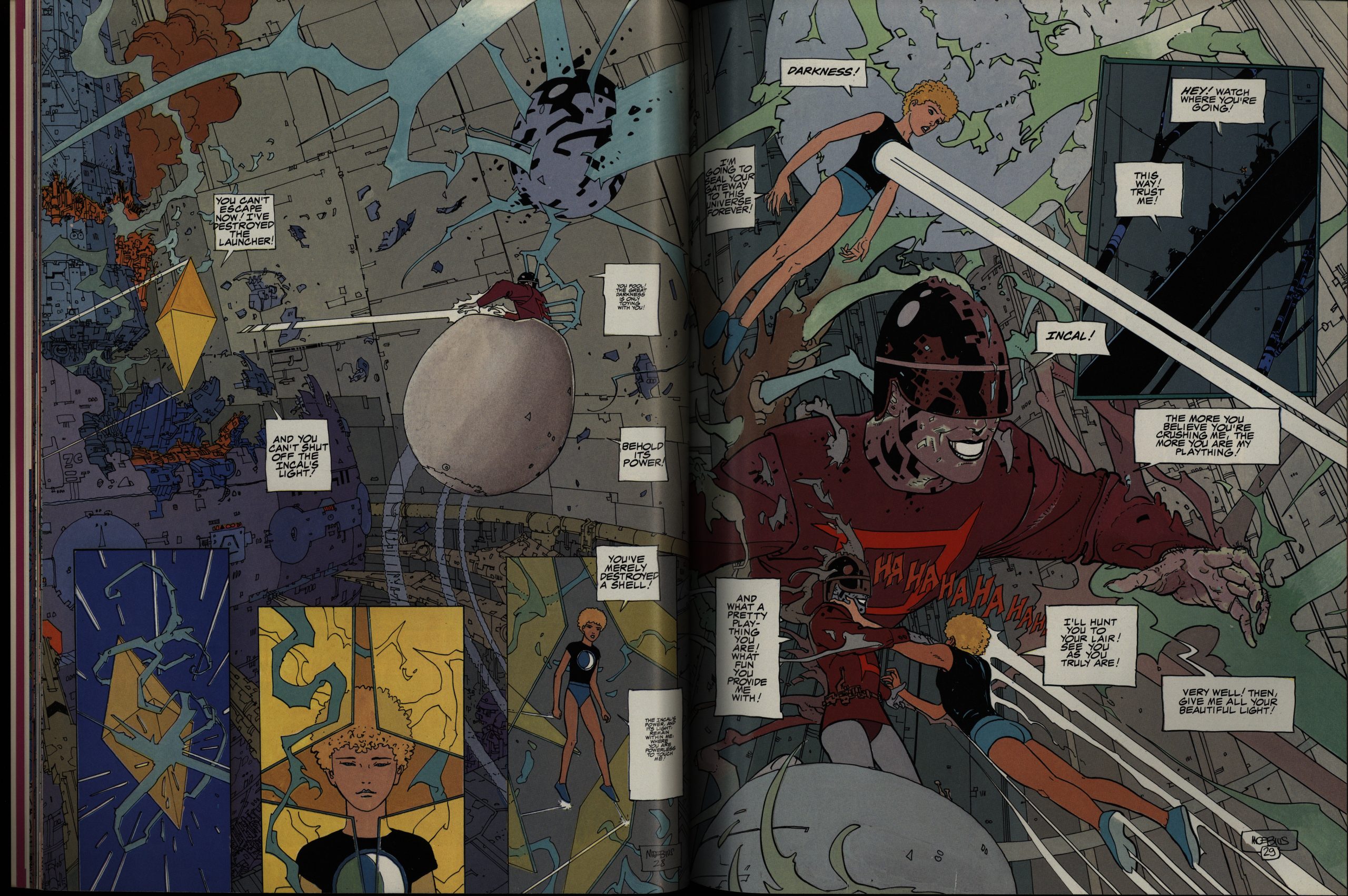 The third and final volume I’ve never read before. The first four parts I read and re-read endlessly as a teenager, but the final part was published later and I never got around to buying it. Which is really weird. I have a feeling that I felt that I might already have bought it? That it was in storage somewhere when I started at the University? Whatever’s the case, reading it all now had a certain thrill.

Especially since the final section starts off in a quite different style: It uses more flashy layouts instead of staid panels. 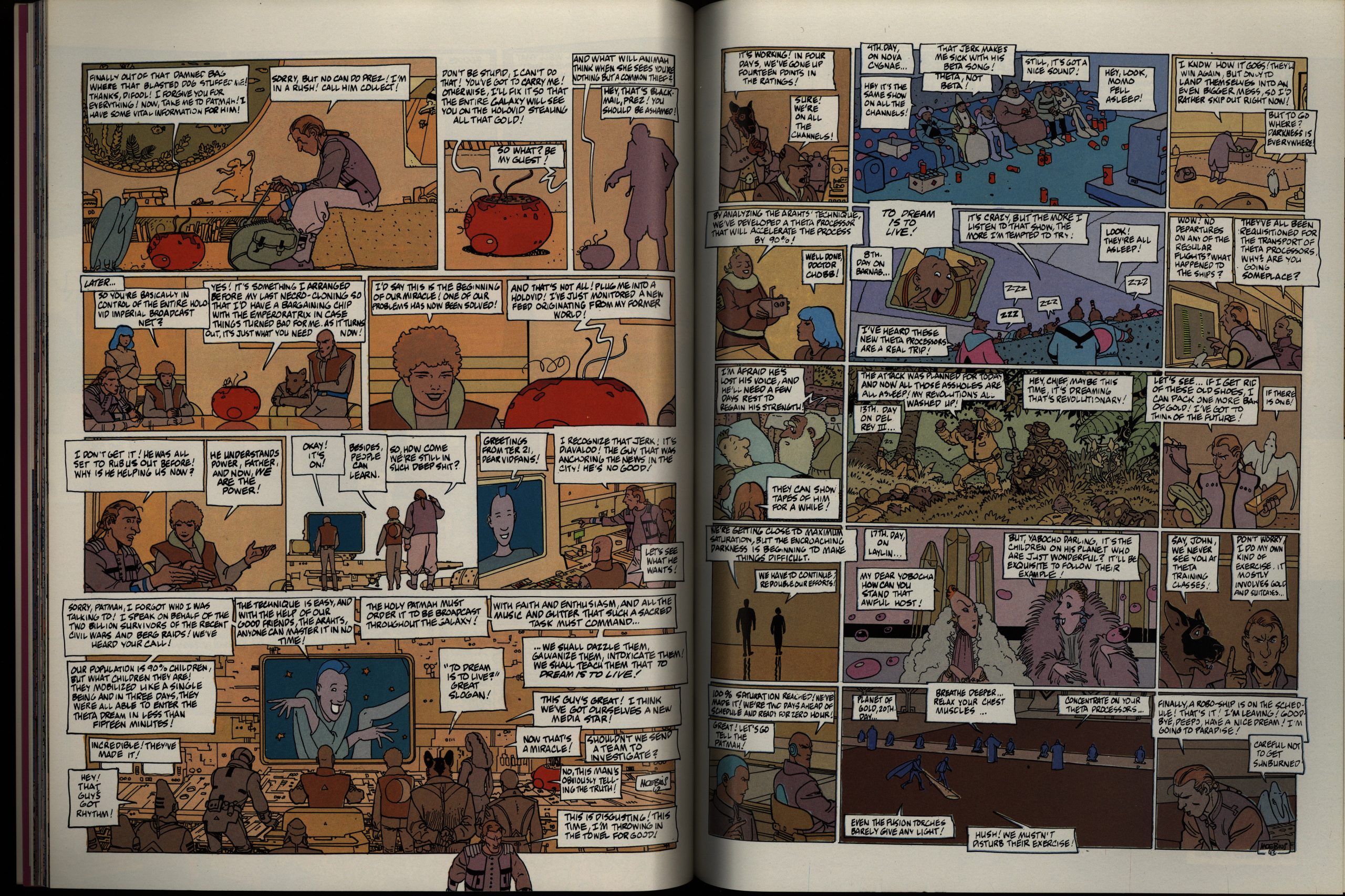 And then suddenly it snaps back to an even more condensed, packed storytelling style. Did Moebius suddenly decide that if he continued in the first style, it’d all take several hundred pages?

Anyway, this teensy-panel style works great for the funny bits, of which there are many. I mean, the entire series mixes humour with action and “spirituality” throughout, but the final part is perhaps the funniest. 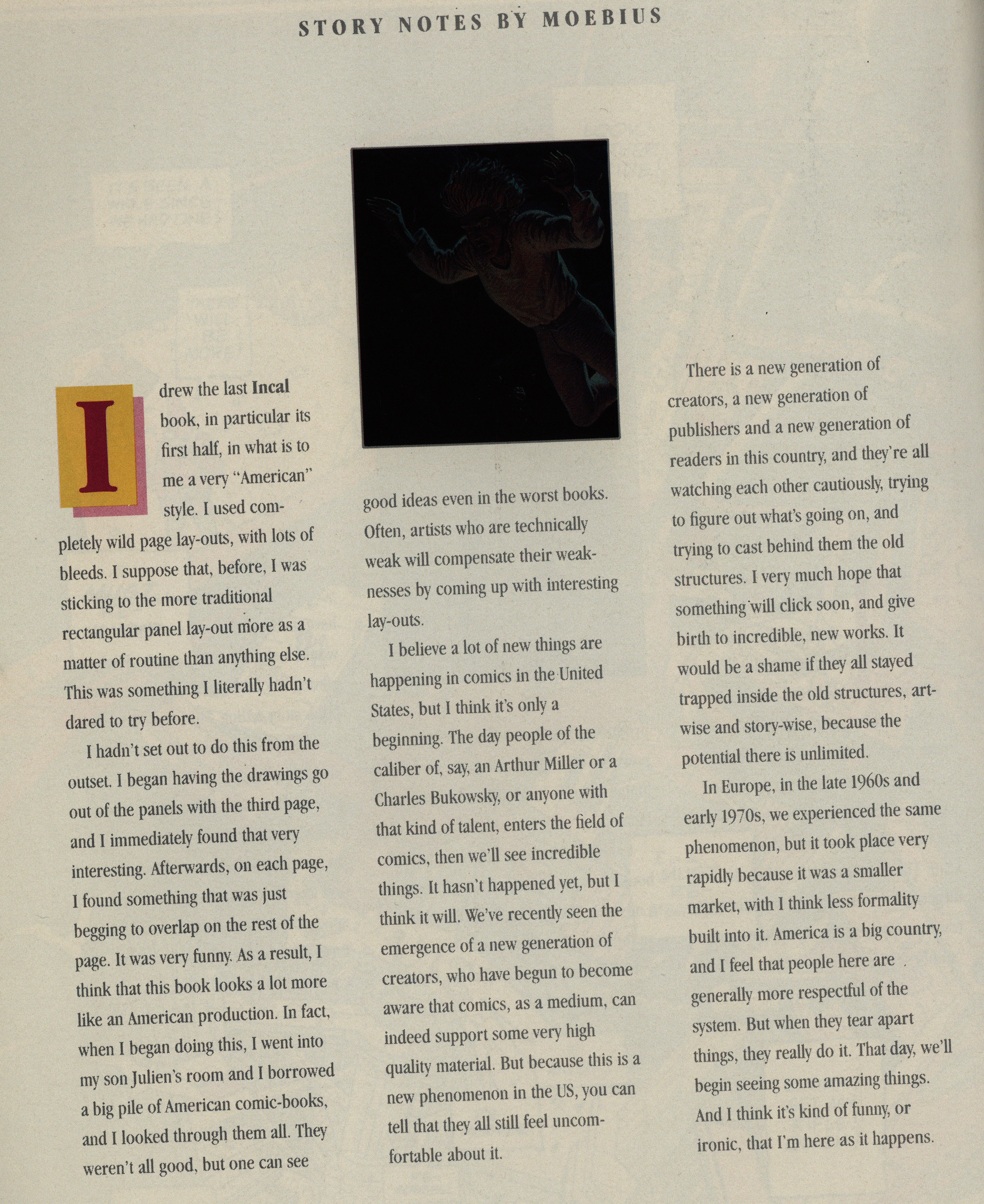 Aha! Moebius says that he was consciously going for a more US style layout at the start of the final volume… but he doesn’t explain why he then dropped it again.

I really enjoyed (re-)reading these comics today. It holds up.

Comics culture is rarely treated to a
production of the caliber of The In-
cal. Almost any discriminating reader
will have reservations about some as-
pects of these books, created over the
span of eight years by a uorld-class team
of imaginations, writer Alexandro Jo
dorowsky and artist Moebius (Jean
Giraud). But misgivings about the
perfect success of the project have to
be tempered by an appreciation of the
generally high standards of the con-
ception, the script, and the graphics:
these books might well be claimed,
understandably, to be without parallel
in present comics literature. The col-
laboration of these two minds has
yielded up a creature quite unlike their
separate work, a pseudo-science fan-
tasy on the grand scale.

And Moebius’ style and design
complement that polyglot quality ex-
cellently. He has a genius for form that
is as authoritative and aesthetic in its
high-tech applications as in its more
organic contexts. His deft sense of per-
spective and architectuial ambience
adds ingeniously articulated space and
an epic-panoramic quality without
which we could hardly believe the
coexistence of the many settings
among which the story shuttles. The
grandeur of architectural design and
the noble or debased quality of life to
which it is a testimony demonstrates
that Moebius is one Of Our very few
fantasists whose imagination — like
that of Williamson. Krenkel, Syd
Mead, and few others — reaches into
the civic, into the cosmopolitan inter-
actions of classes and peoples. And,
repeatedly, Moebius makes a deft dis-
play of concrete or sculptural texture
and pattern. a sheen of figurations
with their own integral style and rhy-
thrn too irrational to have been access-
ed by facile visualizing skill: this kind
of generation of existential density, a
generosity of excess detail (much as
Borges mobilizes to make his fabri-
cated stories carry the ring of truth),
makes these fantasies read not as il-
lusions but as layouts with their Own
virtual reality. It is a testament to the
quality of Jodorowsky and Moebius’
imaginations that the cheap expecta-
tions of the reader are, more often than
not. defeated and transmuted into a
higher kind of reading, less governed
by routine and cliche.

The Incal is an epic marred by re-
peated lapses in tone, in quality of im-
agination: in the first volume, the
Olympian epicenes, the hunchbacks,
the Meta-Baron (with his Meta-Bunk-
er and Meta-Skiff), Sunmoon, the
kidnapping ploy — these elements and
Others make a noticeable descent in-
to bathos. In Volume II, the Queen of
the rats and the psycho-rats them-
selves, Gorgoo the Filthy (which
sounds like a Stan Lee title), the
Necro-Robot, and a number of New
Age stratagems in the story — the gen-
erating energies, the kitsch of forgive-
ness, the mystical chastisement Of ego,
the crystal-fetishism — are likewise
disappointingly; banal.

The Incal has been reprinted many times in various formats, one of which had a horrible recolouring job, but people liked it anyway:

It crackles with invention: if you like your sci-fi, you’ll love this.

Just when I thought that John’s moment of heroic transformation had come, he would bitch about his destiny and run away. Every time. Throughout the story, John is continually calling upon the mystical Incal to save him from danger, much to the Incal’s chagrin. Three volumes into this story, John is still as unlikable as page one. But unlikable in a charming kind of way? It’s sort of like he’s so damn terrible that you start to root against his evolution and revel in his continued wickedness.