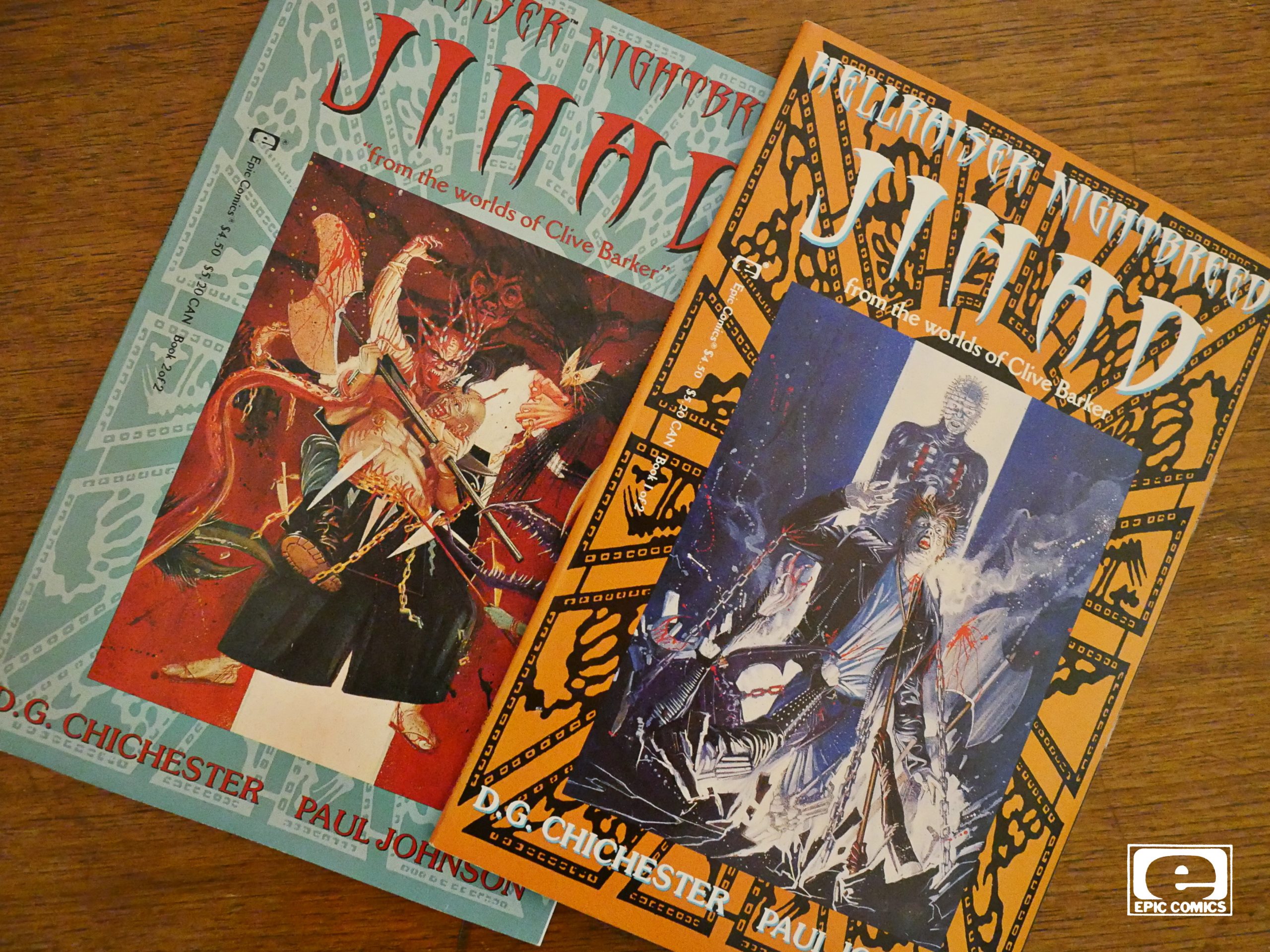 Right. So this is the crossover between the two Clive Barker properties that Epic were publishing at the time: Hellraiser and Nightbreed. When I read the Nightbreed series, in the middle everything changed and every other page there was a “* This happened in Jihad” to explain why, and it was quite like reading other serial comics from the major publishers: You’re happily reading something you’re interested in, and then everything goes to shit because there was a company-wide crossover that short-circuited everything you liked about the book you’re reading.

Well, like that, except that the Nightbreed series was shit to begin with, so it didn’t really matter. 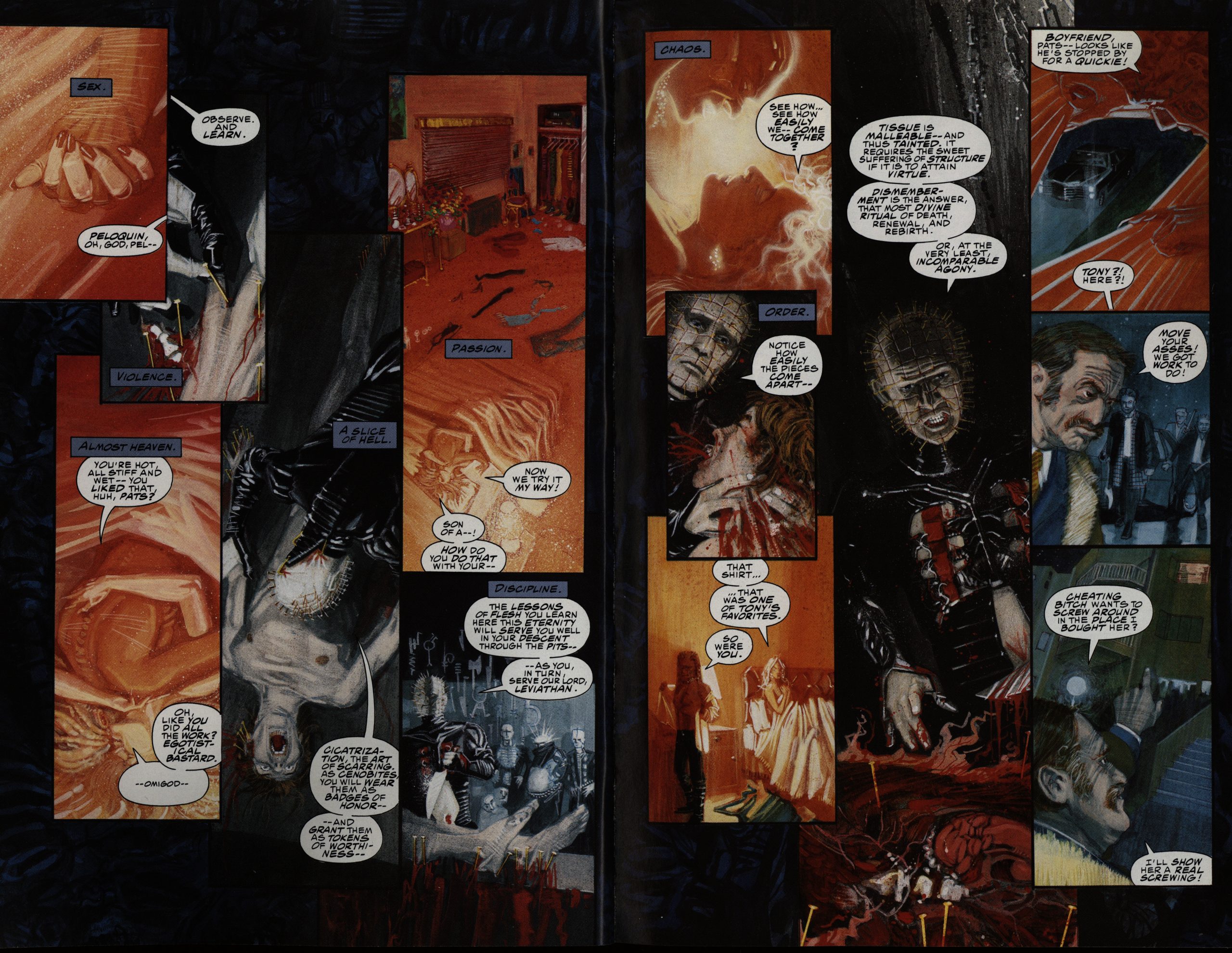 Chichester and Johnson go for a storytelling style that was all the rage at the time (a sort of post-modernism multiplicity of voices thing (lite)), but the problem with using it here is that if you’re not confident that there’s going to be anything worth engaging with, it’s easy to have your eyes just glaze over and wish they’d get to the point. And, c’mon: This is a Hellraiser/Nightbreed crossover. I have zero faith in this. 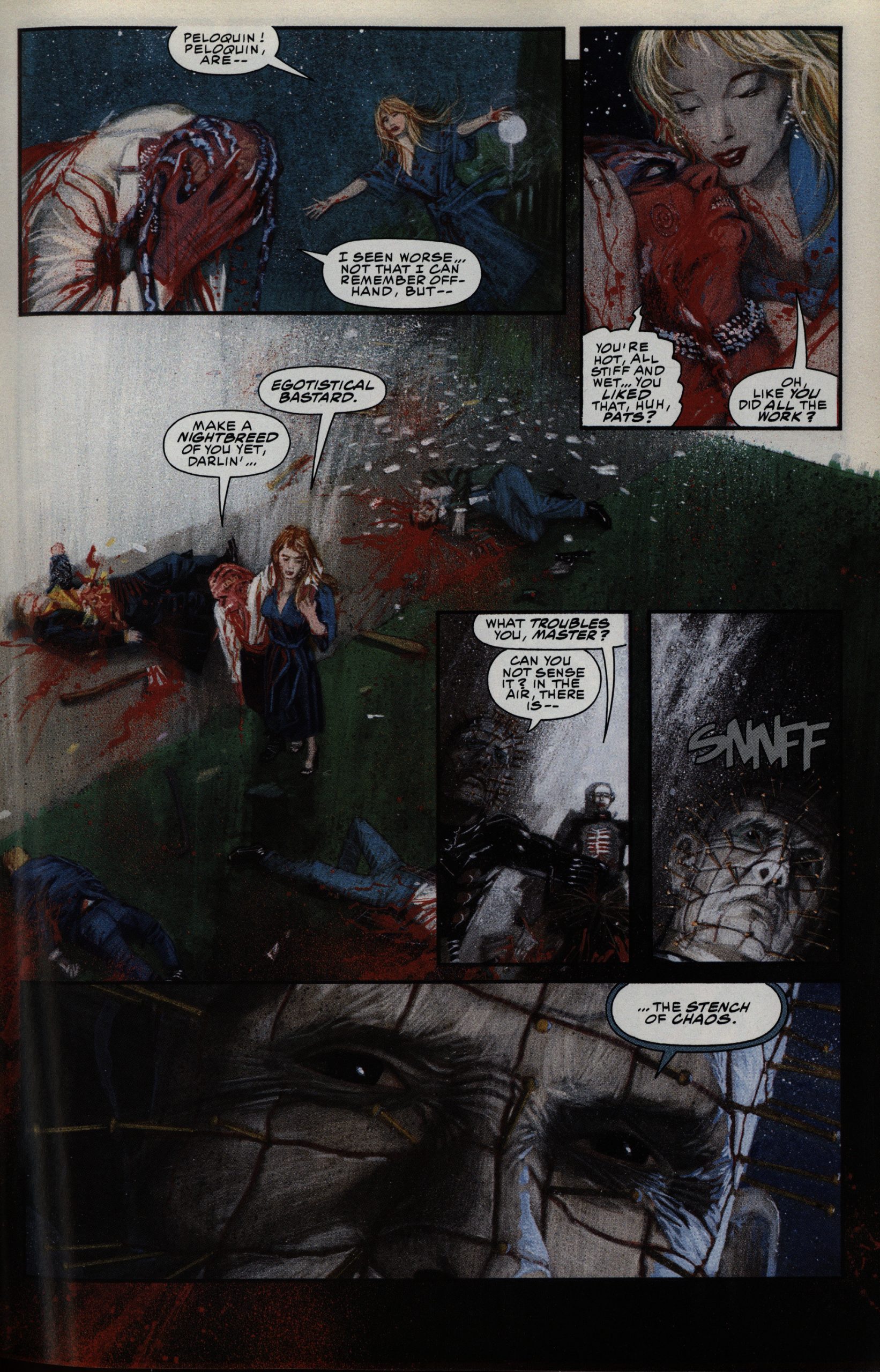 The reason for the crossover is that Pinhead thinks that the Nightbreed are too chaotic, so Hell declares war on them. 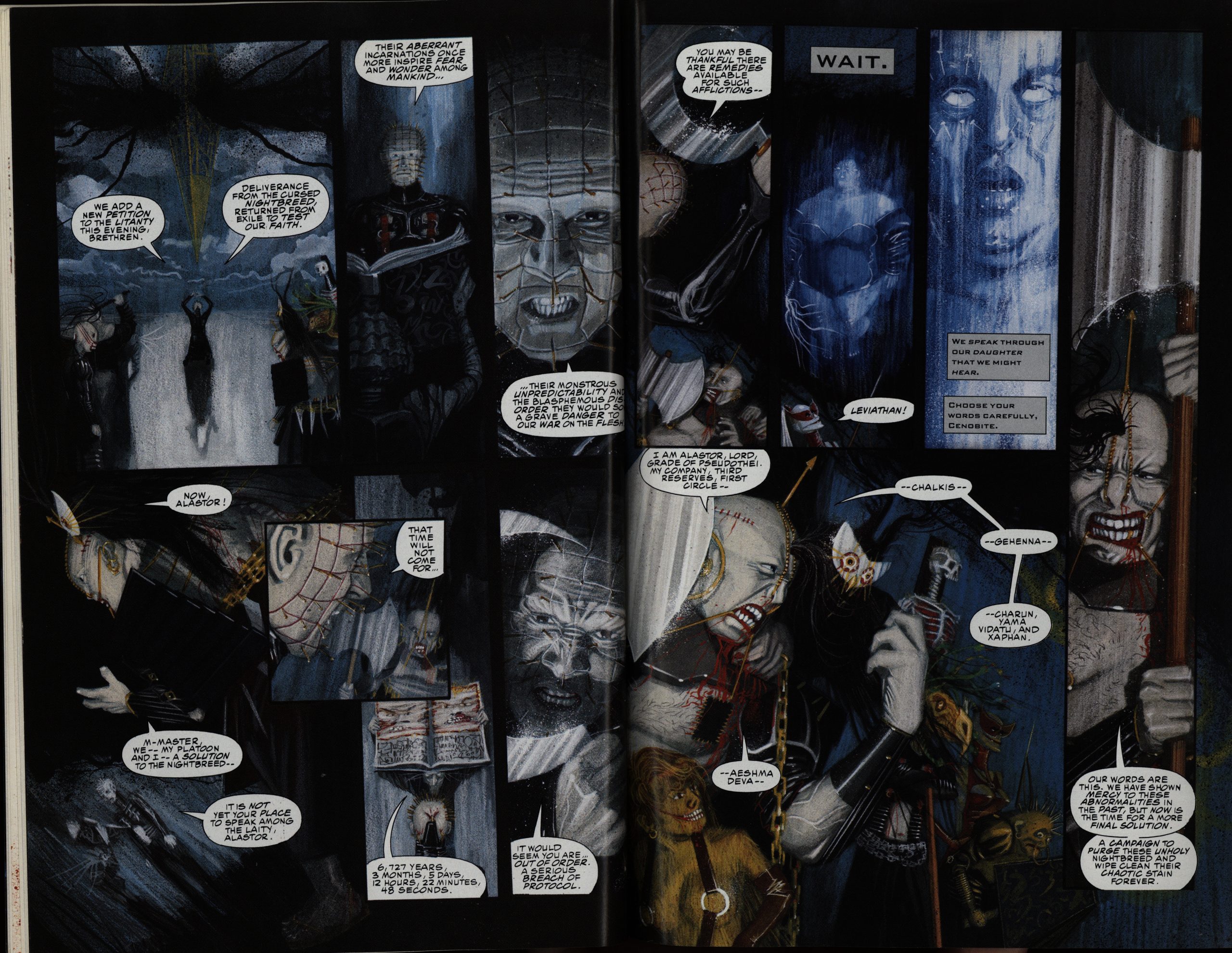 Clive Barker’s designs for the original bunch of Cenobites was inspired. All of them, from Pinhead to the chattering guy, were just, to use a technical term, awesome. Here Chichester and Johnson come up with a new guy, and… it’s a fat bald guy… with an arrow sticking out of his head (pointing upwards)… And some golden chains attached to his mouth and nose… and… a ponytail… coming out of his forehead.

It’s like a random doodle, and then Johnson has to paint that random doodle a gazillion times. I feel his pain. 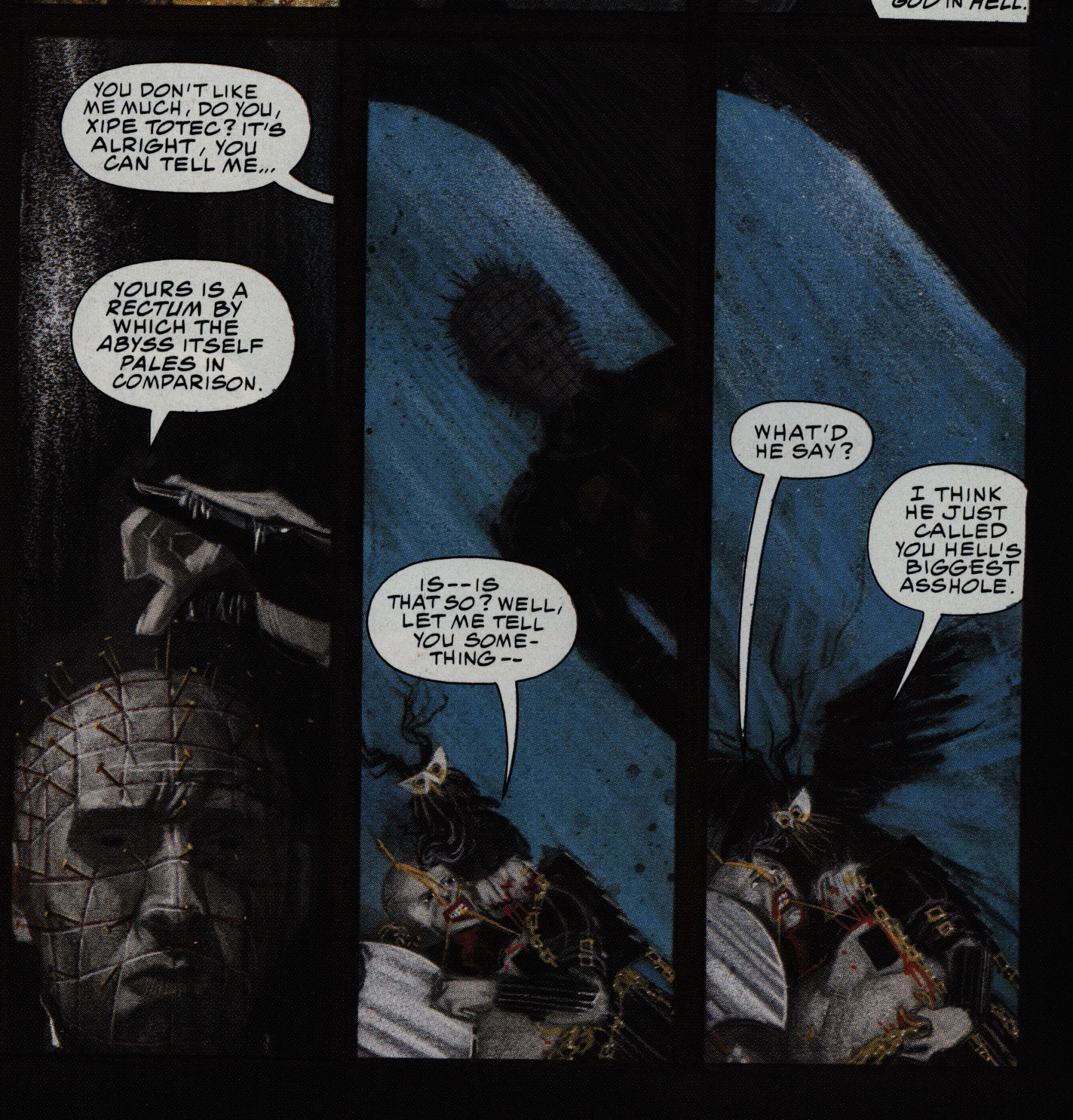 The dialogue is excessive and unusually turgid, but… at least there are some jokes. Not good ones, but still. 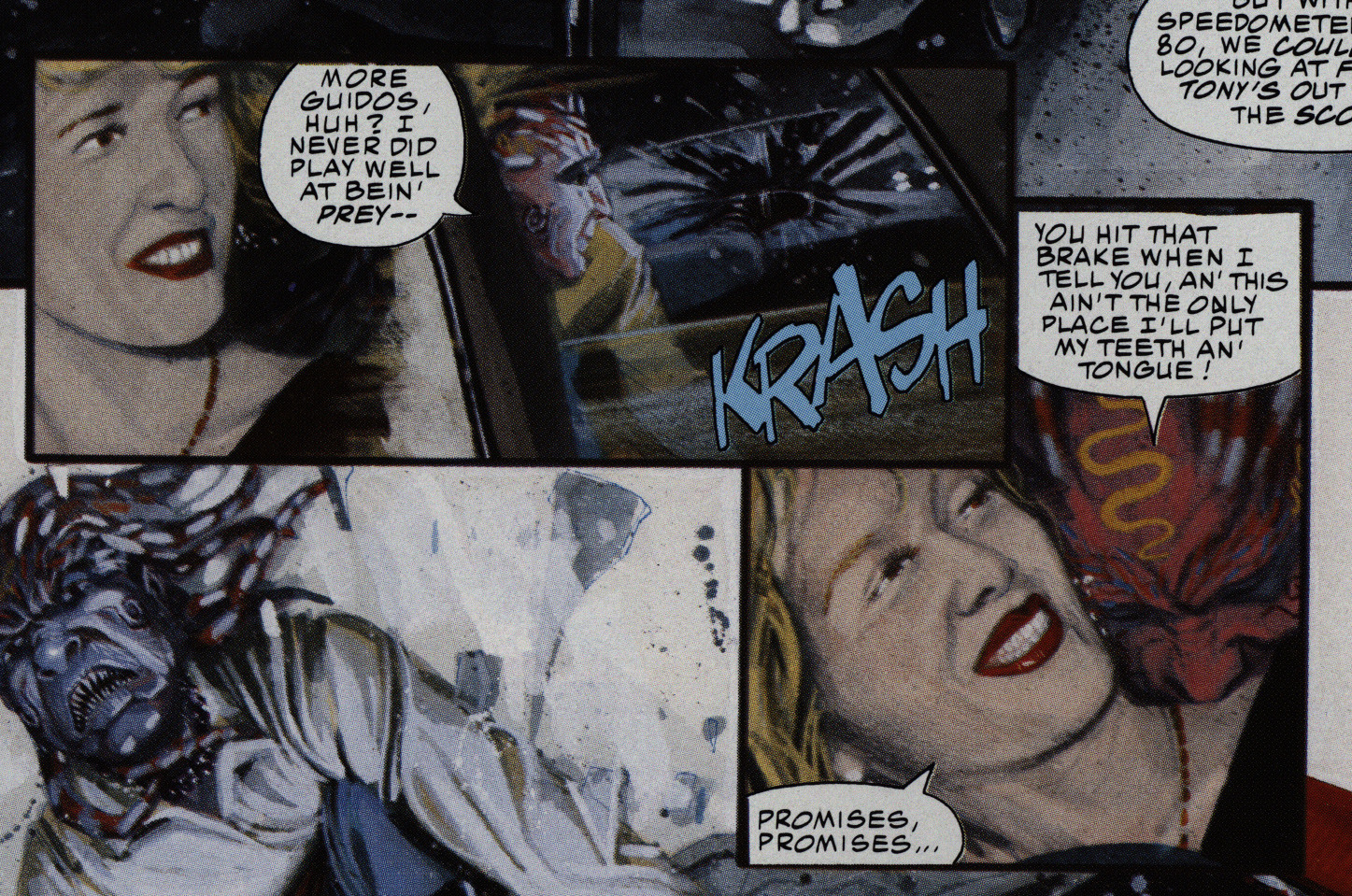 I had low expectations going in, but… this is pretty much an unreadable mess.

But that is a Grade-A insult.

THE “SONNY BONO TELL-ALL
AUTOBIOGRAPHY” MEDAL For
Event We Simply Couldn’t Care I ess
About was a close call. It almost went
to the Rocketeer movie, which was so
highly unmemorable in every respect
that I didn’t dare take a bathroom
break halfway through, lest I find
heart. , .only slightly better than Ste-
phen King turned out to be, a few
years back, when he made the terri-
ble Maximum Overdrive.
It’s worth noting here that, just as
King’s gÜvful flick came from a de-
cent short story called “Trucks,”
Barker’s were derived from a pair of
superior novellas called “Cabal” and
“The Hellbound Heart.” I have no
qualms about directing you to those
original sources. But since the com-
ics are based on the bloated and
gamey movies, the concept of
Cenobites Versus Nightbreed leaves
me with a colossal feeling of..
Ahhhhhh, Who Cares?

This was the most insightful review I could find on the interwebs:

I agree with this review, except the bit about the artwork:

The only reason this comic did not get 1 star from me is the artwork. The artwork is beautiful, breath-taking even. The story, however, is confusing. There is no real plot, no time line of events, and it’s difficult to figure out what is going on. Even the characters’ interactions with one another are murky, to say the least. What a disservice to Clive Barker!