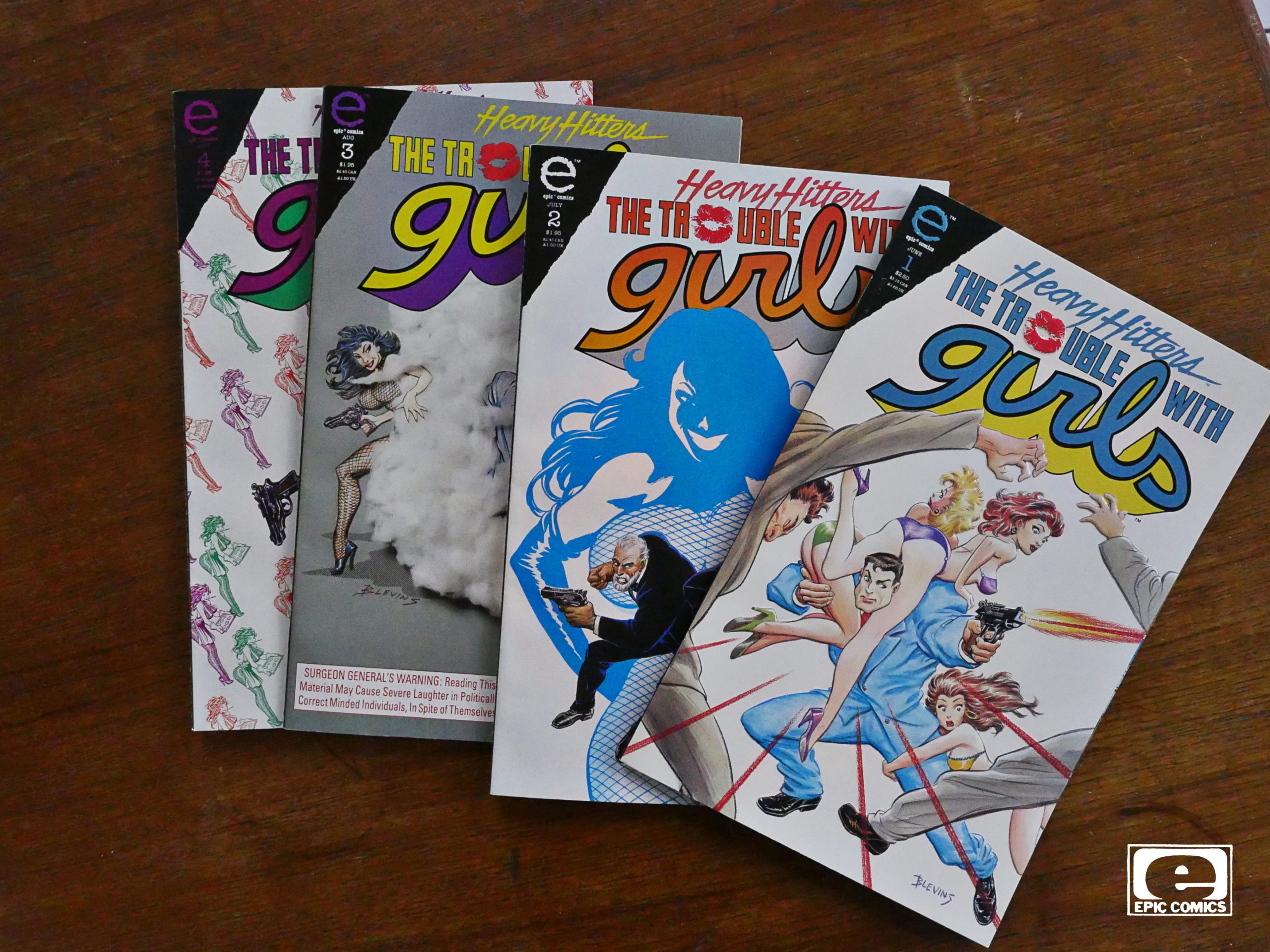 The Trouble With Girls: Night of the Lizard (1993) #1-4
by Gerard Jones, Will Jacobs, Bret Blevins, Russ Miller and Al Williamson

Anyway — my supposition that Epic’s “Heavy Hitters” rebrand was going to be all about doing Image-style comics is now looking more and more unlikely: Trouble With Girls was a humour series that had had quite long runs at some indie publishers, and doesn’t really fit with that, at all.

So now I don’t know what the point of the rebranding was. Perhaps this is an outlier, though… 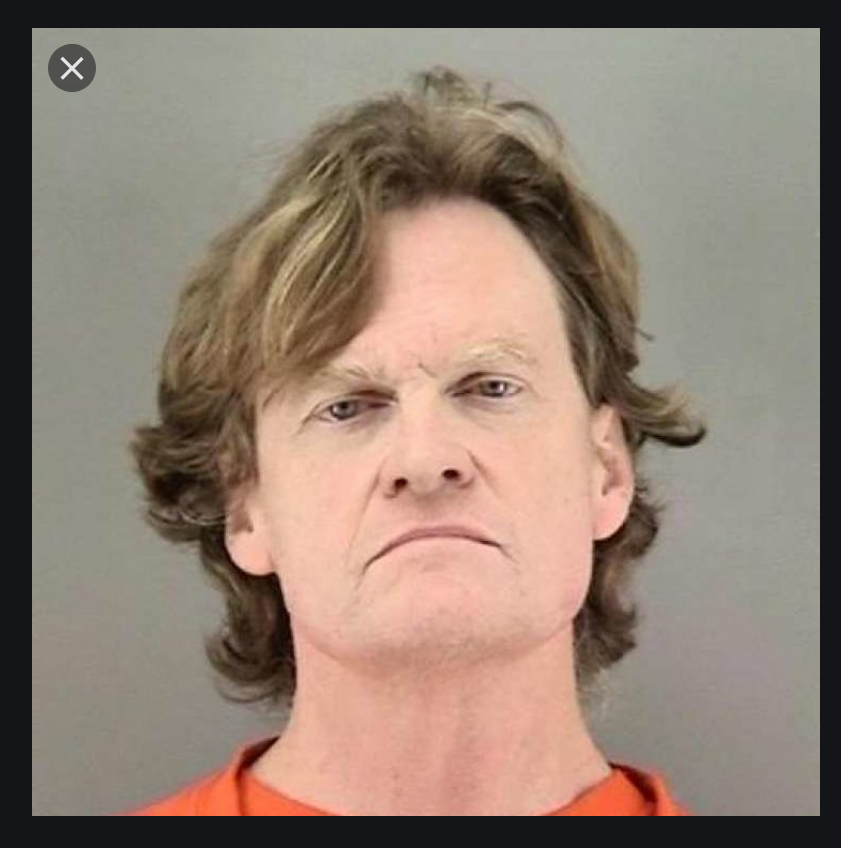 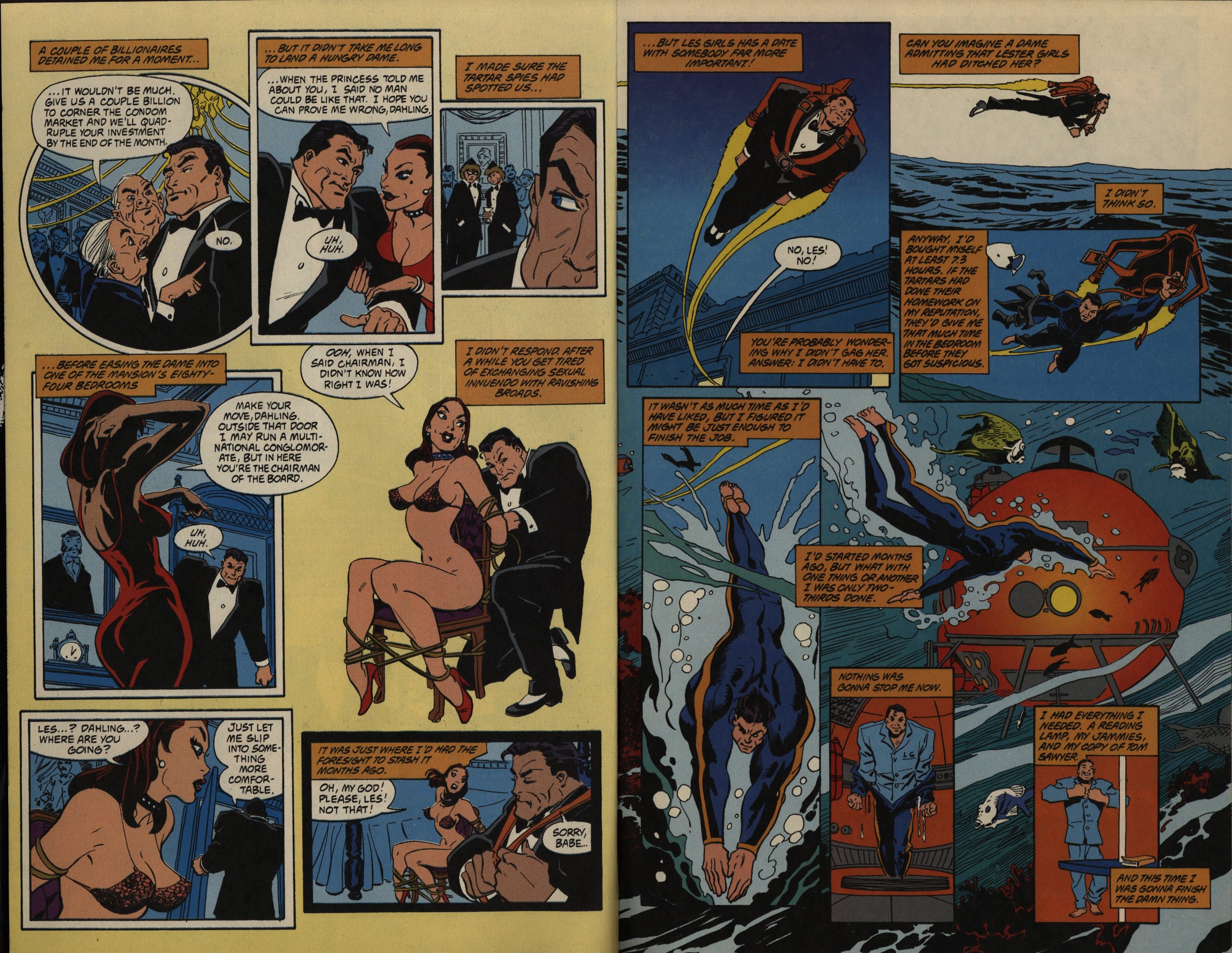 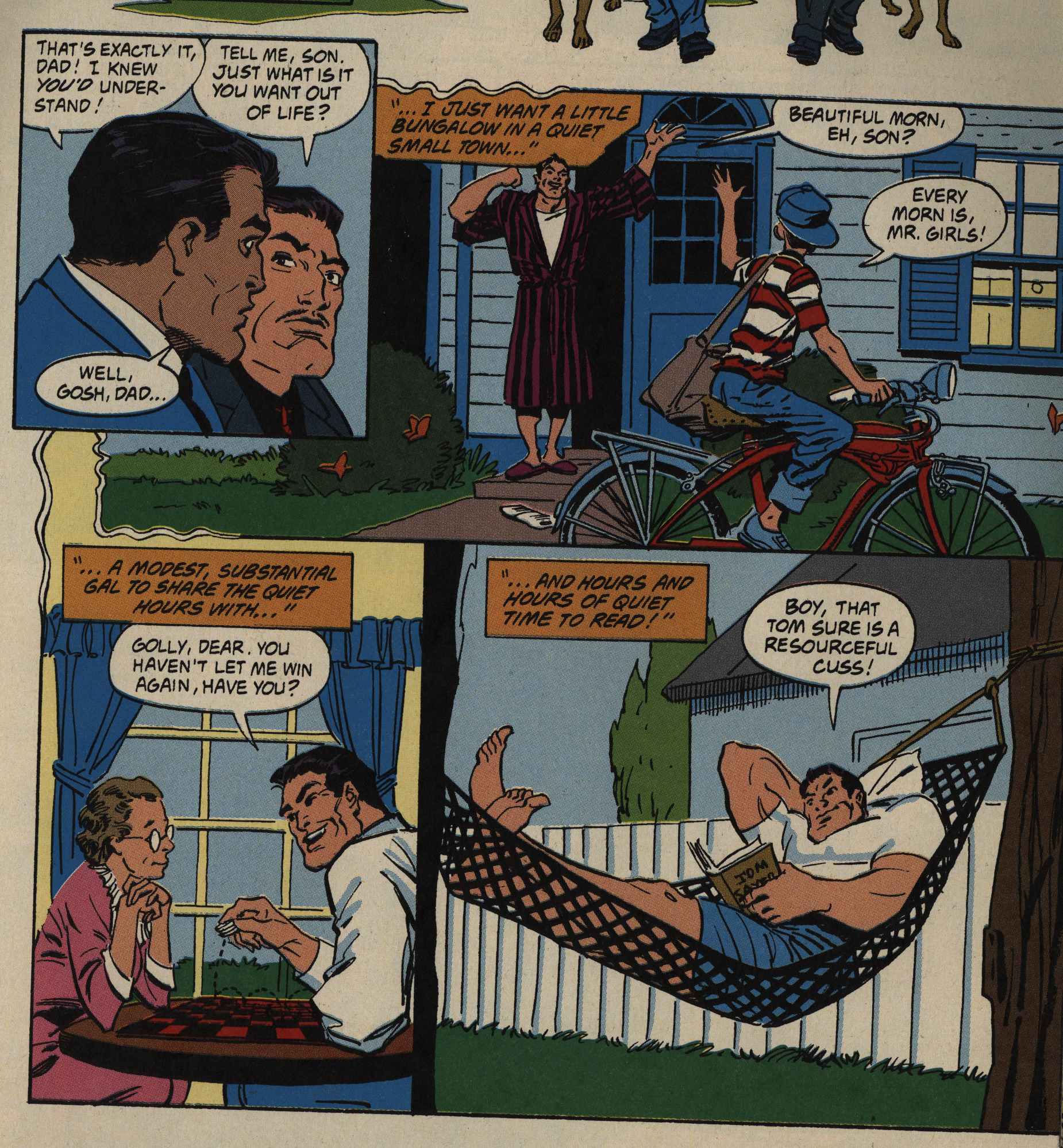 He just wants to settle for a quiet life in the suburbs. 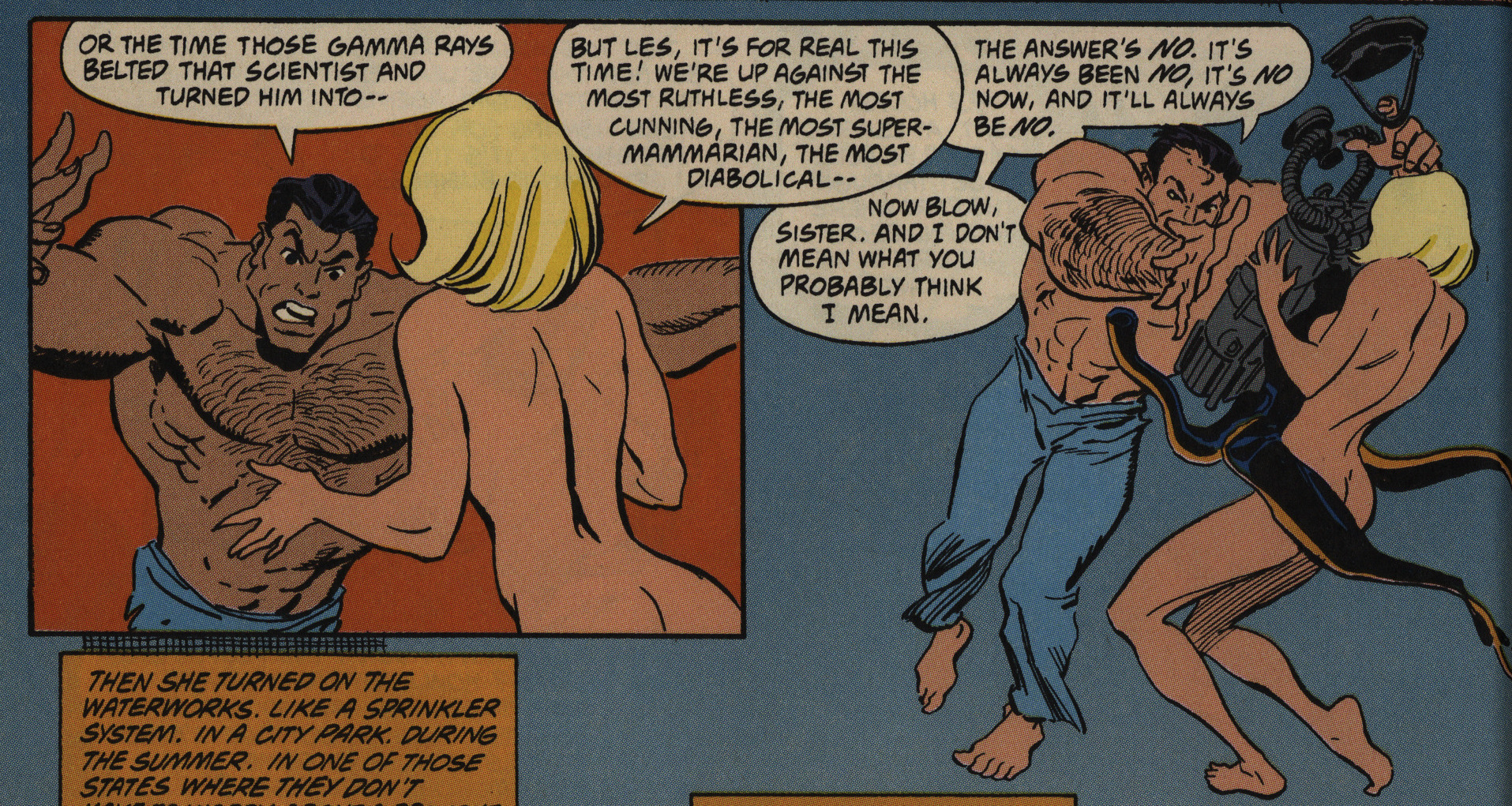 That’s not a totally original schtick, but in this context it all goes “hmm!”

I know, I’m all up in the latest Fraudian theories. 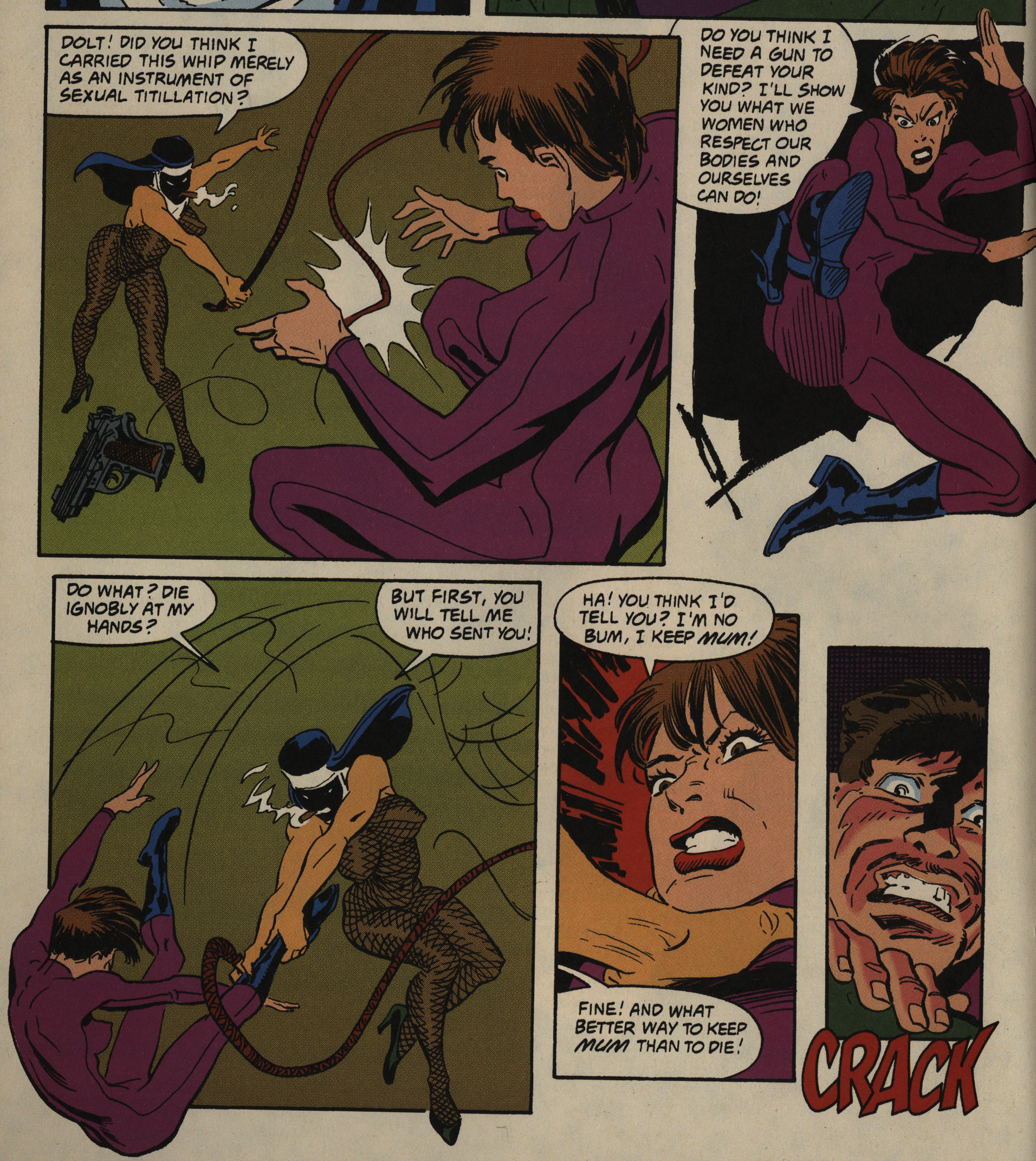 The humour is sometimes a bit too… I know, it’s shocking that a book where the main joke is that women are all oversexed and stuff would have do a joke like the above. It’s enough to make you sigh and reach for the dictionary to see how “misogynist” is spelled, isn’t it?

But I’m lazy, so I wouldn’t do that. I mean, the dictionary is way over on the shelf over there. 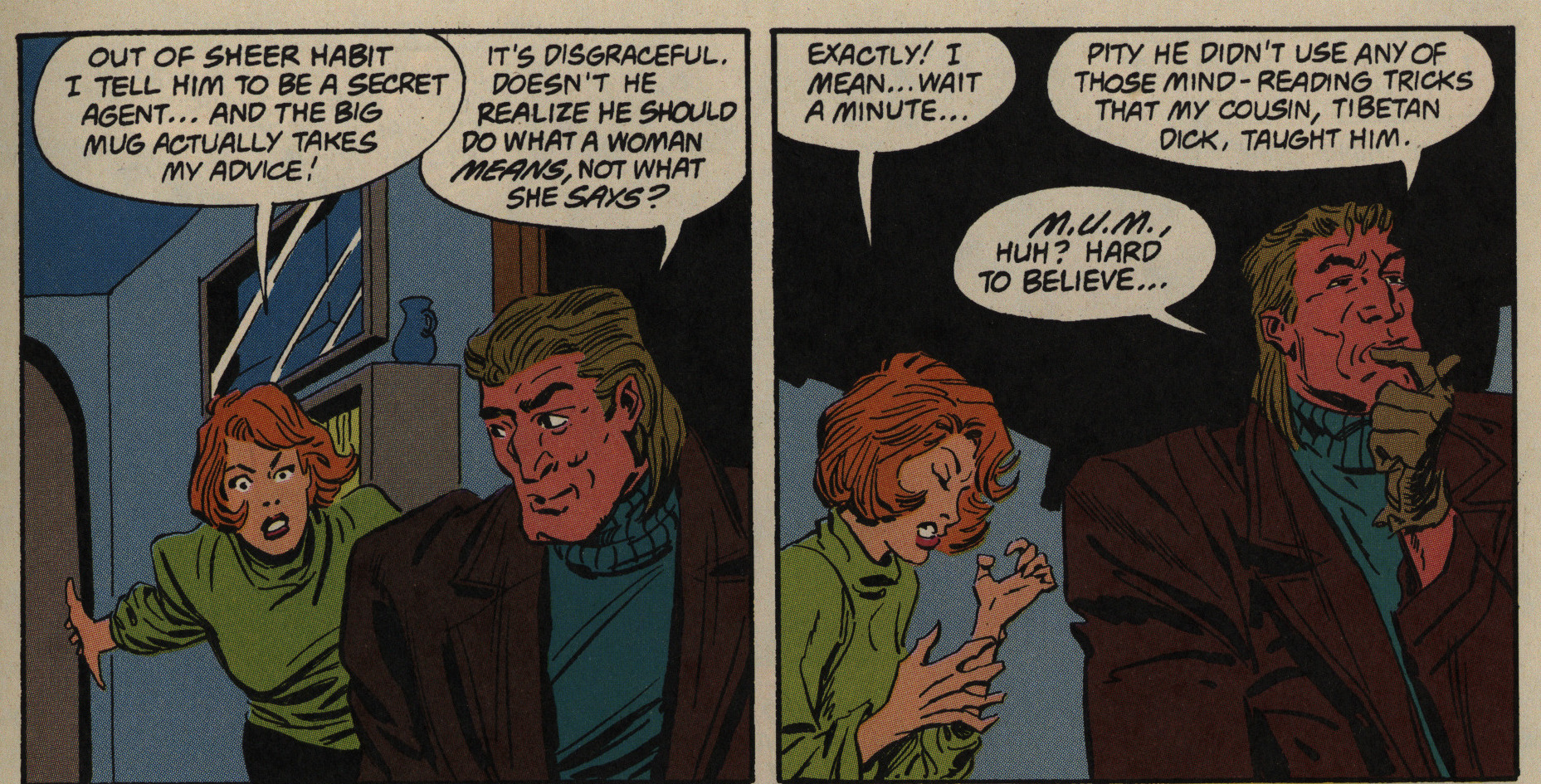 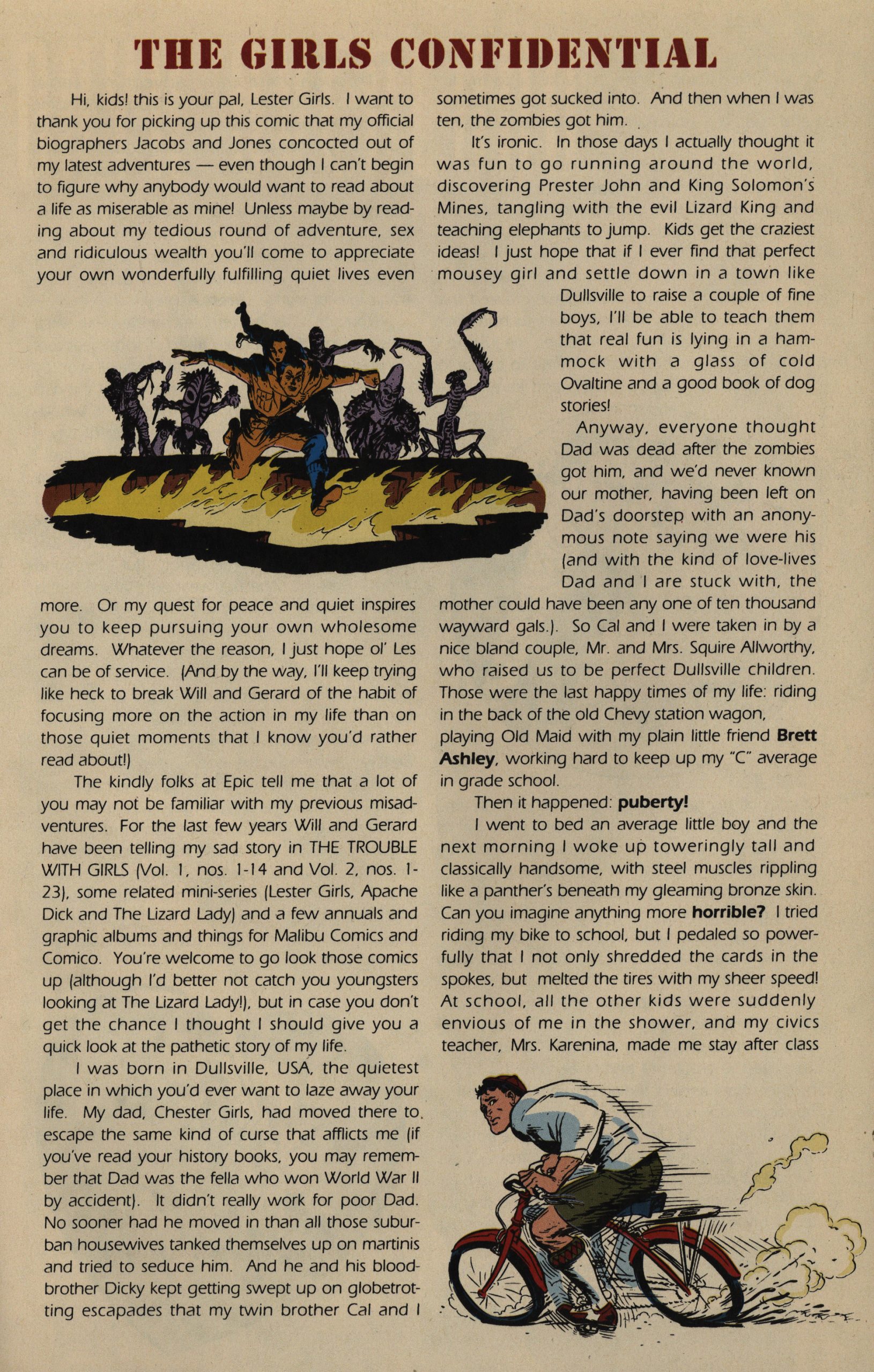 We get two pages of Girls’ backstory in each of the three first issues. That’s quite a long run. 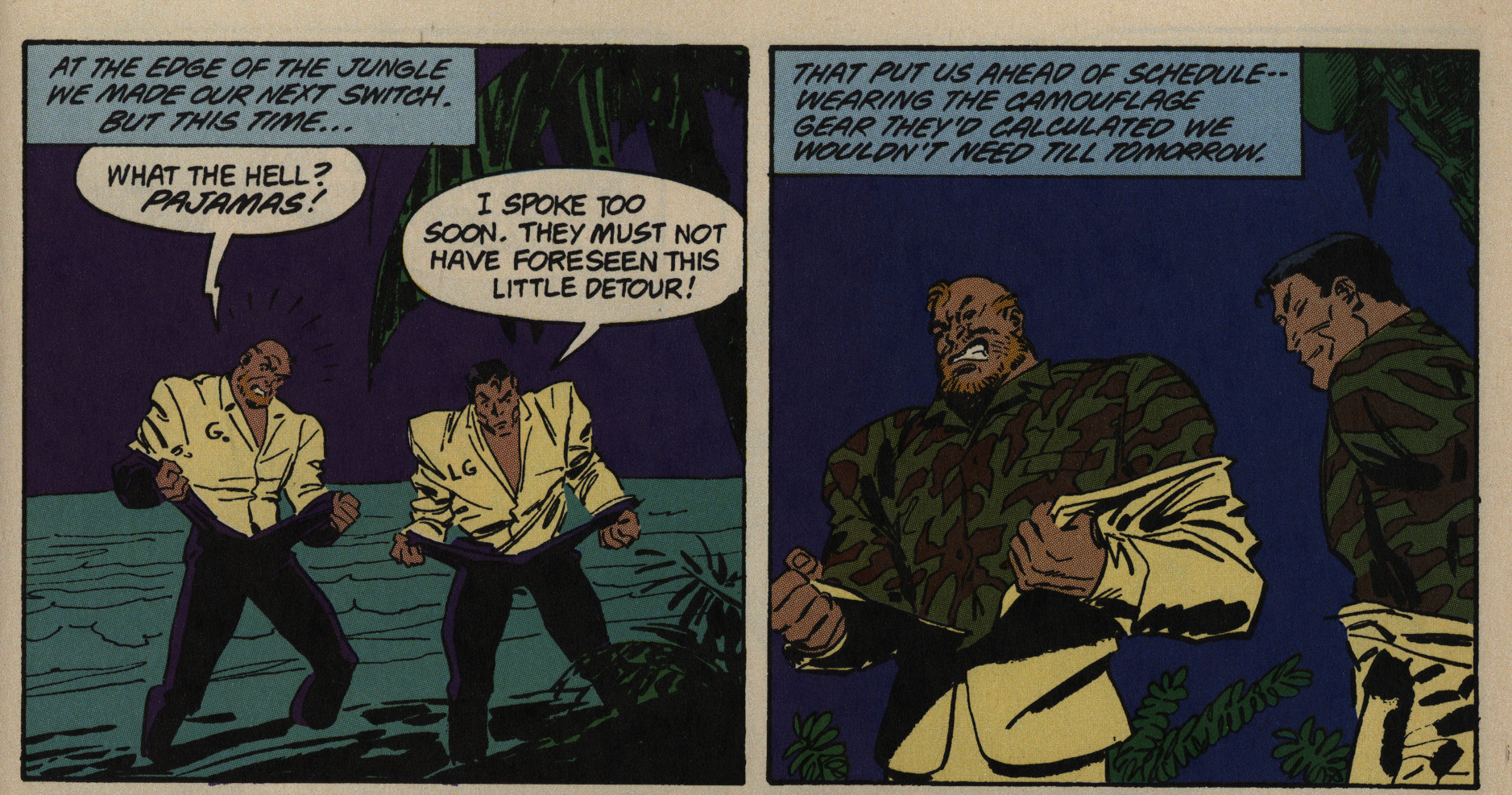 There are other jokes in here, like the As Seen In Many Cartoons joke about having a lot of outfits stacked on top of each other. I mean, it’s amusing? But it’s not actually “ha ha” funny. 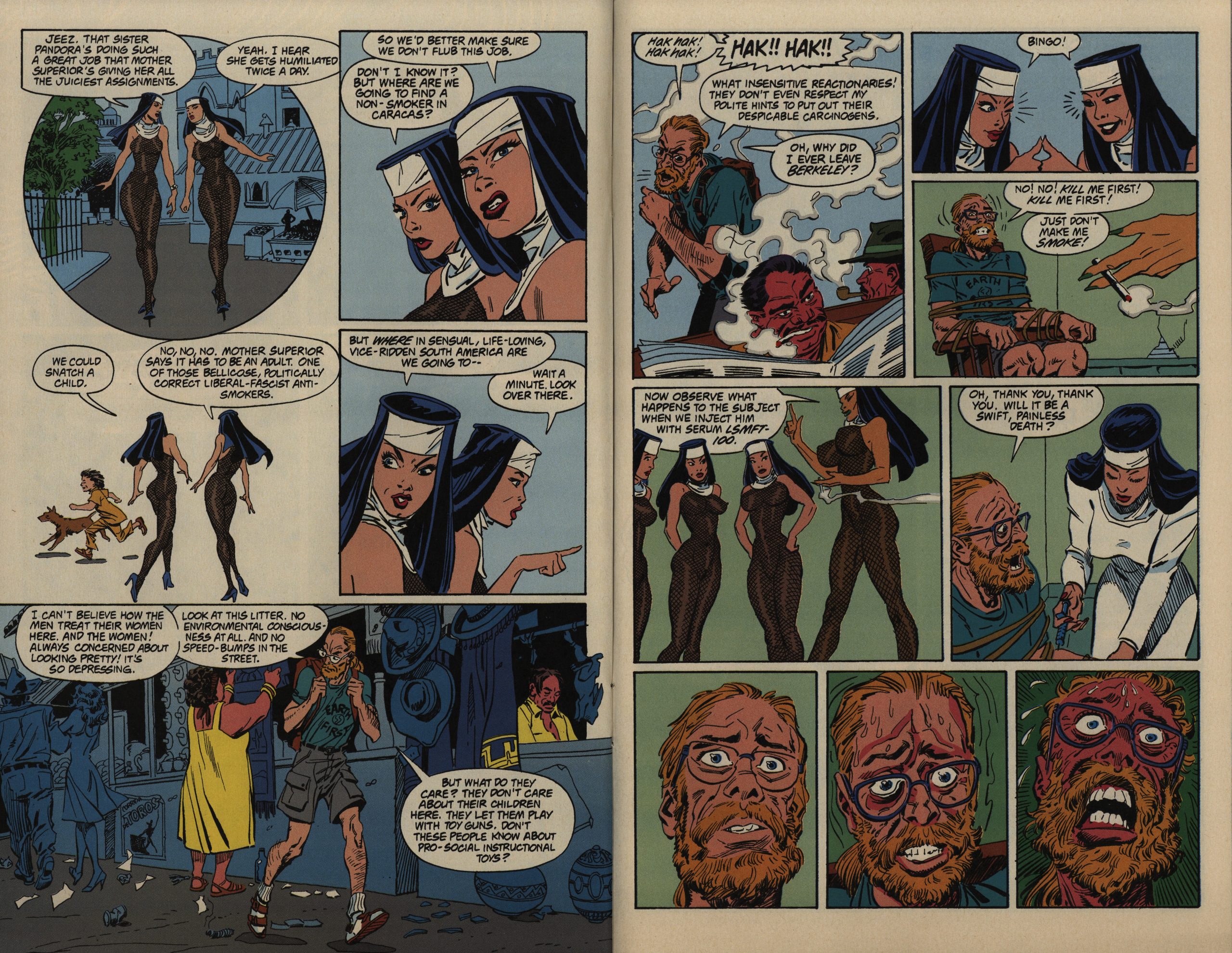 What about this one about a “politically correct liberal-fascist”?

Sometimes humour is difficult to write about, and (as I said) I never do anything difficult.

But I wanted to talk about the artwork. Obviously one of the points here is to put a lot of tits and ass on the pages… and backgrounds have a tendency to go missing altogether. The artwork does have a pretty appealing look to it, though. I still can’t believe this is Al Williamson inking — I can’t tell at all, but he’s a professional, and doesn’t overpower the penciller, I guess.

The storytelling and transitions are effective.

One of the issues has this hilarious blurb on the cover… 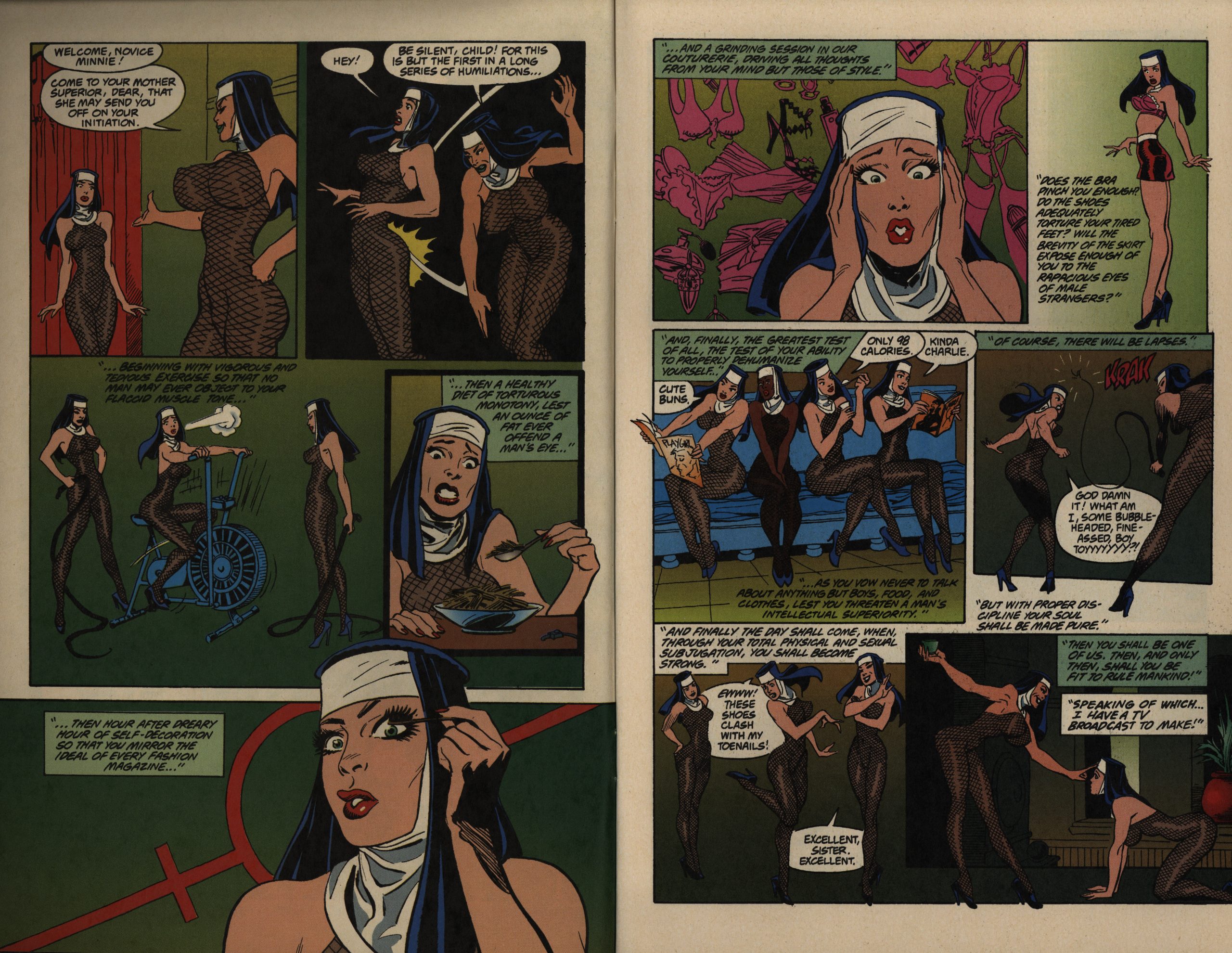 … and then this thing about how women torture themselves just to look hot for men. I can’t tell whether they think this is the edgy part, or whether it’s a kind of meta joke where we’re supposed to think that making fun of this is in itself funny.

Nah. I think it’s probably just another “oh those dames are so stupid” thing? Right? 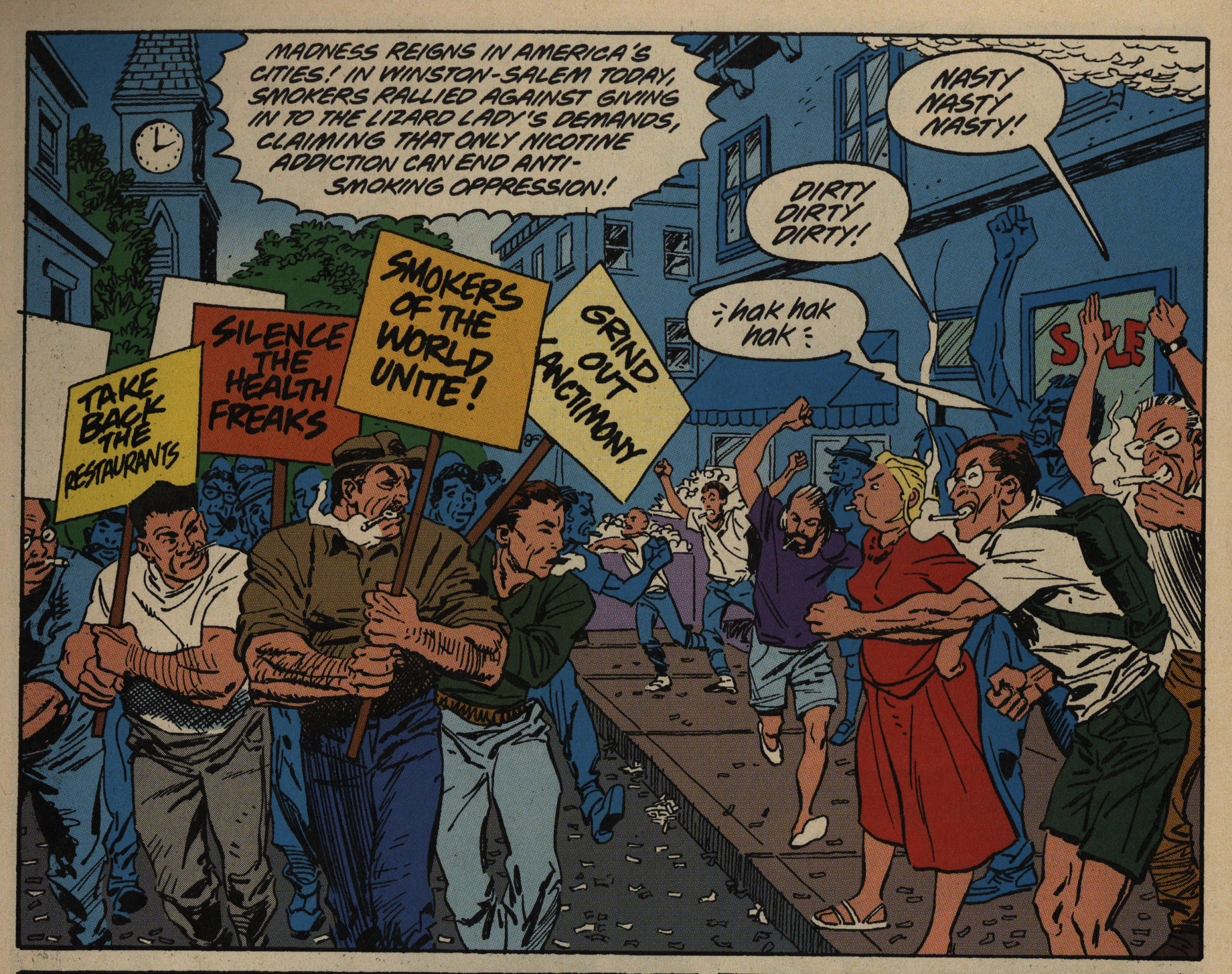 Well, this pro-smoking demonstration is uncannily timely now in May 2020… 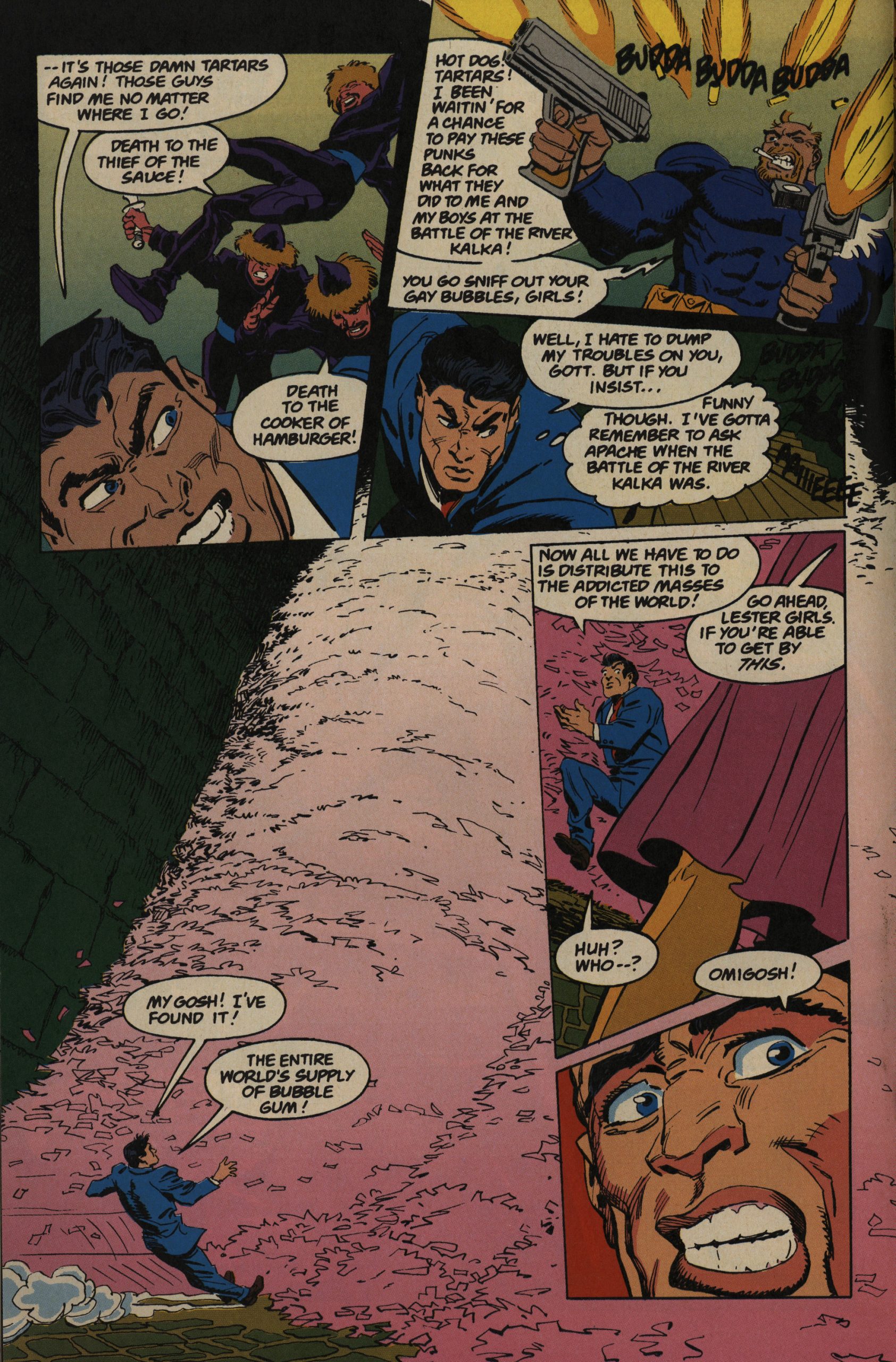 I have a feeling that I’m probably coming off more negative to this book than I really am. It’s pretty amusing, and the artwork is pleasant. The final issue has a nice escalation in the insanity, and the four issues combined have a plot that (if you removed the funny bits) is a lot better than most action movie/comics plots.

It’s pretty good. Even if there are bits that make you go “eh?” 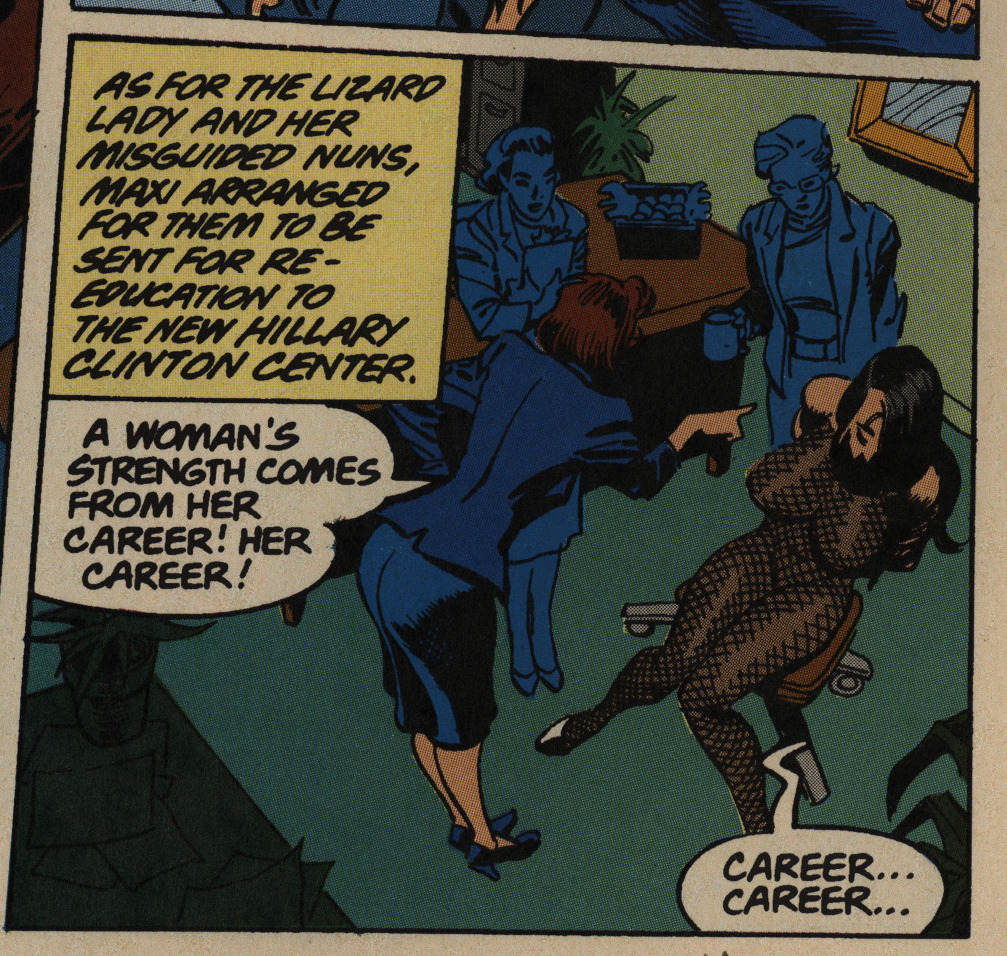 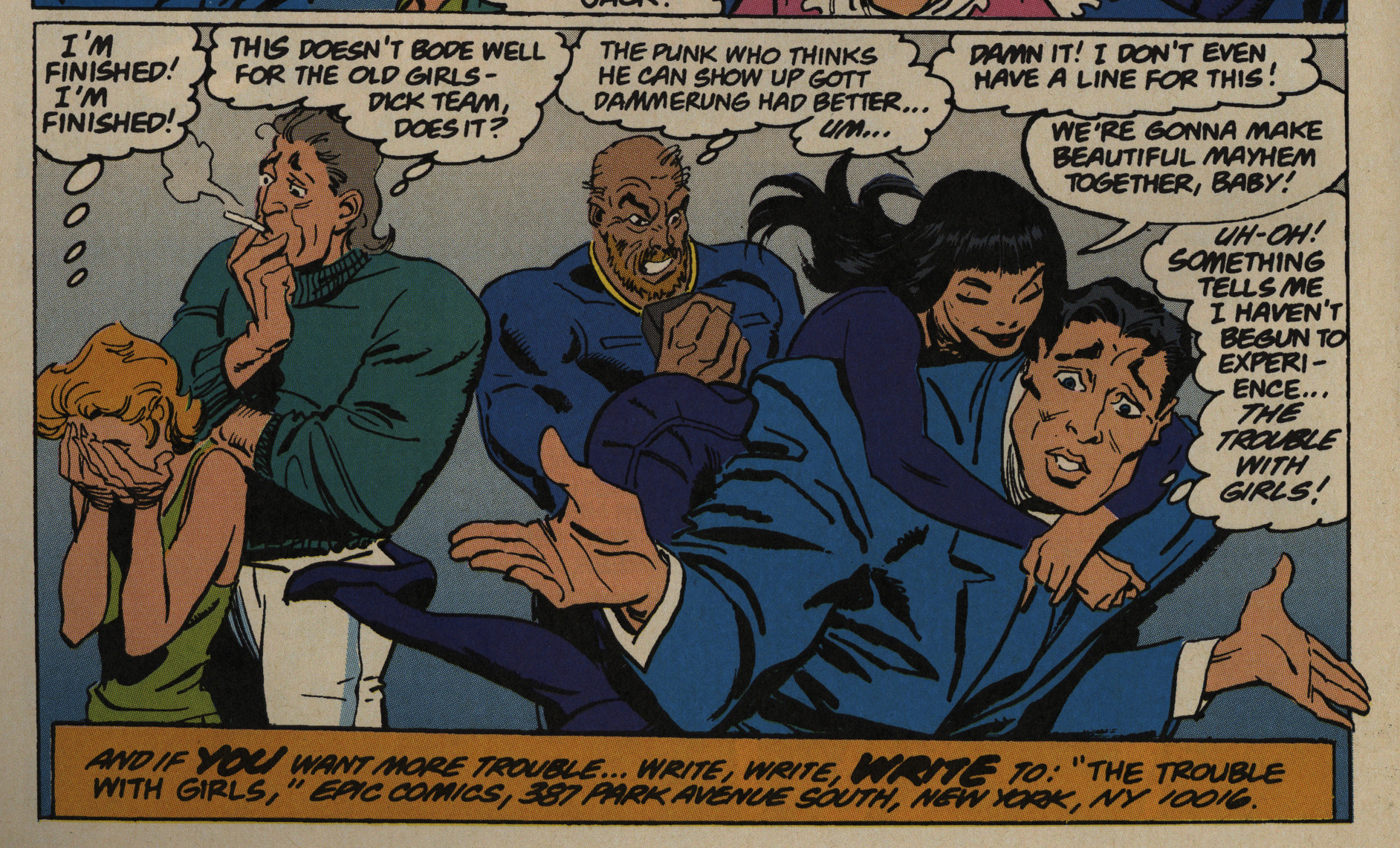 Was this the end of Lester Girls?

The first 14 issues have released in a collected edition, but the rest have never been reprinted, apparently.

I was unable to find any review of this book on the interwebs, but here’s a review of the collection from 2006:

Poor Mr. Girls is the creation of nonfiction authors Jacobs and Jones, a lost gem of late ’80s comics, hence the occasional mullet on view. Rescued from obscurity, the first seven issues of the comic show not only an intelligent James Bond satire but a genuinely endearing hero whose plight, however absurd, we can’t help sympathizing with.