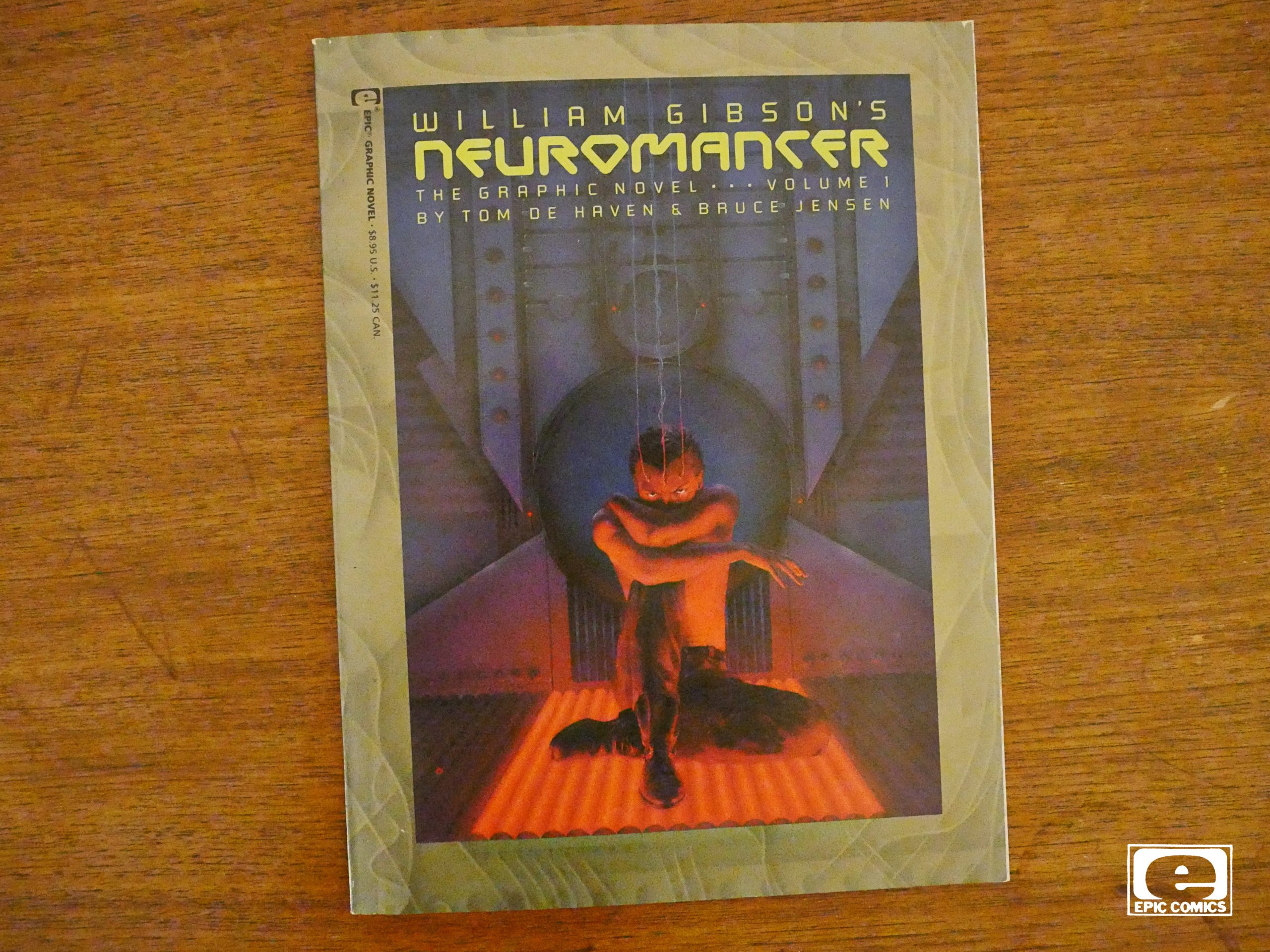 I remember Tom De Haven from Pixie Meat, the comic he did with Gary Panter and others, and also that he was contracted to write a Neon Lit adaptation which never happened. 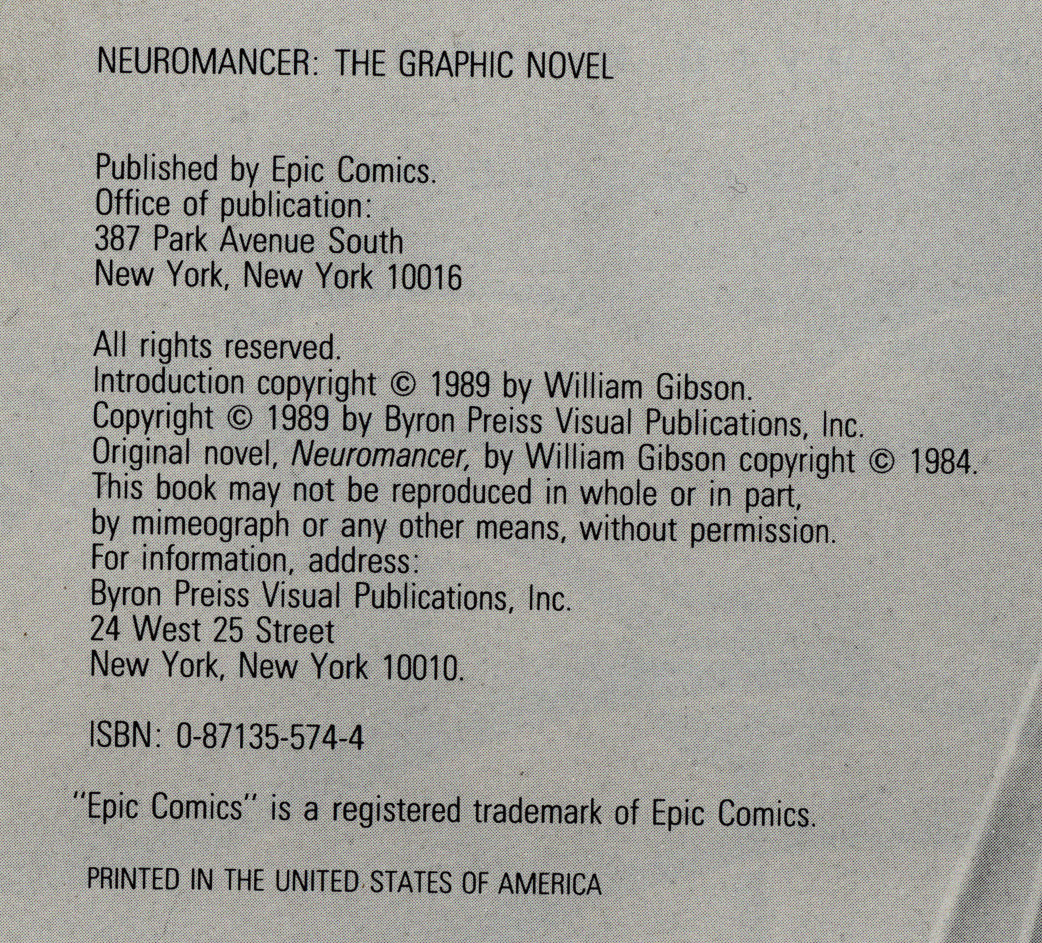 Right; this is something that Byron Preiss set up… 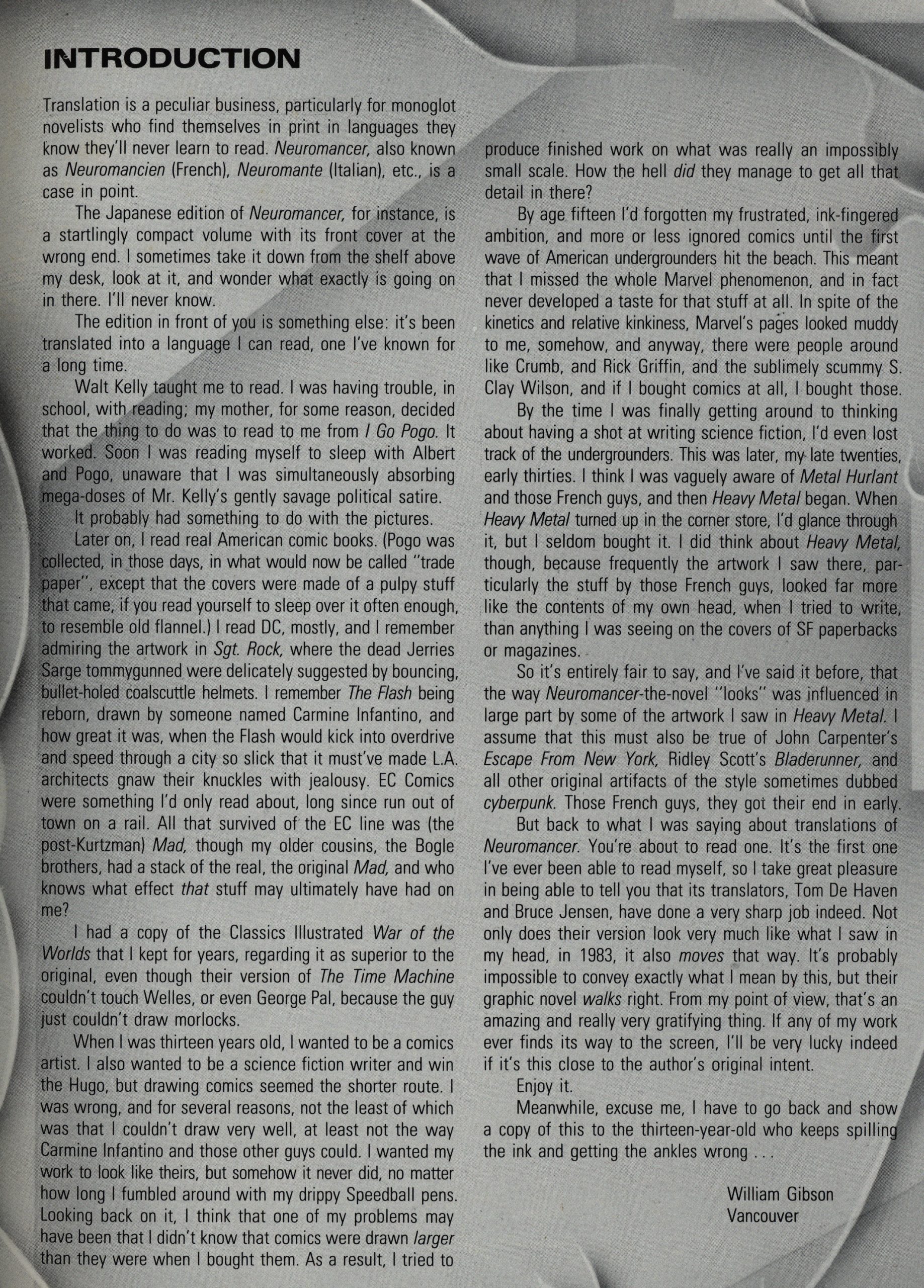 Gibson provides an introduction, and seems to be most interested in convincing everybody that he likes comics. 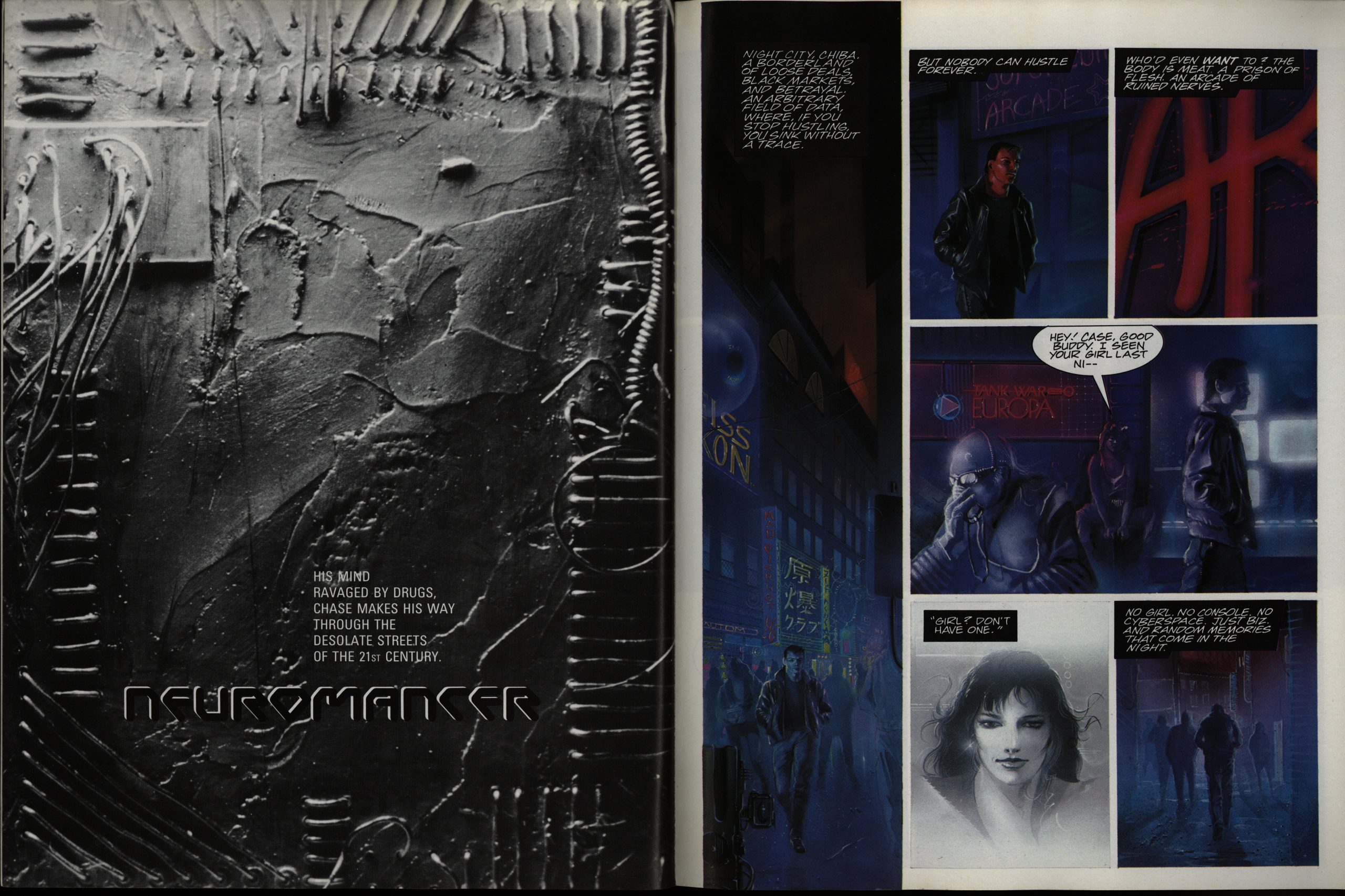 As graphic novels go, this is a pretty slim one (even for its time). It’s got 44 story, but I guess the “volume 1” means that this isn’t a translation of the complete novel. Which I remember being really taken by when I read it as a teenager: It had something really fresh and new about it. 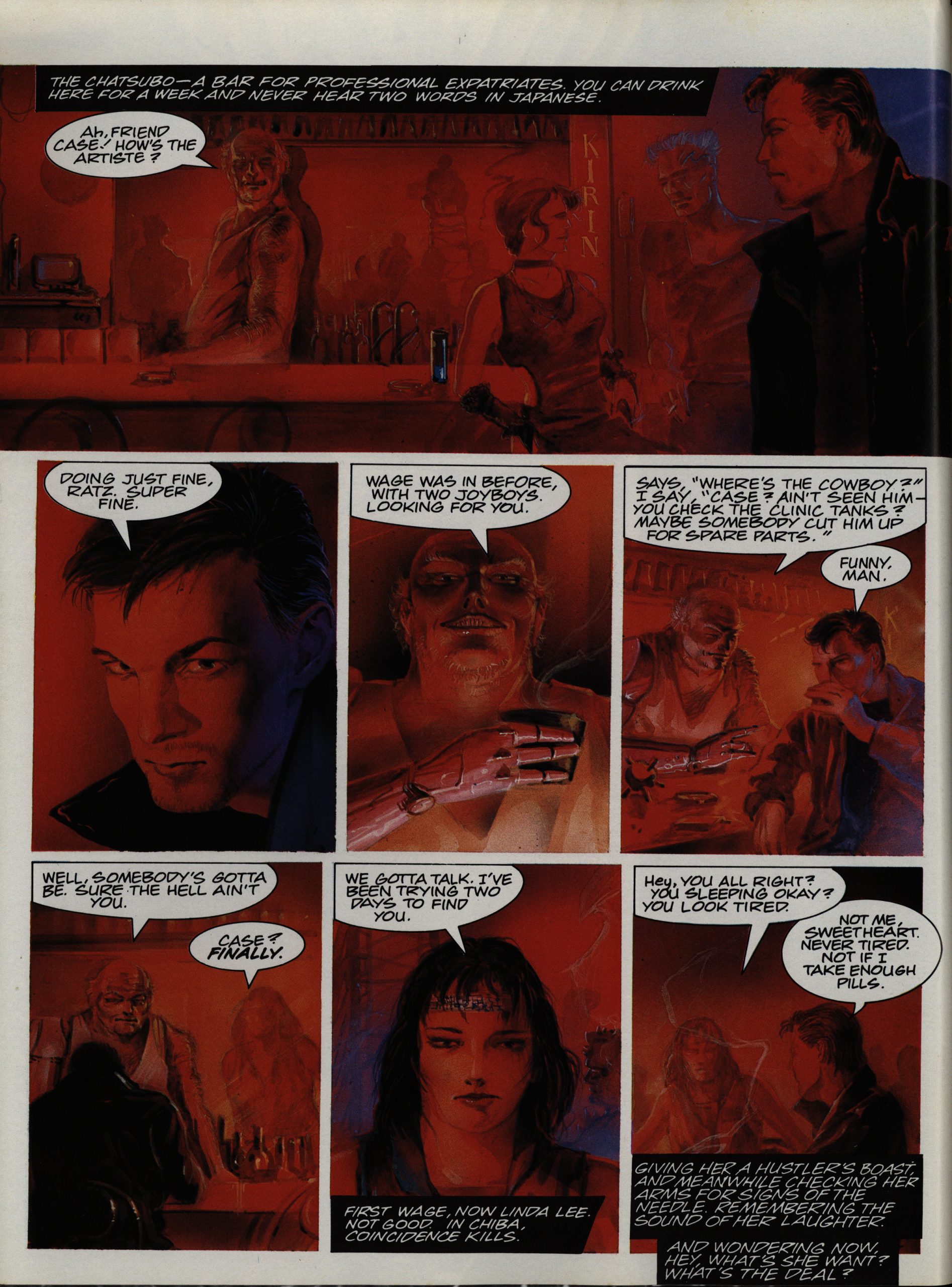 The artist, Bruce Jensen, is totally unknown to me, but from these pages I’m going to go ahead and guess that he doesn’t have that much experience with doing comics. The pages read well and look really striking, but there’s a stiffness (coming from using photo reference for half the characters?) that’s sometimes offputting. 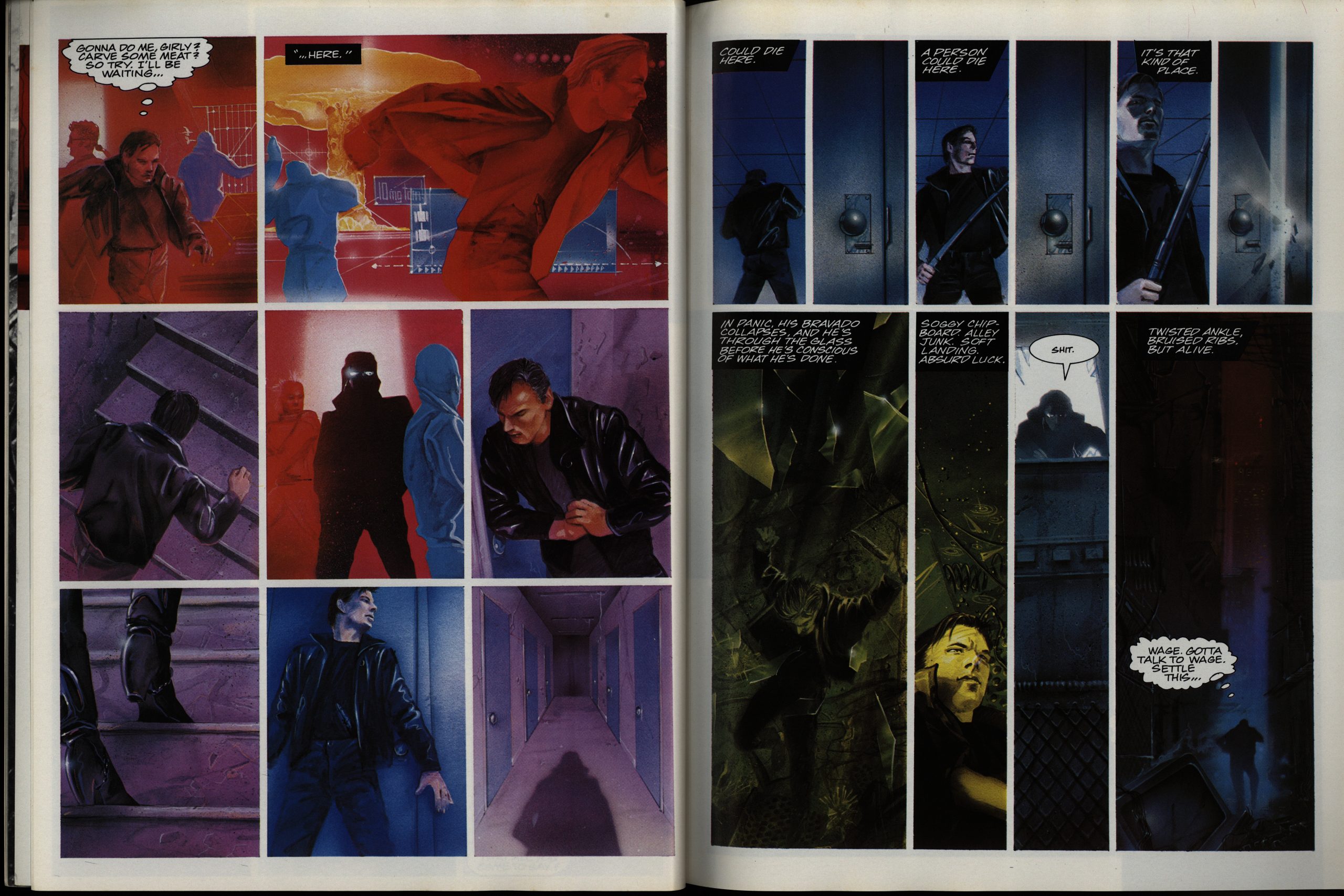 But there’s pages and pages like the ones above: A super-captivating sense of panel design and flow that’s irresistible. I mean… just look at it! It’s not just that it’s striking, but that it pulls you in, like the trick with the alternating panels on the top right there. It’s got rhythm; it’s got tension; it feels just right.

The storytelling does perhaps feel a bit old-fashioned: After 1985 using an omniscient narrator was just so last week, man. But it really fits this story, which is, after all, something of a throwback to 40s Noir. And besides, it’s somewhere halfway between omniscient and personal narration, leading to a greater sense of fun.

All that said, and reading this was indeed an unexpected thrill: There are bits where I feel perhaps a smidgen more elucidation about what’s going on would be nice. I love reading works where you feel there’s a depth about the world you’re reading about, and not every little detail is explained, but I think De Haven sometimes errs on the side of obscurity. 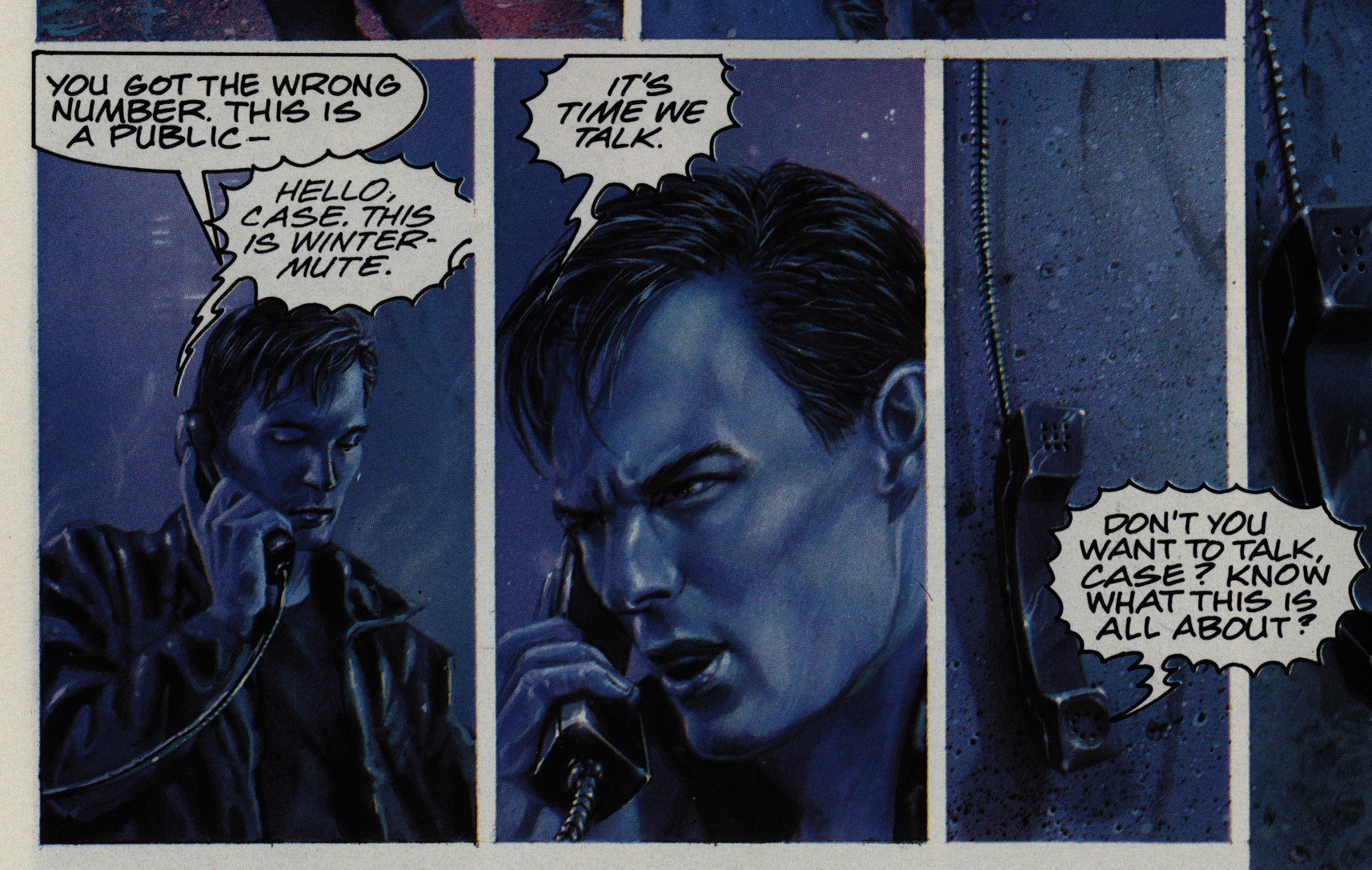 And then it… I won’t say “ends”, but we run out of pages and the story stops.

There is a climax of sorts; it’s basically a caper story, and they do the caper and it’s very exciting, so it’s not as disappointing as it could be that this is the only volume. Because it is: I’ve found no explanation for why this was cancelled, so I’m assuming it was because it just didn’t sell.

And it’s never been reprinted… because it’s only the first third of the novel. You can read the entire thing here, though.

I loved it, but what did the critics think?

Byron Preiss doesn’t put together
graphic nwels; he puts together deals.
The comics come second, the pay-off
comes bottom line. At least what
his track record suggests, as well as
his latest entry into the graphic mar-
ketplace
In cahoots with Epic for this major
project, Preiss has once again shown
his true colors by publishing a so-so
version of a science fiction classic.

The graphic noel adaptation of
Neuromancer leaves much to be de-
sired. Though the package sports a
flashy Alex Jay design, the insides
lmk like a kidnappd from the
Heavy Metal slush pile.
Artist Bruce Jensen, who painted
the bk. has his piece of artwork
stuck on the cover. Aside from a few
interesting skylines and curious back-
grounds, Jensen does not know how
to paint. His chancers are and
stiff, there is an air of amateurish-
ness about the entire story. The look
and feel of the book is fanbw, not
frture. Scot Hampton, Jon Muth, and
Kent Williams have nothing to fear.
Credit, hmvever, must be given to
writer Tom De Haven’s try at adapting
Gibson’s visual and poetic prose. De
Haven’s job was to smash about one-
third of a 90,0-word novel into 44
pages of comic. De Haven seems like
he is sincerely trying to get the feel
of Gibson’s book across instead of
every nuance of plot and action. With
more pages and a capable art team,
he could have more than
Also, if someone other than Preiss
managed to get the rights to the thing
first, it would have been much better.
Preiss’ oWious integrity is evident on
the fourth page: a photo illo of a cir-
cuit board sports the book’s logo and
identifies the protagonist of the story
as “Chase.”
His name is “Case.” The book has
a typo on its big, bad intro page.

Byron Preiss Visual Publica-
tions, of which this adaptation Of
Neuromancer is One, began with the
premise that books could reach a wider
audience if they were more like com-
ics, and comics could reach a wider au-
dience if they were less like comics. Out
of this thinking came an awkward
hybrid that never caught On with any-
One. Sometimes a Preiss production
read like a Big Little Book, sometimes
like an overwritten comic, but never
would it threaten the sort of break-
through Preiss was looking for. Even-
tually he gave these up, but
though Neuromancer is a conventional
comic book, it still displays many of the
Preiss sins.

Novelist Tom
DeHaven contributes a servicable adap-
tation, though it descends into cliche
with depressing regularity. The weight
Of bringing Neuromancer to life falls
squarely on the shoulders Of Bruce
Jensen, who promptly collapses under
the weight. The characters have ab-
solutely no personality, and give no
sense of movement. For the most part
they look like television cop show
punks. The backgrounds are mlsty and
vague, giving no sense of the cultur the
characters live in while defeating imag-
ination through their literalism. It is the
work Of an uninspired illustrator, not a
cartoonist. It could conceivably be of
some use as a synopsis for those who
have a hard time figuring out what is
going on in the book.