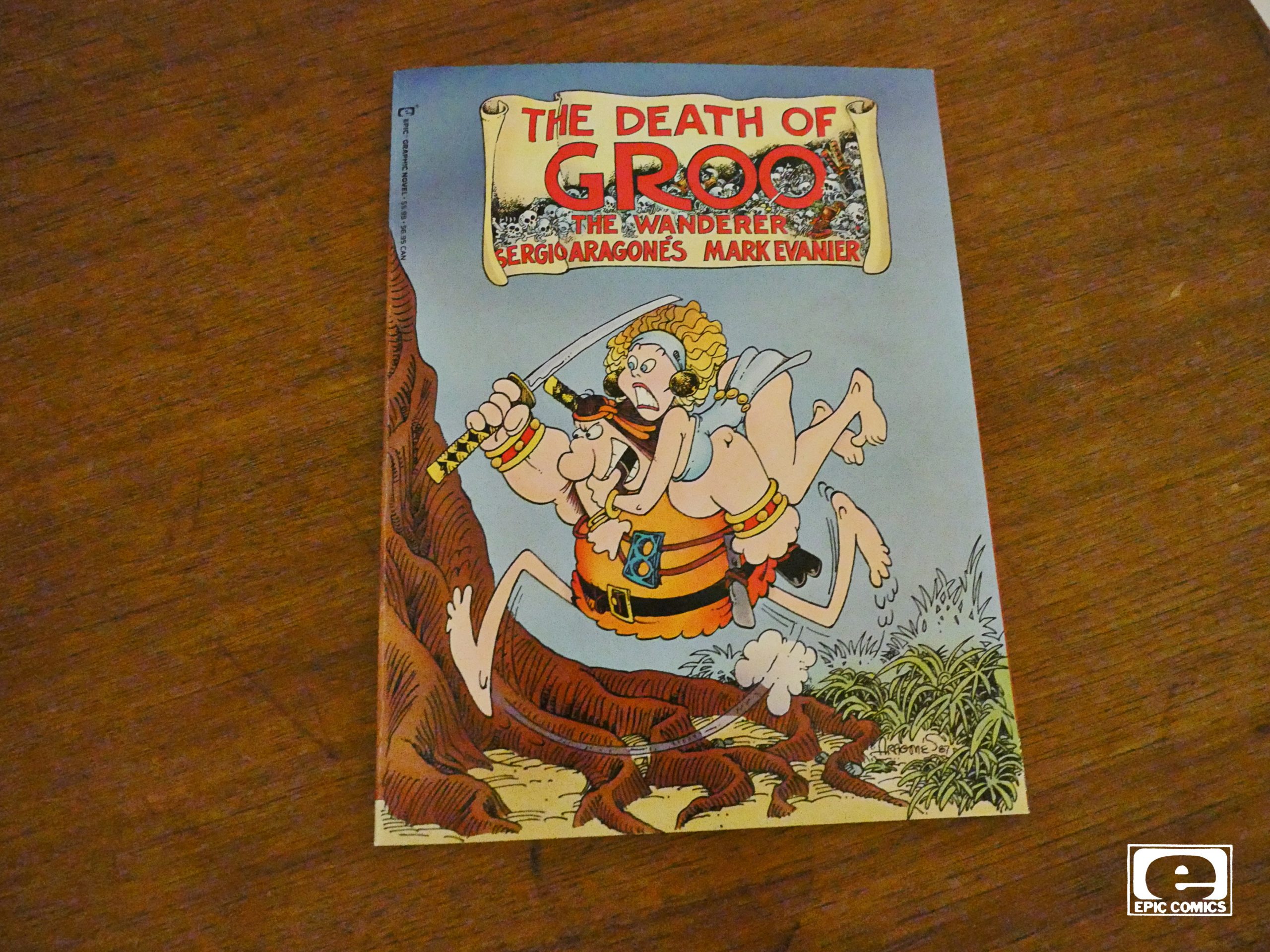 I’ve read very little Groo before, and I meant to read the entire Epic Comics Groo… but the person I bought the 120 issues at Ebay disappeared.

I’ve now re-bought them, and the collection is slowly wending its way to me: I guess they’ll be here next week, and then it should only take me three three weeks to read them. 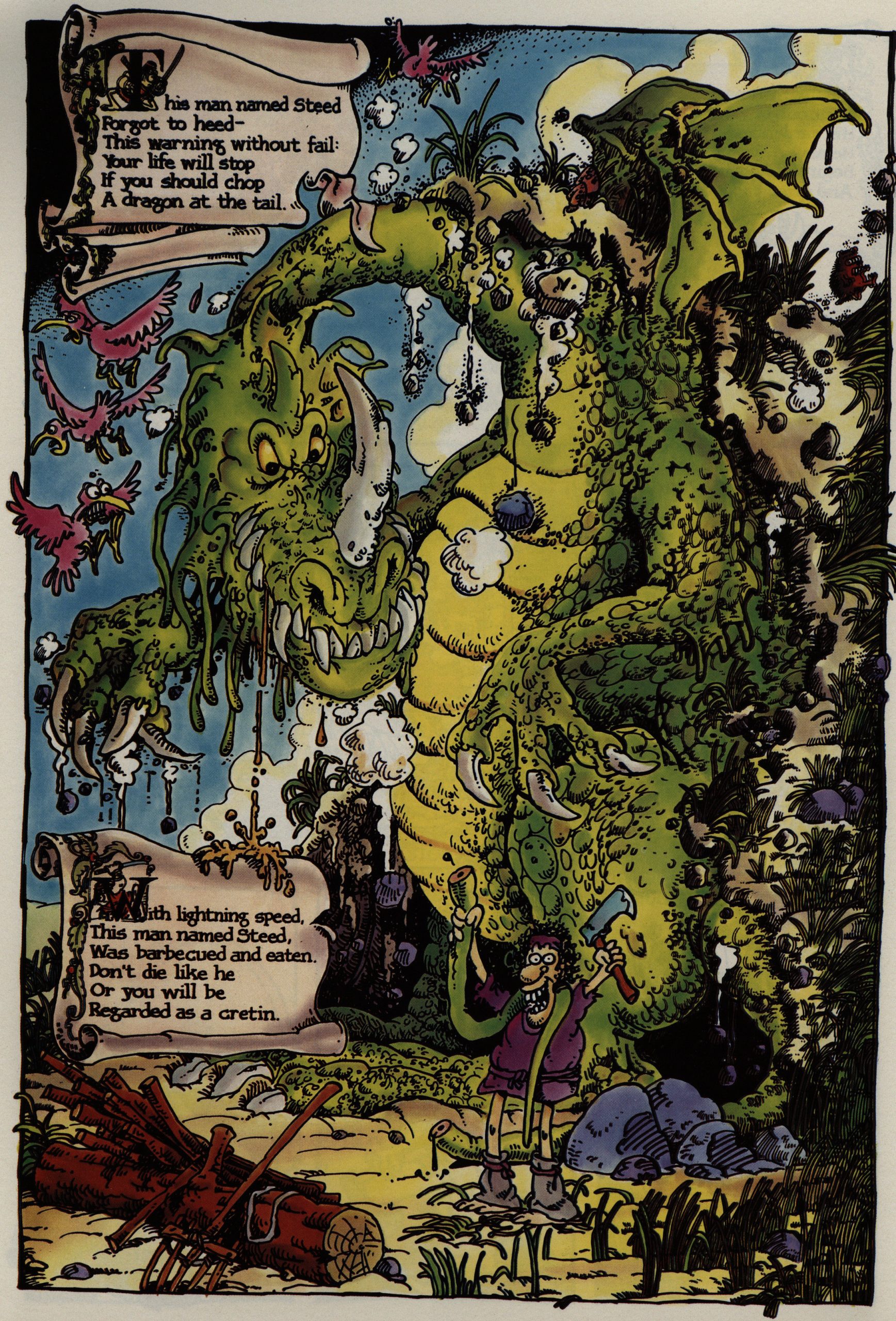 The first album (the Death one) is printed pretty badly: The inks look smudged, and the colouring looks kinda too heavy? But, man, Aragones is really going to town on the artwork here. All these itsy bitsy noodles all over the place, and instead of making things look messy, everything looks unexpectedly beautiful in a strange way.

If this is what I have in store for me reading the regular comic book, I’m getting rather excited: I thought the book would be totally one note: Groo stumbling into a place, destroying it wilfully or not, and then it’s over. But this isn’t quite like that: It’s got all these other fun characters; just as absurd, but in unique ways. 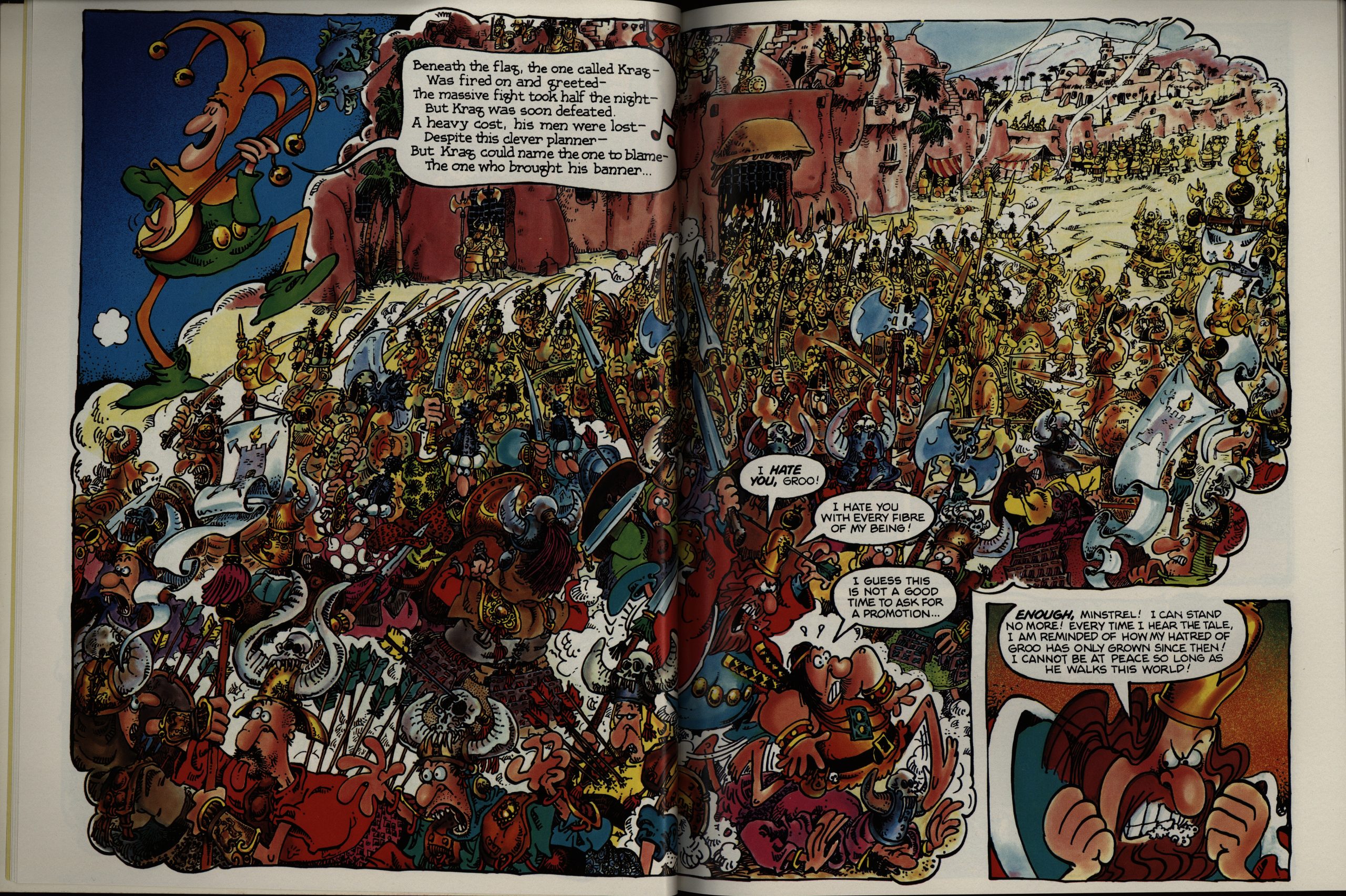 The minstrel bit I didn’t quite take to, but, the artwork. Dude. 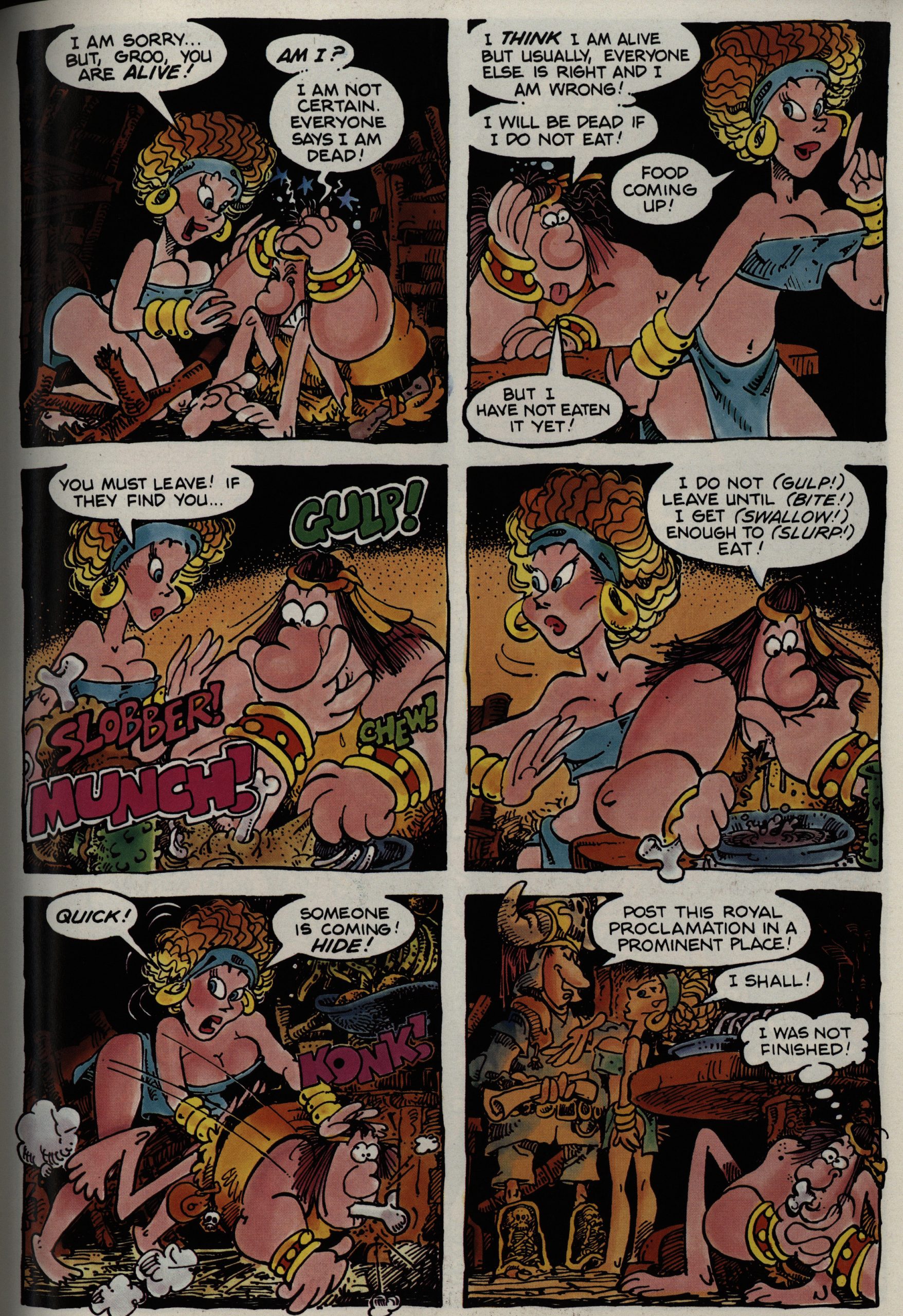 The book does fail the Bechdel test, but there’s two women with speaking parts! (And… other… parts…)

And I’m impressed with the ease Evanier does the stupid lines; it has a most pleasant cumulative effect. So if this is what’s in store for me in the regular series, I’m not as scared as I was before at tackling that half-a-shortbox. 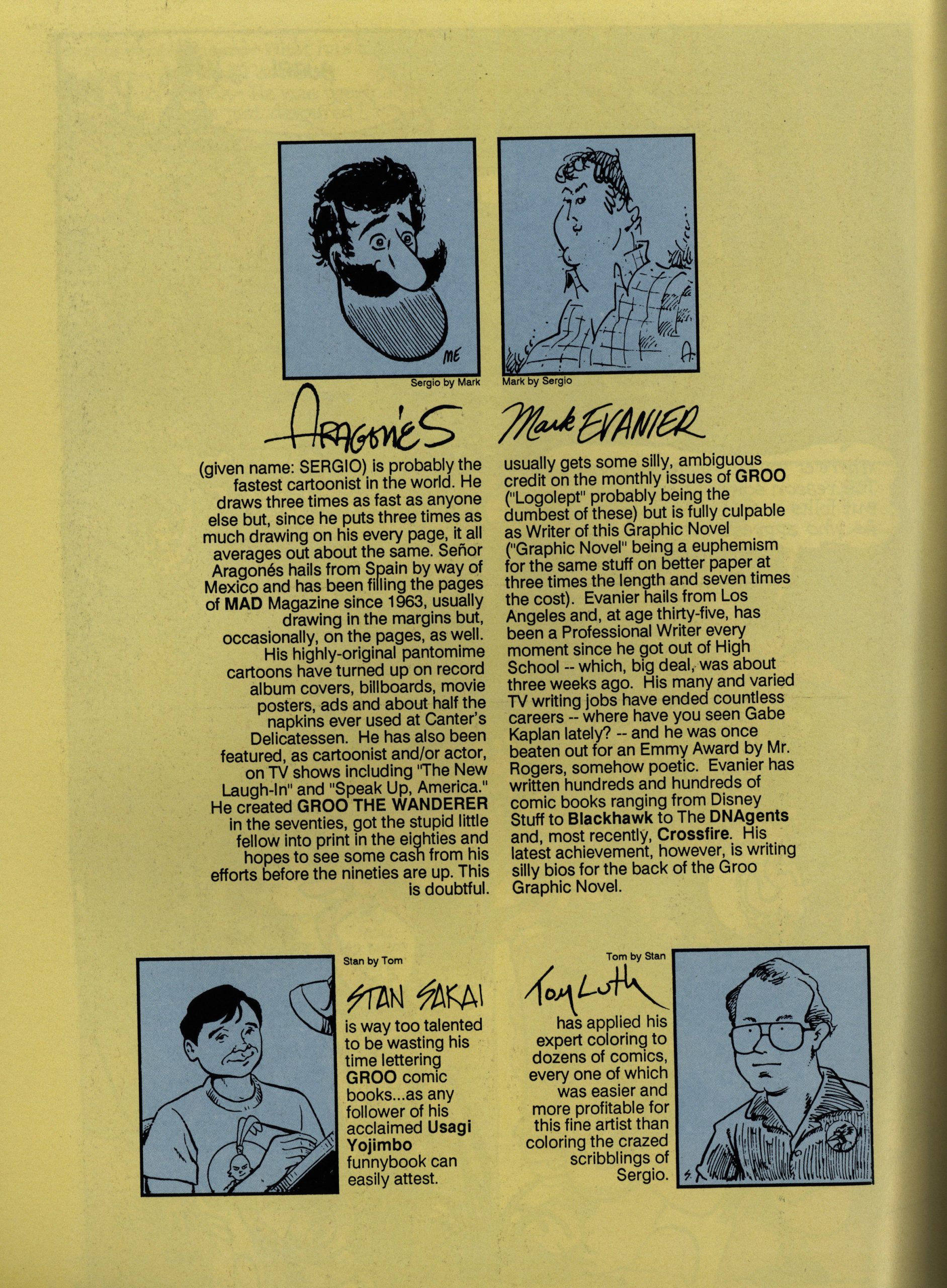 Hey! A Stan Sakai self portrait… as a human bean! I don’t think I’ve seen that before. 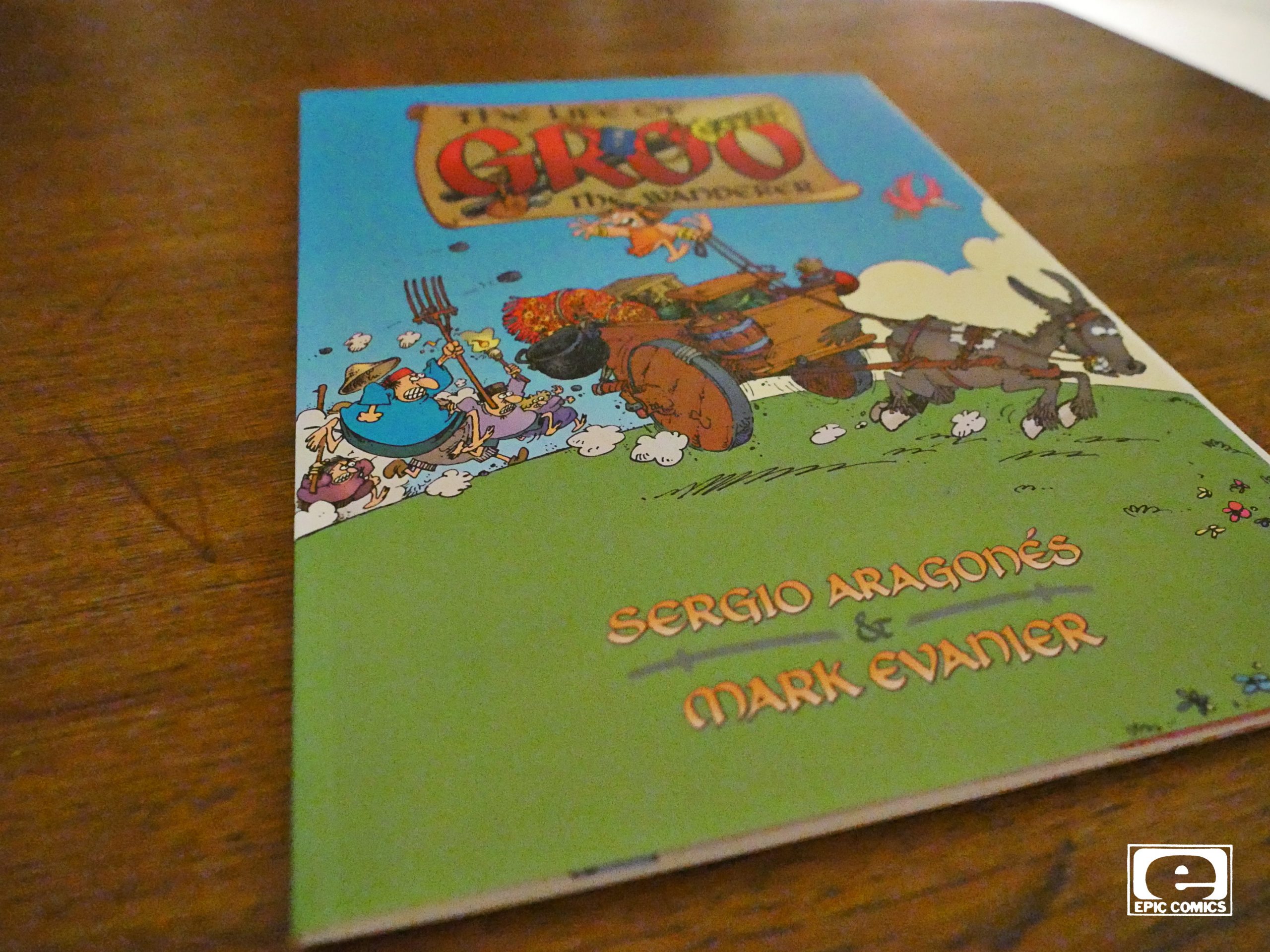 Then there’s the Life of Groo, and I seem to have bought the Graffiti Editions er edition of the book instead of the Epic version. 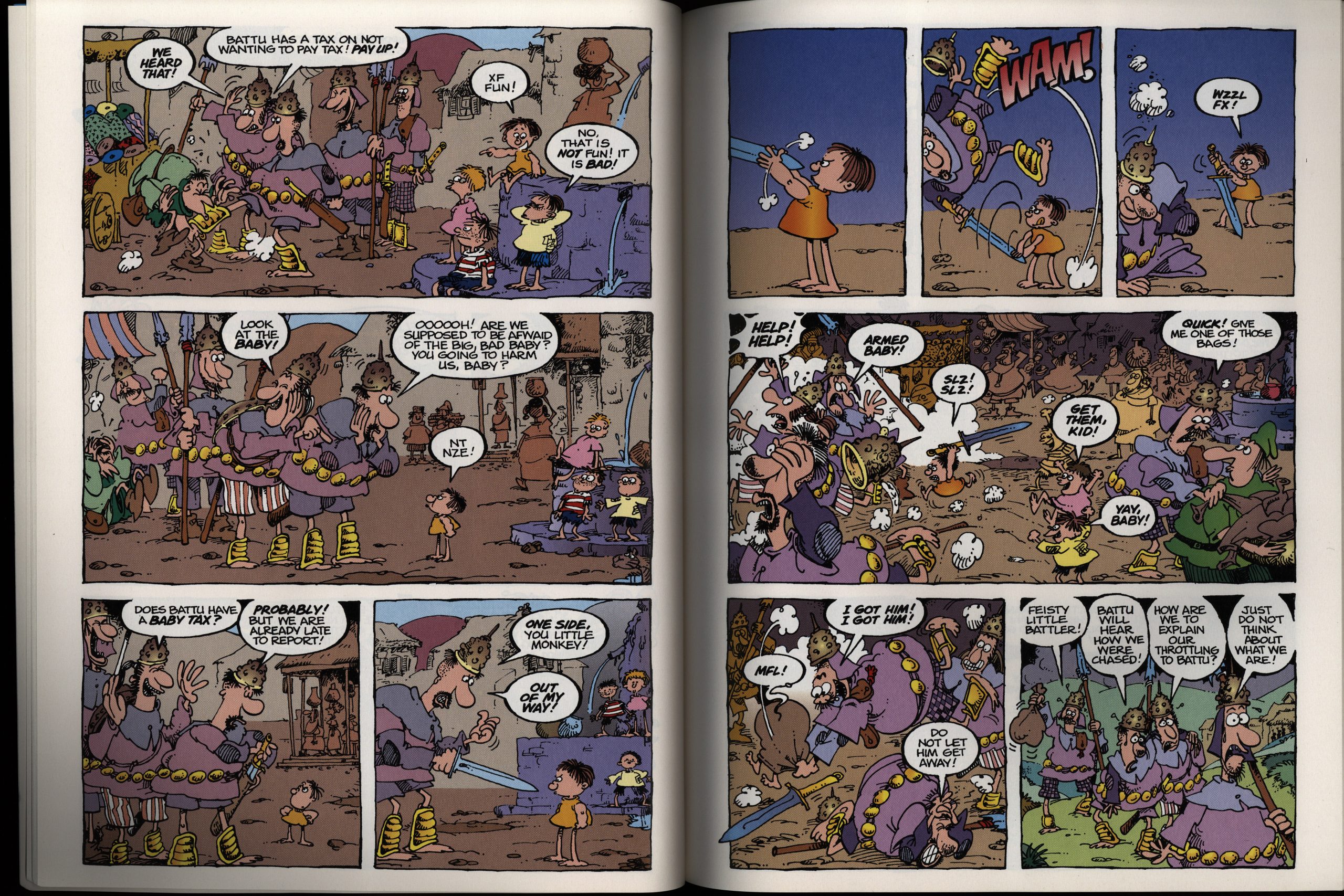 But… otherwise this is everything I feared Groo would be. It has no structure: It’s basically that scene up there again and again and again, and we’re supposed to find Groo’s amazing prowess with the sword just amazingly funny. It isn’t.

Aragones’ artwork is still good, but the sheer exuberance on display in Death is gone here. There are no scenes that make you go “wow”. I mean, uninspired Aragones is still better than most things, but it’s a letdown. 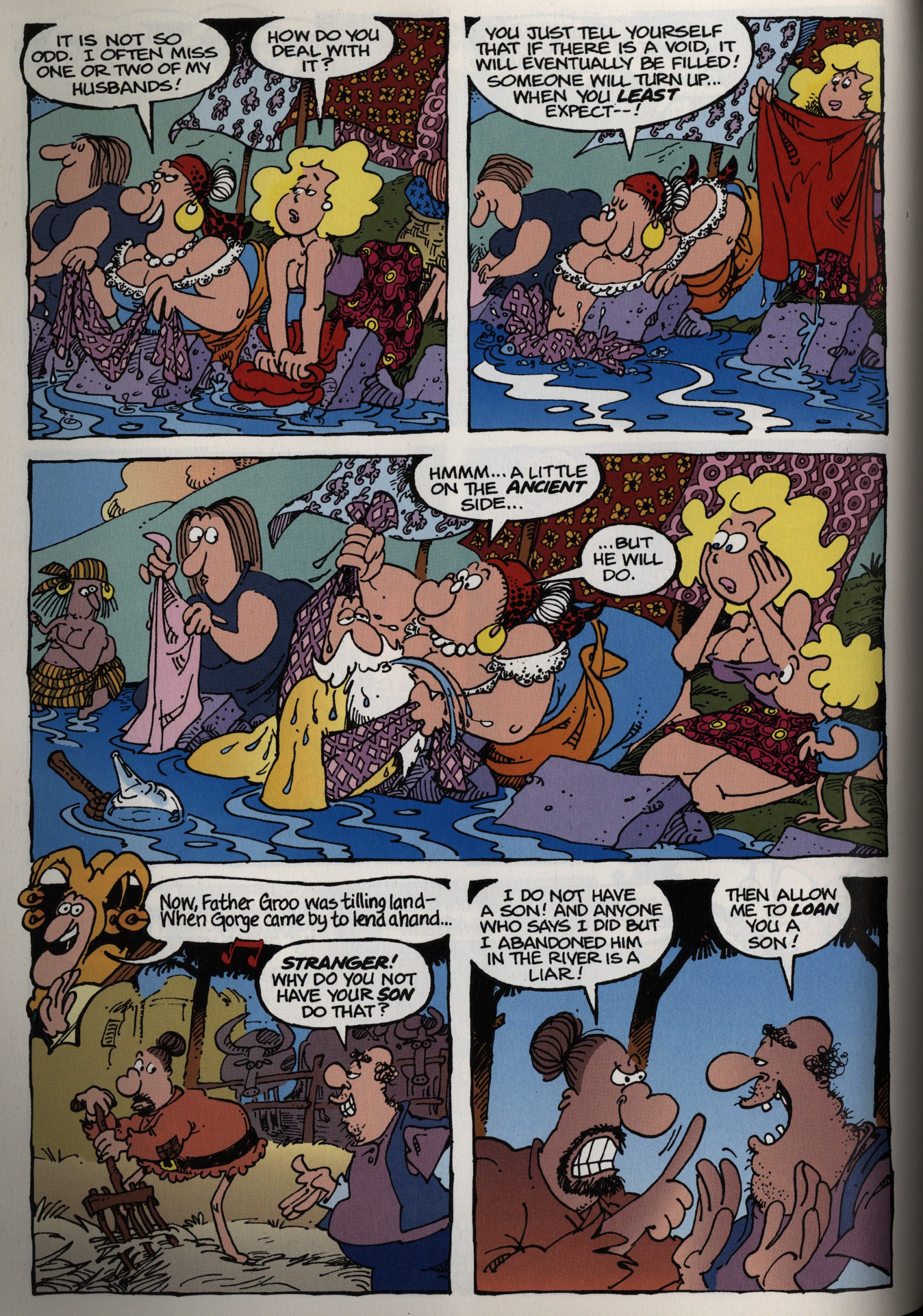 The jokes have the unfortunate whiff of sitcom rhythms. (To mix a metaphor or two.) 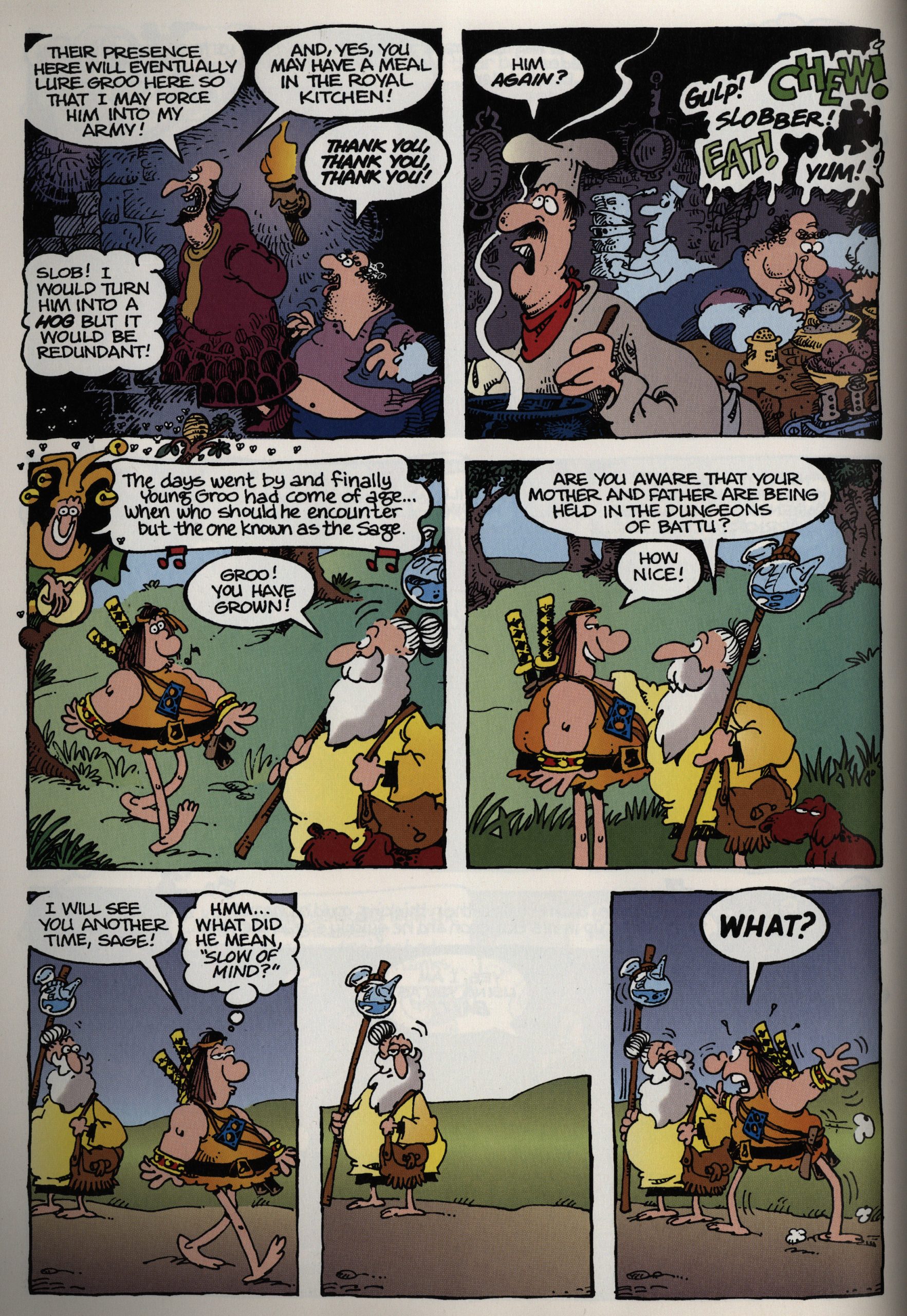 This is the most advanced one: The last time Groo saw the Sage was decades ago, and it’s a callback to a scene many pages ago, so the “slow of mind” thing does double duty, and that’s fun.

But that’s as funny as it gets.

AH: What’s the story on the Groo
graphic novel?
ARAGONFS: That was written
completely by Mark. ‘Ihis is the tirst
time I’m drawing something I
haven’t written, so it’s a lot of fun
in that sense. the first pages and
I was cracking up. really funny. It’s
called The Death of Groo, and he
thinks he’s dead, so he’s really wor-
ried. That’s taking an awful lot of
work, because it makes you con-
scious that it is going to be on a finer
grade of paper.

Ah, so Death of Groo was written by Evanier… Hm…

An edition collecting both albums has been published.

I was unable to find any reviews written around that time, but here’s a more recent one:

Because this is Groo the overall standards are high, but it doesn’t approach the most inventive stories from the regular series.

This album sized companion volume to The Death of Groo is a more successful project all round.

So the opposite opinion of what I had.