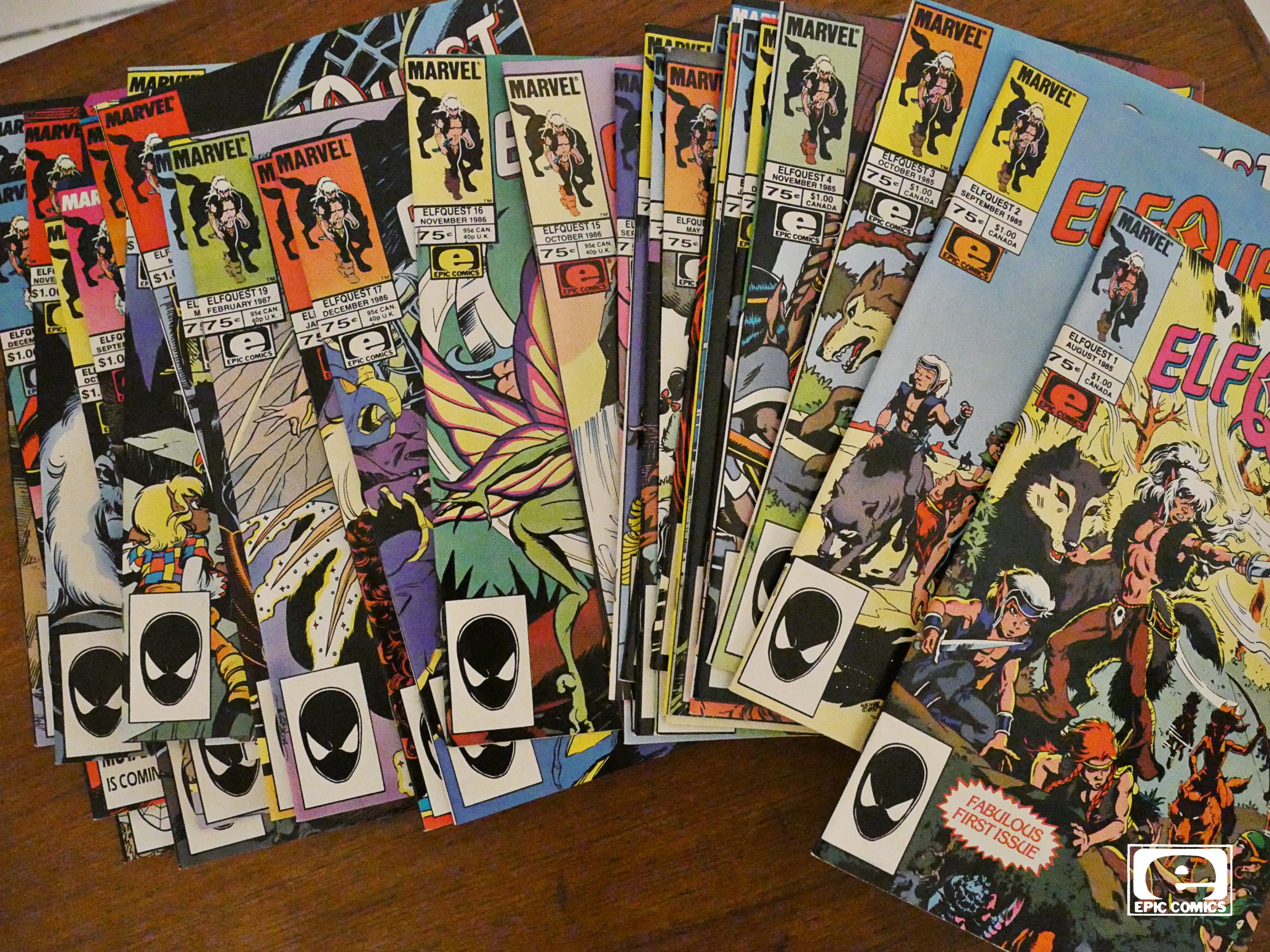 My Elfquest reading history is somewhat wonky. I started reading the original Warp series around issue 11, and I never managed (or tried very hard) to pick up the preceding issues. But I did buy a few of the Starblaze colour albums that collected the series, so I’ve probably read… like… most of this? But out of order and somewhat confused.

I’m not quite sure why this was. I really loved Pini’s artwork, and even had some of per prints on my wall. (I was… twelve?)

But it just never happened, and I did not pick up the Epic reprint, either, because it’s on crappy newsprint. But I got it from Ebay now, so I’m finally, after all these years, going to read the entire quest. Just took me forty years.

Epic was set up by Marvel as a way to make some money off of the direct sales comic stores (by allowing creators to retain the rights to their works). So the Epic comics were more expensive, had good printing, and nice paper. I guess they then thought that they could use the same setup to do newsstand distribution, which they did with Groo, Elfquest and the short-lived Dreadstar reprint series.

Groo ran for 120 issues and Elfquest for 32 (i.e., the entire quest), so I guess this worked out well for everybody involved.

That’s a thankless job to have. 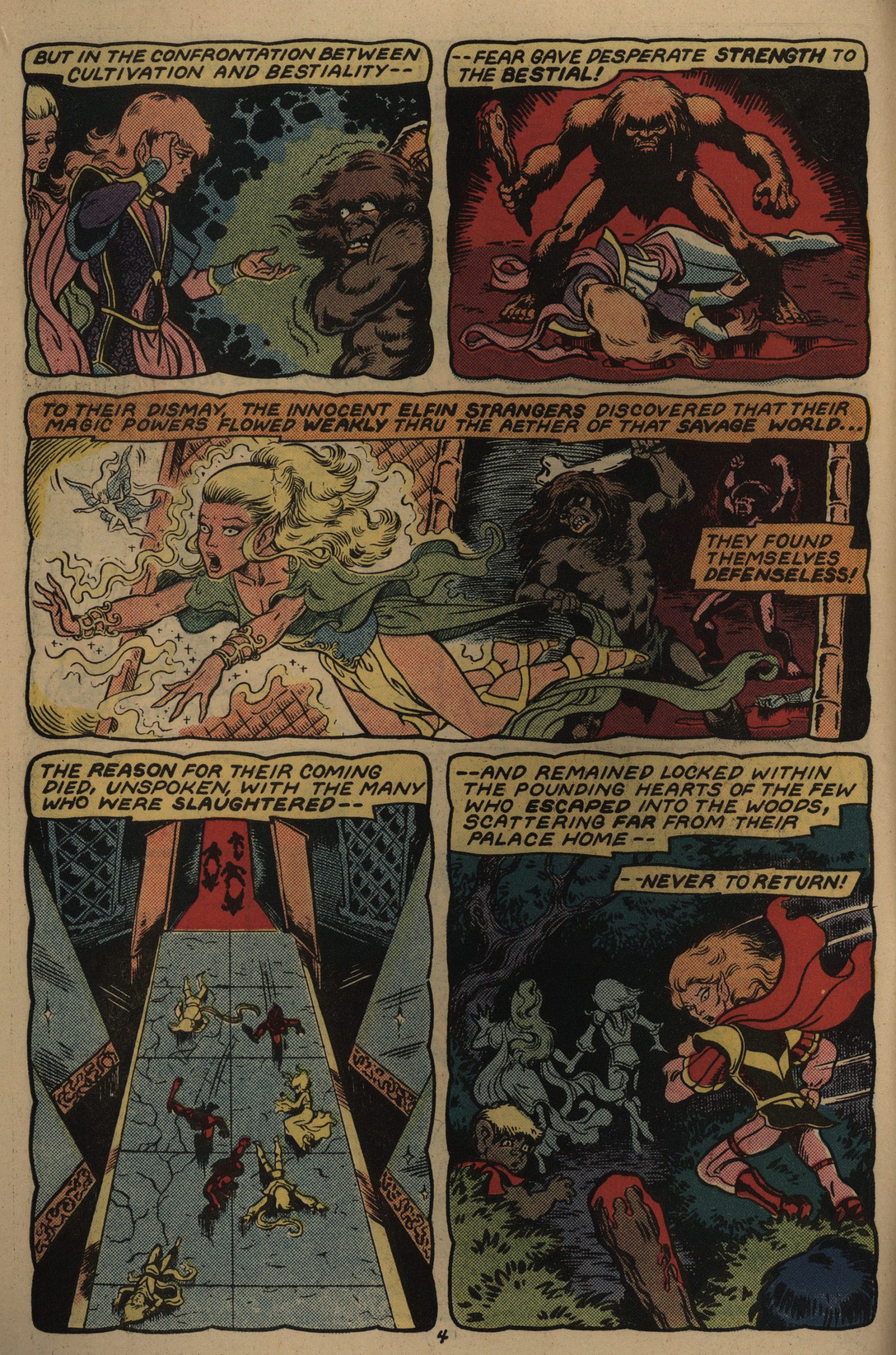 I had totally blanked on how old-fashioned Elfquest was. It starts off with an infodump on how elves came to Earth, and the narration is as dull as you’d expect.

But OK, I’m not actually going to talk that much about Elfquest itself in this blog post, because that’d be boring: Anybody’s that interested in Elfquest (except me) has already read it multiple times in multiple formats and already written blog posts about it, so that’d be a waste of time. But let’s just look at this specific edition. Hey! I don’t remember that bunny from the original series! I guess Pini feels free to introduce new characters in this edition. 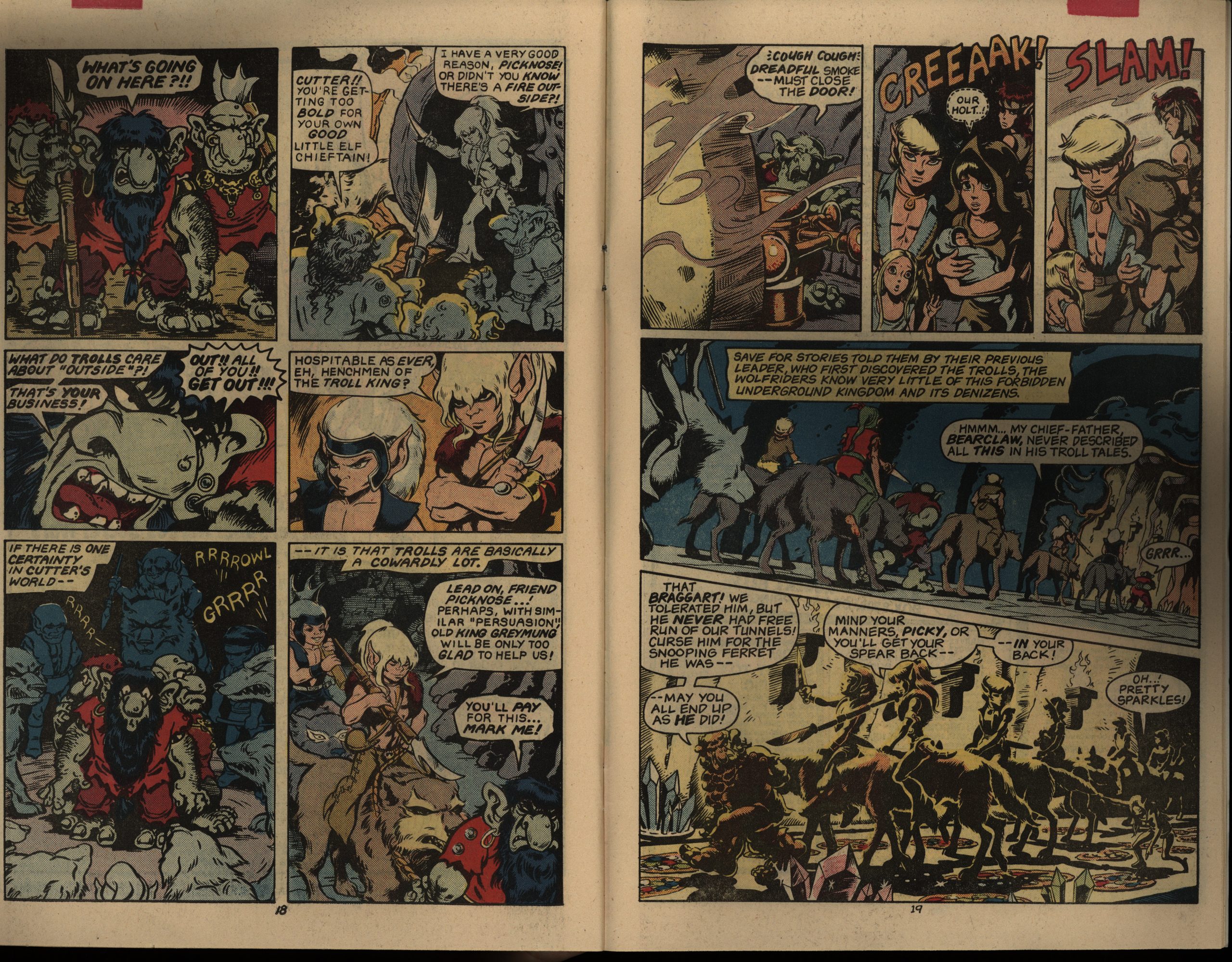 There’s more slapstick here than I remember from the Starblaze editions, but according to a letter in a subsequent issue, these are new pages for this edition. Richard Pini says that there’s zero to five new pages per issue, depending on how they need to pad it out or add pages to explain what’s going on. The original series ran for 20 issues of about 32 pages each, and the Epic edition is 32 issues of, yes you guessed it, about.. 22 pages each.

The new pages are drawn in a style that’d decidedly easier to colour than the old pages, and it becomes somewhat jarring as Pini’s artwork got more and more ornate as the original series progressed. But it works fine in the original issues, when her artwork was more basic. 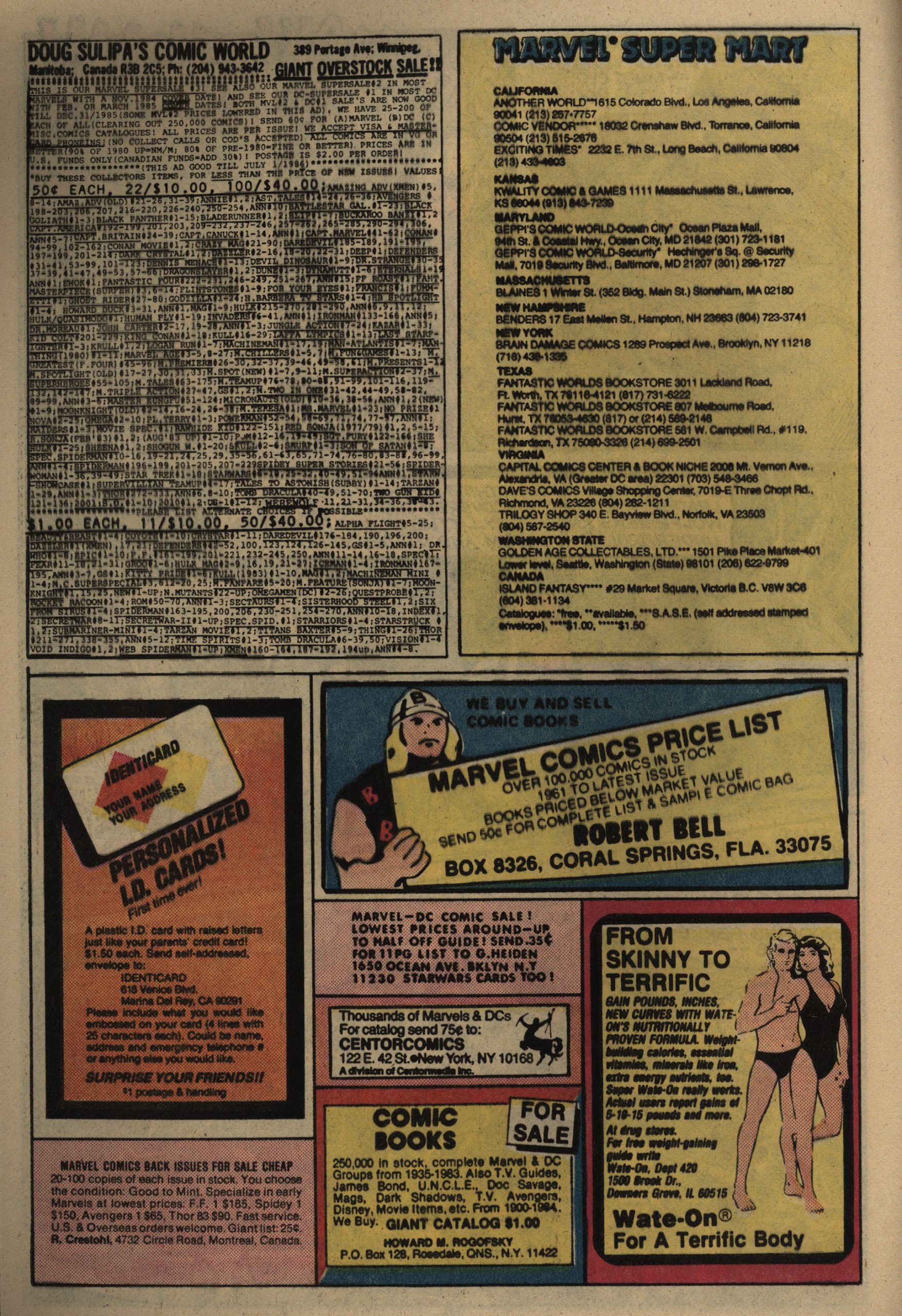 I had completely forgotten about these hodge-podge ad pages… Richard Pini provides an introduction, and he explains why Elfquest is so popular: The story, and the characters in it. It’s not Wendy Pini’s artwork; noooo, surely nobody cares about that. (Is there an eyeroll sprain emoji by now?) I remember Dave Sim once writing an article about how there’s no Richard Pini fans, and the way he’s always in the credits, almost as prominent as Wendy Pini, is deeply embarrassing. Hey! Mile High Comics! It’s where I used to buy all my comics from back then. Well, and I still do that, really. They’re good people, and the only mail-order comics retailer from that era that still exists, I think?

What makes Elfquest compelling is Pini’s artwork, of course, but she doesn’t quite have the little guys’ physiognomy figured out at the start. In some of these poses she seems to just continue extending the stomach all the way down to where the hips should be? I know, these aren’t humans, but… you know… Whut! A Captain America Broadway show? That ad just shouts stranger danger, but Lynda Watson was apparently a thing… But I don’t think the show happened. 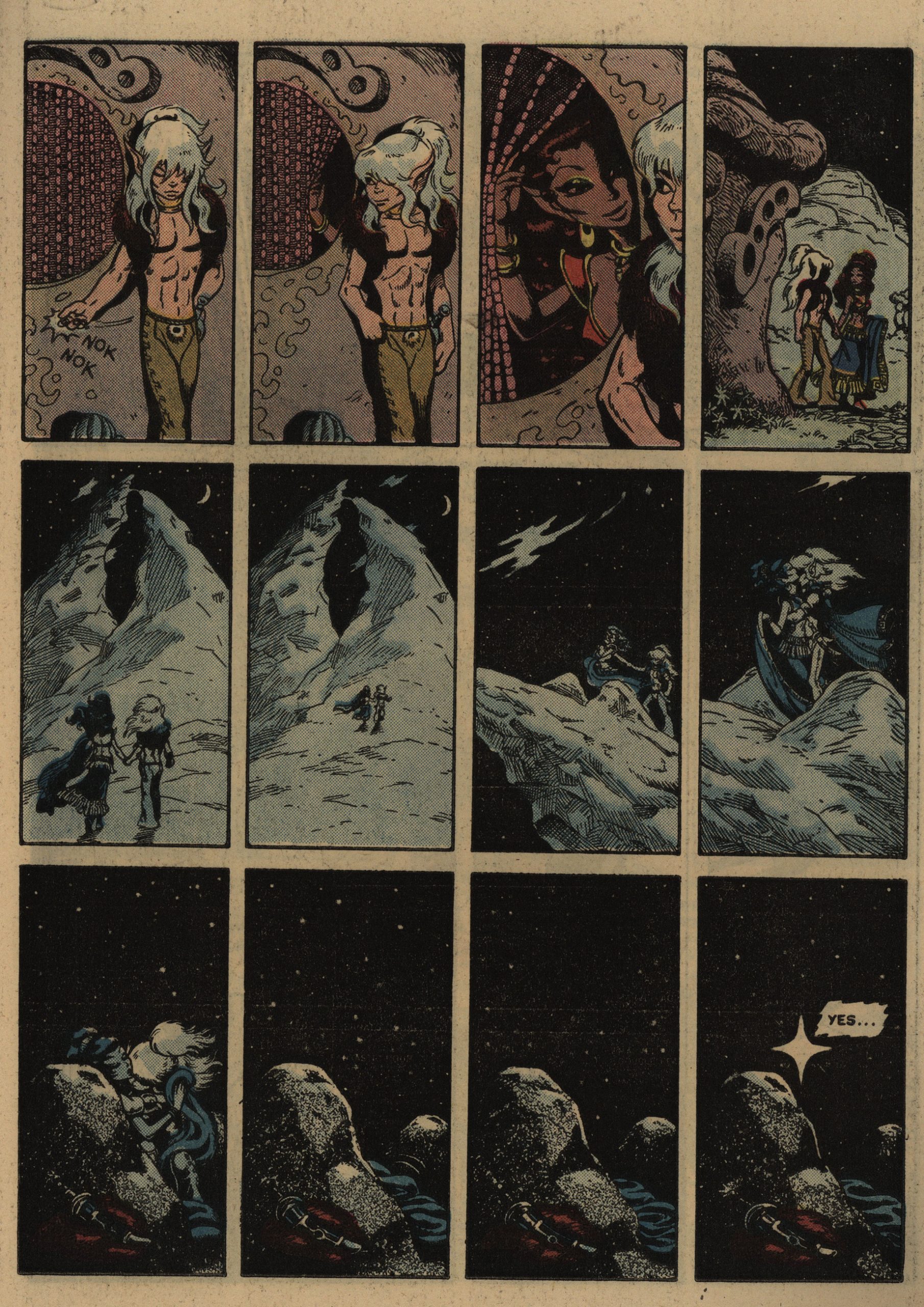 Elfquest was slightly controversial when it was published by Warp due to scenes like this *gasp* sex! so I was wondering whether Epic would elide some of this stuff when publishing it for the newsstand. But they don’t seem to? 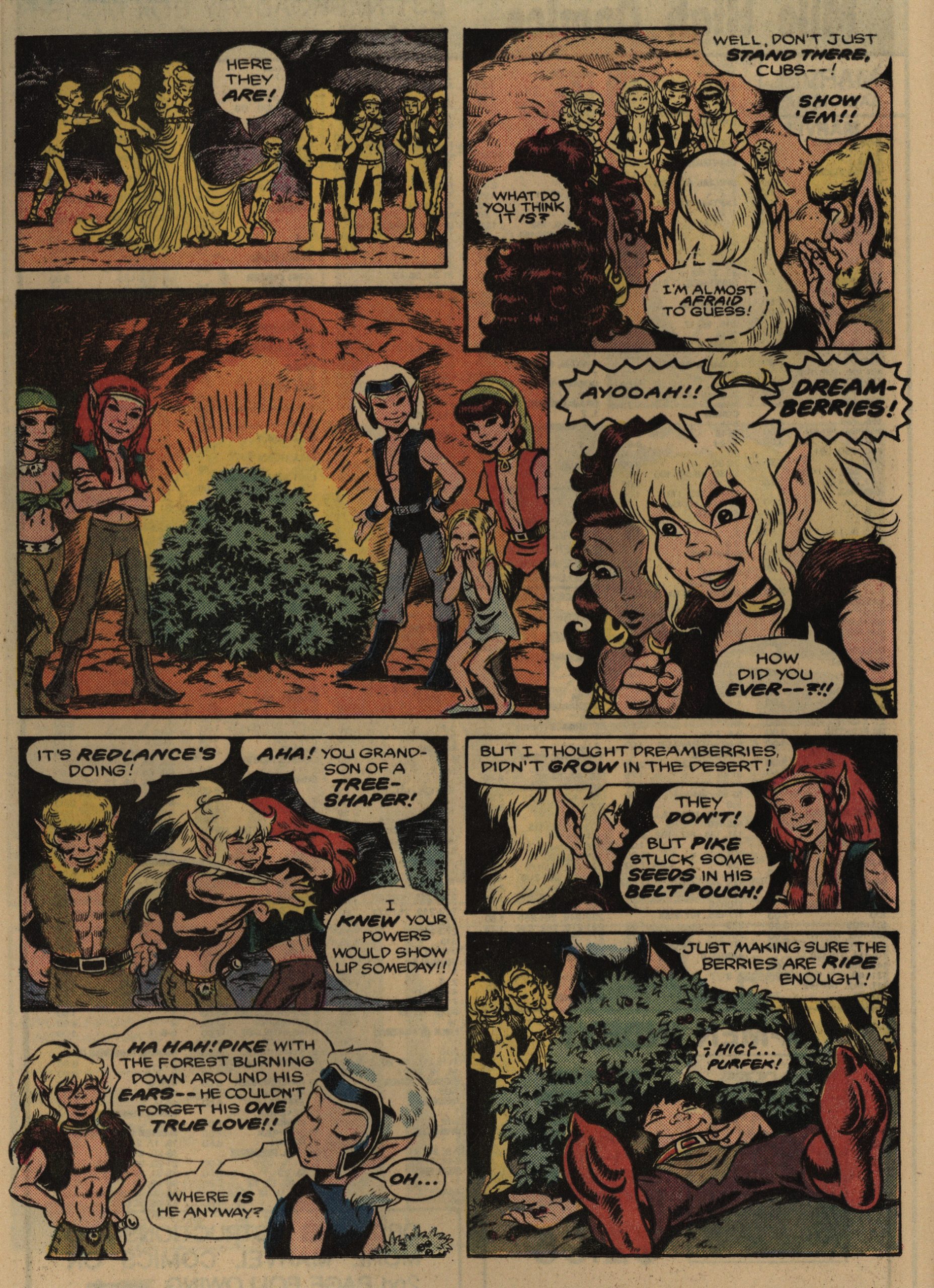 They don’t get rid of the drugs I mean alcohol references either. What matters with comics are the pages, but *sigh*. 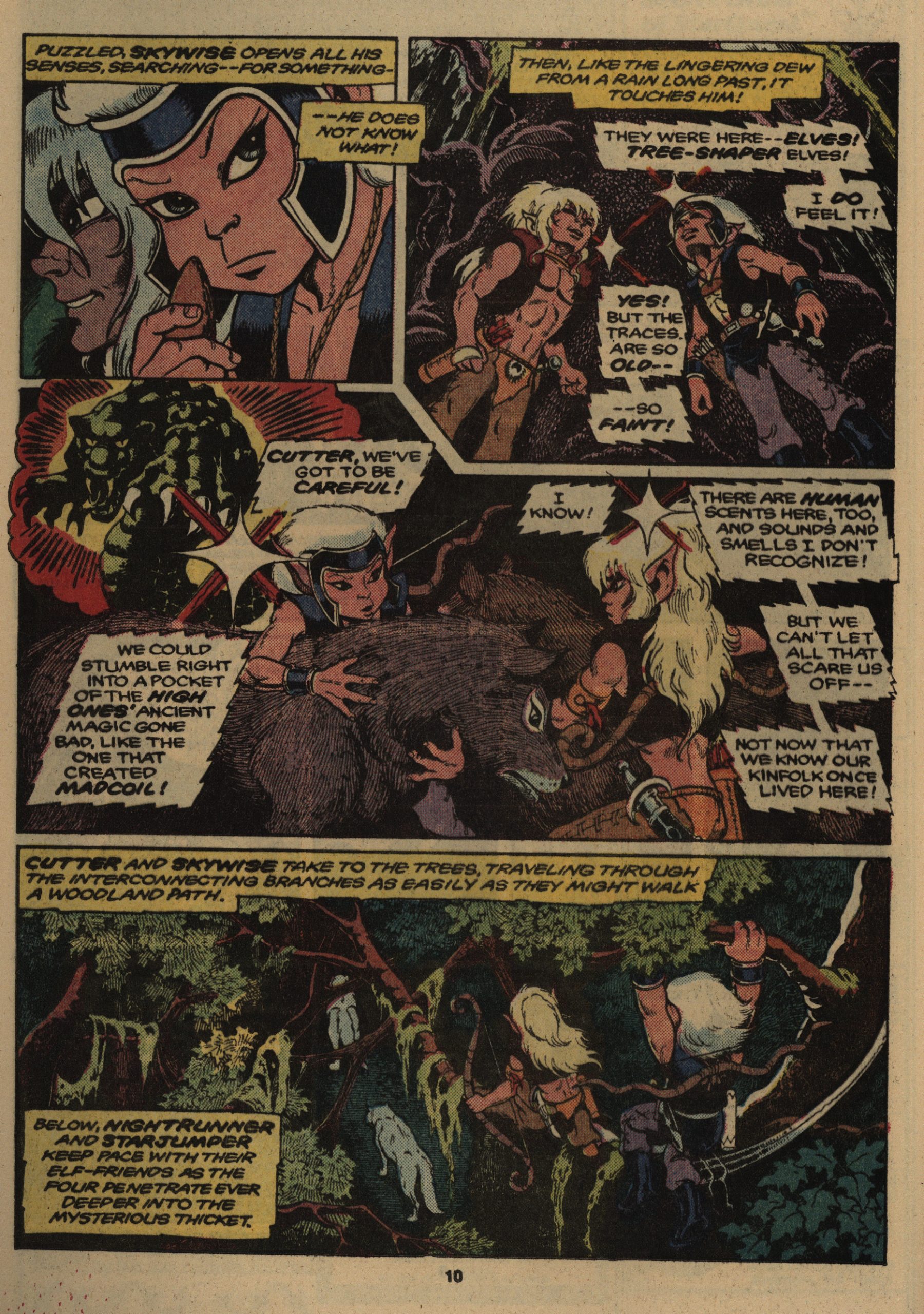 OK, let’s talk about the pages: The colouring worked quite well on the first issues, but as Pini got ever-more detailed on the artwork, things start to muddy up a lot, and the pages get somewhat harder to parse. 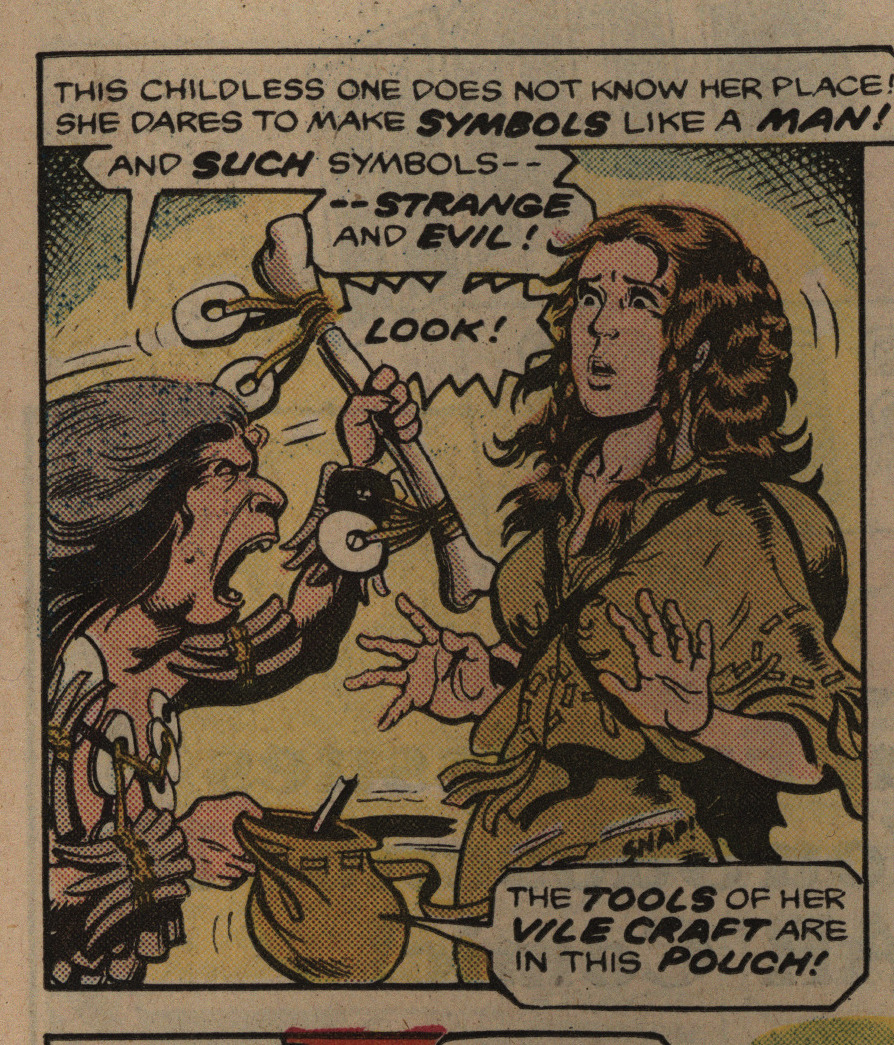 Heh. I wonder who Pini modelled that artist (who dares to make symbols like a man) after. Since she’s the prettiest human in the entire book, I’m guessing it’s… well, you guessed it. Most of the new pages look like they’re totally Pini, but a couple of them looks like they’ve been inked by somebody else. The face on that guy, for instance, looks very non-Pini. At some point, Marvel stopped printing Elfquest at an actual professional printer and went with somebody who’s fashioned printing equipment out of potatoes.

I mean, that’s the only explanation I can see for these issues. It’s getting to be rather a chore to read this now, since everything is just an ugly, ugly mess. Some fantasy things you read and think “man, this is such a rich world and we only get glimpses of everything the creator has mapped out”. Not so much in Elfquest: Sure, there’s a lot of details, but it seems like we get an infodump on everything Pini has thought of, so it feels rather shallow. I mean, what we see is what there is, I think.

Nastybad typething! The interesting bit here is that they apparently were selling 130K copies per issue. That’s quite respectable. They printed 280K, though? That’s probably normal newsstand distribution lossage? I don’t know what that says about profitability, and I may well be misinterpreting what those numbers say. Ah, right; they started the new Elfquest er quest while the previous one was running at Epic. I wonder whether that was a sound business decision or not: Having two series running at the same time sounds slightly confusing. On the other hand, the Epic series had vastly better distribution, so perhaps it was effective advertising? 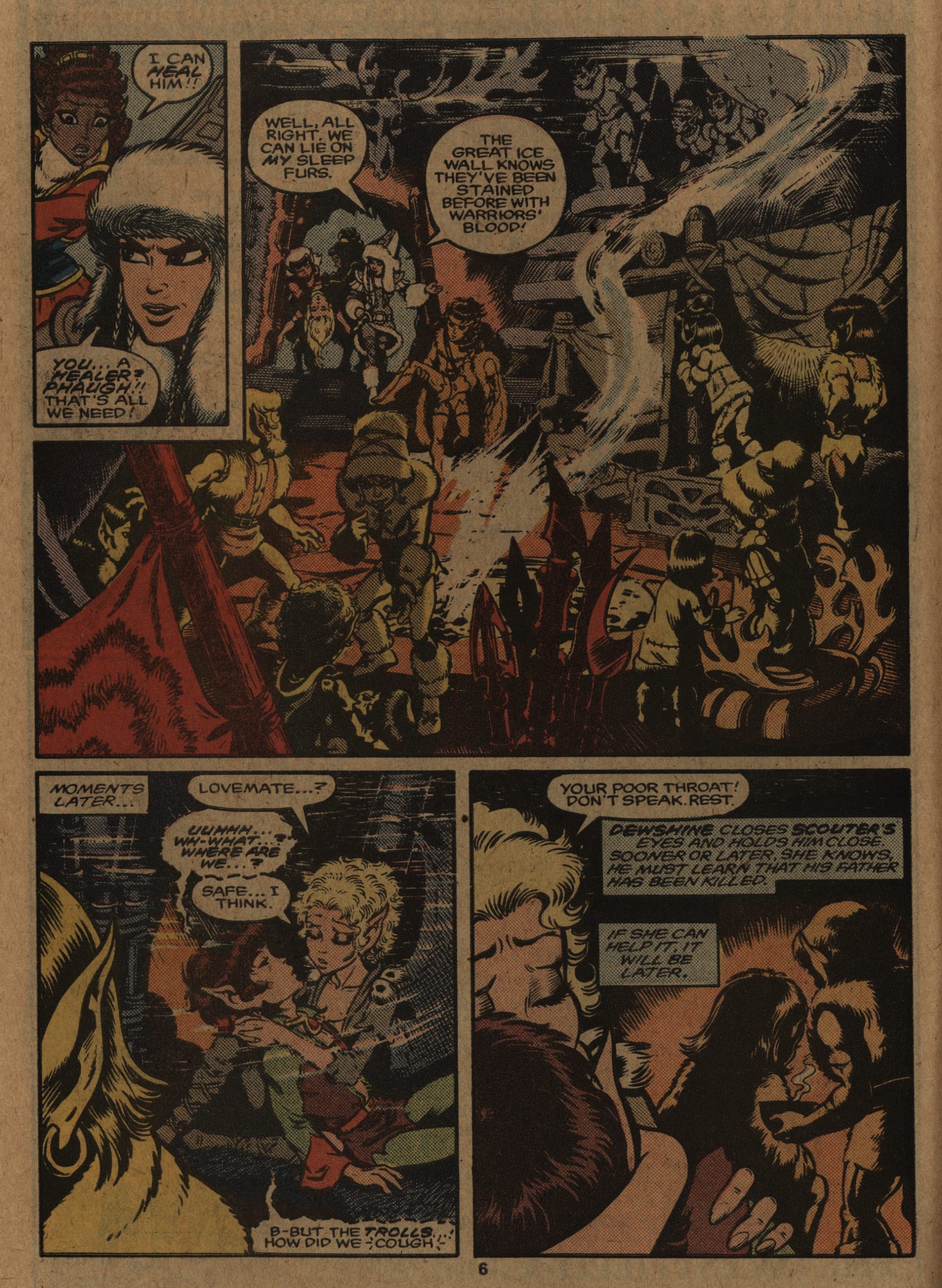 OK, we’ve now come to the original issue sixteen, which is the first issue I have here, so let’s compare and contrast a page or two, and see how they’re doing the re-edits at issue breaks. So above you have an example new page… I don’t really think there’s anything at all to recommend the Epic version: Everything looks better originally, in black and white. You can see all the details and what makes Pini’s artwork so attractive. Sure, it’s cute, but she also has a pretty good design sense, using black spotting to compose a page and lead the eye.

Let’s look at an issue changeover. Here’s the final page of issue 16: Note the “to be continued”. This is in the middle of an Epic issue, so that’s just been edited out, but otherwise it’s identical (besides being relettered, but the entire series has). 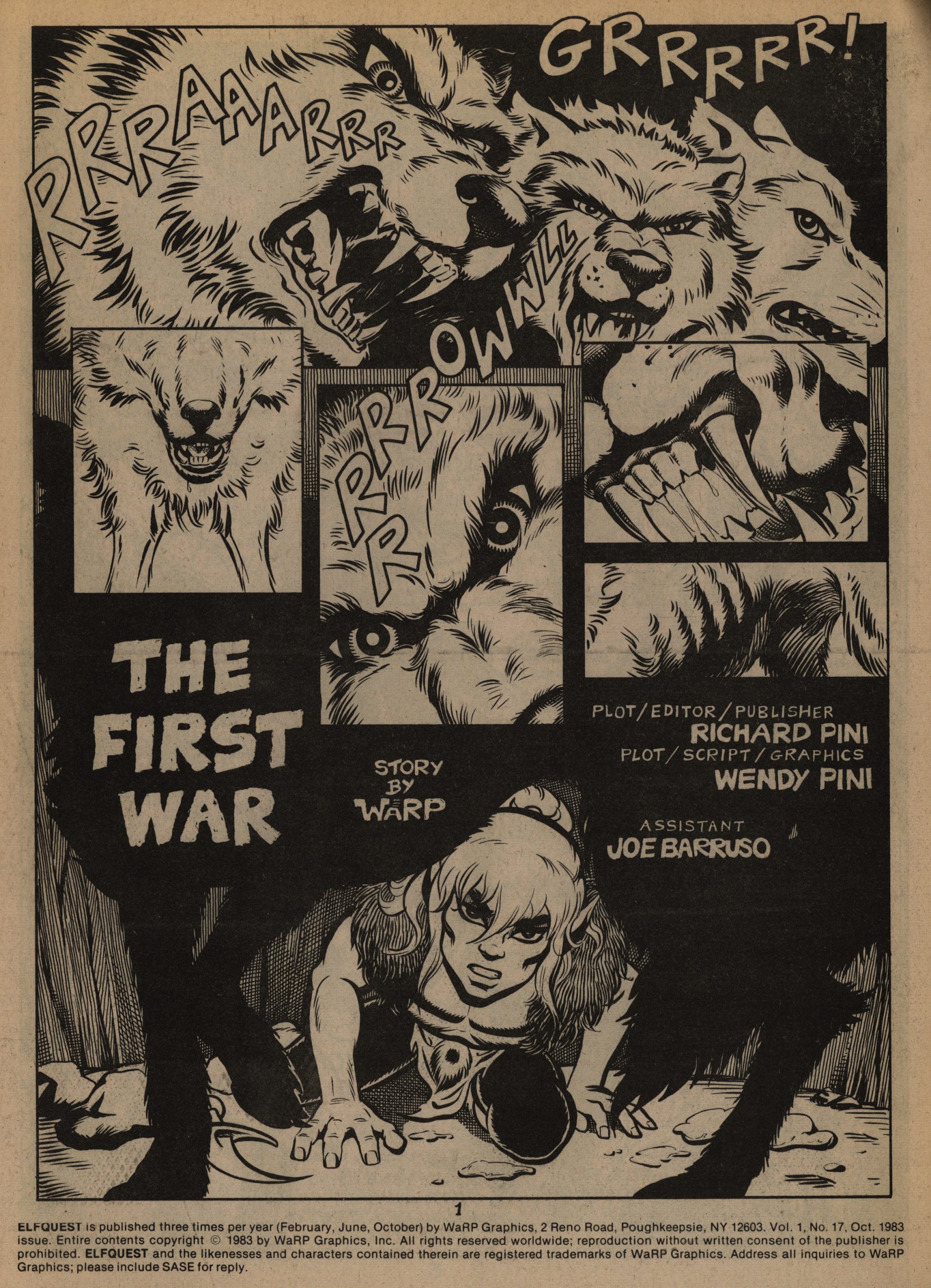 This is the first page of issue 17… 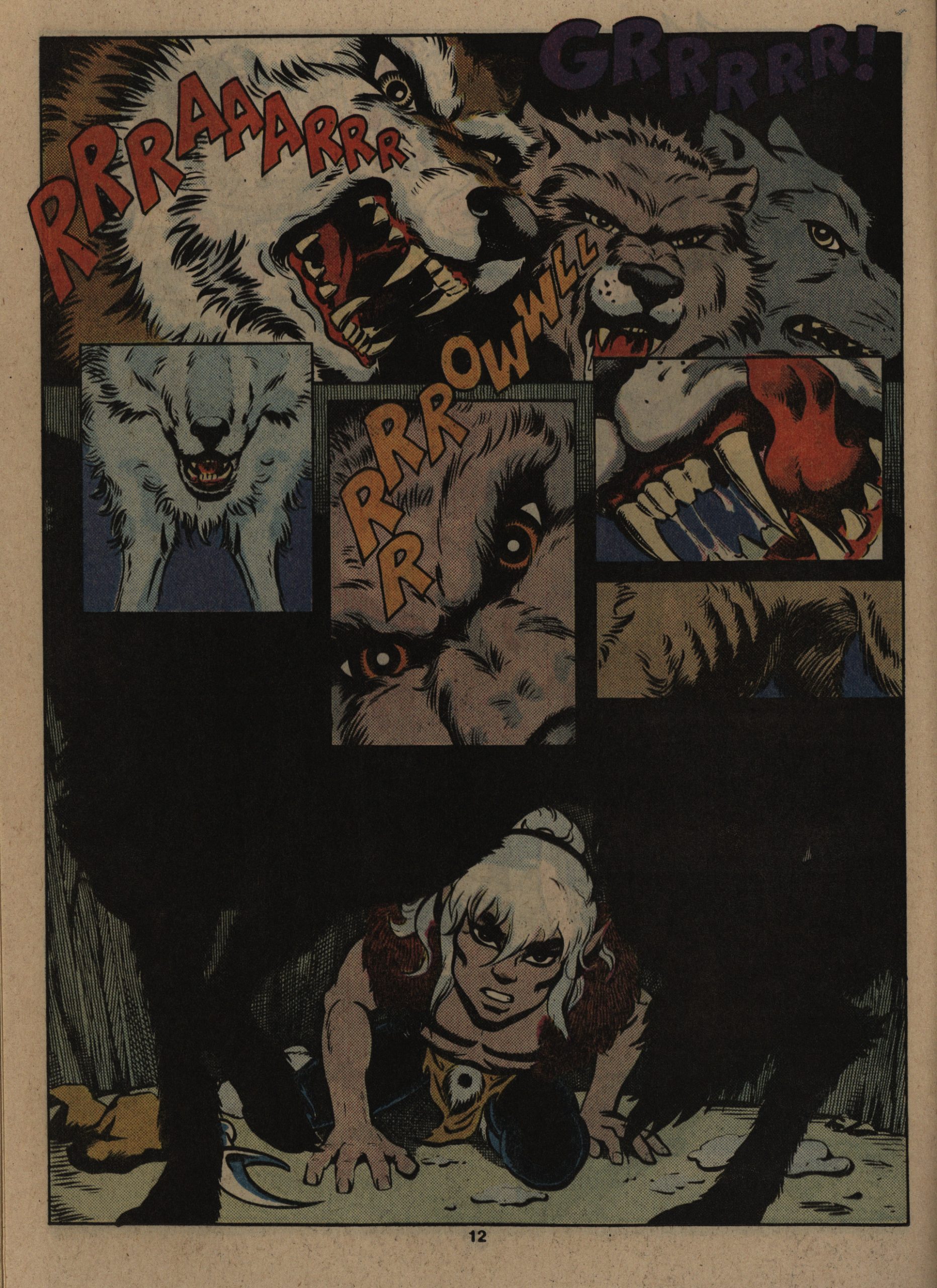 … which isn’t the first page in the Epic series, so all the titles have been edited out. (And Joe Barruso has been Stalined out of existence.)

It’s pretty well done. But how about going the other way? Here’s where that Epic issue ends: It’s a cliffhanger, eh? There’s gonna be dancing? And pounding?! In a Marvel comic!? 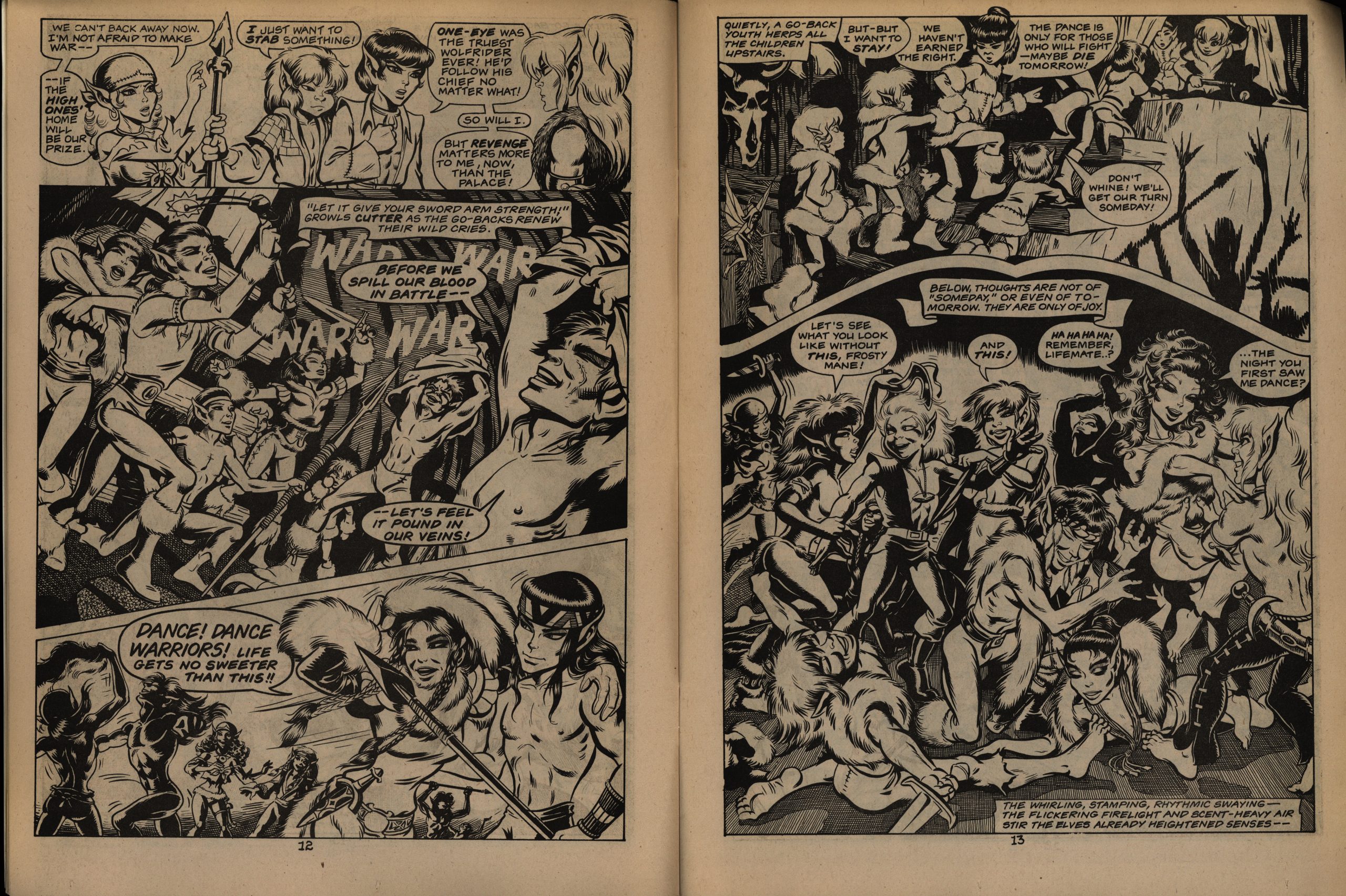 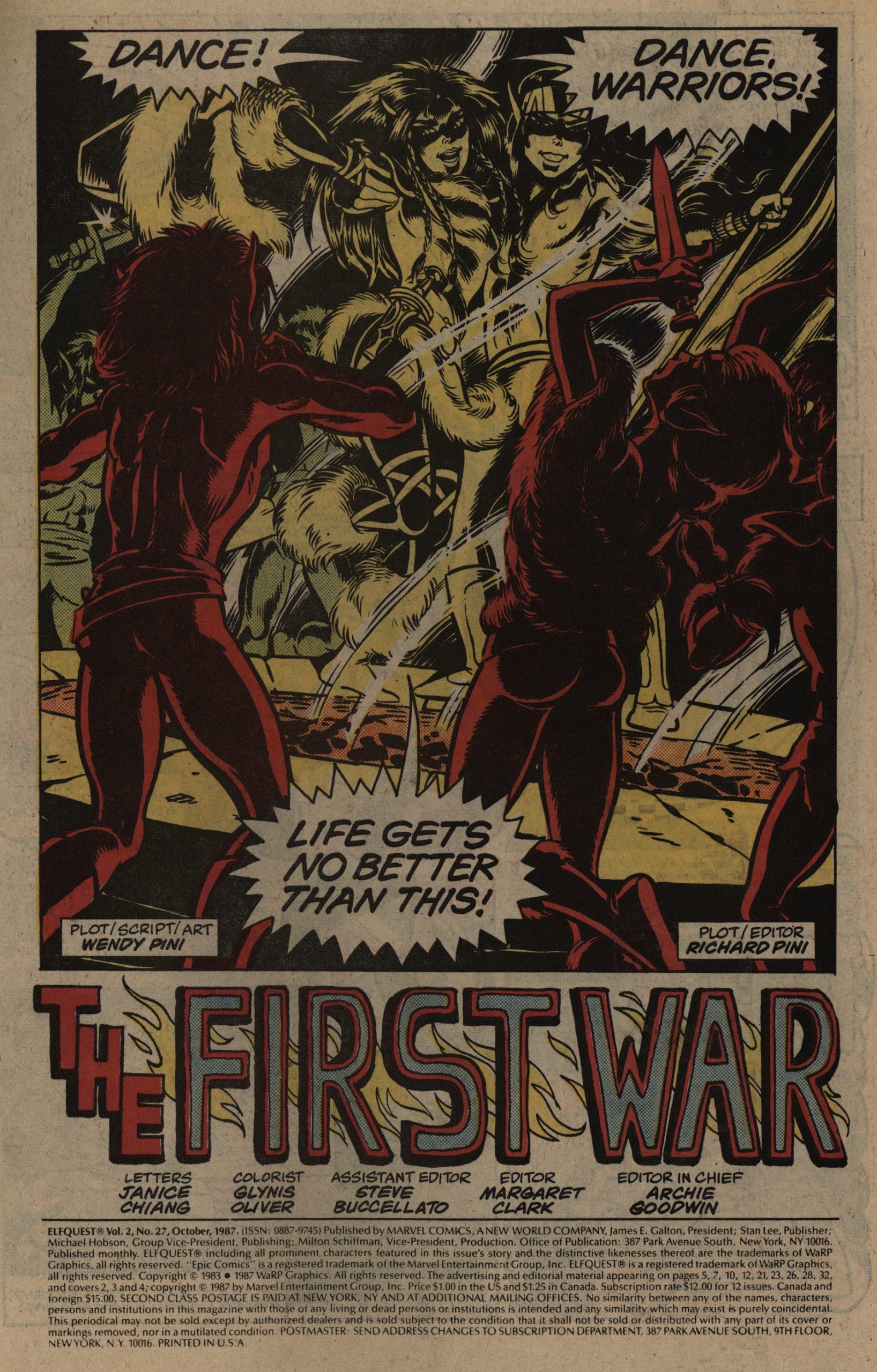 So the next Epic issue gets a new front page… 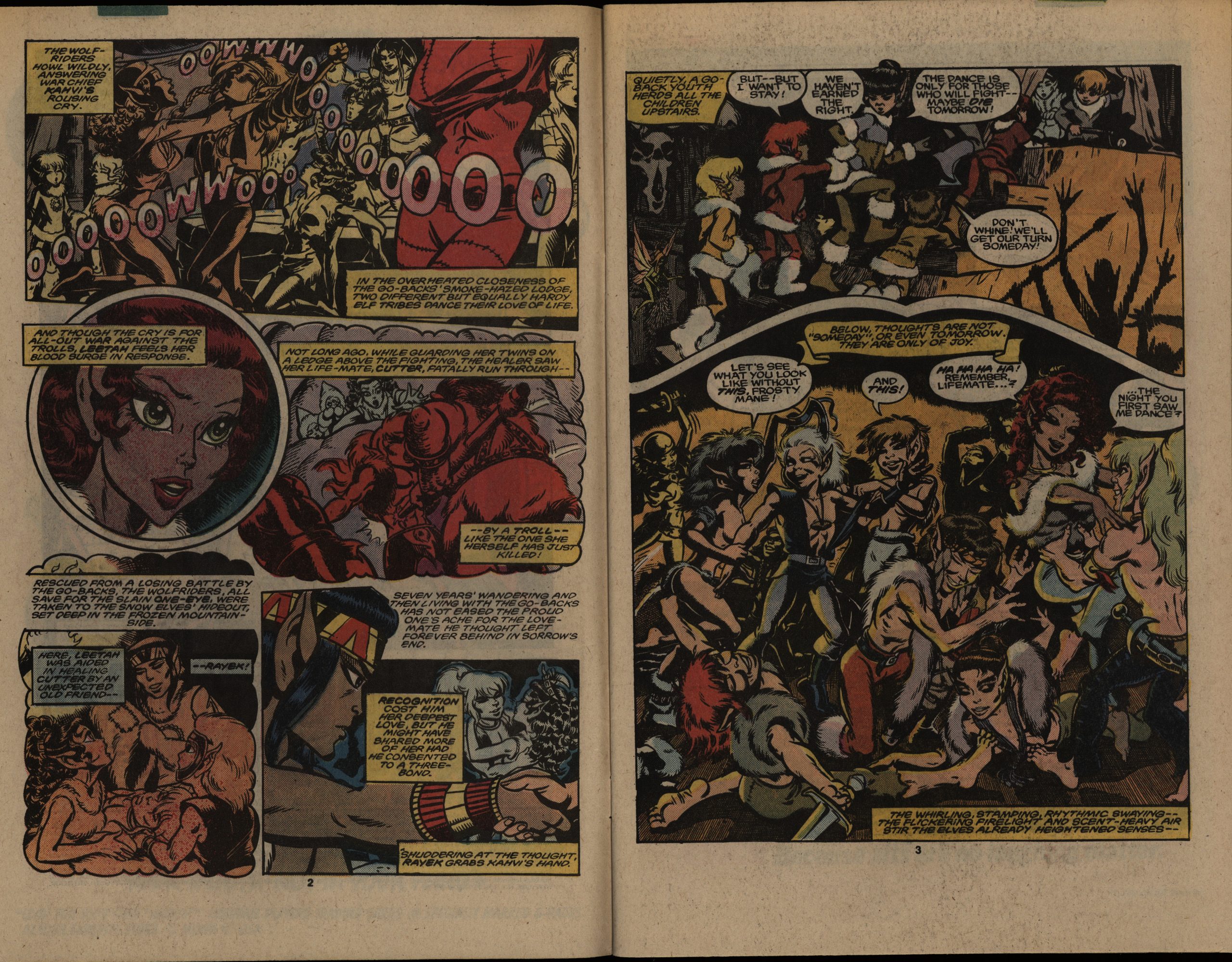 GROTH: One of the paradoxes is that the audience we’re
talking to right now is not the audience we’re worried about.
Obviously these people will buy anything.
FLYNN: I was wondering, in fact, how many people here are
over the age, say, of 16. I’d say most of you. In which case,
we’re talking to people who, if they object to material, it’s
their own decision as to whether or not they’re going to buy
it. I mean, who in this room can buy something and have
their mother slap their hand for buying it? [laughter]
MEMBER OF AUDIENCE: I have to deal with four year
olds, and 65 different families. Now it doesn’t matter if I think
the comic is all right, but if I bring in your wife’s work (talking
to Pini], I’ll have six teachers on my tail because you have
animals that are not appropriate for my children to watch,
even in a book. You have nudity, in one issue.
PINI: And more to come. [laughter]
MEMBER OF AUDIENCE: 1 mean, I’ve got six parents
who want to order it, but I’ve got 20 parents who never want
to see it again. I can’t have Supeman, I can’t have Archie.
Little Lulu! Even if the kids are 12 years old.
GROTH: Where is this?
MEMBER OF AUDIENCE: Frankfurt. (Audience moans
“Ohh,” followed by laughter] Mind you, when I was in Ger-
mantown I could bring in anything I wanted, including things like
Red Sonja. I wouldn’t dare bring that into school now, yet these same
children can go home and watch The Texas Chainsaw Massacre every
night on HBO. Parents will reject [on the basis of) one item because
they don’t like it. So you’re up against that.

Hm… couldn’t find many more references to it. 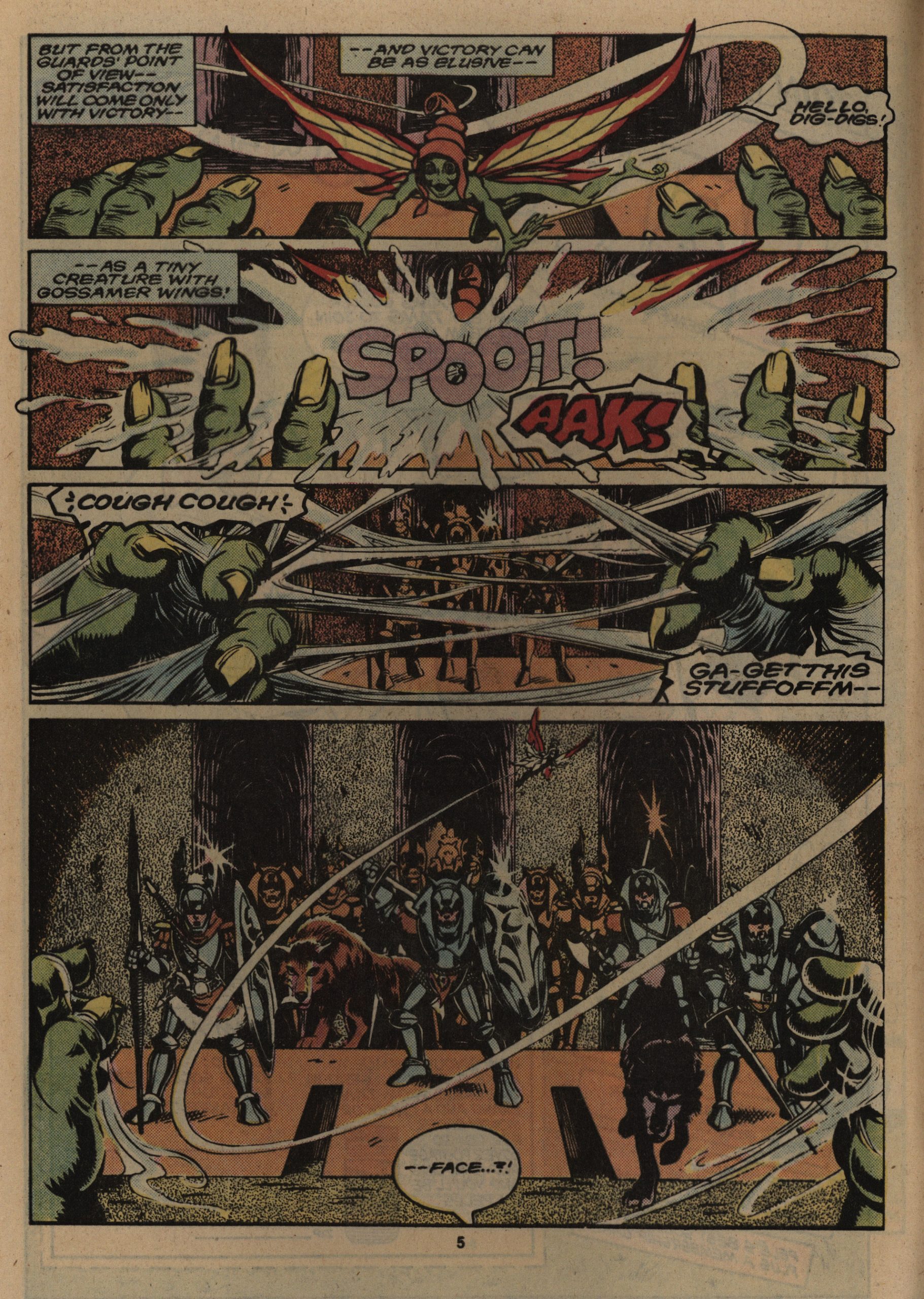 Hey, that’s a pretty fun page. From the point of view of the troll being attacked. Pretty unusual. Oh yeah. SPOILERS: This is how the series ends, with a word dump of the elf history. I remember being really let down by this when I was reading it as er a teenager. Perhaps that explains why I never bothered to go back and read the first half.

You may ask why I am bothering to
review a book that is little more
than a reprint of a story originally
published seven years ago. My
reason is quite simple. The original
series had nearly reached the end
of its run when I inherited the posi-
tion of resident critic around here. I
could have reviewed the final
issue, but since I had previously
read only one of the books, I really
didn’t feel qualified to pass judg-
ment or even the one issue of this
title.
I have heard that creator Wendy
Pini expressed some disappoint-
ment that no critic bothered to
write an overview of the entire
series when it concluded. As ex-
ptained above, my reason for not
doing so should be obvious. Now
however, in what could be a major
precedent for independent crea-
tors, the series is being reprinted
via the pages of Marvel’s Epic line
of comics. Thus, it seemed 9ppro-
priate for me to finally (re)examine
this fi rst issue.

Elfquest has become a cult
favorite, yet remained a book I
would always pass by. It simply
looked too—cute—for my tastes, I
stilt feel that way but, speaking ob-
jectively, I must say that the Pinis
have shown a great flair for
creating ope of the most
marketable concepts around–
something all the major comic
companies originally failed to see.

Cute… marketable… That’s such a smarmy missing-the-point critique that it makes me want to like Elfquest more than I do.

Anyway! Elfquest has been collected and reprinted a dozen time since this, and it’s available in a bookstore close to you as we speak. As you read, I mean. The Epic iteration is the worst one of all of these, so buy one of the other ones.