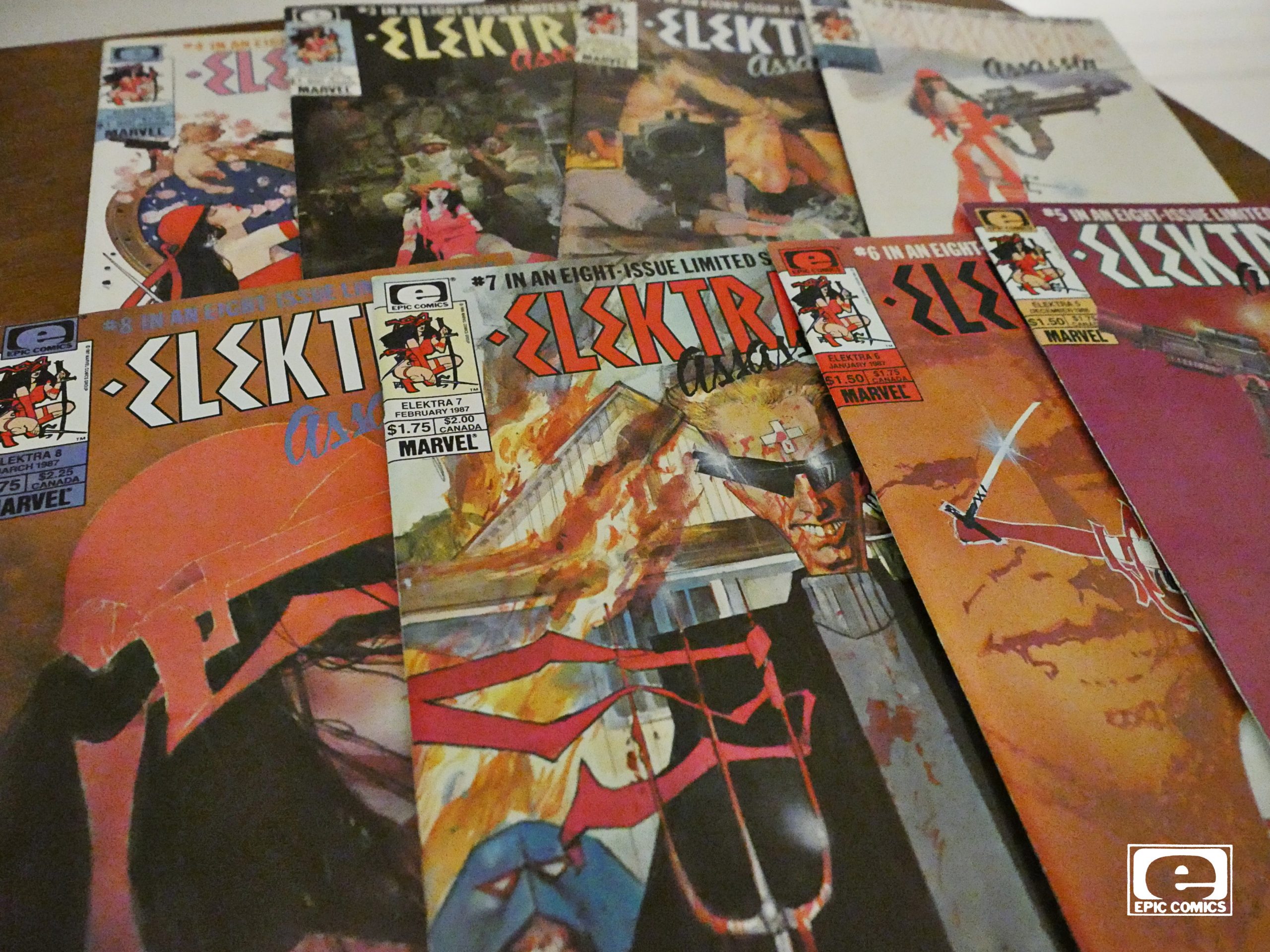 First of all, I thought I’d read this back in the 80s, but I couldn’t find the issues, and reading it now, I think that’s unlikely. Well, this was 1986, and I was too grown-up to read super-hero comics. (I’ve unfortunately regressed now.)

And I really thought this was a “prestige format” book, but it’s the normal 32-page Epic floppy format… 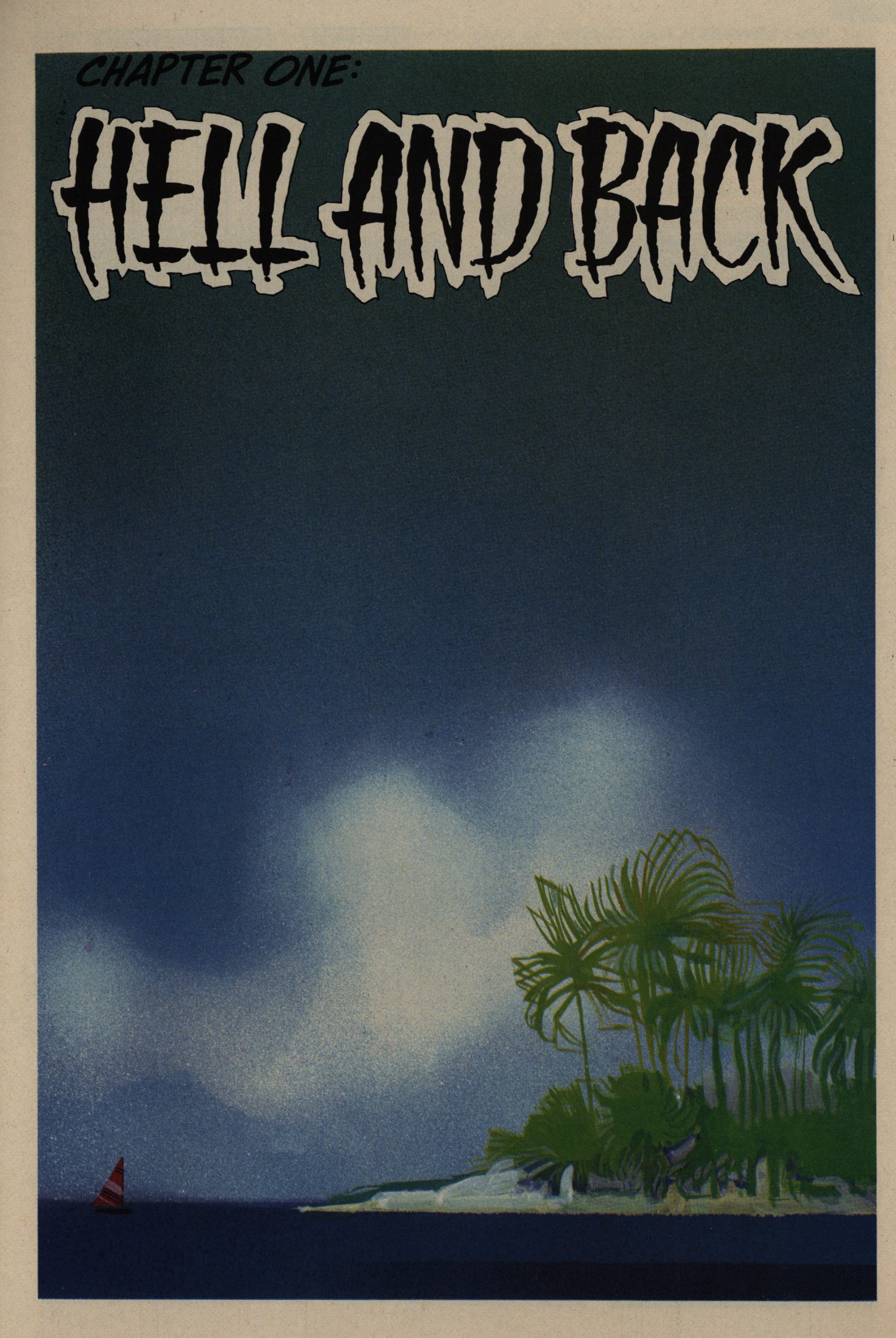 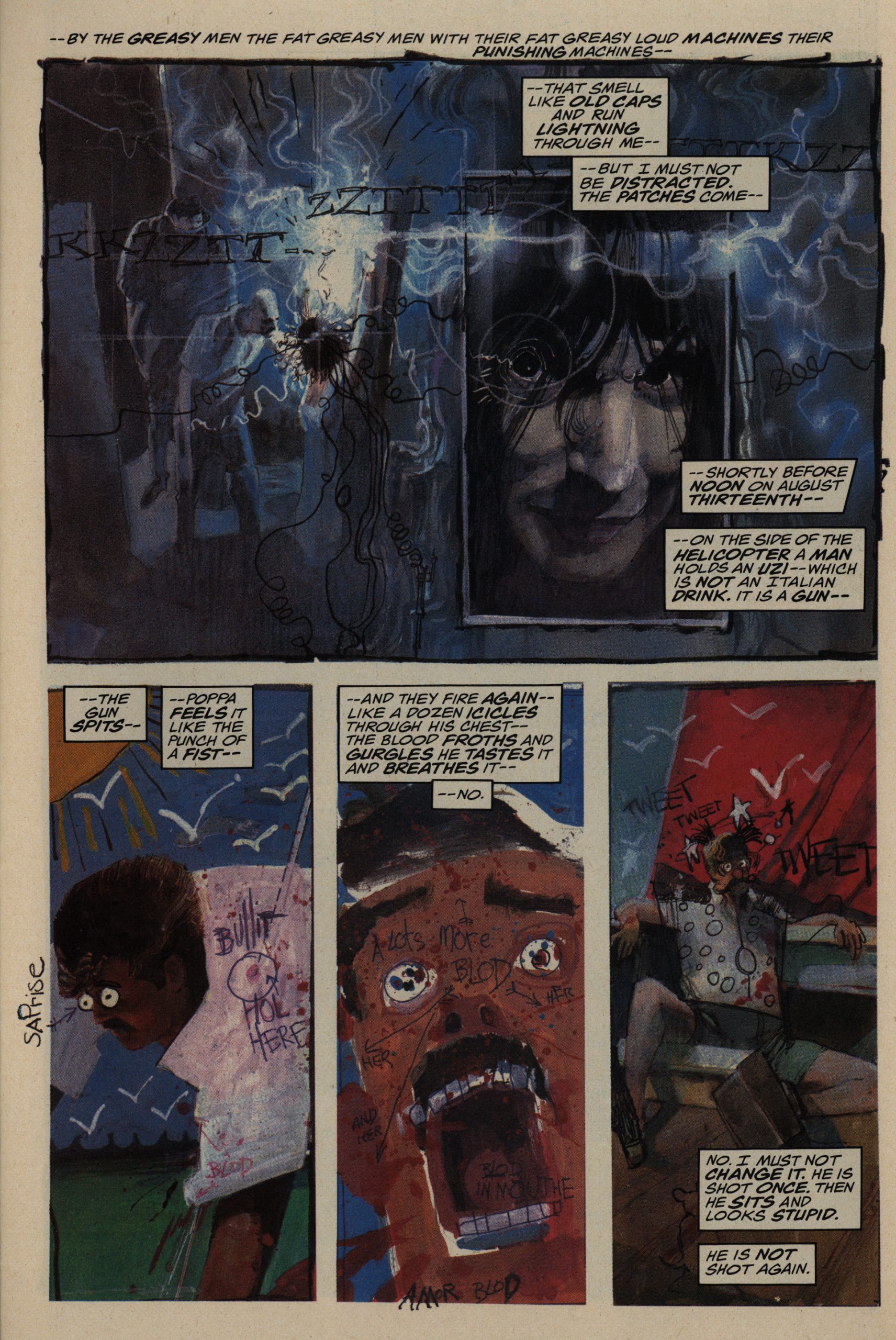 And, yes, the artwork here is very very Sienkiewicz. Was this the first book where he was all this? I guess I remember his evolution during the New Mutants years, getting wilder and wilder. 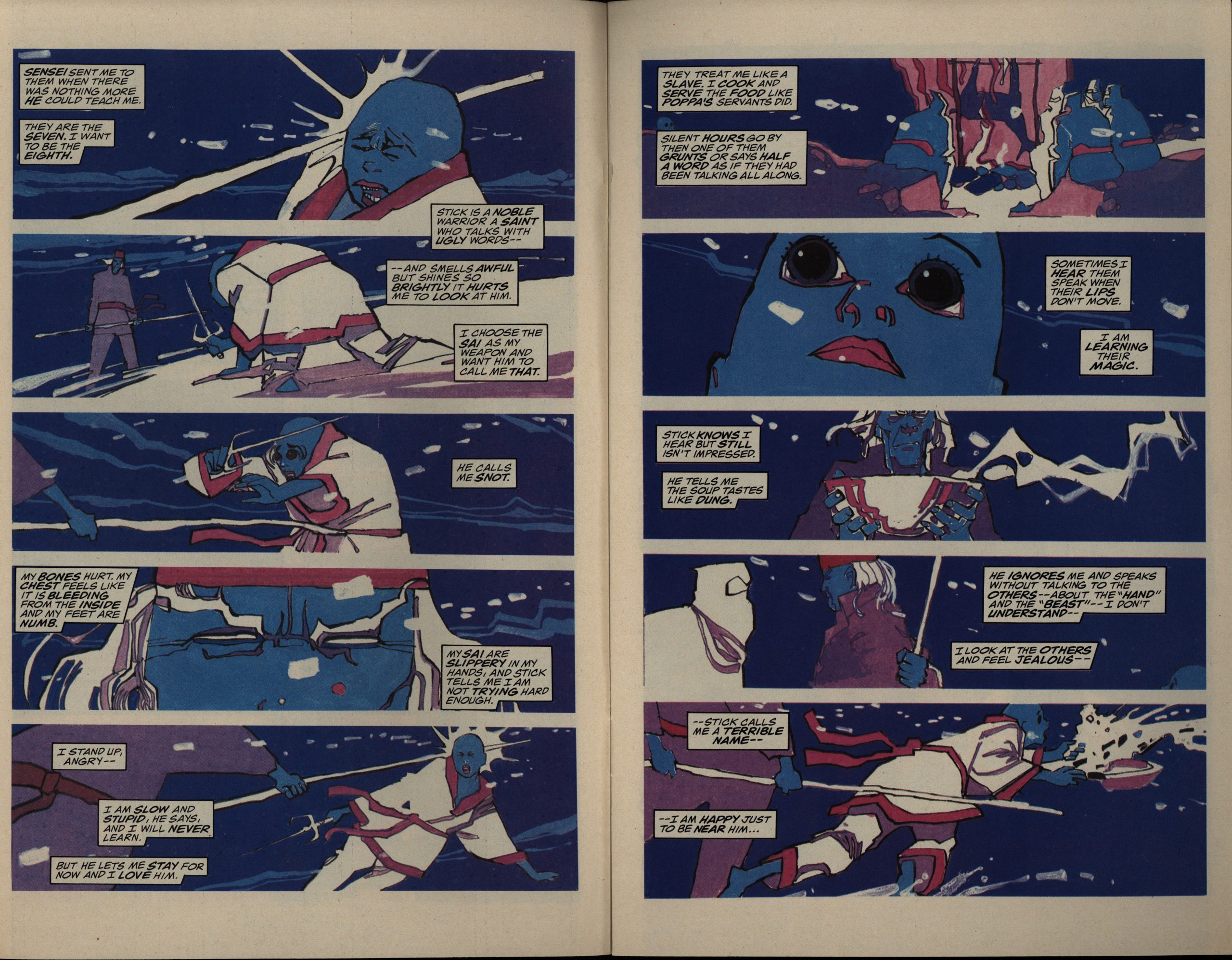 But wow. I haven’t ever seen him do stuff like this.

Every time you turn a page here, it’s something new and wonderful, but, OK, I’m not going to scan the entire series and just go “oh, wow”, am I? 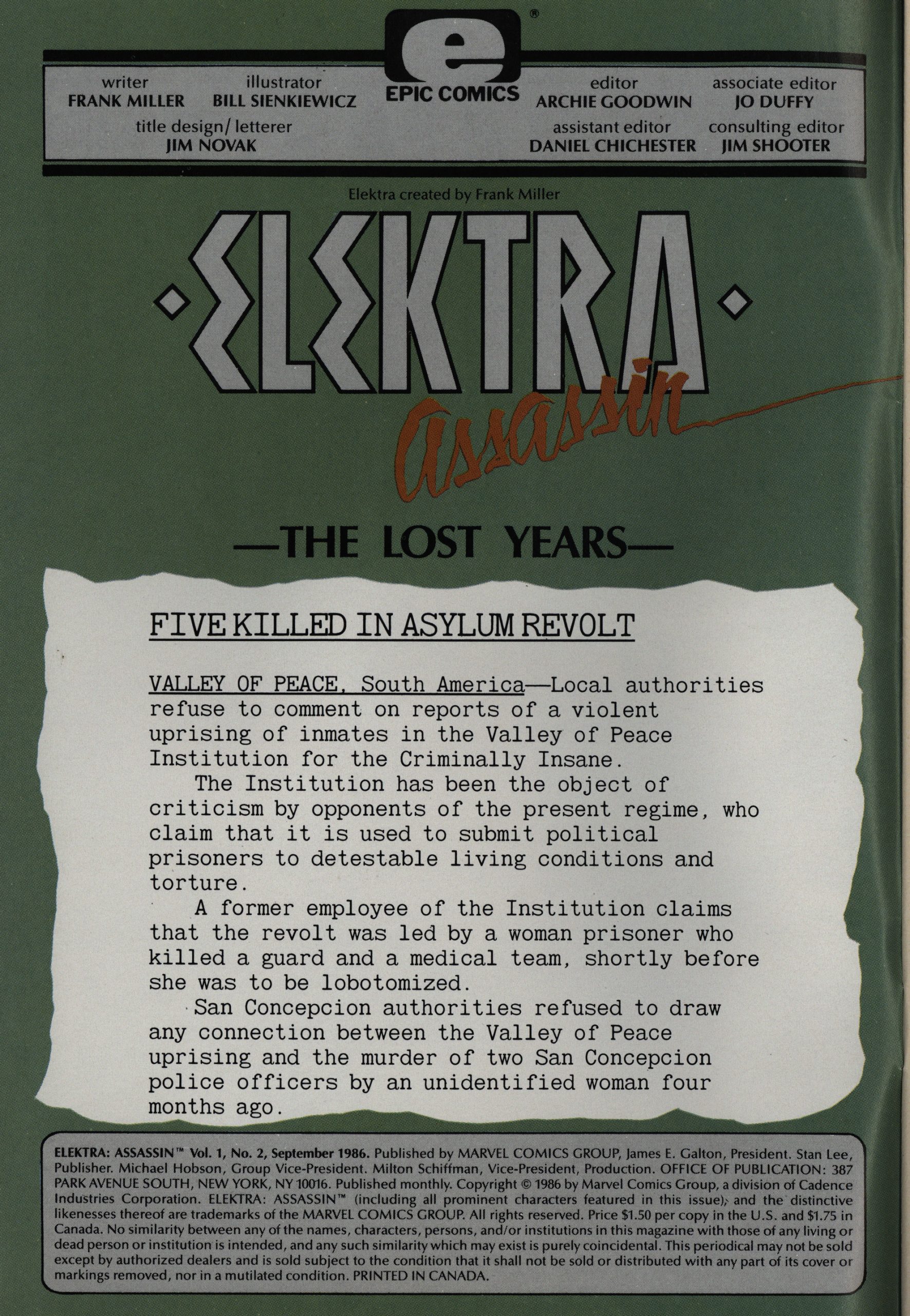 A pet peeve of mine while reading these comics from Epic is that virtually all of them, no matter how well-suited for later collections (although that wasn’t really much of a thing at the time), there’d be a couple of pages of recapping per issue. So I hoped that they were going to avoid that by just doing the recap like above. 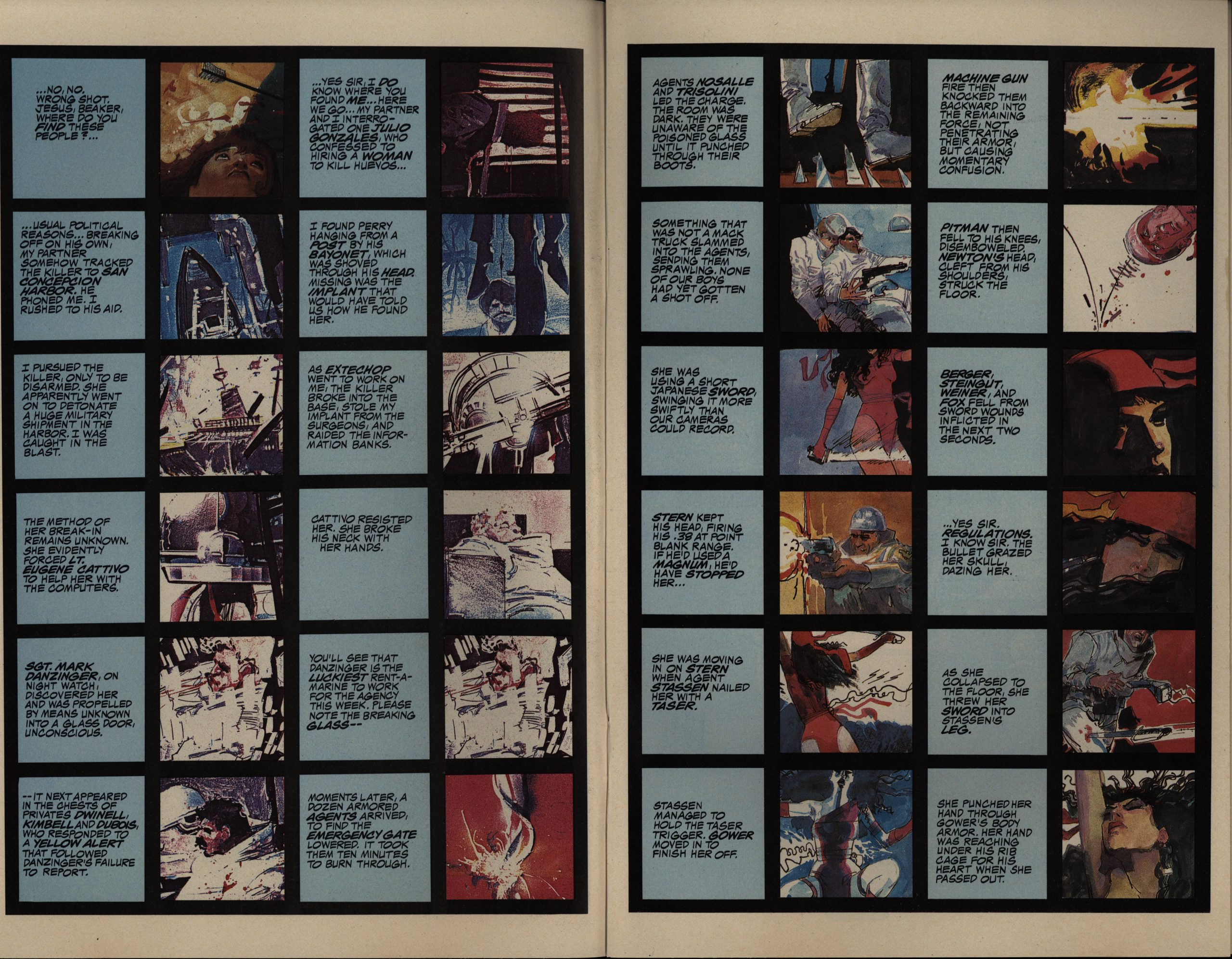 But, no. Must be some kind of editorial edict: Always recap. At least Miller and Sienkiewicz find in-story ways of doing the recaps, like having the Shield agents doing de/briefings. Still, it gets tedious when reading the same plot points for the eight time…

I hope they did some editing before doing the collected edition. 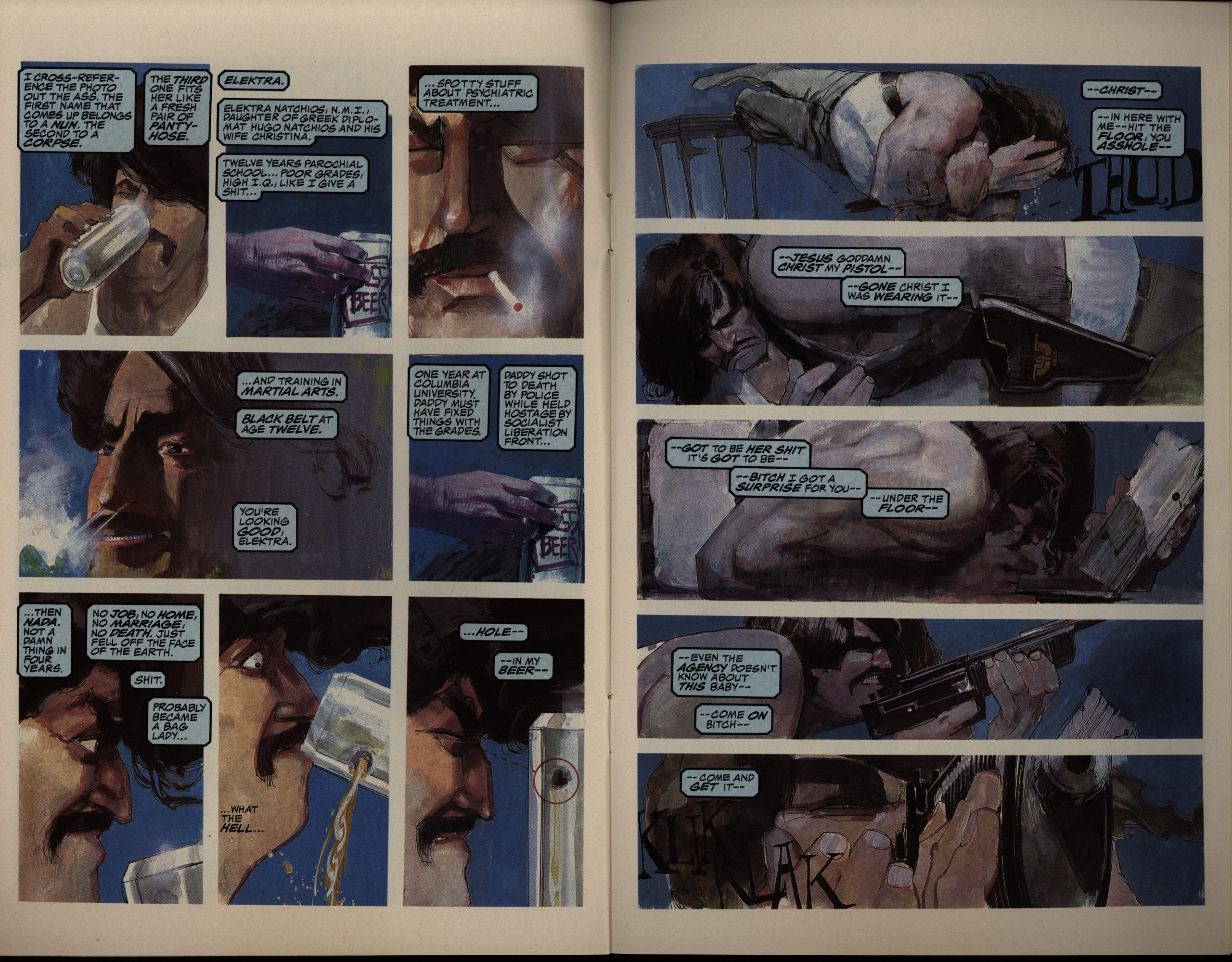 Oh, right: The story. It’s about Satan taking over the president’s brain, and Elektra (and that guy above there) stopping him. (I’m only being slightly inaccurate.) The storytelling is somewhat unstructured: It feels like we’re constantly looking at people doing something that’s not really advancing the plot much… but there isn’t that much of a plot, so why not spend our time reading pages like this?

Miller gets a bit wordy, and some of the pages are very dense, which doesn’t do much to cover up there not being much of a story here. 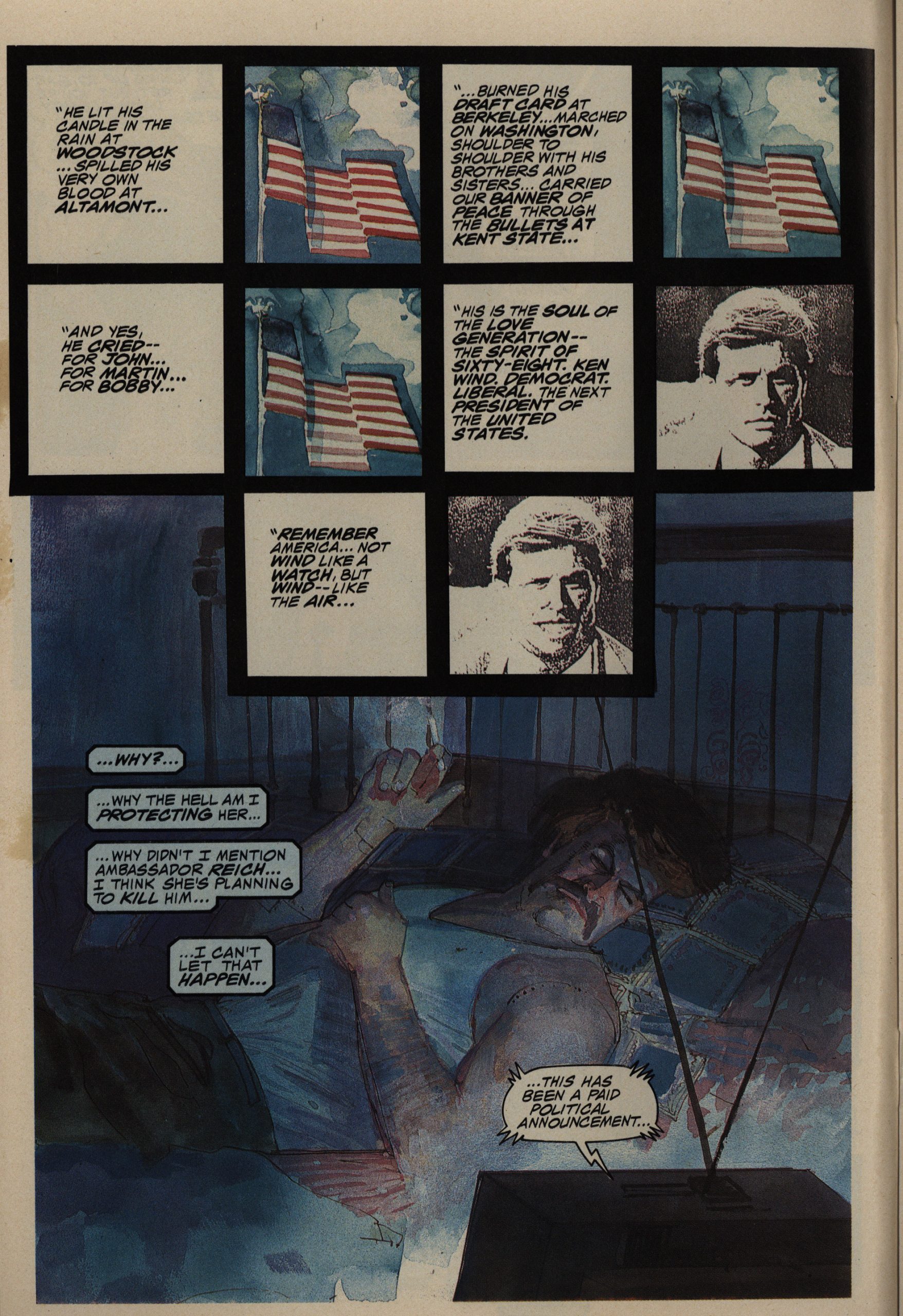 I like Sienkiewicz using a photocopy for the Walter Mondale character. (I’m assuming that’s who Miller is portraying up there, and he ran against a Reagan-like incumbent, so it sounds like the 1984 election.) 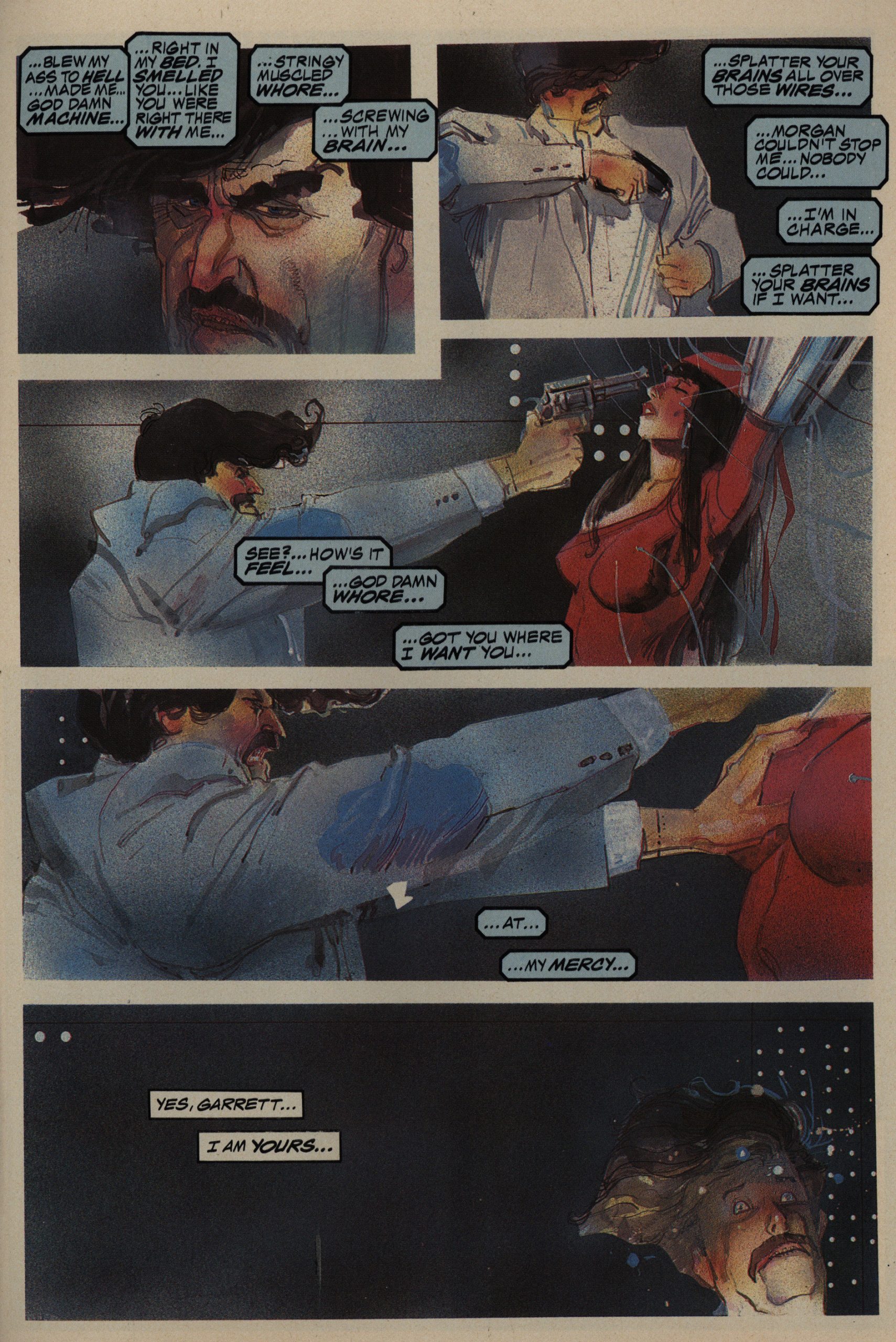 The guy (who turns out to be the hero, sort of) is later revealed to have four (?) statutory rape convictions against him. I wonder whether Miller… meant something else? 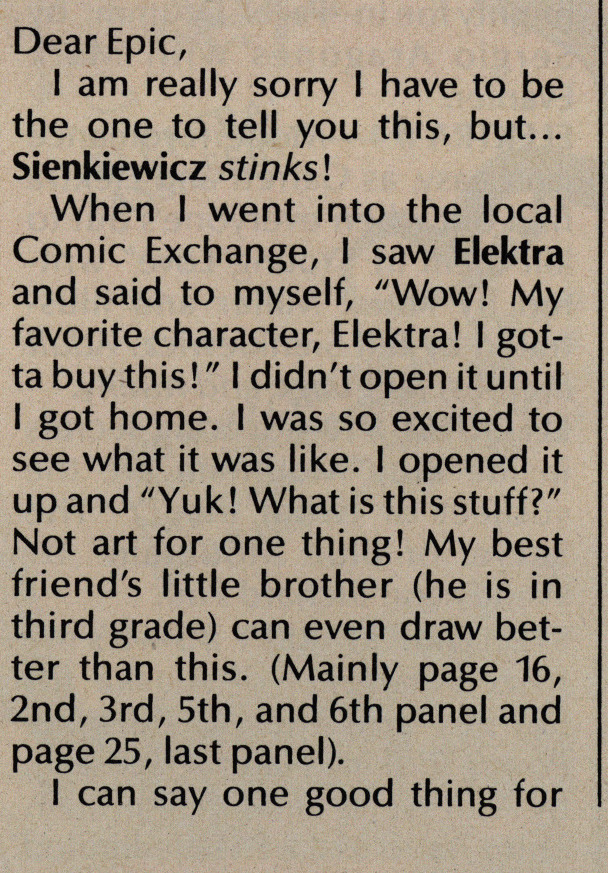 The letters are uniformly complimentary, except this one. 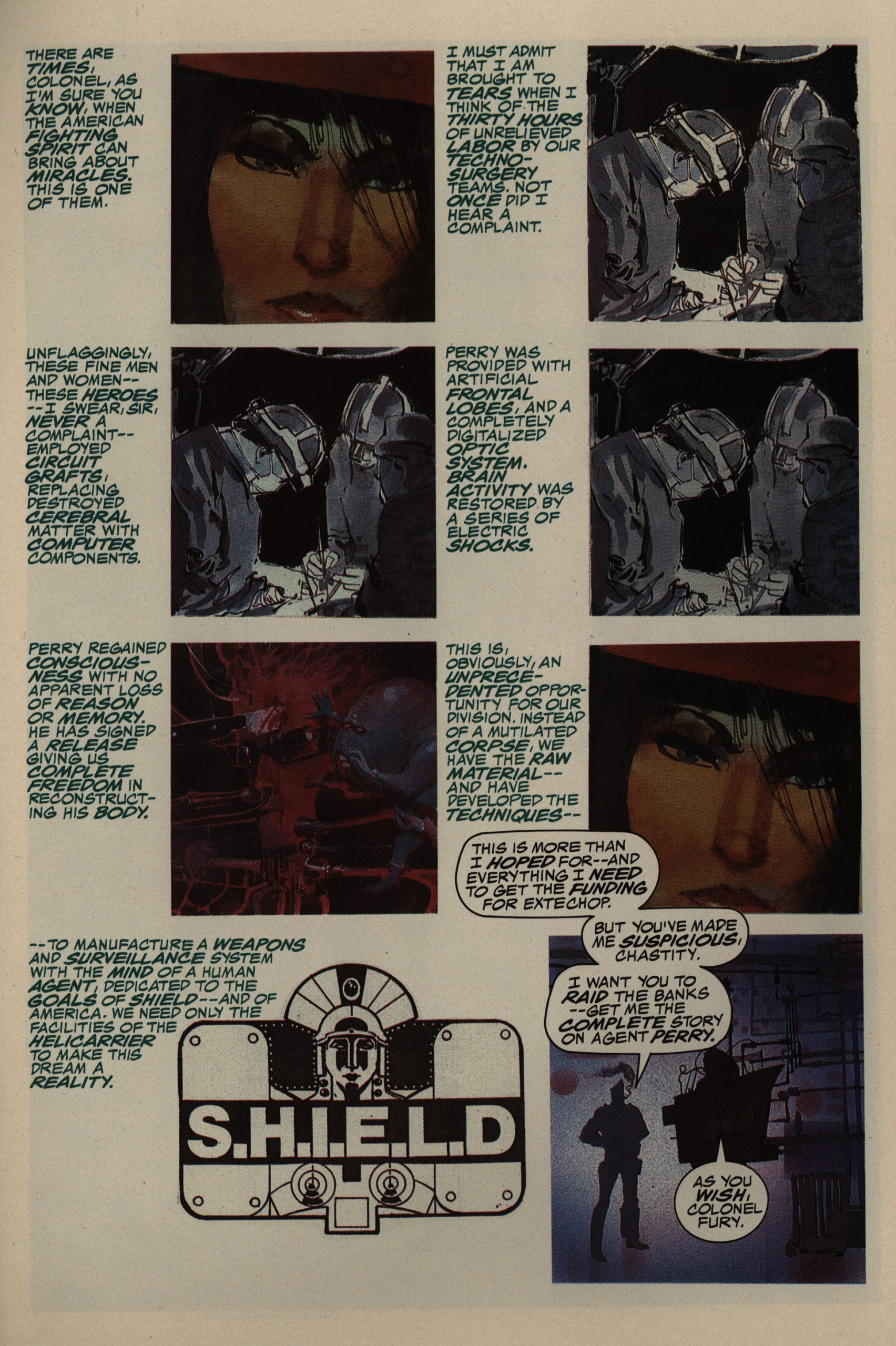 This page makes me wonder one thing: Did really good colour xeroxes exist in 1986? Because Sienkiewicz clearly does a lot of copying… It may not be just laziness; it has a certain stark graphical appeal. 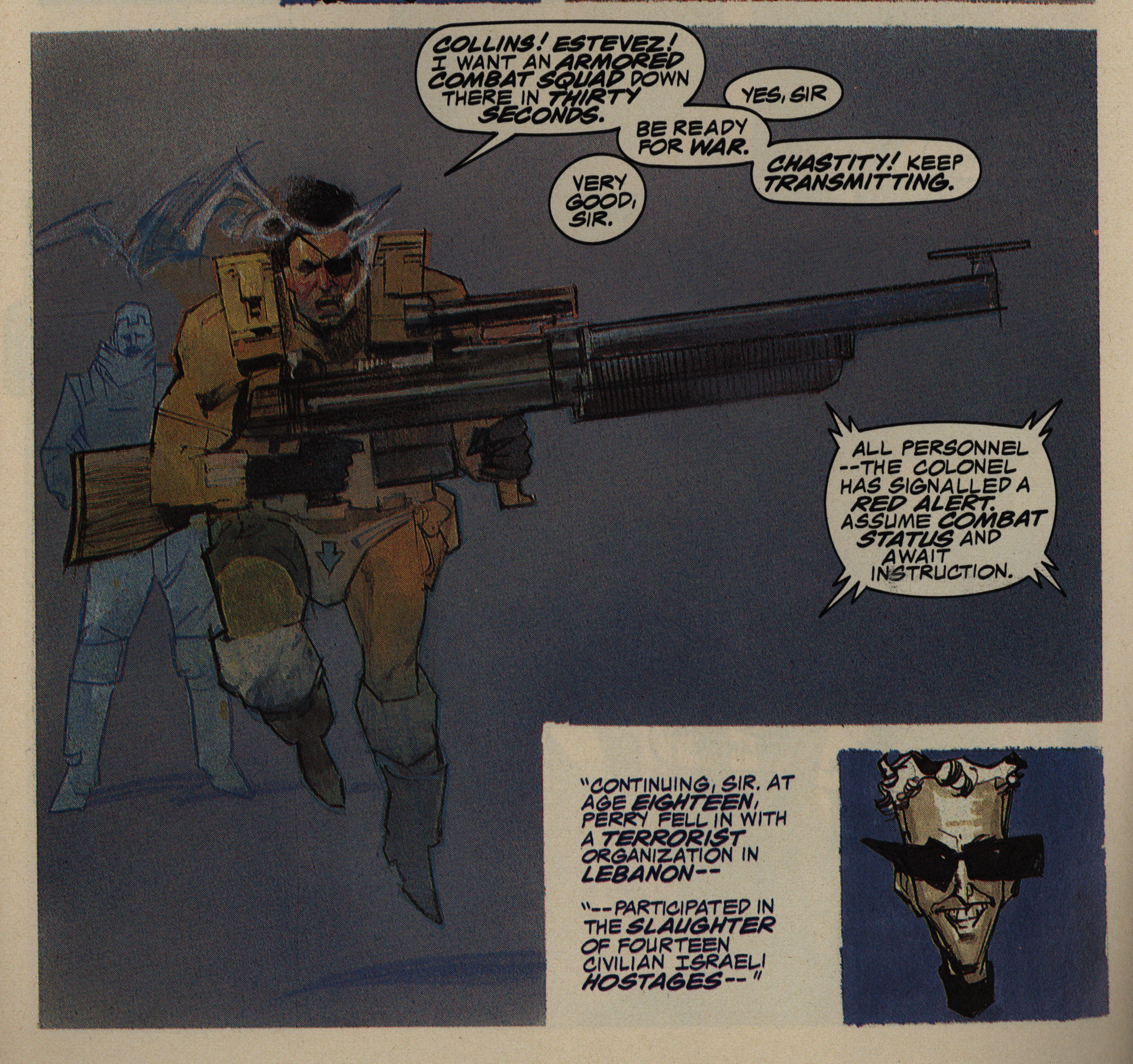 Anyway, since this is at Epic, the question of super-heroes doesn’t really rear its ugly head. But it is somewhat weird reading a story about magical Ninjas fighting SHIELD and killing the president without Fury every saying “well… perhaps we should call in The Fantastic Four? Or are they protecting the Earth from Galactus this week?” Having the story set within a universe of super-heroes makes no sense, so if they just don’t mention them, perhaps everything will be OK? 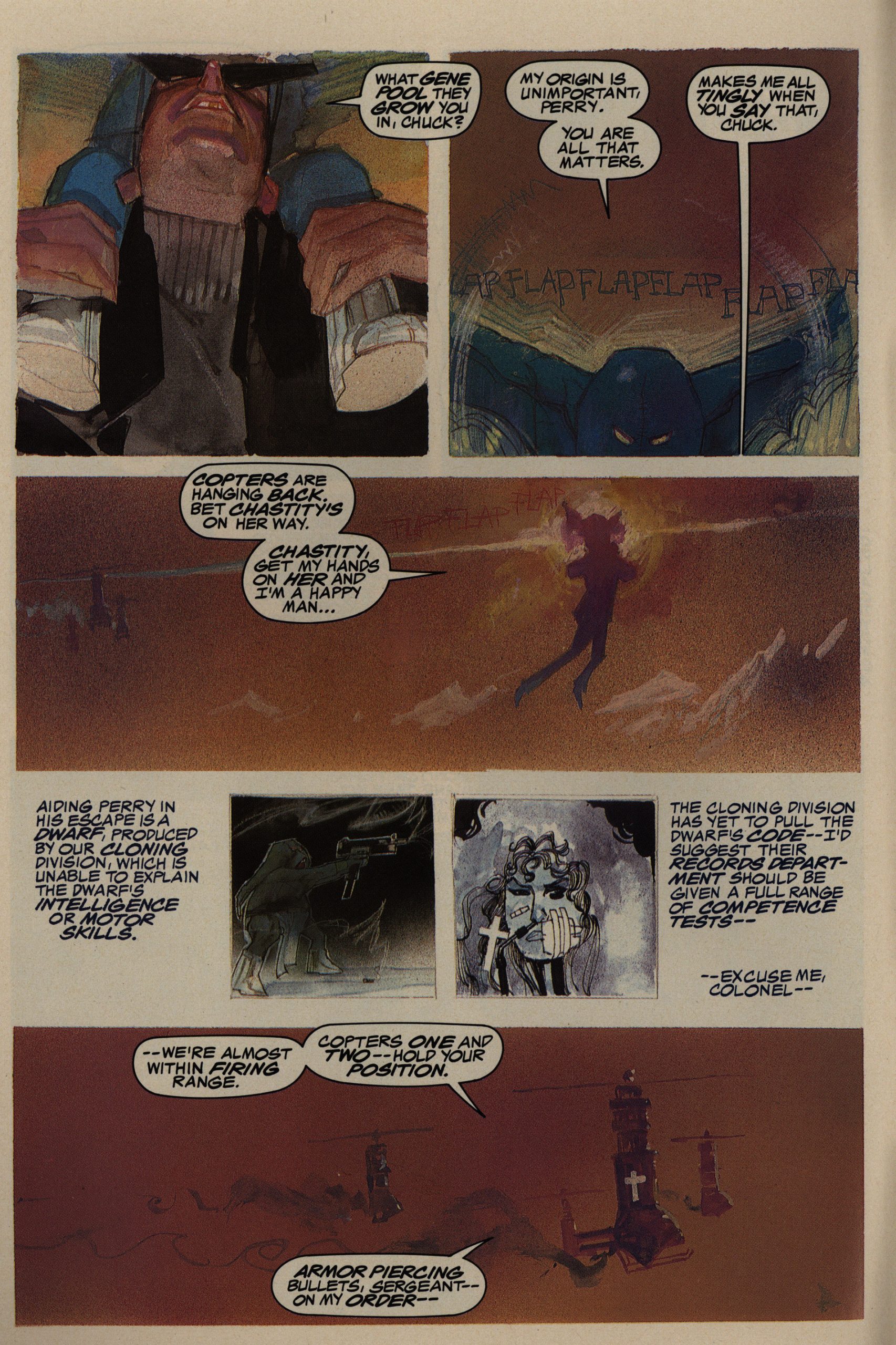 Because this is a pretty fun read. So many weird concepts pop up, and Miller is on top of the “let’s confuse everybody” storytelling technique. 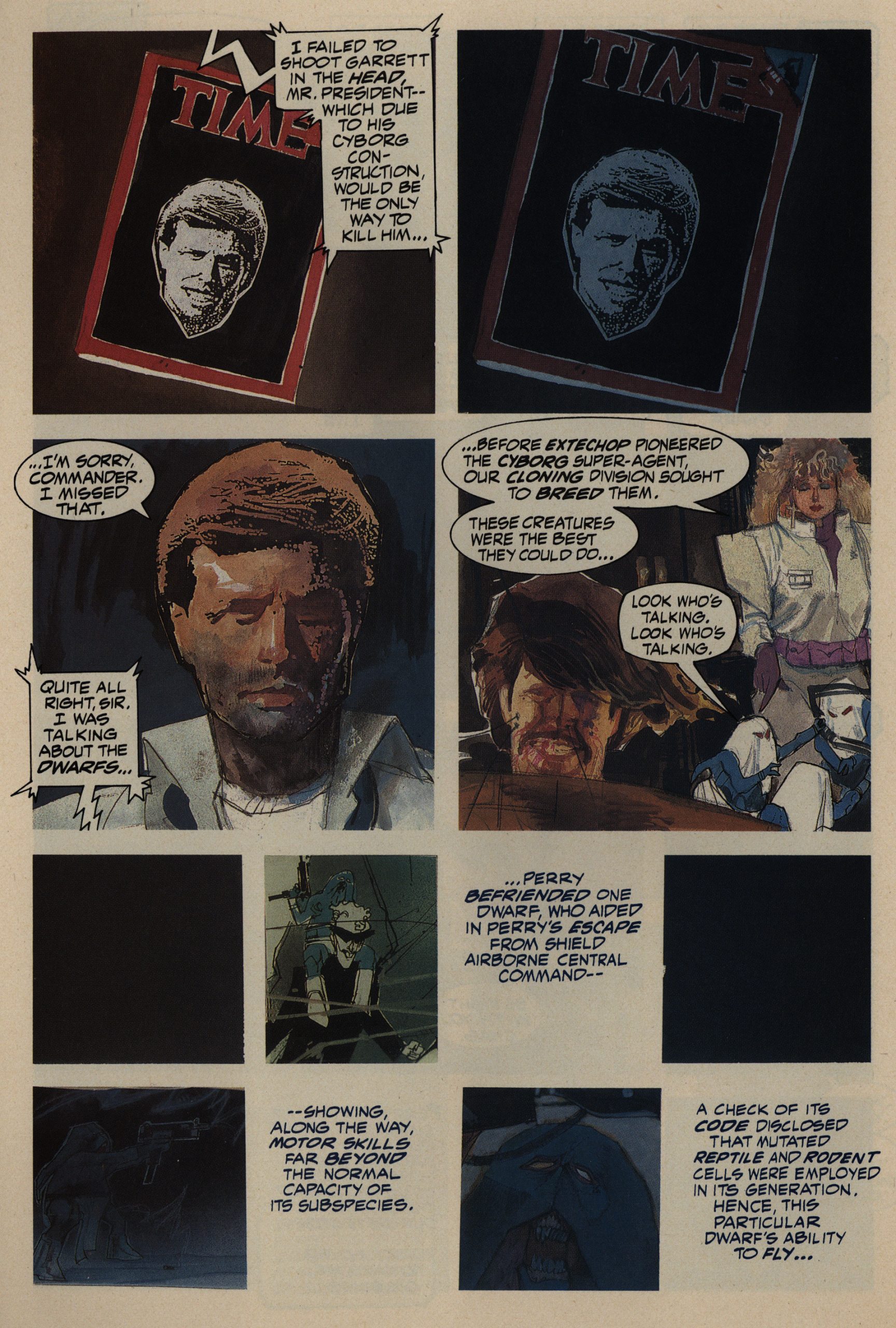 When we got to the final issue, the storytelling shifts around completely, and we get yet another recap, and I was all ready to be super-annoyed… but then it turned out they had a perfectly good reason for it all, and I almost laughed out loud at the final page.

So I don’t know… it’s a fun read, and the first few issues are really interesting from a storytelling point of view… but… It seems like it should add up to more than it does.

So what did the critics think?

Honesty dictates that I preface this
review with the admission that I
didn’t really understand all that hap-
pened in issue #1. Bear that in mind
as you read my comments.

Collaborating with Miller on the
series is Bill Sienkiewicz, who in-
vites controversy every time he picks
up a pen. Driven by his need to
escape from incessant comparisons
to Neal Adams and by his desire to
forge his own creative vision,
Sienkiewicz plunged into abstract
art—with results that shocked and
even repulsed many.
I am one ofthose who disliked the
work he did on New Mutants, feel-
ing it had the exact opposite effect
of that he intended. I think he and
I would both agree that much of the
slickly smooth, bland artwork so
prevalent in comics today has as a
side effect a distinct lifelessness.
Sienkiewicz sought to offset this
with an artistic style that would
fairly burst with life.
My opinion is that he went too far,
and merely created a different form
of sterility. By presenting people—
rather than their thoughts, dreams,
emotions—as the abstractions, Sien-
kiewicz stripped them of their
humanity just as surely as does the
hack who draws by rote. Bill doubt-
less has great fun dealing with form,
but too often I feel he loses sight of
substance.
Some of that absence of human-
ity is in evidence here. The more
abstractly portrayed scenes were, for
me, the least effective.
Large segments of the artwork,
however, border on the brilliant. I
feel very strongly that Sienkiewcz
will make his lasting mark in com-
ics with his painted, rather than pen-
cilled work. His use of color is
highly effective, diminished only in
those sequences presented in the
abstract. Had he relied more com-
pletely on the colors rather than the
pictures to convey the abstractions
presented in the story, it would have
been even more stunning. It is in-
teresting to note that both here and
in Dark Knight (with Lynn Varley),
Frank Miller has teamed with artists
who set new standards for comics
coloring.

Despite the violence and even hor-
ror to be found in Elektm: Assassin.
Miller and Sienkiewicz have both
referred to the series as a comedy,
with Sienkiewicz going so far as to
compare the early issues with Gar-
rett to Chuck Jones’s Roadrunner
cartoons. Told of Sienkiewicz’s com-
parison, Miller laughs and says,
“There’s a certain part of the story,
issues two and three in particular.
in which Elektra and Garrett do very
much play Roadrunner and Wile E.
Coyote.”

From the outset, there was no effort to
make the series at all balatable to anyone
who didn’t want to think. Issue in fact,
was the most complicated of the eight
chapters, dealing not so much with Elektra
in an asylum as with the process she uses
to rediscover her sanity. Her method of reex-
amining pieces of her memory was that
rarest of things in comics:.a perfectly appro-
priate way to introduce the character and
get important background details across.
The script throughout the series sparkled
with everything from tiny, glittering facets
(Garrett saying his ears still hadn’t popped
on the helicarrier, or that he has the phone
number of the San Concepcion voter
registration office) to the glare Of Agent
Perry’s sadistic wit (such as when he
decapitates an agent on the excuse that he
had once reported Perry for taking an extra
pieceof key lime pie).

Sienkiewicz’s contribution is
especially significant. Working in
an array of different styles and with
a variety of media (including
watercolor, colored pencil ,
photocopy, zip-a-tone screens, and
acrylic), he gives his Ralph Stead-
man influence full sway, and it’S a
dazzling performance. I’ve never
seen anything like it before; it’s
breathtakingly audacious, a tour de
force. And it firmly establishes
Sienkiewicz as one of the wittiest
cartoonists ever to work in this
medium. His highly exaggerated
style works best when detailing
Garrett’s Dickensian scale. The
panels of him lying on his bed like
a beached whale, watching televi-
Sion in his S.H.I.E.L.D. under-
wear, or incredulously, reaching
into his jacket for a gun that is no
longer there are pricelessly funny.
And the valentine cover to issue #4
has to be some kind of landmark
of hip hilarity.

Despite his belief that pub•
lishers should not be prevented
from publishing What they Wish.
Saunders cited Frank Miller’s
Elektra: Assassin series as real
good example Of la comic) just
being too negative all the way
around

The report, which aired on
W USA’s Eyewitness News at six
o’clock and II o•clock on the
successive nights. had a role in
triggering a letter from Steve
Geppi. president Of Diamond
Comic Distributors. encouraging
retailers to voice concerns about
objectionable material in comics
to publishers Isee story. page 121
and was cited by one retailer.
Buddy Saunders Of Lonc Star
Comics. in his announcement of
an Age Appropriate Policy for
comic buyers I

Assassin was singled out as a
comic considered objectionable by
some. and panels and covers from
the series were shown, In des-
cribing the plot Of Elektra:
Van Ryan said that
“IElektral is raped by her father
at the age of five. committed to
an asylum. escapes. and then
murders several secret agents and
two ambassadors with her super-
human powers, Liquor flows and
blood drips,”
(Frank Miller. writer Of
Elektra: Assassin. pointed out
that. in actuality, the rape uas
something Elektra “thought had
happened. Ibut Wasl not some-
thing that had happened.” The
rest of Van Ryao•s description, he
said. was “fairly accurate.”

Elektra: Assassin has been continuously in print for decades. Here’s a recentish review:

Even in its more coherent moments, Assassin is psychedelic, with one foot in reality and the other firmly rooted in the psyches of Elektra and Garrett—which is really how you end up not caring a jot about the plot, and instead focus on the commentary Miller provides about his chosen topics.

Where it falters is that it does so by embracing these same ugly aspects. Characters constantly use homophobic slurs and women are treated as less than objects. One character realizes he wants to sleep with Elektra while holding a gun to her head. Elektra is hinted to have had a strong Oedipal complex, and then turns around encourages the characters around her to speak of her in degrading tones, as though she wishes to be subjugated. Characters try to draw attention to how ridiculous the plot is by pointing it out aloud. Again, there’s a character named Vladimir Jakoff. It’s an ugly, mean-spirited mess.