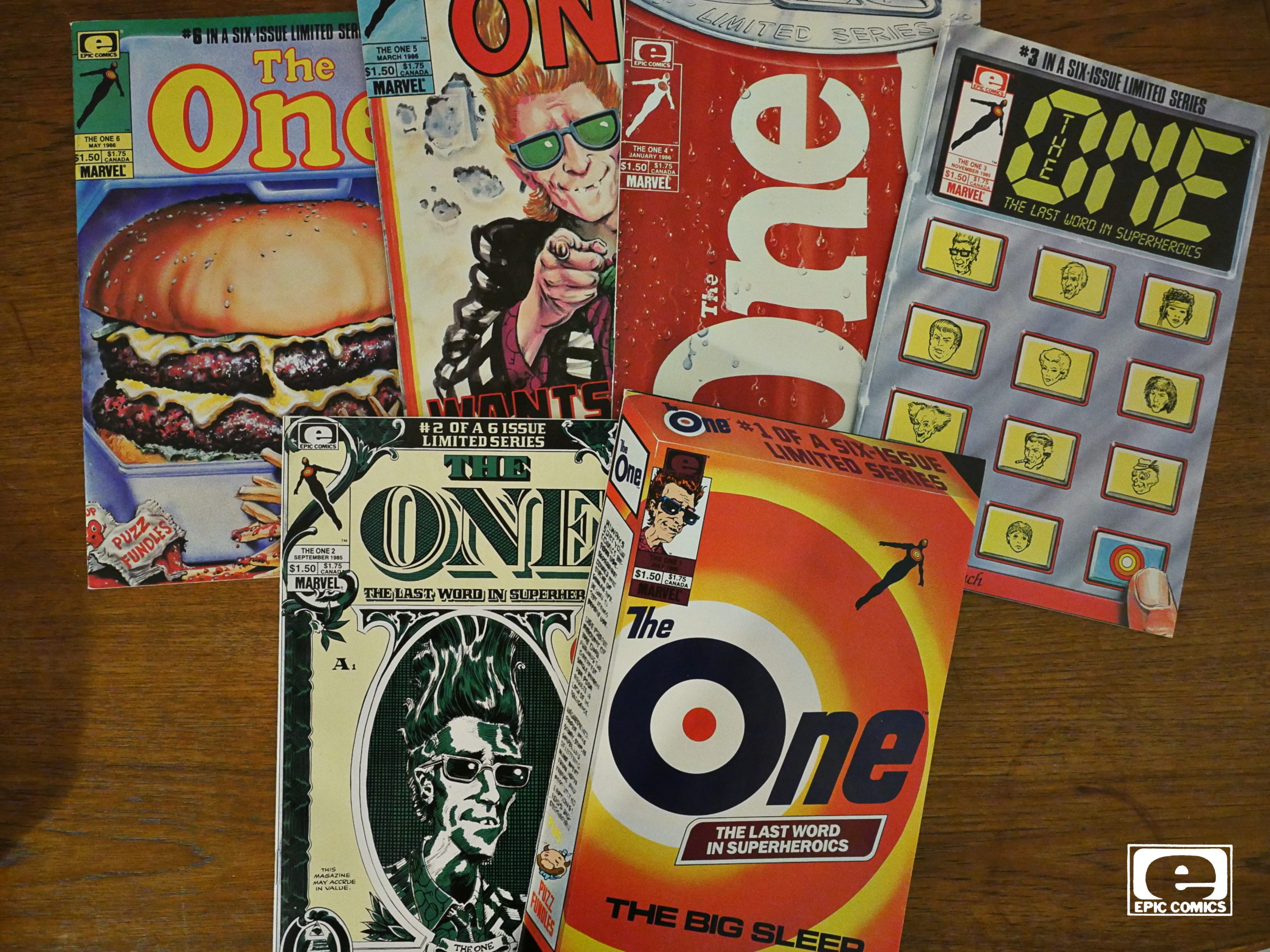 I did read this one as a teenager, but I remember absolutely nothing about it except that I thought it was pretty neat. Veitch later worked some with Alan Moore and did … er … Superbrats? And a bunch of other revisionist super-hero comics (i.e., where the super-heroes are vile monsters). And this series is subtitled “The Last Word in Superheroics”, so was Veitch doing Watchmen before Watchmen? 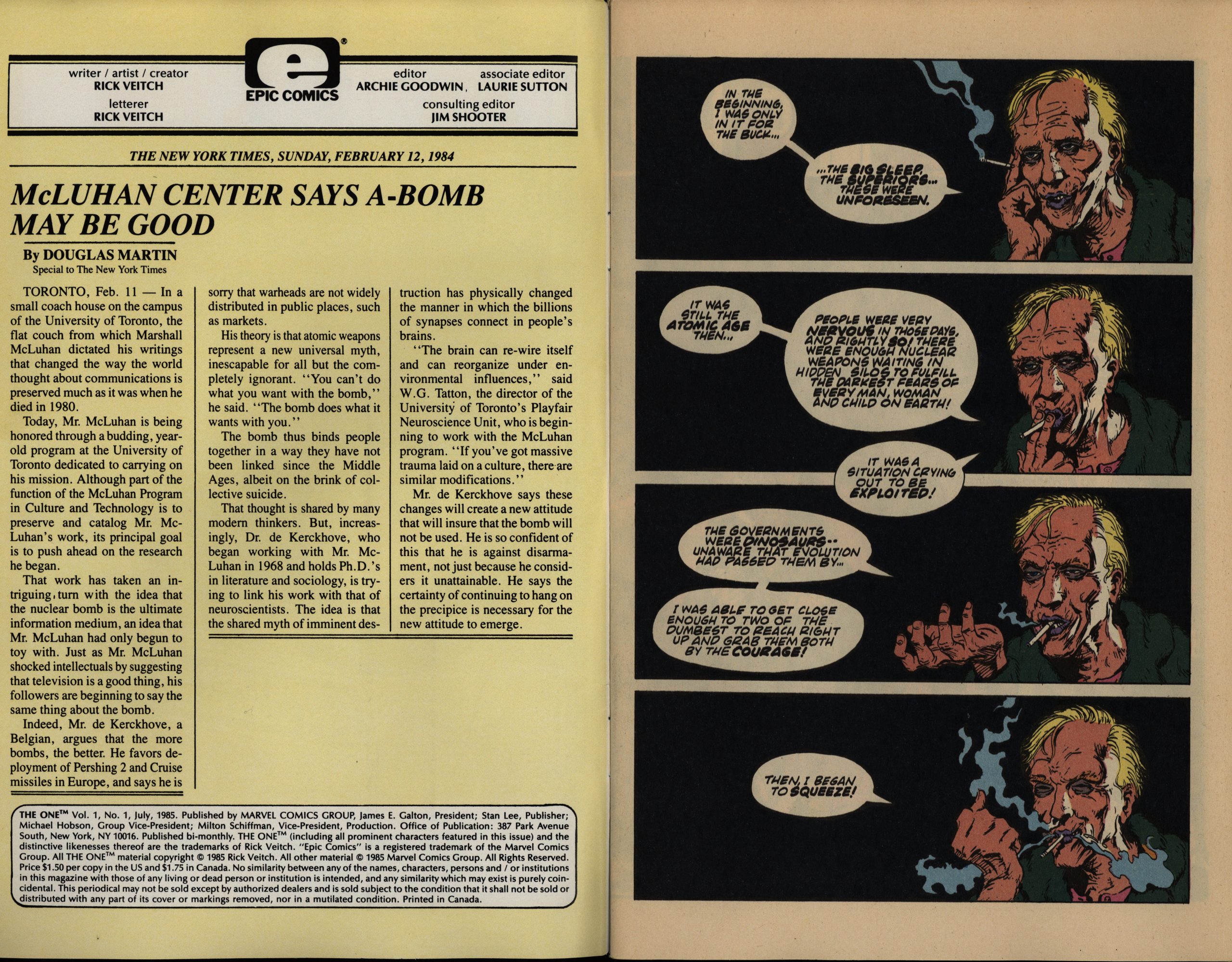 *gasp* It sure looks like it! We’ve got fake newspaper articles and what looks like is going to be an “oral history” sort of framing, with a mad genius billionaire planning to radically change the world by staging a fake disaster (here, a fake war between the US and the Soviet Union to get rich; in Watchmen it’s a fake alien to make the US and the Soviet Union come together). Hey! It’s totally the same thing! And Veitch did it first…

Except… That fake New York Times article turns out to be real?

And then instead of getting interesting storytelling choices, beyond the oral history thing, we’re back to the old tried-and-true-and-oh-so-tired “having characters willy-nilly just state their plans to the air”. 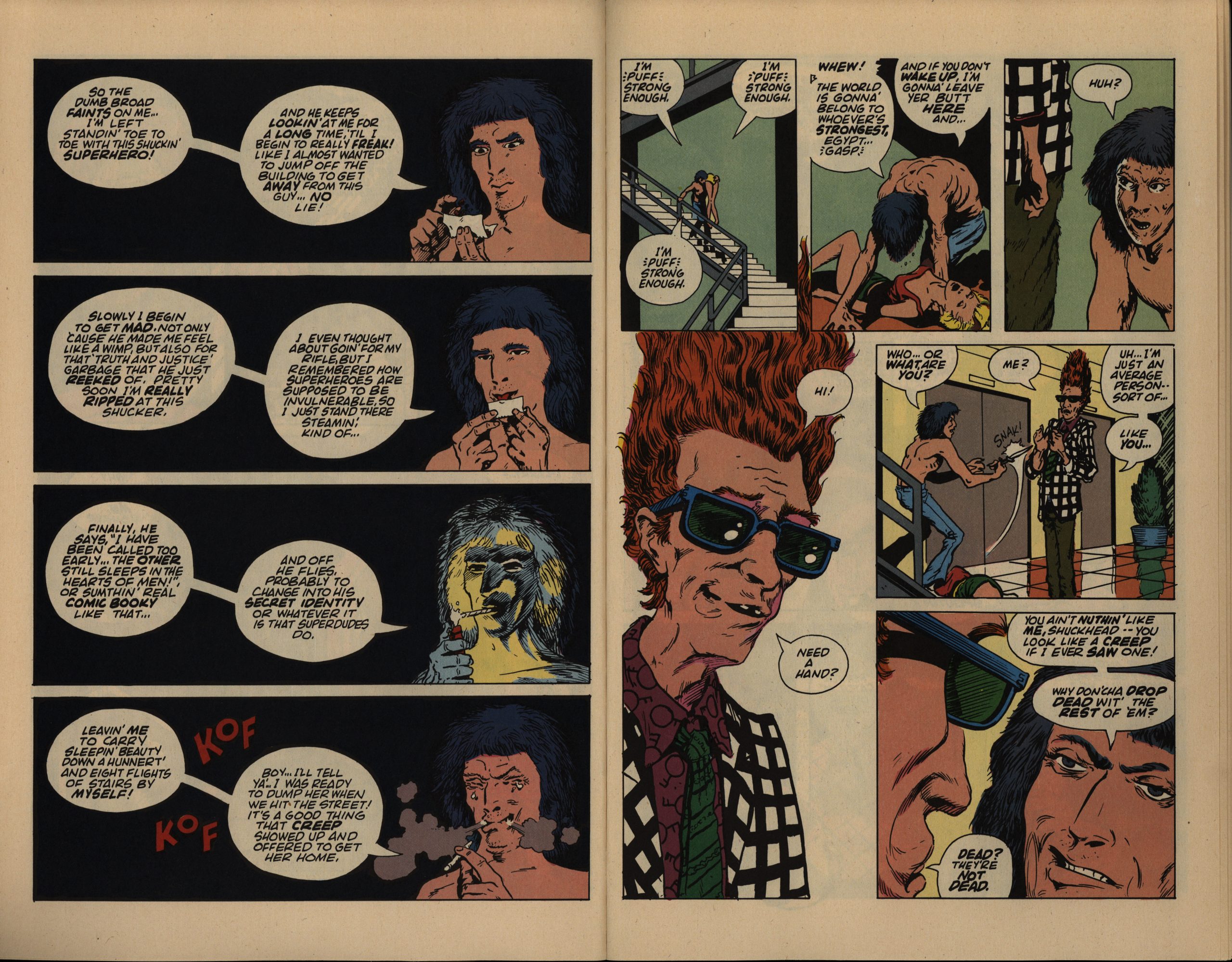 Basically, the only interesting story-telling device Veitch uses is the four-horizontal-panel-oral-history thing. OK, perhaps this isn’t Watchmen before Watchmen after all. 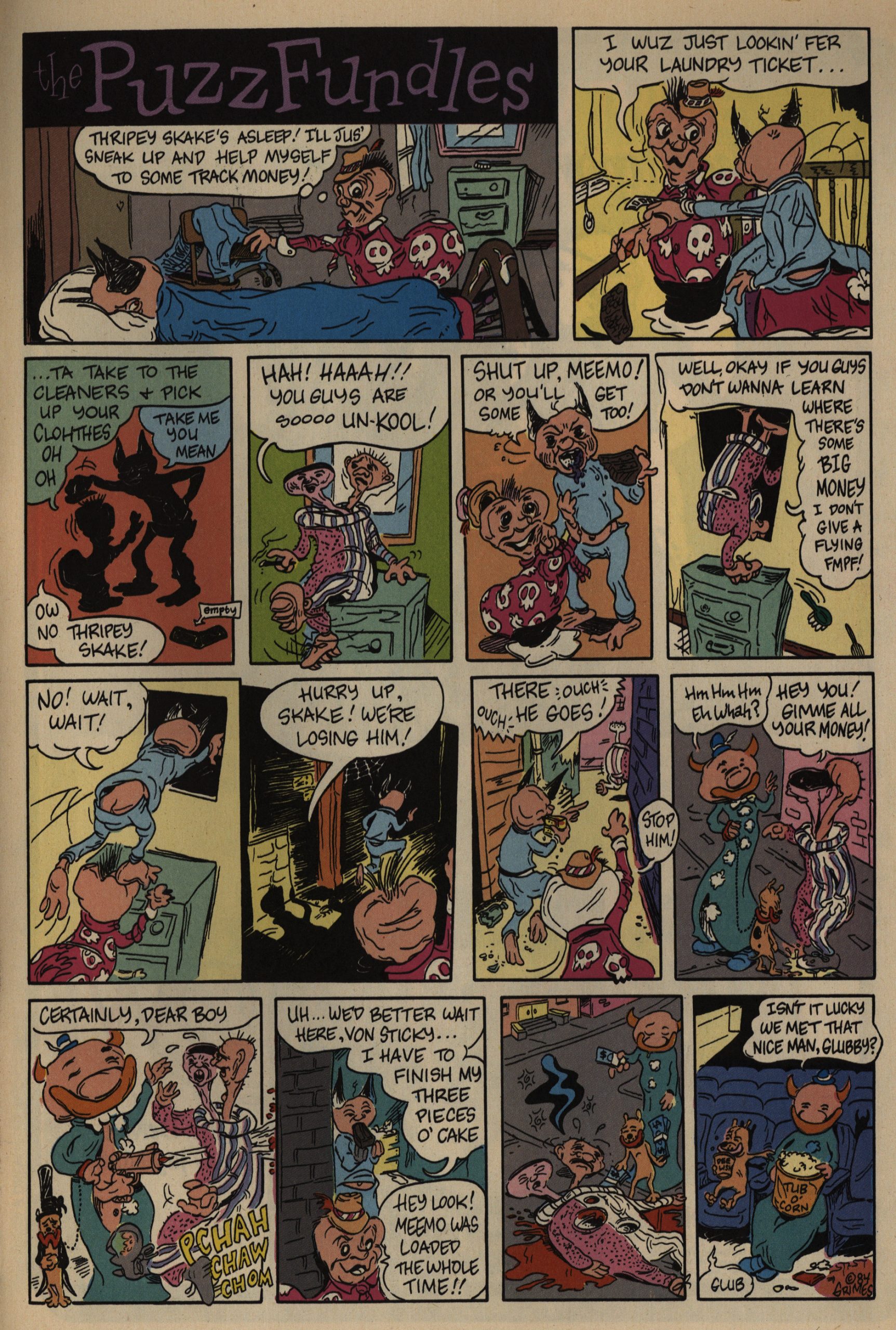 We get one page of The Puzz Fundles by Rick Grimes per issue. I assume this is Veitch himself in a very different art style? It’s impossible to google since there’s a character in The Walking Dead with the same name. Hm… This seems to imply that he’s not Veitch, but it’s from a Veitch page, so who knows.

None of the one-page strips are particularly rewarding. 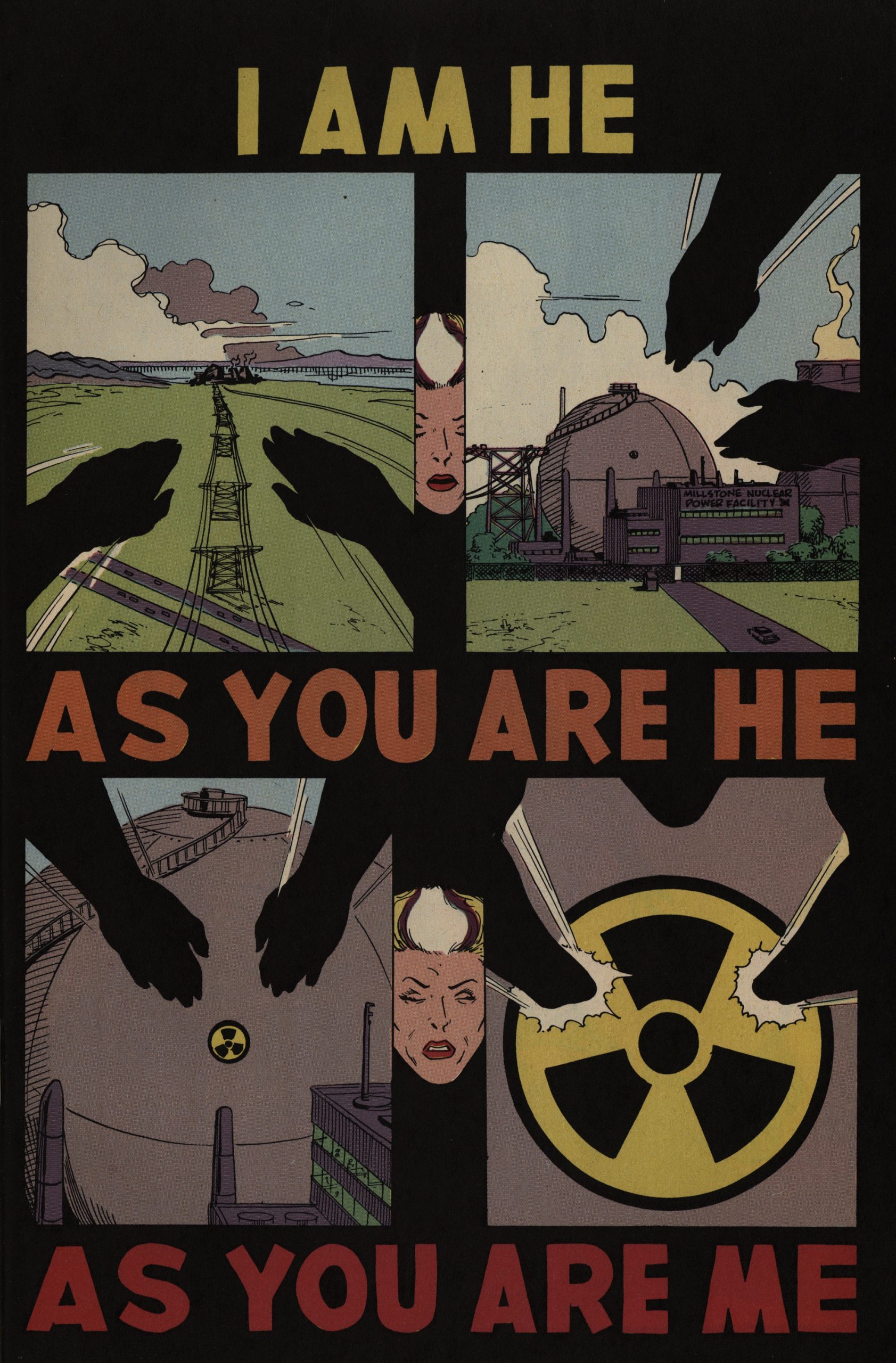 The Watchmen TV series ended with I Am The Walrus… and here Veitch references it, too. Did the Watchmen showrunners read The One? 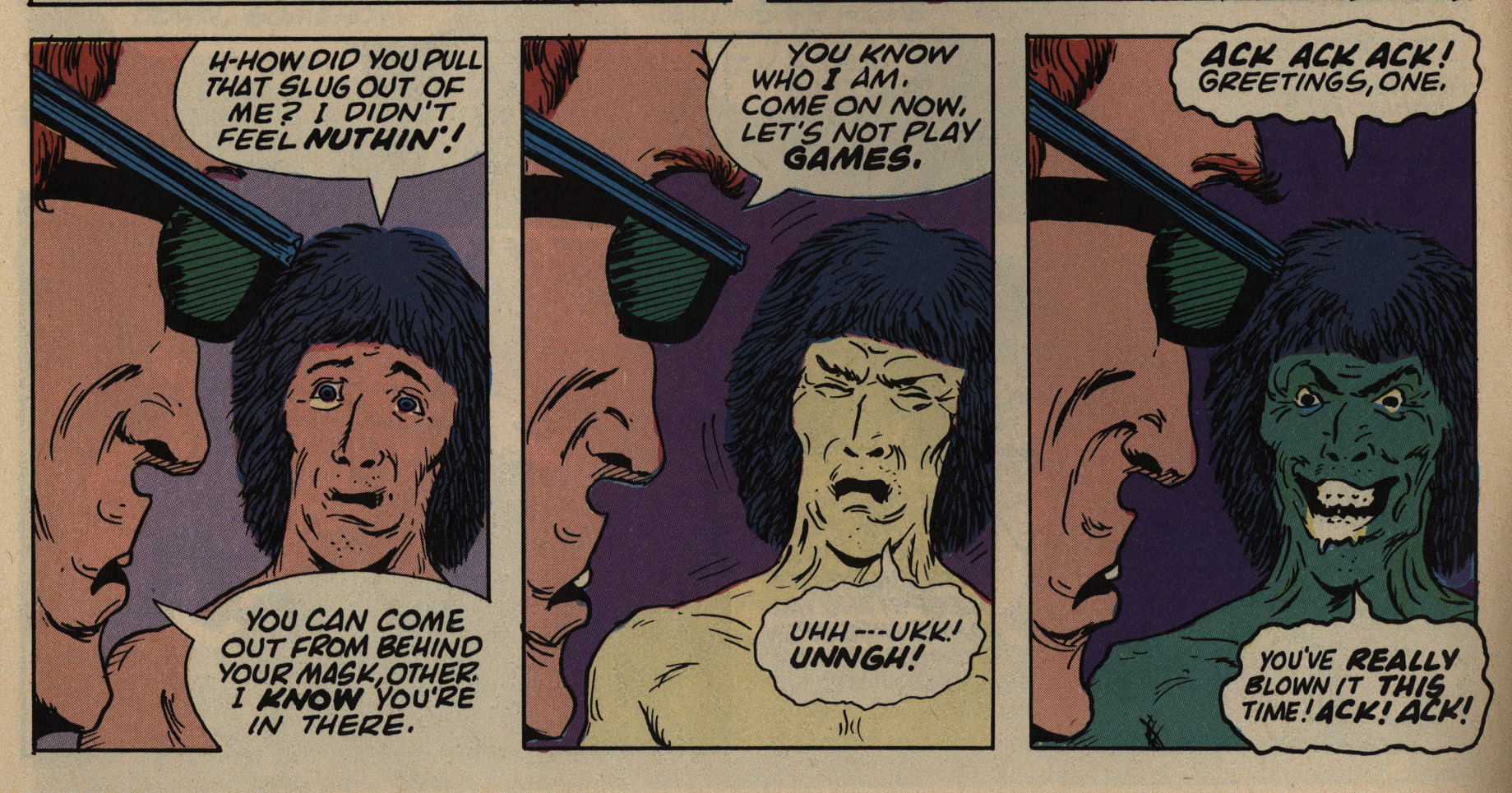 The plot here is more reminiscent of Veitch’s serial in Epic Illustrated, Arbaxas and the Earthman than anything else. It’s about mystical forces and stuff, personified in “The One” and “The Other”. It’s kinda dire. 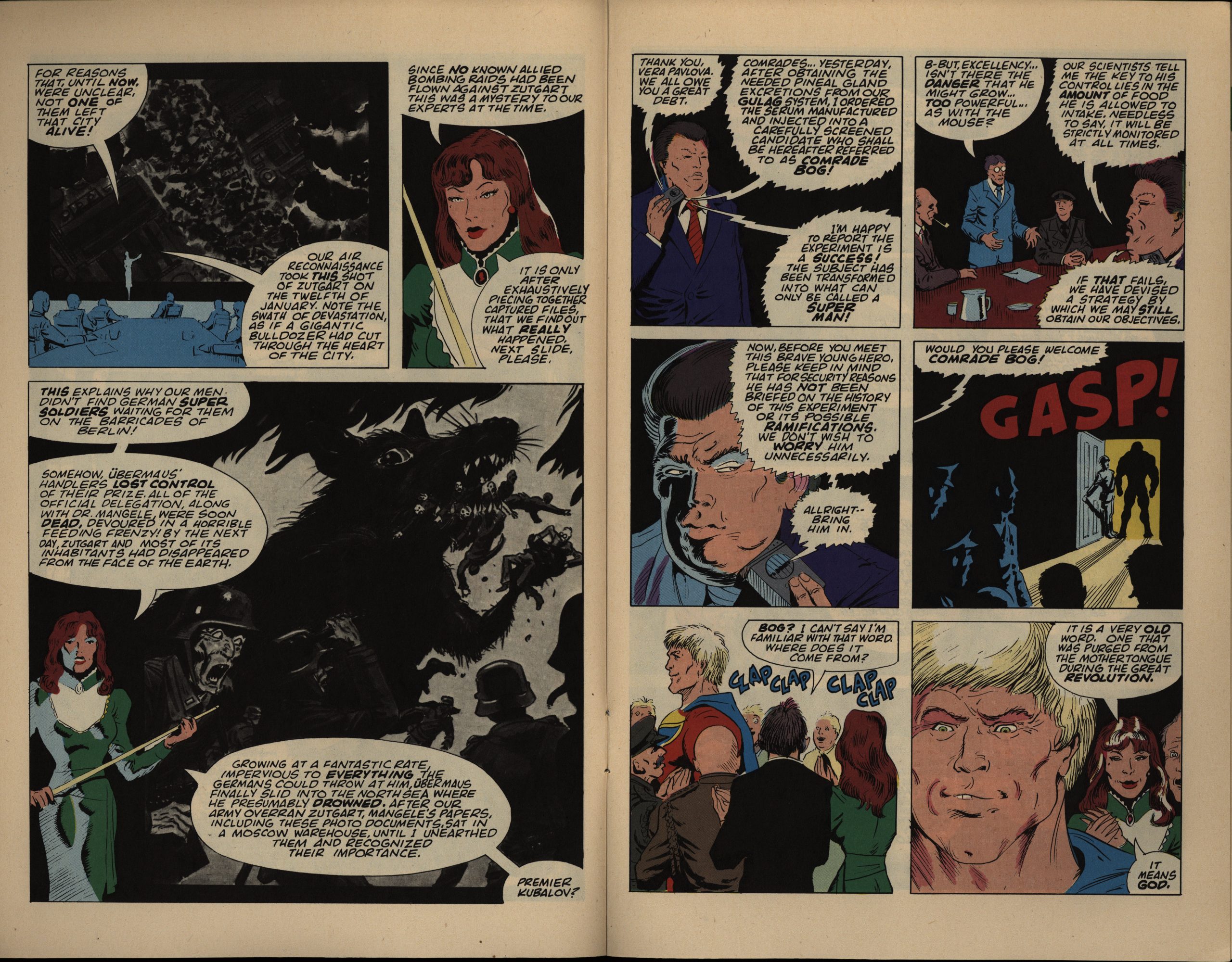 There’s so many pages like this: Way too much exposition about concepts that really don’t need this much explanation. Yes, a German übermench serum; a big rat; a Soviet super-hero. I wonder whether Veitch meant for these sequences to be funny, and I guess you can read them as parodies of the genre. I mean, with the “GASP!” and all. But is it actually funny? 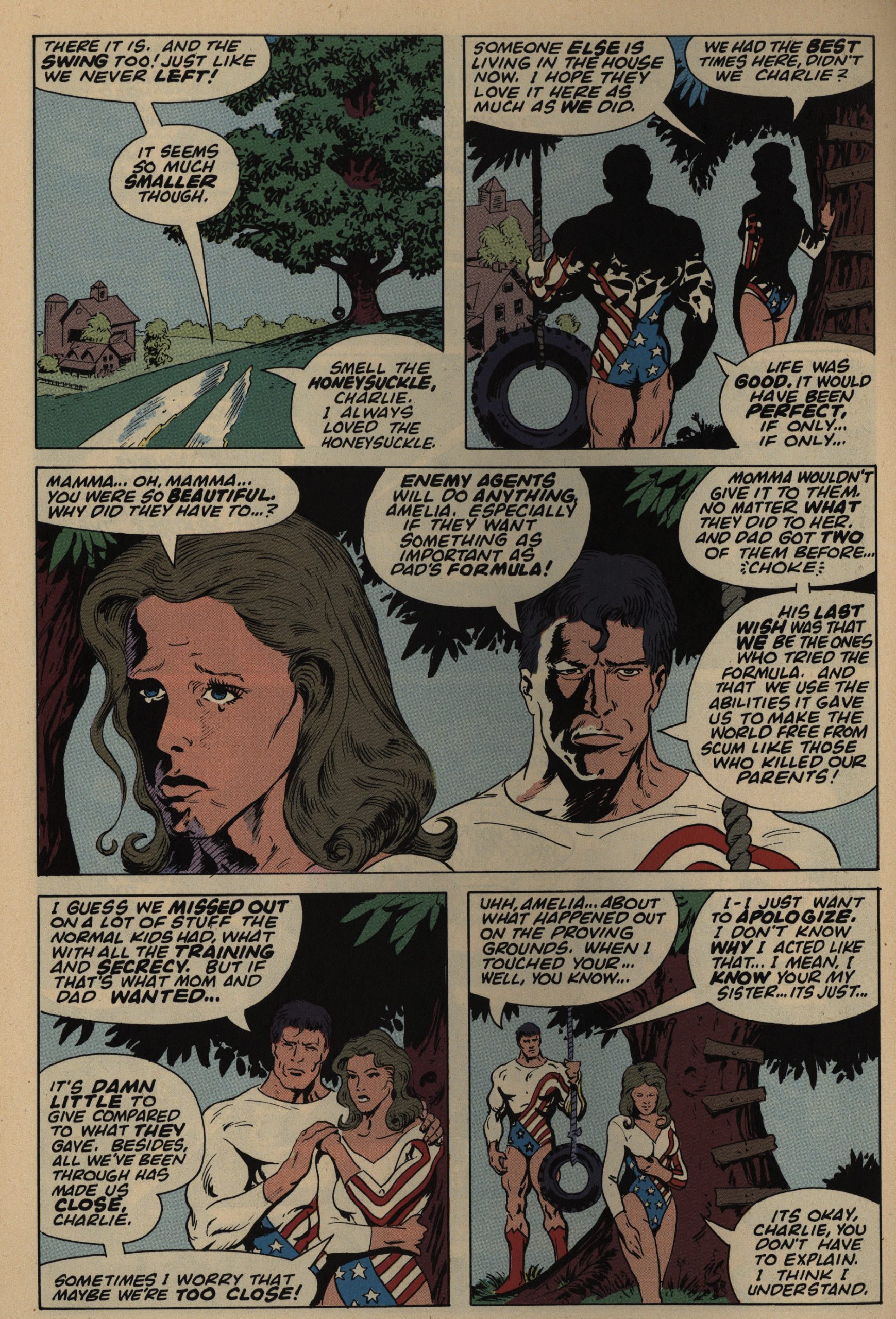 Yes, it turns out they were brainwashed into believing all that, but was a side effect of the brain washing that they would compulsively recap their backstory to each other? Inquiring minds want to know.

(And, yes, of course they want to fuck each other.) 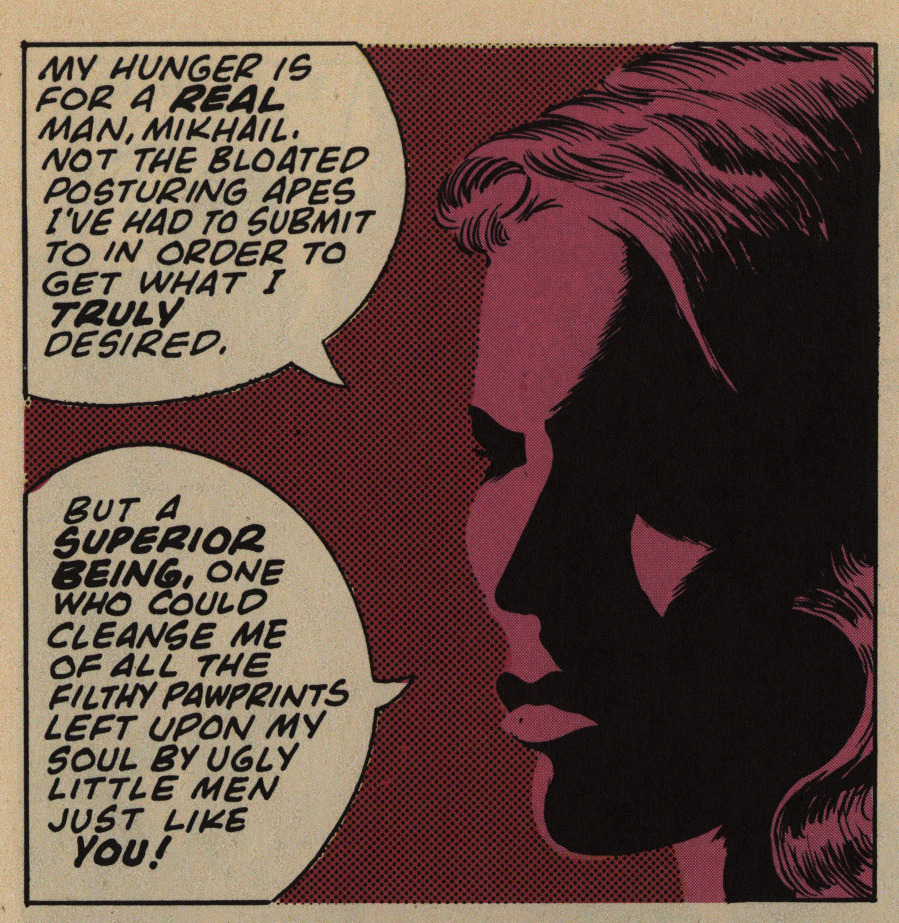 That’s also the motivation behind the Russian super-soldier: The scientist behind him wanted to create a real man. To have sex with. 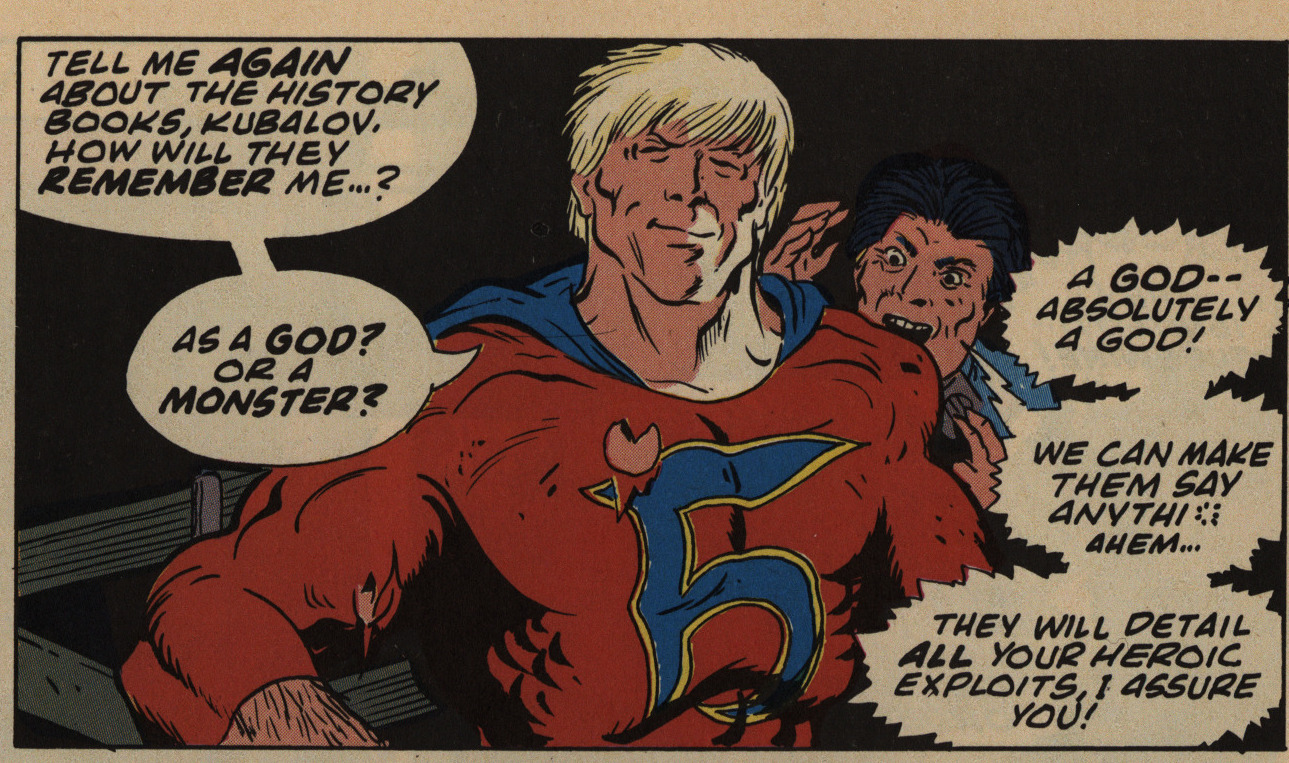 Perhaps Veitch’s sense of humour is perpendicular to mine. I mean, I like a good oops-I-misspoke gag as well as the next person, but the timing seems leaden and tiresome. 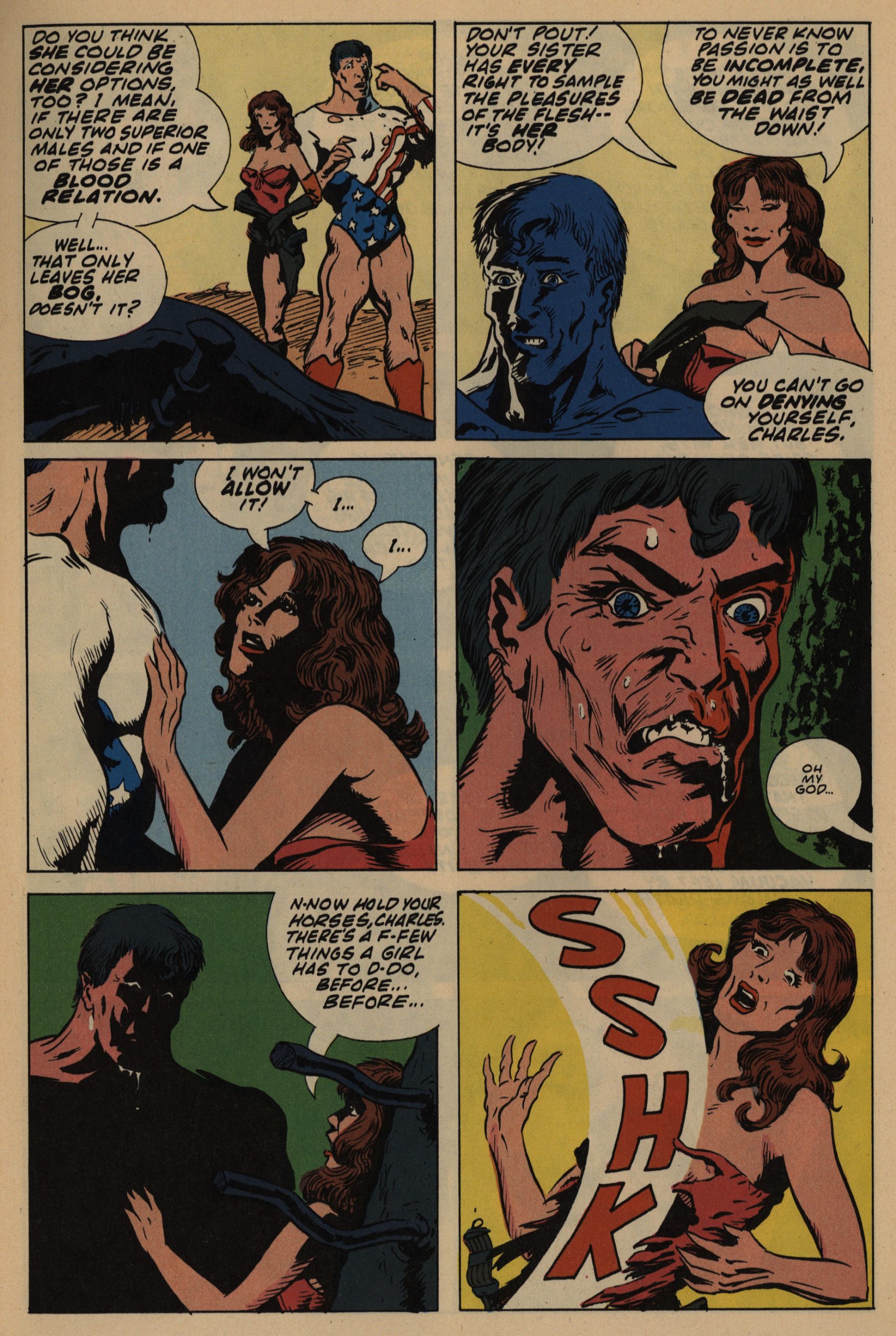 The Russian scientist gets raped by the American super-hero. 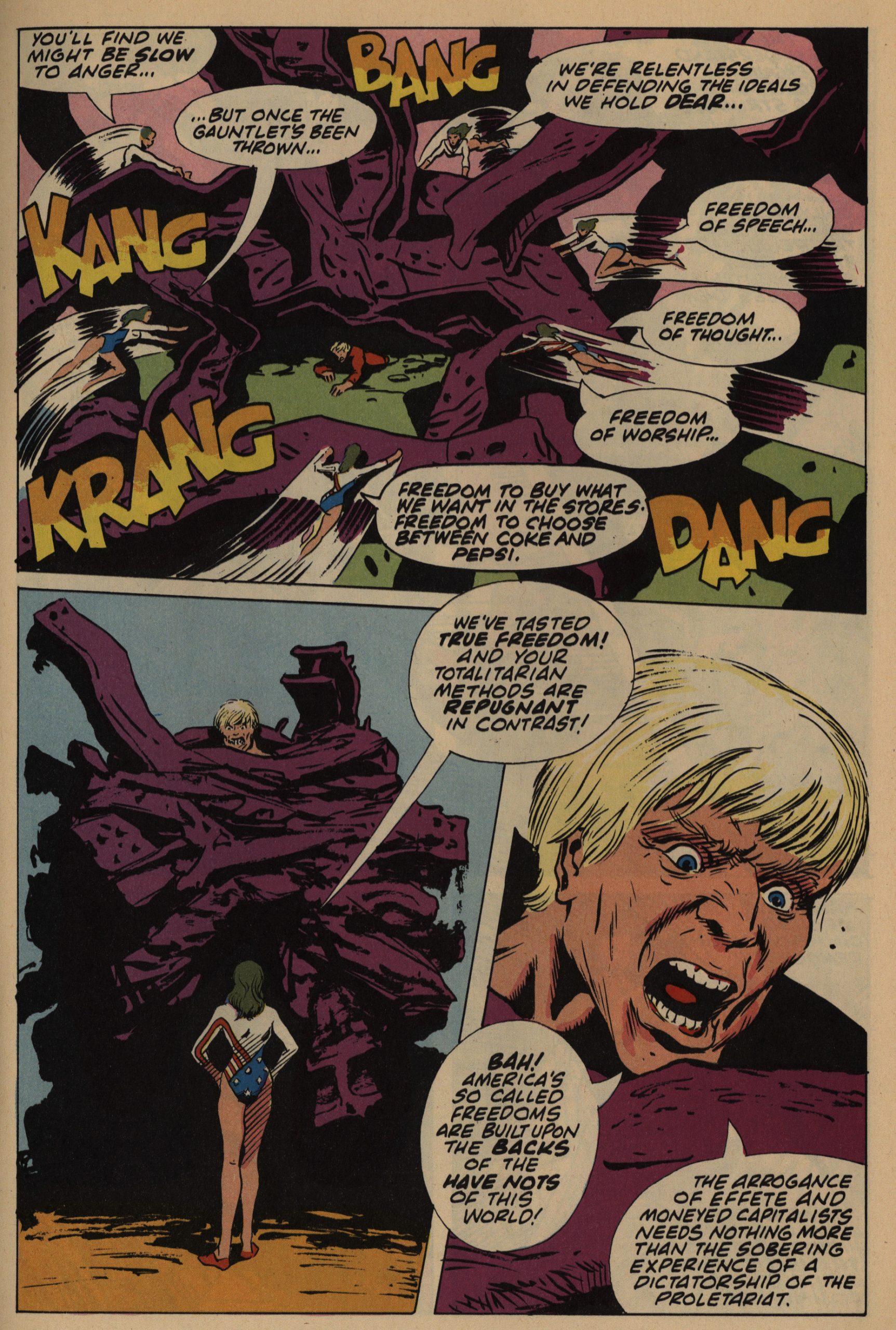 At least we get a good political discussion. It turns out that the US is better than the CCCP. 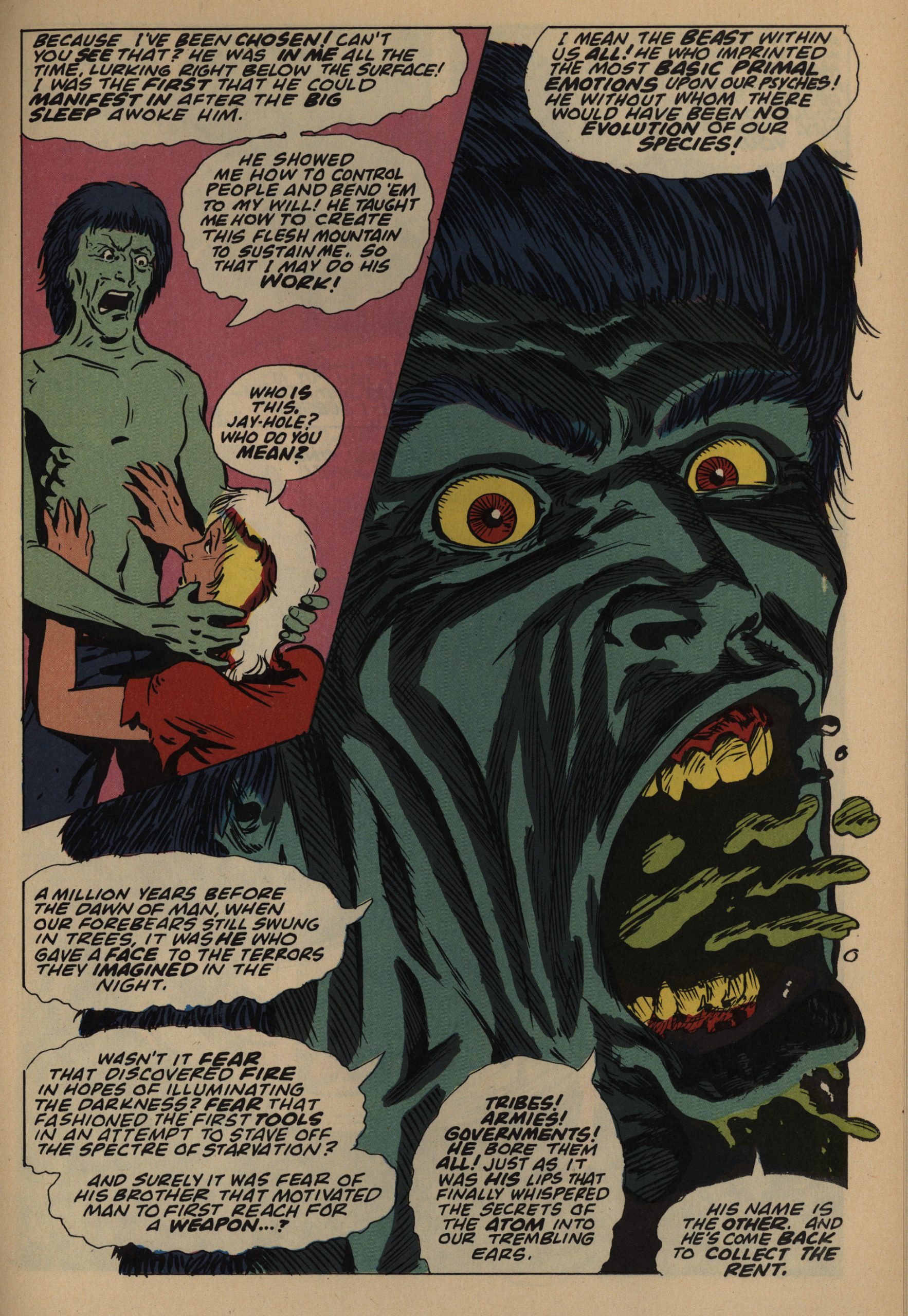 OK, that’s a drawing I liked. But it looks really reminiscent of something or other. Hm.

As the issues went on, these “oral history” bits started to make less and less sense, plot-wise. The main story takes place apparently within a day or so, but the mad rich billionaire has time to command people into making a space shuttle getaway for him within that period of time. And we only get to see the two super-beings fight each other in New York, but that was enough to rupture the entire planet for some reason or other?

And Veitch also kinda breaks the narrative logic of having these bits by having most of the people doing them (who seem to be talking from a much later time) being killed off in the story. So these are… what they’d be telling us if they’d be telling us something at the time?

I guess you shouldn’t really be thinking too much about these things.

(It turns out she liked the rape.) 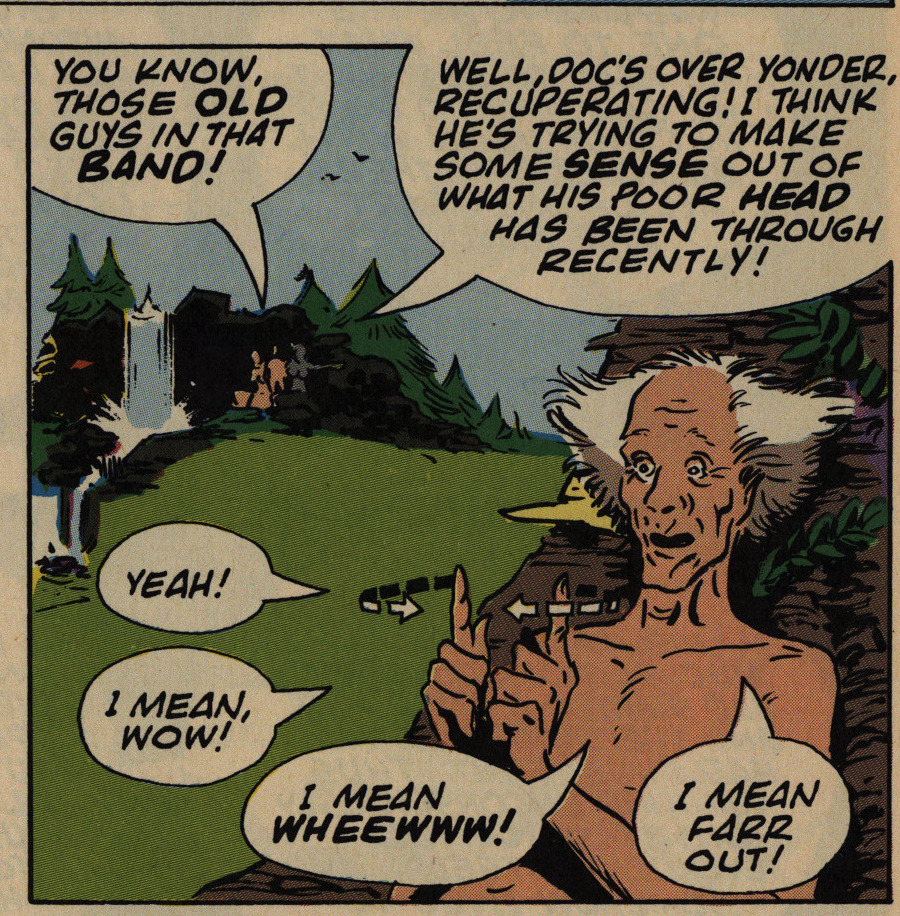 One of the surviving characters sums up the storyline.

I was really surprised at how unimpressed I was by this book. I like Veitch; I’ve bought just about everything he’s made since The One, but I didn’t remember just how half-assed The One is. It’s really a 70s comic with some 80s sheen.

On a positive note, despite being drenched in verbiage, it does read quite well. It’s pretty brisk.

AH: Can you tell everyone unfamiliar
with it a little about it?
VEITCH•. The One was my attempt
at the revisionist super-hero. This was
in 1984-85, I believe. Alan Moore’s
Marvelman had just come out and we
were just getting it in the States in
Bårrior magazine. I read it and it hit
me while reading it that the super-hero
was a viable idea. It was a viable ve-
hicle with which to express yourself.
Even in the early ’80s a lot of peo-
ple were down on super-heroes be-
cause there werejust so many of them.
It’s like the person who eats too many
McDonald’s hamburgers never wants
to eat another hamburger no matter
who cooks it. But you can look at
super-heroes from a different point of
view. Not from the point of view of
somebody who’s consumed too many
of them, but like a child! We have a
lot going on there in terms of arche-
type and meaningfulness to society.
The thing that was going through
my mind at the time I did The One
was World War Ill. I don’t know if you
remember back then; Reagan was in
the White House•and everything had
become quite confrontational between
the United States and Russia.
AH: When Reagan first became Presi-
dent, I was certain we were talking
wur here;
vE11tH: Everybody was. It just
seemed like they were pushing it too
far with this insane brinksmanship. If
you read The One, you’ll see that the
bomb is like this underlying character
in the whole thing. In fact, World War
Ill is what creates the One out of the
collective unconscious of the human
race. And that’s only the first issue;
[laughs] it gets even bigger from there.
I’m really happy to report all those
tensions between Russia and America
have evaporated and people aren’t as
about it anymore. At the time,
it seemed very real and it definitely
became part of the mix that was The
One.

Finding contemporary reviews is proving difficult, but here’s a new one:

It hits many of the same beats as Watchmen: Cold War focus, alternative history, and the implication that superhumans would be more danger than boon.

By contrast, The One is far more snide and cynical with its allegory. Its tone shows an open disdain for its targets while almost reveling in its own dystopian plot. The One aims to come off as trashy and pulpy while enjoying every minute of it.

IDW did a serial reprint:

Is this a good comic? Heck, yes, it’s a bit dated, being a product of the 80’s, and all, but there are elements that are timeless. Hackers, military cold war, friction with Russia, the birth of new superheroes, these aspects could have been created in 2018.

And Veitch’ own King Hell published a complete edition.

Here’s one that’s all about Veitch:

They’re the best 10 pages of a superhero fight I’ve ever read, truth be told, which is why I was disappointed by their lack. They’re powerful, they’re perfectly paced, they’re violent as all hell and I haven’t found any better comic book fight scenes to this day.