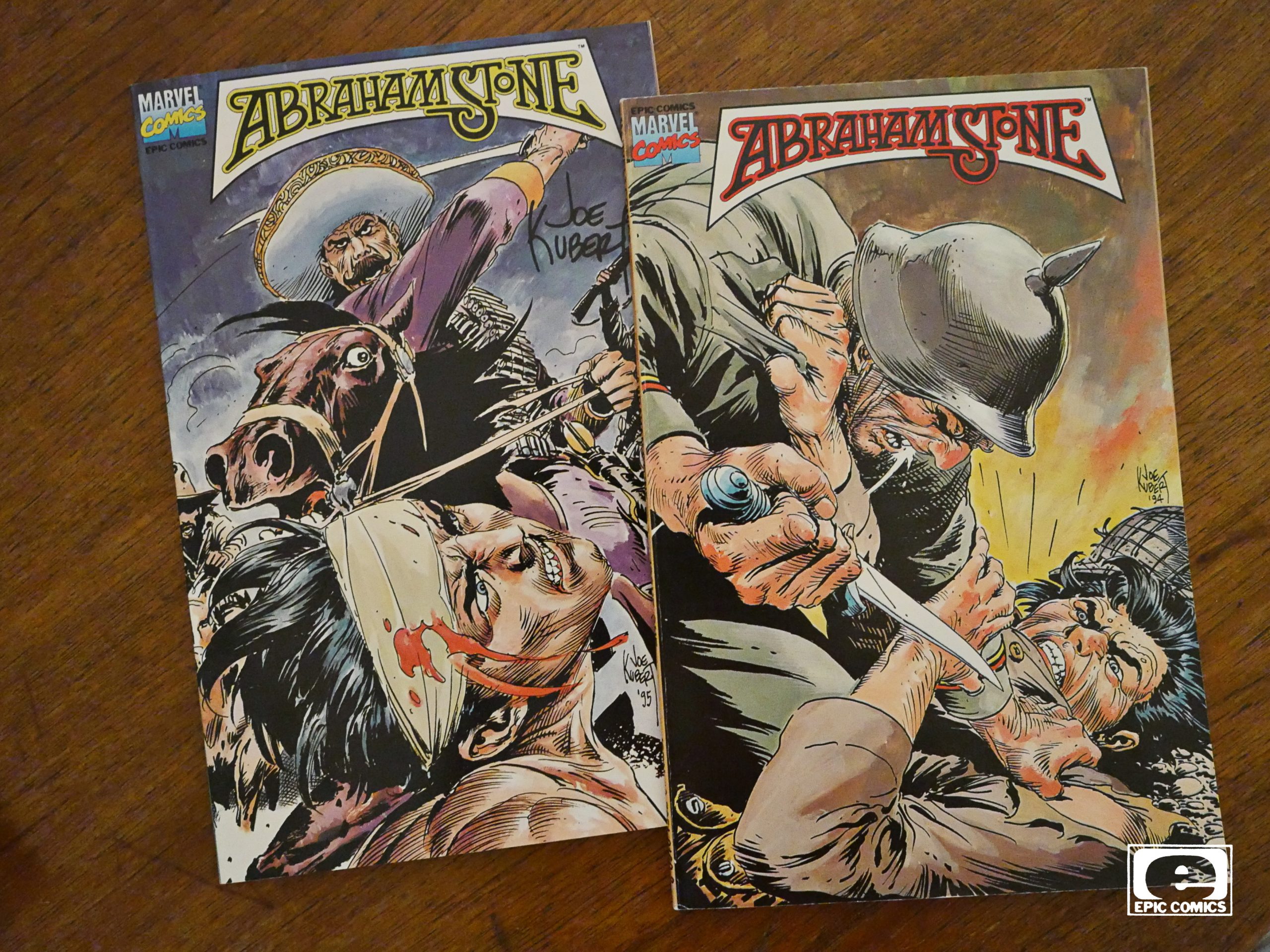 What!? But I said in the previous blog post that Epic was over and done with? Haha! Only sorta. The nightmare continues for at least another half-dozen blog posts.

Just kidding. I love me some Epic. So what’s this then? Epic had been shuttered for six months when this was published in July 1995 (if I have my time-line right, the final issue of Groo was published in January 1995, and was the last thing before this thing).

Oh, right; there was also Akira:

A subsequent comic-book sales bust, however, prompted Marvel to end Epic in 1994.[citation needed] In late 1995, the line was temporarily brought back to complete the reprinting of the Akira manga. Epic was ended again when that series was completed in early 1996.

Epic had published a Tor series from Kubert in 1993 in magazine size, and Abraham Stone was obviously also drawn for that format (look at the aspect ratio above). So why publish this in normal US comic book size (in “prestige format”) instead of an album, say?

The artwork looks really attractive, and would probably have looked even better in the slightly larger format. The lines here look a bit more spindly than Kubert’s normal hefty linework… 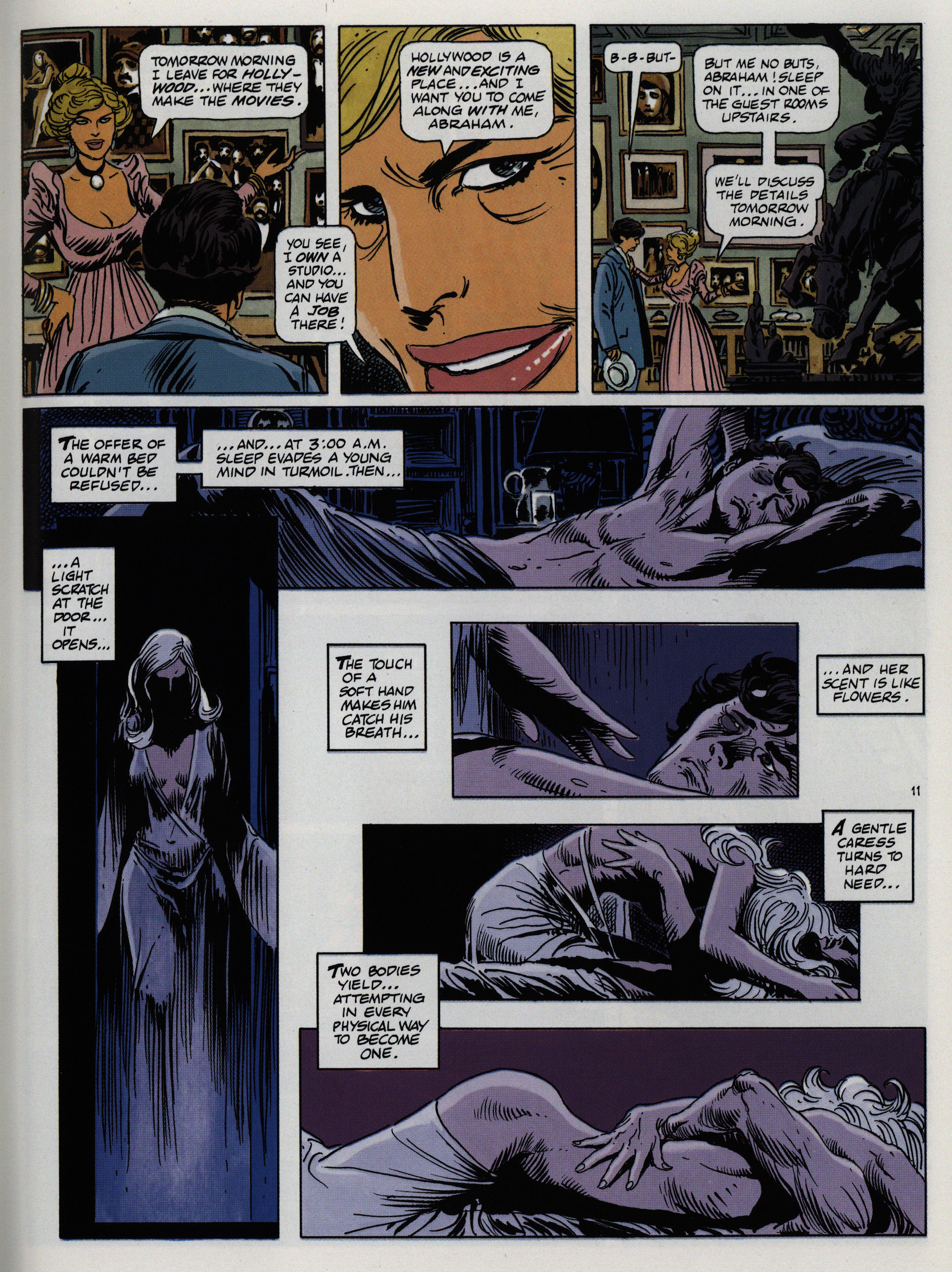 … and… well, I would really have guessed that this was Kubert at all. I’m used to reading his war and barbarian stuff; not all these nice interiors and sensitive figures. If presented to me out of the blue, I would have guessed that it was some Italian cartoonist I didn’t know about. 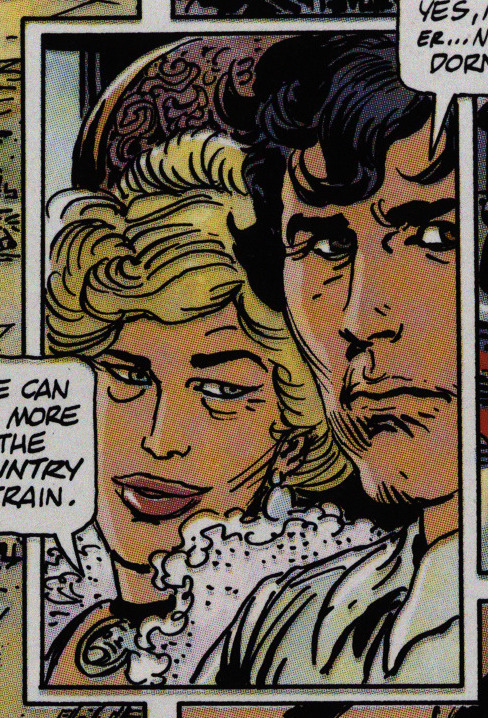 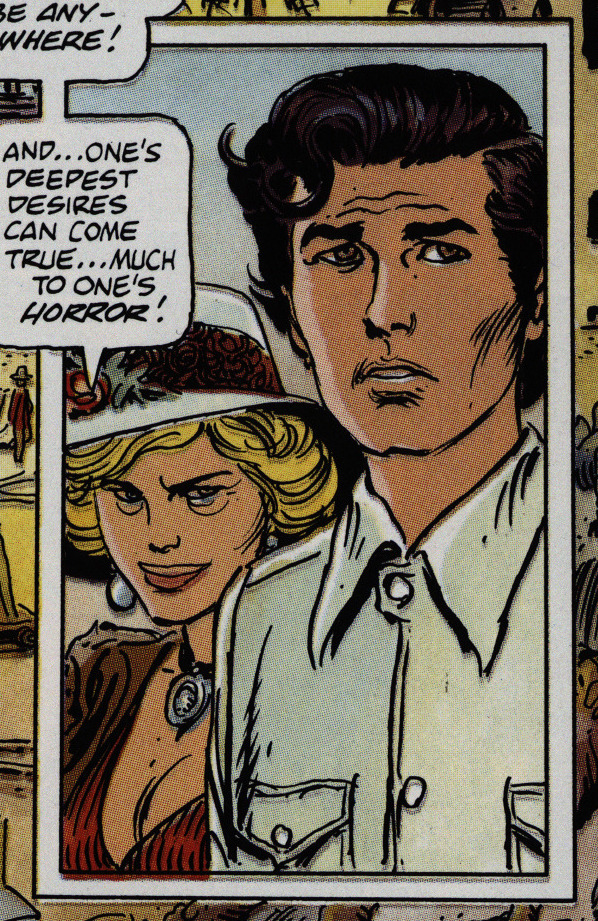 … more than a handful of Italian cartoonists do, for some reason or other. (The looking to the left out of the panel thing.)

Did Kubert have an Italian doing the layouts or something? I’m no Kubert expert; perhaps he just does that all the time. Anyway, the story here isn’t really er much? Abraham goes to Hollywood and discovers that it’s all corrupt and stuff (the (female) studio head wants to make an anti-German war so that the US will enter the European War (i.e., it’s 1914) *gasp* The outrage!) so he leaves. The end.

Somehow this is an enjoyable read — I think it’s because the storytelling just flows so well? All of these pages just … work. Setting the story in Hollywood also gives Kubert an opportunity to do a WWI page here, a western page here, and whatever he wants to draw, really, and that’s fun. 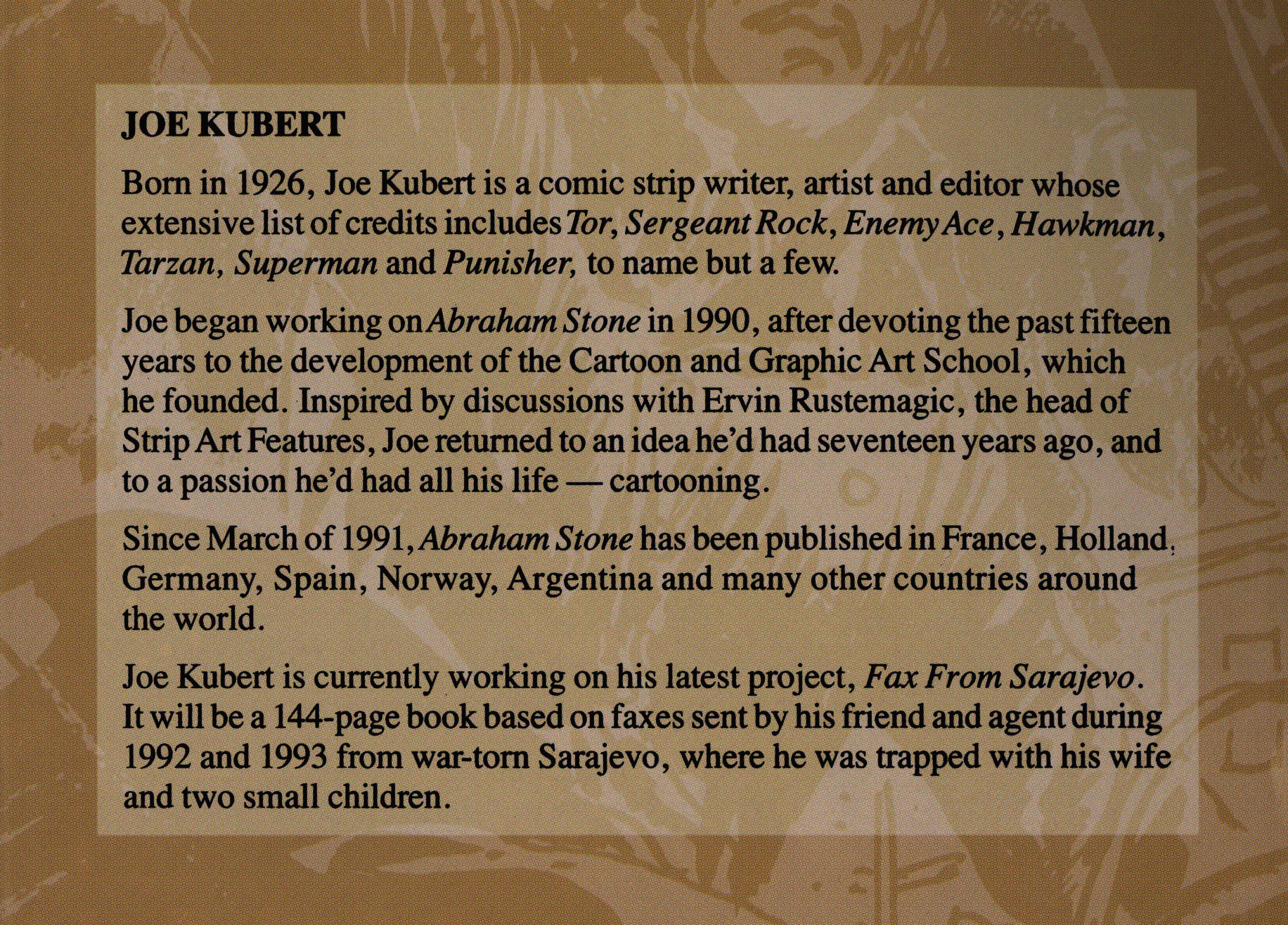 Aha! This was created for the European market, so perhaps that explains the more European look to this strip. It still doesn’t explain why Marvel used the Epic imprint to publish it. 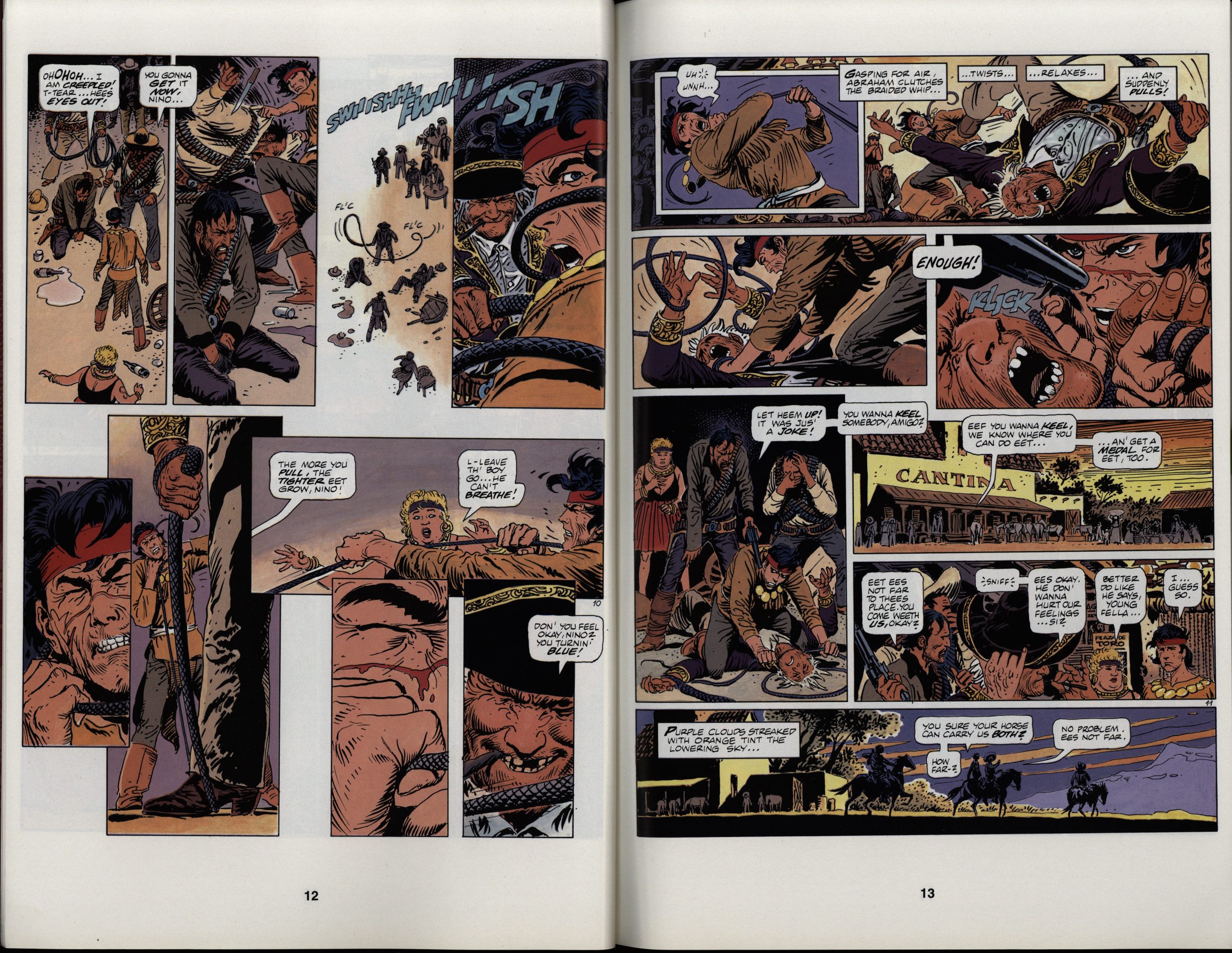 The second issue is a totally separate story: Abraham ends up in Mexico, involved in the Mexican revolution and (unwillingly) fighting for Pancho Villa. For some reason, the Mexicans talk een thees language eveeen wheeeeen talking amongst themselves? Shouldn’t they be talking Spanish? 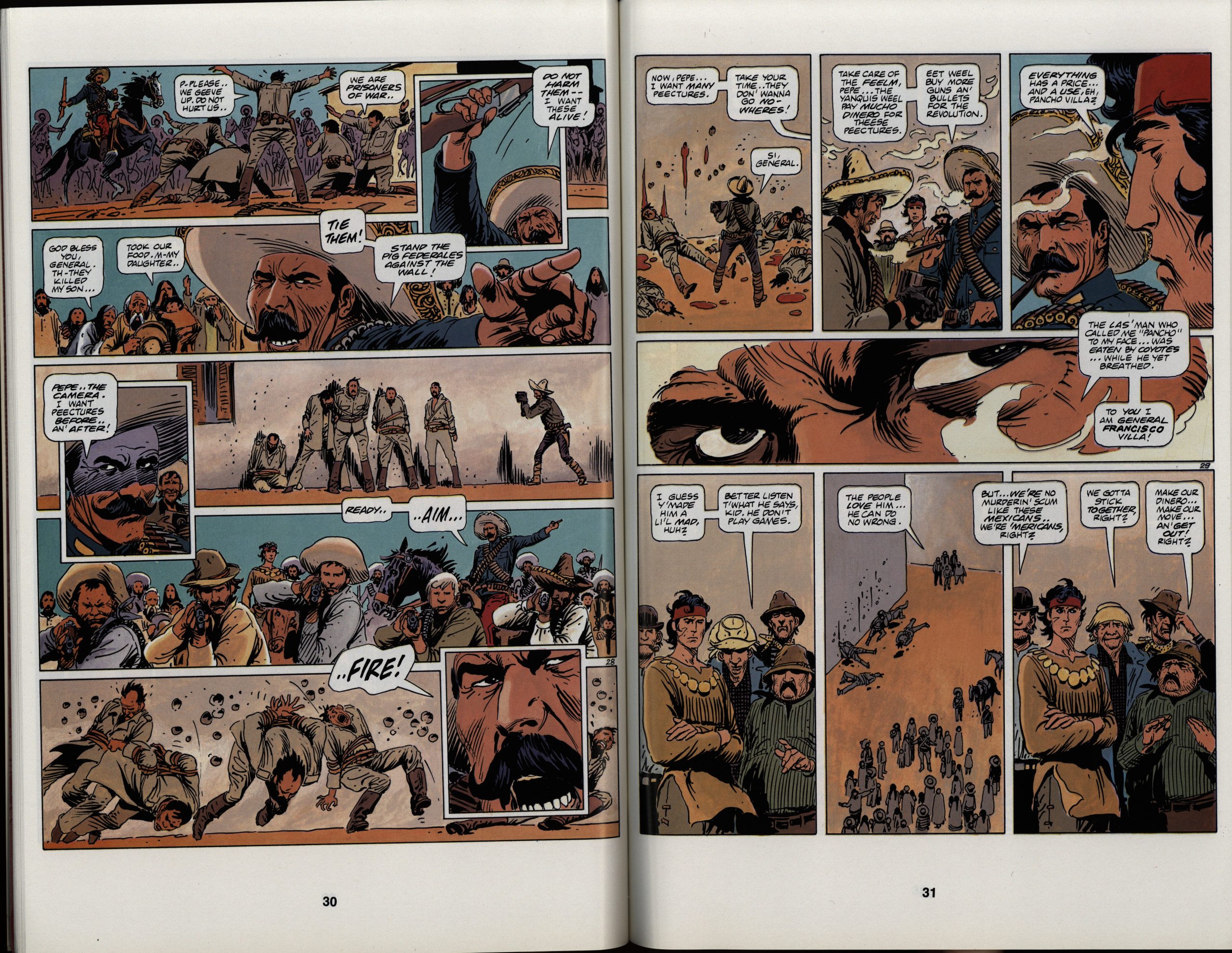 The problems the first volume had, plot-wise, are exacerbated to a ridiculous degree in the second volume: Abraham basically doesn’t do anything much of interest, but just drifts along with the proceedings. Until the final page, where he single-handedly defeats Villa’s army. Sort of. Oops! Spoilers! But it’s a frustrating read. The artwork’s as good as ever, though. 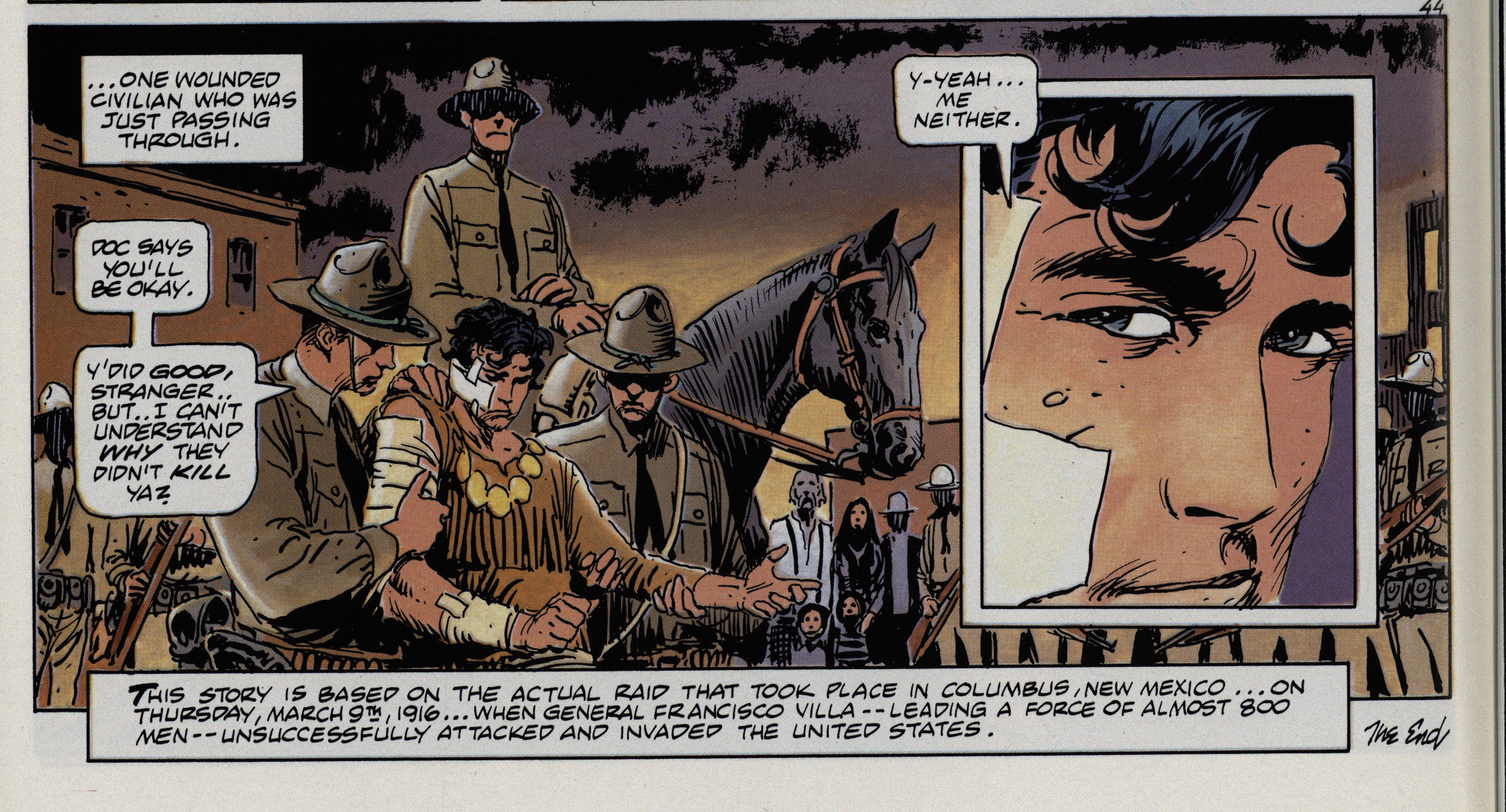 Oh! I guess Kubert just wanted to retell the Pancho Villa story and used this as the vehicle… The series has been reprinted in one volume by Dark Horse.

And there’s a prequel?

Here’s an interview by Gary Groth:

GROTH: Abraham Stone, if I remember, and I read at least one of them, was basically a Depression-era gangster?
Abraham Stone: Country Mouse, City Rat written, penciled, and inked by Joe Kubert © 1991 Joe Kubert and Strip Art Features

KUBERT: Did you really read it, Gary? No, he’s not a gangster. He’s a kid who was born on a farm in Pennsylvania. The railroad stole the land from his parents, forcing him to move out and around the United Stats at the age of 16 or 17. So this young guy is growing up in the late 1890s, early 1900s. It was a most exciting time in American history. Cars came into existence. The telephone had just been invented. The industrial revolution was taking hold. World War I was starting to boil. And I thought it would be a great time to build a story. Movies were starting to be made. I felt that such a story would be of interest not only to European readers, but also to readers here in the United States.

GROTH: How did it do?

KUBERT: Very well in Europe. Poorly in the United States. It was published by Malibu under the Platinum label. They did a nice job of packaging, but it didn’t sell well.

Oh, Malibu published the first volume, so the two I’ve read here are the second and third.

Anyway, that was it for Epic Comics in the 90s… I’ve tried to do some research to find out what the story was behind Epic being shut down (beyond Marvel Comics generally being in the toilet — they would file for bankruptcy a couple years later), but I’ve come up with … nothing. Not even a note in the Comics Journal.

‘Quite frankly, Marvel is not paying rates or
royalties that are competitive with what Malibu
and Dark Horse are offering,” Starlin told the
Journal. “In the meantime, Marvel is promising
to up their rates. They began promising this about
Six months ago, saying that they ‘re having ahard
time finding the money for raises while at the
same time they’re telling their stockholders that
for every dollartheyspend, they’re getting $1.42
back. They’ retryingtoconvince us it’s both ways
but it can only be One way Or the other. That, I
feel, is dishonest. And I think it’s self-destruc-
tive on their part. From my point of view that is
really the Crux Of what it’s all about.”

Falco expressed surprise at Starlin ‘s tone and said
he had received Starlin’s proposal and had acted
on it. “My initial reaction when I read it was that
it fit more into Epic,” DeFalco said. “I showed
it to Carl Potts. Carl told me he had already seen
it and gotten back to Starlin and given him an
Offer.”
‘ ‘In my own stupidity, I assumed that ifCarl,
as an executive at Marvel, got back to him, then
that meant Marvel had gotten back to him. I
didn’t realize he was waiting for me as an indi-
vidual to get back to him. I’m kind of at a loss
for words,” DeFalco said.

Epic Editor Carl Potts granted a request for
an interview for this story, breaking a long si-
lence toward the Journal.
Before beginning the interview, though, he
offered the following comment: “I think that
much in The Comics Journal is skewed against
Marvel and normally I wouldn’t care to deal with
any article going into the book, but since my
editor in chief asked me to talk to you, that’s what
I’ll do.”

Potts said that Starlin had been “intimately
involved” with establishing Epic Comics, not-
ing that the first Epic comic to see print was
Starlin ‘s own Dreadstar. “He helped get Epic up
andrunning, so he knows Epic and Marvel are
the same company. He also knows whatthe basic
Epic deal is because he helped set it up. The
relati vely few changes in the plan since the Origi-
nal days are higher rates and the elimination of
cross collateralization. The deal today is actu-
ally somewhat better.”
Cross collateralization, Potts explained, is an
accounting procedure invoked when a particu-
lar issue fails to earn back the advance paid out
for it. The unearned portion is charged against
earnings on subsequent issues. Eliminating the
practice means making each issue stand alone
on an accounting basis and is to the decided ad-
vantage of the creator.

Well, if Marvel refused to talk to The Comics Journal, that may explain why there’s no news story about Epic being shut down? Or perhaps I’m just not very good at searching.