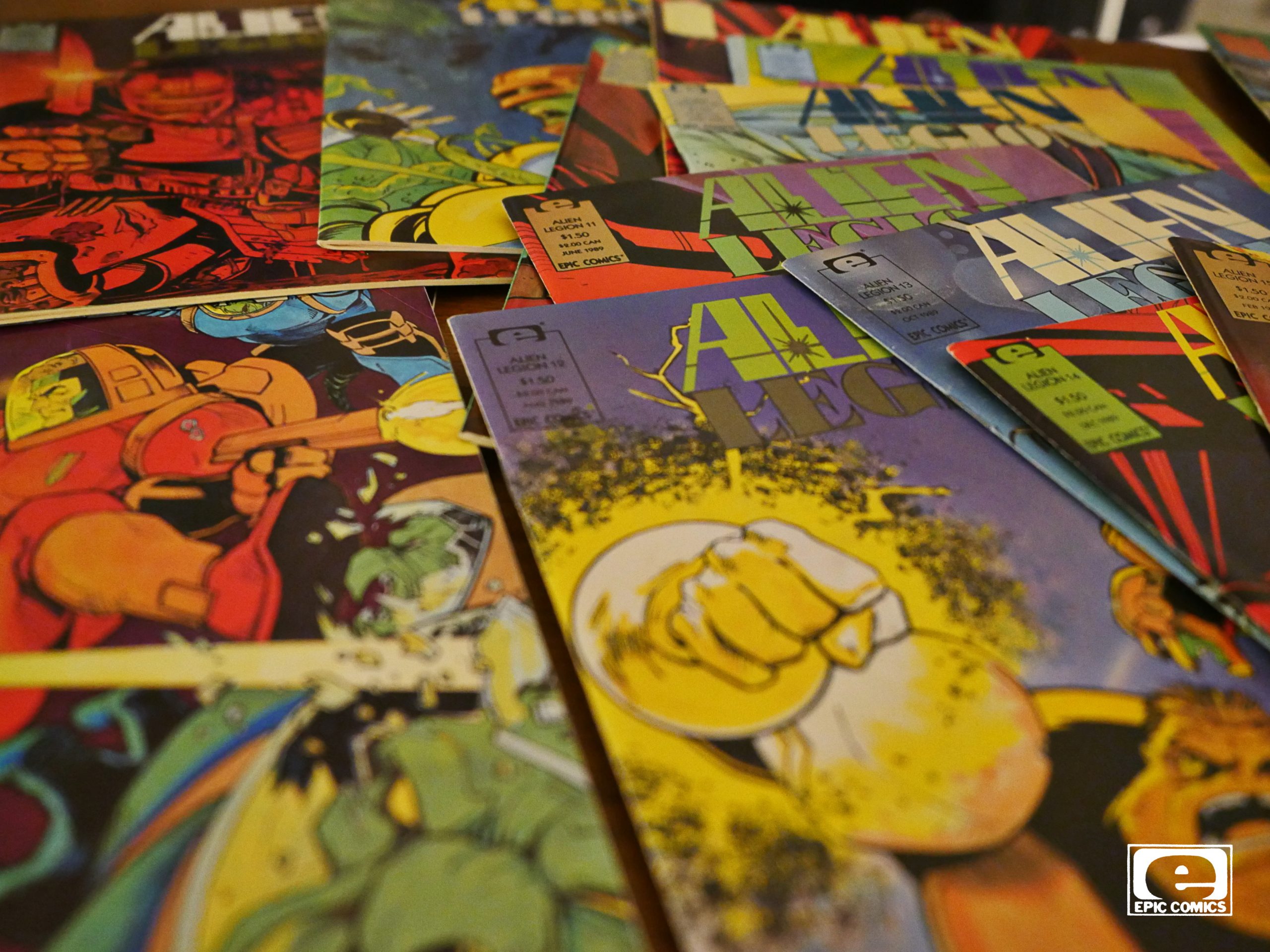 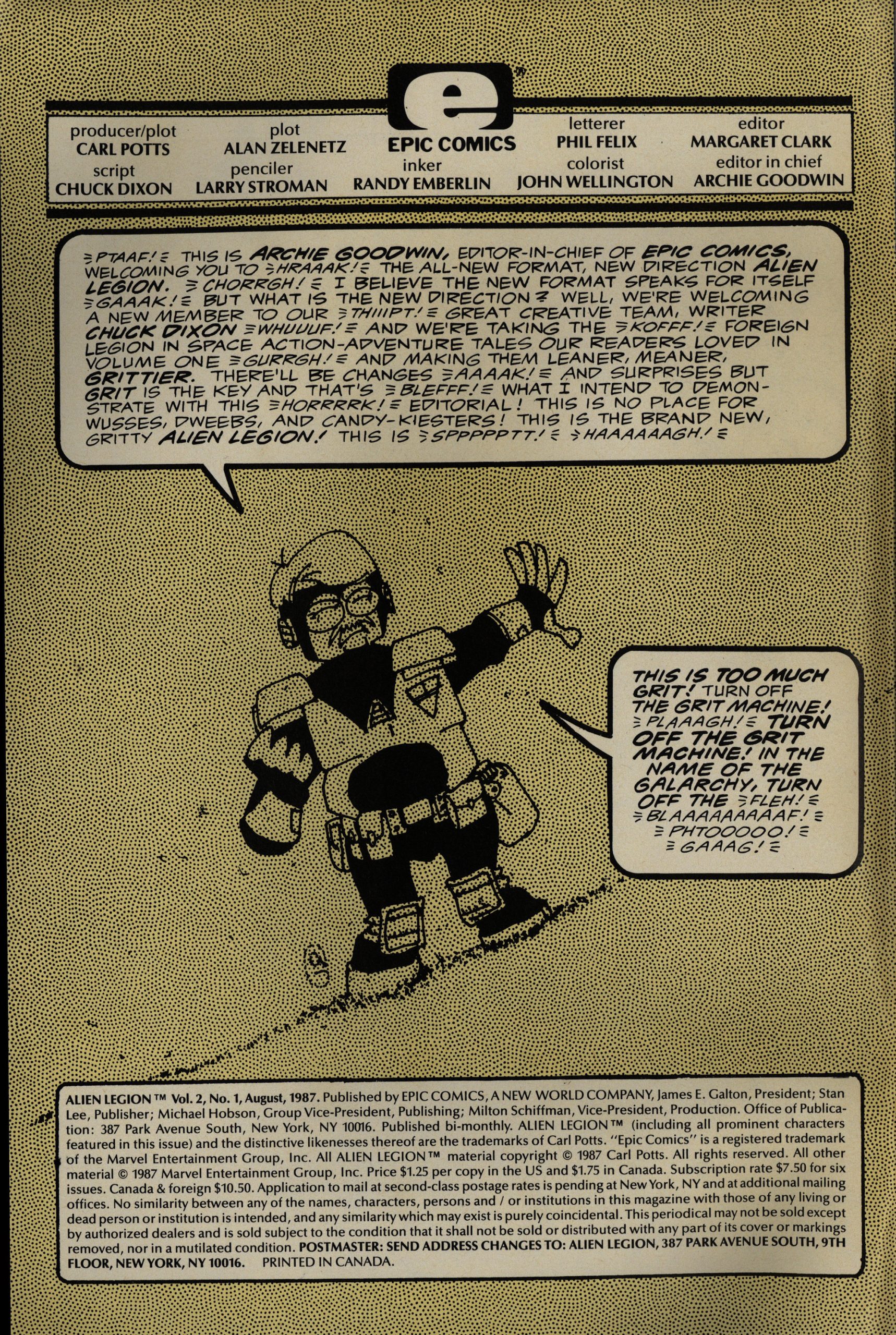 We lost that effete “the” and we’re now dark and gritty, as Archie Goodwin explains. Well, this is 1987, after all, and Dark Knight Returns had been a major success, and everybody learned one thing from that: Dark. Gritty. 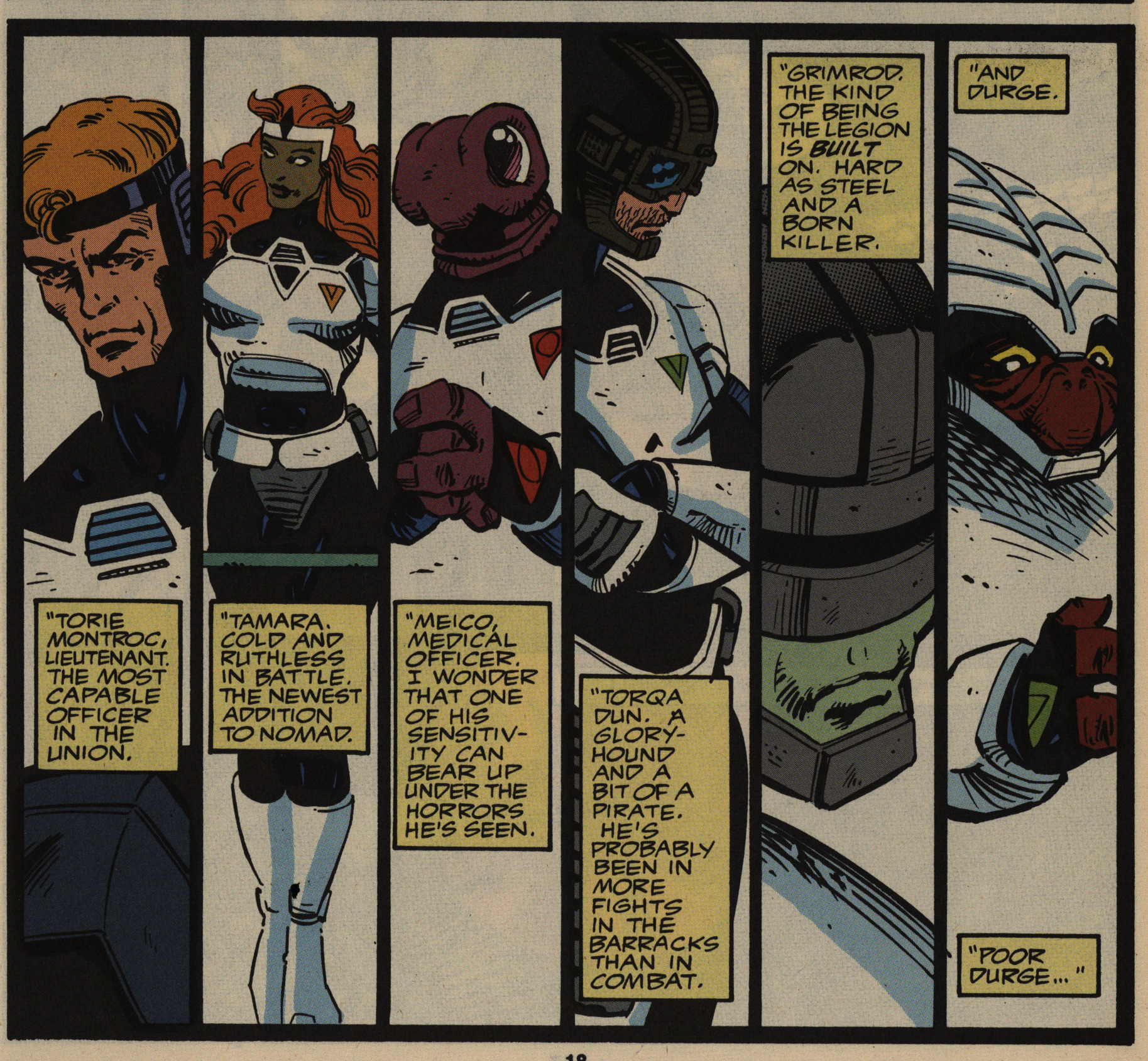 So writer Zelenetz is out (although he co-scripted the first two issues) and soon-to-be-famous writer of gritty things, Chuck Dixon is in. (He’d worked on Airboy before, which wasn’t very… gritty.)

We start off a couple of years later, and all the characters we cared about from the first series have been lost in action. 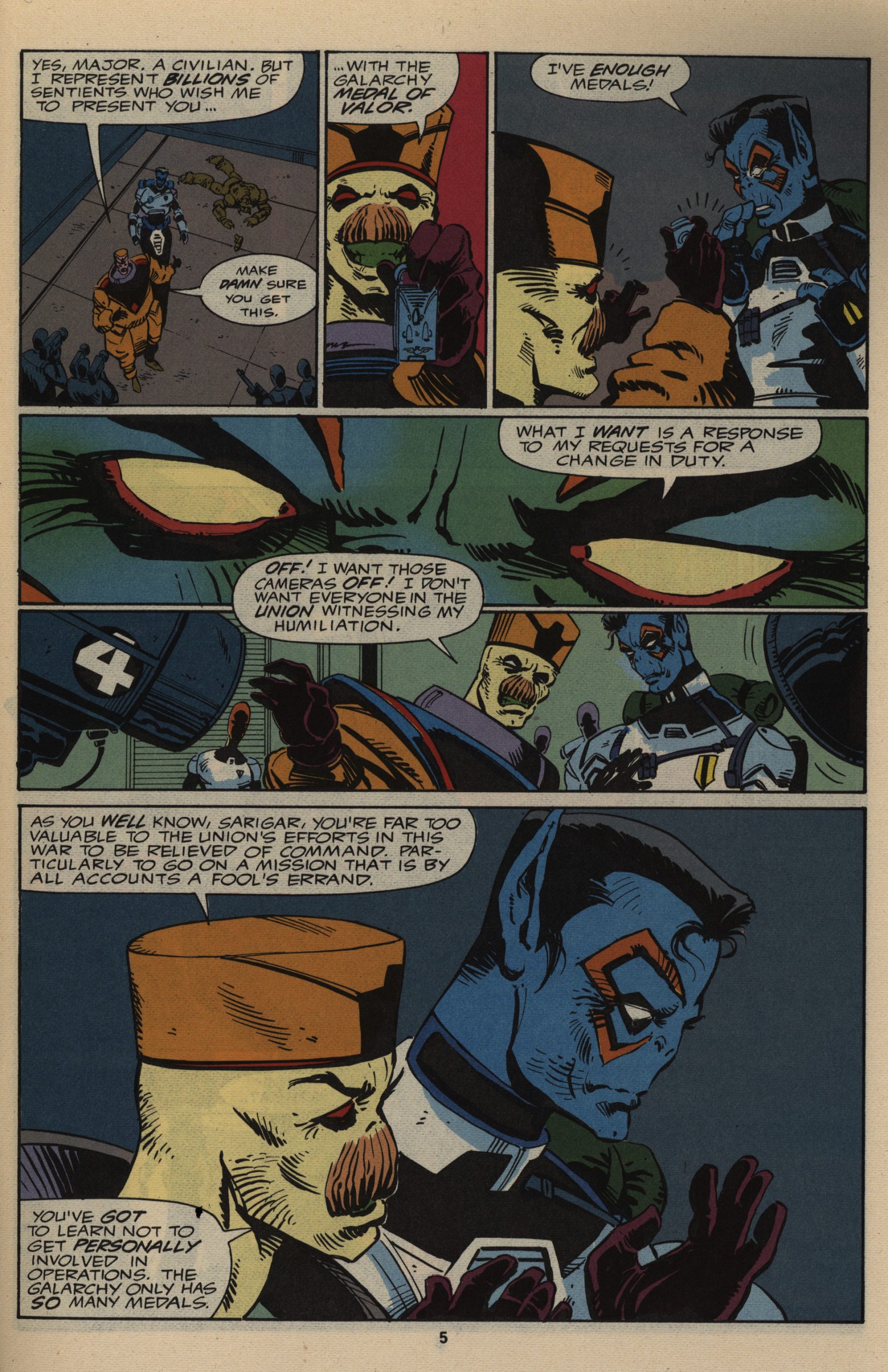 So the boss guy has to quit the Legion to go after them, see? All on his own, see?

Fortunately he’s got the backing of a billionaire, which helps, I guess. 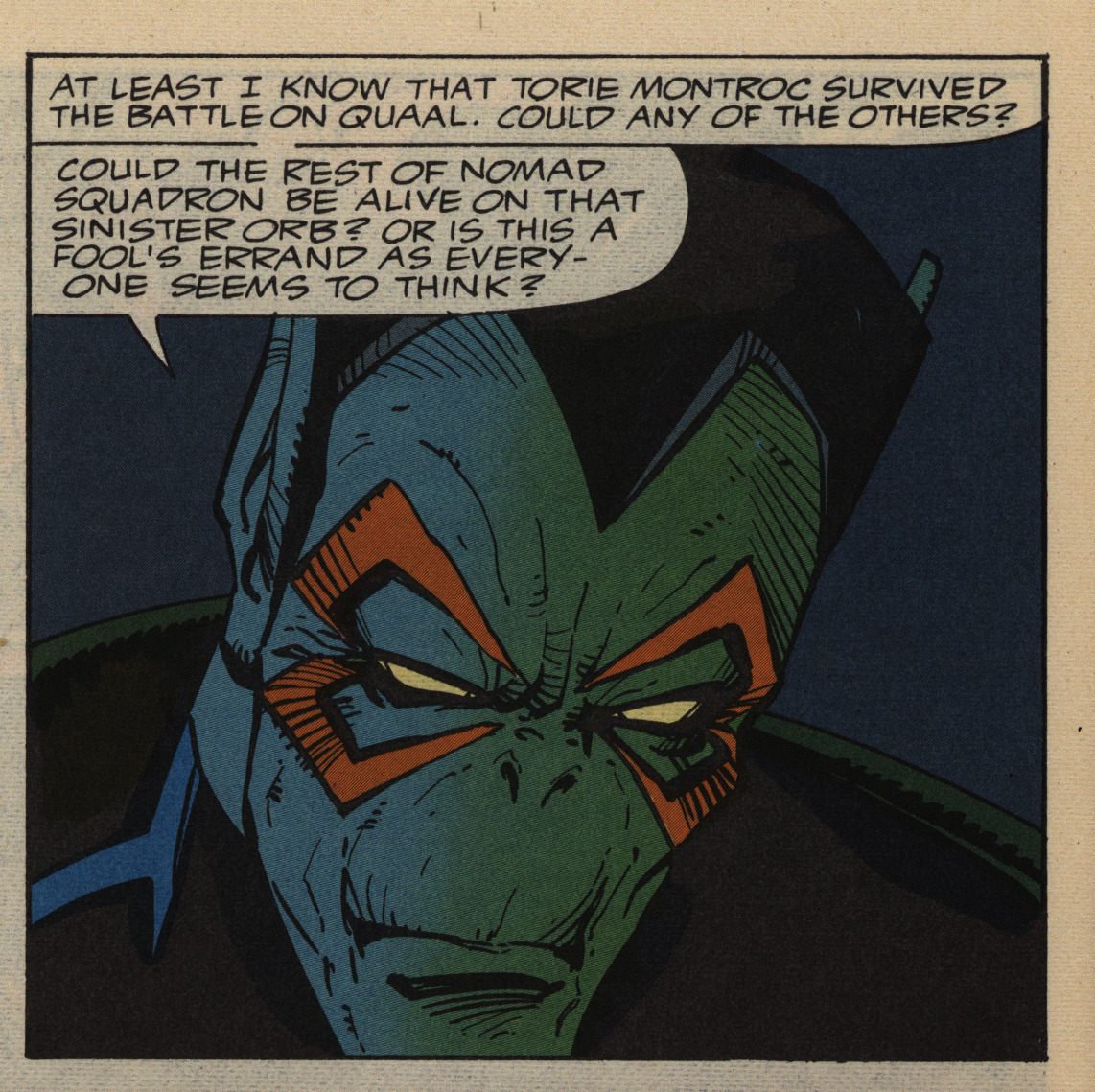 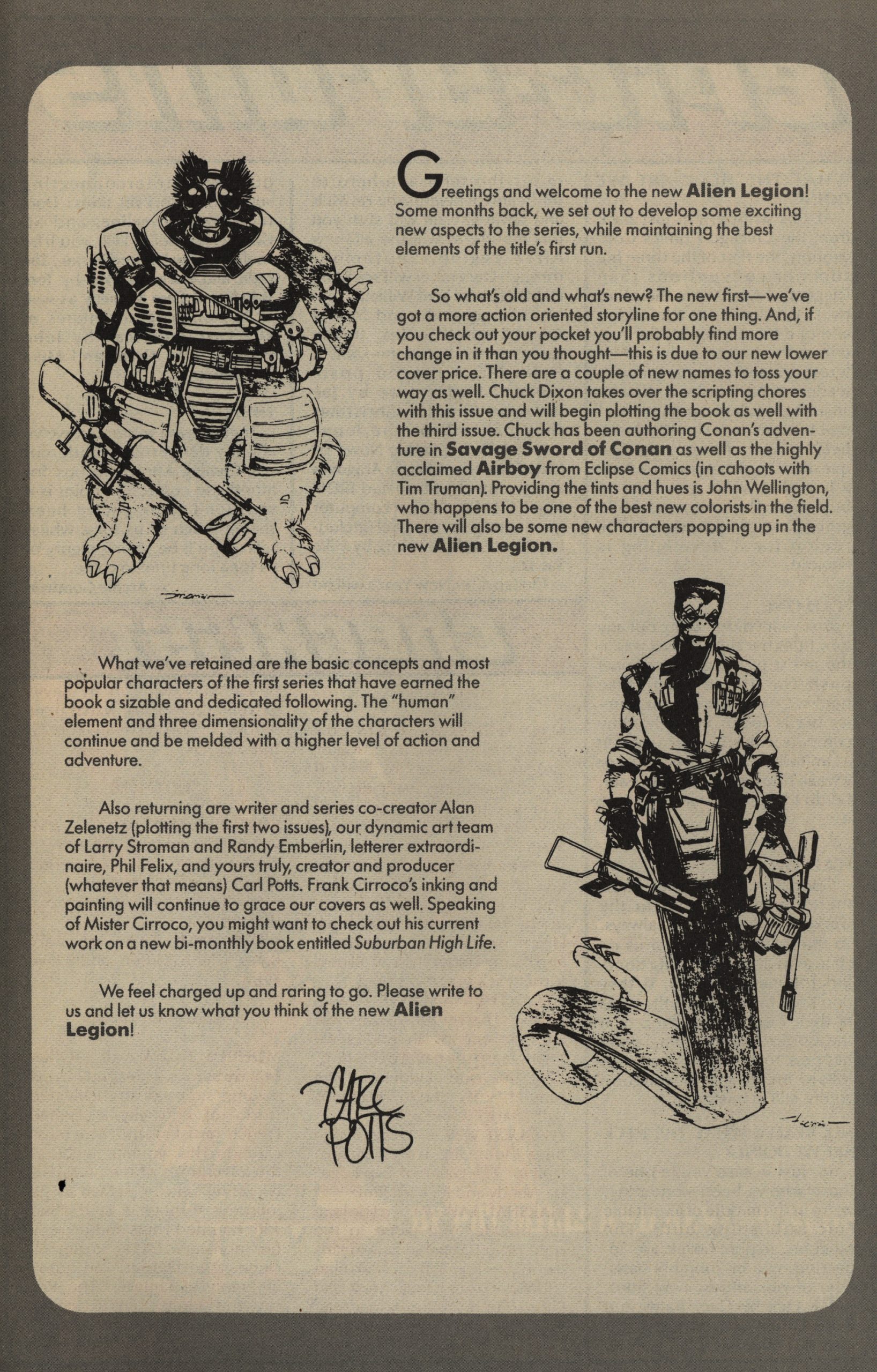 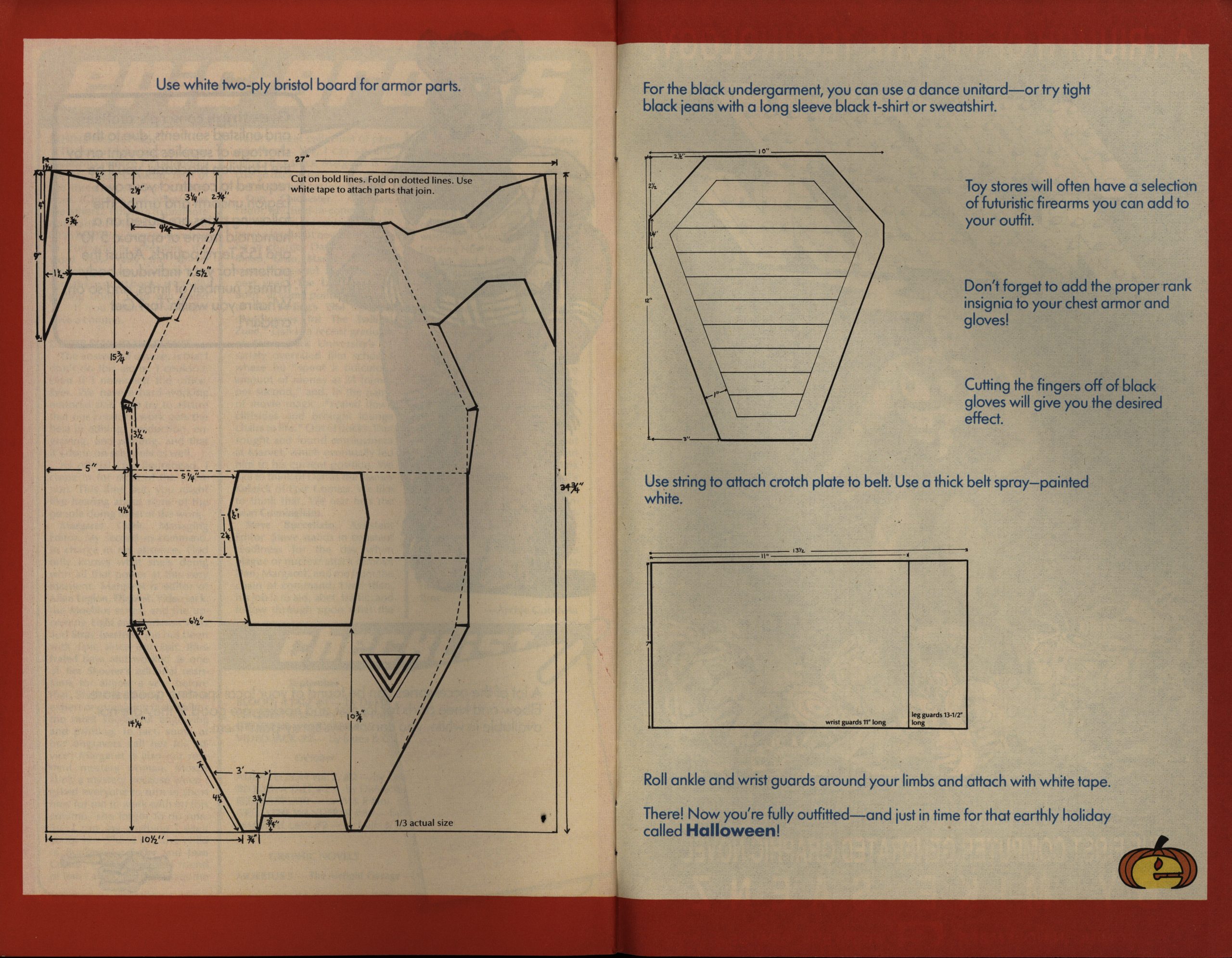 This is a dark and gritty Alien Legion, so of course we get some schematics for Alien Legion Halloween costumes. Well, you can’t say that they’re not self-aware of what they’re doing… 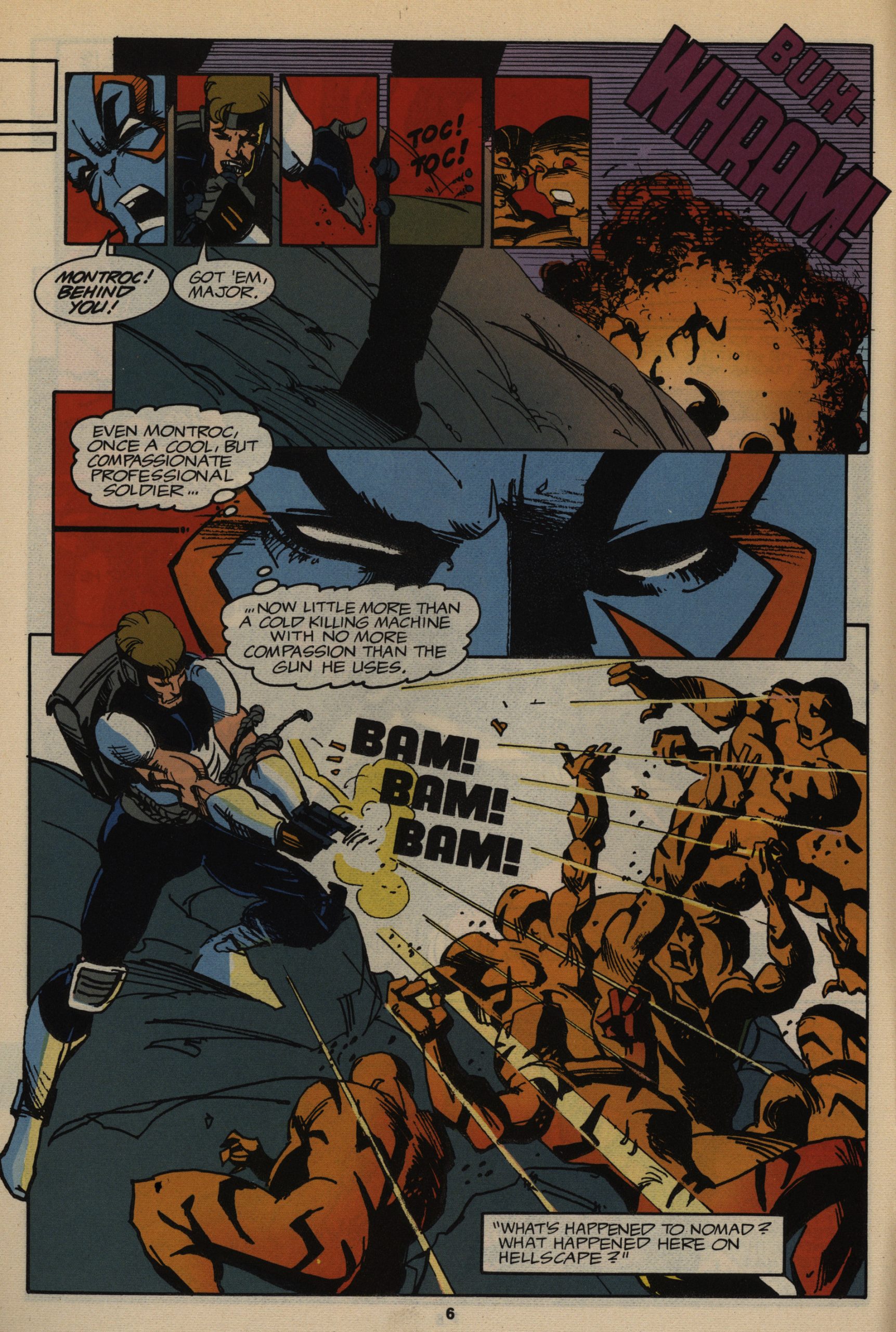 One of the things I liked about The Alien Legion (the first series, with the effete “The”) was that they did establish everybody with a very distinct character, and they unfortunately undid a large bit of that. For instance, the guy above there was the nice guy, and here they try to redo him as a berserker kind of guy, which gets into the territory of at least two other characters. And then they sort of backtrack, and then they sort of forget about him altogether.

So feral! They’re all so feral now!

So they set up a squad of all the most losingest losers in the Legion, and that’s what the rest of the series is about. Well, it’s a concept, I guess? That we’ve seen … all the times before? Gone, too, are any mention of preserving any ecologies or anything like that, so it does make you wonder why they didn’t just start all over again with different characters. 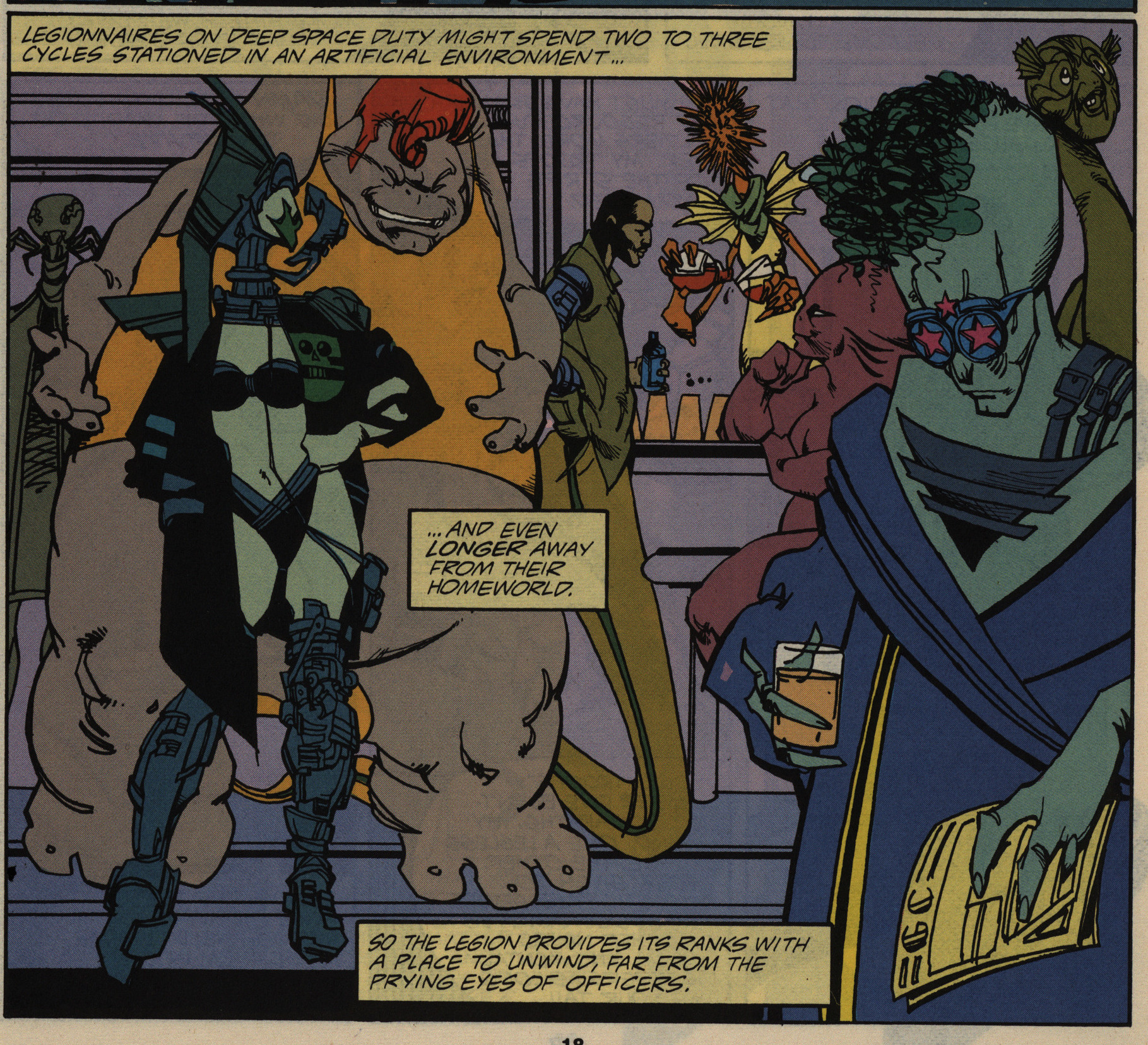 The penciller and inker from the The series stayed on, and the character designs grow wilder and wilder. About this time, Epic started publishing Moebius translations, and I wonder whether Stroman was comped a whole bunch of copies, because his artwork grows more and more fun. It also grows more incoherent: He excels at these tableaux, but the action scenes seem more dashed off. 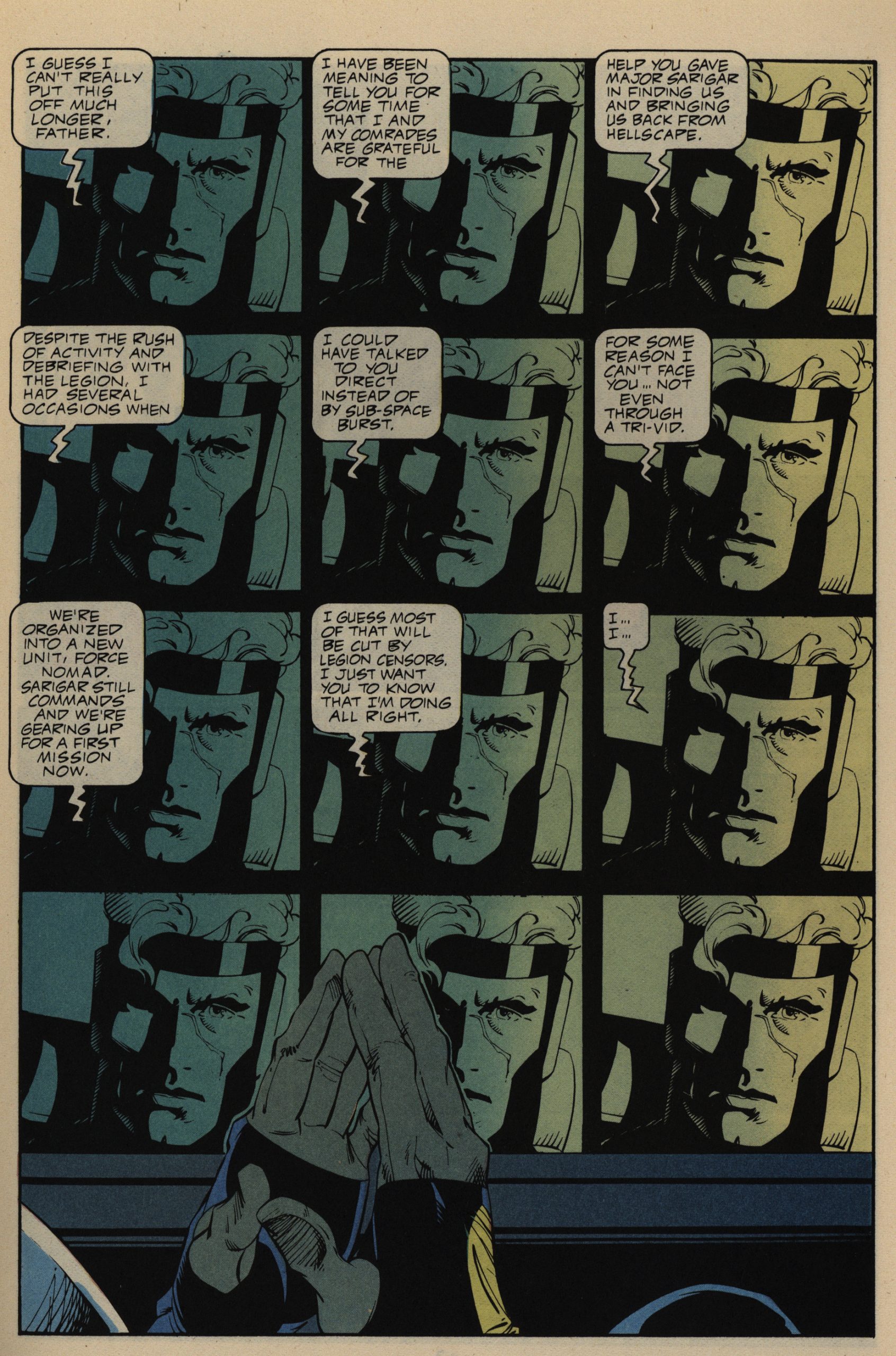 Oh, yeah, I guess Dark Knight Returns was out… 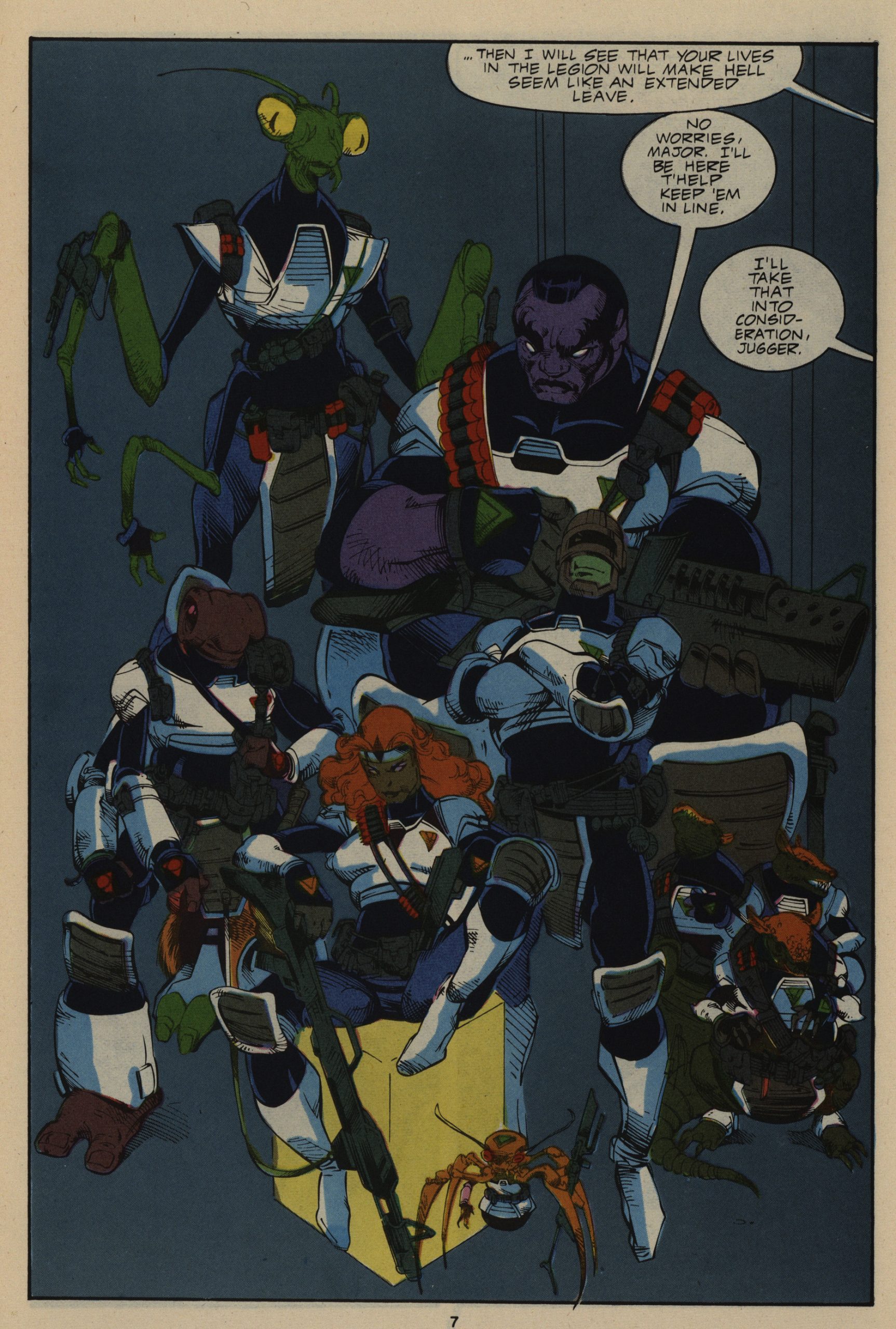 Storywise, there isn’t really much I have to say about this series: It’s pretty much nonsense all over, and not very entertaining. Getting through these 18 issues was a drag. But the pages are pretty fun to look at; especially the totally weird colouring by John Wellington. It’s very dark, but not very gritty, and uses way more cold greens and cold blues than you’d think somebody would be allowed to on a Mando paper (i.e. somewhat absorbent paper) comic.

You gotta love that running pose. 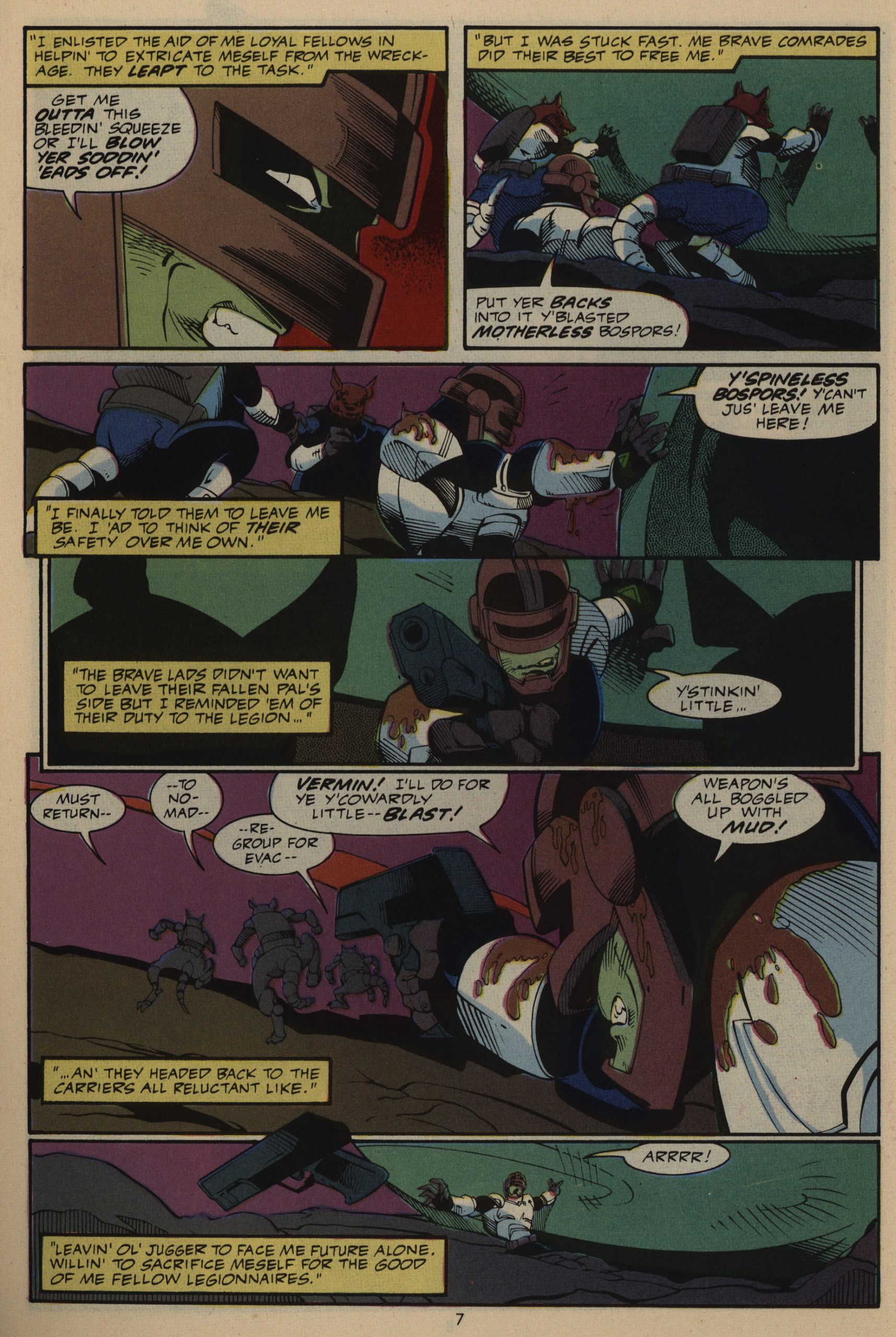 The book is told in a fairly straightforward fashion; not very tricky. This is as experimental as it gets: We get the narration from the green guy (he’s the grittiest) being contradicted by the panels themselves. Sure, it’s a hoary old trick, but it’s fun. 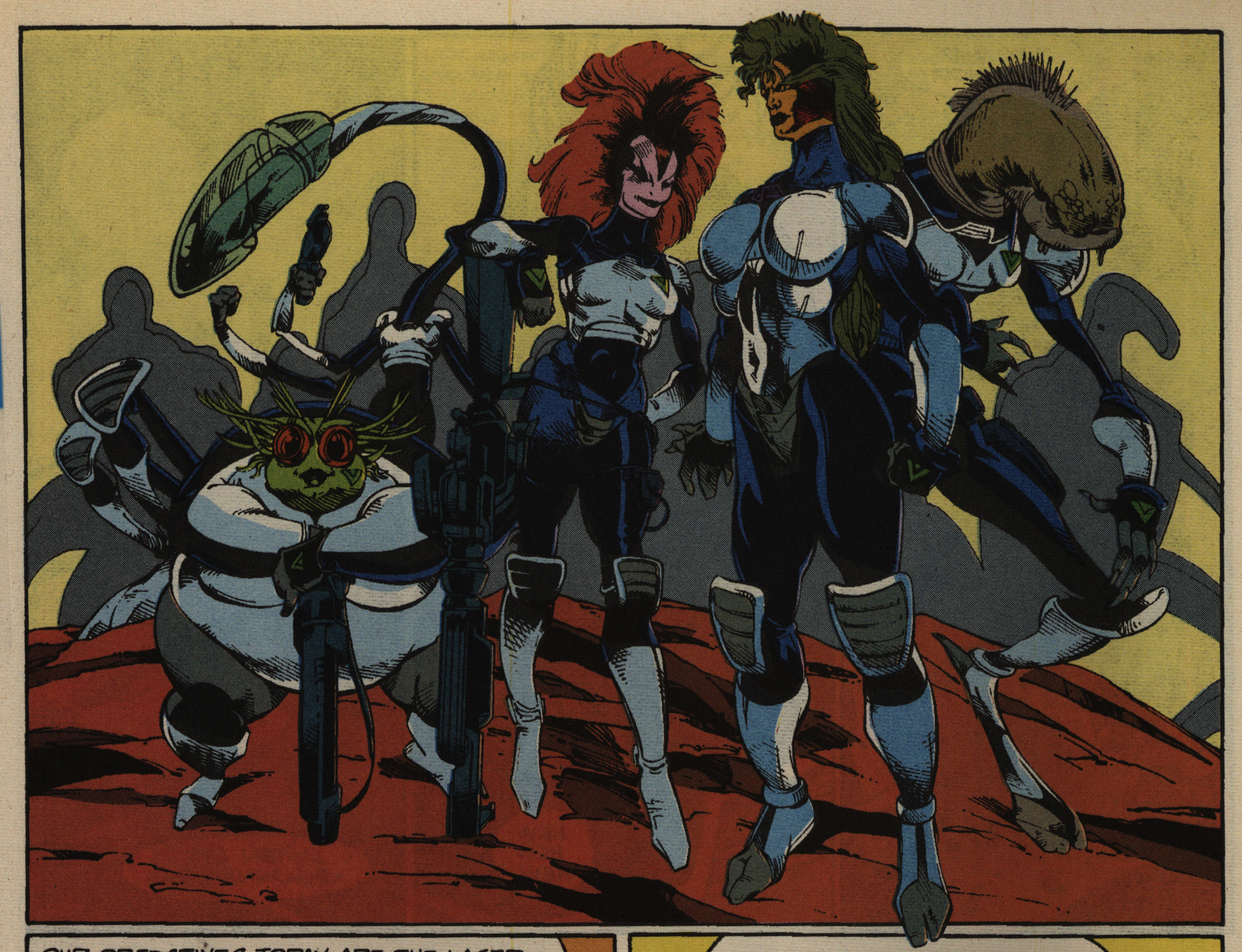 Oh, yeah, in the first series there was some kvetching about the lack of female characters, but we get a bunch of them here. None of them have very prominent roles, but on the other hand, their combat uniforms don’t have high heels. 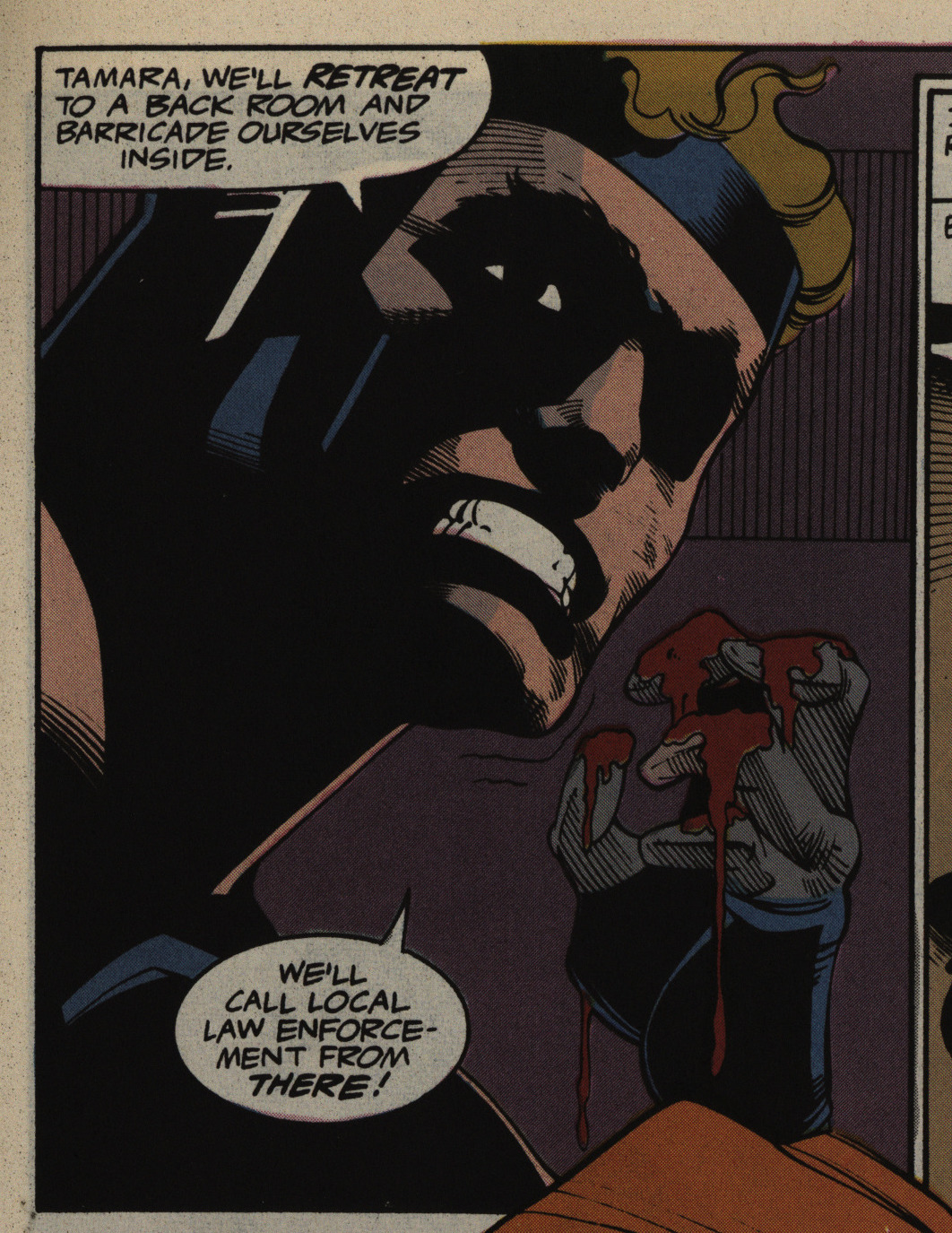 While fun to look at, the artwork is wildly variable. At random, the characters will grow necks twice as thick as normal. 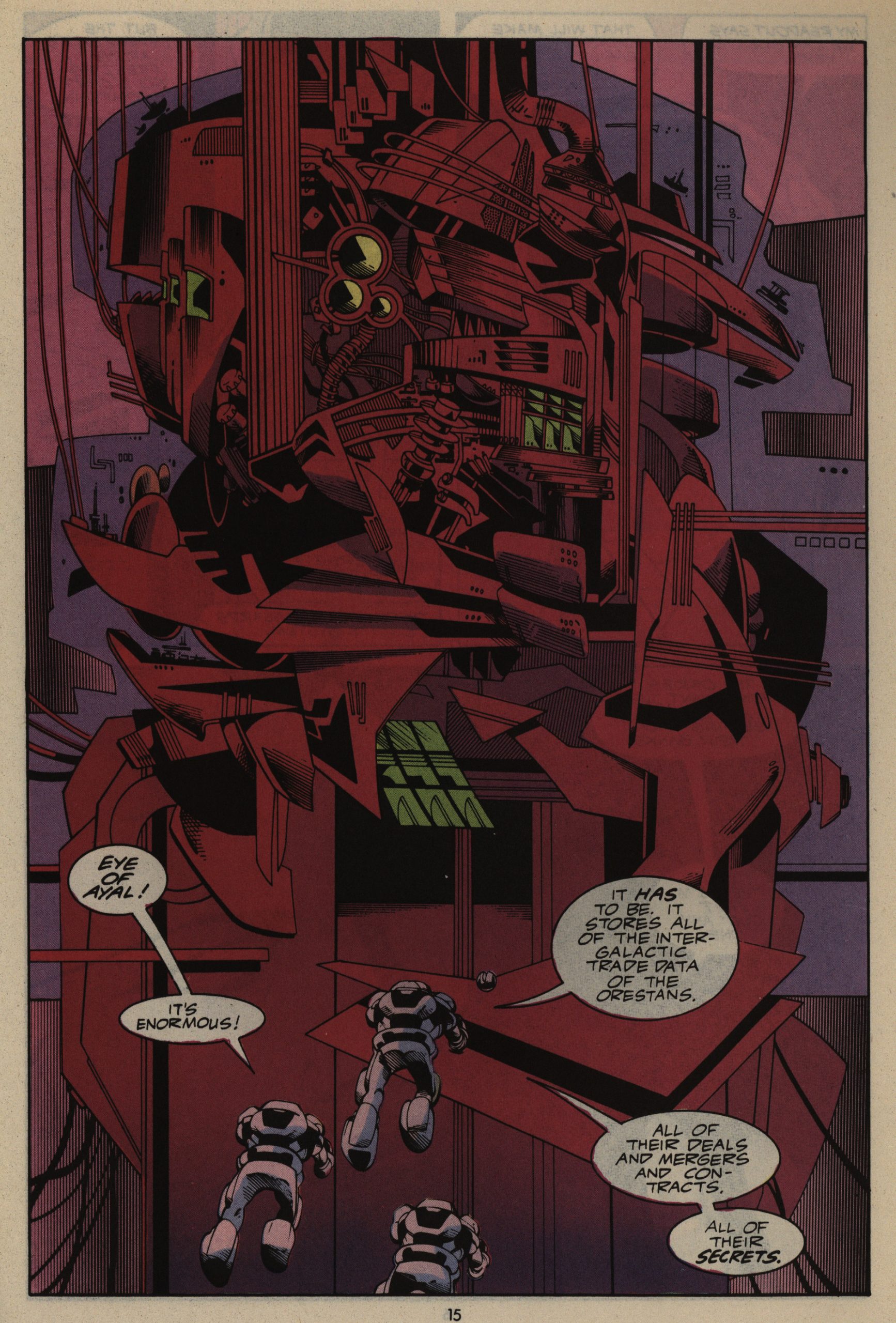 Did I mention that this is a very stupid book? I wonder whether the writer has any interest in sci-fi at all, because all the concepts introduced are just… moronic. Here, for instance, an alien race has put all their knowledge on an unmanned station far in space, so our heroes just walk in and steal the knowledge they need.

But that sure is a design for a memory storage device, isn’t it? ISN”T IT?! 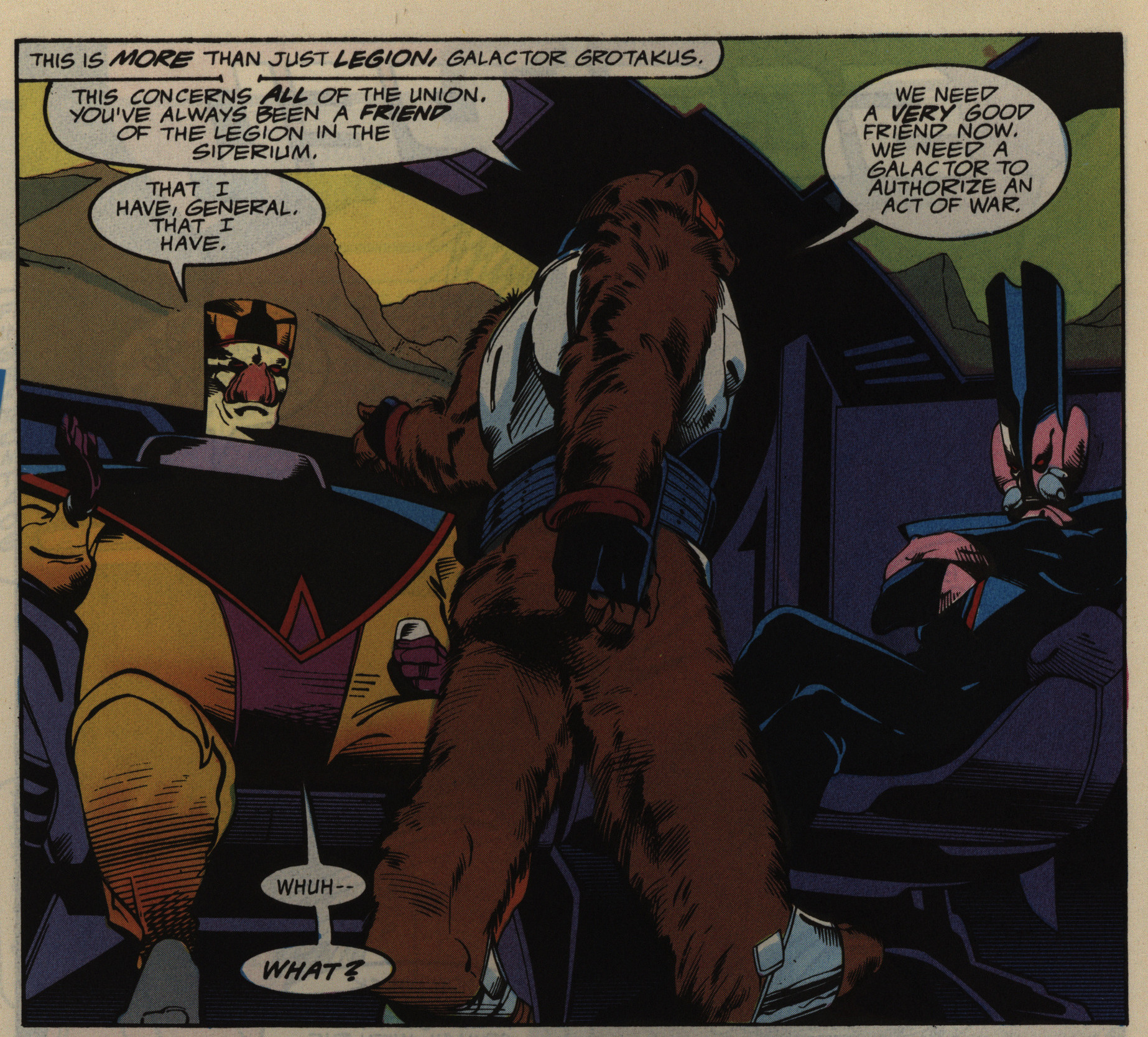 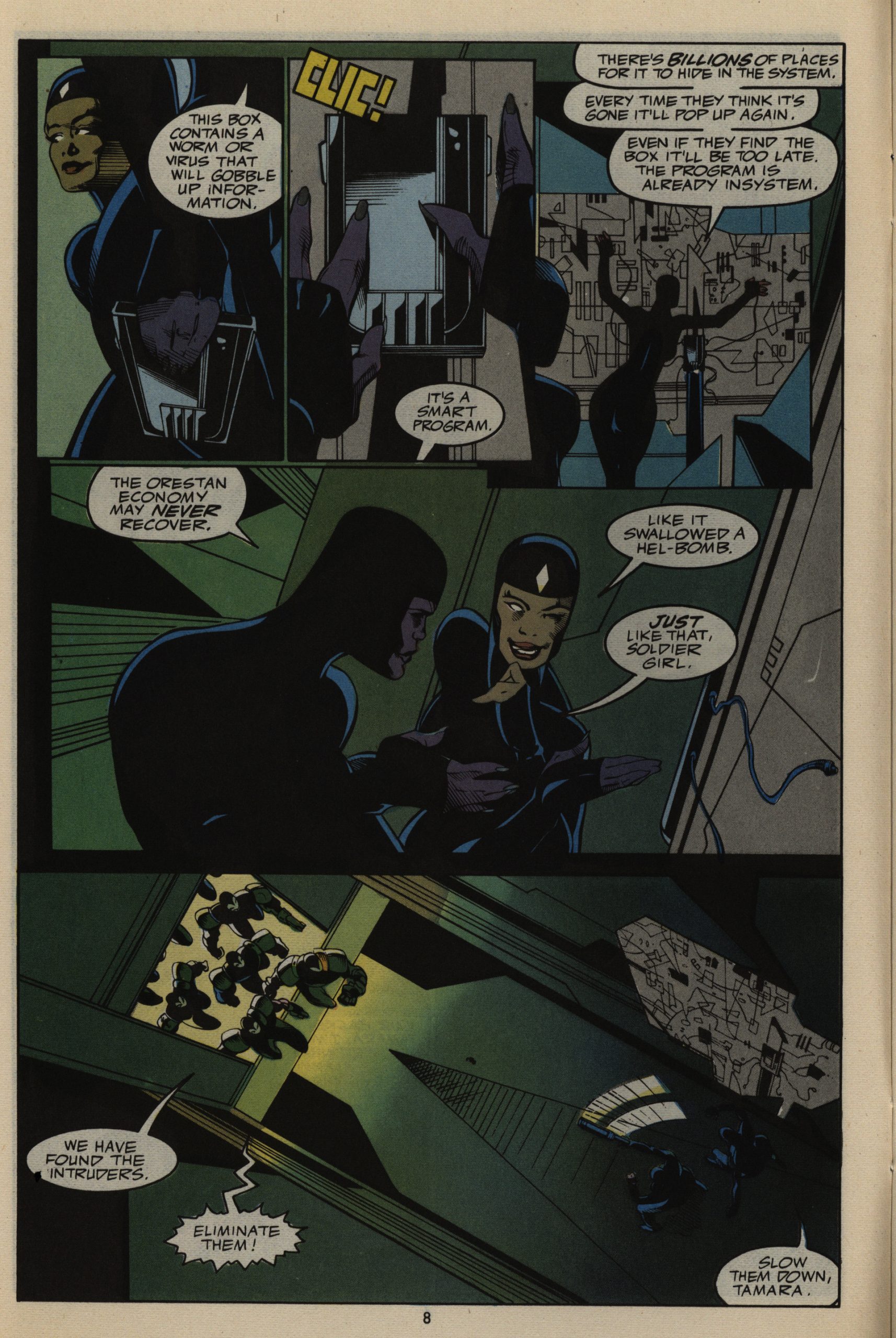 Oh, and they plant a virus that’ll take down a planet. Apparently. I don’t think anything really comes of it? Perhaps it was just a bad idea? But pages like this make me happy. Look at that colour scheme! Look at those … bannisters? I have no idea whether it makes any sense at all, but it looks sharp. 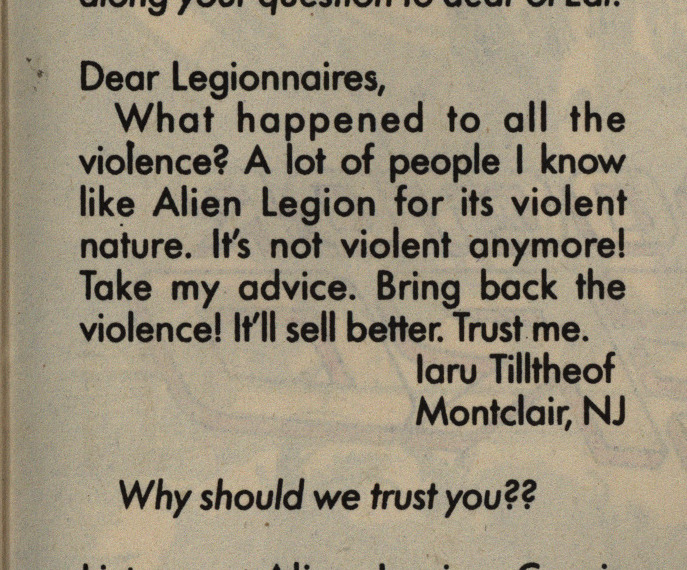 Some readers think that it’s not as gritty as it should be. Look at this character design! Just look at it! We get a few more pages of stats (a recurring feature in the The series), but only for a very select number of aliens. Most of them are killed off within a few pages of being introduced anyway…

Heh. They had a competition where you could win a Sienkewicz (sic) toaster? Nice. I tried googling for images, but couldn’t find it. Oh yeah, Janet Jackson took over the colouring after some issues, but continued on in much the same vein. People noticed and liked it. And, of course, she was gone the next issue.

But this was when Archie Goodwin left, too. Probably not related events, though. The colouring doesn’t change radically, but it does become more conventional gradually over the remaining issues.

As soon as Goodwin left, the pages get this “tab” thing on the top, which I guess means that Alien Legion now has newsstand distribution? (The colours are a code to let retailers know what books are current without having to look at the date.) The last few issues focus on this character to the exclusion of everything else. He started off in the The series as a psychopath, but is obviously who they think is the only interesting character in the book.

We even get an entire issue about his sad childhood. No it’s not! Instead of a continuous series, we’ll get a number of miniseries. Gah. I guess there’ll be one more blog article about (the) Alien Legion, then… Up until now, there’d been virtually no ads for non-Epic Marvel comics in the Epic comics, but things are getting more muddled now that Goodwin is gone.

I tried finding contemporary reviews of this iteration of Alien Legion, but I was unable to.