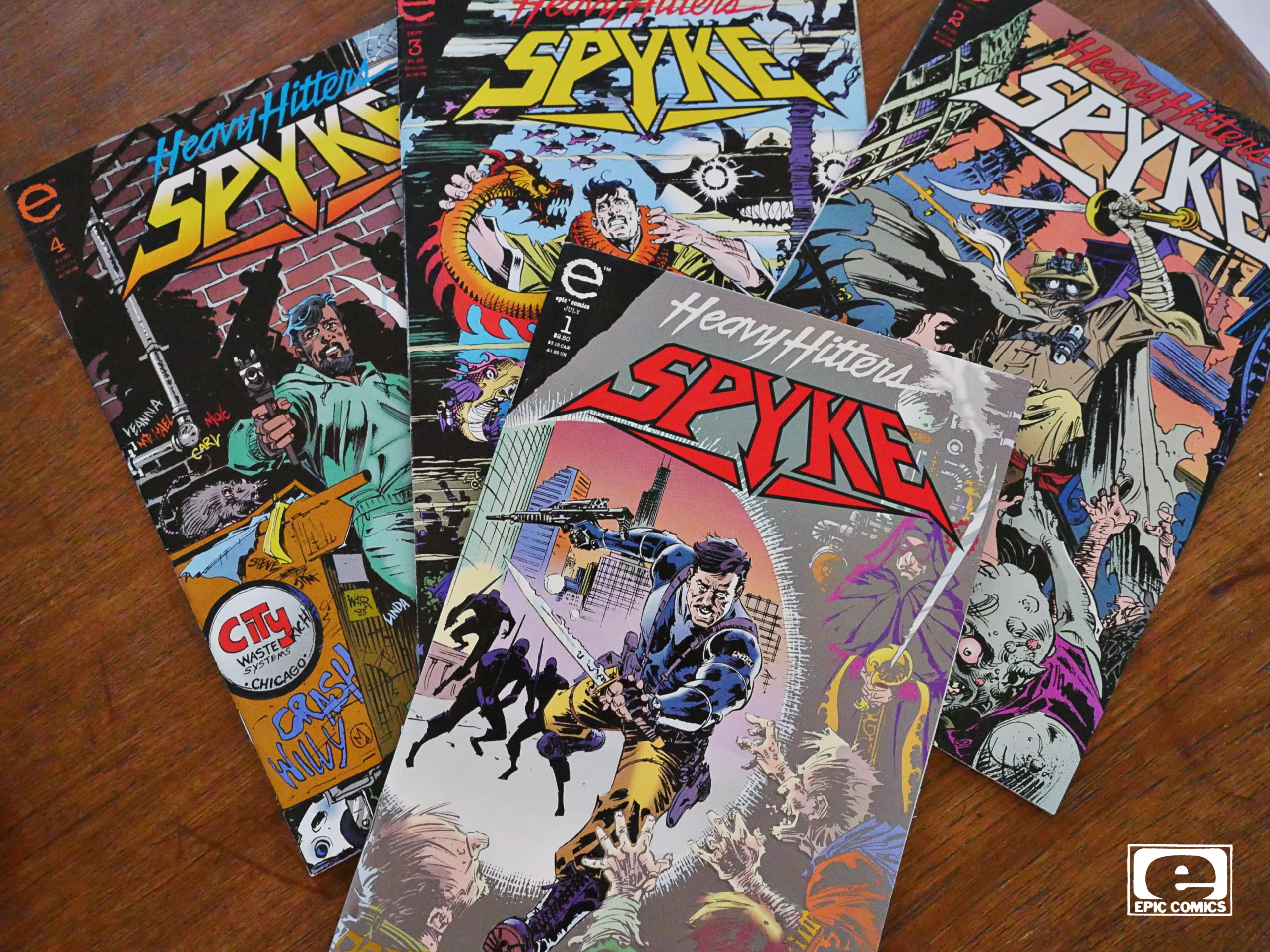 Like everybody else (EVERYBODY!), I quite liked Nexus. I bought the collected edition the other year, though, and I realised that whenever Steve Rude wasn’t drawing it, it went to shit.

I’ve been a bit leery of Mike Baron ever since. He’s got serious edgelord tendencies unless reined in by somebody with some sense of taste, is my impression. 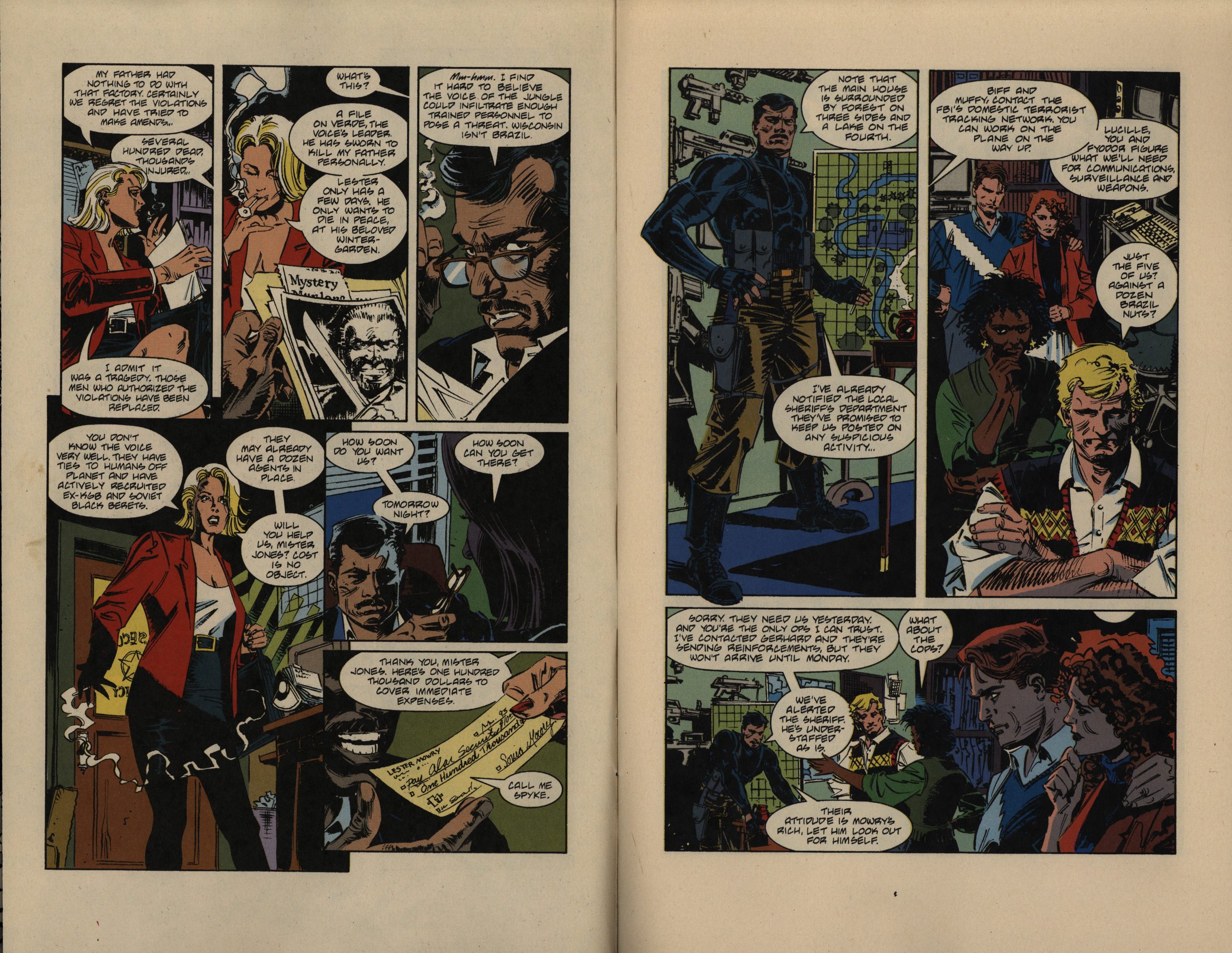 Hey! This is just some straight-forward secret agent nonsense! *phew* How unusual for Baron…

I’m not familiar with Reinhold at all, but the artwork seems to be of the kind required for this sort of book. The anatomy is a bit off (her head in the lower left panel seems to have undergone a Jivaro shrinking process, for instance), but it’s fine. I mean, people have entertaining patterned sweaters and there’s actual backgrounds and stuff. 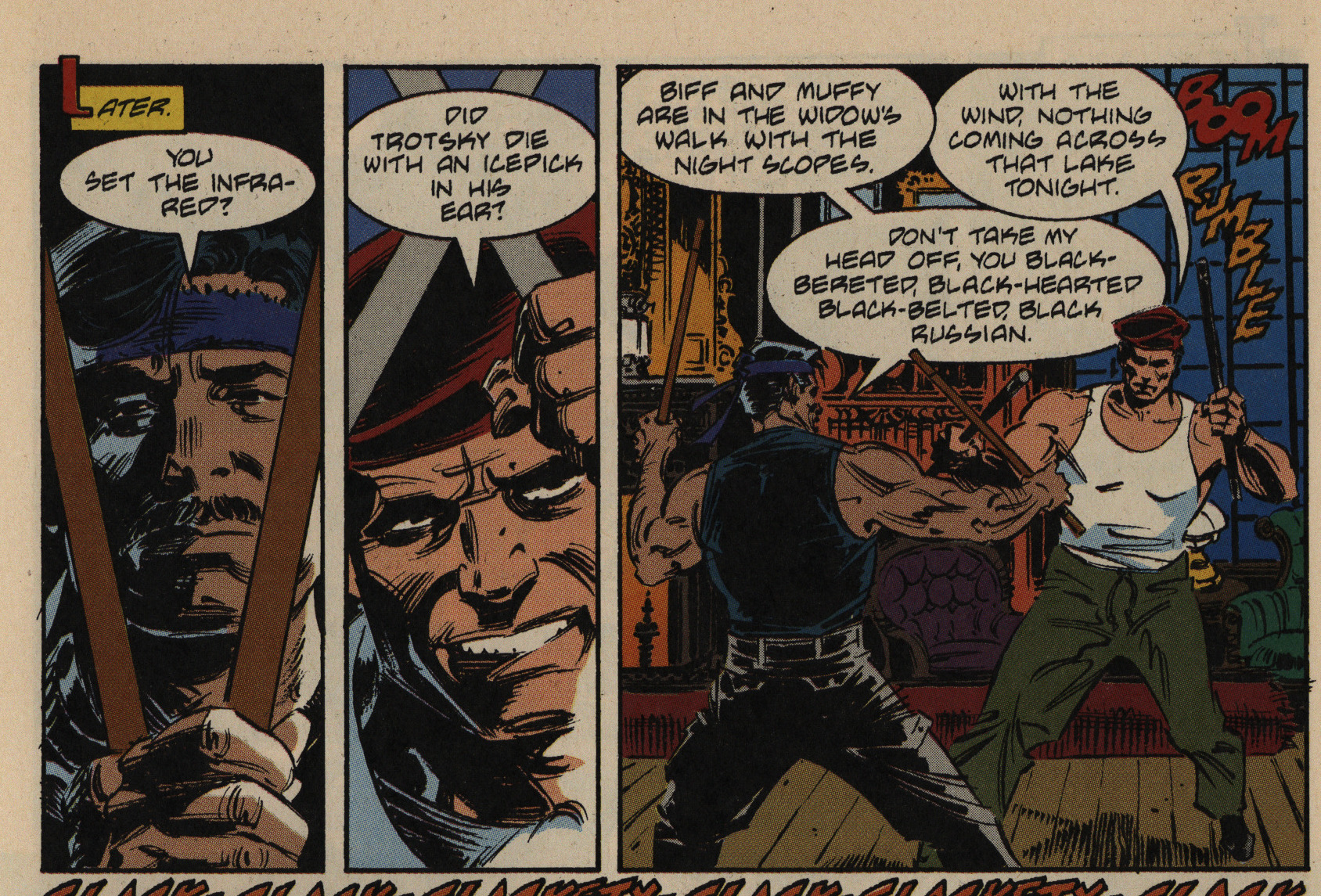 That doesn’t really fall off the tongue easily, does it? And his beret isn’t even black? I guess it’s a KGB thing.

Did Trotsky die with an icepick in his ear, though?

On 20 August 1940, Trotsky was attacked in his study by Spanish-born NKVD agent Ramón Mercader, who used an ice axe as a weapon. 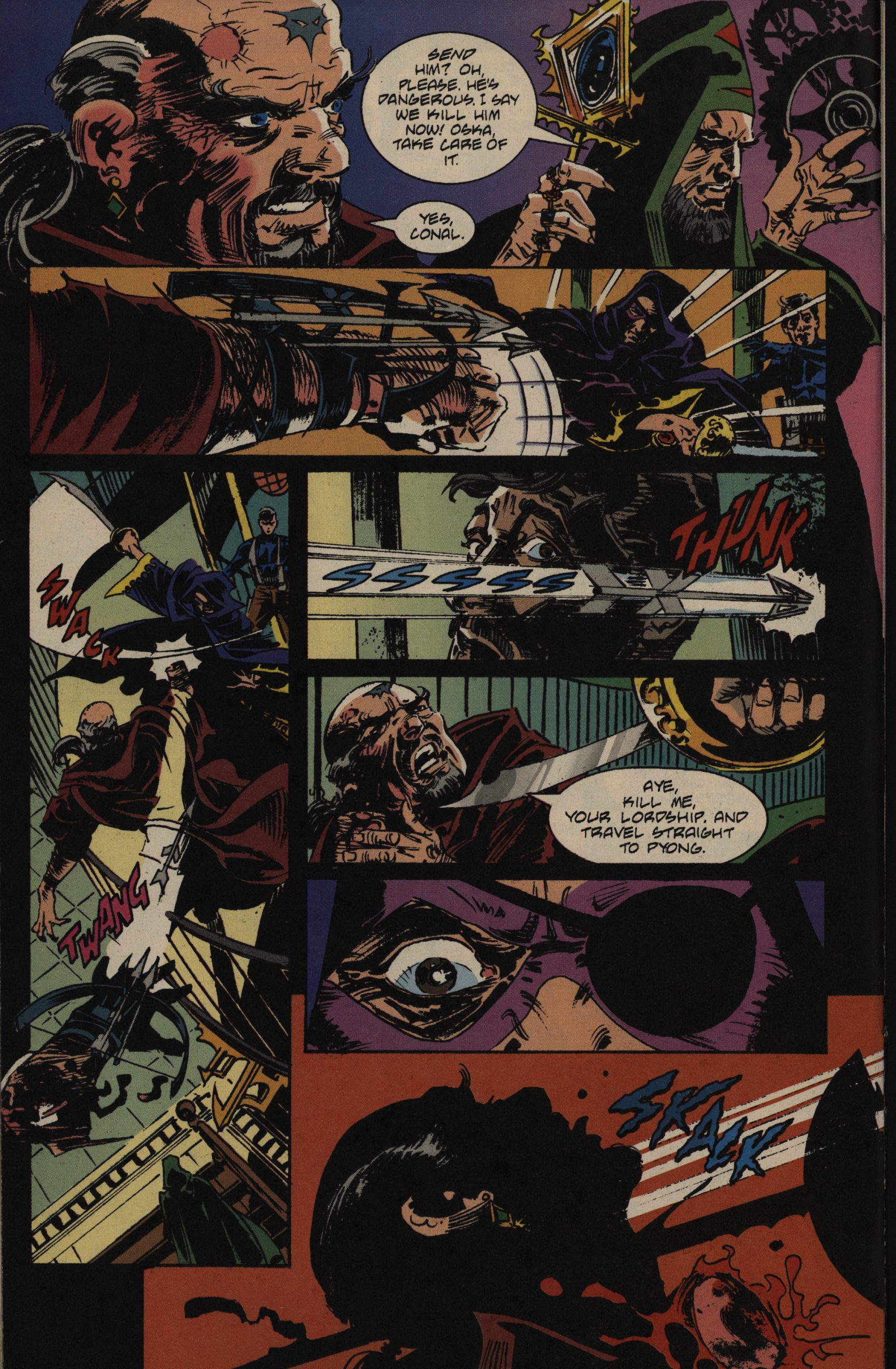 But then! Suddenly! We’re in a different dimension and things look a lot more like a Mike Baron comic all of a sudden: The way to travel between dimensions is to kill somebody, of course. You can’t be sure what people are dimensional portals, so there’s a lot of killing.

I want to say that this is a surprising, unexpected development, and it is in a way: I didn’t see this coming in particular, but once it was there, I was all “oh yeah. of course. this is Mike Baron”. 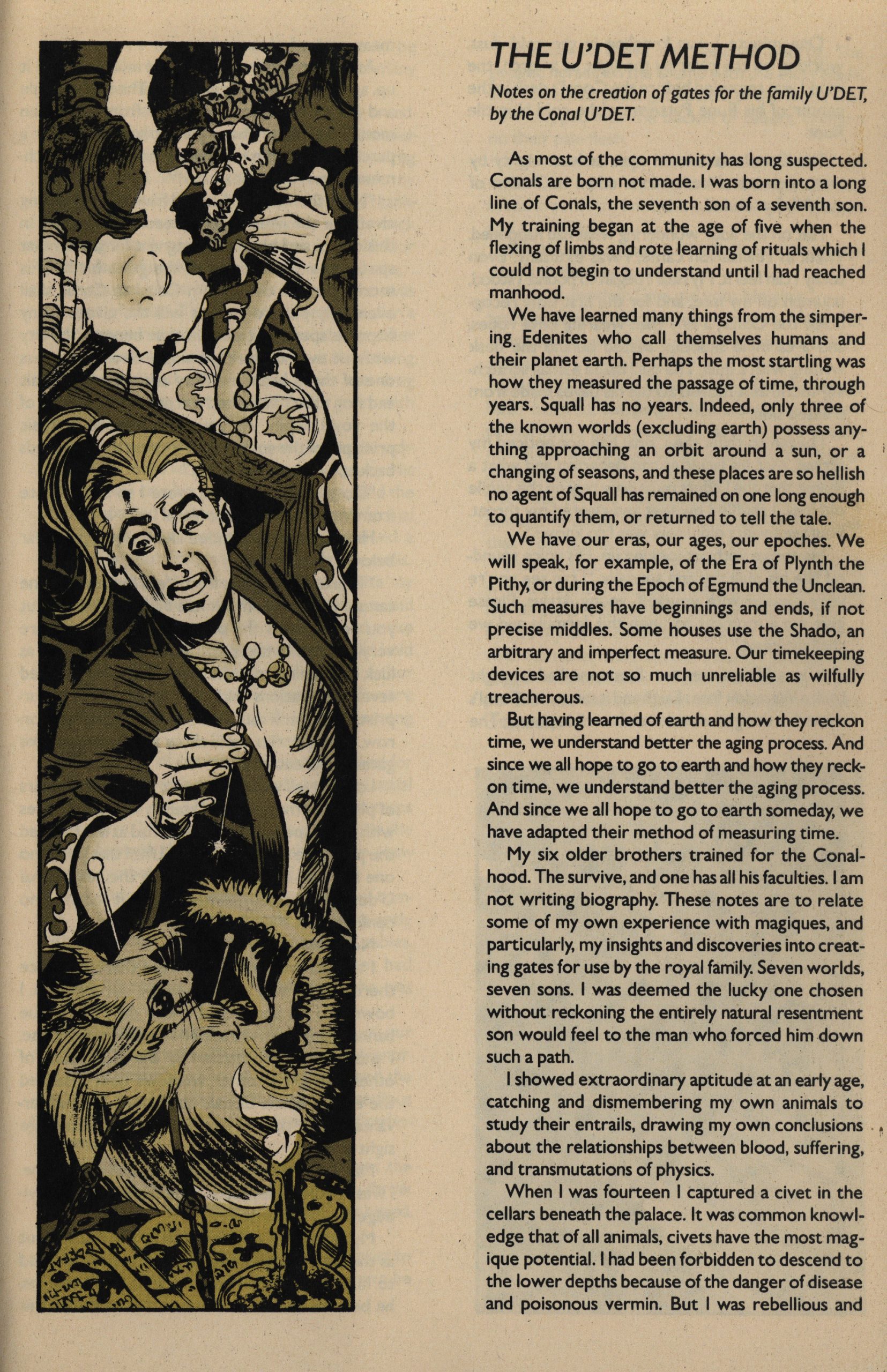 There’s a whole bunch of text pages in the back of each issue, where we… apparently learn a lot about life in these other dimensions? I say “apparently” because I couldn’t make myself read any of these pieces. 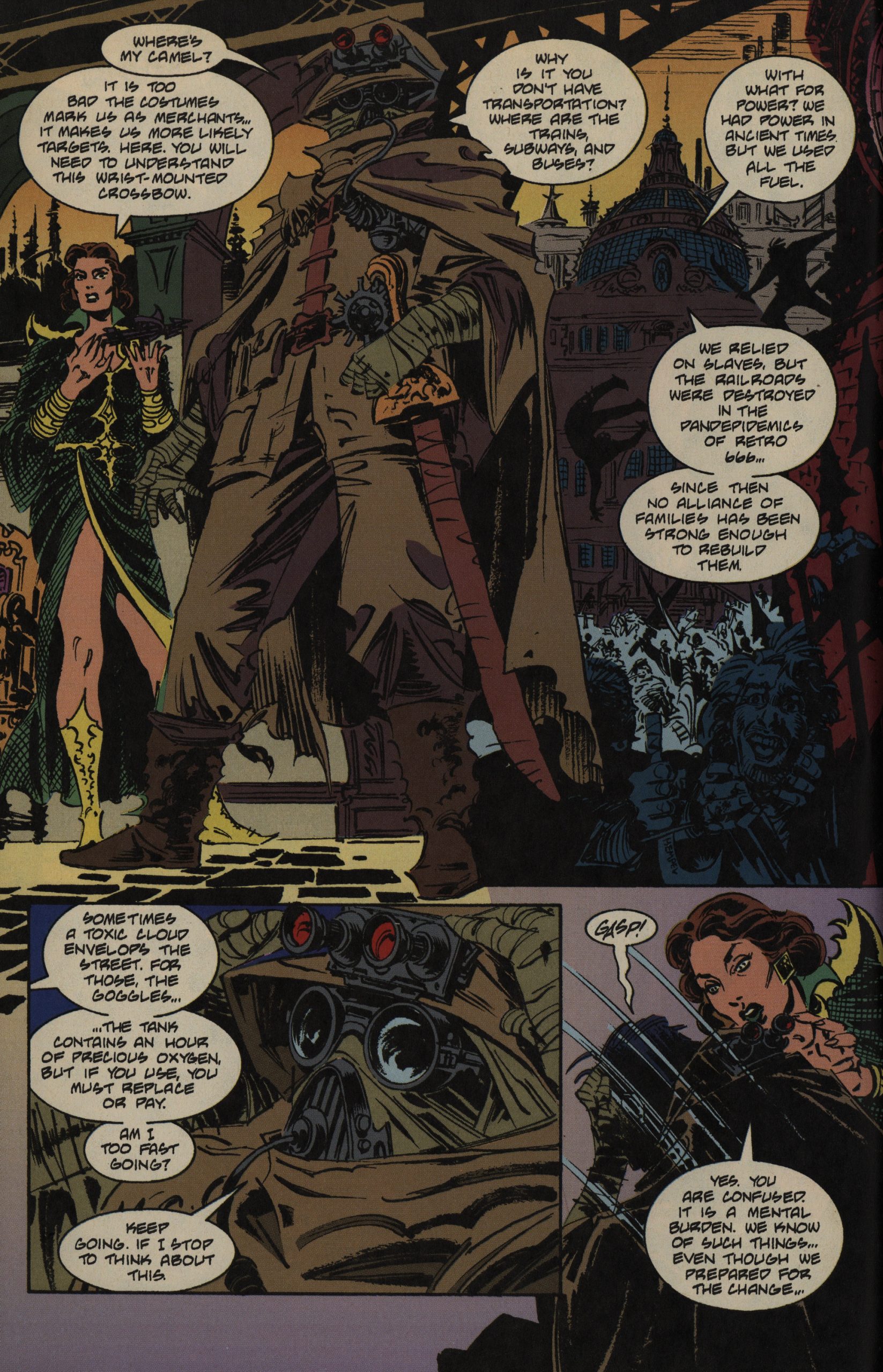 That is a quite stylish outfit. And it turns out that all the other dimensions are all yucky.

And they talk in… hyper-Yoda? 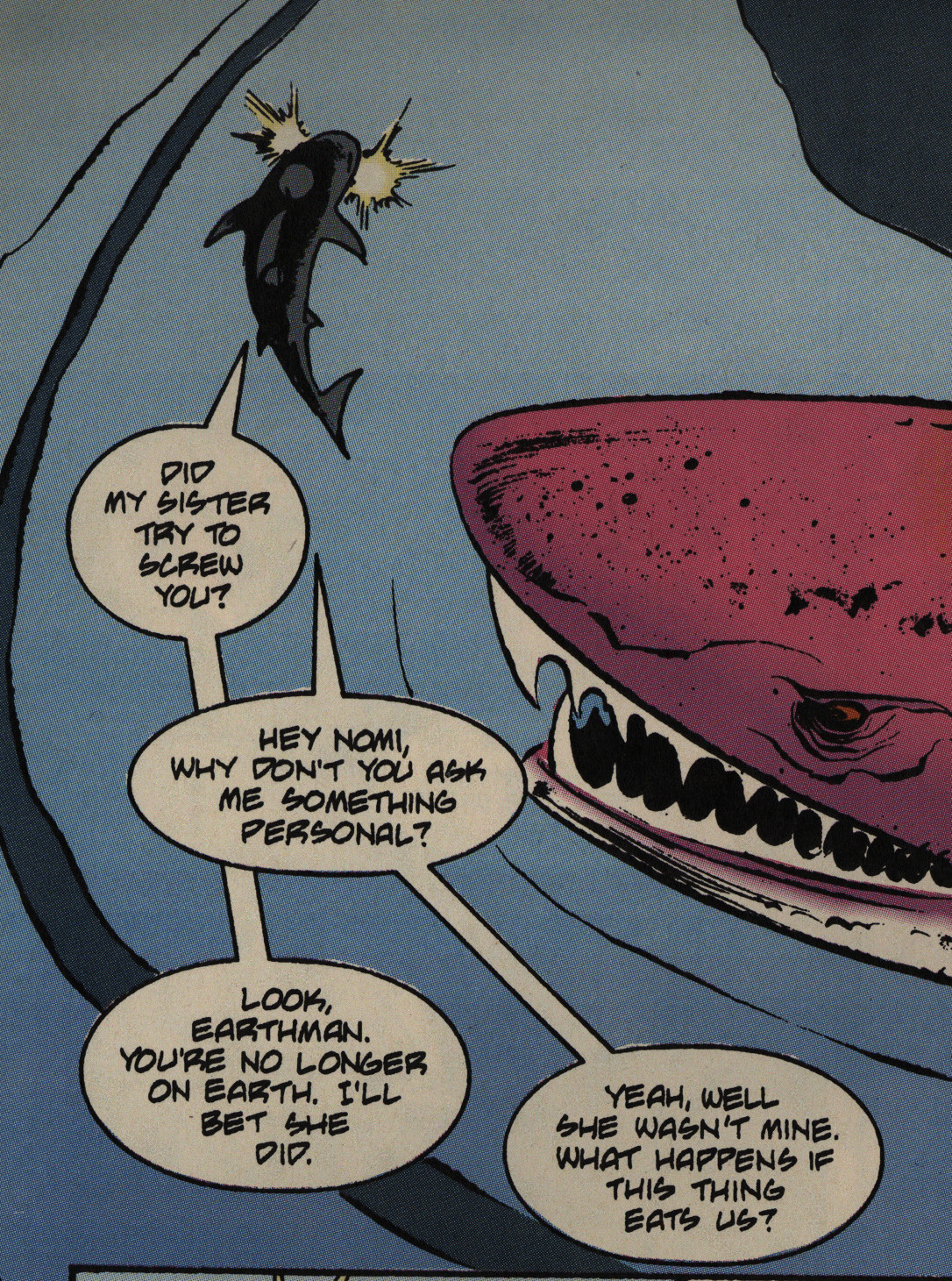 Even when the words come in the proper order, they still often don’t make much sense. 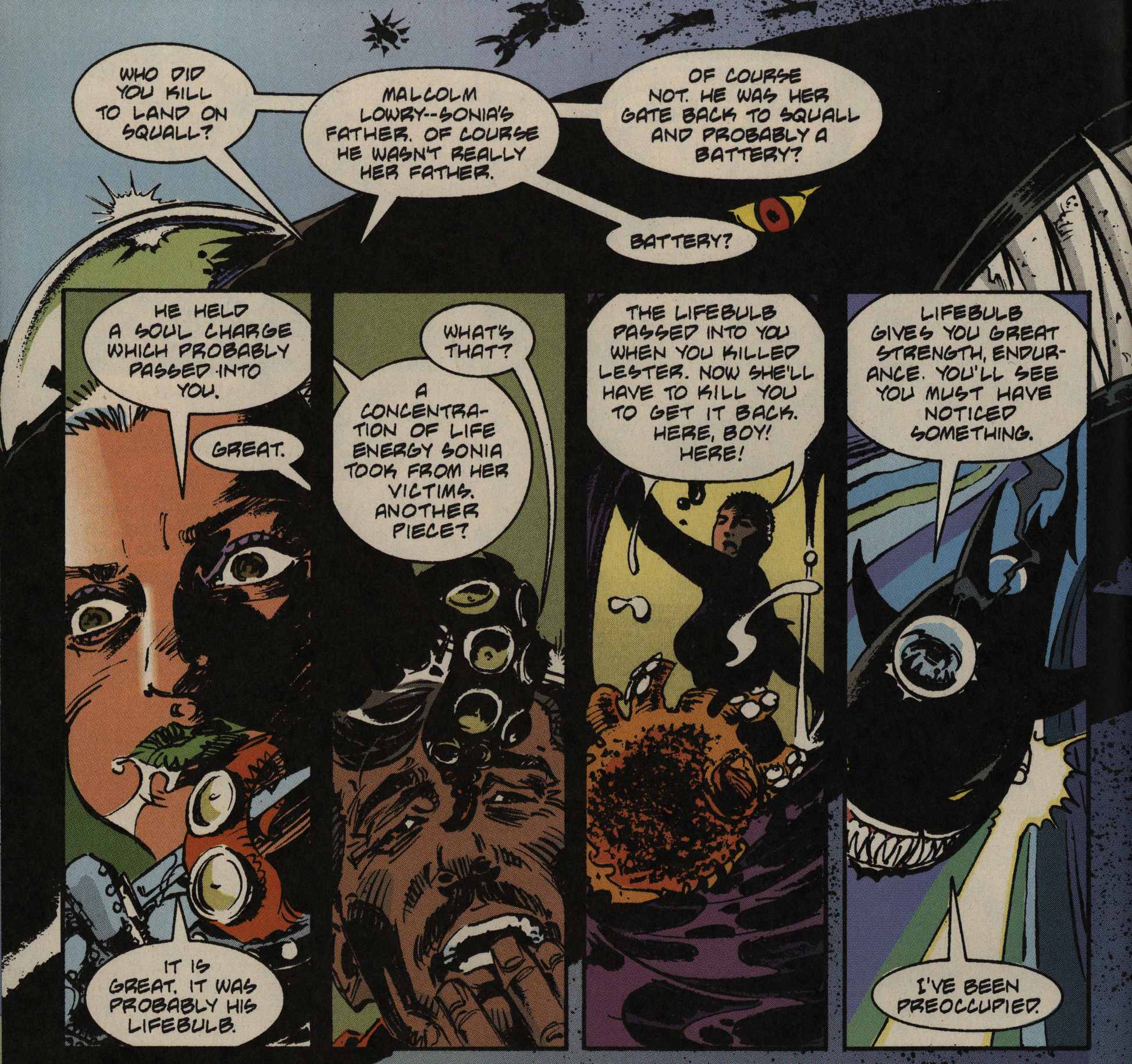 “What’s that?” His expression in that panel pretty much sums up my own expression while reading this nonsense. 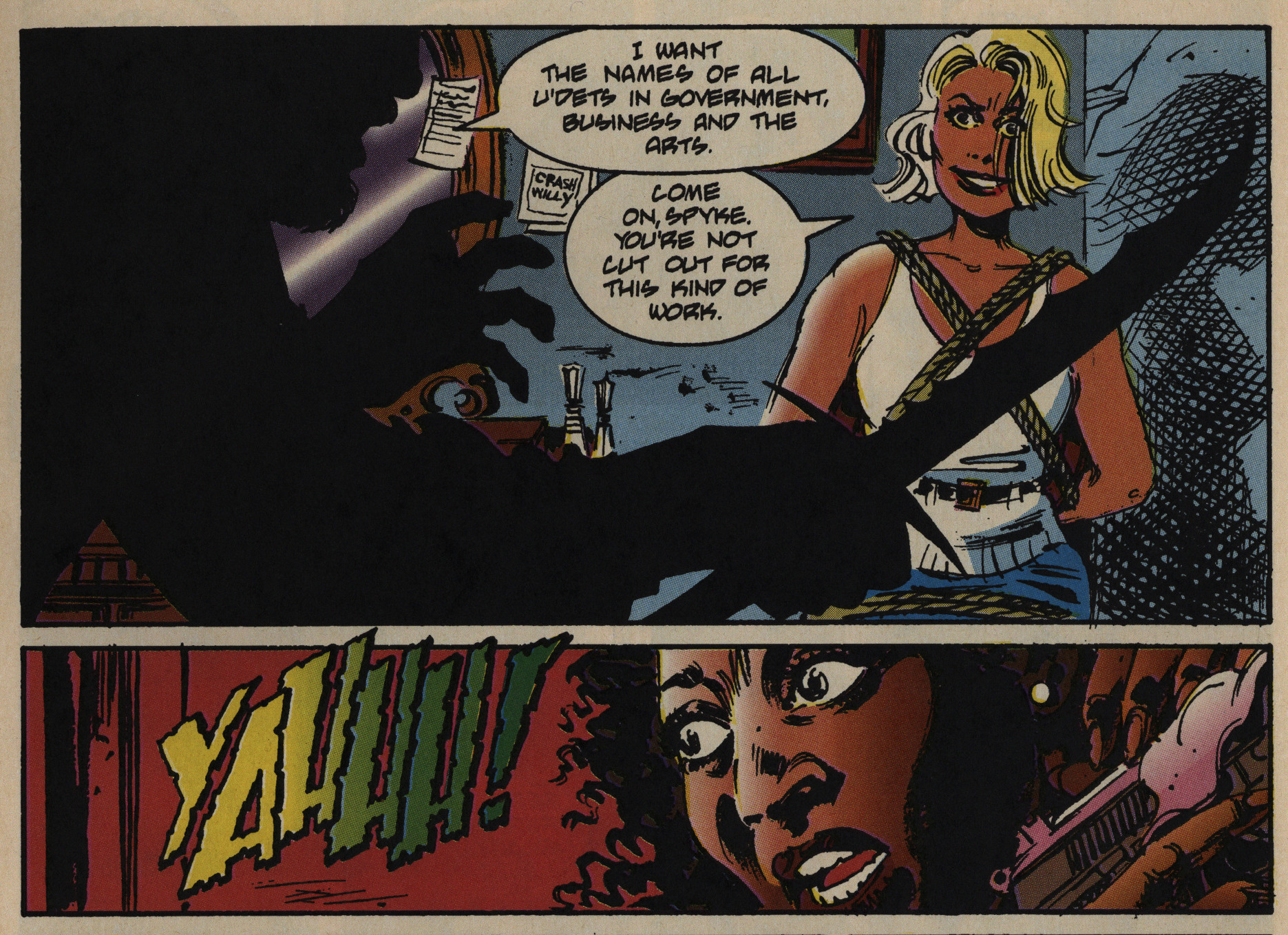 And of course the hero tortures the villain to get the required info. (She’s got a bobble-head now, so I guess the Jivaro shrinking process went to her body.) 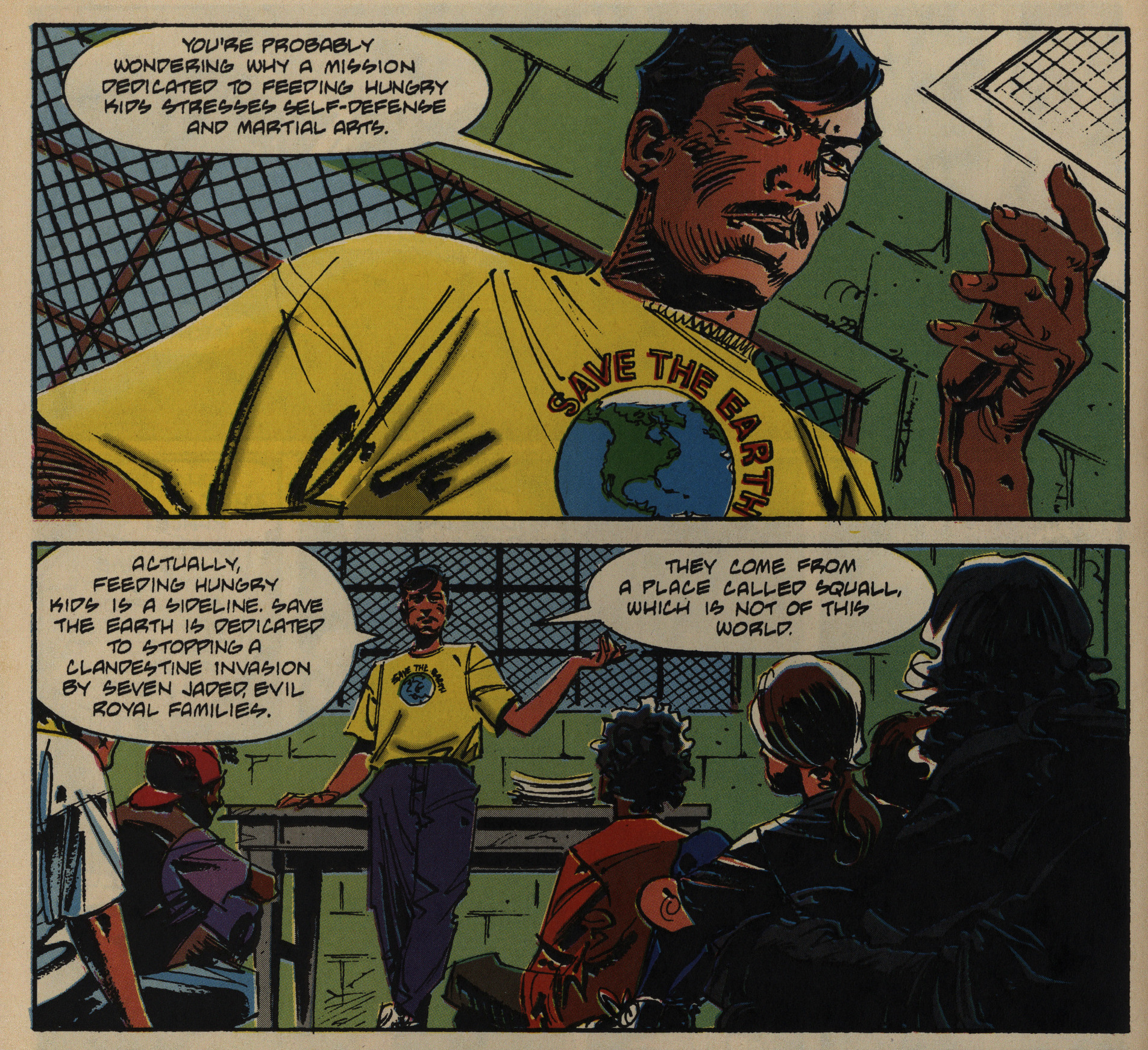 Yes. Yes, they did probably wonder about that. 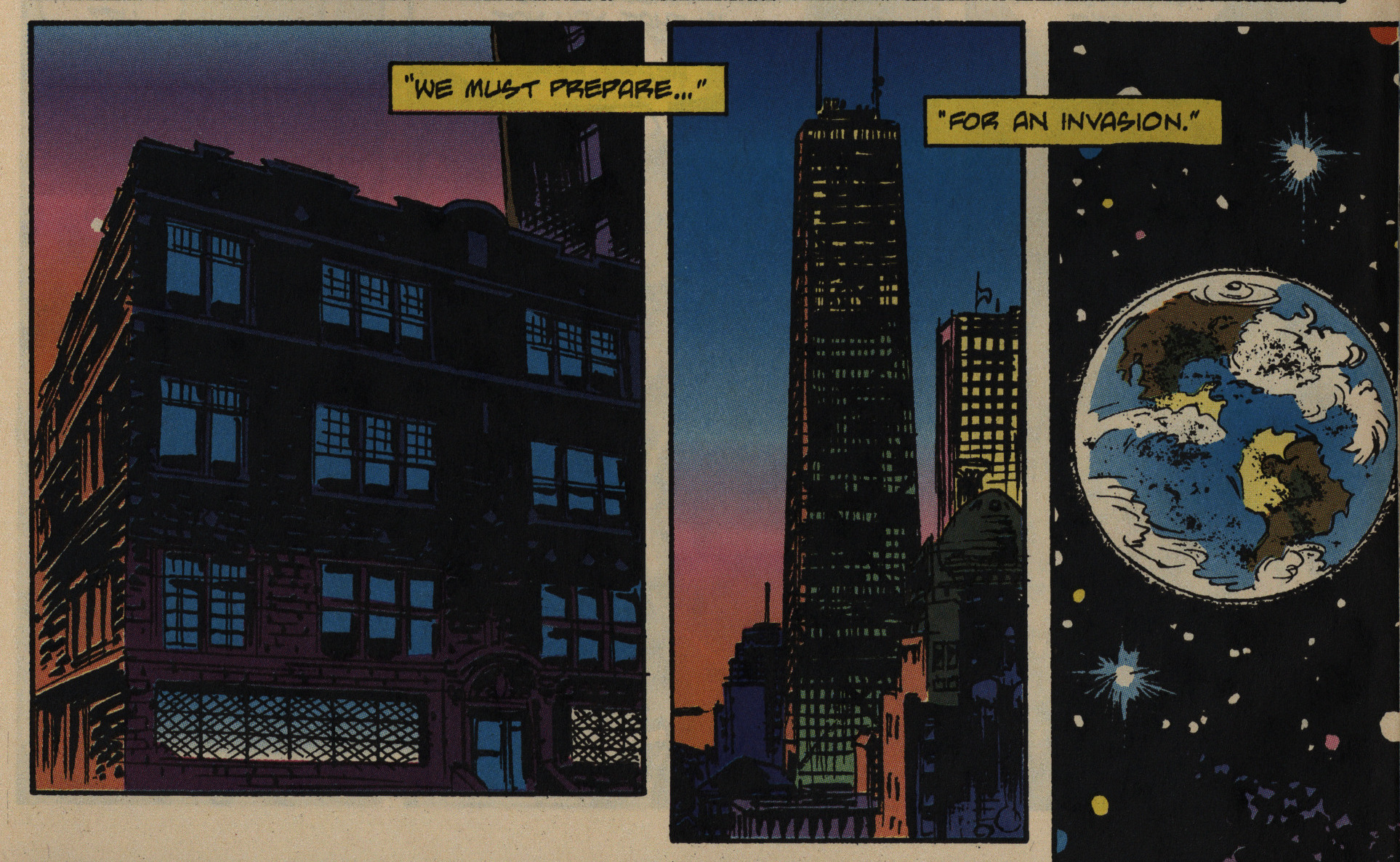 And then it ends.

Which leaves me with one question: Why? Why was this series ever made? It’s boring, it’s nonsensical and it just peters out.

OK, here’s another question: Was this originally pitched as an ongoing series, but when Epic got these issues they said “let’s just… stop… here” and published the four issues as a mini-series?

The series has never been reprinted or collected, so there is some justice in the world. 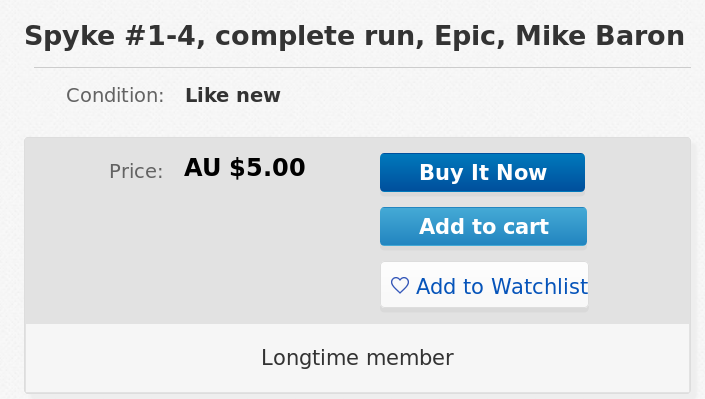 You can pick up the complete series for next to nothing.

I am unable to find anybody in the internet willing to admit to having read this series.