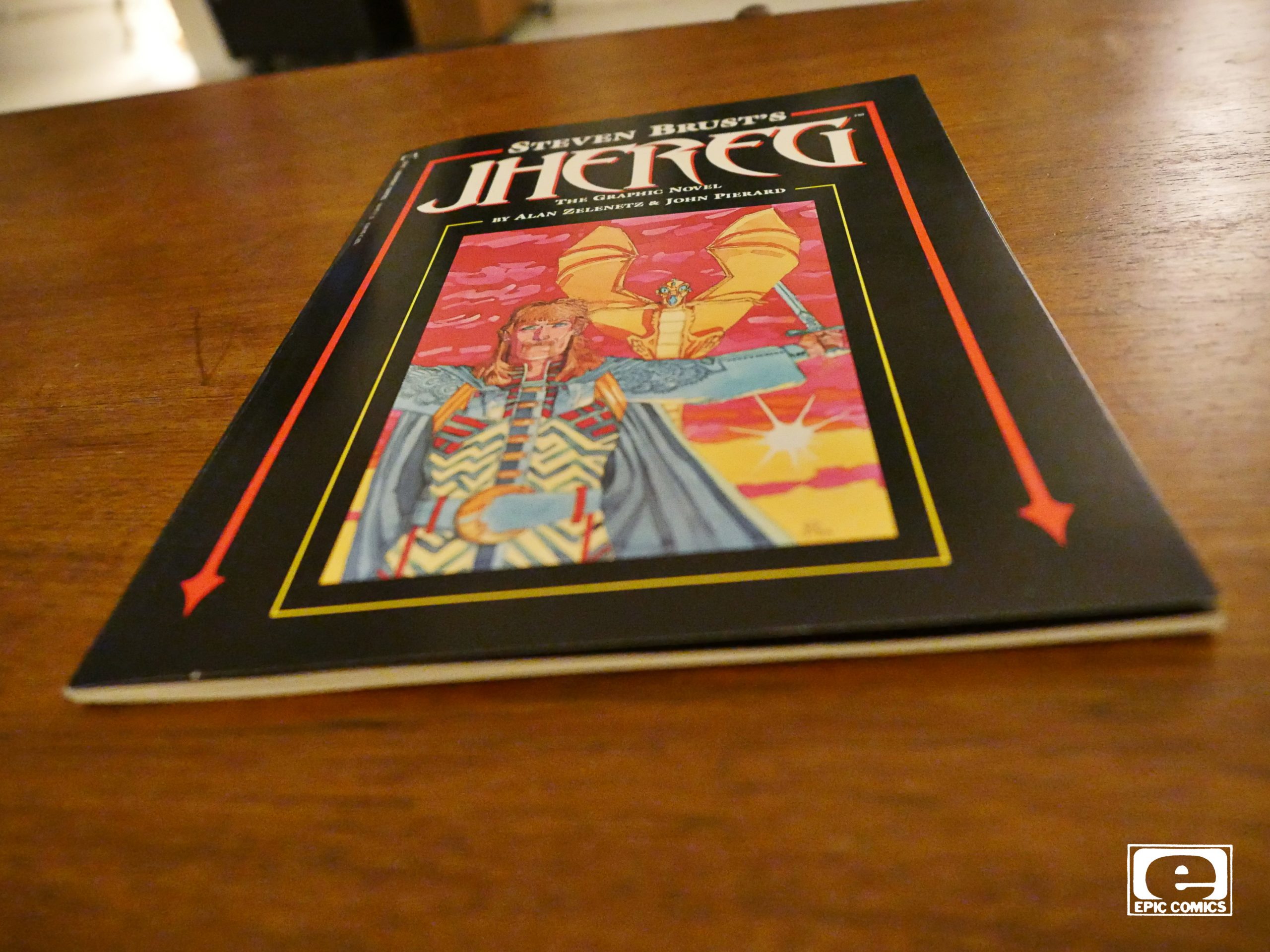 This is a Byron Preiss production. Preiss was infamous for trying to culture up comics, which resulted in many awkward adaptations of novels, and comics created by people who’ve never made comics before. I think Pierard is mainly a book illustrator? However, Zelenetz is a comic book writer, so perhaps this won’t be the usual Preiss experience… 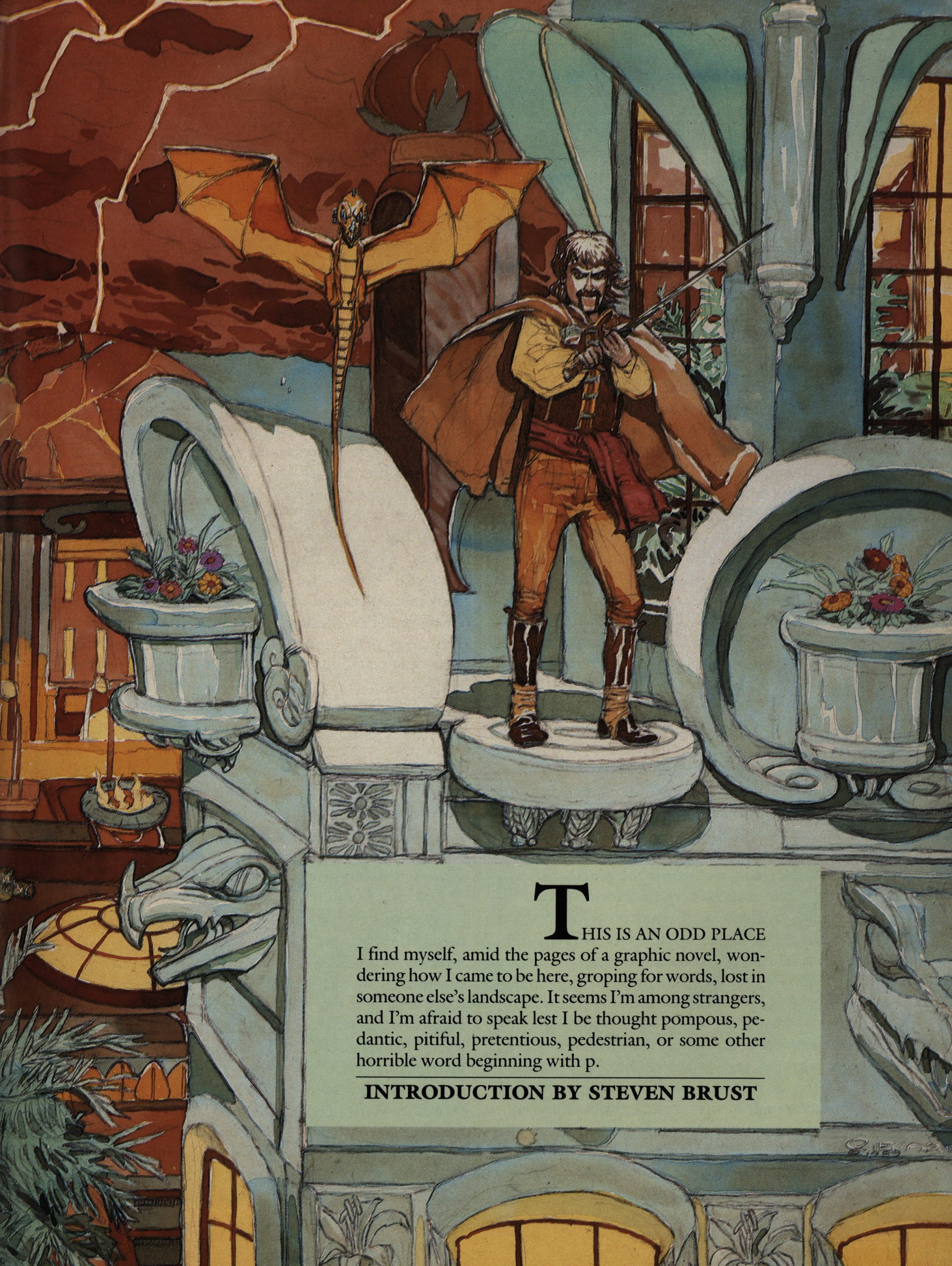 Author Steven Brust provides the introduction, but doesn’t really say much beyond some general platitudes, because he hadn’t seen the adaptation when he wrote the introduction. Which is super odd. 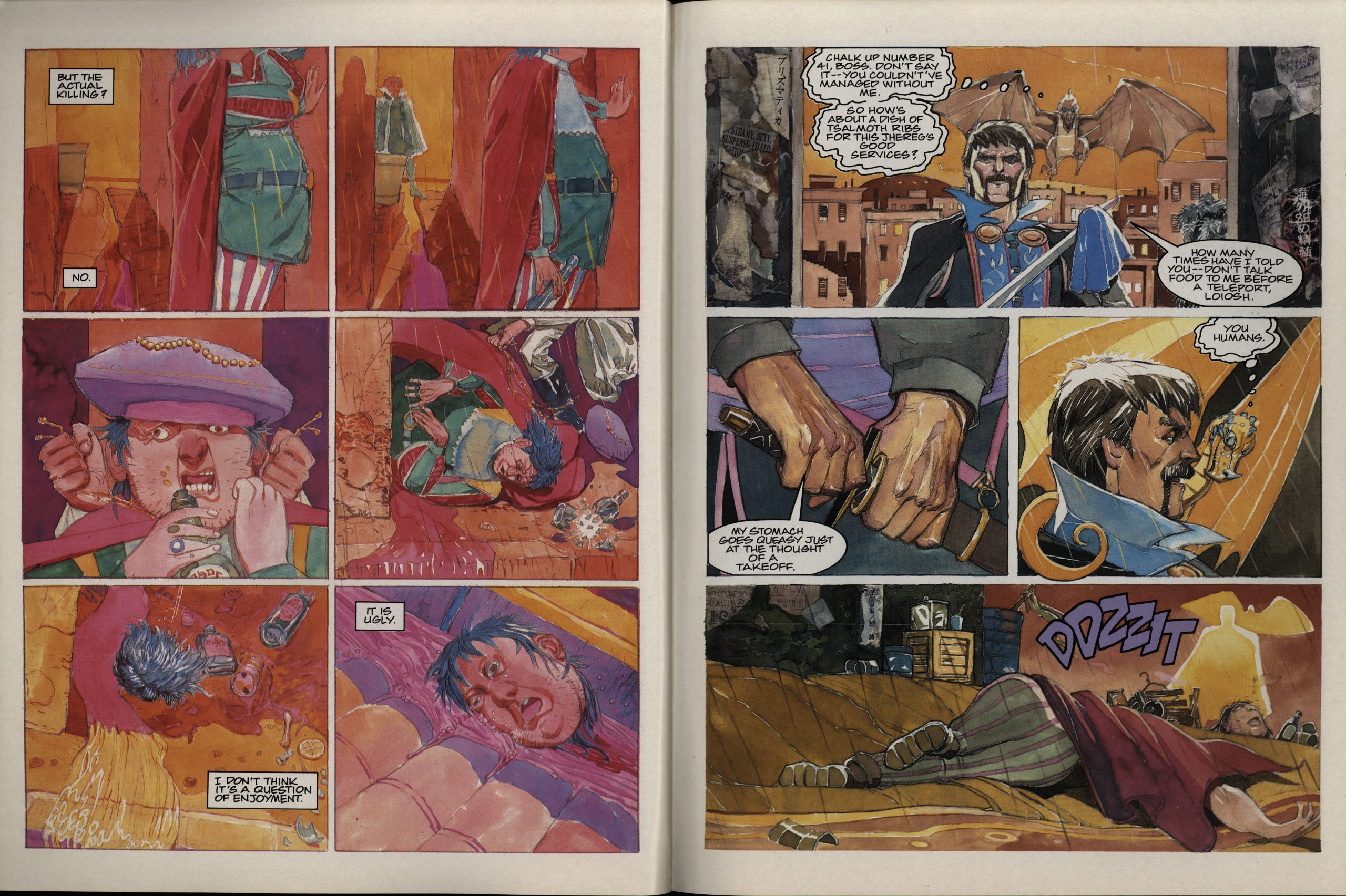 Anyway! I’ve read just about everything Brust has written. He’s very uneven, but when he’s good he’s irresistible. Jhereg is one of these books: It’s a book that’s so much fun to read that it makes your head reel. “Reading a book can’t be this much fun! It’s can’t! It’s impossible!” So adapting it into a brief graphic novel is a challenge, and they wisely steer clear of trying to retain the amusing patter (because the book is 90% amusing patter) and try to get the main plot elements in instead.

This makes for brisk reading, and it’s sometimes choppy waters. But the book is somewhat choppy, too, because Brust loves to keep people just slightly less than fully informed.

But look at those colours above there. No matter what you were expecting from an adaptation of this book, I don’t think that’s what you’d expected. And perhaps Pierard hadn’t done comics before, but it’s got pretty good flow on a panel to panel basis. 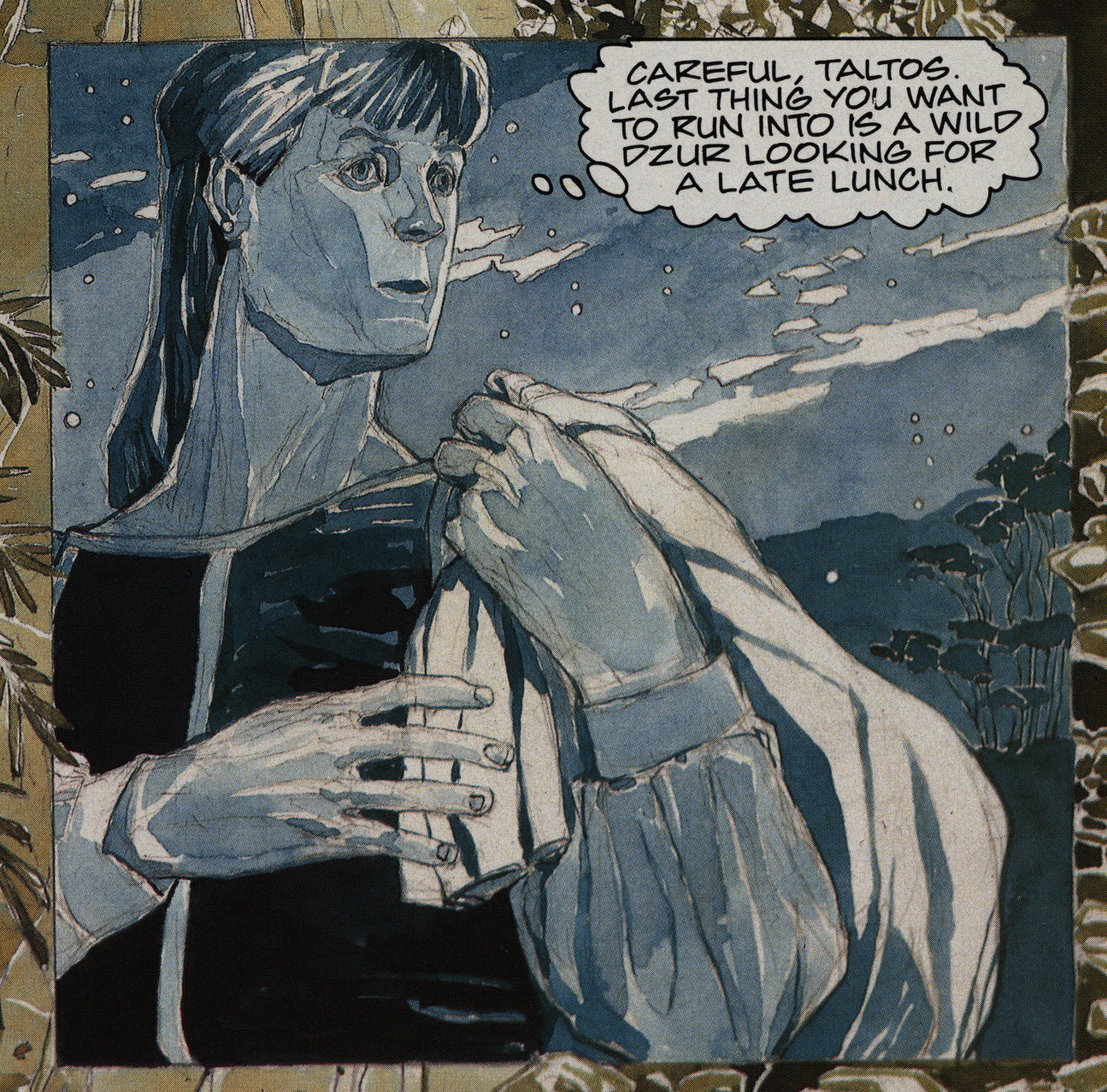 The characters do seem to veer a bit off model here and there, though.

Brust has great comic timing. Zelenetz cuts almost all of the jokes (because it’s just one bad joke after another), but when he does retain one, somehow the timing just seems… off… I guess this kind of repartee only has a cumulative effect and doesn’t really work in isolation. 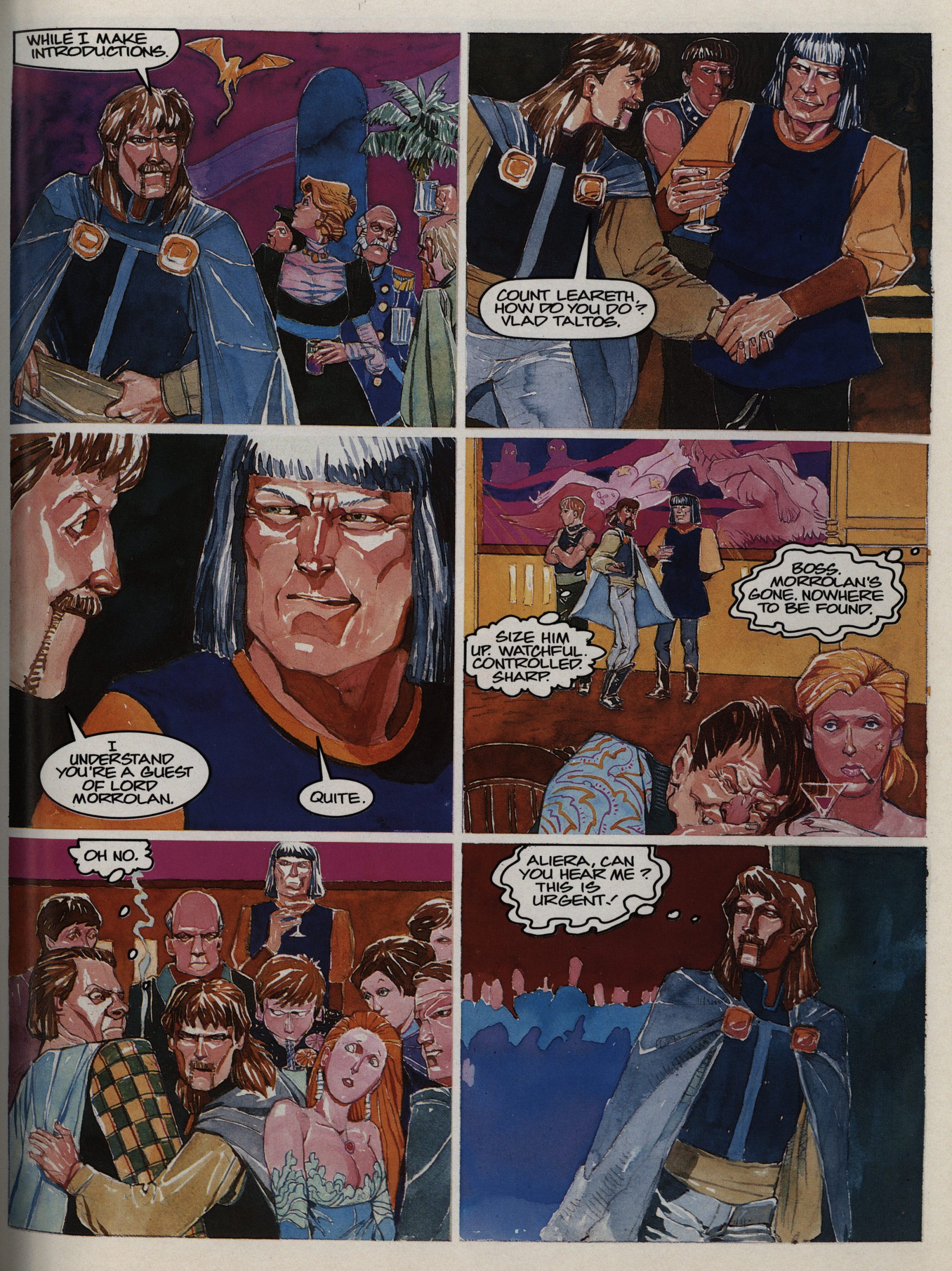 No matter, I really enjoyed this adaptation. I don’t know whether it makes any sense whatsoever to somebody who doesn’t know the book: The page above seems somewhat oblique, for instance, in that Vlad goes into full panic mode when he hears that Morrolan is missing, and we’ve been given no hint of why that would be significant.

But things are cleared up pretty soon, anyway.

This book has never been reprinted, so perhaps I’m alone in my appreciation. Or perhaps it’s tied up rights-wise — Preiss, as well as Brust and the creators, all seem to have copyright on parts of this.

The general opinion on the book seems quite low:

Oh god, it’s bad. It’s so bad. And yet it’s still a graphic novelization of Jhereg and therefore I still love it.

Fault #3: If Alan Zelenetz and John Pierard are fans of Brust’s work or even actually enjoyed the novel they have sought to capture in graphic format, no evidence of said enjoyment comes through in the novel itself. More accuracy, attention to detail, artistic integrity, and story depth are standard fare in an issue of a “Conan” comic. “Spellbreaker” becomes “Spellbinder”, Morrolan grows a beard, Sethra becomes a hag, and the artistic style is less that of art than that of an illustrator of children’s books who has lost all but the most garish of his or her water colors.