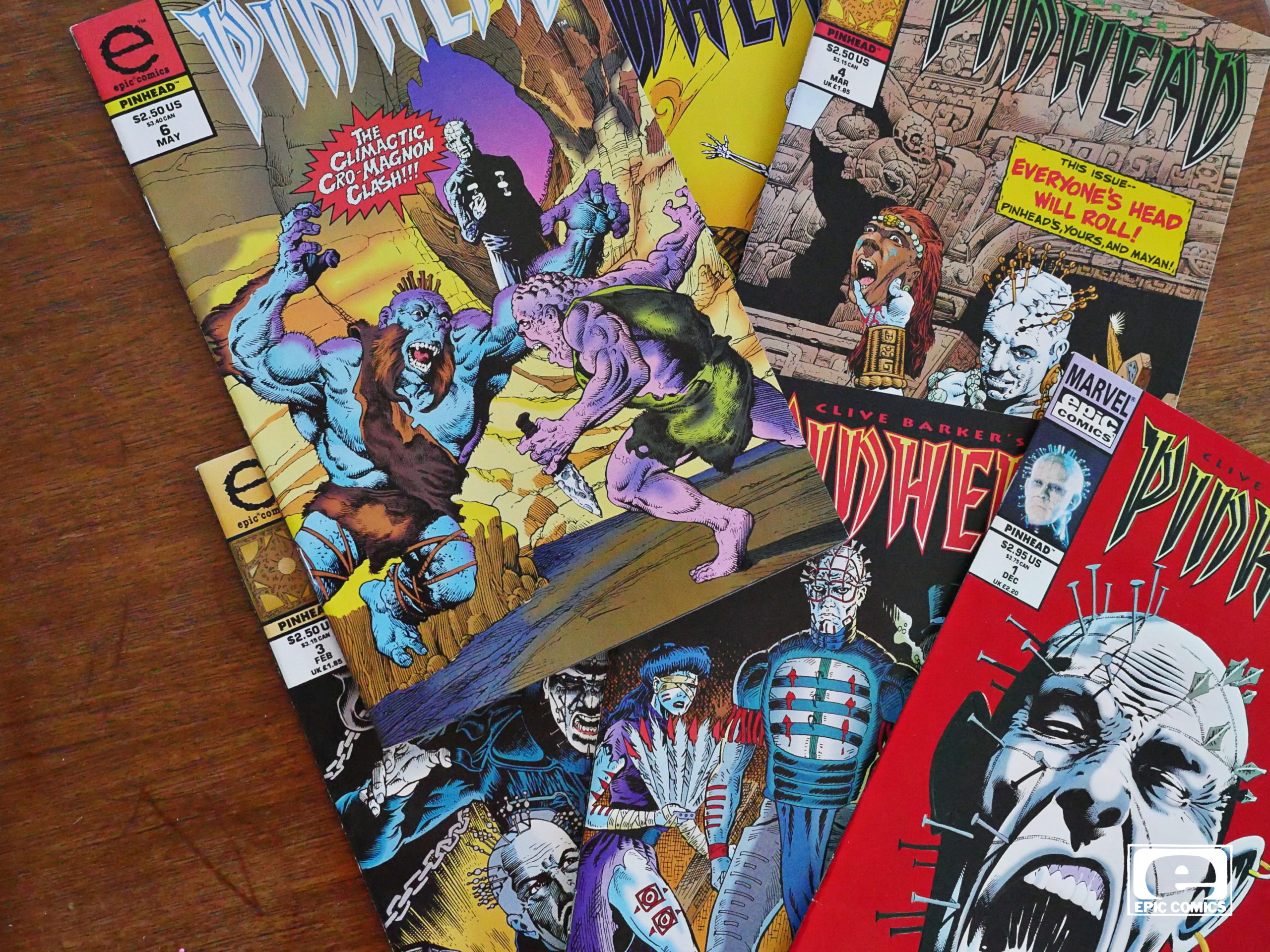 Hm… Marvel didn’t seem to have much faith in the branding of this series: 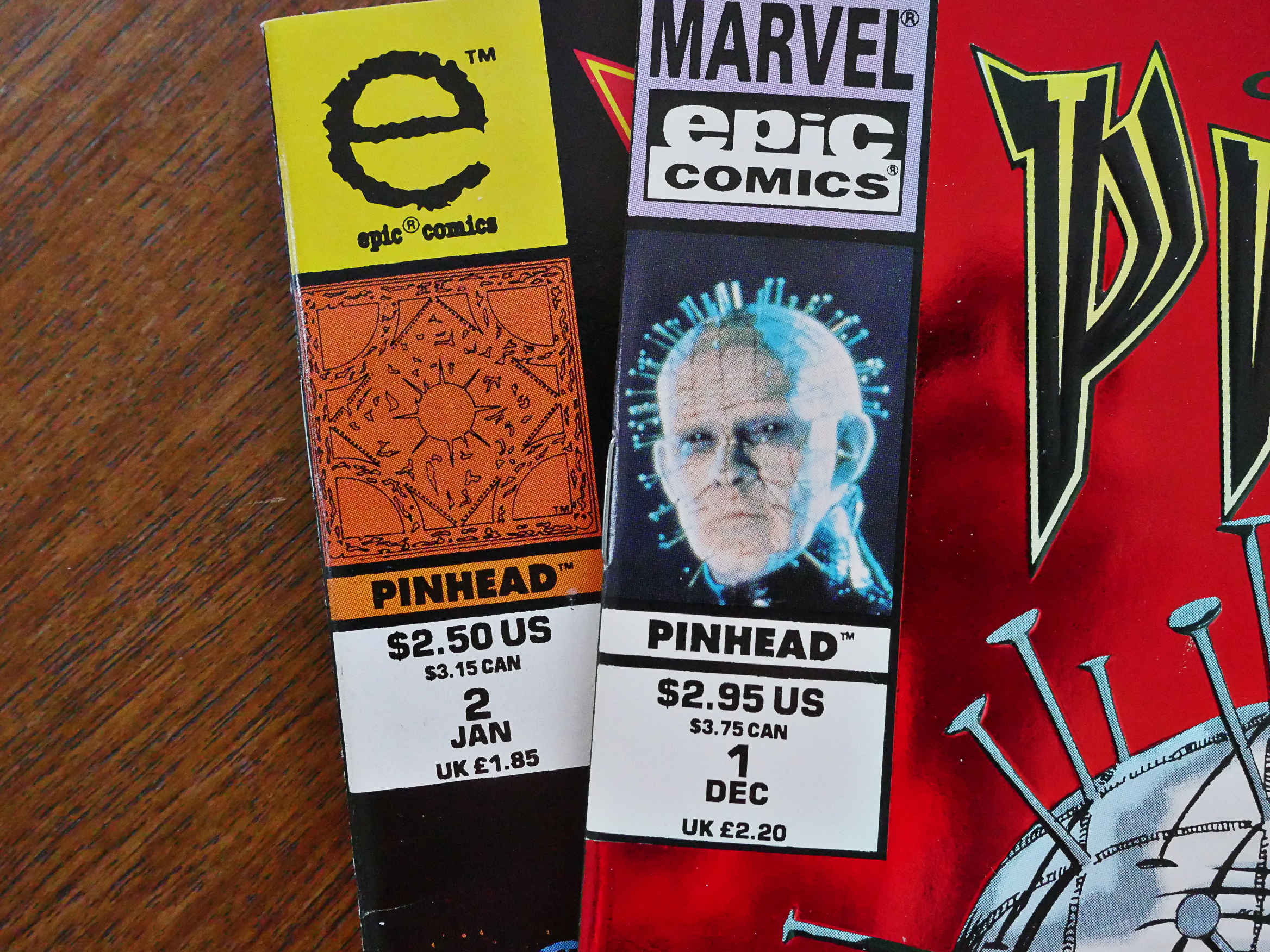 The first issue says “Marvel” prominently and then uses the old Epic logo, while the subsequent issued use the new, “edgy” Epic logo only.

Anyway, my first thought upon opening this book was “nooo! not another Chichester book! nooo…” Chichester has perhaps not written the absolutely worst of the worst Epic books, but he’s consistently tedious. He started off working for Epic as an editor, so perhaps that lead the other editors at Epic to say “yeah, whateves” which whatever new boring plot he came up with? 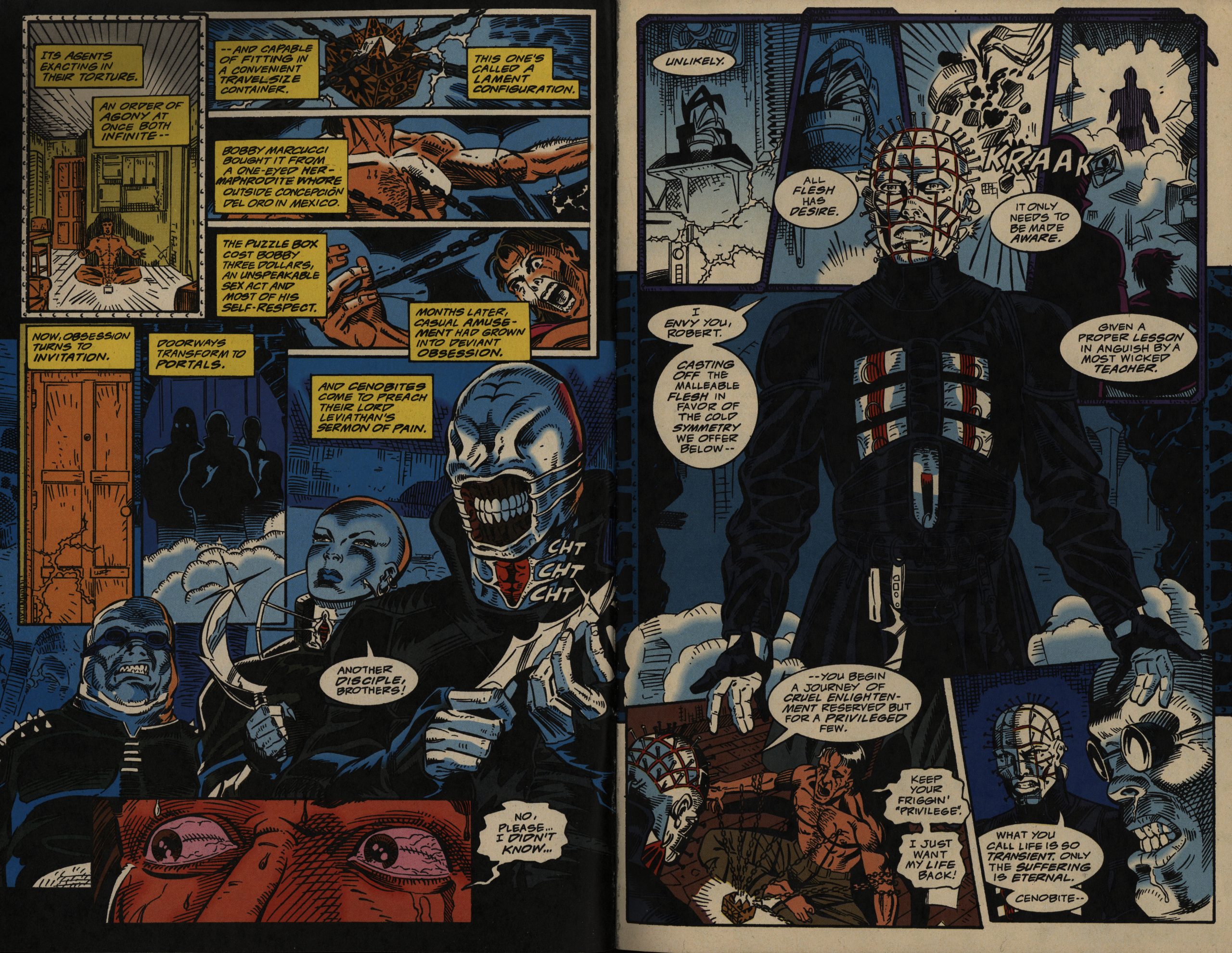 His stuff is so overwritten and humourless. Now, humour may not be what you’d expect to find in an Hellraiser book (except inadvertently), but these are new levels of turgid prose. 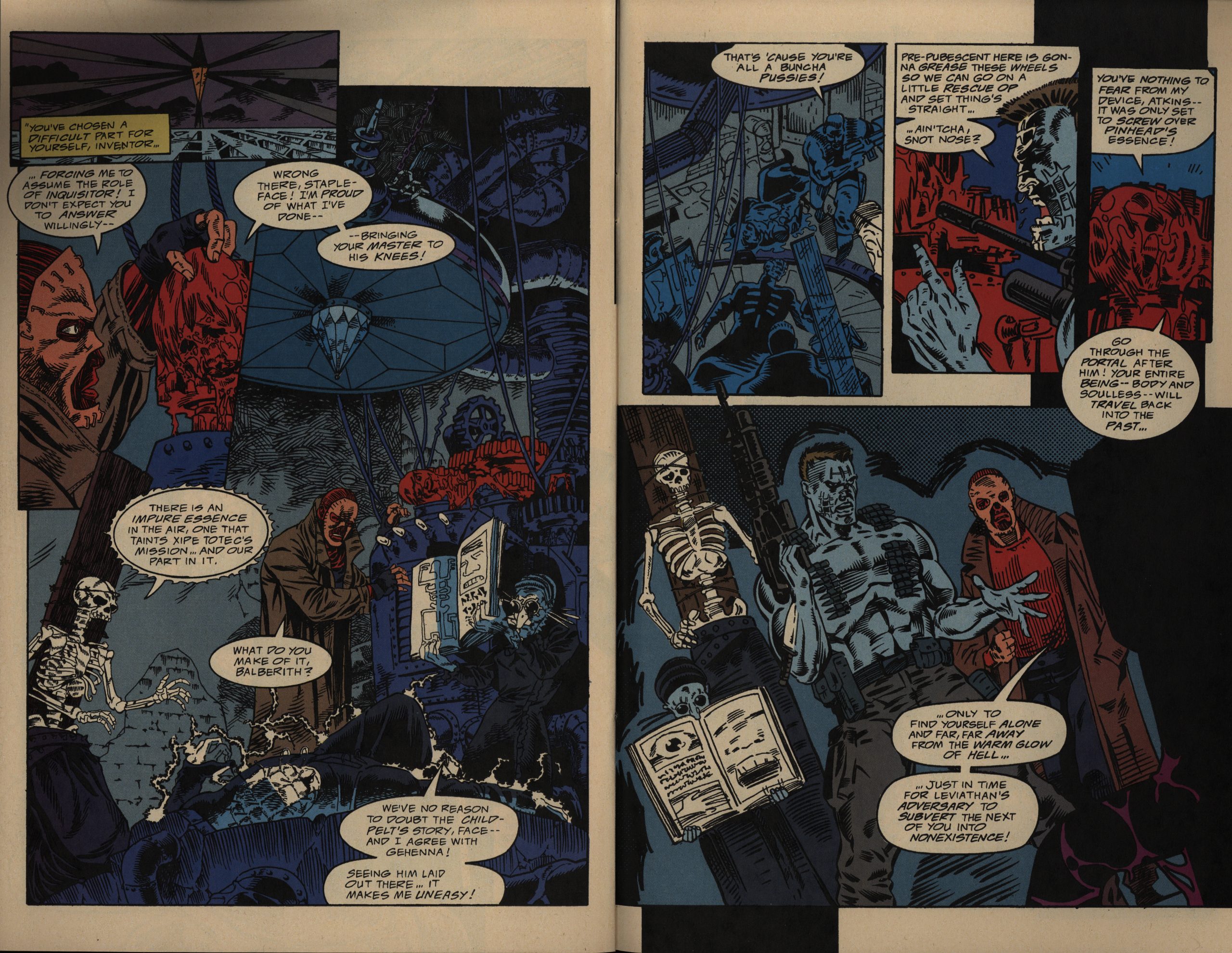 And unfortunately, Chichester brings back his own super-duper lame Cenobite creations, like The Old Lady With The Glasses (scary) and The Vietnam Vet With The Gun Who Just Never Shuts Up (so scary).

Carrasco’s artwork (it’s spelled variously over the issues, but that’s the spelling used in most of them, I think) is OK, especially when inked by Villagran. There’s a lot of blood, viscera and torture on the pages, and it looks pretty yucky. Which is what you’re going for, right? The storytelling is pretty clear, but there’s often amateurish word balloon placement which leads the eyes astray. 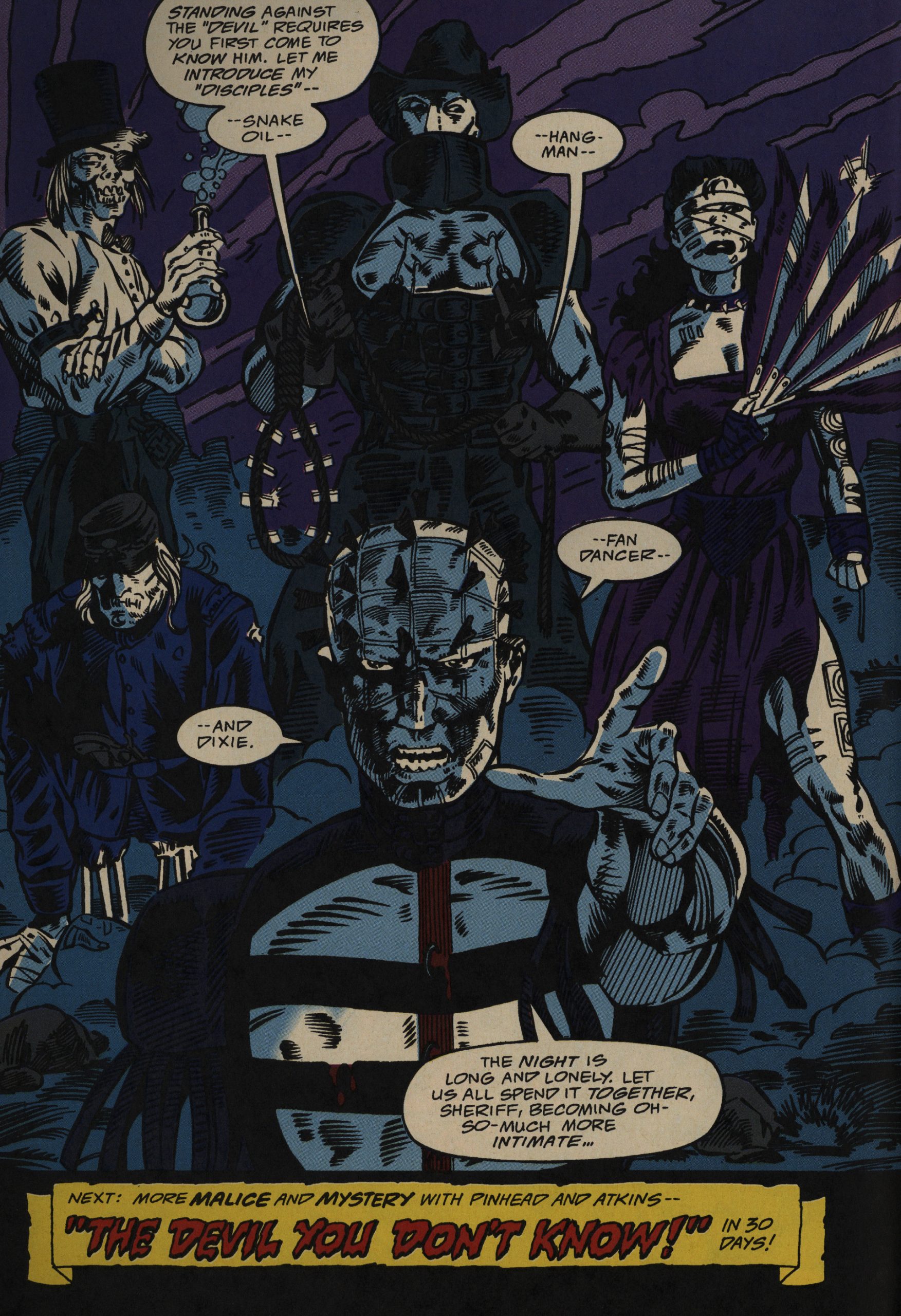 But don’t worry, he comes up with a new bunch of lame Cenobites, like… The Guy With A Flask, The Guy With Weights Hanging From His Chest, Knife Lady and Guy With No Legs.

You see, this is a time-travel Hellraiser story, so Pinhead goes back in time to visit older incarnations of himself to… save Hell from a do-gooder. It’s not a bad concept, really. 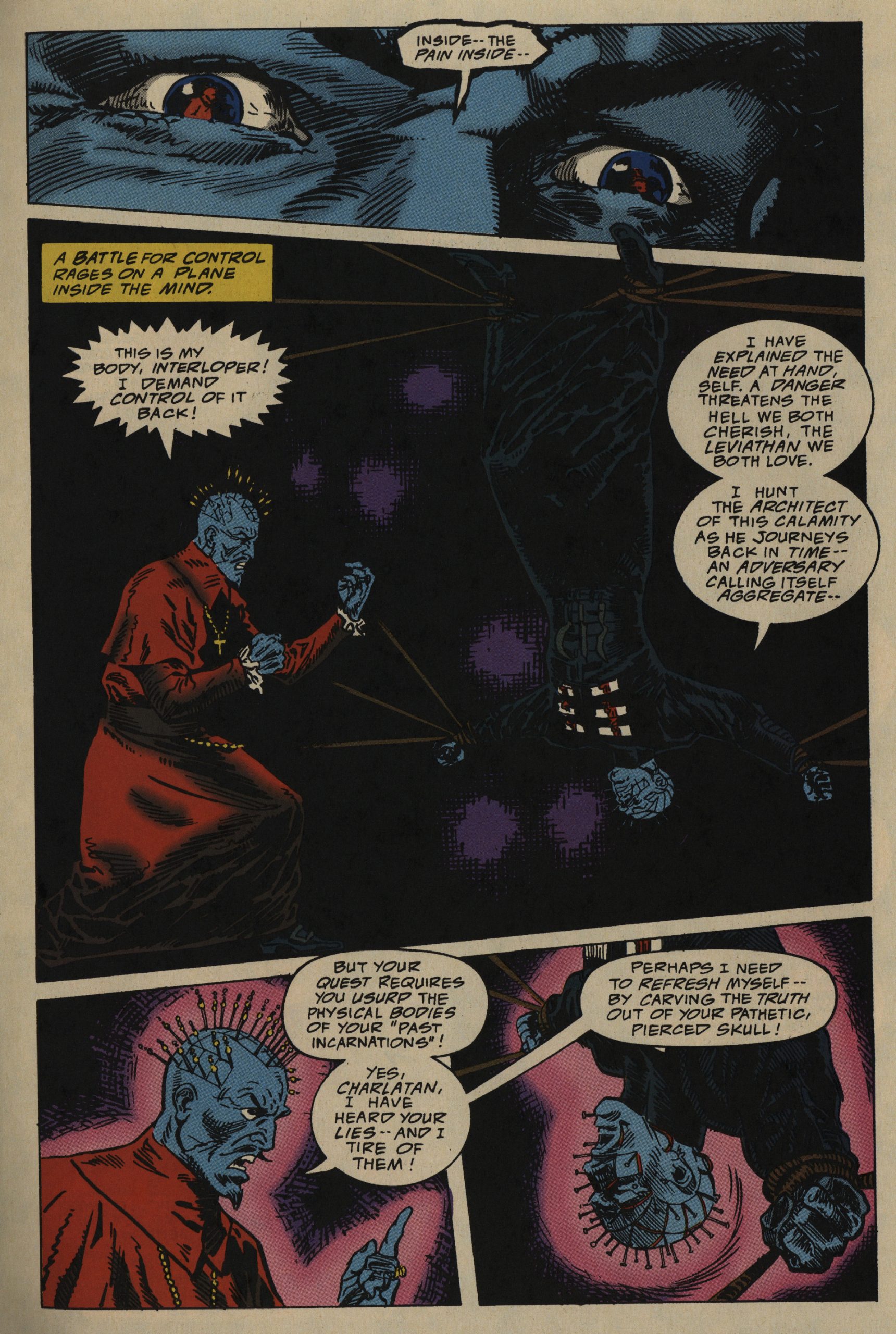 The execution is, though. In each time period (i.e., issue) we meet up with a new blue-skinned guy with things poking out of his skull. So here we have… urr… I don’t know… cocktail forks? 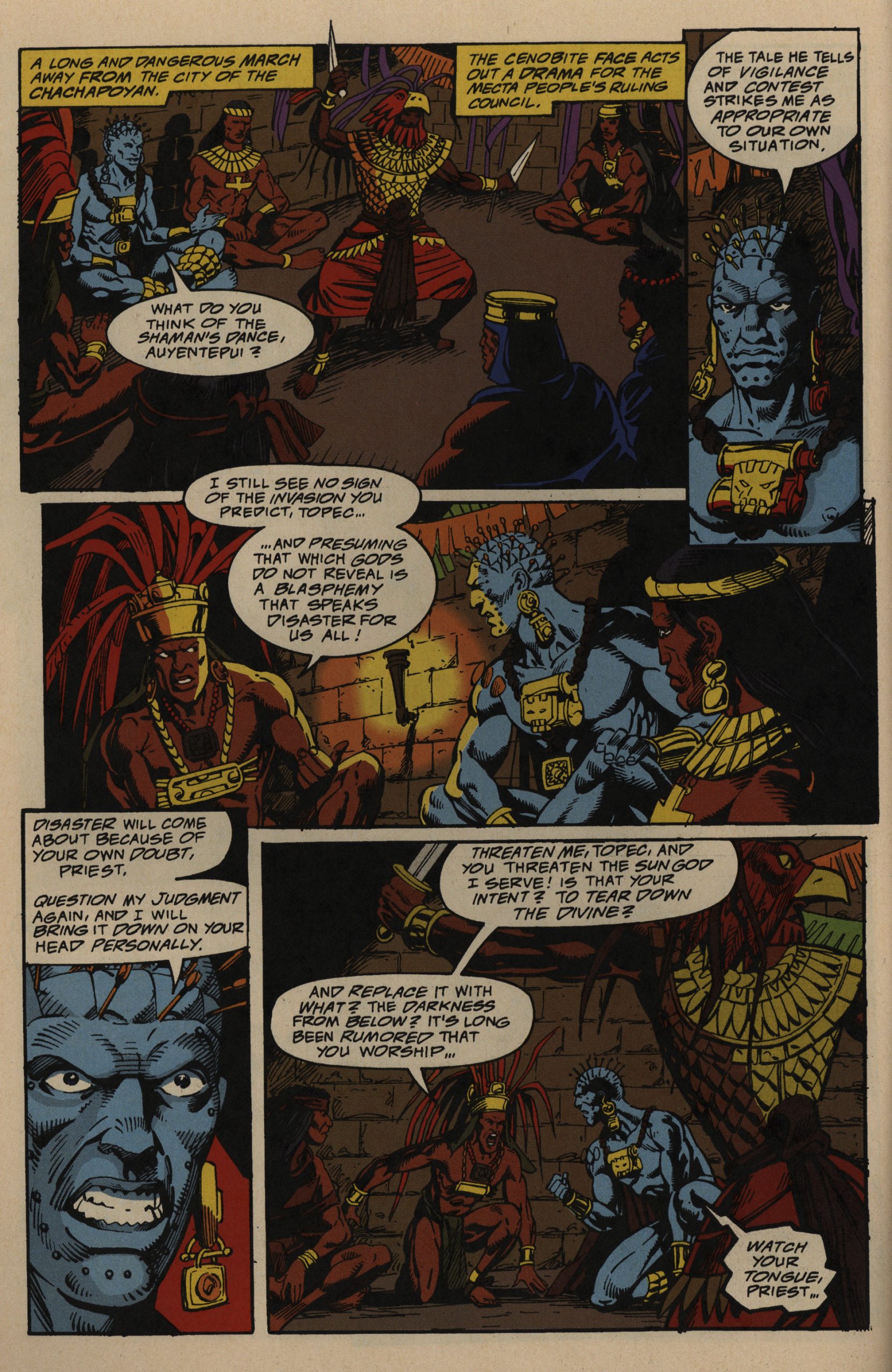 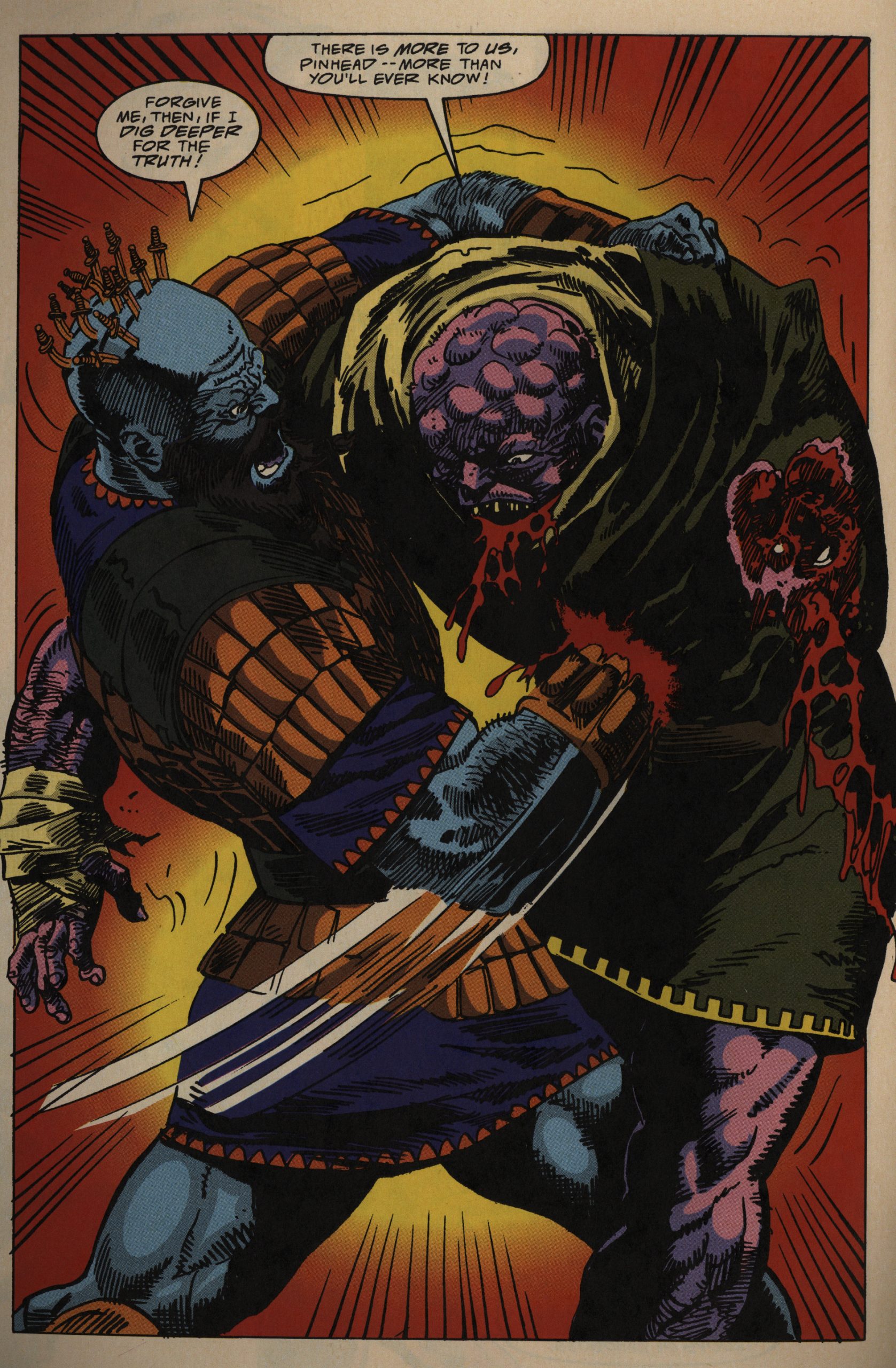 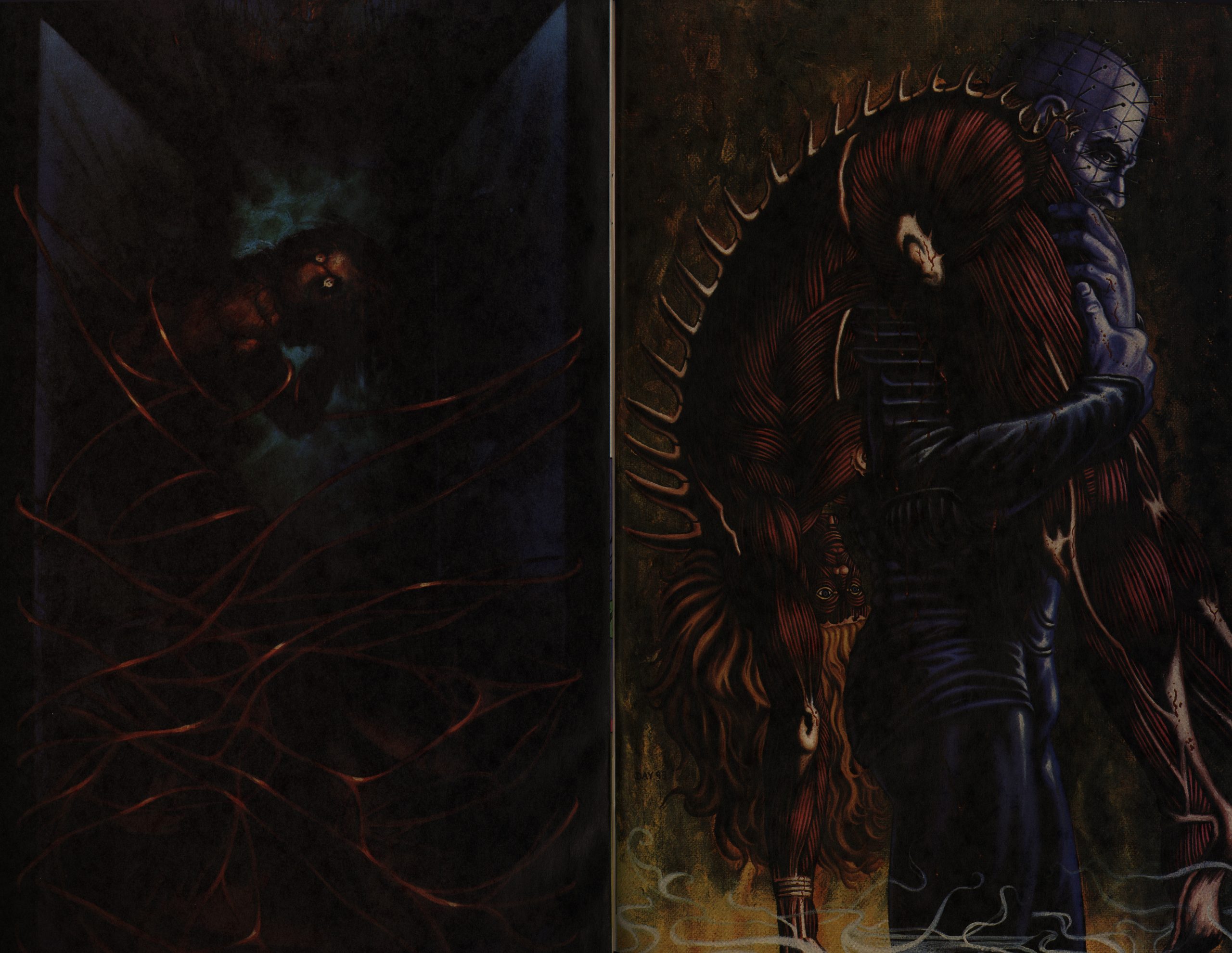 In the final two issues, they thankfully fill up some pages with pin-ups instead of using all the pages for the tedious story.

Bone spurs in the stone age!

The series is perhaps more episodic than it should have been — there’s little sense of progression over the issues. The do-gooder collects one magical item per issue, and then tries to use them in the final issue — fine. That’s a very common structure. But without anything more, it can get really repetetive. It gets really repetetive.

*phew* After this, I never have to read any Marvel Clive Barker books again! Whoho!

For some reason or other, this series is pretty expensive to buy now: 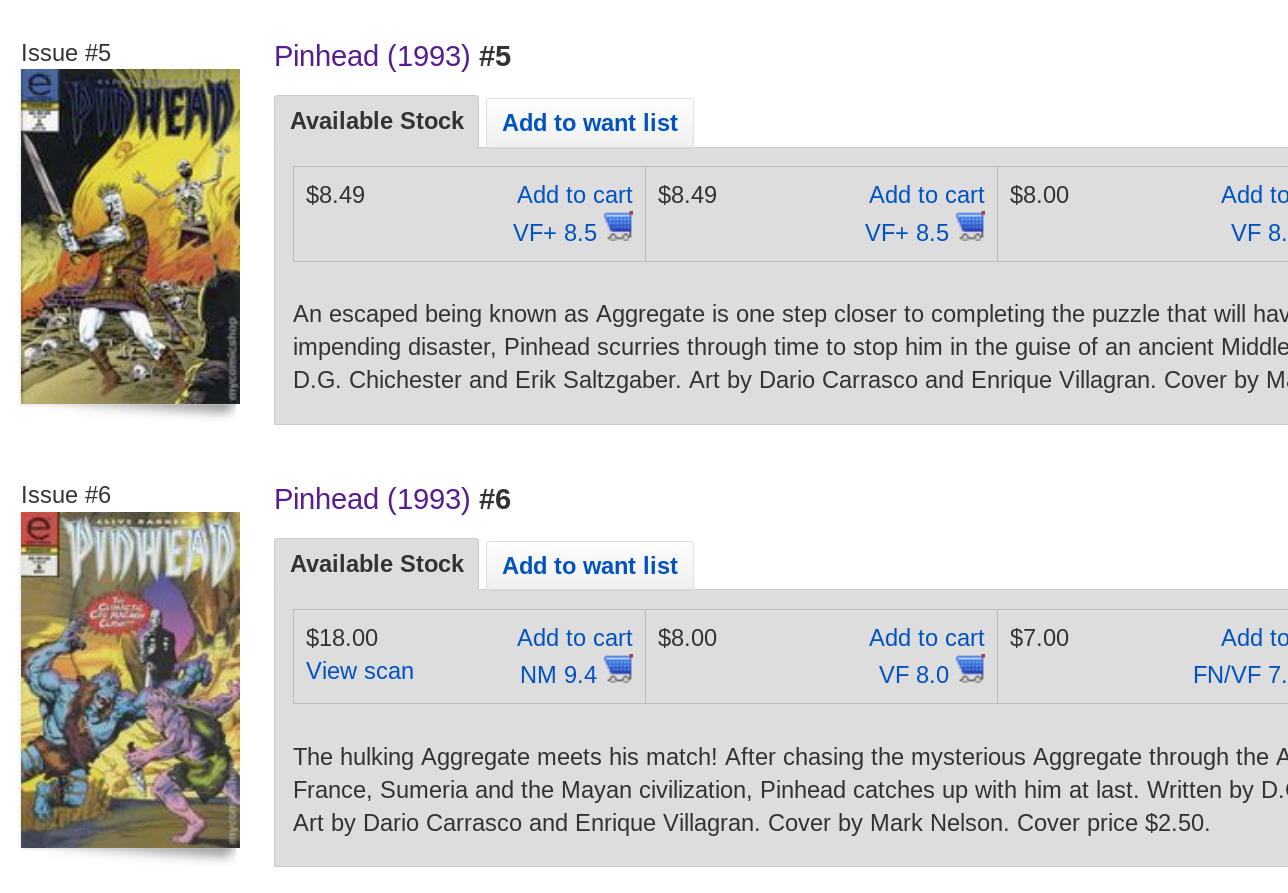 So I guess that people liked it? Or is it the cover art?

This person read the second issue:

It took me the entirety of the rambling issue two to piece together exactly what was happening and what had come before. I don’t dare throw you into the water without floaties, though, because this book could sink many people’s interest before you find the right stroke to stay afloat.

Don’t read that blog, though, because it would take more time reading that recap of the plot than reading the issue. I don’t think they much liked it?