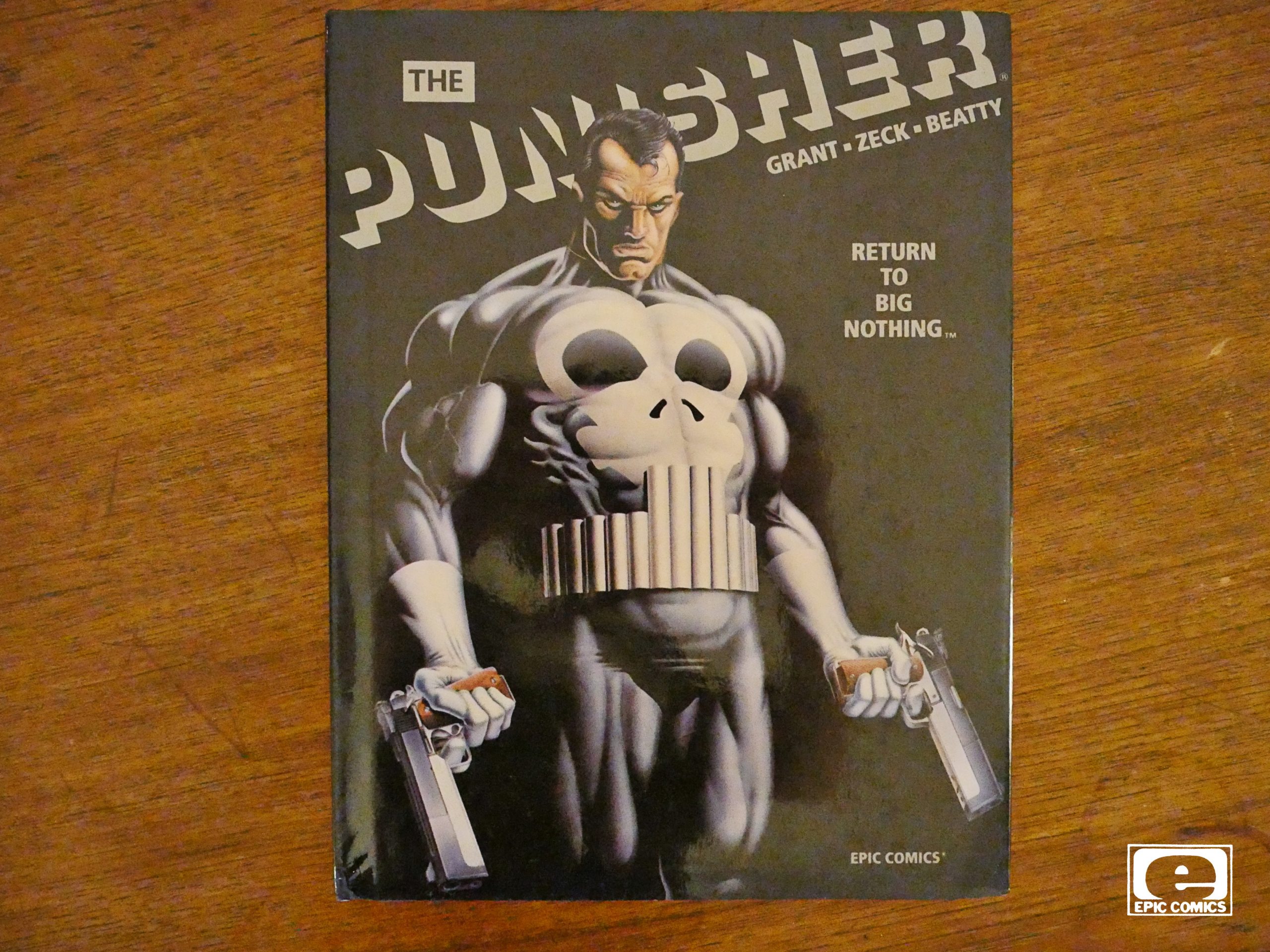 The Punisher: Return to Big Nothing (1989)
by Steven Grant, Mike Zeck and John Beatty

If I’ve got the chronology right, Epic would only publish one single Marvel character after this (the Elektra Lives Again graphic novel), so I take it that the experiment with publishing slightly more upscale (or “mature”) Marvel comics under the Epic label was a failure.

And it’s really difficult to understand why they didn’t just publish this as a Marvel graphic novel: 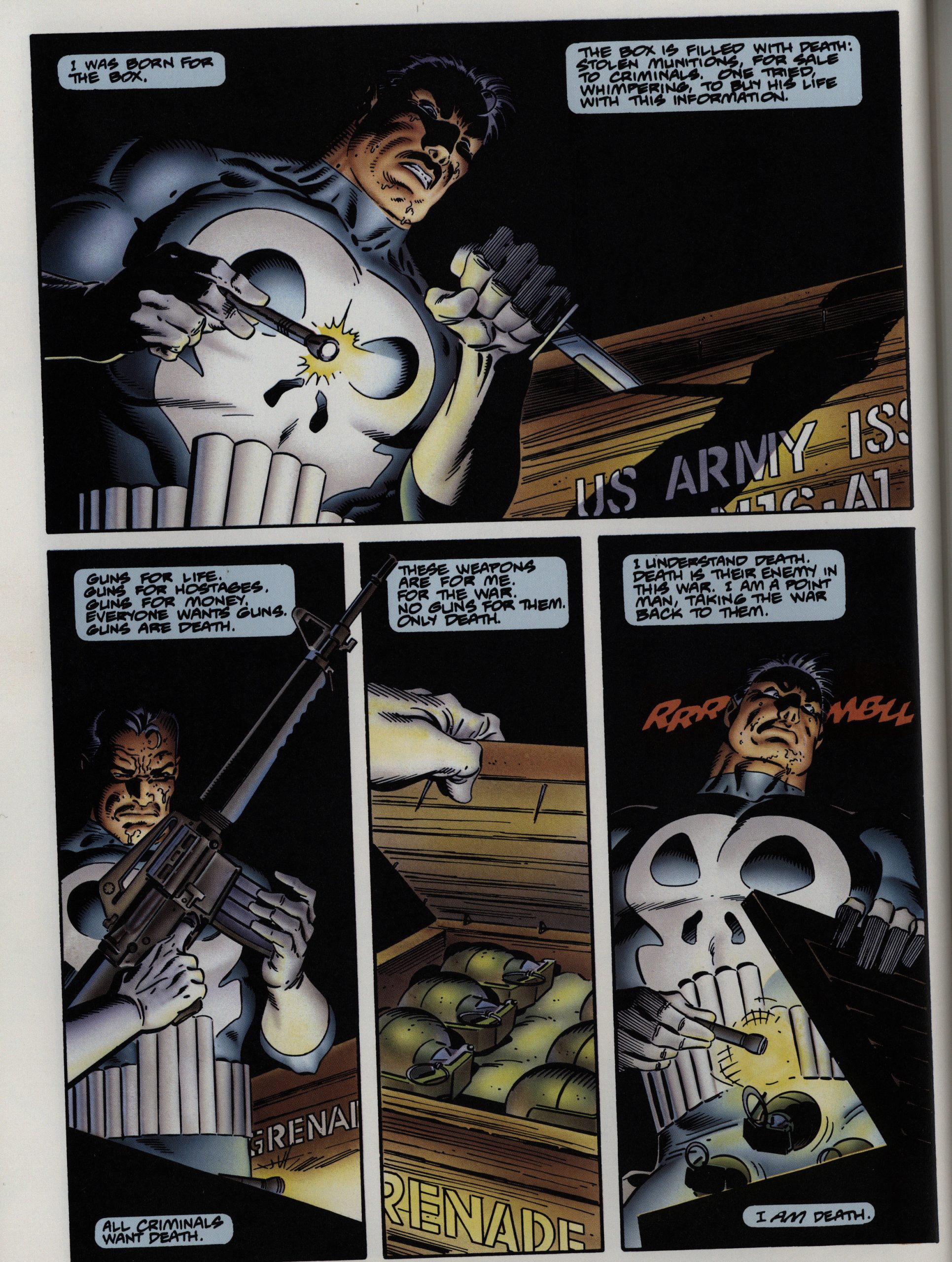 It looks just like a normal Marvel punisher book, only with better colouring (for its time). Reading this page (the second in the book) I thought I had the explanation: The Punisher wasn’t just a psychopath here (which was a normal trope in later Punisher books, I think?), but I thought that Grant was writing him as developmentally challenged, too, and this was going to be a scathing critique of the entire Punisher concept.

And, I mean, Castle’s drawn as microcephalic, too, so I thought I was really on to something here.

(What’s with the weird coughing between the speech balloons? That doesn’t really RAAAK! work.) 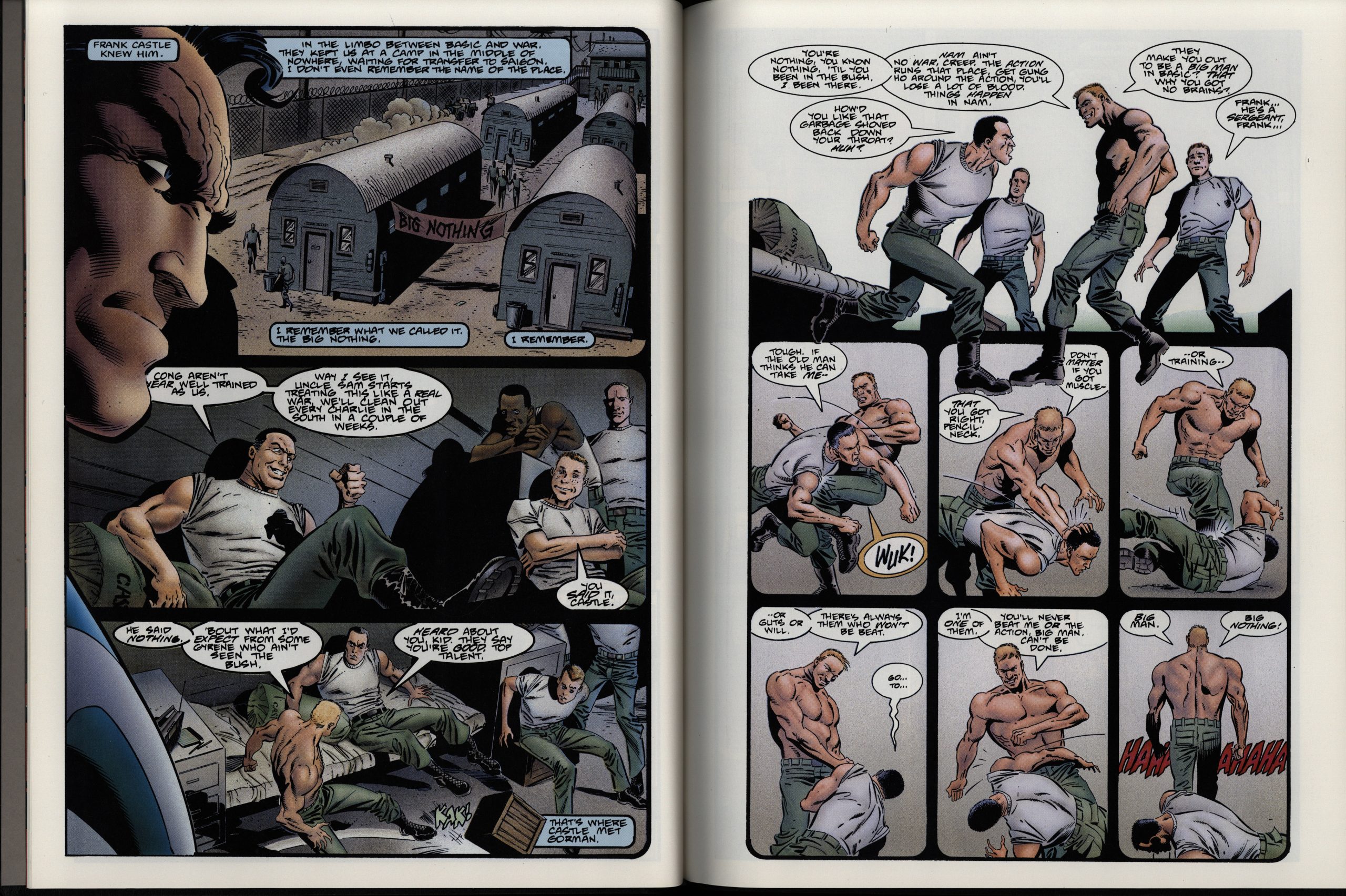 And it’s about him getting even with a sarge that humiliated him before friends back in the army?

But… no. It’s a bog-standard Punisher story about him killing some drug runners, and I guess he isn’t stupider here than he is in any of the books. (Of which I haven’t read that many.)

The artwork’s competent enough, but again, it’s just so standard. It does read well, and it feels like a modern (i.e., post-85) comic book, what with the voiceover and everything.

But there’s only so much of this a body can be expected to take.

Hm… I’m still not sure whether my initial take on what Grant was going for here was incorrect.

Marvel’s long-awaited hardcover Pun-
isher graphic novel has many of the
same virtues and flaws as the long-
awaited Batman movie. That’s super-
popular, so let’s hope for Marvel’s
sake that the public looks at this Pun-
isher novel in the same way; worth-
while for its intense emotional mood
and lots of cathartic violence, rather
than a story that makes much sense.

You ought to be able to fill a couple
of pages with plot-logic holes from the
Batman movie, and you can do the
same here.

But don’t uorry about that. The
Punisher’s fans don’t, you know. Ste-
ven Grant’s dialogue is simultaneously
punchy and brooding, realistic yet in-
tense, dripping with corrosive irony.
Practically every panel that isn’t an
action scene has the tautness of a fire-
fight that’s just about to break loose.
Mike Zeck’s artistic layouts capture
this tension excellently. Sweating mces
seen from dramatic visual angles. Ac-
tion scenes into single pan-
els of frozen frantic motion. Superb
shadowing and lighting, especially
around the eyes. Rich coloring with
careful, realistic highlighting. It looks
like the artists put $16.95 worth of
work into the highlighting alone.

He’s right about Punisher fans not worrying about plot holes:

The violence is detailed and the imagery graphic at times (one of the goons is seen riding a naked prostitute like a horse). At one point a guy gets his legs blown off by a bazooka. It’s uncompromising and for an older audience, but it captures the bloody violence that should be part of a series like this.

After bouncing around the Marvel universe for a good few years a 1986 miniseries by Steven Grant and Mike Zeck (which I must review sometime soon) swiftly led to a plethora of “shoot-‘em-all and let God sort it out” antics that quickly boiled over into tedious overkill, but along the way a few pure gems were cranked out, such as this intriguing and absorbing graphic novel which reunited the creative team, mysteriously released in 1989 under the generally creator-owned Epic imprint.

It looks like the book was recently coupled with a Jo Duffy-scripted graphic novel and re-released.