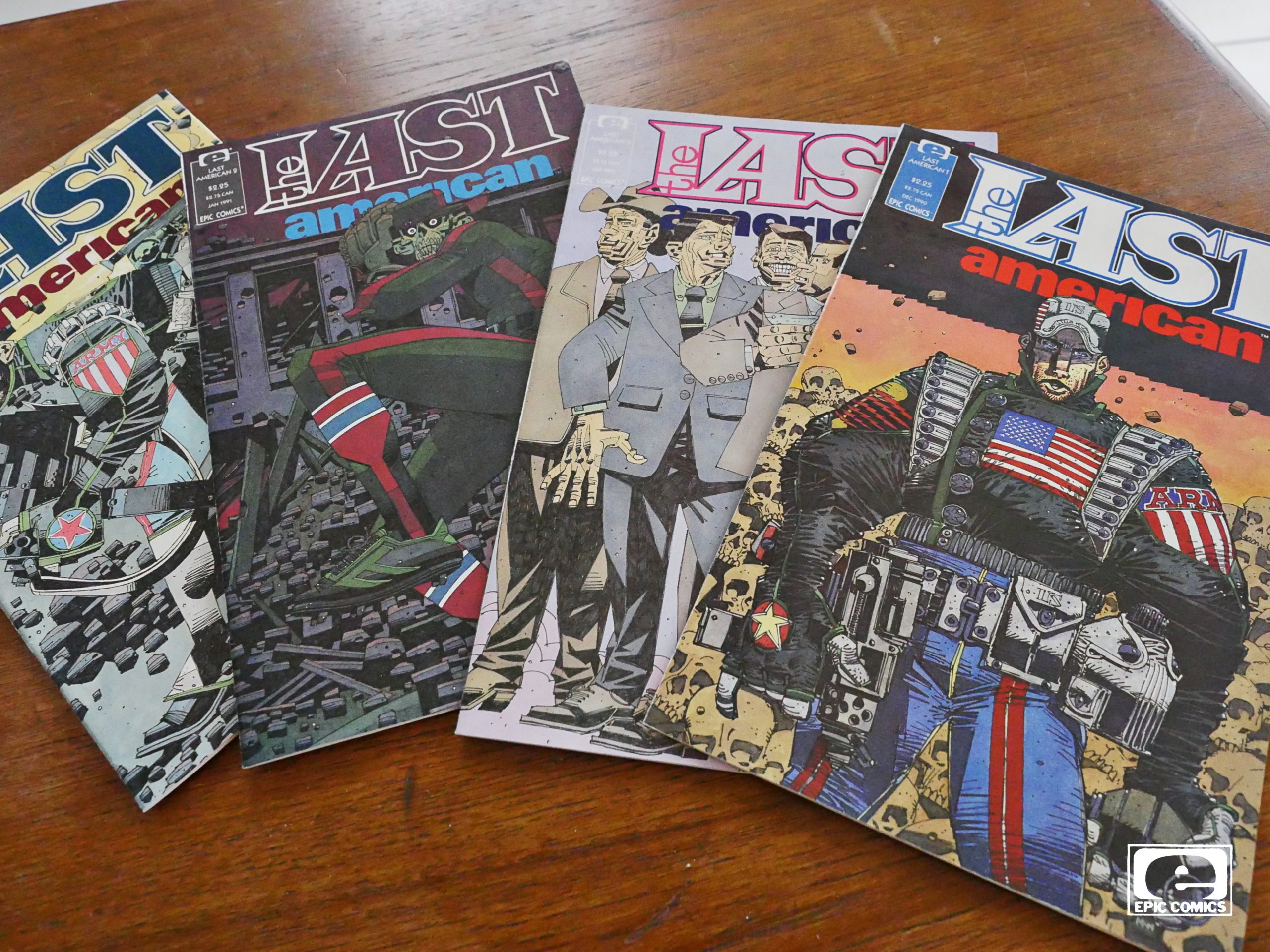 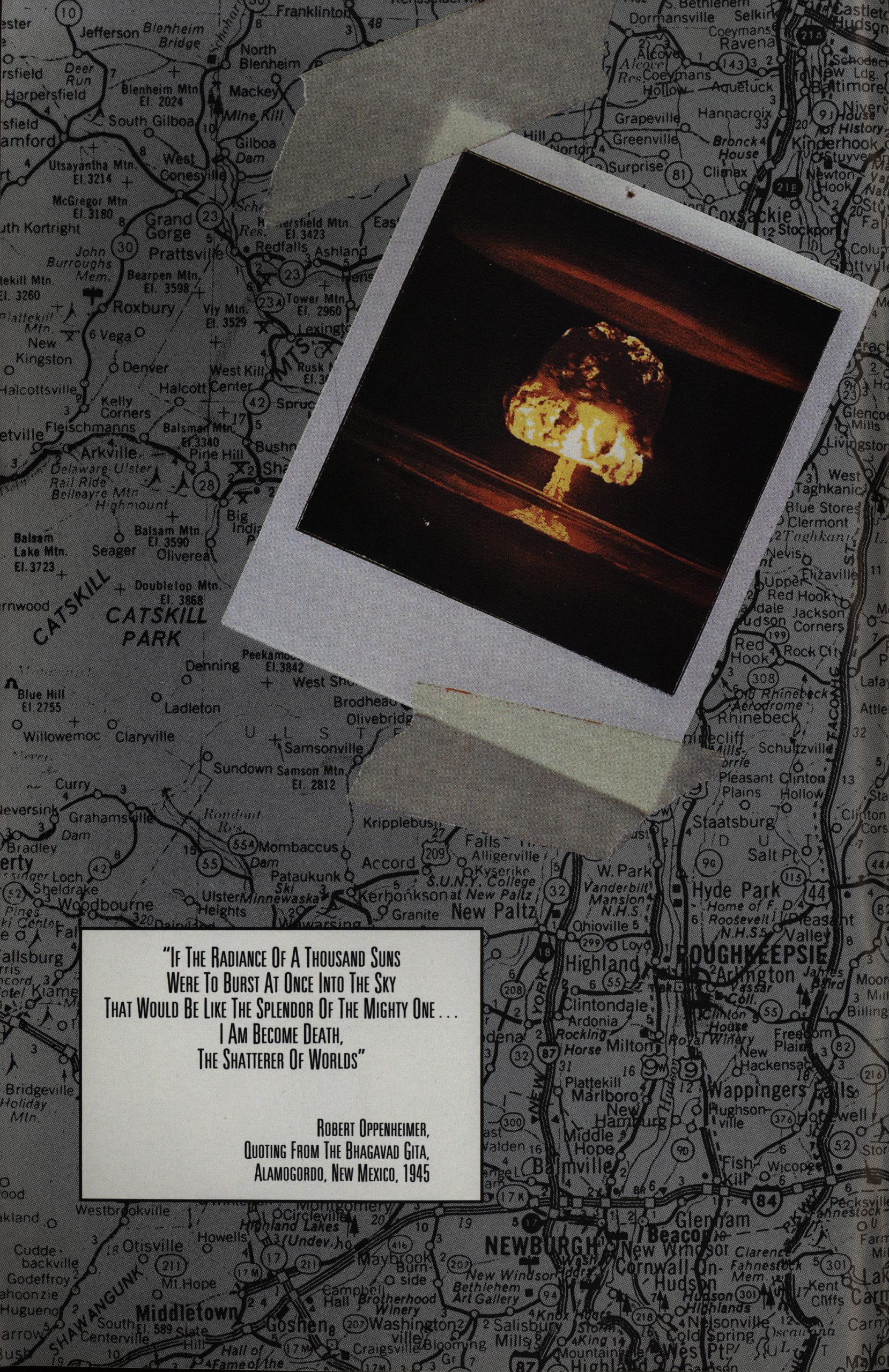 This starts off in a pretty portentous way, even for a post-apocalyptic late-80s comic book… 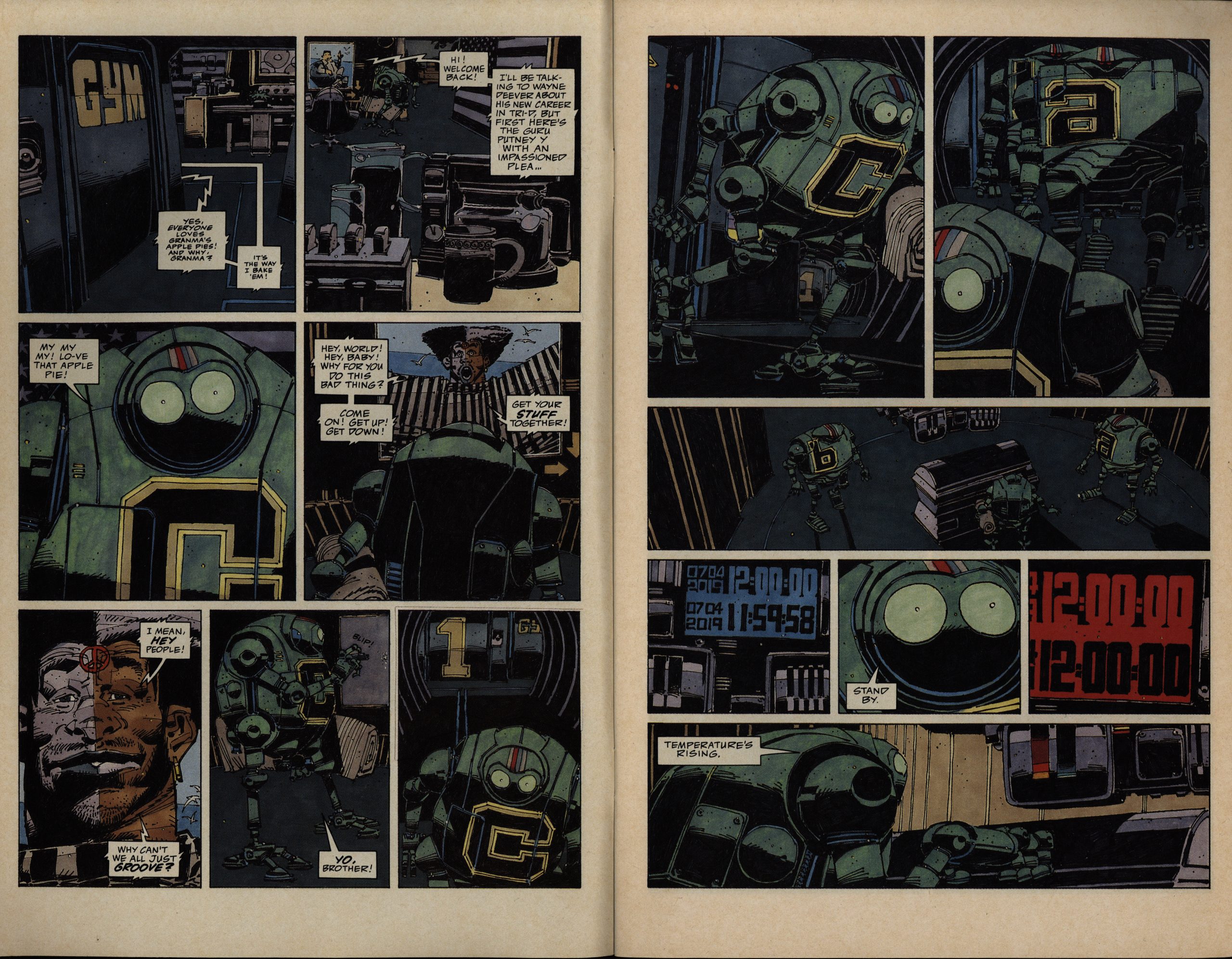 The book gets off to a pretty good start, with a comedy sidekick robot (I think those are required by law) and no recap of the situation: It’s pretty obvious what’s going on anyway (nuclear war, everybody dead except one guy in cryo sleep (that Last American, you know)). It nice to see a comic that doesn’t treat the readers like total morons. 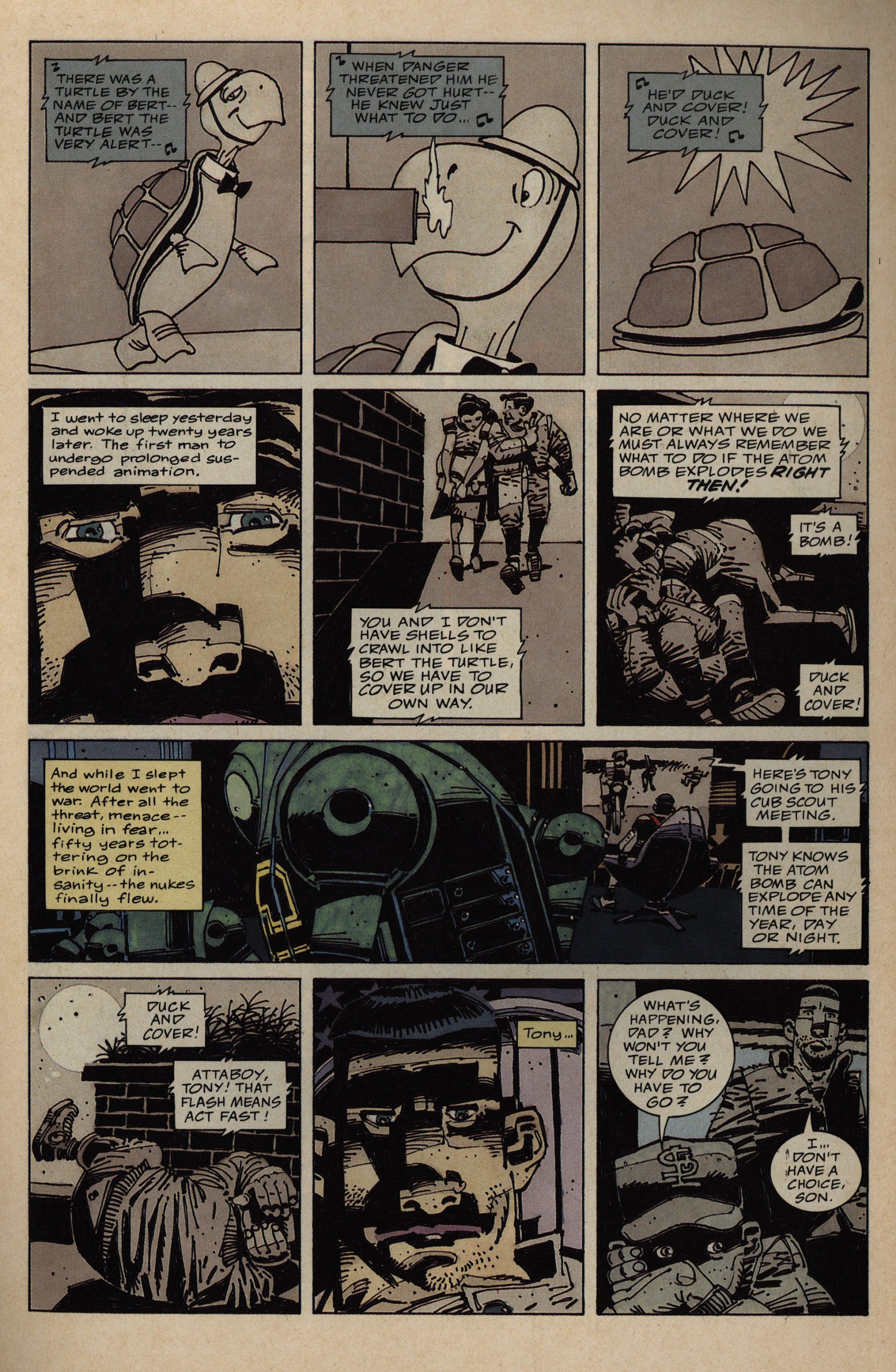 And then halfway through the first issue, we get some pages to bring us total morons up to speed. 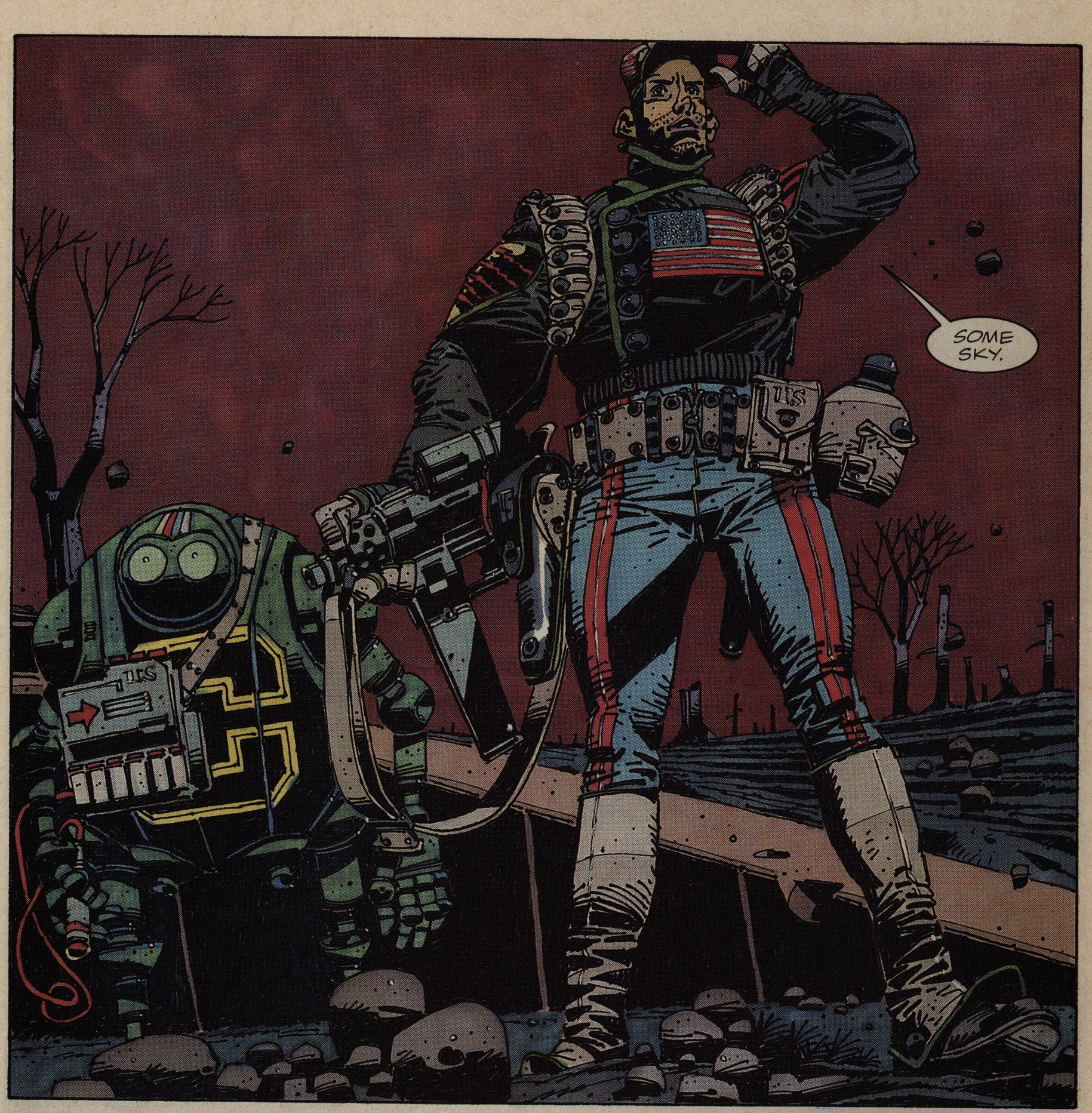 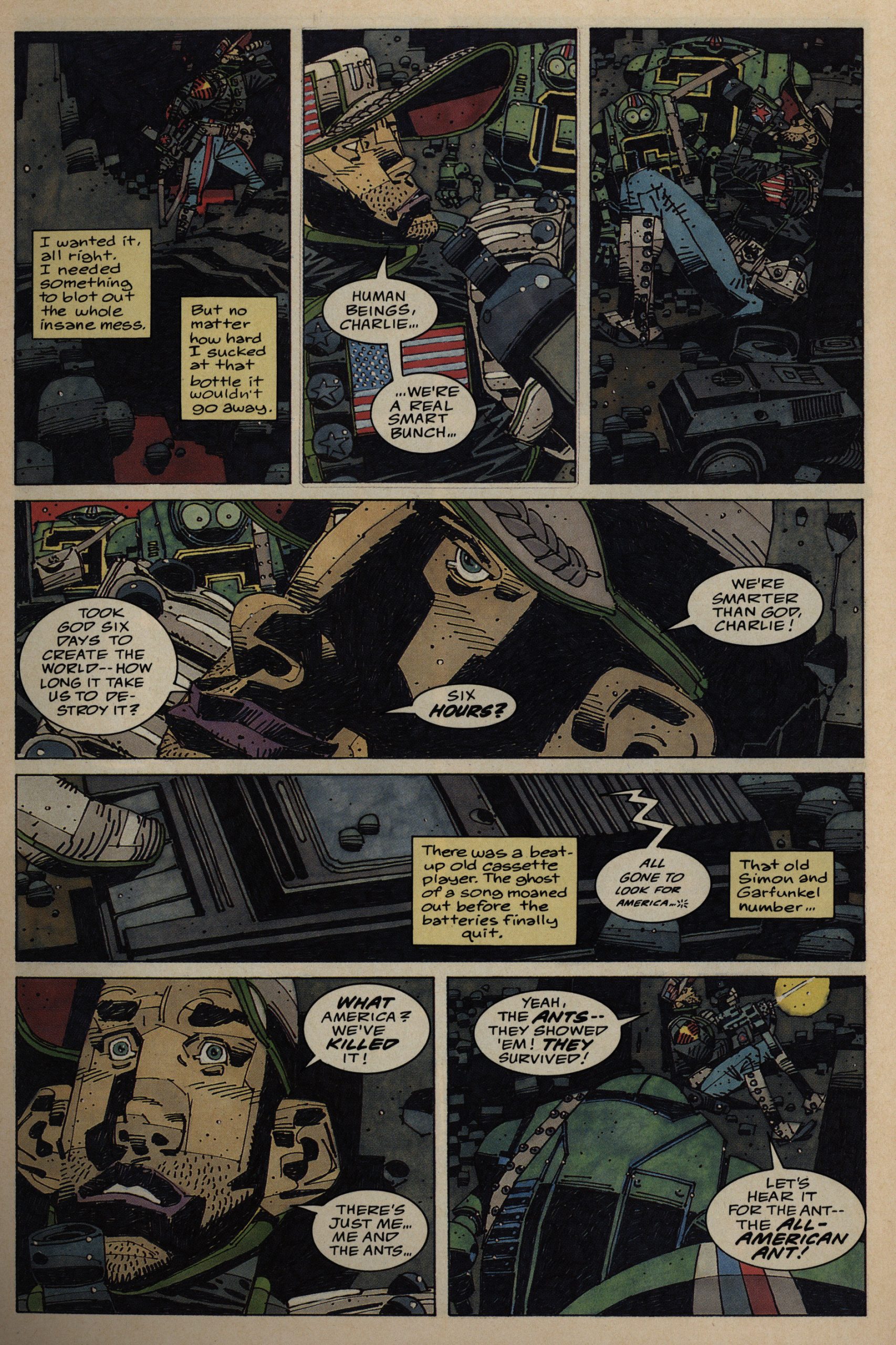 Even for post-apocalyptic late-80s comic books, the scenes are pretty hokey. Yeah, sure, finding a cassette player that plays half a line of “America” before sputtering out sure is convenient… Which makes me wonder: Am I just reading this wrong? Is this supposed to be a parody of post-apocalyptic late-80s comic books? Probably not? But perhaps we’re supposed to have a shared kind of “heh heh, this is pretty hokey” thing going on with the creators? 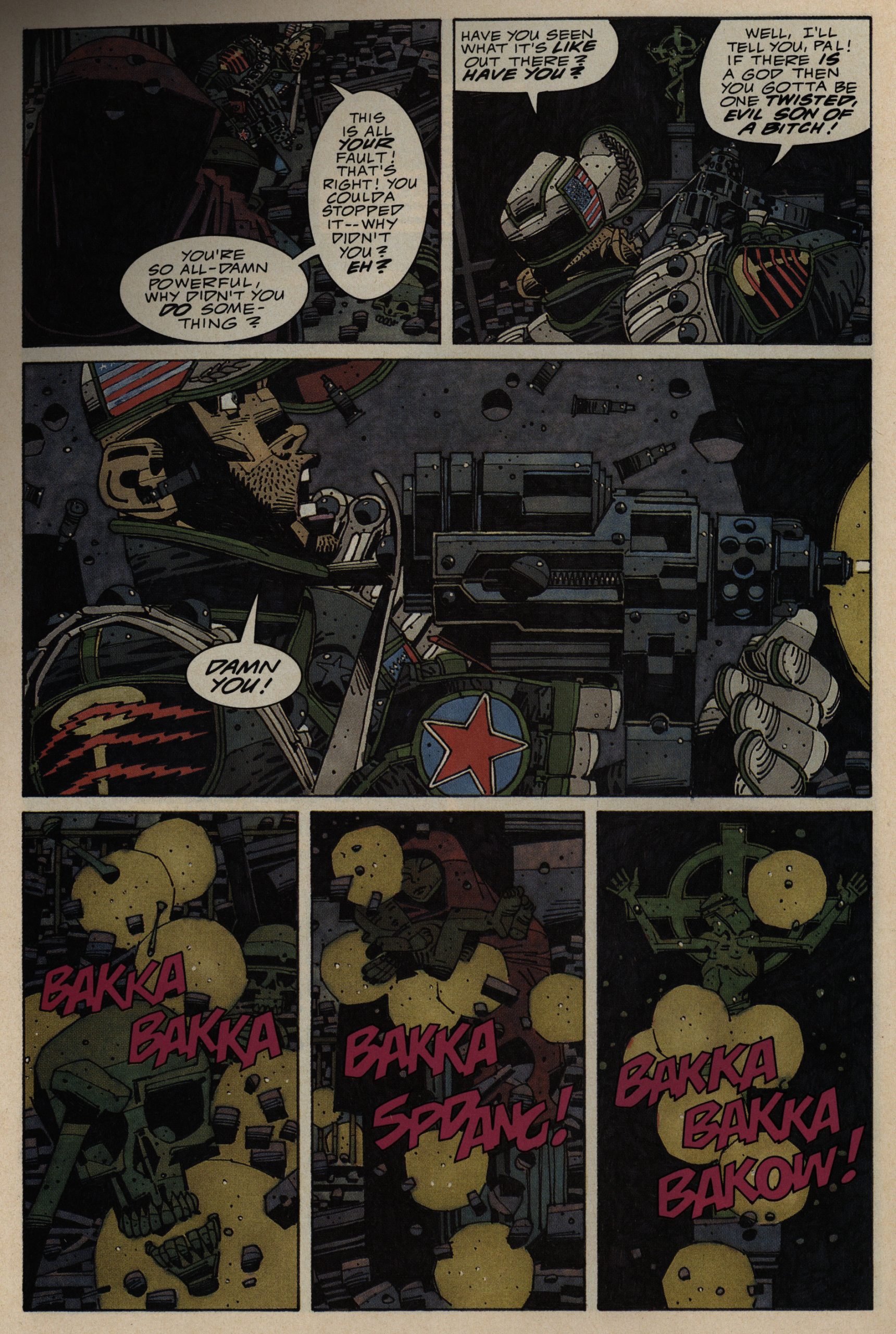 I don’t know… this book goes through all the standard set pieces with such obsessional devotion to the genre (see “GOD WHY HAVE YOU FORSAKEN ME” above) that it rather… makes you go… “hm”. 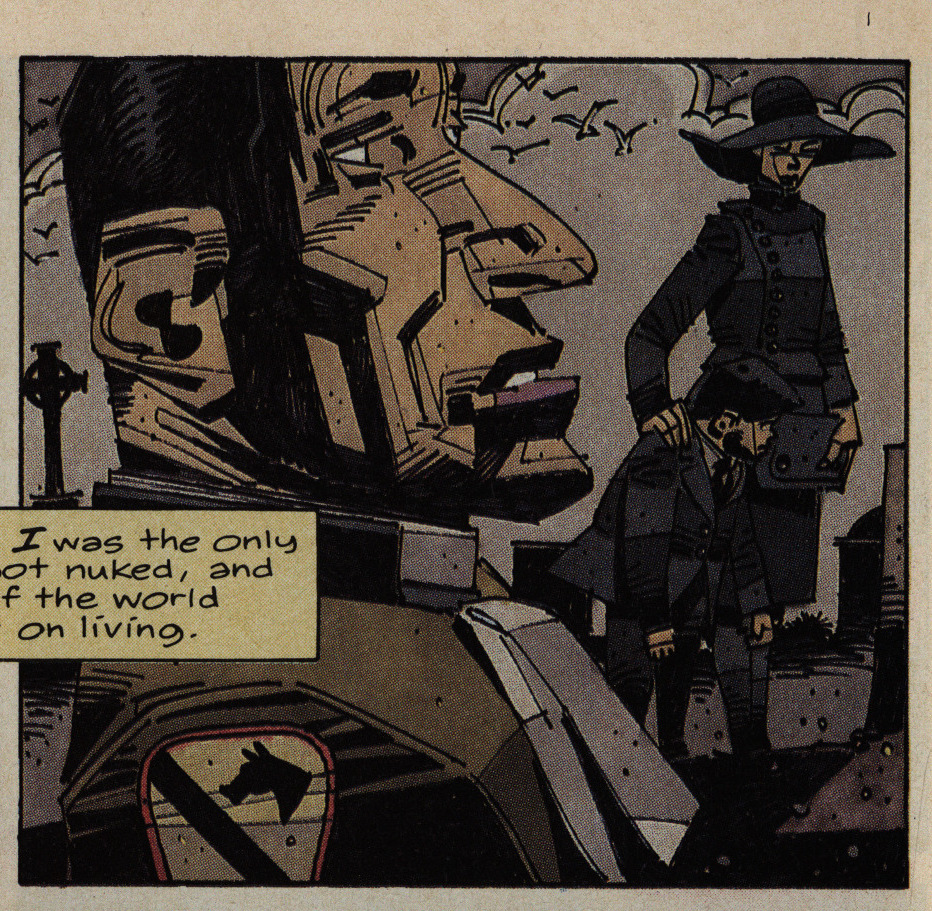 Anyway, McMahon’s artwork is a delight. It gets progressively more McMahonish as the series progresses. 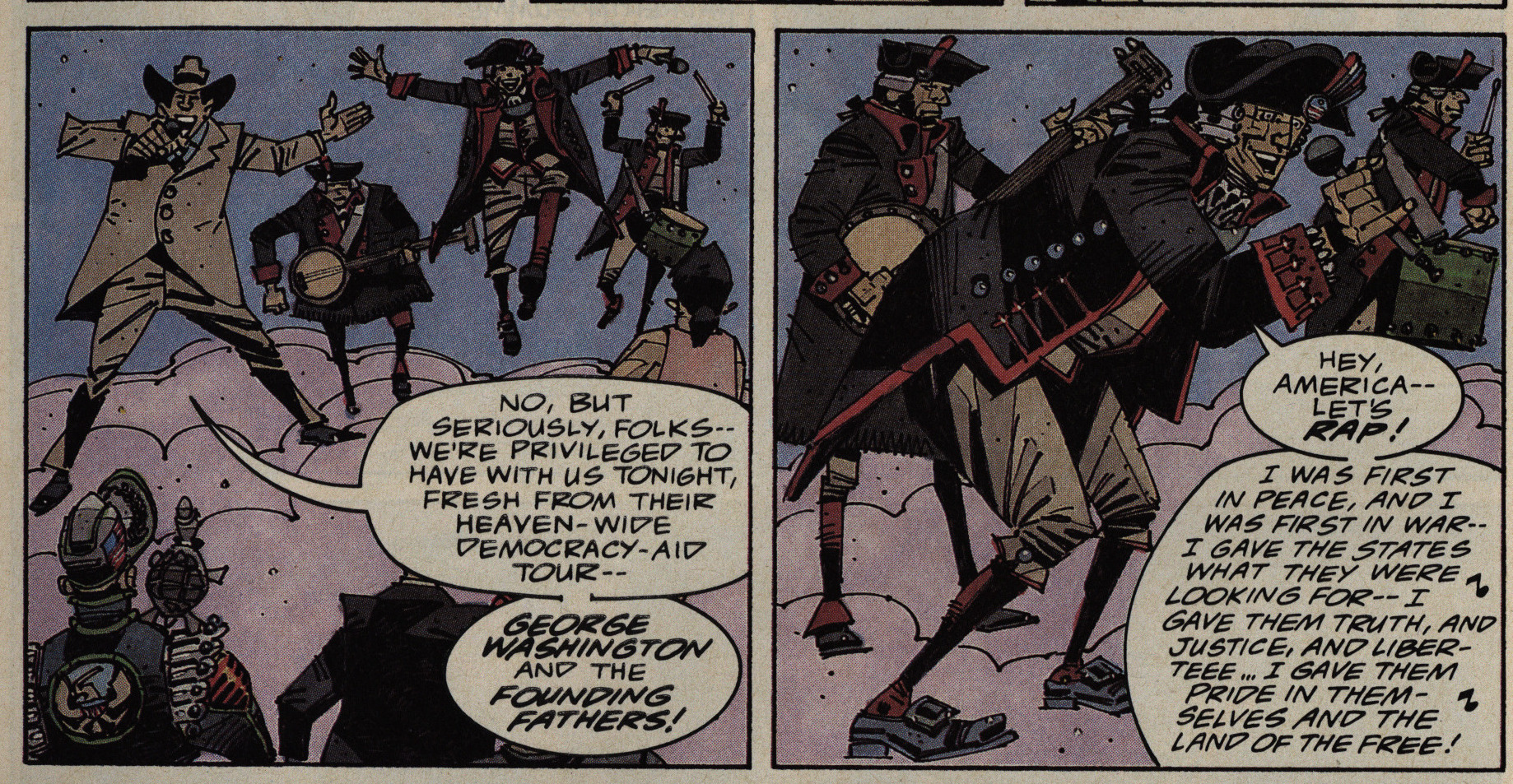 Not many people know that this is where Lin Manuel-Miranda got his idea for the Hamilton musical.

Anyway… OK, perhaps I may have come off a bit too dismissive of this book here. It is a brisk read, and as these things go, it’s pretty entertaining. It is perhaps the atmosphere of… worthiness… that’s off-putting for me. The plot is so standard that the Very Seriousness Of The Satire We’re Doing Here (or whatever they thought they were doing) is somewhat eyeball-roll-inducing.

Judging by issue #1 (“Goodnight,
Poughkeepsie”), The Inst American
is a top-notch series that deserves full
attention from the comics readership.
Grant and Wagner have produced,
perhaps, the best collaborative effort
of their joint writing career, and Mike
McMahon has produced superb art
that is, perhaps again, the very best
work of his career. His exaggerated
style is under super, refined control
in the premiere issue, and is perfectly
in Ikeeping with the nightmarish and
awfully sedate scenario as laid out by
the writers.

Further, there is an ever-present
aspect of humor provided by Charlie,
one of the last American’s robotic
assistants.

Absurdity is the dominant theme
running through The Inst American:
the absolute absurdity of mutually
assured destruction, the absurdity of
one man being left alive to survey the
madness of Man, the absurdity of the
indestructibility of banal catch-phrases
generated by an absurd media• ma-
chine, and, more than anything, the
absurdity of nationalistic machismo
which drives countries to destroy
themselves by being foolish enough to
wage war. The absurdity is sickening,
but The Last American is not.

Okay, I’ll come clean about it—The Last
American preview last time was a pile of
porkies. Well, I’ve got to keep myself enter-
tained, considering the title has appeared on
my list of allocated previews every six months
since 1985. Do you realize that if you’d taken
$1.75 per issue for this series and placed it
in a British deposit account when the series
was first announced in 1984 you’d almost
have doubled your money by now? There is
however, light on the horizon. Mike McMahon
has now completed three issues, and word
has it that The Last American may well
appear before the year’s out. I wouldn’t be
holding my breath if I were you, but in honor
of this brave piece of scheduling, and with
a nostalgic tear in the corner of my eye (and
certainly nothing to do with a crass attempt
to be paid twice for the same piece of writing)
I take you back to my very first Last Ameri-
can preview.
“The Last American is Ulysses Samuel
Straker, who is pronounced Holocaust
Commander by the president when the
bombs are about to fall on the U.S.A. He’s
also given carte blanche to act as he sees
fit in any circumstances in order to recreate
a post-holocaust U.S.A. and placed in sus-
pended animation to sleep through the
catastrophe, emerging at an unspecified time
in the future.”
There: masterfully restrained yet tantaliz-
ingly informative at the same time, wasn’t it?

Ah, OK, that makes sense: It’s been in production since the mid-80s, but was finally published in 1990. It would probably have made more of an impact being published in 1985.

Here’s from a previous Previews:

A moment’s respect there. Cast your minds
Champions, there were two number one
singles for Prince, and Ghostbusters was re-
leased. And then there was the second A.MAZ„
ING HFROFS PREVIEW SPECIAL, in which
The last American was first mentioned to an
a success the PREVIEW SPECIAL would be,
and who could have predicted that with the
decade drawing to a close, we’d still waiting
for The last American? Let me brush that
tear of nostalgia from my eye.
Well, the honest to gcxxlness progress bulle-
tin is that in between reading baseball ency-
and rescuing dogs from canals,
Mike McMahon has finished drawing the first
issue. Now don’t you get too carried away,
though. because with Arsenal possibly due to
win their first League Championship in 19
years and Liverpool chasing them every inch
of the way it’s likely to be a stressful time for
Mick, the Highbuty Hooligan. And the worst
of it is that it could all boil dmvn to the final
game of the season when Arsenal travels to
Anfield to play Liverpool. Whatever happens
there, your best bet is to content yourself with
a few issues of Neat Stuffand look back here
next year.

THE LAST
AMERICAN
W:itteo by WAGNER: illustrated by M*KE
McMAHON; ed.ted by ARCHIE GOODWIN
32 four-color pages; $1.75; eventuany from MARVEL
EPC COMCS
Well, you’ve been waiting for this for the
past four years now, haven’t you? These
things can’t be rushed, can they? After
all, you only want the best, don’t you.
Which is why you’re not likely to be
seeing The Last American for a while
yet.

Somebody writes in Amazing Heroes #62, page 68

According to Archie Goodwin, The
Last American, a new Epic Comic
scheduled to premiere in 1985.
represents a logical extension of
the creative team’s previous work
on Judge Dredd. We were unable to
work a transatlantic phone call into
and schedule, but, if a
picture is worth a thousand worqs,
here•s 2,000. 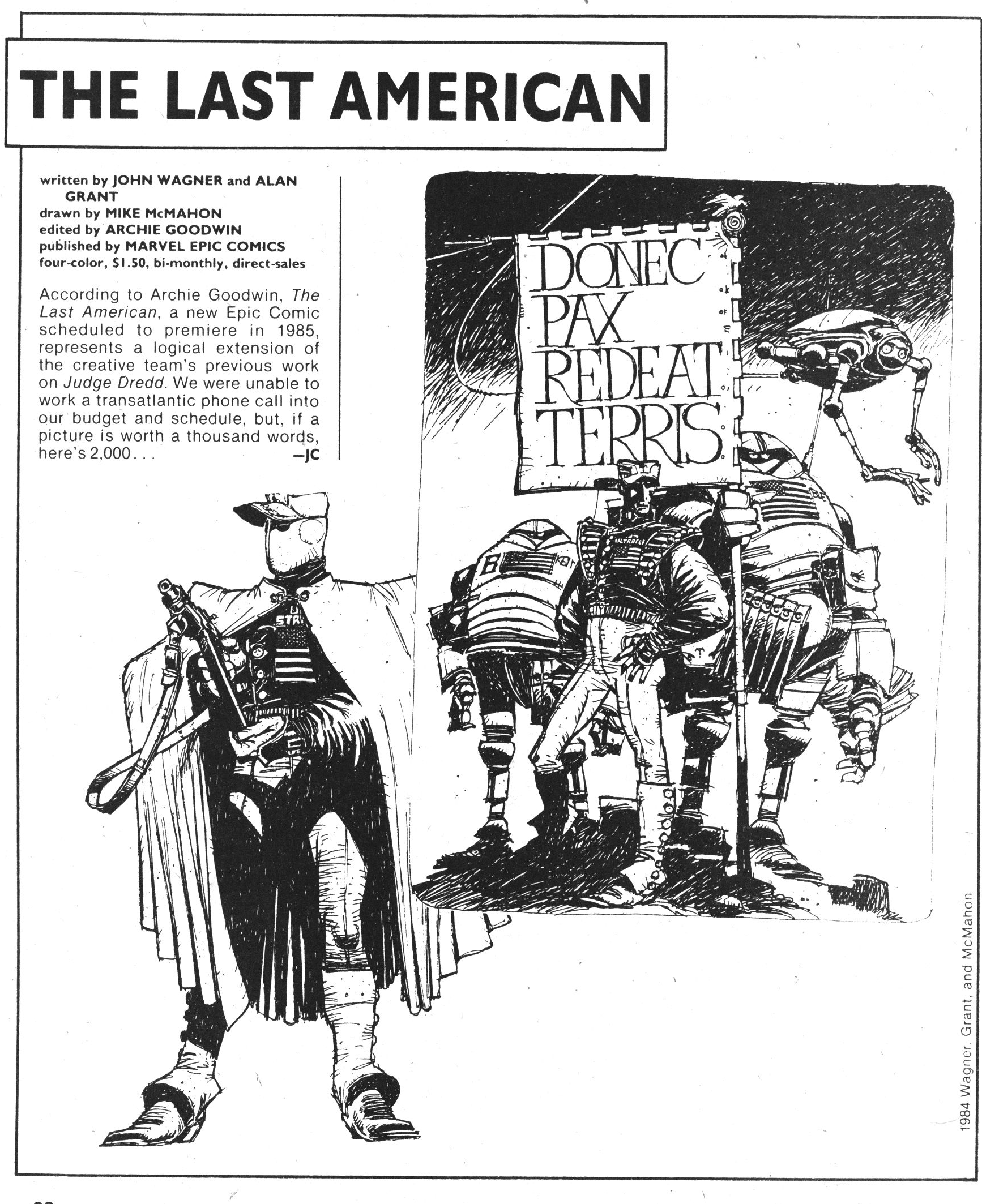 The Last American: Epic says
it will come out—eventually.
The Last American (Marvel/Epic):
SOMEDAY Still in the can; the Marvel
promotion department didn’t even re-
cognize the name. In typical Epic
fashion, it will probably appear when
you least expect it.

THE LAST
AMERICAN
Witten by WAGNER ard ALAN GRANT;
illustrated by MIKE McMAHON; edited by DAN
CHICHESTER
32 full-color pages; $1.75; bi-rnonthöt from MARVEL
EPC COMCS
The delay in releasing this title has given
writers John Wagner and Alan Grant the
opportunity to refine The Last American,
resulting in some radical changes from
previously announced plans.
The lead character will still be one Ulysses
S. Grant, but instead of a man from the 1990s
charged with restoring civilization after the
holocaust, he’ll have been placed in sus-
pended animation at the tail end of the ’70s.
This change in direction results from the fact
that when the original plot was conceived the
idea of warfare in the future was relatively
fresh, whereas in the past few years it’s been
a well-mined field.
Grant was placed in suspended animation
to survive a nuclear attack on the U.S.A., and
charged with restoring civilization to its
former glory when he revives. The attack,
however, was averted at the final countdown
and he awakes after three decades to a
prosperous globally united utopia in no need
of salvation. His mission, however, is to
restore what he recalls as civilization. As the
technology of the furture prevents this
mission being achieved through the force
thought necessary when he was buried, the
Last American must attempt to reintroduce
the cultural iconography of the ’70s to a world
that doesn’t need it. Clad in Starsky-style
cardigans, or white-flared suits with stack-
heeled shoes, he is a lonely figure roaming
this new America in his Ford Pinto rather in
the manner of an eccentric preacher, extoll-
ing the virtues of pet rocks, lava lampst and
“good old-fashioned American disco”.

Tee hee. (That’s the version of the preview that was referred to in the first preview I quoted up there.)

PLOWRIGHT: Something that has been announced in
the USA is The Last American for Epic.
GRANT: They have the first part of it, but the whole
project came to a halt with Mike McMahon’s illness.
Mike’s back at work now, but he’s going to have to build
up gradually before doing it because it’s a major work,
but it should still be go.
WAGNER: If it does go we’ll have to change the story
completely. A story that’s been lying about that long loses
all attraction so we have to put something new into it to
bring it to life for us again.
GRANT: We thought the ‘ ‘Last” angle was a really nice
concept. We could do a French one, “The Last Fren-
chman” or “The Last could have exactly the
same comic with a different flag for every country in the
world.

The Last American has been reprinted at least twice (as a paperback).

Mick McMahon had been great before 1990 and great since, but his art in The Last American is so striking and idiosyncratic that it animates this particular story with a profound disquiet. The angular figures and splayed joints and underground-comix caricature anticipate the territory Frank Miller arrived at a decade later, and the faces look like they’ve been sanded out of pine and varnished.

It’s bleak as all hell – a fitting tribute for the end of the Cold War, but McMahon’s artwork is worth the entry price alone.