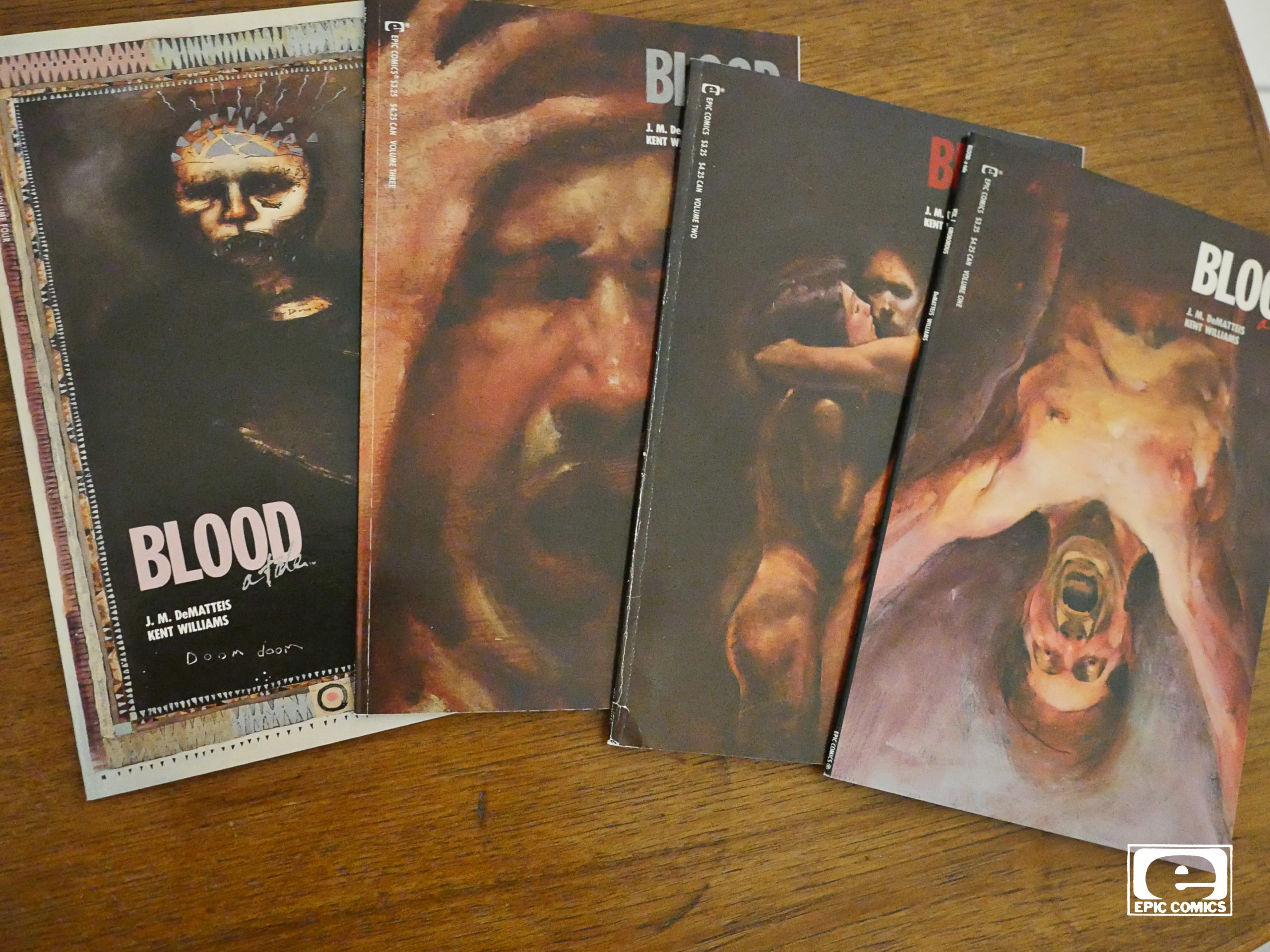 Back in the 80s, I quite liked Moonshadow, DeMatteis’ other Epic series. This one, on the other hand, I found rather jejune. Well, OK, the bits of it that I read: I never had the third issue until now, so this is the first time I’m reading it all. Perhaps it’ll work better as a complete unit? 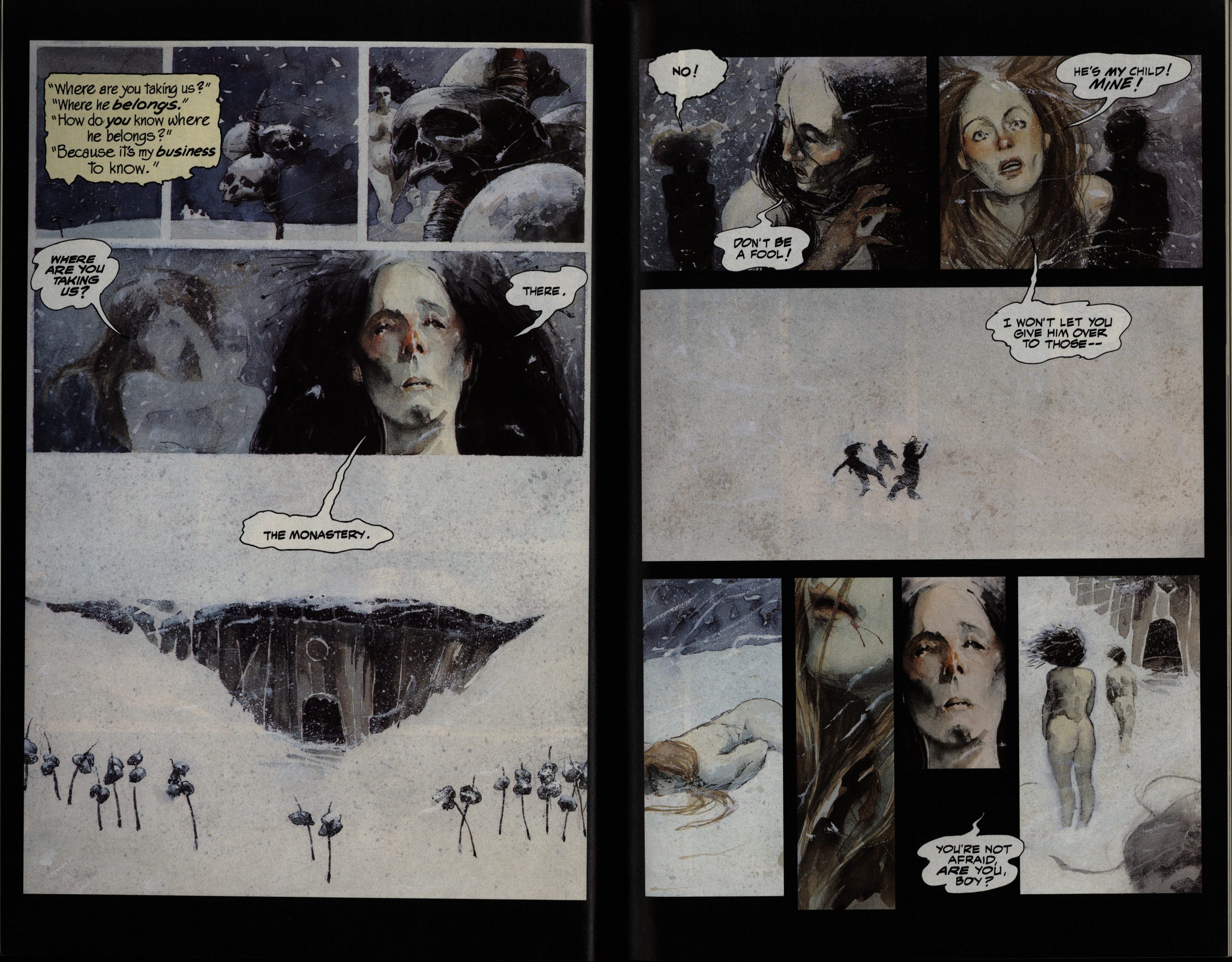 Kent Williams did parts of the artwork on the last few issues of Moonshadow, and he did a good job there. And, indeed, this looks very nice indeed. The only problem I have here is his use of photo reference for most of the faces… insufficient photo reference, since he only seems to have a handful of snaps per character, leading him to repeat expressions exactly. Repetition can be a powerful too, but I don’t really think it’s what he’s going for: Instead the occasional repetitions just *zoing* pop out for my eye when opening spreads like this, taking all my attention. 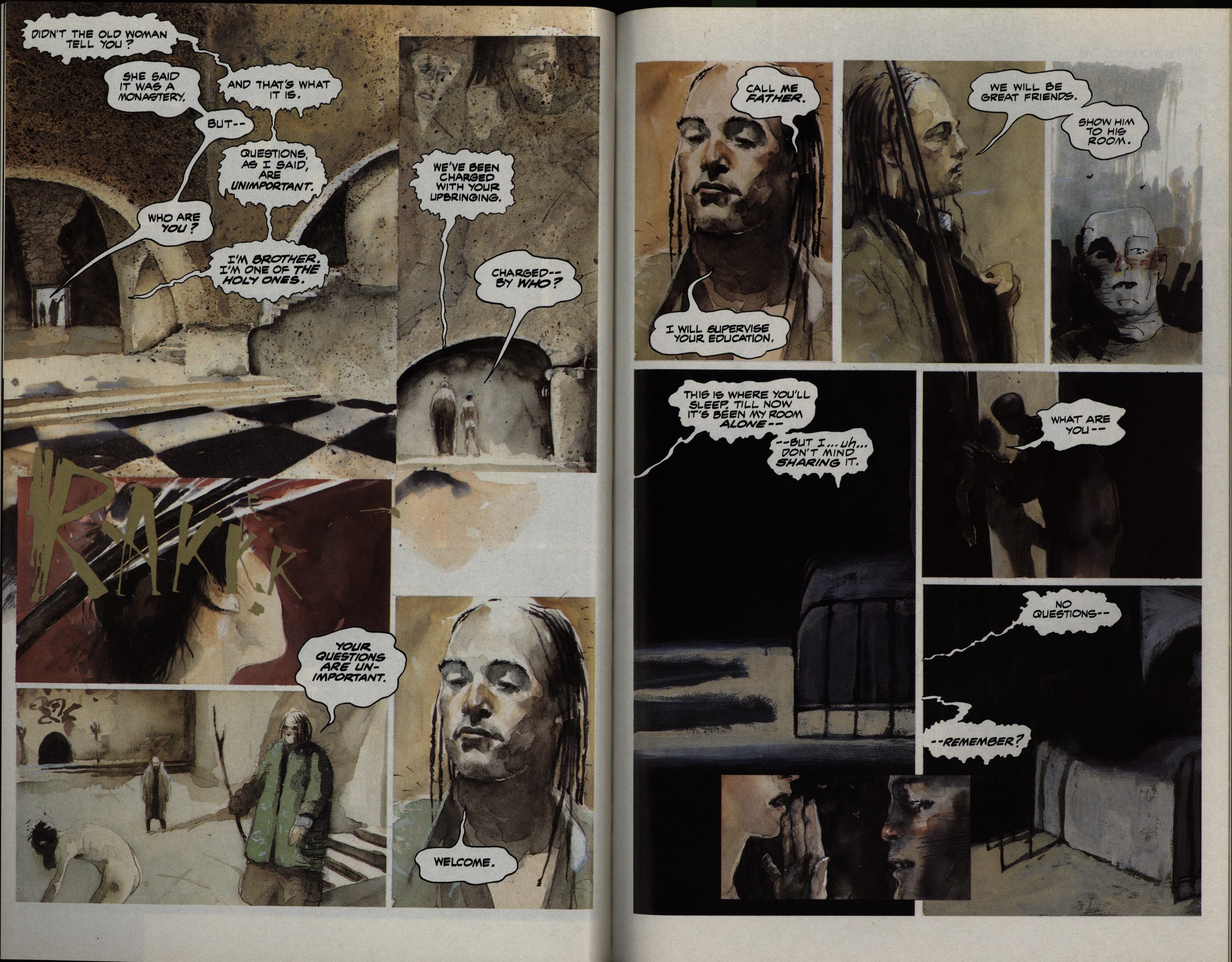 They’re usually not repeated on the same page, so perhaps Williams just didn’t have the previous page on display when doing the next page, and didn’t the repetitions on purpose? I know, that’s a moronic theory, but it’s all I’ve got. 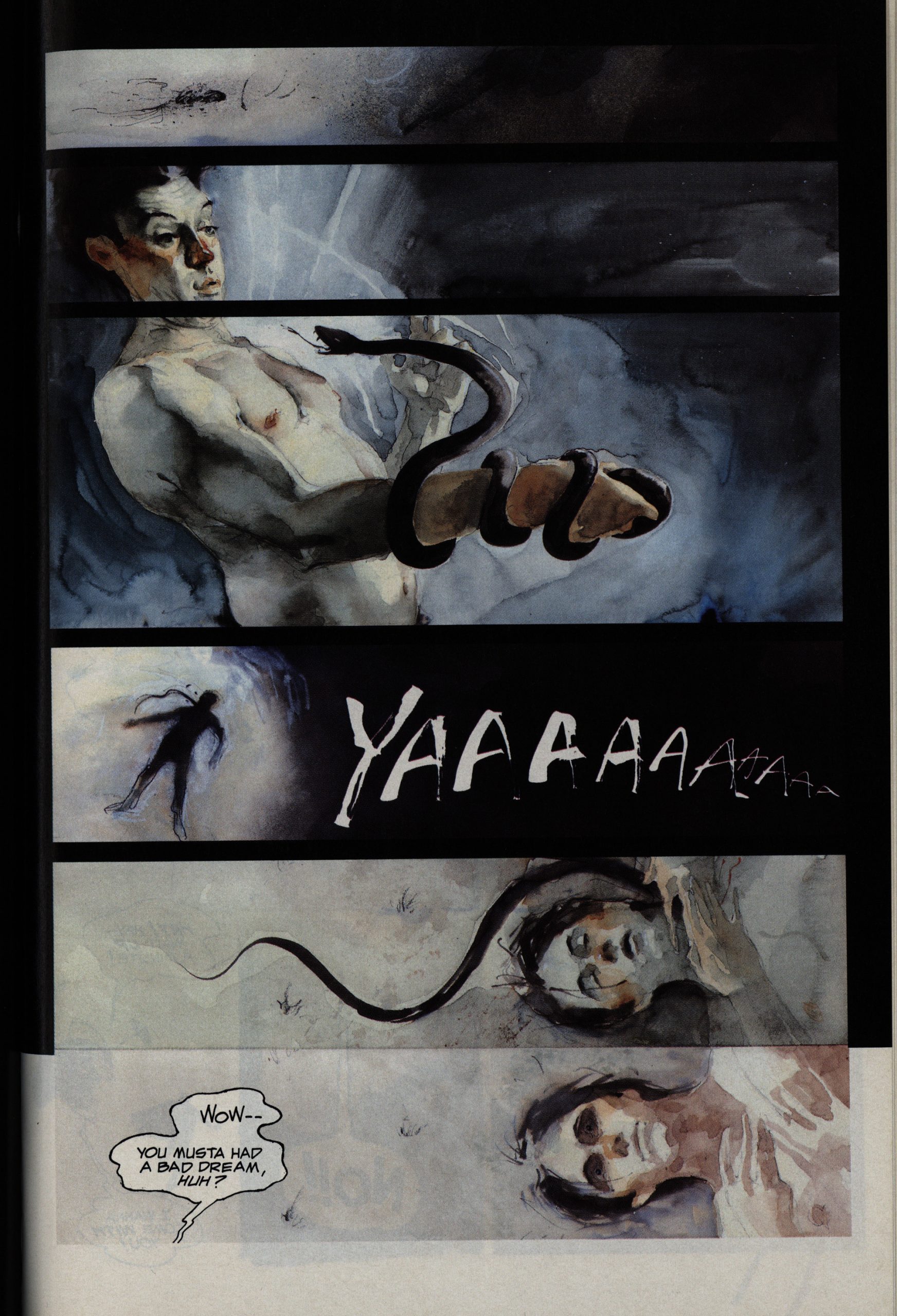 The other problem with relying on photos this much is that the expressions aren’t particularly convincing if the models aren’t convincing, and the lumpen-faced guy he’s got playing the title character, Blood, isn’t very inspiring. 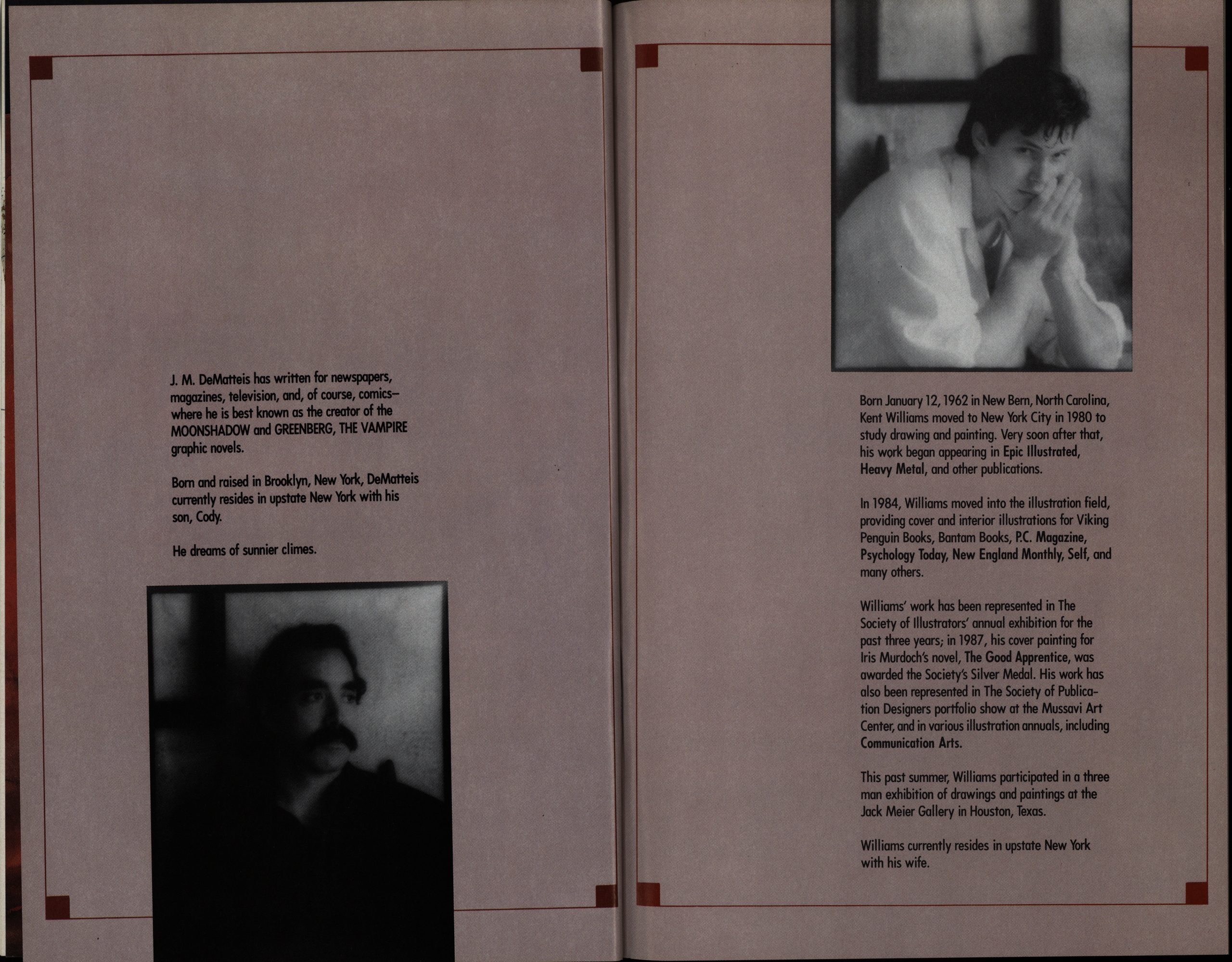 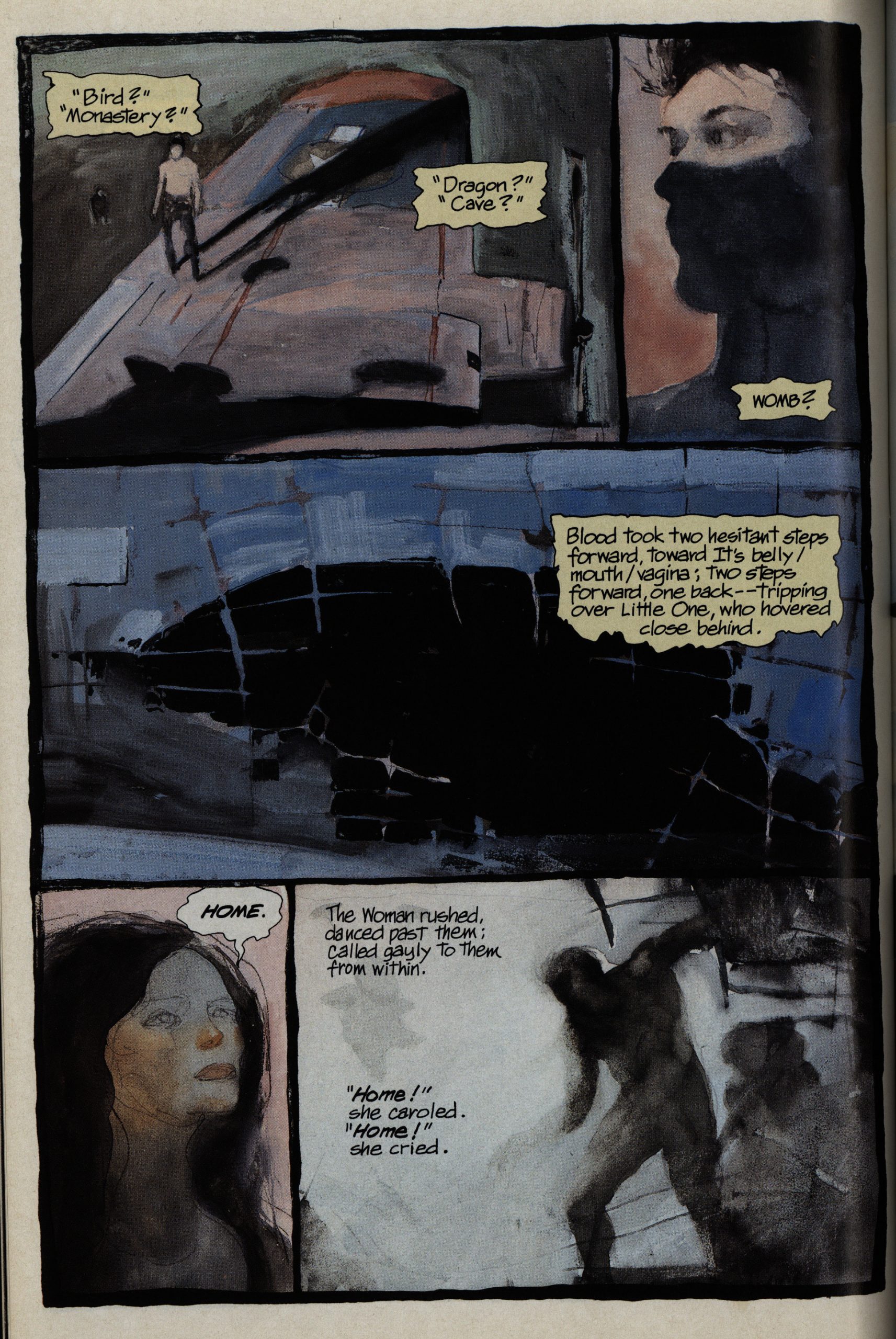 Oh, yeah, the writing… It’s not my cuppa. You can totally see these lines being the script for a sophomore theatre production, can’t you? ‘”Home!” she caroled. “Home!” she cried.’ It’s all in this register, being all meaningful and spiritual and stuff, which totally gets on my tits.

I’m more of an Eileen Myles kind of guy. 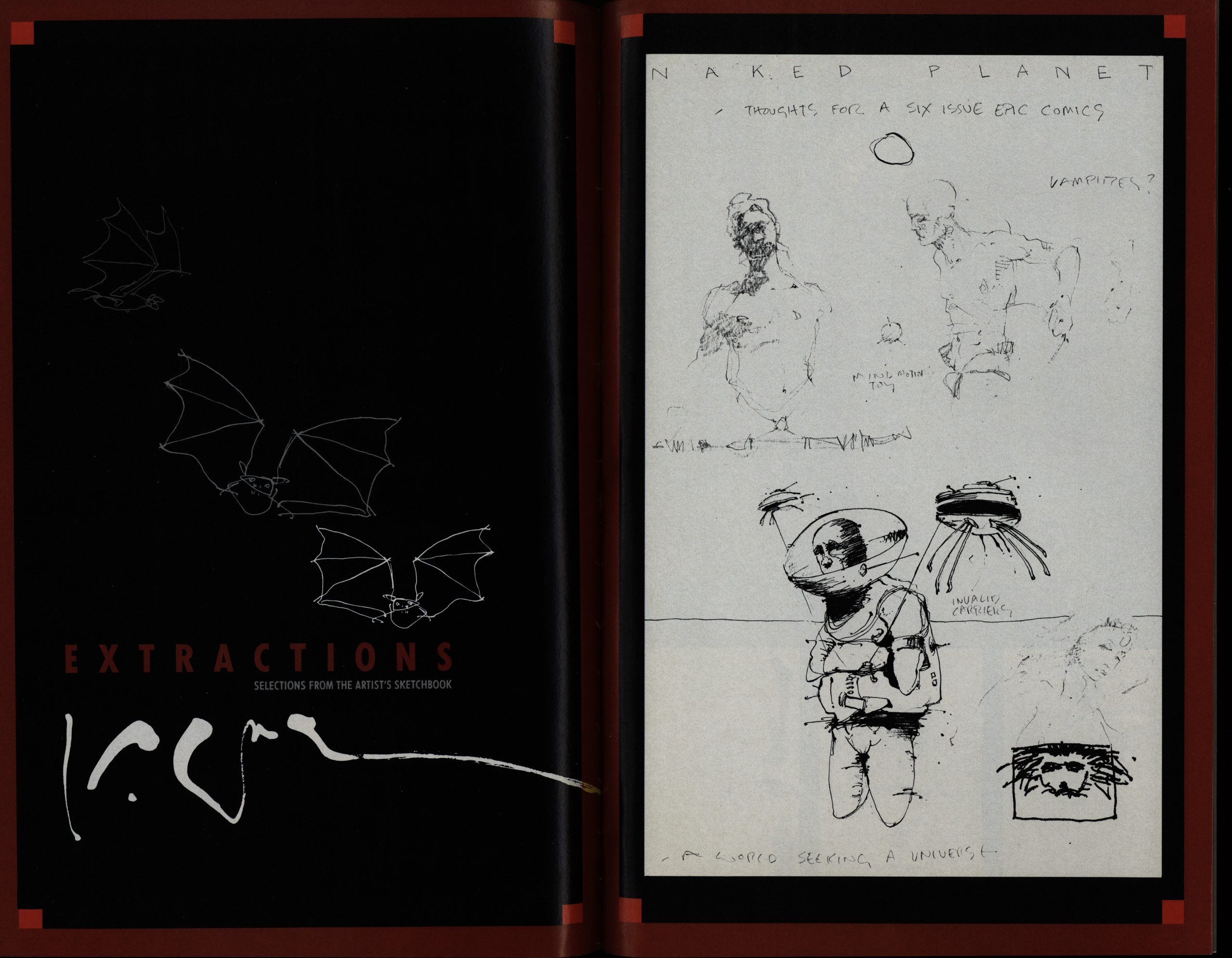 Oh, this was originally meant to be a six-part series? Presumably 32-page issues, because it was printed in four 48-page “prestige” format issues (I think this is the first time Epic used that format, made popular by Dark Knight Returns?). And that’s the same number of pages, if I read my slide rule correctly. 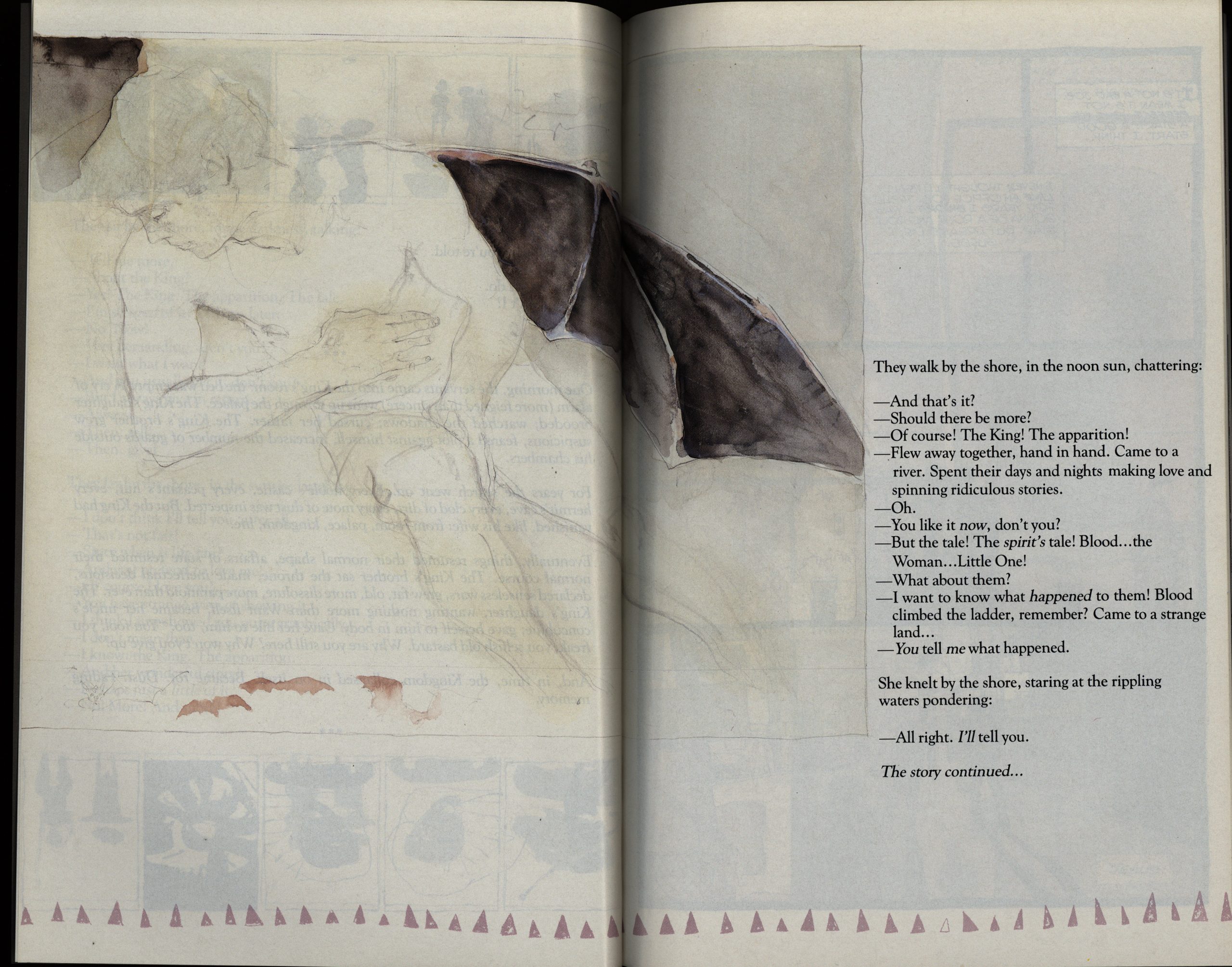 As usual in Epic comics, there’s a recap in every issue, but this time around, it fortunately (or perhaps not) keeps to the tone of the rest of the story.

Oh, the story? It’s about life and death and stuff. When they got to the bit where they have a birth and a death on the same fucking page, I died just a little myself. In pure reflected embarrassment that anybody could possibly be this heavy handed.

I don’t mean to rag too much on the writing here. Yes, it’s bad, but the series does actually read quite well: It’s not that much of a chore to get through, and meanwhile there’s all these pretty pictures to look at. It does work in a way. 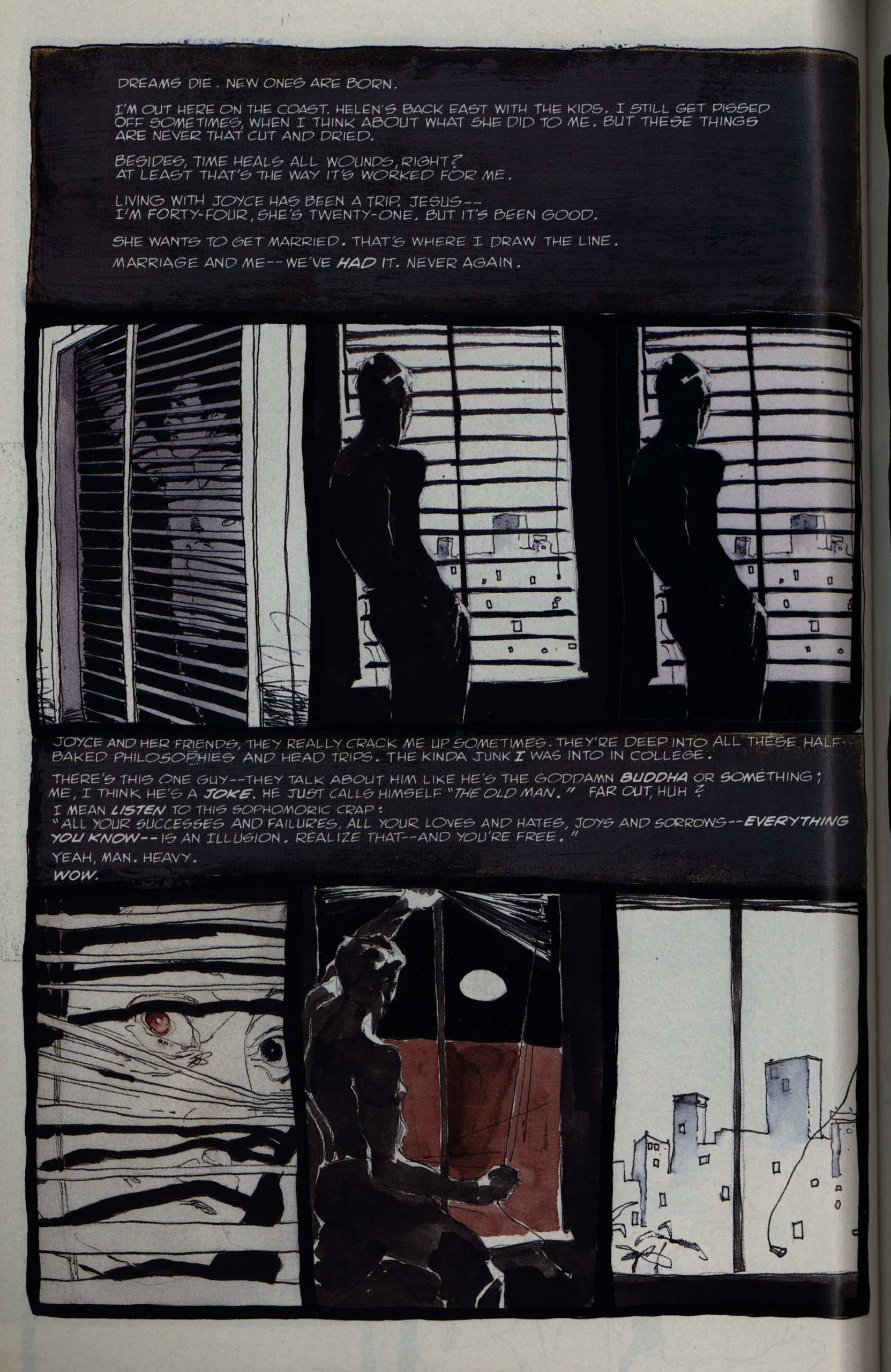 In Moonshadow, DeMatteis tried to ward of criticisms by preemptively by doing some self-criticism (but not really), and he does the same thing here, by having Blood calling (what will turn out to be the final moral of the story) for “sophomoric”. It didn’t help! Haha! I called the book that, anyway! 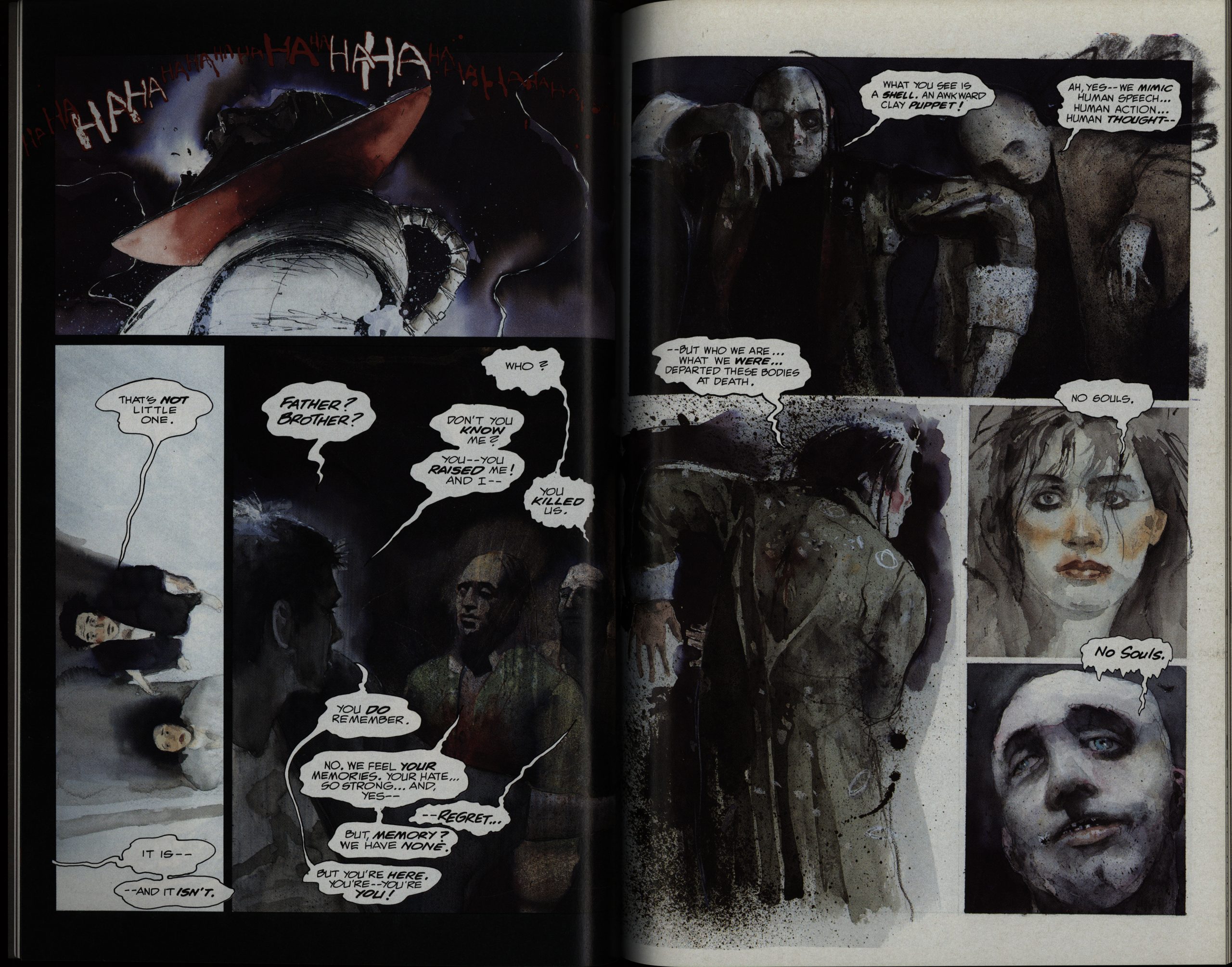 Anyway! The book does have some structure, and everything ties up neatly… some parts feel very improvised, but it works.

AH: Give me some insight into the
storyline of Blood: A Tale.
DeMMTEIS: That’s a tough one
. the biggest problem I have with
Blood is trying to describe it. Karen
Berger says it’s like an Ingmar
Bergman movie, which, depending
upon your reaction to Ingmar
Bergman, could mean it’s really good
or really awful [laughter]. But I think
she meant it as a compliment. On one
level, Blood can be taken as an adven-
ture story. It’s a quest. We follow
Blood from birth. He’s taken to a
monastery and raised there. Then, at
a certain age, he discoveres that
everything he’s been taught, every-
thing he’s built his life upon, is a lie!
Then he decides to venture out into
the world and find out what the hell
the truth is. The nice thing about
Blood is that it takes place in a world
where virtually anything can. exist
around the next corner. It’s not a
science-fiction world of the future or
a Tolkien world of the past, it’s just
a map inside my own mind. Blood is
a dream tale.

Blood actually
has a conclusive ending, but the neat
thing about the story is that it’s a tale
within a tale that turns into a tale
within a tale within a tale. Each issue
of Blood is actually a journey and
discovery for me as a writer. Al-
though I’ve made an outline for the
series and can tell you about some of
the themes and intentions of the story,
there are so many things that happen
in this book that surprise even me!
Sometimes I don’t know what’s going
on until it happens! So on onelevel
I would call Blood a very linear story,
a quest, but on another level, it’s an
allegory—the story of a spiritual
search. Since spiritual matters are
intangible and ineffable, the allegory
is a great way to explore those things.

CRITIQUE
Before reading J.M. DeMatteis’s new
series, Blood: A Tale, I flipped
through the first issue and found the
writer’s dedication. which is, in part.
“For… Meher Baba (whose Love
drowned me.)” I got a sinking feel-
ing when I read that; suddenly, I knew
what I was in for. This may not have
been the most admirable of decades,
but at least I got through it without
anyone asking me to live on an
ashram. But the ’80s, I keep hearing
it said, are over. the New Age is here,
and people everywhere are channel-
ling, fondling crystals, and looking to
their navels for enlightenment.
And reading boutique-spiritualist
stuff like Blood, I guess. Not that my
expectations for this series were high
to begin with. I’d given up on
DeMatteis’s previous Epic Comics
series. Moonshadow, after three
issues—it was so unrelentingly
precious.

Blood tries for—and
achieves—the same look as Moon•
shadow, with its watercolor pictures
(this time by Kent Williams) and
fancy-schmancy upper-and-lower case
lettering. This, the creators seem to
be telling us, is nothing so vulgar as
a comic book, heavens no. Those of
us who like comic books should just
sit still and let ourselves be bettered
DeMatteis’s career seems long on
pretension of this kind; it’s exactly the
sort of piss-elegance you’d expect
from the middle-brow drudge whose
real bread and butter is stuff like
Justice lxague and Martian Man-
hunter. But then, it’s the longiohn stuff
that’s virtually guaranteed his success
in his more esoteric endeavors; when
he decides to get all tony and adult,
the fanboy critics fall all over
themselves praising his name, because
they know from his super-hero books
that he’s one of their own.

By his own
admission, DeMatteis wrote this in a
very short time, stream-of-conscious-
ness, and it shows. In an Amazing
Heroes interview he marvels at the
process: “l just got out of the way and
said, ‘Okay, let’s see what comes out!’
And out it came!” (I perform roughly
the same function about an hour after
a big meal; I just don’t feel compelled
to share the results with Imple.) Ißt’s
just note that drivel is drivel, and
move on.

As for Williams’s washes, they’re an
achievement of a kind, but what kind
that is I couldn’t say. Whatever he’s
doing here, he’s certainly not cartoon-
ing. These days, publishers boast of
“painted artwork” as though such a
thing were unarguably superior to
pen-and-ink, but I can’t imagine
anything glummer than a steady diet
Of comic books that look like Blood.
(hinting can, of course, be a valuable
tool in the hands of a genuine
cartoonist; witness Bill Sienkiewicz.)
I have a feeling that the people
behind Blood thought they were
producing something refined and
extraordinary; they must have
reasoned that since it was cryptic and
diffuse, it had to be a masterpiece.

Marvel’s Blood. by
J.M. DeMatteis and Kent Williams,
Dolan says. • •has graphic pictures we
can’t even show you” and that
“women are inevitably the subject of
violence in these. ” Dolan explains that
although the content changed. “the
problem comes in when kids. young
kids. still read comic books.

That’s all I could find of contemporary mentions, but the series has been collected and reprinted.

This person was impressed:

Blood is something wholly different from a standard comic, with unique artwork and dialogue which reads like poetry. This book has an emotive resonance unlike anything I have read in the genre.

This one is less so:

I wouldn’t describe Blood: A Tale as an amazing or even particularly impressive comicbook. It certainly has its moments, and tries some brave things, and admirably never shies away from its own insanity. The writing can be a bit full of itself and the art isn’t always easily digestible, but even during its low points, this book has a very specific appeal.