And we’re back! This blog went on hiatus a month and a half ago because I just didn’t have time. But it looks like I’ll be stuck on the couch for the unforeseeable future (or at least in the apt), what with the virus sitch and stuff, so I suddenly have some time on my hands. (I was supposed to be holidaying in the US now, and going to the Big Ears festival in Knoxville, but, you know…)

The other reason why I paused the blog when I did was that this was the next series for me to read, and I just couldn’t face it. Spoiler warning: It’s shockingly readable. 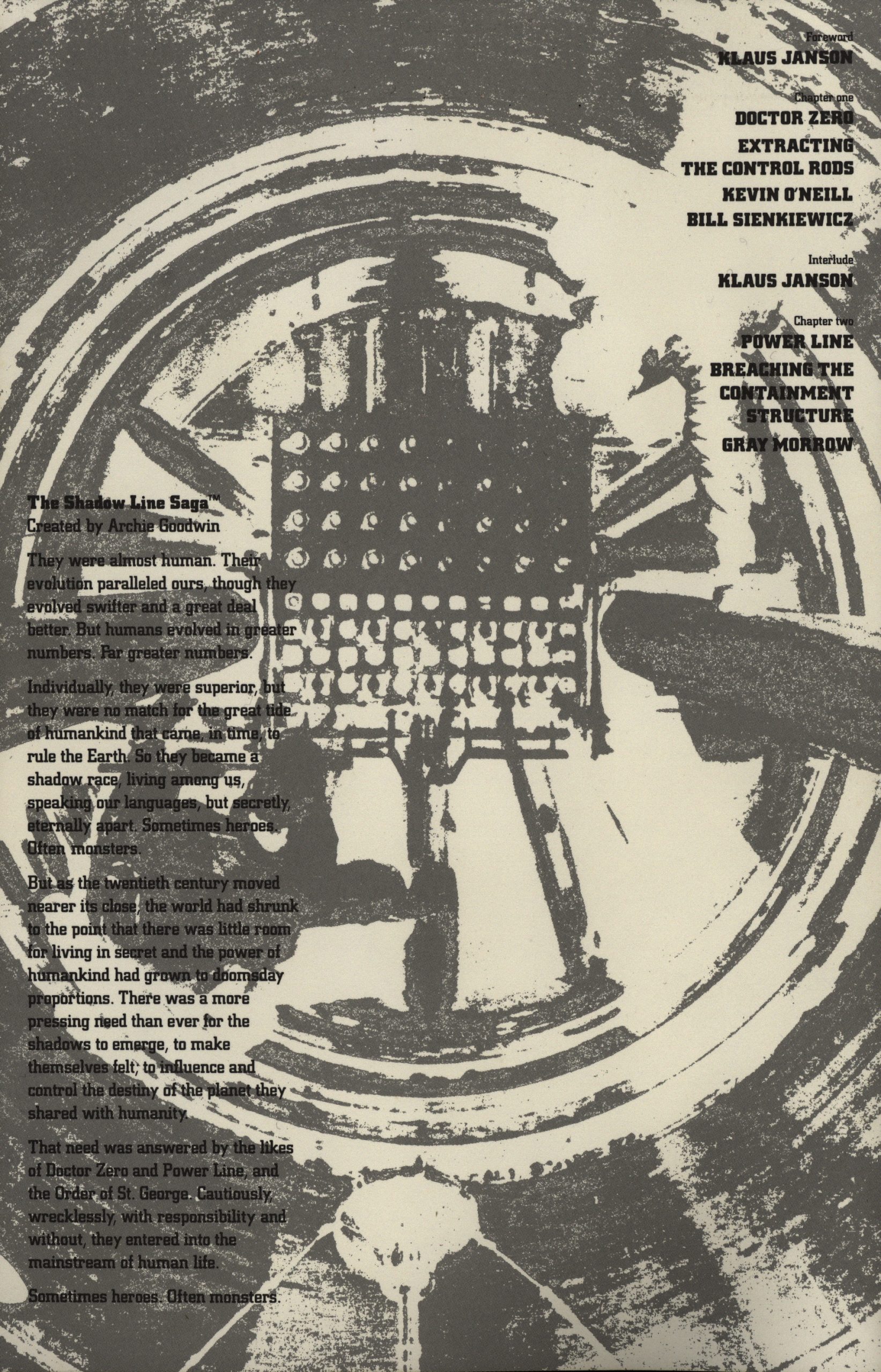 Epic editor-in-chief Archie Goodwin had (apparently) been told to create a shared super-hero universe for Epic, and he half-assed it by coming up “it’s The Eternals, but, like, dark”. Three series were published, each coming out every six week on a rotating schedule, and all written by D G Chichester and Margaret Clark. They ranged from OK (Doctor Zero) to unbelievably tedious (St George) via the bland (Powerline). All the series were summarily cancelled after their eight issues, just before a line-wide crossover was supposed to start.

I don’t know how far they were into making these issues, but they decided, anyway, to squash all three series into one, and publish the 15 issue crossover as seven square-bound 64 page issues (and one 96 page final issue). This allowed them to increase the price to $5 per issue, and perhaps they thought the added caché of the “prestige” format would give them some extra sales. 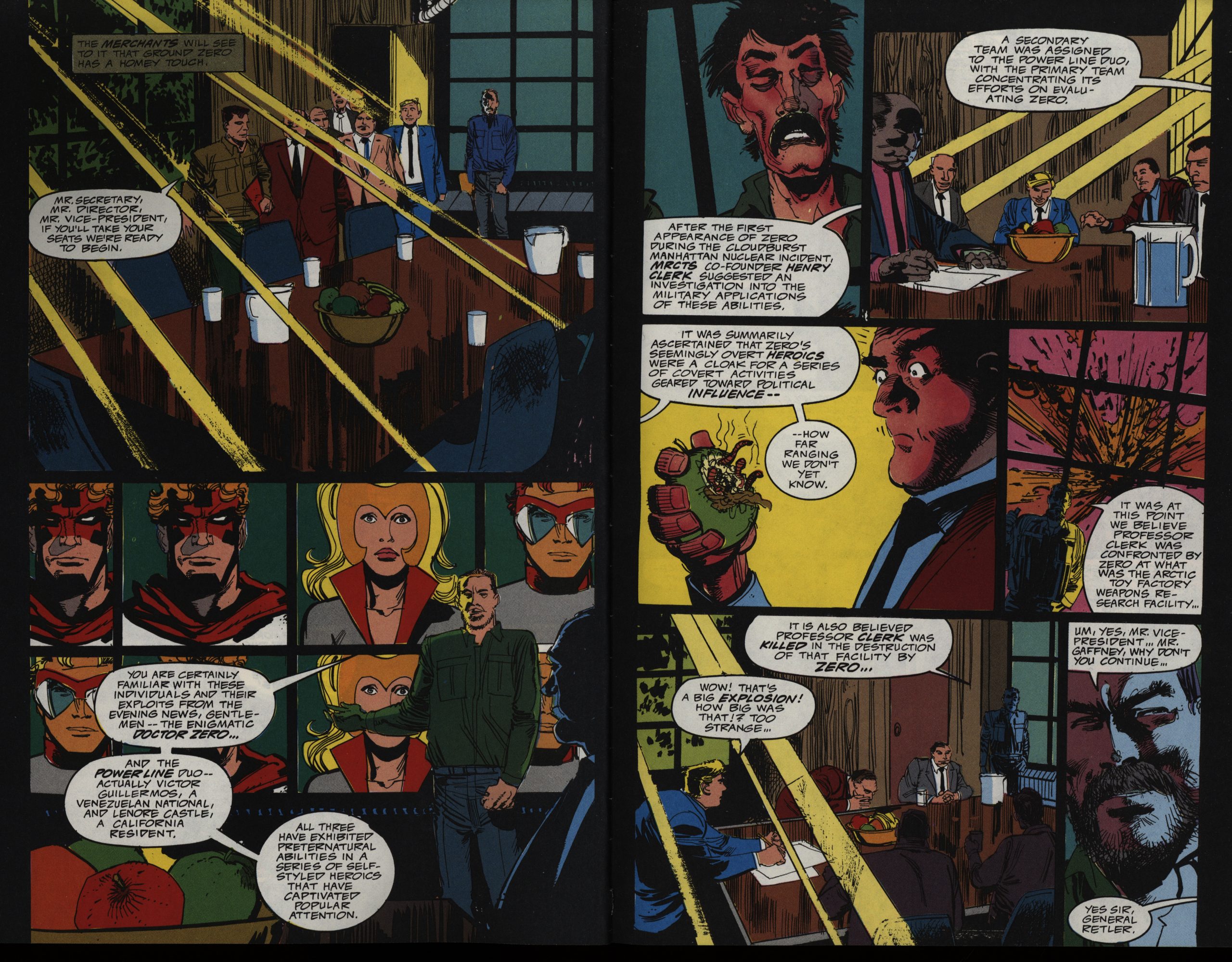 So I was dreading reading this series: It’s a collection of something that was already cancelled, and it’s a crossover. The horror!

But then it turns out that the first er “chapter” has artwork by Kevin O’Neill and Bill Sienkiewicz! It looks great! And somehow, perhaps just because the artwork is better than expected, it somehow becomes intriguing. 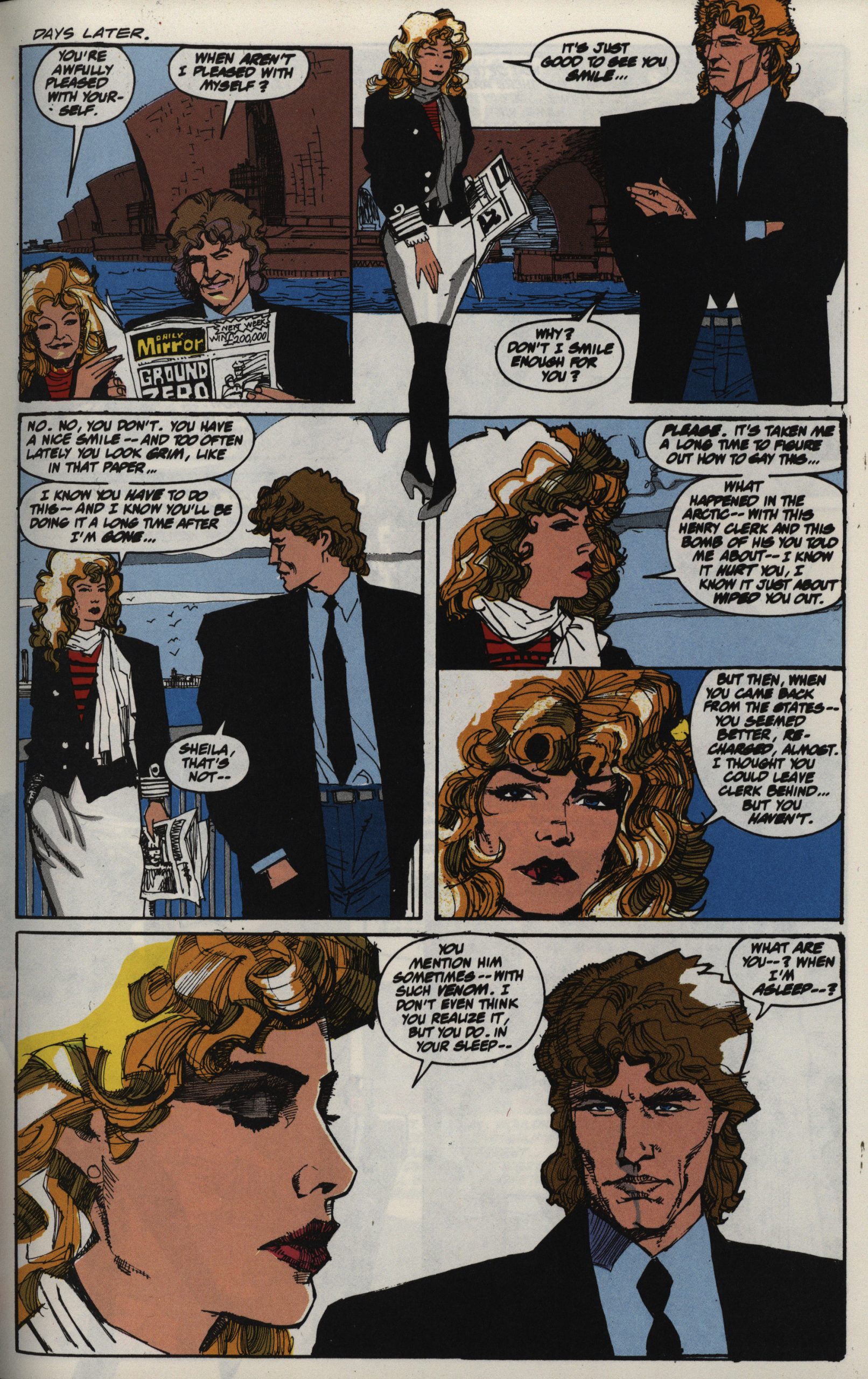 Something that has really gotten on my tits while reading all these Epic comics is that we almost always get a recap of what’s gone on before. I had hoped that this was an edict from Goodwin, and that now that he’d been fired from Epic I mean left Epic, we’d dispense with that. But, no, a couple of pages of each chapter here does recapping, and sometimes from the chapter we’ve just read. I guess that may well be a reflection on how these were originally to be published. 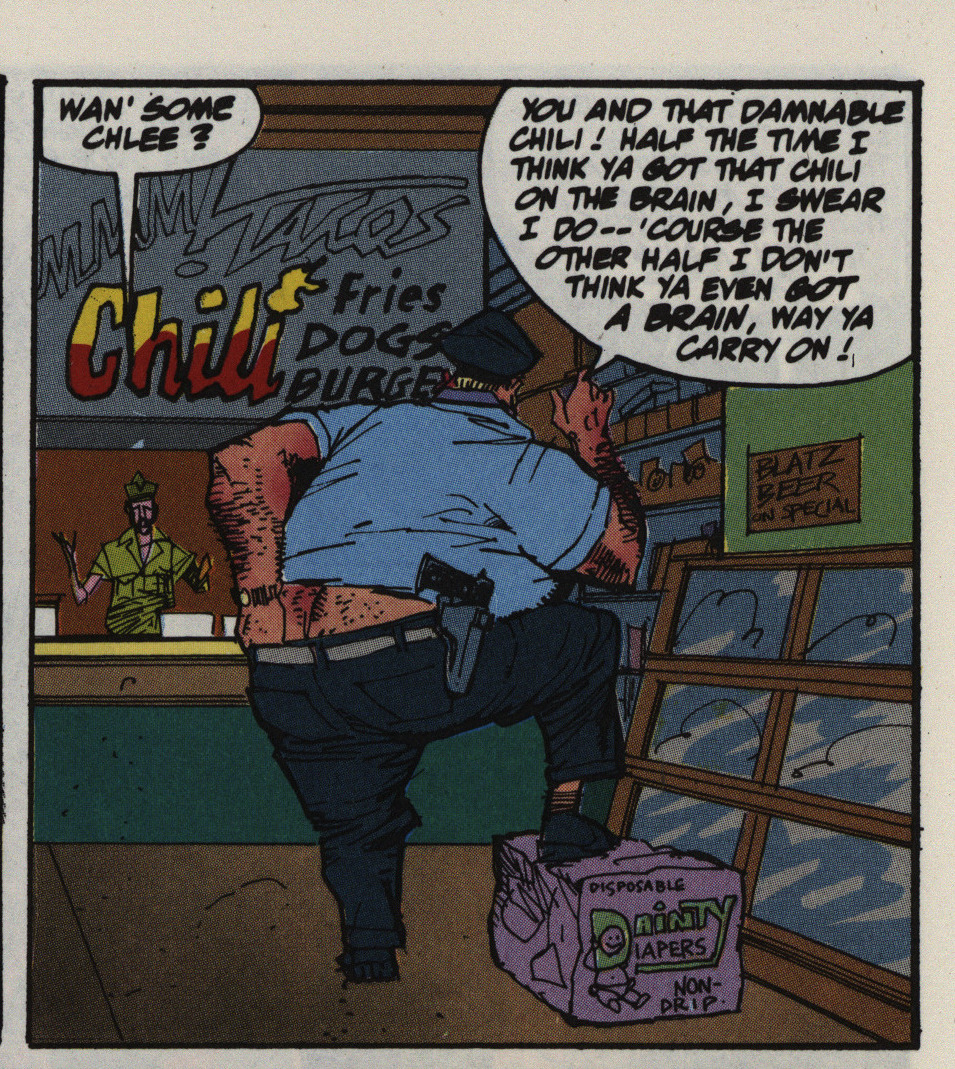 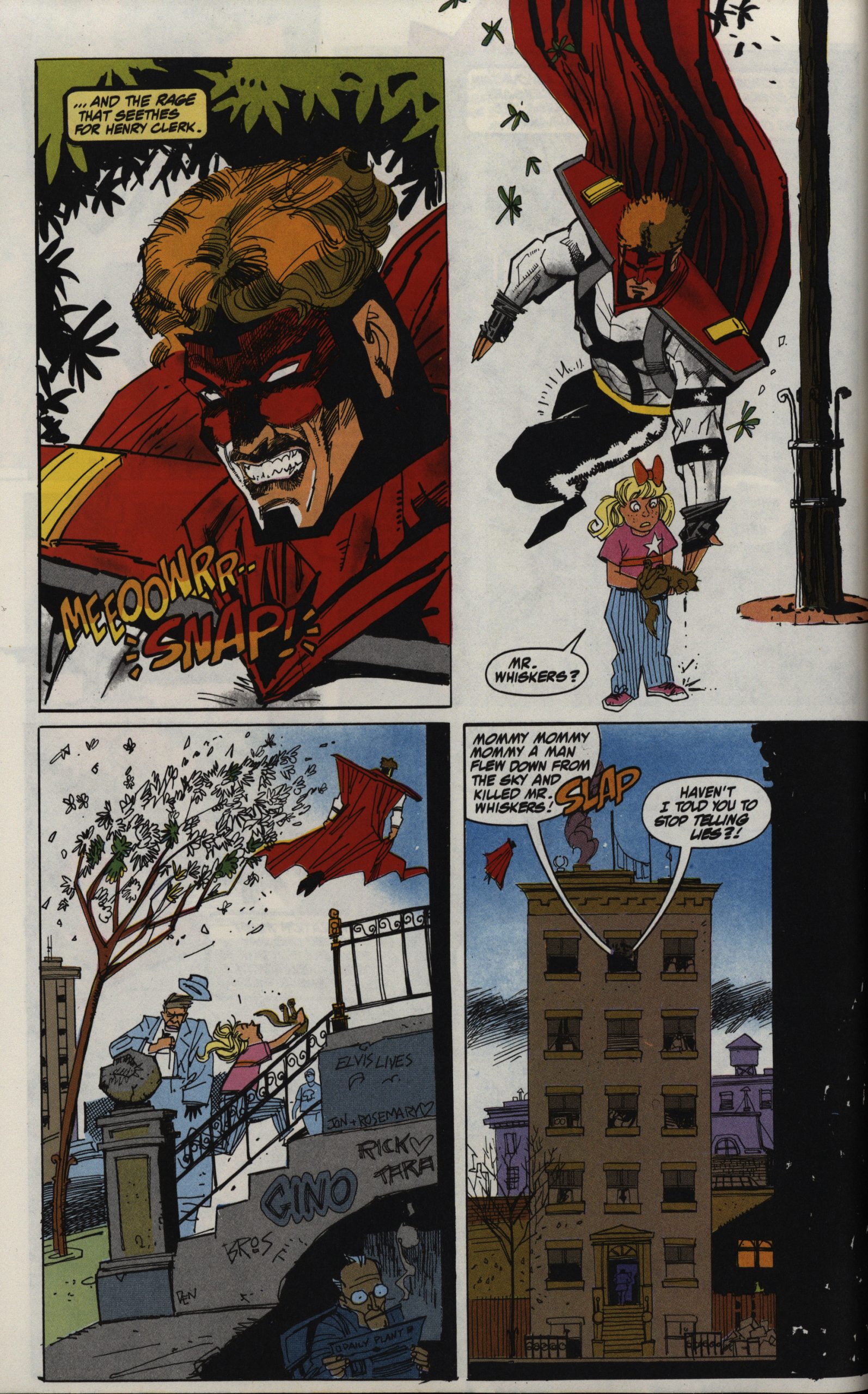 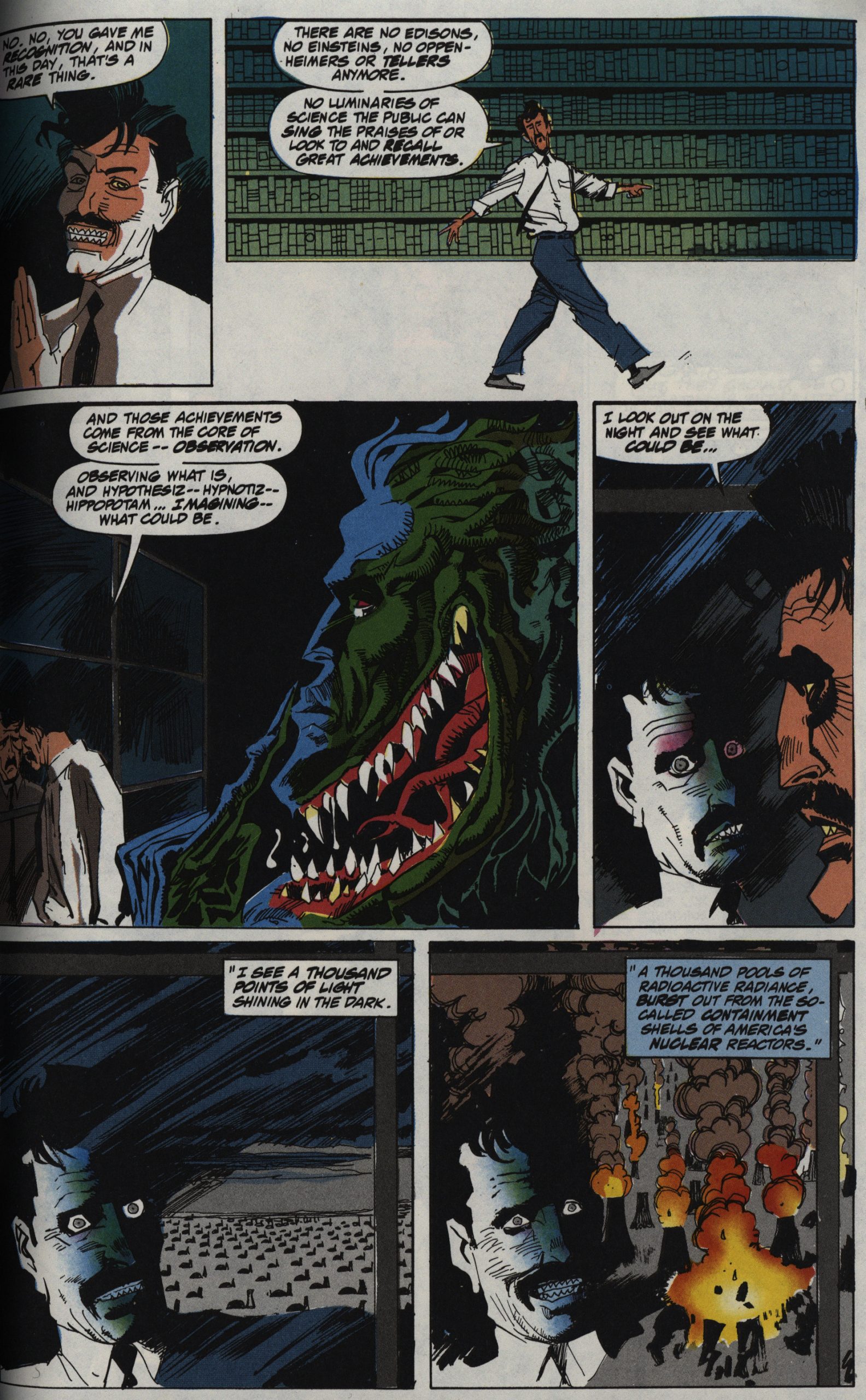 The main plot of the crossover is simple: An insane guy wants to blow up the US. (Pictured above.) It’s not big and it’s not clever, and I thought that this couldn’t possibly sustain 480 pages of these series, but it rather does. It’s a pretty brisk read (if you skim the recaps) for this sort of thing, and there’s enough characters with different agendas intertwining to keep it going. Unfortunately, Sienkiewicz and O’Neill just do 32 pages, and the rest feature a random cast of artists. The only series in here that has the same artist throughout is Powerline, which has Gray Morrow. He’s fine, but some of his pages are very, very oddly coloured. And he didn’t do the colouring himself. We get 30 pages of Kyle Baker, and he mostly keeps to a six panel grid, with some wider panels here and there. Very entertaining to look at. 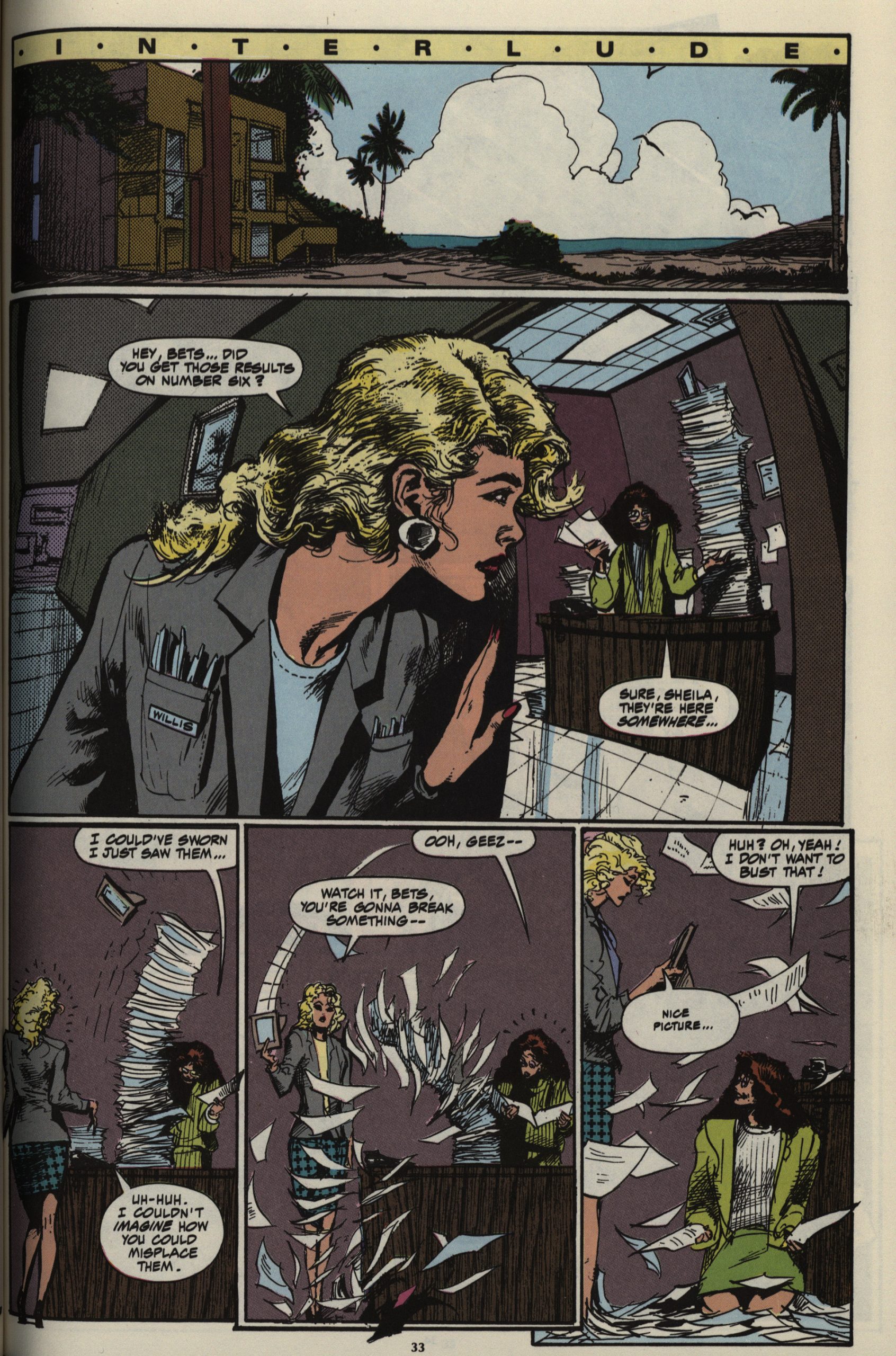 We get these interludes that bridge the issues; here drawn by Mark Texeira. Looks pretty great, huh? 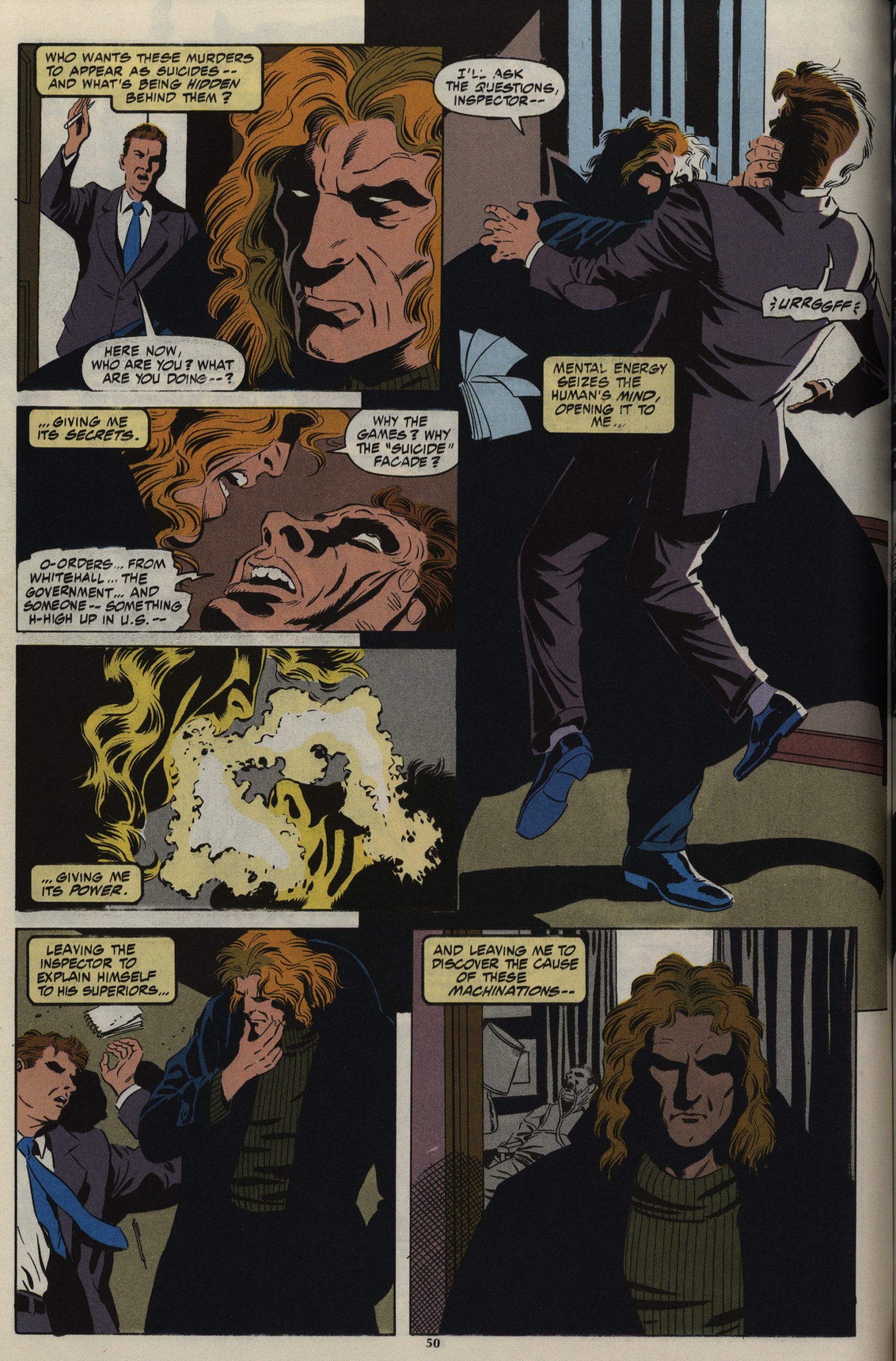 Unfortunately, most of the main chapters have less inspiring artists, like Mike Manley above. I mean, it’s readable and there is a certain something about the start lines… 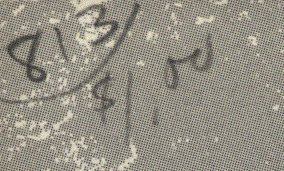 Heh. I guess these weren’t sought-after collectors’ items: Marked down to $1. 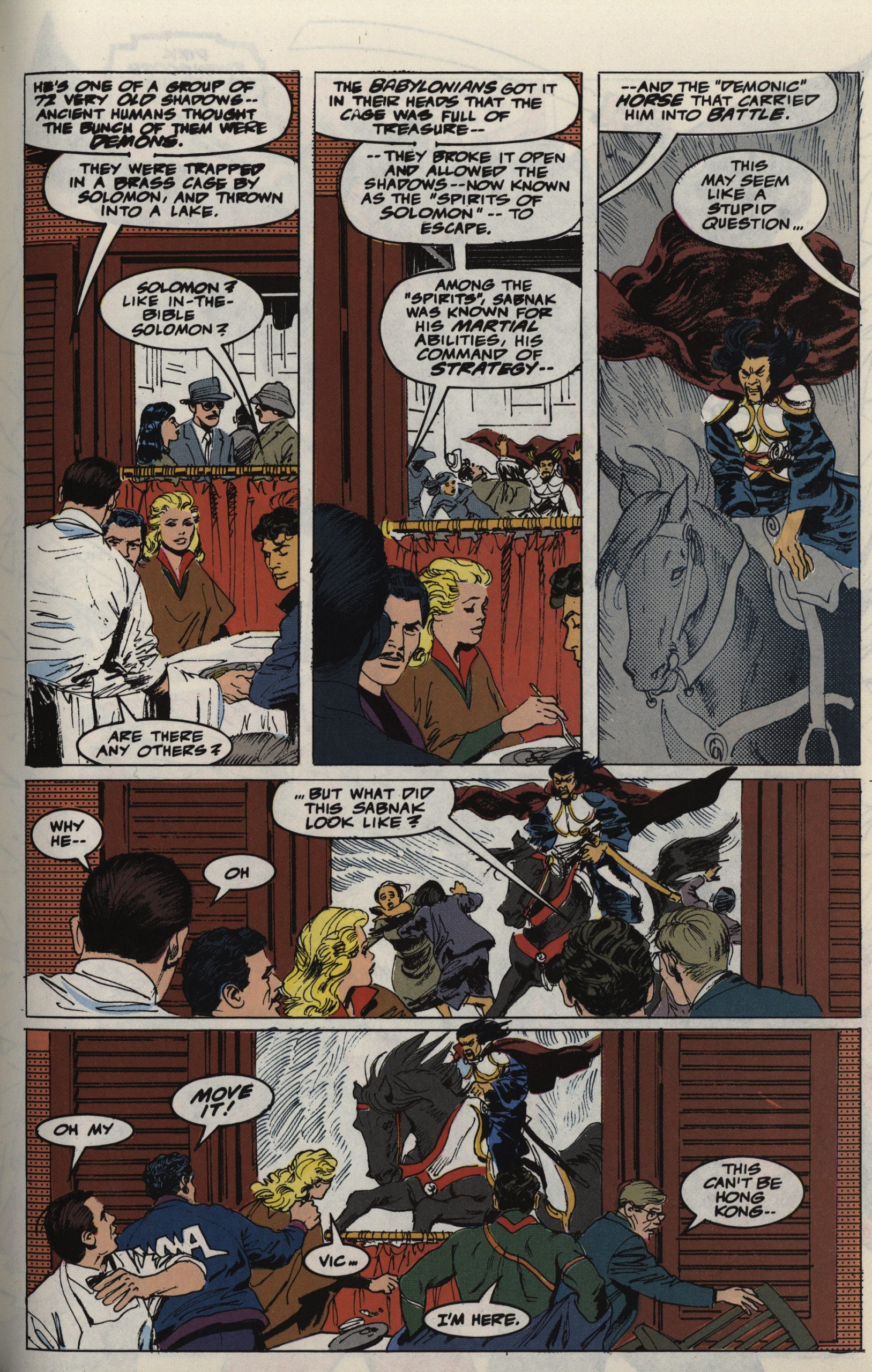 The storytelling in these issues is pretty straightforward. There’s some hints at “modern comics”; there aren’t any thought bubbles or omniscient narration, but it’s also sometimes rather sloppy. They introduce the villain above on the preceding page, and expedite him over the next couple pages. They could have, for instance, teased him earlier and then let him loose (I know, it’s a cliché), but they just do this thing, and it feels a bit haphazard. I think the 90s are definitely upon us! That’s Jim Lee, looking kinda half-way between Daredevil-era Frank Miller and the Image house style. The most interesting artist over the last half of the series is Jorge Zaffino. His rough, sketchy, soaked-in-ink artwork gives the material mystery and gravitas that it perhaps doesn’t deserve, but whatever works! It’s readable and interesting. Since the plot is so trivial, they have plenty of space to fill us in on the motivation of the Evil Villain: It’s because he was bullied as a nerdy youth.

And, of course he fridges Doctor Zero’s girlfriend. And he does it because he wants Doctor Zero to be angry. 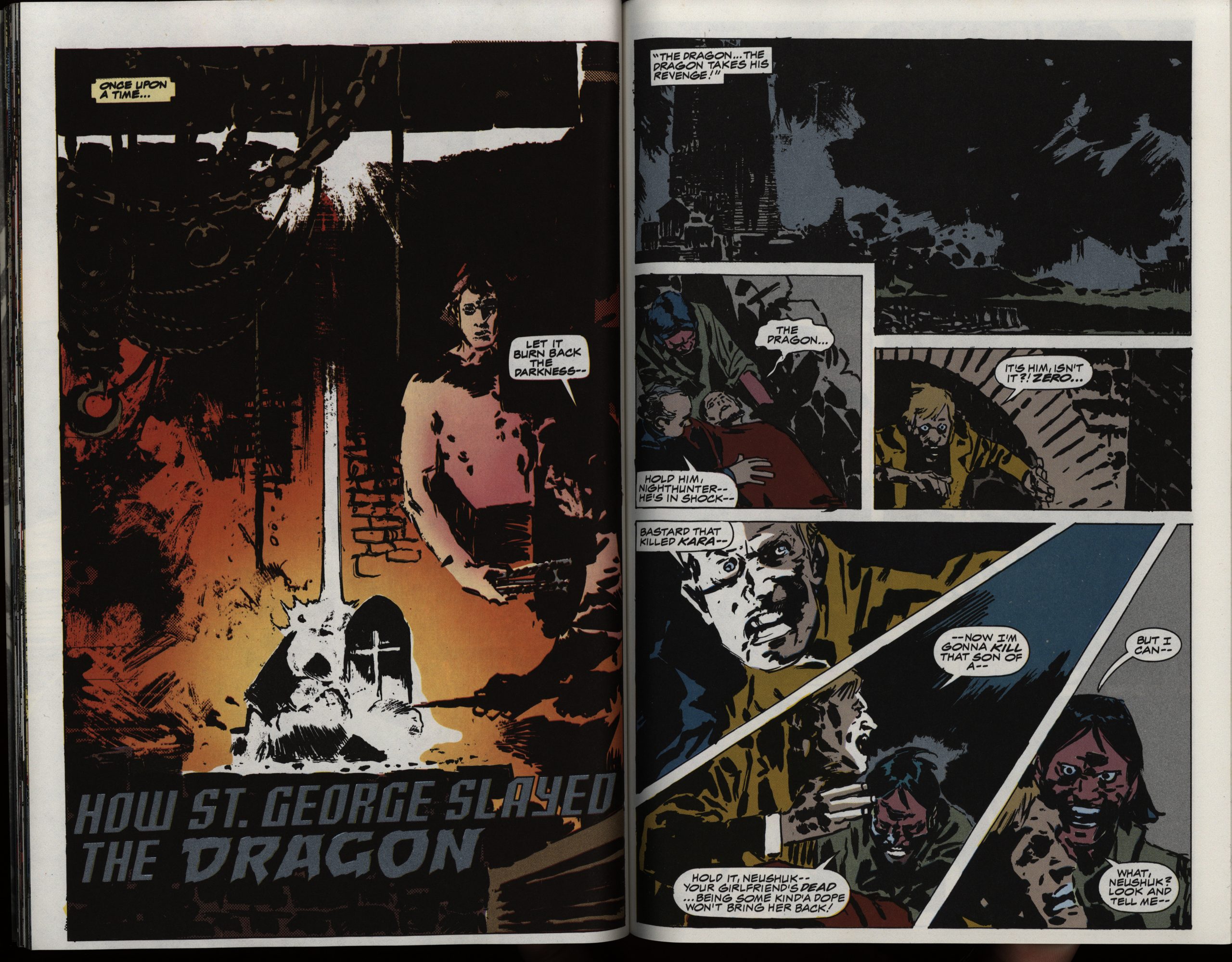 I just wanted to show this Zaffino spread, I think? I can’t recall what I wanted to comment on… Spoilers: It turns out that the plot of the Evil Genius Villain is super-duper moronic: He wants to set off a chain reaction of all the nuclear plants across the US. Fine. But the way he’s rigged it is that: He makes one plant go boom in person. Then, when the sensors of the other plant detects the radiation in the atmosphere, they’ll also go boom.

He couldn’t, like, just have made them go boom on a timer or something? No? OK, I guess I’m just not an evil genius like this evil genius… Anyway! Spending an evening with these issues was a lot more entertaining than I had expected. Sure, the plot is piffle, but it moves along well, and fun stuff happens, and about half the artwork is pretty good. That’s way more than I bargained for. I would even go as far as to say that if you like this sort of thing, this thing might be one of those things you may like.

How’s that for a recommendation?

I collected the “Shadowline Saga”
books from Epic because the idea of
a secret race paralleling humanity has
long been one that fascinated me.
True, the that comprised Epic’s
“Shadowline Saga” were a tad
uneven—but at their peak they were
a lot of fun.

The plotting seems tighter here than
in the regular books, most likely
because there is a lot of stuff to get
into each issue. The dialogue is better
than in the regular books as well.
The prologue and interludes are
drawn by Klaus Janson, who does his
usual solid job—not inspirational art,
but much better than the average. The
couple, Kevin O’Neill and Bill
Sienkiewicz, do some witty and
peculiar things with the Doctor Zero
segment. Both artists use jagged lines
and tend to avoid weruse of curves,
so the overall effect is harsh and
cynical (which reflects the Zero
character perfectly). Gray Morrms,t
turns in a nicely drafted Power Line
chapter, but as usual I find I would
prefer to see him on something else.
Technically, his work is right, but it
lacks the fire he can show. If anything,
I think his work is a tad perfunctory
here.
All in all, Critical Mass #1 rnanages
to avoid being a critical mess and
comes offas a good, solid rnainstream
super-hero adventure. Had the
“Shadowline Saga” books mainuined
this level of quality they might not
have been canceled.

With the release of Critical Mass #7,
the “Shadow Line Saga” has finally
ended, and I simultaneously feel
hollow, elated, and disappointed.
I feel disappointed because after six
long issues they couldn’t come up with
something a little more creative for the
“shattering conclusion” than the Su-
permanesque transporting-of-the-evil-
radioactive-complex-into-outer-space-
so-it-won’t-harm-anyone cop-out. I
feel disappointed because for the
“shattering conclusion,” instead of
one final epic tale, there were three
short and wholly unsatisfying separate
endings.

So what really hurts is that the
concept almost worked, which leads
me to hopethat this is not the end of
the Shadow Line Saga (after all, Dirk
Ravenscore is still alive). And if the
Shadow Line Sage should ever be re-
vived, I have the perfect suggestion for
a follow-up title: “The Adventures of
Shreck.” As strange as it might sound,
I thought Shreck, the man of replace-
able parts, was the most intriguing
character in the book. How about it,
Margaret and Dan?

That did not happen, of course.

These were not fun comics by any stretch, but they were intriguing. The concept wasn’t unique, but the characters were. The mythology was deep and complex and the books only scratched the surface. There were more stories to tell and it’s too bad we’ll never see them.

I don’t think any of the Shadowline books have been collected or reprinted.