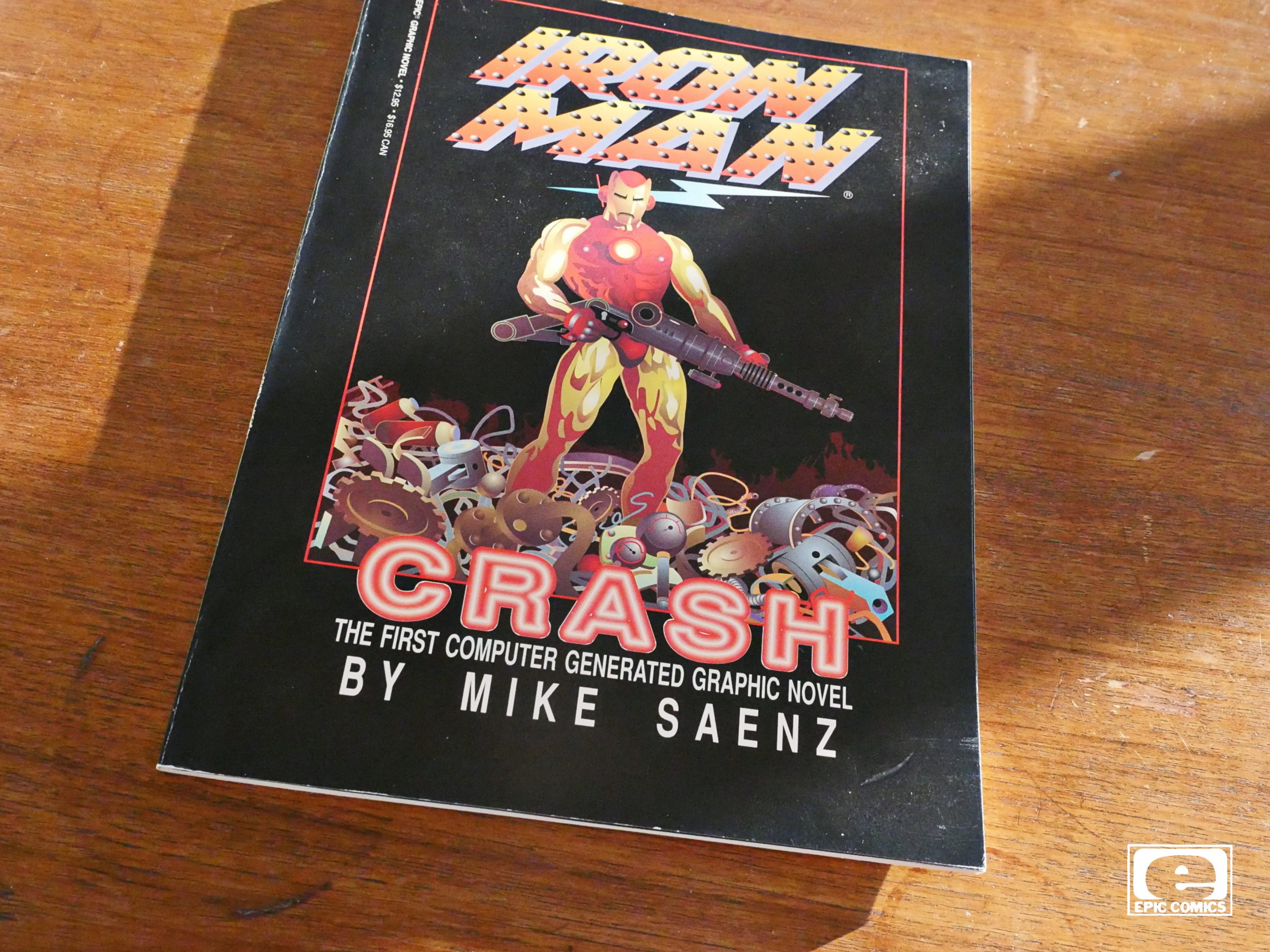 Epic had been in the doldrums for a couple of years. The original remit (lure name creators back to Marvel by offering them creator ownership) wasn’t a huge financial success, because what sold in comics shops (after the novelty of all these odd books wore off) was super-heroes.

Epic editor Goodwin didn’t want to do super-heroes, so very few new things were launched in 1986-87. And then he was persuaded to change his mind, and the result is 1988: We get a handful of “fancy” Marvel-owned books (this, and the later Havoc & Wolverine series, and the Moebius Silver Surfer), and Epic also launched its own super-hero universe. The latter initiative lasted longer than the former, and several of the series from the old regime were still being published, but Epic Mk I was effectively dead.

As the cover says, this is the first computer generated graphic novel. I hear you saying “but what about Shattered?”, also by Saenz. The colours there were done traditionally, so it’s more of a hybrid. This one is printed straight off of the output printed from the computer: The colours are also done in the computer, which makes this a first-off. 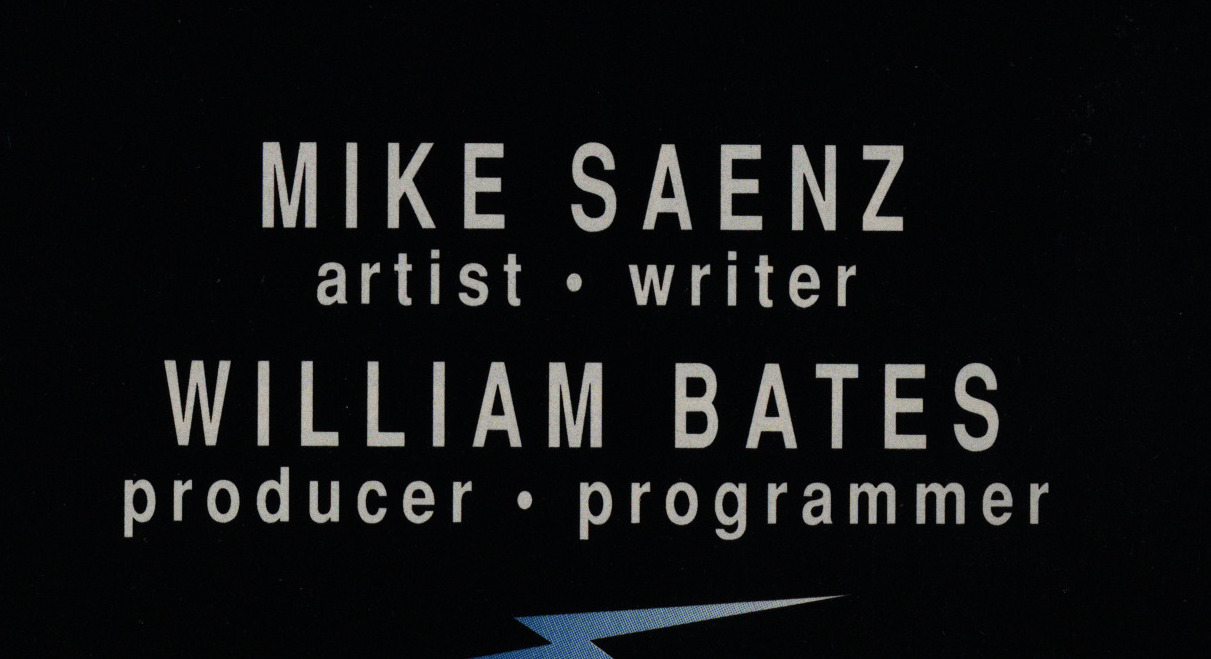 So Saenz had to get a guy, Bill Bates (yes!), to write him software to make it all possible. 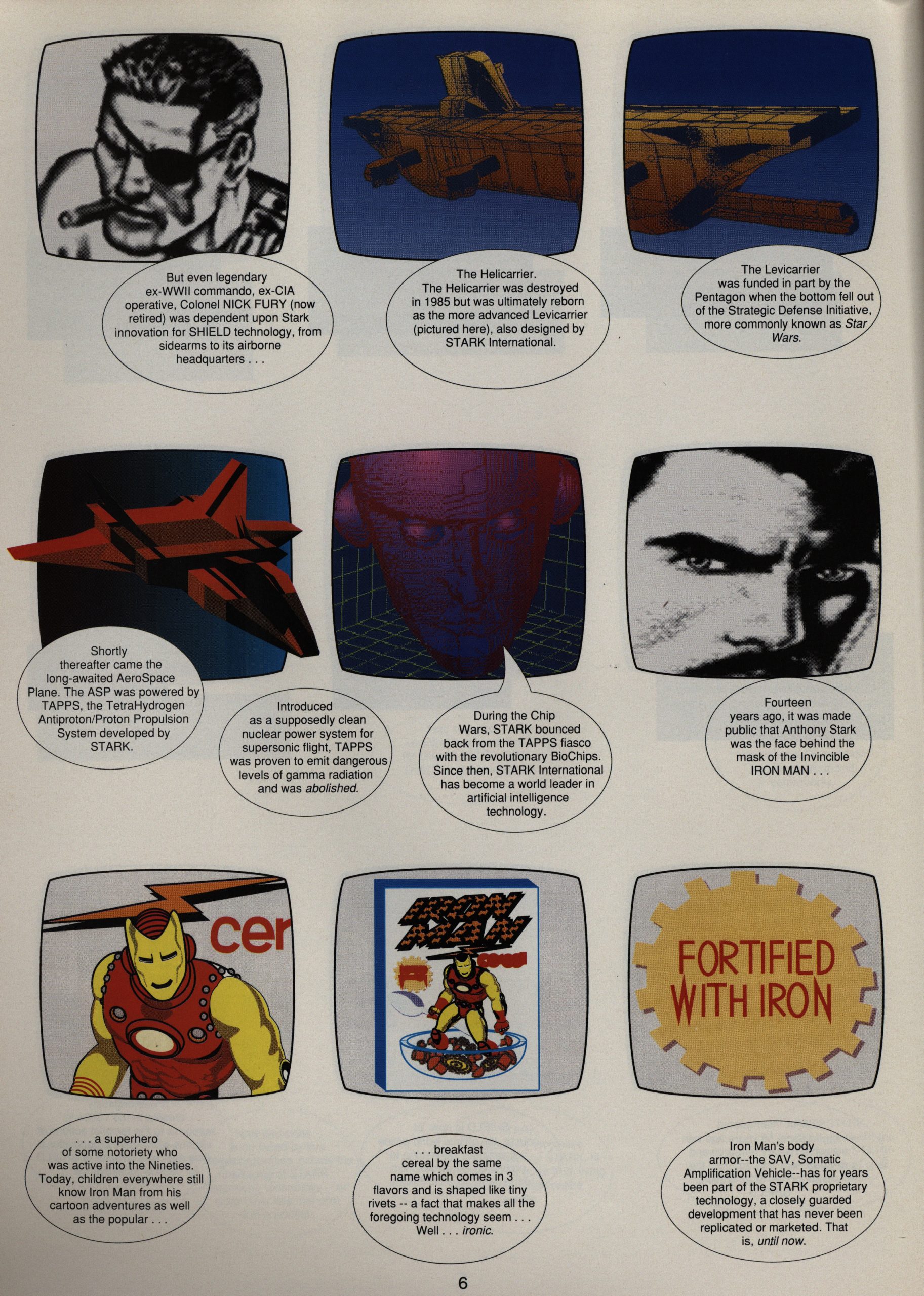 This page has a bunch of the different approaches used. The drawings are mostly source from coarse bitmaps that’s then smudged a bit to avoid the jagged edges. There’s some colour 3D modelling. There’s the occasional bezier curve drawing, but very seldom. And the lettering (and the balloons) are very hi-dpi indeed: Almost disturbingly so. 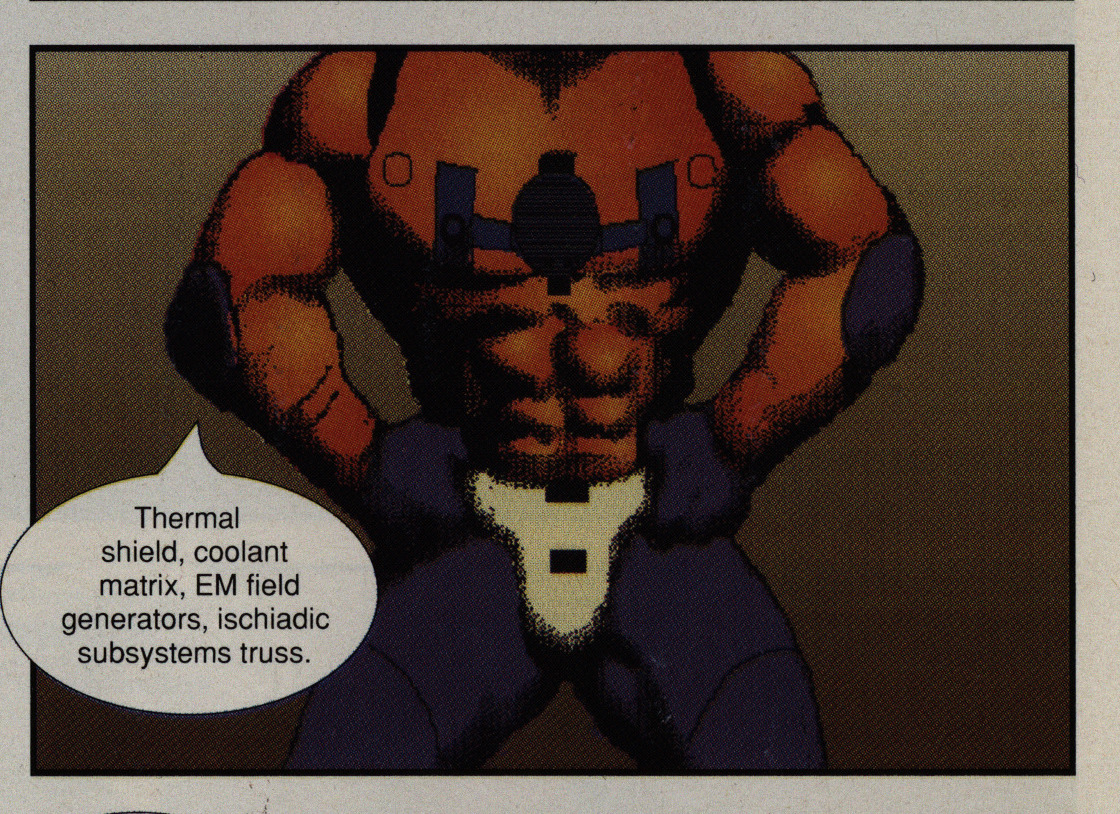 They look like they’ve been typeset separately and then glued onto the low-res images, but that’s not they case: They were composited in the programme specially made for this comic. 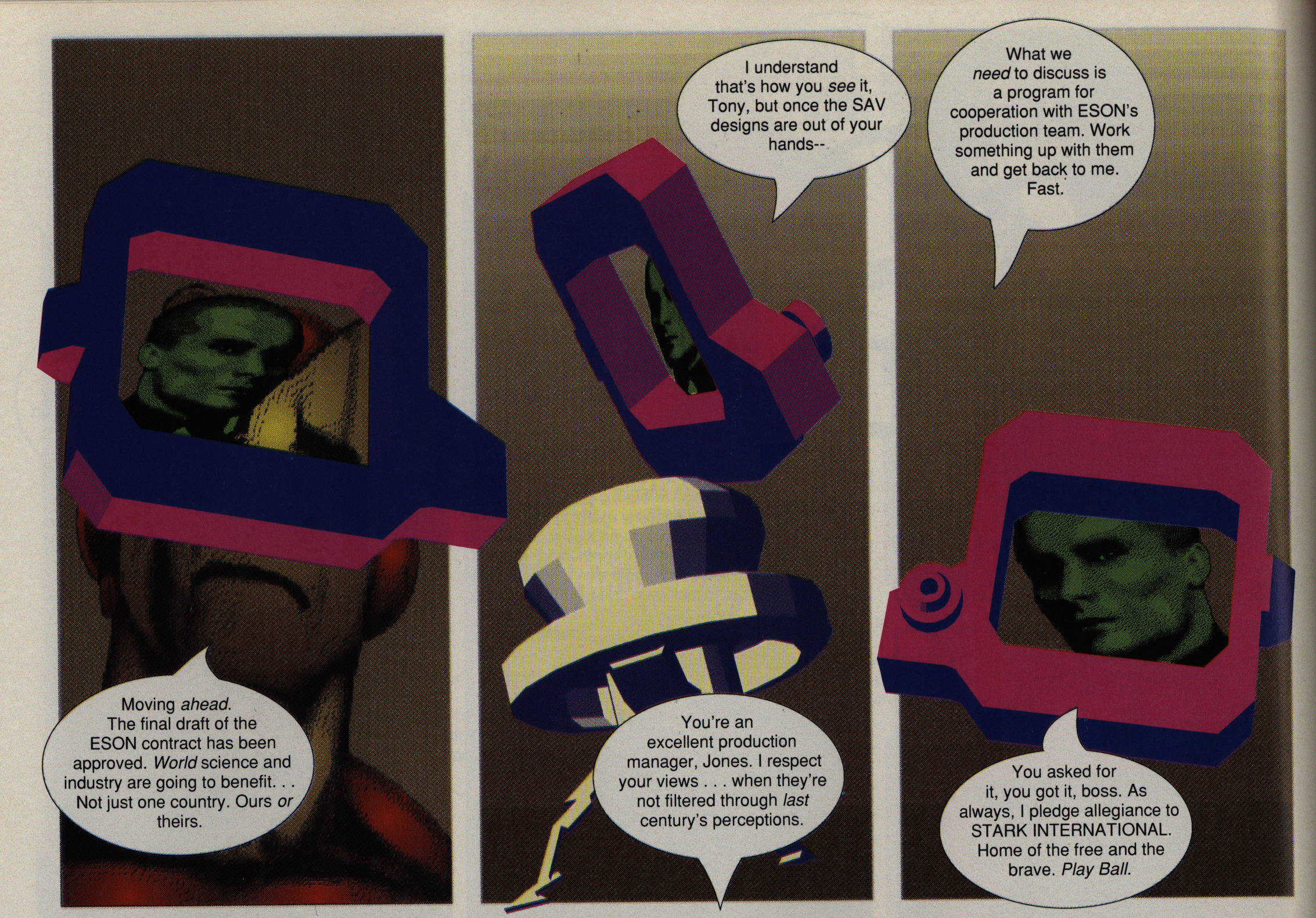 Some of the faces look like they’re digitised actual people, and combining that with the non-existent background and these 3D bits, you get the feeling that… this is more a woolgathering exercise in not having to actually draw, because that’d be boring? 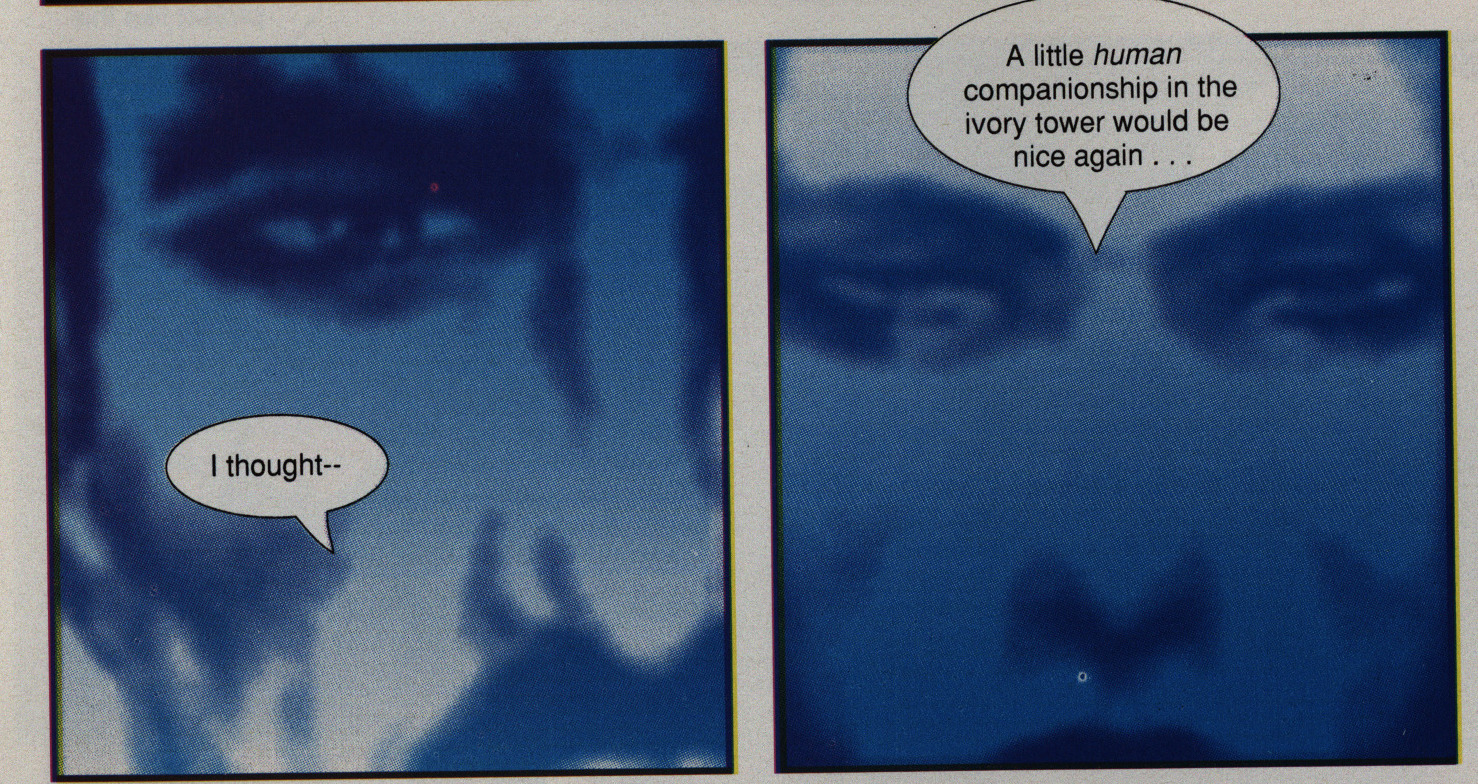 Much of the comic makes you feel that your glasses need a new prescription: Low-res images upscaled and blurred. 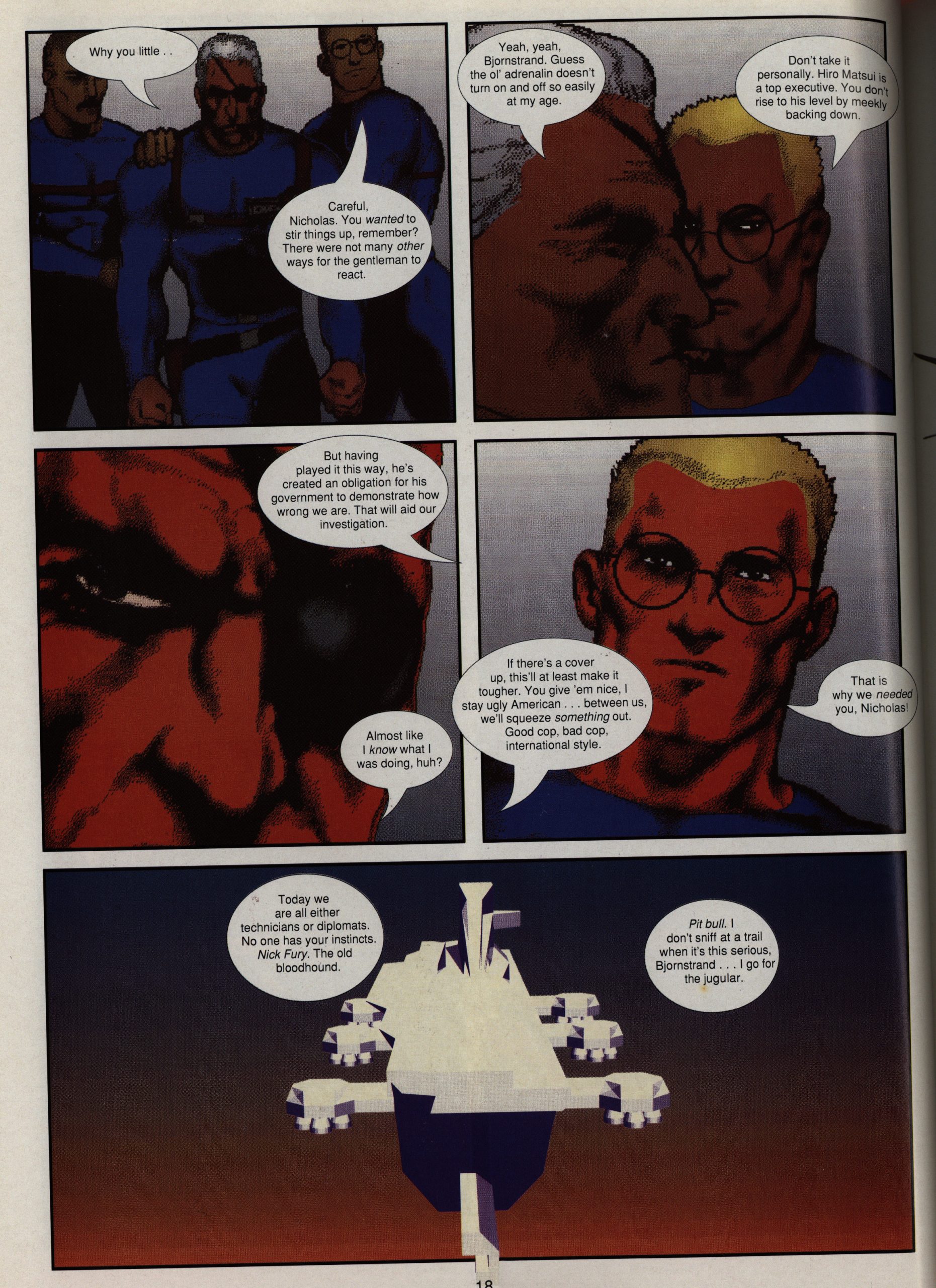 I guess I shouldn’t only talk about the novelty of the artwork… This is an Iron Man book, but it’s set in the future and is “non-canonical”, I guess. It’s about Tony Stark selling off the Iron Man technology, and then… regretting it? I’m actually a bit vague on what the plot was, because it was hard to pay attention while reading page after page of the above. It’s mostly men standing around gradient background spouting serious dialogue, none of which is interesting in any way. 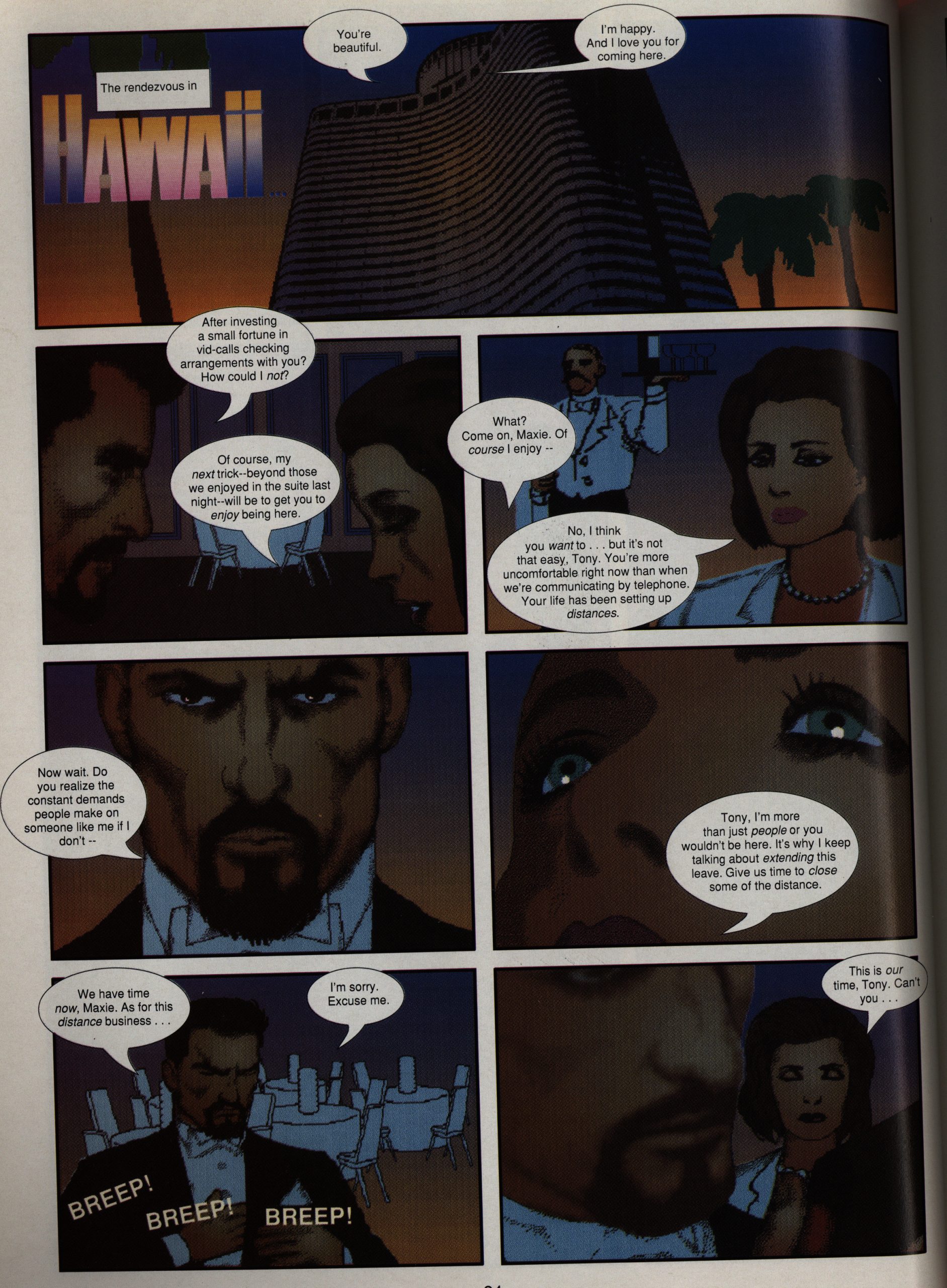 I guess the storytelling is dictated by the work methodology: Since he’s drawing in a very low DPI, he’s most comfortable doing faces in extreme close-up, which means that we’re just getting one conversation after another. 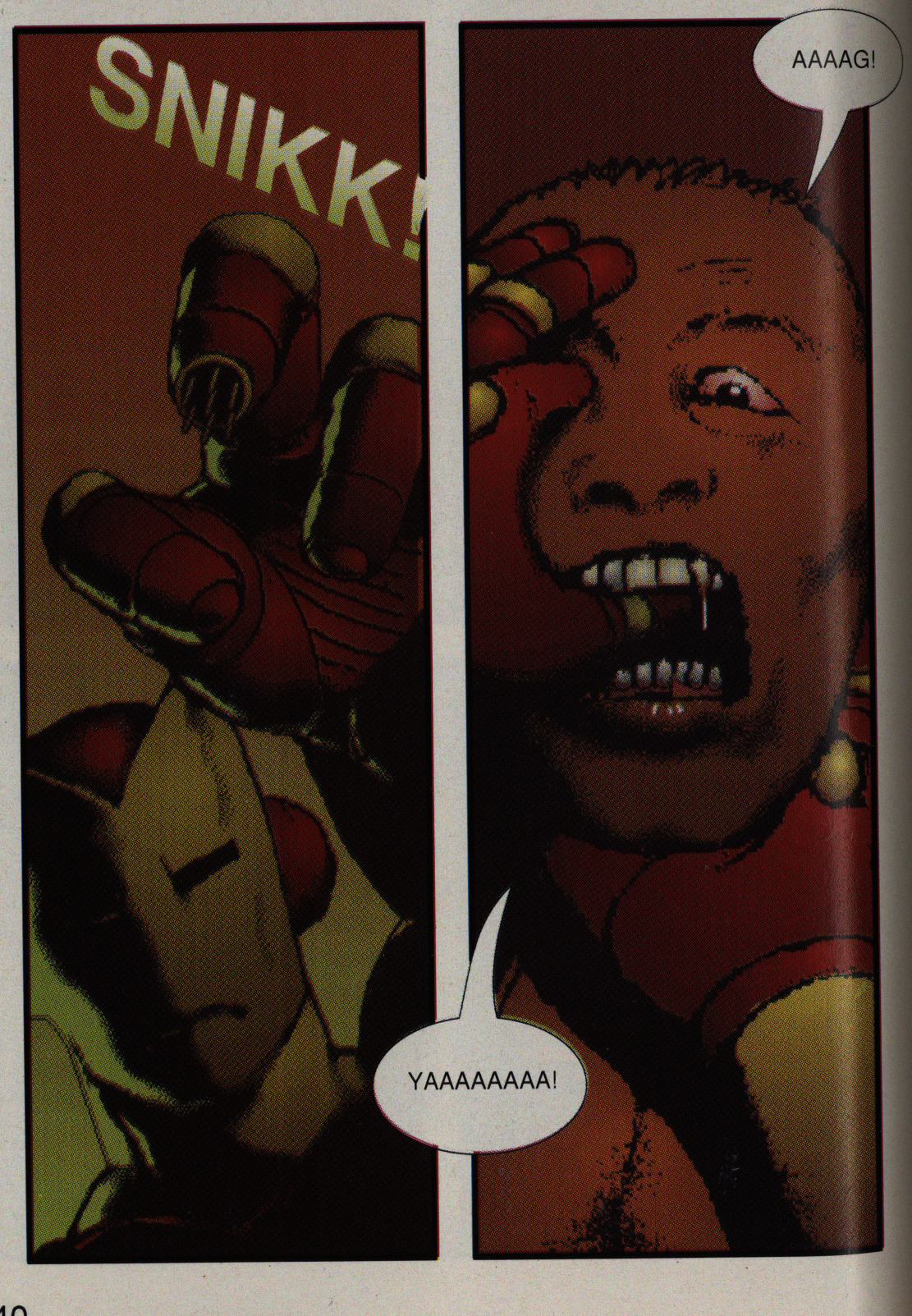 It seems unfair to be so unimpressed by the results of this impressive technical feat, but the artwork is mostly uninspiring. This is the only bit that made me go “wow!” It looks kinda like a cyberpunk Richard Corben, right? Very nice indeed. 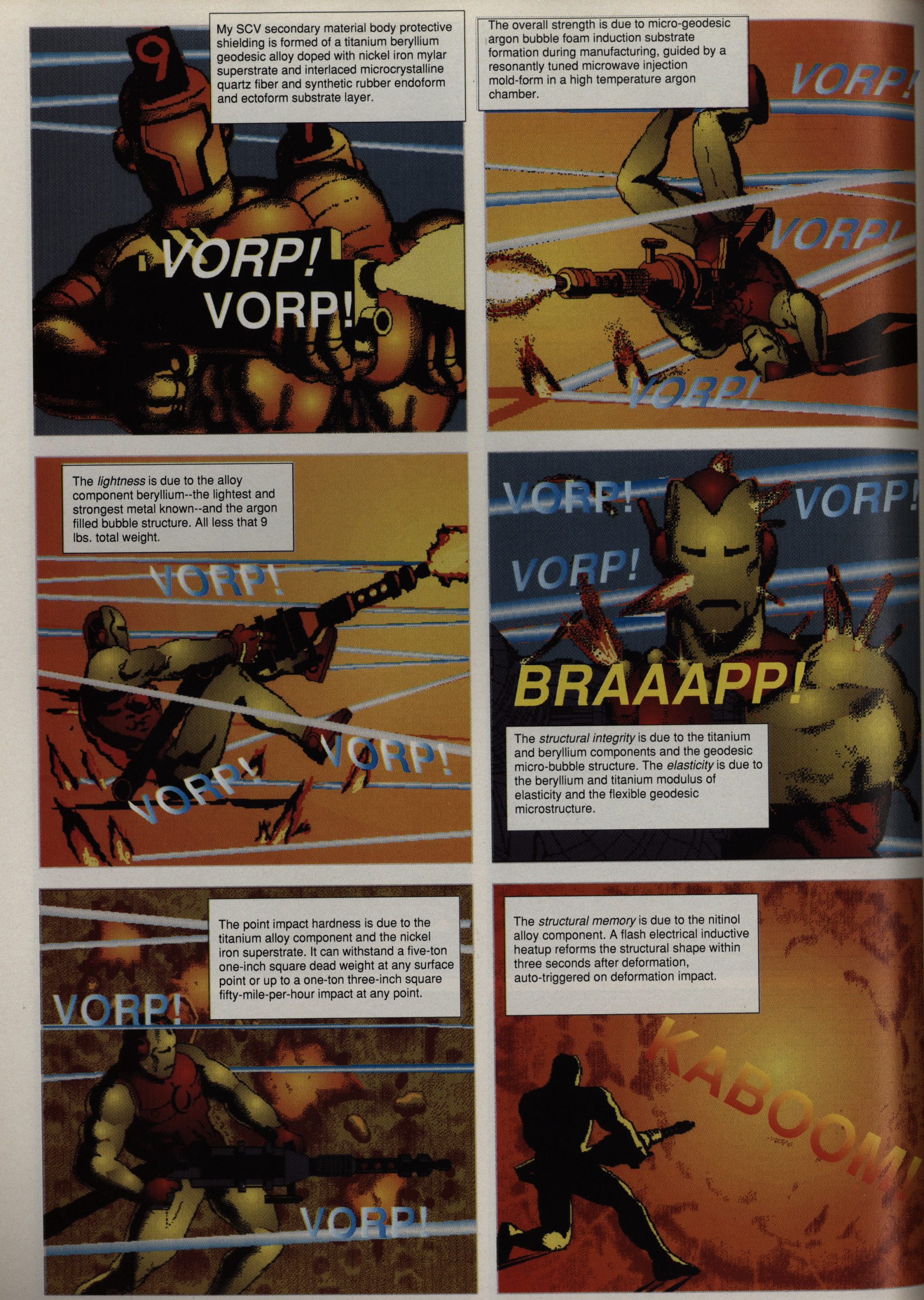 I have to admit that my mind went wandering while reading technobabble pages like this. But the “VORP!”s are fun.

We get an afterword about the technical aspects of the book. I like the “Computed Aided Comic Art (CACA)” acronym. 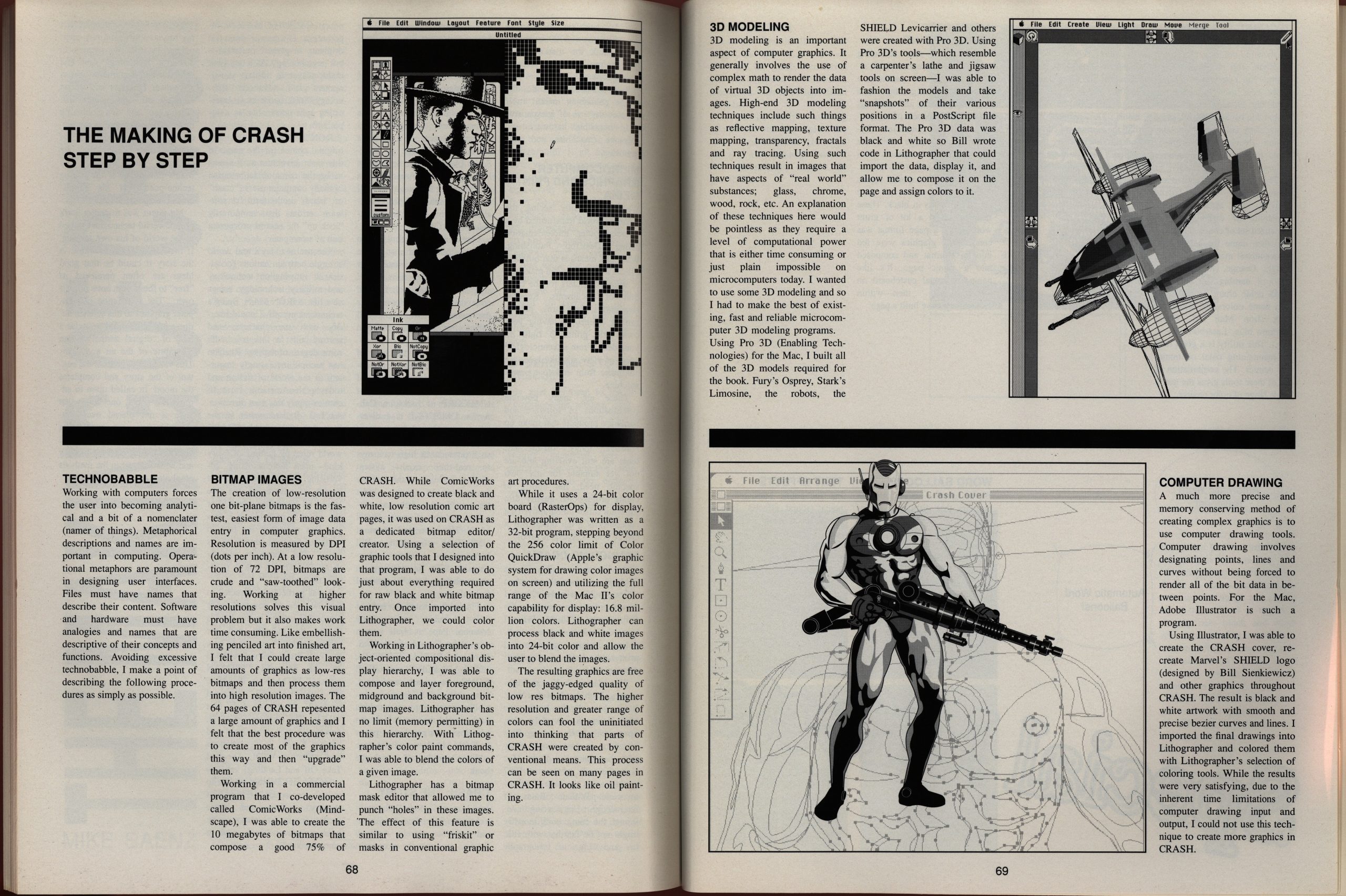 Saenz goes into admirable detail… and I’m sorry to say that I found these pages more interesting than the actual graphic novel.

You’d think this graphic novel would have gotten a lot of attention at the time, but I was unable to find anything about it from that time. It’s never been reprinted, either.

But here’s a review:

To be honest the story is pretty dull and not told particularly well. Saenz slips into technobabble far too often and the story drags. But who cares, it was ‘the first ever computer generated graphic novel’, that’s pretty cool… right?

Well, no. Not really. What must have sounded like a good idea on paper (or should that be print-out?) didn’t translate very well when put into practice.

There is no doubt that the very fact that this comic book wa s drawn on a computer has a novelty value, as witnessed by th e announcement of this on the cover of the book .

The verdict ? ‘Iron Man: Crash’ is best regarded as an artifact from the pop culture of the late 80s, rather than a groundbreaking addition to the comic book / graphic novel canon.