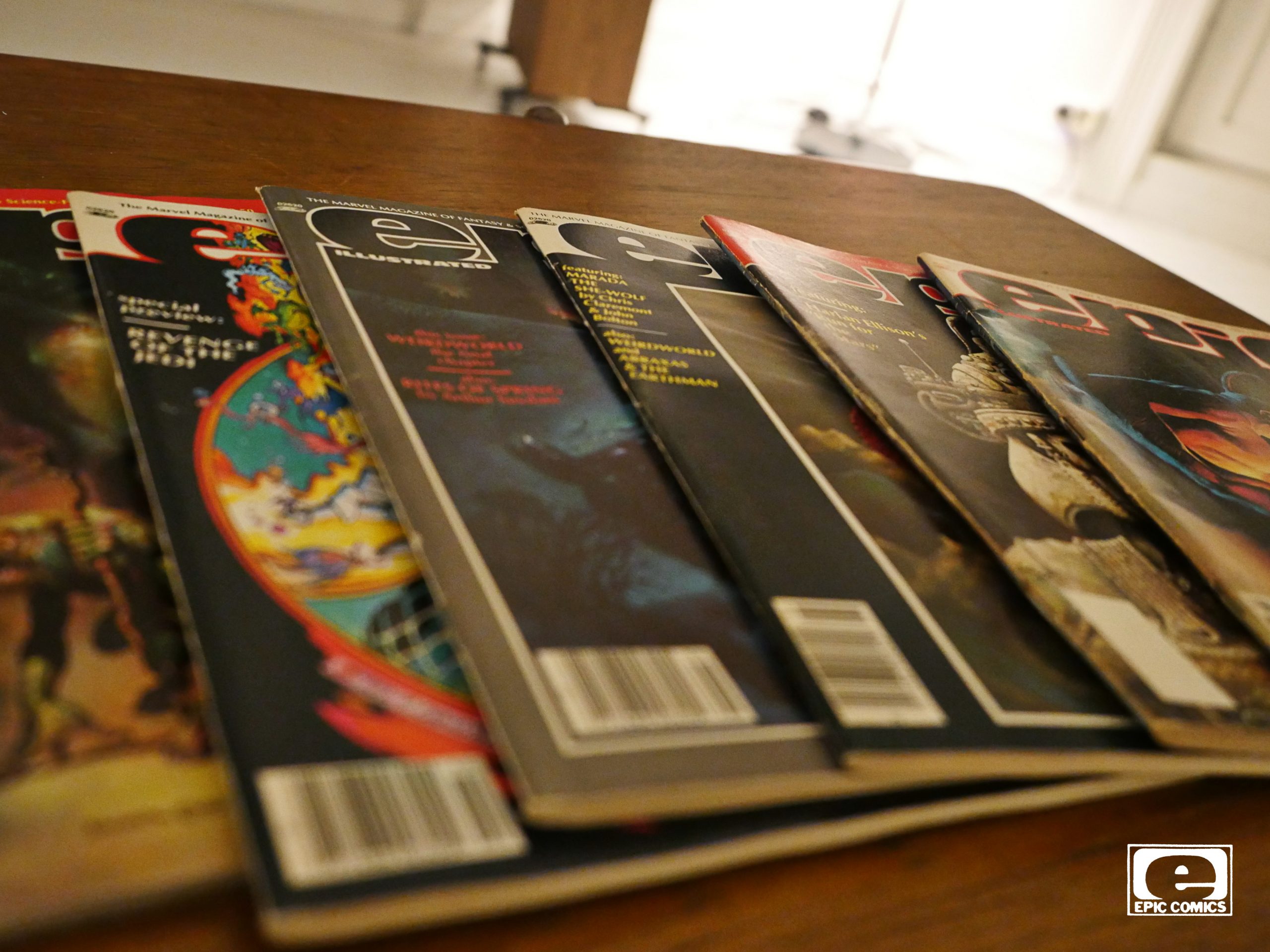 This blog series is progressing a whole lot slower than I had imagined, but things how just… gotten in the way. But the next few days should be clear, so I hope to get through the Epic Illustrateds by the end of the week, at least, and then we can start on the ostensible subject of this blog: Epic Comics. 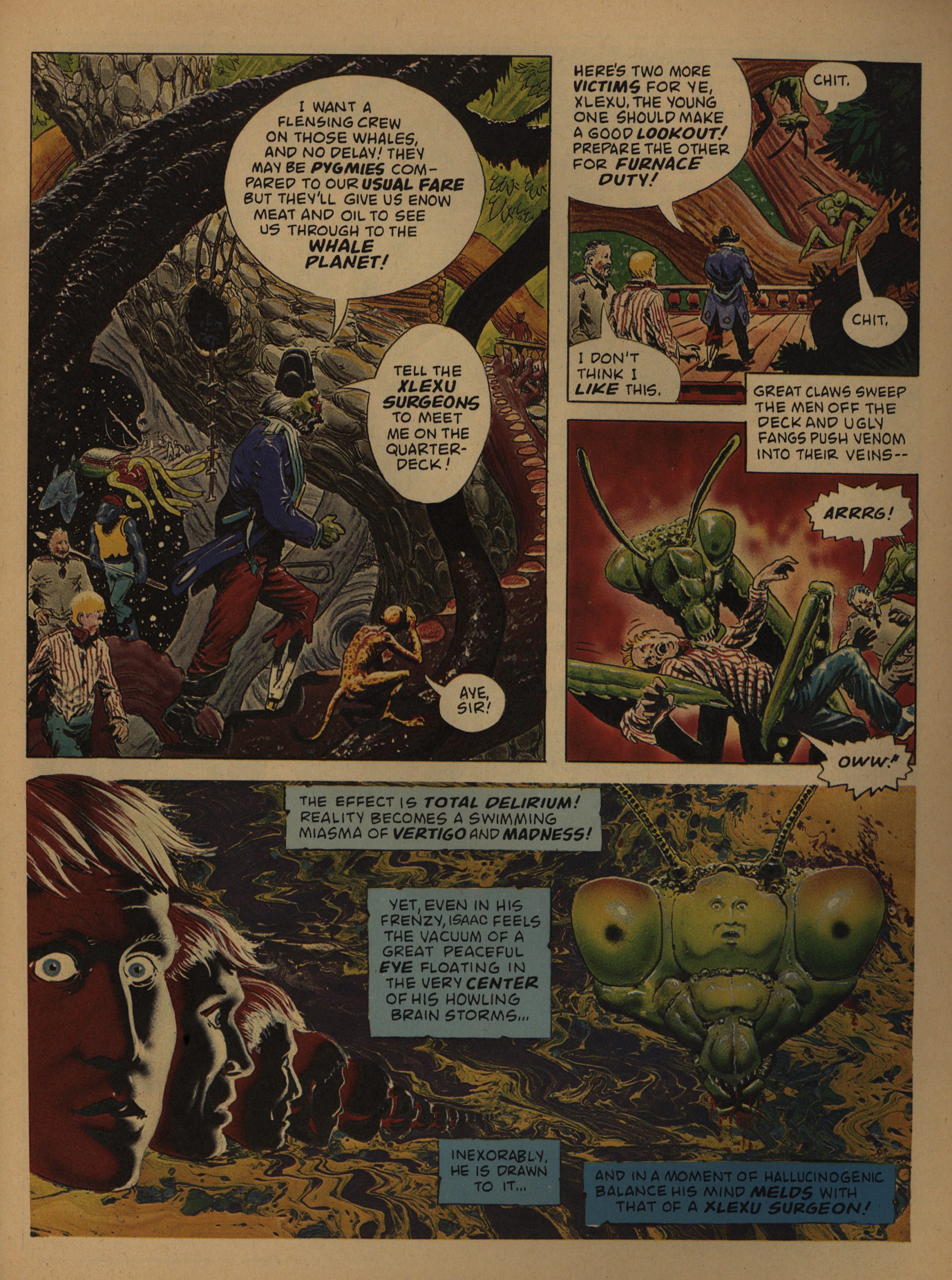 Unfortunately, for this post, I read these six magazines over almost a week-long period, so I have no idea what I was going to talk about for this page any more. I mean, it’s Rick Veitch’s grand opus Abraxas and the Earthman… which starts out in this totally bugfuck crazy manner, and then… continues in the same manner. It goes on for at least six issues (it’s not over in this batch of EI), and while… odd… it becomes steadily more engrossing as the issues pass. This Bird is an odd one out: Goodwin is pretty adamant on focusing on pieces with a strong sense of narrative, and this two-pager by Steadroy Cleghorne is more allusive, I guess. And very pretty. It’s a shame they didn’t print it on the centre pages, because having that middle panel (of the eyes) not line quite up is less than optimal. 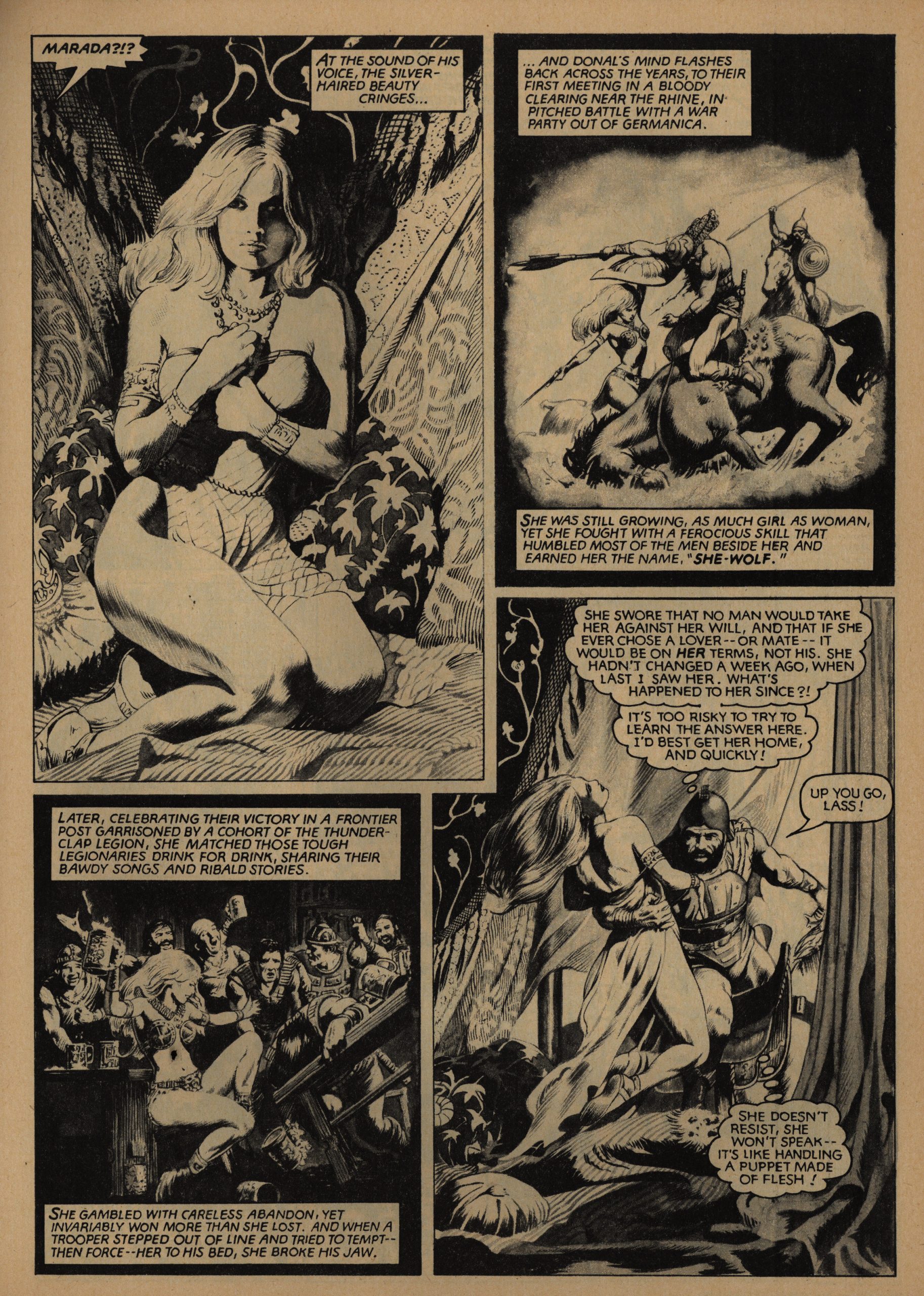 Chris Claremont and John Bolton starts their Marada the She-Wolf story, and the storytelling choices are pretty odd: We start with somebody reminiscing about how Marada used to kick ass, but now she’s all demure and stuff. I mean, it does work, but it feels like we’re being given a recap of previous stories, which made me google it:

The story was originally planned for the character of Red Sonja, Conan’s sometime partner, but had to be changed due to issues surrounding the then-in-production Red Sonja movie with Brigitte Nielsen. Claremont moved the historical milieu from the Hyborian Era to the Roman Empire, and changed her hair from red to silver

So it is, indeed, a recap of Red Sonja’s kick-assedness, but retooled to a brand new character, it’s just kinda… “hm”.

(Oh, and spoilers: It turns out that she’d been raped a lot, because that’s what happens to women who are kick-ass.) 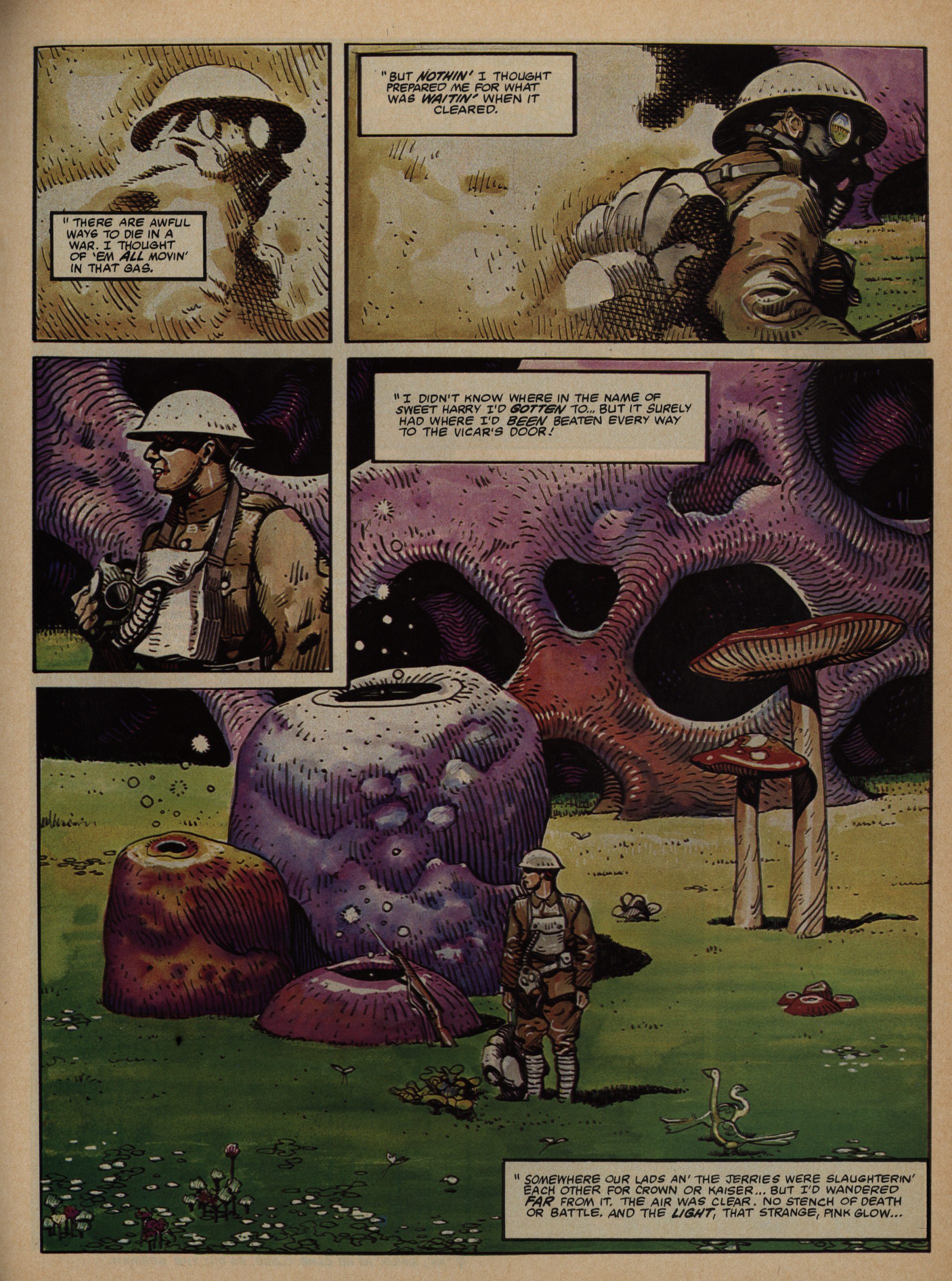 Once Goodwin had opened the door for European artists to do stuff in EI, I had expected the floodgates to open and we’d get a bunch of people in. But, no; Goodwin sticks to just a couple of people and they appear regularly in EI. Here’s Pepe Moreno, and he’s fine. And I guess it does make sense to do it this way? It’s less random. 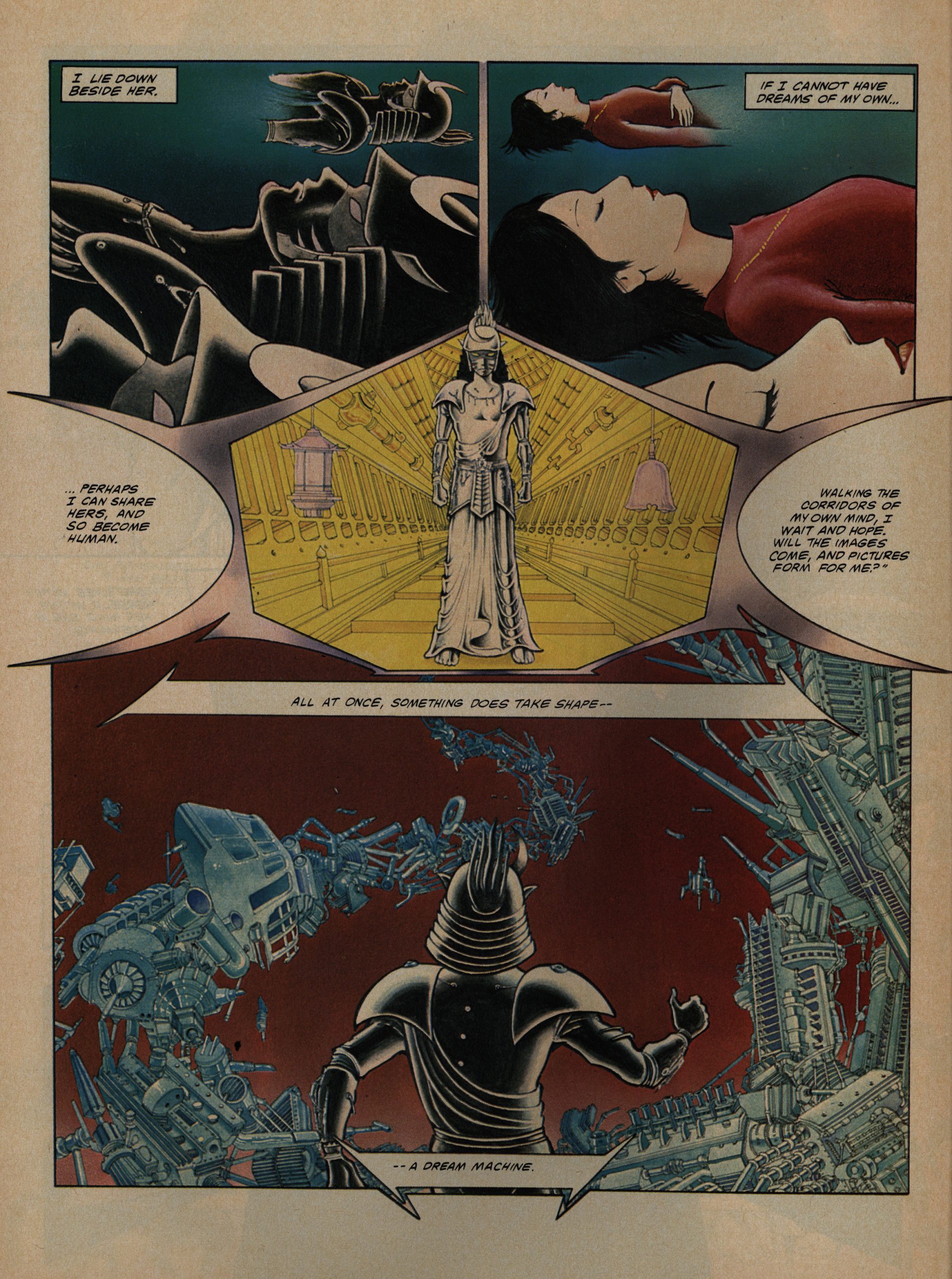 But we do get random stuff, too, like this short piece by Kaze Shinobu, which has to be one of the first Japanese comics published in translation in the US. (I mean, probably not the first first, but perhaps among the first half dozen? I could google it.) 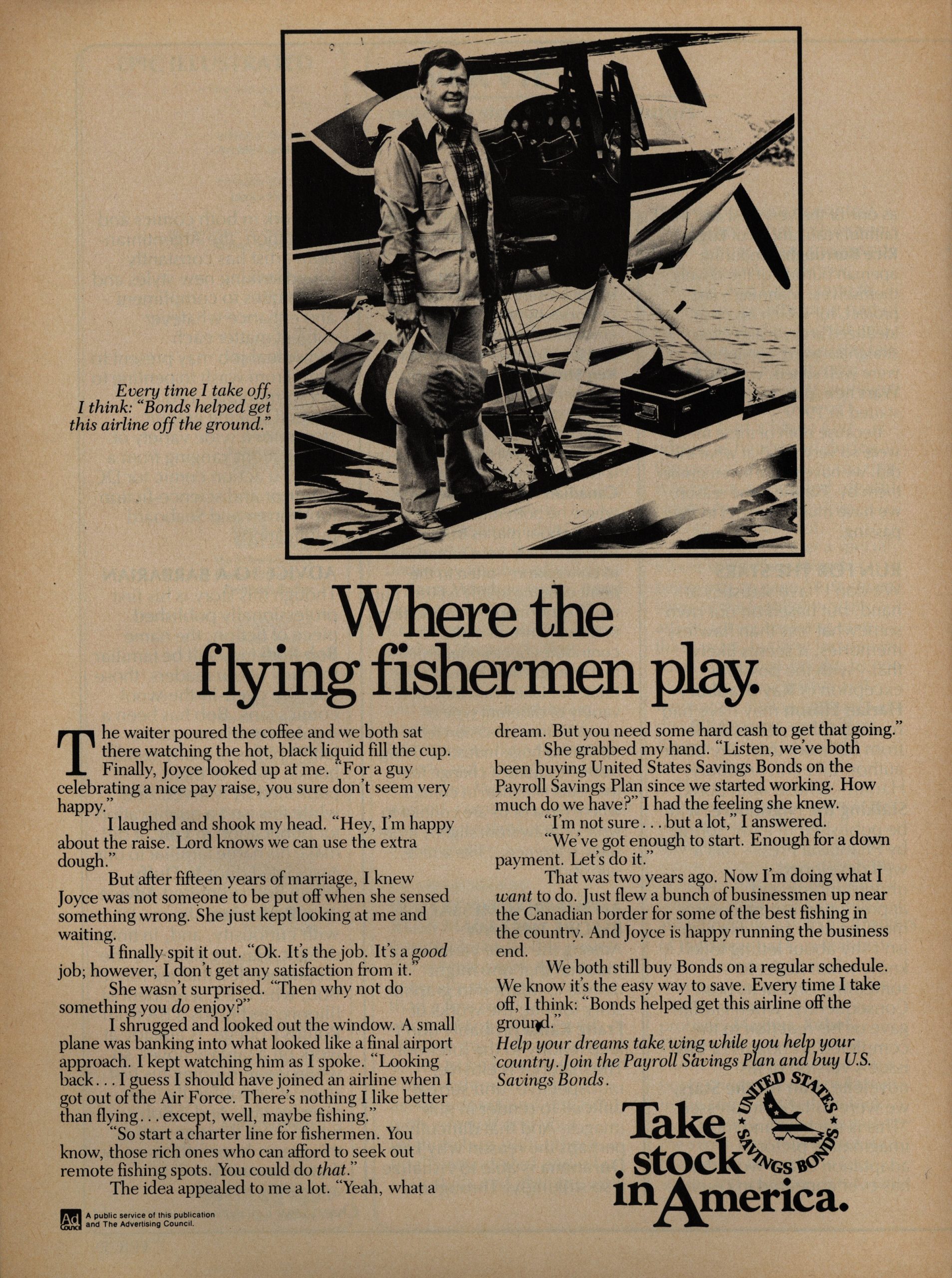 I continue to enjoy these Ken Steacy adaptations of Harlan Ellison stories – a lot more than I enjoy Ellison on his own, really. Of course Steacy’s colour work here is outstanding, but there’s also something really enjoyable about looking at his slightly odd people. If your reaction to this page (Abraxas and Rick Veitch) is “whaaaa”, then: Good. This is what the serial is like. 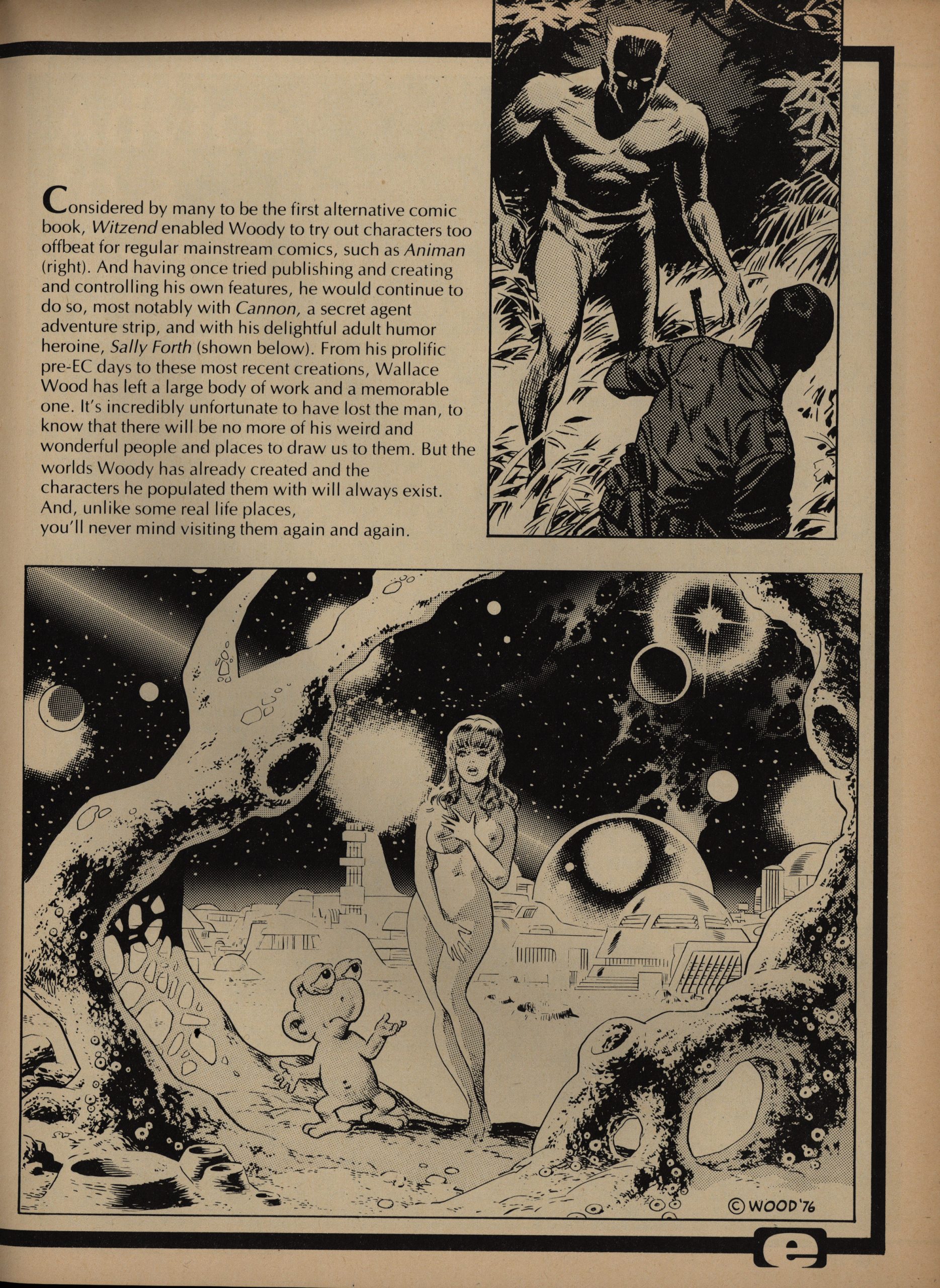 Wally Wood dies, so they do a little retrospective on him. It’s nice, but it feels like they could have gone more in-depth and at least published a story or two by him while they were at it. 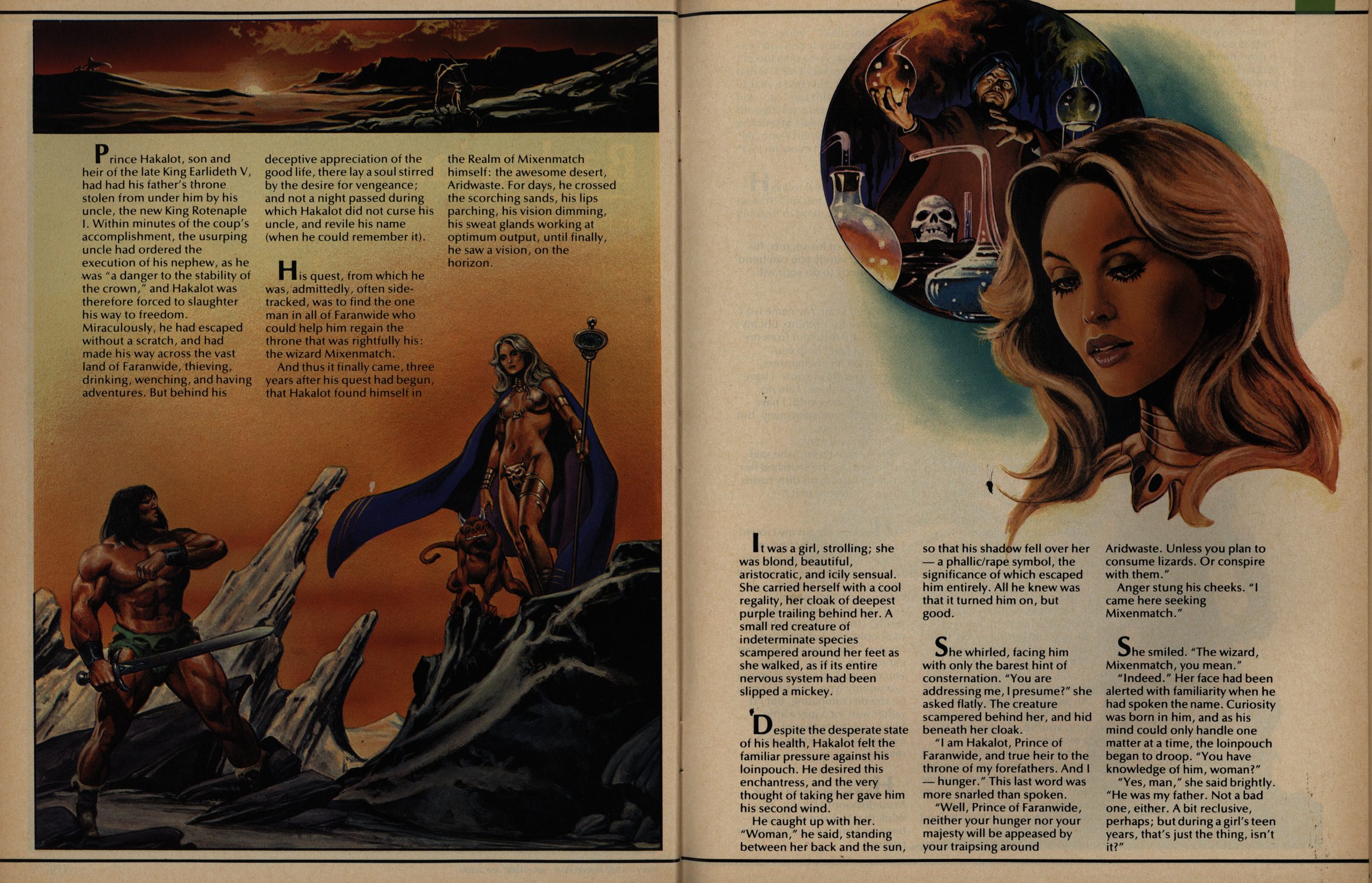 Robert Rodi/Joe Jusko do a glorious parody of barbarian tropes. I mean, “Prince Hakalot” isn’t the height of comedy, but in the context of Epic Illustrated, it feels like a savage burn, somehow. Oh, and the phallic symbolism.

Did I mention Weirdworld in an earlier post? These panels befuddled me until I realised that it was like a measure of how evil this character had gotten now. (It gets filled up with darkness.) Either that’s clever or it’s… not. 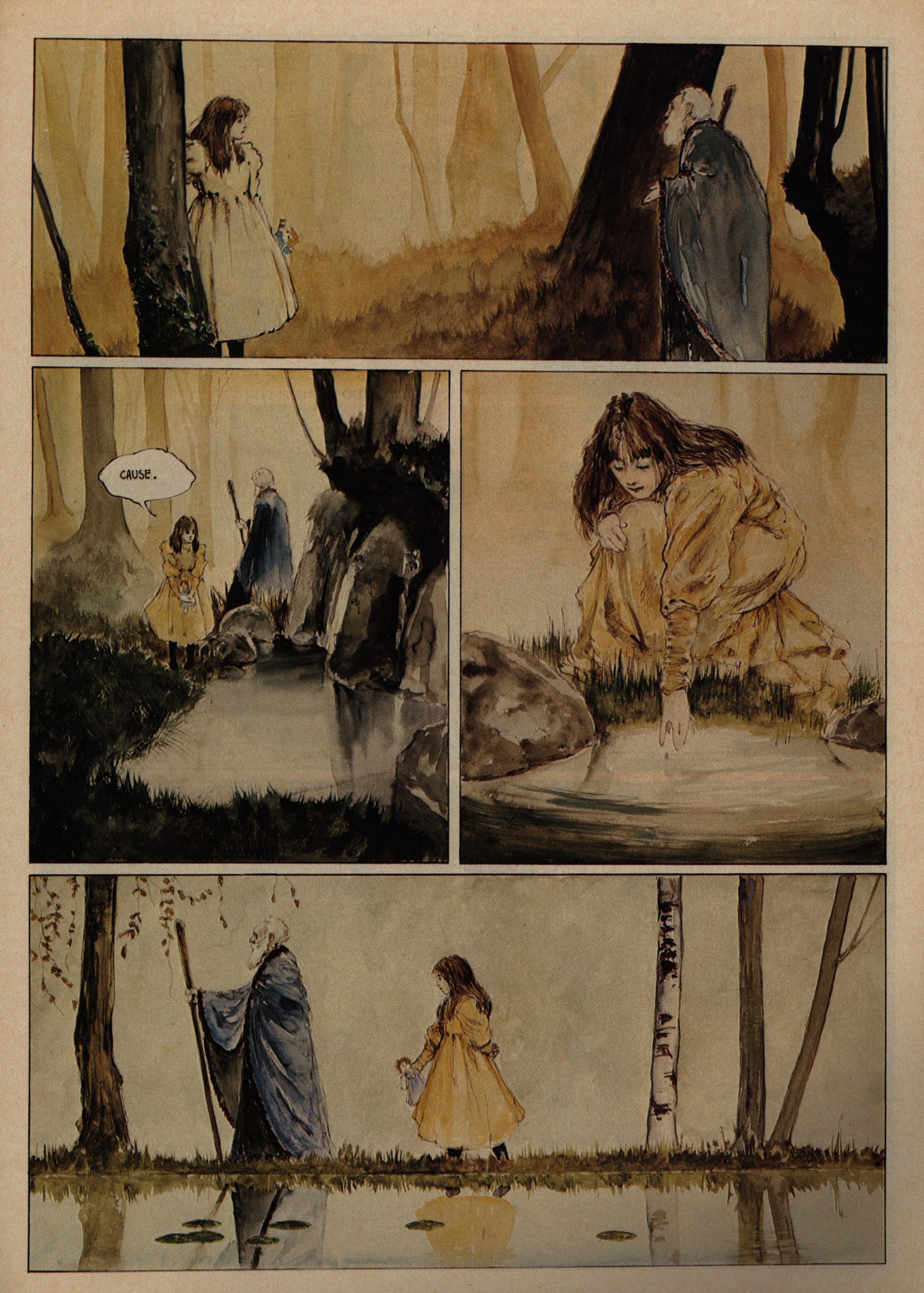 Claremont was pretty unique back in those days in putting so many female characters on the page at the same time. Here’s a page where *gasp* there’s only female characters that are talking, and they’re not talking about *gasp* men! It cannot be!

(The story was pretty standard, though.) At random, we get a long article about Basil Wolverton, and then a reprinted Spacehawk story. I like it, but it does sort of move away from the presumed target audience (people who like Heavy Metal) to a different one: Old people. As if to drive that point home, a few pages later we get a Ralph Reese pastiche of 50s Mad. It’s well-drawn and paced, but it’s… Mad. 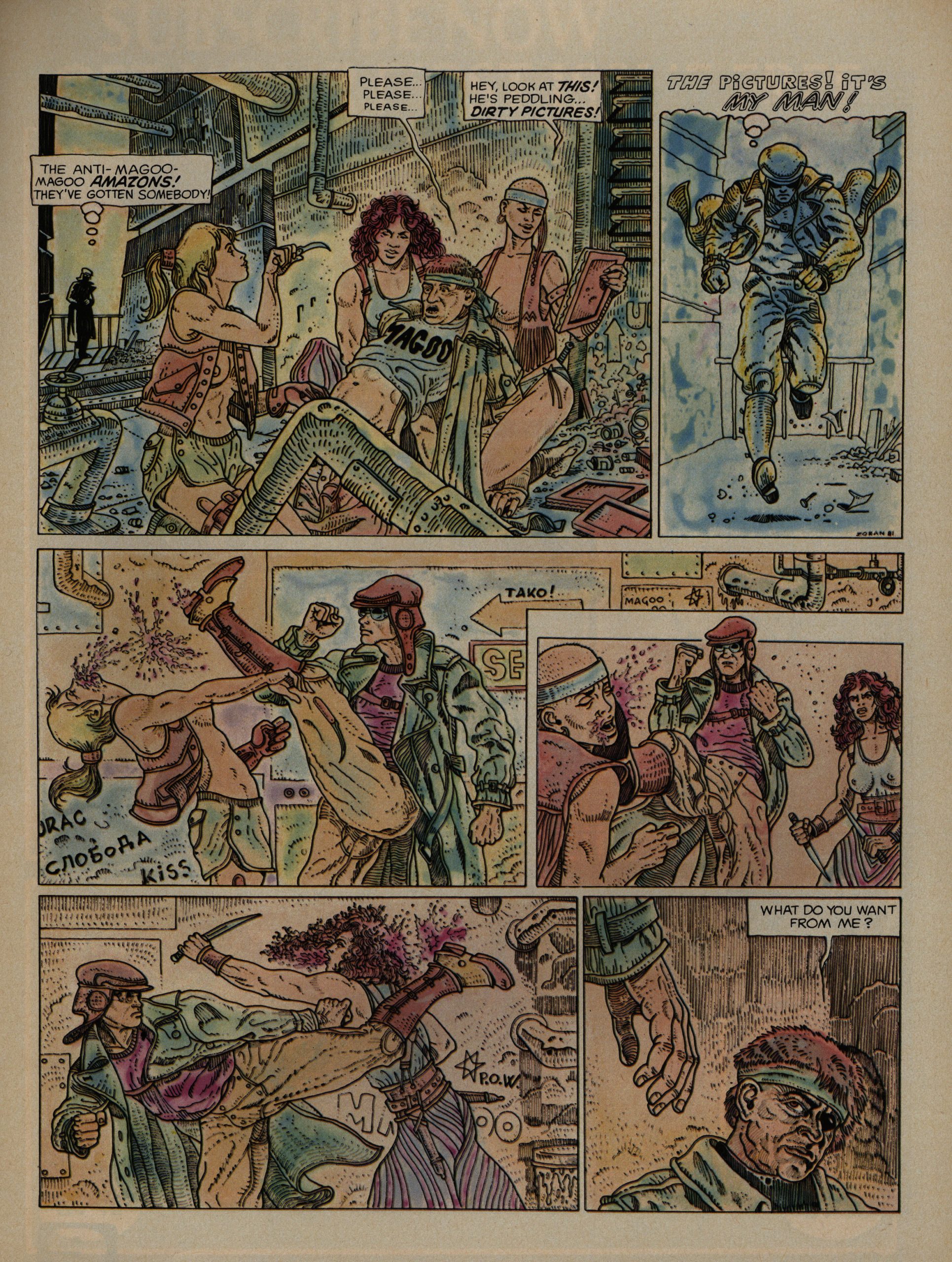 Oh, wow. James Romberger? I wasn’t aware that he was doing stuff back then (I became aware of him when Uncivilized started publishing him, and I read his Kirby thing just the other week). And I certainly wouldn’t have guessed that he did stuff like this. He’s such a chameleon. Then: A preview for the Marvel adaptation of Blade Runner. 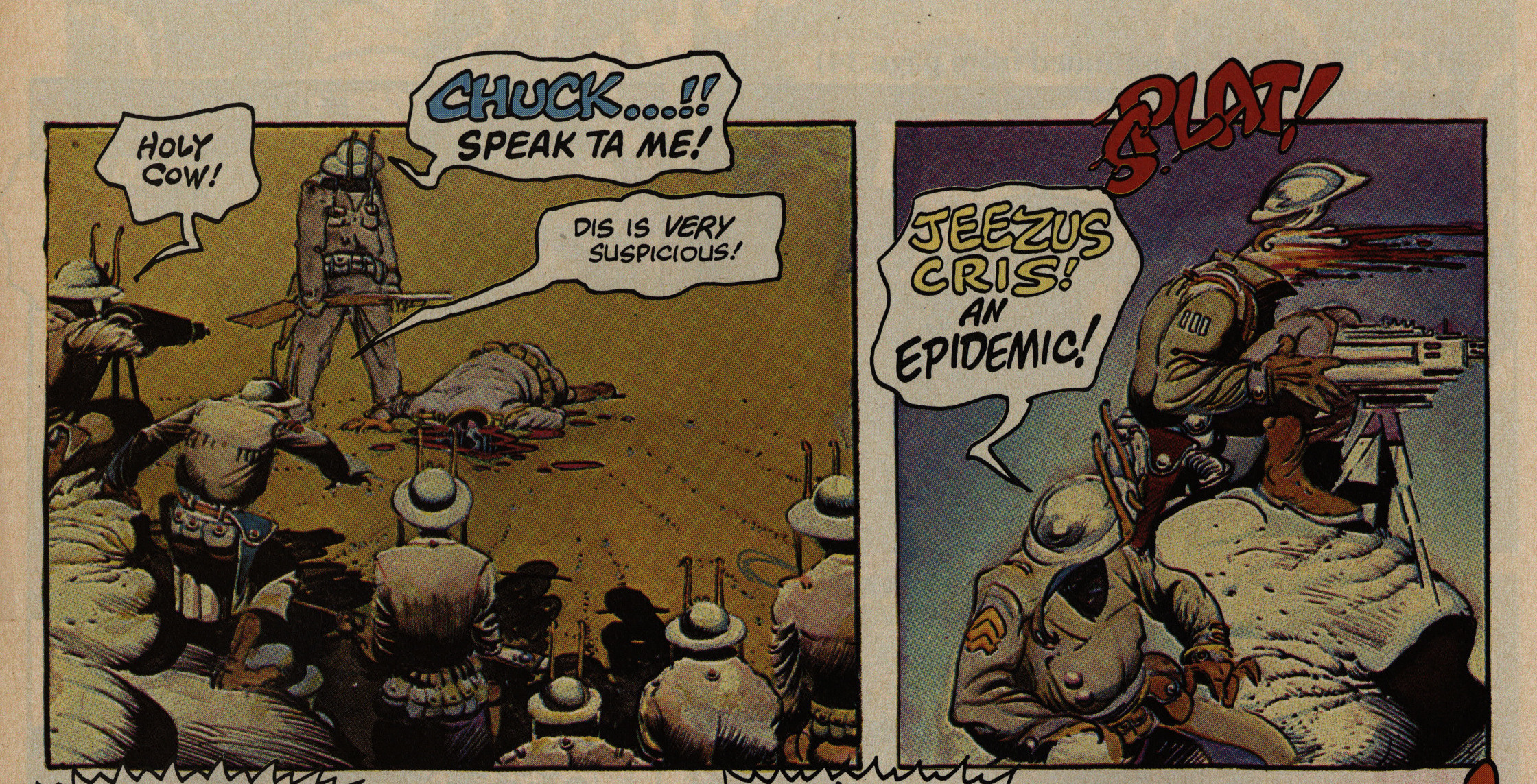 Arthur Suydam is something else. I love looking at is pages, and I feel that I should appreciate his stories more than I do, because they have stuff like the above, which is just plain silly. And I like silly. But perhaps because they lean into non-sense so heavily it’s hard to become invested? 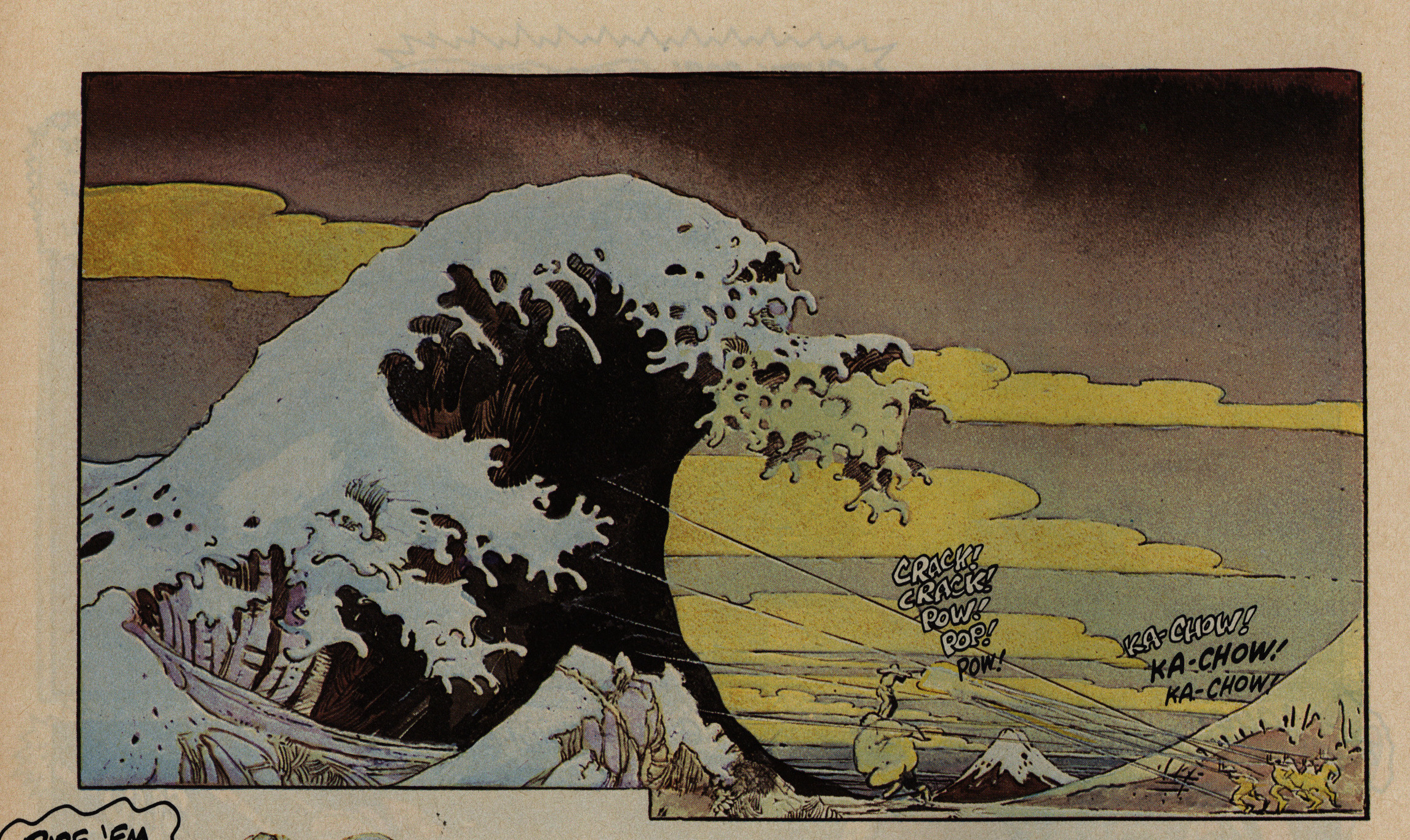 I think I raised the issue of EI having too many short bits earlier on this blog? And that was a problem because it just made the texture of the magazine a bit choppy? Apparently Goodwin thought so too, because he’s going to start doing longer, complete-in-on-issue stuff. 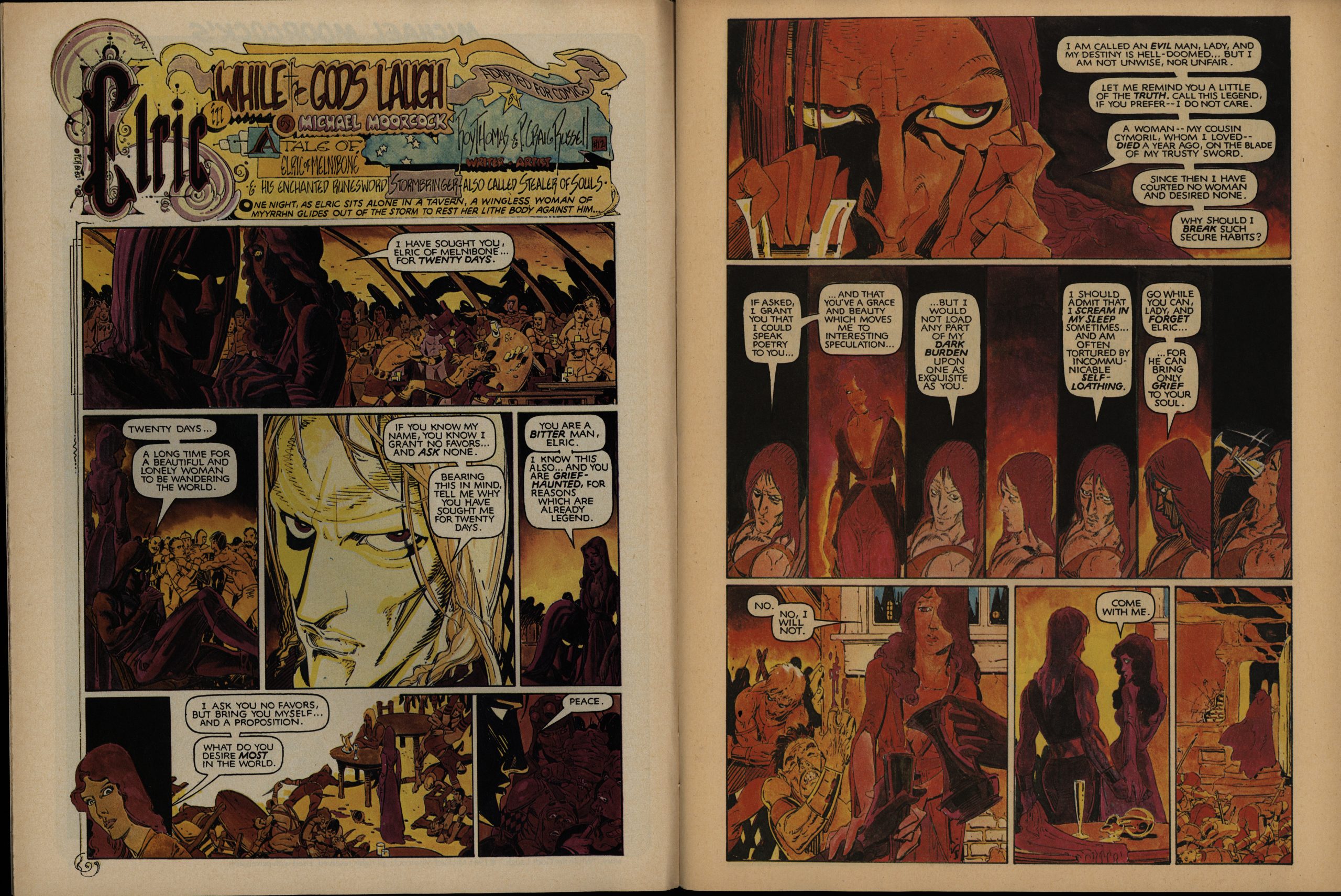 So we get the entire While The Gods Laugh story, at (if I count correctly) 28 pages. And it does really help, I think. It’s a gorgeously drawn story, of course, because P. Craig Russell. And it’s a fun story. One thing that is a let-down, though, is that it’s printed both on shiny coated stock and matte paper, so you get these abrupt changes in what the colouring looks like. I presume that Russell didn’t know what pages were going to be printed on what stock, so he couldn’t adjust his colouring. 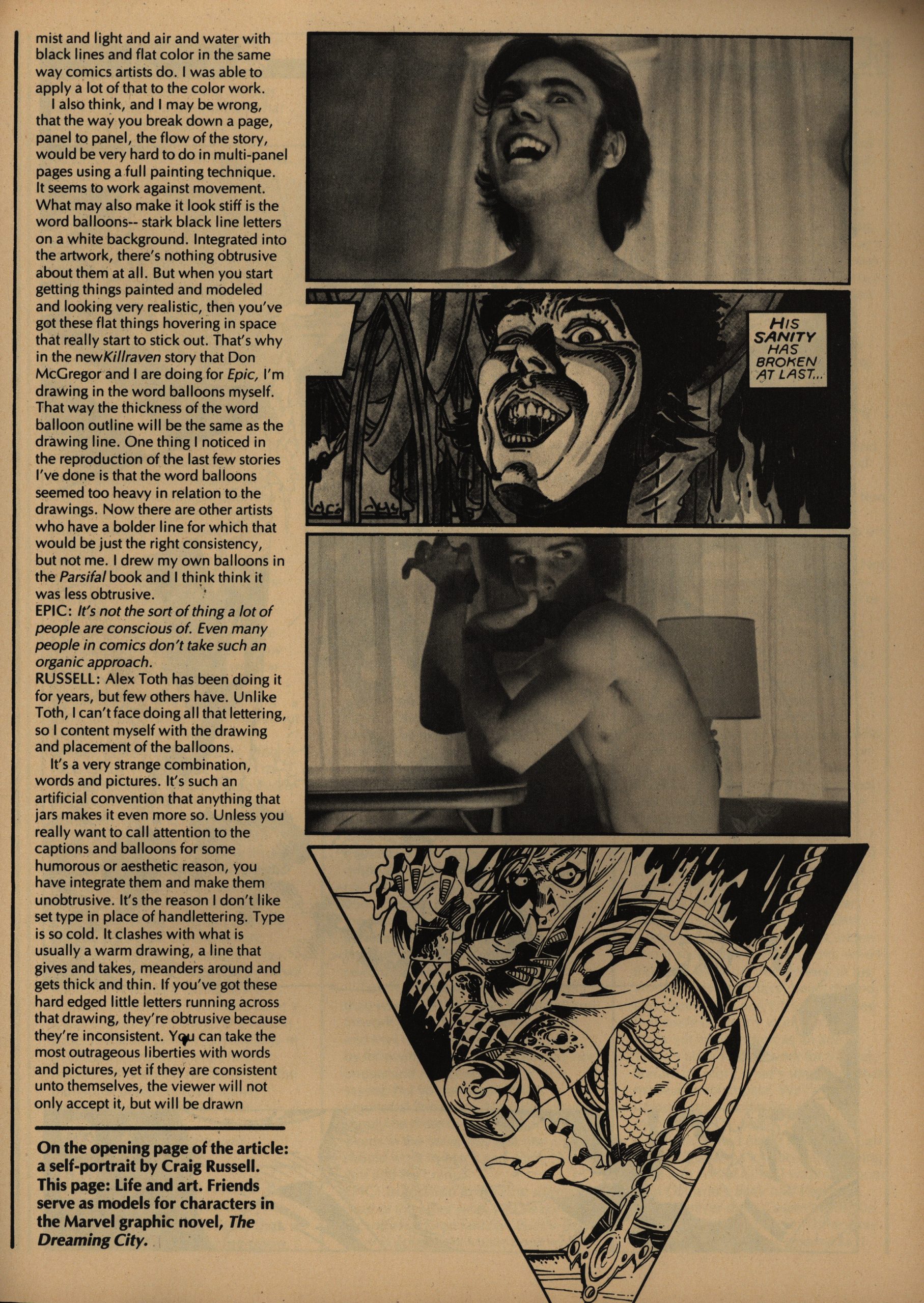 To go with the long Elric story, we also get an interesting interview with Russell and a look at his process (which is very much based on taking pictures of his friends).

We also get a look at some adjustments he mad in the artwork. Here’s the printed panel:

And here’s what he originally had:

So: Goodwin is making editorial strides, issue by issue. The concept of EI doesn’t change much, but he’s getting better at putting together an interesting package for each issue as time progresses.

Ah, somebody is doing a restoration of this story. I don’t know whether Titan has published it yet: I bought a bunch of Titan Elric volumes earlier this year, and the reproduction there sucked. It looked like they were shot off of the printed comics. 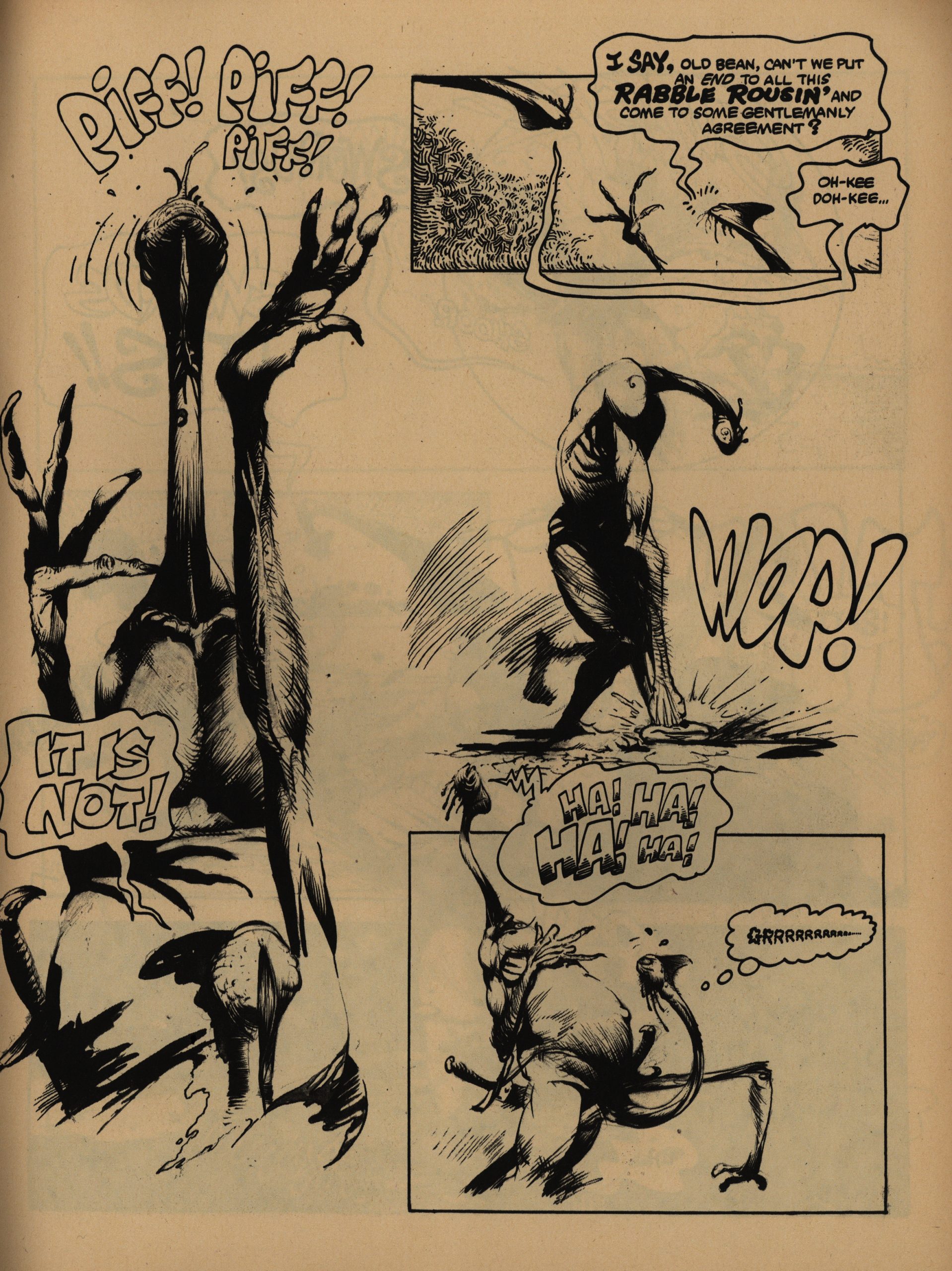 Oh! I never realised how much Sam Kieth must have been inspired by Arthur Suydam before, because I don’t think I’ve seen Suydam doing black-and-white stiff before. But that’s basically the Outback in Maxx, right? Goodwin said he kept this Bob Aull piece in the inventory for a while, and you can see why: It’s more undergroundy than perhaps really fits the magazine. And so political (it’s called “The Patriot”), and as Goodwin said, it had become more timely again in 1982. 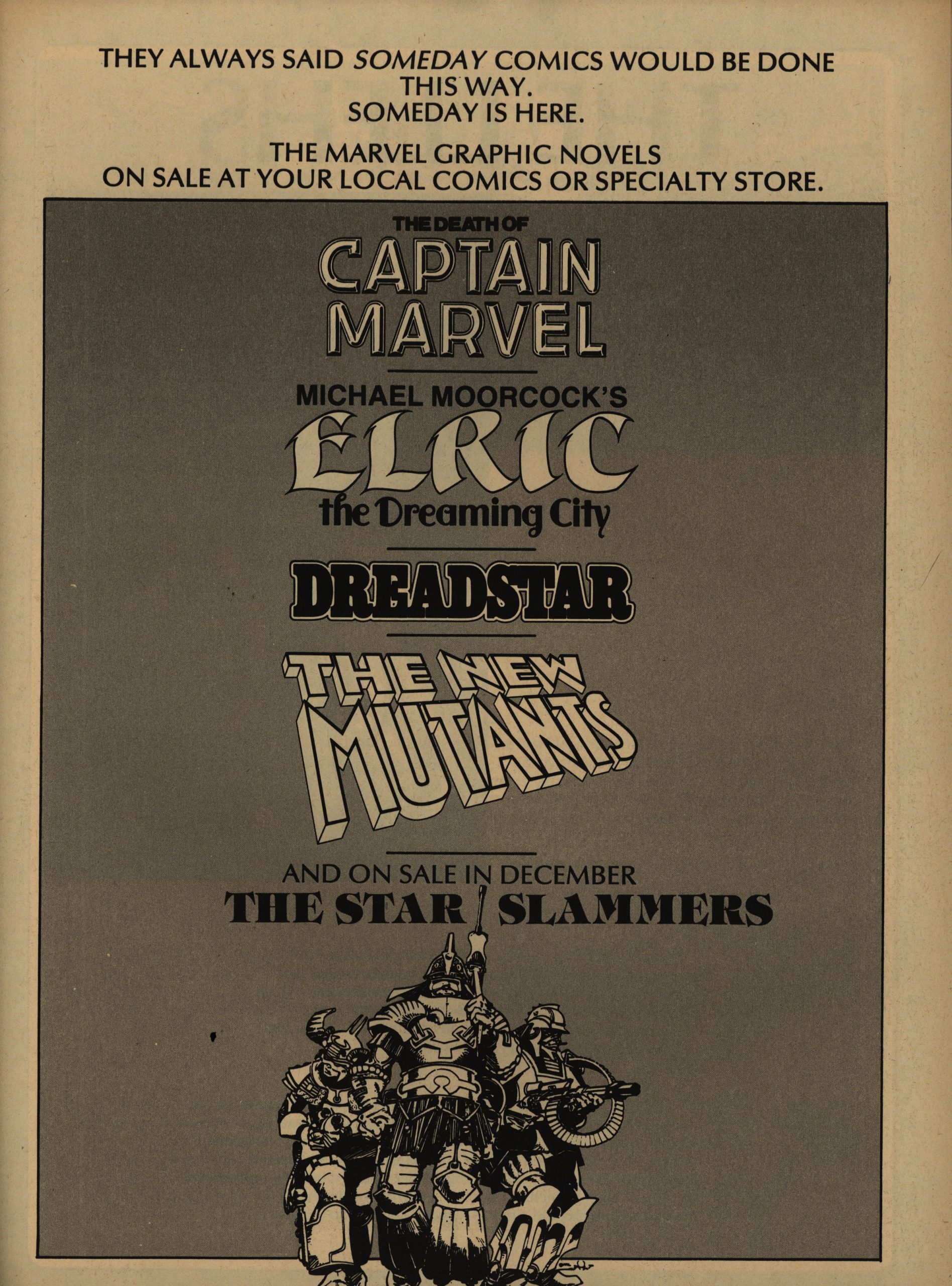 Well, that’s an ad for Marvel Graphics Novels, I guess, but not a very… imposing one. 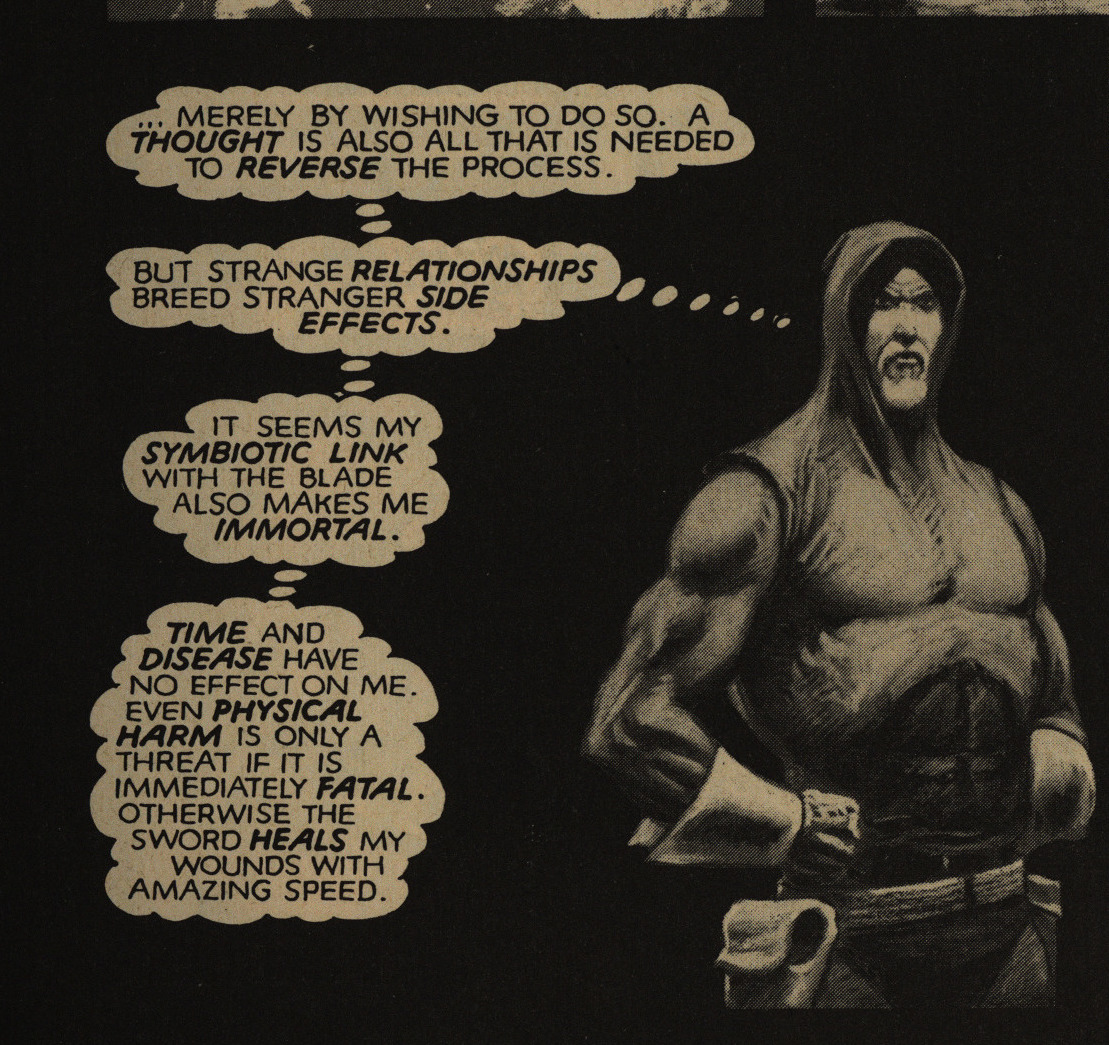 Starlin does a short Dreadstar story to tie us over to the new Dreadstar Epic Comics series, and he doesn’t do the “as you know, Bob” plot recap thing: Instead he does “I must now think to myself about my origin story” thing. For pages. But yes! Epic Comics! The subject of this blog! Soon! It’s happening!

Dreadstar is announced as the first series, and then Coyote. I’m really looking forward to re-reading Coyote: I remember reading it back as a teenager, but then I stopped half-way through. I guess we’ll find out whether it sucks or not. Oh, wow. Jeremy Brood by the inimitable Richard Corben (and written by Jan Strnad). I thought I had all their stuff? But I missed this one?

The story is weird: It doesn’t really get going, and then it stops. But no “to be continued”. Hm… Oh! The contents page says this is a preview of an upcoming graphic novel! I’ll guess I’ll but that then.

Jeremy Brood: Relativity (1982) was originally intended to be the first of a three-part series of sci-fi graphic novels by Richard Corben and Jan Strnad, but disappointing sales lead to its early conclusion. A single, second installment was published as a comic book, “Fantagor Presents Brood” (1983). Later, the two parts were collected into one volume, entitled “Jeremy Brood” (1989).

Perhaps sales would have been helped if Epic Illustrated had actually said something like “Read the complete story in the graphic novel soon to be published by Fantagor” or something near the story itself? Just mentioning that it’s a preview on the contents page is less than optimal.