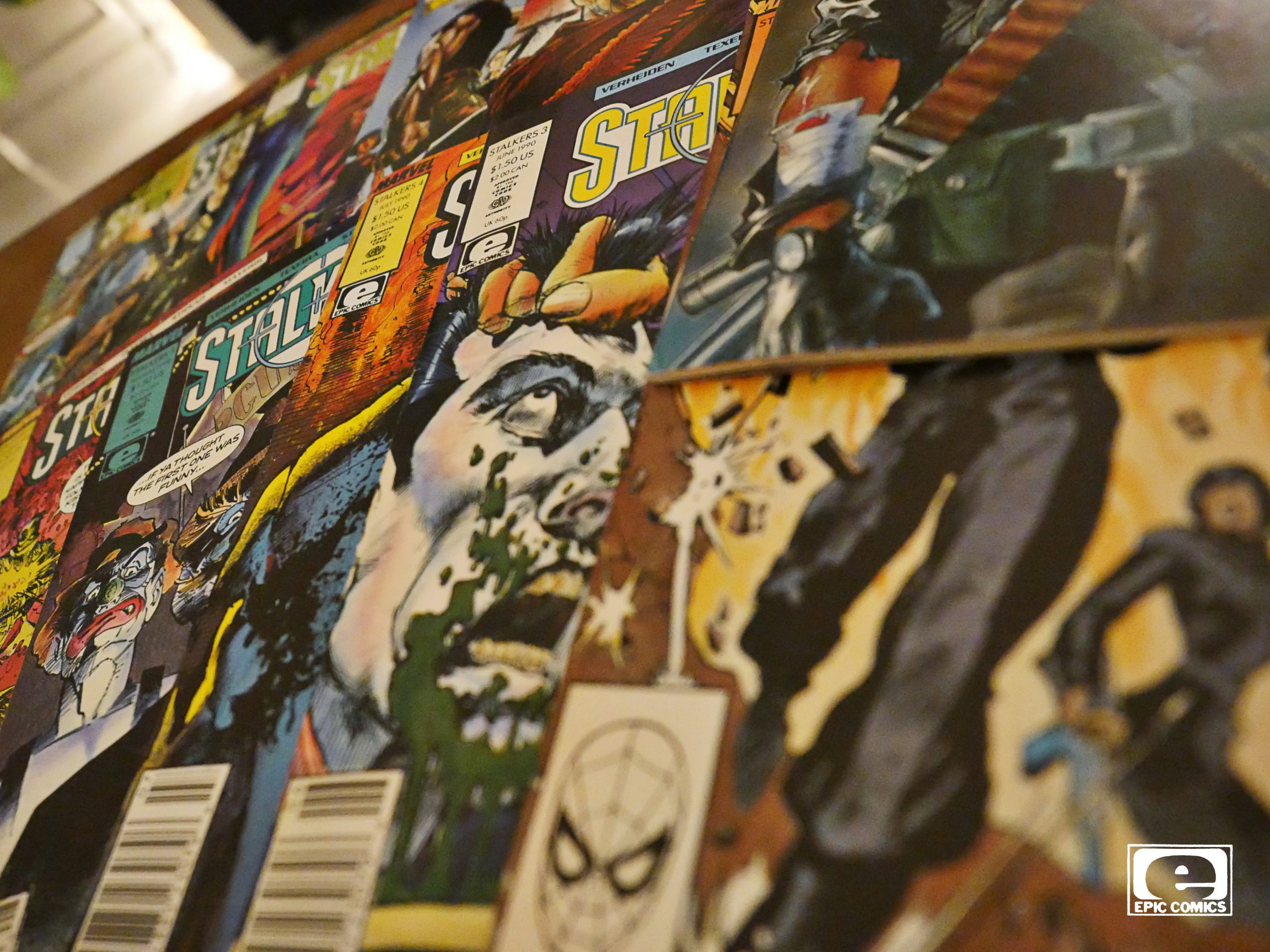 This is a newsstand-distributed Epic series, which was slightly unusual: Most of them went to the direct market only, but I guess the premise here looked like it could have some success on the newsstand. But this means that this is printed on newsprint, and that it has a Comics Code “seal of authority” on the cover. 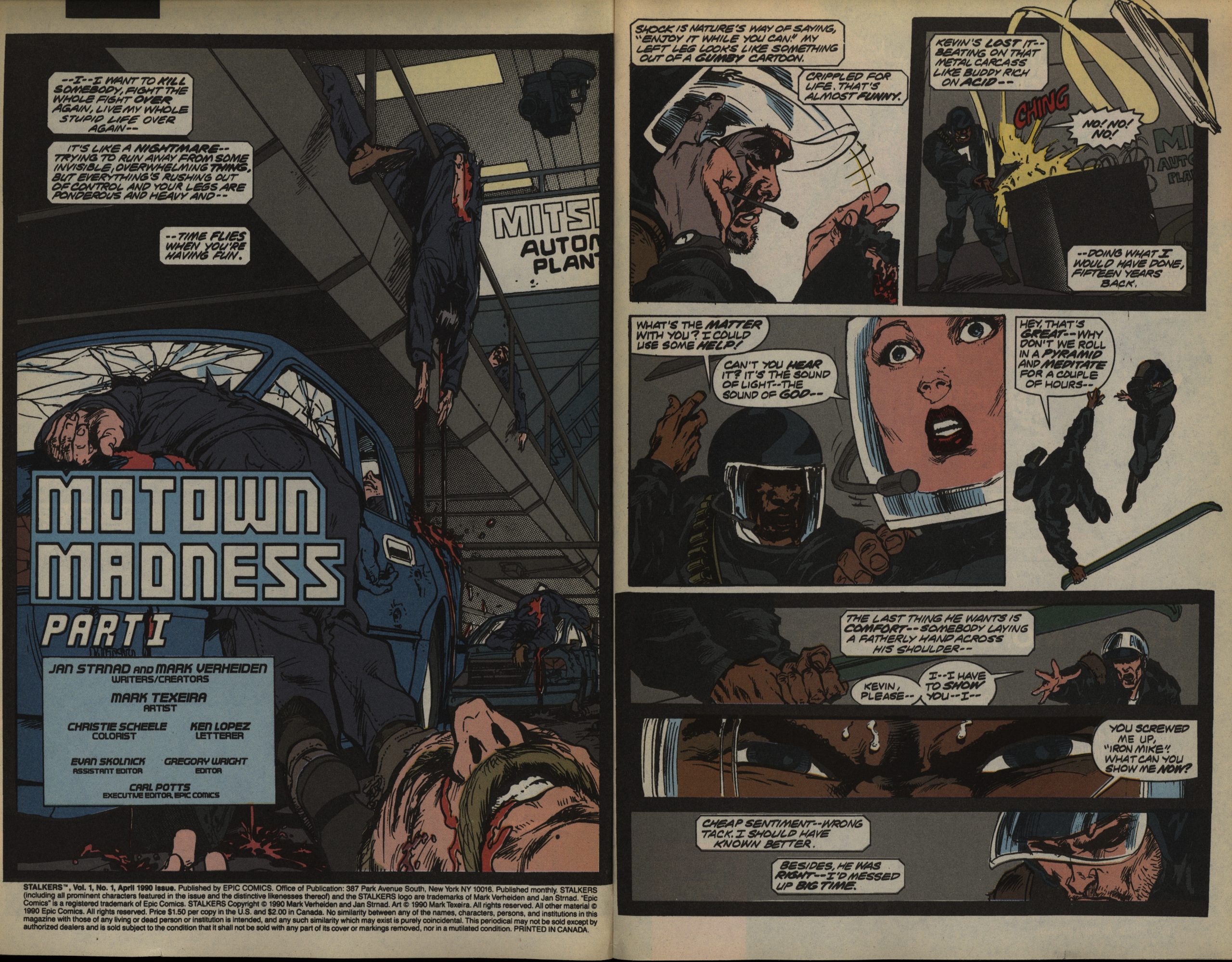 The first issue drops us right into the action, and there’s a lot going on. That’s how to do a new series: First show us that it’s going to be fun, and then, perhaps later give us some backstory. If ever. 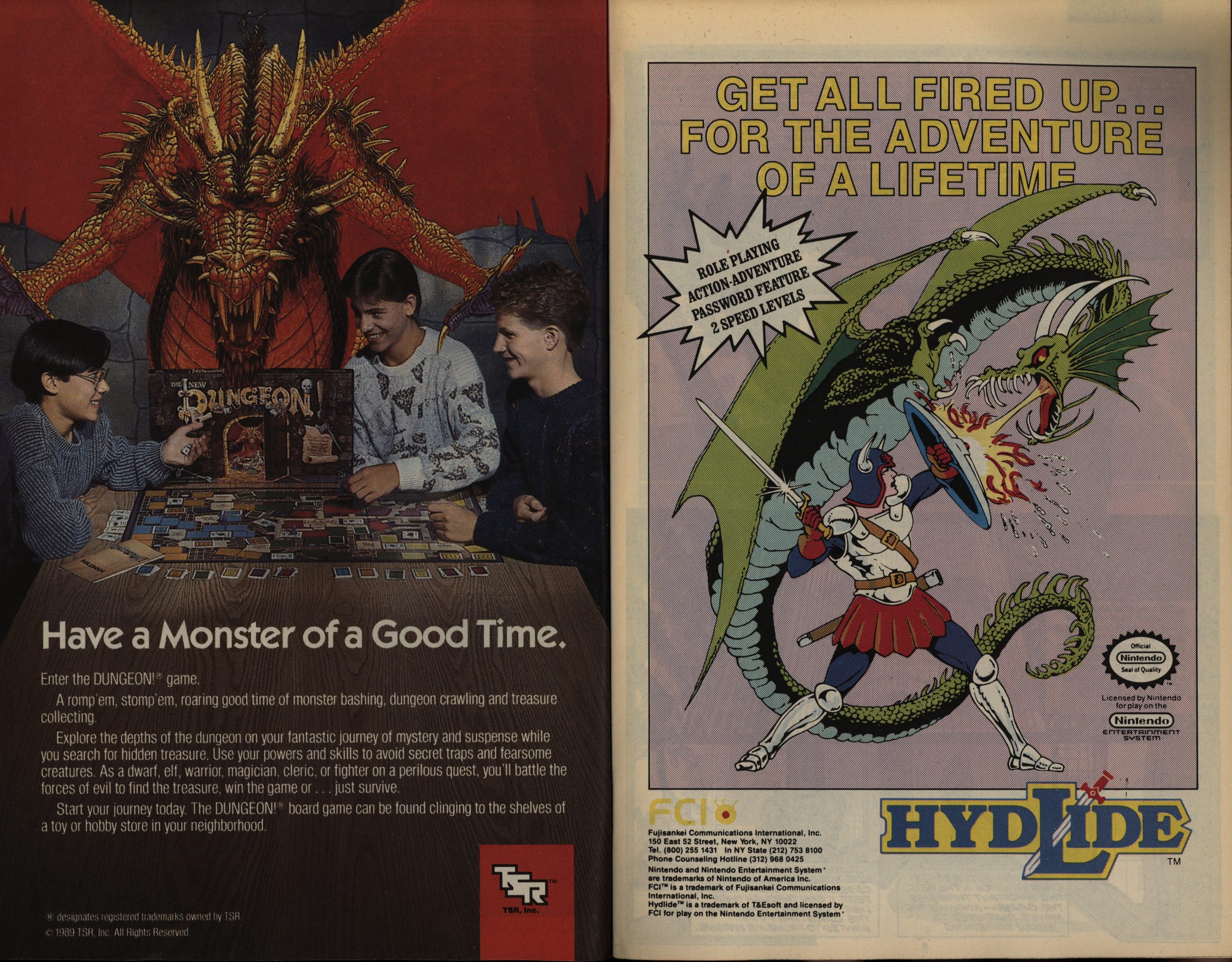 Oh, right: This is a newsstand book, so it has All The Ads. There’s only ~19 story pages per issue; the rest is ads and Stan’s Soapbox and stuff. And I think it’s slightly incongruous seeing ads like these in a book that’s all about killing terrorists and stuff, but whatevs. 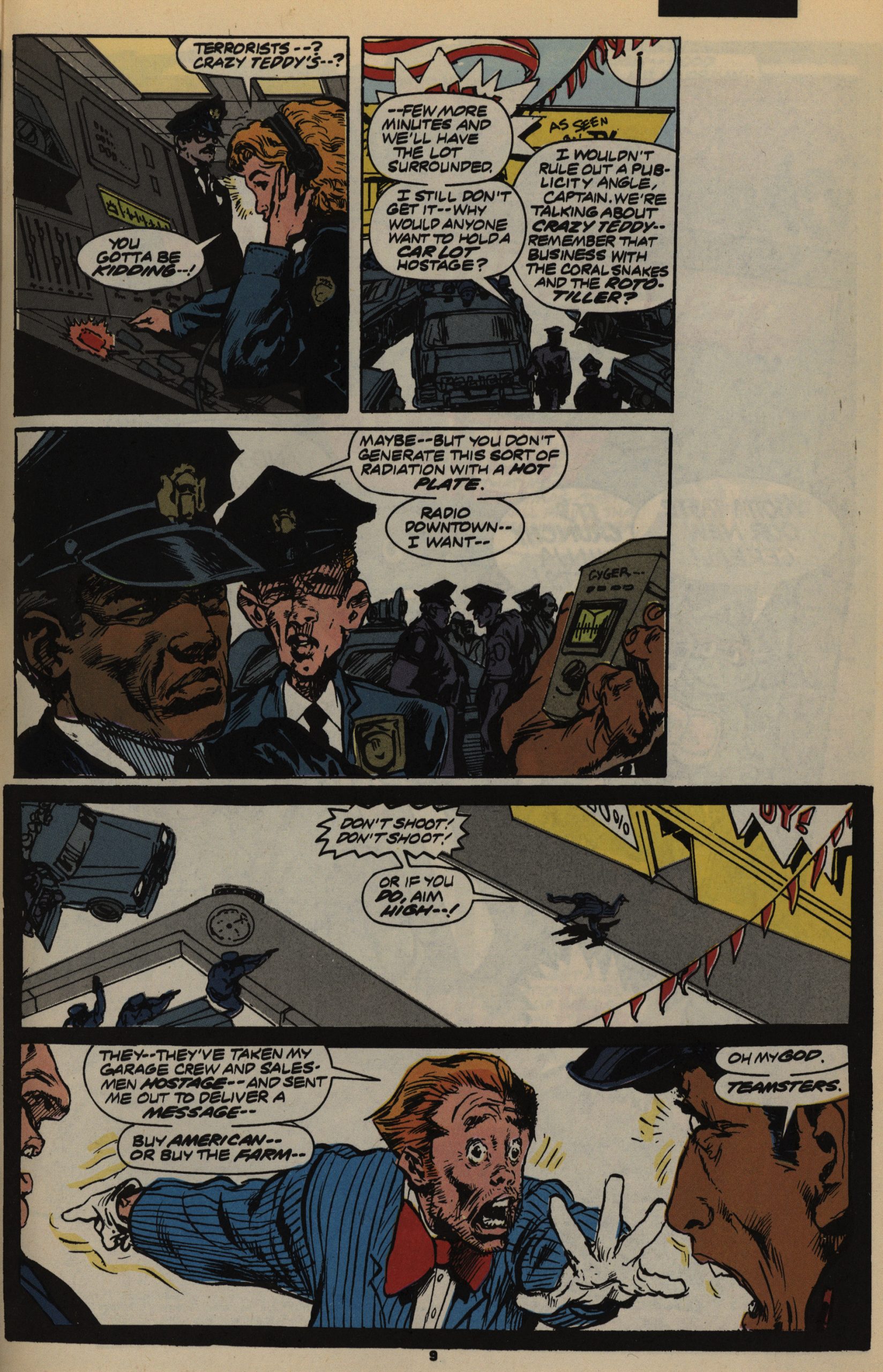 This is an action book, but it’s got plenty of tongue-in-cheek (I didn’t say who’s cheeks) humour in here. “Oh my god… Teamsters.” 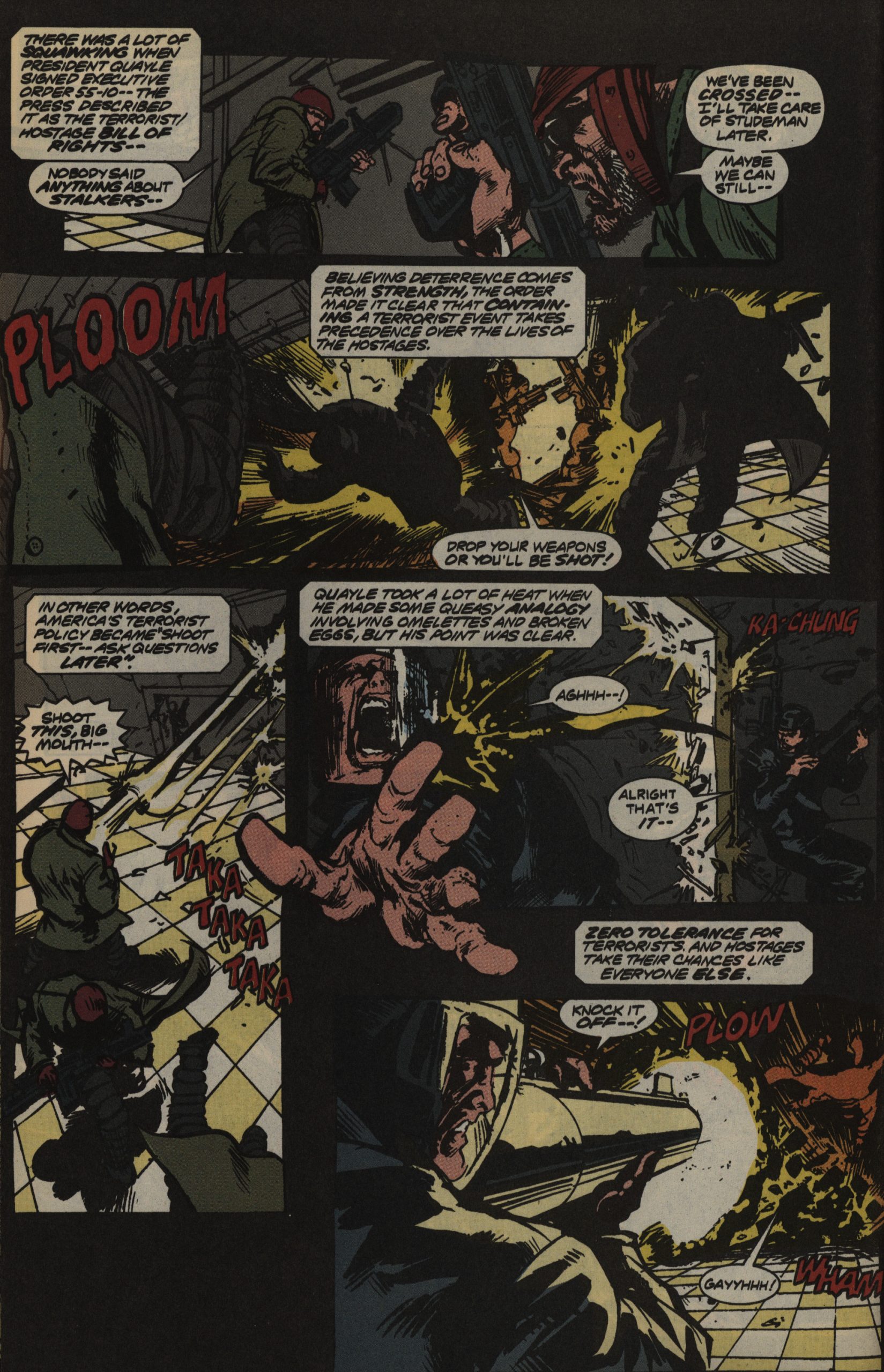 The writing initially starts off very modern, with different voices and chaos and stuff, but it seems to have arrived at the language it uses more by accident by design. So there’s a lot of inconsistencies: We get a bunch of first person narration, but then we shift to third person, and then to omniscient narrator for a page or two, and then there’s the bit where we get second person present tense for three pages. It feels a bit haphazard. Or perhaps they were just having fun. 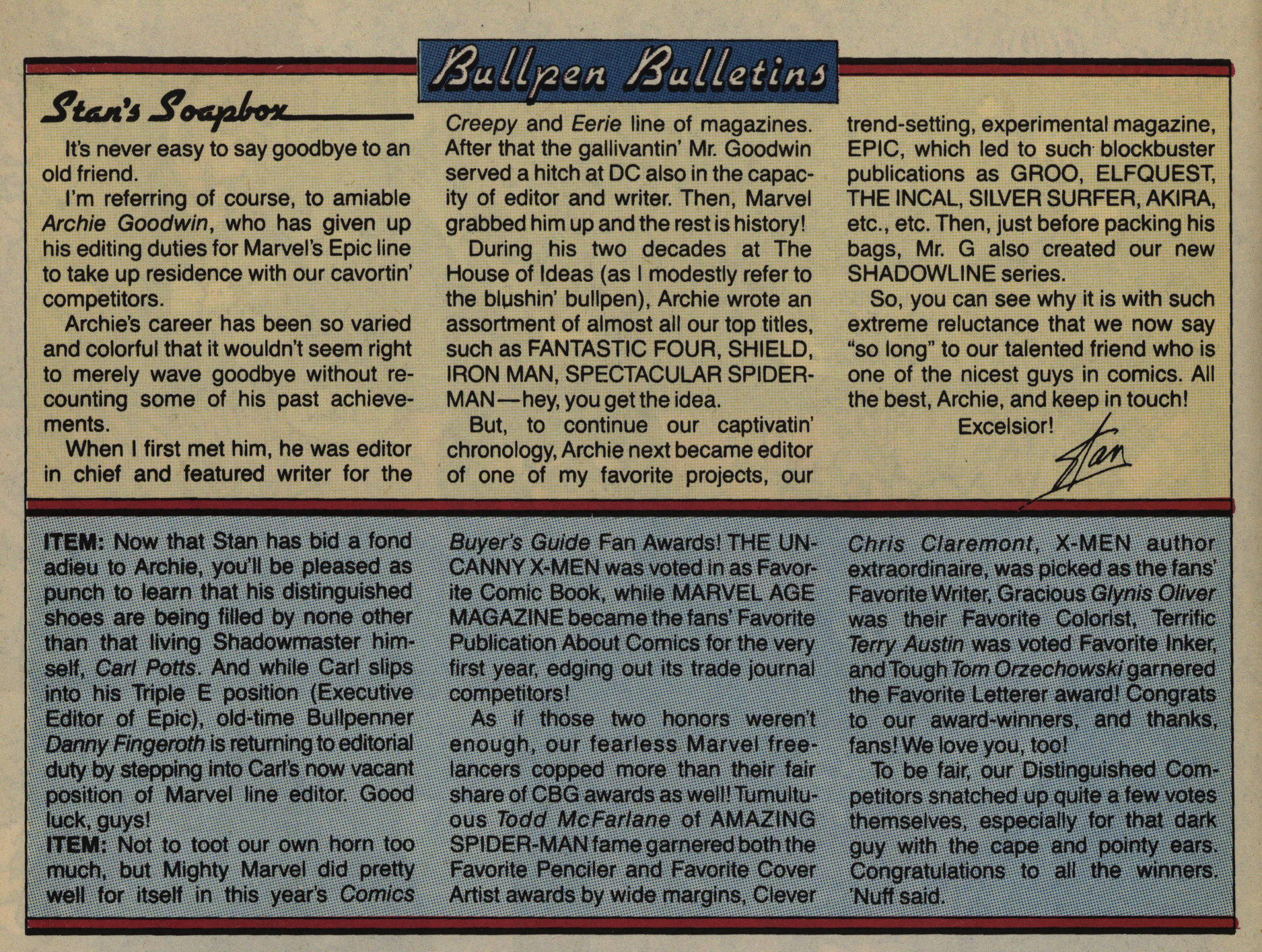 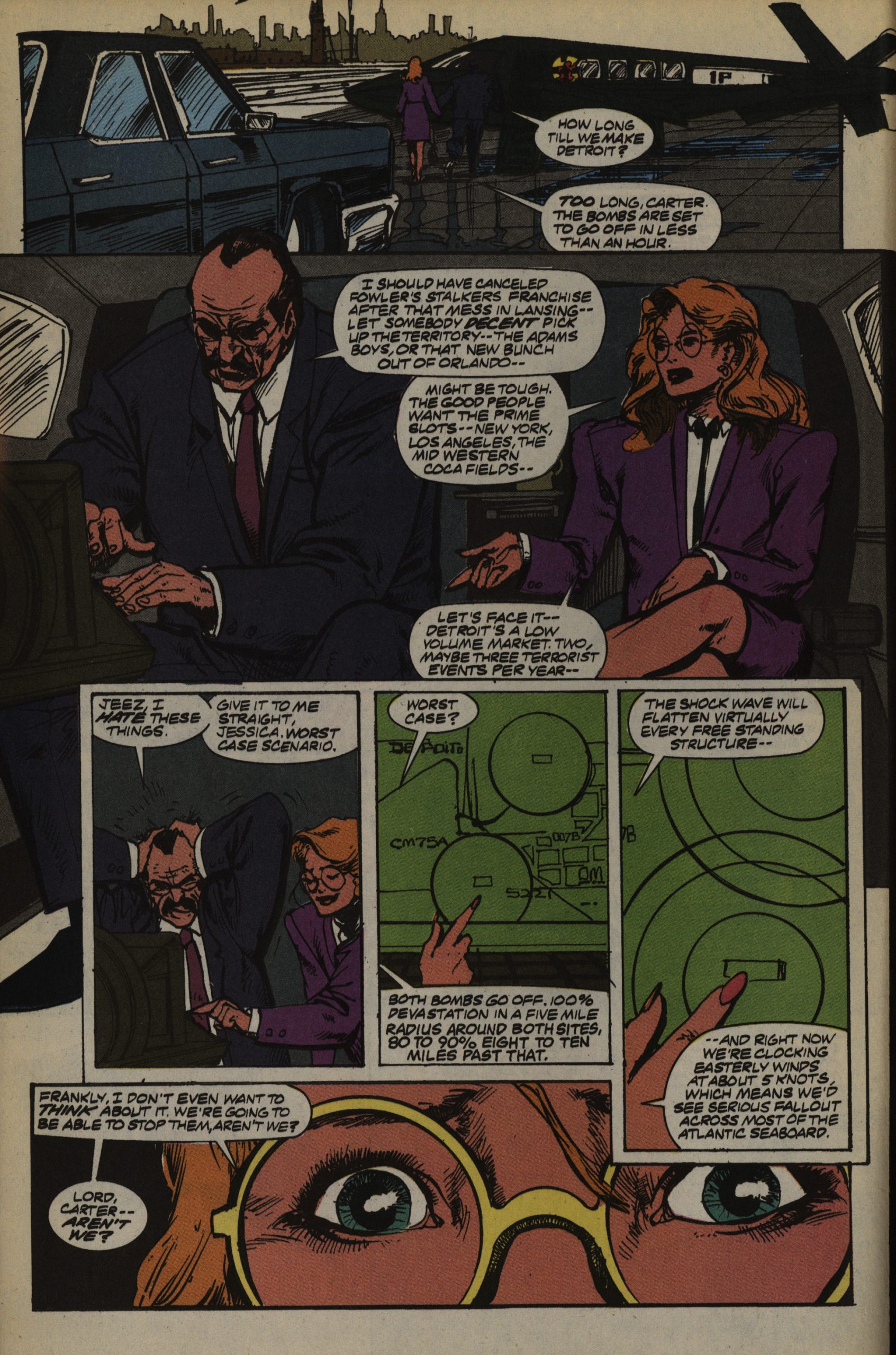 The stakes are pretty high in the first two issues: We have terrorist teamsters threatening to blow up Detroit (because of Japanese cars) with nuclear bombs. And there’s the privately owned (and franchised) security organisations Stalkers, Inc, trying to stop that from happening. Meanwhile one of the Stalkers is reconnecting with his ex-girlfriend, and it turns out that he has a son (who’s also a Stalker) and it’s all very tense and 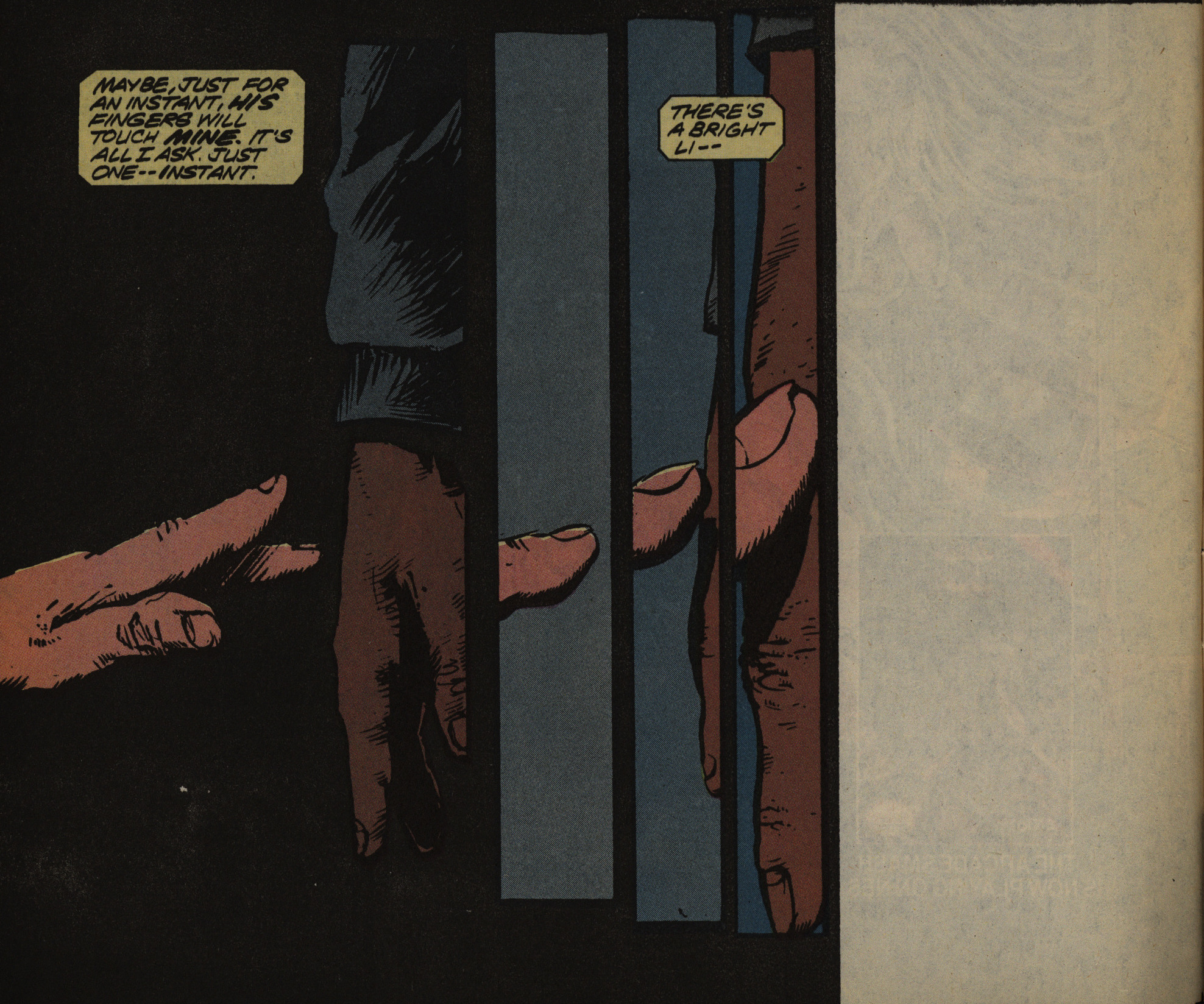 Then Detroit is blown up and everybody we’d come to know over the first two issues dies.

Well, that’s one way to start a new series!

So the next issue, it’s a brand new cast of characters. The plot continues on, though, with the other Stalker franchises being employed to track down the other nuclear arms. I think. Things sometimes get a bit vague.

The next half-dozen issues also have a pretty strange structure: There’s basically two concurrent Stalkers serials running in each issue, with about nine pages worth of each. One serial is by Verheiden and Texeira, while the other is by Strnad and Val Mayerik. The serials don’t really affect each other much.

I guess this is a way to cut down on the work needed from each artist on a monthly comic, but it sure is odd. It also means that they pack a lot of story into each nine page chapter. 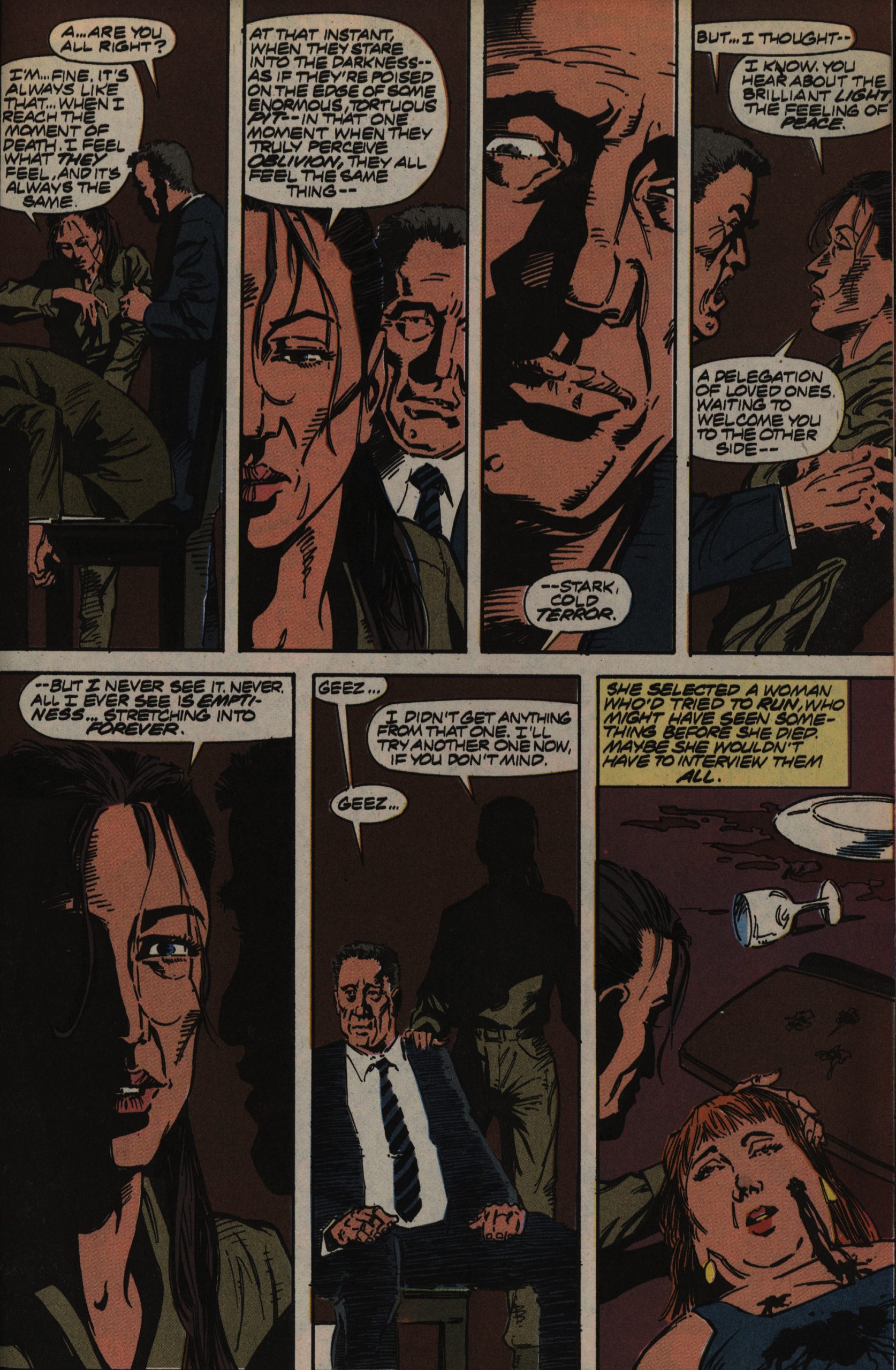 I like Mayerik’s artwork. He’s got a pretty interesting, gritty thing going for him, and the storytelling is super clear. I guess I’ve been sorta-kinda following him ever since back when he worked with Steve Gerber on various Marvel things… And then they lose the Comics Code. Was this something Marvel did line-wide? Hm… no, according to Wikipedia, Marvel kept the code until 2001, so I guess they decided they no longer wanted it on this book. 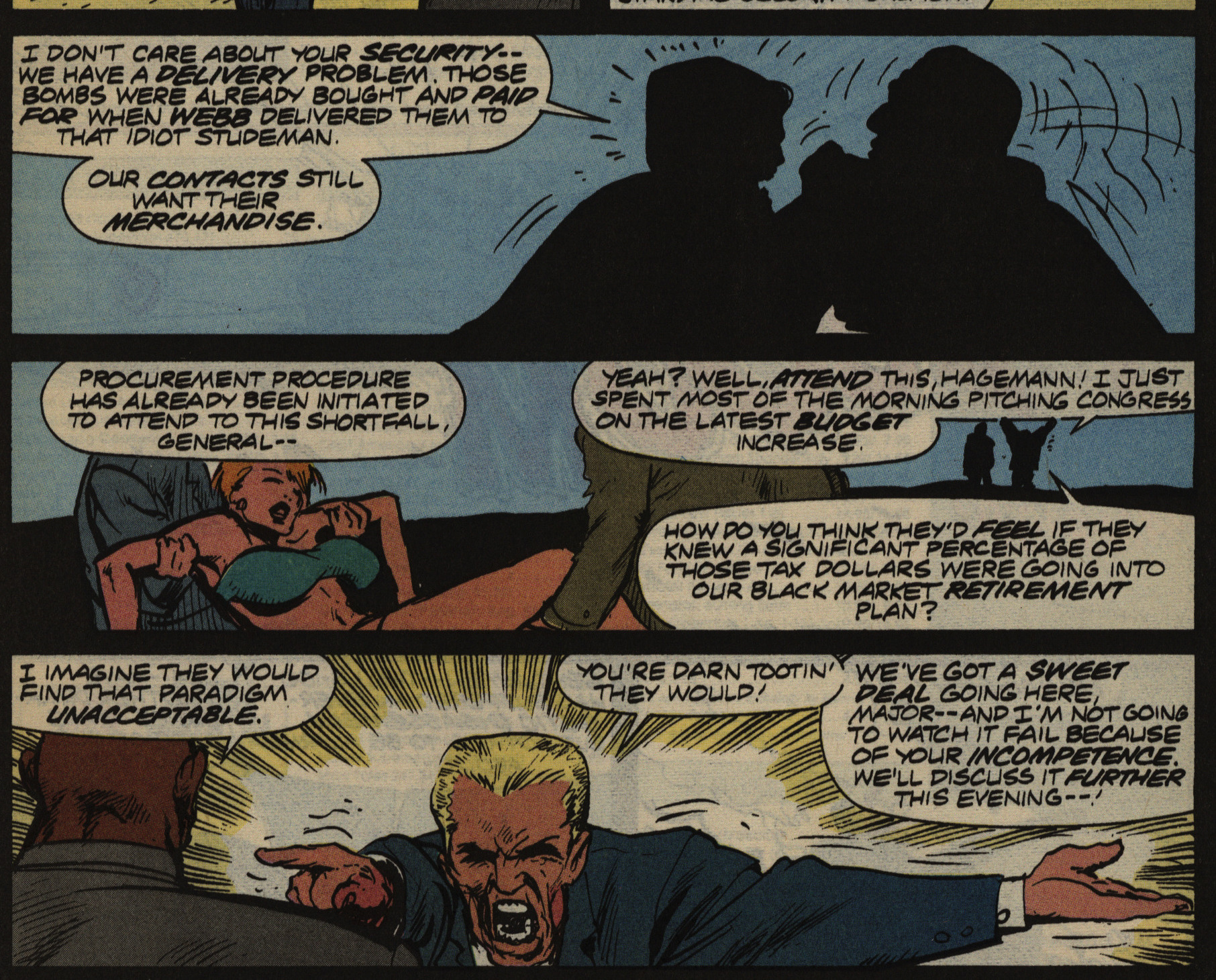 It’s a very late-80s book. The villains are evil businessmen, and Dan Quayle is president. 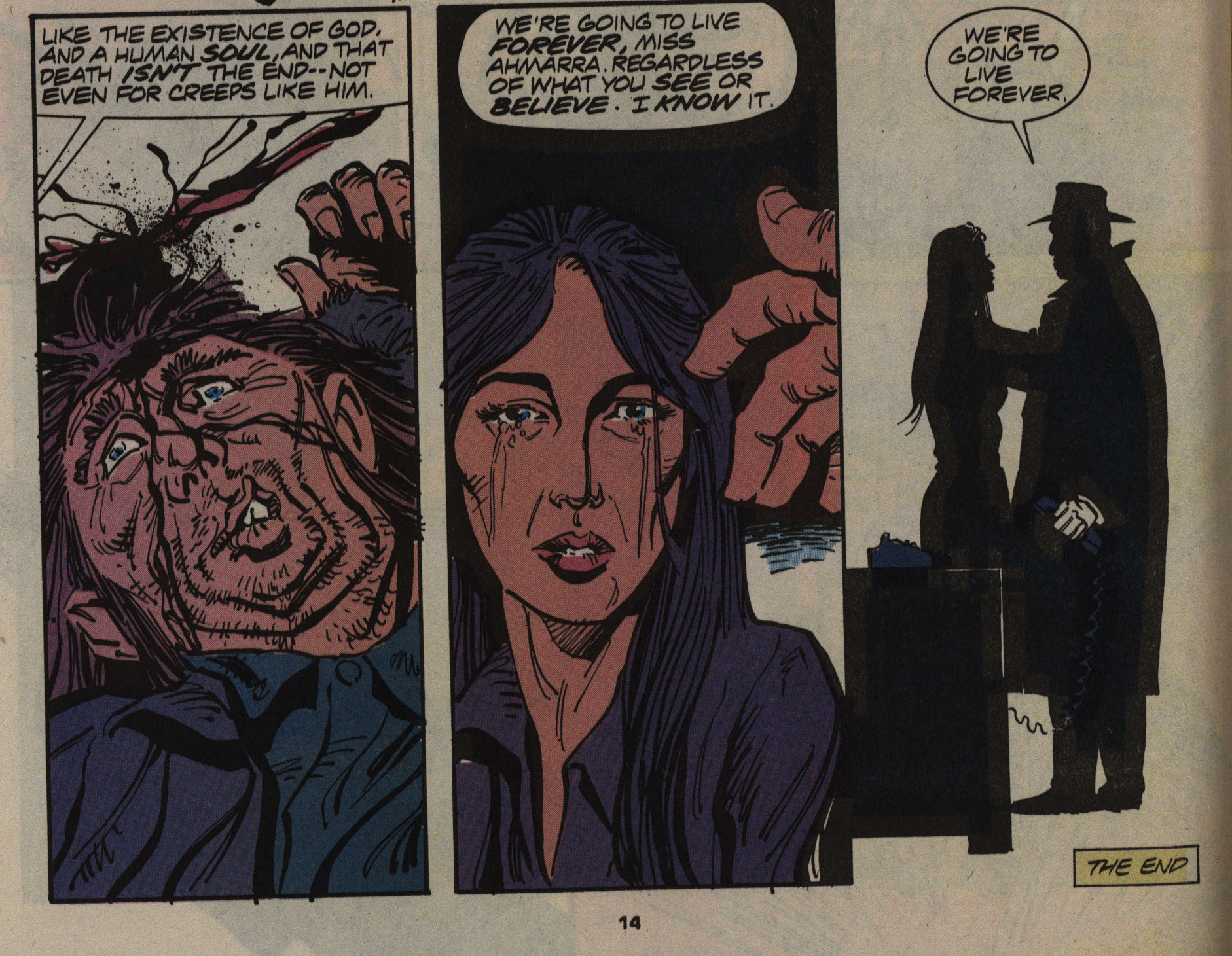 There’s some yawn-worthy christian stuff going on in Strnad’s serial, but it’s otherwise quite readable. 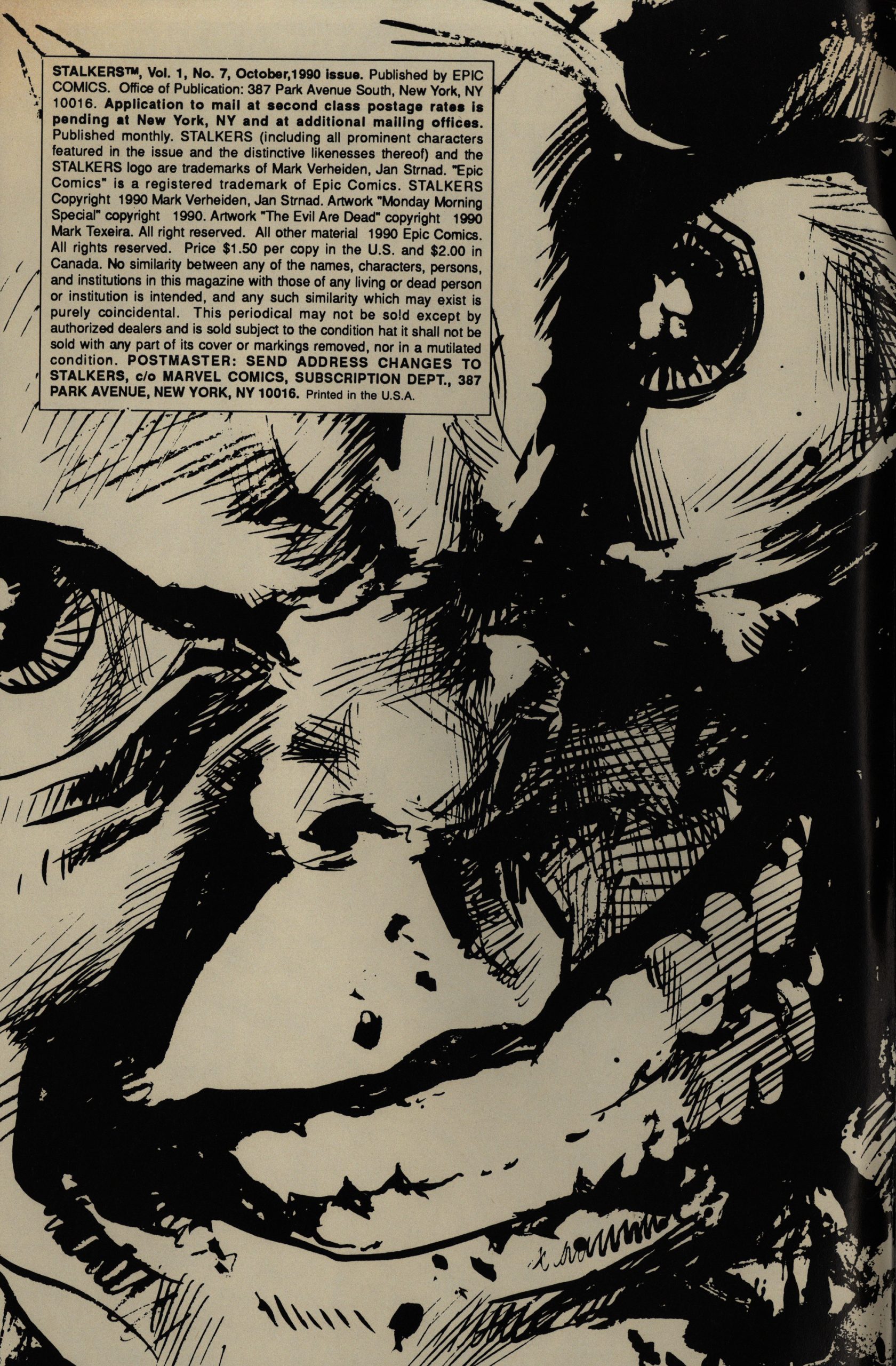 After the Comics Code was dropped, there’s a distinct drop in the number of ads in the book. As they didn’t increase the number of story pages, we get more of these “design” pages. 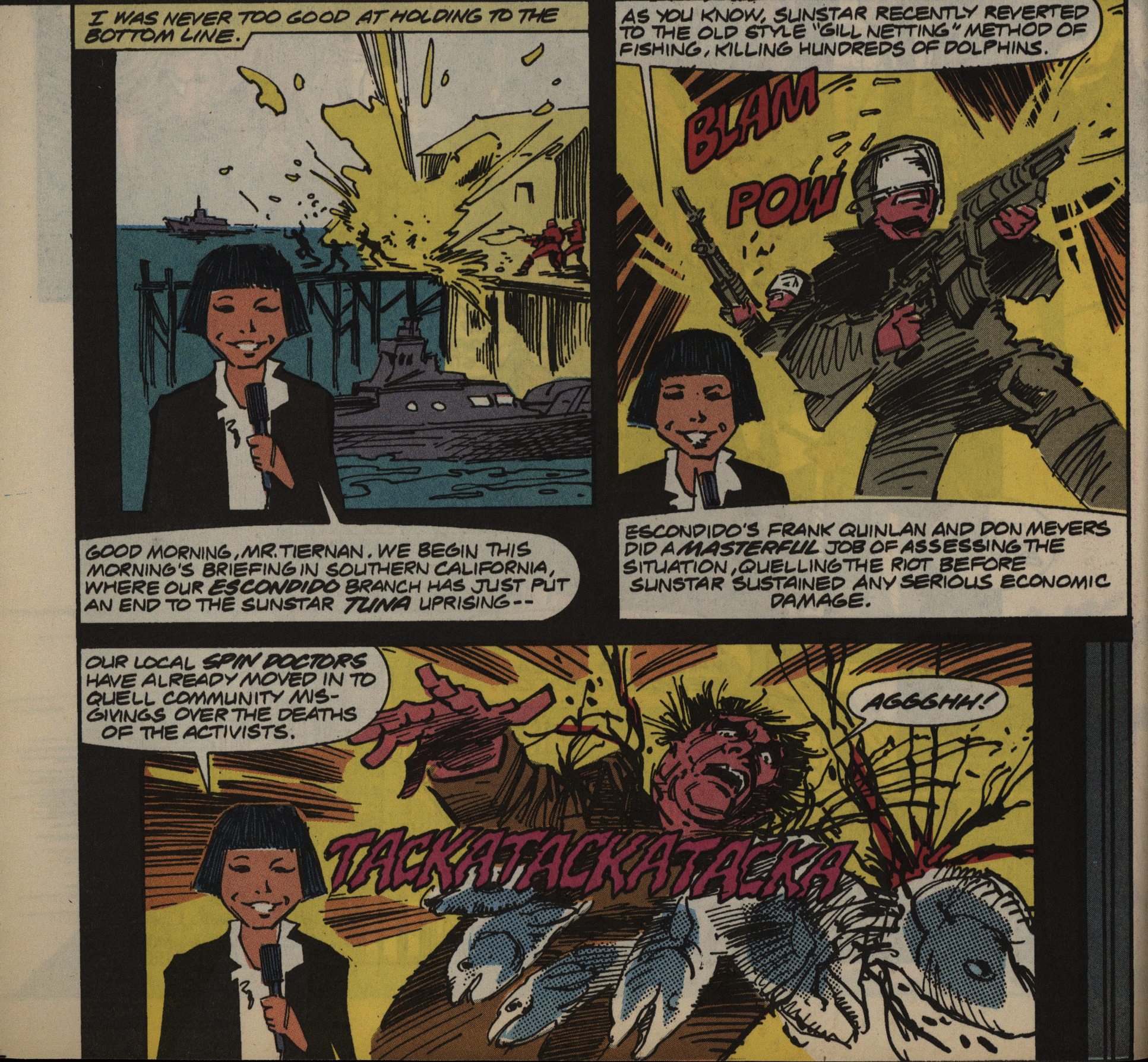 It’s not like the Stalkers are good guys, either: Here we have them killing people protesting dolphin deaths.

With the eight issue, Mayerik takes over the art for the entire issue, but the two-part structure continues on, with Verheiden and Strnad writing their own stuff. 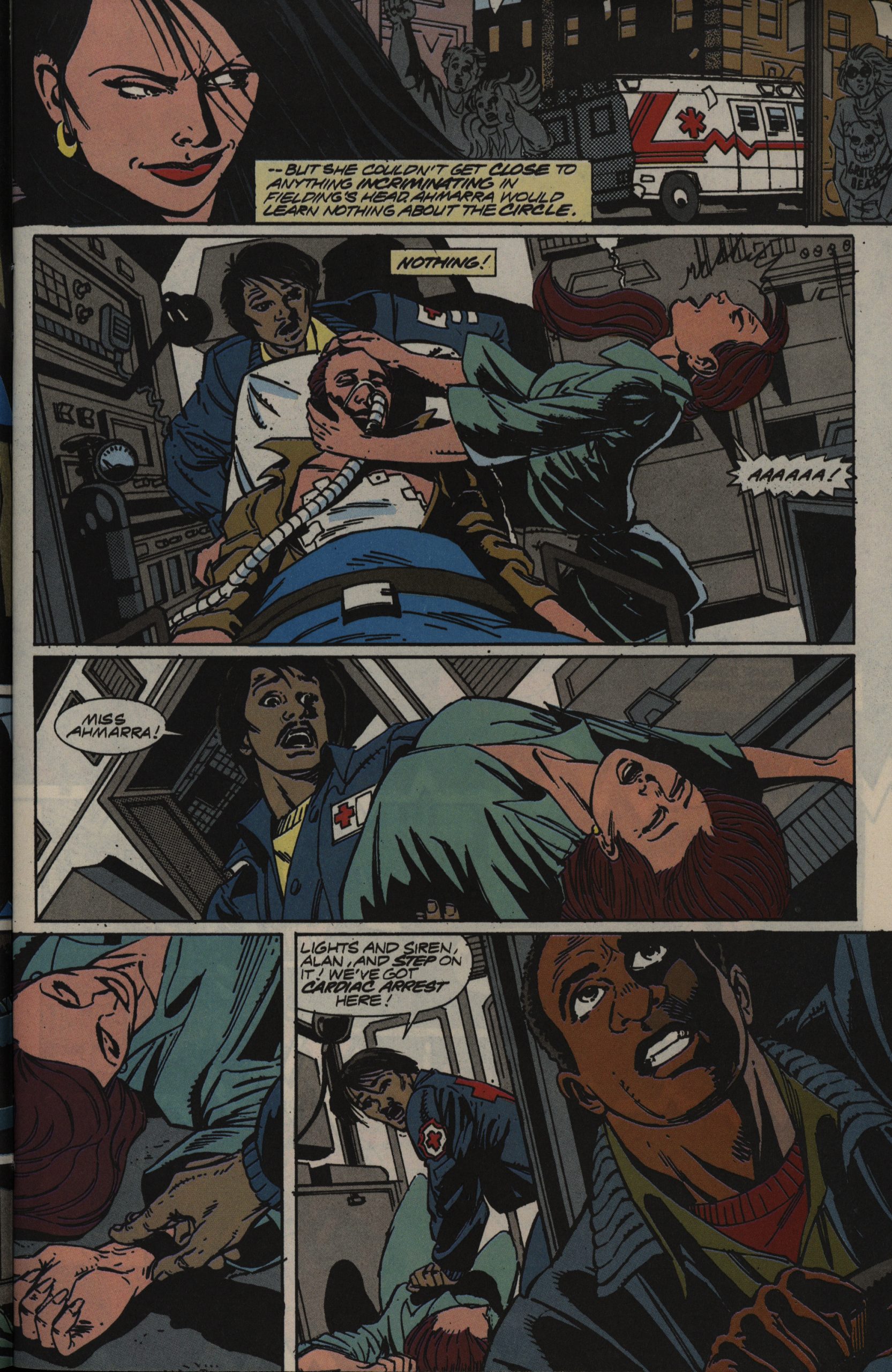 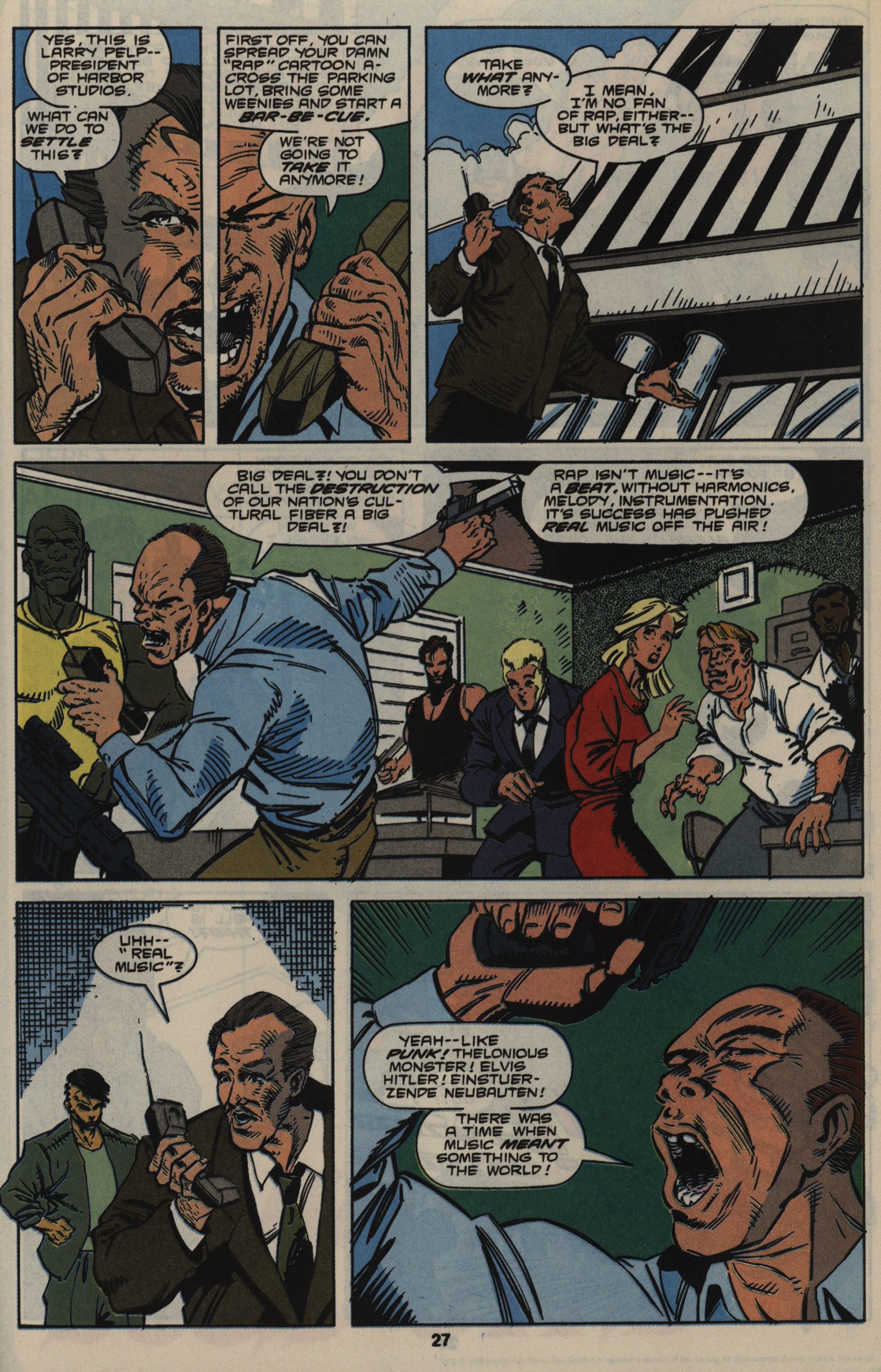 Yeah! The good kind of music! 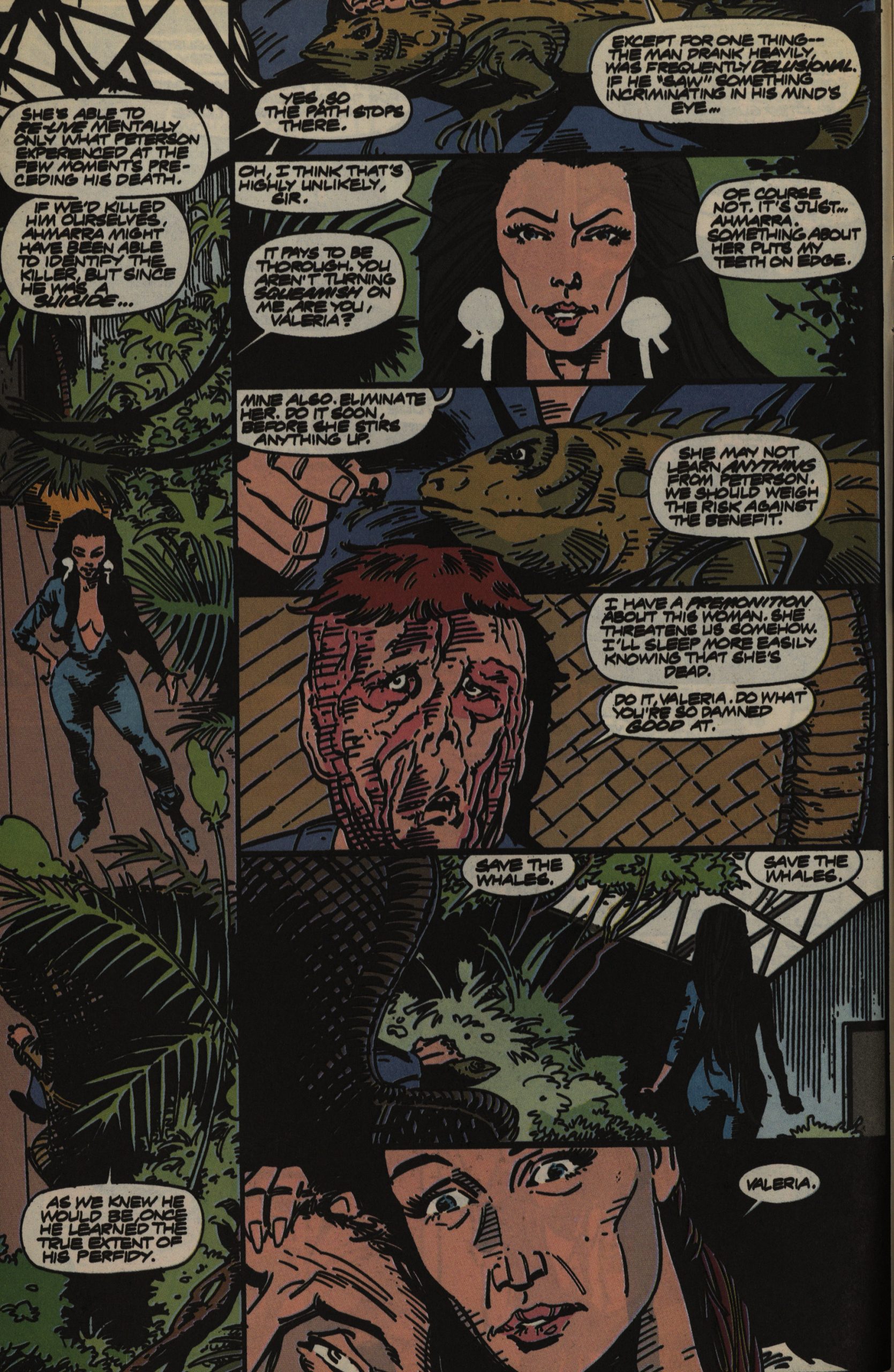 Mayerik does the art on final two by himself, and it looks kinda rushed and more rough than he usually does. Still has somewhat intriguing layouts.

In the final issue, both serials are wrapped off satisfyingly enough, but it does feel rushed. So my guess would be that they didn’t get much advance notice on the cancellation. But, hey, for all I know this could have been planned as a twelve issue series. If so: bad planning.

In my opinion, this is a surprisingly good real. It’s good a pretty fun concept, the storytelling is way better than average, and both Texeira and Mayerik are solid artists.

The only think I’m confused about is whether the name is supposed to be pronounced like in the Tchaikovsky film or not.

But what did interest
me about the book was the fact that
the series’ writers and creators are Jan
Strnad and Mark Verheiden.
Prior to this collaboration, both
men have individually created and
written intelligent series involving
military settings—Strnad has given us
the very enjoyable Dalgoda stories,
and Verheiden’s received critical and
commercial acclaim with the more
recent Aliens, Predator and American
titles. So you think that a comic
with stories by both of these writers
would be really good.
Well, it’s not.
The Comics Code seal and Spider-
Man face on the cover was a tip-off.
A gritty dystopian vision chock-a-
block full of terrorists and mercenar-
ies can’t possibly get past the Comics
Code unless of course, you water it
down so it reads like a cross between
G.l. JOE and The Punisher. The
originality found in the writers’ earlier
works is nowhere to be seen here.
Instead, we get to watch Mark and Jan
play cliche games with their toy sol-
diers. This comic is little more than
22 pages of testosterone on parade.
Since this review was already late,
I decided to hang onto it until Stalkers
#2 came out, to see if it was an im-
provement over the first issue. It
wasn’t. Sorry for the delay.

Stalkers is of the latter kind; there’s never really any doubt that it’s a satire. What makes it brilliant, however, is the fact that it’s not only a satire, it’s a fairly prescient look at where society was heading in 1990 and where we find ourselves today. It’s amazing how much Strnad and Verheiden get right, or at least close, to how society would look in the near future.

The first two issues are staggeringly good, the rest are very clever and fairly intense, and Stalkers deserves a look, especially if you’re a fan of the original RoboCop and other prescient satires. It’s just that good!

It’s never been collected or reprinted, which is a shame, but a 13th issue was published in 2005.