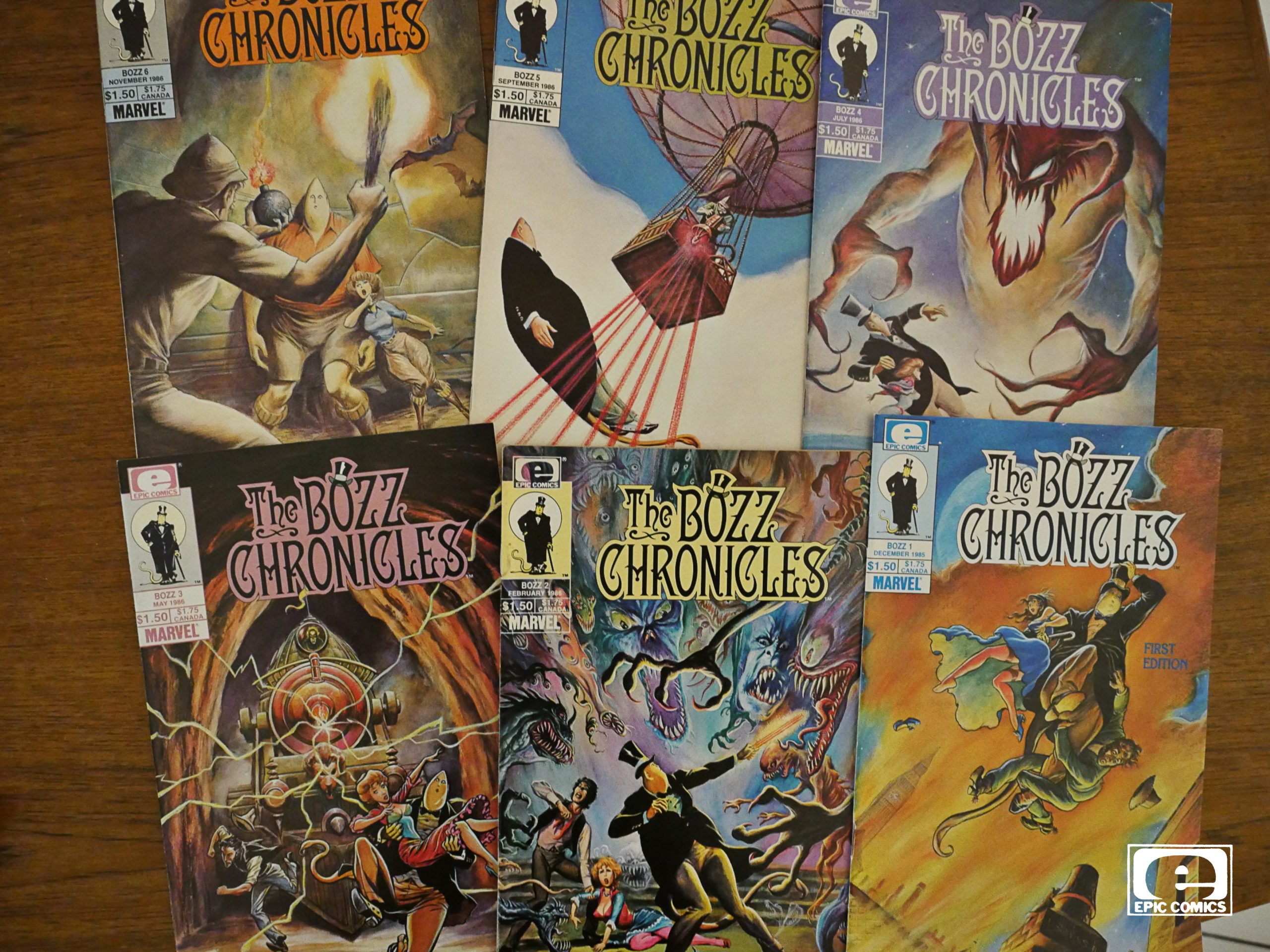 The Bozz Chronicles (1985) #1-6
by David Michelinie, Bret Blevins and people

After a stretch of series from people who’s work I’m quite familiar with (or should that be whoms?), I know little about Michelinie and Blevins. Or, indeed, this series, which I can’t recall knowing existing before starting this blog series. 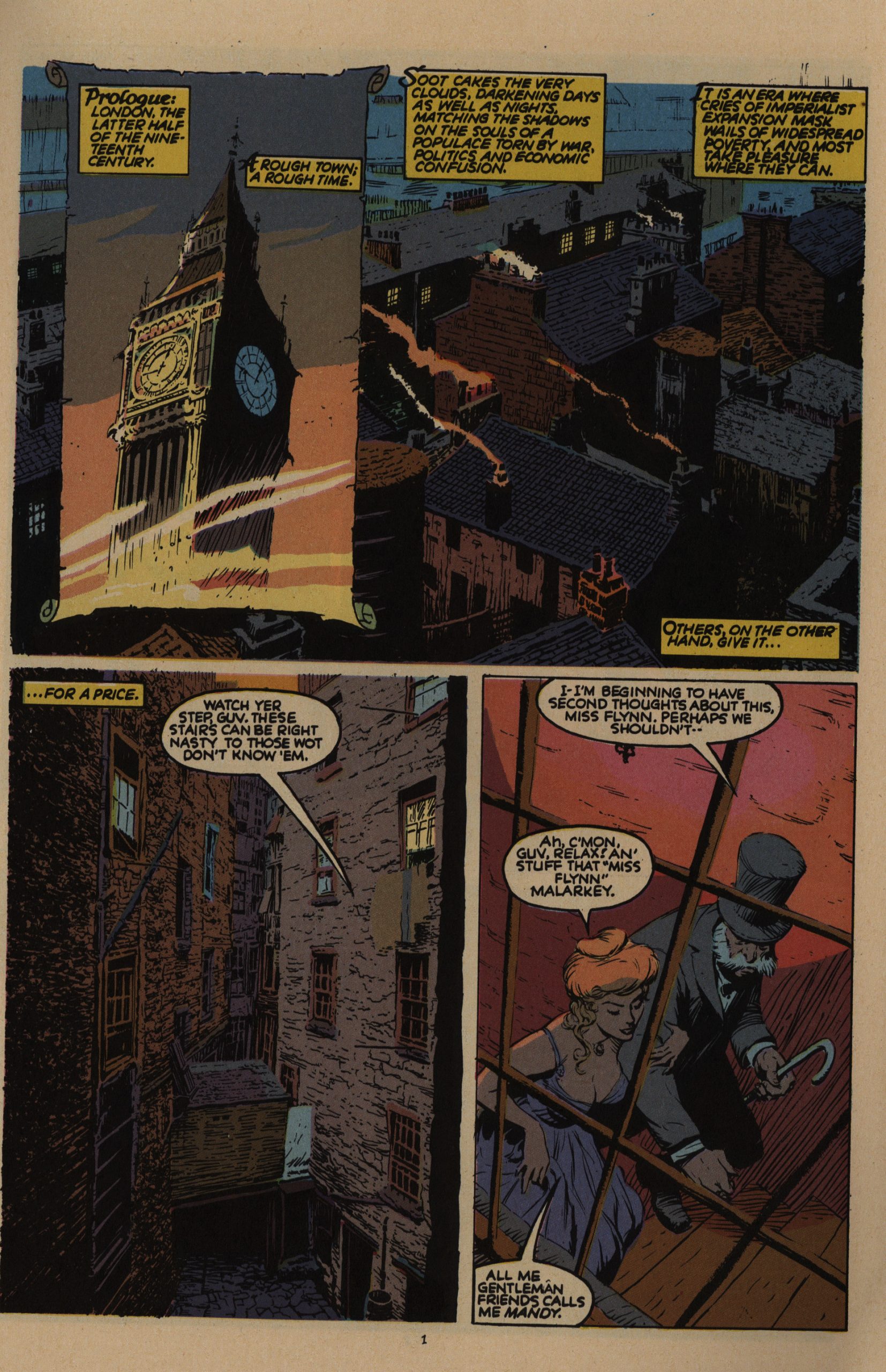 I’m pretty intrigued immediately by the Victorian setting, the juxtaposition between “imperialist expansion” and the poor, the really detailed artwork (with fun angles), and… “guv”, “malarkey”, “wot don’t know them”: Yes, we have cod Cockney. What’s not to like? 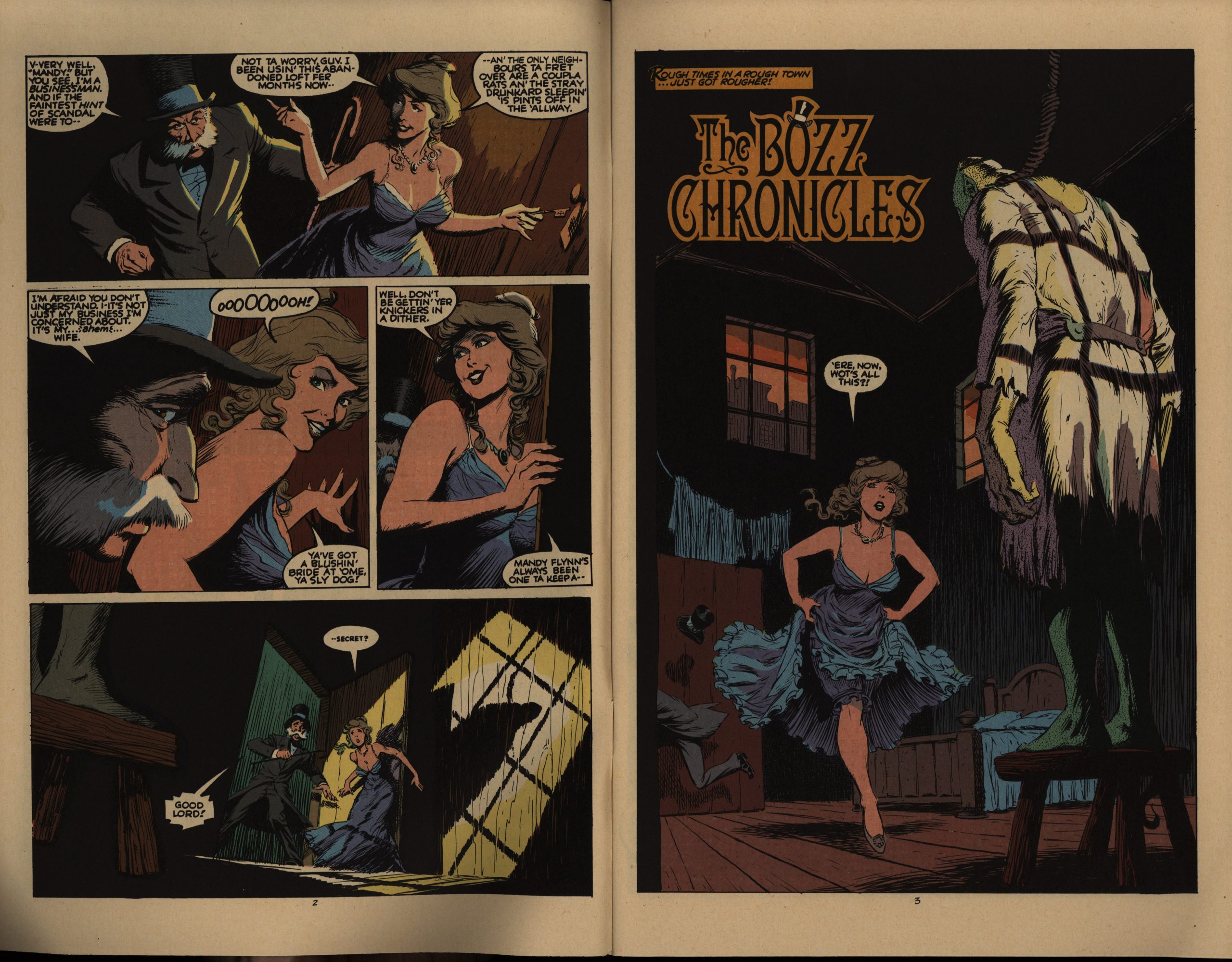 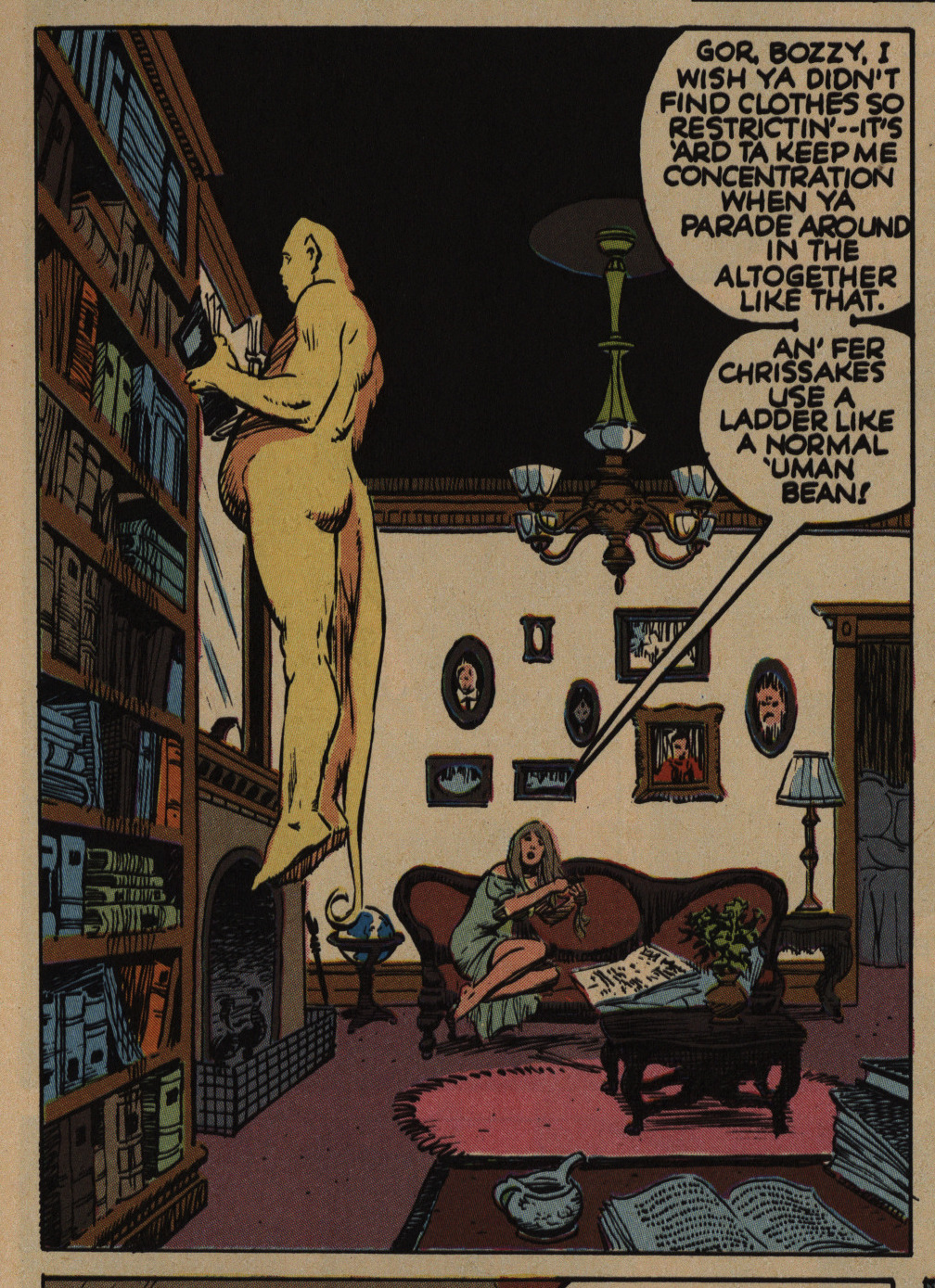 And then we’re suddenly six months later and we’re into the first adventure. I really love that they did the “origin story” in just four pages, so that we can get into the concept here: It’s an alien and an ex-prostitute that are private eyes in Victorian England. Concept, ey?

(OK, we get another page later that explains how we got from the garret to the posh flat, but that’s OK.) 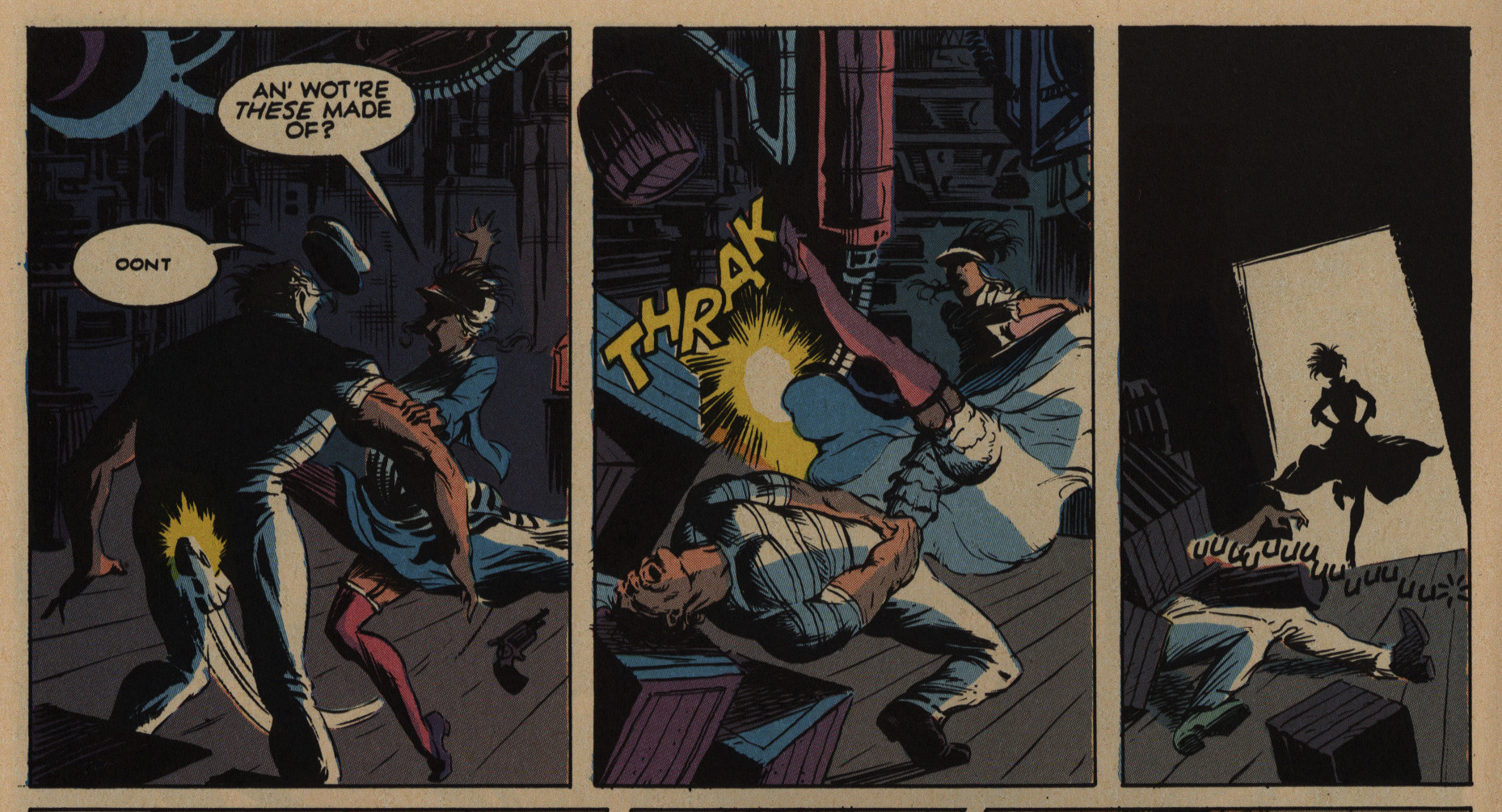 So the alien gets suicidally bored, so the gal has to keep him entertained by finding interesting cases for them to solve, see? Yes, this isn’t very serious fare, but it’s inventive, silly when it needs to be, and well-told.

The mysteries they solve aren’t very mysterious, but they work well. 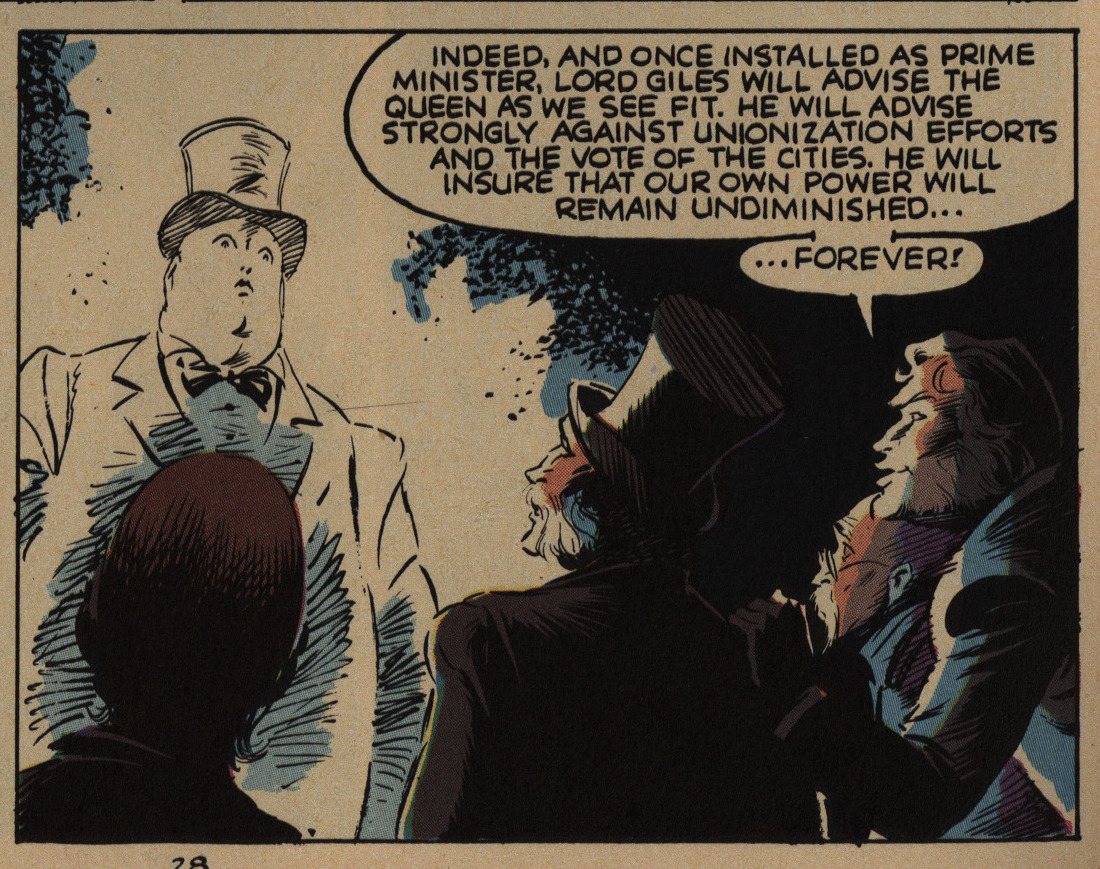 It’s not that often you see anti-unionisation villains. 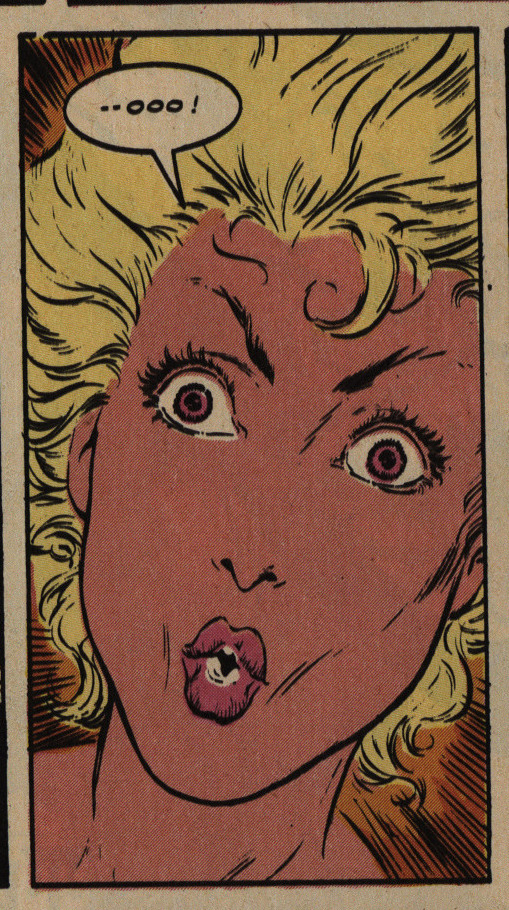 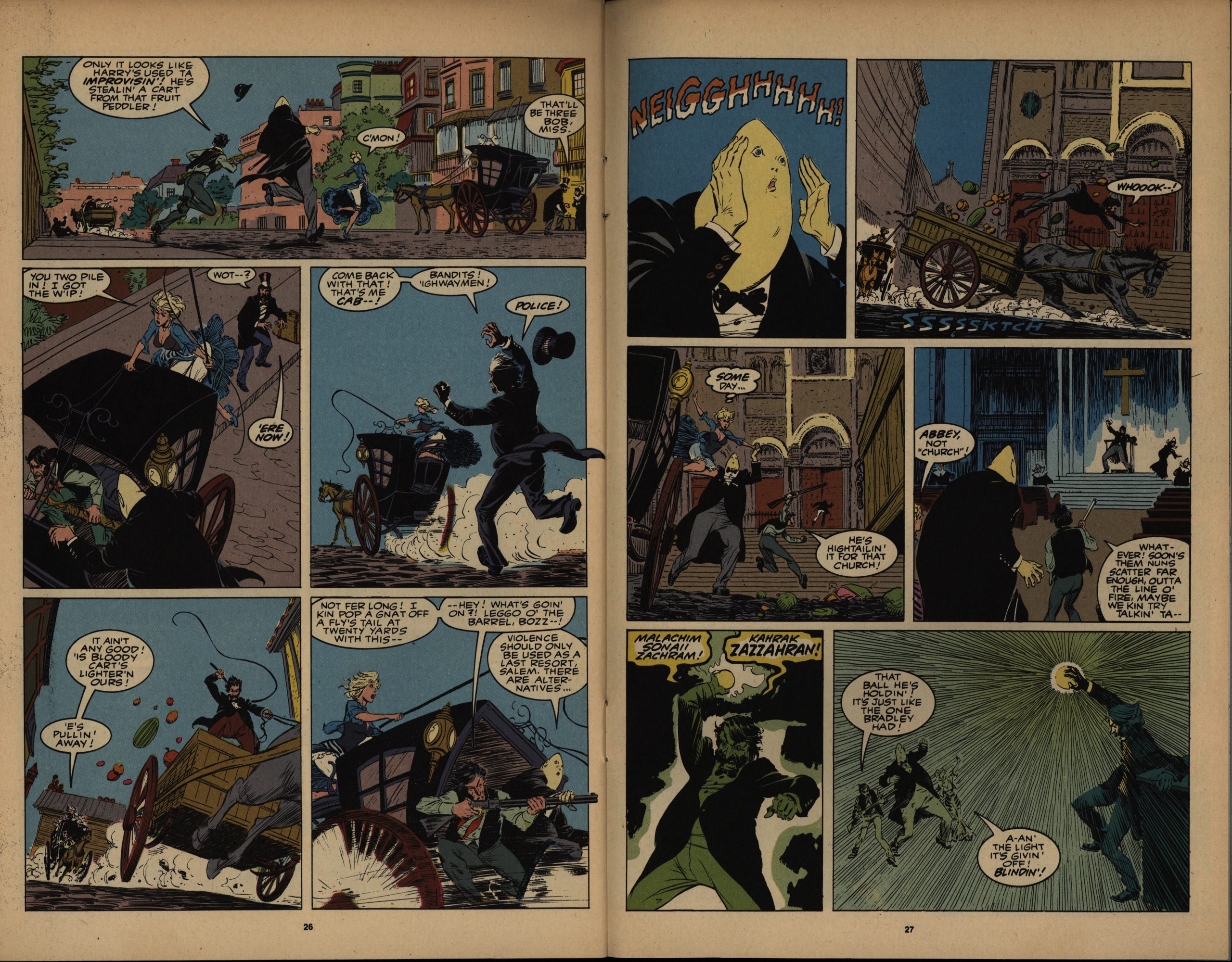 I think this is pretty flawless. It’s a well-choreographed chase scene with a silly denouement. (The alien guy can talk to animals. I mean, other animals than just humans.) 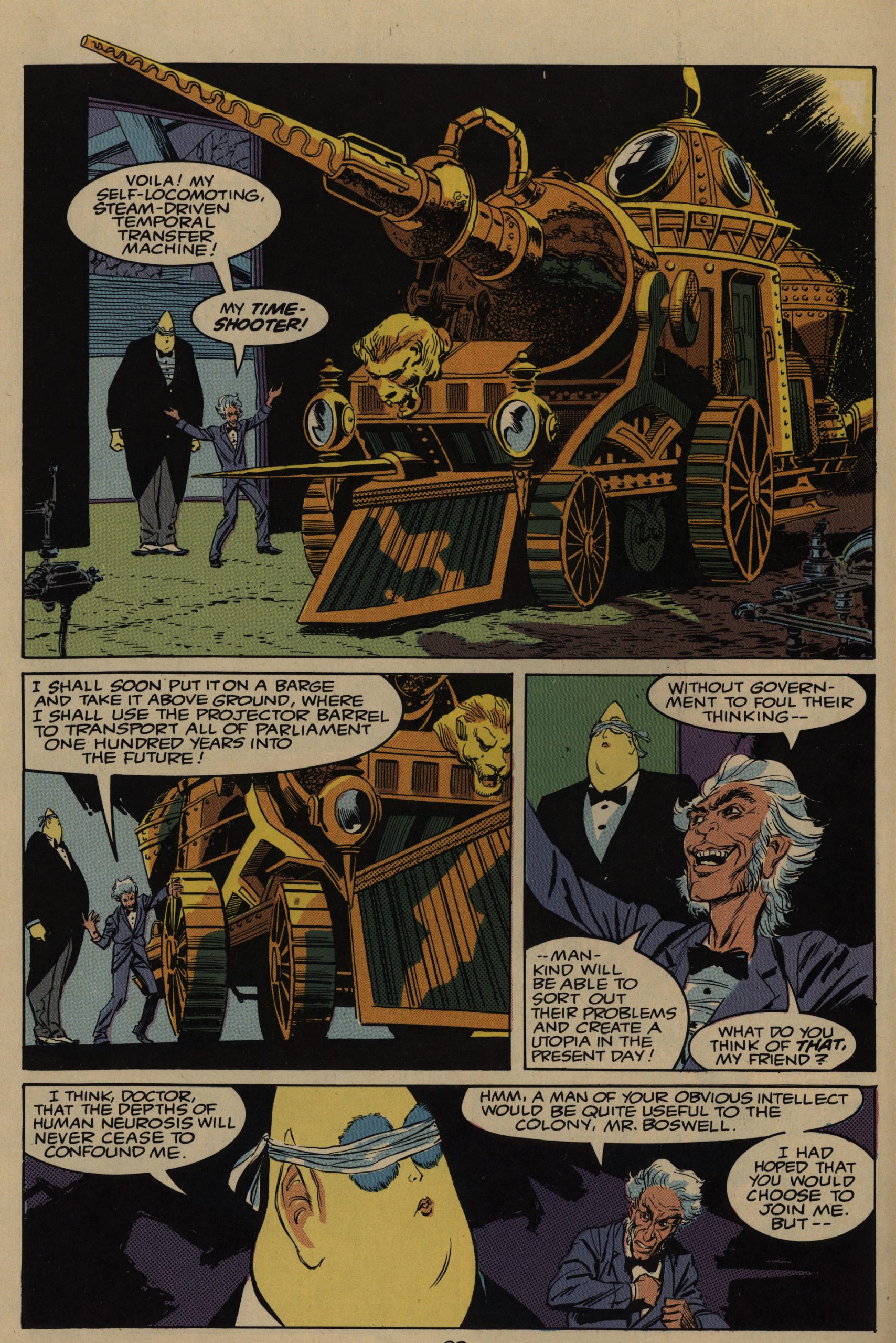 Al Williamson is listed as co-inker on one issue, and I was curious to see whether any of the pages would look super-Williamsonesque… but they don’t. 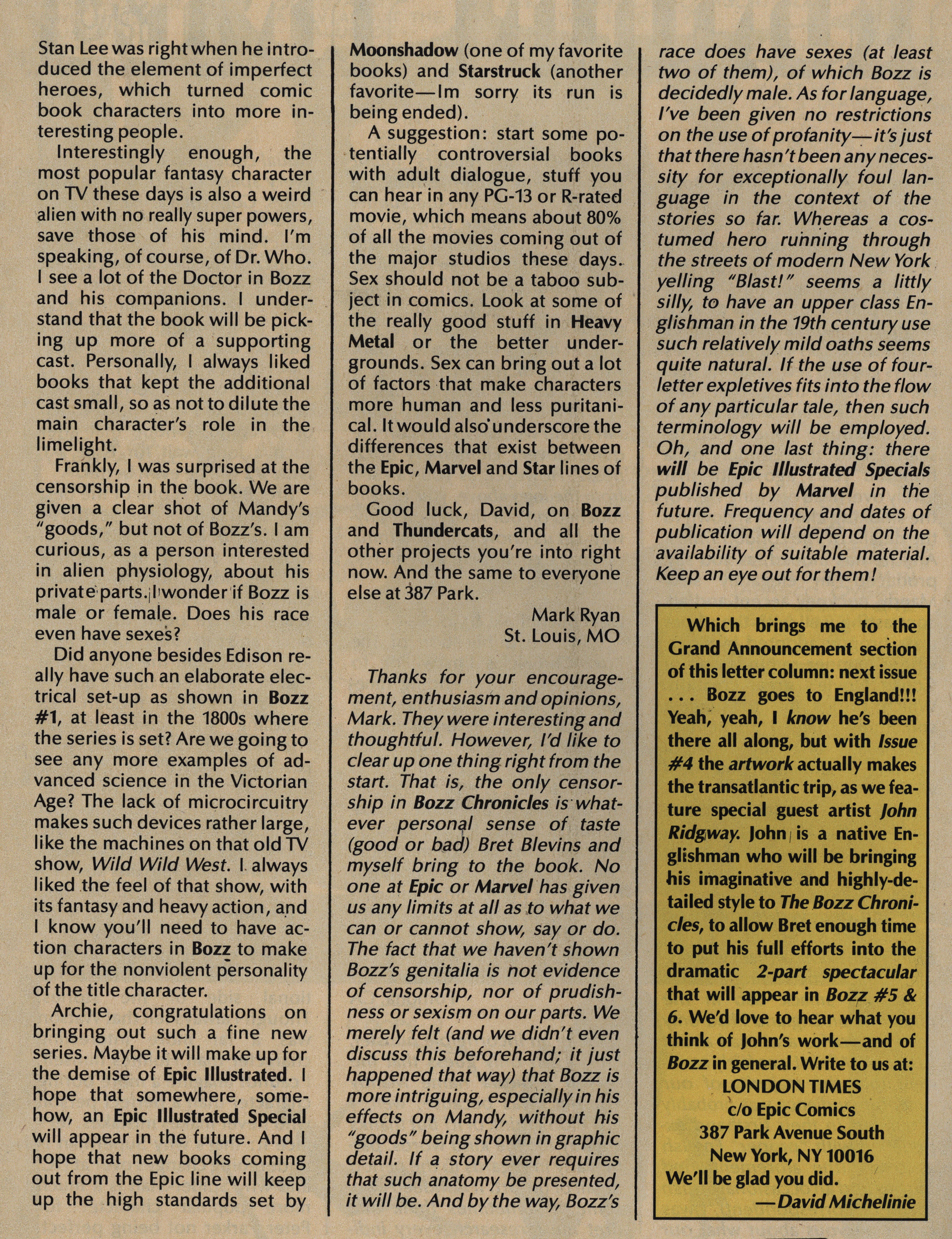 Somebody writes in to complain that we never see the alien’s penis. 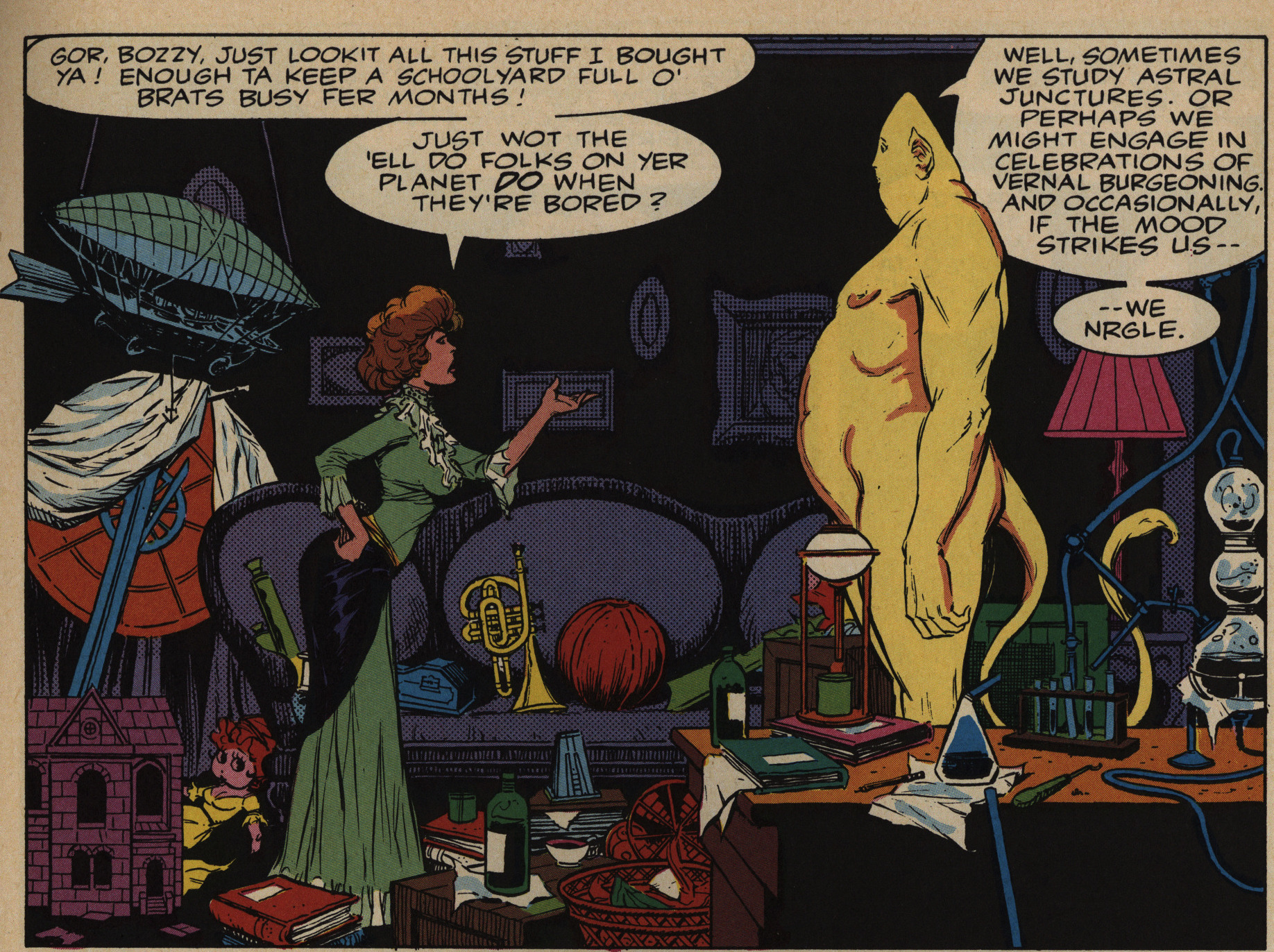 And there are perhaps one too many scenes like this with things strategically covering up the genitalia, but I think the more annoying thing is that the female protagonist tries to get into his pants, I mean, try to get him into pants and then into them. So much. I mean… it’s just hard to see why she’d be physically attracted to him.

I mean, with all those strategically positioned flower pots. 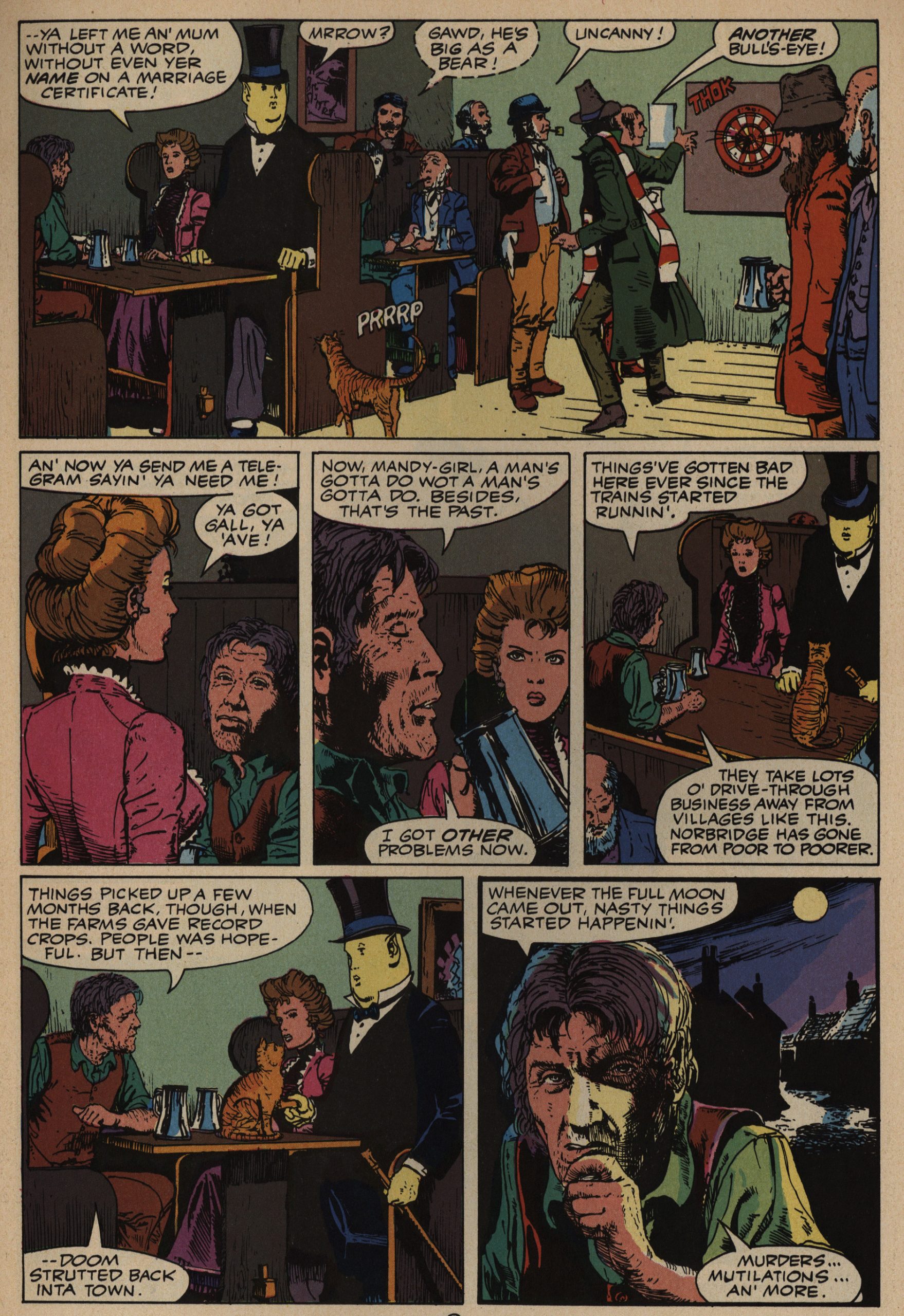 John Ridgway does the artwork for one issue, and he’s fine, but not as good as Blevins. And has he ever seen anybody do darts? I’m pretty sure the norm isn’t to have your hand 10cm from the board? 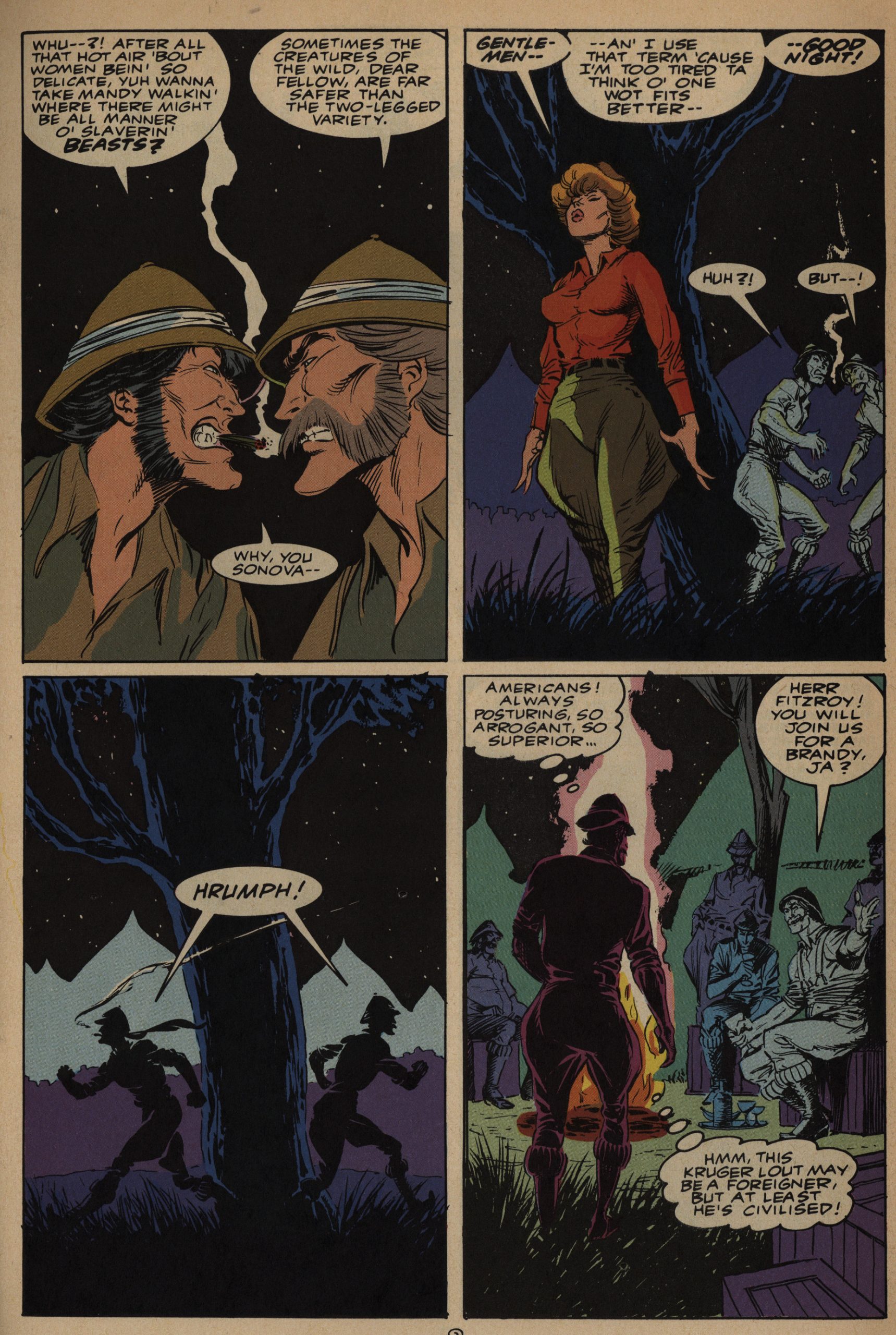 The subplots involving the other guys fighting over the female protagonist are fine, I guess, but they crowd out the fun mystery plots that the first issued had. 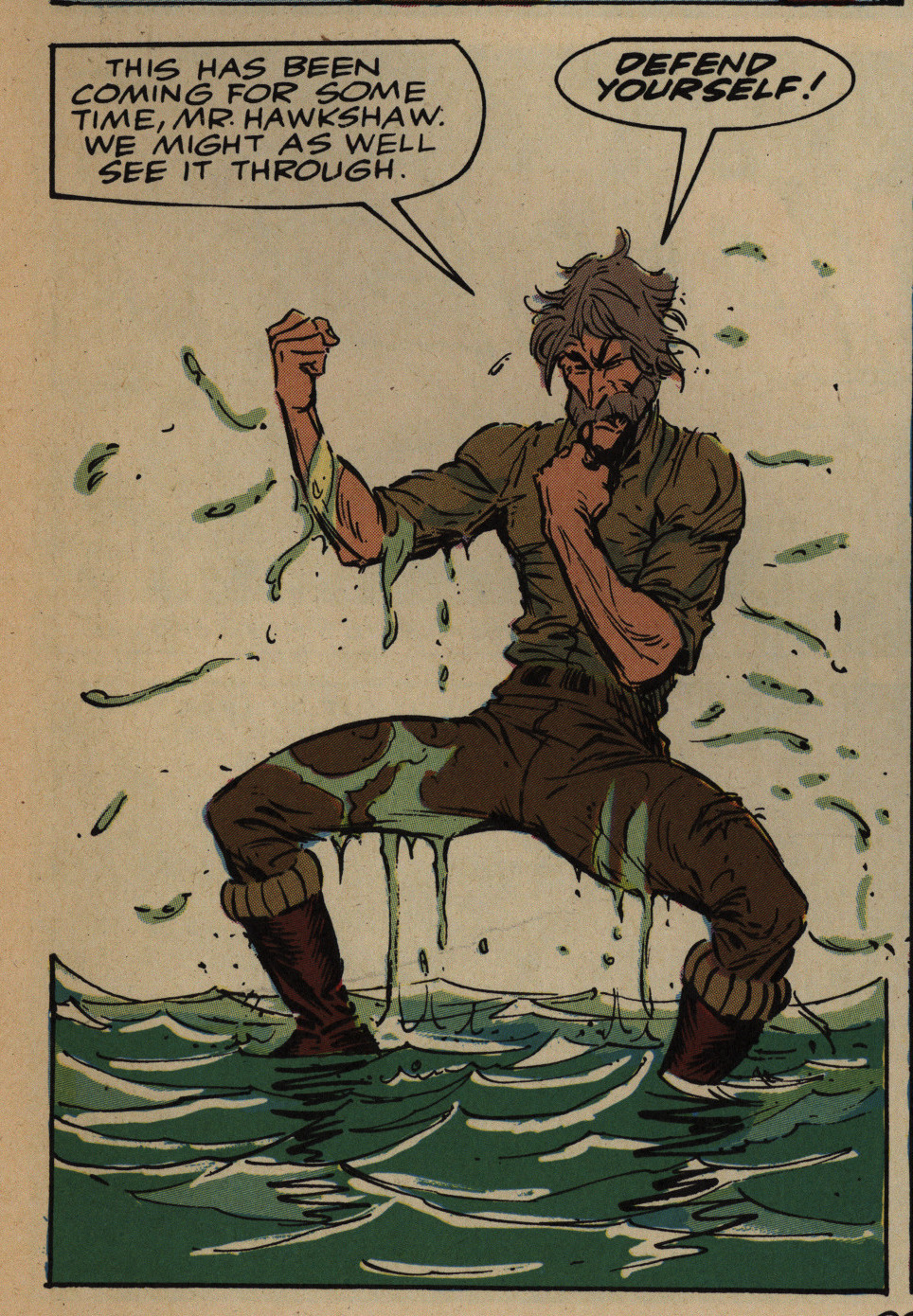 OK, that’s it: It’s a fun little series, and it’s probably been made into several TV series by now, but under other names. I mean: Alien sleuths doing the Sherlock Holmes thing is just a natural combination.

Somebody writes in Amazing Heroes #104, page 35

The Bozz Chronicles, Michelinie’s
Epic Comics series about a melan-
choly alien stranded on Earth in Vic-
torian England, will end its current
run with issue #6. “It was successful
enough to receive a six-issue
renewal, which I originally accep-
ted.” Unfortunately, a number of
production problems came into play,
threatening the book’s future. Artist
Bret Blevins, moving into numerous
commercial art projects, had diffi-
culties meeting his deadlines.
Michelinie also experienced edi-
torial problems: “In producing the
book, there were a number of
frustrations due to irreconcilable
differences between myself and cer-
tain members of the editorial staff.
“Bozz Chronicles is not neces-
sarily dead, but as of right now, the
regular series is over.”
Michelinie really likes Bozz and
Mandy Flynn (whose Cockney
speech patterns were based on
Fulucating Rita’s Julie Walters), and
hopes to use them again in a special
or a graphic novel. “Bob Layton
informs me that Barry Windsor-
Smith likes the characters and would
like to draw a Bozz story.”

Yeah, I can totally see that Blevins would get hired to do better-paying gigs than this book. But I wonder who those “certain members of the editorial staff” Michelinie had problems with were.

In her relationship with Bozz, she
seems to achieve the balance that
would fulfill the fantasy of many a
human male—being both madonna
and whore; serving as soulmate
without stifling. As she is worldly
wise, Borz is W’ide-eyed innocence
reversal of roles that is refreshing
and rare in a comic book.
After seemingly doing little more
than work from other people’s plots
in recent months, David Michelinie
haq produced one of his better solo
efforts here. His attempt to capture
the various idiosyncrasies of the Brit-
ish dialect succeed better than most,
presenting dialogue that at least
sounds right to my American ears. It
enhances the charm of Mandy
greatly.
I was somewhat surprised by the
visual job done by artist Bret Blevins.
The graphics here far surpass those
I have seen from him in the past. In
those panels where it is at its very
best, his art conjures up memories
of the early work of such names as
Kaluta, Jones and Wrightson.
Blevins has also added another
dimension to Bozz. His portrayal of
Mandy is what one might expect—
a beautiful, shapely woman bound
to stir the blood of most males. Bozz,
on the other hand, has a pointed
head, triple chin, and bloated belly.
If one WdS to judge solely by the
script, it would be believ«i that Man-
dy is attracted to him simply because
of his enlarged genitaliae But Blevins
gives him more than this. With his
wdif-like eyes and his tiny, pouting,
almost feminine mouth—the alien
Bozz is one of the most visually sen-
sual male charaders I have ewr seen
in a comic. Thus, the relationship
between Mandy and Bozz takes on
new depth—it has many levels, pre-
sented through both script and art.
While the plot itself is no great
tredqure, the interplay between Man-
dy and Bozz is appealing enough for
me to recommend that you sample
The Bozz Chronicles.

A collected edition was released in 2015 from Dover.

Final Verdict: 8.0 – Given a new lease on life from a sharp-eyed publisher, “The Bozz Chronicles” marries engaging characters and Victorian-era strange case sleuthing with early art by one of the most overlooked draftsmen in modern comics.

So did this one:

And though the charms of and bond between Mandy, Bozz, and Salem will force you to return to this series, the mysteries, while serving primarily as a framework for character development, contain outstanding imagination and just plain fun with a dash of magic.