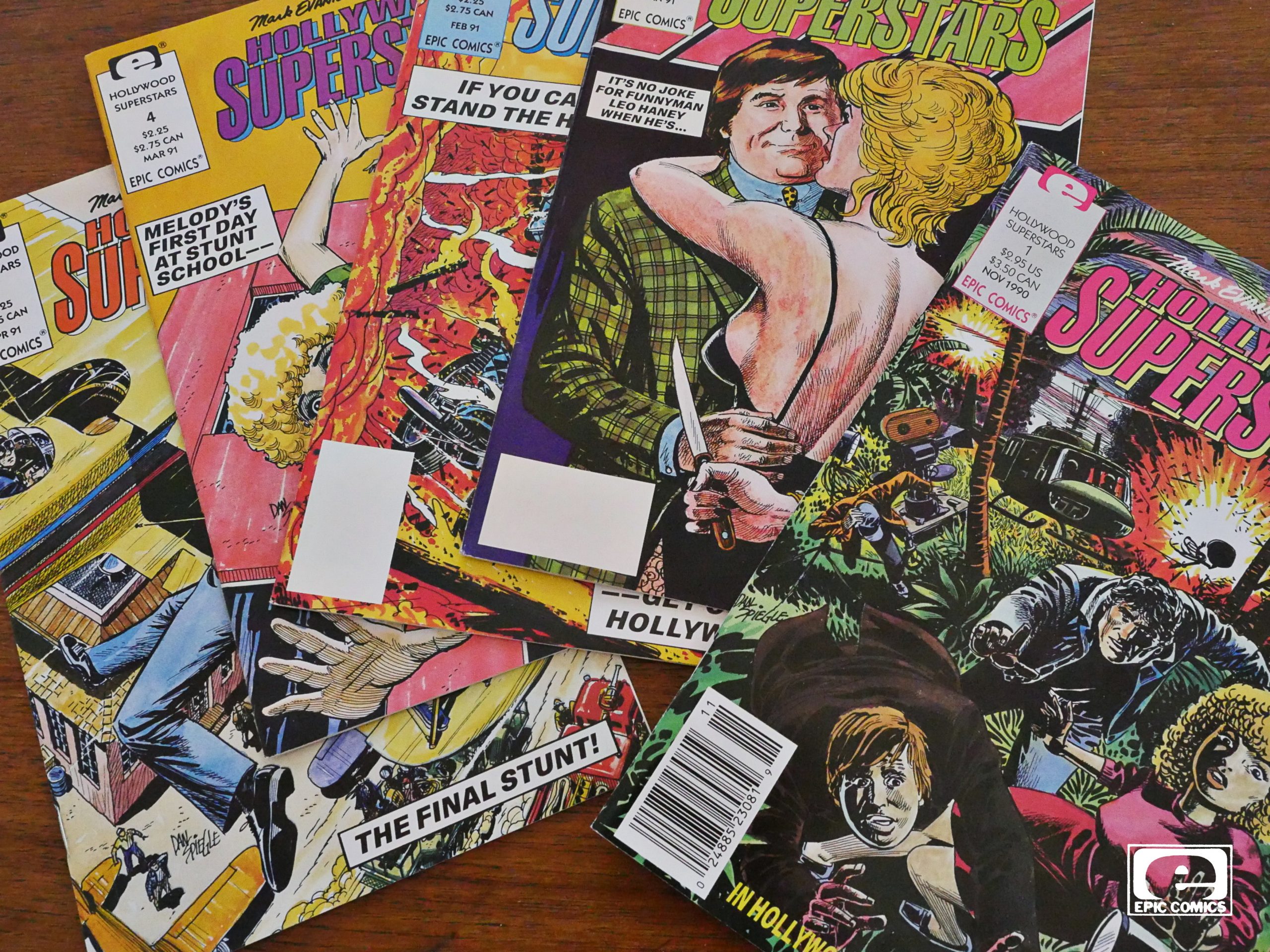 Evanier and Spiegle were behind the well-received Crossfire series over at Eclipse Comics a couple years earlier, which had been cancelled because it didn’t sell. It was about a private eye in Hollywood, and since that wasn’t very in the Zeitgeist, what would they come up with this time? 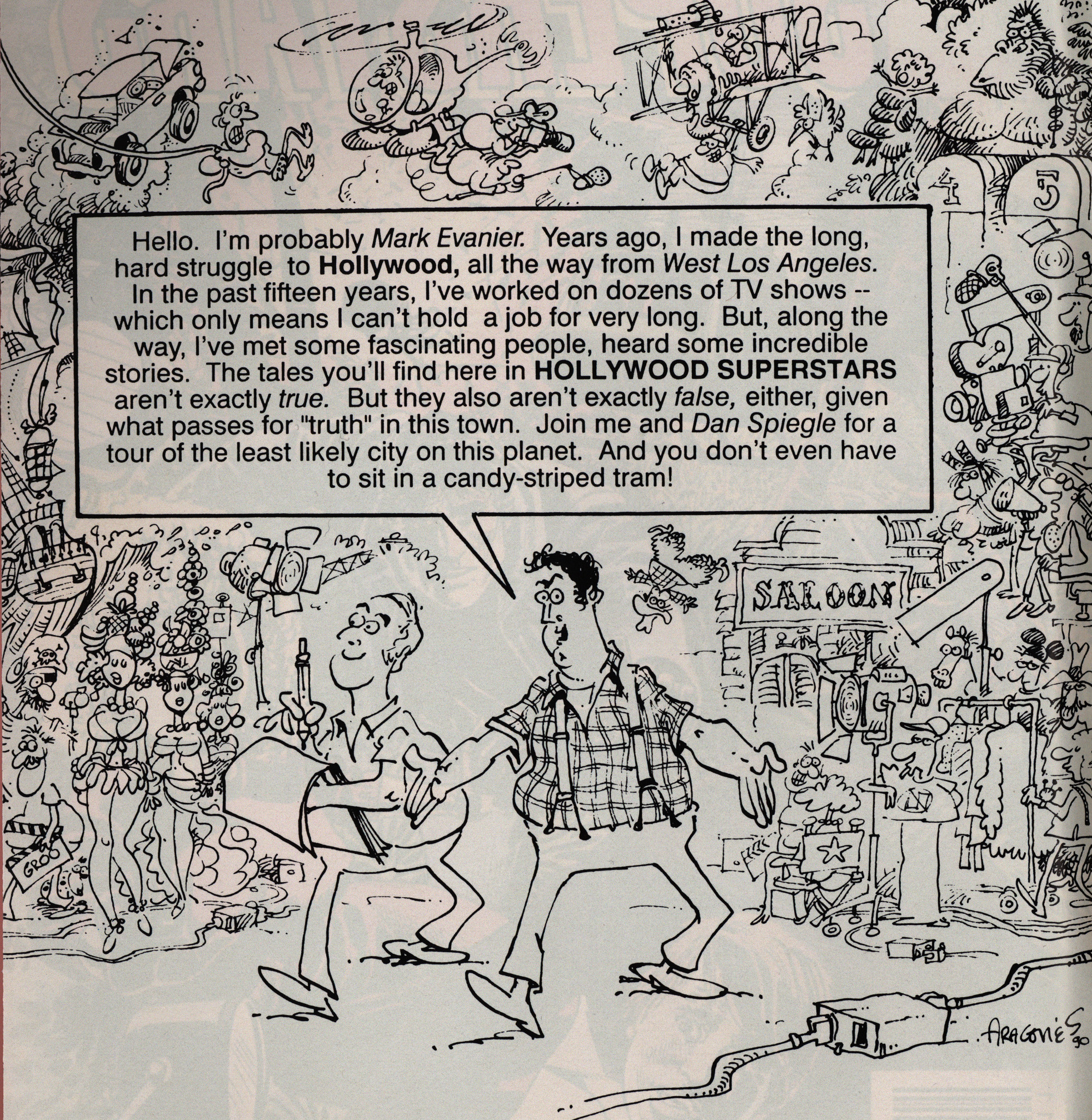 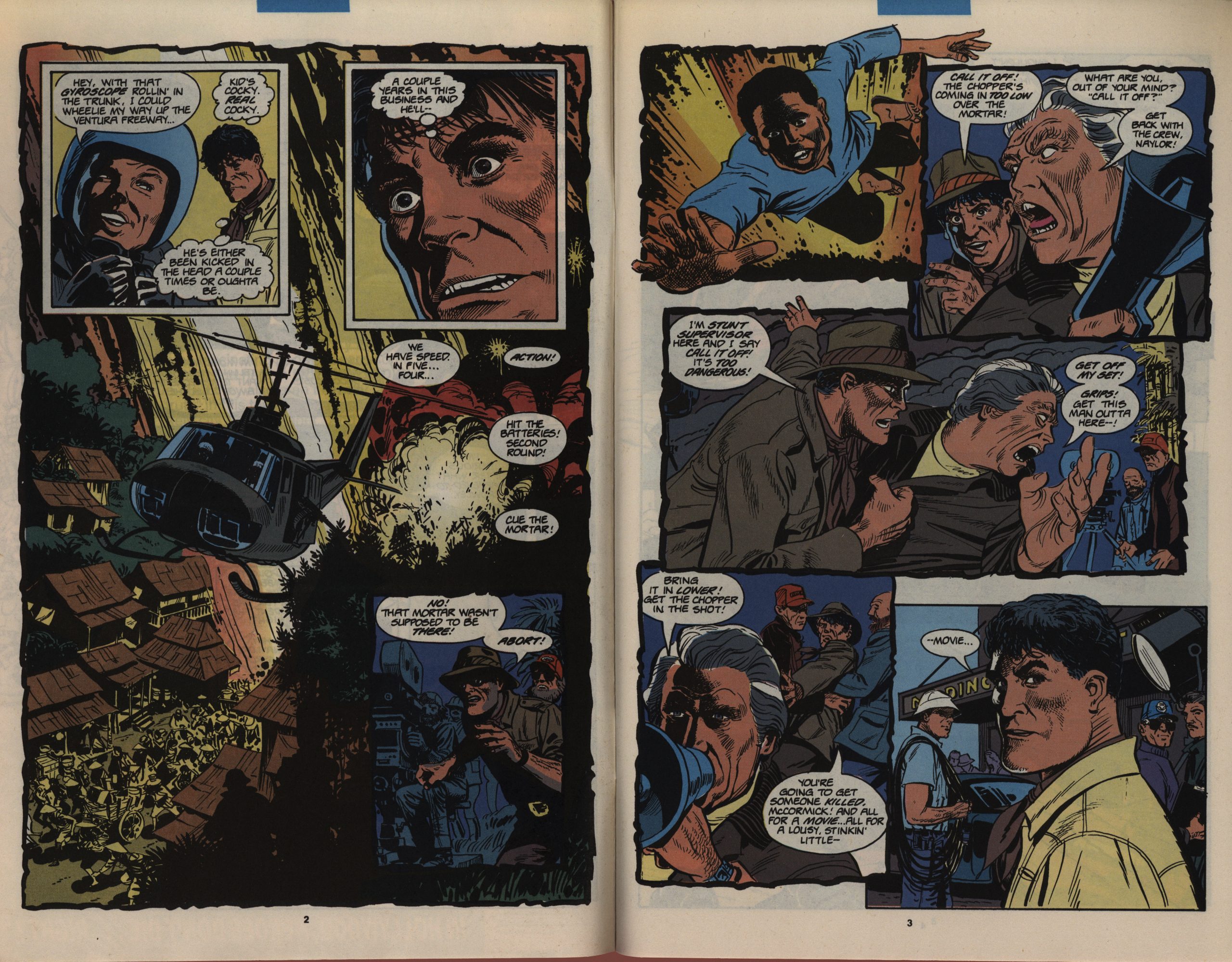 Spiegle’s artwork on the last half dozen issues on Crossfire had been really strong. They were in black and white and had a very 60s British newspaper strip quality to them, I thought. This one, of the other hand, seems more rushed. I mean, look at that face of the diving guy in the upper left corner of the right-hand page. And the face of the guy in the yellow jacket seems to morph into Hulkdom here and there… 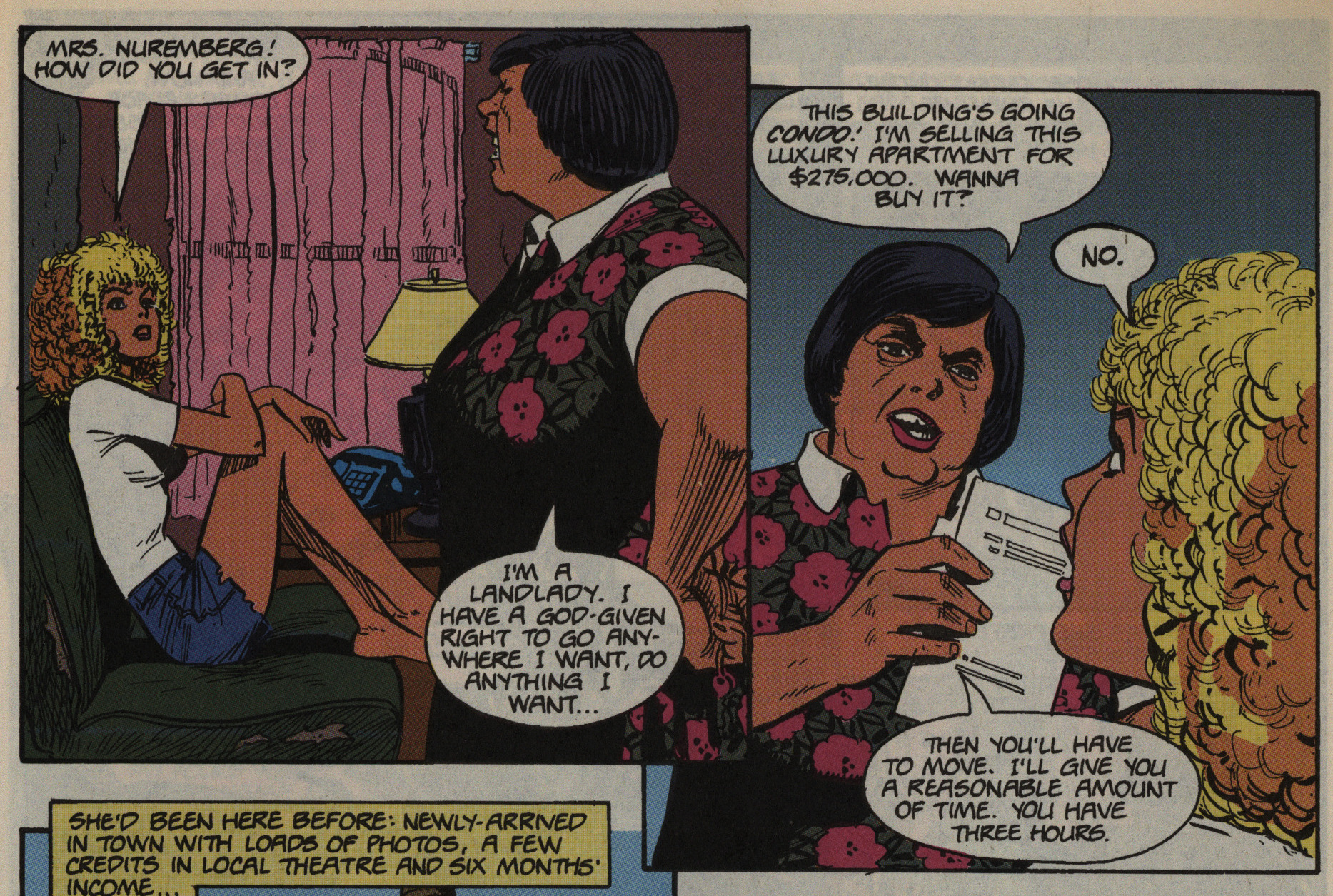 The writing is very… economical? In a typical scene, we have a new character helpfully (for the reader) announcing she’s a landlady, and then ejecting a character from her home. It’s got a TV sitcom sheen to it, doesn’t it? There should be canned laughter after “You have three hours”. 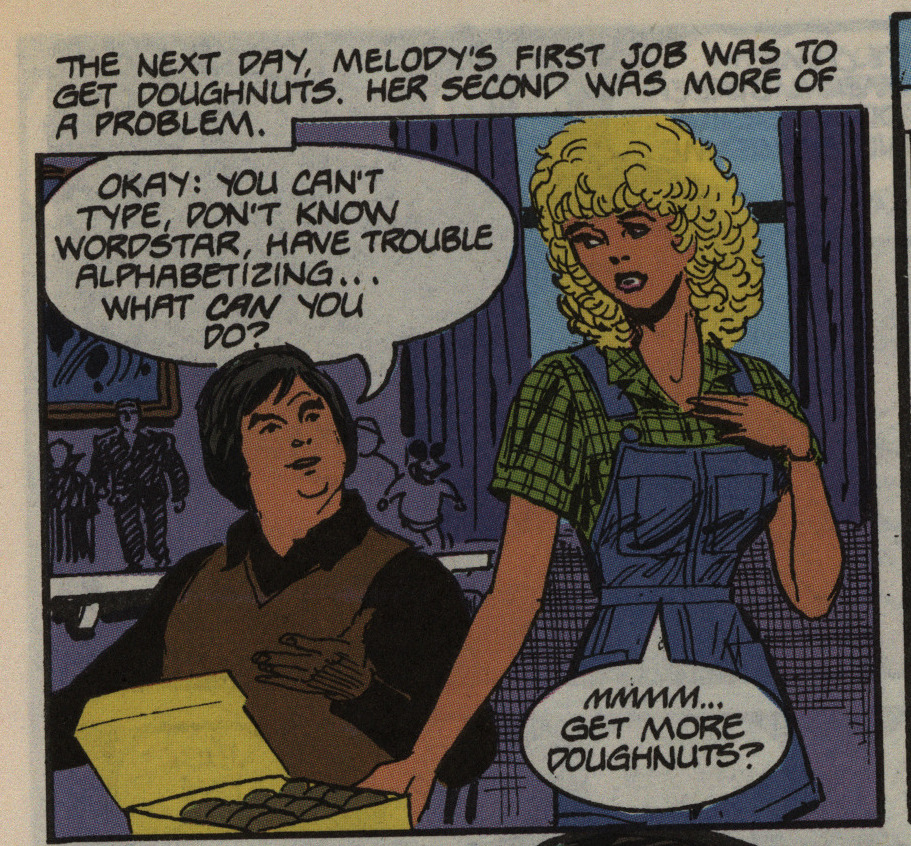 I don’t want to go on whining about Spiegle’s artwork, because I like his artwork, but some of these faces look like they’re doodles Spiegle’s been doing while he’s on the phone. 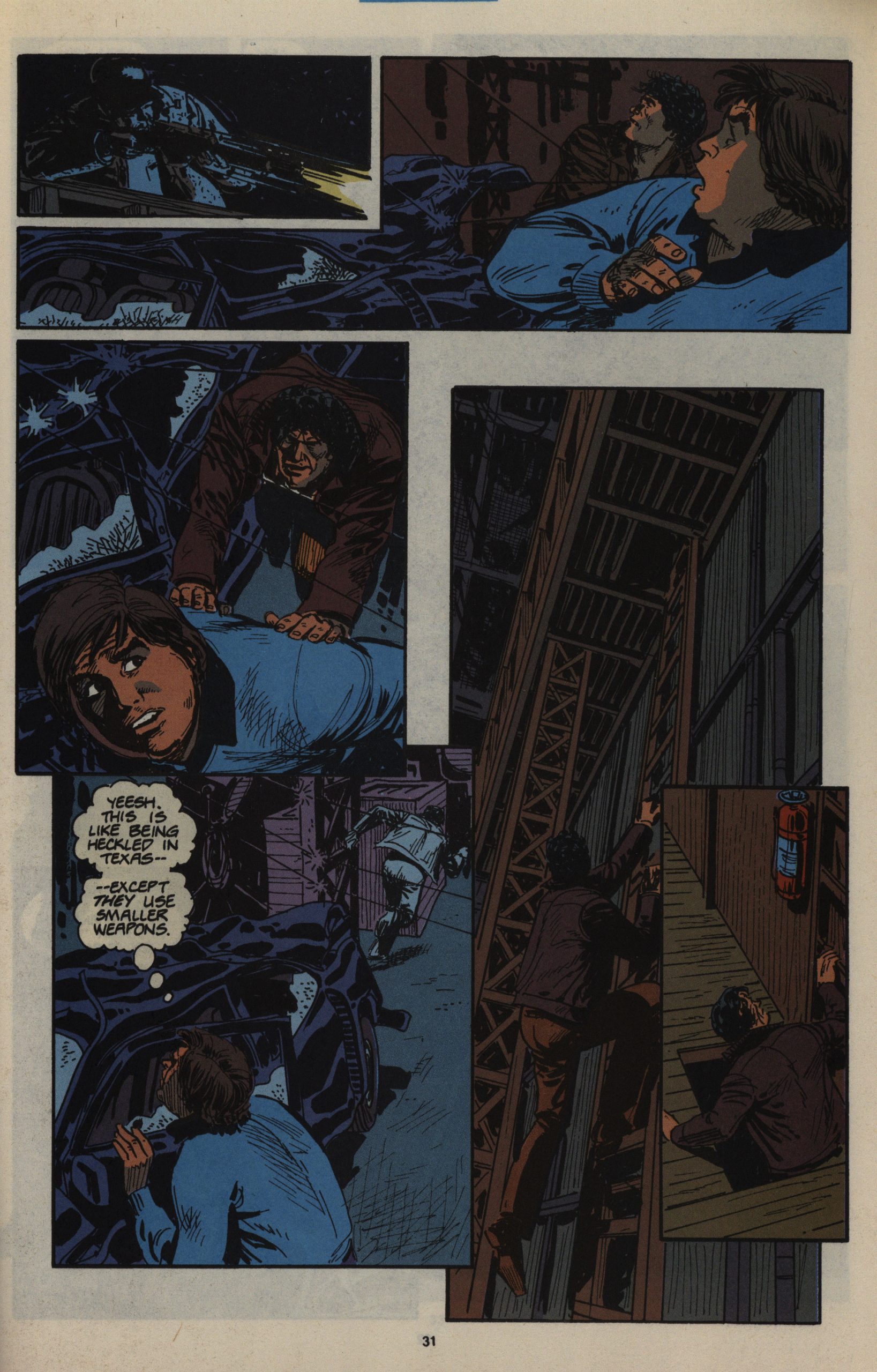 So… what’s the comic about, then, if it’s not Hollywood gossip?

Imagine Evanier in an elevator with a cigar-chomping exec.

Evanier: It’s about a comedian and a stunt-man, see. 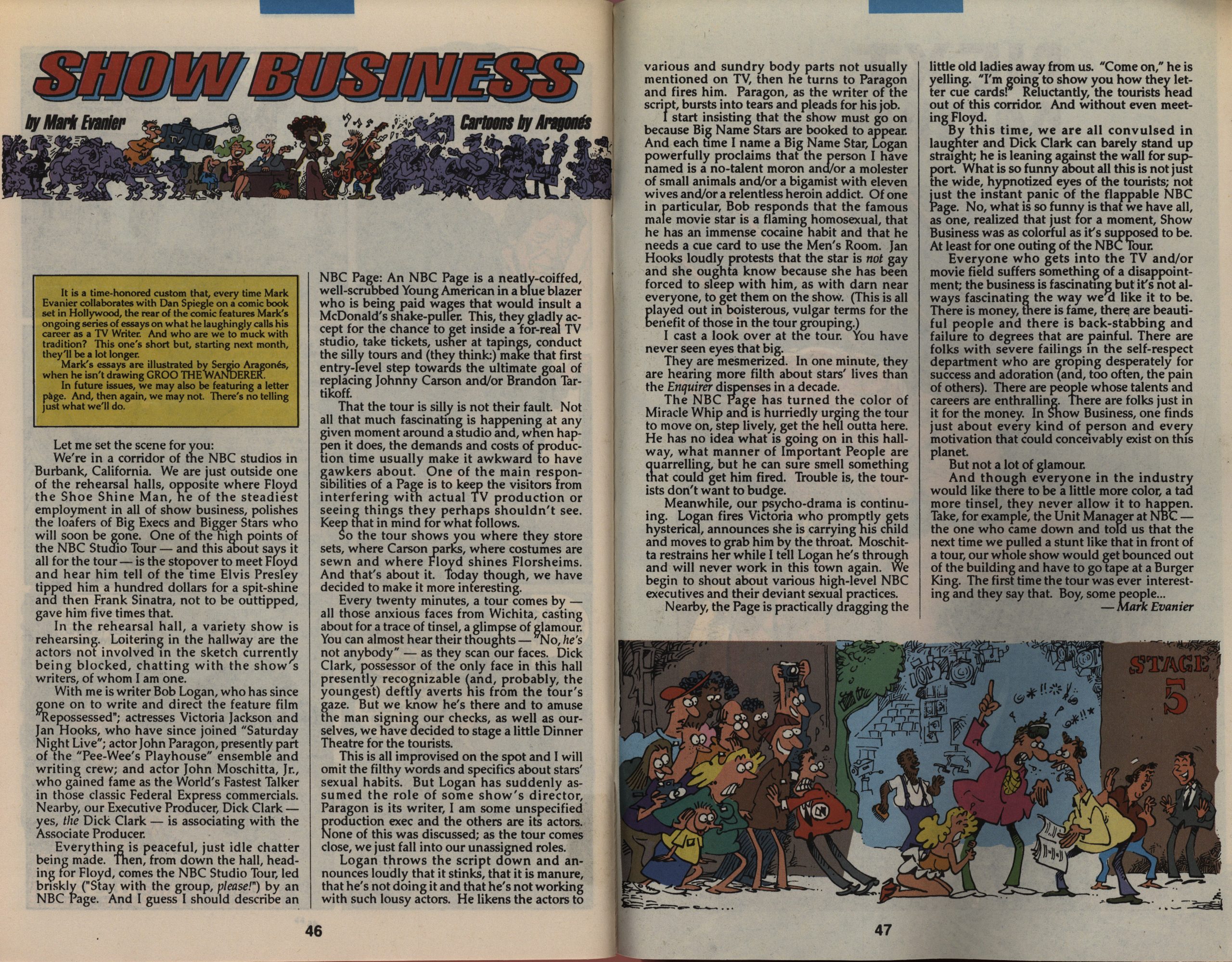 So it’s basically Crossfire all over again: There’s even the text pages of anecdotes the I remember fondly from Crossfire when I was a teenager.

The plots are amazingly hokey. In one of the stories, we have a woman who kills once per menstrual cycle. OK, now you’re all thinking that this has to be a parody of these kinds of TV shows, but I really don’t think so: It is one of those TV shows, but on paper. 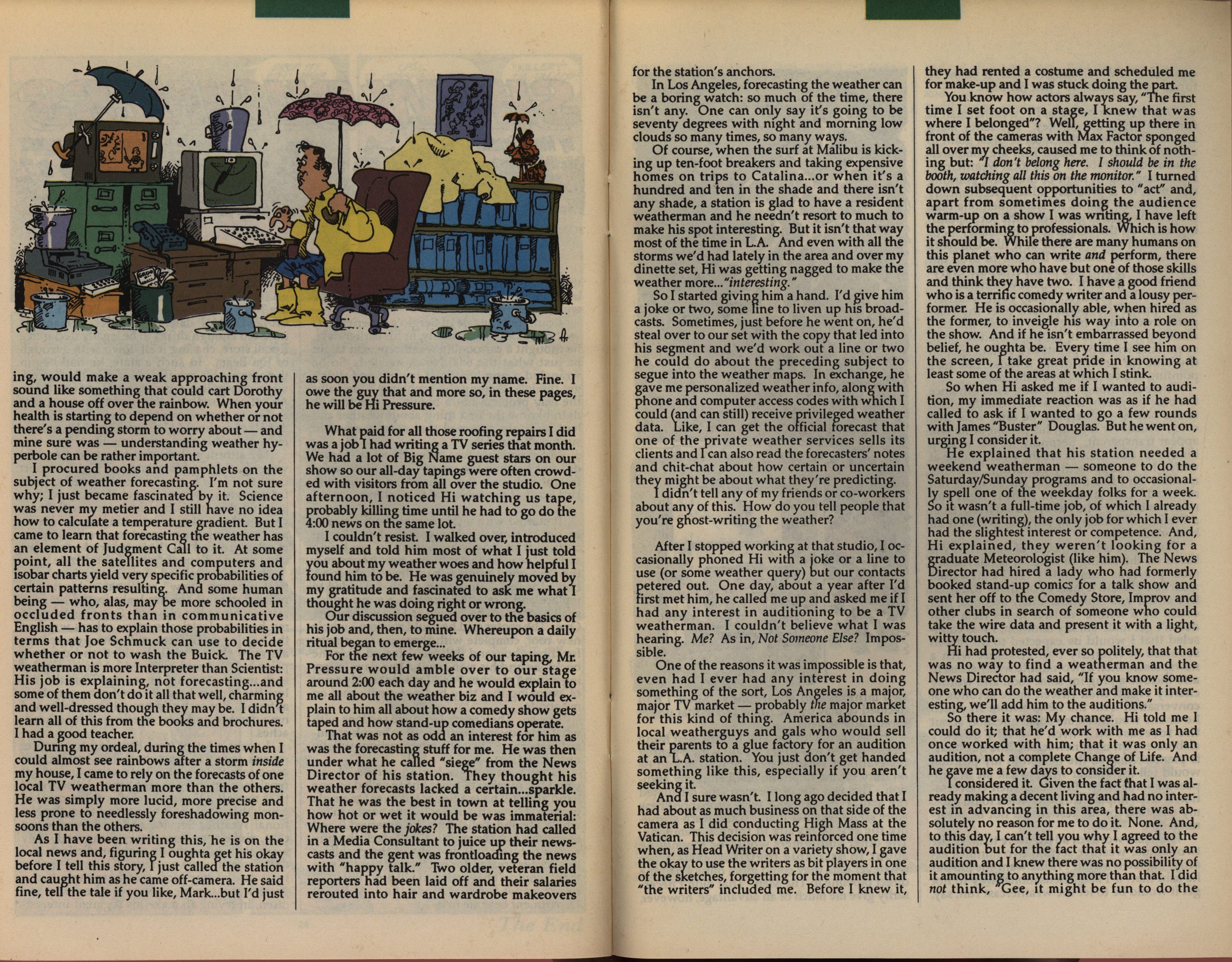 The first issue was 48 pages long (with over 40 story pages). The remaining four are 24 story pages and then about six pages of anecdotes. The anecdotes are pretty entertaining.

The storyline itself, though, is somewhat frustrating. It’s filled with all these hokey bits, and the characters don’t develop much beyond being stock characters. It’s not a horrible book or anything, but it seems slapdash and underdeveloped. 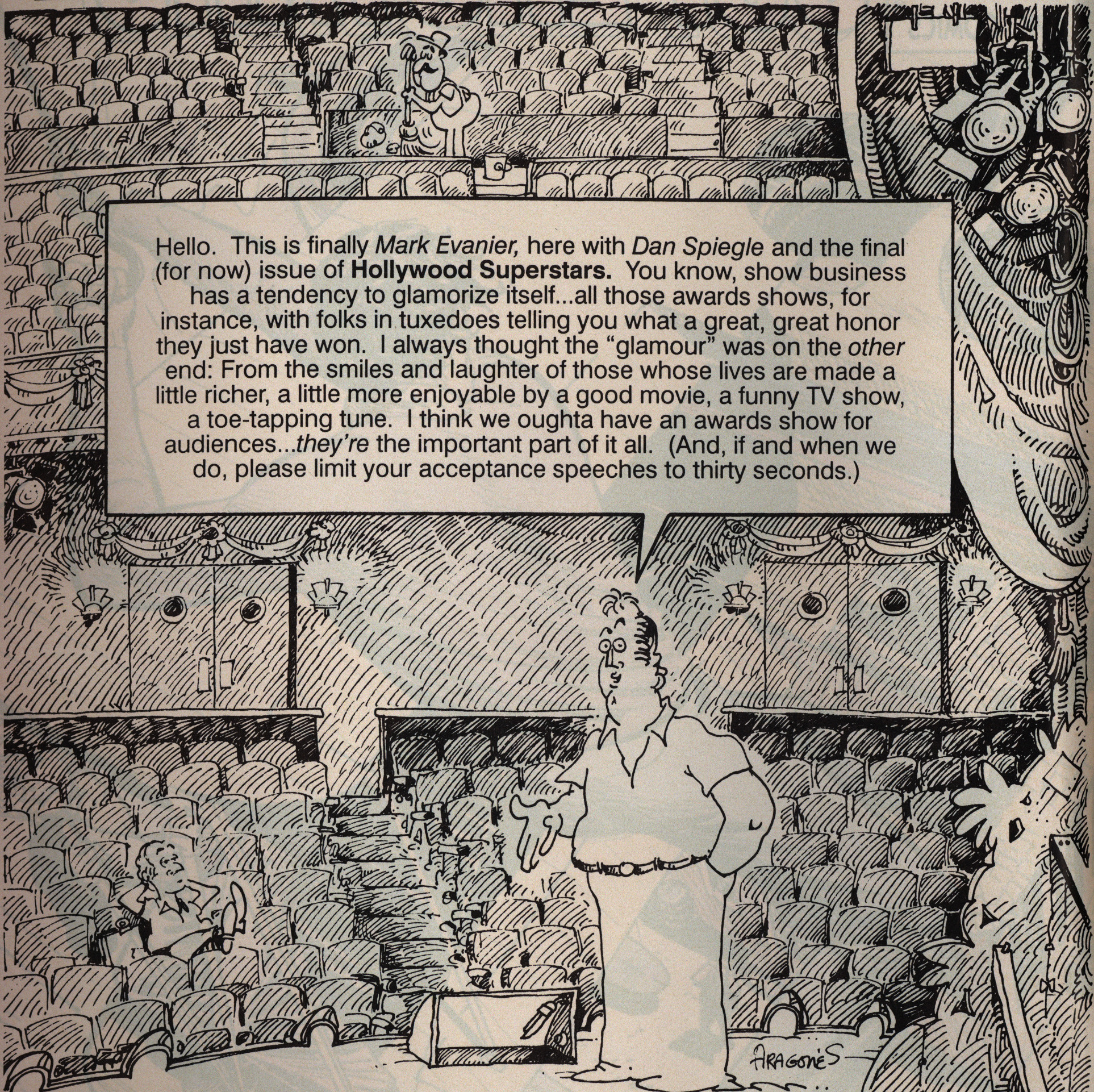 Evanier announces that the series has been cancelled (due to low sales, presumably). 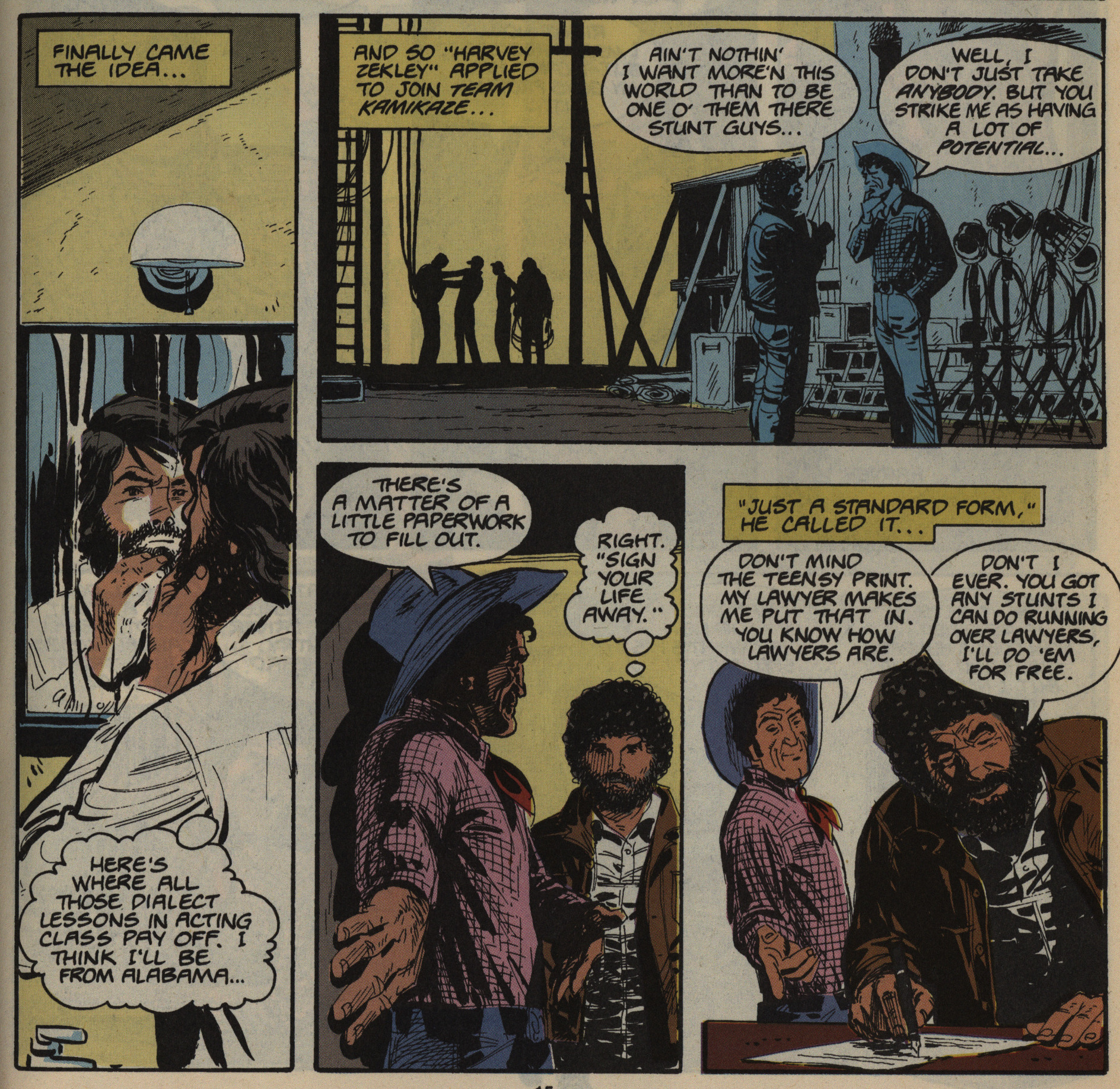 It just makes it feel like the first bit was pointlessly treading water.

Anyway, reading this was entertaining enough, but it’s a comic out of time: It would have been fine six years earlier, but things had moved on by 1990.

Ladies and gentlemen, compiled from
the offices of McPherson, McPher-
son, Lane and Crowe, the Top 10
Reasons to Buy Hollywood Superstars
10. You don’t really need that 10th
copy of Spider-Man #6.
9. No one draws real people like
Dan Spiegle.
8. No super-heroes!
7. Evanier’s text pages tell you more
about Hollywood than Entertainment
Tonight.
6. None of that pre-Crisis/post-
Crisis nonsense.
5. Thrills! spills! Chills!
4. That Groo’ll crack you up. (Oops,
wrong comic.)
3. Great plotting with no cookie-cut
comic book characters.
2. Do you want me to beg?
l. These guys did Blackhawk and
Crossfire’, what other reason do you
average American comic book.

Well, he certainly liked it.

A collected edition of the series was released by About Comics in 2014.

The stories are told in broad strokes with sometimes blunt humor and the occasional shower scene with one of the women. (Evanier says they were originally trying to target young women, thus the soap opera aspects, but visually, this book is aimed at the usual male audience.) I enjoyed the chance to read comics from a more innocent time. Everyone’s motivations were obvious, the bad guys eventually got what was coming to them, and there were plenty of jokes.

Reads like an ’80s TV show, but that’s not necessarily a bad thing. Dan Spiegle’s artwork is terrific and really suits the material.

Here’s an interview done with Evanier from around that time:

Last year, About Comics released “Hollywood Superstars,” which is an older series from you and Dan Spiegle. Could you talk a little about what it was and how the series started?

Well, I’d done this comic book with Dan Spiegle called “Crossfire” which we enjoyed doing very much and which attracted something of a following. As its publisher began having trouble getting paid by distributors and suffering other problems, the comic became unprofitable, so it stopped but a lot of people missed it. One was Archie Goodwin, who was then in charge of a whole division over at Marvel. He had an idea that Marvel could reach a new audience with a comic that had no superheroes, no fantasy elements, just drama. He wanted Dan and me to do such a book. We signed on to do “Hollywood Superstars” and then Archie left the company — and no one else there was interested in trying to attract that audience. So the comic didn’t last long.

He was the best editor in the business — when he didn’t leave the company. No, he was great. I did a couple of things with him and wish I’d done more.

The book portrays a very seedy side of show business and depicts people cutting costs and being unconcerned for the safety of extras and stuntmen. Was this your perspective of what was going on in Hollywood?

Yeah. I based everything on people I knew or had observed close up, especially one particular stunt coordinator who I thought was rather reckless with the lives of others.

Did you have a long term plan for the series?

Oh, yeah. I could have done that comic forever.

Yeah, it does read like a series that could have continued indefinitely.

I mean, it’s about a stand-up comic and a stunt man… who are private dicks… in Hollywood.

ADMIN NOTE: I’ll probably take a break from doing this blog, so there may be a lengthy pause after this blog post. I had meant to just blow through the final years of Epic Comics (I think I just have a bit more than one shortbox to read, after all; lots of very short series), but I’m putting the pause button now. I think. For a few weeks. Probably.