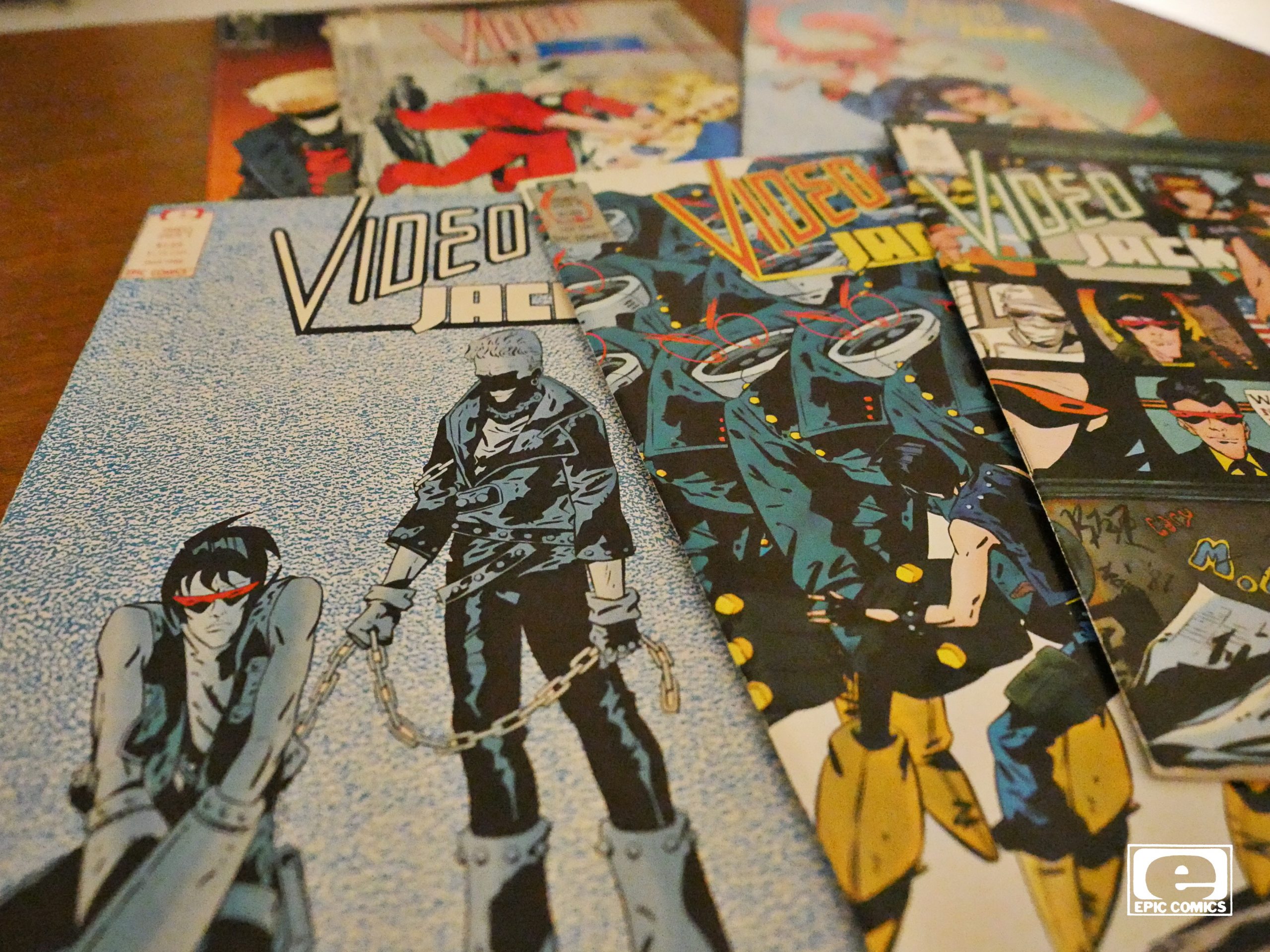 I’ve been a fan of Giffen ever since he started doing Muñoz, but this is a series that haven’t really appeared on my radar, for some reason. So I’m excited to read it now. 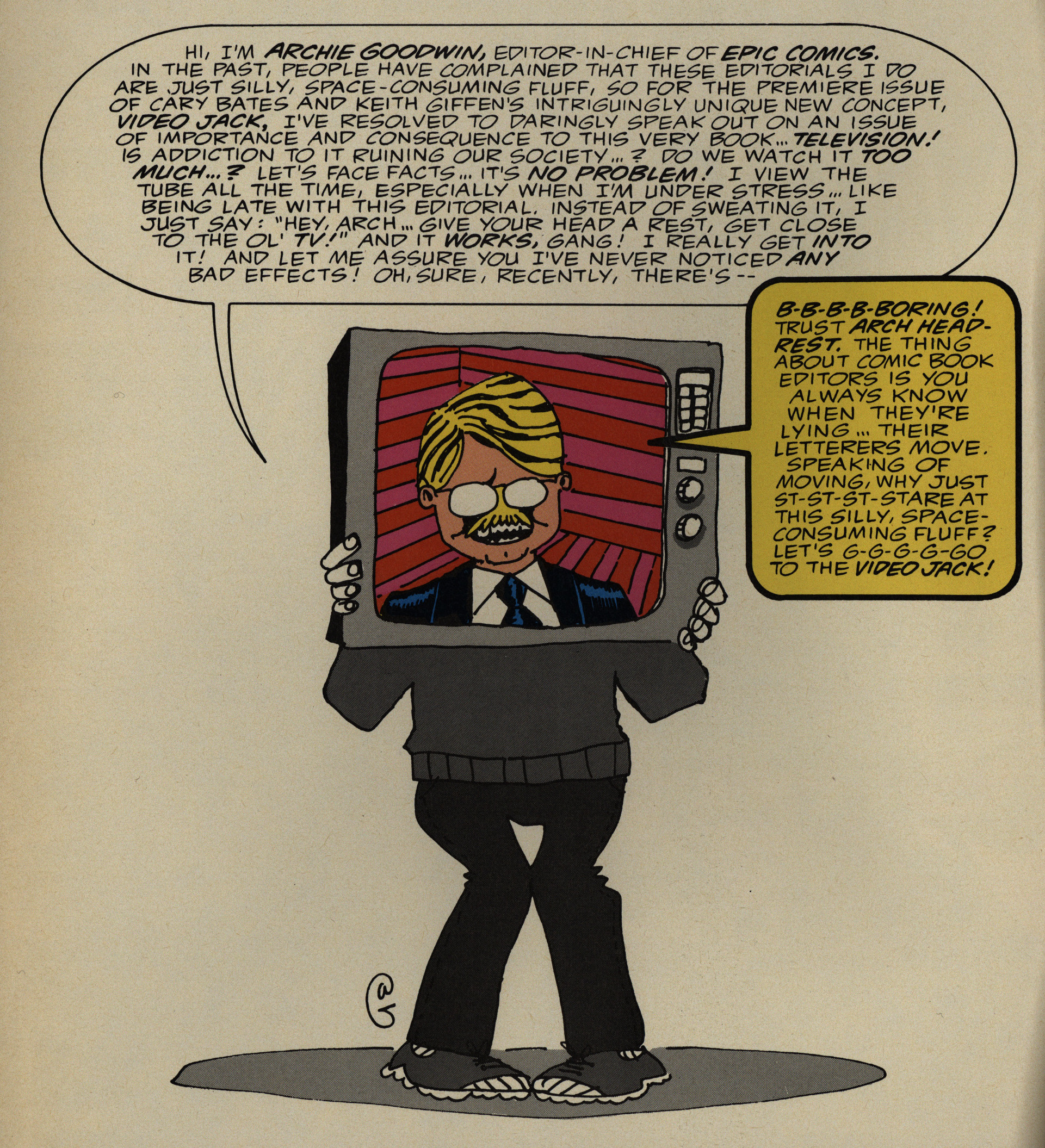 Goodwin says that Video Jack is a totally original concept… and then seems to imply that it’s a rip-off of Max Headroom.

The comic is printed on “mando” paper (as opposed to the usual totally white, thicker paper Epic was using for all their other titles), and it’s at a lower price point. So were they going for a slightly more mainstream audience with this book? 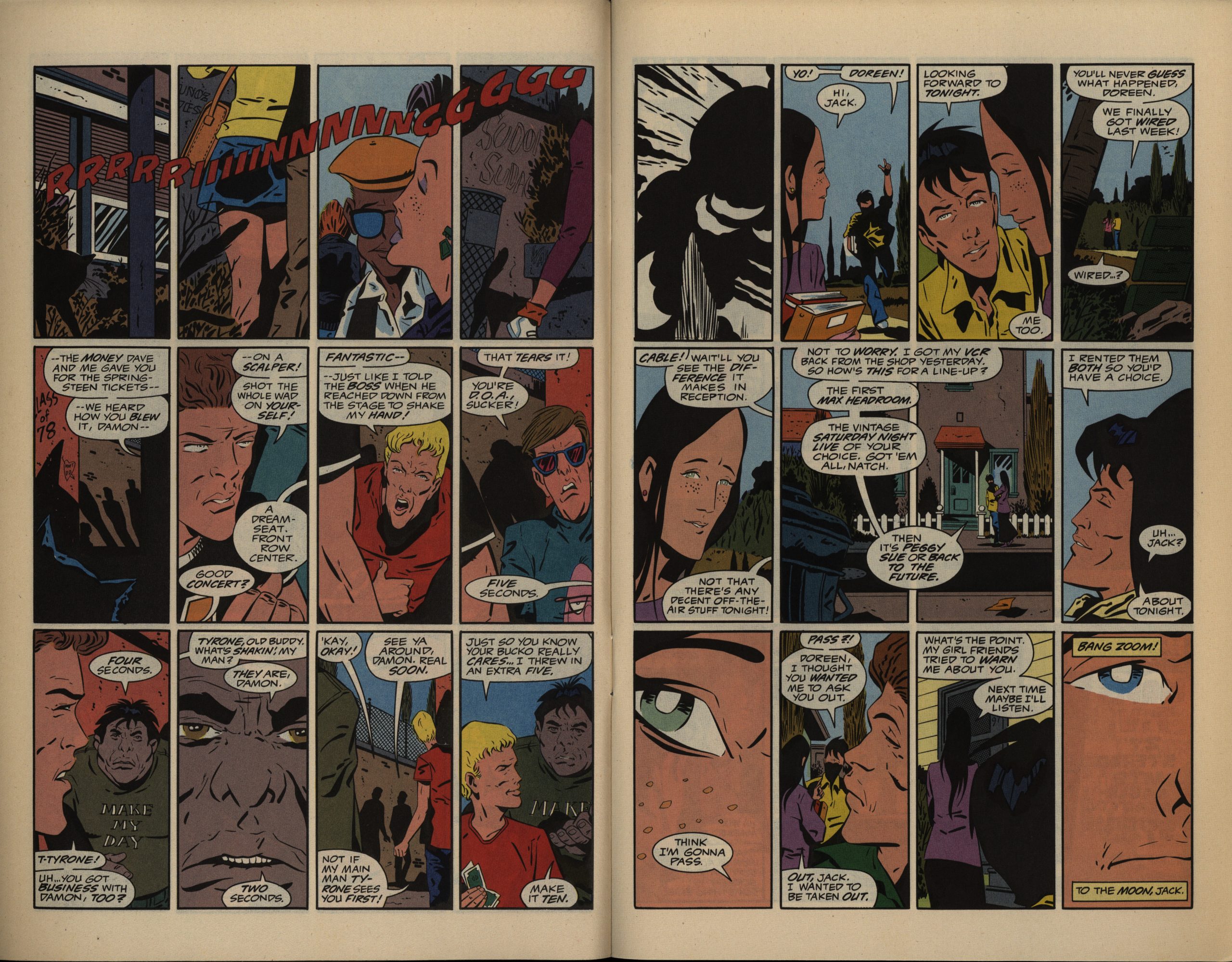 Oh, wow! This is prime Giffen! My guess is he took one look at Watchmen and said “pshaw! a nine panel grid? I’ll go three better!”

There’s nothing here I don’t love, from the pacing, to the slightly oblique storytelling, to the super-close-ups that are pleasantly befuddling, to that one panel in black-and-white that’s totally unexplained by you know is going to be explained later. 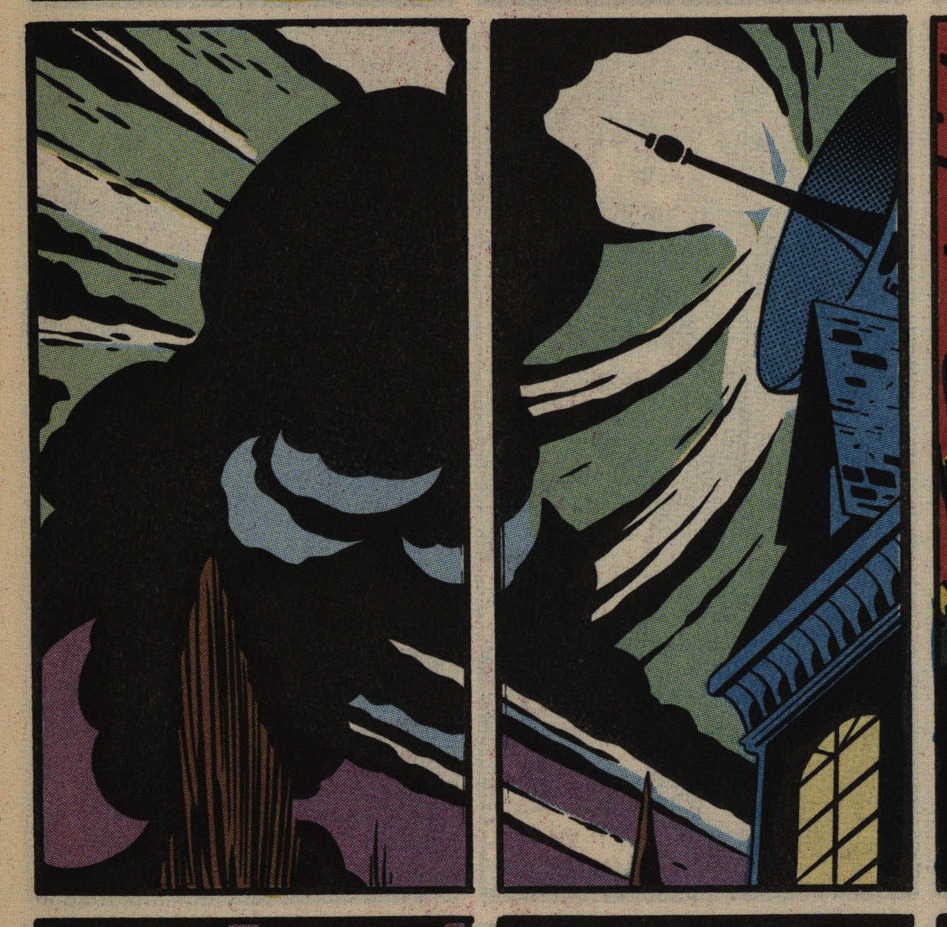 And indeed, some pages later… 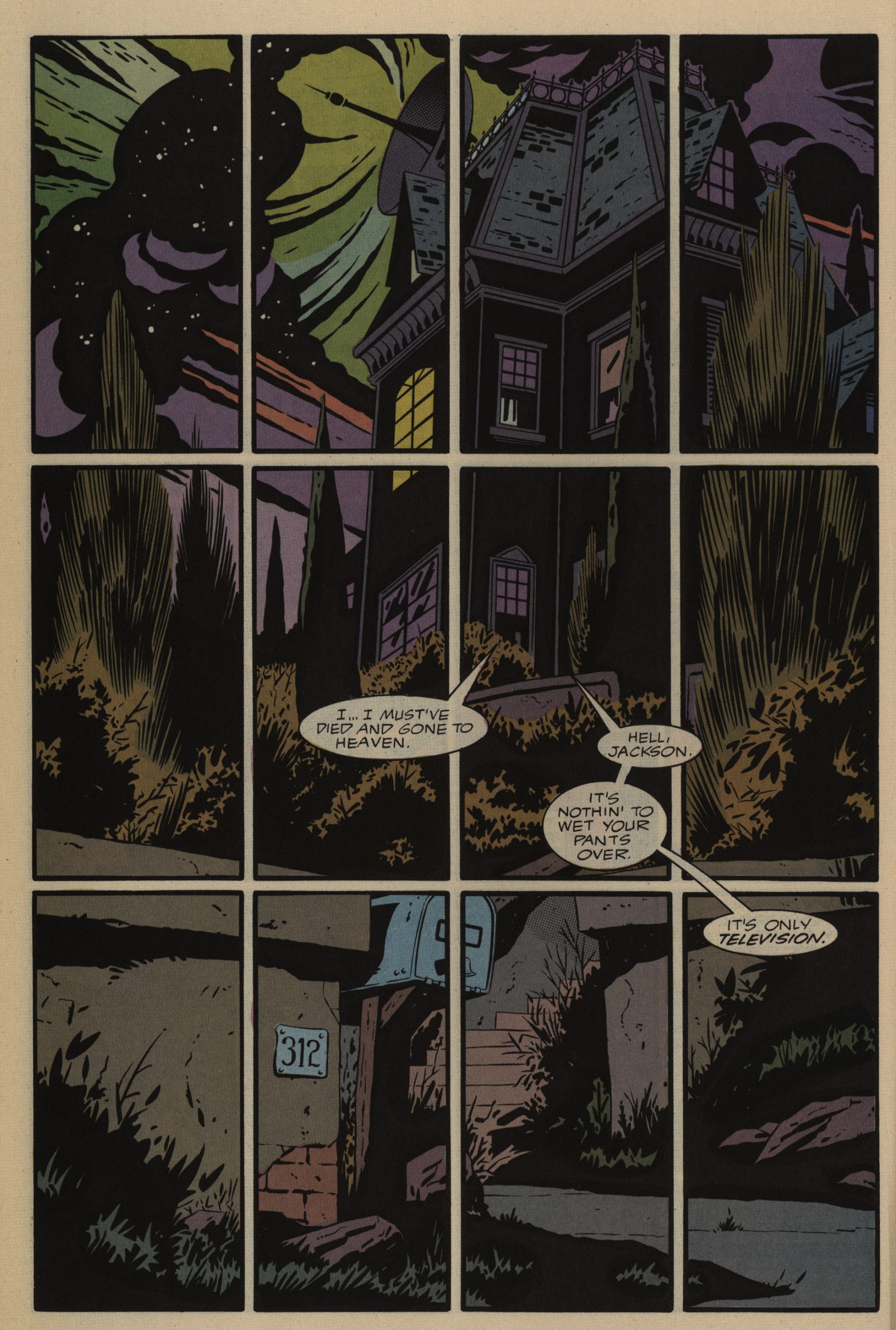 … and then the final reveal towards the end. Stuff like this just pickles me pink.

So we’ve got super-late-80s storytelling with all the trims and extras, but if the story’s lame, that’s not going to help much, is it? But the story’s also quite fascinating, with a huge cast to keep track of and a serial killer and ominous forebodings and stuff. I’m completely on board. 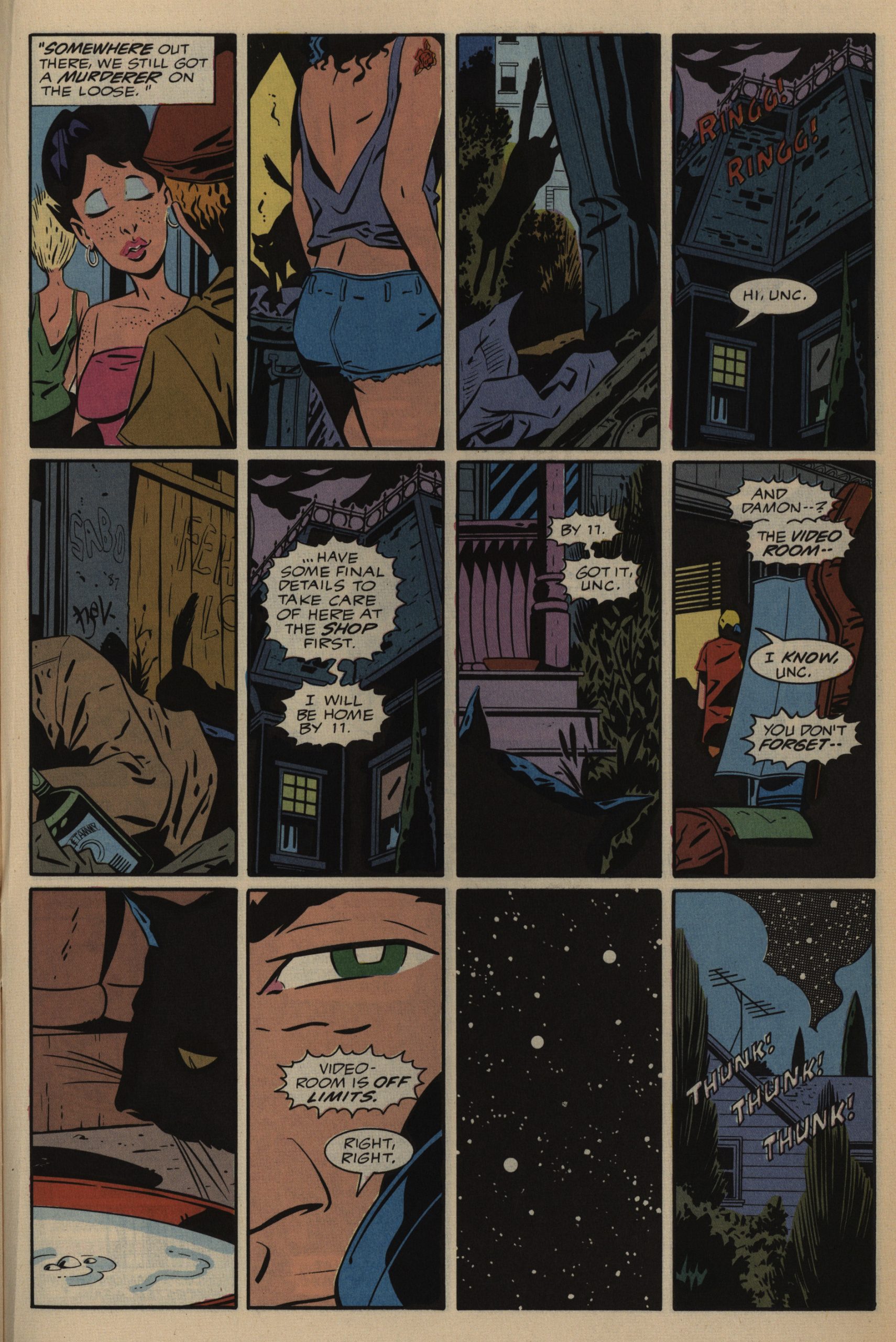 And there’s a cat! 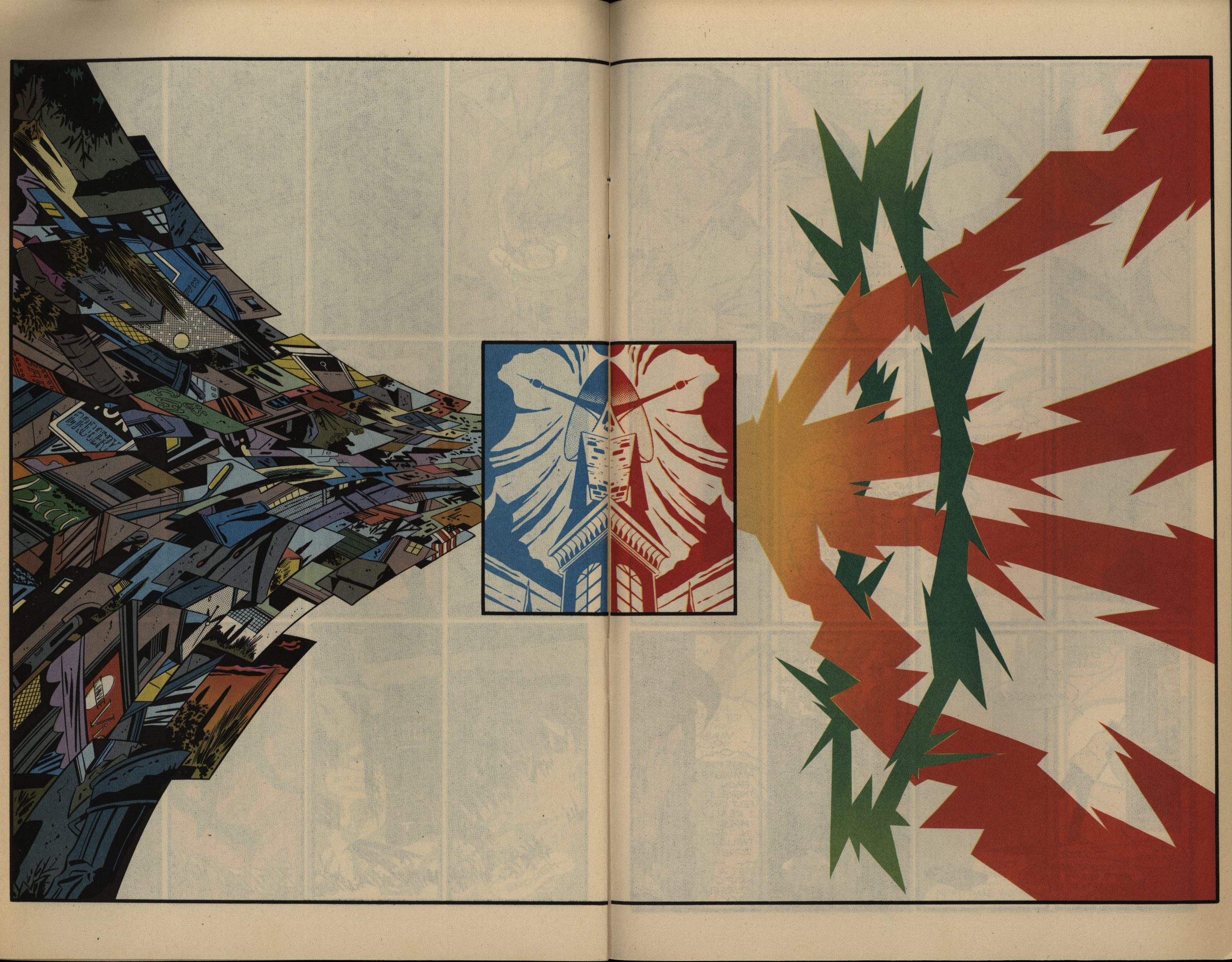 When Giffen finally deviates from the grid, it’s somehow not as cataclysmic as you’d want. Perhaps it’s because he did that full house just a couple of pages before? Or perhaps this is just a bit underwhelming in itself. 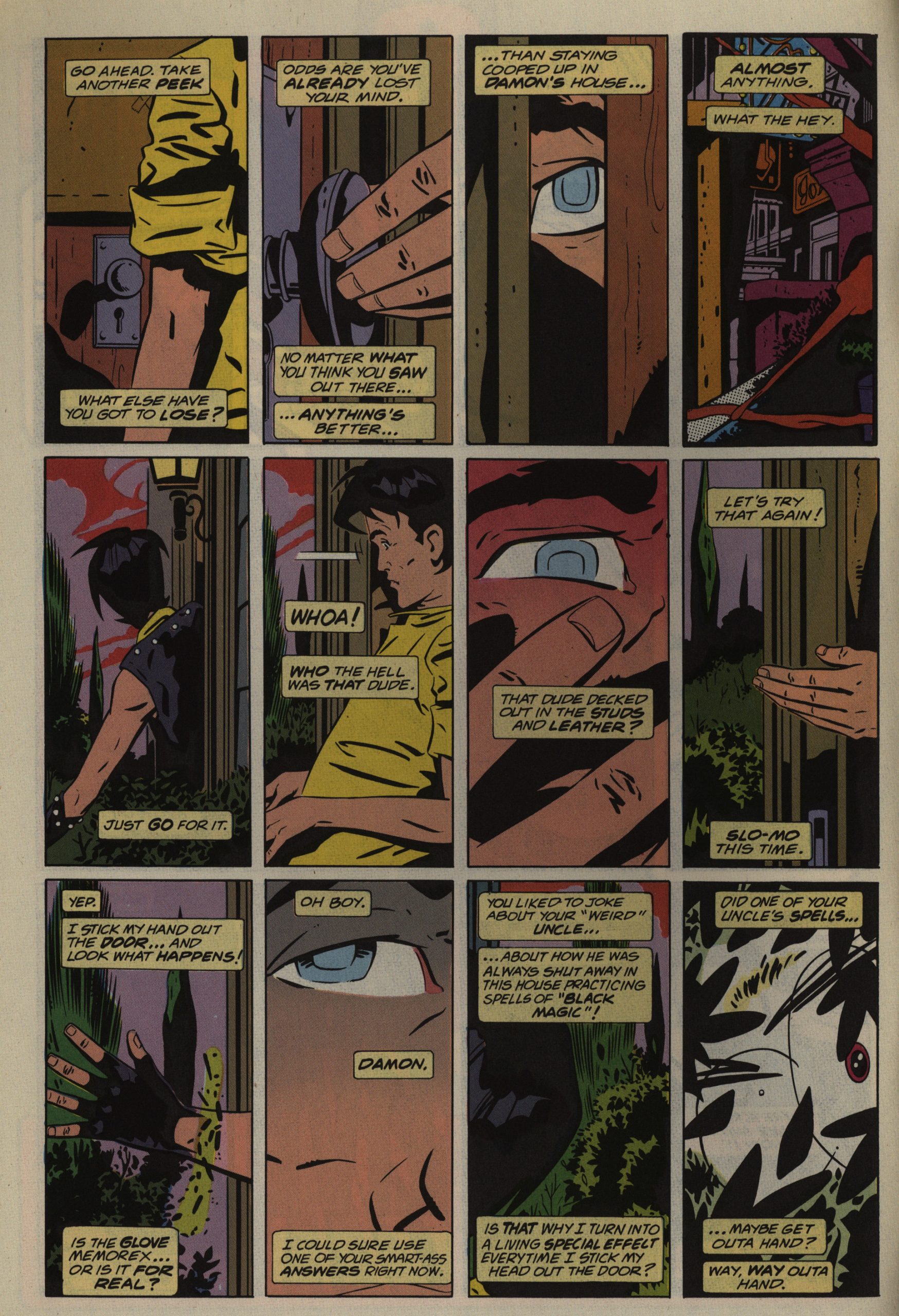 Yeah, that’s the plot, recapped in the second issue. It’s unfortunate that they’re doing these recaps, because it goes against the grain of the book. But, yes, they have a remote that lets them pop between various TV worlds. I’m pretty sure that’s been done both before and since? 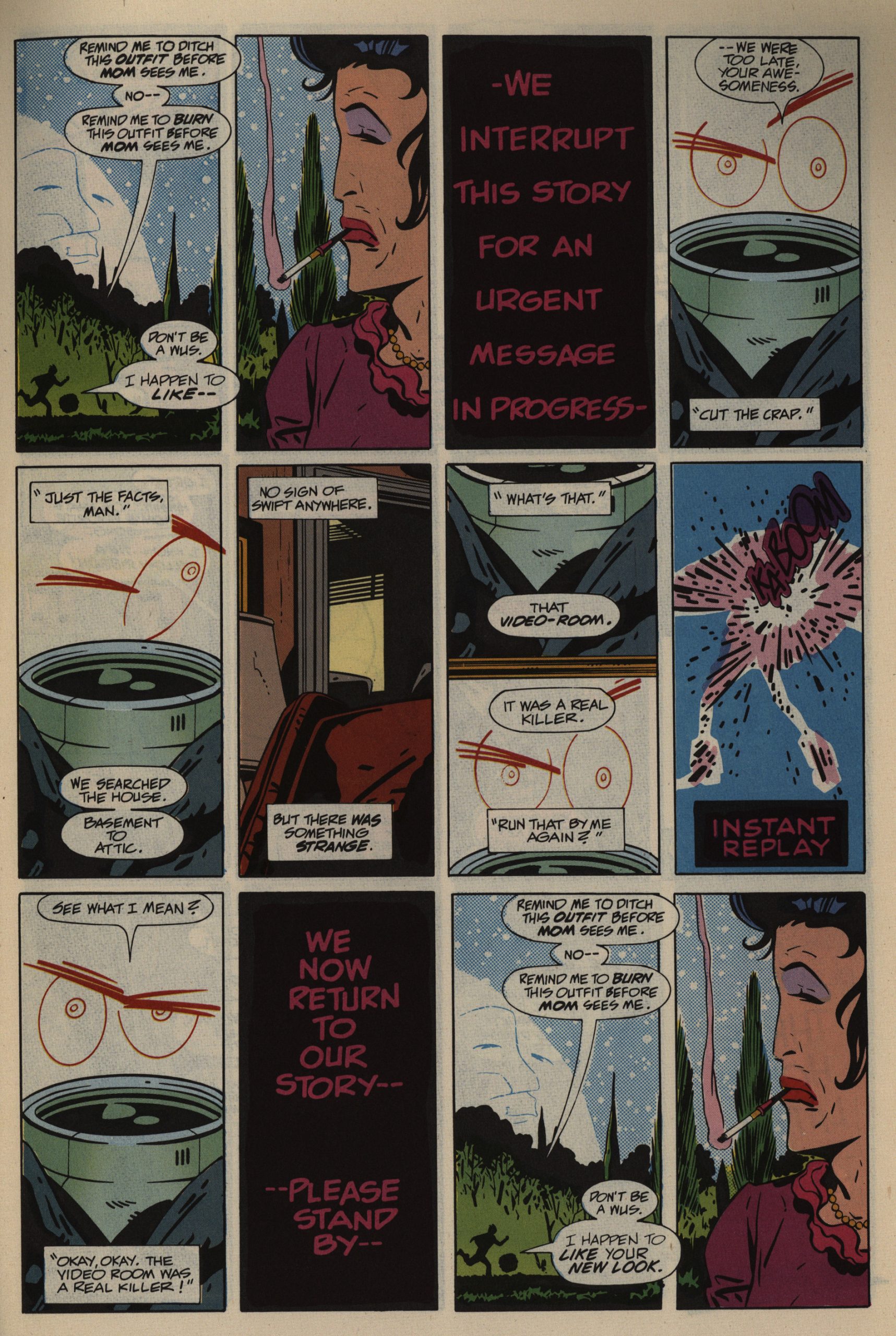 I love this stuff, and it feels like we have a story going that has some depth to it beyond the high concept. Conspiracies and secret organisations and stuff? Fun. 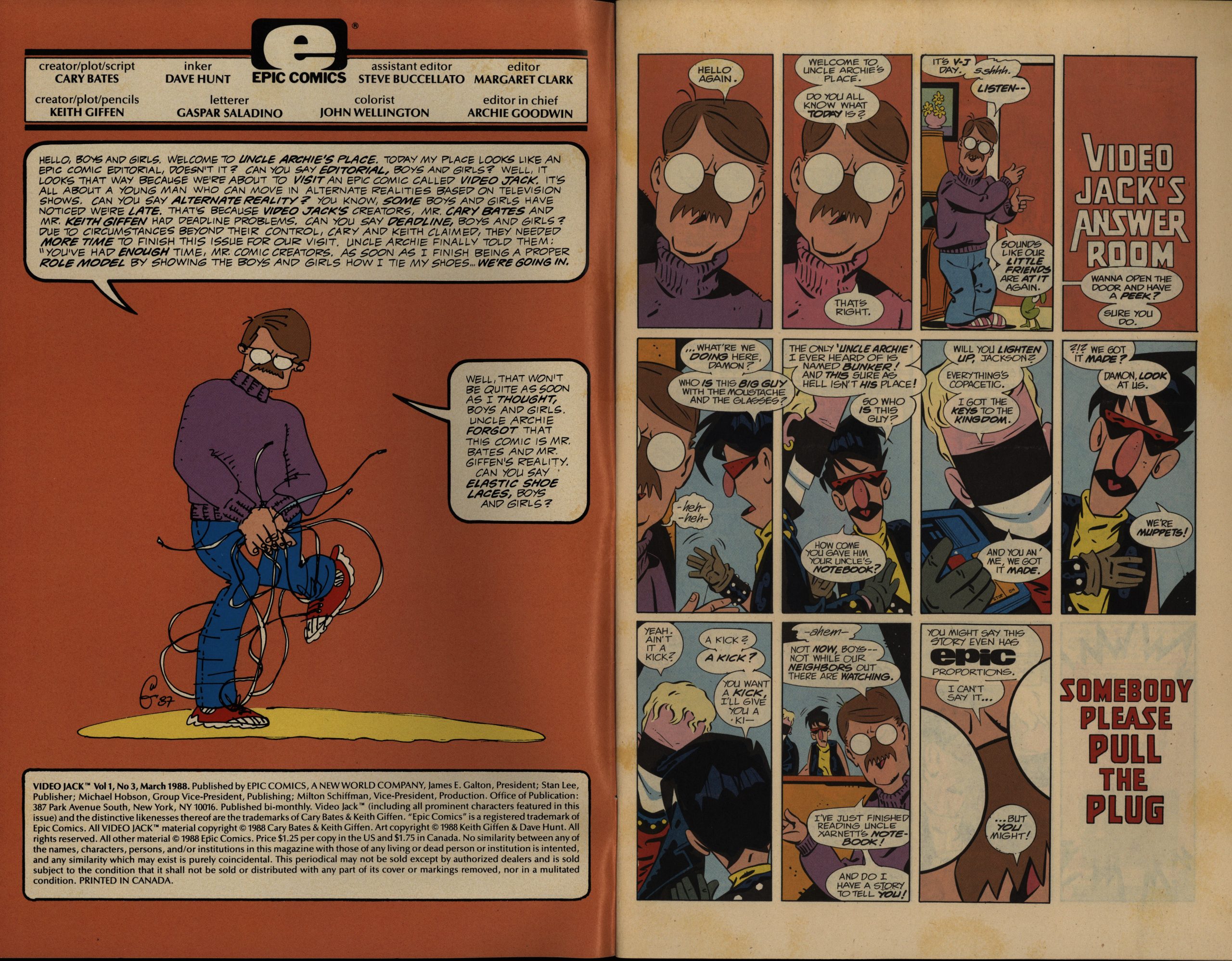 Video Jack is the only book that brings Goodwin’s cartoon editorials into the storyline (somewhat).

Oh, yeah, when they zap between different worlds they change to fit that world. 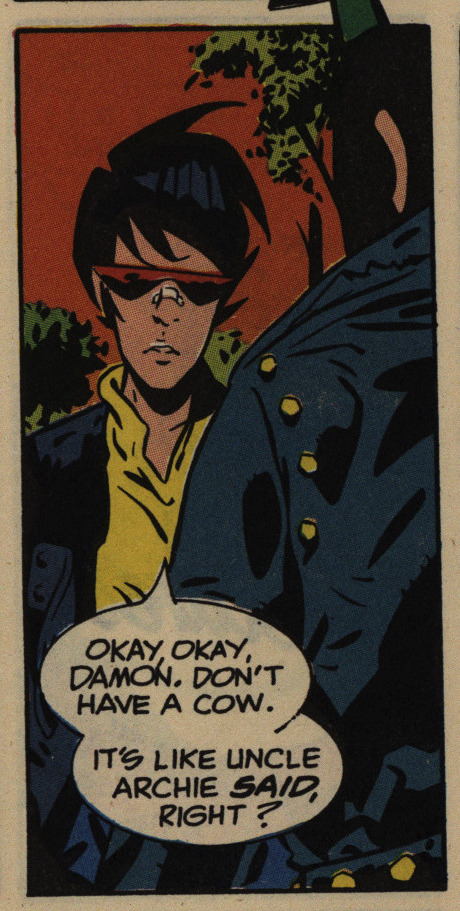 Don’t have a cow? Had The Simpsons started by then? Oh, yeah, started on the Tracey Ullman show in 1987… 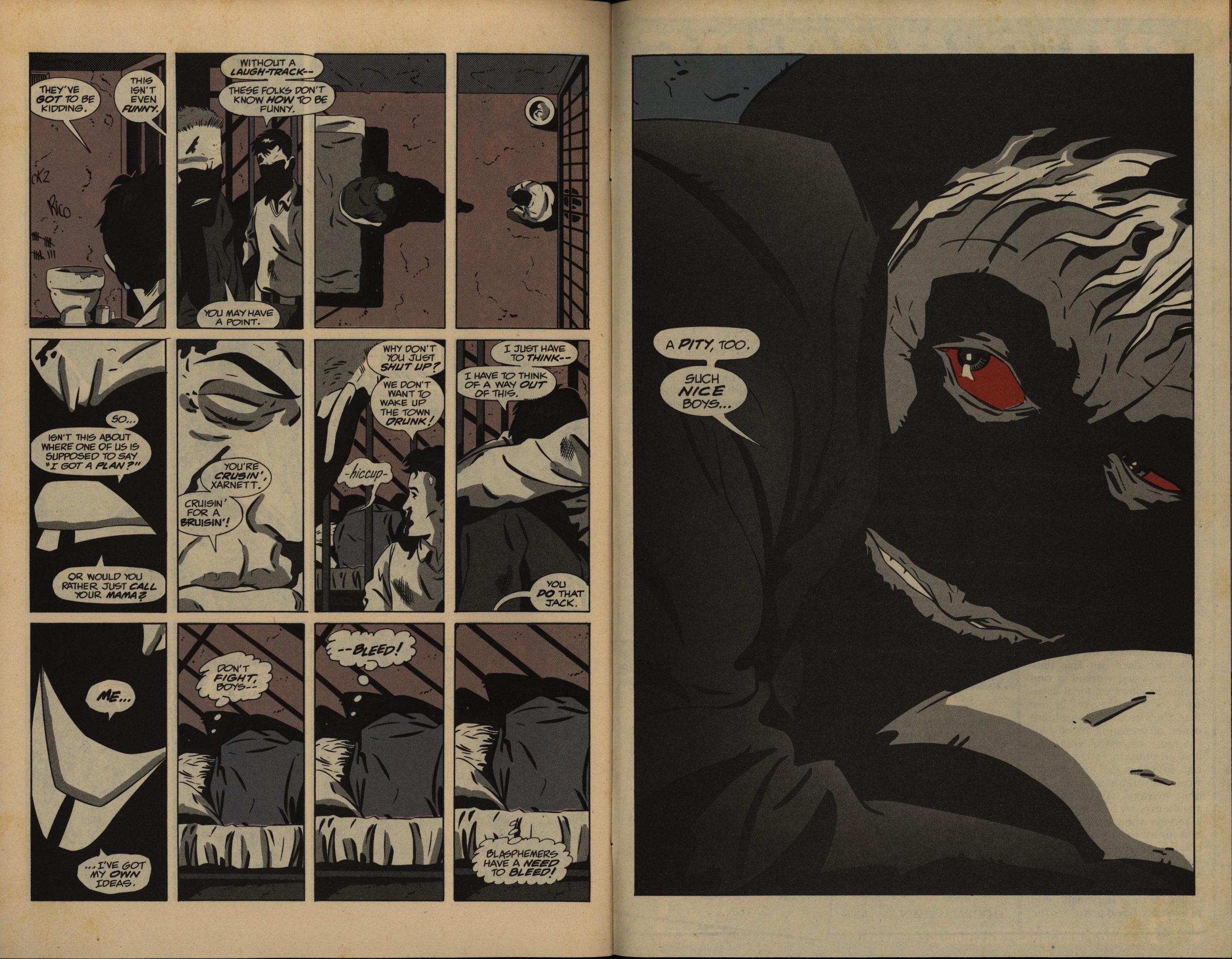 After a four month delay before the third issue, where they go to Andy Griffith World (I think; I’ve never seen it), it seems like we’re making progress with the serial killer sub-plot, too… 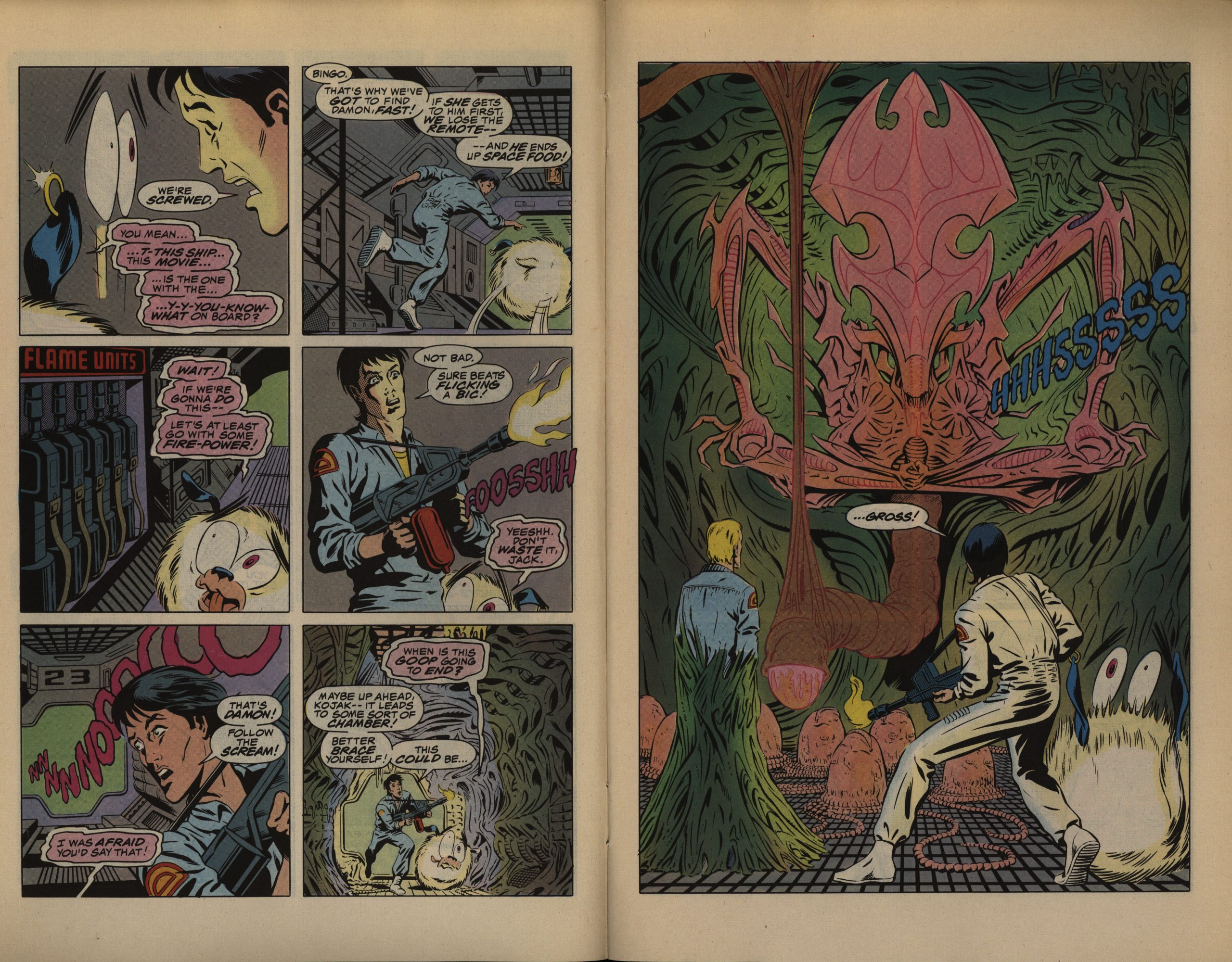 … but Giffen more or less disappears from the book by the fourth issue. Giffen was notorious for dropping out of projects back in the 80s, or being very late indeed, but I have no idea what happened here. We get a ton of guests artists filling in over the final three issues, and Giffen is still listed as co-plotter, but the tone changes completely, and the fill-in artists do not adhere to the twelve panel grid. They are all somewhat grid-ey, but use more traditional proportions to their panels. 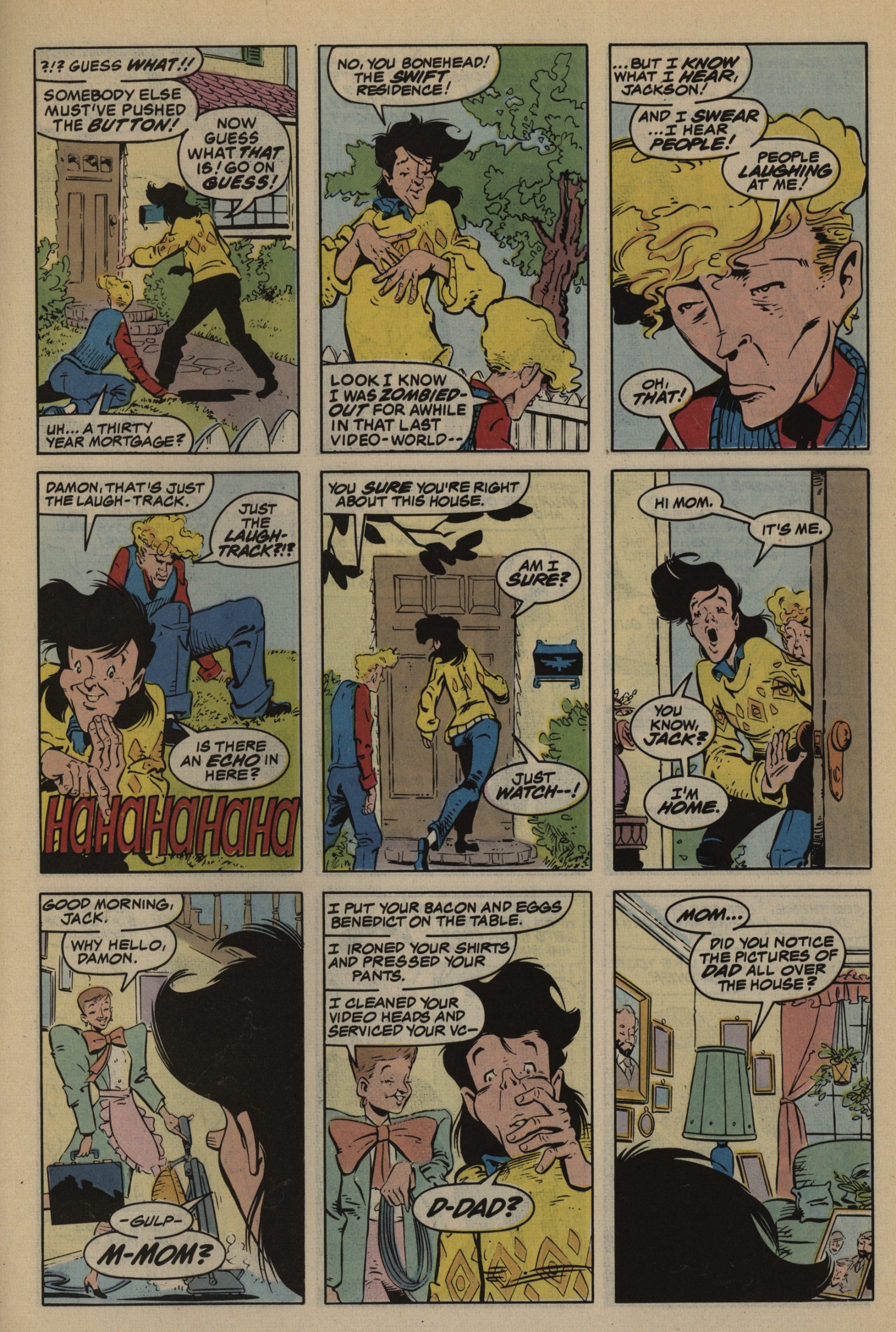 It’s not that there aren’t good pages here, like the DeStefano one, but we just get random TV shows, and there’s no plot development at all. Everything about the book that was fun: The paranoia, the plots, the oblique storytelling… it’s all gone. Instead they’re just filling pages without any rhyme or reason, which leads me to guess that Giffen isn’t involved with plotting any more, either. 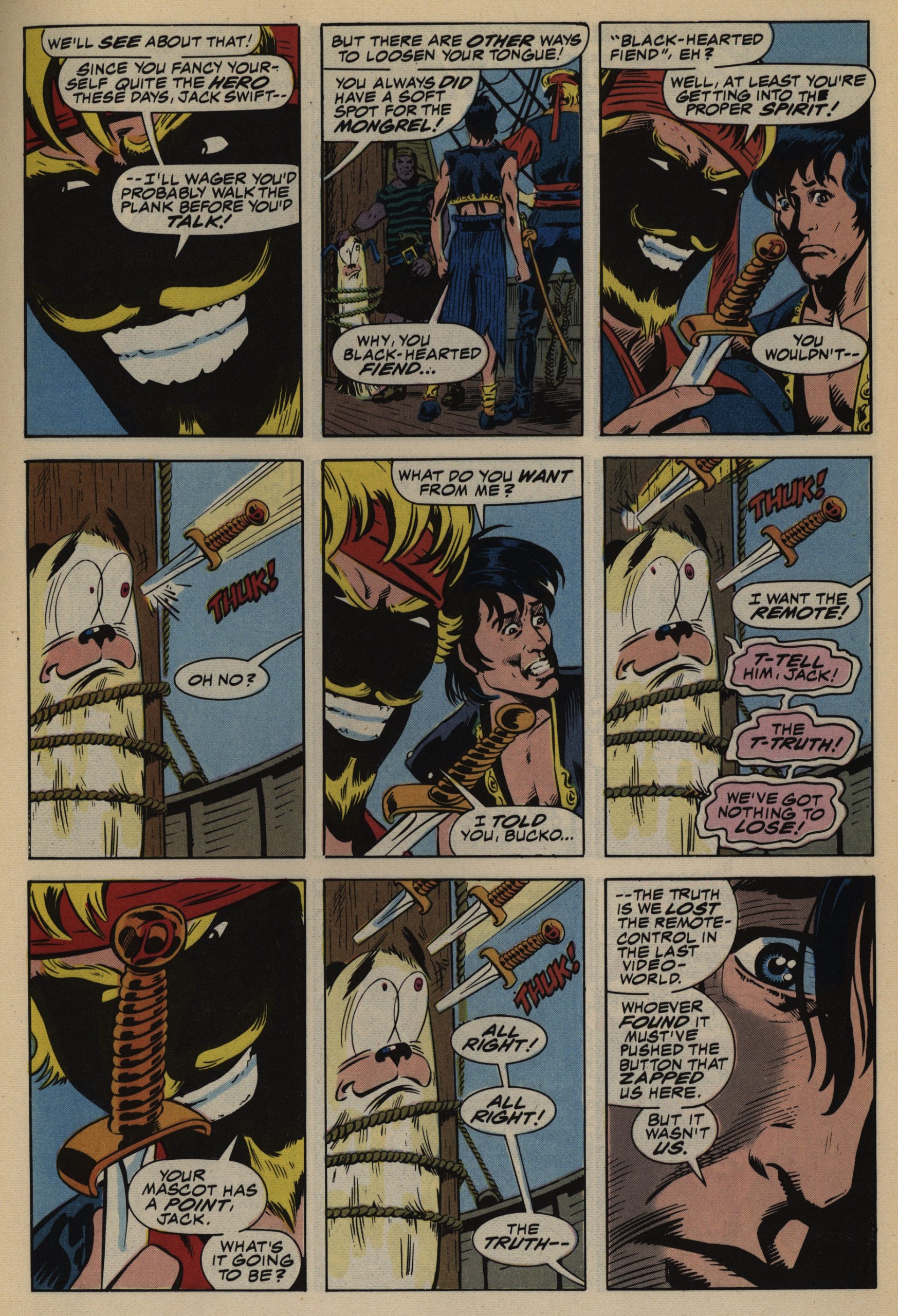 Everything’s off model by this point. Cary Bates worked for DC in the 60s and 70s, and it really shows. One of the TV worlds just had scene after scene like this: Uninspired “kooky” set pieces. It’s dreadfully done unless it’s actual 70s DC comics. And then we get to the final issue, where they bring in a bunch of different artists to really put a stake in the project. 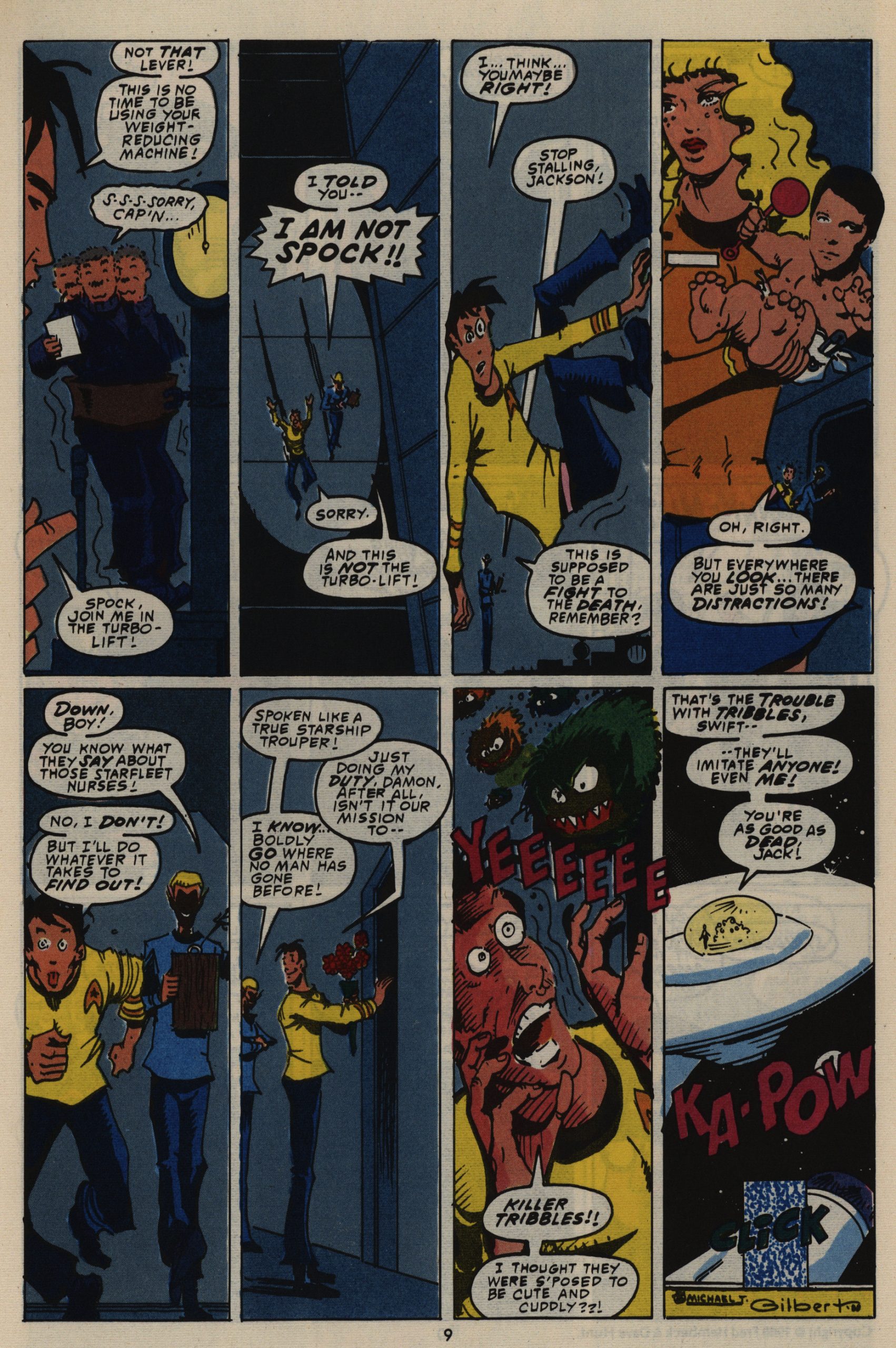 Michael T. Gilbert manages to get a few jokes in, at least. 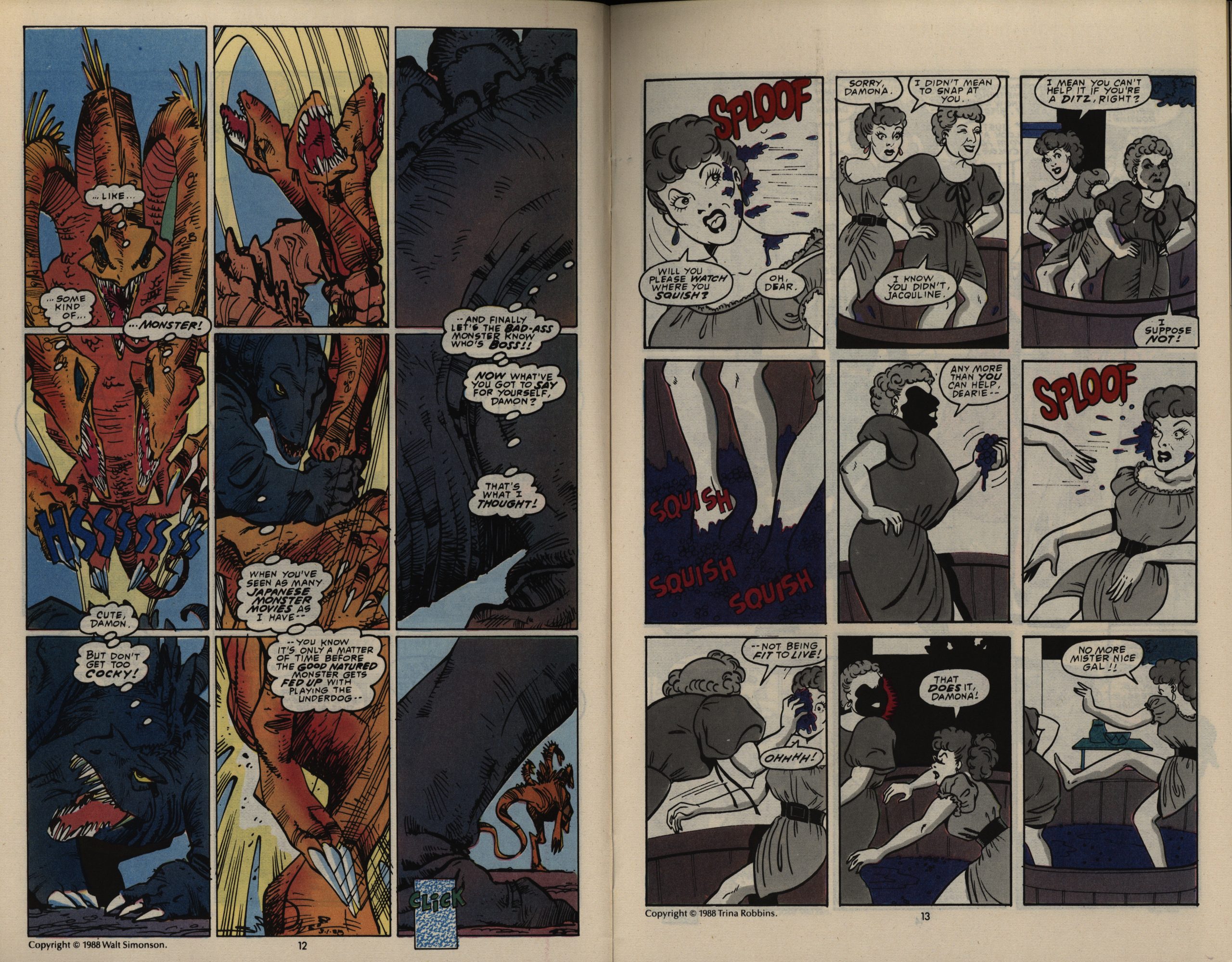 Walt Simonson draws some nice dinosaurs, but the only inspired piece is by Trina Robbins, where they zap into I Love Lucy World. 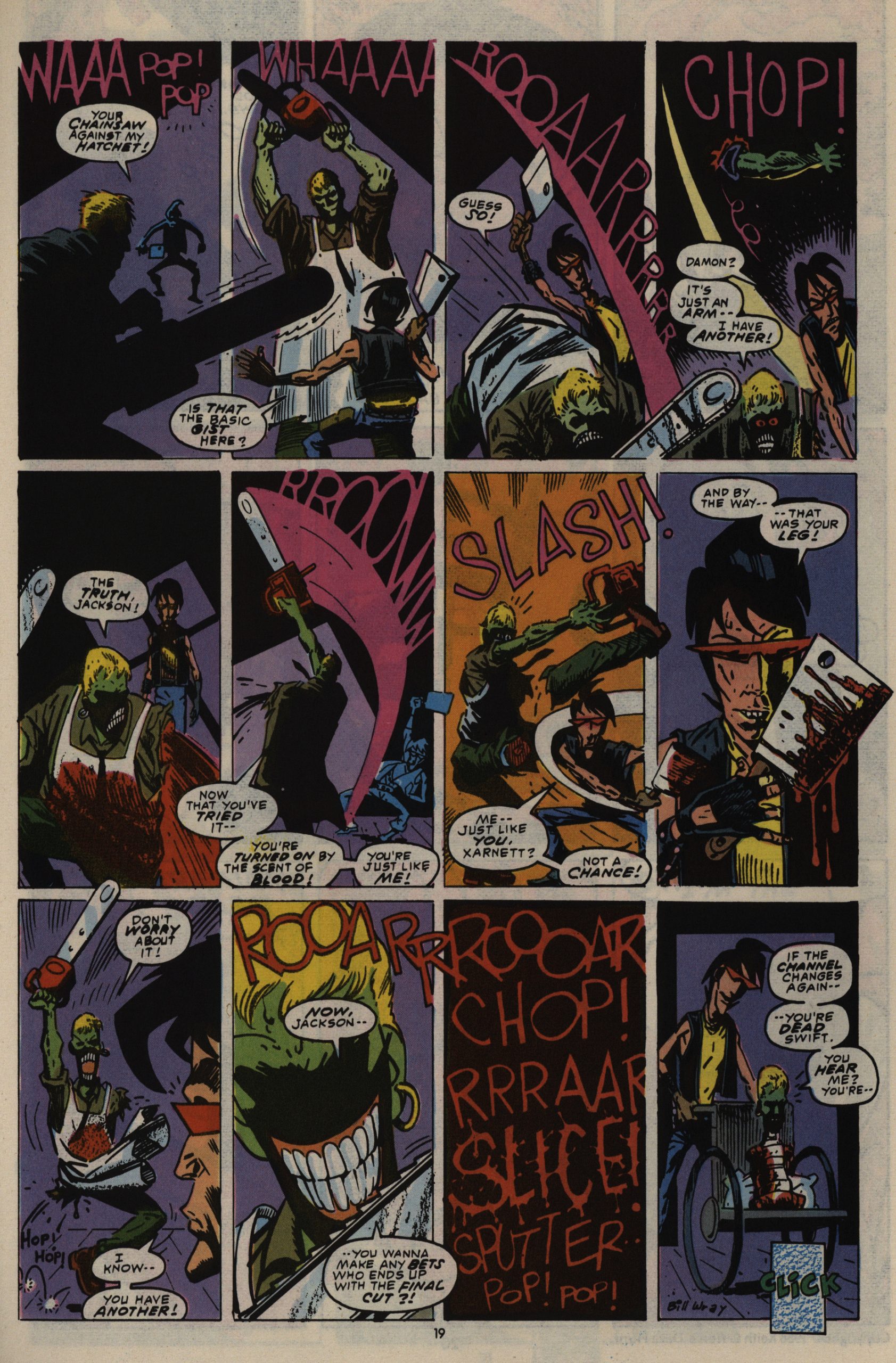 And finally, somebody does the Giffen grid (it’s Bill Wray).

And then they tie up the main plot threads and forget all about the other stuff they had going in the first three issues and call it a day.

What a squandered series: They had something fresh, fun and intriguing going in the first three issues, and then… nothing.

Starting with issue #4, if plans work
out, says editor Margaret Clark, a
different artist will render each of the
video realities. Issue #5 will see an
increasing number of realities. And #6
will be the all-out battle between Jack
and Damon for the remote control,
featuring a whole series of channel
changes, producing a multitudeof videc
realities, each losting only a page or two,
Artists were being lined up at press time,
but Clark wasn’t prepared to announce
names yet.
The series has an option for another
six issues if sales support it, says Clark,
so there is a possibility the story will not
be resolved in #6, but instead be con-
tinued through to #12.

Well, that’s one way of spinning “Giffen is leaving the book”, I guess. “If plans work out”.

I was unable to find any contemporaneous reviews of the book, and it has never been reprinted (for obvious reasons, I’d say).

But here’s a review:

All in all, I can appreciate what Bates & Giffen were trying to do with Video Jack; they had a fun concept that allowed them to tell stories that varied dramatically depending on what genre the remote control sent the characters to. At the same time, six issues was probably a good duration for the series, and much longer would have gotten repetitive. The characters and setting didn’t have enough depth to force the reader to demand more. I imagine sales on this weren’t particularly high, given its somewhat opaque nature and delays in coming out, but it was an interesting experiment that at least told a complete story.

Noteworthy: although these comics were published five years after the first Epic Comic came out, this title had the lowest cover price of any Epic series.

I guess there isn’t too much chatter about this series around dem webs, even if Giffen is kinda a big deal…