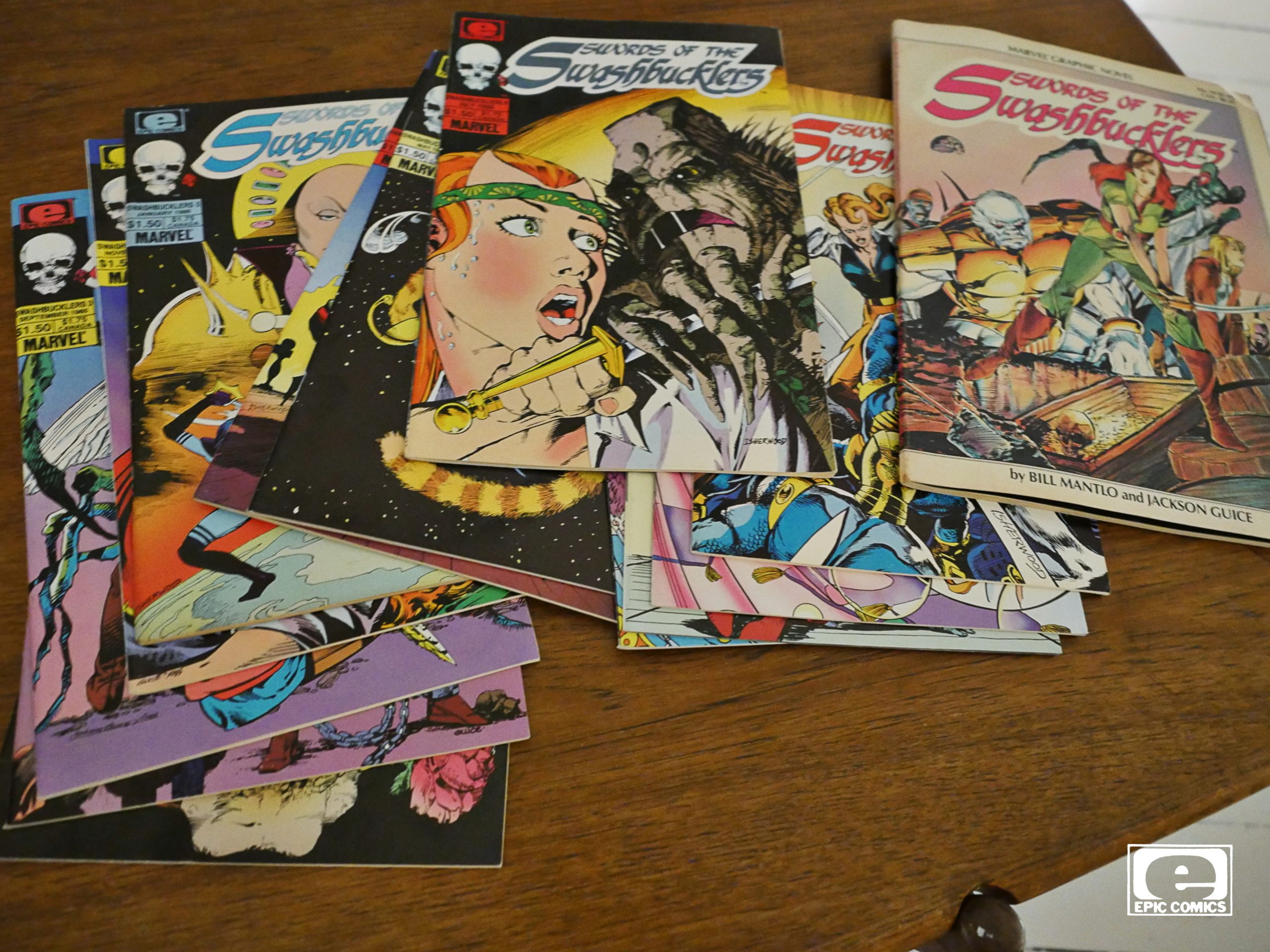 Swords of the Swashbucklers (1985) #1-12
by Bill Mantlo, Jackson Guice and a whole bunch of people

This is a shockingly bad comic, and that surprised me. Bill Mantlo had done a large number of not-bad super-hero comics, and Jackson Guice (nee Butch) was an above-average mainstream comics artist. But this was a chore to get through; by far the worst one yet. So be prepared for one of those tedious “man shouts at old comic nobody has heard of” posts. So Mantlo’s main approach is to have the characters explain at each other what they obviously must already know. It’s an well-known approach, but that doesn’t make it any better. Guice looks like he’s in it to draw some porny poses. 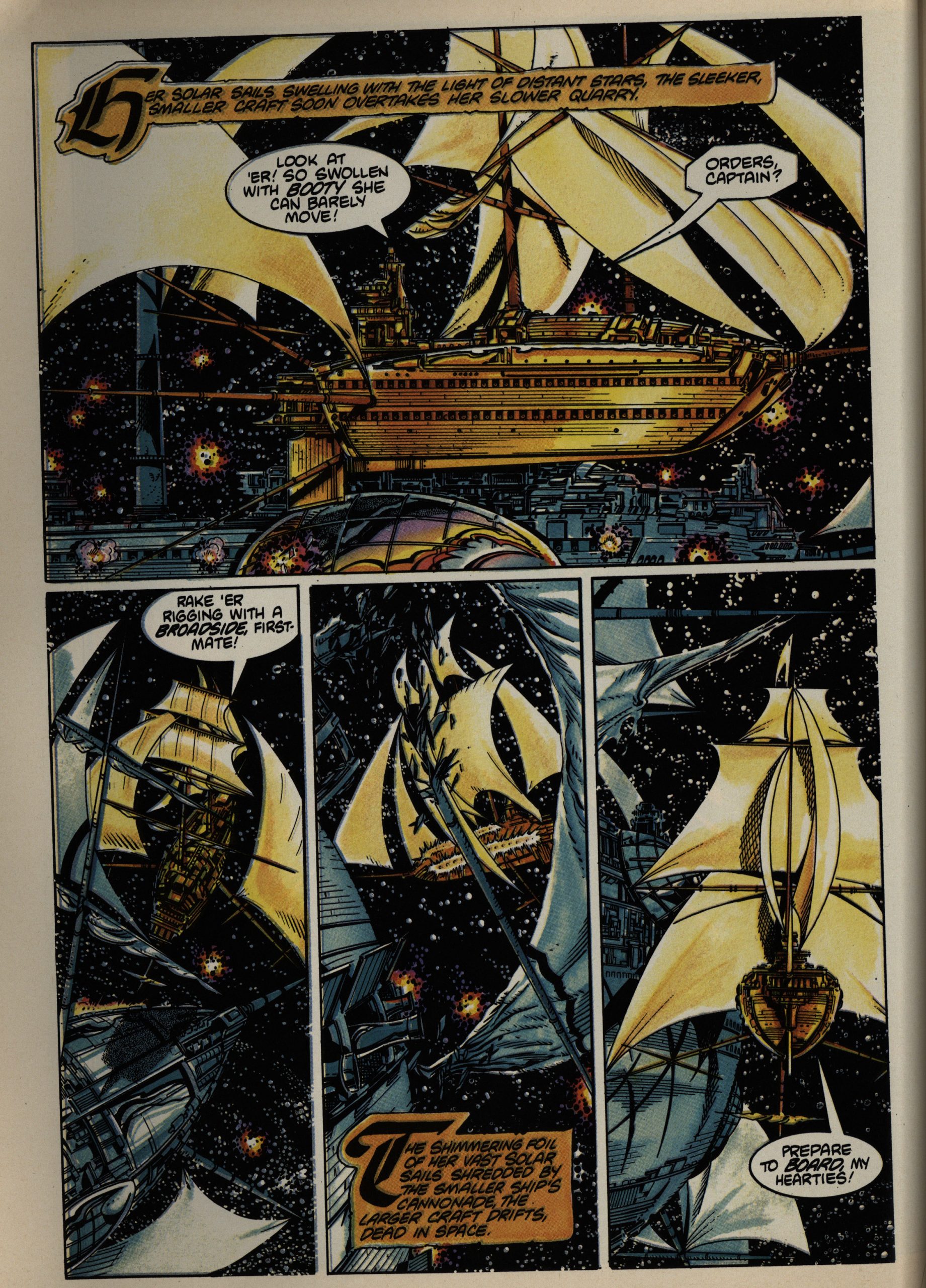 And sail ships. In space. Because that makes sense.

Those are “solar sails”? And every planet in this universe is so close together that it apparently takes about an hour to take off from a planet and go to the next and then set down (on water). So, OK, this isn’t sci-fi in any sense of the word, and that’s fine? But this distinct lack of world-building means that there’s not really a lot to be interested in here. Everything is nonsensical, and nothing makes sense, and that’s tedious. 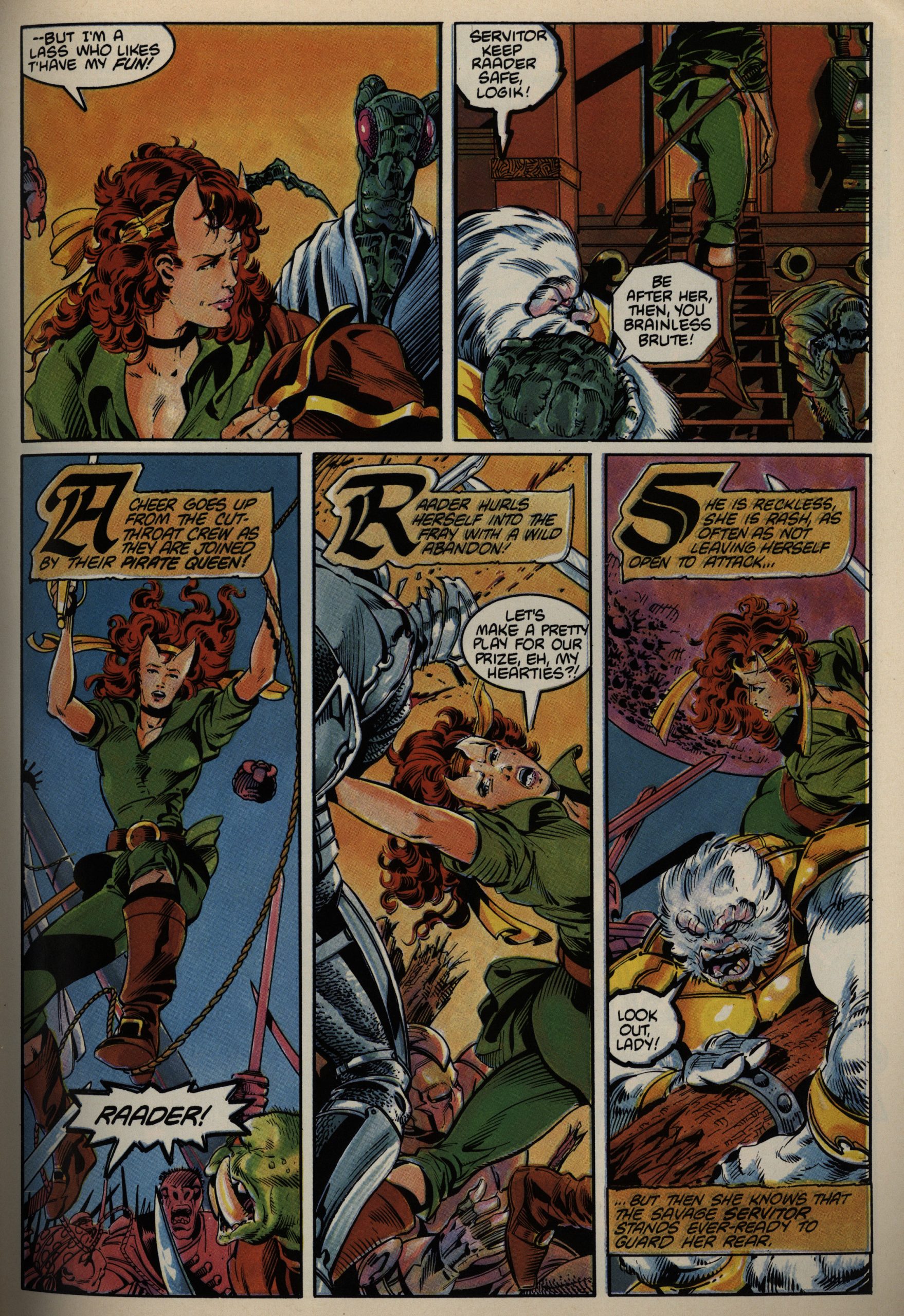 The character designs are similarly uninspired. One of the main characters has these flesh-coloured horns on her forehead, but from many angles it just looks like she’s got two huge widows’ peaks. Odd. 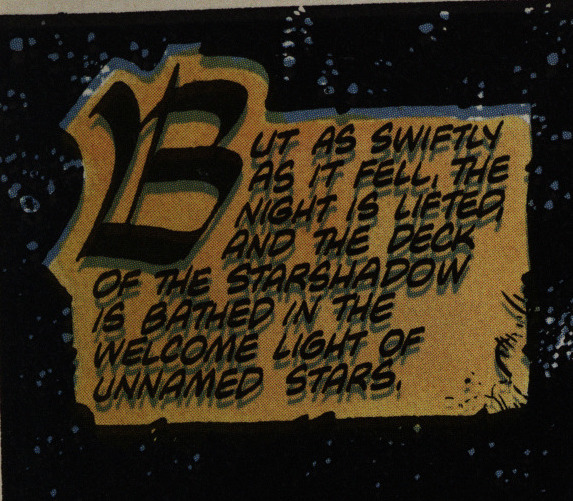 And the printing of the “graphic novel” that opens the series is pretty bad. 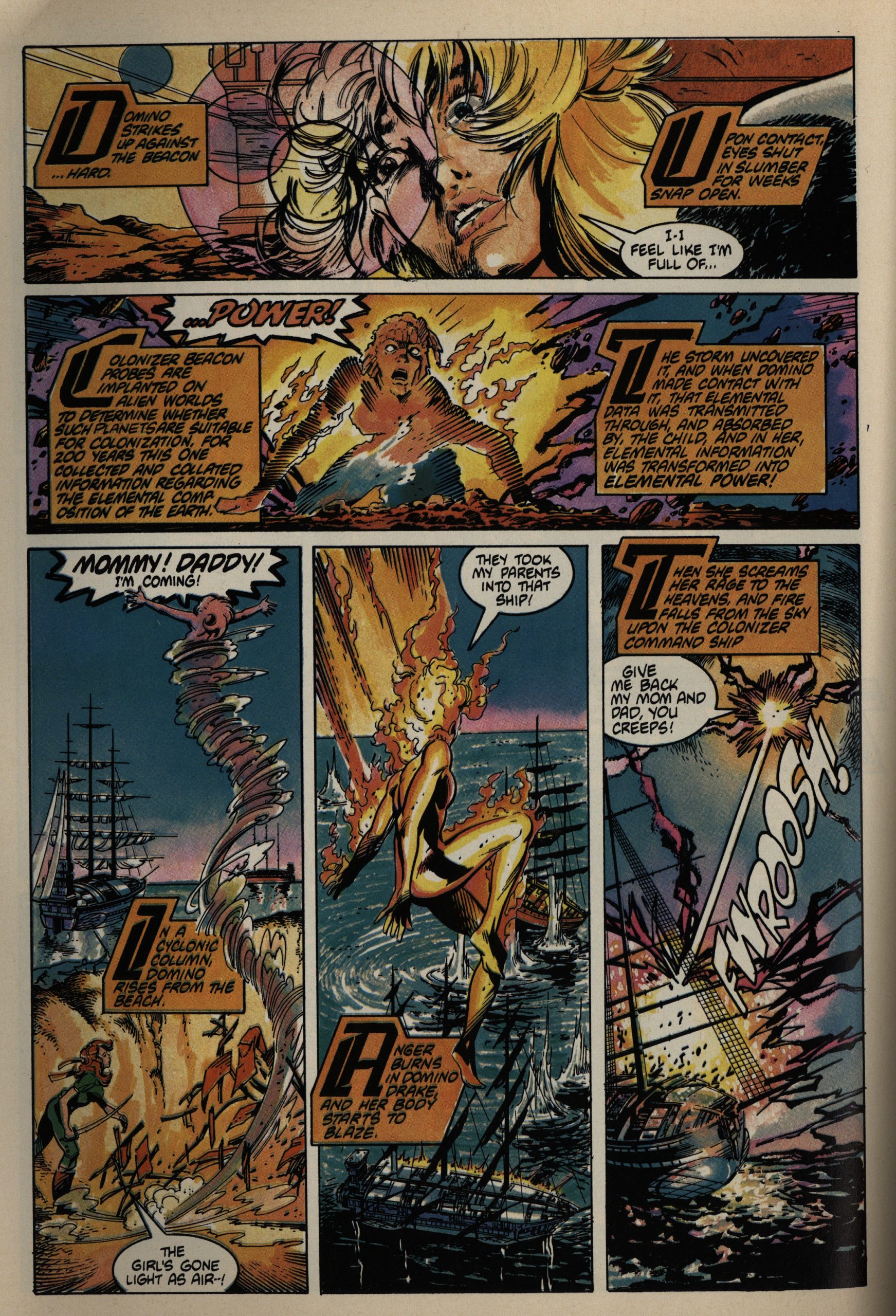 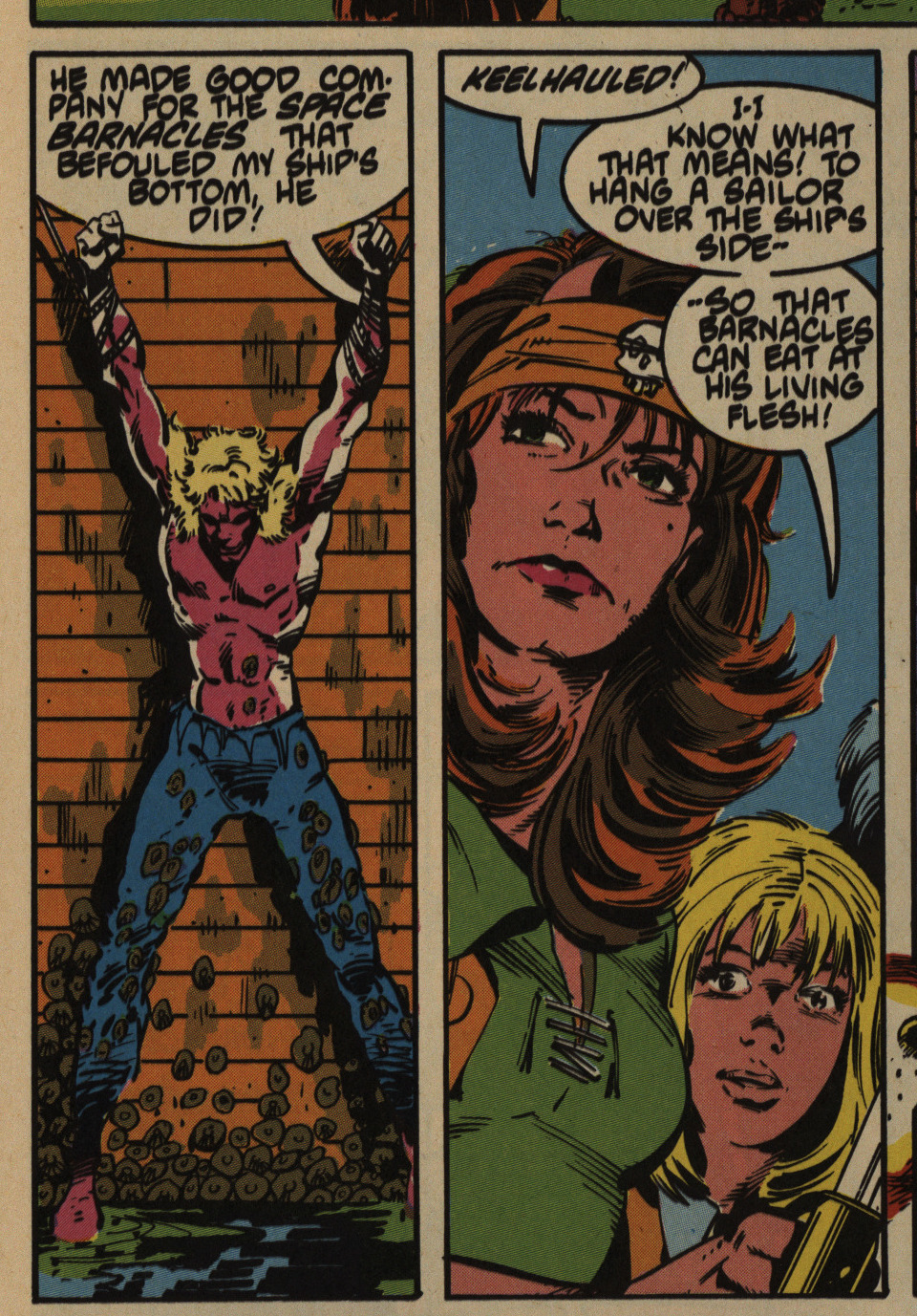 I don’t think being eaten alive by barnacles was a standard part of keelhauling? But what do I know. 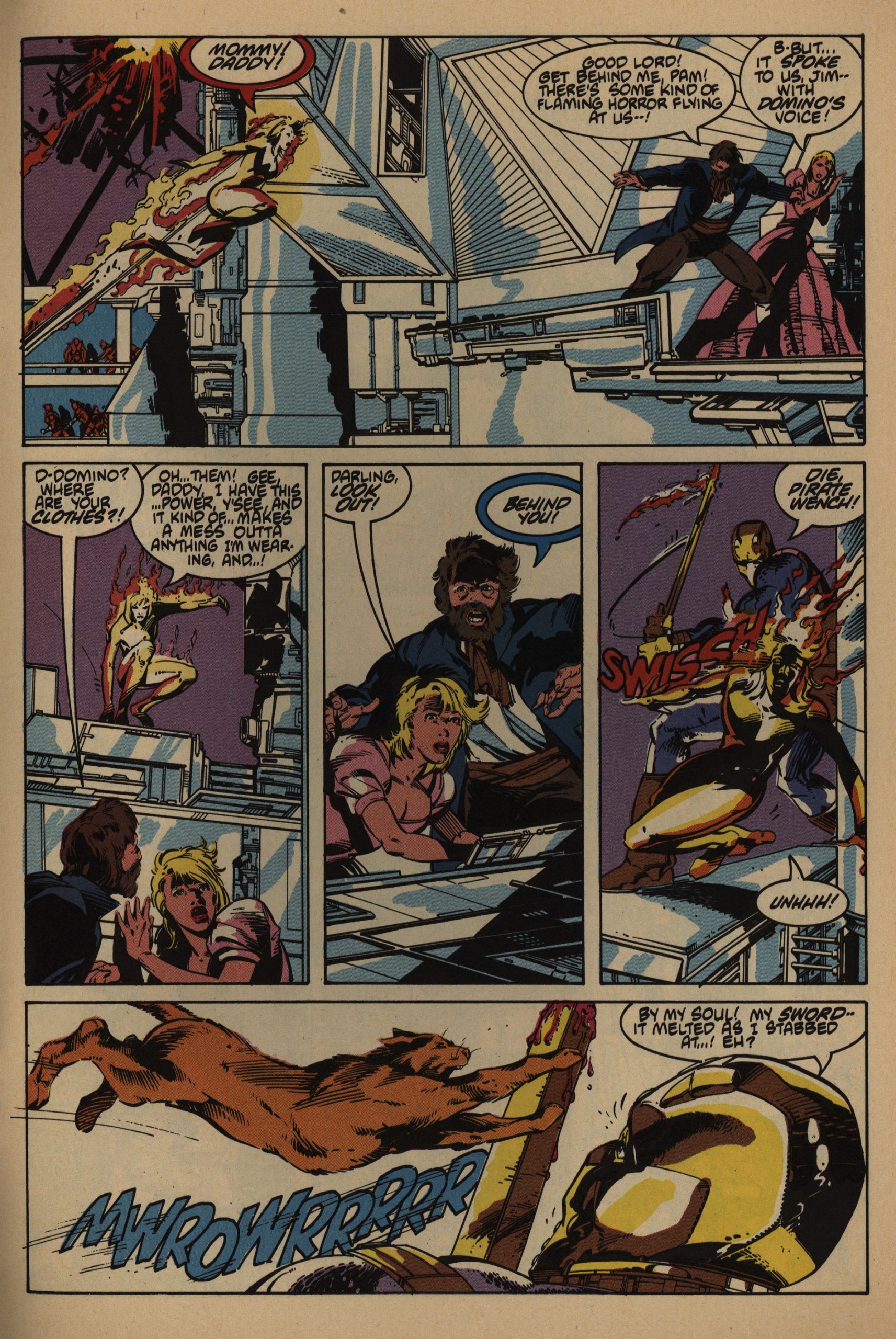 At least there’s a cat! The artwork’s not that bad, really. It’s marred by some colouring production errors, but… Did I mention that she’s thirteen? 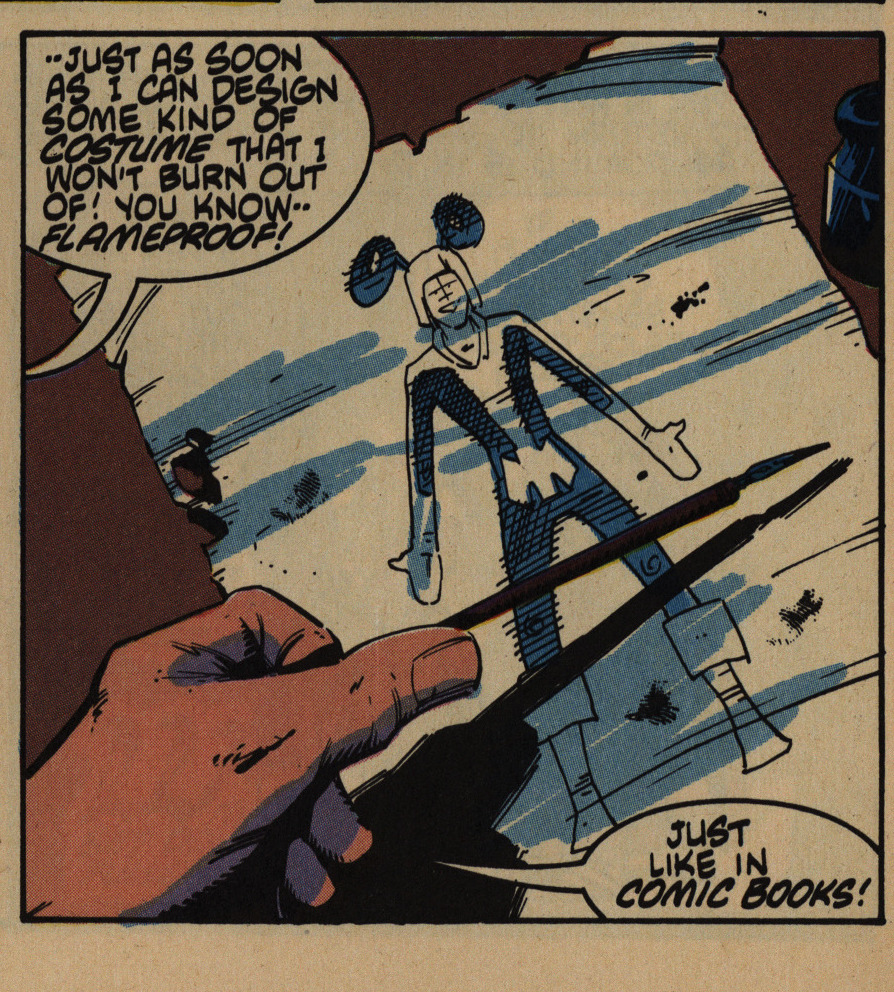 They give her a super-hero costume after a while, though. Which doesn’t burn up, because it’s made from the same fabric as the “solar sails”, which can withstand the blast from a sun. But can be torn with a cutlass. *sigh* 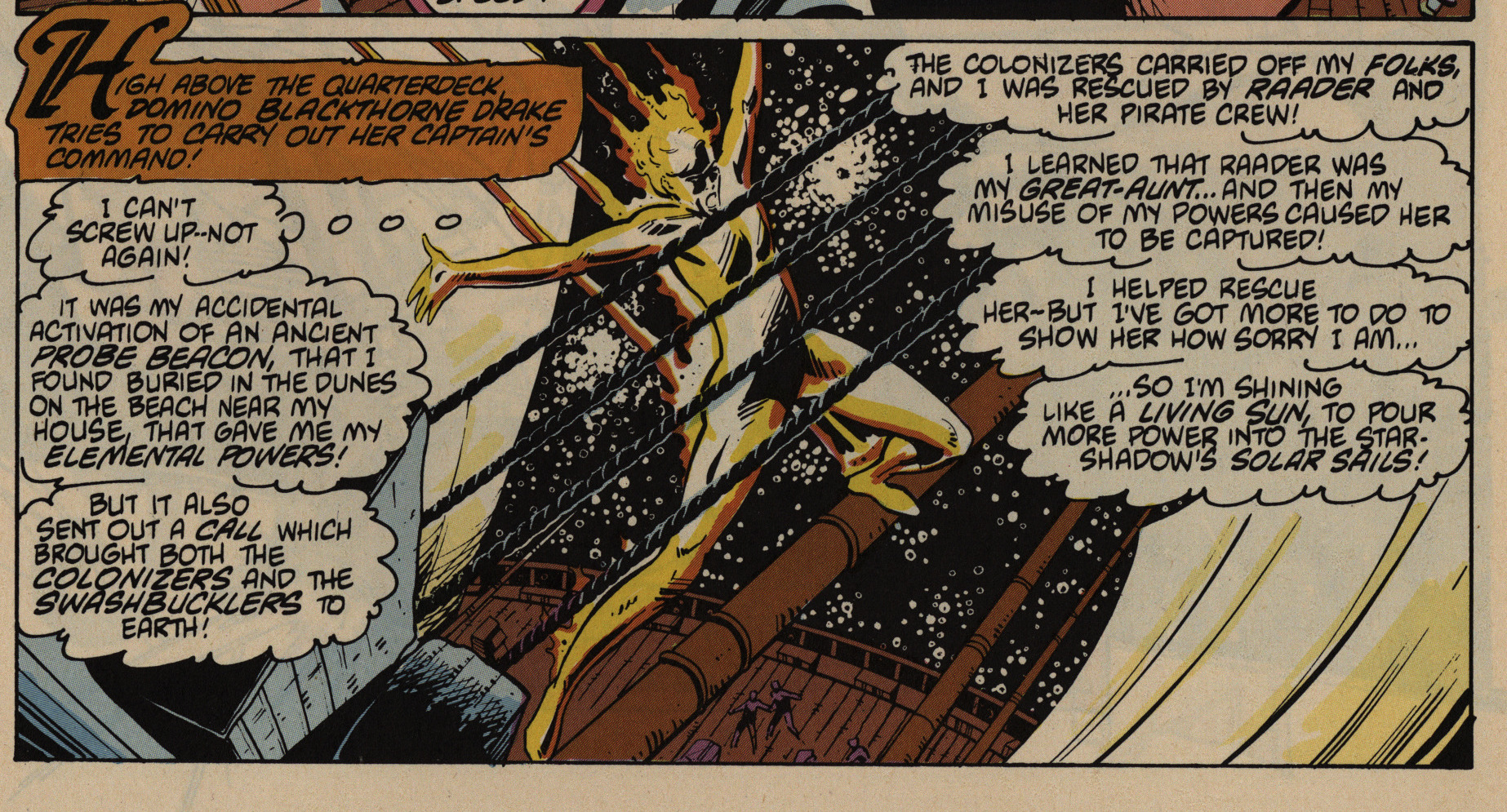 Mantlo never lets up with the recapping. Dreadstar had the same problem, so I wonder whether there was an edict from Goodwin that every issue had to keep readers updated about everything that had gone on before? 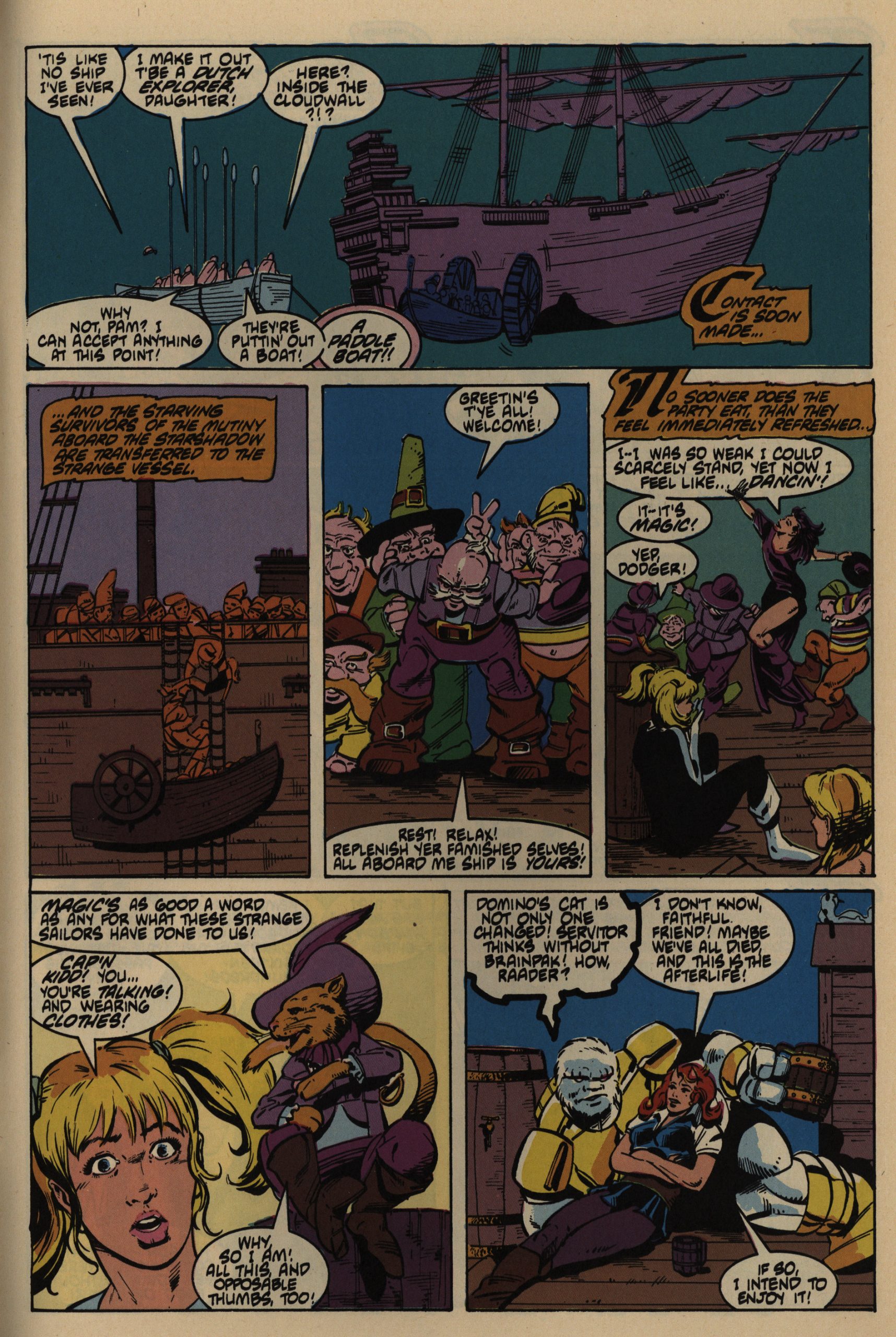 There’s not much overt humour in the first few issues (but a lot of inadvertent humour), but that changes rather abruptly. It’s never, you know, funny, but there’s an attempt at that, and things veer more off into forced whimsy with dwarfs and talking cats and stuff. In between the bloody fights with arms cut off and etc. It’s a weird mix. So of course they start thinking about making this into a Saturday morning cartoon.

As you know, Bob. 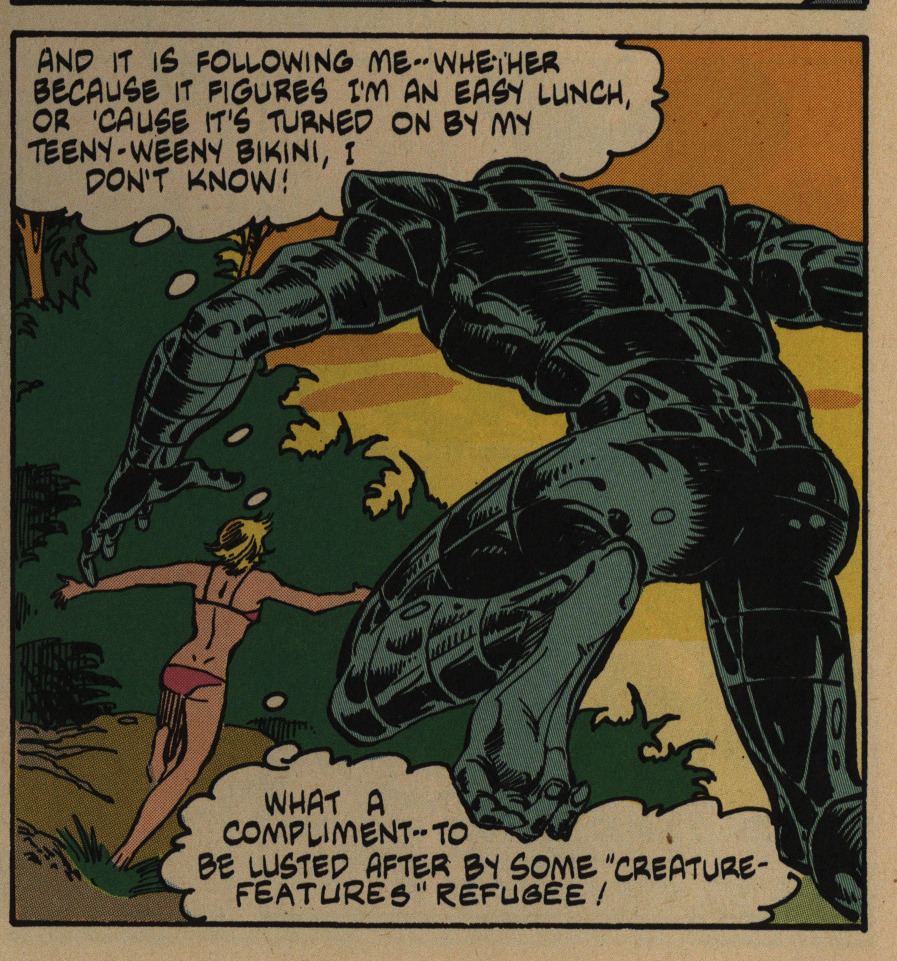 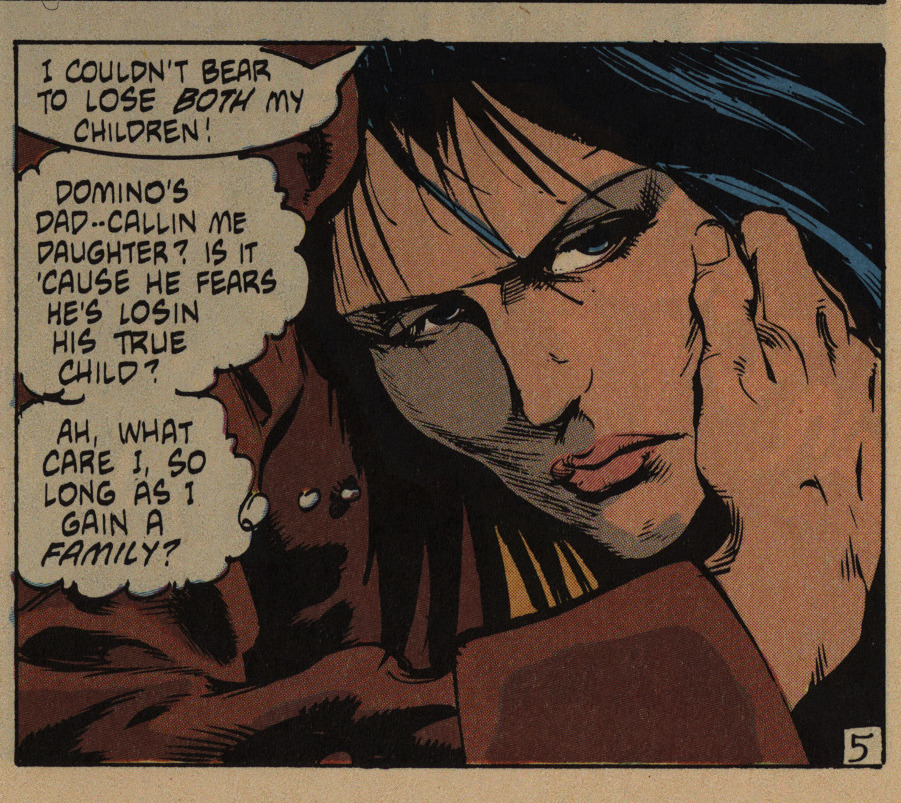 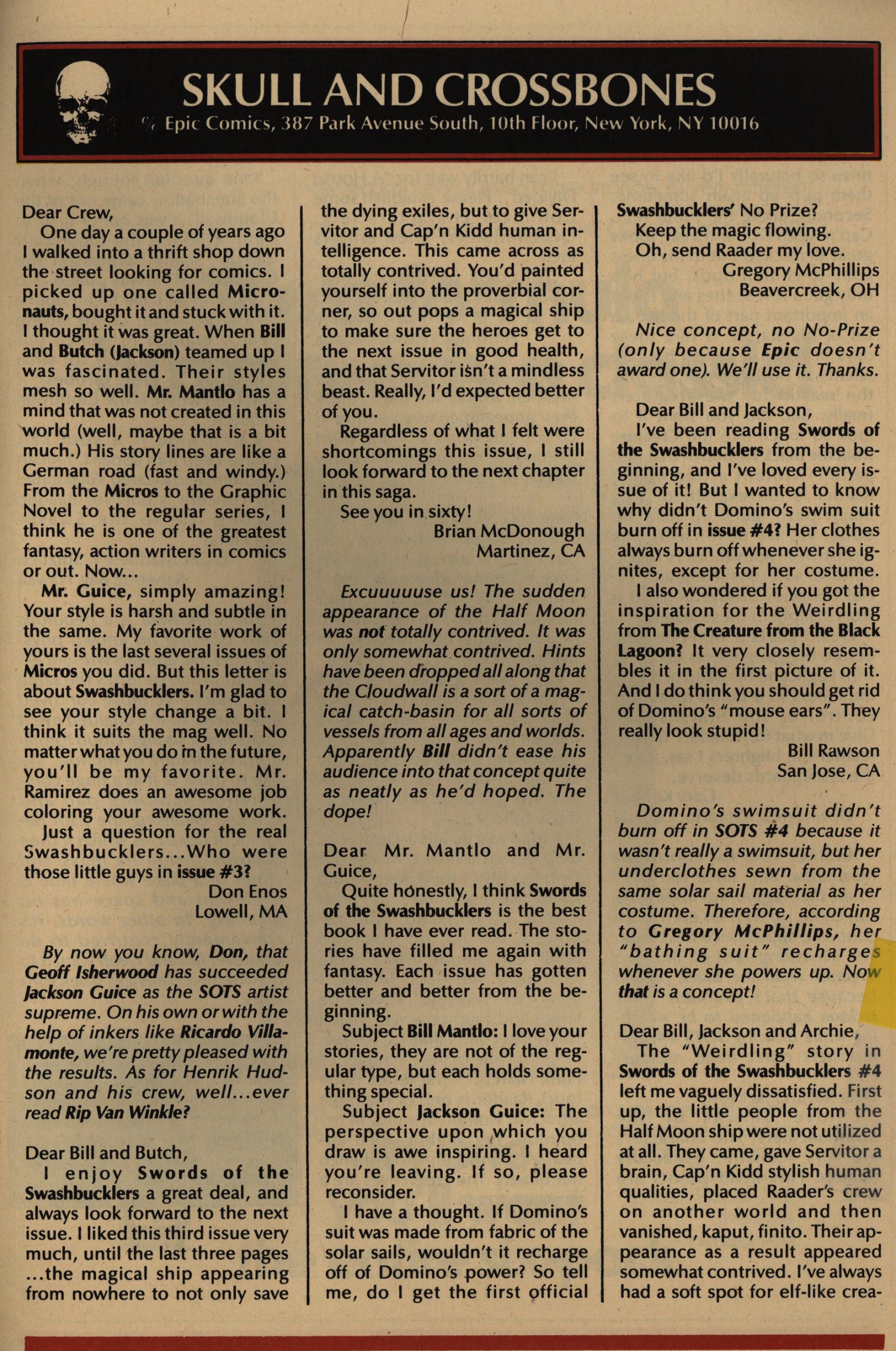 The other Epic letters columns have been full of interesting letters and criticism, but the only ones that make it to print here are the ones with praise. These are the two most critical ones of the entire series, and are about the talking cat and the magic being contrived. Colleen Doran takes over pencilling for a couple of issues, which makes everything prettier, and even more nonsensical. I mean, when you have “solar oars”, why should they be connected to the boat with a rowlock or something? Why not just wave them over the side? 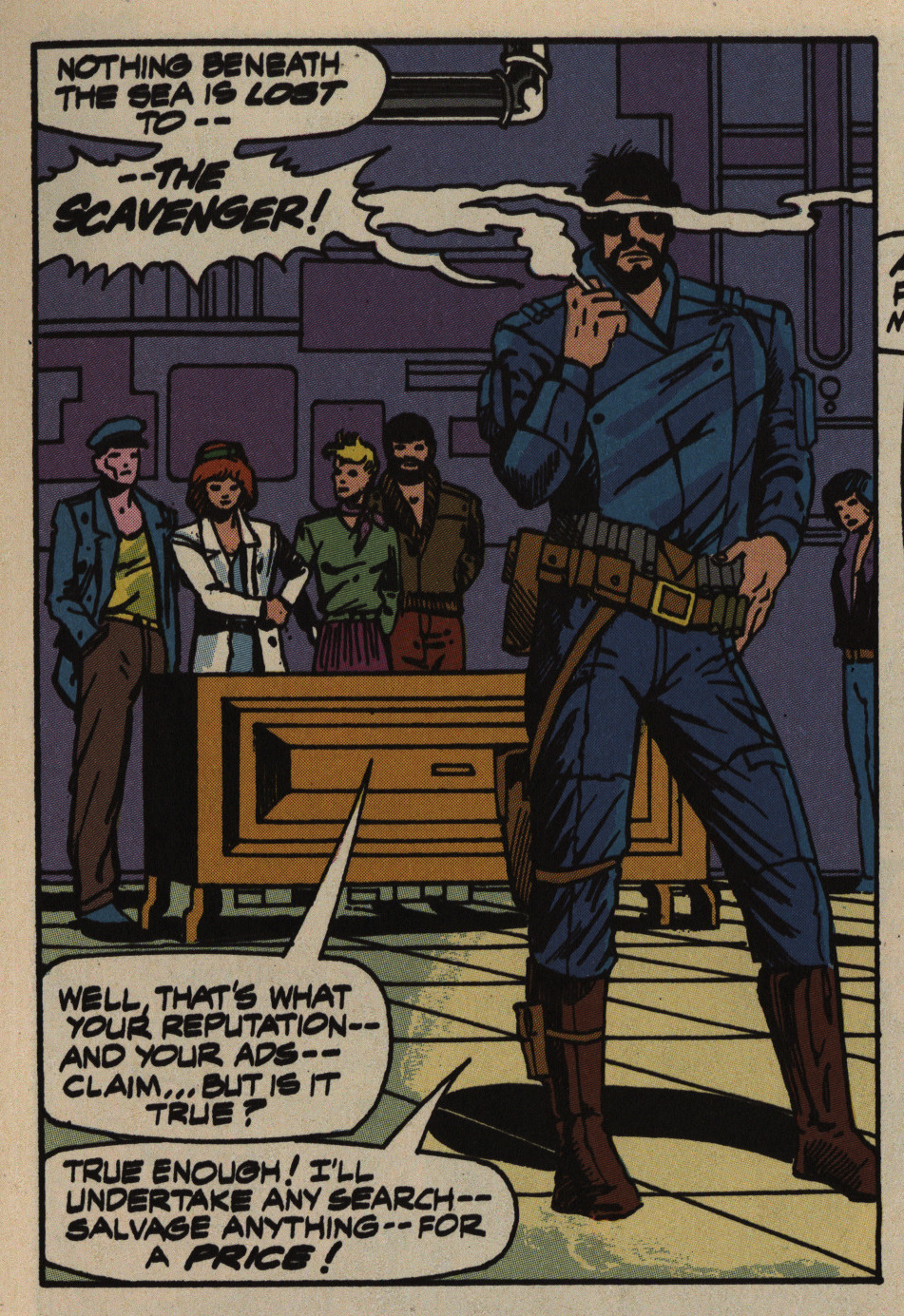 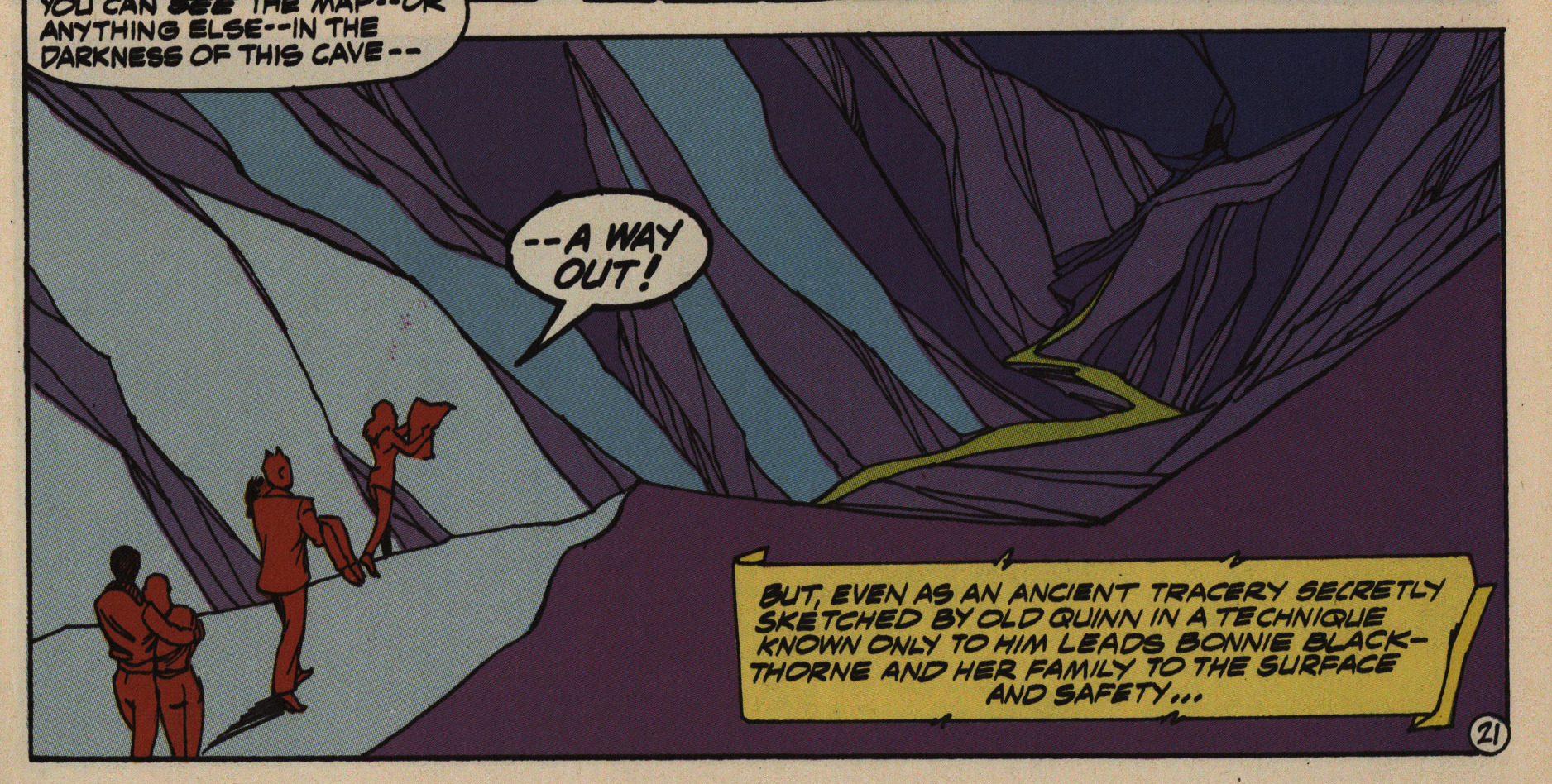 In one of the later issues, they go to The Japan Planet, which, as every other planet in the Galaxy, is a planet with one culture and seemingly has a population consisting of two villages. Geof Isherwood must have felt stronly about it, because it’s the only issue he both pencilled and inked. 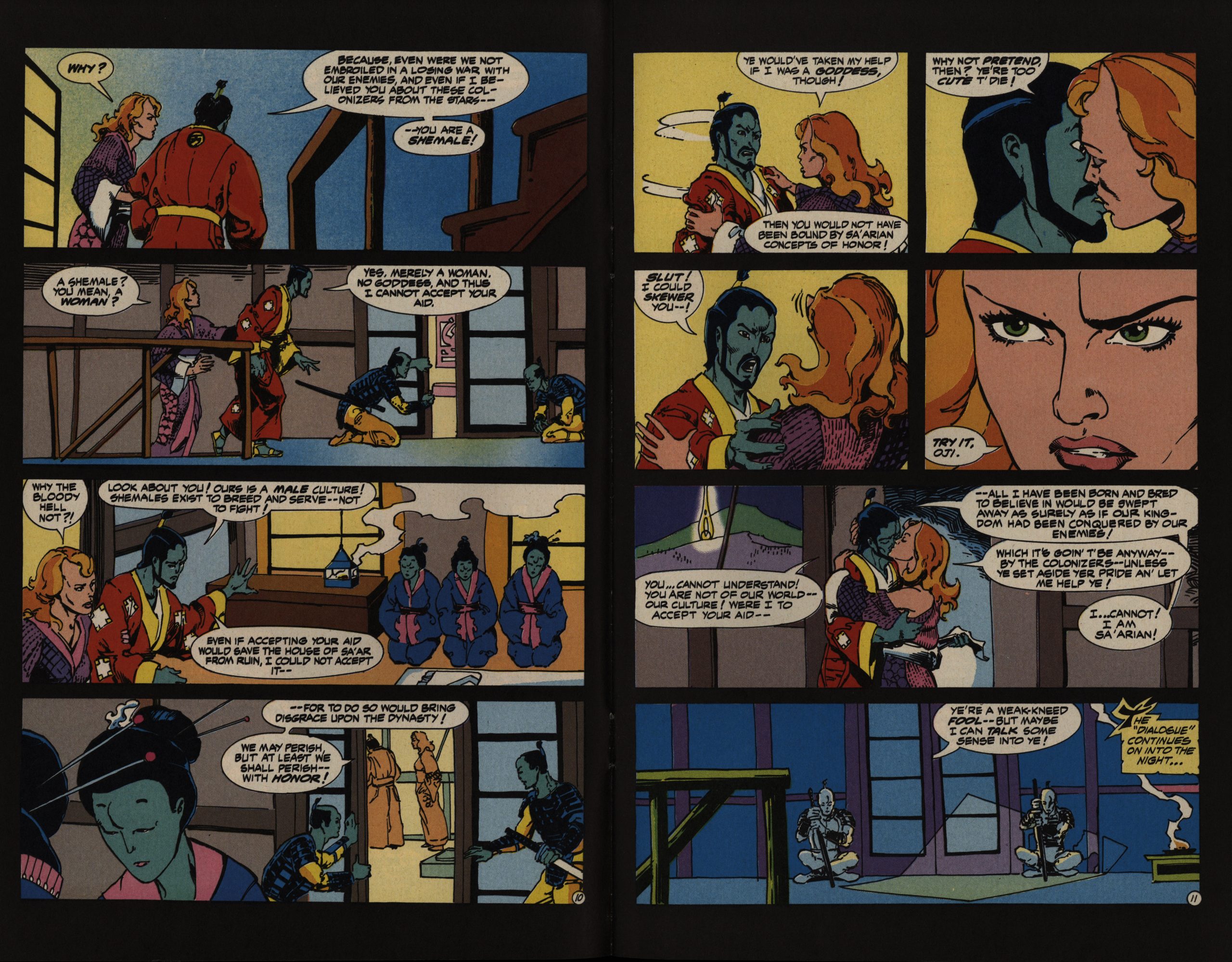 I won’t make any attempt to explain what the “plot” is about, because it’s distilled tedium, but at least Colleen Doran has fun. And we’re introduced to a lesbian character! Who’s killed immediately after the revelation. Naturally. And by golly, it is! They even killed off most of the characters! And kinda did stake a proper ending, for which I must give them some thanks, I guess.

A Kickstarter was announced in 2017 to reprint the series, and it was apparently successful? Because Dynamite did publish a collected edition.

Well, Domino and Cap’n Kidd blunder
into a pit in the sand, and what d’ye think
they find? An ancient alien machine!
(“What else could it be?” explains Mentlo
in a caption.) And, being an impetuous
youth, nothing will do Domino but that
she touch it. Needless to say, Hell’s own
repertoire of special effects breaks loose,
limning the shapely Domino in a provoca-
tive pose.
I said; this book was “graphic.” autce
gives a lot of attention throughout to the
fleshier parts of female anatomy. There is
even a painting, in the background of one
scene, of the great-great-etcetera Queen
Bonnie with nipples evident. “Pointless
adolescent titillation” is the phrase that
springs to mind, and wipe those smirks off
your faces, the Latin titillare has nothing to
do with the English teat.

Compare Mantlo’s galleons. They must
weigh hundreds of tons. There are dozens
of crewmen. They have perhaps twice as
much sail as an old-time seafaring galleon.
Yet the pirate ship can maneuver quite
neatly. He does not explain at all why
space-faring civilizations would choose
such a physically awkward means of prcv
pulsion for commerce. Not only are these
implausible vessels effective in normal
space. and hyperspace, they Can. actually
enter a planet’s atmosphere, fall through it,
and land in whatever ocean is handy;
where the solar sails, still intact, apparently
catch real wind. (Mantlo seems dimly to
perceive that atmospheric friction might be
a problem, so in one panel a man-sized
praying mantis-by the way, ever hear of
the square-cube “friction of re-
entry has set fires along the hull!” butthe
captain, used to this sort of thing, replies,
“all fires cool on spashdown!”) And how
do the ships lift off from a planet’s surface?
By using their sails, and pulling straight up
out of the ocean and into space, solely by
the force of the solar wind.
What we get in Swashbucklers -is a Sort Of
third derivative of a sound idea, with all
the inconveniences smoothed out. (If you
think that even a comic-book writer ought
to be ashamed of “smoothing out” a 1964
Boys’ Life story, I will not argue with you.)

The list of idiocies could be extended in-
definitely. There are so many that it comes
to seem like nit-picking. Let us forget that a
culture advanced enough to build such
craft, and “atmosphere initiators,” and the
devices implied by
blood running on the decks and people
standing upright on those decks, yes, let us
forget that these people would not logically
use swords and hemp rope. Let us forget
that they all speak in a mock-real literary
lingo that includes such timeworn and
unreal phrases as ‘ ‘me buckos” and
“mayhaps” and even, I swear, “shiver me
timbers.” Let us deep-six all such reserva-
tions and simply lie back and revel in that
“sense Of wonder” Mantlo and Guice
would invoke. And, if we are lucky, they
will so abuse and belabor and deaden our
imaginations that- trivial doubts like this
will never arise again.

Swashbucklers is a botch on the level of
setting, on thg level of dramatic viability,
and even (as the caption quoted shows) on
the level of simple grammar. I go on at this
length because carelessness such as
Mantlo’s is common in comics.

It’s like we read the same comic or something.

A letter writer disagrees with him in The Comics Journal #104, page 26

The main problem with Scholz’s preview is
that he chooses to approach Swashbucklers as
if the work was written as a scientific treatise.
To begin with, Swashbucklers is purely fantasy.
As any reader can easily point out, the pur-
pose and style of fantasy differs greatly from
that Of science fiction. Fantasy deals simply
with the excitement and romance of adven-
ture.