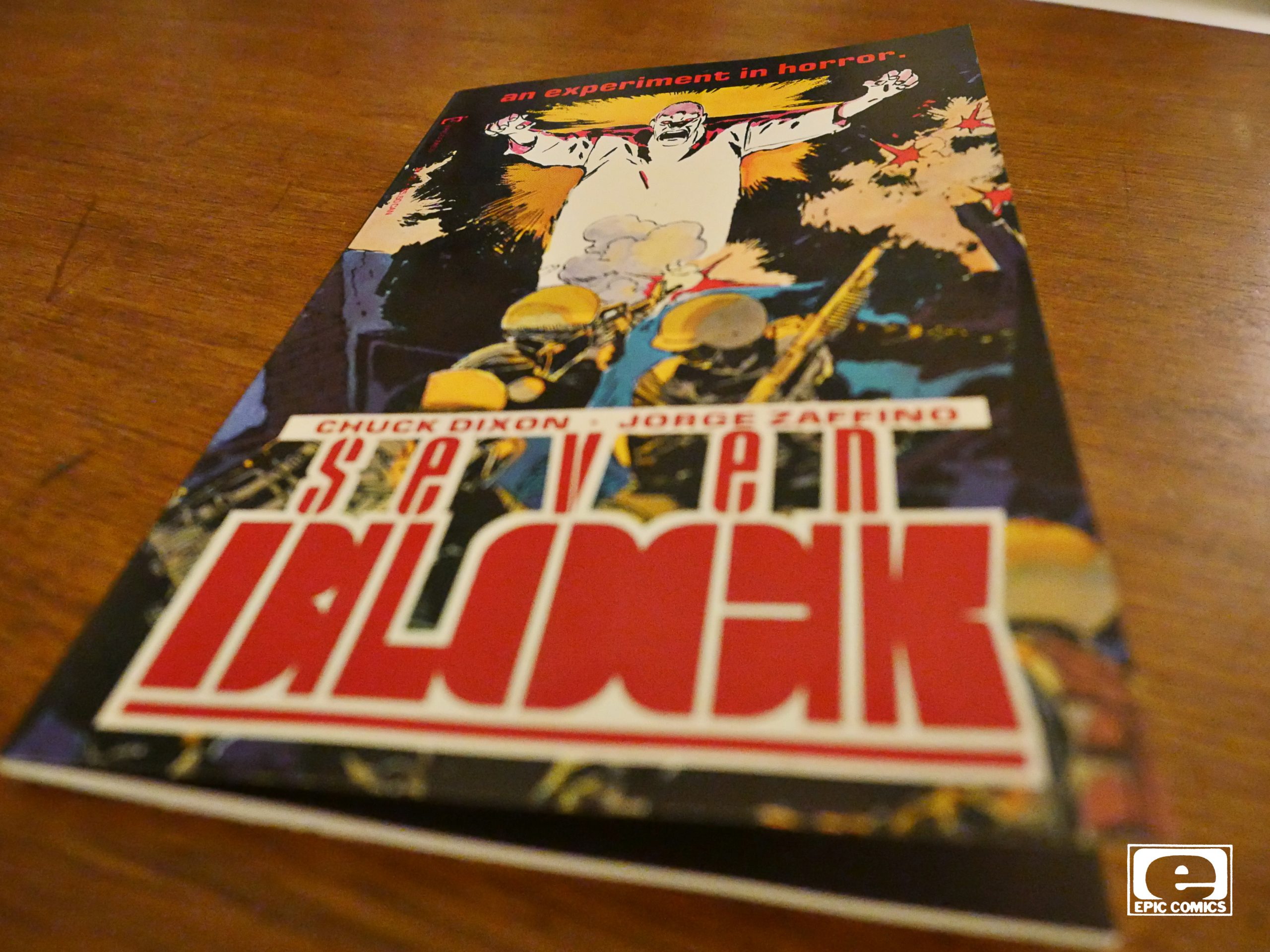 This is a slightly oddball release: It’s a 48 page one-shot published in “prestige” format (i.e., normal US comic book size, but squarebound). 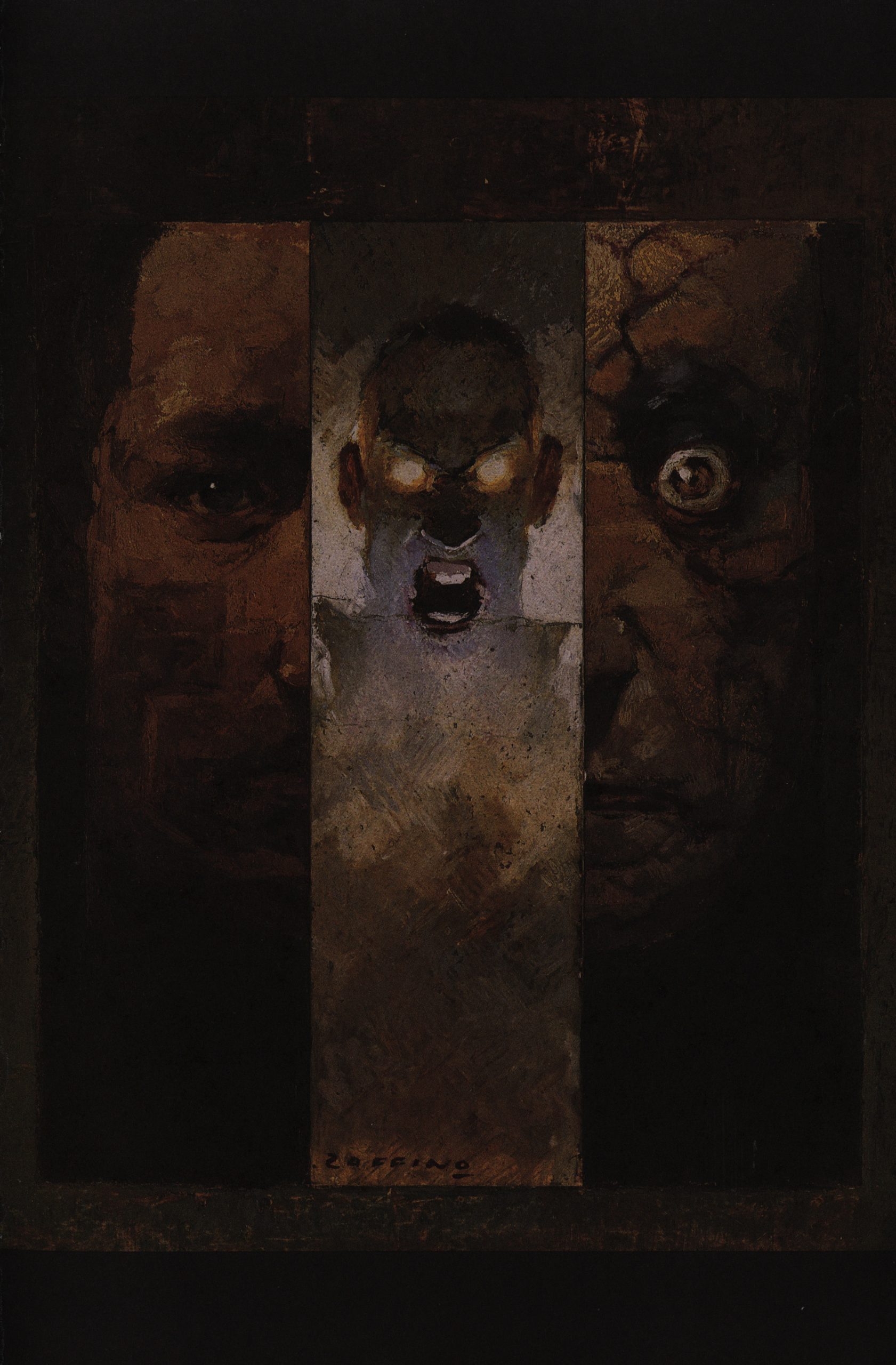 This is the only fully painted page in the book, and it’s used as the frontispiece. I wonder whether this was originally going to be the cover, but then they changed their minds and wanted something with more action? 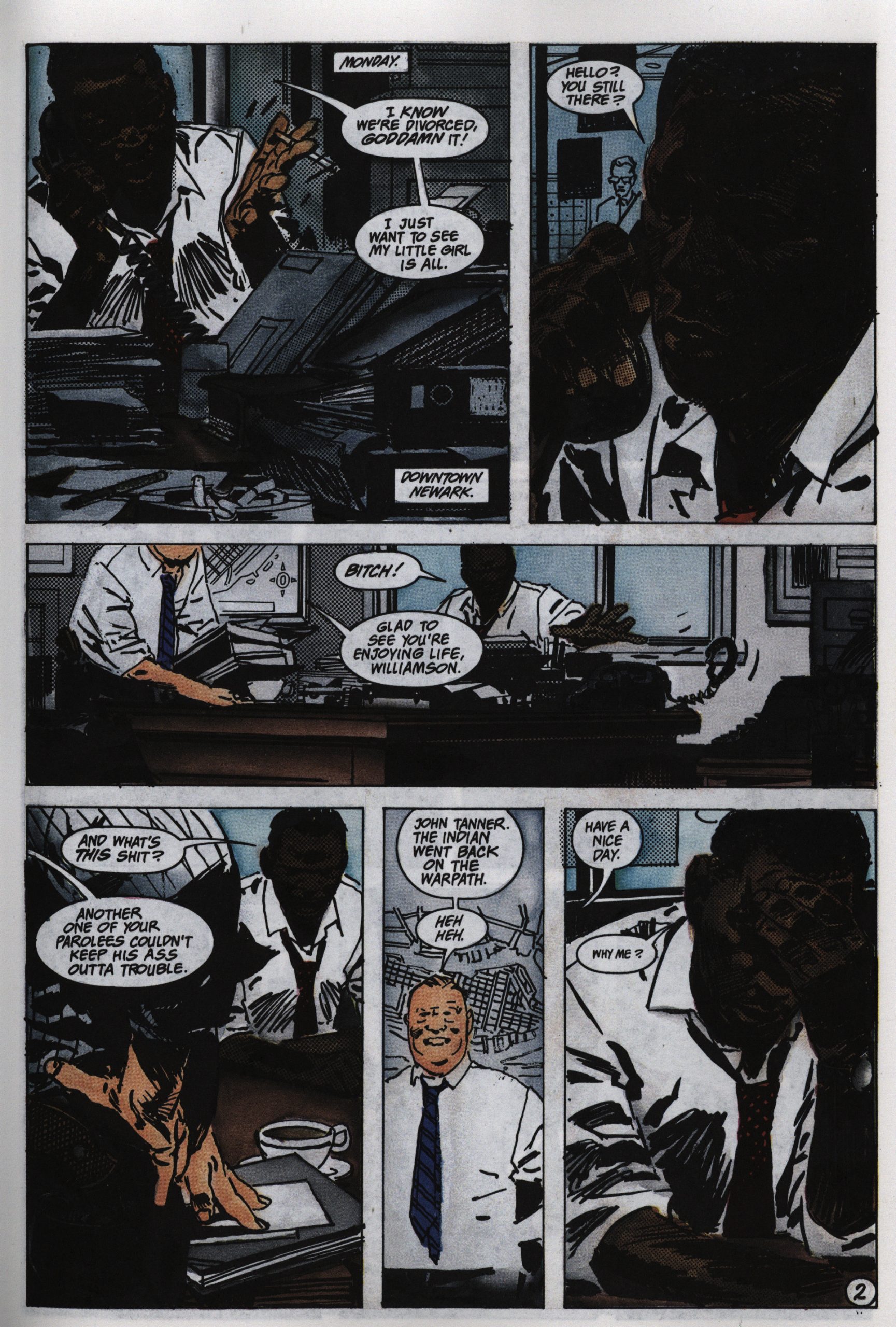 Anyway, Zaffino does the story itself in this style: Kinda roug-hewn and very dark. And he uses both crosshatching and zip-a-tone, and then the colourist goes in and puts very dark colours over his face, too, leaving us with a very dark character indeed.

But I love it: It looks so smudged and real. I mean, look at the stack of papers on that desk. Just look at it! 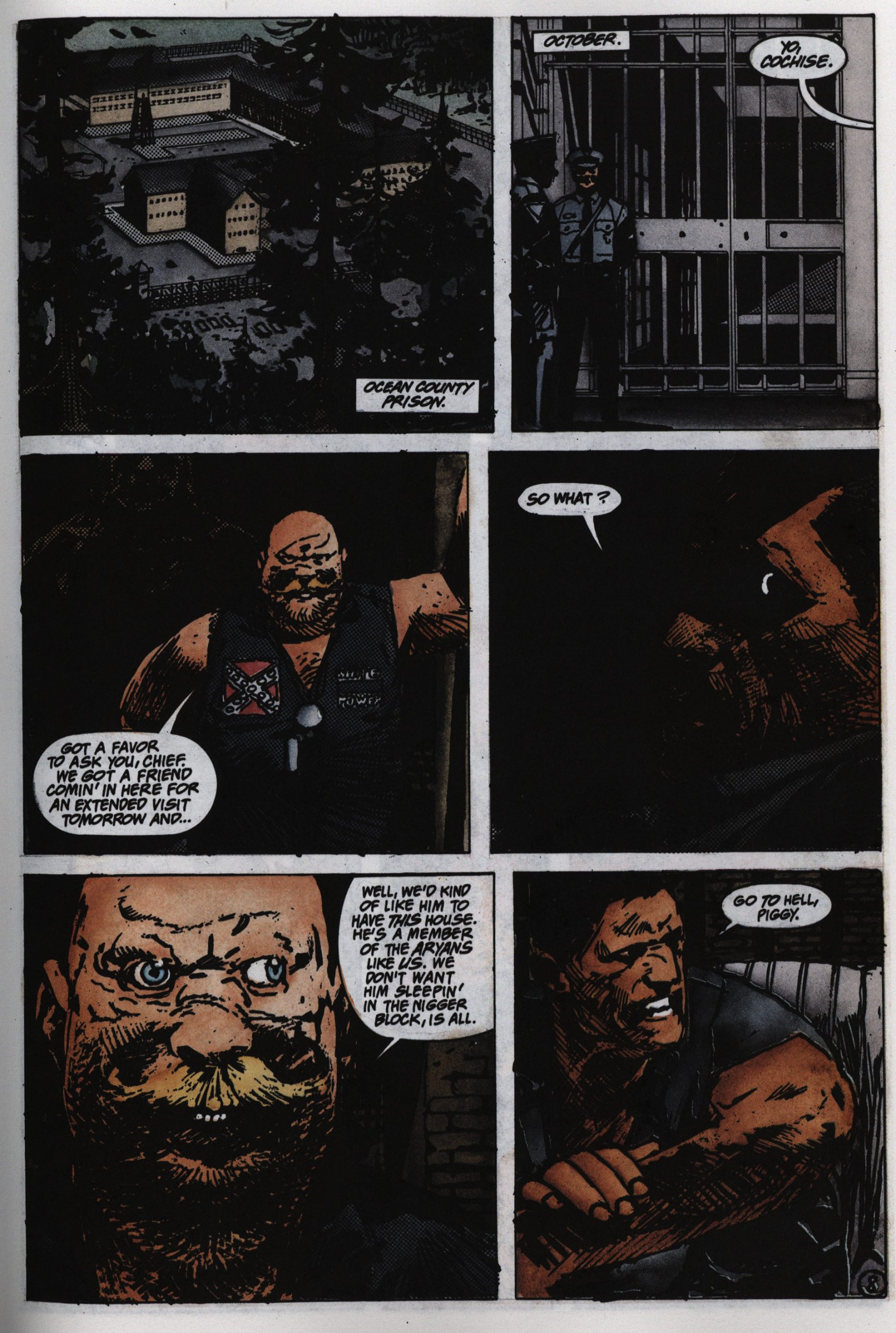 Sometimes it does veer into a kinda sloppy territory, though. Like that bottom-left face: Yes, that’s a great Nazi face, but it does look like Zaffino has drawn those lines in the size they’ve been reproduced. 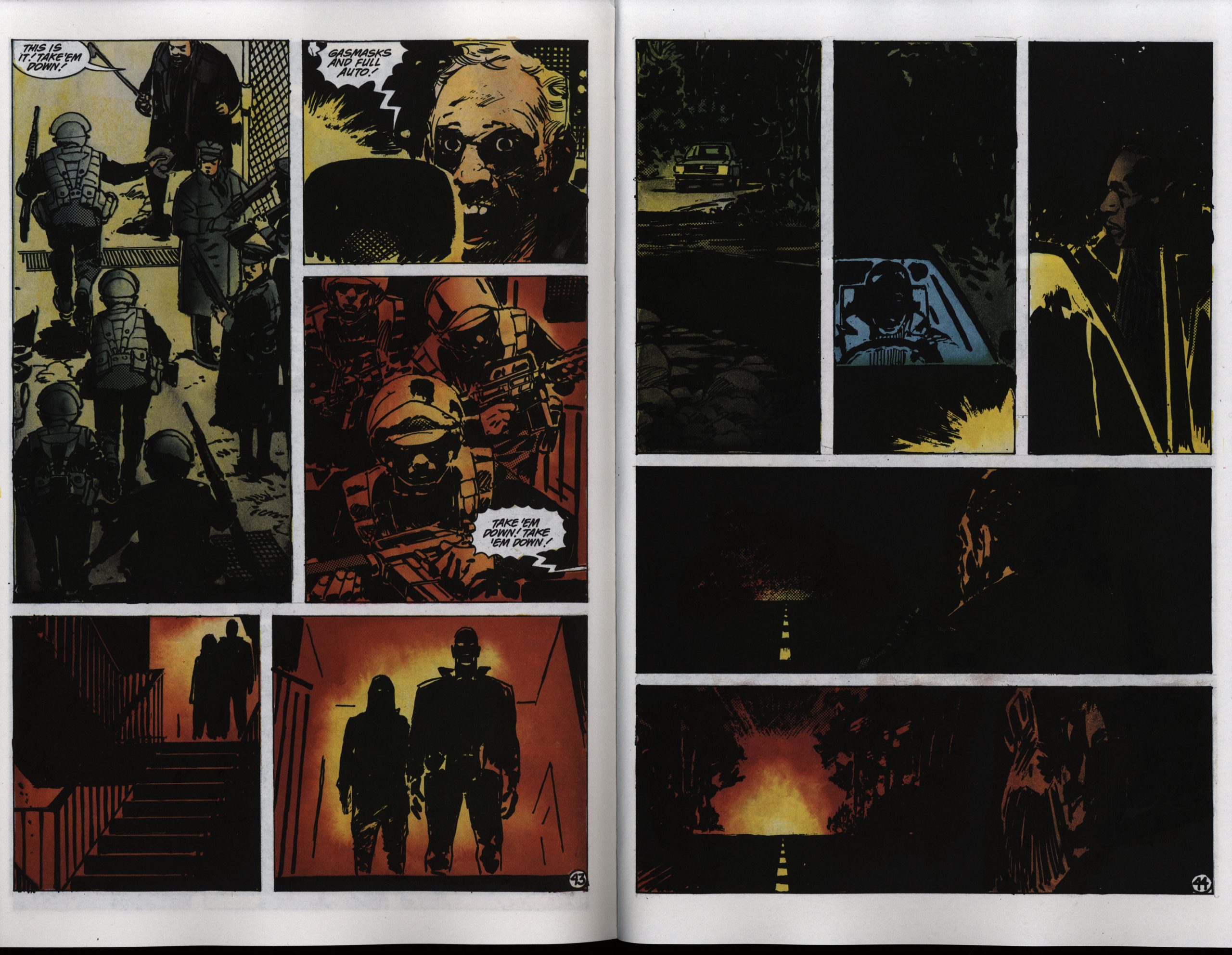 So: Looks great, and reads fine. There isn’t much story here: With most of the pages taken up with atmosphere, there isn’t even an attempt at character building (which is fine). The story is so basic, though: Evil scientists make experiments on some people. They escape. The end. In a way, it’s perfect: There doesn’t need to be more than this. It has a purity that you seldom see.

On the other hand, there’s not much there.

This book really surprised me. The
concept: prison inmates volunteer for
biological experimentation with hor-
rific results. My first reaction was that
this would be some fannish/faddish
conglomeration of Suicide Squad,
Punisher, the Vault, and Arkham
Asylum. But it’s not. This is a horse
of a different color! Whereas this
could have easily turned into yet
another tired hard-assed mutant mon-
ster super-doerstory, it turns out to
be a genuinely frightening and skill-
fully underplayed story. And, hope-
fully, it will remain just that—a
story–not an ongoing series pilot.

The art is good, as well, though not
revolutionary. It is typical Walt Si-
monson/Howard Chaykin sketchiness,
which contributes to the suggestive
rather than sharply delineated atmos-
phere I spoke of earlier. The only
failing of the art is in the coloring;
while the aim here is for darkness and
claustrophobia, there is little degree
of’ shadowing. only unmanageable
blobs and blocks of black ink.
Marvel, if this book sells a lot,
please, Oh please, do not produce a
sequel or, worse yet, make this an
ongoing series. You would destroy
everything that makes this book good.