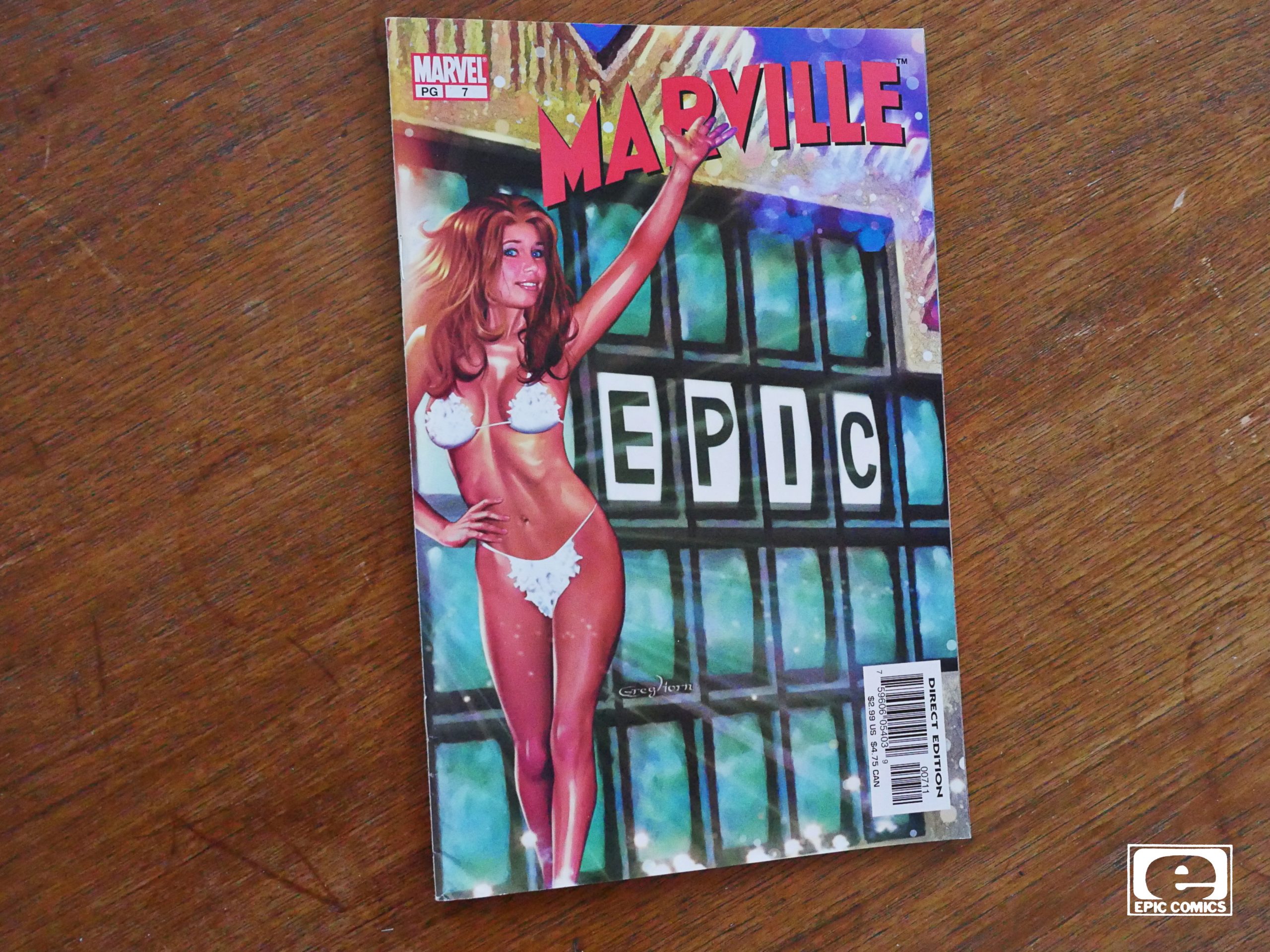 In 2003, Marvel wanted to re-launch Epic, for some reason or other: 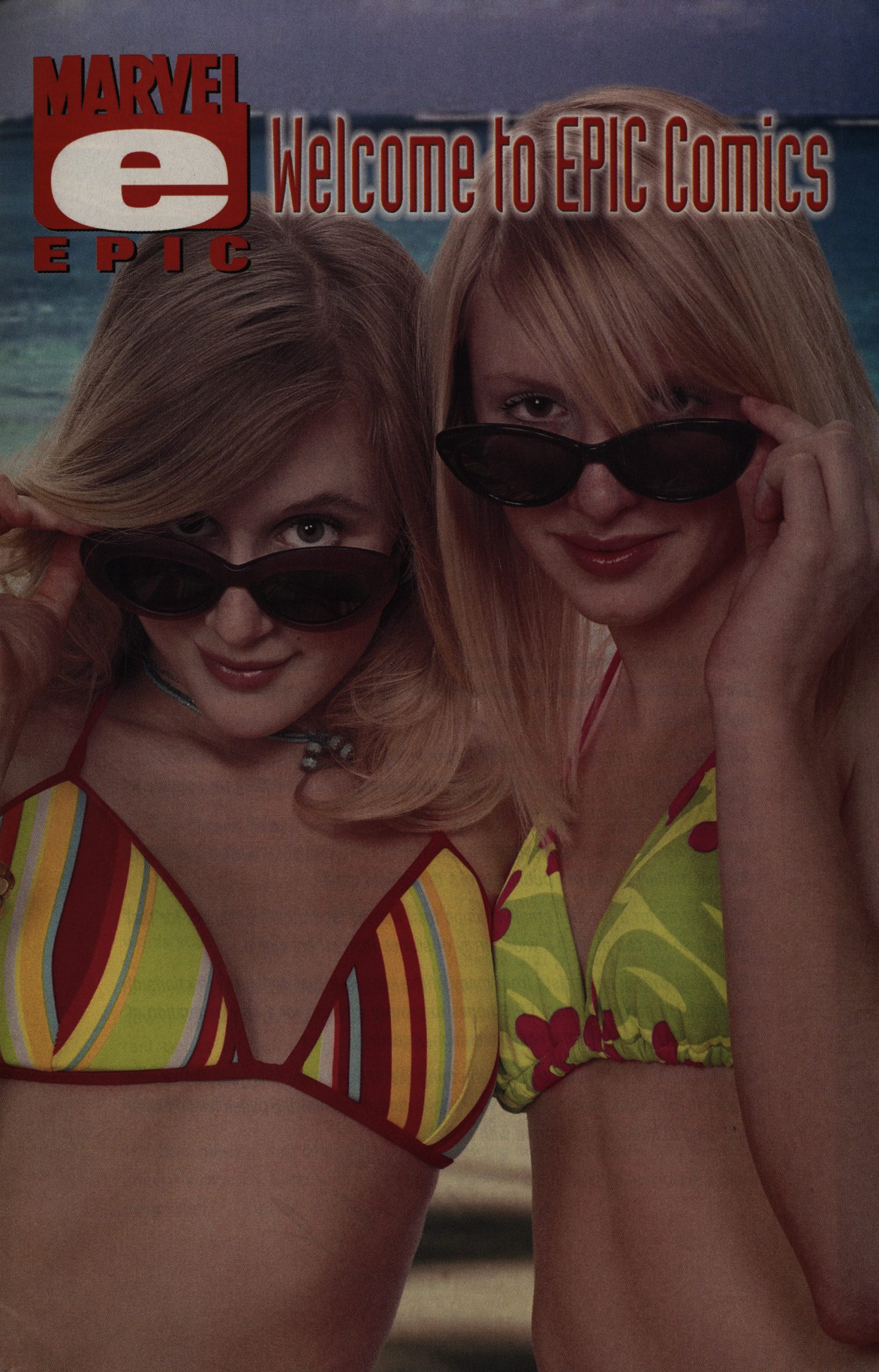 Anyway, Bill Jemas was the president of Marvel at the time, and in this issue of Marville, he explains what Epic is all about: 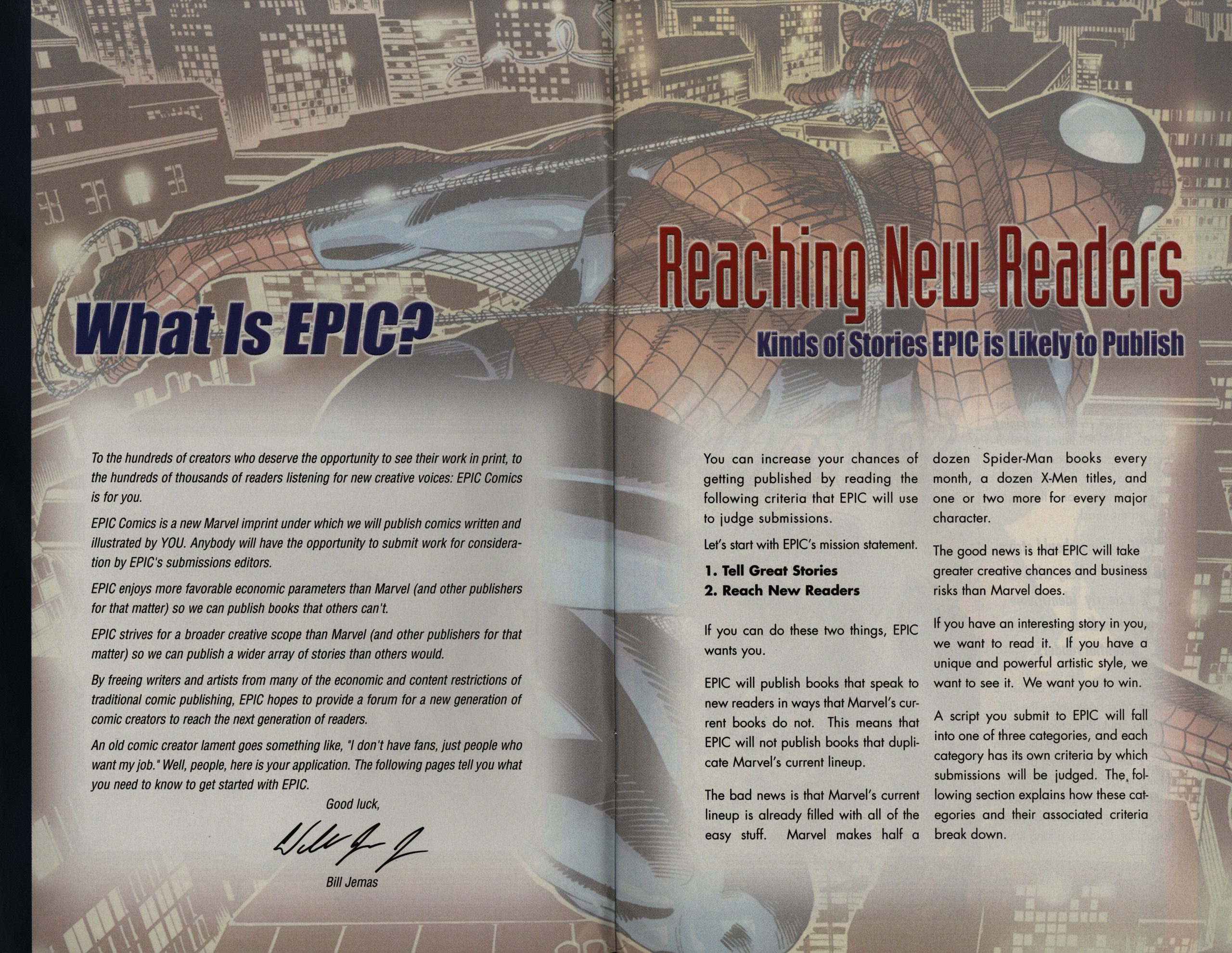 … or… does he? He doesn’t really say why Marvel is doing Epic instead of just publishing these books under the normal Marvel imprint, is he now? 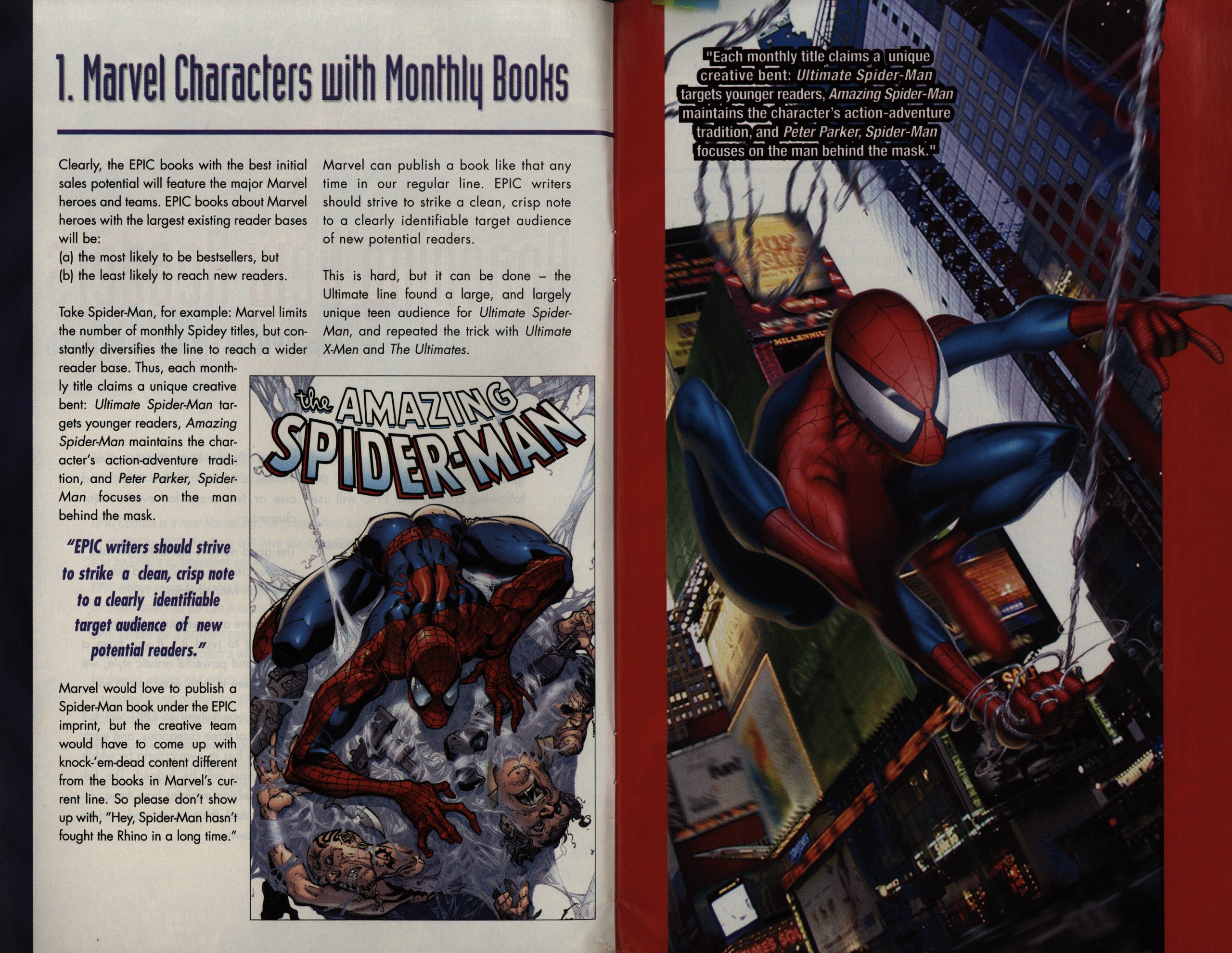 The issue is mostly about what comics Jemas likes, really. You’re allowed to submit pitches for even major characters like Spider-Man for Epic, but Jemas explains that it’s rather unlikely that they’ll be accepted. 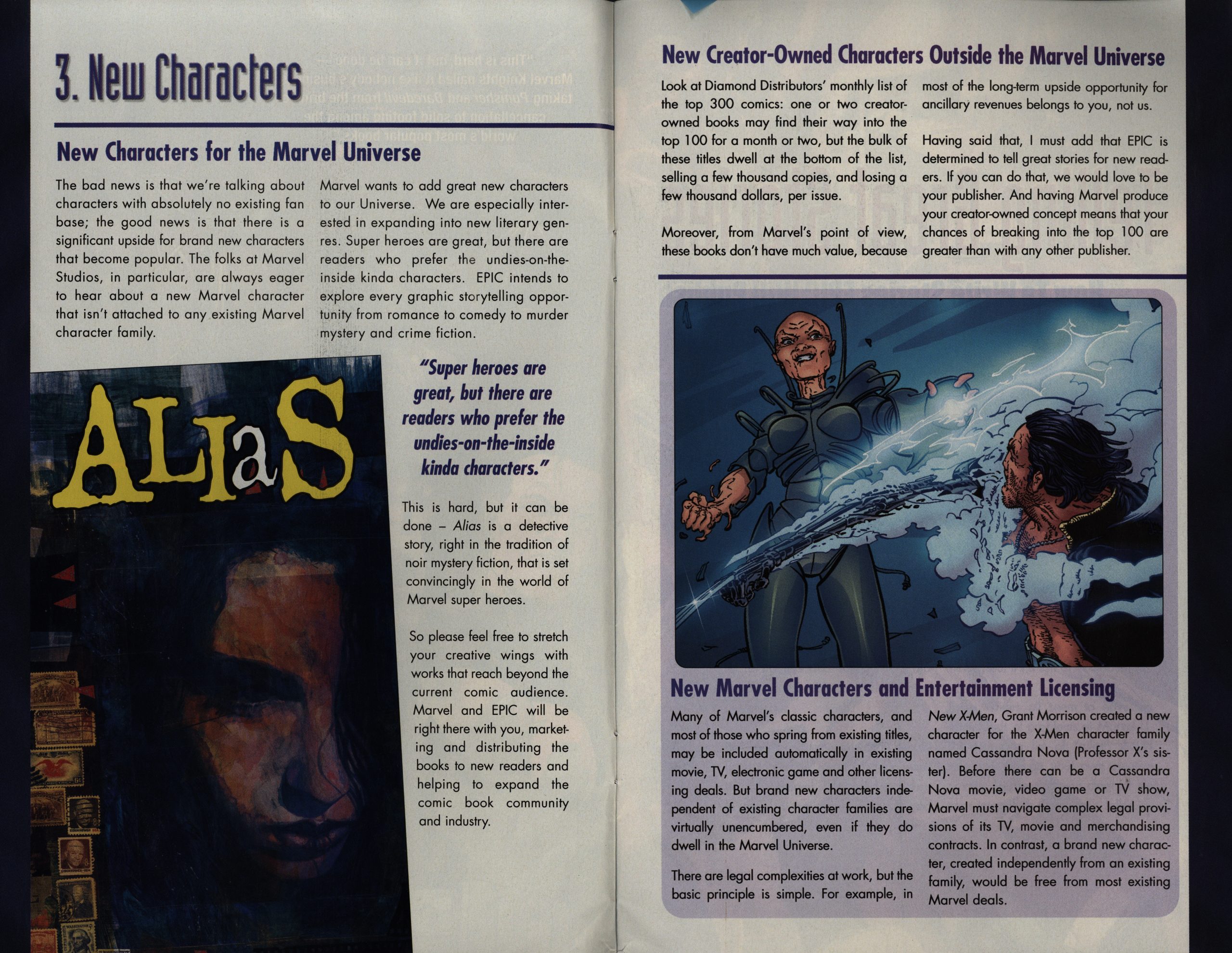 Jemas explains that licensing is complicated. 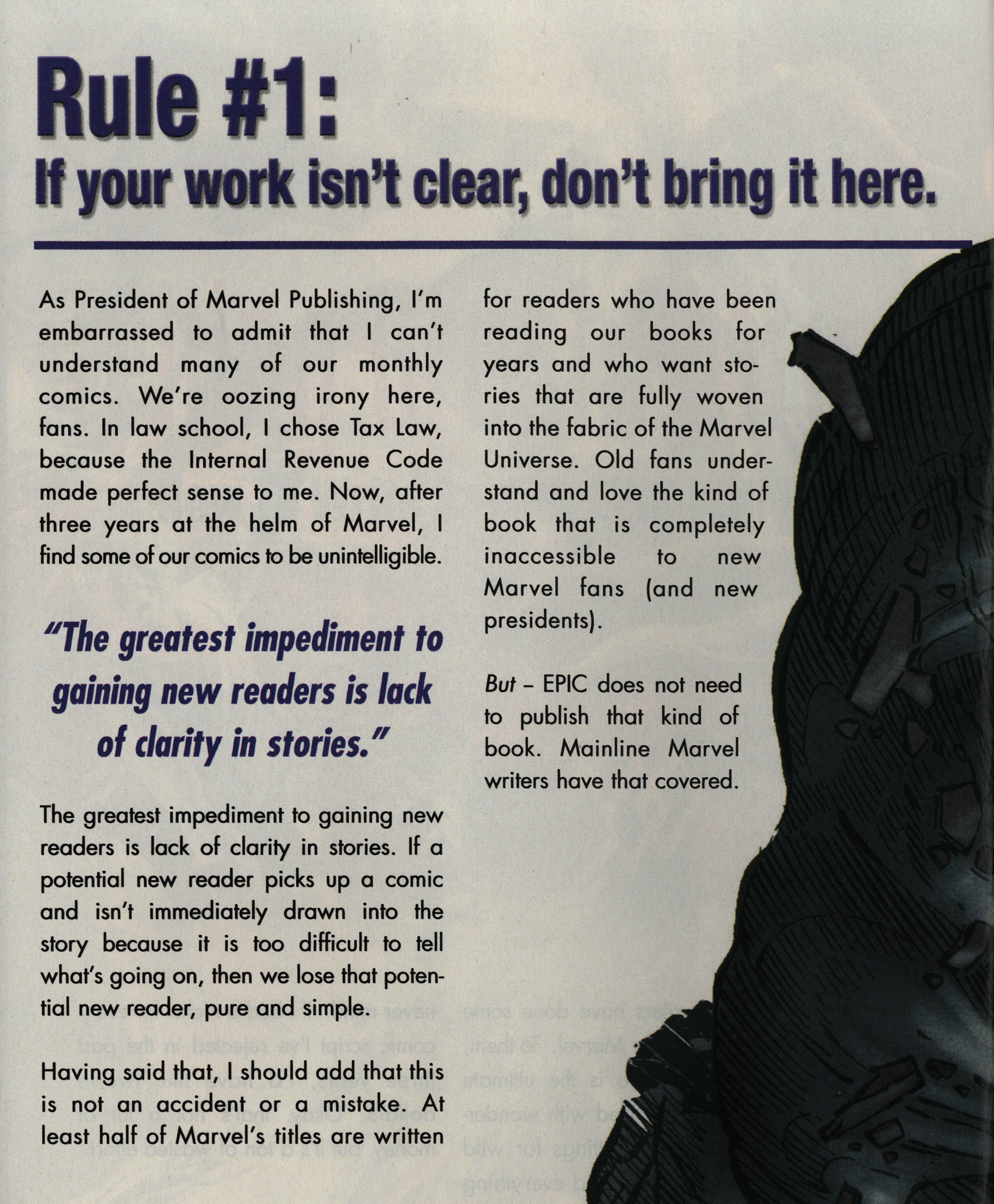 Jemas explains that he doesn’t understand the convoluted continuity of Marvel’s comics. At this point, I’m starting to wonder how firmly Jemas’ tongue is placed in his cheek. Is this really about how to pitch new Epic series, or is Jemas just poking fun at Marvel and comics in general? 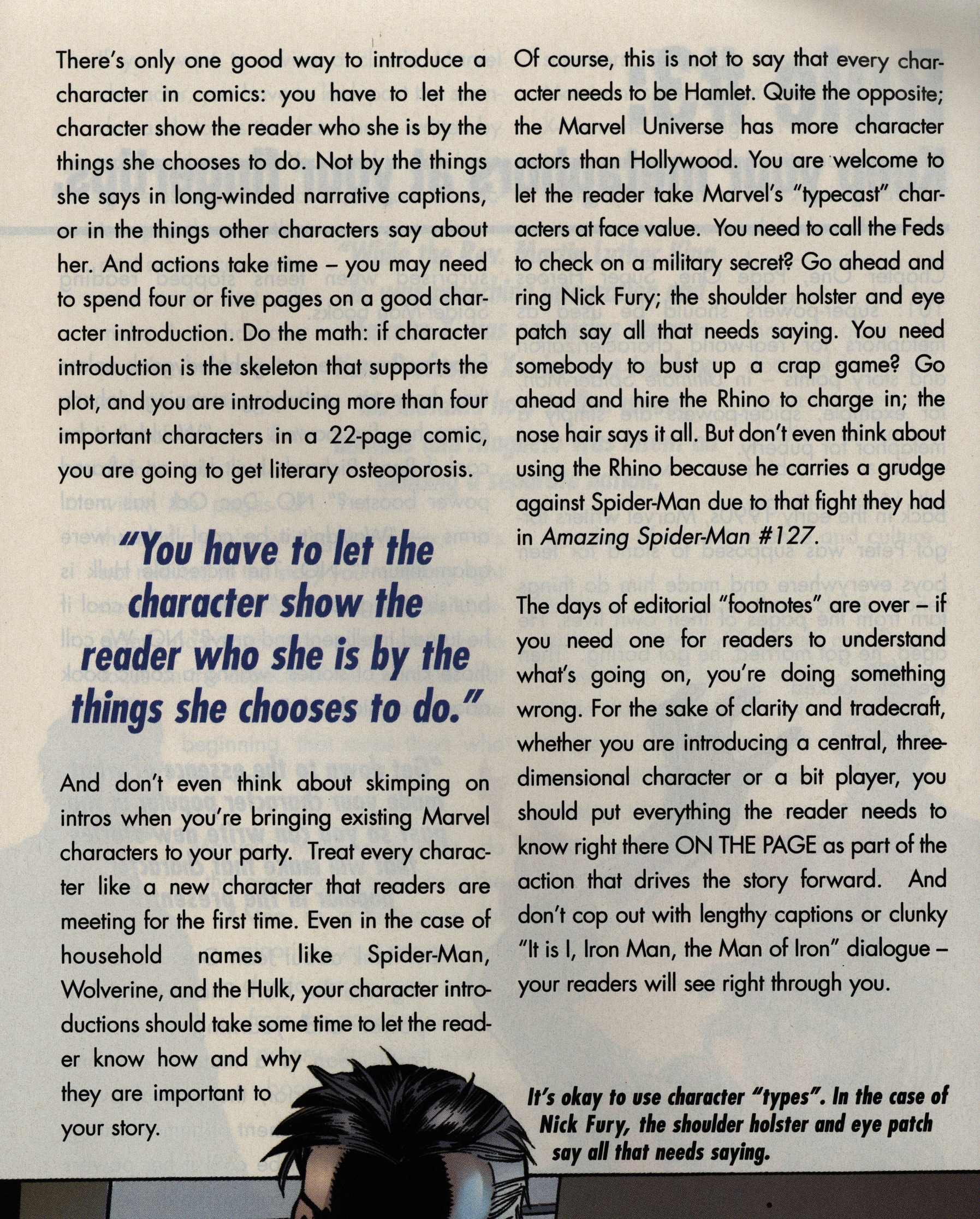 Jemas explains how to introduce new characters (and it’s not by doing an infodump, and you have to do the intro even if the characters are well-known). 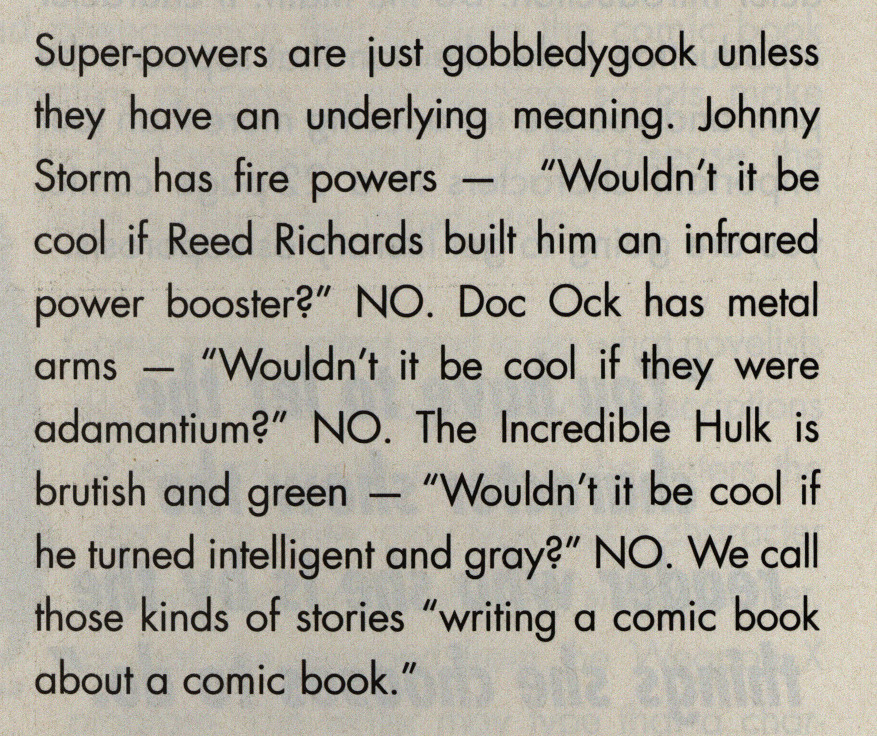 Jemas explains how he’d never publish something as lame as a grey, intelligent Hulk. I guess that’s a dig at Peter David? 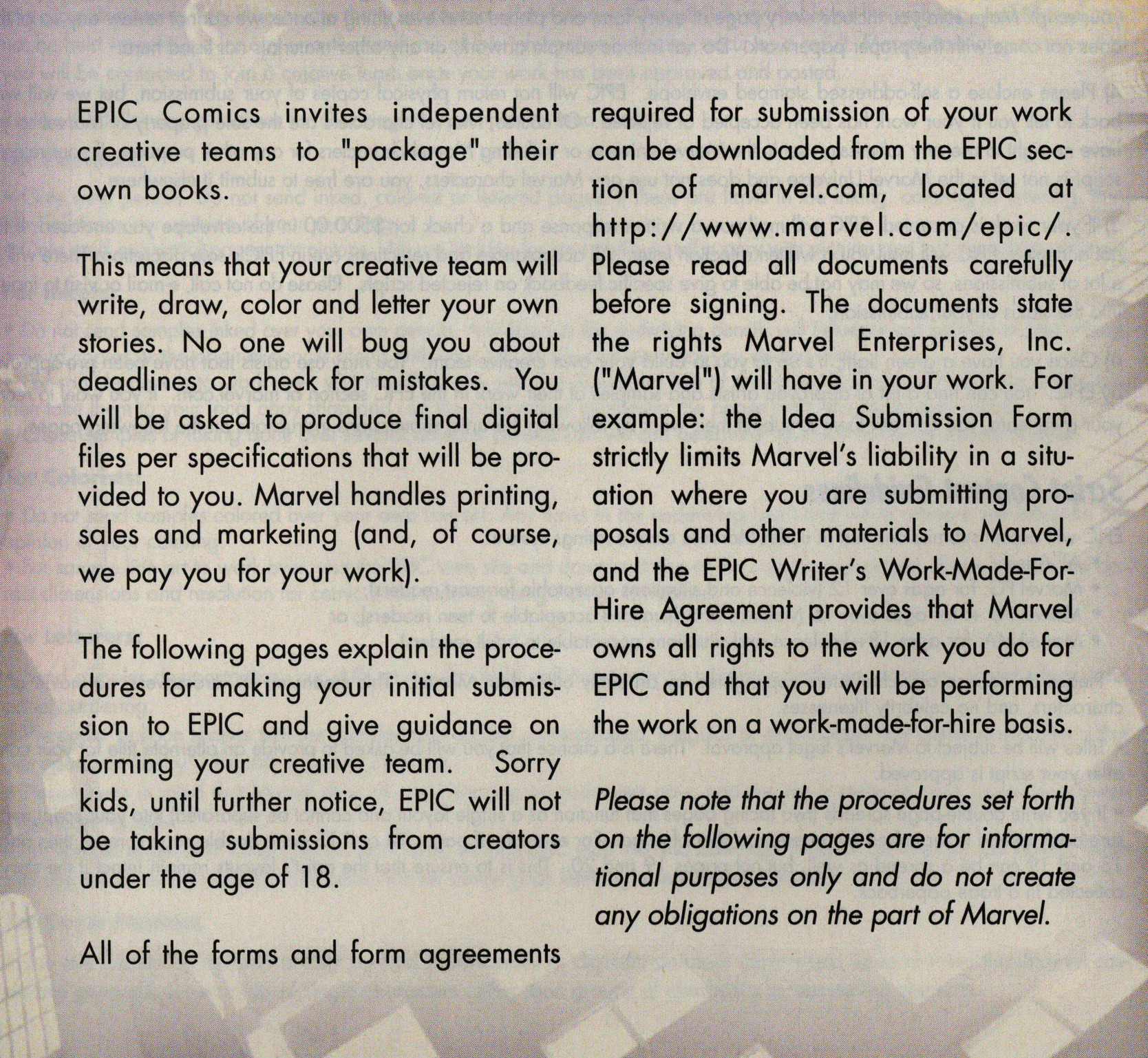 Ok… Epic is being set up as an entity where Marvel would do no work — they would accept (or reject) complete packages, and basically do the printing and selling. But Marvel owns everything: This iteration of Epic is not a creator-owned one, but it’s all work-for-hire? Geez. 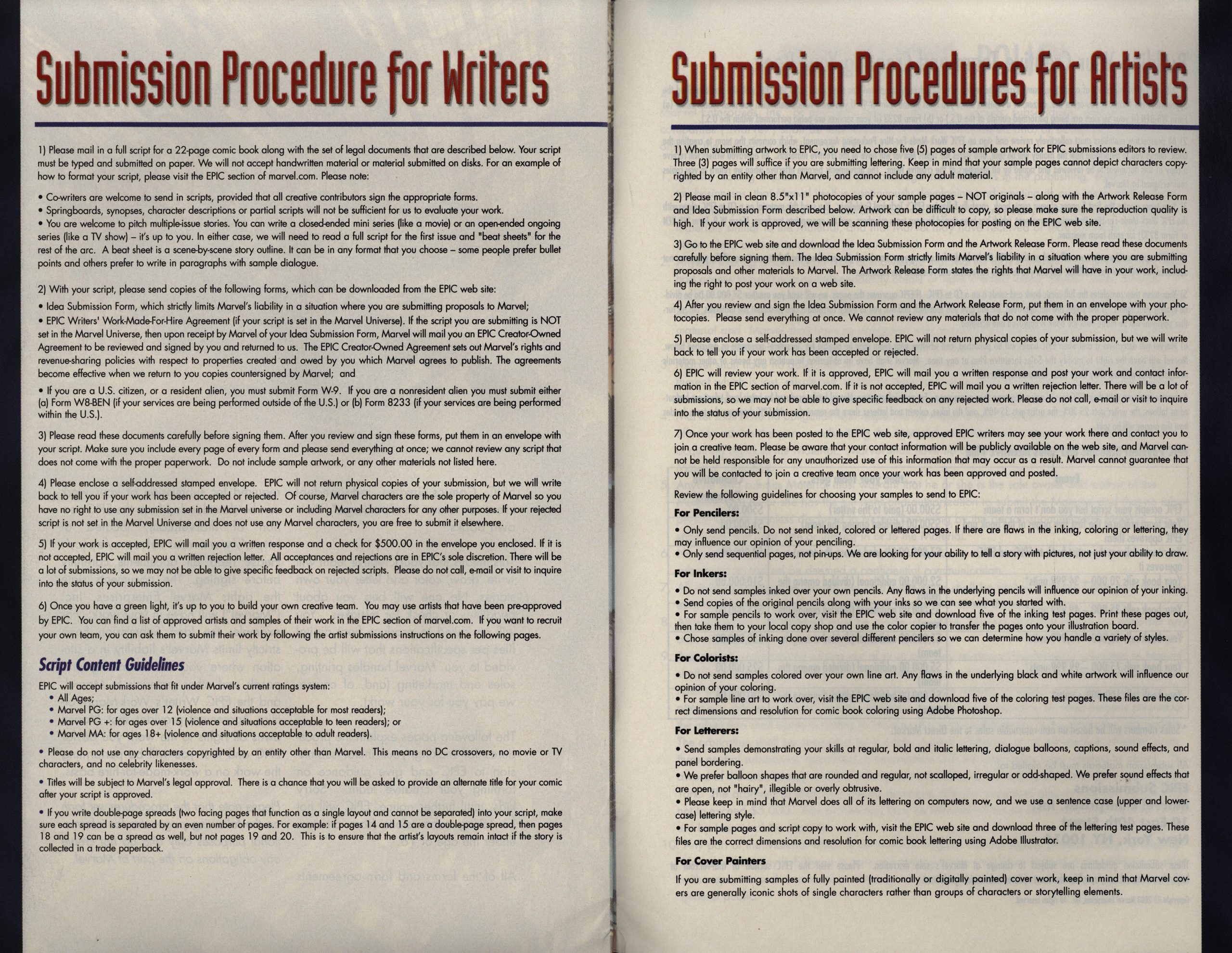 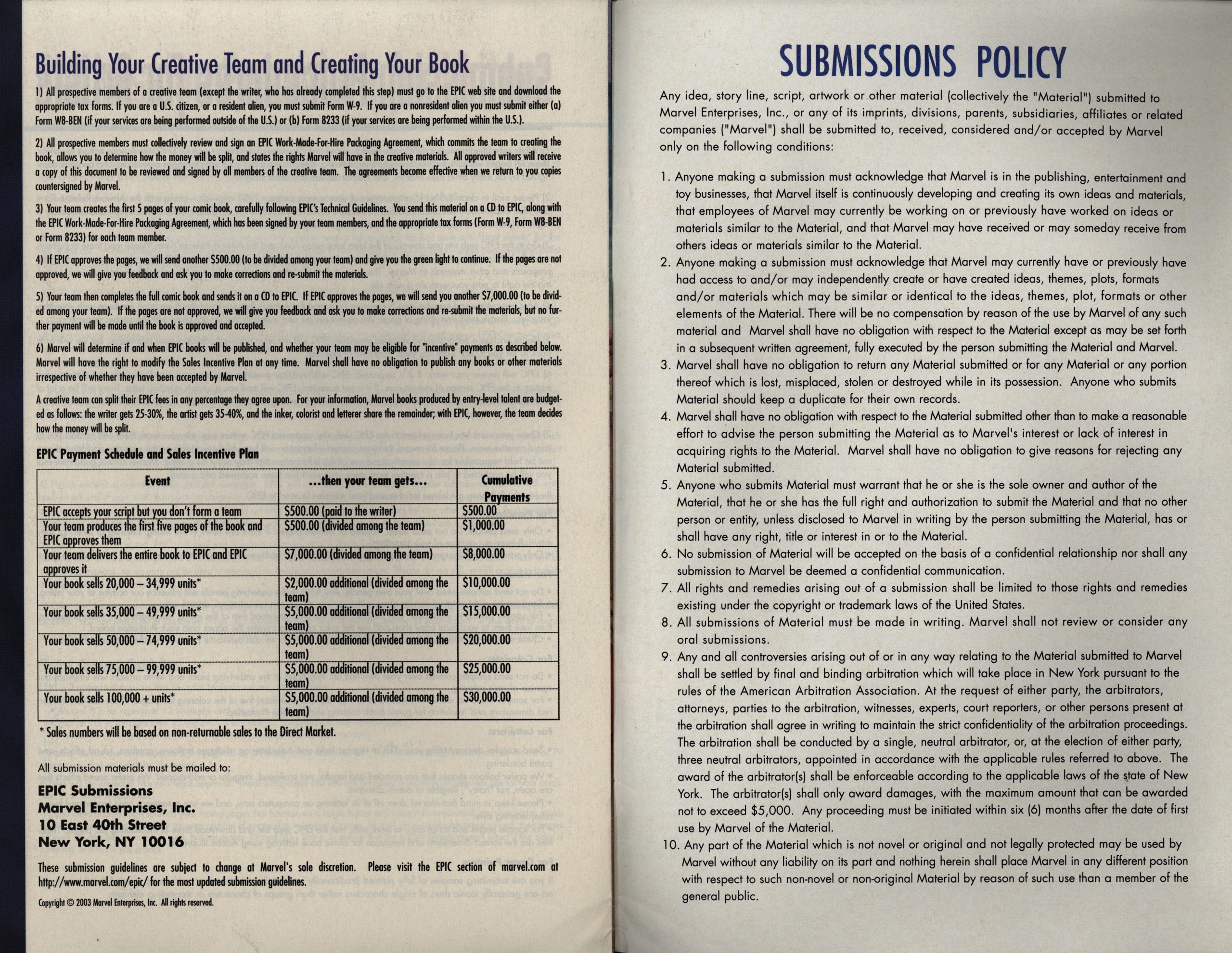 There’s even a payment schedule here!

How very strange. The other issues of Marville were apparently contained comics; only this issue was this oddball text thing.

Marville was created as part of Marvel’s U-Decide promotional campaign, in which fans would decide which of three books would survive. The event involved one existing book (Peter David’s Captain Marvel, whose numbering was restarted at issue #1) and two new books (Marville and Ron Zimmerman’s Ultimate Adventures), and was based around a bet between David and Jemas, of which Marvel editor-in-chief Joe Quesada later became a part.

If that bit was humour, is the entire pitch satire? Because it reads like that a lot of the time: I can’t tell whether Jemas’ rules for making good comics are sincere or whether he’s making fun of comic book nerds.

This guy tried to make sense of the Epic pitch and explain what it all means.

The series was written by Bill Jemas, and the stories involve satirical comments on comic book industry conventions and trends. The book is regularly considered one of the worst comics of all time due to its confusing and rapidly-changing plots as well as its blatantly promotional nature.

Sounds great; I’ll have to read the other issues some time.