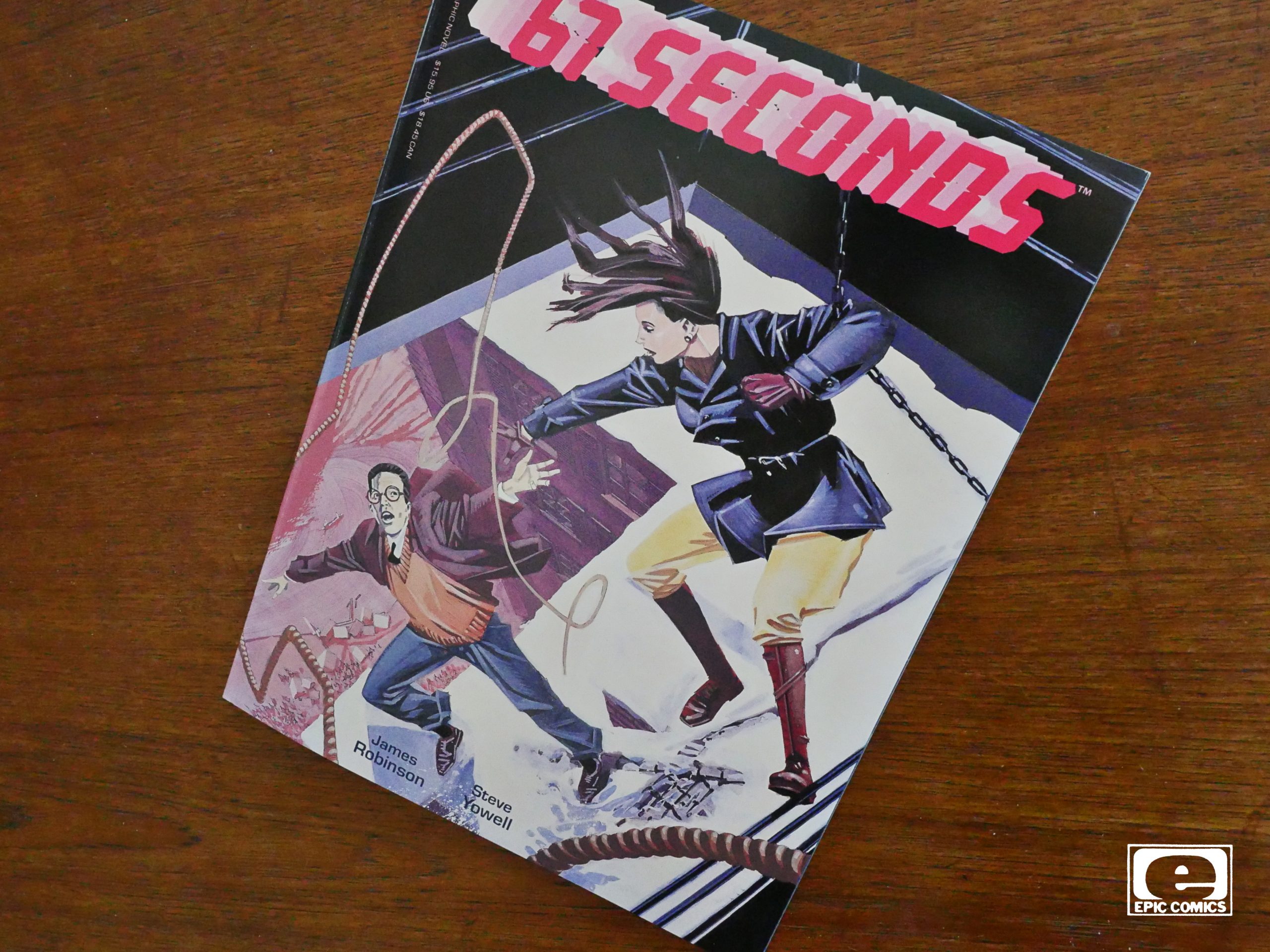 In its first few years, Epic published a bunch of things in “album” format, but this format had gone totally out of style in the US by 1992 — instead everything was “prestige format”.

So it’s something of an oddity that Epic then published two albums in 1992 — in the same month, even.

Did this come out of Marvel UK, perhaps? Steve Yeowell is British and Robinson had written stuff for the A1 anthology a couple years earlier… (By the way, Yeowell is spelled “Yowell” in the cover, and “Yoewell” on the credits page.) 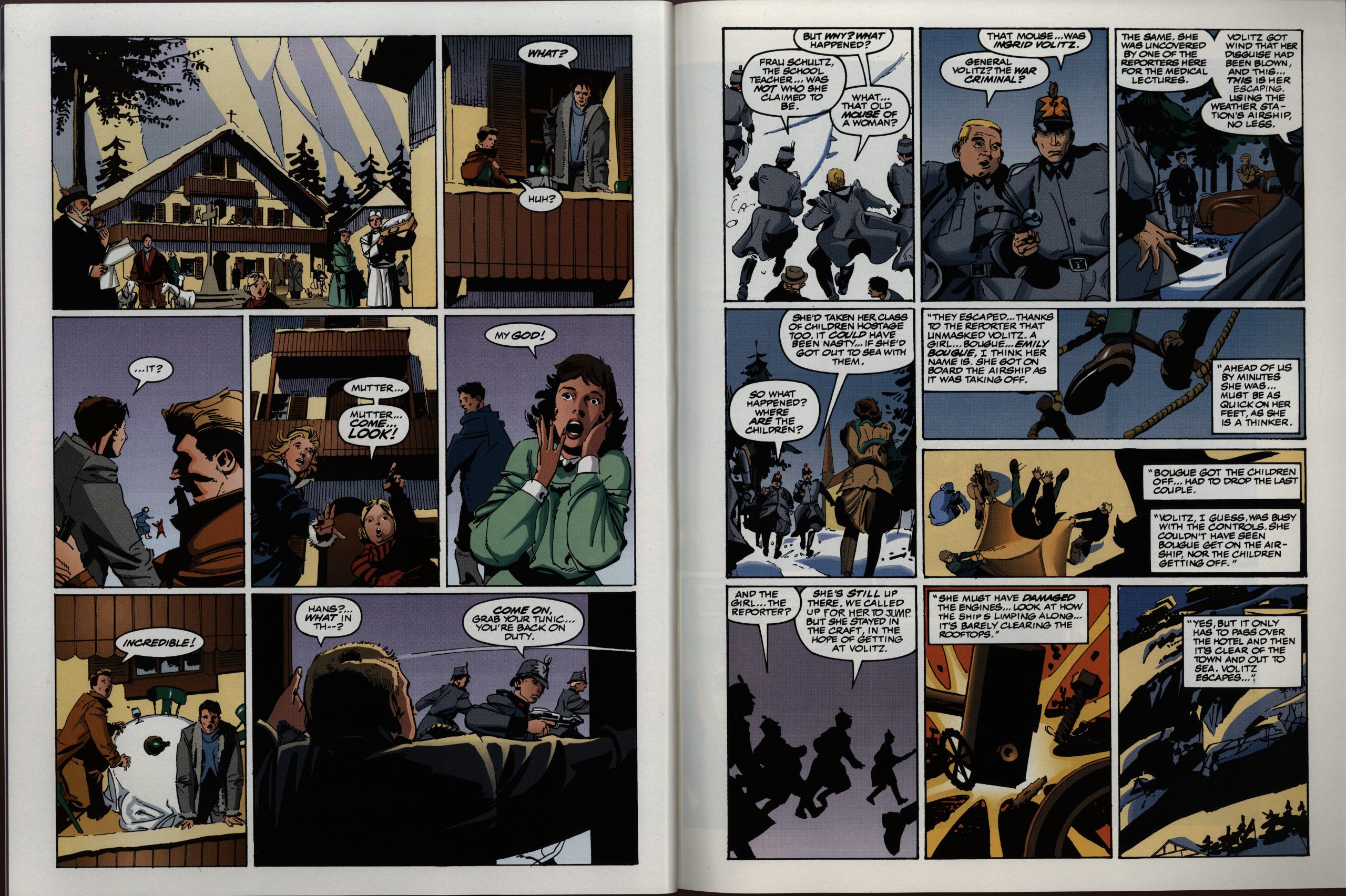 Anyway, this is a retrofuturistic story that starts out with a whole bunch of exposition (that ends up not really mattering much, because we get it all repeated later). 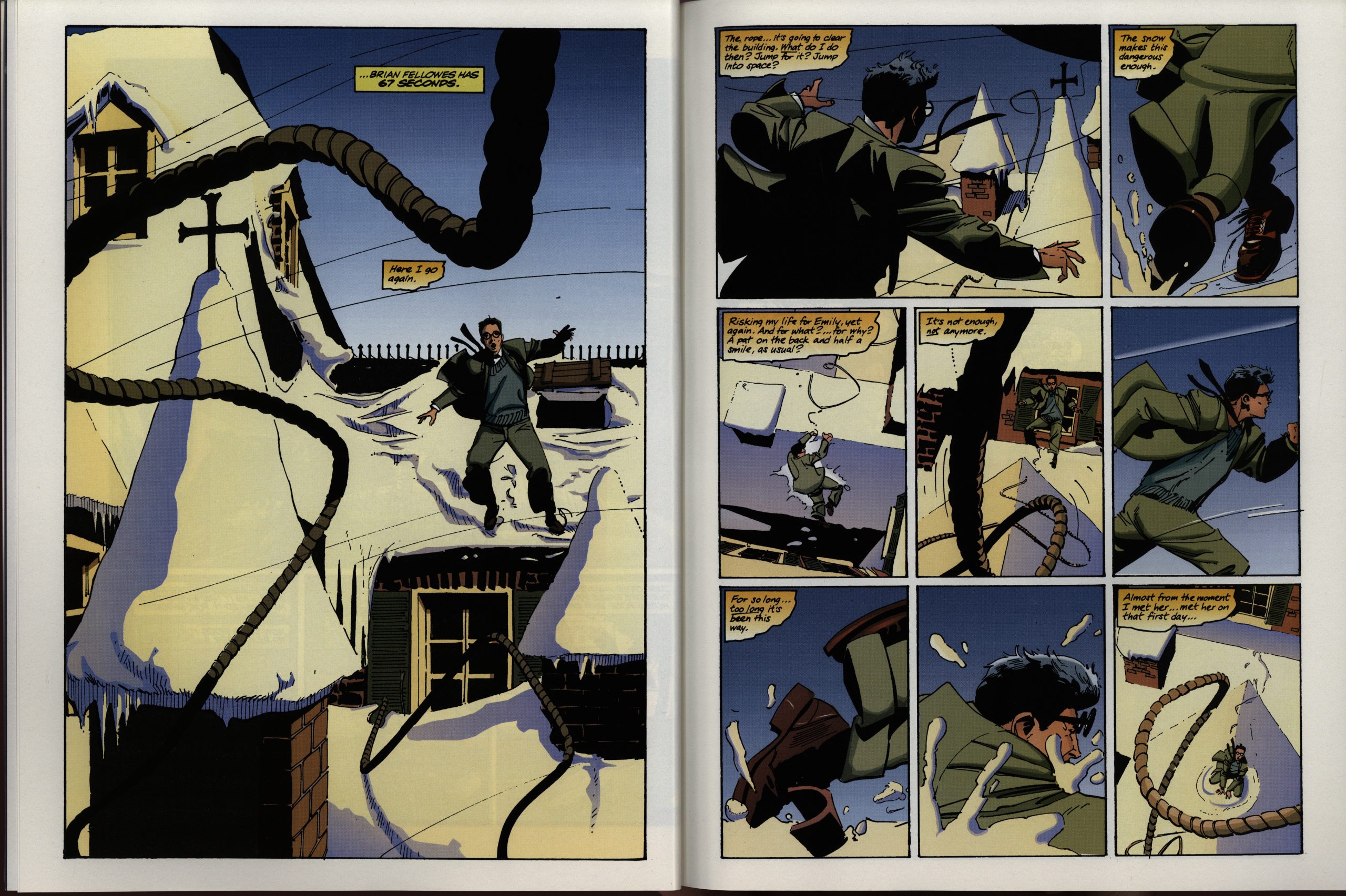 The titular “67 seconds” is the framing story, wherein the viewpoint character runs across these rooftops and has to decide whether to make a jump for that rope or not. The meat of the book is in the flashbacks, where we get his story, and how he ended up on that roof. It’s not a very original structure, but it’s not something that has been done to death, either, so I’m all aboard.

Yeowell’s storytelling is totally on point. He’s dynamic, but there’s never anything unclear about the action; he’s exciting, and his figures are perfect. That’s a really good sprint across a rooftop.

The worst drawing in this book is on the cover, unfortunately, which looks stiff and posed. 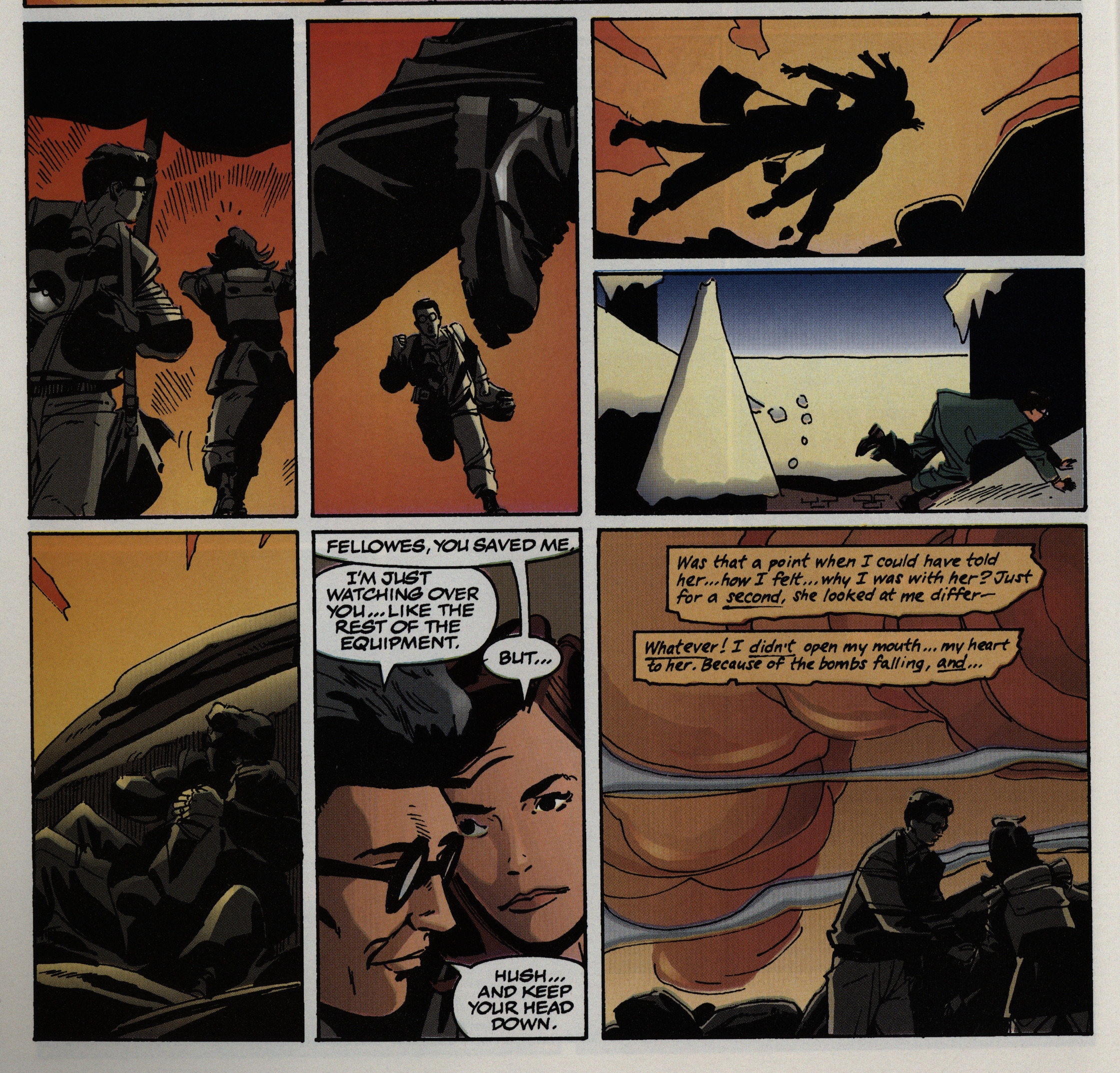 It’s just that the viewpoint character is such a drag.

We get to follow him and his manic un-pixie journalist semi-boss around on various sketchily delineated trips to war zones, and his entire thing is that old, tired “oh, I’m just the Nice Guy and that woman I so want to fuck doesn’t think I’m hot” (OK, that’s not how he expresses it; I’m slightly paraphrasing it). 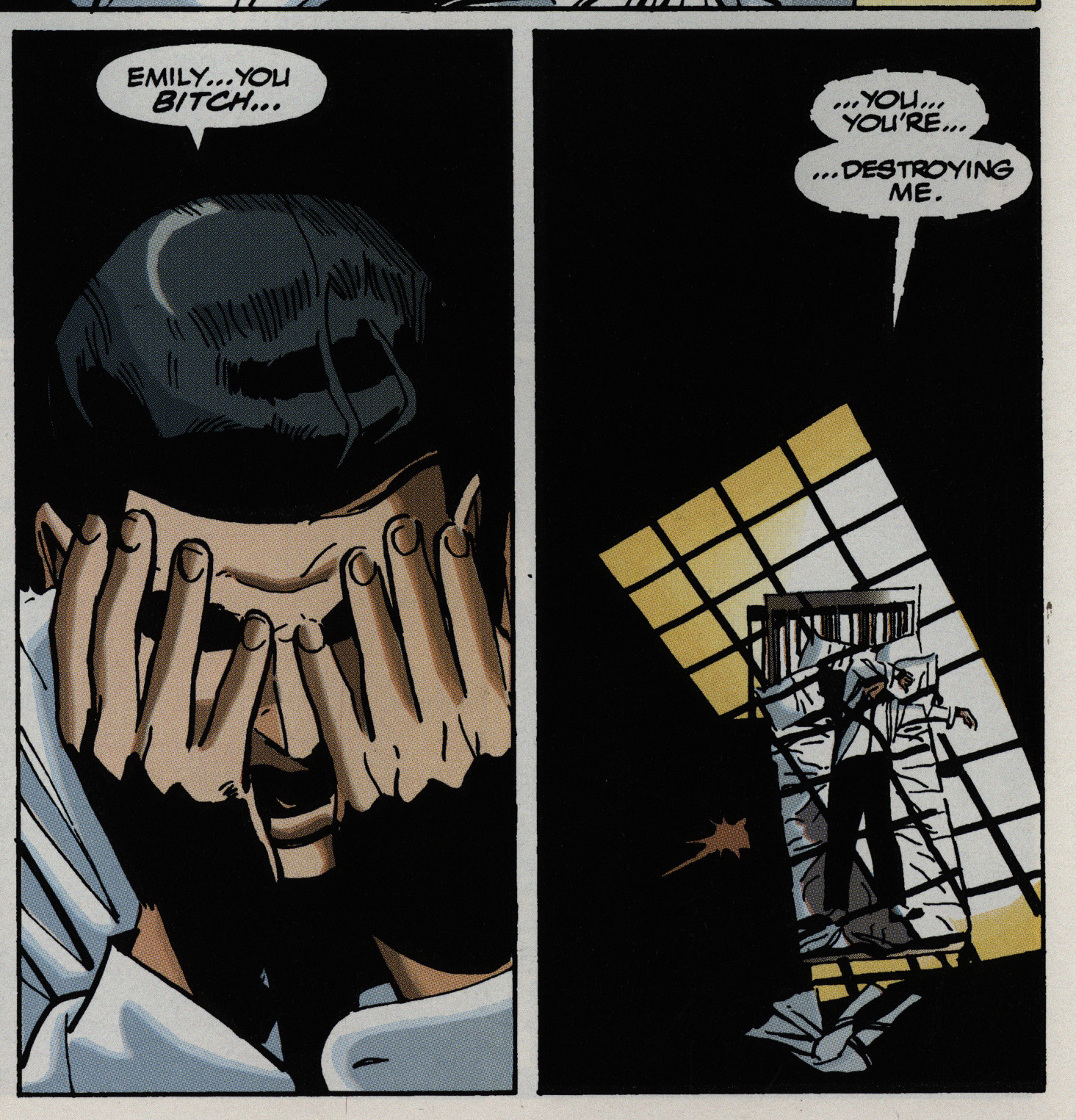 So she’s a bitch and he’s so sensitive.

It’s pretty disgusting and creepy, and that it turns out (PLOT SPOILERS) that unbeknown to him, she’s really totally into him, really, doesn’t help with the essential creepiness of the setup, with him pining away with his unrequited love, and generally stalkery behaviour: He pressures the editor into giving her no other photographer than him, for instance, so the he can continue to sniff around her.

Now, if this was supposed to be a critique of a deeply creepy guy, then Robinson did well, but I don’t really think so: We’re totally supposed to identify with him, and think that what he’s doing is the right thing to do.

This book has never been reprinted for some reason or other, but it fetches a premium on Ebay.

This guy liked it:

It is a great short story of love, adventure, devotion and danger.

So did this guy:

It’s astonishing that Marvel Comics, even under their more relaxed creator-owned Epic imprint, ever published what’s essentially a straightforward story of unrequited love. For the sake of appearance a few fantasy trappings are presented, but they’re minimal and largely irrelevant, although well conceived.